Alameda Ridge of NE Portland boasts 400 stairs spread out over 30 blocks, making for one heck of a workout. Here’s what to expect & more.

The Alameda Ridge is a geological feature that runs through six neighborhoods in Northeast Portland, Oregon. The area is notable for some 400 public stairs originally constructed at the turn of the 20th century, which have become a favorite attraction for walkers and runners.

In the interest of staying fit, staying close to home, and enjoying the summer weather in the waning days of Lori’s pregnancy, we’ve been having fun discovering new neighborhoods in and around Portland.

Along the way, we learned about Alameda Ridge and its network of stairs spread out over a few dozen blocks. Initially, I thought Lori might not be up for the challenge, given her condition and all. Of course, I was wrong about that.

It’s Sunday in Portland. The sun is shining. 1.5 million visitors are clogging the area’s highways, trails, and landmarks. And…your very pregnant wife is one day shy of her due date. So, what to do?

…Climb a crap load of stairs while trekking five miles across 50 city blocks, of course!

Trekking the Stairs of Portland’s Alameda Ridge: Our First-Hand Guide 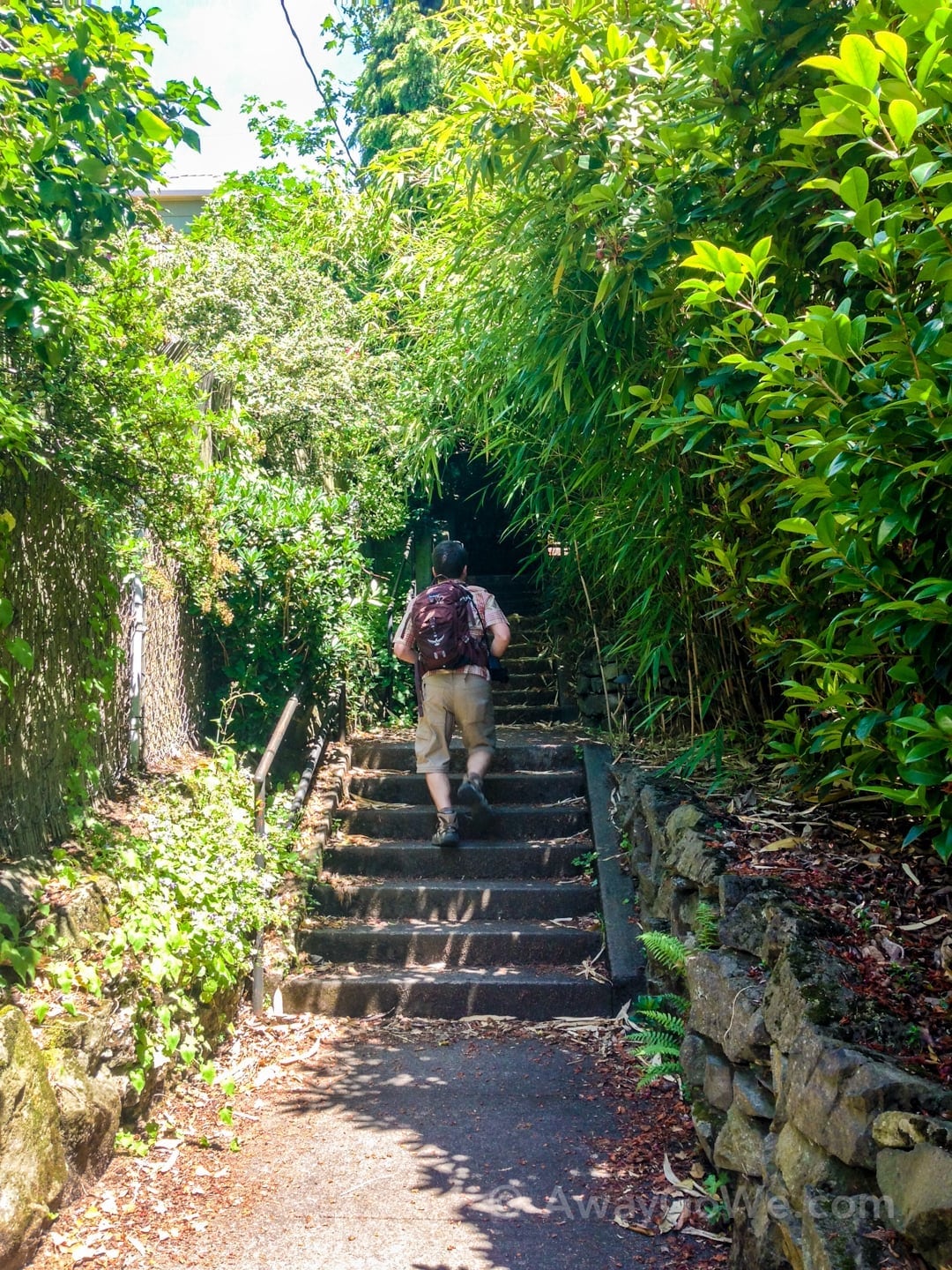 Alameda Ridge: Why So Many Freakin Stairs?

Lori finished her last day of work Thursday, so really we’re just in a holding pattern waiting for baby to decide to grace us with his/her presence. Tomorrow (June 13th) is the official due date, but I’ve had a strange feeling all along that this kid’s going to take his/her time.

The weather today ended up being a lot nicer than we expected, and Lori was feeling freakishly energetic for her situation. We knew that the Portland area would be crazy with over a million people visiting for Oregon’s biggest event of the year–the Rose Festival–so that meant that a lot of our favorite outdoor destinations would be out of the question.

Luckily, I happened upon a 2010 Oregonian article detailing 10 somewhat obscure urban walkabouts. The one we chose boasted 400 combined stair-steps scattered along a ridge cutting through the Rose City, Alameda, and Beaumont-Wilshire neighborhoods (among others).

The area encompassing Alameda Ridge is a quirky enclave of historic Tudor, Spanish and contemporary style homes that deviates significantly from the grid system encompassing it, following the unique geographic contours of the ridge.

As a result, several seemingly hidden public staircases have been constructed to connect the various parts of the neighborhood. It’s like no other neighborhood in Portland we’ve been to.

So why so many stairs and why here?

Well, that seems to stem from two main factors: The geology of the area and the timeframe in which it was originally developed.

As the city of Portland’s gridded street layout rapidly expanded eastward at the beginning of the 20th century, Alameda Ridge posed a challenge. Simply wrapping the grid around the six-mile long rise posed a number of challenges, particularly in a time when most people got around primarily on foot.

So, the City of Portland went about constructing some 400 stairs to connect the half dozen neighborhoods being developed along the ridge, and remains the authority maintaining the steps to this day.

Owing to the sweeping views offered by the sudden elevation rise on Alameda Ridge, the area became home to some of the city’s wealthiest individuals, which is reflected in the numerous stately historic residences you’re also bound to encounter along the ridge.

There are a million different ways you can experience the Alameda Ridge stairs of Portland.

We roughly followed what seems to be one of the more common tracks, beginning and ending at Laurelwood Public House [map], on the far southeastern edge of the ridge.

Beginning our trek at Laurelwood Pub had the two-fold benefit of providing easy access to the track from NE Sandy Blvd., and offering the promise of a nice reward for our efforts in the shape of a delicious local pint (for me) and tasty lunch for the two of us.

From there, the route heads in a general northwest direction, covering roughly 26 blocks going west from NE 50th Ave to NE 24th Ave, and about 10 blocks going north.

The most common turnaround point is the Thomas J. Autzen House [map].

We covered the 5.5 miles route in just under three hours going at a very leisurely pace (with multiple bathroom (i.e. port-a-potty) breaks for the preggo).

As of July 2020, the City of Portland website now has a detailed map with step-by-step instructions for following the route. 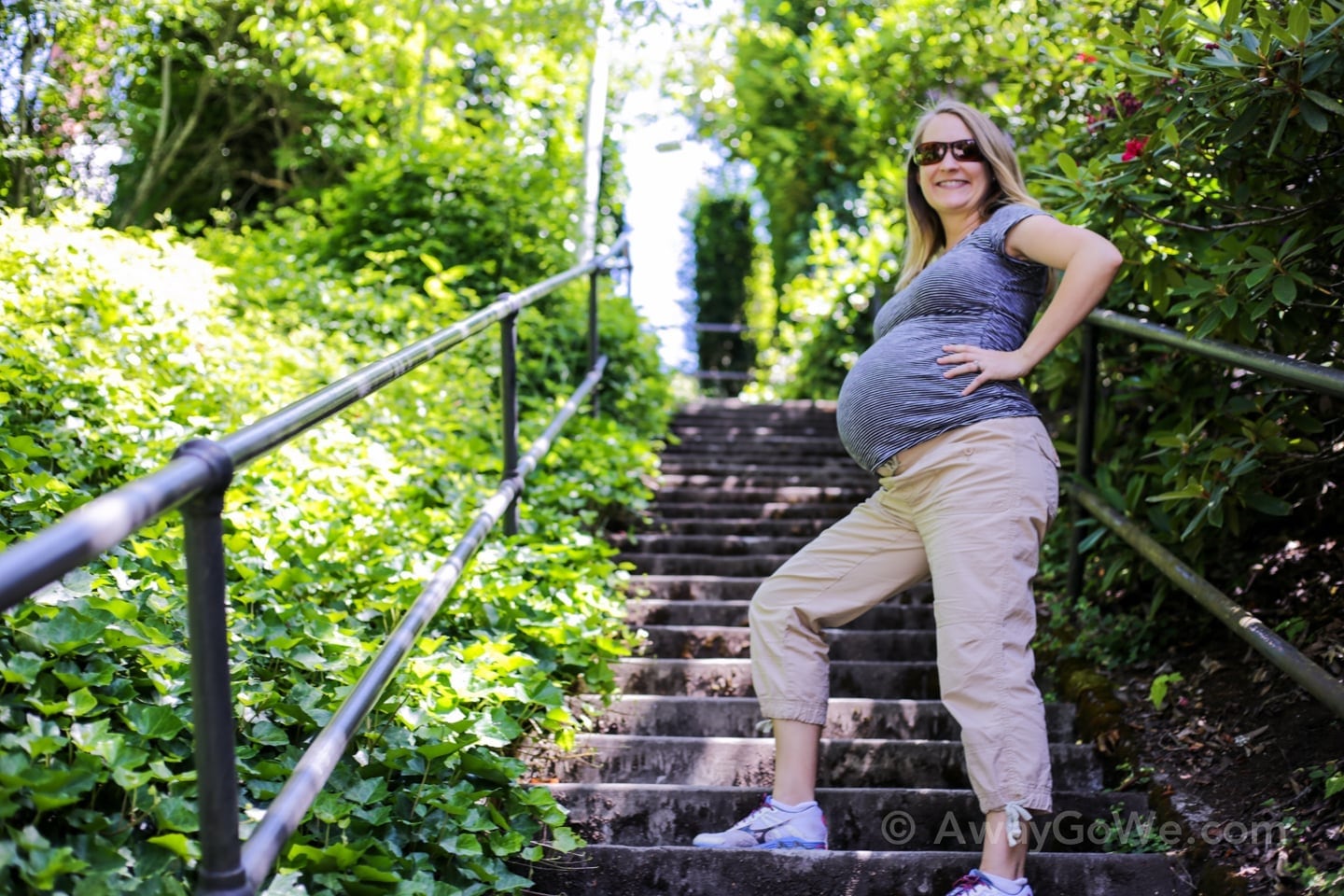 Here are some highlights from our first-hand experience doing the Alameda Ridge stairs route in NE Portland. 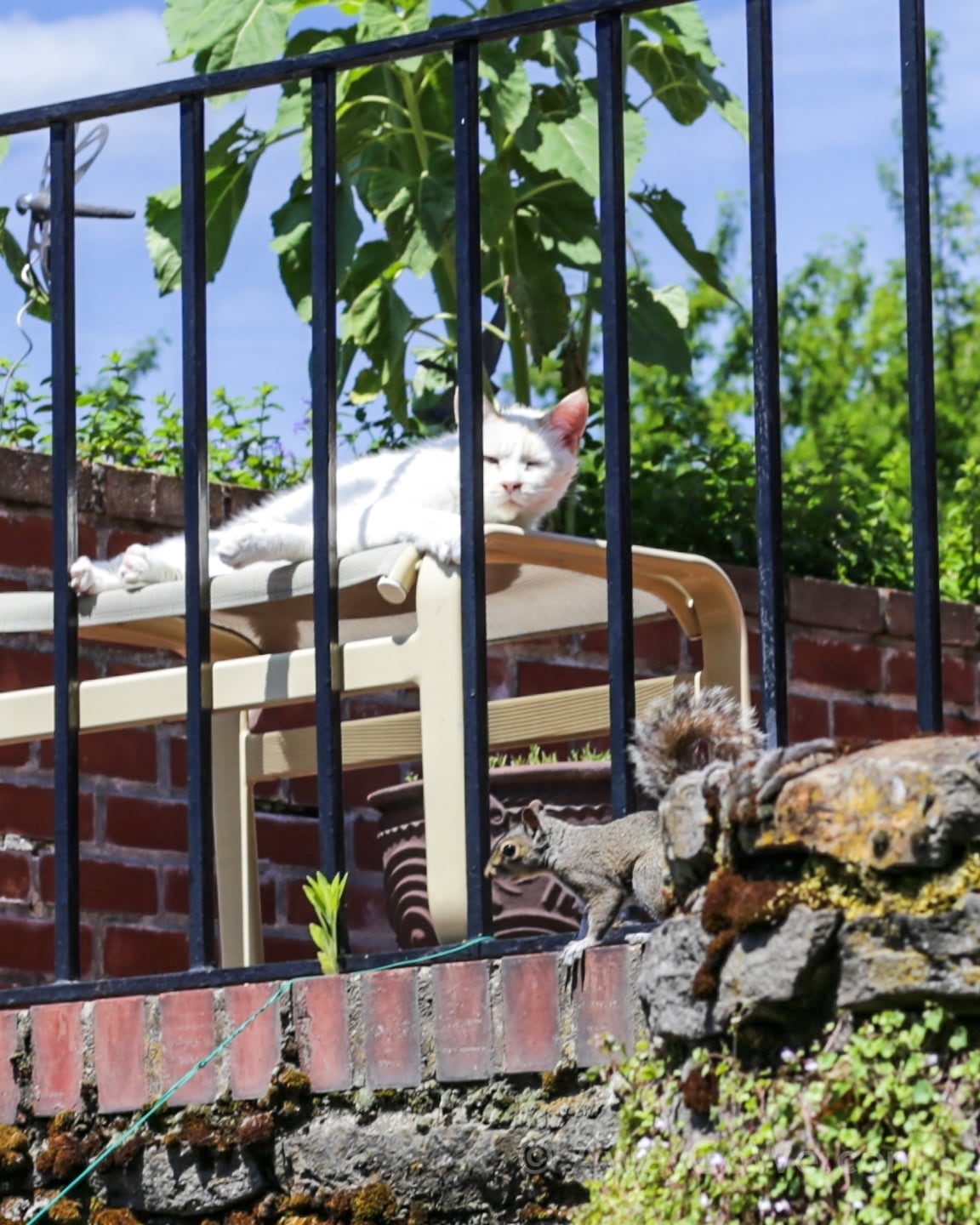 This lazy cat was barely fazed by the squirrel only a couple of feet away.

Apparently, it had far better things to do with its time than chase the nutty little rodent around, and it showed. 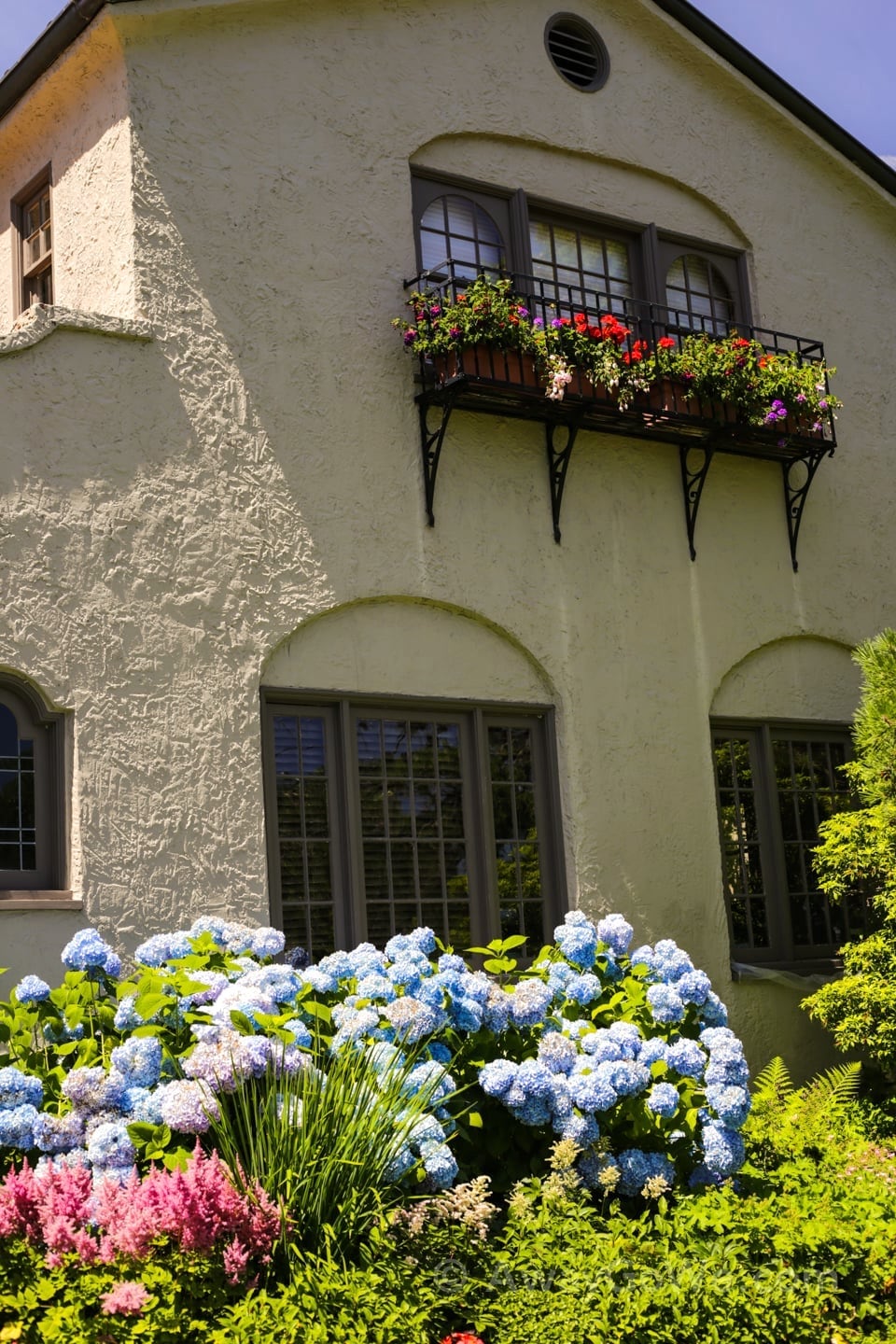 Large and beautiful houses and estates are prominent fixtures along the route. Here in mid-June, we had the added bonus of seeing the many lush and ornate gardens in full bloom as well.

Lori proved she can still knock out five miles at full-term. But that doesn’t mean that nature didn’t call every 5-10 minutes.

Luckily for us, there was a lot of renovation going on in these here parts–and where’s there’s construction, there are Honey Buckets! 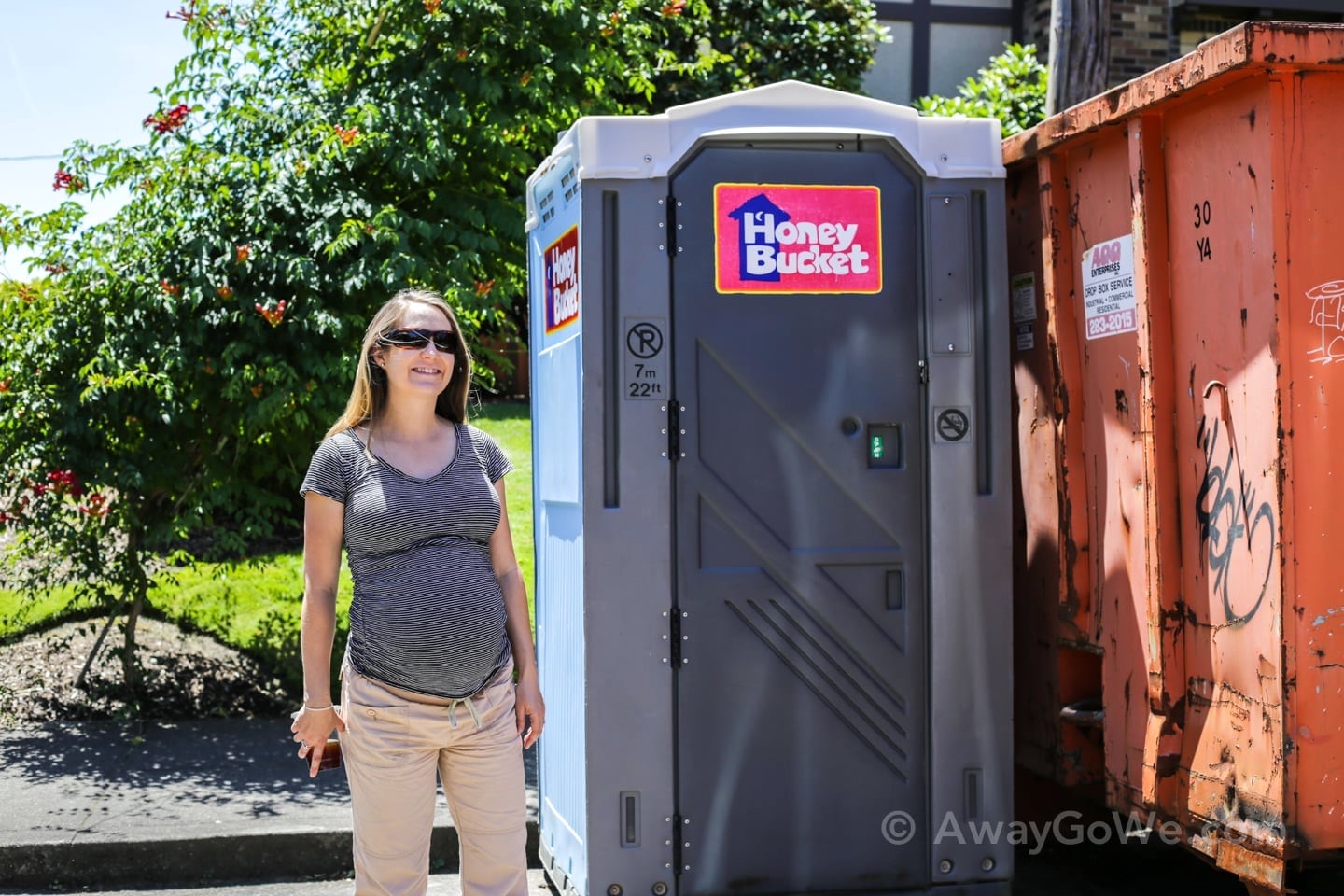 Out of the six or seven that we spotted along the route, we utilized three or four, which isn’t bad for a preggo on a three-hour hike.

In addition to port-a-potties, we also spotted several of these “Little Free Libraries.” 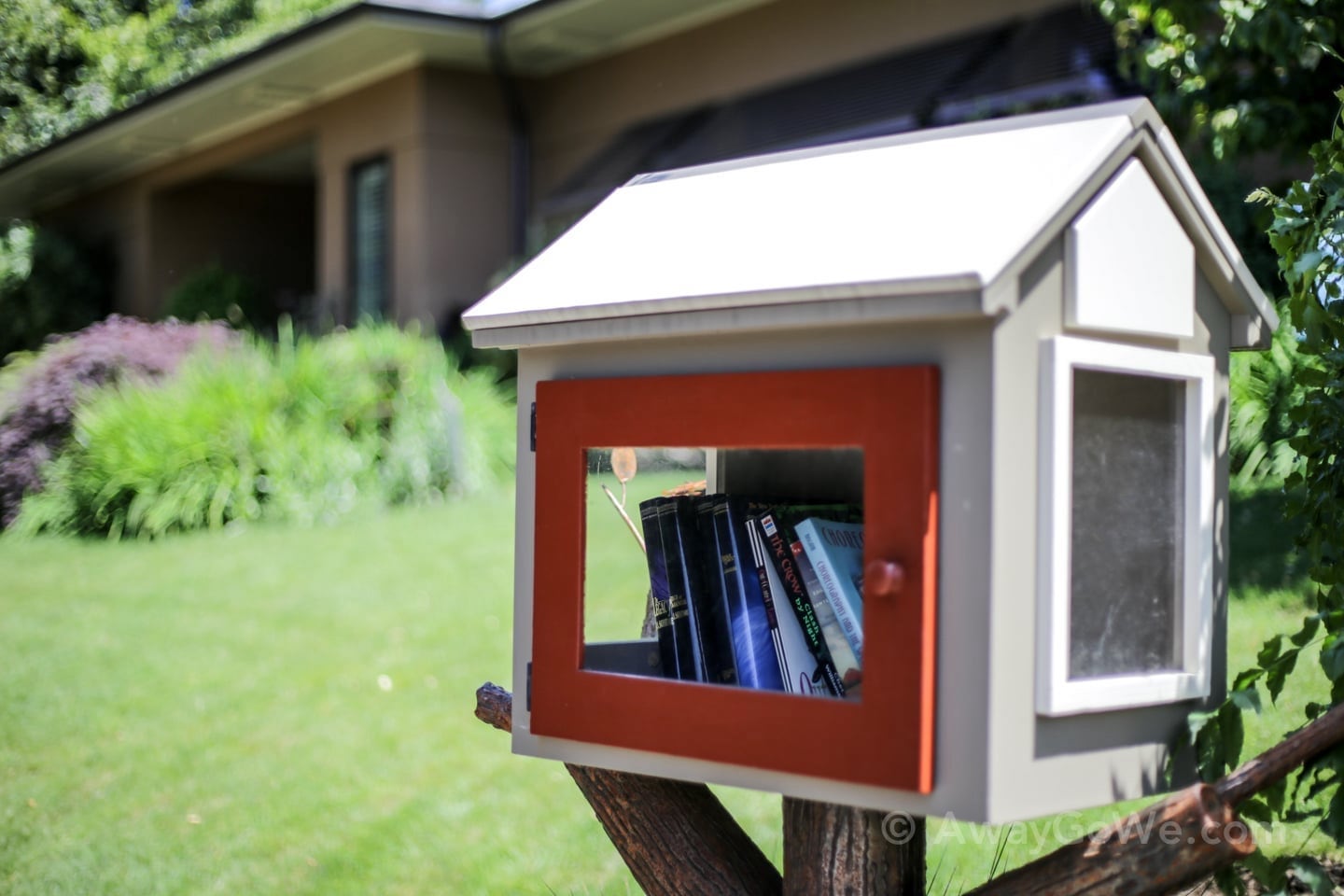 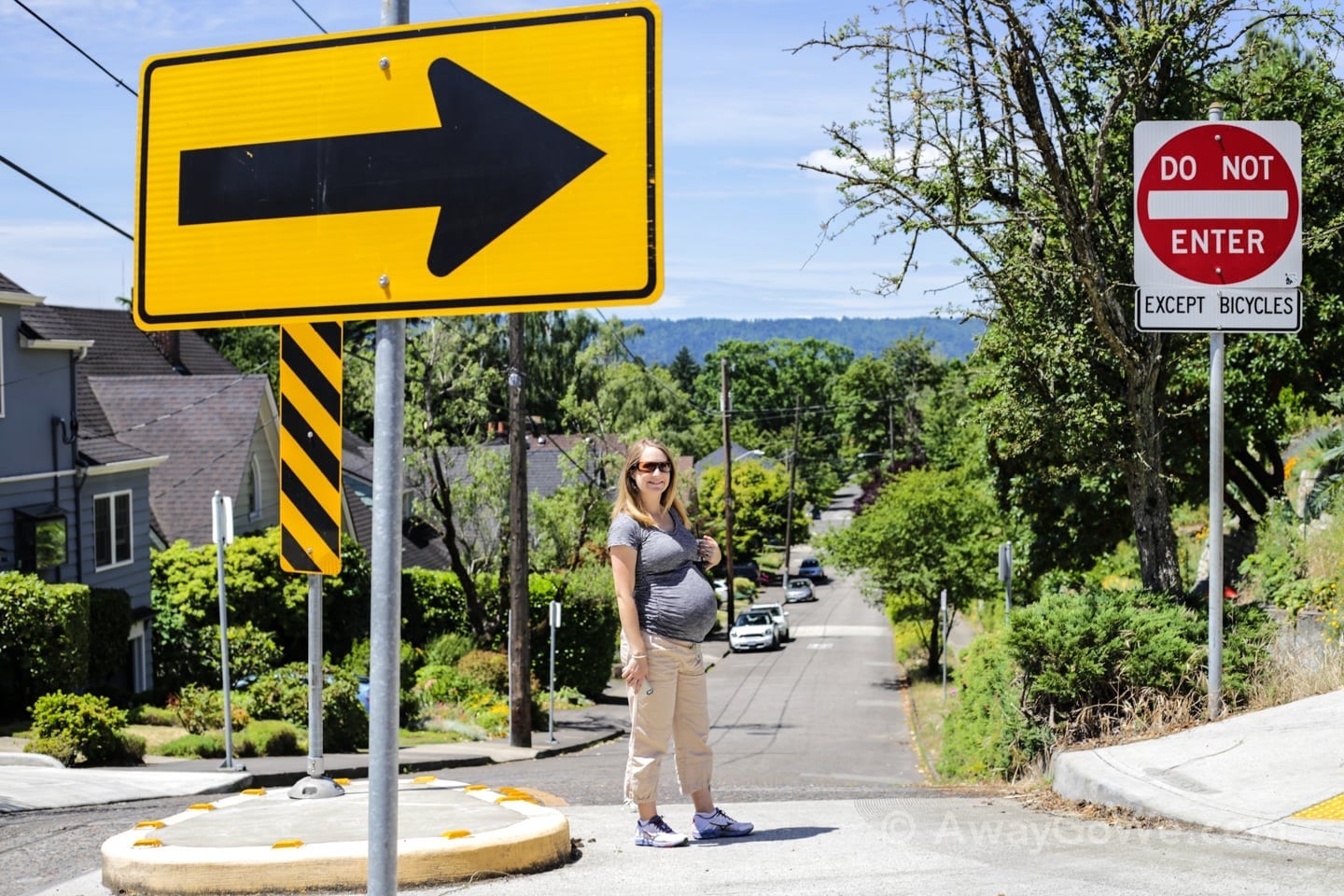 Stands of bamboo are a common feature lining many of the public staircases. 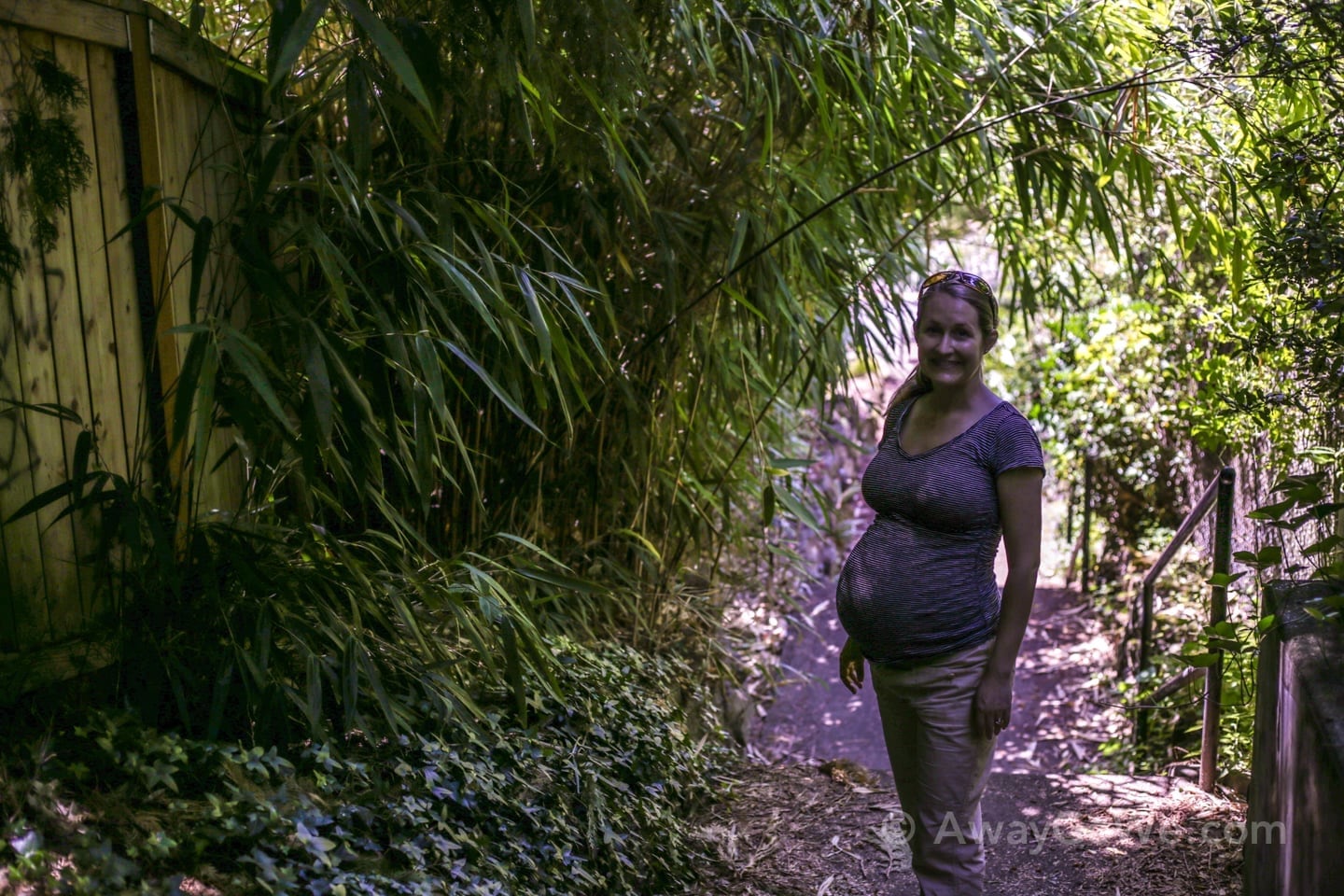 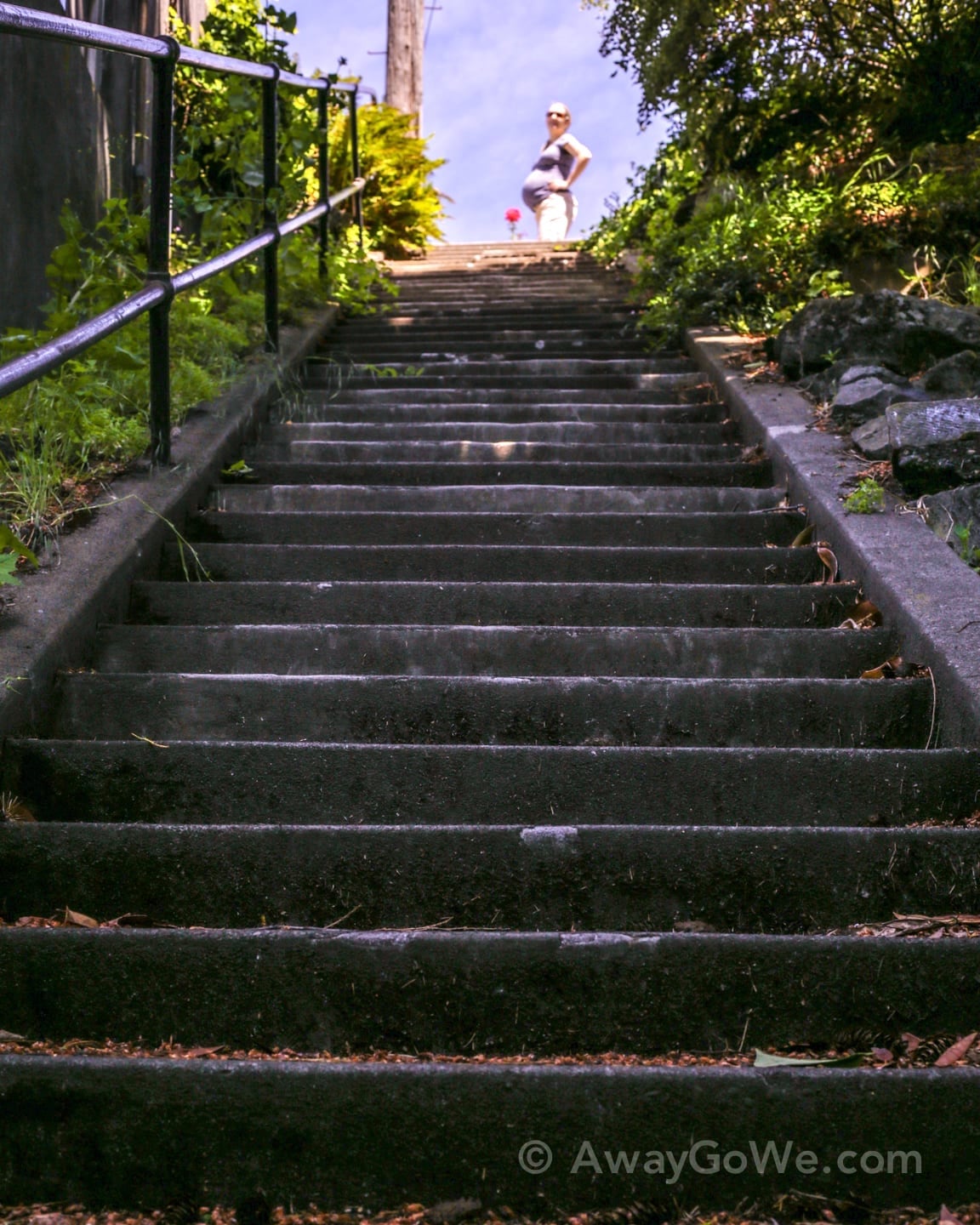 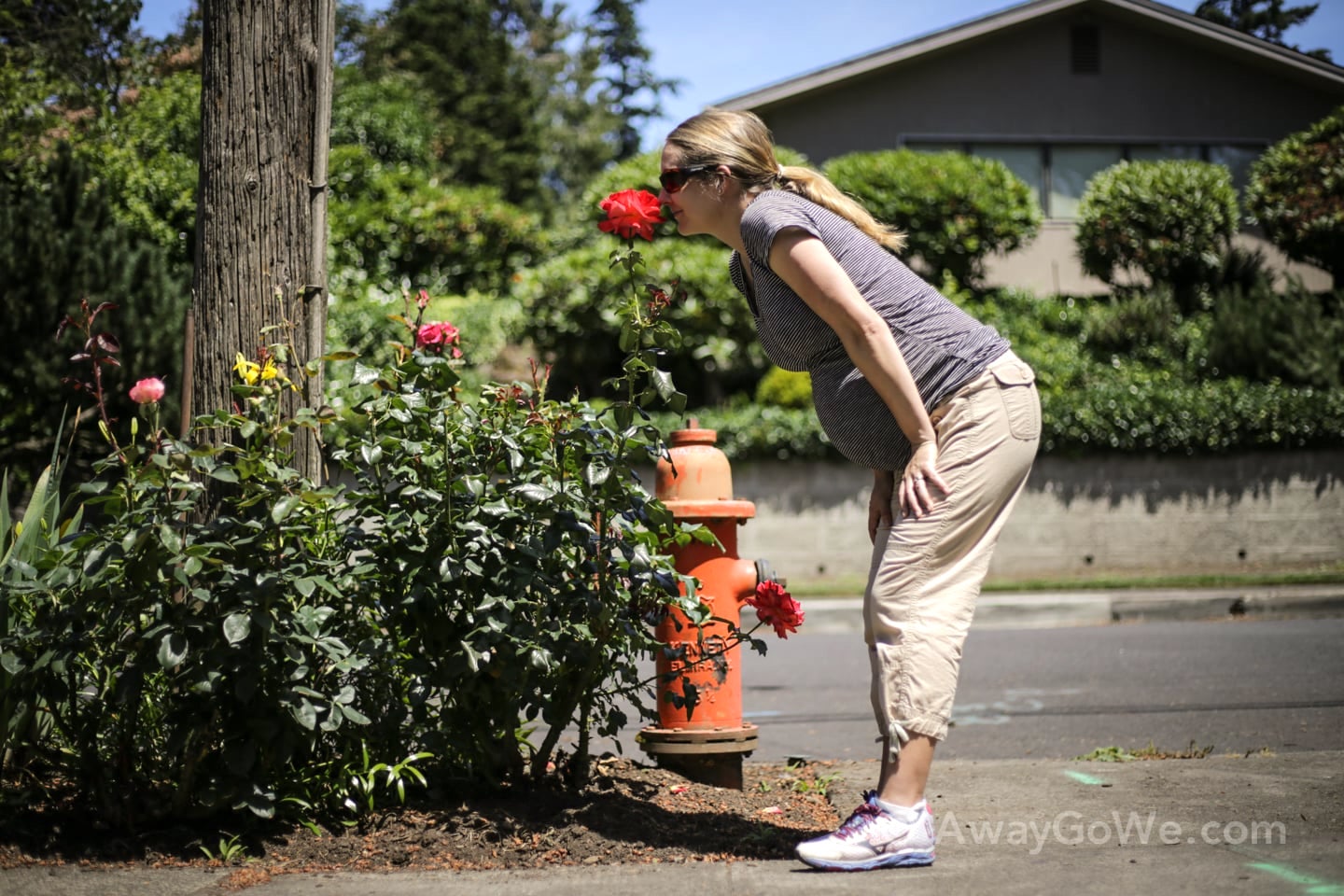 Another Honey Bucket to the rescue! 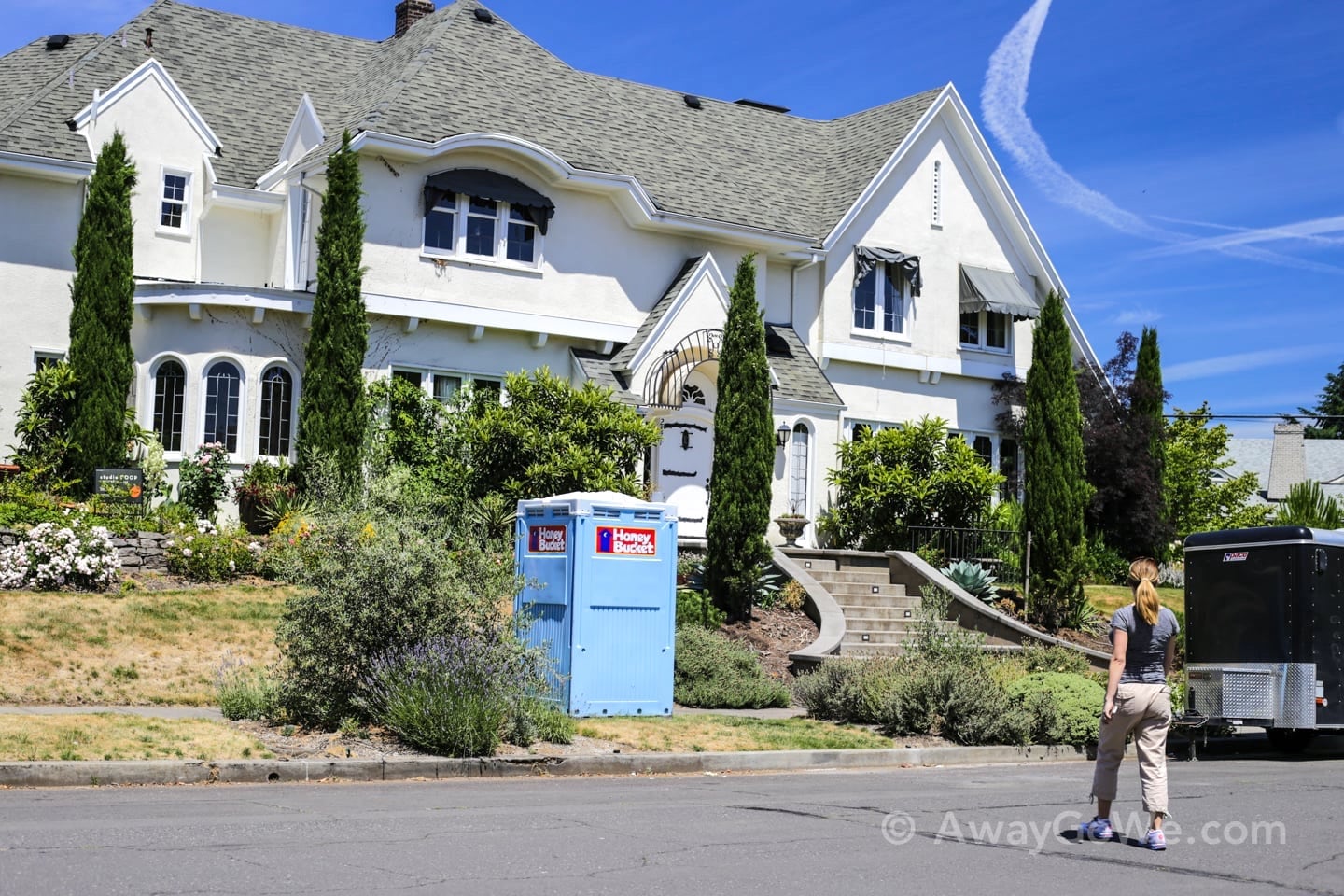 Or at least we thought. Lori was very surprised to find that this one was already occupied when she approached it and knocked on the door. Apparently we weren’t the only ones in the neighborhood with the idea. 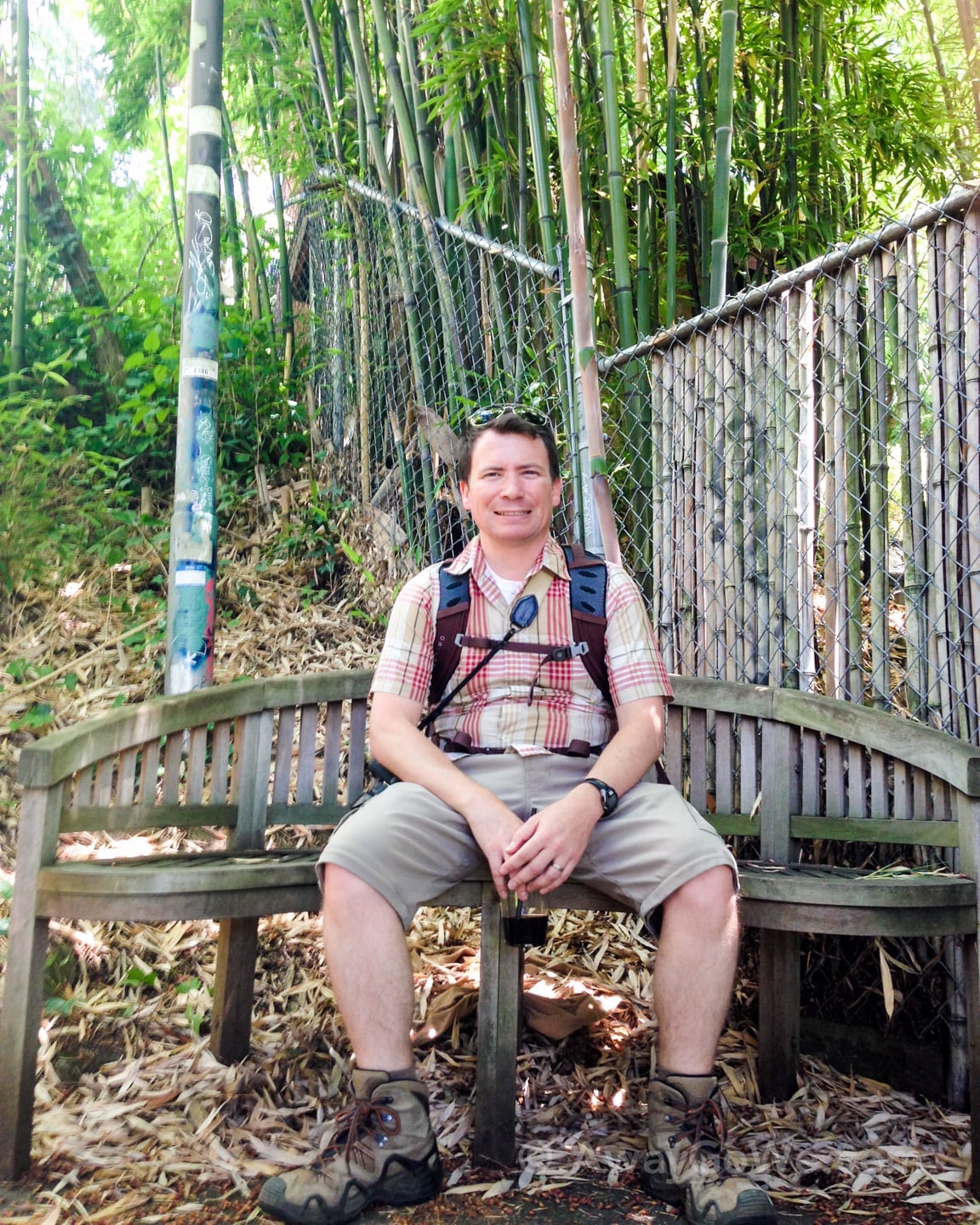 A park bench on the landing of one of the longer sets of stairs — a very welcome discovery for both of us. 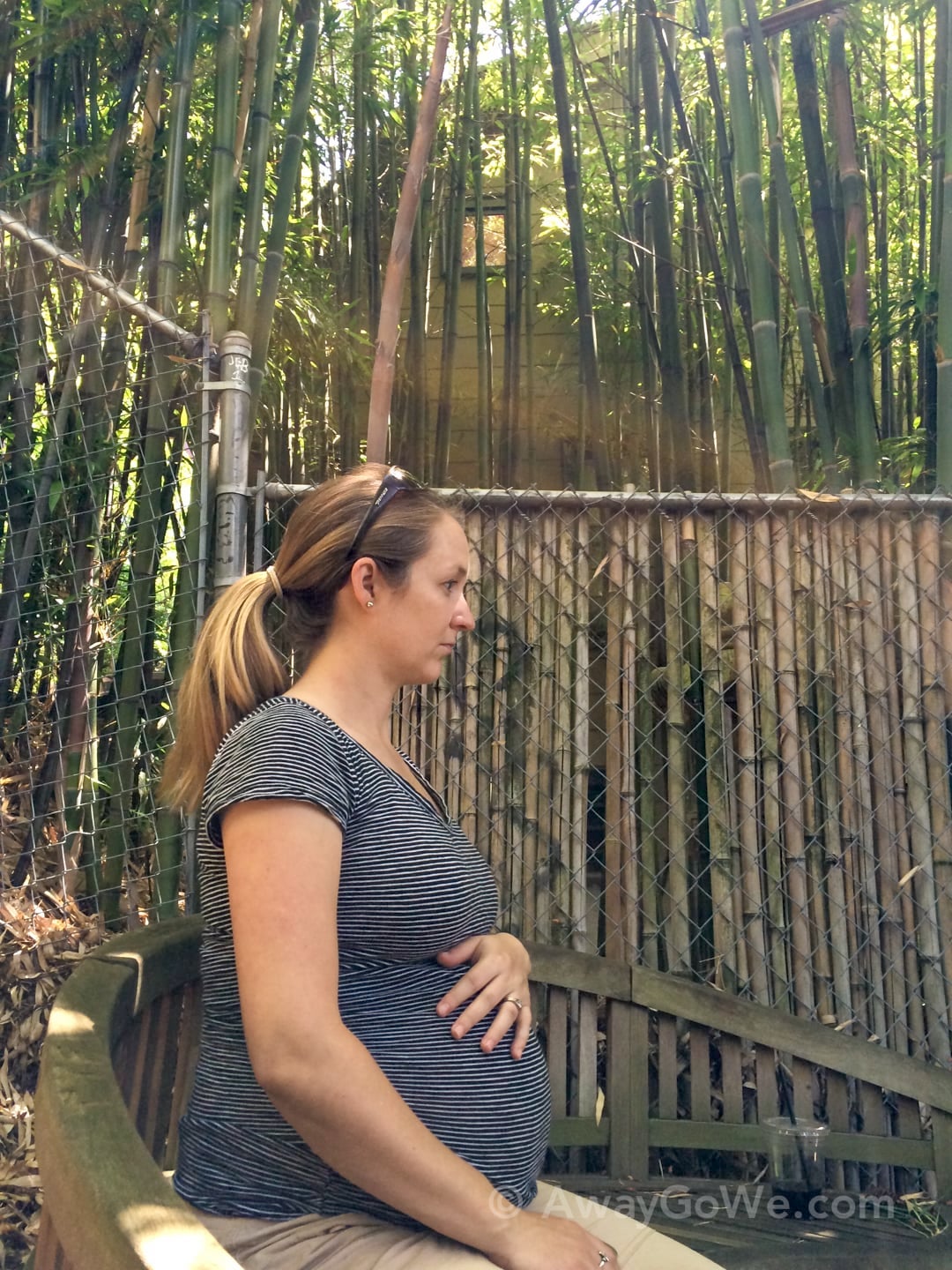 Booking.com is a trusted partner of AwayGoWe Travel Blog 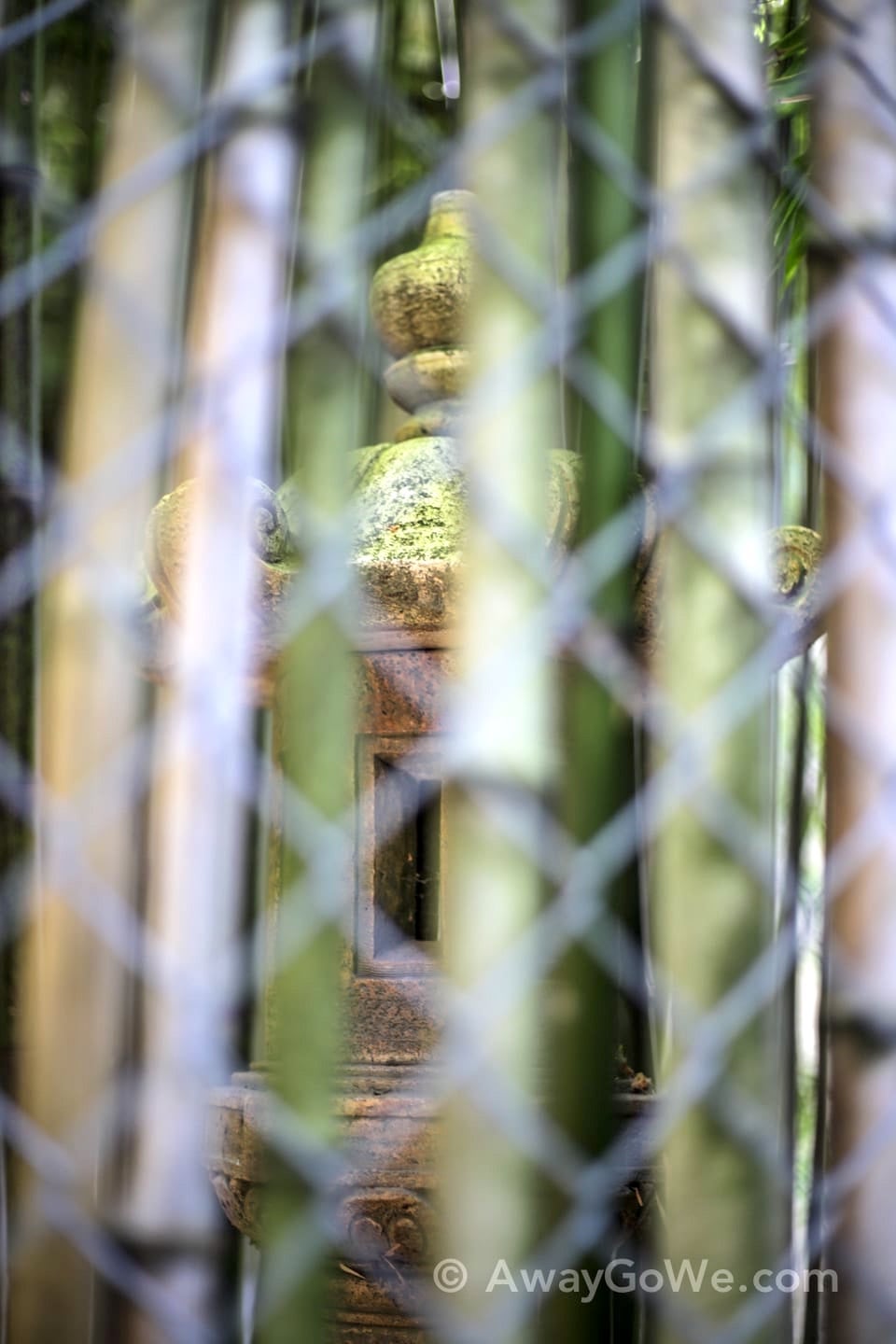 Hidden mysteries beyond the fence. 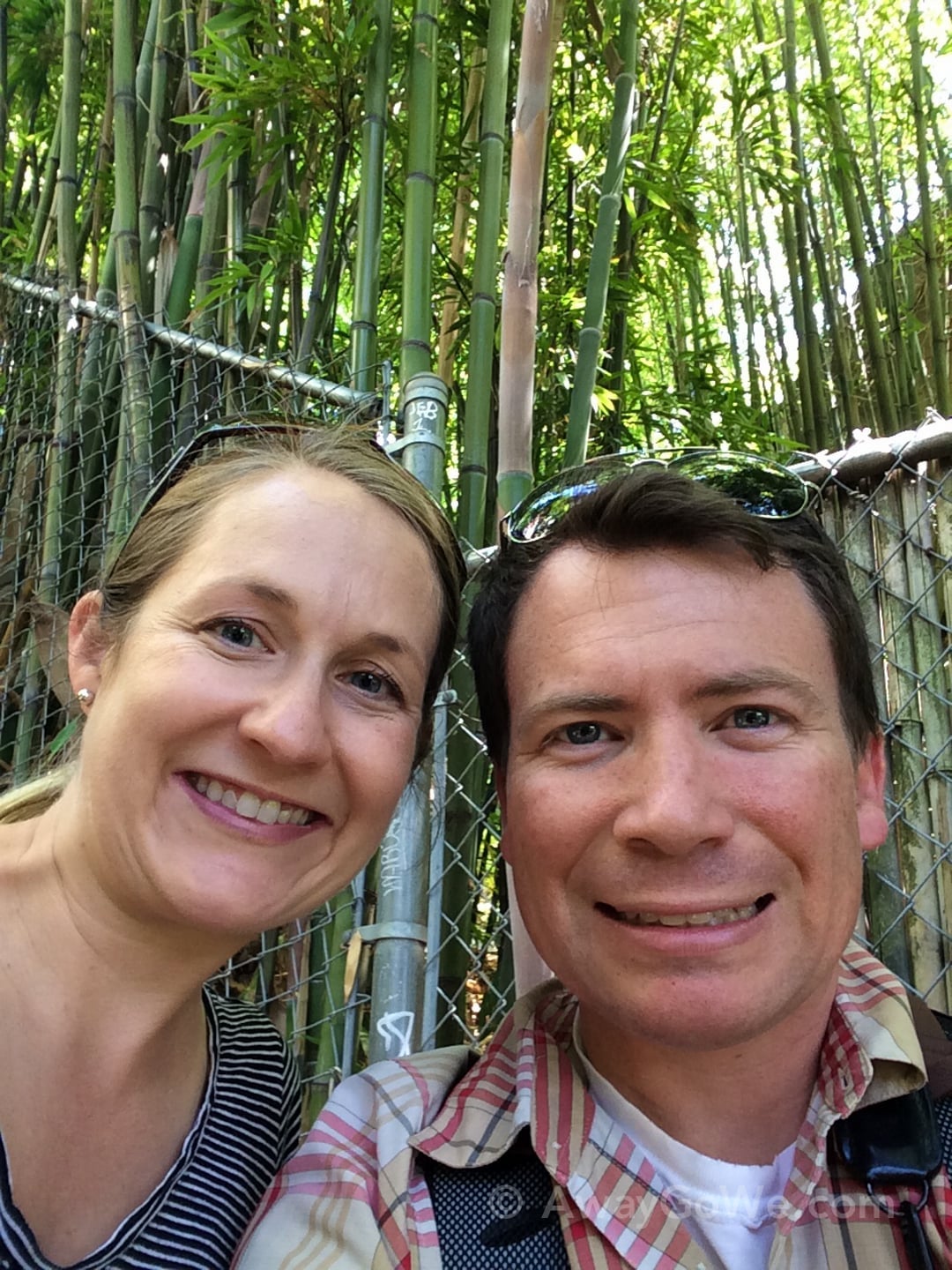 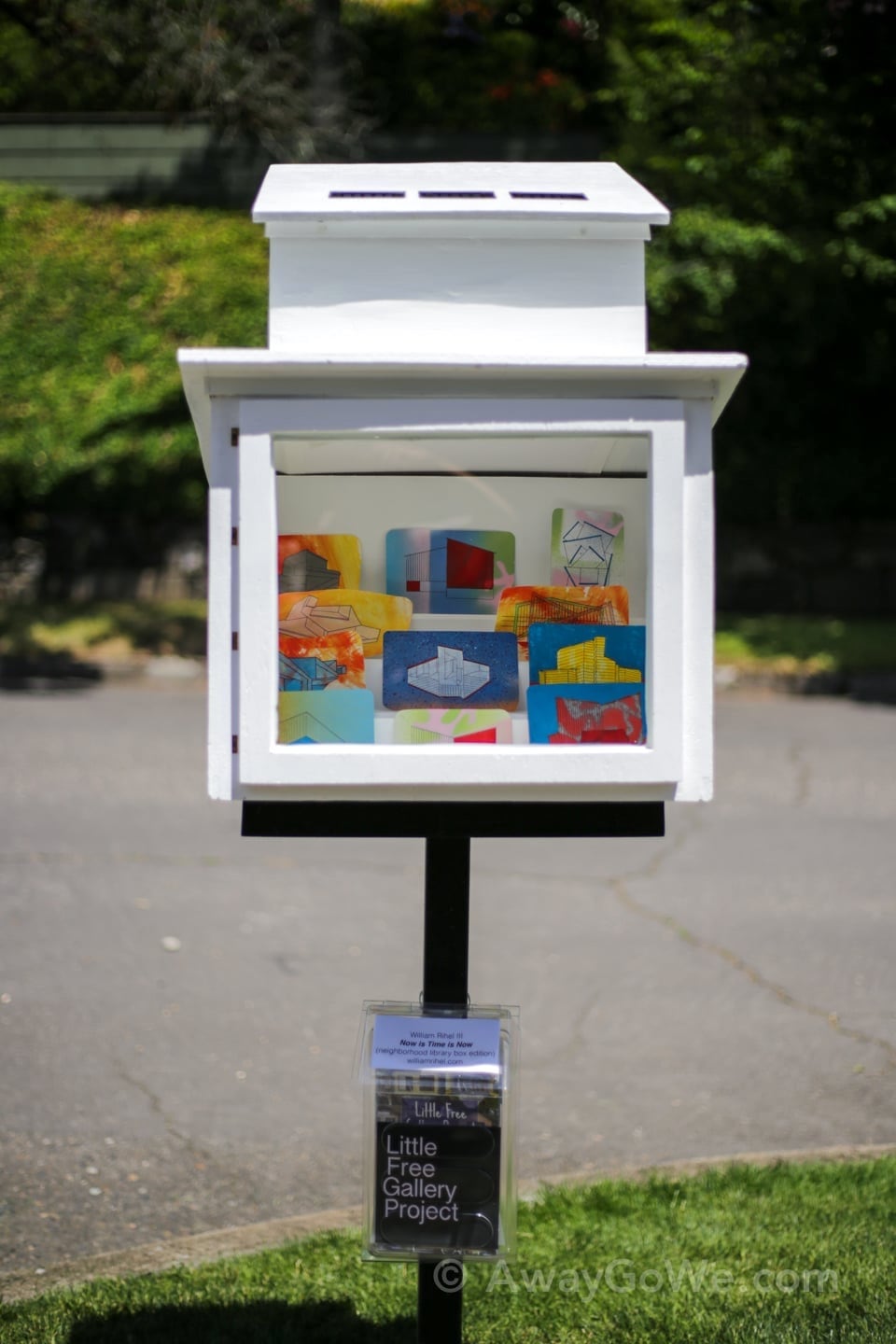 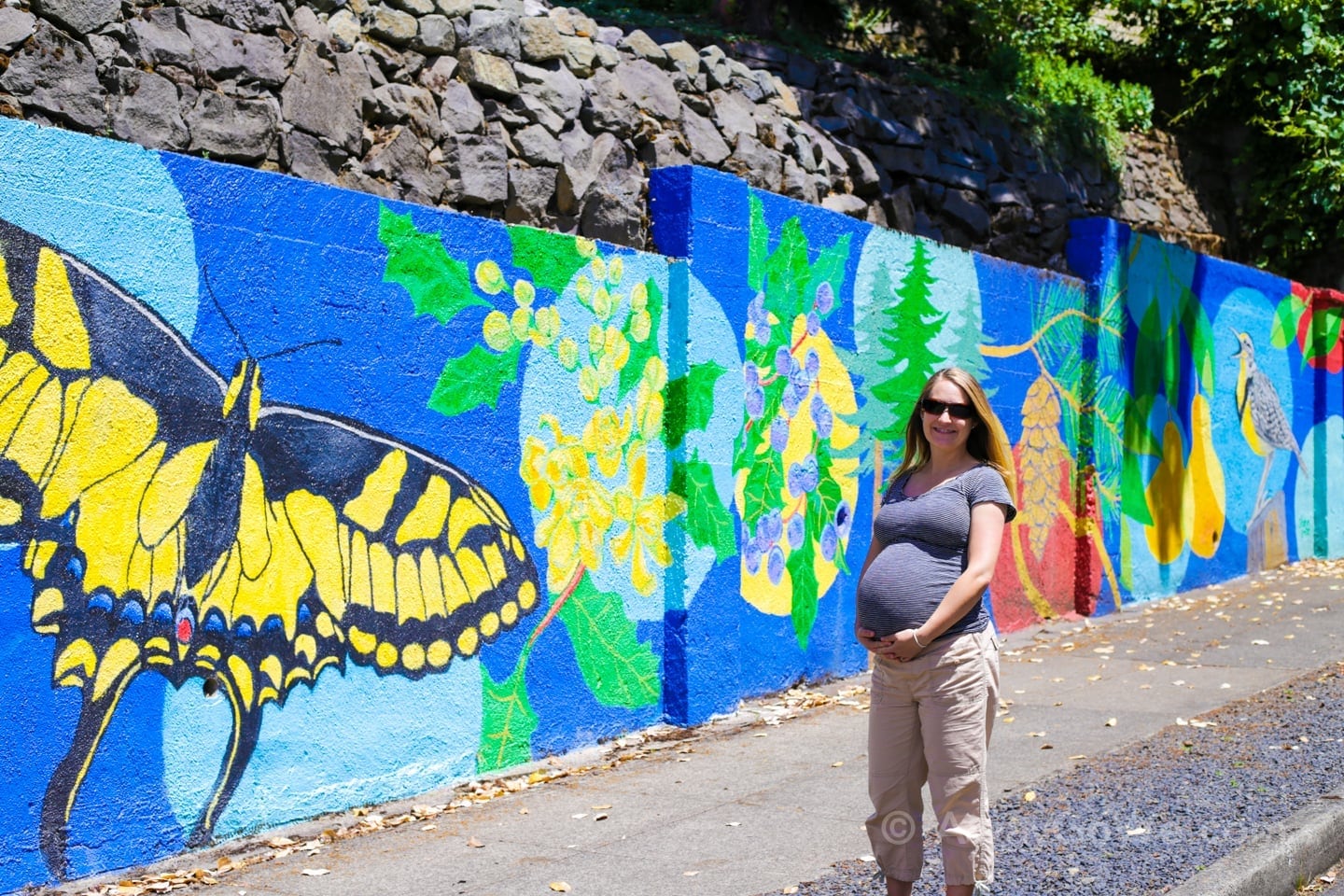 Plan on also encountering colorful murals along the route. 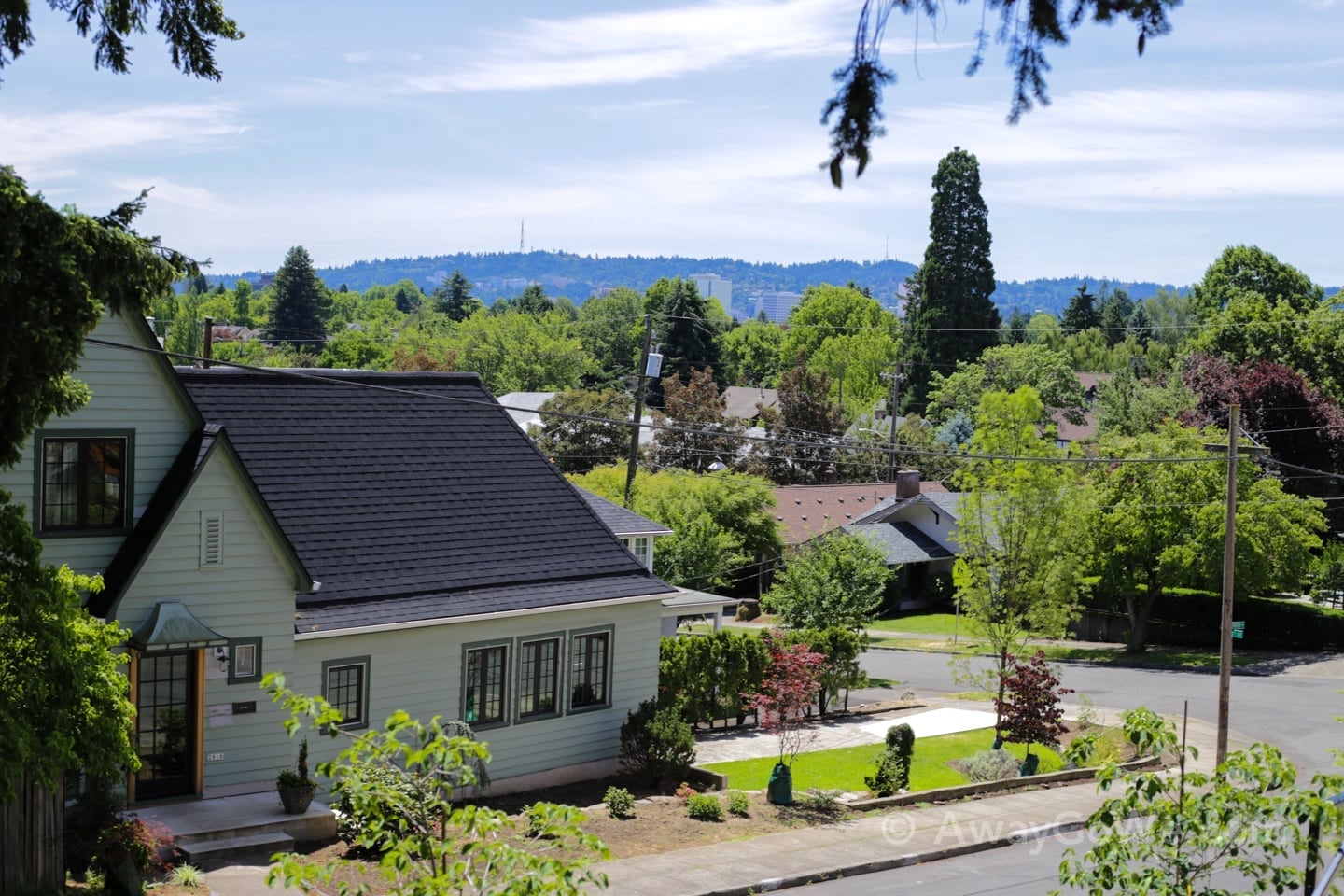 …and views of downtown Portland and the West Hills. 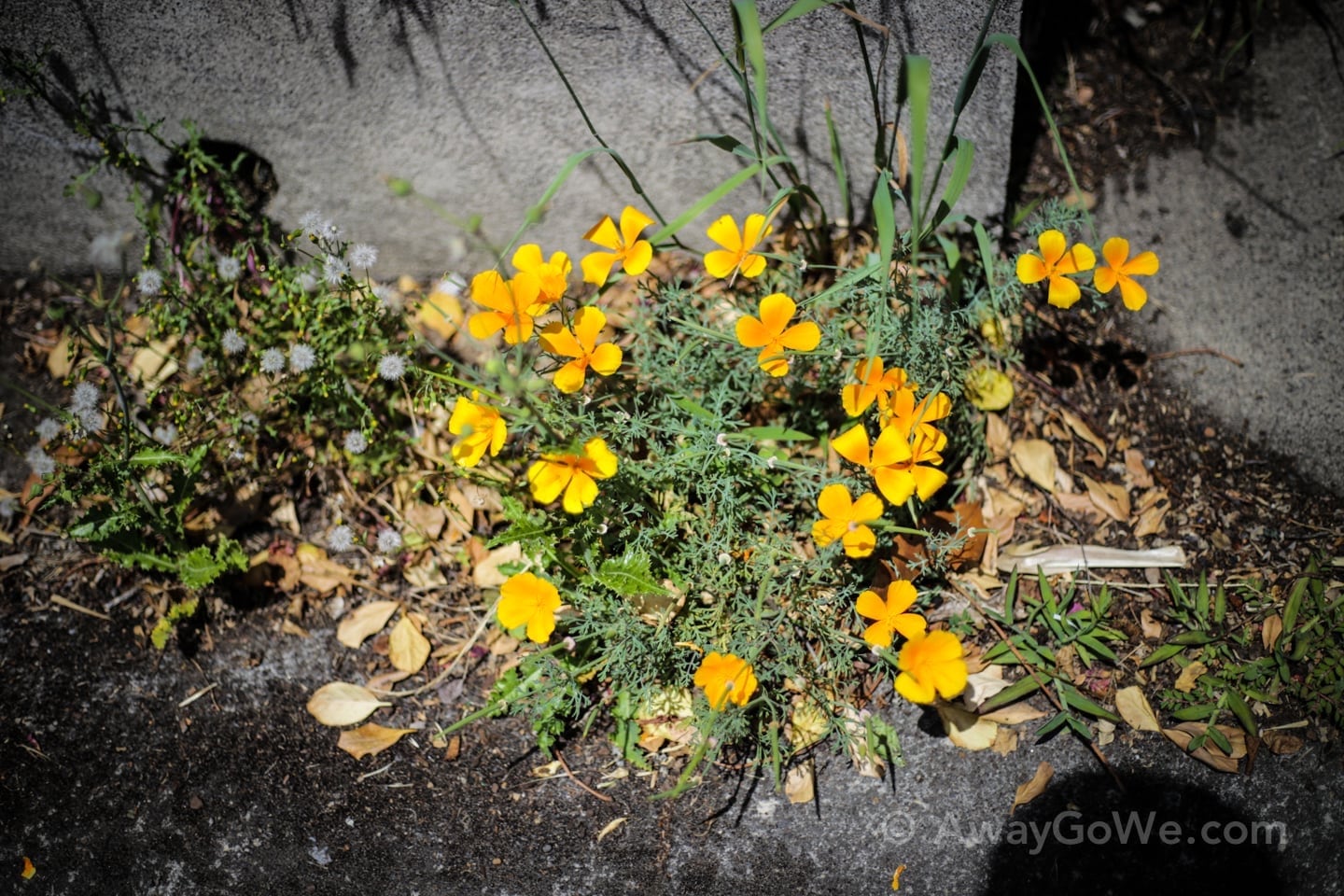 Lots of colorful wildflowers this time of year. 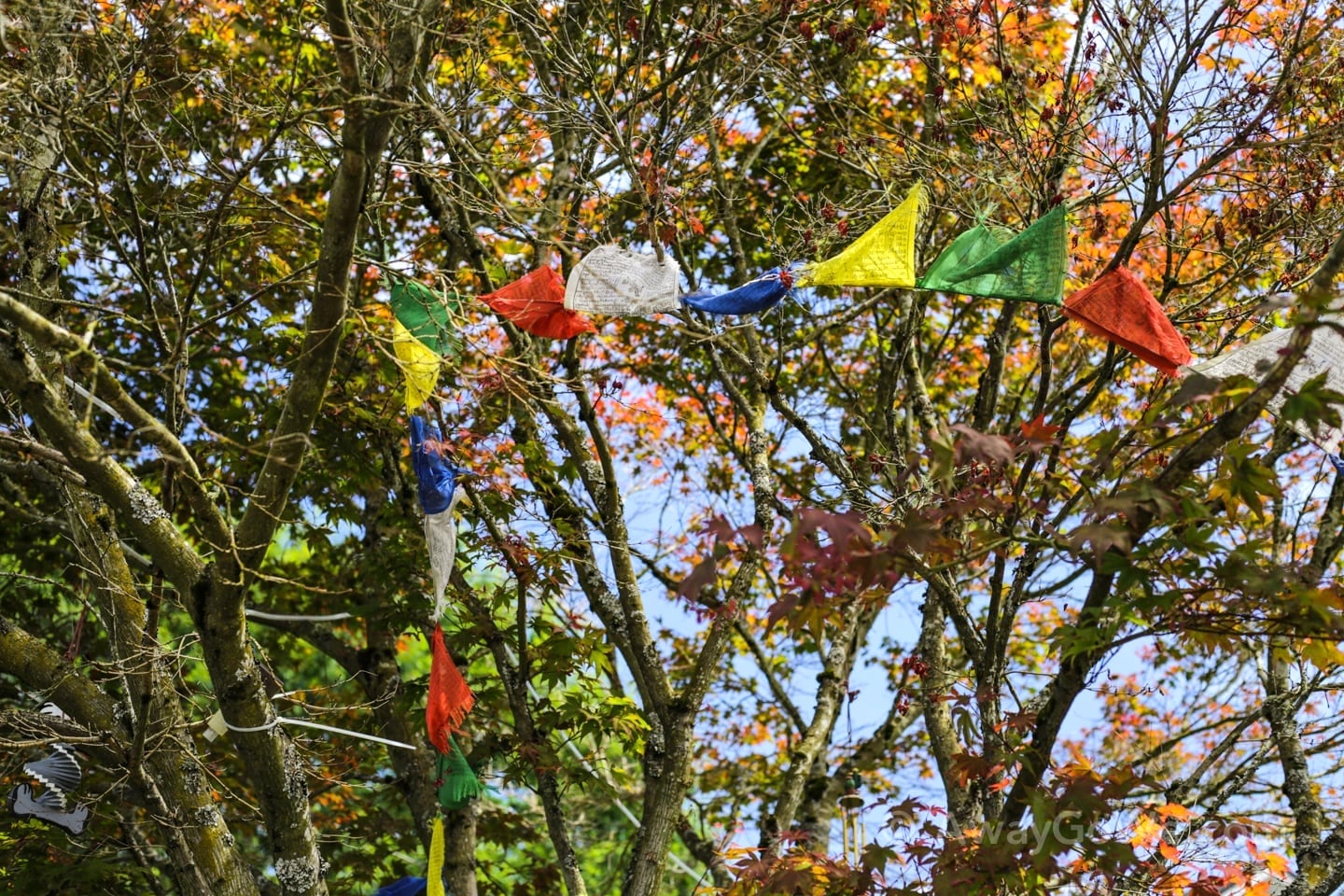 Tibetan prayer flags in a tree. 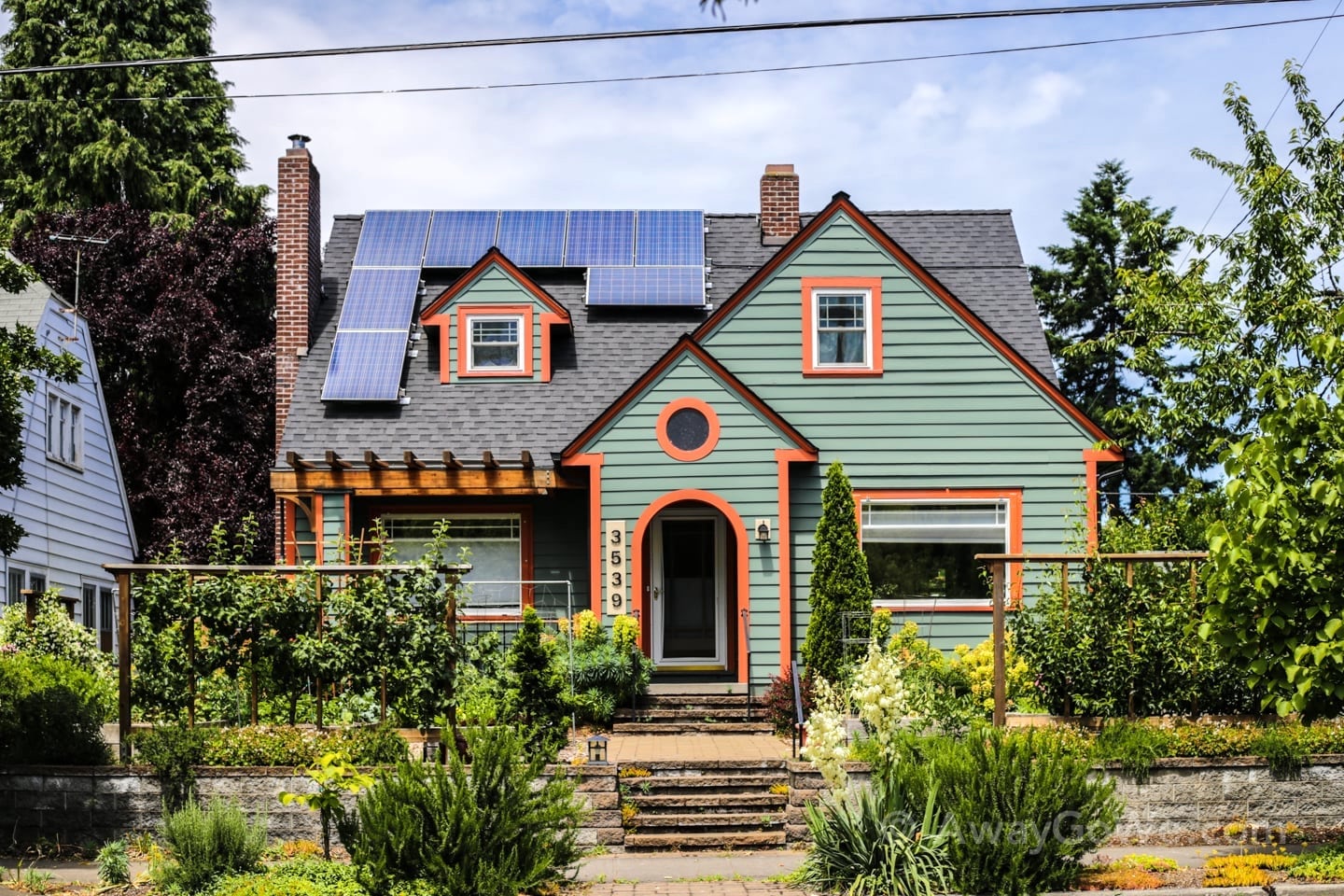 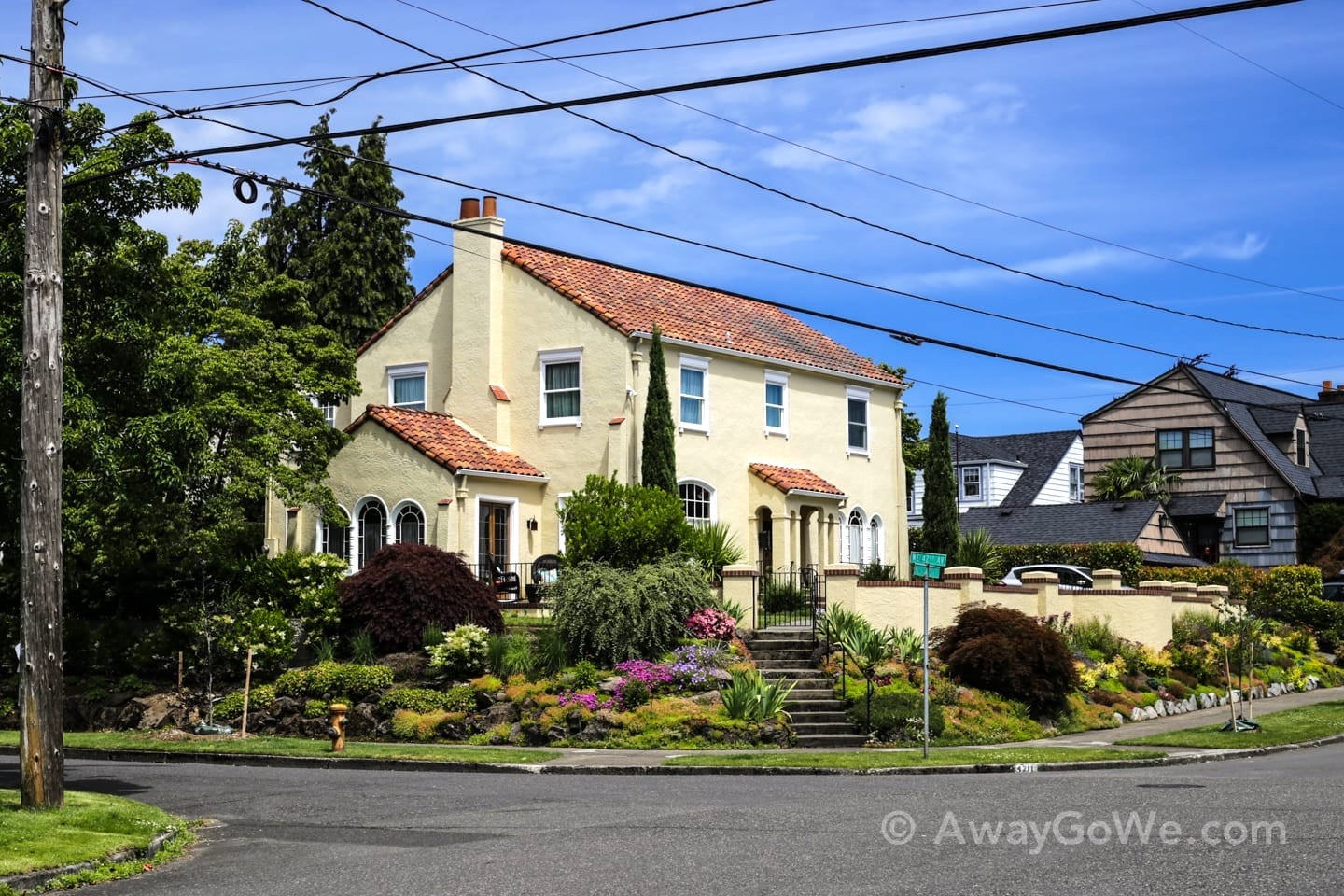 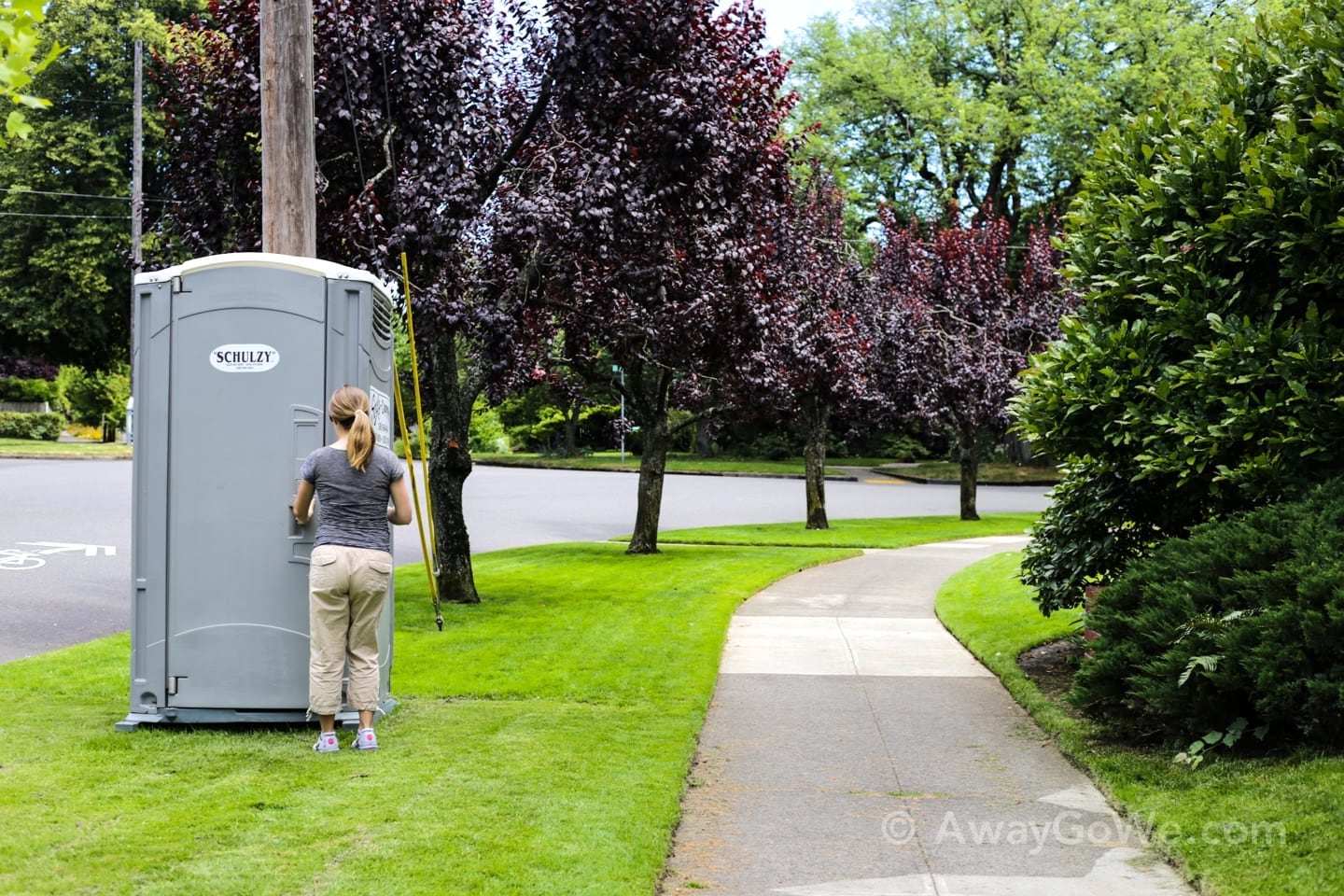 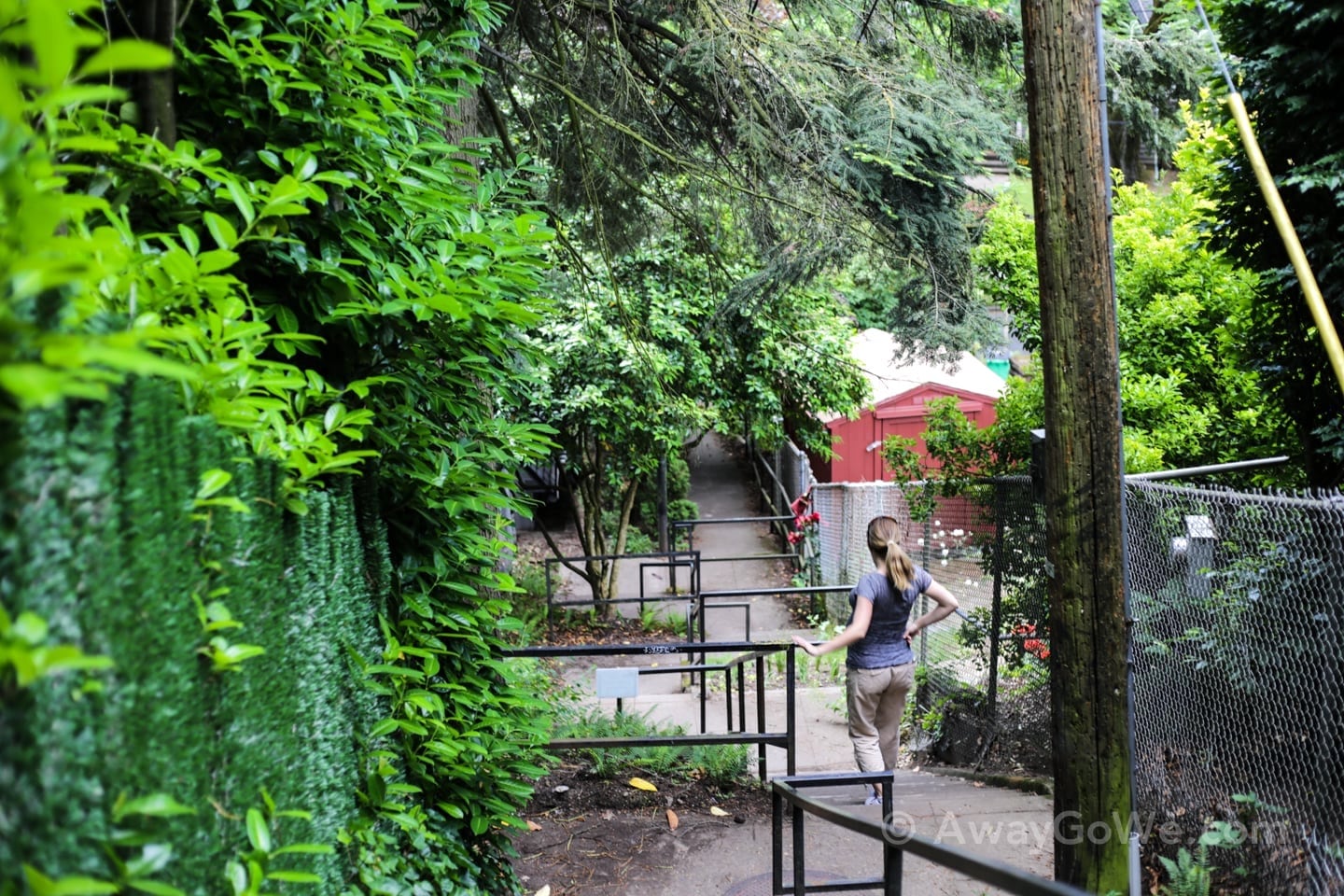 After three hours, 5.5 miles, and of course, some 400 stairs, we make it back to the beginning–NE Sandy Blvd. 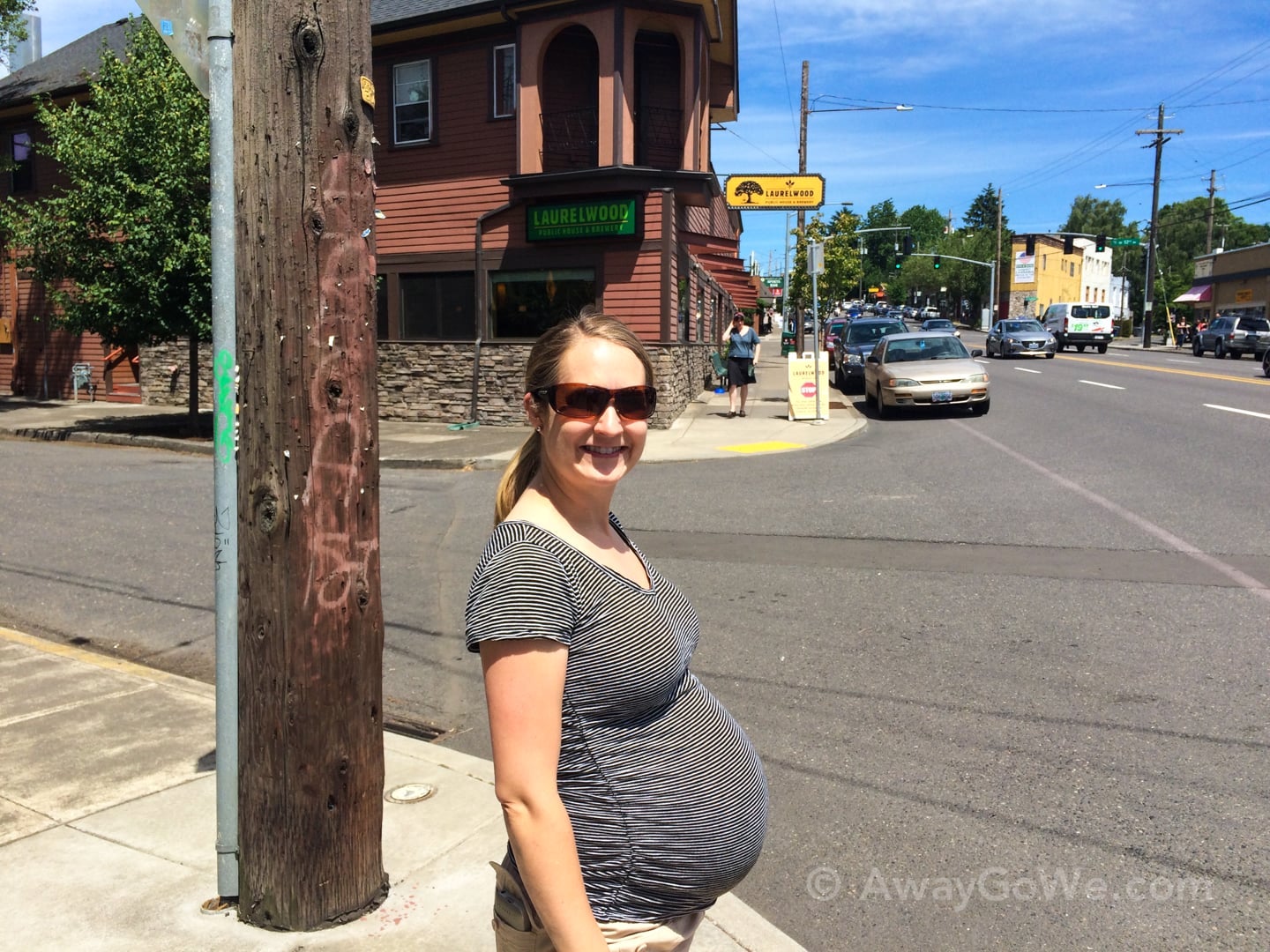 Healthy lettuce wrap for the Missus: 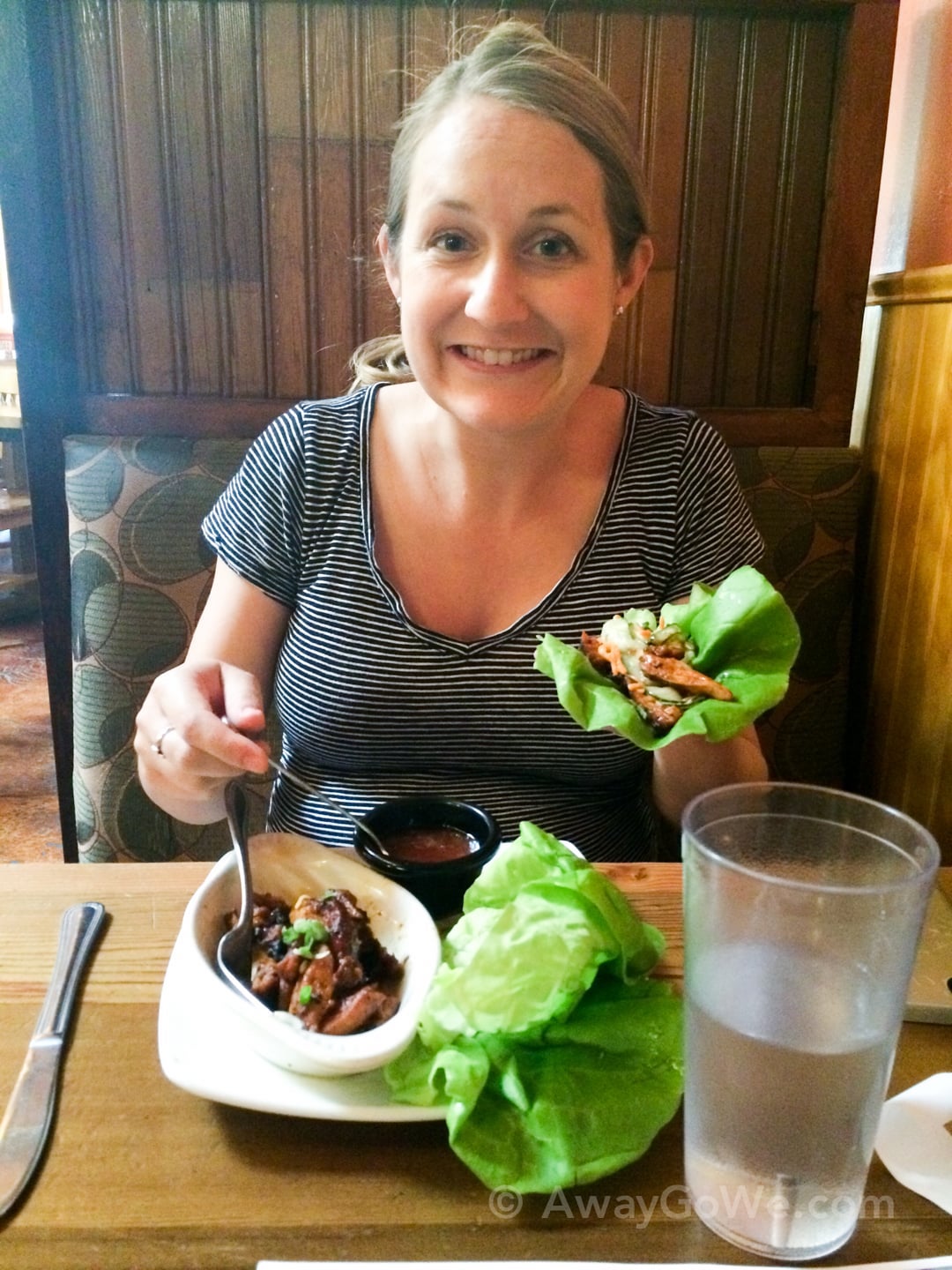 And an equally healthy snack for the Mister. Bite-sized chimichangas and Tree Hugger Stout! 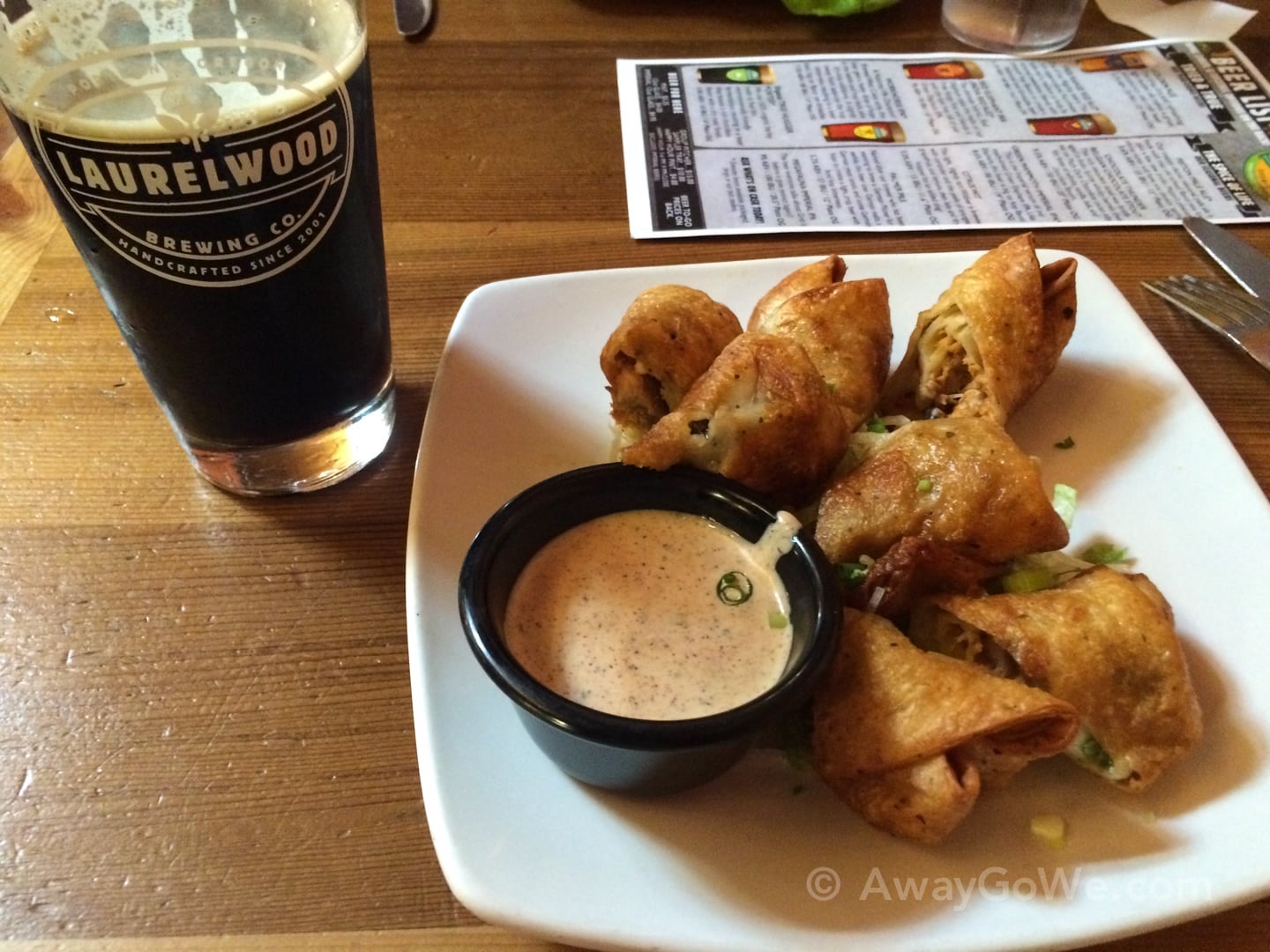 Tell us about your adventure in the comments below!