Sala Keoku sculpture park in Nong Khai, Thailand is worth a visit! Check out our guide for travelers with colorful photography and helpful tips for planning your trip to Isan.

Sala Keoku park in Nong Khai, Thailand, is Luang Pu Bunleua Sulilat’s even more ambitious and enigmatic follow-up to his famed Buddha Park just across the river in Laos.

The statues, bigger. The message, bolder. The project, on a grander scale than anything previously attempted.

Isan mystic and sculptor Sulilat made Buddha Park, just outside of Vientiane, his life’s passion for two decades.

Following the revolution in Laos in 1975, Sulilat became increasingly concerned about the political climate, ultimately making the decision to leave behind his life’s work and flee across the river to his homeland of Isan.

Sulilat died as a result of complications from a fall while working on one of his giant sculptures in this park. His body was mummified and resides in a large white pavilion here at Sala Keoku. 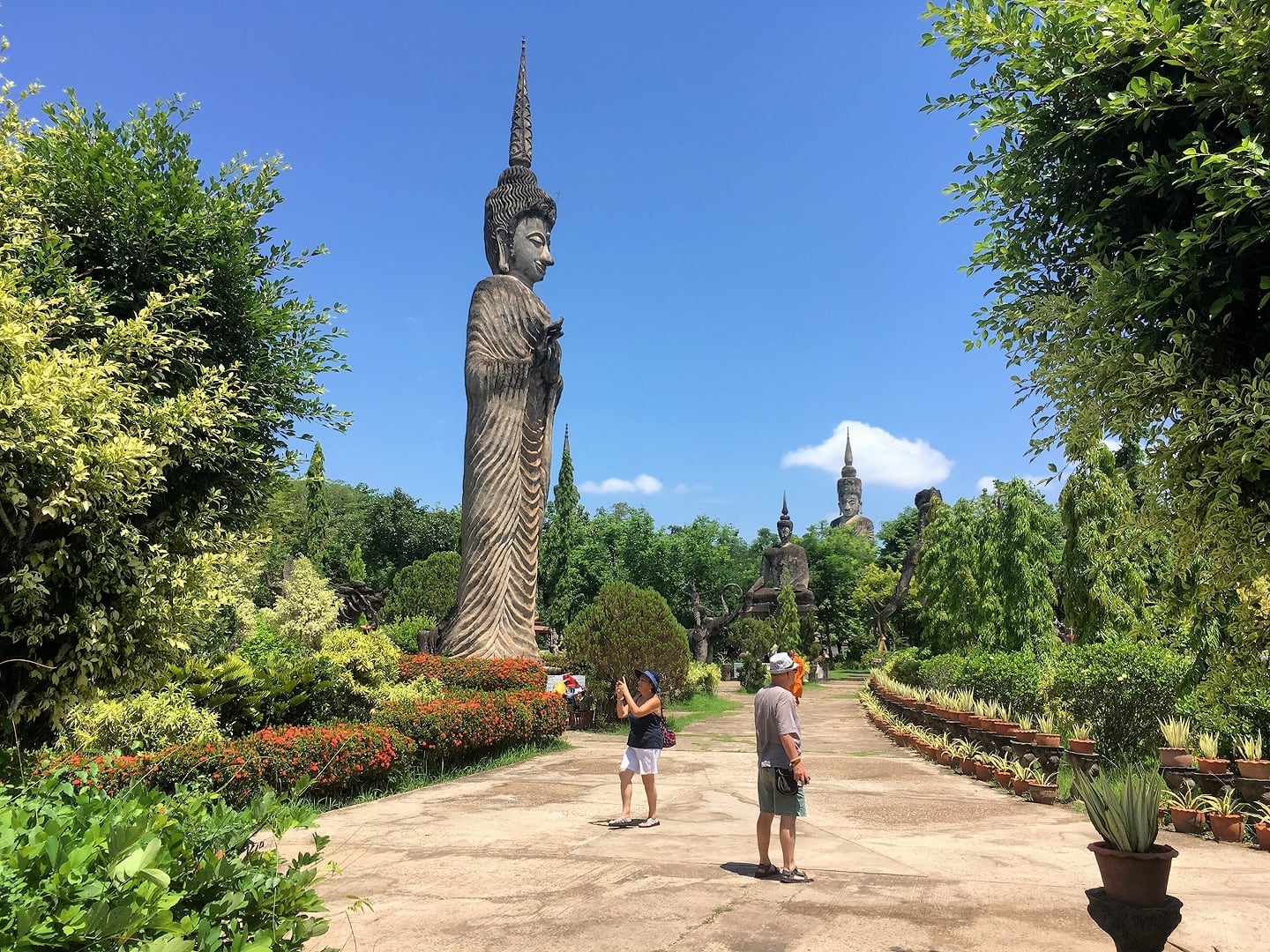 Exploring the Sculptures of Sala Keoku

Sala Keoku is often referred to as Buddha Park II, but calling it so misses the mark.

It’s clear that Sulilat wasn’t merely attempting to recreate what he had left behind across the river in Laos. To do so would have contradicted the very message he devoted his life to.

Rather, Sala Keoku represents an evolution of ideas and beliefs, a new phase in the the cycle of death, rebirth, and human existence.

Unlike Vientiane’s Buddha Park, there is no Giant Pumpkin or anything of the like. Here in Nong Khai, Sulilat seems to rely less on novelty and more on his distinct craft and strong faith to guide his work.

That’s not to say there isn’t an elephant riding a giant rat to be reckoned with. 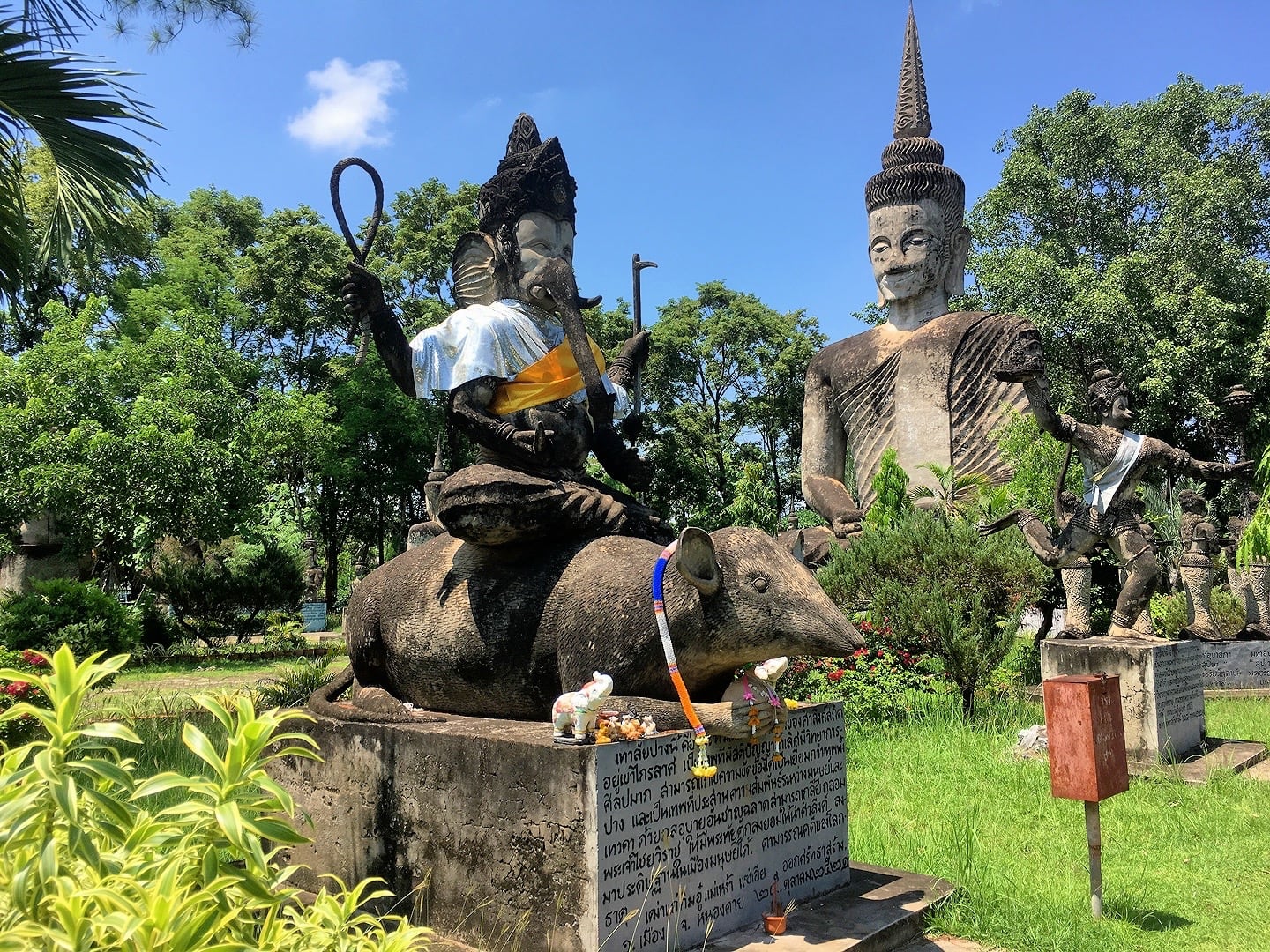 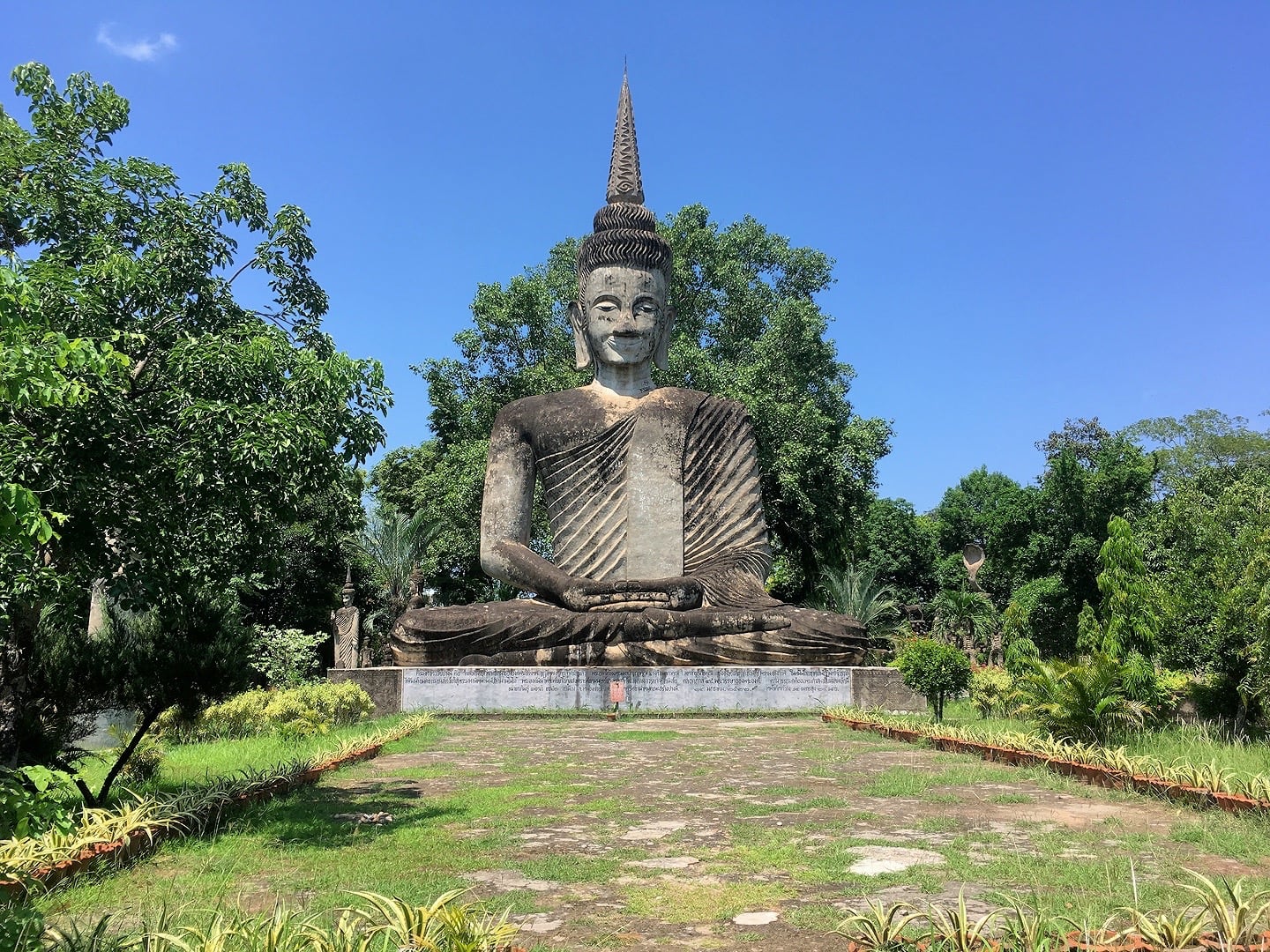 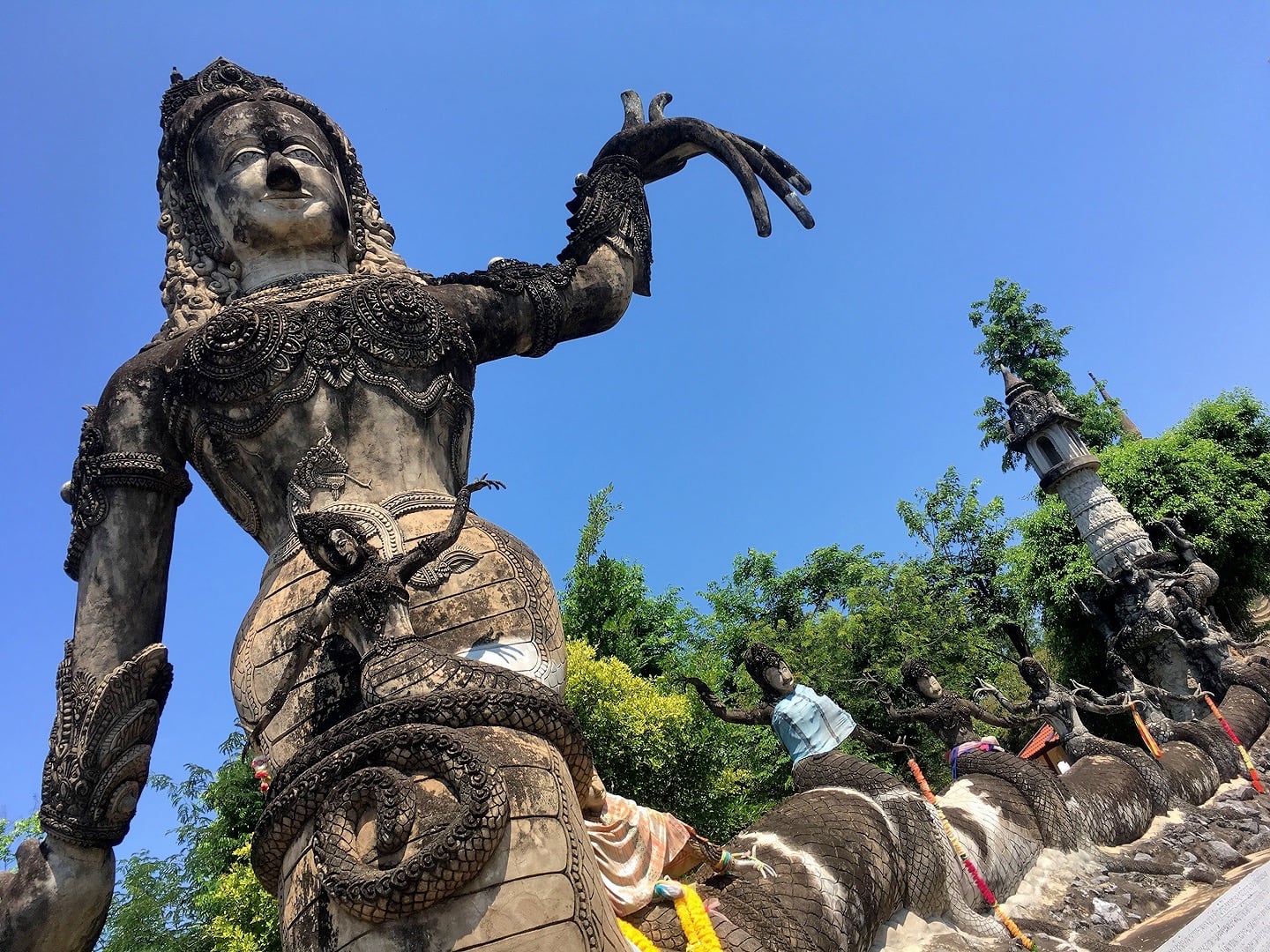 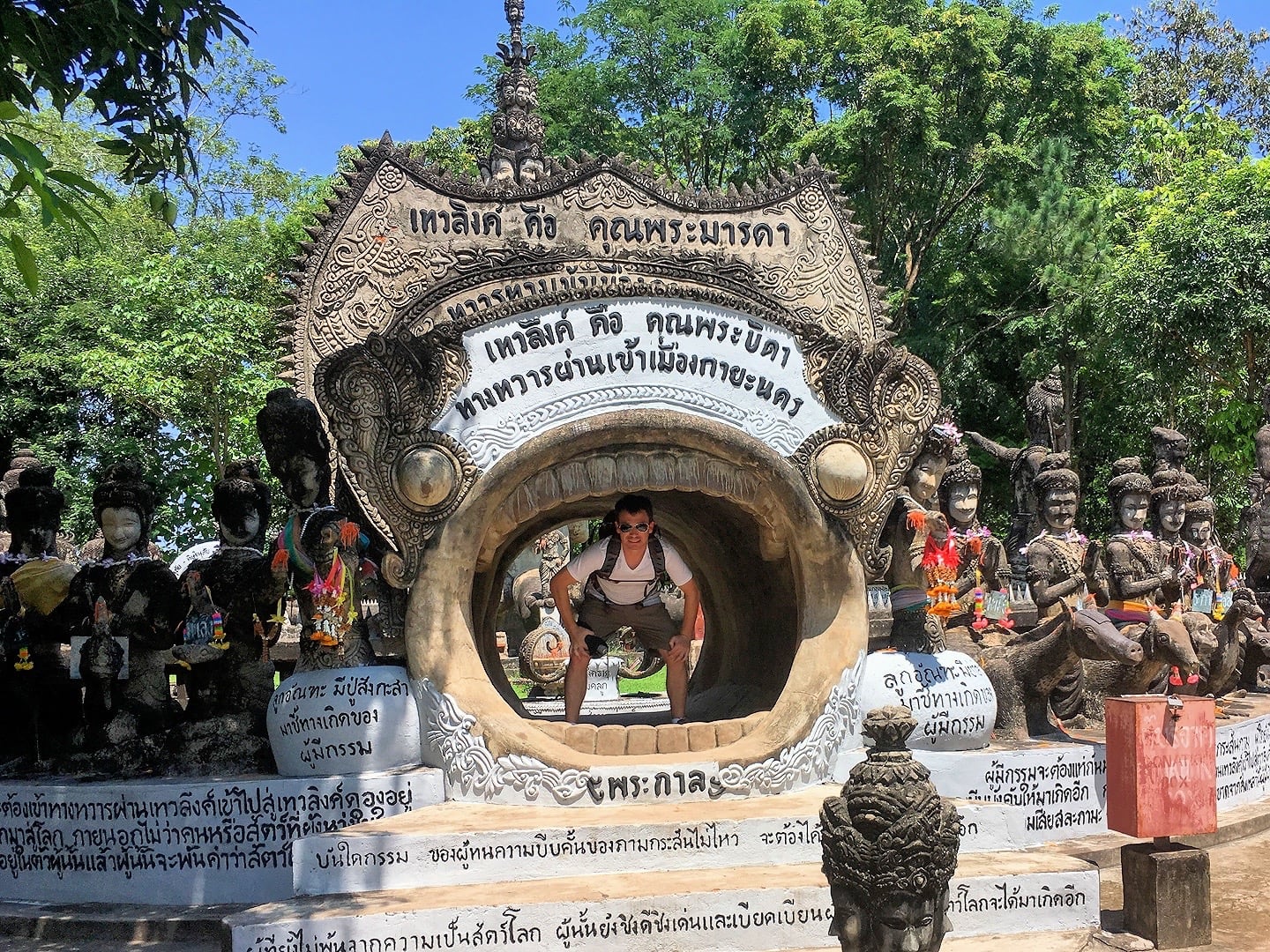 If there is one standout sculpture that grabs the visitor more than any other, it might just be the Wheel of Life, depicting both the morbid and the divine that characterizes the human experience.

The Wheel progresses through every stage of not just Earthly life, but of all existence as he sees it, culminating in a young man stepping across the wall encircling the entire structure to become a Buddha statue on the other side. 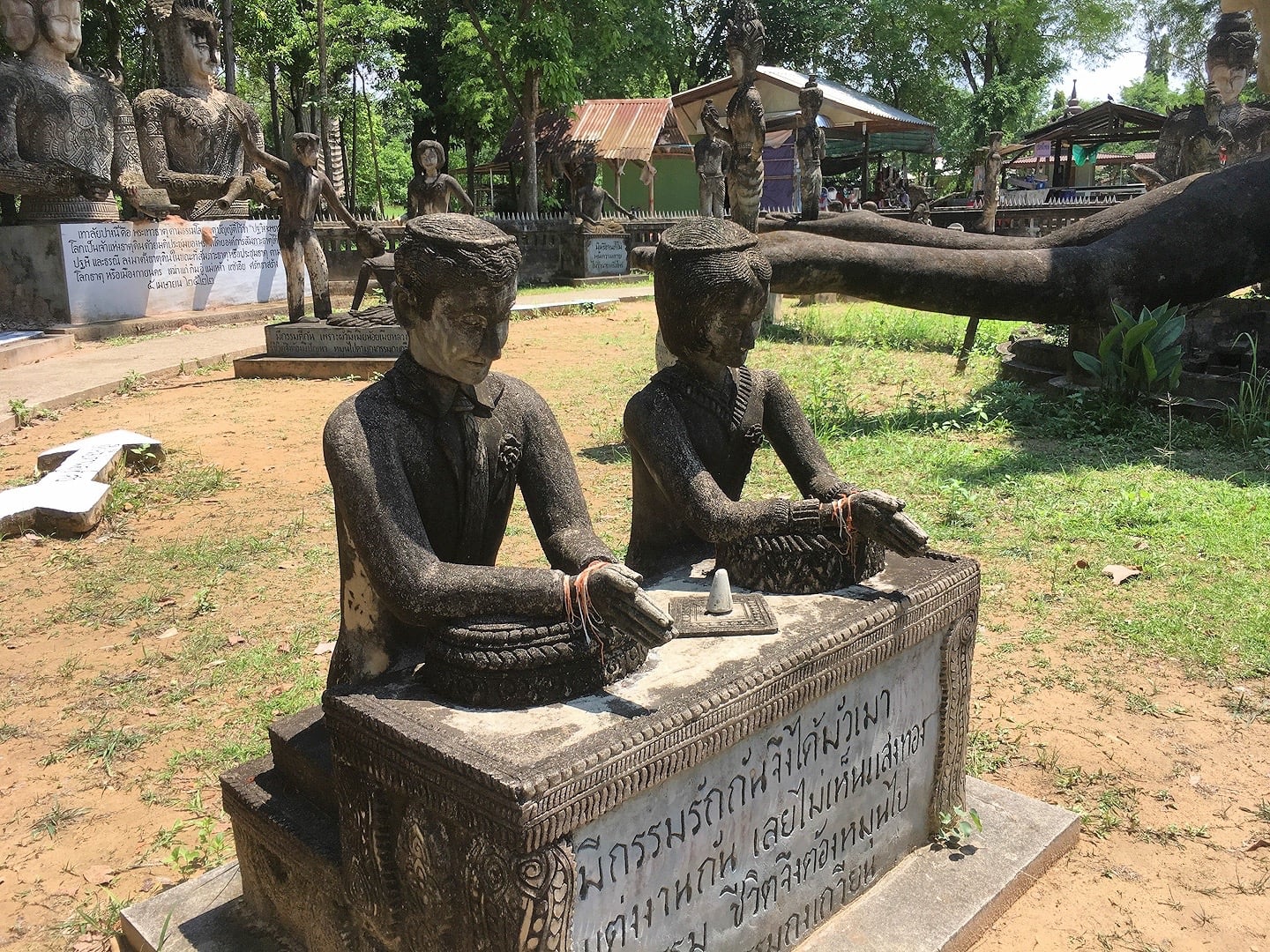 Sulilat is a master at holding up a mirror to the soul, with an honesty and integrity that modern religious art rarely achieves, or even seeks to achieve.

His work rarely minces words in what it conveys, with both the depths of human depravity, the heights of spiritual salvation, and the struggle in between. 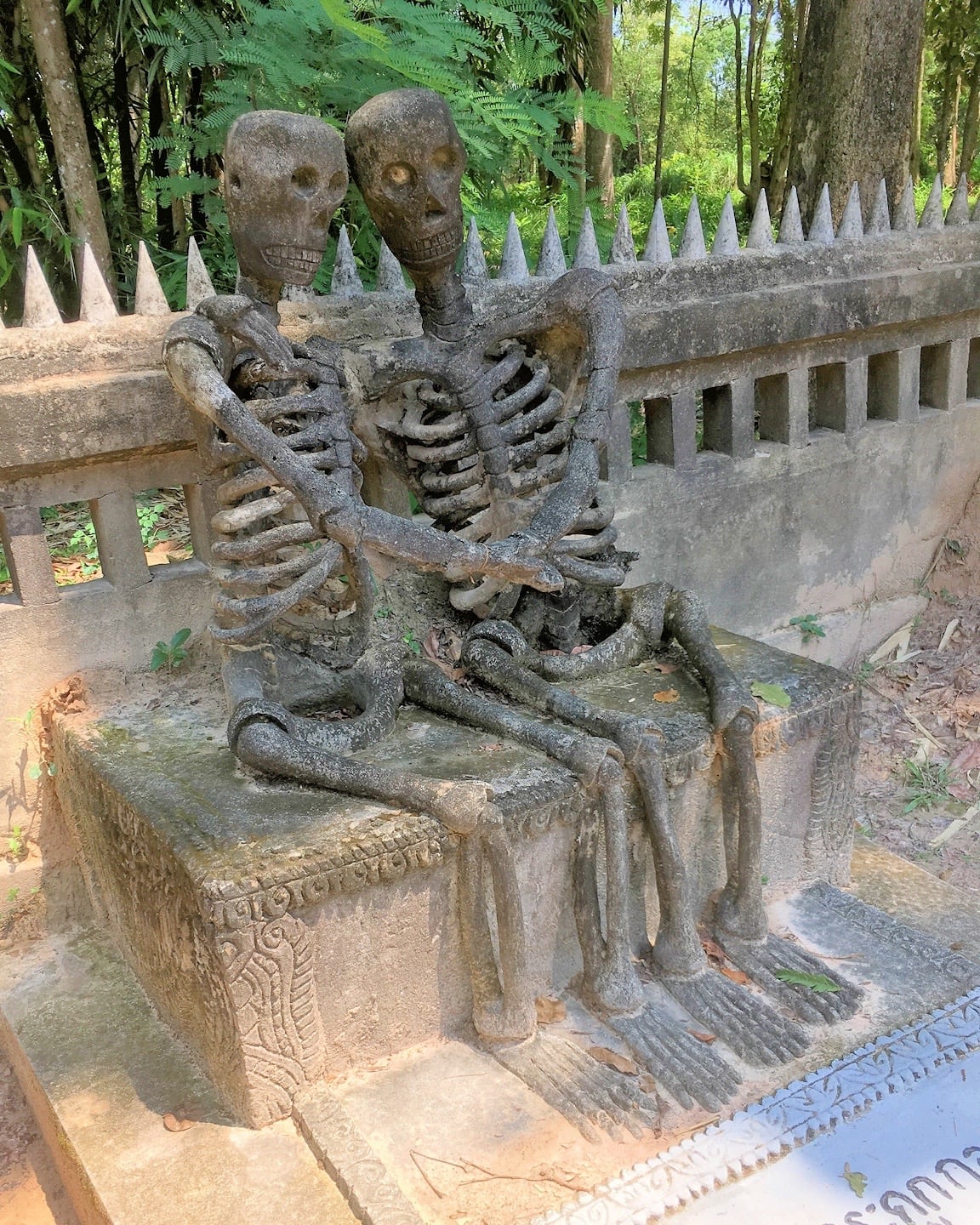 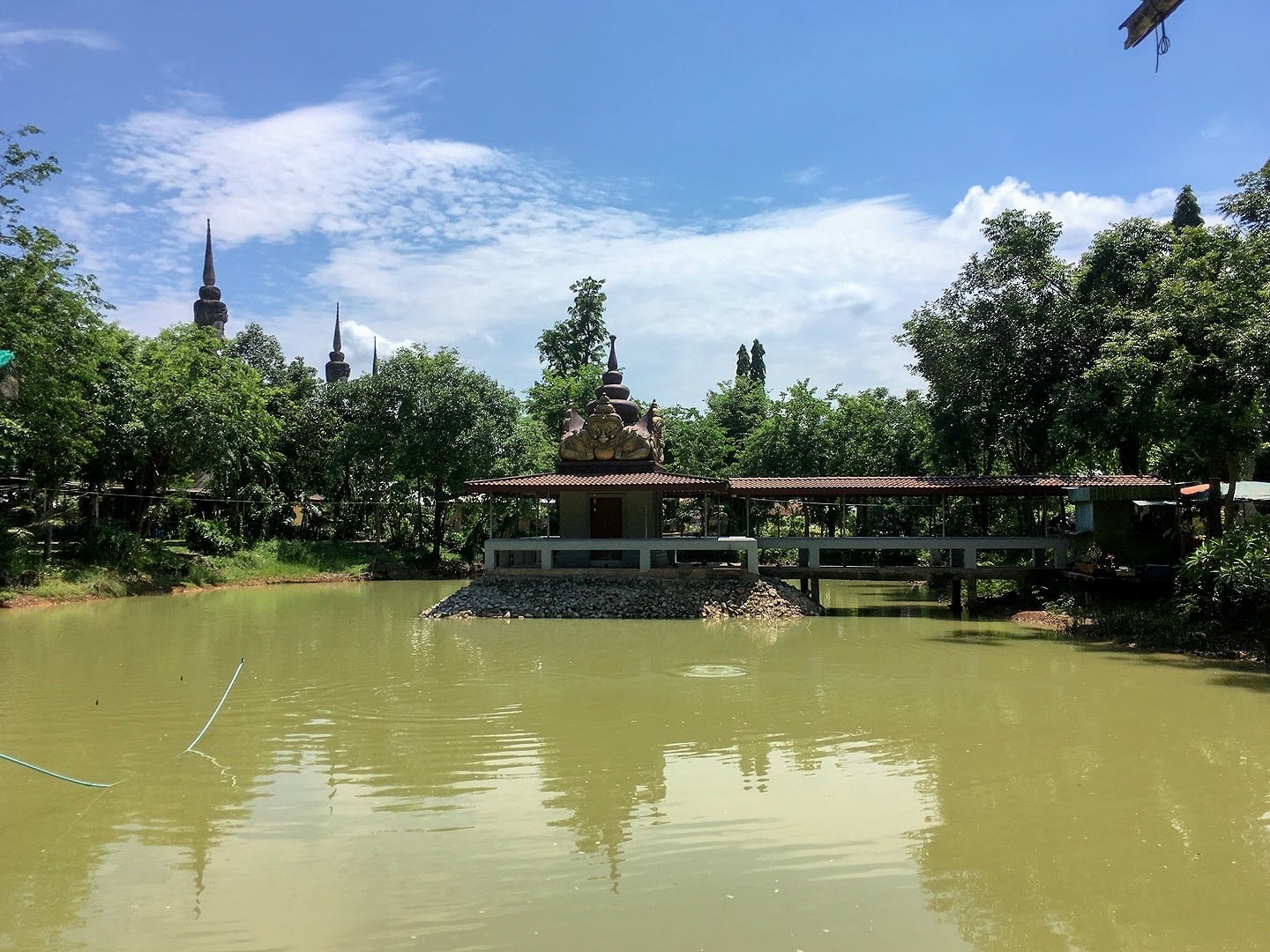 Water plays a central role in this park, though it feels at times that the message is incomplete or unfinished. 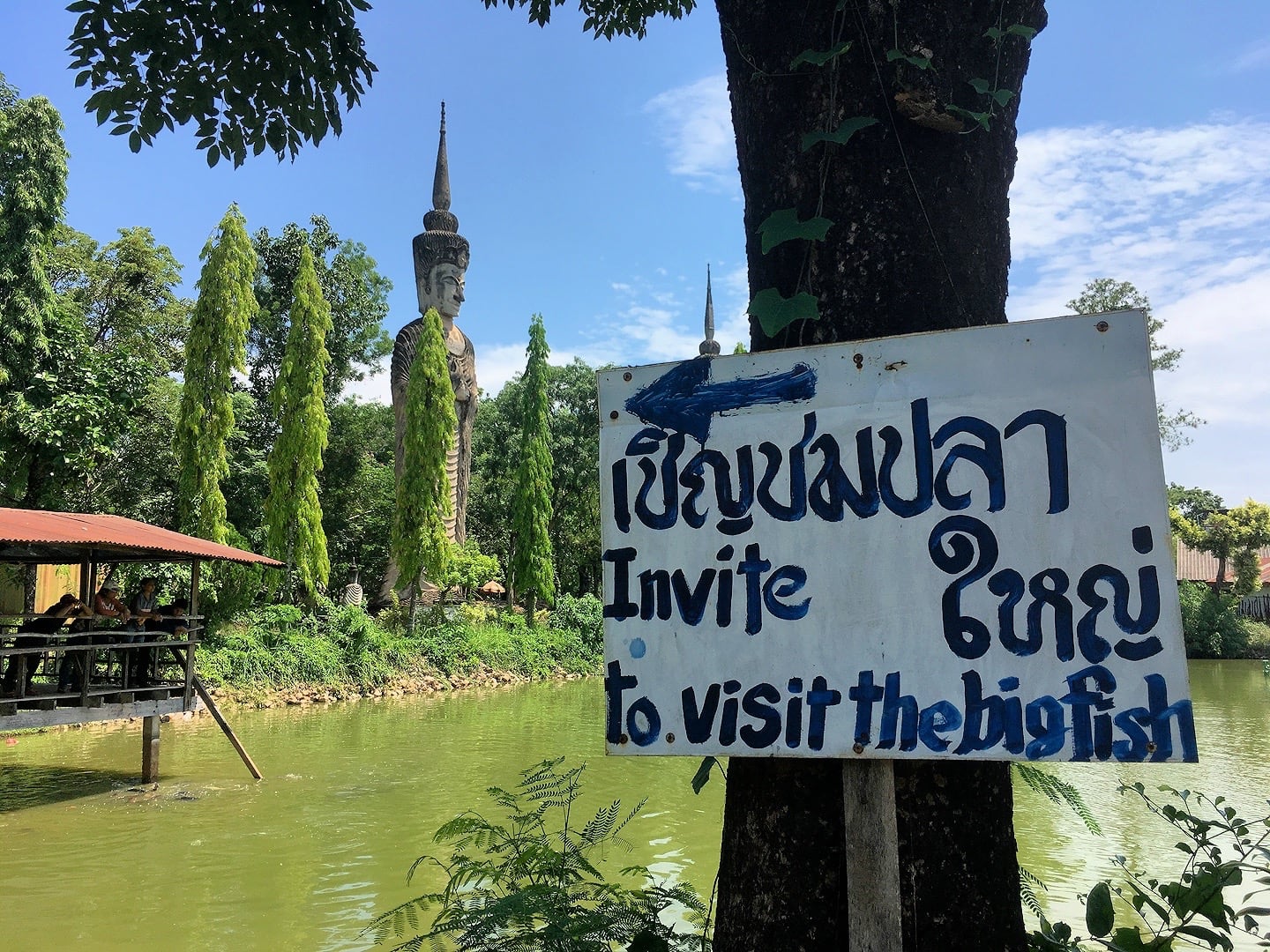 This sign invited us to visit the big fish. Expecting another giant sculpture, we were intrigued but weren’t expecting to be surprised. We should have known better. 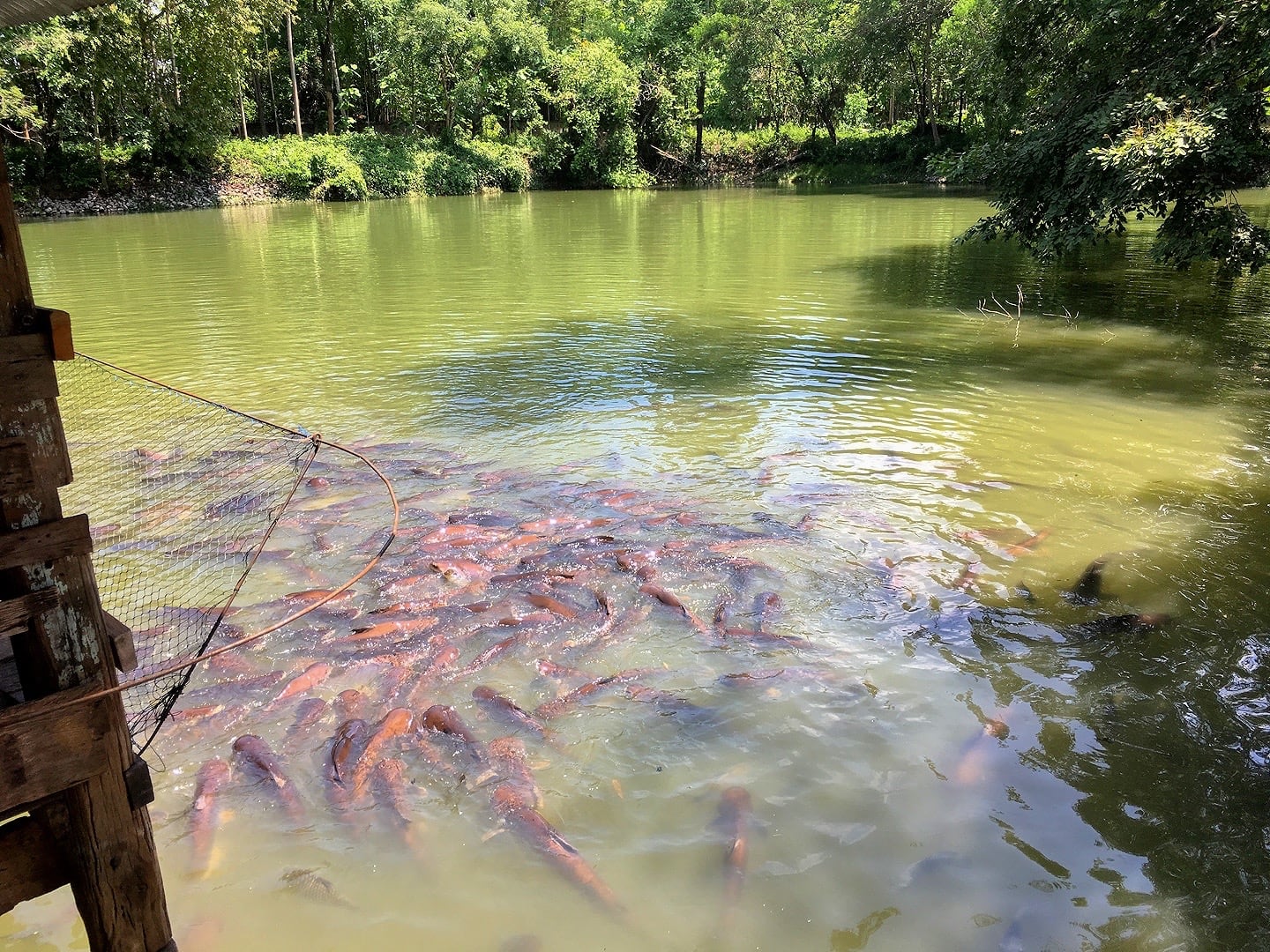 Not just ONE big fish, but several dozen large catfish. Visitors can feed the catfish for a small fee. 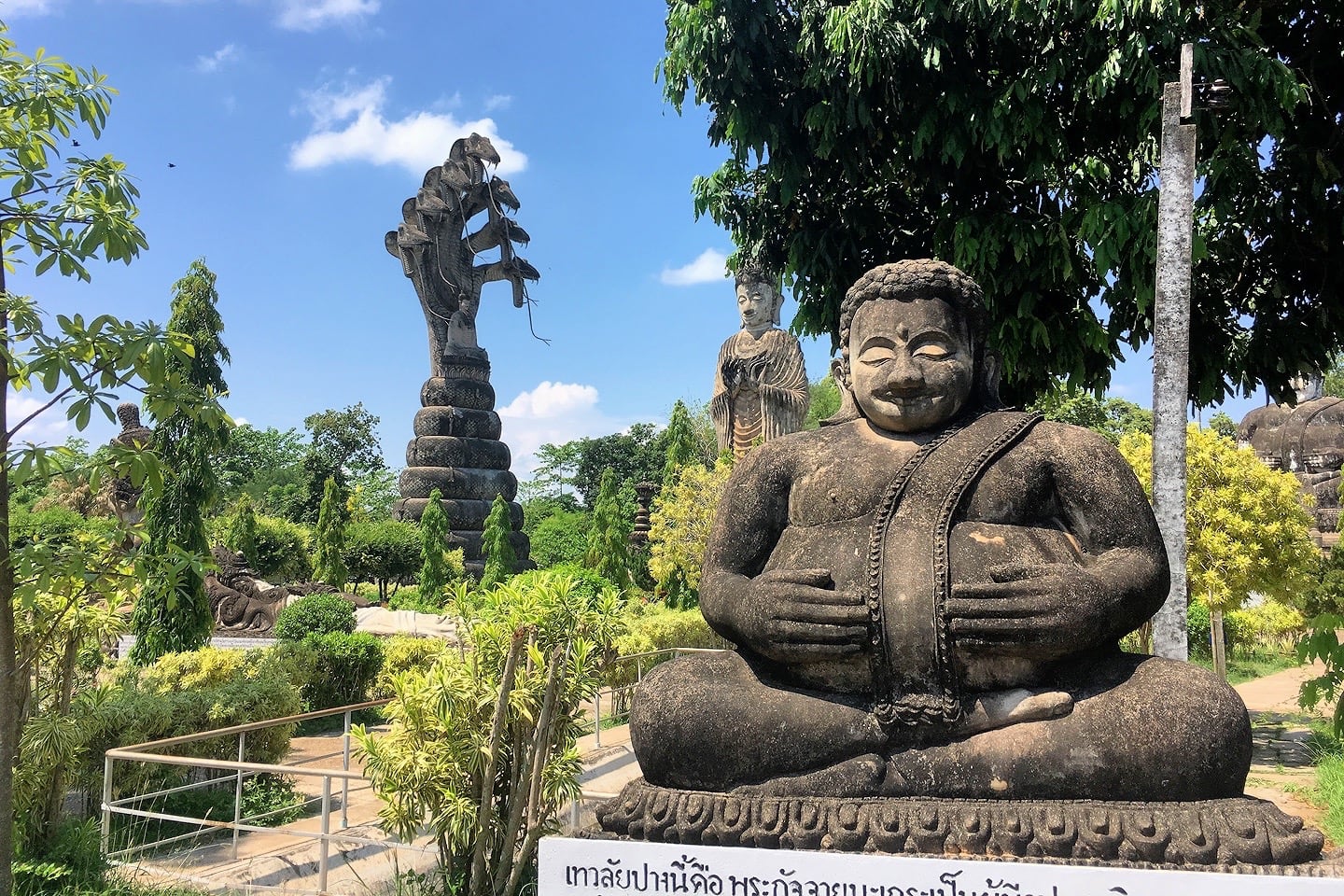 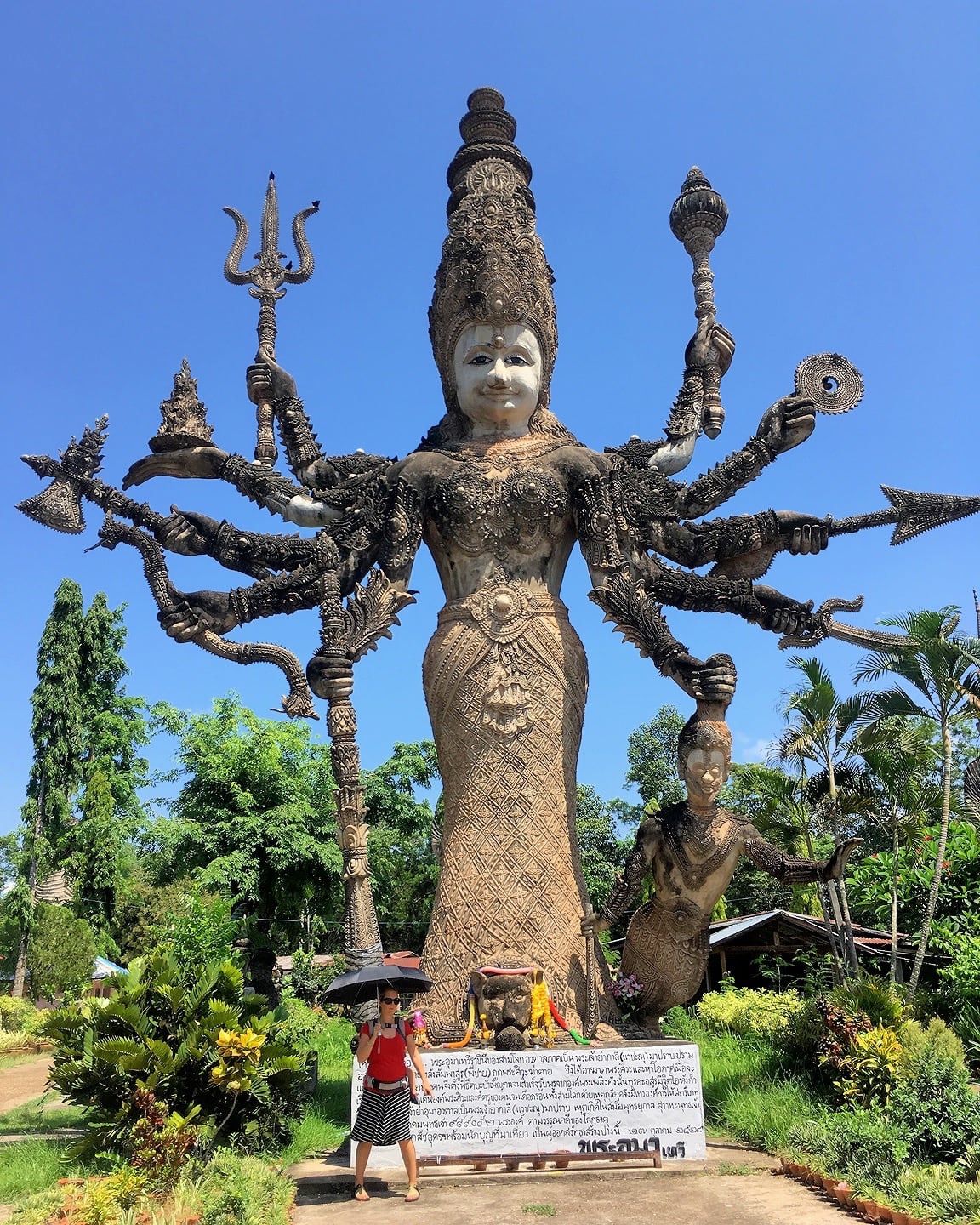 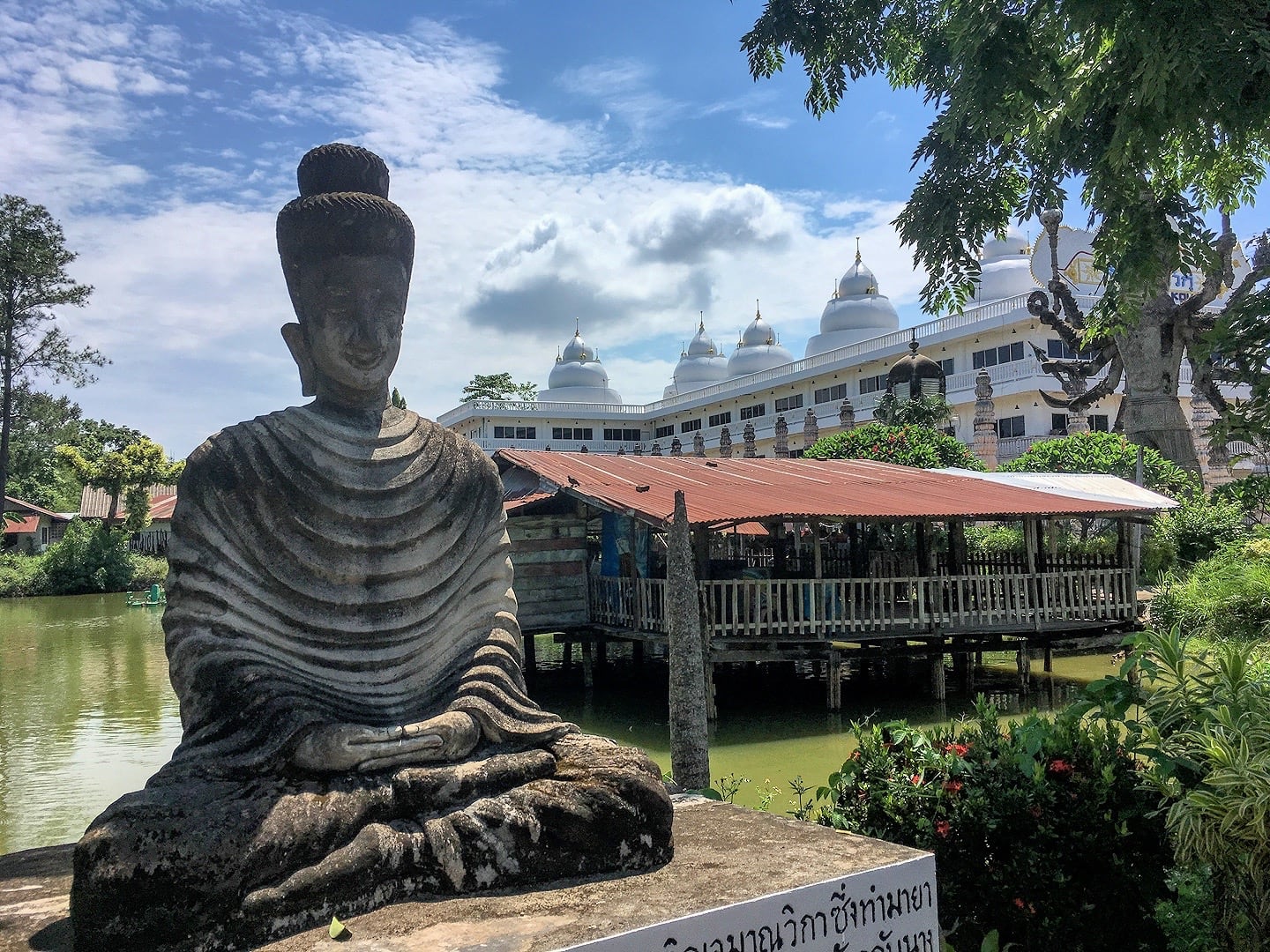 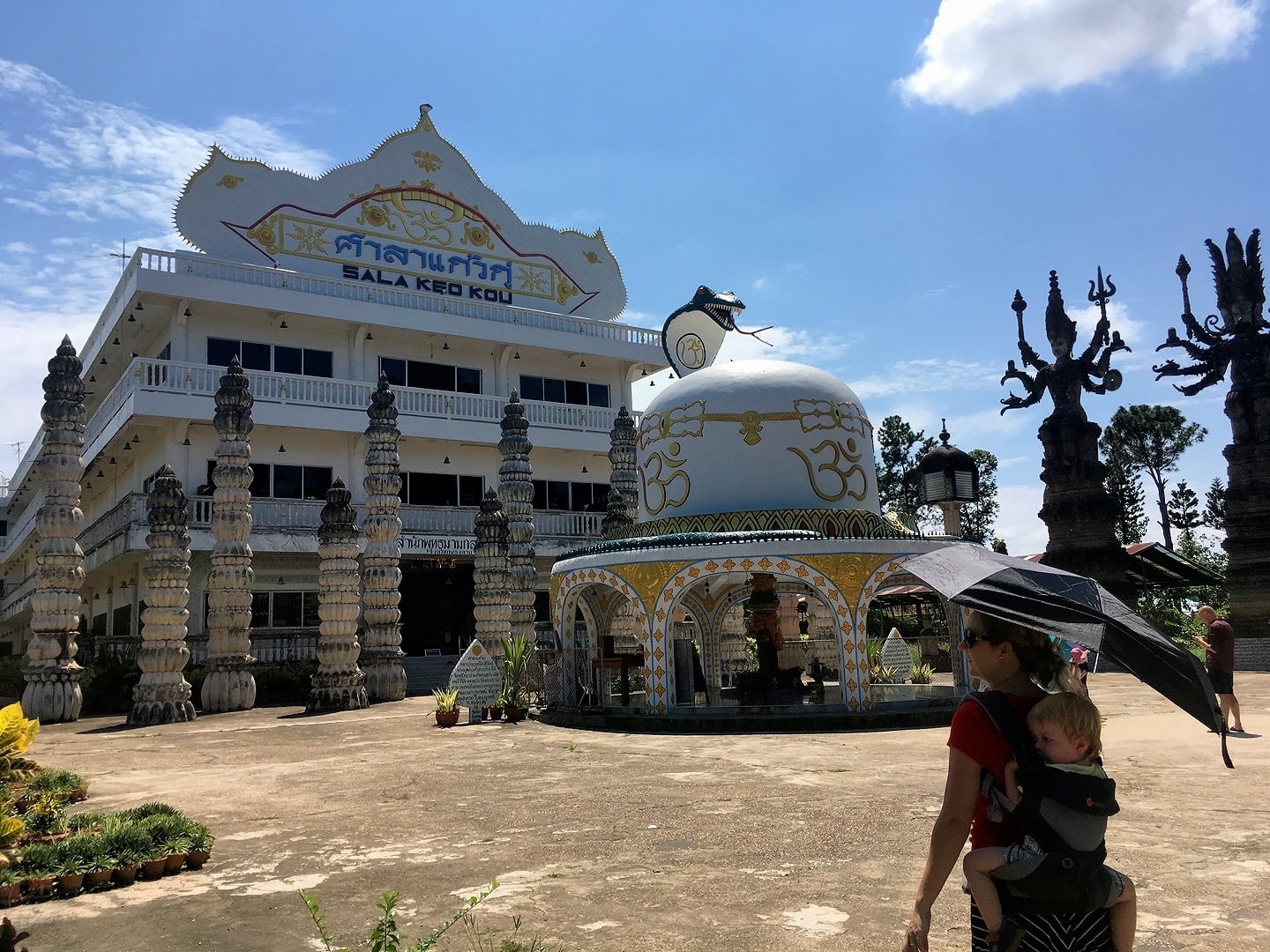 Sala Keoku may not have a giant pumpkin, but it does have this sizable and mysterious structure.

Unfortunately for us, very little of the park has English signage, so we found ourselves in the dark for much of our visit.

We later discovered that this pavilion was constructed as the final resting place for the park’s creator, Sulilat, and his mummified body resides on the third floor. 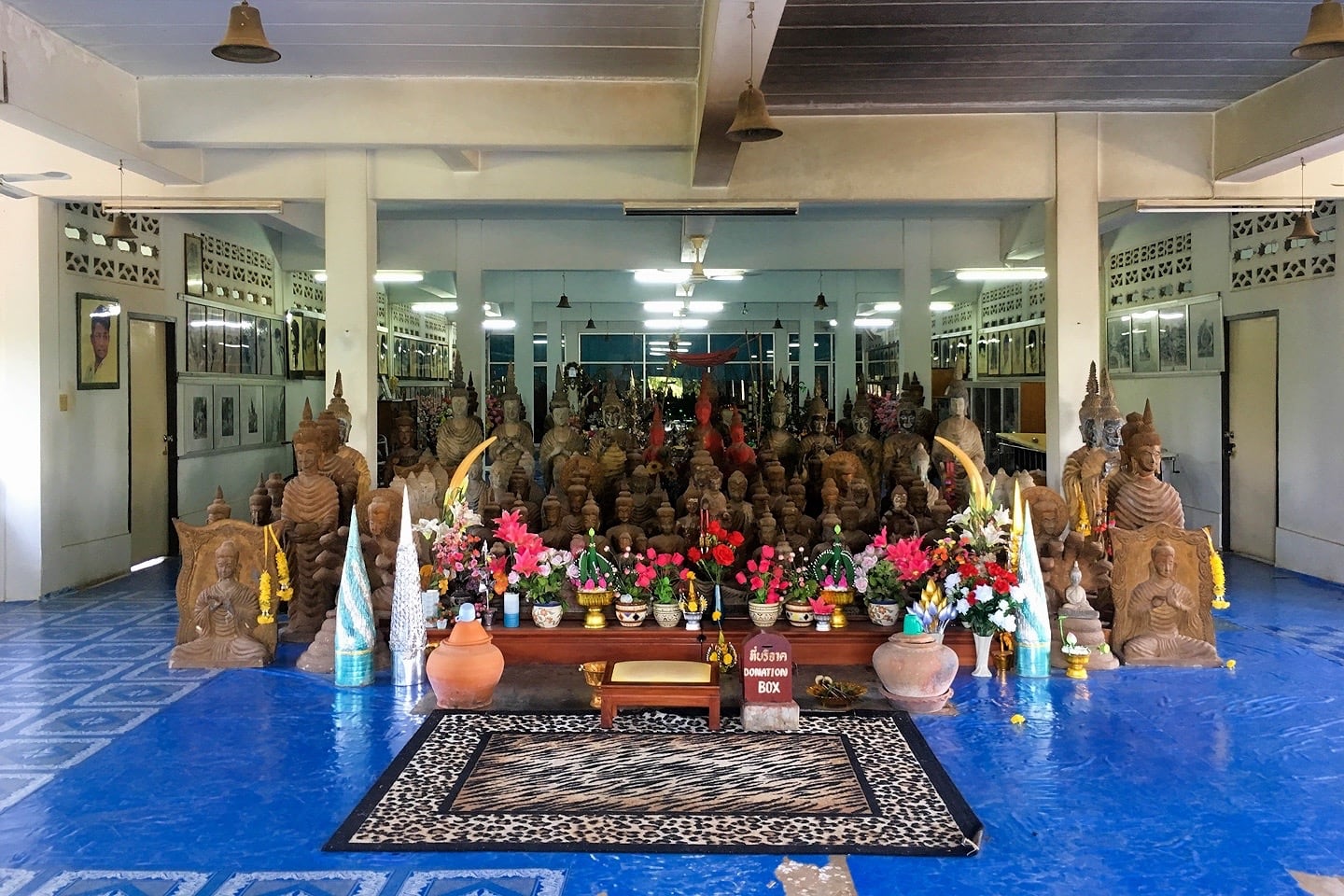 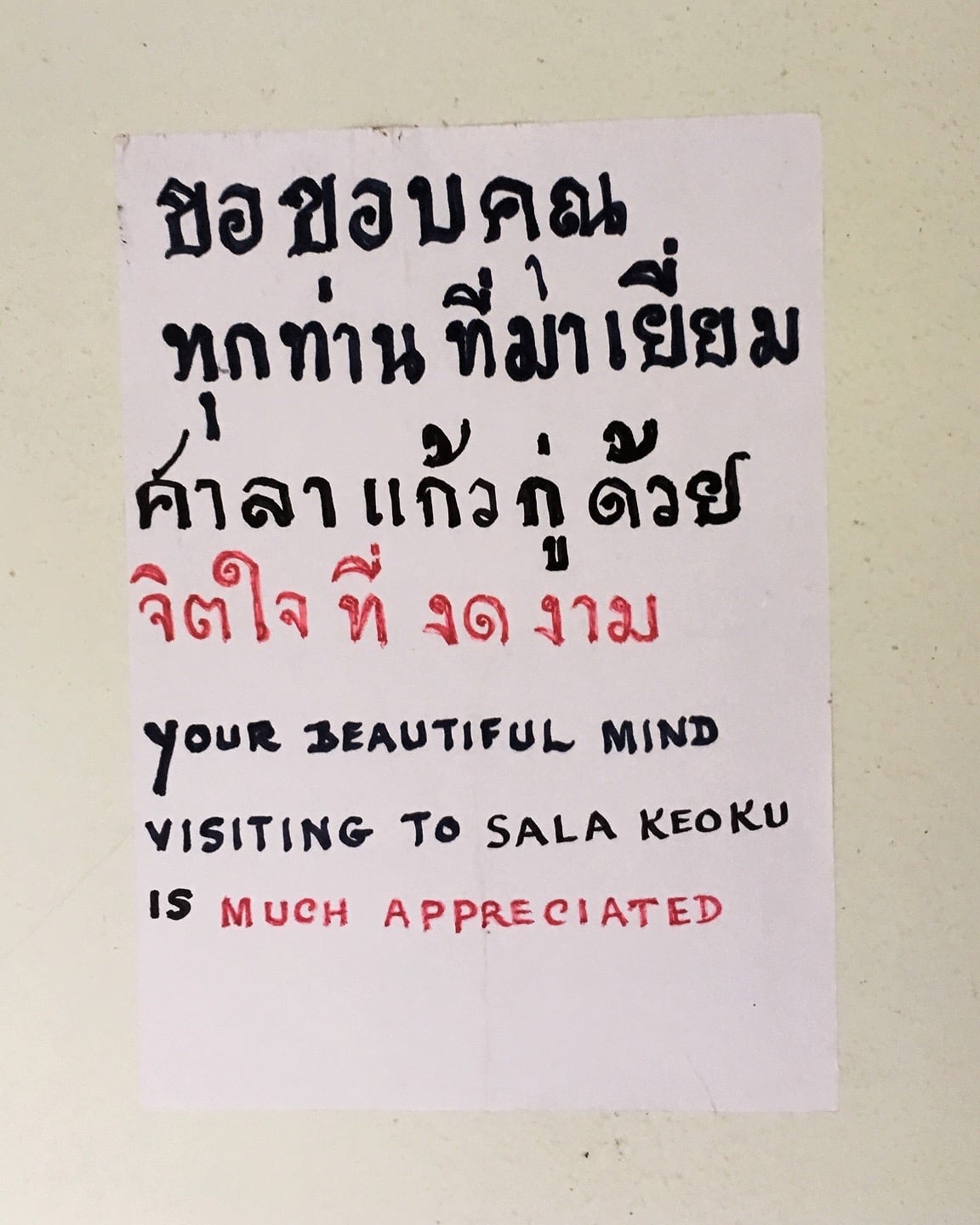 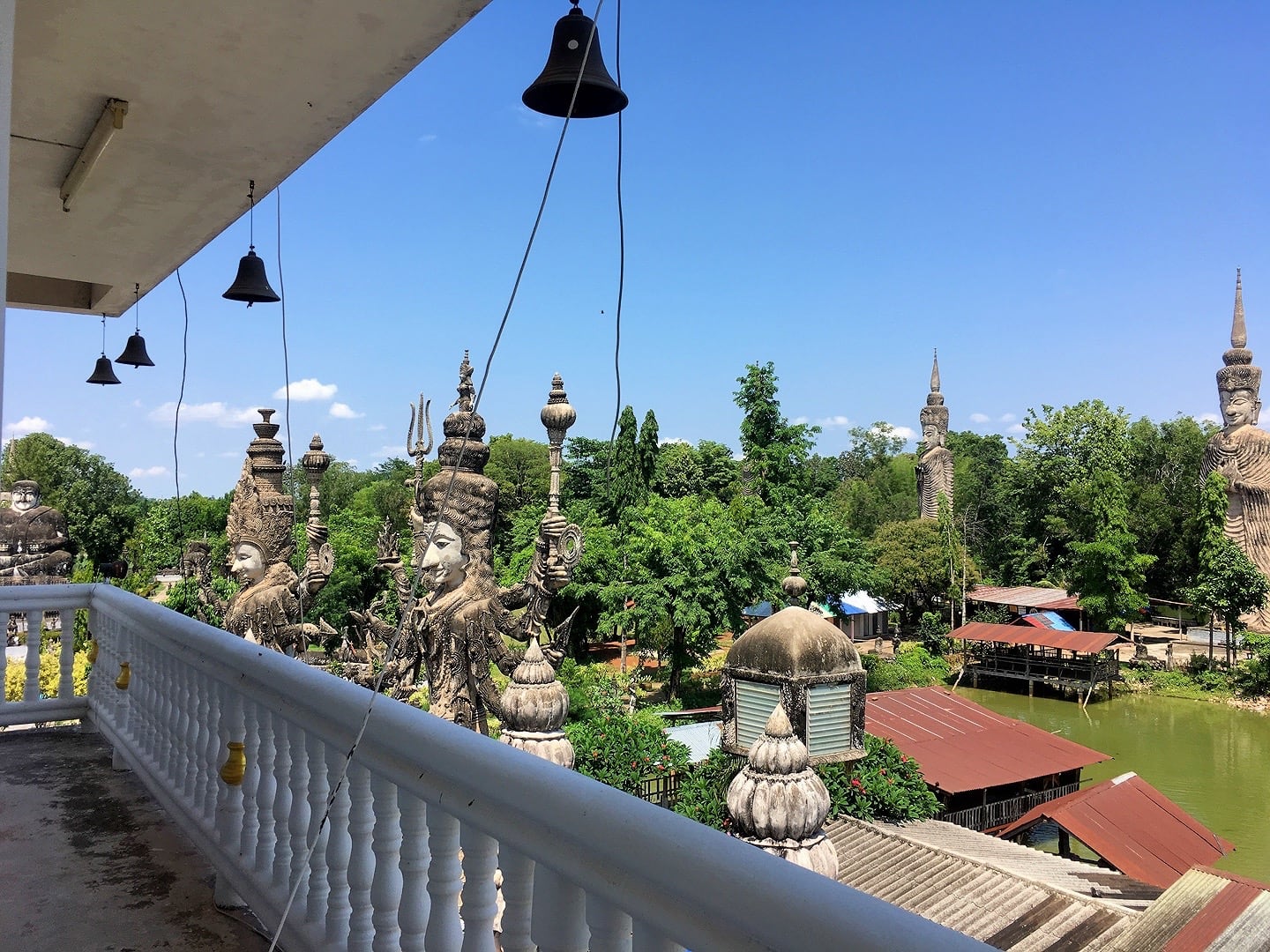 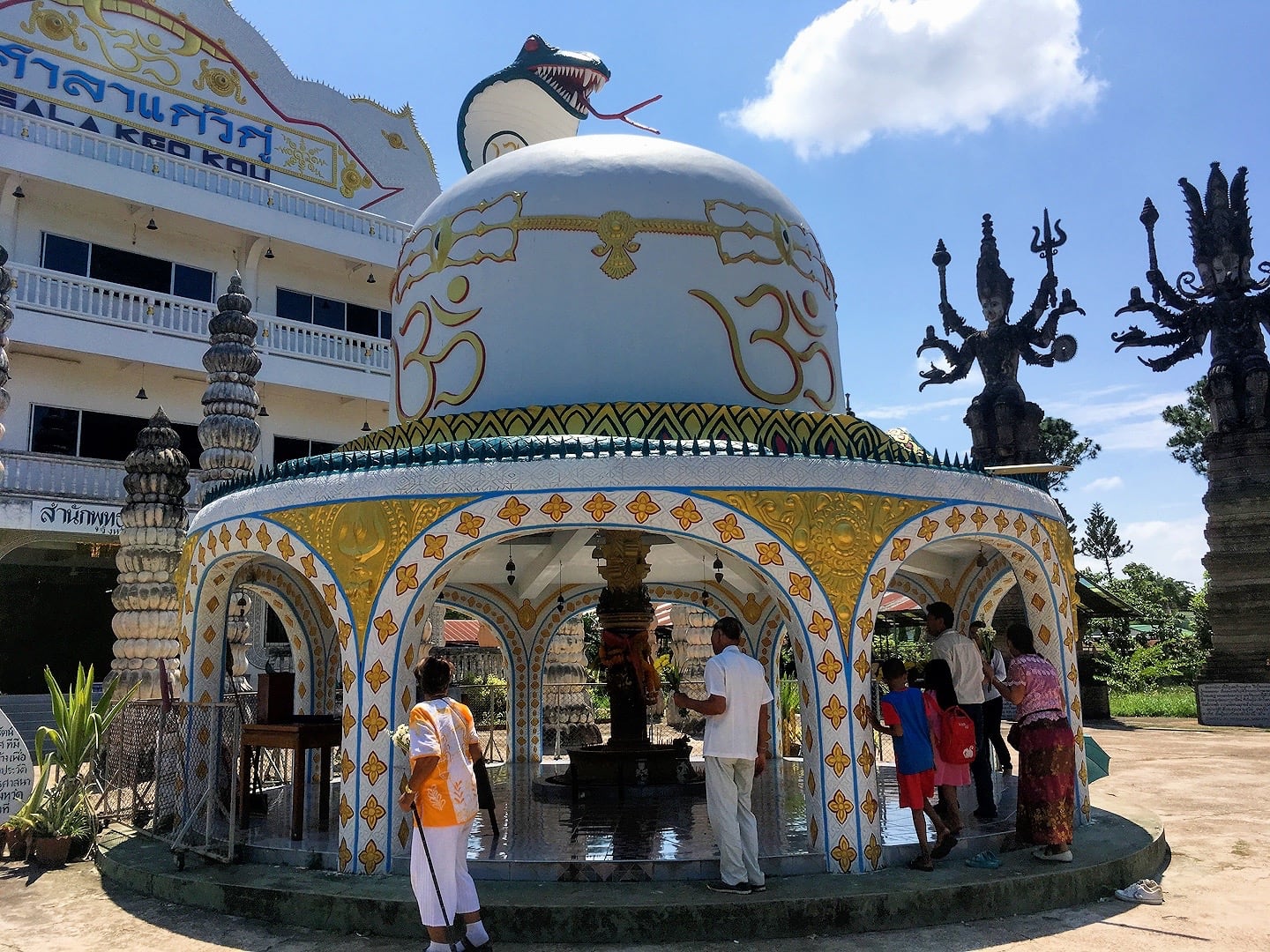 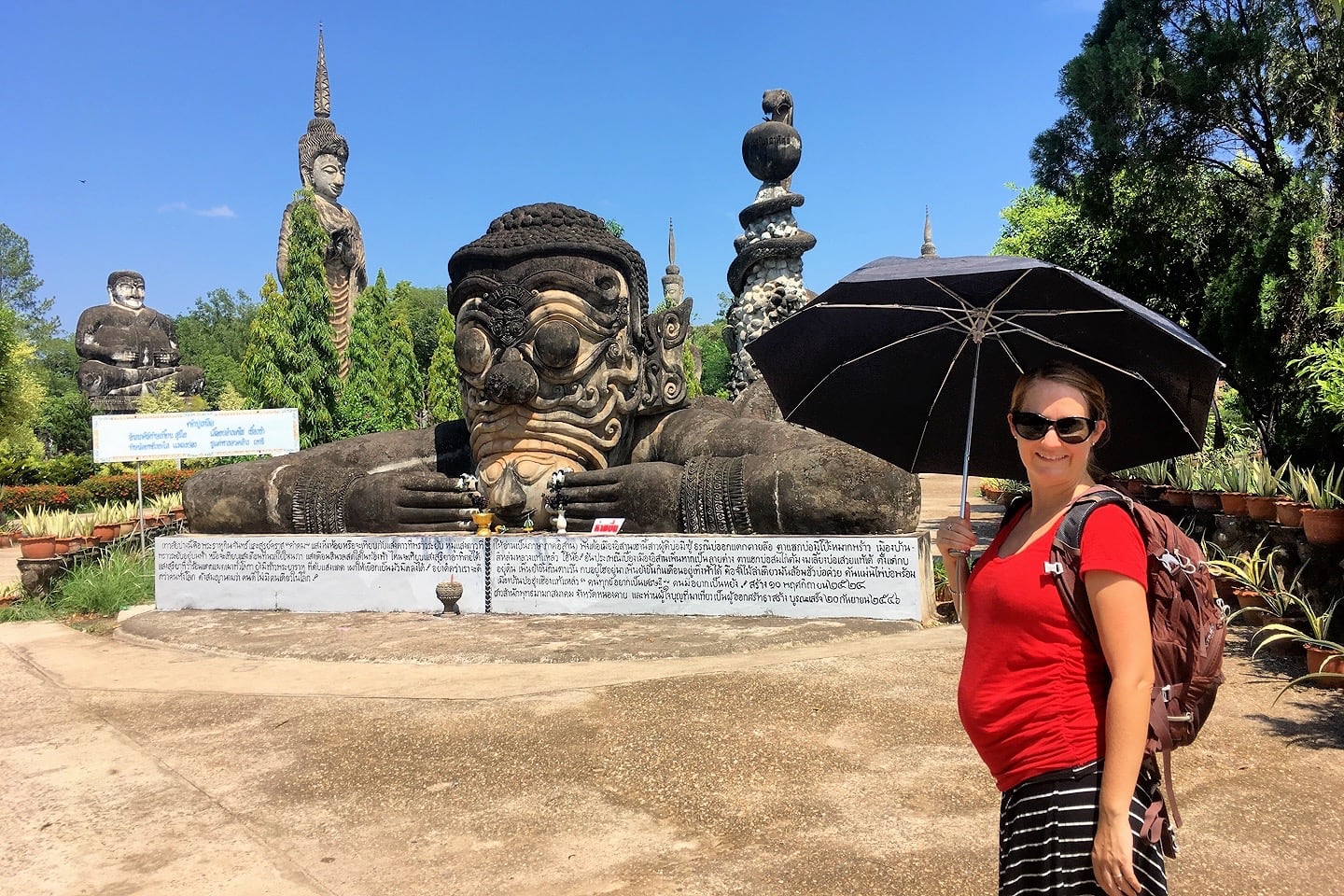 Heck yes, it was hot. Very hot. Noe and Lori were hot and sweaty, but that’s not saying much these days. However, I was hot and sweaty, and I don’t get uncomfortably hot very easily, even living across the river in Laos, but today was different.

Brilliant sunshine following a good rain at midday approaching the summer solstice in the tropics is a perfect recipe for things getting steamy. 118 F heat index when I took this pic, if you’re curious.

I’m not sure how much water we consumed, but it was easily more than we would generally take on a 10-mile hike up a mountain in the Pacific Northwest in August.

All that to say, no matter what time of year, it pays to get to the park early. The best time of day to visit is right when the park opens at 8am, or an hour before closing (5 – 6pm). 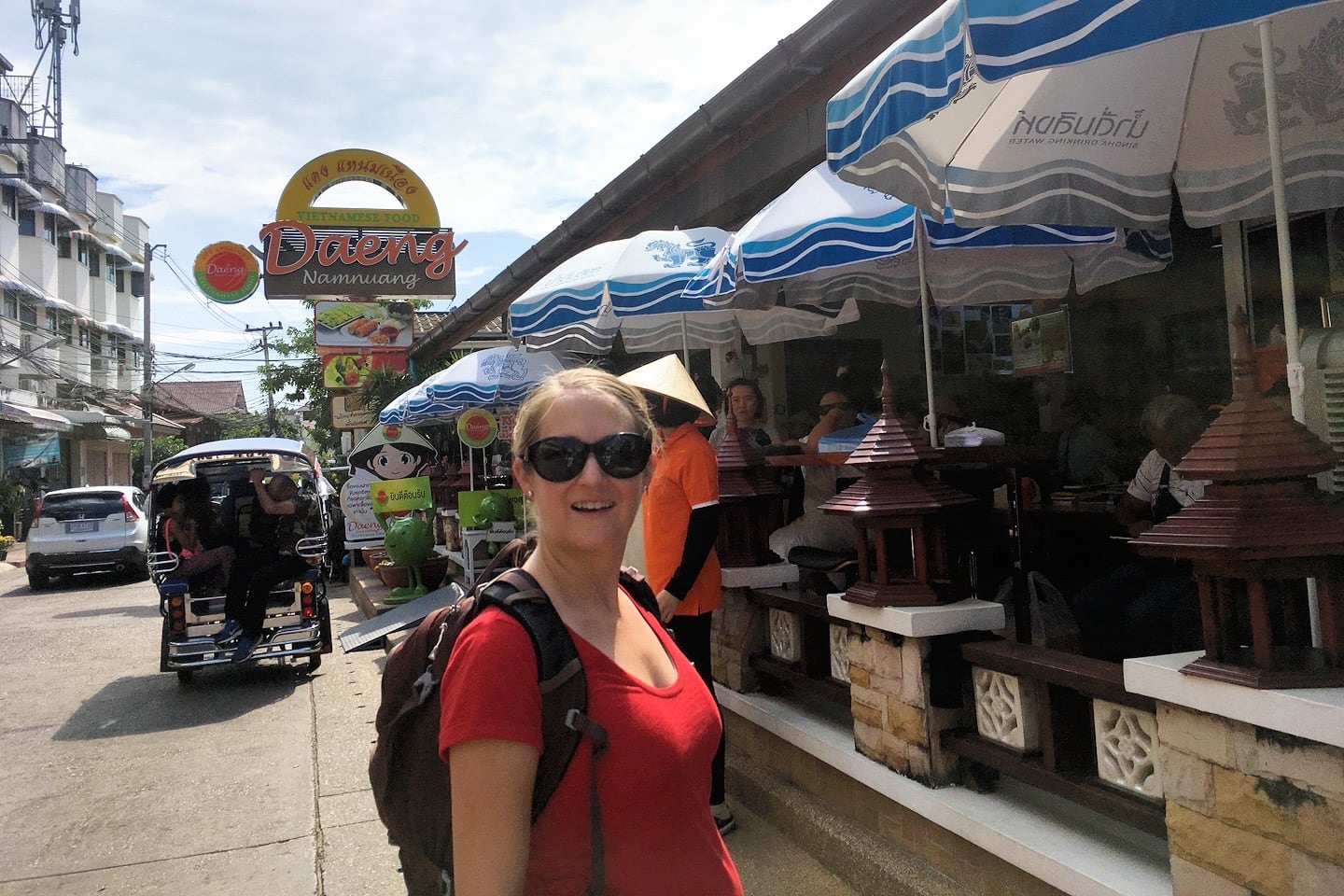 Where to Eat Near Sala Keoku

Following a fun and hot morning poking around the Buddha statues, it was time to cool off and feed the bellies (all four of them!).

And, where do people in Isan go when they get hungry, especially on a Sunday? Daeng Namnuang Vietnamese, of course! Find it on the map.

And yes, it was Daeng good. 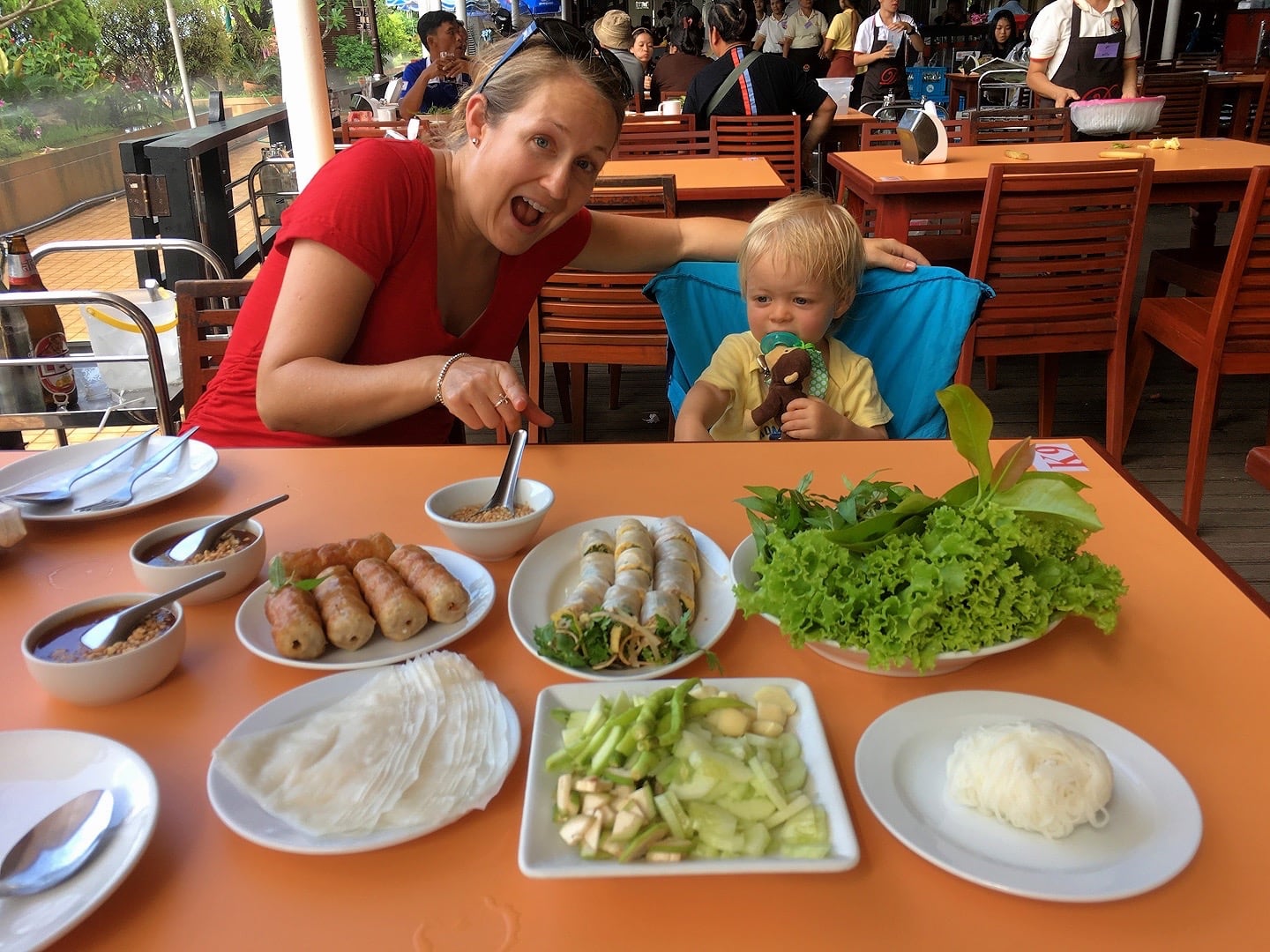 Daeng has become a regional institution akin to what In-N-Out Burger or the Cracker Barrel is to travelers in the U.S.

In Vientiane, we most certainly take the abundance of excellent Vietnamese food for granted. In Thailand, it’s much harder to find.

Isan (and particularly the Udon Thani / Nong Khai region) is known throughout Thailand as THE place to get great Vietnamese food, due in large part to being home to the largest Vietnamese community in the country. 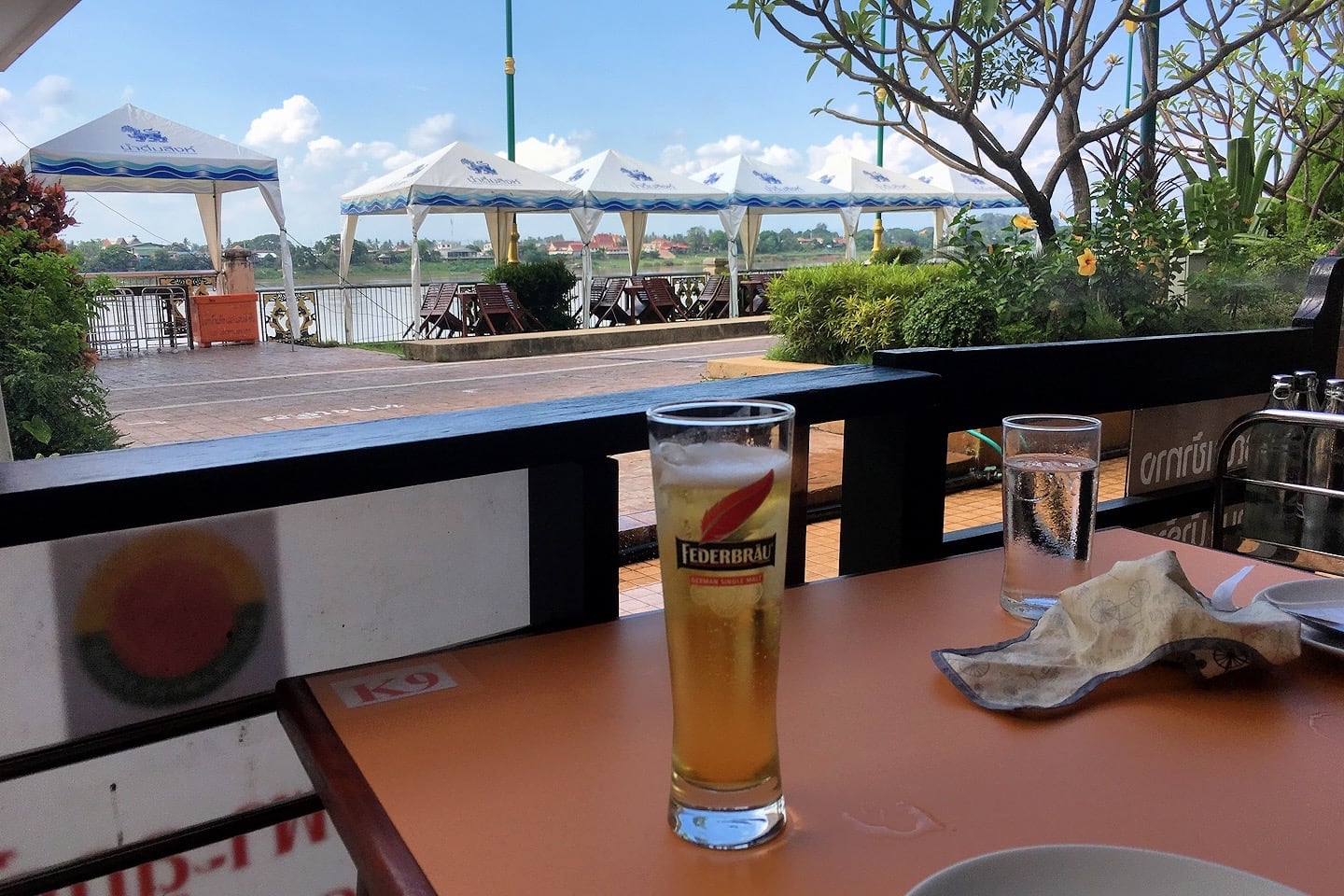 Admittedly, there was something very surreal about sitting on the Thai side of the Mekong looking back at Laos after 20 months of doing the opposite and wondering about the other side.

Have You Visited Sala Keoku Park? 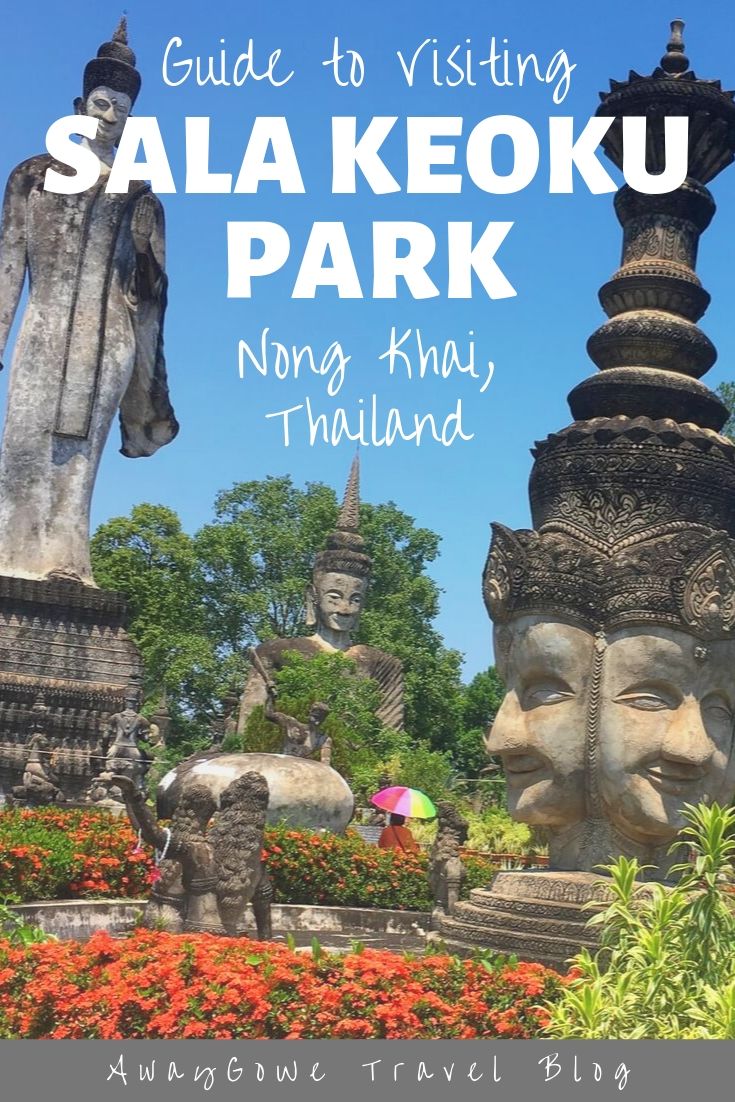 2 thoughts on “Visiting Sala Keoku Park: A Guide for Travelers”