That Luang Festival: An Insider’s Guide for Travelers

That Luang Festival is the most important religious festival in Laos. Find out when to visit, what to do, where to stay, and more!

That Luang Festival is considered the most important Theravada Buddhist festival in Laos — a time for topping up merit and paying respects to the Grand Stupa.

In this article, we share our experience visiting the festival over two different years, offer insight into some of the celebrations and observances, and share helpful tips and essential information for visiting.

(Psst…don’t miss our top Vientiane lodging picks at the end of this post.) 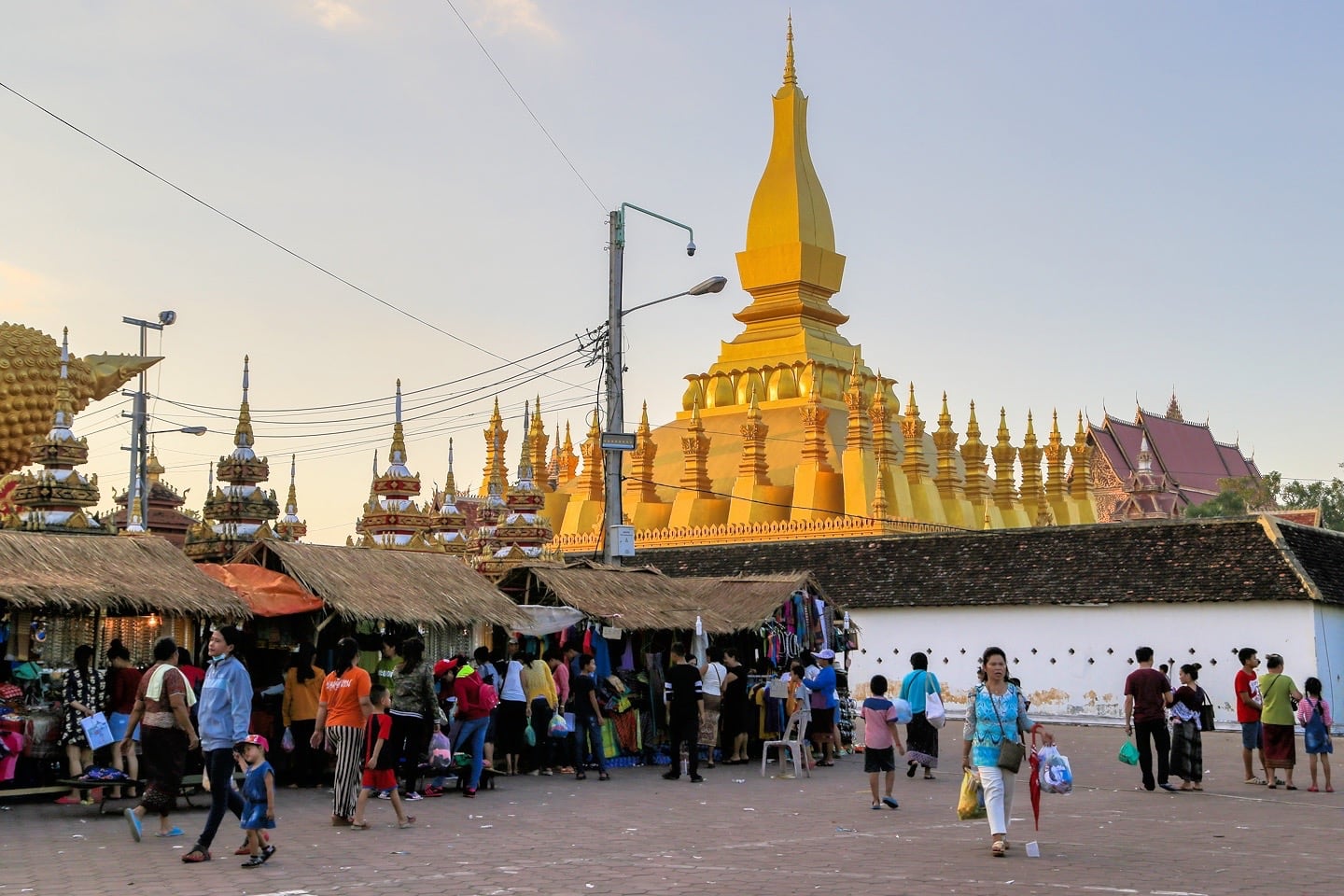 What Is That Luang?

Pha That Luang (pronounced pah taht l’wong) is the most important religious monument in the country, and perhaps the most iconic. That Luang appears on everything from Laotian currency to tourism marketing materials.

Stupas such as That Luang are found throughout the Buddhist world. The most important ones are shrines to relics of Buddha. It is believed that That Luang houses the Buddha’s hair and breast bone (sternum).

That Luang is a symbol of the resiliency of the Laotian people and nation, as its long history — much like the nation’s — is marked by a continuous cycle of triumph and turbulence.

Originally built as a Hindu temple in the 3rd century, its significance was forever changed when Buddhist missionaries brought the holy breast bone relic to the stupa after the death of Buddha.

When the king of Luang Prabang moved his capital to Wieng Chan (Vientiane) in the 16th century, he ordered the relocation and reconstruction of That Luang 4km from the city center.

However, moving the stupa did not improve its odds of survival, as it was plundered and raided repeatedly by the Burmese, Siamese, and Chinese from the mid-17th to mid-19th centuries.

That Luang was abandoned until the French restored its original design in 1900, though this was unsuccessful and had to be reconstructed in the 1930s. Again, the stupa was heavily damaged during the Franco-Thai War but finally reconstructed to what we see today after the end of World War II.

I dare you to find another landmark anywhere else in the world that has such a long and tumultuous history. 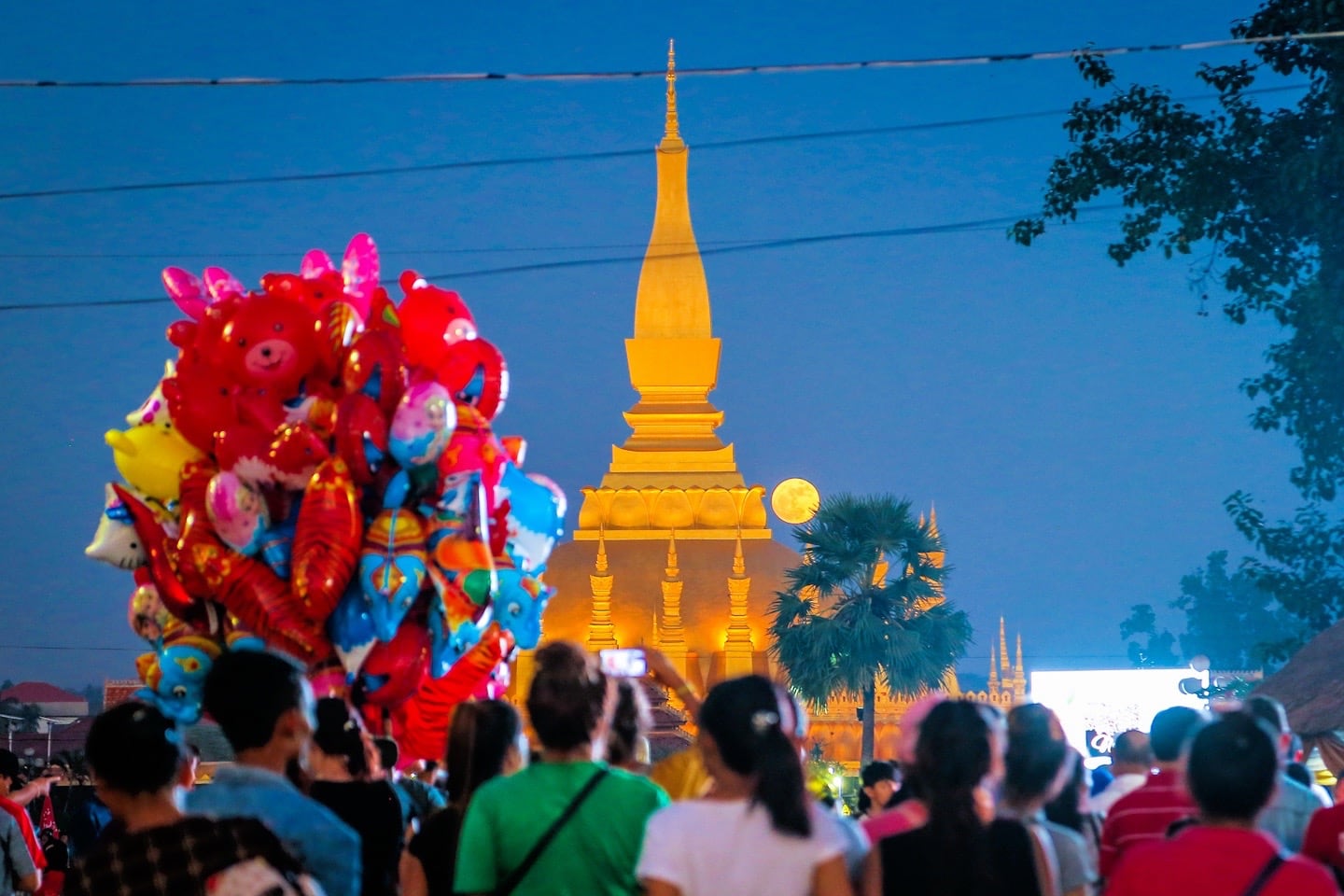 When Is That Luang Festival?

Boun That Luang (Festival of the Grand Stupa) occurs each year between late October to mid-November of the Gregorian (Western) calendar. The date of the next few That Luang Festivals are listed below, with the date of the full moon in bold:

Finding official information in English for That Luang Festival dates is notoriously challenging. These dates are based on our interpretation of the Buddhist calendar, and confirmed by a Laotian friend. However, if you find that we’ve made an error, please let us know ASAP (with a link to an official source) so we can correct the information.

It’s also important to note that, as the moon is not beholden to the workweek and government decrees, the religious festival happens in accordance with the lunar schedule. Generally, Laotians will get a national holiday around the time of the festival, but the dates and number of days are decided on a year by year basis.

Where is the Festival Located?

That Luang Festival is held each year in Vientiane, Laos, in two locations over three days: Wat Si Muang the first evening, and Pha That Luang (Grand Stupa) the next two days (see map). 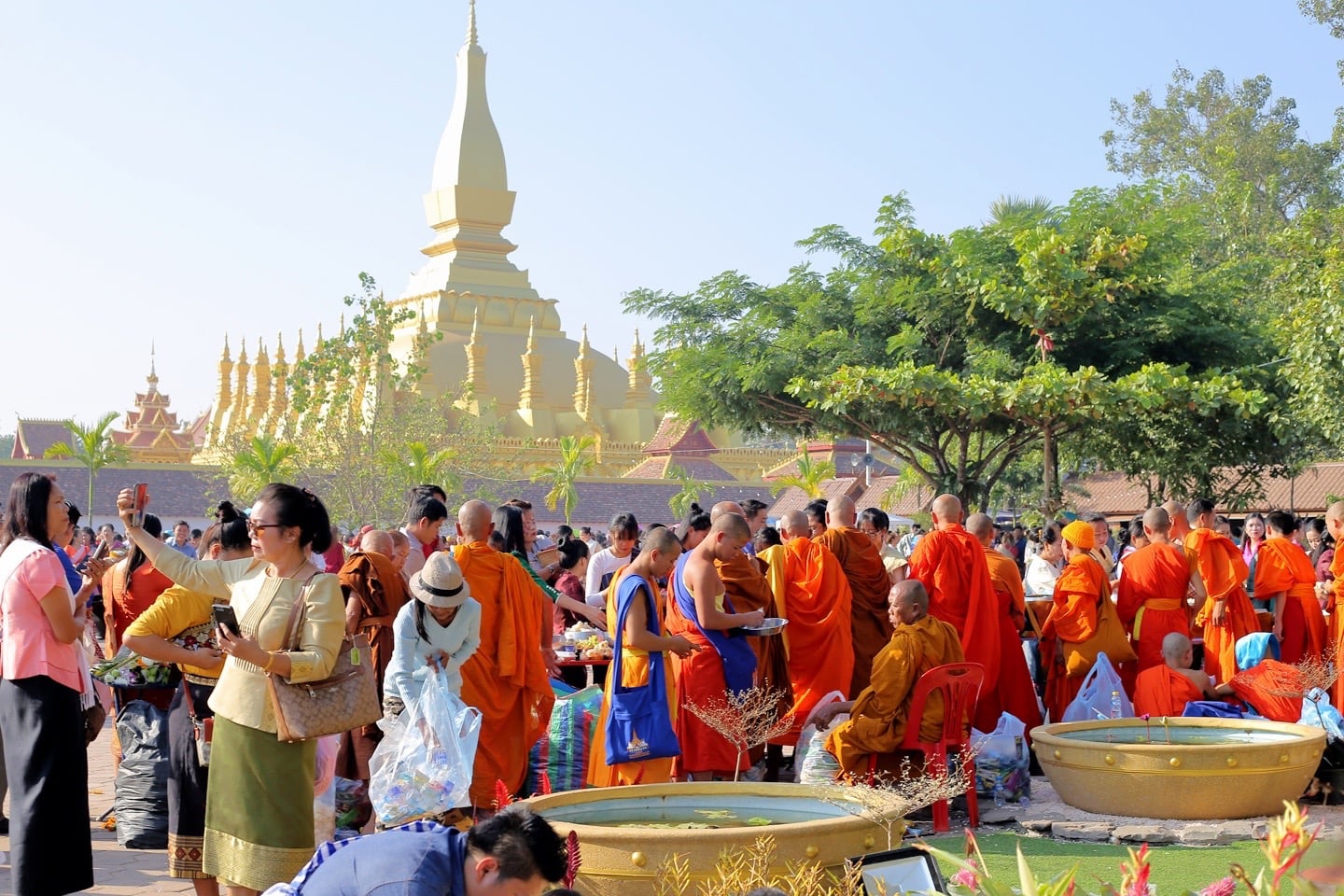 What Is That Luang Festival?: What to Expect

For three days during the twelfth lunar month, Laotians from all corners of Laos descend on Vientiane to celebrate the Festival of the Golden Stupa (Boun That Luang).

Like many Buddhist holidays in Laos, it’s a time for worship, celebration, spending time with family, and dressing in your festival best.

Each of the three days is marked by different activities and observances, which are discussed in further detail below. 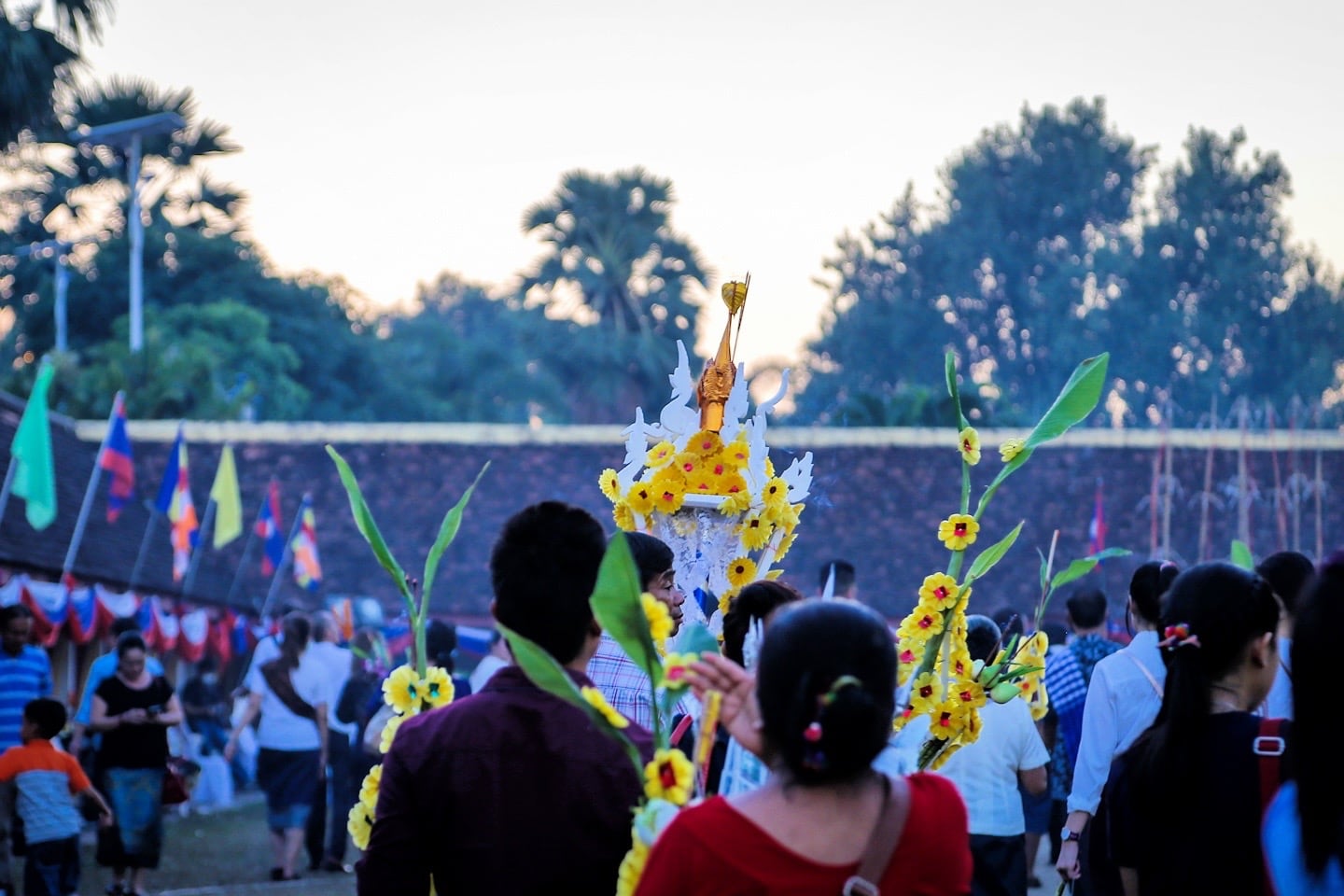 The That Luang Festival doesn’t actually start at the stupa, itself, but another important Buddhist landmark in Vientiane, Wat Si Muang.

The next afternoon, crowds descend on That Luang with their wax castles for the first procession around the Golden Stupa. This is the main day for family gatherings and cultural events around That Luang and the rest of the city. 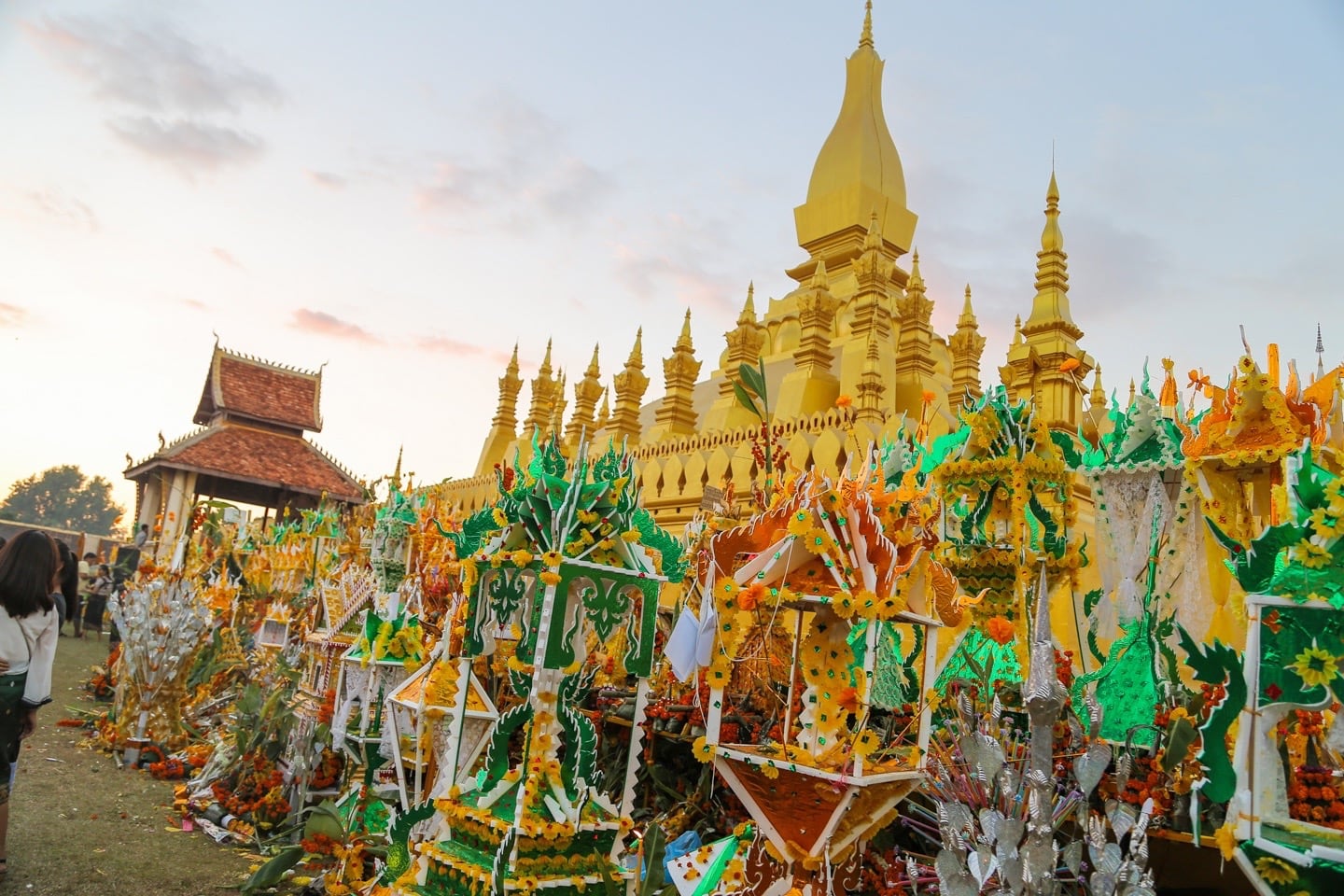 Beginning before sunrise of the final day, crowds gather at That Luang for tak bat, or monks almsgiving. This is a time of spiritual reflection and honoring the ancestors with water and prayers.

Later in the morning, families gather on the temple grounds surrounding the stupa for traditional picnics. 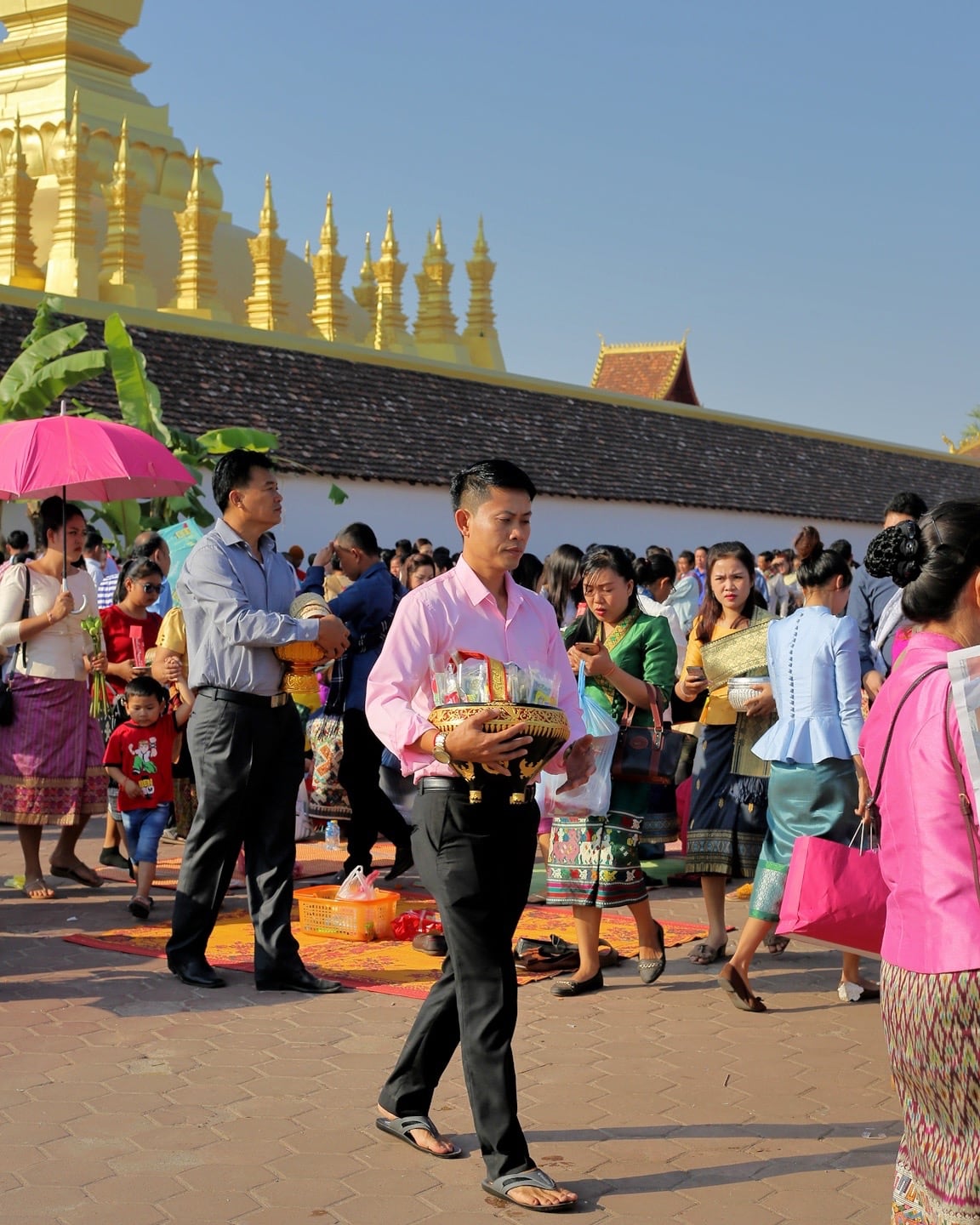 The devoted bring their family offering bowl loaded with an assortment of consumables for the monks and to pay homage to the ancestors. 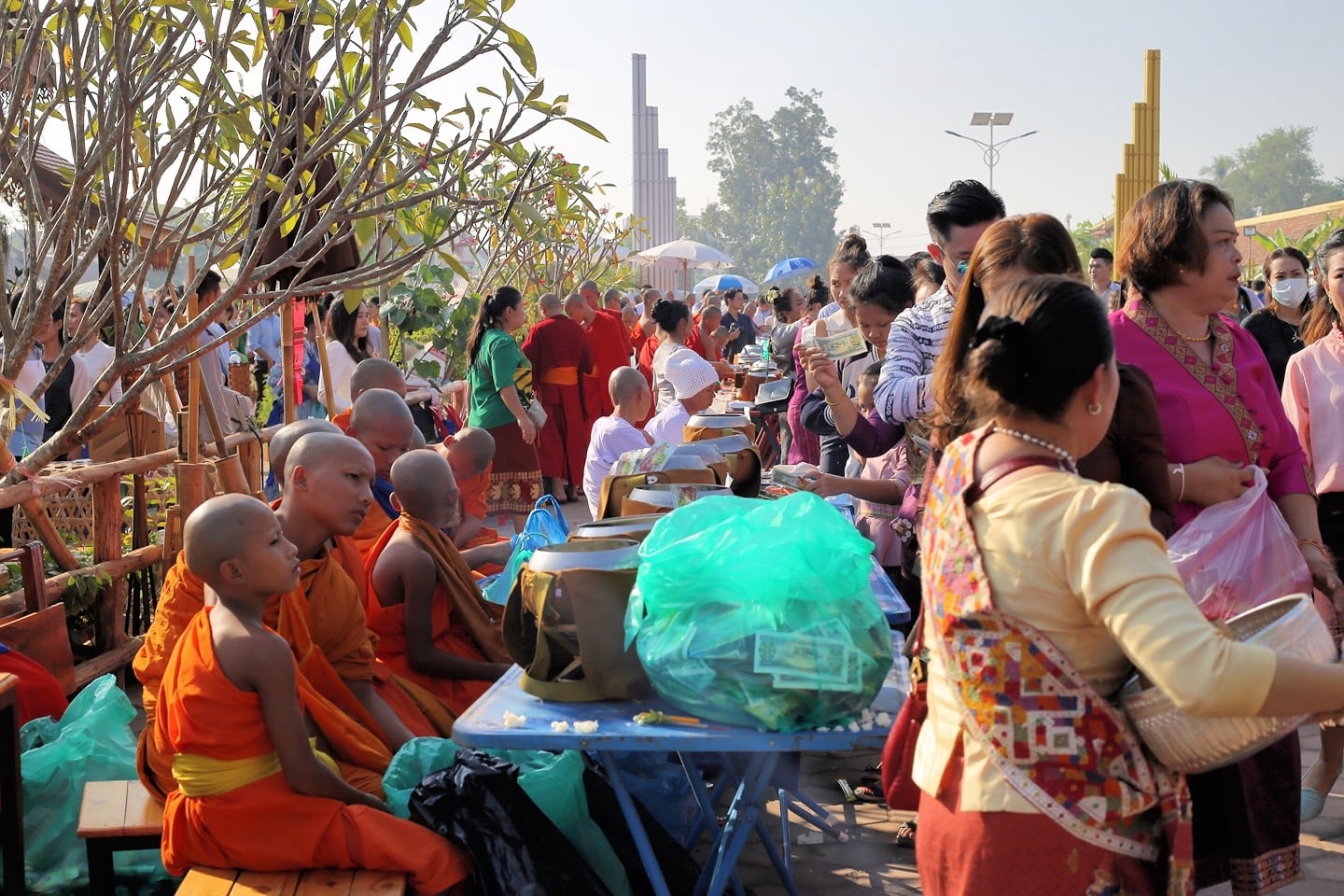 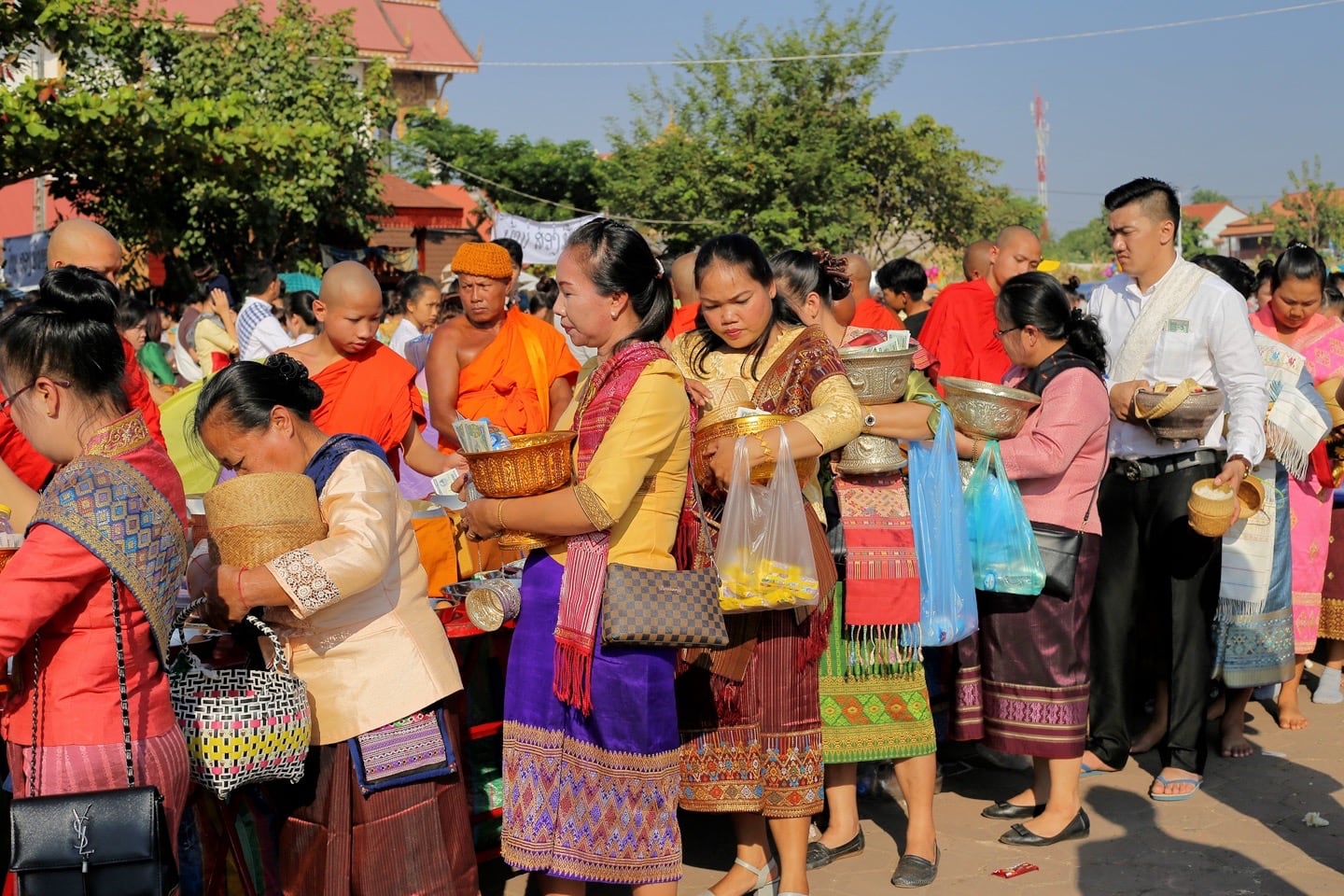 People wait in long lines for the opportunity to present their offerings and receive a blessing on this important occasion. 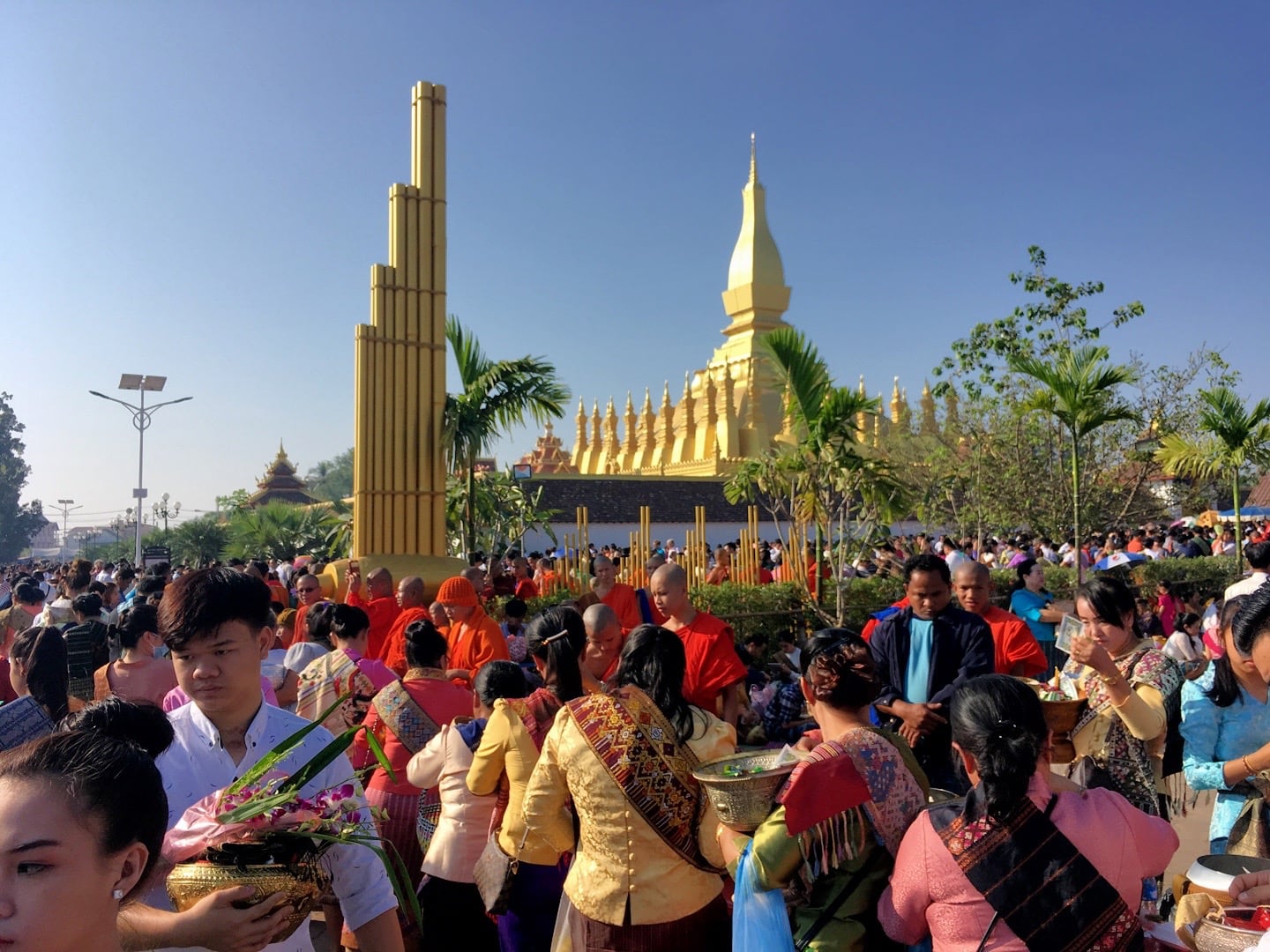 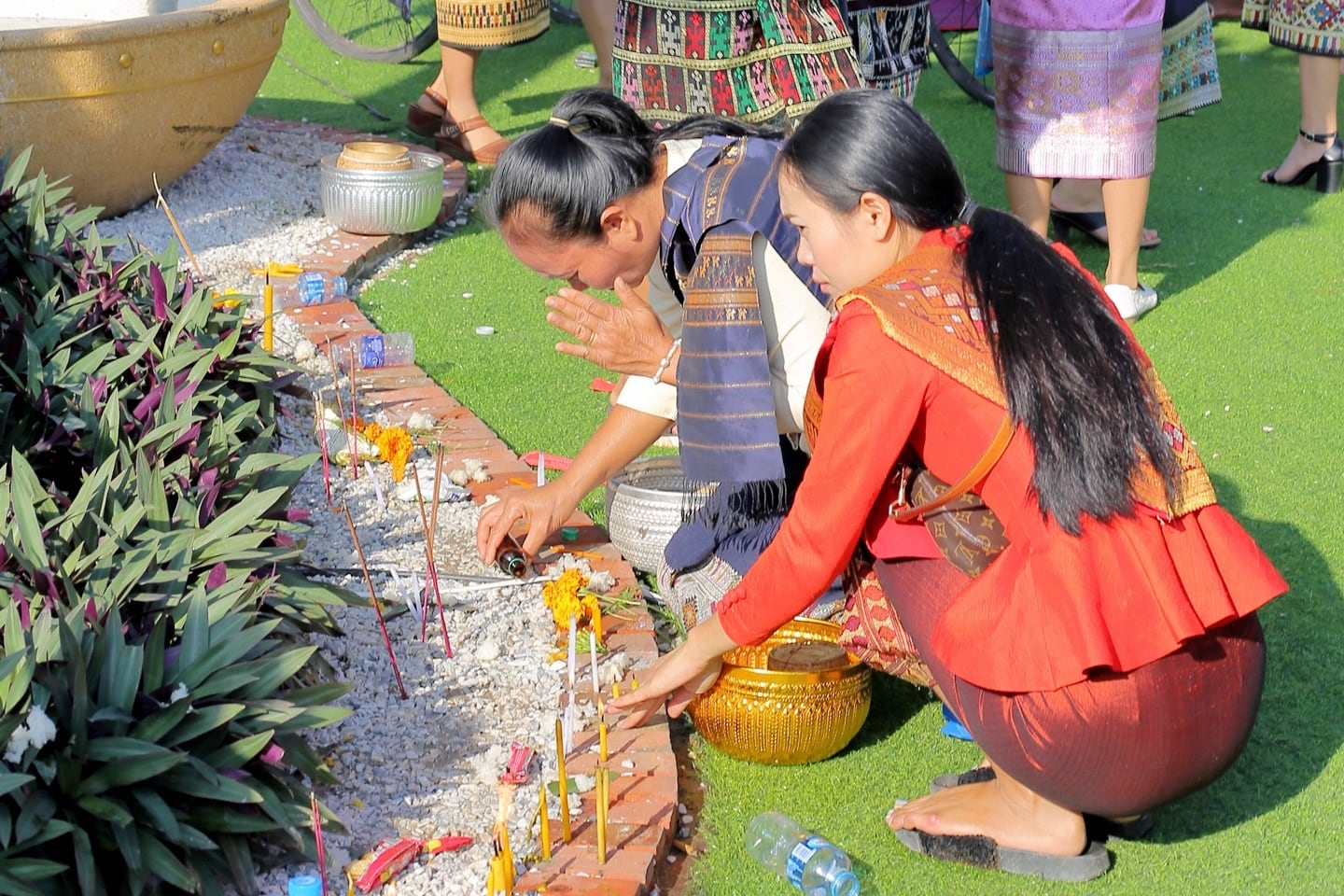 Some leave small offerings around the complex for the spirits of family members who have passed on. 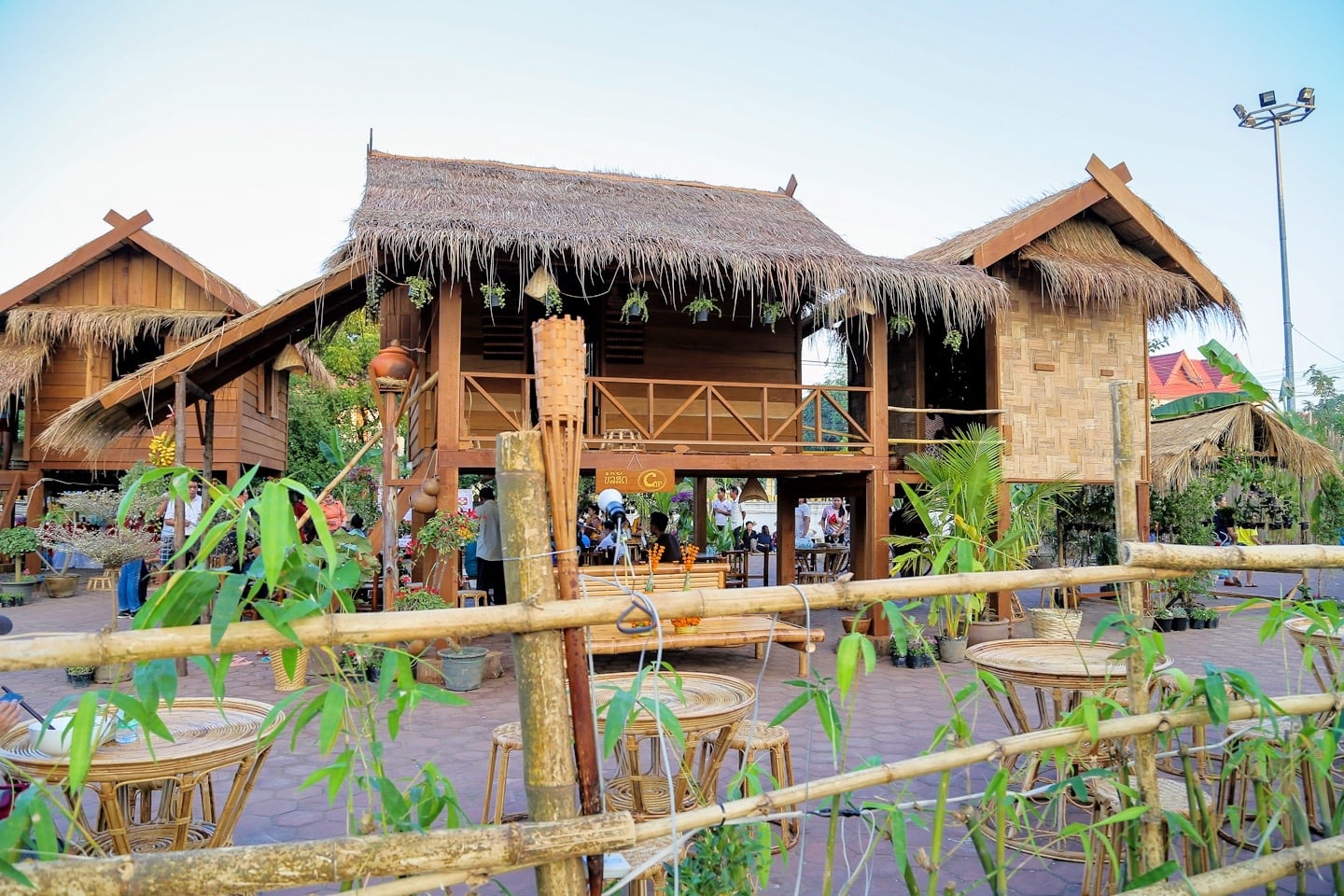 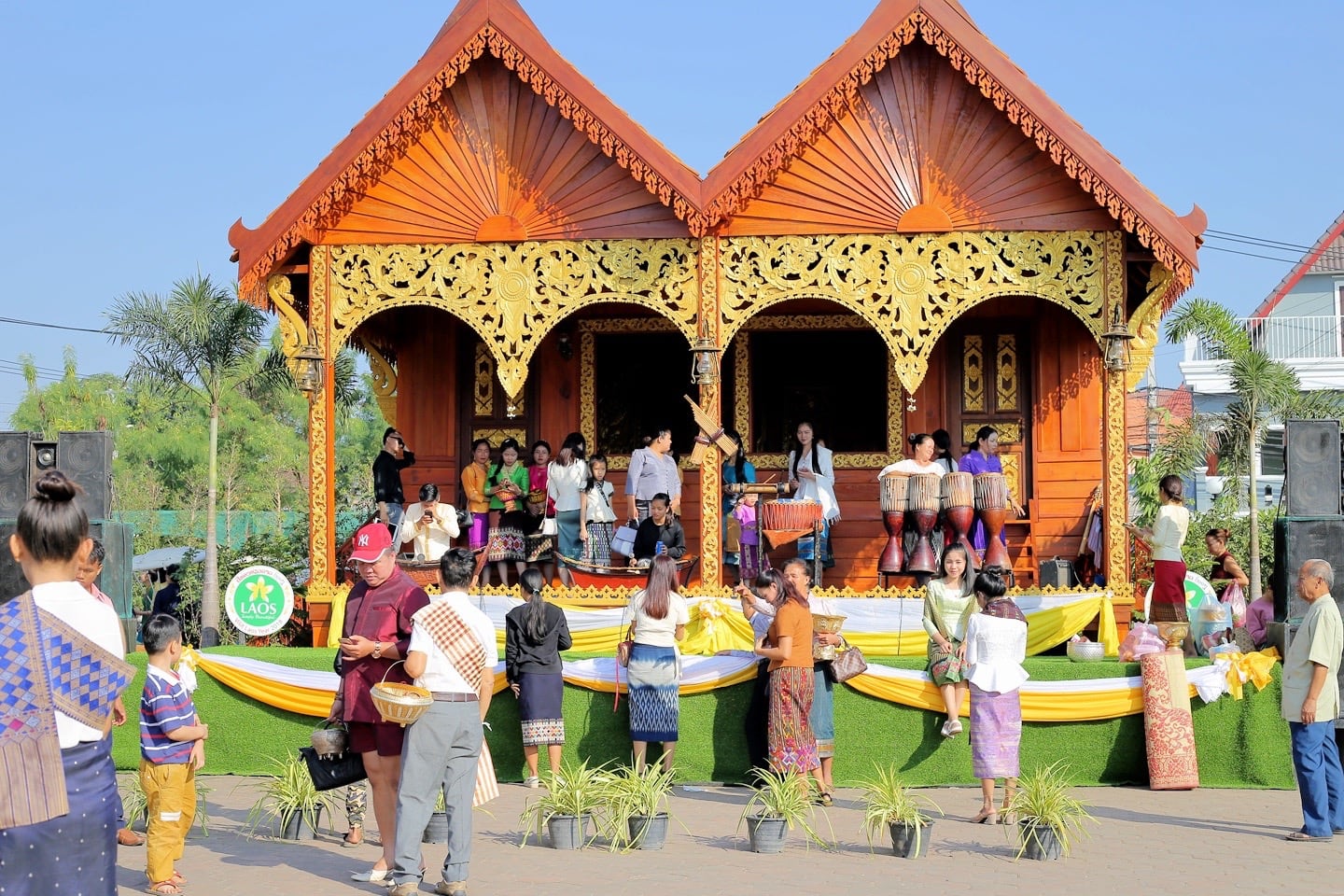 There is also live music using traditional instruments as part of the folk heritage exhibit. 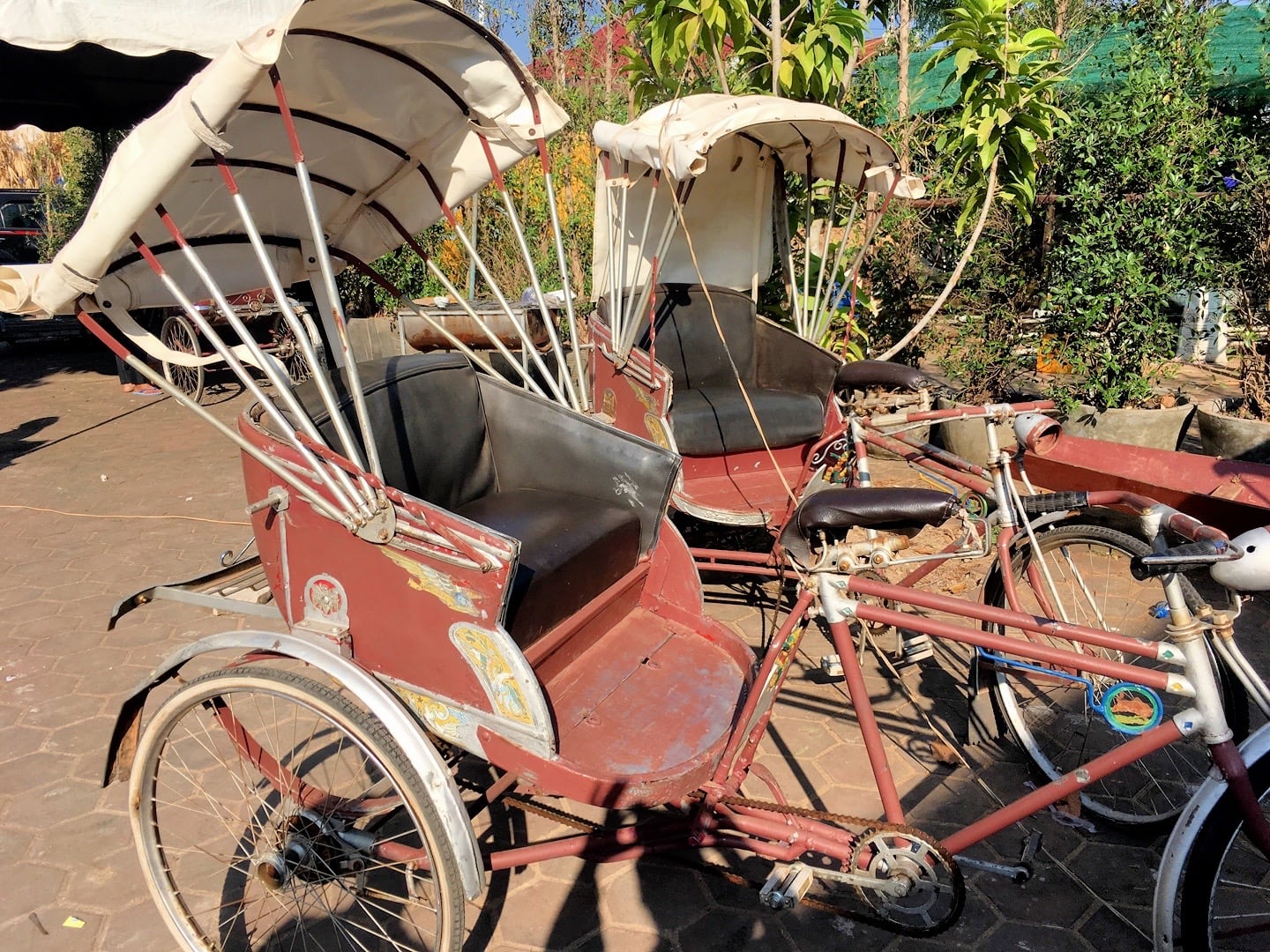 Completely replaced by tuk-tuks, pedicabs are a relic of the past in Vientiane. At That Luang during festival time, however, there are a dozen on hand for photo-ops. 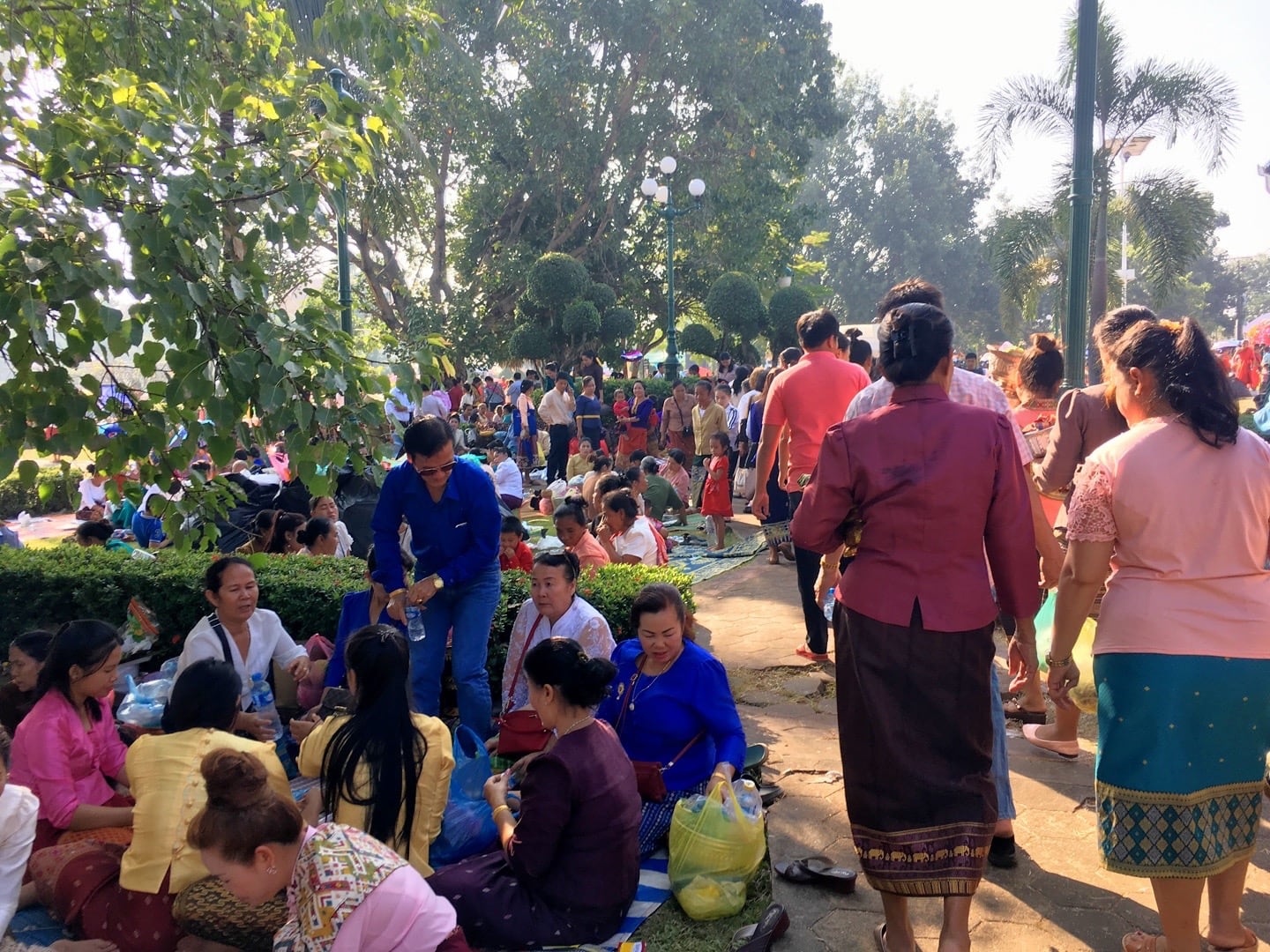 Families convene for a traditional picnic on the grounds surrounding the stupa. 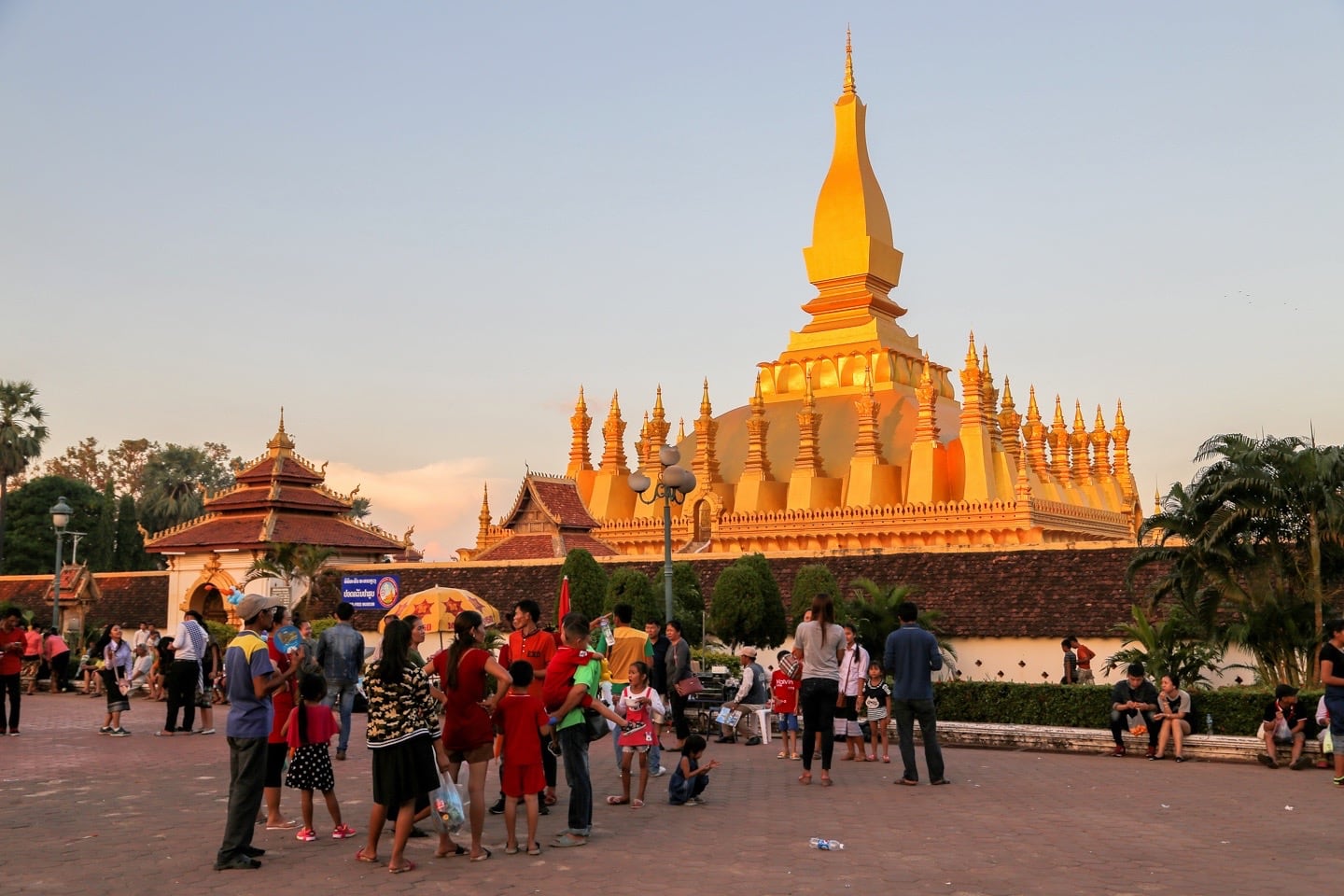 At the end of the third day of festivities, the devotion portion of the That Luang Festival winds down under a full moon with a candlelight procession around the stupa. 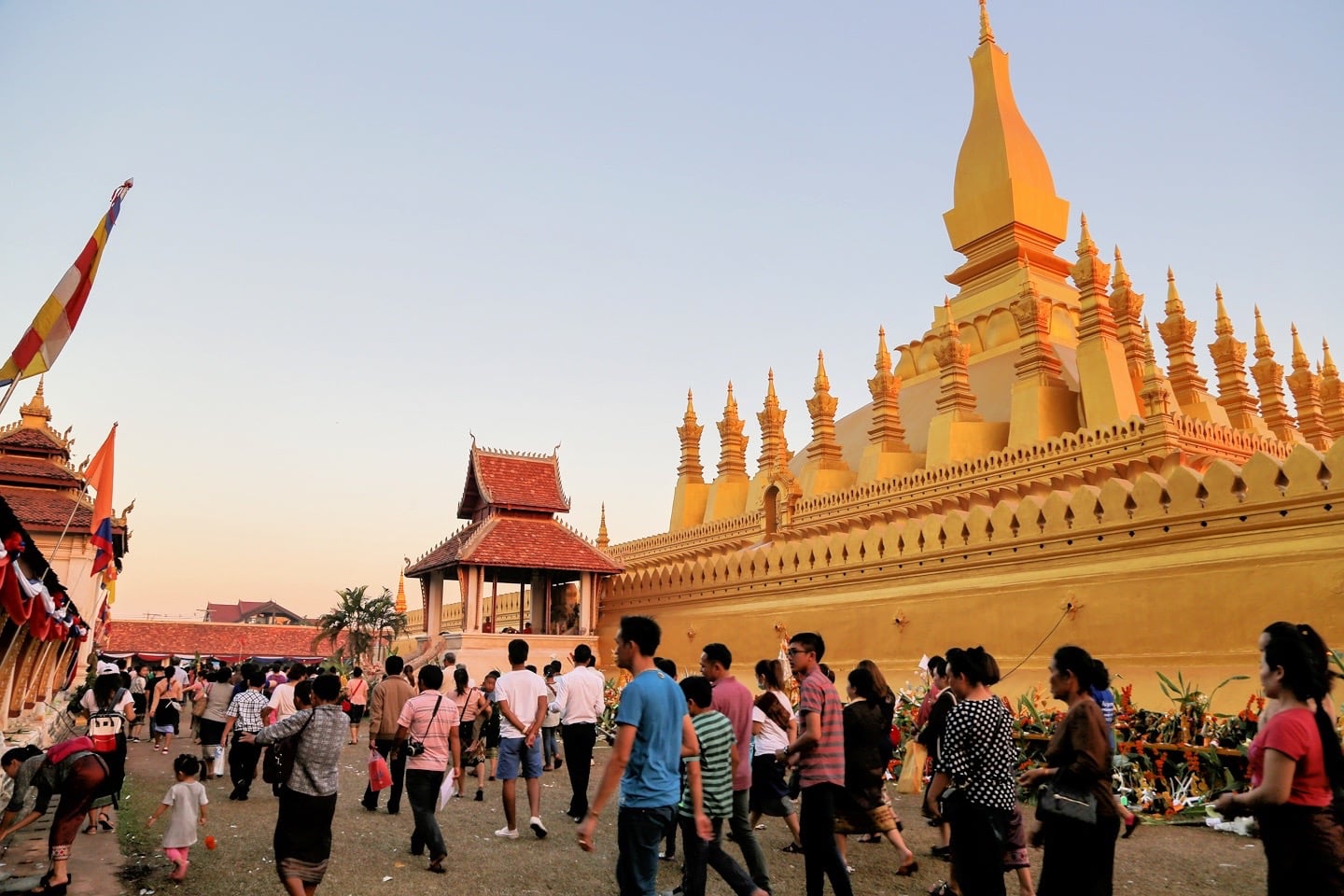 After entering the inner sanctum, devotees — carrying incense and candles — walk three times (clockwise) around the stupa in honor of Buddha. Women are required to wear a sinh (they are available for rent just outside the gate). 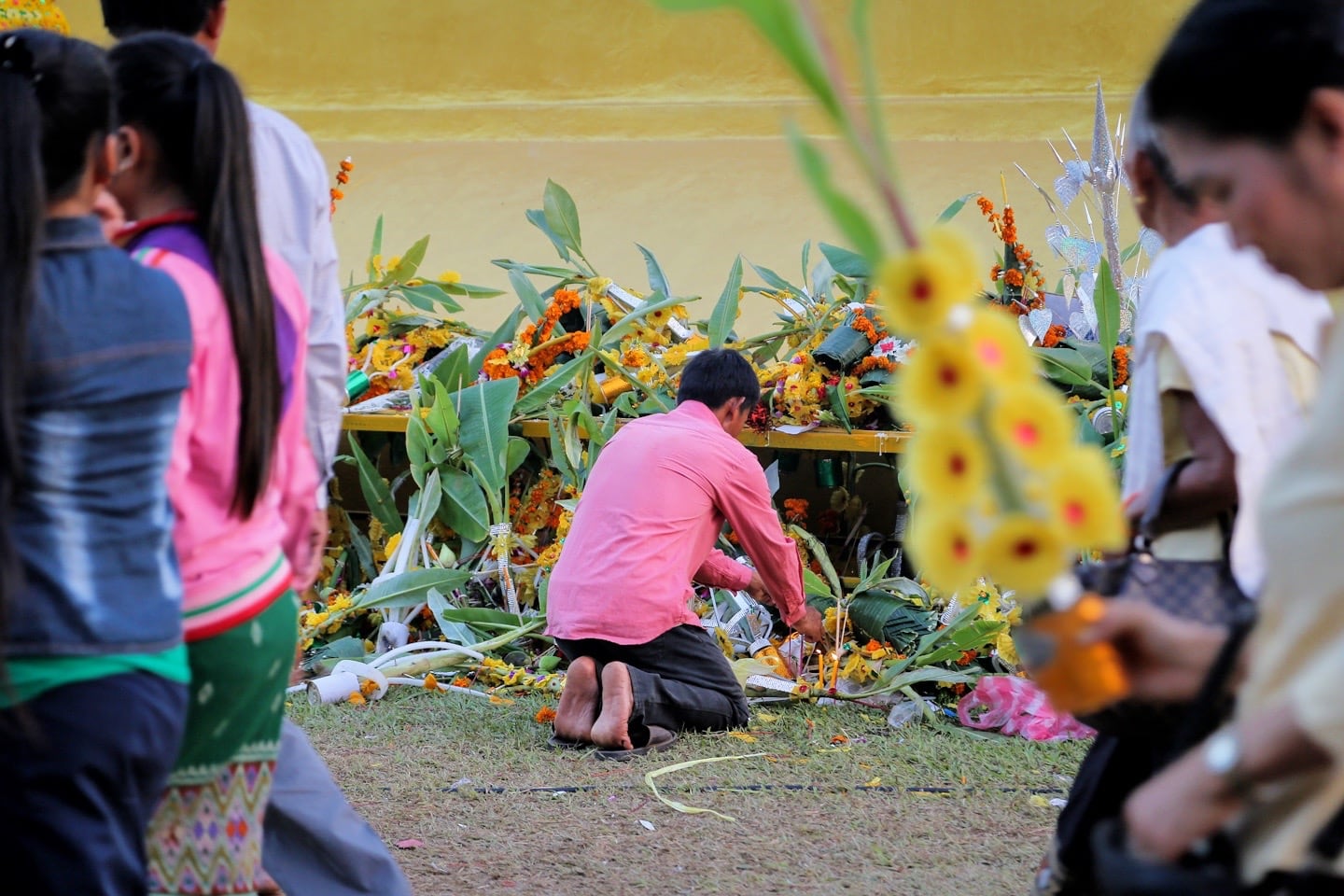 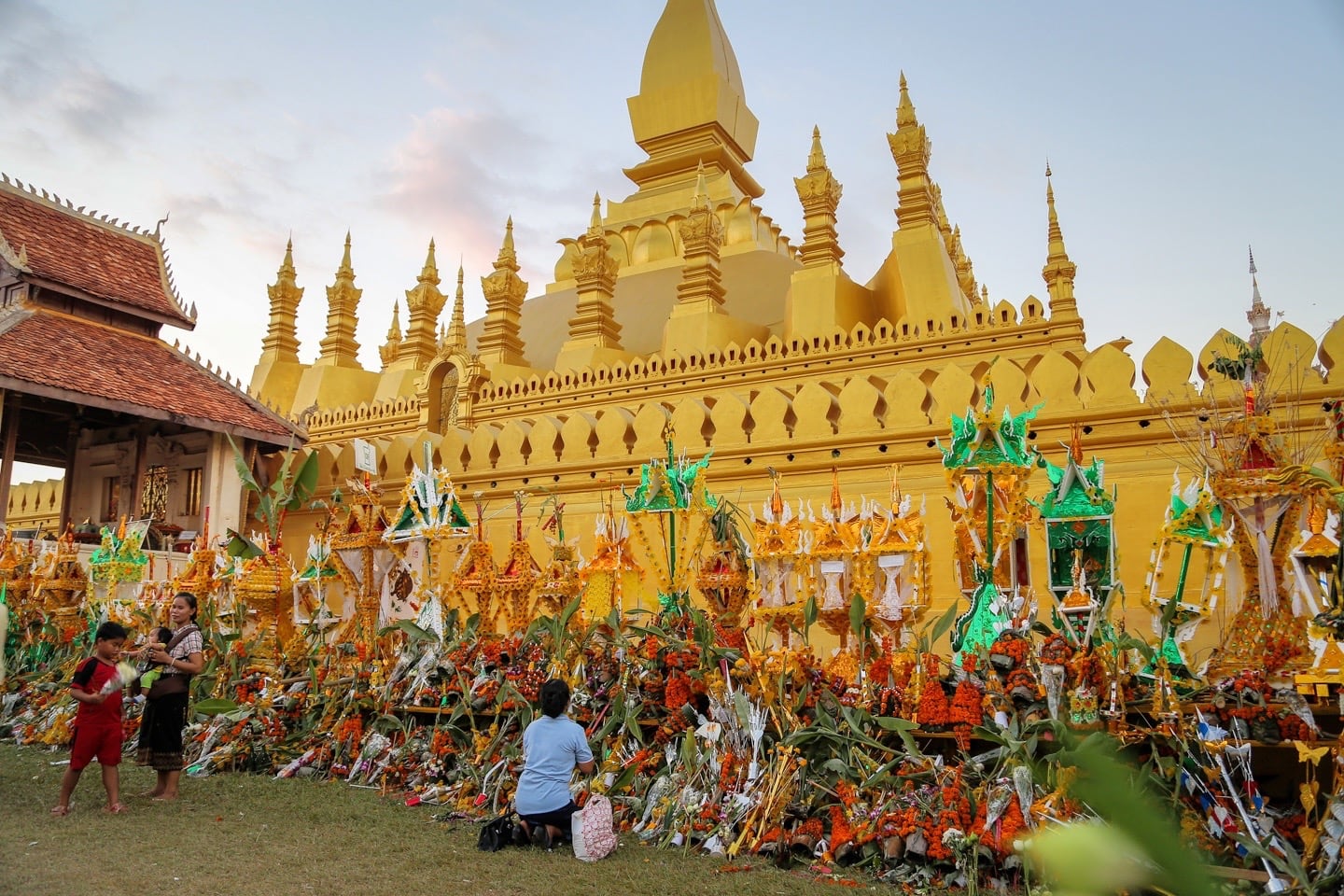 The stupa has accumulated a mountain of offerings around its entire perimeter from three days of festivities. 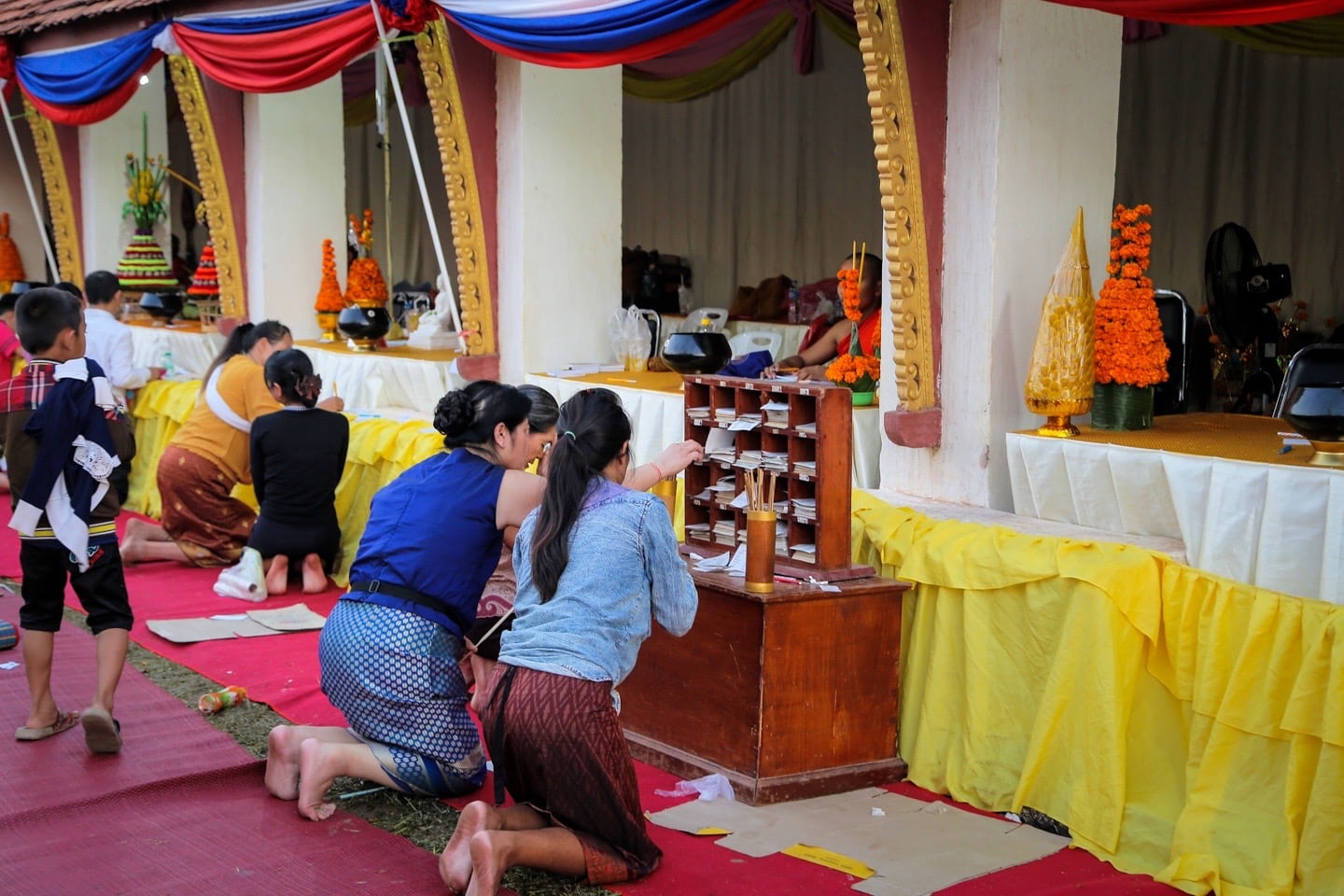 Devotees pause to write their hopes and wishes for the coming year on a piece of paper to be blessed by the presiding monks. An offering of kip notes is made to the temple. 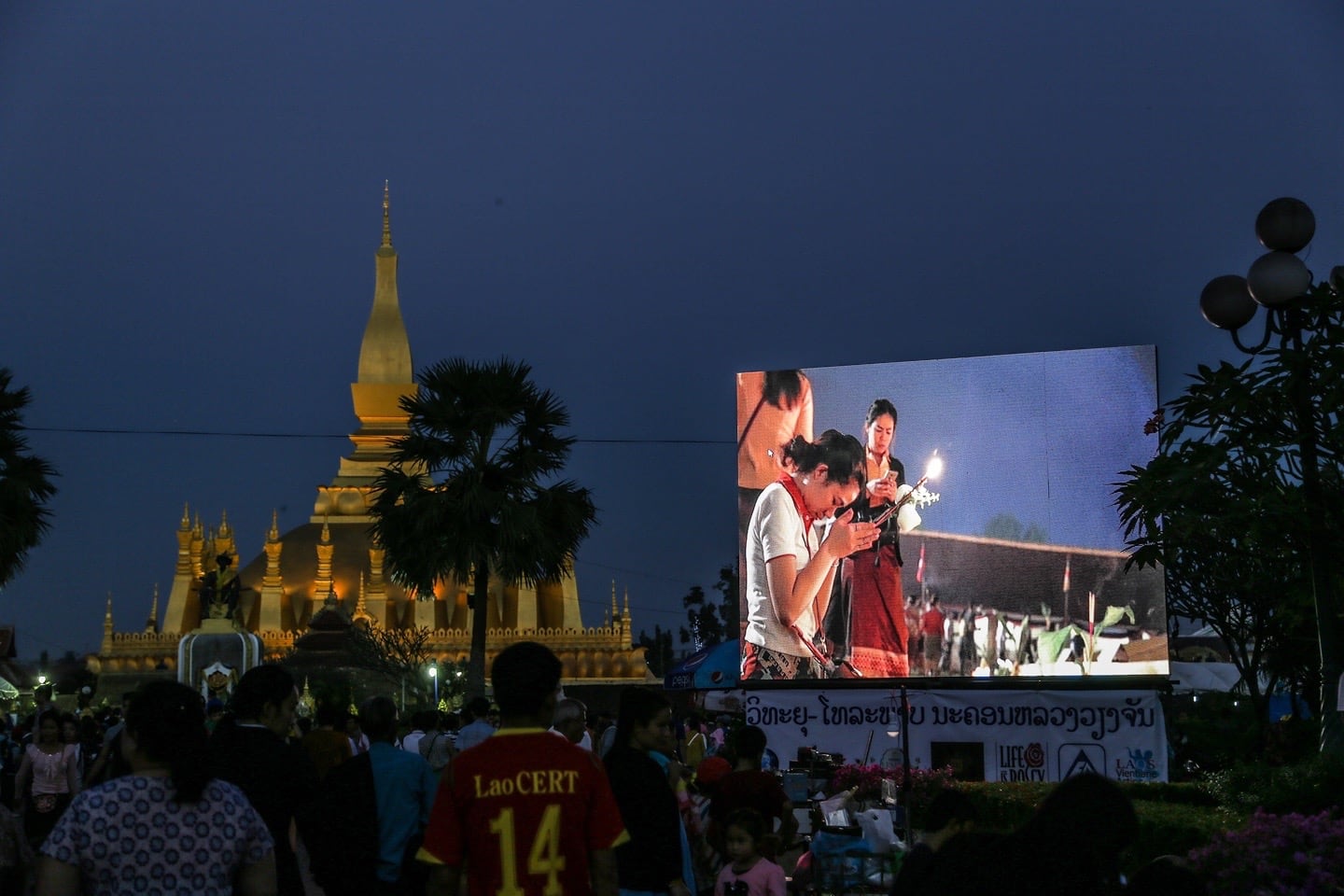 Outside of the stupa walls, the celebrations are quickly ramping up, with carnival rides and games, musical acts, and food. Families gather at food stalls to eat Khao Poun, the national rice noodle soup dish.

Meanwhile, live shots from inside the stupa walls are broadcast to the revelers on the outside. 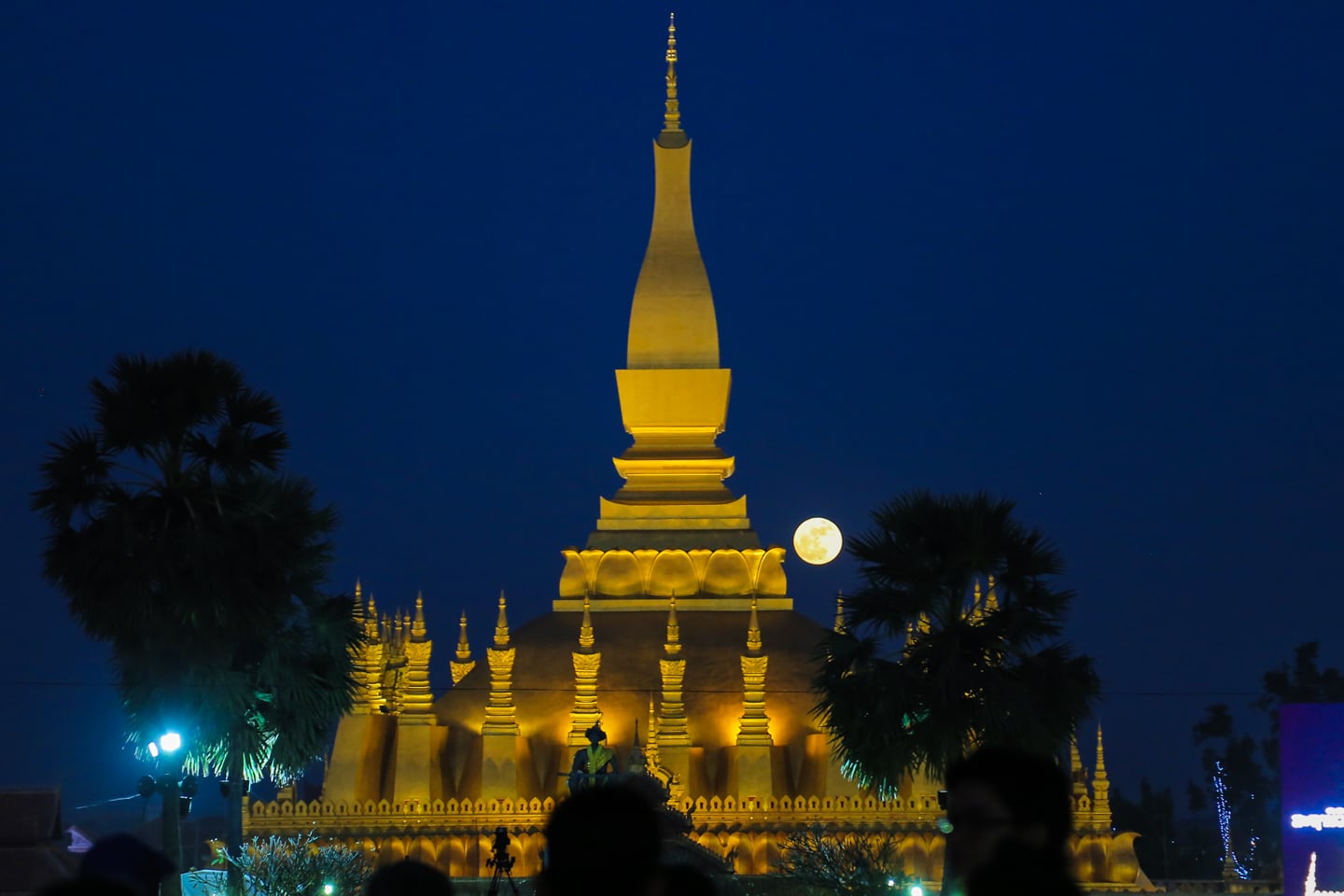 All the while, on this particular year, the super moon rises just over That Luang. Awesome. 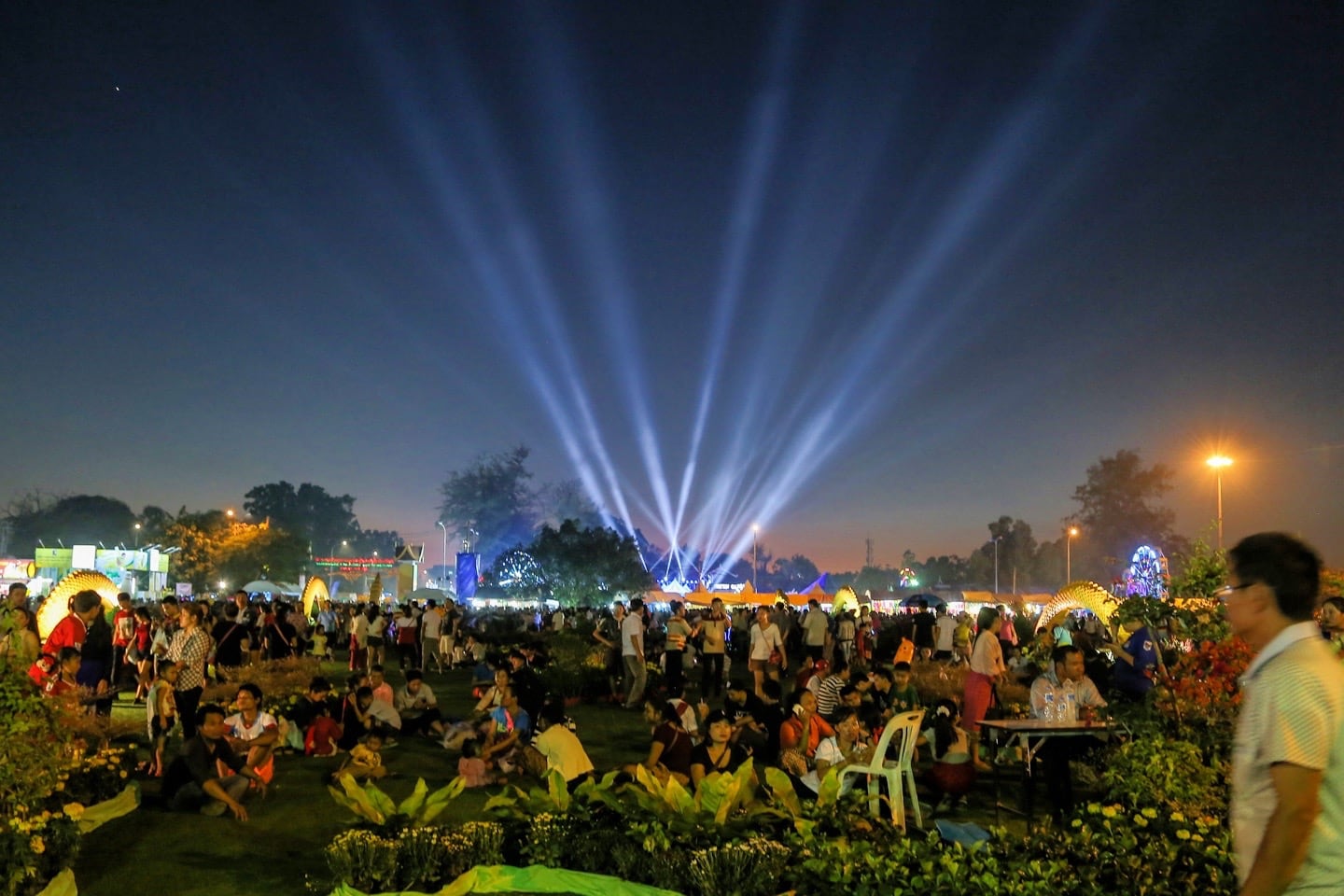 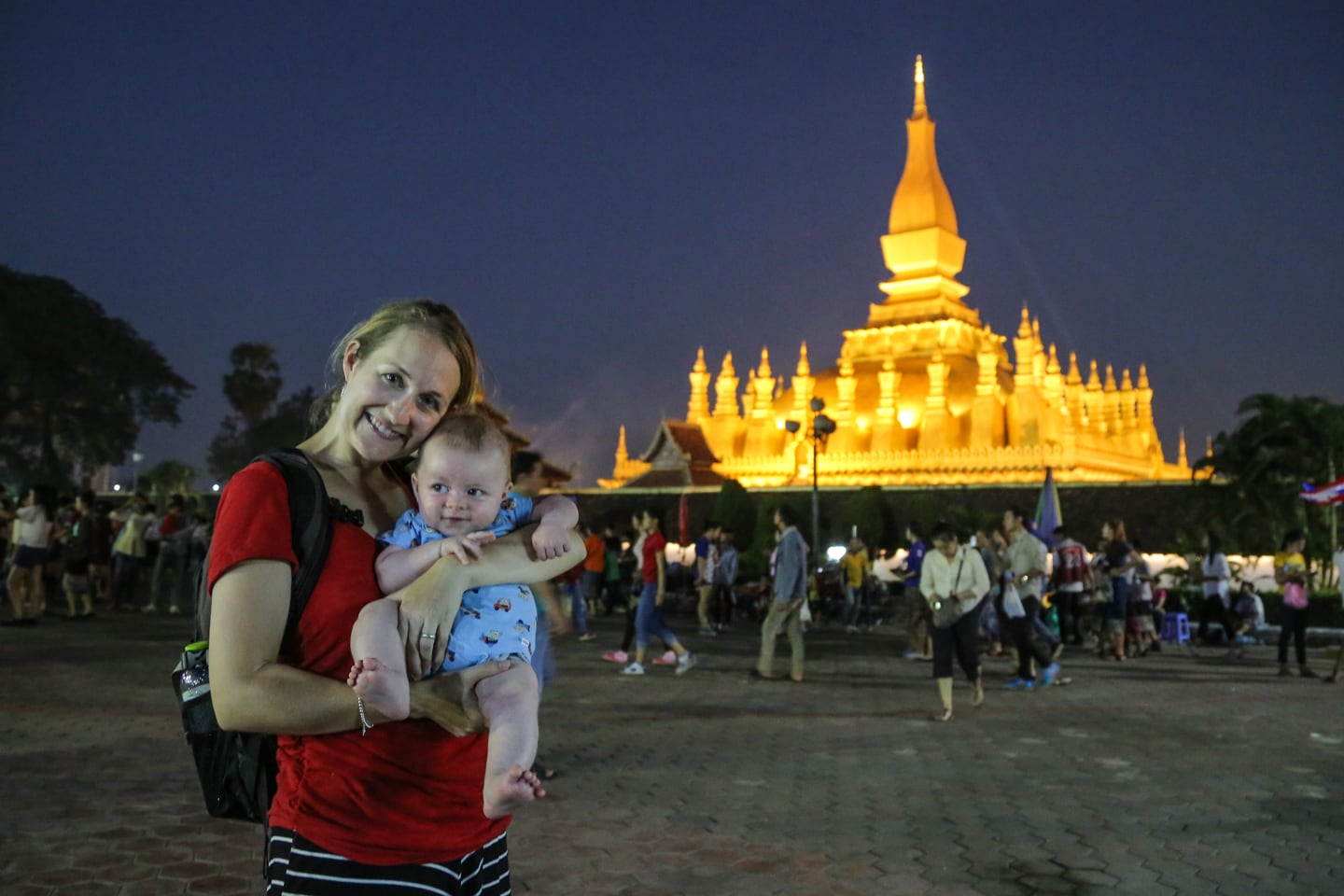 Where to Stay in Vientiane

Vientiane’s got a lot more hotel, guesthouse, and hostel options than you might think. If you aren’t familiar with the city, choosing the right place to stay can seem impossible.

Here are our top picks for places to stay in Vientiane — all highly-rated, centrally-located, and loaded with character and a sense of place, just like we like ’em. In short, we’d choose to stay in one of these places ourselves if we didn’t already live here.

Have You Been to That Luang Festival?

What was your experience?
Let us know in the comments below. 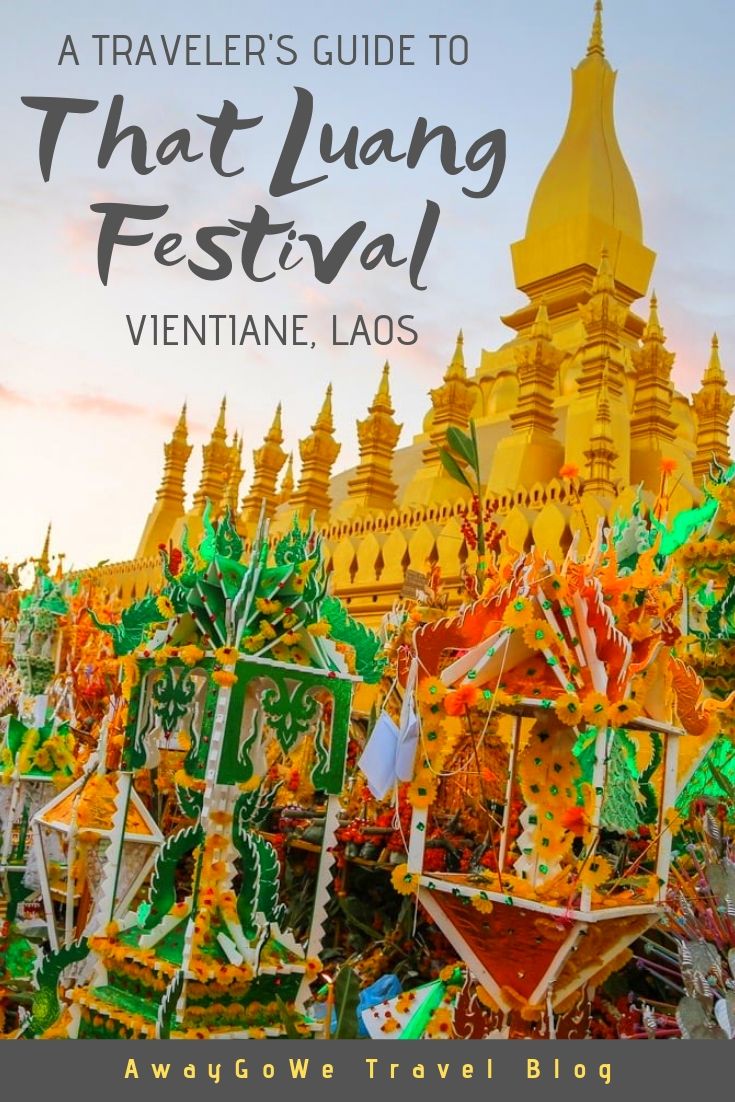 This is very helpful thanks

Glad to hear it!