Around Thakhek: Cave Hopping and Hiding from the Heat

We hit the road for a short day trip east of Thakhek to explore the caves along Road 12 — and grab some lunch at Green Climbers Home — before returning to the city and rejoining the Pi Mai festivities.

After a slow stroll around downtown Thakhek, we hopped in the pickup and headed east toward the mountains. I can’t think of too many places we’ve traveled where there is so much stunning topography in such a compact area. Our little road trip away from the city today will take us only ten miles out of the provincial capital, but we might as well be on another planet. The scenery makes us feel that way, at least.

Read our essential guide for motorbiking the amazing Thakhek Loop.
Tips on where to stay, where to rent, what to see and do, and updates on road conditions.

Our first stop is Nang Aen Cave, the farthest of the Thakhek cave cluster, and also the most popular. And it’s easy to see why — this cave has it all, and is made for tourists of all ages and abilities.

The Nang Aen recreation complex is reminiscent of other natural wonder sites we’ve visited throughout Laos. There are food and beverage huts, family picnicking areas, and of course, even a nature set for getting your picture taken.

Apparently, you can also take a boat ride through the cave, and we did see boats tied to various landings inside, but they were not running today. We think either the water might be too low this time of year (mid-April) or the boat guy took the day off for Pi Mai. Either seems reasonable in Laos.

The cave is quite developed throughout, with concrete stairways and catwalks, and colorful lights throughout.

In the U.S., I may have been bothered by all of this, but here where caves are a dime a dozen, it seems, sacrificing one cave to the gods of tourism doesn’t seem that big of deal.

It seems that the Lao government’s approach to tourism is try and funnel as many people into one or two attractions in a given area in an effort to keep the rest of it as wild and tourist-free as possible.

Due to the still relatively low levels of visitors Laos receives at its tourist sites, this is still quite possible. We’ll see how this approach pans out in another few years as more Laotians are able to afford to travel and more foreigners discover Laos.

Taking a moment at the altar near the entrance of the cave.

If you miss the 80s, I can tell you that they are alive and well inside Nang Aen! Now, where did I put those leg warmers…

The view from a lookout not far from the main entrance.

Nang Aen has two openings, with a small stream that flows through the cave. The far entrance is accessed by taking a boat 700m upstream, then walking an additional 300m to the rear mouth. Since the boats weren’t running, we did not make it to the rear entrance. But there’s still plenty to see in the front part of the cave. A handful of the cave boats are tied up in the bottom-left corner of the photo above.

During wetter times of the year, there is also a small waterfall inside the cave. 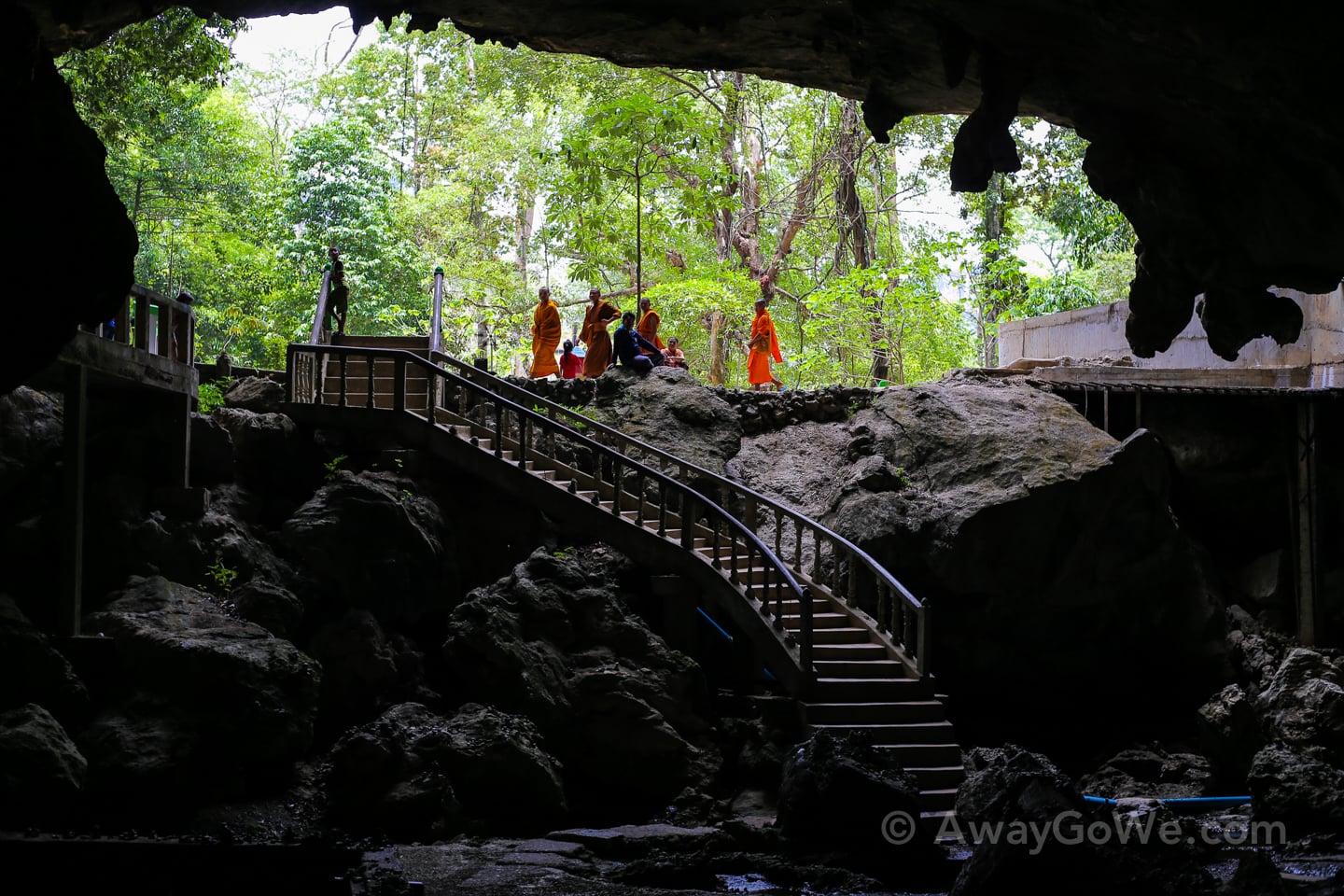 Just after the gap between two Karst cliffs on Road 12 (coming from Thakhek) there’s a dirt road leading off to the left to Sa Pha In Cave. It used to not be marked (but for a dilapidated brick arch) but now it is clearly marked with a sign visible from the road.

Not as popular as Pa Fa (Buddha) cave to the northwest, this Buddha cave is still worth visiting, if only for its serenity and lack of visitors. Even on this Pi Mai holiday, we had the cave to ourselves…well, with the exception of a handful of monks waiting to offer blessings to those who make the trip.

Unbeknown to me, Lori took this quick snap with her phone in the dimly lit cave after receiving my blessing and bracelet. Thanks, Lori, for getting my good side.

On our way out of the cave, the two elder women keeping watch over the entrance saw that Noe hadn’t yet received a bracelet and proceeded to remedy the situation.

Always a good sport, Noe took it in stride, though he was a bit startled by one of the women with bright red betel nut juice coming out of her toothless grin. But obviously, he wasn’t bothered that much, as you can clearly see. 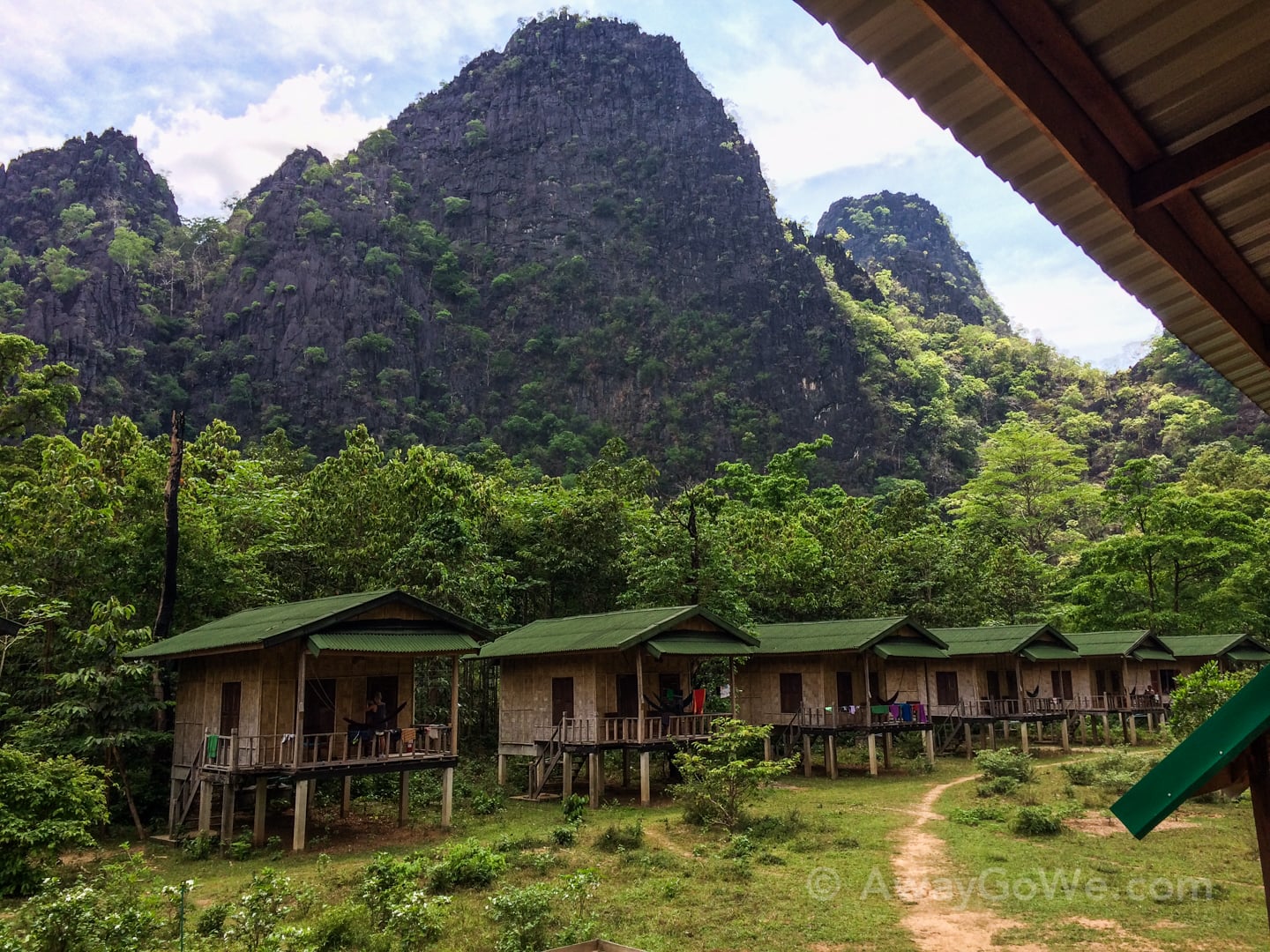 Green Climbers Home in the Jungle

Nearing lunch time, we decided to pay a visit to nearby Green Climbers Home, a funky and rustic hideout that hosts climbers (and everyone else) from around the world, because, well, there’s a ton of crazy stuff to climb around here, if you haven’t noticed from the photos so far.

We’d heard lots about this place and were looking forward to checking it out. Granted, we don’t climb ourselves, but have a fair amount of climber friends and generally like the vibe of the climbing culture, so thought it would be worth a visit. And…there just aren’t a lot of other options for grabbing food out here.

You may or may not have gathered by these pictures that it was hot. And by hot, I mean HOT. These folks (including Noe) aren’t just making a fashion statement here. If we had lingered much longer after lunch, Lori and I would have started shedding layers too — how many is anyone’s guess. Either way, we weren’t prepared to find out.

So yeah, we’re out in the jungle in a big wooden jungle hut at the hottest time of day, in one of the hottest areas of the country, on one of the hottest days of the year. Needless to say, there weren’t too many people out climbing at the moment. Everyone was pretty much hunkered down under the shade of the dining hut, eating, drinking, playing board games, napping, or just zoning out. There ain’t nothing wrong with that.

As you can see, Noe’s a big fan. Climber-in-the-making, perhaps? Or maybe he’s just fond of the vibe.

Now that things have cooled off a bit, we’re headed to Buddha Cave! This cave holds special significance to us because it was our first stop on our Laos Loop motorbiking trip in 2012, where we received a blessing and bracelet from a Buddhist elder in the cave. This time around, the elder’s got some company.

New this time around is this elevated walkway and sitting area below, which appears to fill with water in the rainy season. Four years ago, there was nothing but a marsh and a few wooden planks to help visitors access the cave. 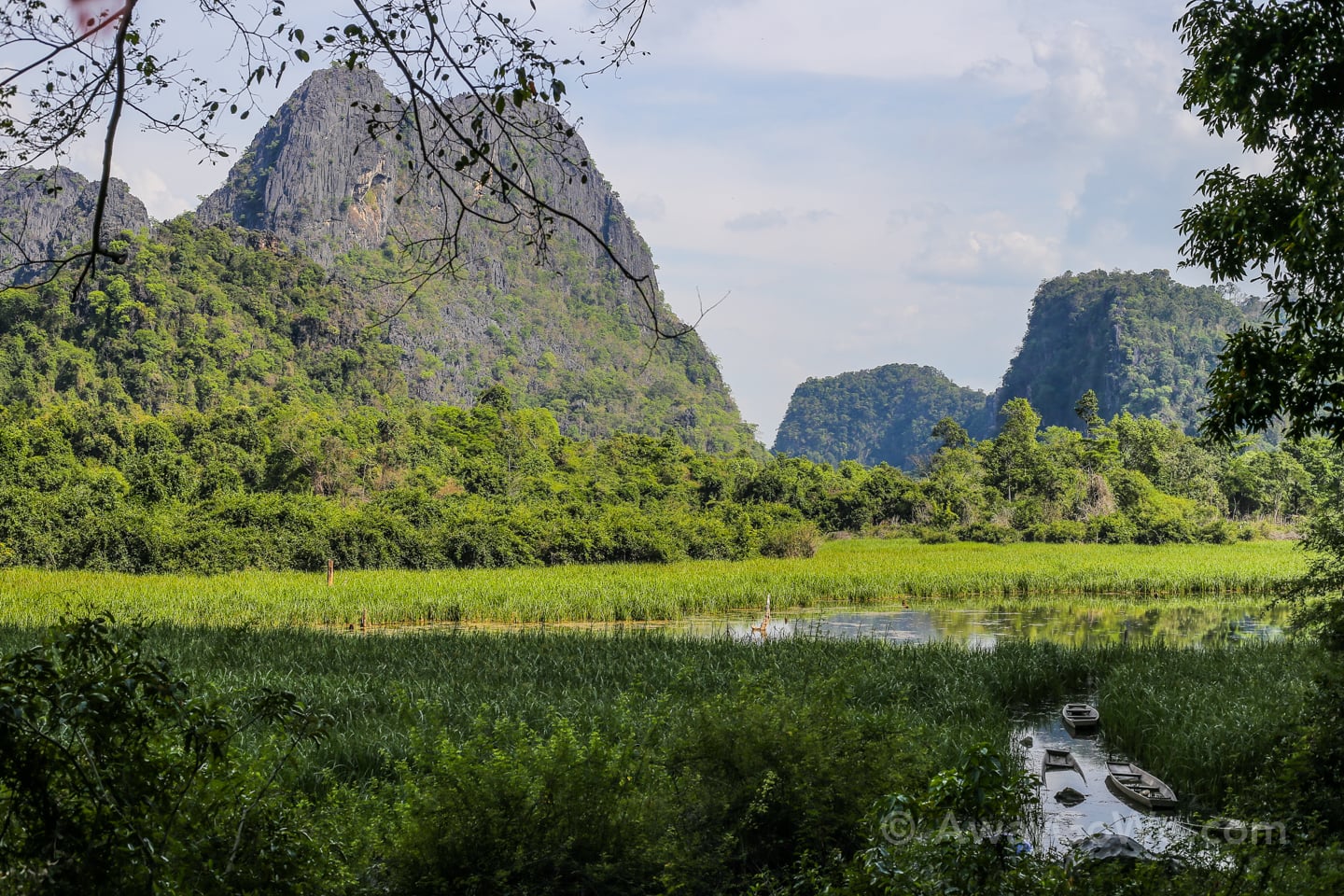 Apparently, you can also take boat rides here up the marsh and/or into a lower cave. The boats didn’t appear to be running. No surprise there.

No photos allowed in this cave, so we’ll leave you here and see you on the other side.

After shimmying through the small hole (above), the cave opens up into a large chamber, with steps leading down to the main altar where an elder awaits to impart a blessing and a bracelet, for which you are encouraged (but not obligated) to give a token donation in return, mostly for the bracelet and to keep things running. Both times now, this cave has not been staffed by monks, but by plainclothes elders. Behind the altar is where they keep all the Buddha statues. On our previous visit, we were able to walk in and take a look. This time around, the gate was closed.

Little Noe is quite a magnet in attracting friendly Laotians. Keep on exploring!

Yes he is! He makes lots of friends, and probably understands more of the Lao that they are speaking than we do…now if only he were old enough to be our translator 🙂

Thanks Gramps! Noe misses his grampy (and grammy) time. You know, you can probably recreate some of those “fresh smells” at home to go along with the photos if you really wanted to.