Our last day of motorbiking the Khammouane Loop in Laos was filled with dust, sweat, and a tear or two, marking the end of an incredible 112 mile journey.

I suppose in the whole scheme of things, our arrival at–and trip through–Konglor Cave might have served as a fitting end for the purposes of travel posts. Yet, they don’t call it “The Loop” for nothing. To leave the story there would have lessened the fact that this motorbike trip was an adventure with a very clear end goal — to reach Thakhek, the dusty old commercial town I watched disappear in my side mirrors four days prior. Afterall, we had to get the bike back to Mr. Ku (who was holding my passport) and we had to get our backpacks at Thakhek Travel Lodge.

Read our essential guide for riding the Thakhek Loop — Updated for 2019!

Tips on where to stay, where to rent, what to see and do, and updates on road conditions.

The fourth day is also significant because it was the longest riding day of the entire trip. We can’t easily say that things ended at Konglor, because our last day of riding was a marathon day — a hot, dusty and thoroughly exhausting one at that. The ride from Kong-Lo village back to Thakhek (via Nahin) was 112 miles (181km). To put that in perspective, the entire four day loop ride was just over 280 miles (450km). 112 miles may not sound like a lot, but it’s a heck of a lot to do in one day on a wimpy little 110cc plastic scooterbike.

Kong-Lo village is a pleasant enough place, albeit not a terribly exciting one. Tourists travel here for Konglor Cave, but those who stay do so to experience life in a small rural village seemingly untouched by big tourism or the outer world. They also come to experience the incredible beauty of Kong-Lo’s surroundings and the hospitality of its inhabitants.

The village is nestled in a bowl of stark karst rock formations. It’s a fertile little valley where residents engage largely in traditional livelihoods. The majority of Laotians live in rural areas and derive their livelihood from communal and subsistence agriculture — but this is slowly changing. Laos’ economy is accelerating rapidly which will undoubtedly bring changes. How quickly this will happen is anybody’s guess. 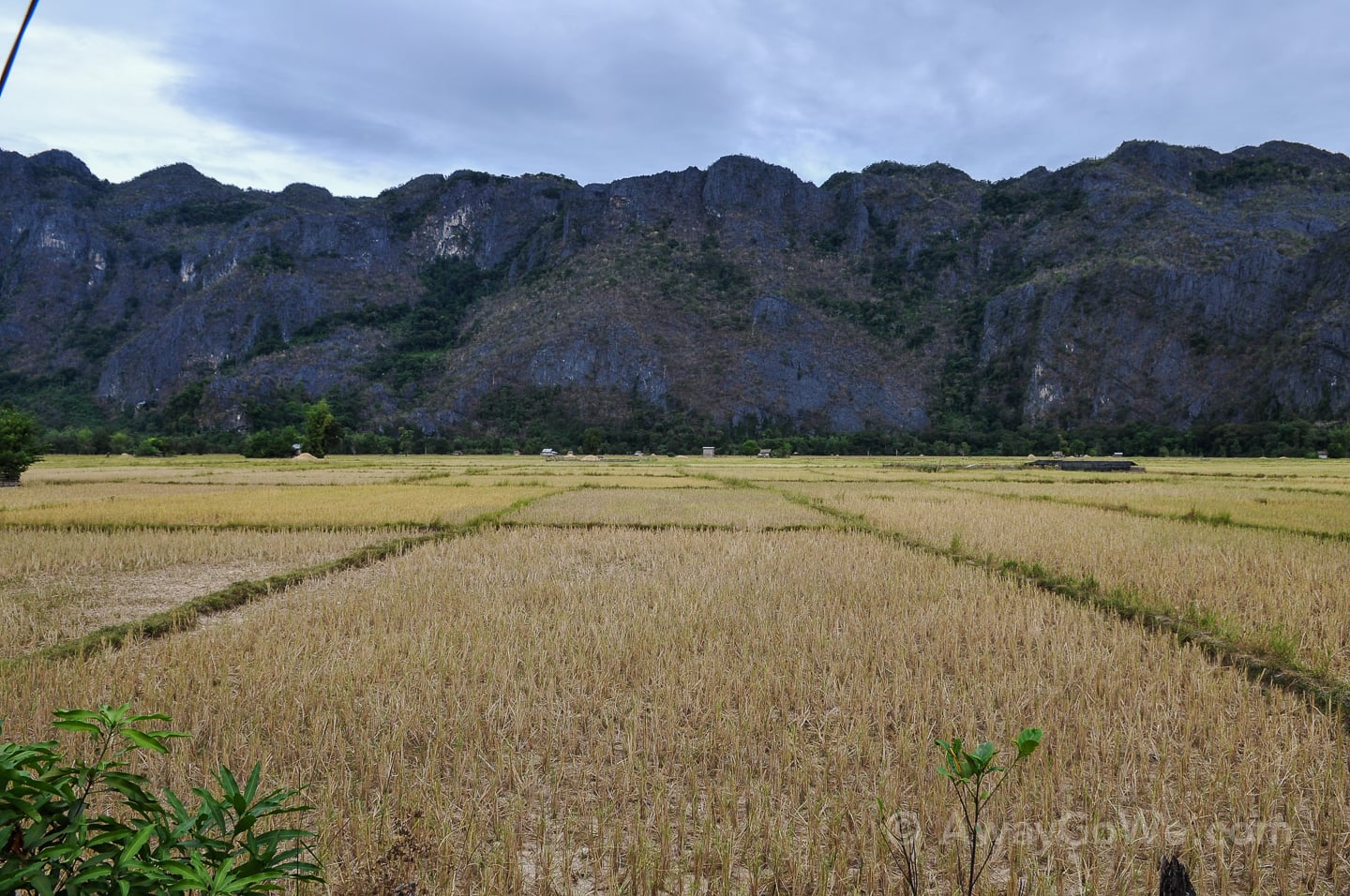 We stayed at the Saylom Yen Guesthouse on the north edge of town which seems to be a popular stop for many backpackers. It is simple yet clean, comfortable and very reasonable lodging (50,000 or $6 USD/night for a private room). If you stay there, try to get the room on the far right which has its own private rear balcony. There’s a restaurant attached to the complex that serves good local food and a few western favorites. Up the street in the middle of town is another good restaurant, but unfortunately we didn’t catch the name of it. It’s right off the highway on the right-hand side, you can’t miss it. 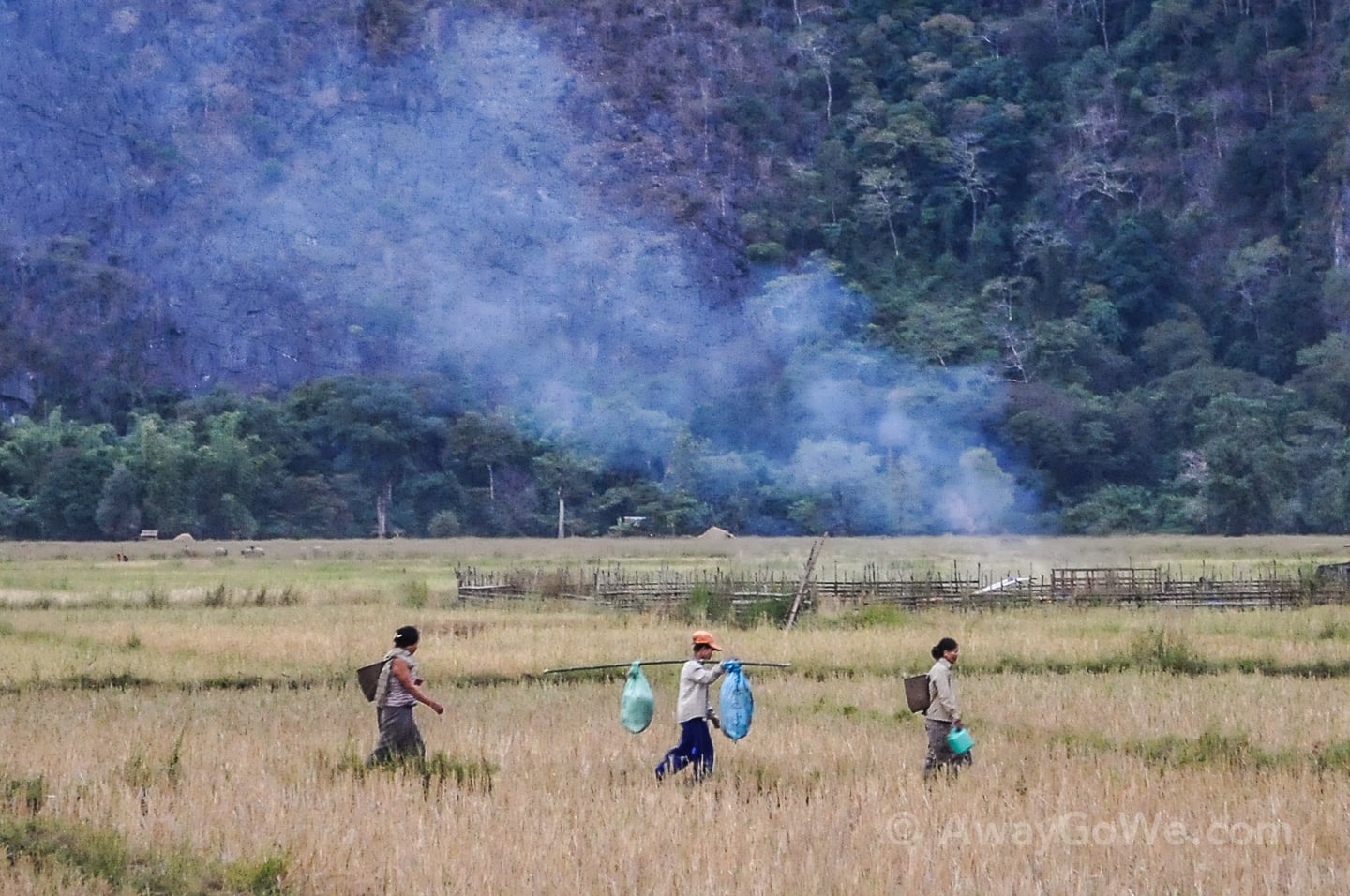 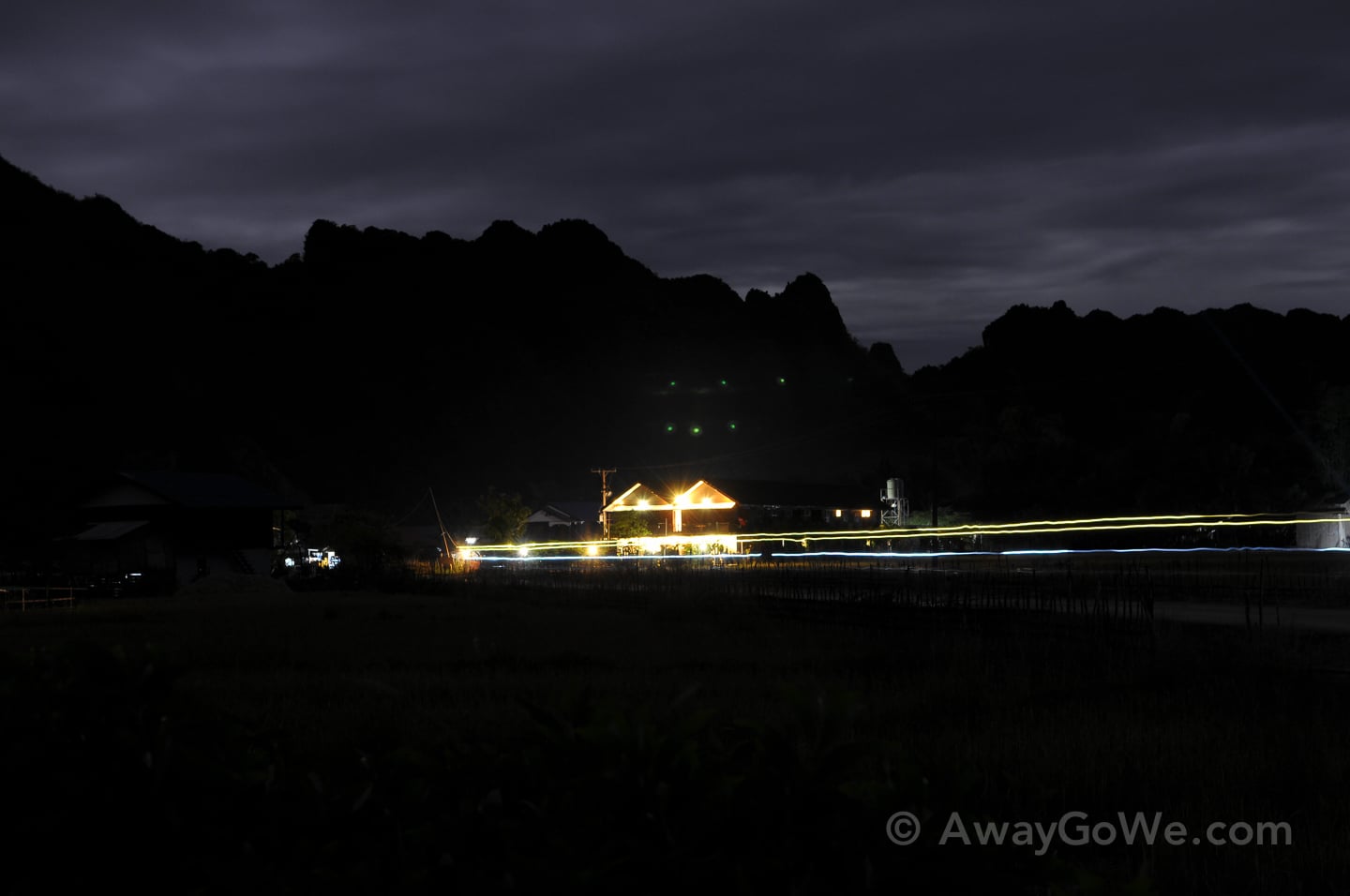 Back on the Road

Along Highway 8 between Ban Nahin and Vieng Kham there’s a can’t-miss viewpoint off a turnout and up a little dirt path (on the left-hand side of the road heading west).

While incredibly beautiful, this stretch of the journey is especially annoying due to a number of winding hill passes and large, exhaust-belching buses which are very difficult to pass on a tiny motorbike. Luckily, these turnouts exist which means that you can ride a little ways and break, then get back on the road and catch up with the bus, ride a bit more and break again. 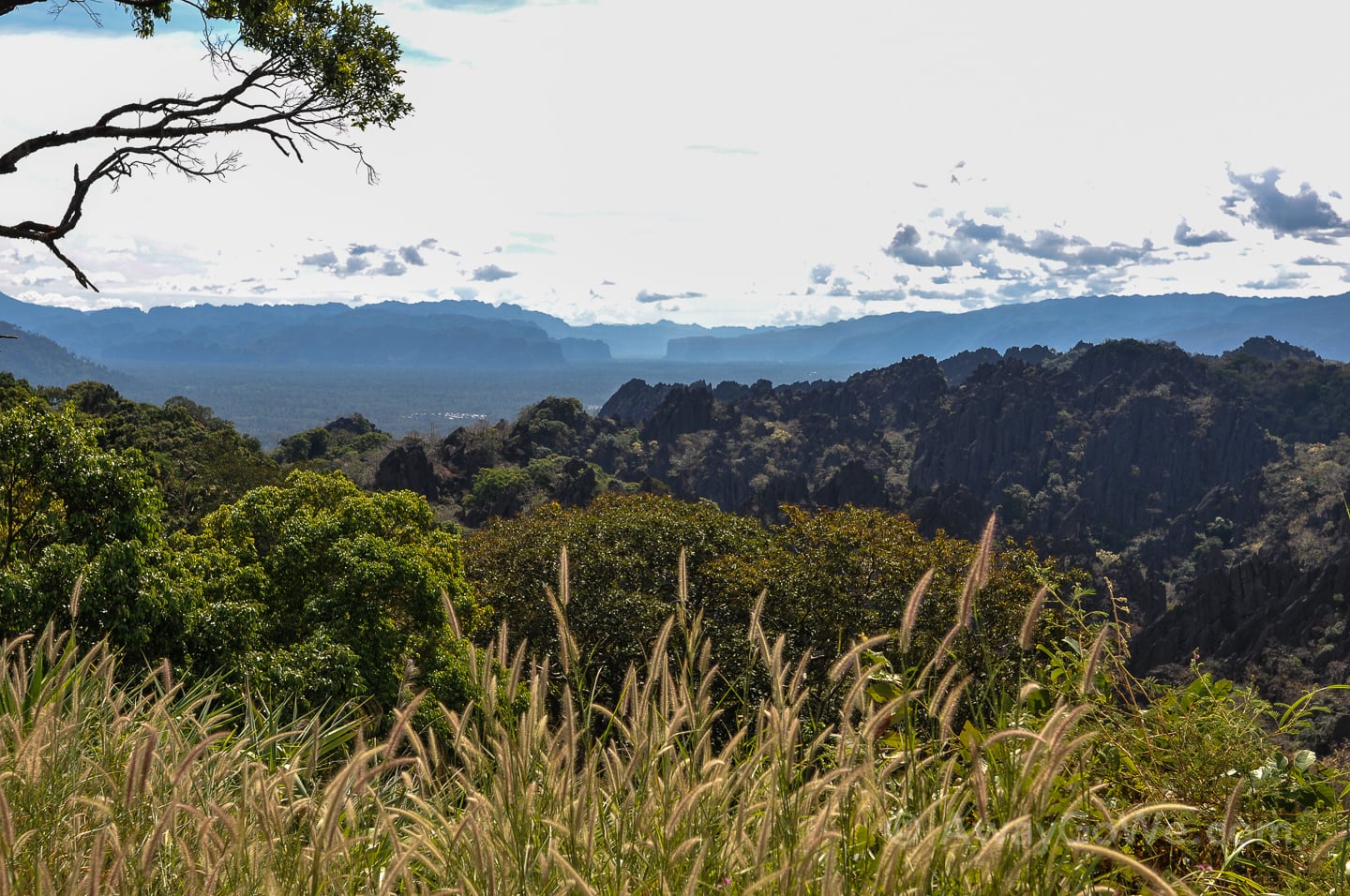 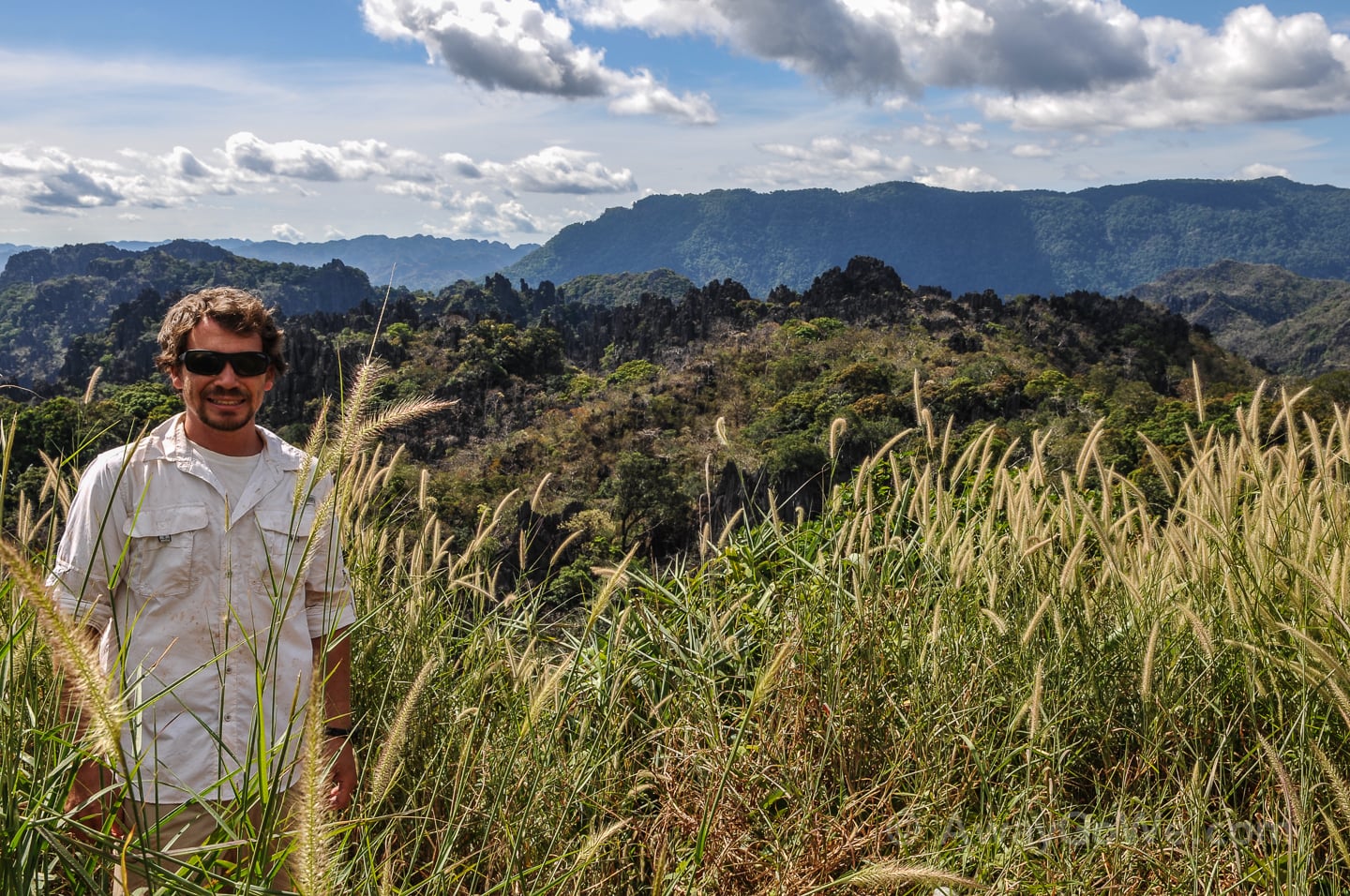 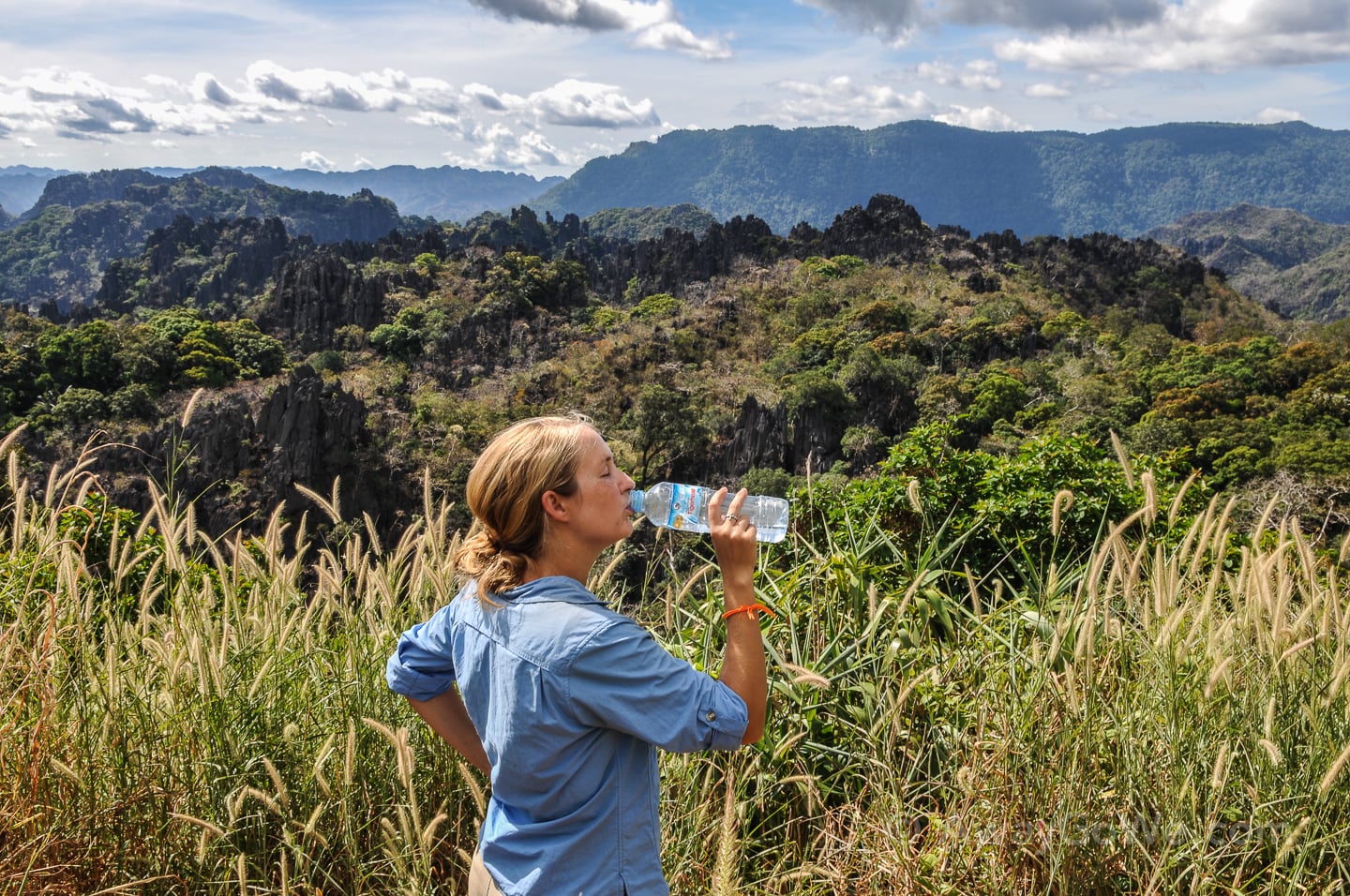 Once we hit the main road (Highway 13) it was smooth sailing on well-maintained level road. There’s a noticeable increase in traffic on this stretch, but still incredibly sparse as major highways go.

After a very long and dusty day of riding, we made it back to Thakhek in the early evening. Markers (as seen above) mark the number of kilometers from various towns along the highway. We had been watching in great anticipation the numbers on the markers counting down to Thakhek for the better part of the afternoon. When we finally came upon the final marker it was met with excitement, relief and a small measure of sadness in the notion that the journey was over.

Before returning the bike, we had ourselves one more adventure. We needed to withdraw money from an ATM to pay for the bike and the next night of lodging. We went directly to the one ATM we had used before at the bus station along the highway. The ATM, however, was out of order. This put quite a kink in our plans given that I was thoroughly exhausted and just wanted to get rid of the bike by that point. The non-functioning ATM at this location meant that we would have to brave the afternoon traffic and head deeper into town than originally expected. There was far more traffic zooming around Thakhek than I had seen the entire day on the road, but we knew we had to get it done. We were directed to the other end of town but that ATM didn’t work either. Then we were directed to another part of town to another non-functioning ATM. However, there was a lady behind a window who was able to do the withdrawal manually. With money in hand, we returned triumphantly to Mr. Ku and Thakhek Travel Lodge, ditched the bike and two helmets and paid with little fanfare from Mr. Ku, gathered my passport and checked in to our room.

We celebrated with a nice “western” dinner and a couple of beers. While at dinner, we met up with two of the travelers we had run into on the Loop and were happy to see they returned without incident as well. They were both characters and we loved swapping stories with them. Two of my favorite things about traveling are accomplishing something you weren’t sure was possible and meeting up with folks you’ve shared some part of the adventure with. This evening was one of those few times we got to enjoy a combination of the two.

In the morning, we would gather our filthy mud covered clothes and the rest of our belongings and catch a bus south to Pakse where we’d find a quirky little city and an unexpected festival awaiting us.