It’s no secret that Portland is full of great hikes, both in and around the city. While we’ve racked up a fair amount of Portland trail mileage over the past 18 months, there’s no doubt […]

It’s no secret that Portland is full of great hikes, both in and around the city. While we’ve racked up a fair amount of Portland trail mileage over the past 18 months, there’s no doubt in my mind which urban hike tops our list: Goose Hollow to Balch Gulch via Pittock Mansion and Nob Hill. 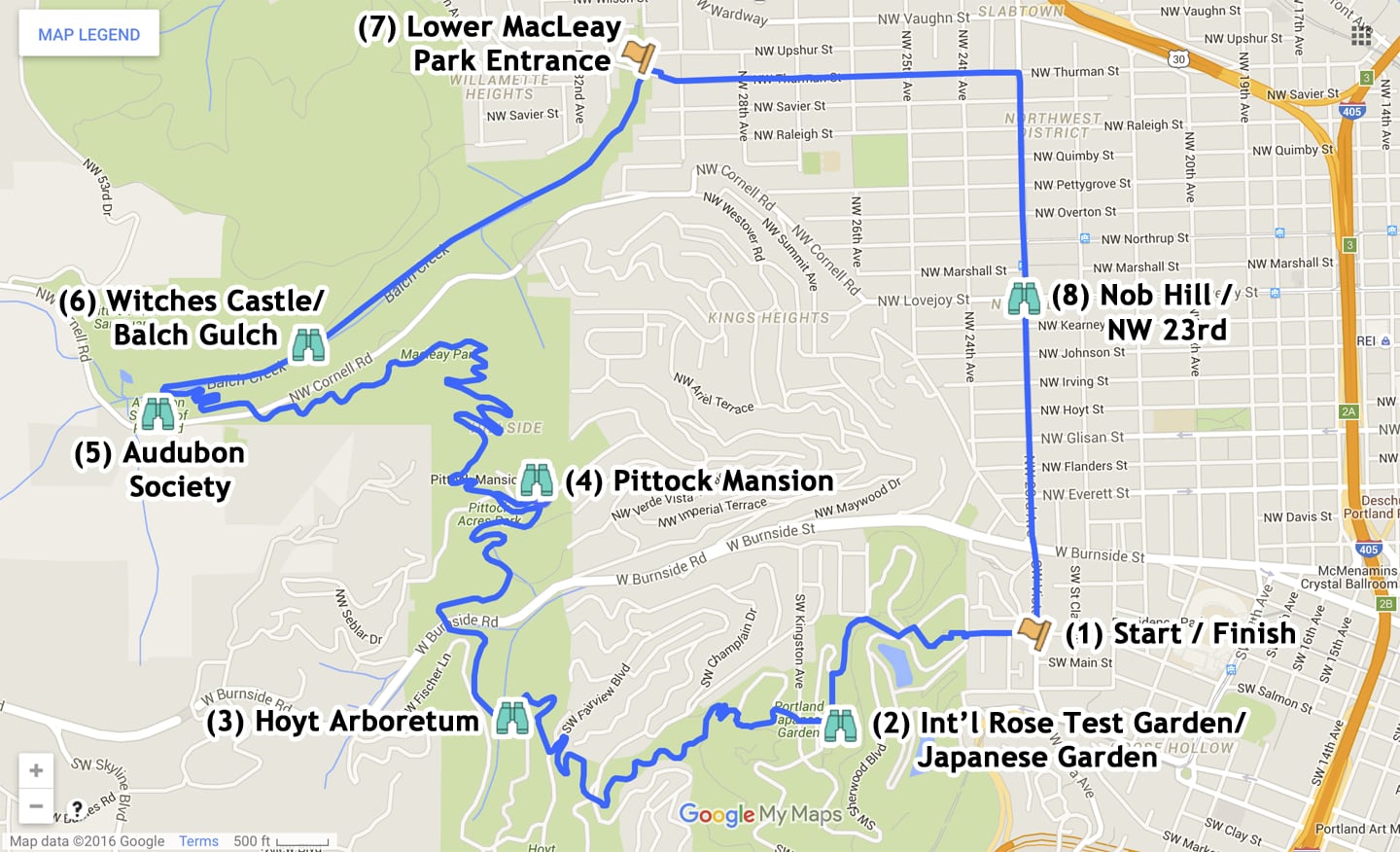 Though the loop is actually a lot of separate trails rolled into one, this route consists mainly of following the Wildwood Trail from the Japanese Garden to the “Witches Castle” on Balch Creek, then following Lower Macleay trail back into town.

For us, this all came about when a friend was in town and we decided to explore Balch Gulch. We could have driven down NW 23rd and parked at the Lower Macleay Park entrance at the end of NW Upshur, but that wouldn’t have been any fun. Instead, we decided to try and figure out our way there via area trails. Our efforts produced an eight mile loop beginning and ending at our apartment that we’ve since repeated several times.

Lori and I don’t like to do a lot of things multiple times — too much to do and see in the world — but we occasionally make exceptions. This particular hike is both unique and very convenient to us — I absolutely love the fact that I don’t even have to drive to the trailhead — we live on it!

Since April 2015, I’ve done this hike more than half a dozen times, alone and with Lori, rain and shine. We’ve taken a total of six guests with us at various times — pretty much anyone who we think won’t mind a little eight-mile, three-hour jaunt around the neighborhood. Mile for mile, I’d say that this loop packs the most punch of any urban hike I’ve ever done.

This post combines photos from some of the 2015 and 2016 hikes we’ve done along this route. 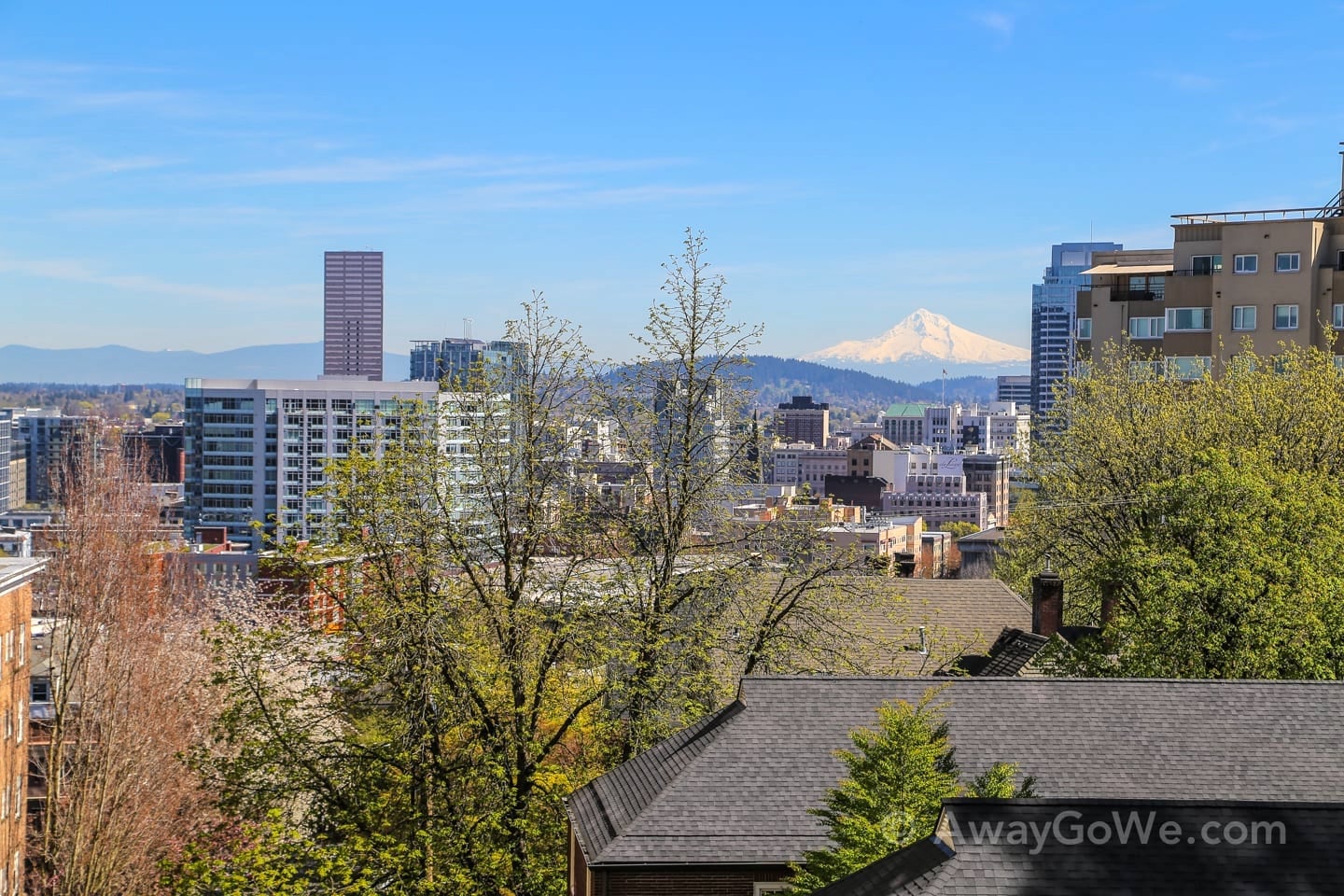 As mentioned, we typically start this hike from our apartment in Goose Hollow, but it can easily be accessed at dozens of points and parking areas along the loop. Normally, we like to do the hike in a clockwise direction, saving the long, level slog down NW 23rd Street for last. Most recently, however, we decided to do a car shuttle with a friend, which cut two miles off the hike (the urban NW Thurman/23rd part), and ended up doing the hike in reverse. This post will cover the usual (clockwise) way I like to go.

Our first stop is Washington Park, about a five minute walk uphill from where we are currently living. Right off the bat, we’ve already climbed enough to enjoy a great view at the top of the park’s stairs.

A short walk farther up into Washington Park, we arrive at the outdoor amphitheater. 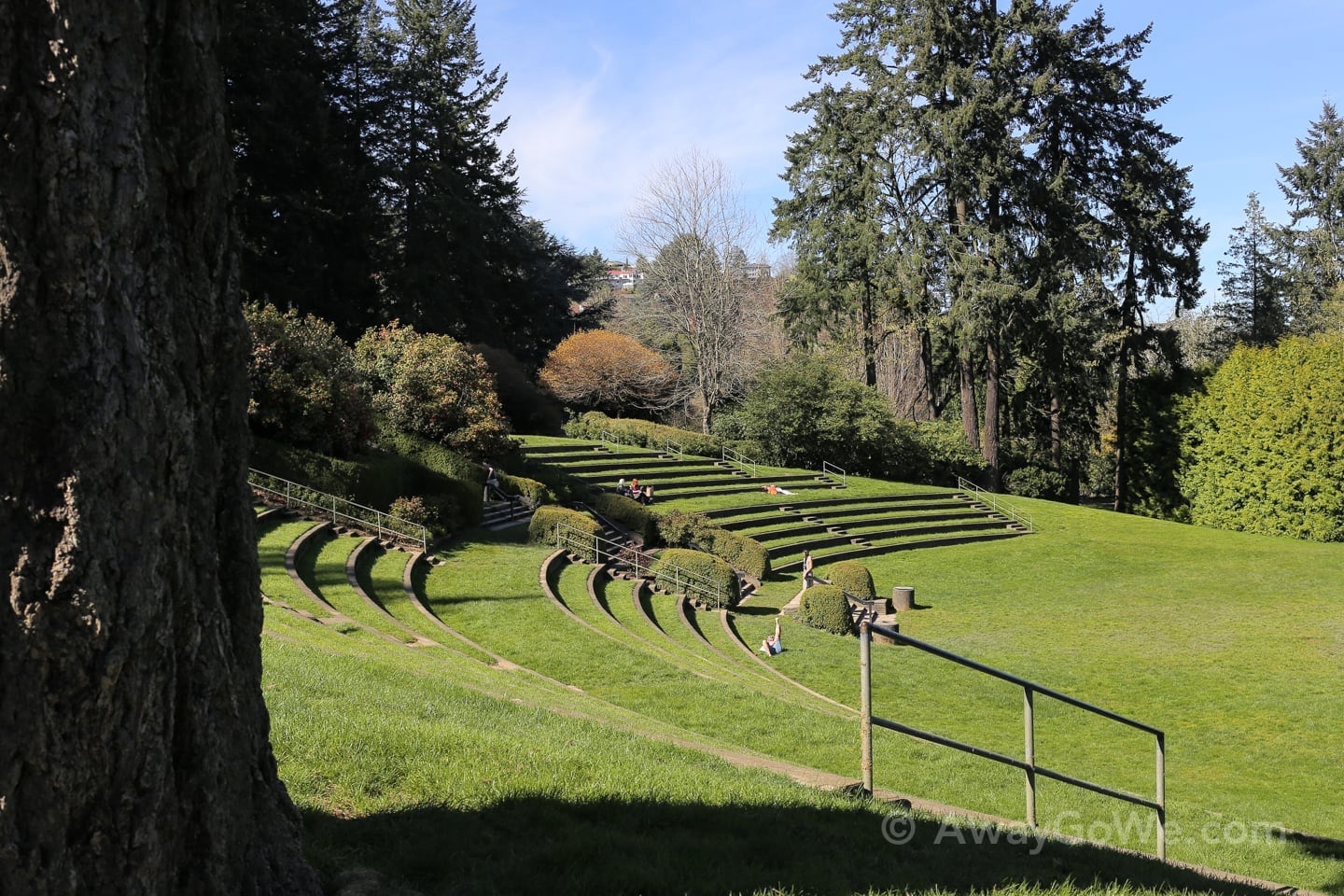 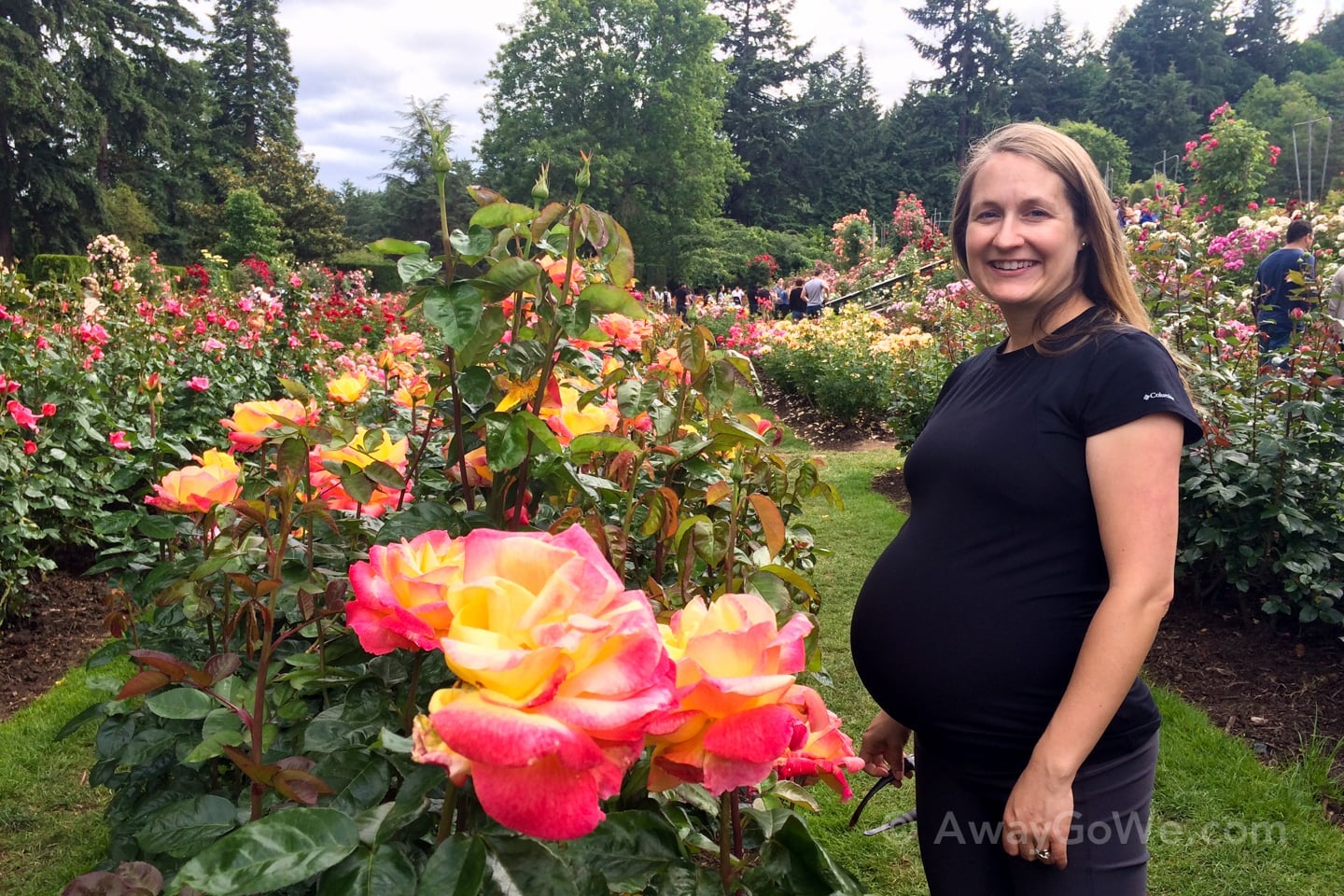 Adjacent to the amphitheater is one of Portland’s most beloved outdoor spaces: The International Rose Test Garden. These pics were snapped from a recent trip (as you may have been able to figure out judging by the size of that belly!).

It’s late May and the roses are in full bloom. Evidently, the crowds are too! — a sign that the Portland Rose Festival, and summer, are just around the corner. 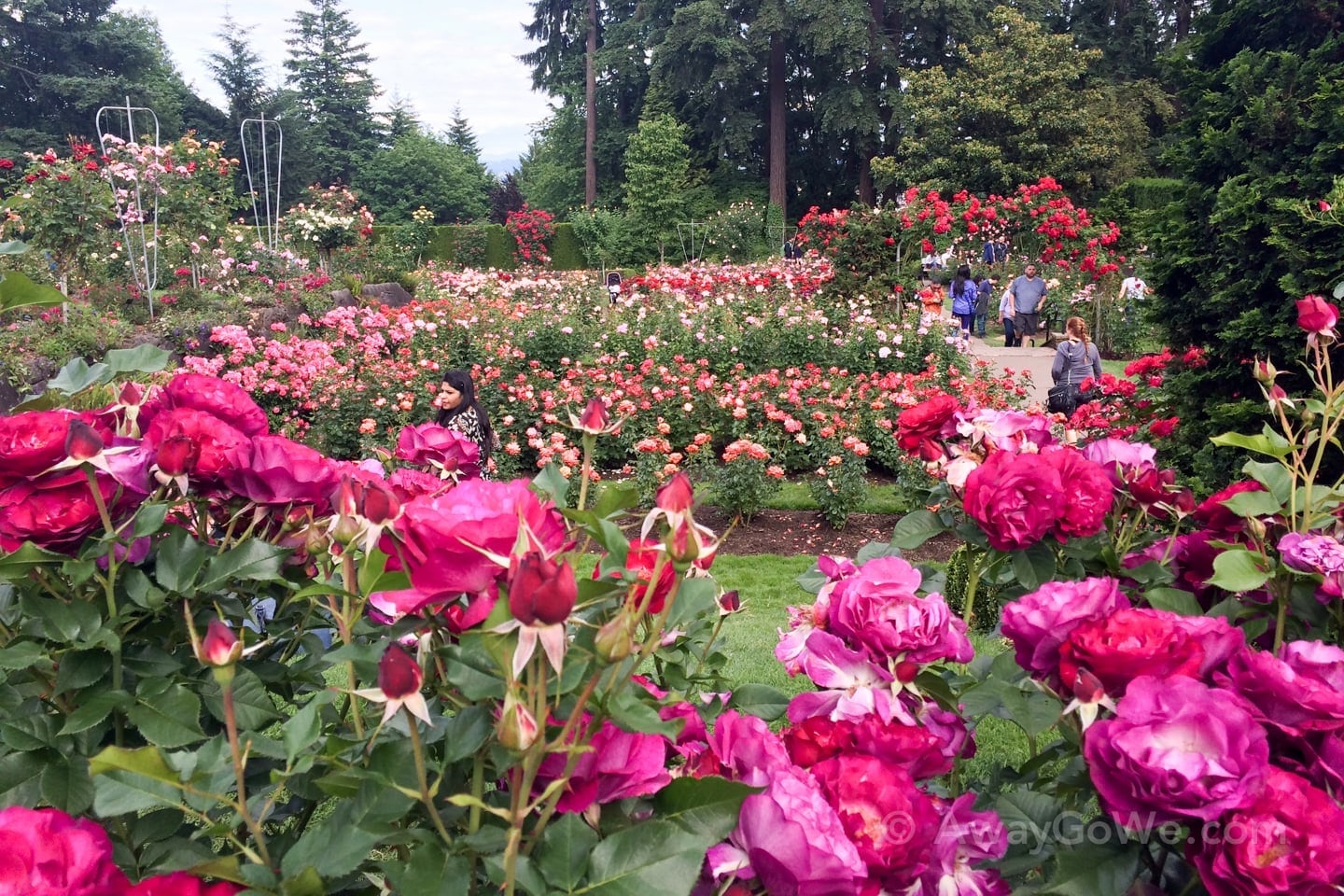 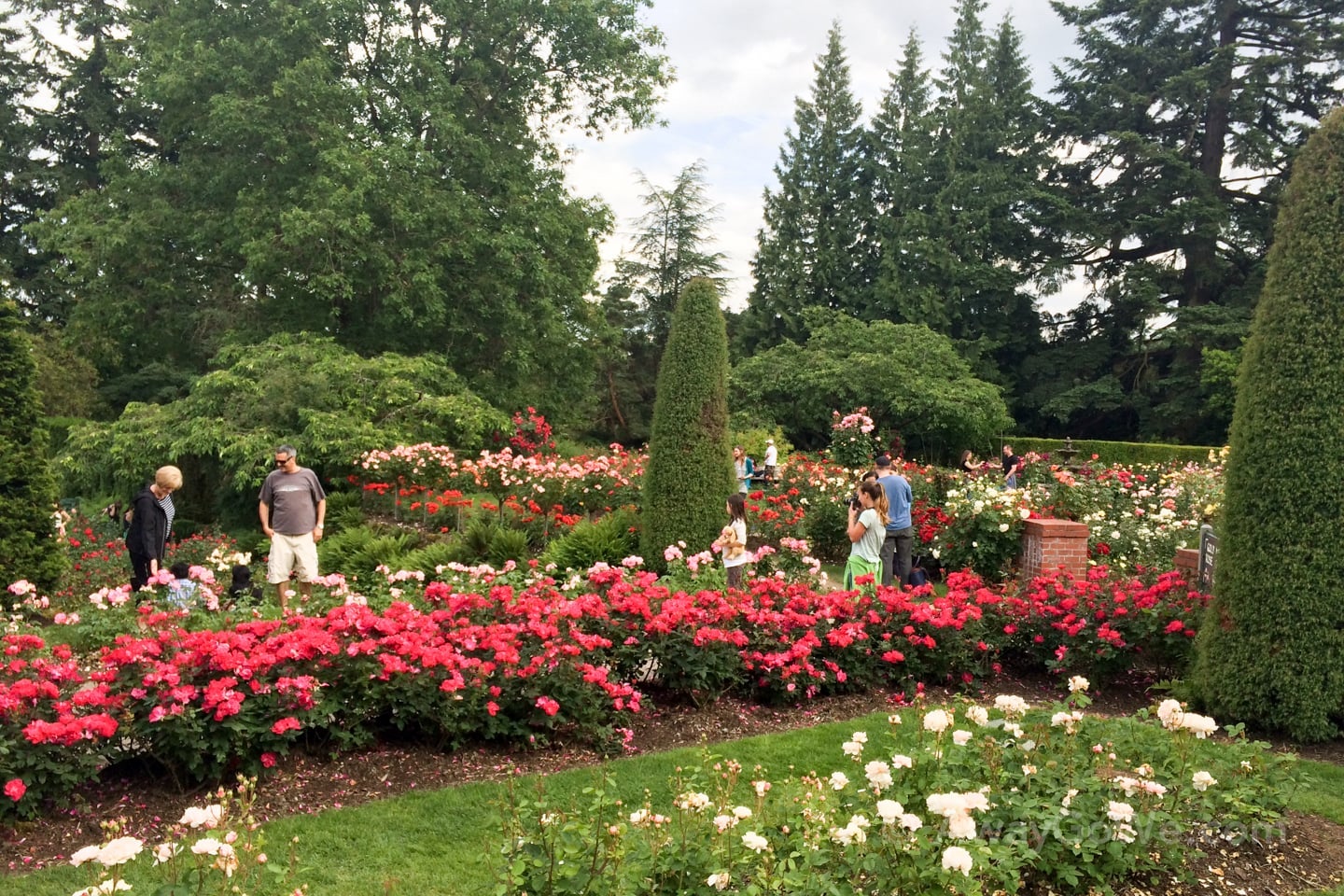 On an unseasonably warm March day during a solo hike, I was forced to take a detour around the Japanese Garden due to their big expansion project. Following the same route a couple weeks ago, it became apparent that the detour will likely be in place for a very long time. 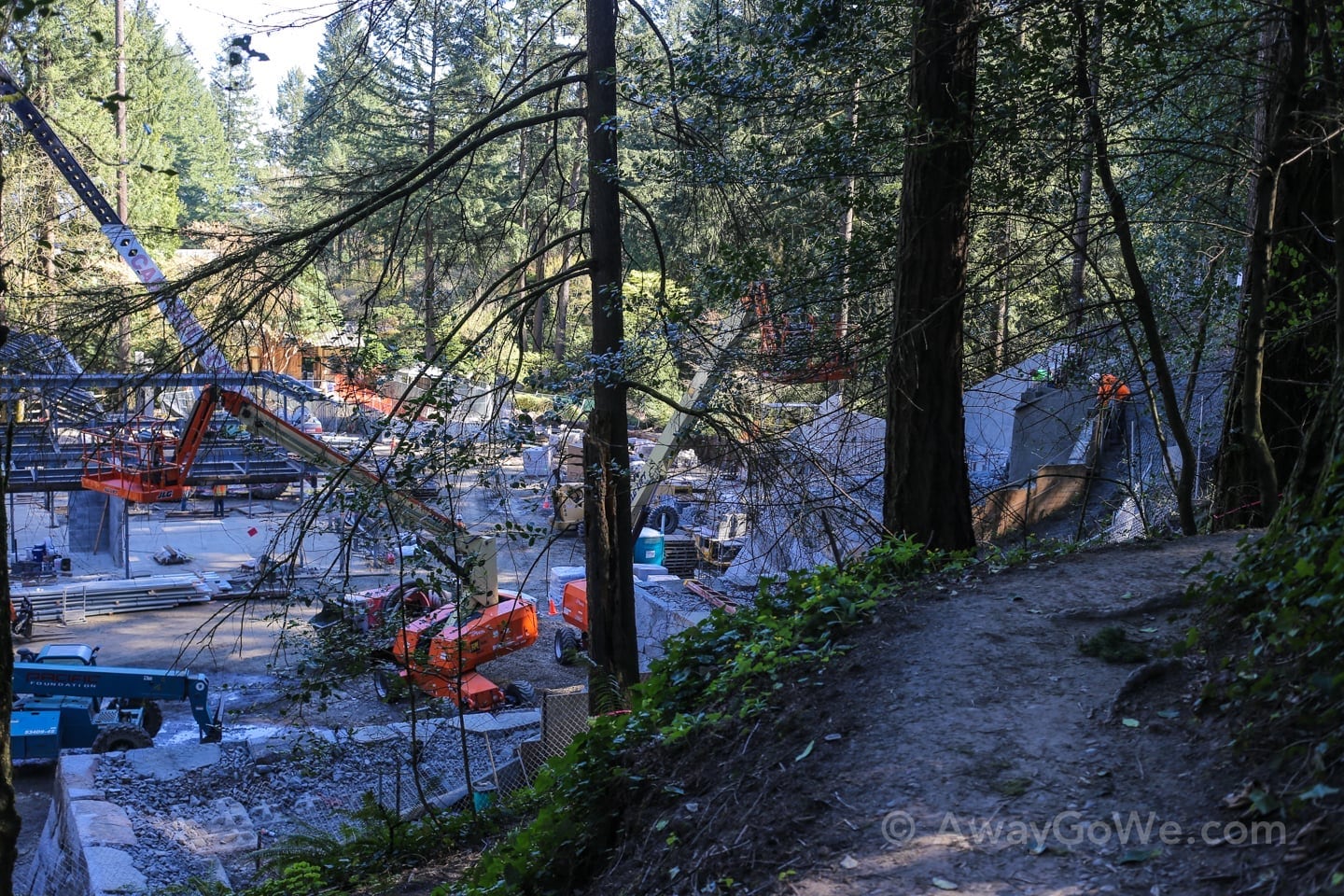 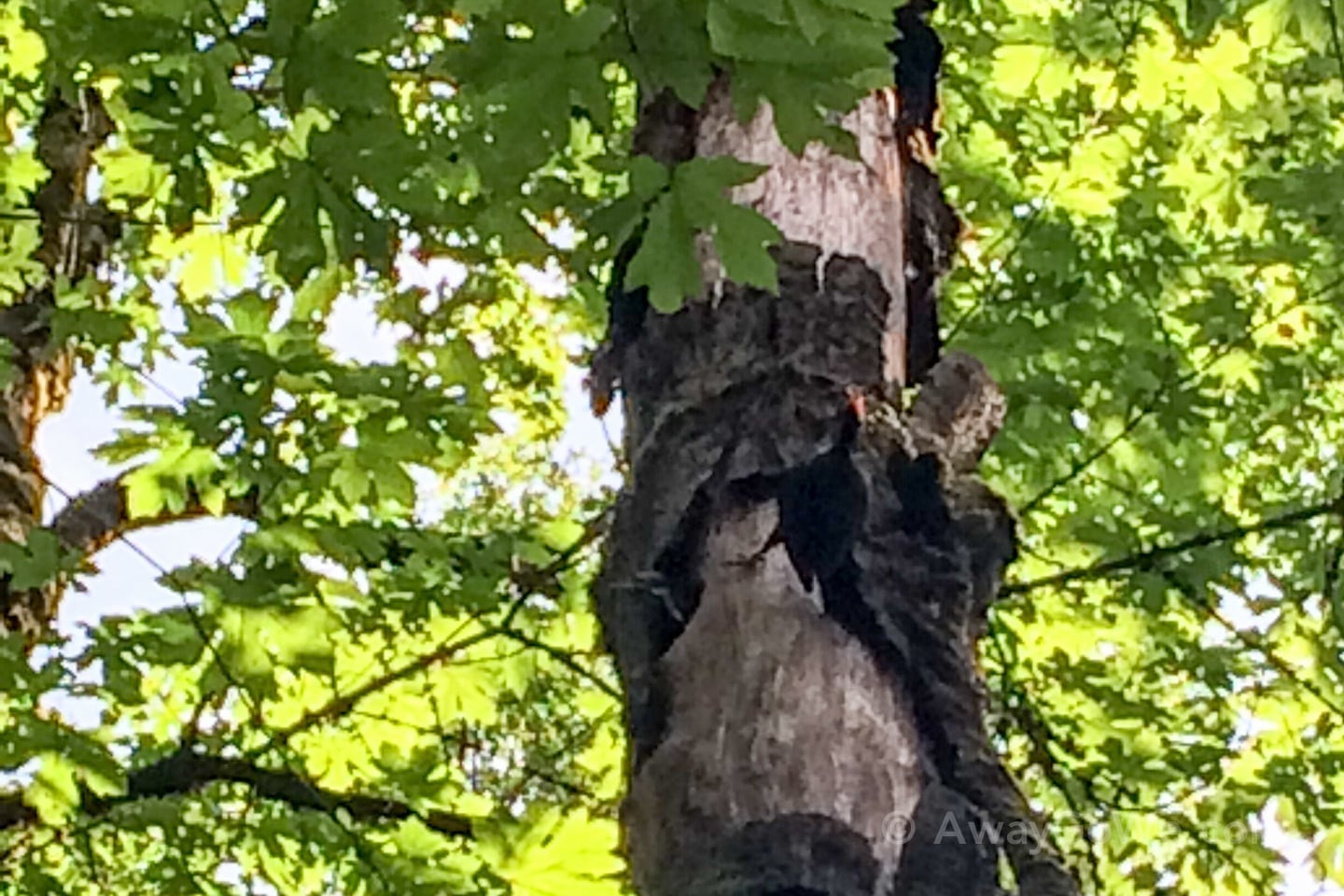 On our most recent time hiking the route, we heard a strange noise and looked up. It sounded like squirrels barking but were in fact baby woodpeckers (woodpecker chicks?) being fed by their parental unit (see above).

We frequently come across wildlife in this section of the route, which cuts right through the Hoyt Arboretum. The arboretum is worth exploring on its own merit, which we’ve also managed to do a few times.

After crossing the arboretum, the trail dips down to cross NW Burnside Street, which can be a challenging feat given the volume of traffic during morning and evening commute hours. Frequently viewed as a bastion of pedestrian-friendliness, I have a whole list of complaints regarding walking in Portland that, quite frankly, I’ve never had in any other major city I’ve lived in — a multitude of unsafe pedestrian crossings is a frequent complaint of mine, and the Wildwood Trail crossing at NW Burnside St. tops the list.

The Wildwood Trail is one of the most frequently used trails in northwest portland and the entire city, and to not have safe and easily manageable accommodation for pedestrians (this crossing is particularly dangerous with cars traveling at high speeds and set on a blind curve) is unforgivable. It’s criminal for the city to maintain and endorse the use of such a highly-utilized route for hikers and trail runners without offering a reasonable and safe way to cross the busy thoroughfare and continue following the same trail. In numerous other major cities, a pedestrian bridge/underpass or traffic light would have been constructed long ago. Heck, I’d even settle for some painted crosswalk lines and a blinking light. 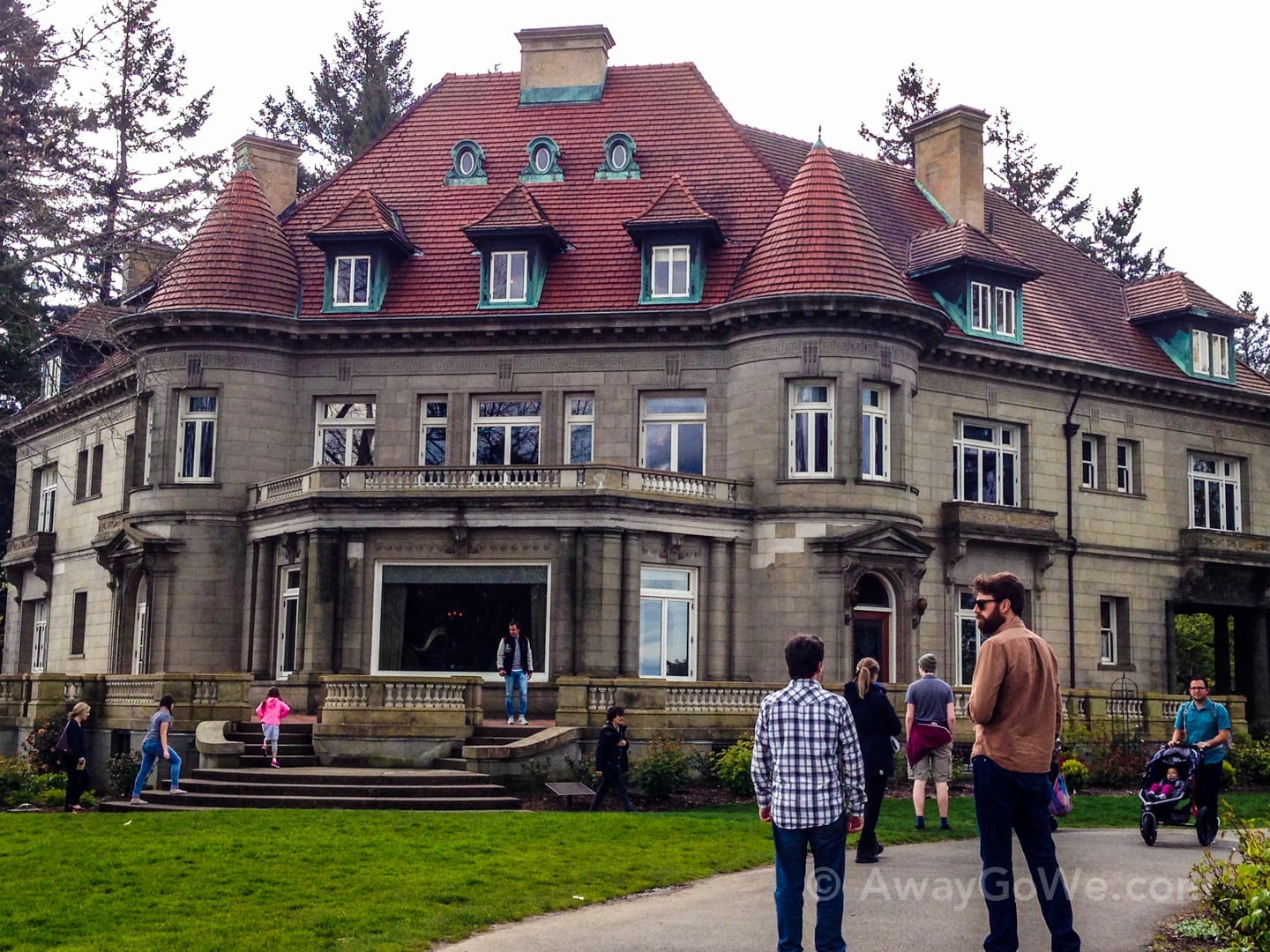 Built in 1909 by the late 19th century owner of the Oregonian newspaper, Henry Pittock, the Pittock Mansion is like no other building in town, owing to its unique architectural styling, immensity, and most importantly for us, its AMAZING VIEW! 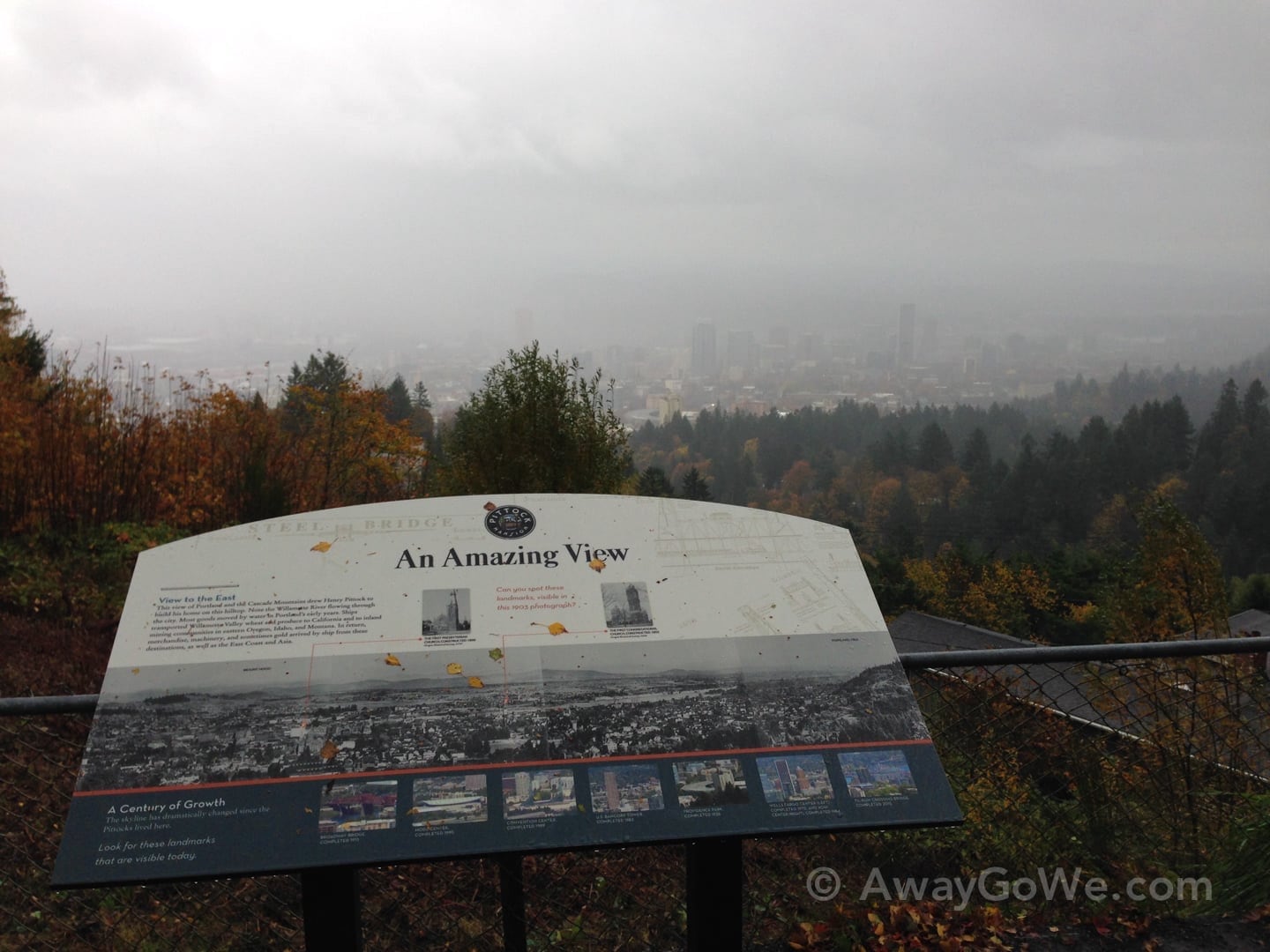 Amazing! Lori snapped this on a particularly wet and gloomy day, which also happened to be Halloween.

Six months later, it was a totally different story: 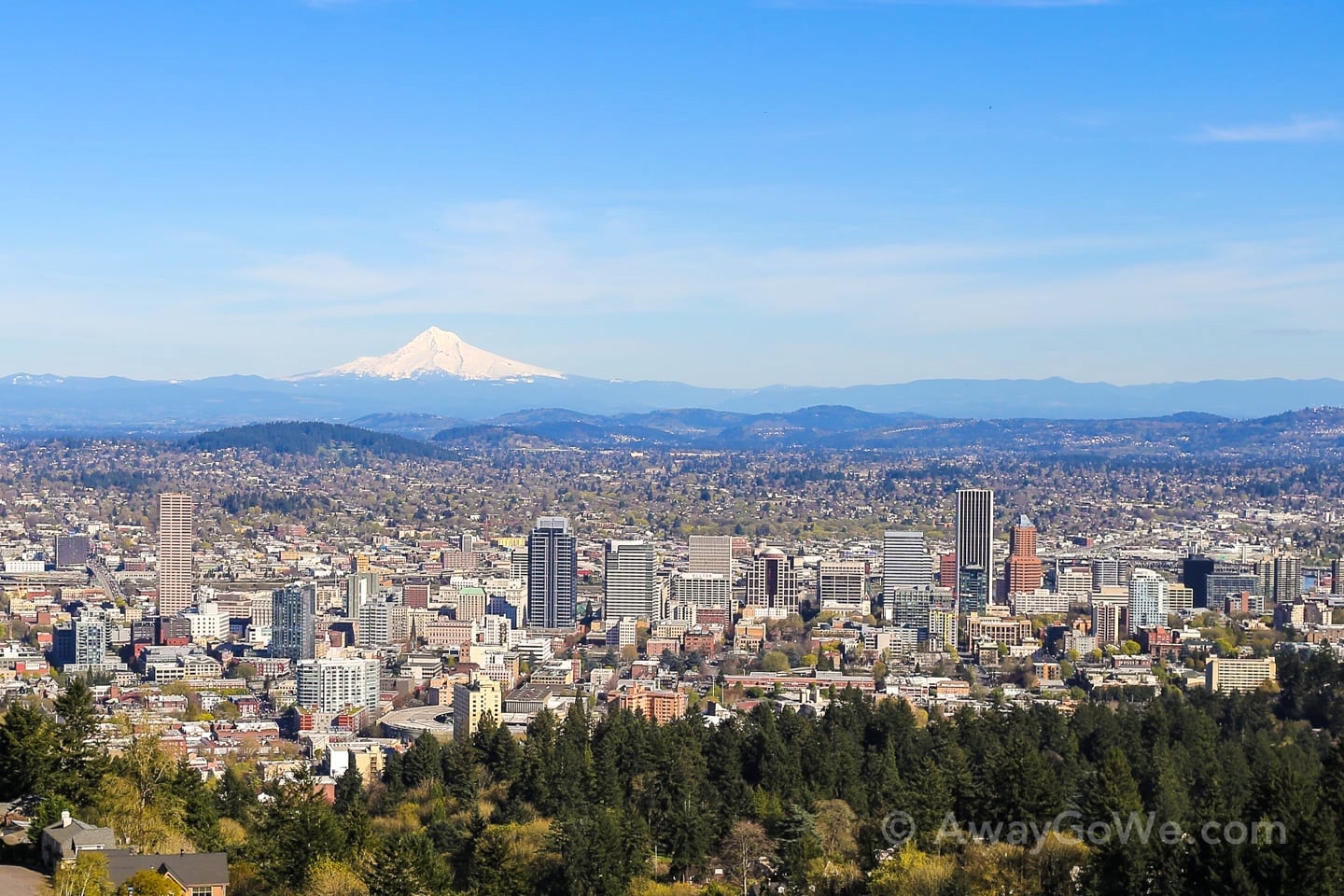 I took the above photo in March.

Then, in late May: 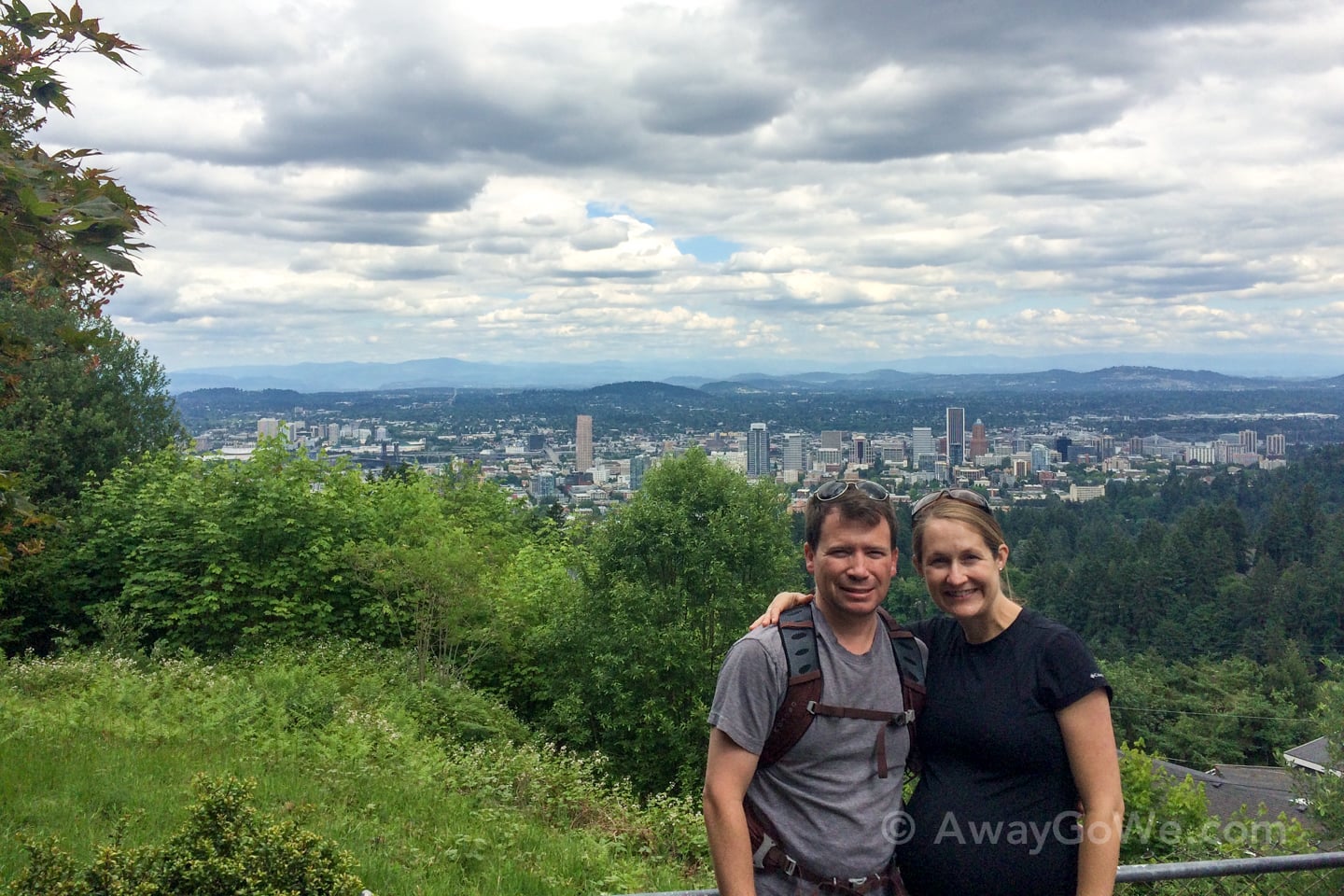 Such is life in the PacNW. 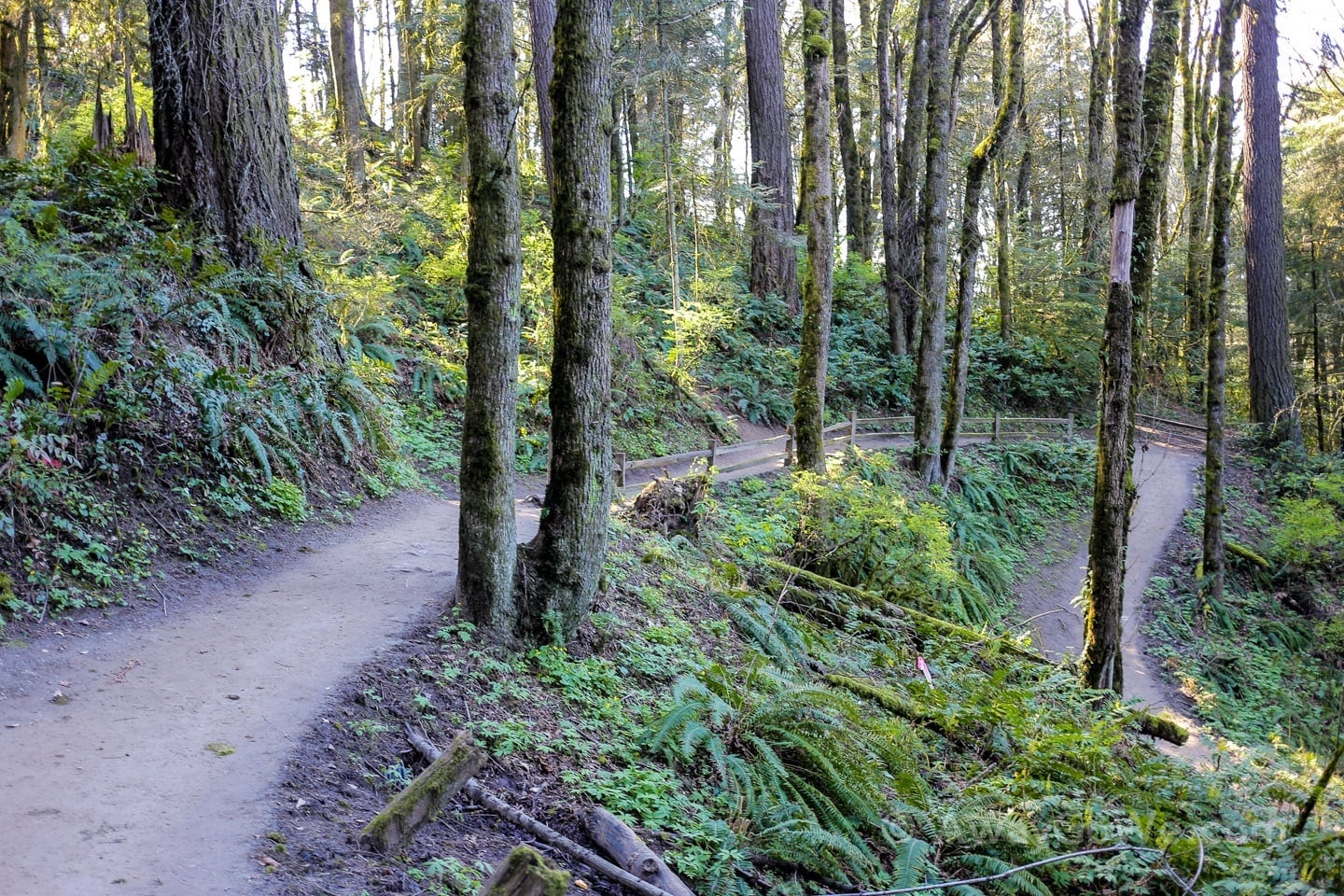 From Pittock Mansion, the Wildwood Trail zigzags through the lush and wondrous mossiness of Forest Park. 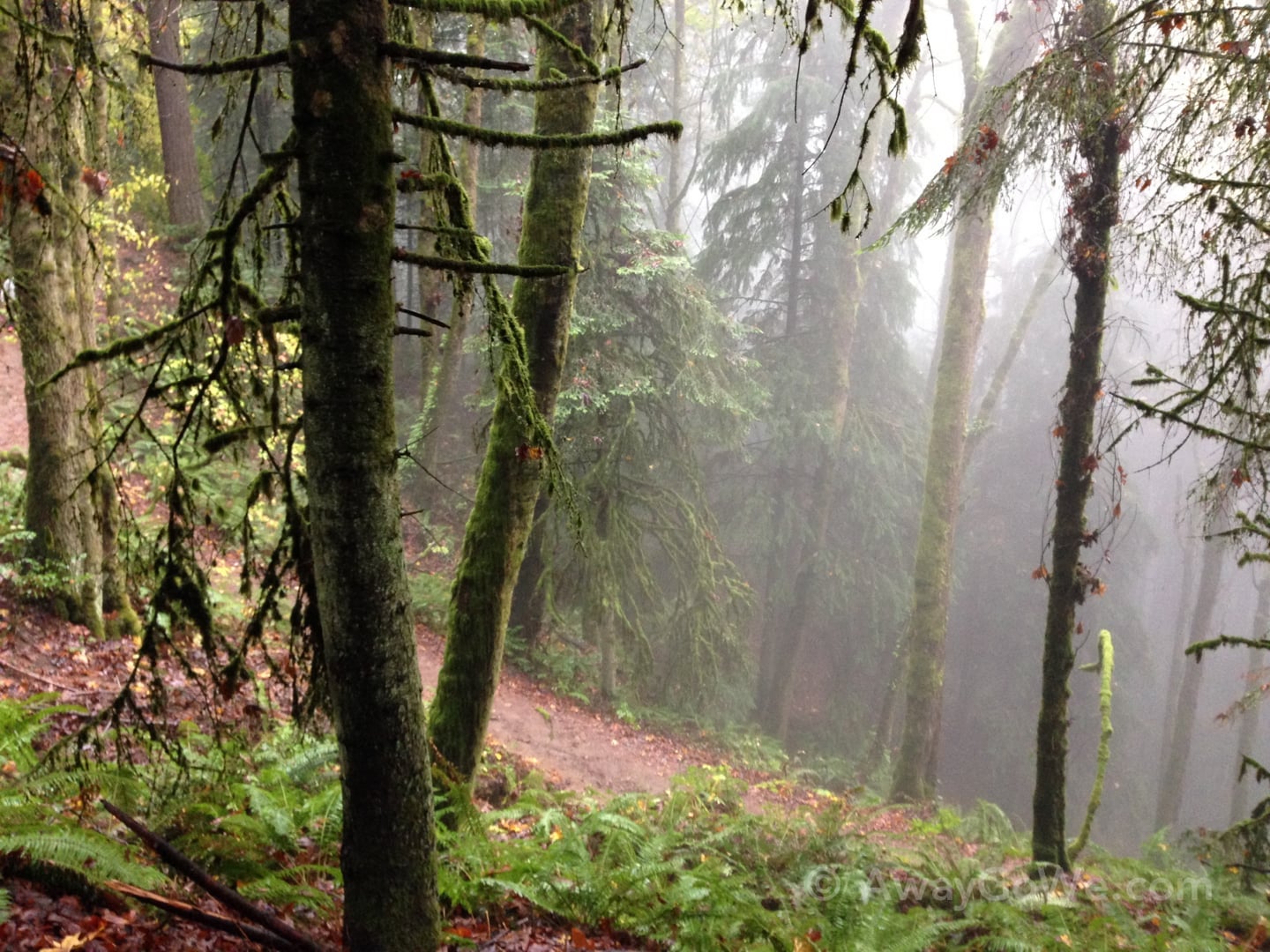 Immediately after crossing Cornell Road, you’ll find yourself at the Audubon Society of Portland complex — again, totally a place worth visiting in itself. 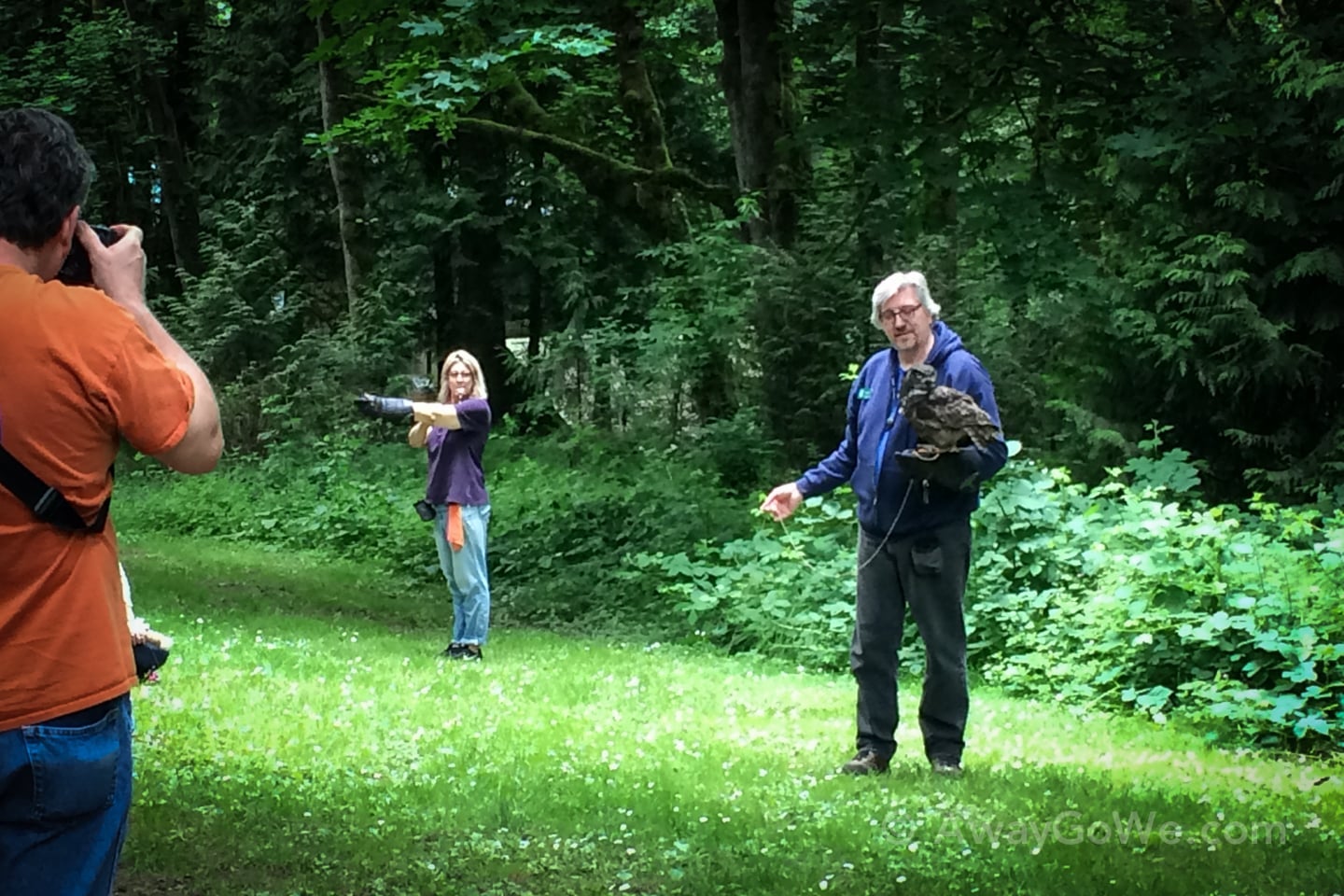 With miles and miles of lovingly maintained trails and tons of bird and wildlife viewing opportunities (including a building devoted to housing rescued animals) the Audubon Society is another one of Portland’s most interesting outdoor destinations.

Oh, and if you’re lucky and happen to be walking Wildwood Trail on a Sunday, you may run into folks from the Society re-training rescued birds of prey in a meadow just off the trail (see above). 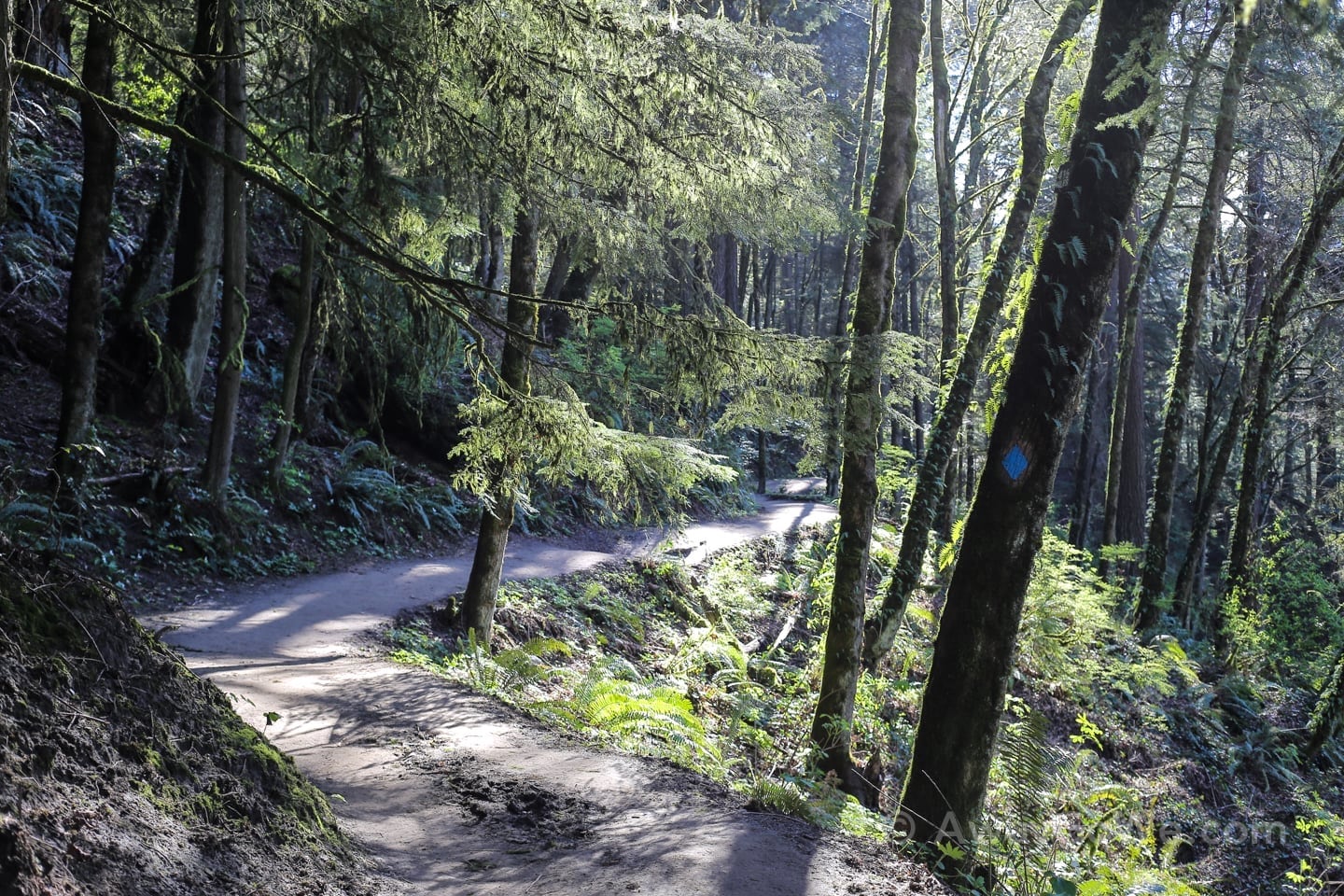 After bidding adieu to Mr. Owl and friends, we dip back into the forest and follow the trail deep into Balch Gulch. 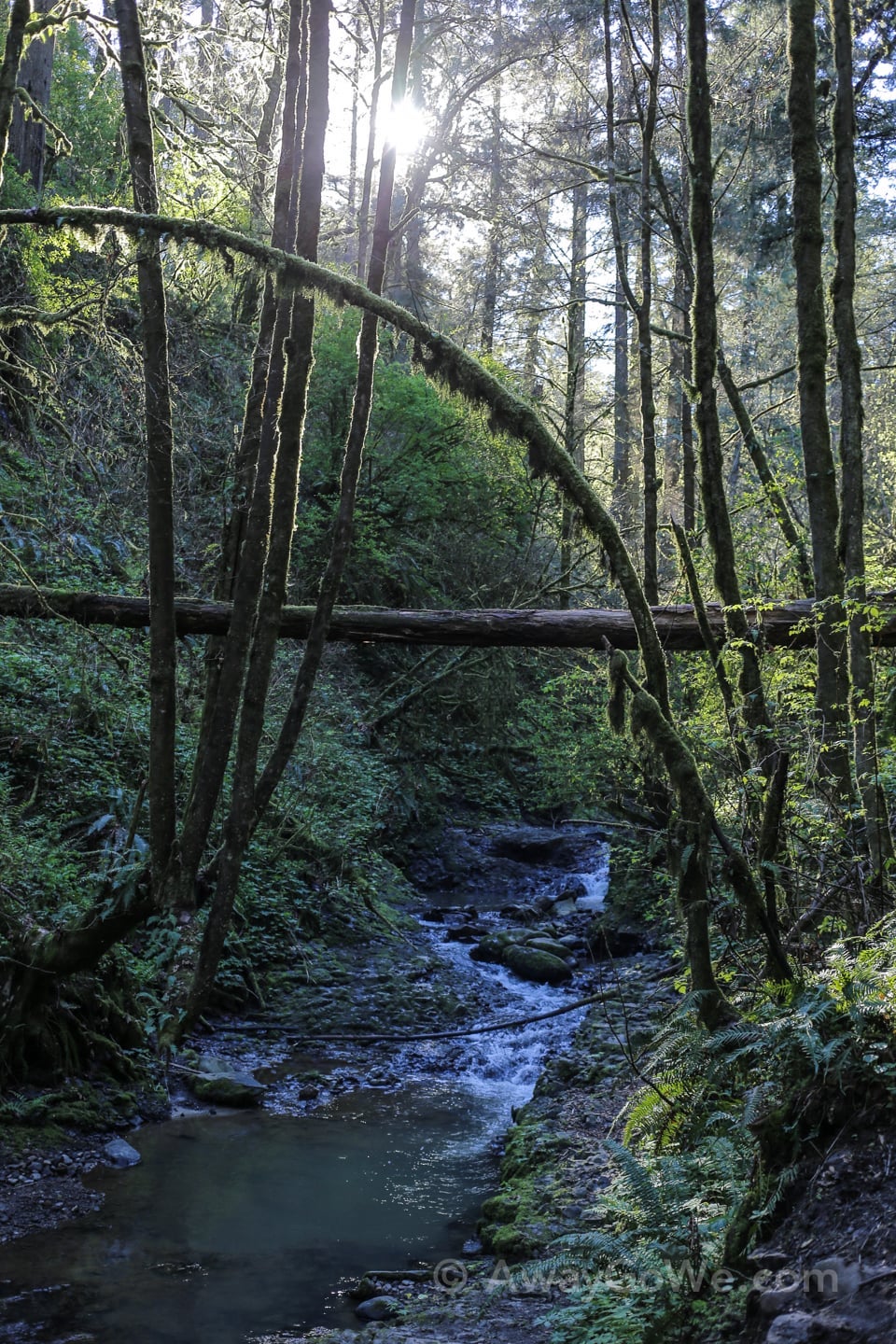 We cross Balch Creek and continue along the left side of the creek towards the Witches Castle and historic Thurman Street Bridge. 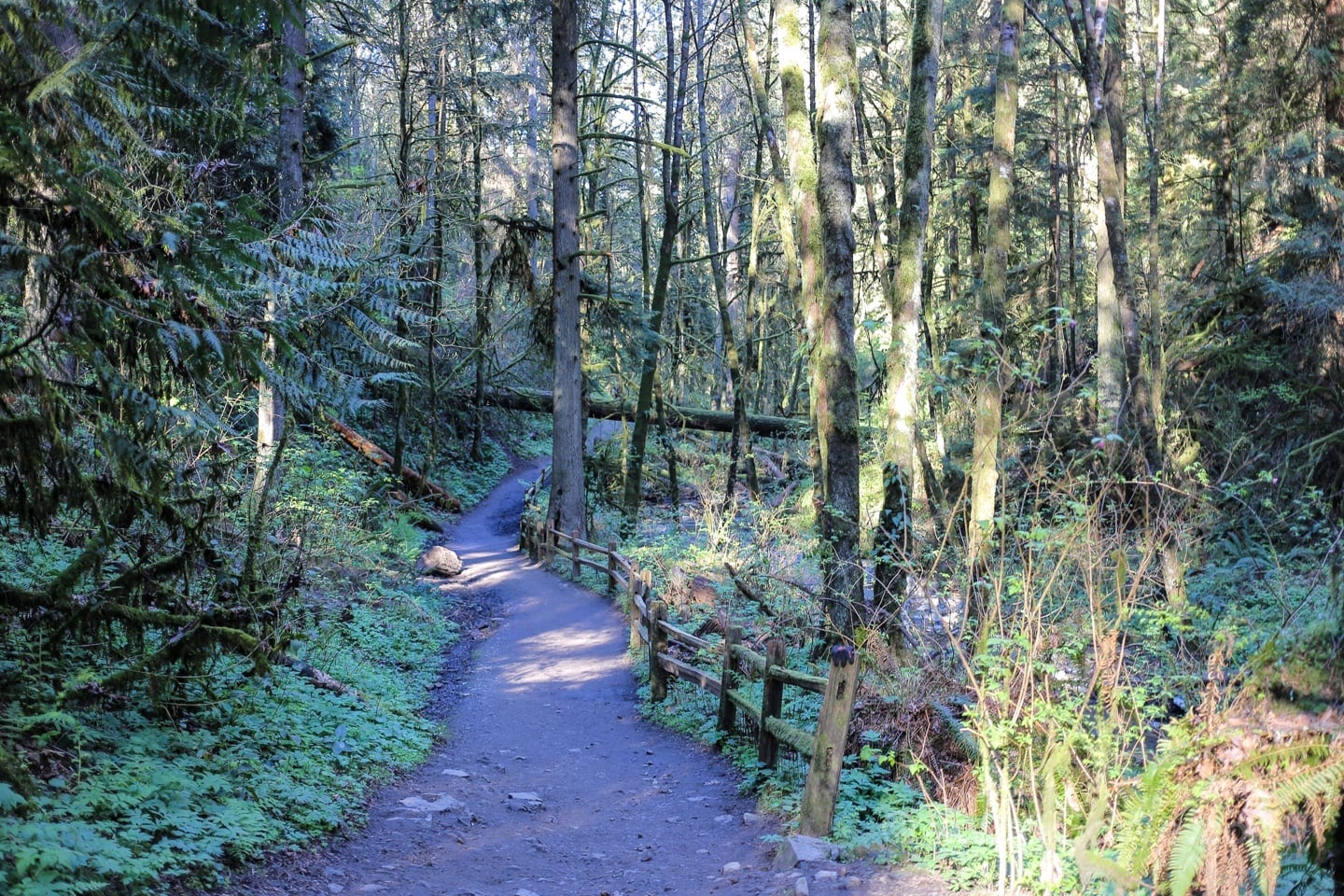 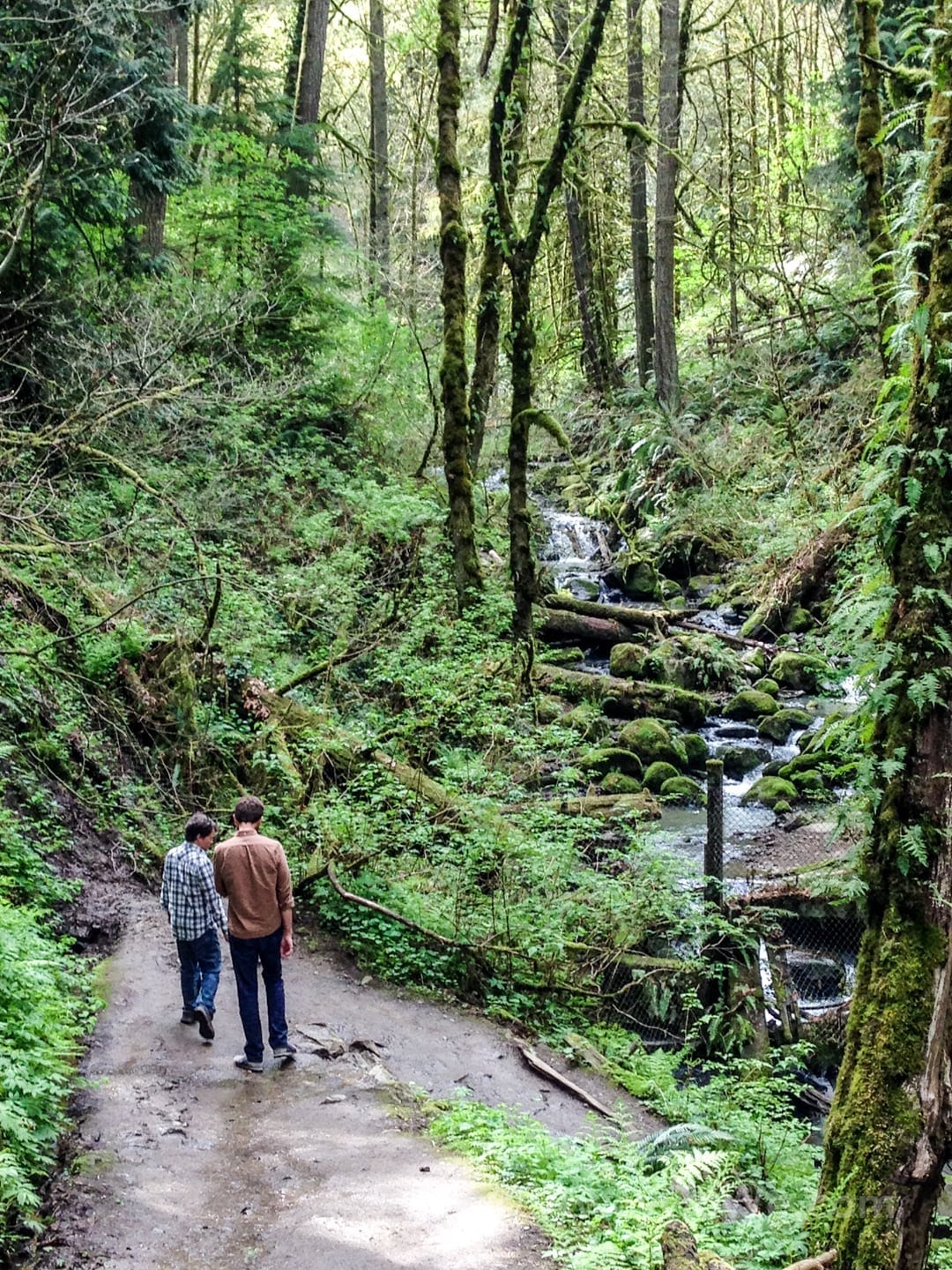 Some time later, we arrive at the so-called Witches Castle, which is actually an old abandoned stone restroom built by the park service in the 1950s and destroyed in the mighty Columbus Day storm of 1962. It got its name “Witches Castle” from numerous paranormal sightings and experiences reported in and around the structure over several years. Many local residents attribute such sightings to the circumstances surroundings its former residents.

Balch Gulch is named for one Danford Balch who laid claim to the land in 1850 and lived here with his wife and nine children. In late 1858, Mr. Balch shot and killed an itinerant worker named Mortimer Stump who had previously helped Balch clear his property. Mr. Stump had run off with the Balches’ 15-year-old daughter and it was widely believed that Mrs. Balch cast a spell on Mr. Balch making him murder his young daughter’s lover. Danford Balch became the first person in the state of Oregon to be hung for his crime.

Today, the ruins of the old stone restroom in Balch Gulch is a popular stopping place near the heavily trafficked junction of Wildwood and Lower Macleay trails. Apparently, the structure is also popular with vandals/”artists.” 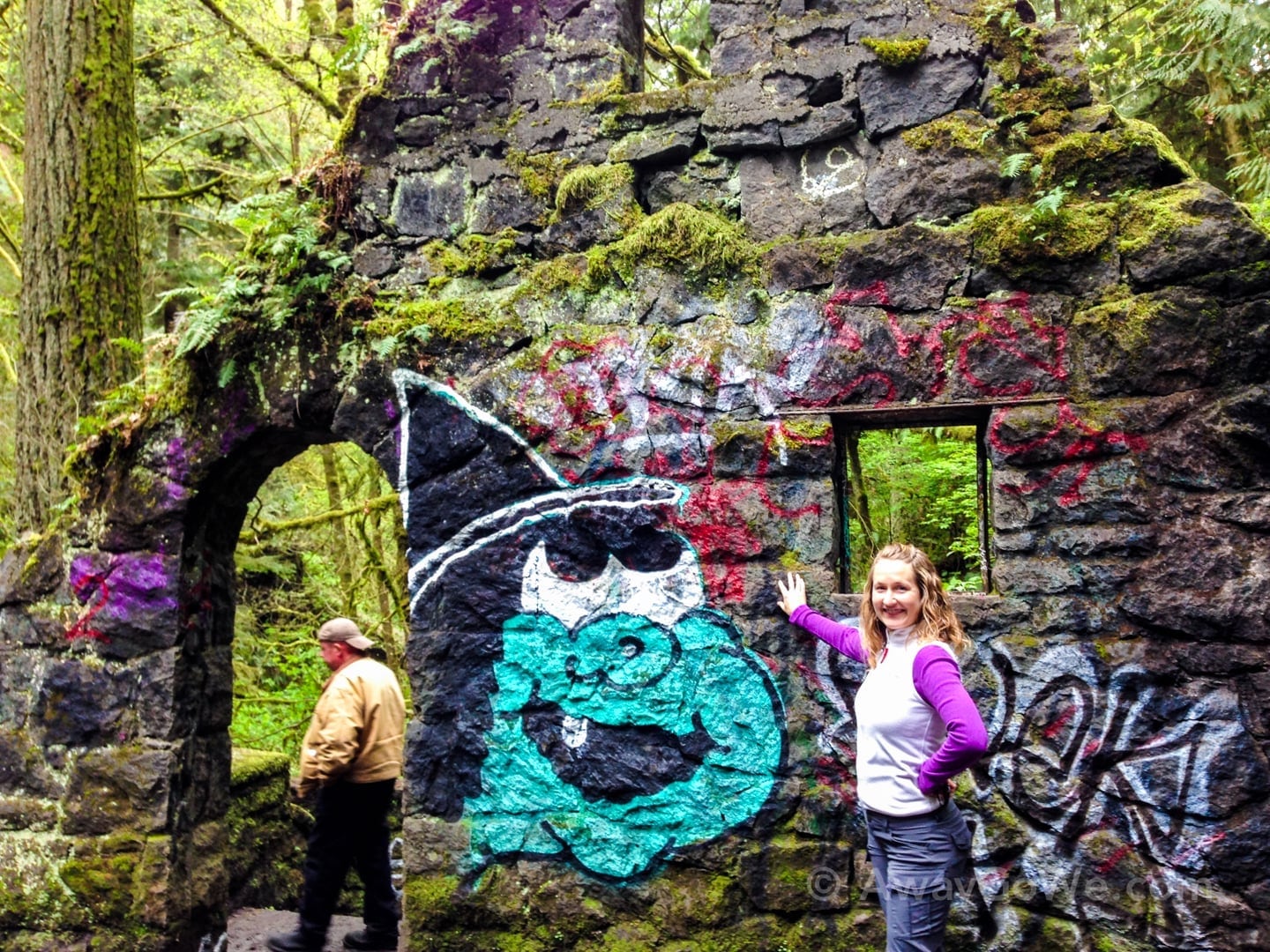 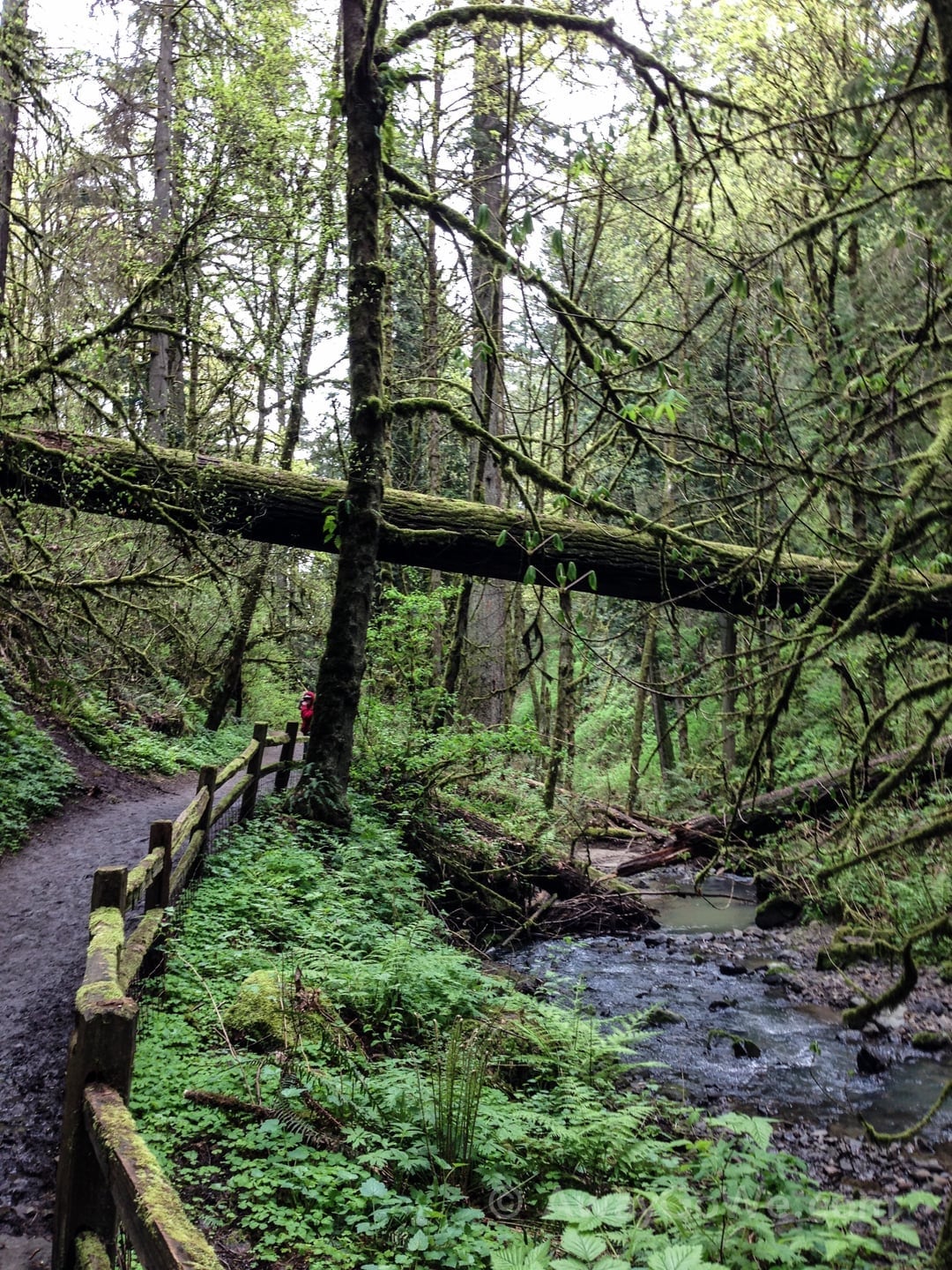 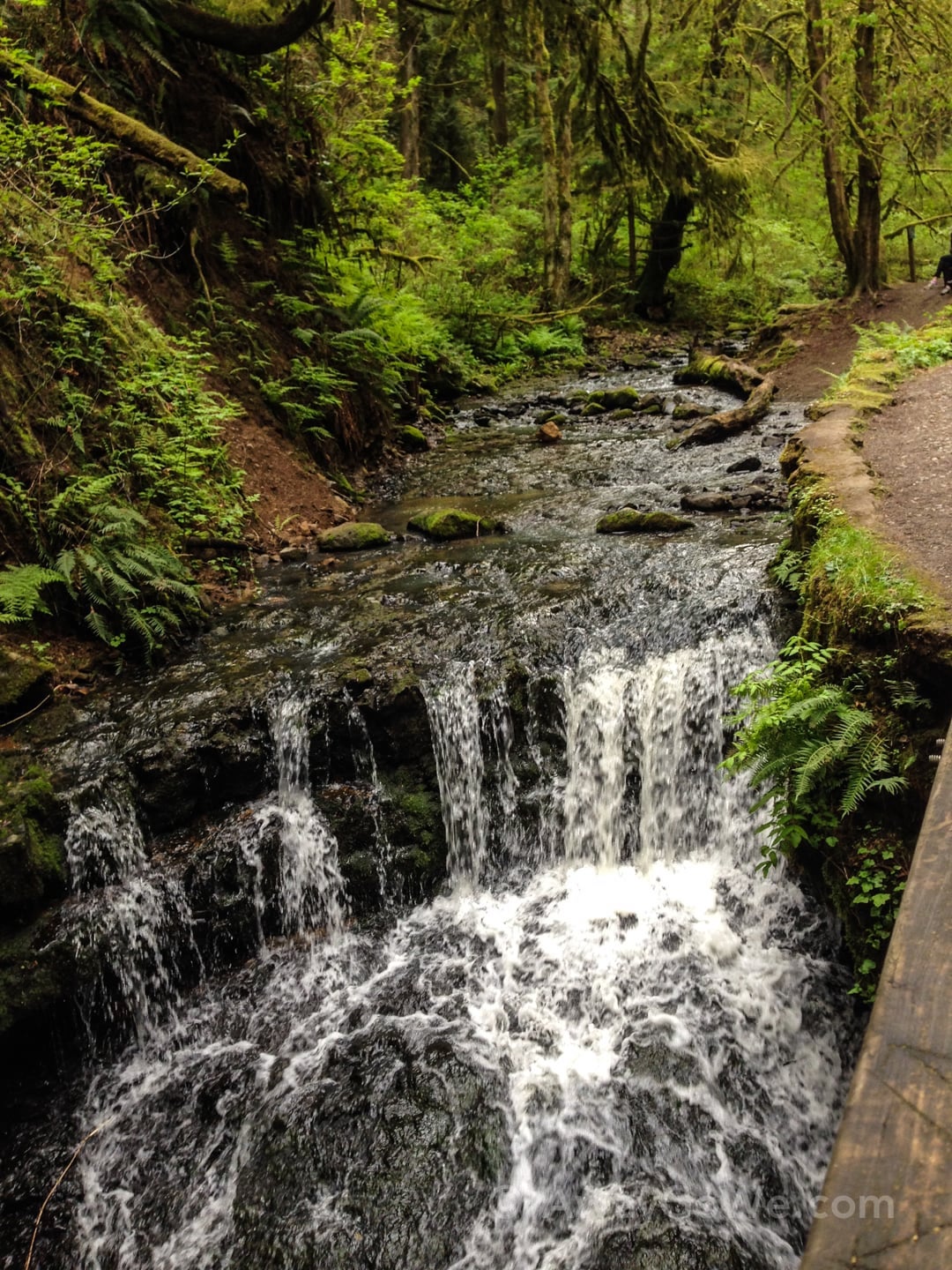 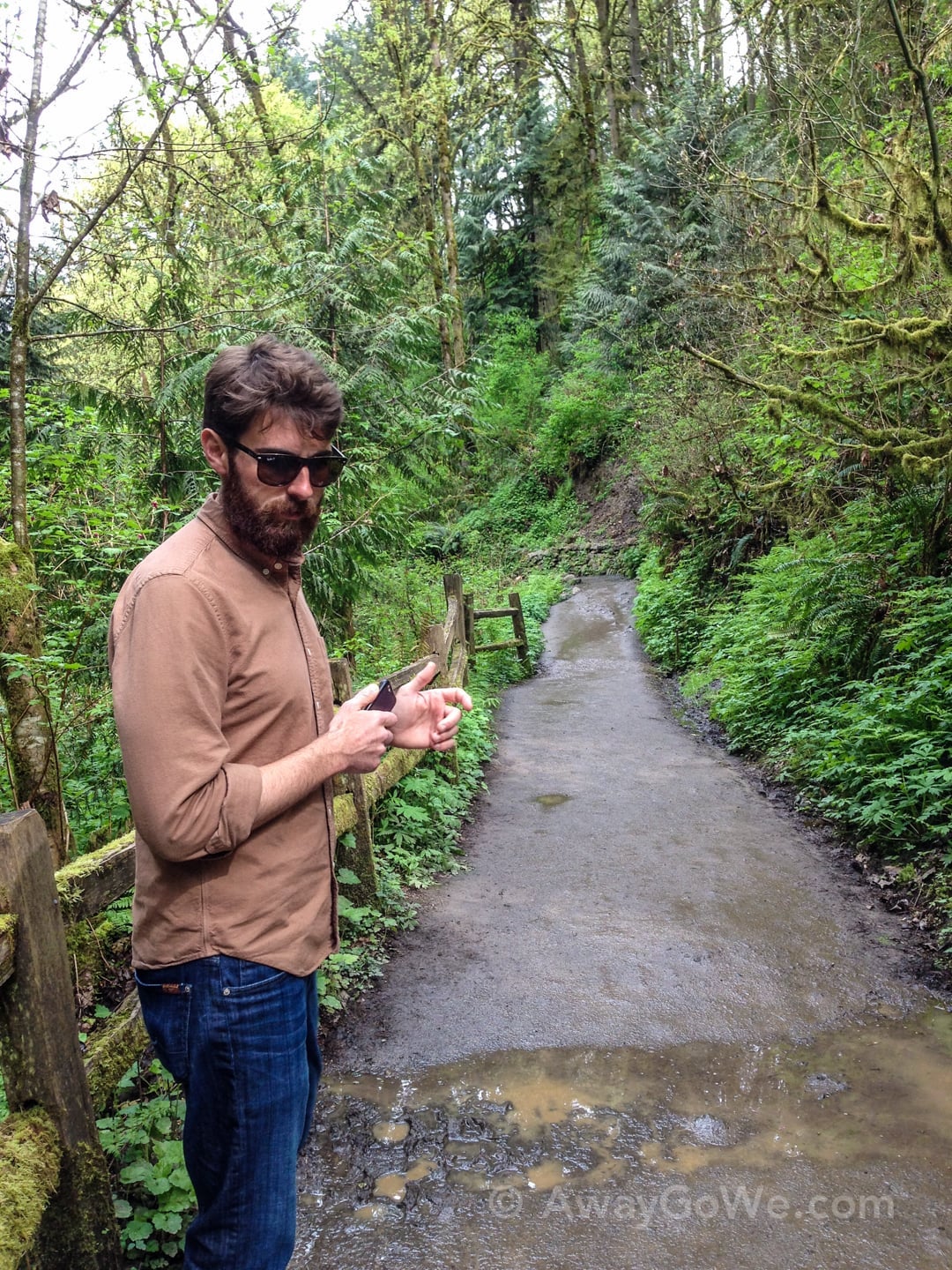 Don’t worry folks — this guy, and his lovely beard, are with us.

In other news, I happened upon this little guy on a recent jaunt down through the gulch. 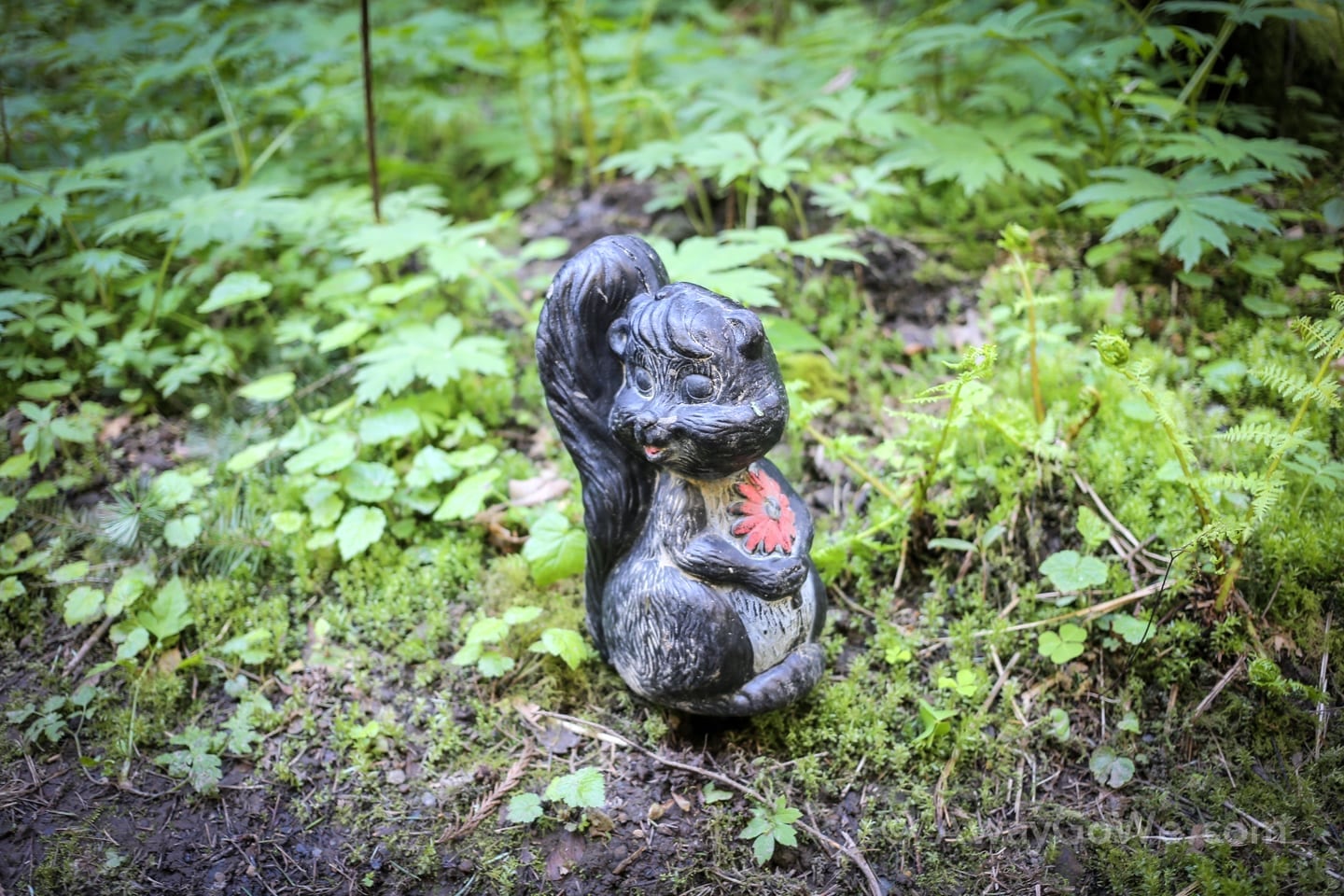 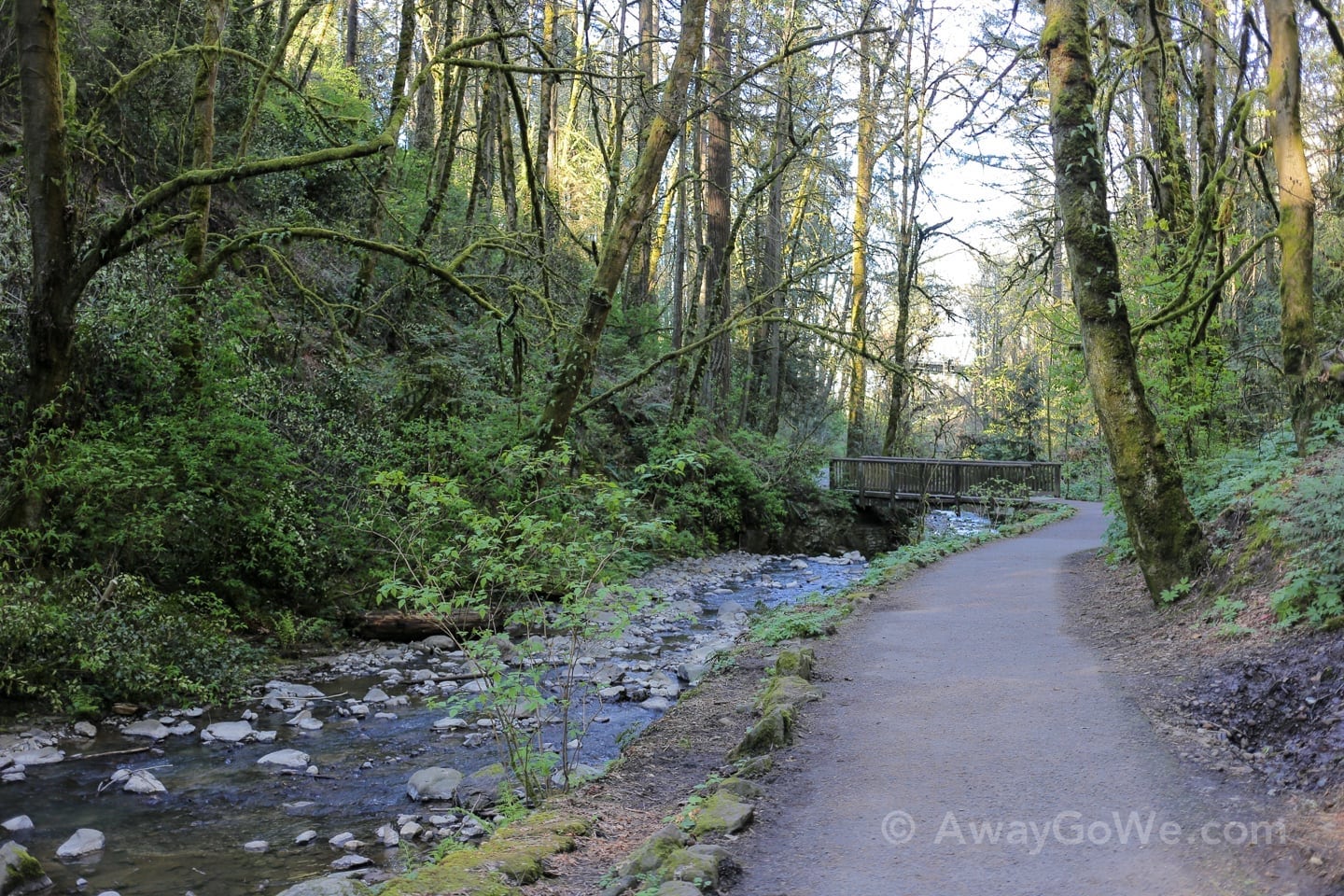 Shortly after Lower Macleay Trail crosses back over to the left bank of Balch Creek, the path empties out into Lower Macleay Park, marked by the Thurman Street Bridge overhead.

At 111 years old, this bridge is the oldest intact span in the region and one of only a handful of its type in the entire nation.

Unfortunately, I realized that, of all the times we’ve done this hike I’ve never snapped a photo of the bridge, nor can I seem to find one in the public domain. So, I guess you’ll just have to use your imagination (or your Googimation) for now.

Booking.com is a trusted partner of AwayGoWe Travel Blog 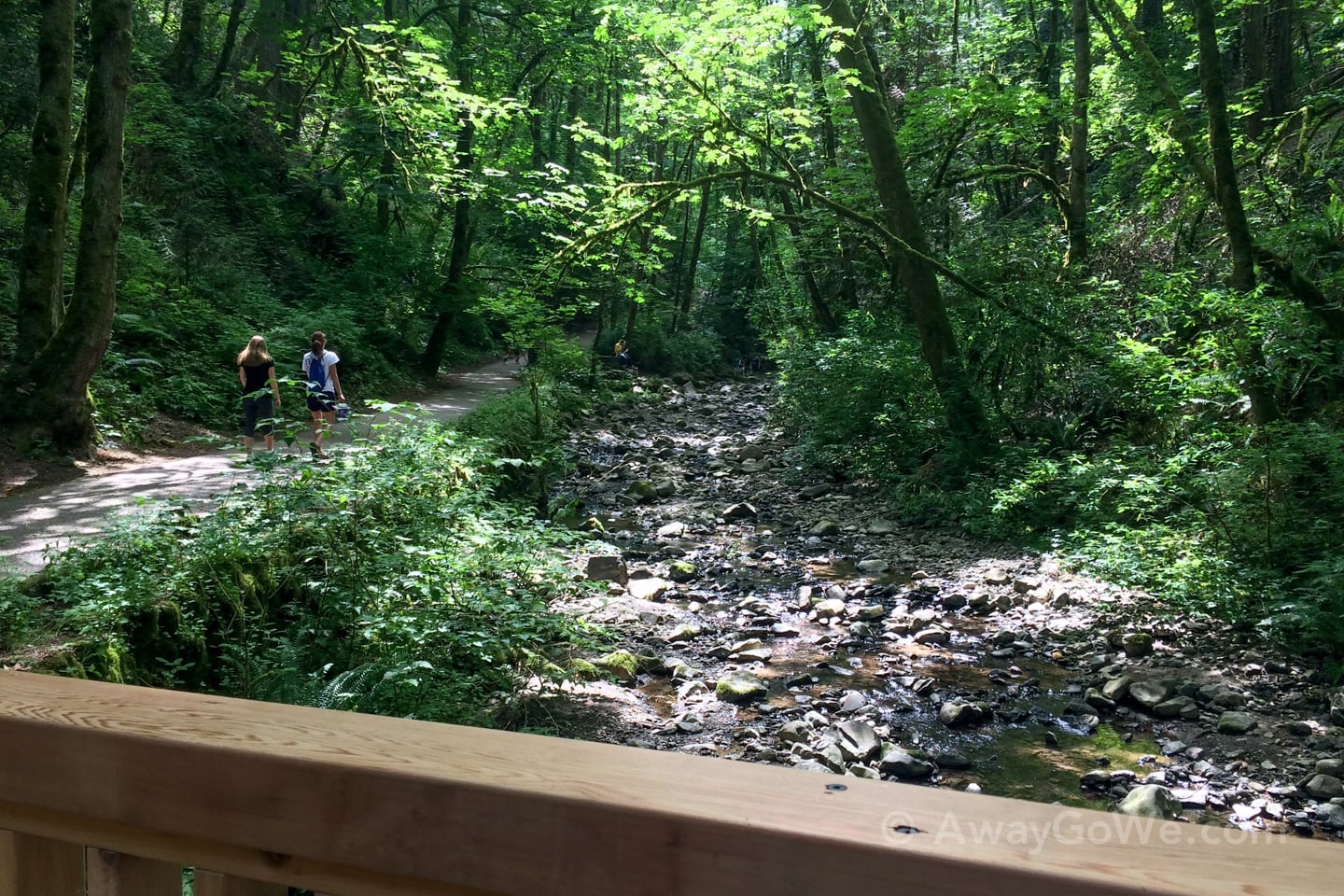 The flowering trees bloomed early this year. I took this a block away from our place after returning from doing the route in March. 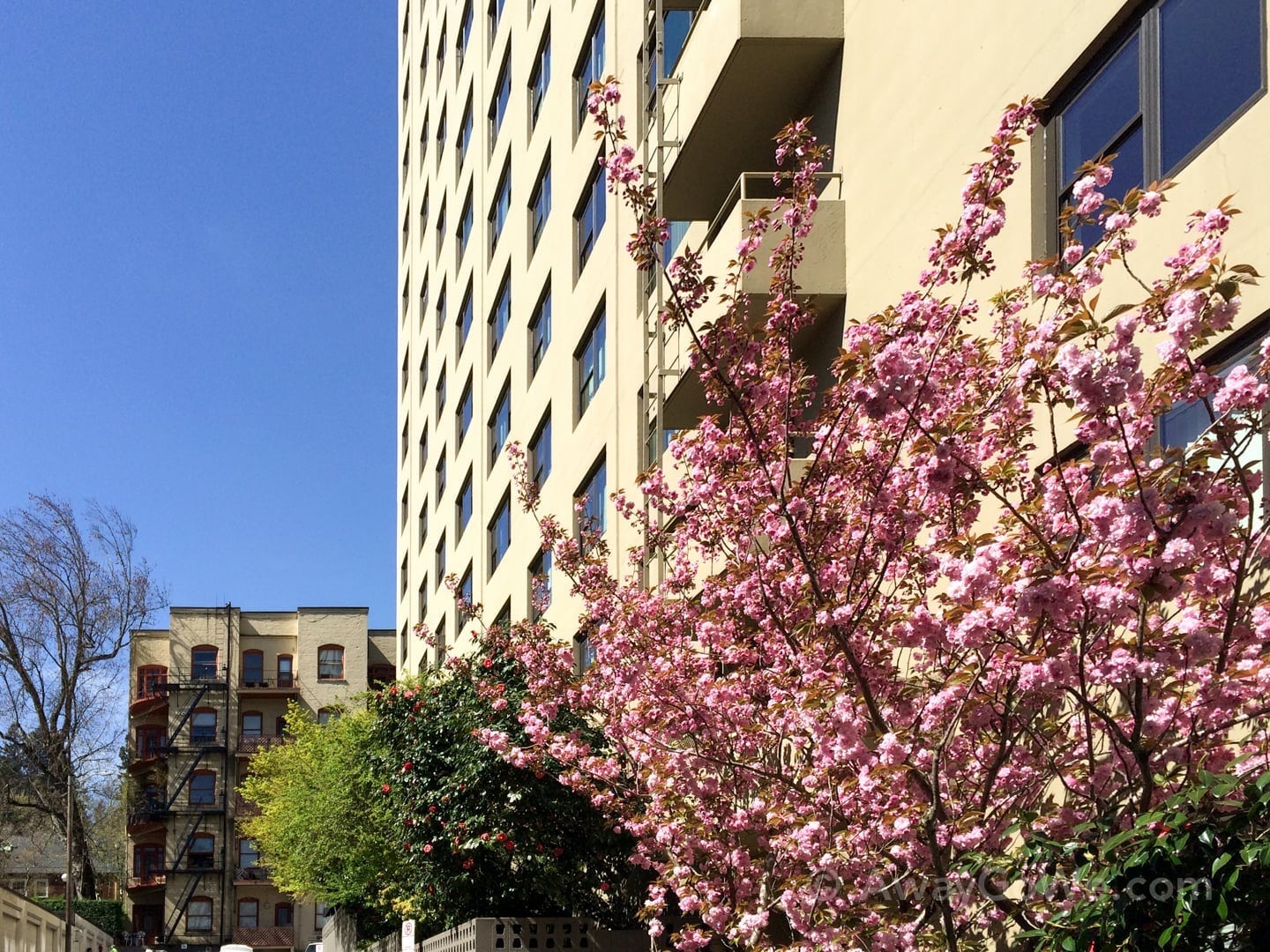