Sleepin’ With Camels In The Desert

We arrange a camel safari with some local guides through Badal House and venture farther into the Thar desert a mere 40 miles from Pakistan.

About a month into our time traveling through India, we found ourselves in the western state of Rajasthan in the tiny desert village of Khuri, about 40 miles from the Pakistan border.

We arranged a camel safari with some local guides through Badal Singh (proprietor of Badal House in Khuri — contact by phone: +91 8107339097), which set us back 550 rupees ($11 USD) each. The trek left from Badal House around 4pm local time and returned around 9am the next day and was all-inclusive (dinner and breakfast on the dune, camels and guides, bedding, water, etc.).

We had been looking forward to our camel trek for as long as we had been traveling in Asia and can say in retrospect that it surpassed our expectations. While day treks and multi-day treks are offered, we found that the 17 hours in the desert (6 of which were spent atop a camel) was the perfect amount of time for what we did.

We were a bit surprised that they had us leaving so late in the day and returning early…until we had been on the camels a while. For one, as romantic as it may sound, you really don’t want to be caught on one of these guys in the heat of the day in the middle of the desert. Two, and certainly just as important, riding a camel for any period of time does a number on your thighs and butt and it took both of us a couple of days afterwards to be able to walk normally again.

Heading Out to the Desert

You may be surprised to see so much green in the middle of the Thar Desert. We were. The desert outside of Khuri is only like this for about a month out of the year following the rains. The rest of the year, it’s dry and barren. However, the sand dunes — for which Khuri and this portion of the Thar are known — remain free of vegetation year round, and that’s exactly where our guides assured us we were headed this particular afternoon. 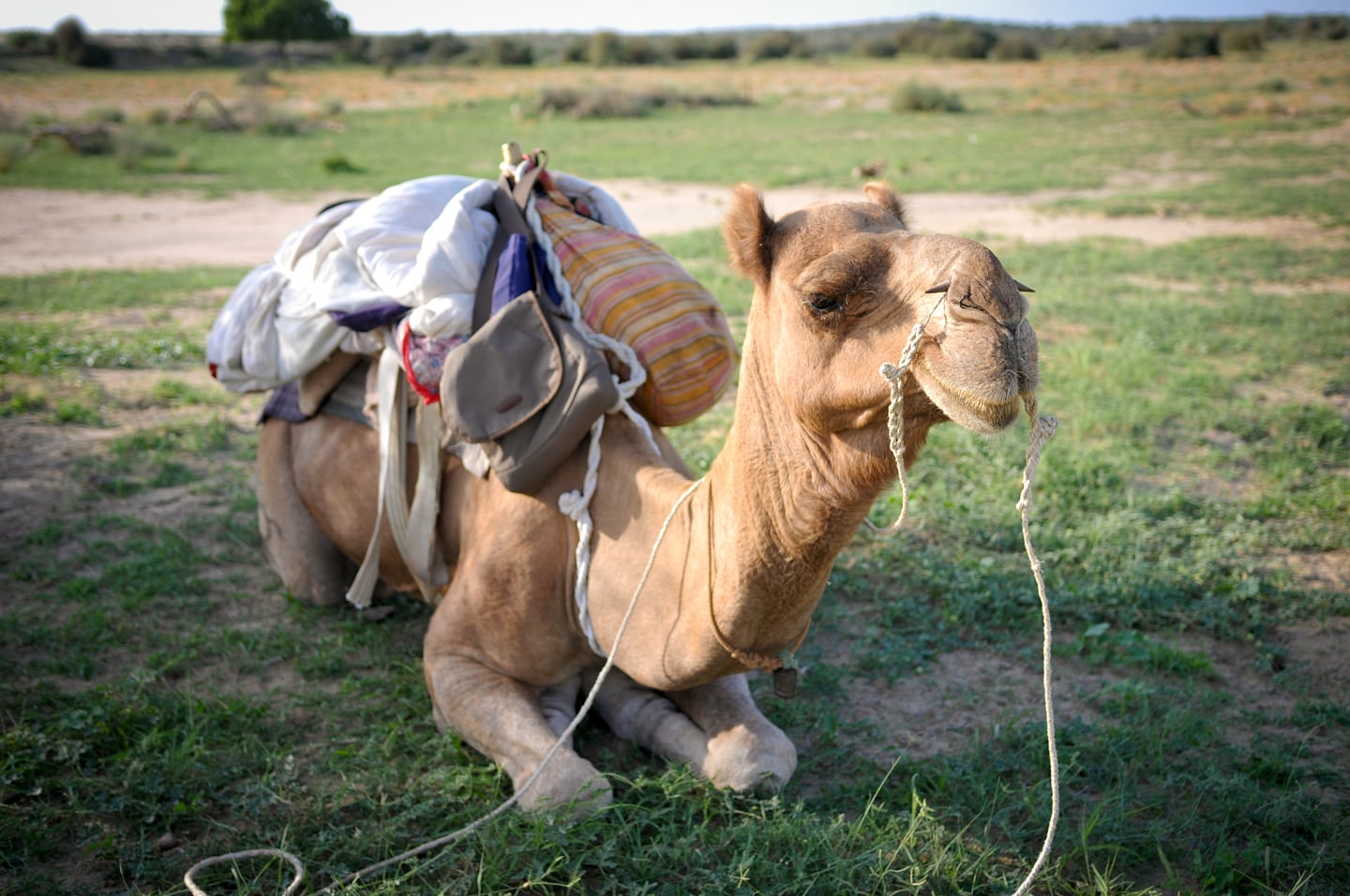 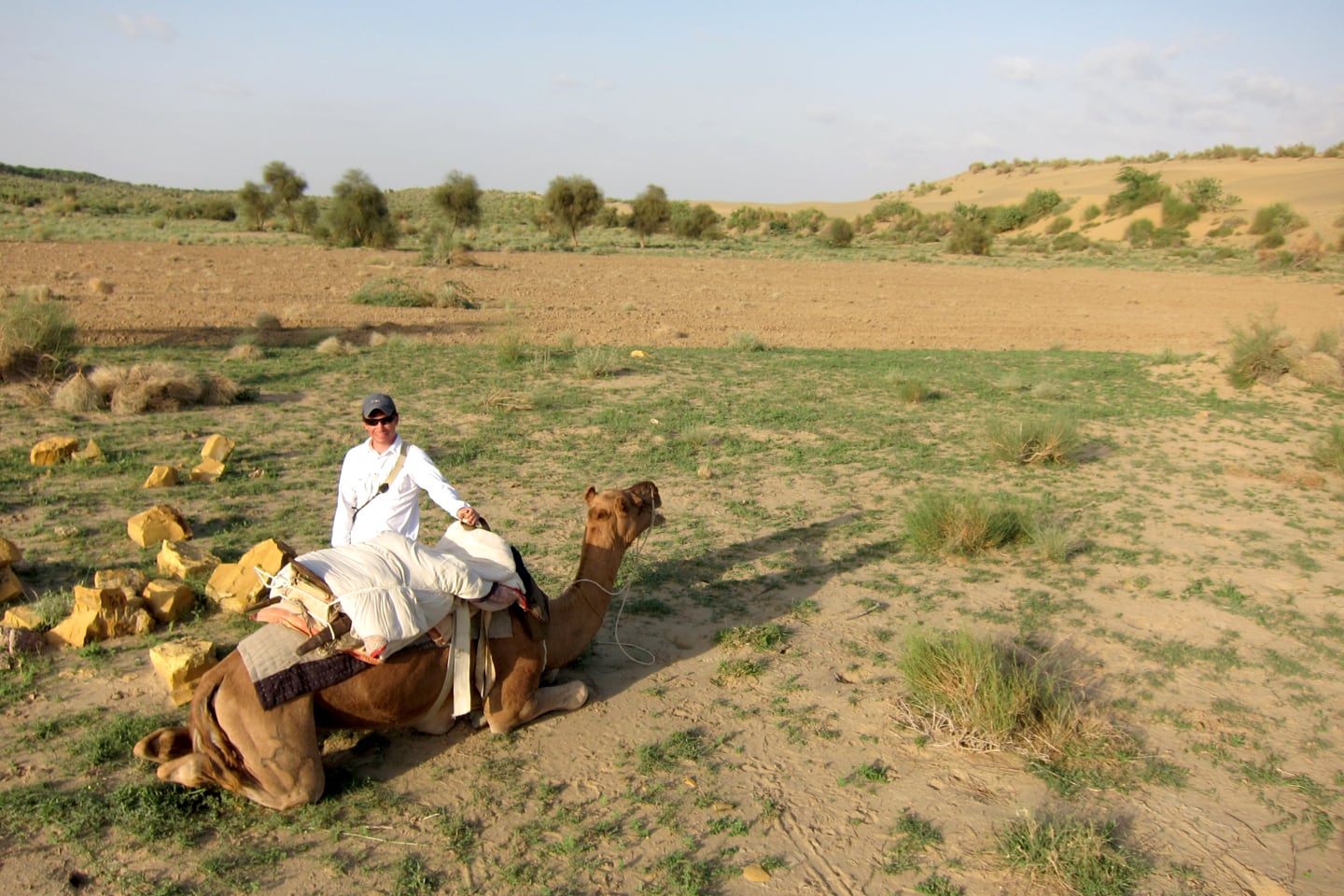 I was actually surprised by how well the camel drivers treated the camels. You could tell that each of the drivers had a special bond with their large one-hump friend. While our drivers had led hundreds of camel trips, camel trekking was not their day job — and you could tell that they really looked forward to leading these trips whenever they got a chance and loved being out in the desert. They’re love of their job and easy demeanor made the two of us feel at ease about spending a night with two complete strangers underneath the stars and far away from civilization. 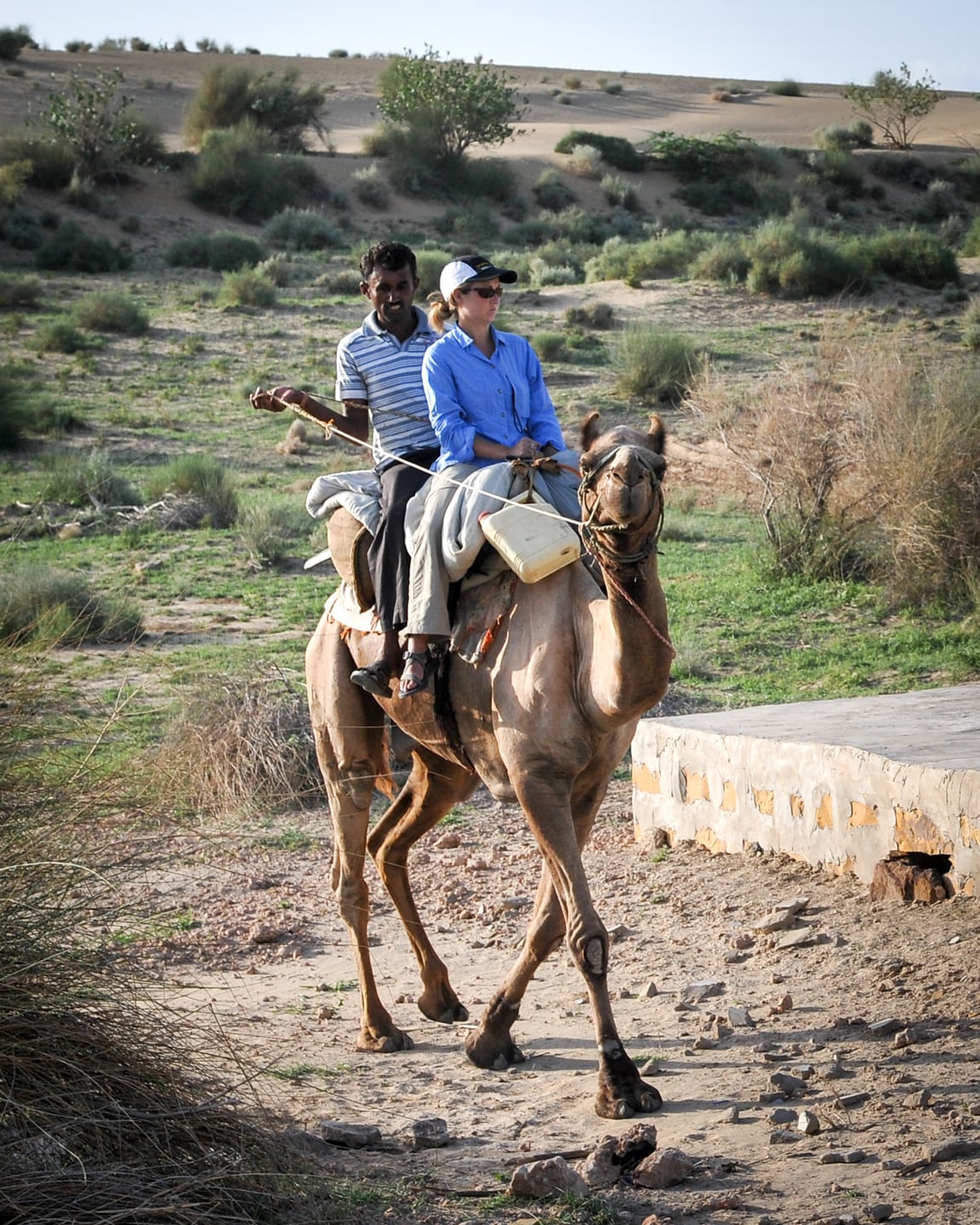 We had originally planned on arranging a camel safari around Jaisalmer, a much larger city and the main jumping-off point for such treks. After arriving in Jaisalmer we quickly learned that the vast majority of treks out of the city had become overly touristic and crowds on the outlying dunes were common. Consequently, we looked elsewhere for alternatives and came across Khuri, a small village about an hour south of Jaisalmer. After returning from our night in the desert we were incredibly pleased with this decision given that we never saw another single foreign traveler in the desert (and only two other humans the entire time we were out). It was an incredibly peaceful and awe-inspiring trek and one of our highlights of our time in India. 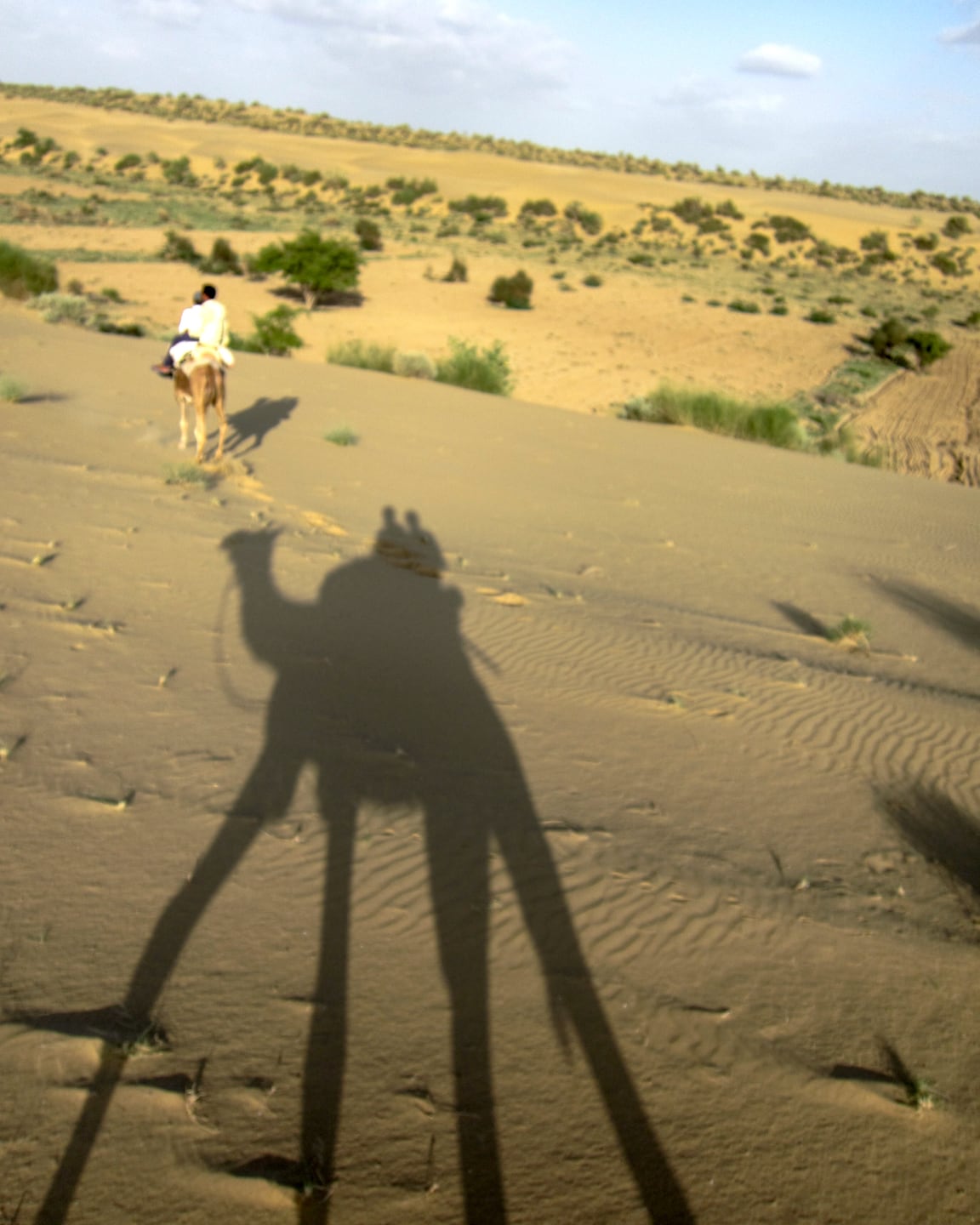 Arriving at Camp on the Dune

Despite the unavoidable dusting of sand in our bowls, dinner was pretty good. Everything was prepared fresh over a tiny fire using ingredients from the village. Most people in these parts are vegetarian, and our meal was vegetarian as a result (potato and veggie curry with roti bread made while we watched the sun set). Dinner, as with every meal we had in the desert, was accompanied with a small bowl of loose-leaf chai. 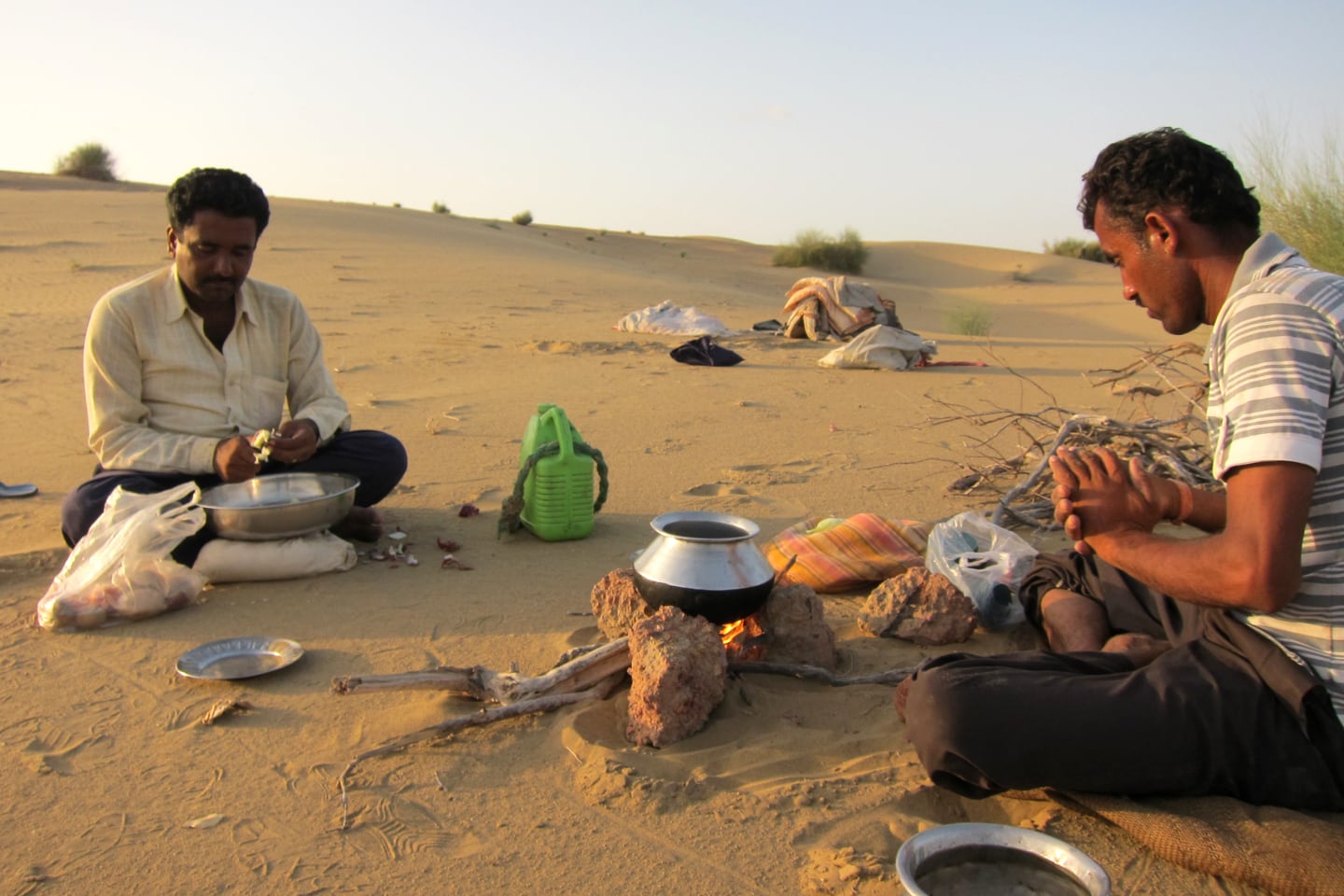 Sleeping in the Desert & Sunrise

It would be a bit of an understatement to say that it was a long night.

It had been a fairly hot afternoon and the heat alone (and the absence of a good breeze) was enough to make sleep very difficult. Our bedding was actually quite comfortable — a couple of very thick blankets over packed sand and some nice pillows. We each had brought a silk sleep sack which came in handy in the early morning when temperatures finally dipped into chilly. Mosquitos and most other insects were not a problem, but we had a number of dung beetles constantly trying to climb into bed with us.

Additionally, two wild dogs appeared in the night, waking us a number of times while sniffing around our heads or fighting over the prized territory which included our dinner scraps about 50 meters away. I won’t lie, being jostled out of sleep in the middle of the night by a growling animal nipping at your ear in the middle of the desert is actually a pretty terrifying experience. Mind you, it was pitch black with zero ambient light save for a sky awash in stars and a faint moon on the horizon. We were horrified by the silhouette of a wild animal circling our tent, growling, sniffing, scratching — until it awoke our guides who promptly tossed something at it, muttered a few angry explicatives and went back to sleep. After that, we figured if they weren’t worried, we wouldn’t be — yet the beast remained about 10 feet away from our blanket for the rest of the night, making any significant level of sleep impossible.

Despite these annoyances and the relatively small amount of sleep we were able to manage, sleeping on a dune in the middle of a desert under a full sky of bright stars was a once-in-a-lifetime experience and worth every minute. Yes, I could have had an absolutely fantastic night’s sleep in a hotel room with air conditioning and bathroom, but 50 years from now would I likely have remembered that night? No way, and that’s the beauty of a night spent like this — and it definitely makes you appreciate that aircon bed and bathroom all the more the next time you find yourself in one.

In all, it took about 3-4 hours to get to camp and about 90 minutes to get back. The main reason for this was that we took the scenic route in and a bee-line back. On the return journey we were accompanied by one of the dogs which tormented us throughout the night. At one point, the dog caught and killed a young gazelle. To my surprise, this deeply affected our guides — one of them jumping off their camel (literally jumped) to tackle the dog, beating it until it let go of the small animal. The camel driver then spent the next 10 minutes trying in vain to resuscitate the cat-sized animal, gently compressing its chest accompanied every so often with a wack upside the head. Finally, realizing that his attempts were futile, he surprised us again by essentially giving the animal to the dog and heading on his way.

[…] Sleep on a sand dune under the stars in Rajasthan, India […]

What fun even without sleep! An adventure for sure!