Gone are the glory days of the Darjeeling Himalayan Railway (aka “Toy Train”), yet, this little steam engine that could survives, plying its way through some of India’s most amazing Himalayan scenery.

Long gone are the glory days of the Darjeeling Himalayan Railway (DHR), better known as the “Toy Train.” Yet, the little steam engine that could survives, albeit in a very limited capacity, plying the 4 mile (7km) stretch of narrow gauge track between Darjeeling and Ghum (Ghoom). For just $4 USD, you can take the venerable UNESCO icon on a two hour roundtrip journey through some of India’s most amazing Himalayan scenery. It’s a bargain and an unmissable experience. 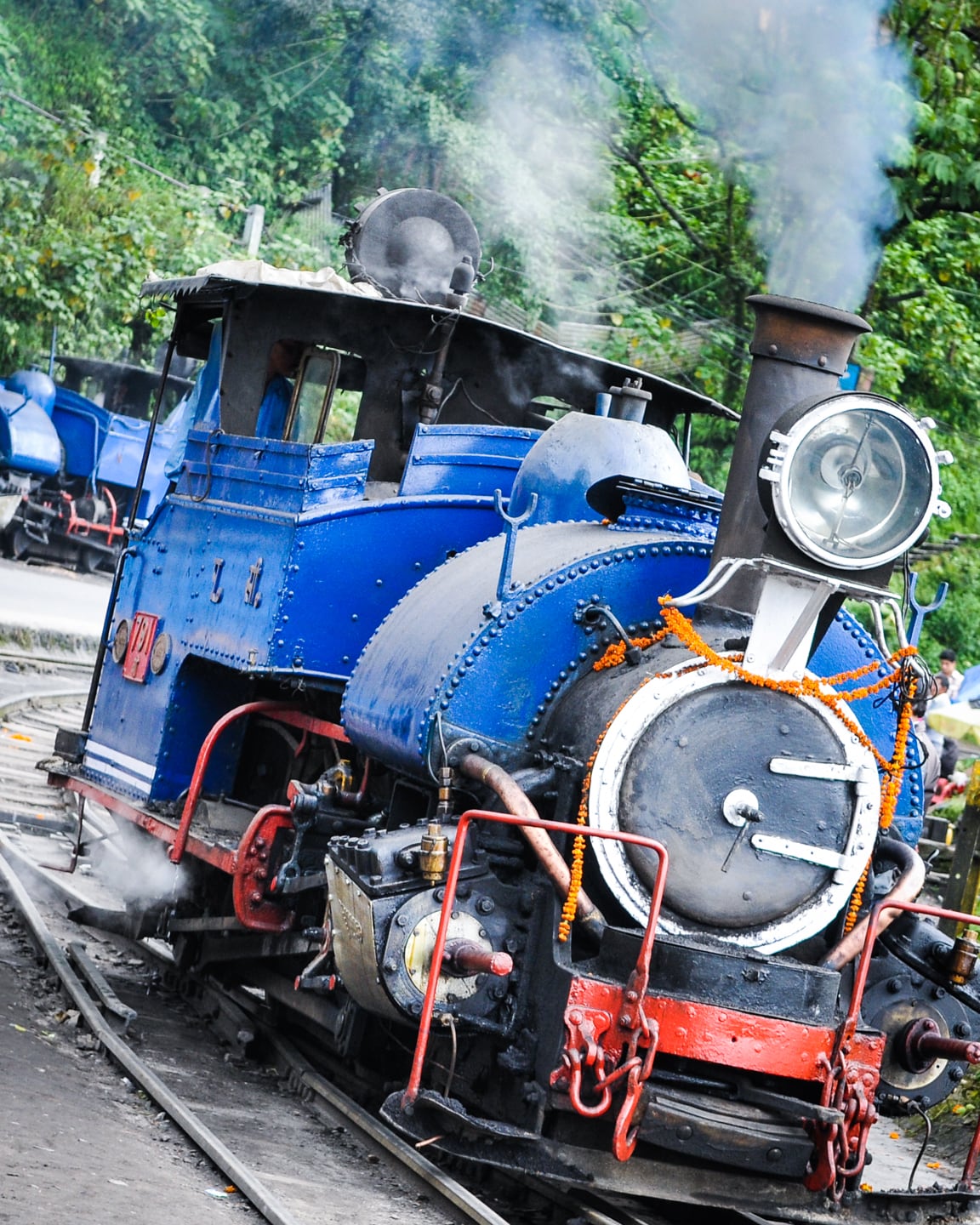 Read our post on the hill station of Darjeeling here.

In its heyday, it was possible to ride the entire stretch by classic B-Class steam locomotive, but in recent years service has been reduced to the stretch from Kurseong and Darjeeling via modern diesel locomotive and between Ghum and Darjeeling via B-Class steam engine. Currently, there is no service between New Jalpaiguri and Kurseong due to significant landslide damage a few years back. This stretch (by far the most treacherous of the DHR) is serviced by public jeep.

The railway utilizes 2 ft (610mm) narrow gauge track (standard gauge is 4 ft. 8.5 in.) and is listed as a UNESCO World Heritage site. It was originally constructed as a way to ferry British aristocrats and goods from the sweltering lowlands to the substantially cooler hill station of Darjeeling in the Himalayan foothills. In later years, it became a key lifeline for getting tea from high elevations to the rest of the world.

The DHR follows the old Hill Cart Road up the mountain. Much of the track lies on the side of the narrow highway, while other portions actually cross the highway. Due to the steep mountain terrain, the DHR utilizes several loops and Z-Reverses (or zig-zags) (see map above).

Maintenance and a Refill

These old steam locomotives require a great deal of maintenance on and off the route. Trains clunk along at a steady pace, resting often for conductor and engineer to adjust a bolt here or oil a widget there or refill the boiler (pictured below). I never gave much thought to how much water it actually takes to power a steam locomotive, but it takes an incredible amount to power this tiny engine as we refilled on the way out and again on the way back on the 8-mile roundtrip journey. The refill station was nothing more than a pipe from a water holding tank about halfway between the two stations. The engine took about five minutes to fill.

A while later, we stopped again on the solitary loop in the Ghum-Darjeeling stretch, Batasia Loop. We hear that on a clear day this point affords incredible views of the Himalayan Mountains including Mount Everest. But today, we were treated to dense fog. At 7,000 feet in the rainy season in India, it’s highly unlikely you’ll see anything but (but one can hope…). 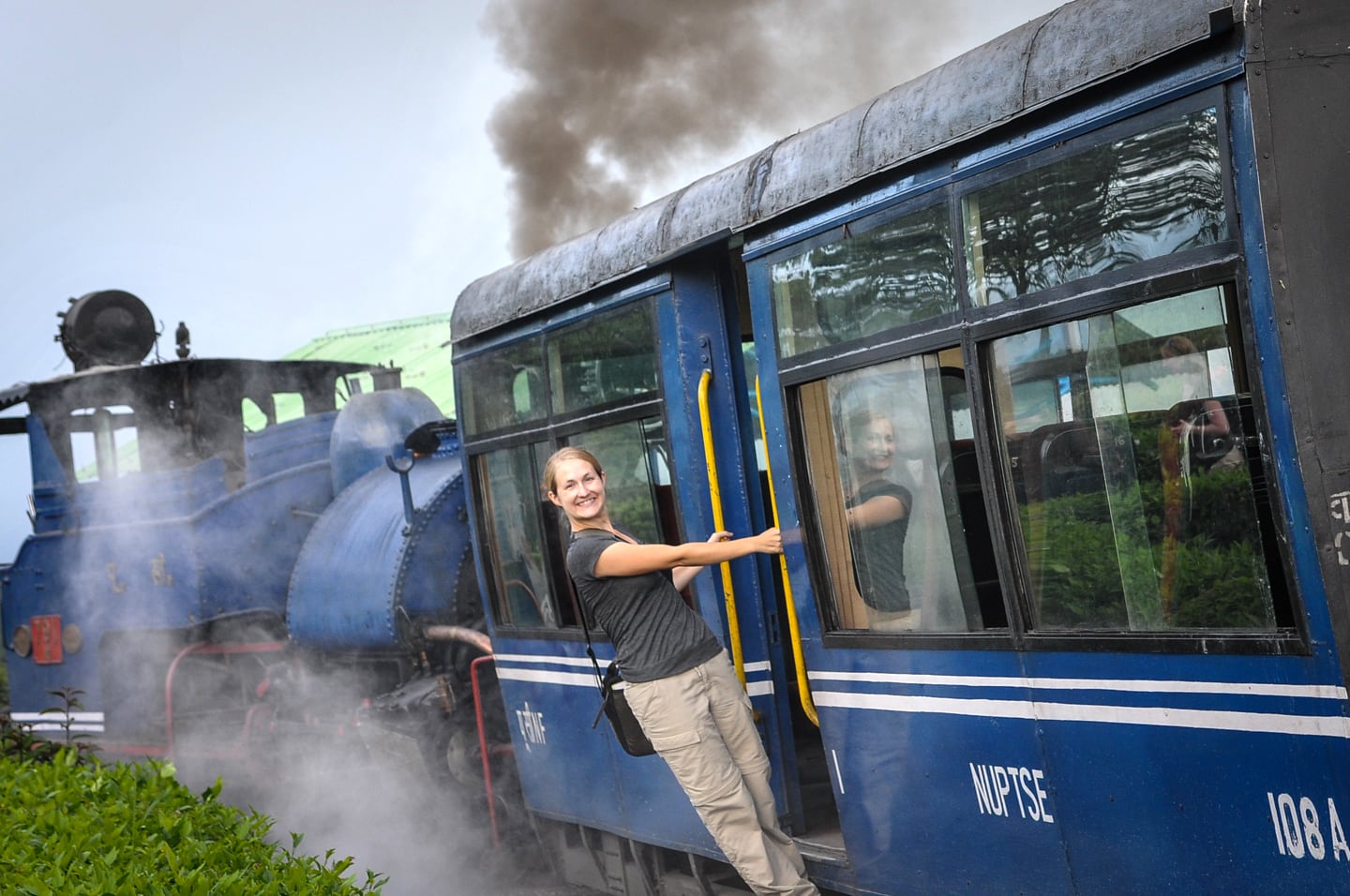 About 40 minutes after our departure from Darjeeling station, we arrived at our destination in Ghum. We rested here for about 30 minutes before returning to Darjeeling. There is a small yet informative museum on the Darjeeling Himalayan Railway conveniently located at the Ghum station which is worth exploring. 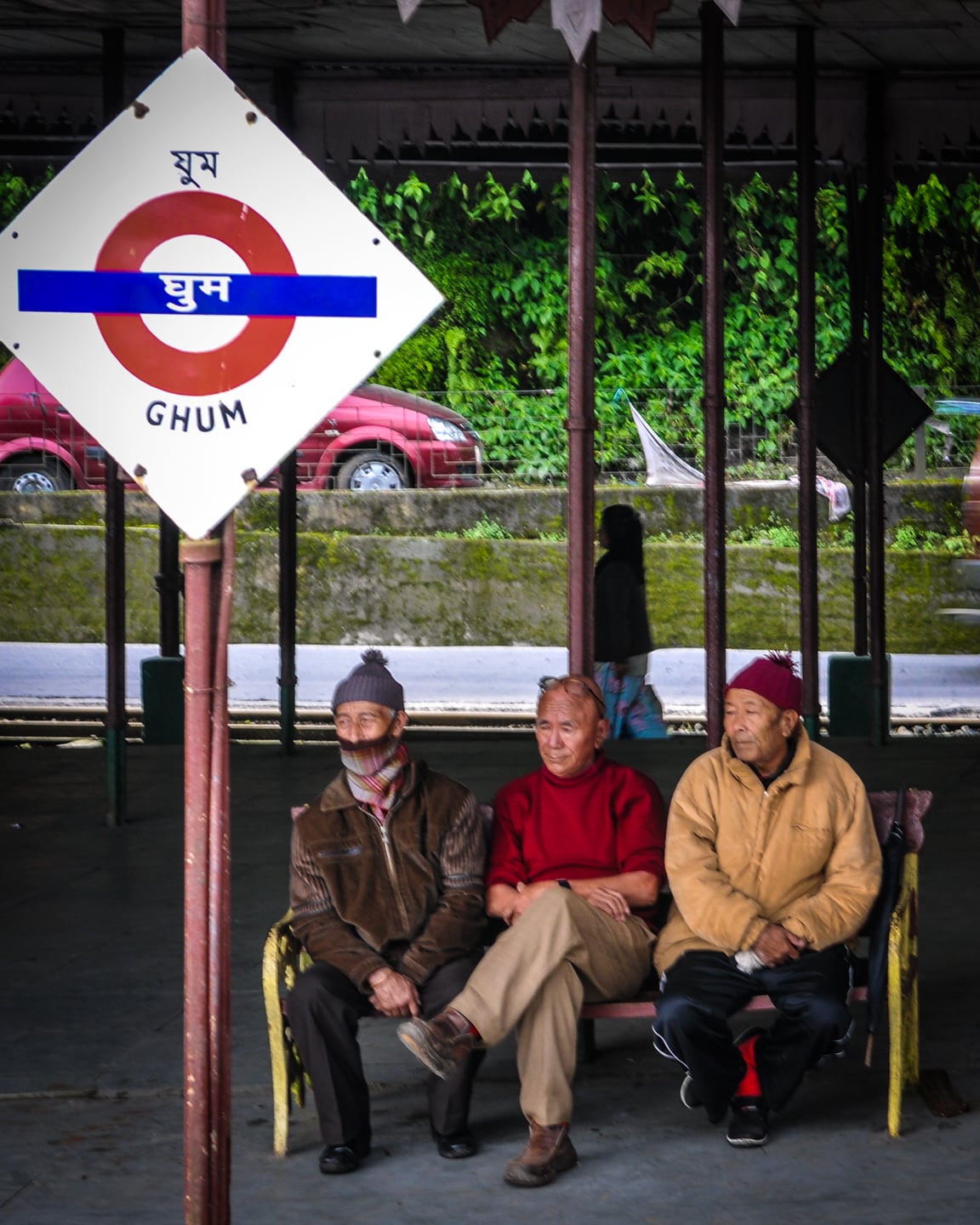 There are a couple of different steam trains that ply the “Joy Ride” route between Darjeeling and Ghum. We were fortunate to get the shinier toy train of the two we saw (the faded, dirtier one is pictured above).

On the way out of Darjeeling, the engine pulled us out of the station in reverse (with the front of the engine facing toward the passenger cars). On the way back from Ghum, the engine faced the proper direction. When we arrived in Ghum, the engine disconnected itself and left us momentarily, circling around the entire station, ultimately coming up around front and attaching itself in the proper orientation. I have my theories as to why they do this, but given we’re in India — the land that frequently seems to defy simple logic — I doubt any of these actually apply. It’s true, I could have just asked, but perhaps I was too terrified of the true answer. 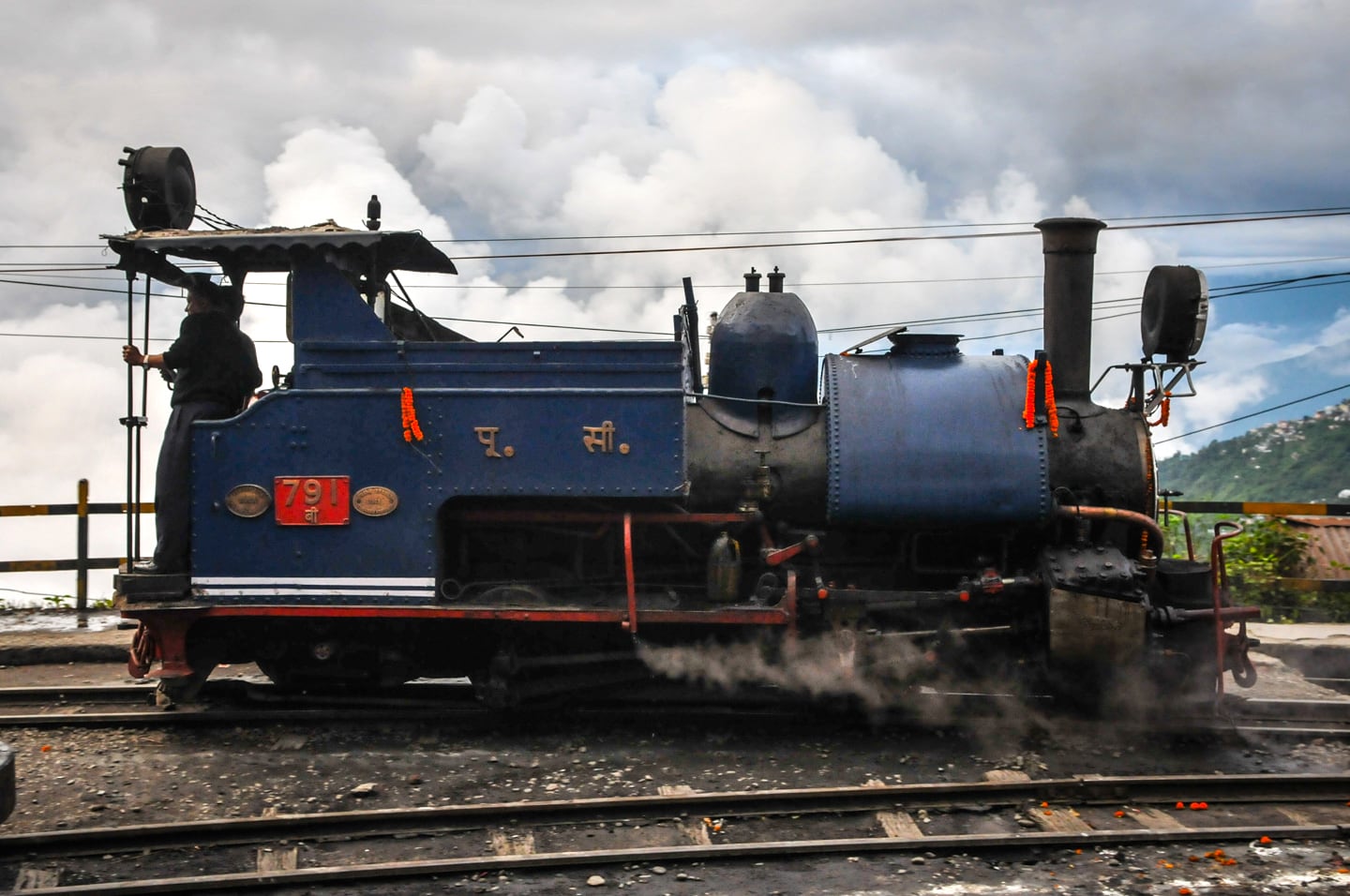 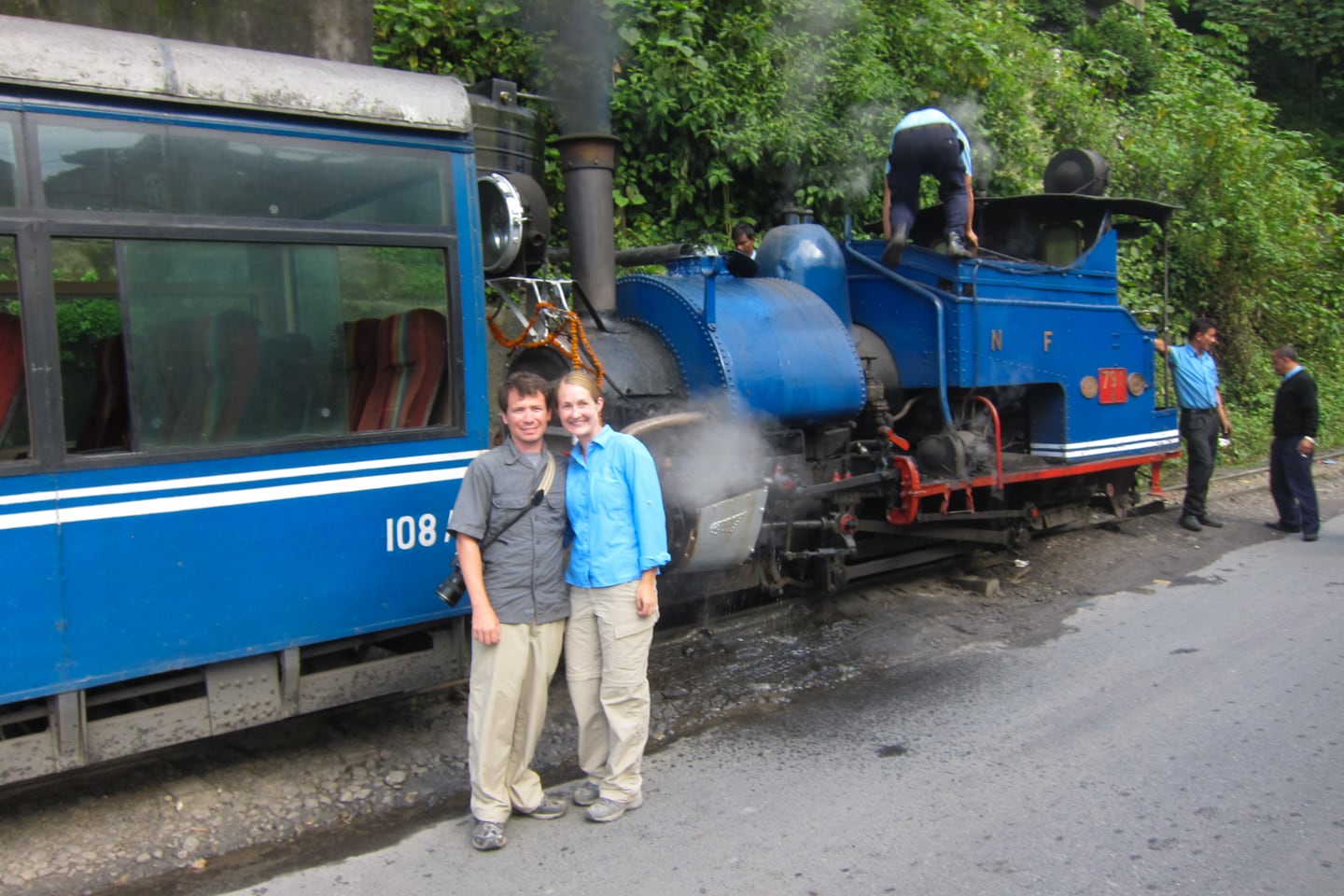 David and Lori, thank you for sharing your memories with us once again.
What a wonderful experience! Almost feels like I was there with you !
GM

We enjoyed seeing “the little engine that could” in action.