The UNESCO town of Hoi An harkens back to bygone days, when trading ships from all of Asia called at this Thu Bồn River port. An important trading center and melting pot of cultures for millennia, Hoi An today is sleepy, beautiful and remarkably well-preserved.

We took an overnight train from Ho Chi Minh City (Saigon) north to Da Nang, and then a taxi van on to Hoi An. We opted for the soft sleeper cabin (about US$50 each, not cheap) and were serendipitously paired with a British couple also traveling on their honeymoon. After five months of riding trains with locals who rarely spoke English, it was a welcome change. 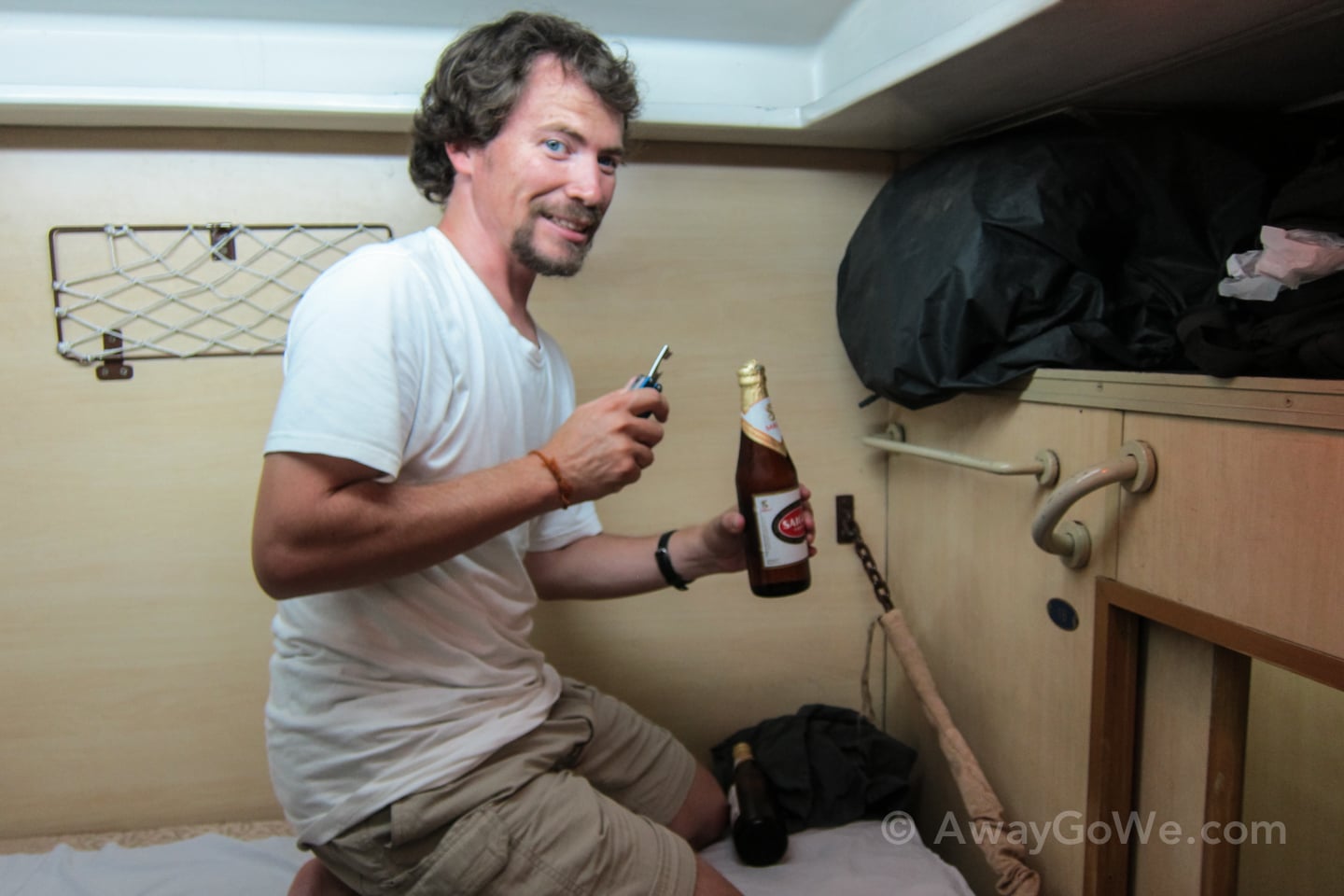 The cabins were comfortable and well-appointed, if a bit dated. The train left Saigon station at 7pm and arrived in Da Nang at noon the next day. It was a decent night’s sleep, but the tracks in Vietnam don’t seem to be as well maintained as many parts of China, India, and Thailand, and there’s a lot of sway and rattle.

If we weren’t so keen on overlanding, and such a big fan of trains, we probably would have opted for a flight, which costs about the same. And, in fact, we did opt to go that route on our onward journey from Da Nang to Hanoi, as plane tickets were less than the train (~US$40 each on Jetstar), even booking the tickets just days in advance at an agent in Hoi An. 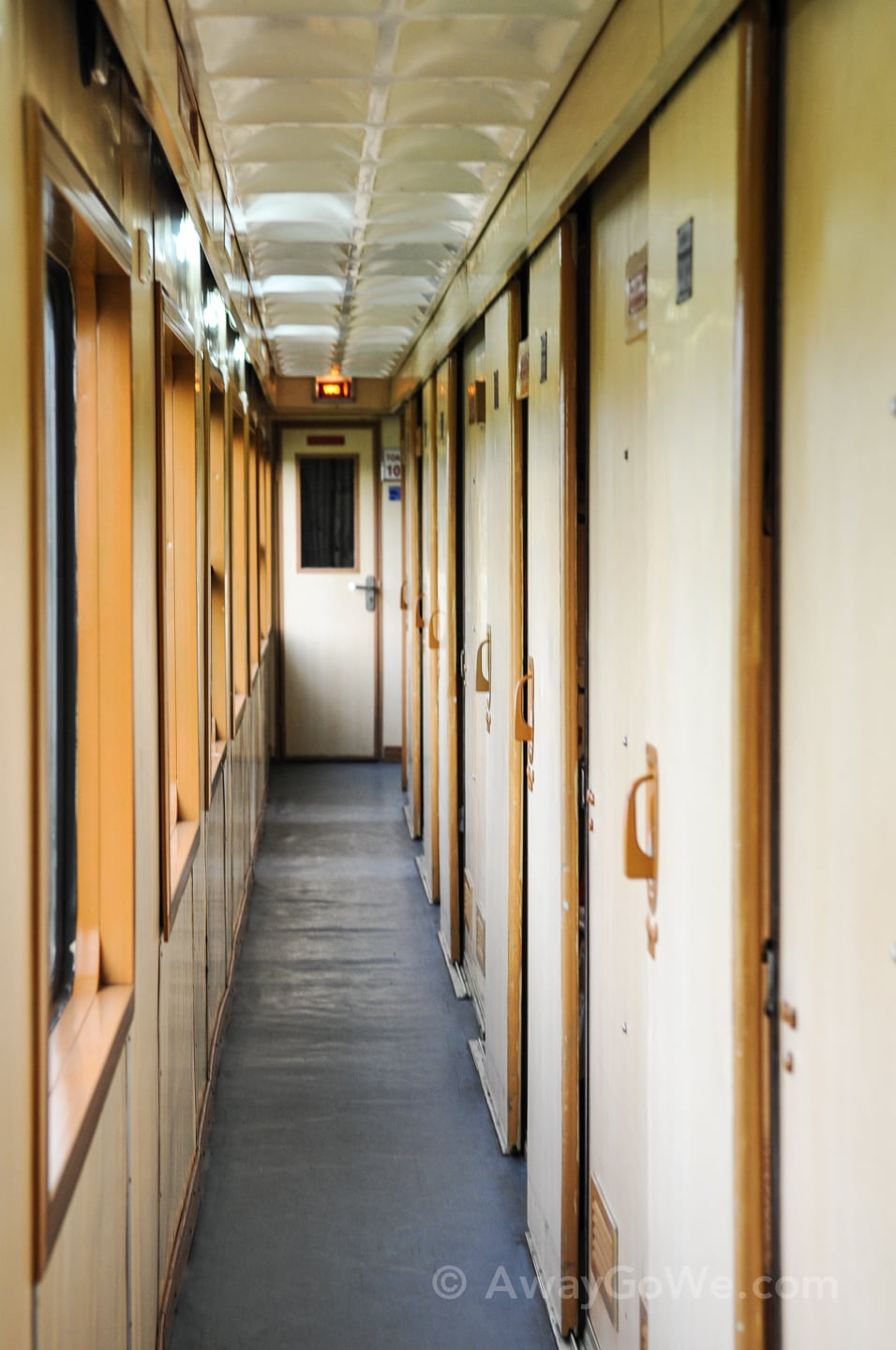 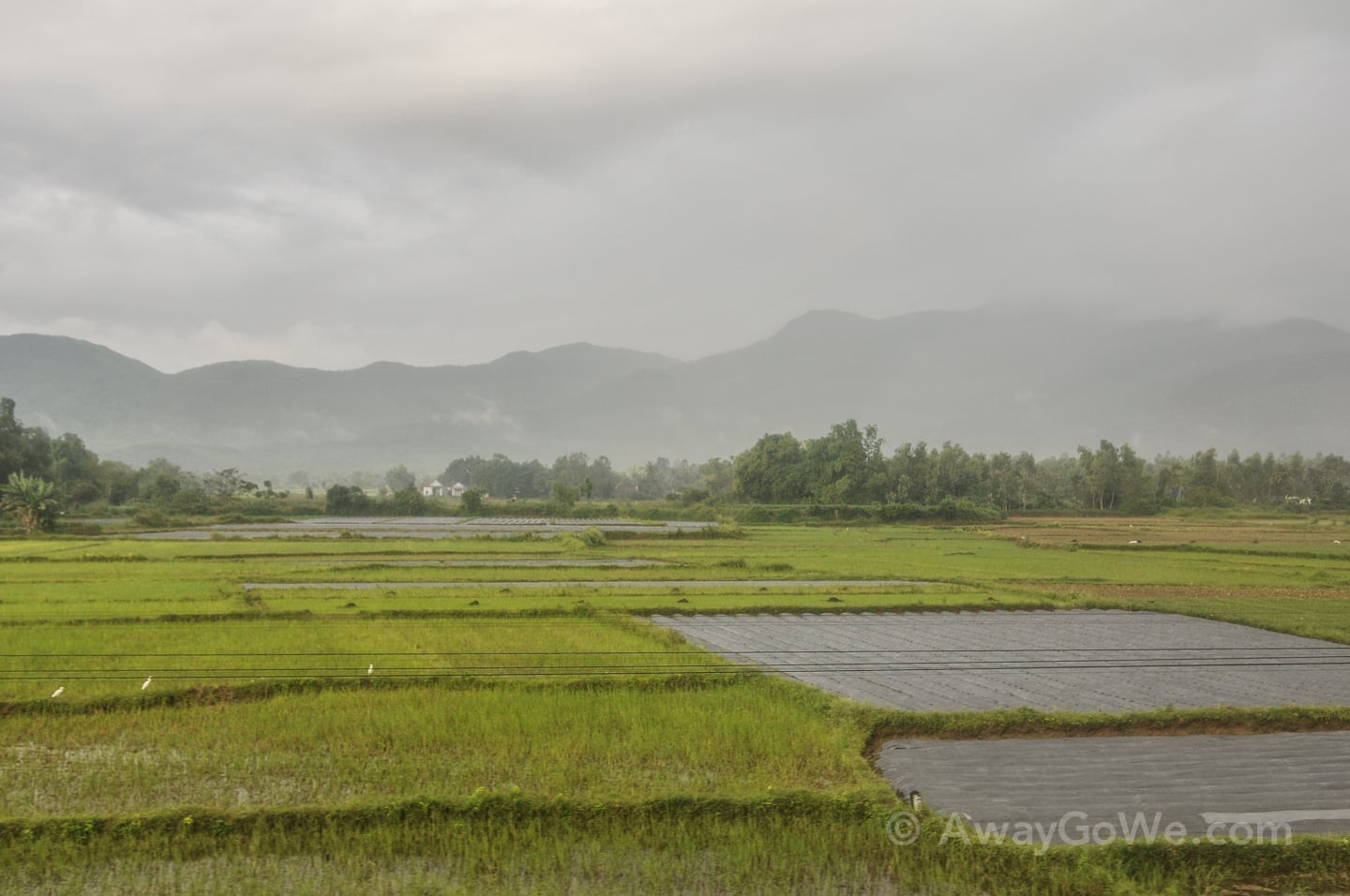 One of my favorite things about our time in Asia was mornings waking up on trains. There’s just something about slowly waking up to the rattle and hum of the sleeper car and watching the world wake up from your seat or berth. In India and Southeast Asia, there’s the ever-present coffee/tea attendant. India’s got the Chaiwalla (I call “Chai Guy”). Vietnam’s got the Vietnamese Coffee dude. 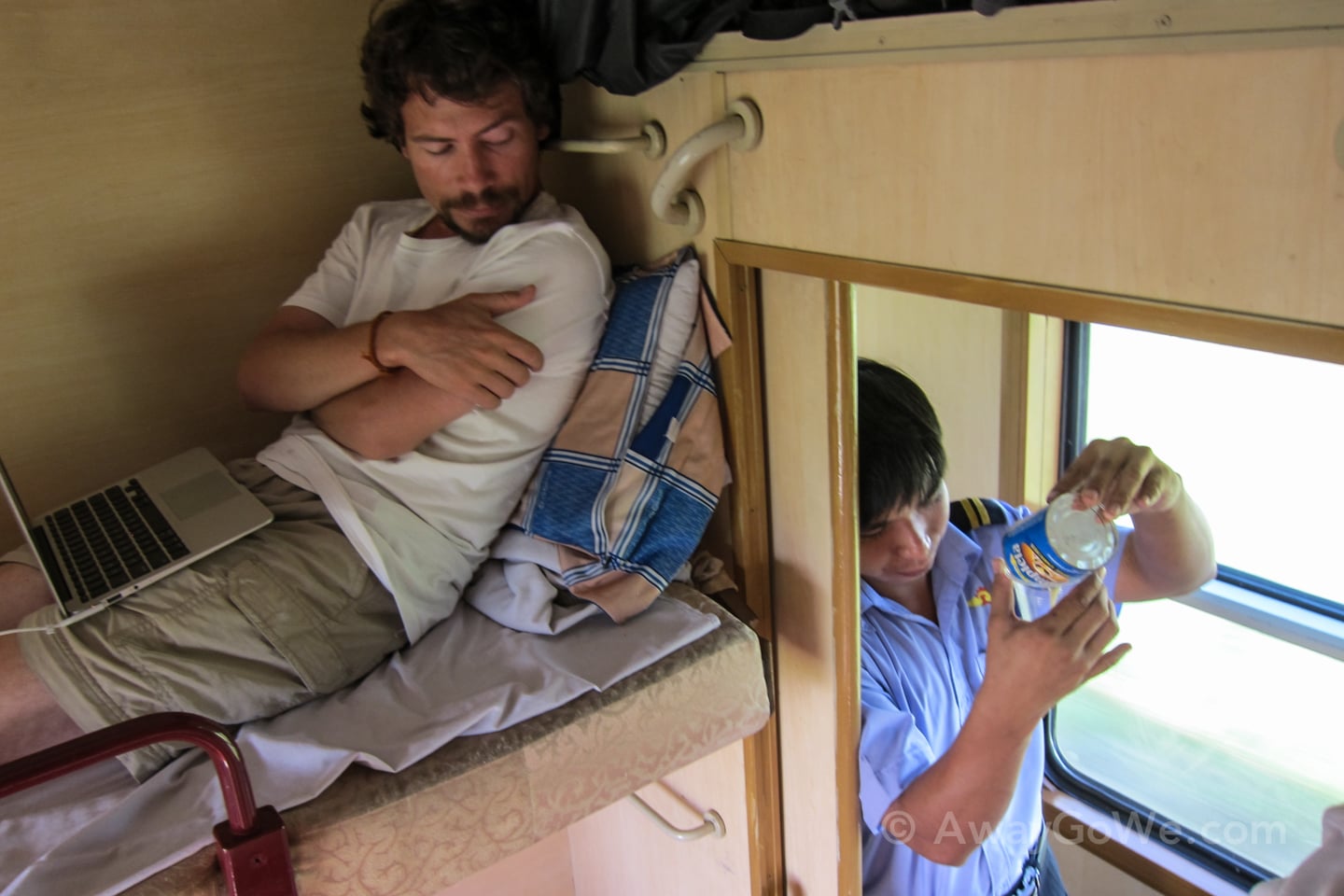 It’s fun to watch these guys. So much precision, not a drop of sweetened condensed milk spilled or smudged on the plastic cup, even rocking back and forth at 70mph with hot coffee in the mix as well. And talk about delicious! 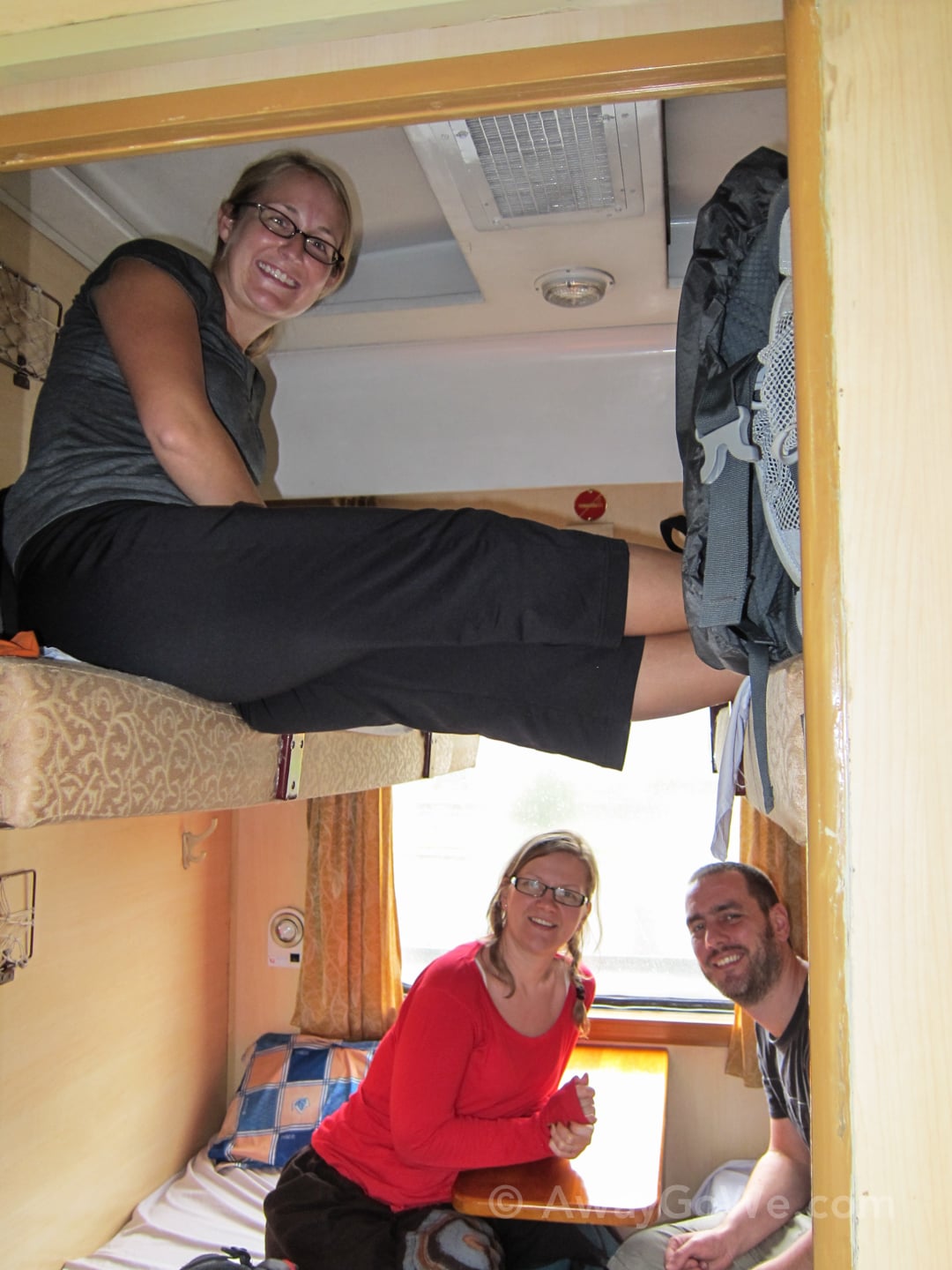 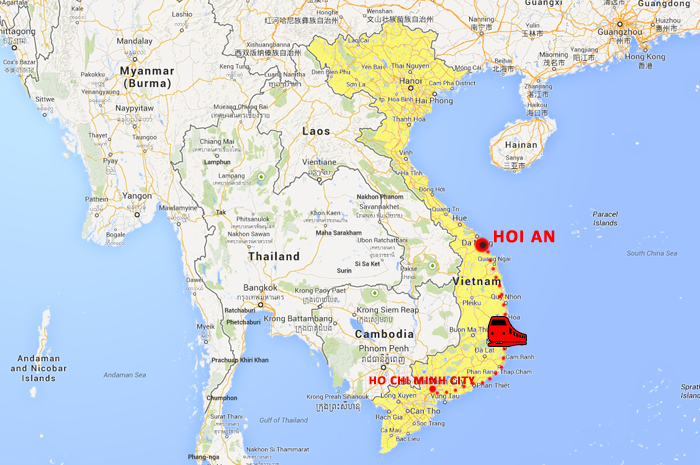 I guess we should get to Hoi An now. Hoi An is an ancient city located in Central Vietnam, just south of Da Nang. The old town is a UNESCO World Heritage Site (we do love our UNESCO sites), and a very well-preserved one at that, with many of the structures dating back to the 15th century.

Hoi An has long been an important center of shipping and trade, and was the largest and most important port in Southeast Asia in the 1st century AD. 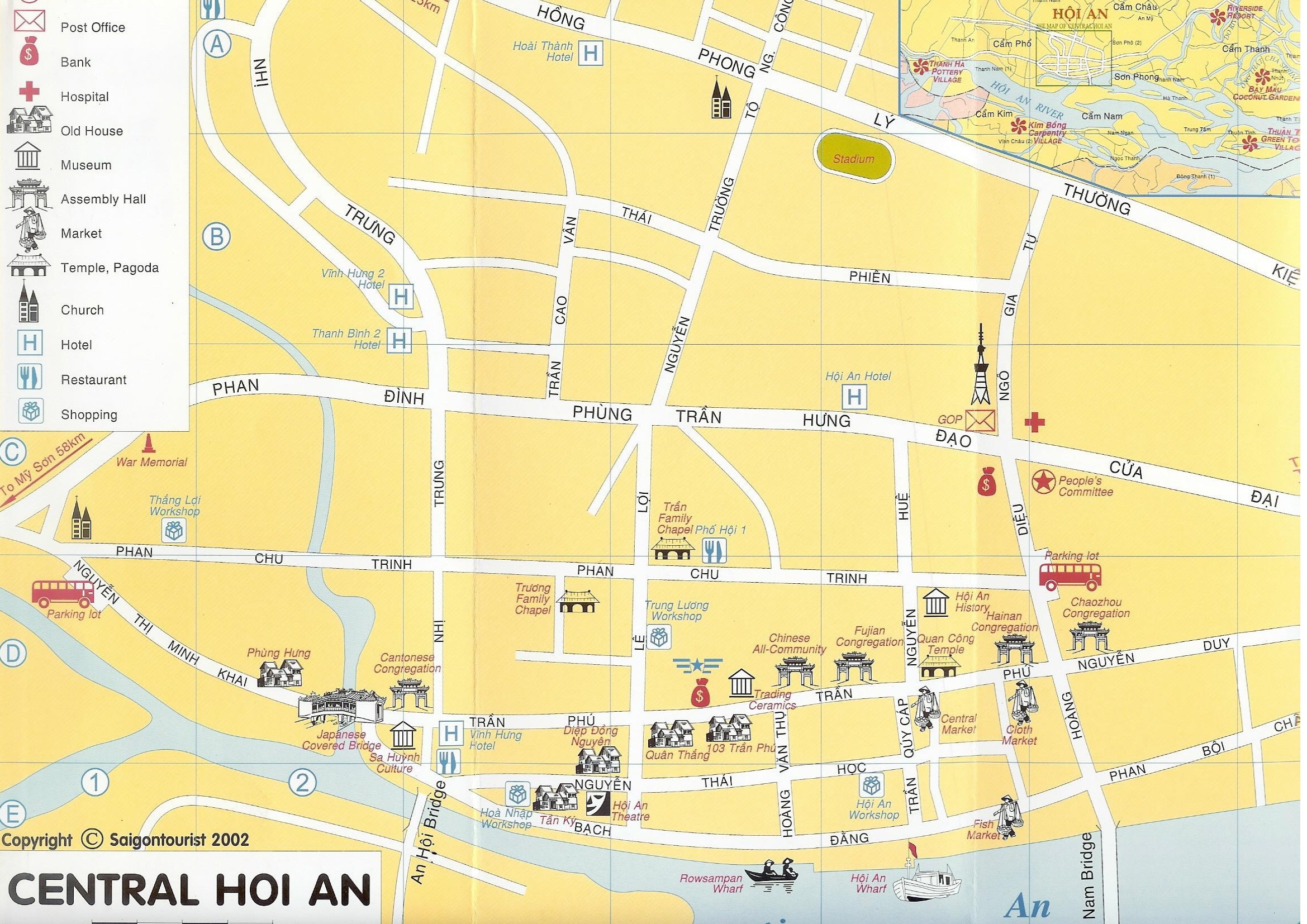 The old town is very charming with a number of temples, bridges and other historical sites worth seeing. It’s also full of great restaurants and a range of accommodation.

We stayed in Hoi Pho Hotel, which was not perfect by any stretch, but served our purposes for US$14 a night. The hotel was a bit up from the main drag, but not too far (5-10 minute walk). The main issues we had were related to moisture. It was late November and Hoi An was in the grip of the rainy season. Moisture was everywhere and nothing dried out. Our room was a bit dank, and the laundry we had done came back smelling musty. I’m not sure there’s a lot that can be done about either issue when it continuously rains as much as it had up to our arrival and regularly throughout our stay.

Luckily, Hoi An is a perfectly pleasant town to stroll around in rain or shine, and unless you’re venturing outside of the UNESCO core area (which we did on the second day, which happened to be dry and pleasant), it’s not really an issue. 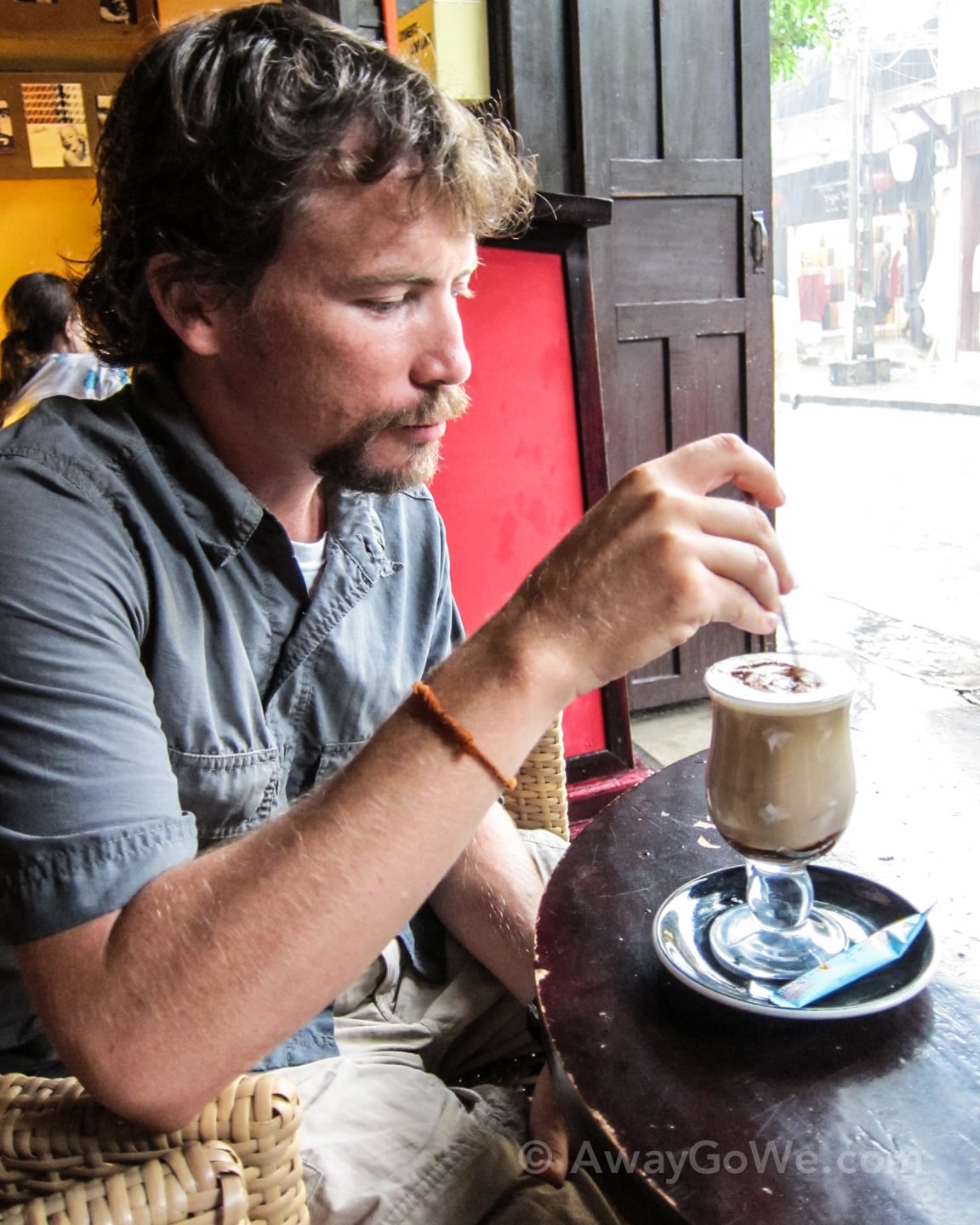 Warming up with a foofy coffee and watching the rain come down at one of Hoi An’s excellent cafes. 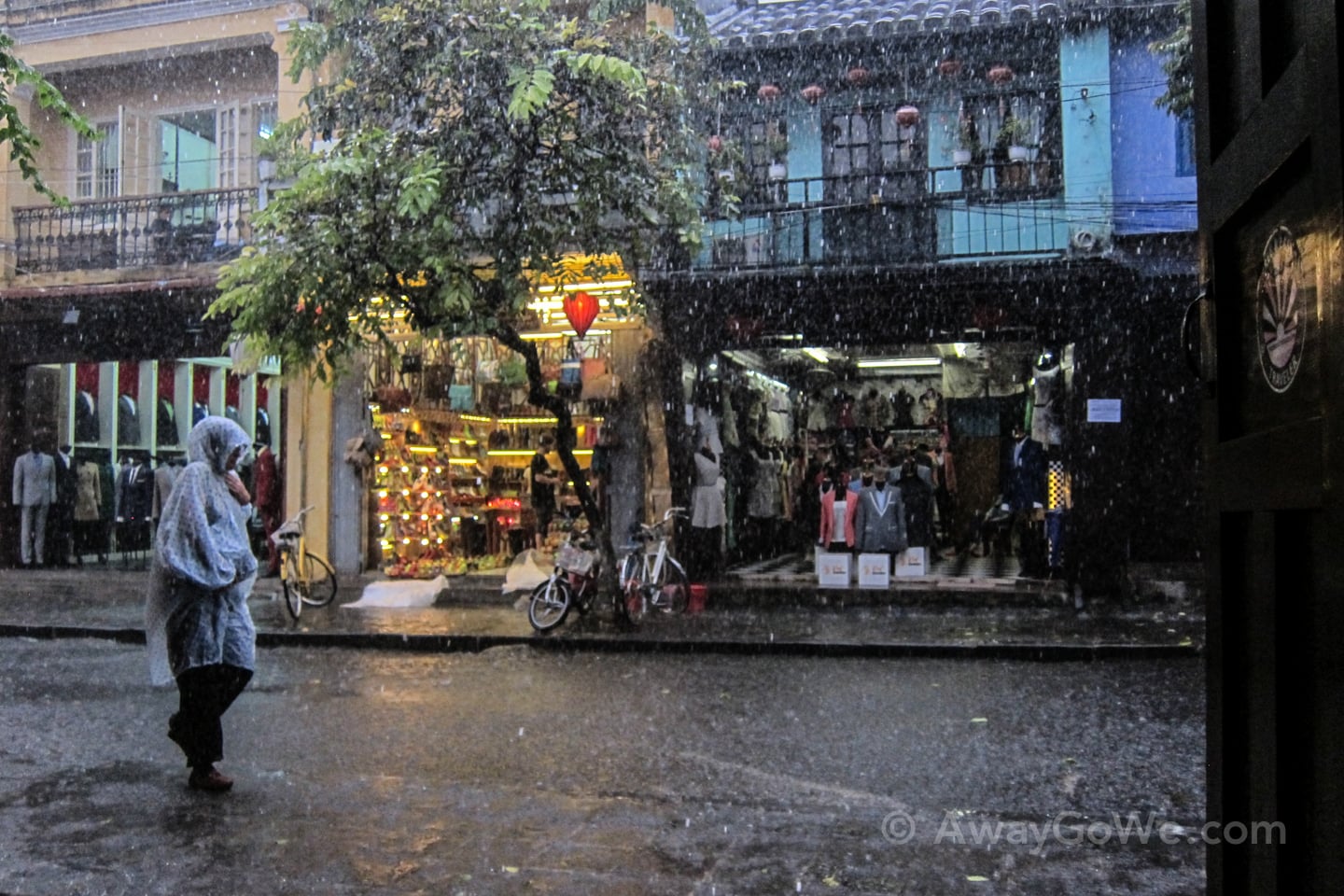 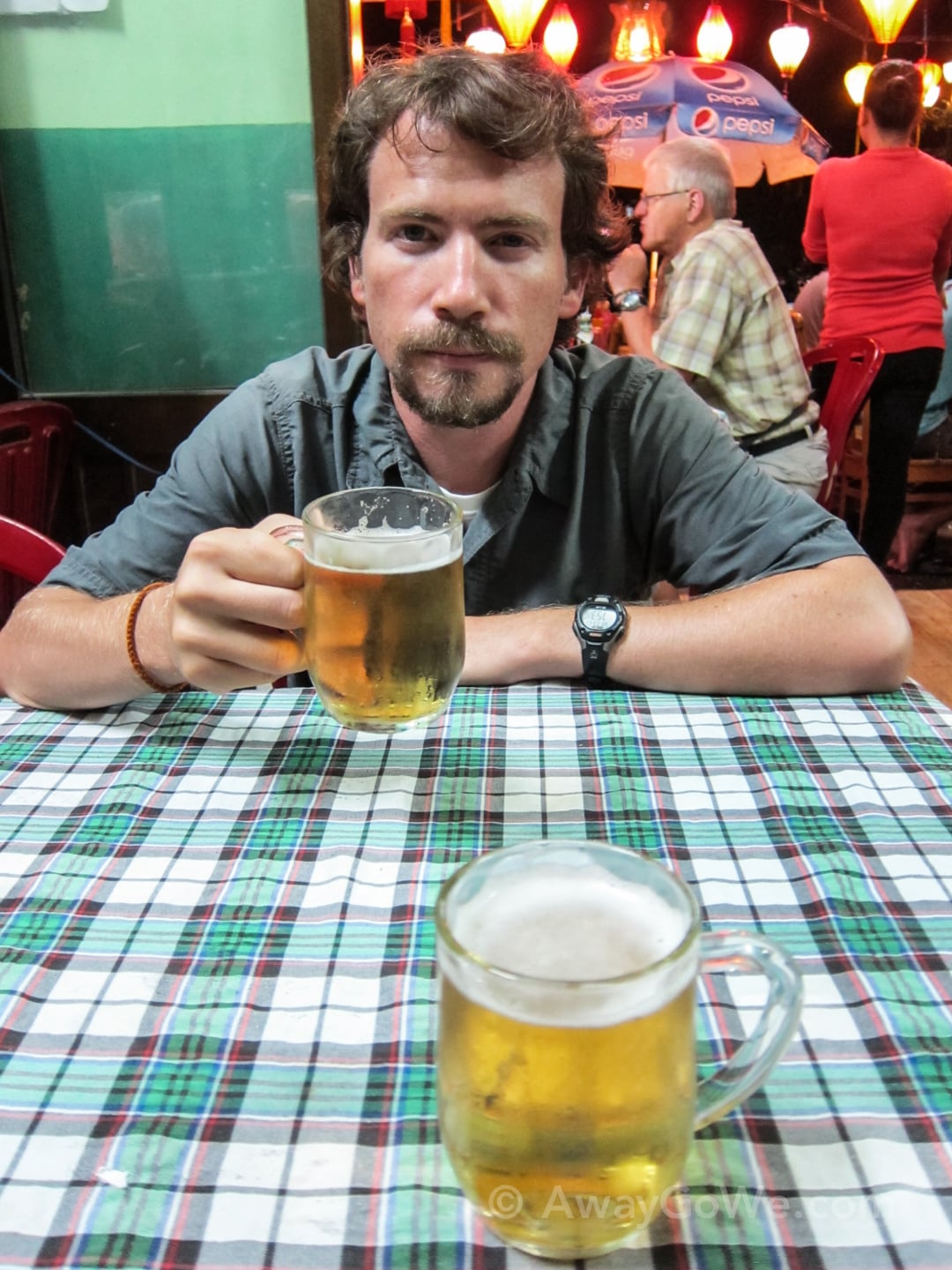 In addition to Vietnamese coffee and hot tea, Bia Hơi (“gas beer”) is also a favorite (and cheap!) beverage of the locals. Bia Hơi is brewed daily and distributed in plastic jugs to small bars or street corner vendors. It’s typically a low-ABV (3%) lager served iced cold and costing pennies. This Bia Hơi cost about 25 cents each. 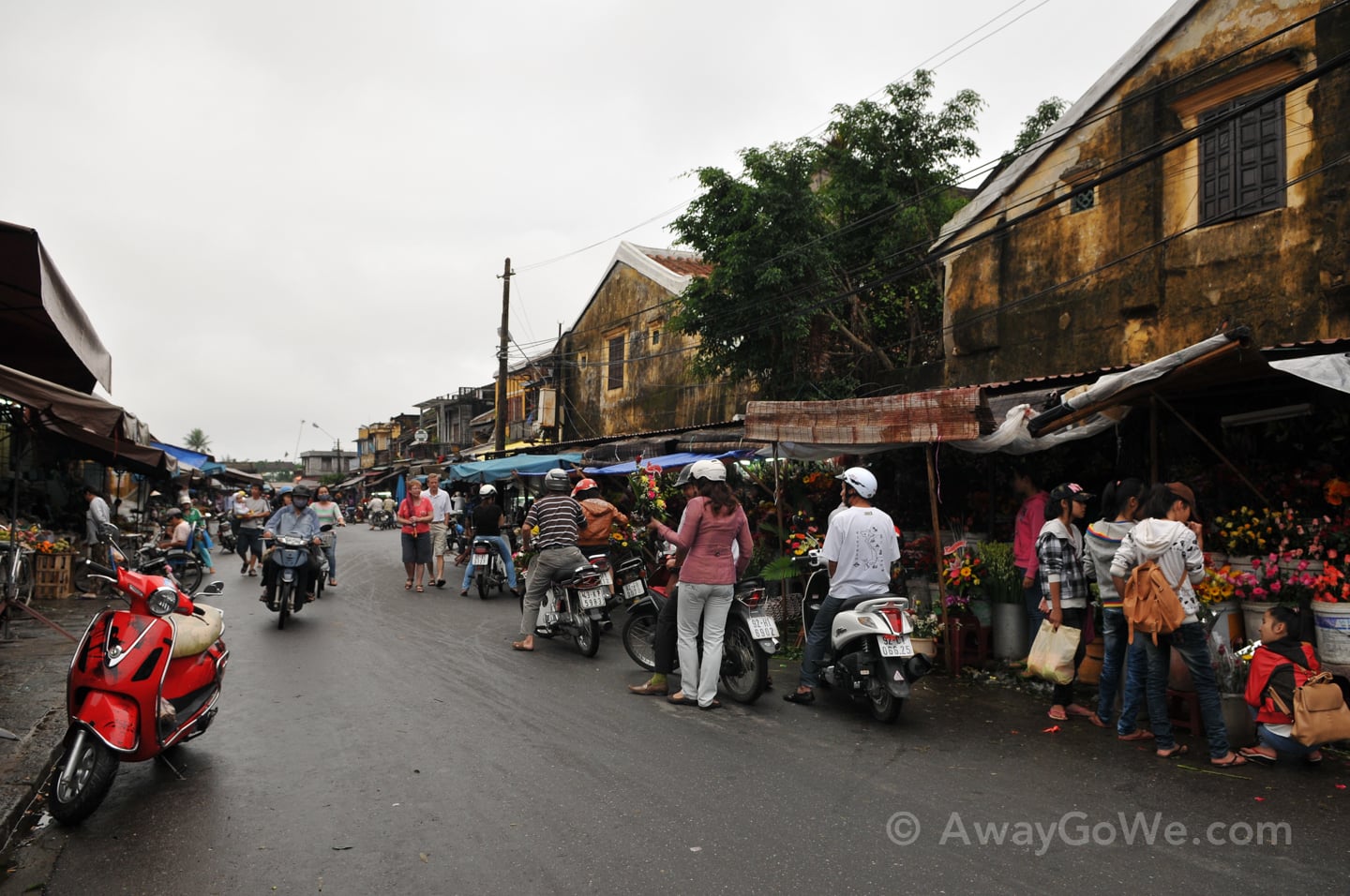 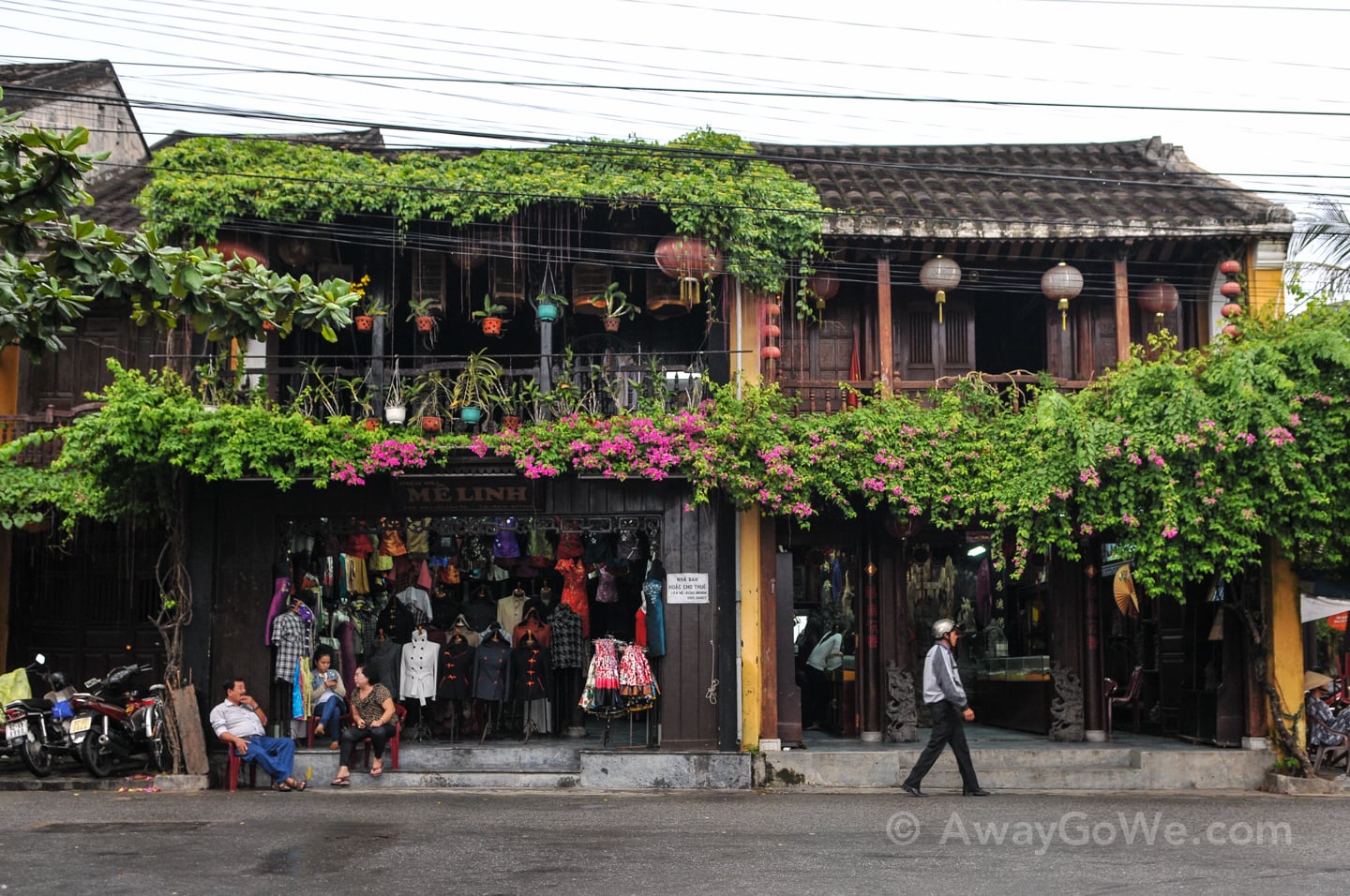 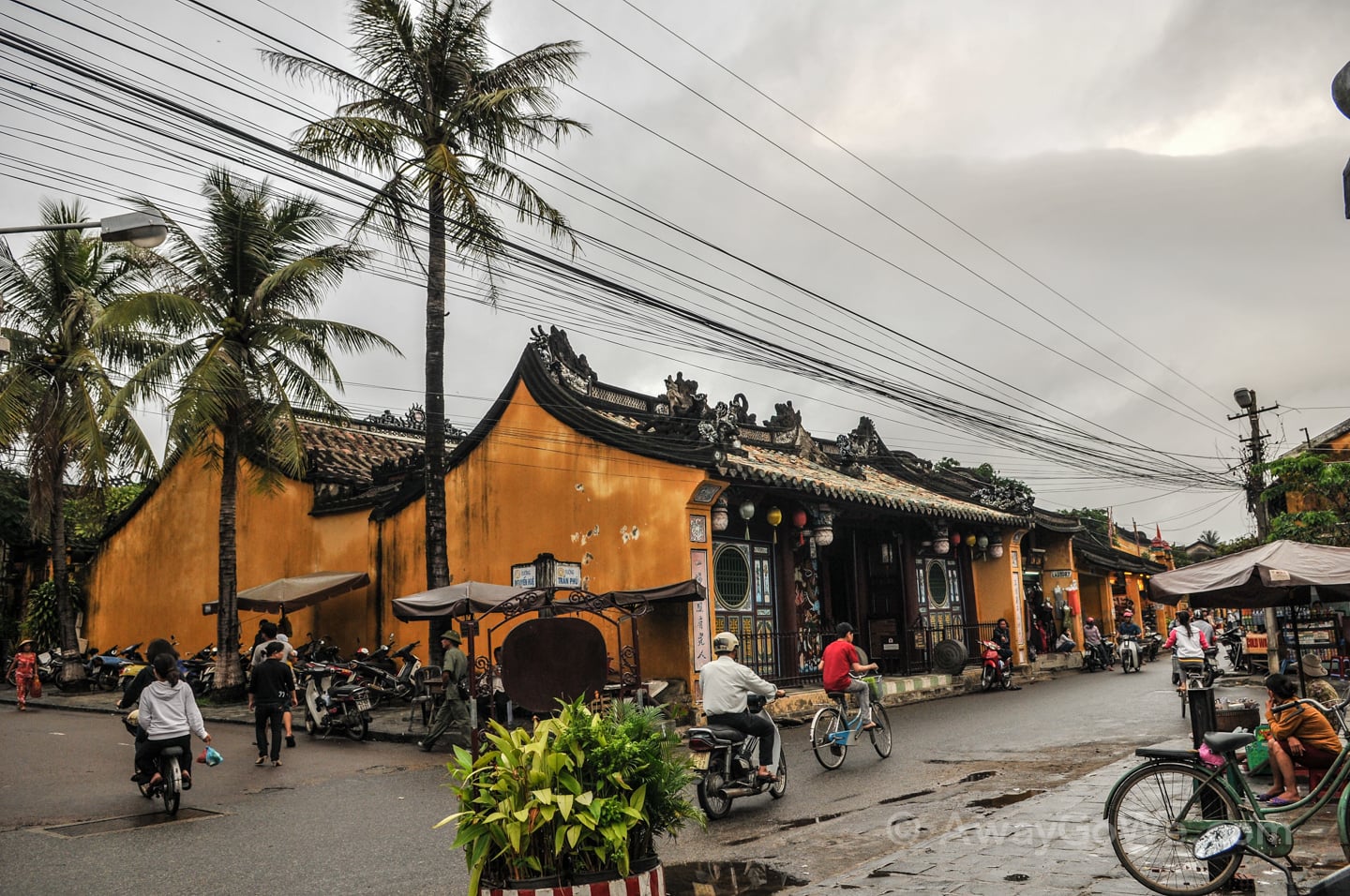 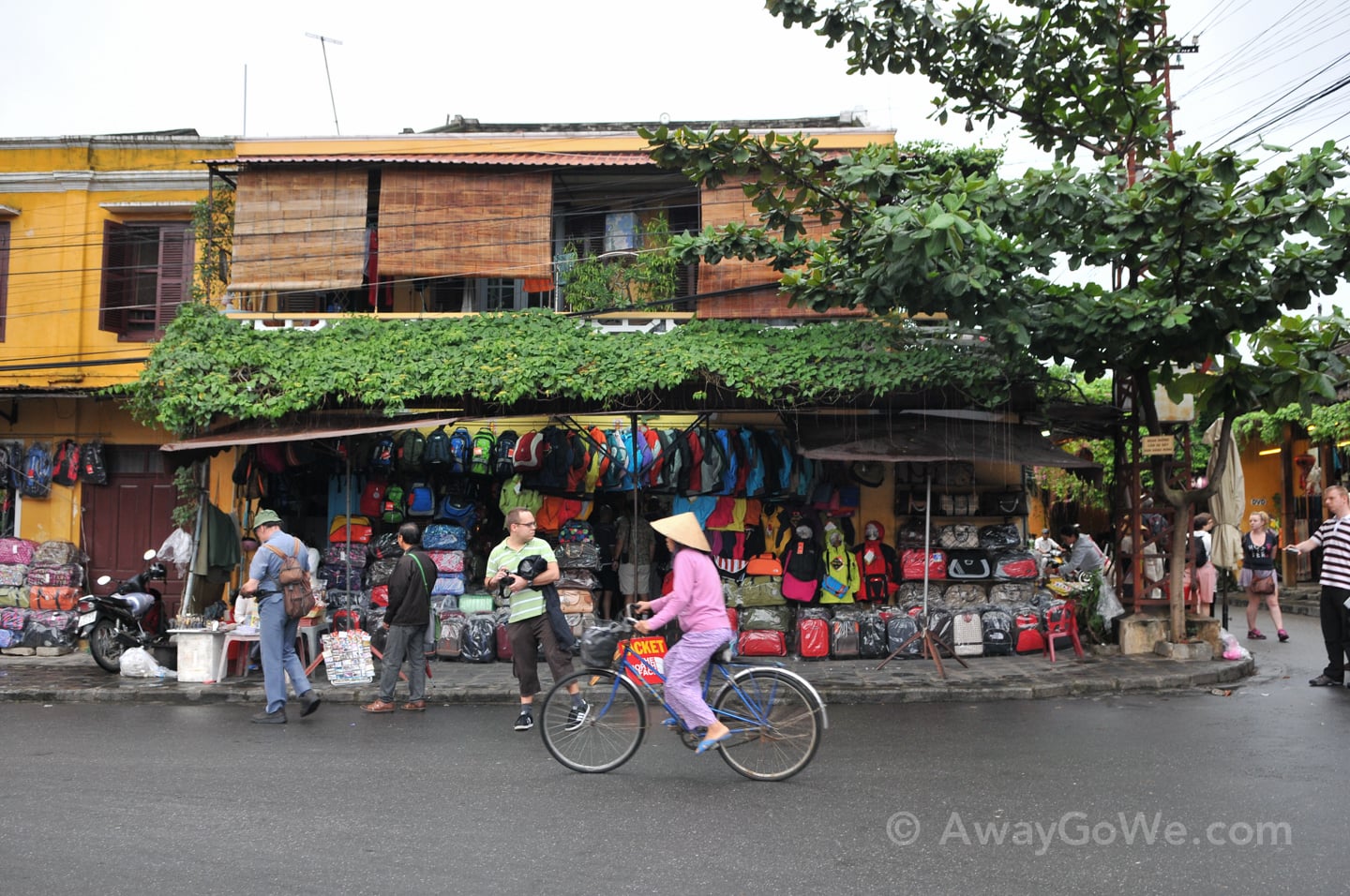 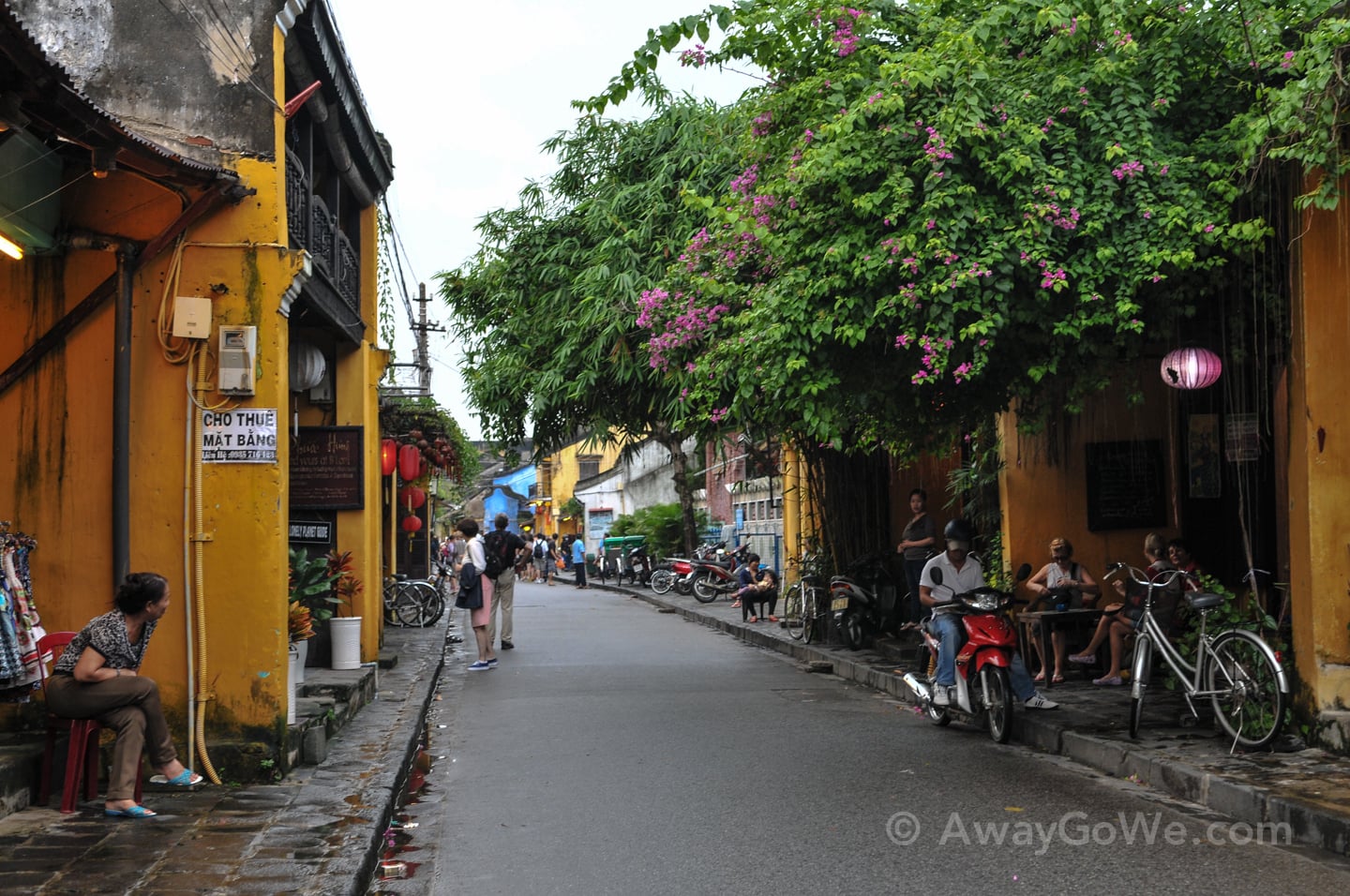 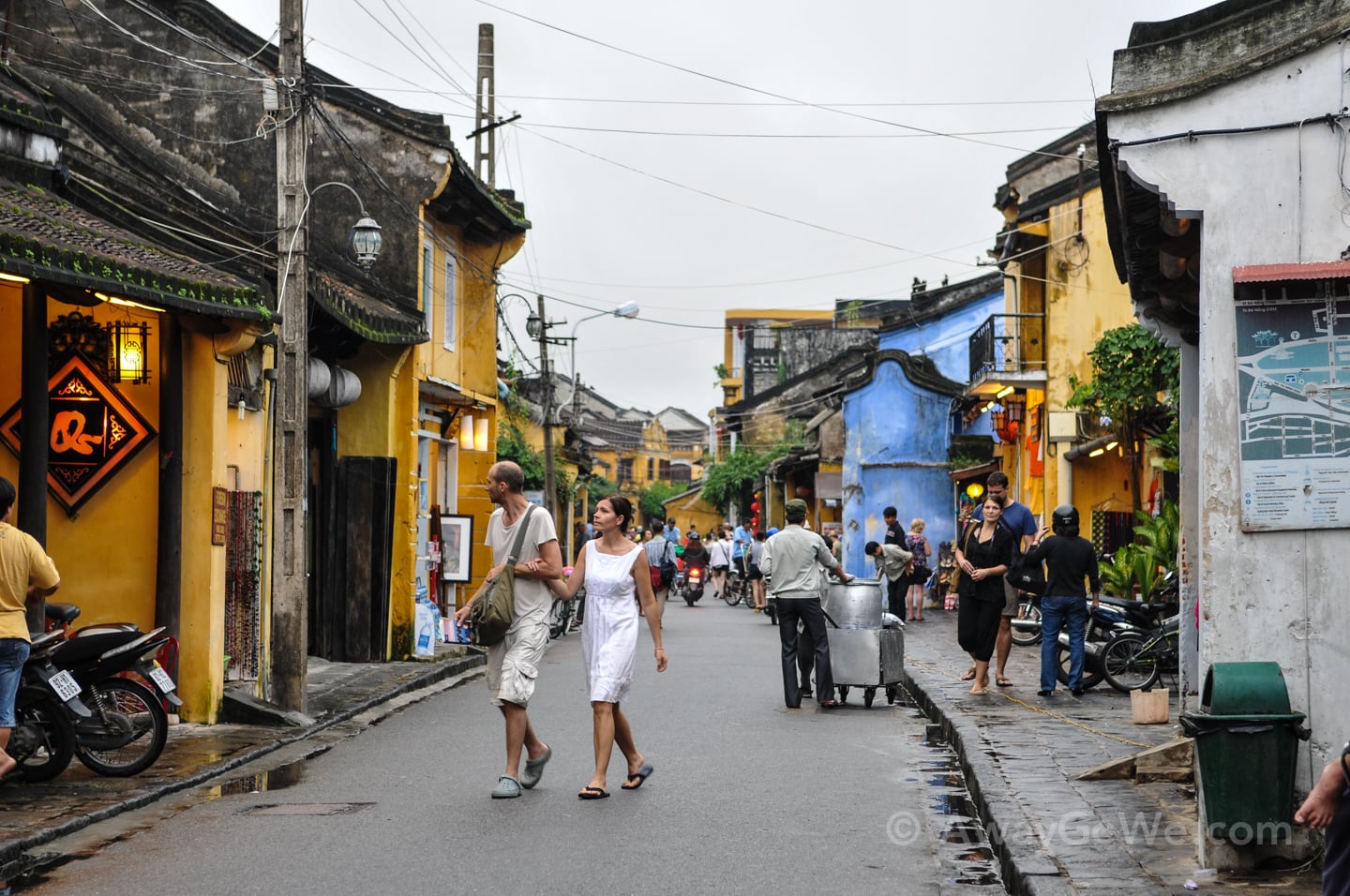 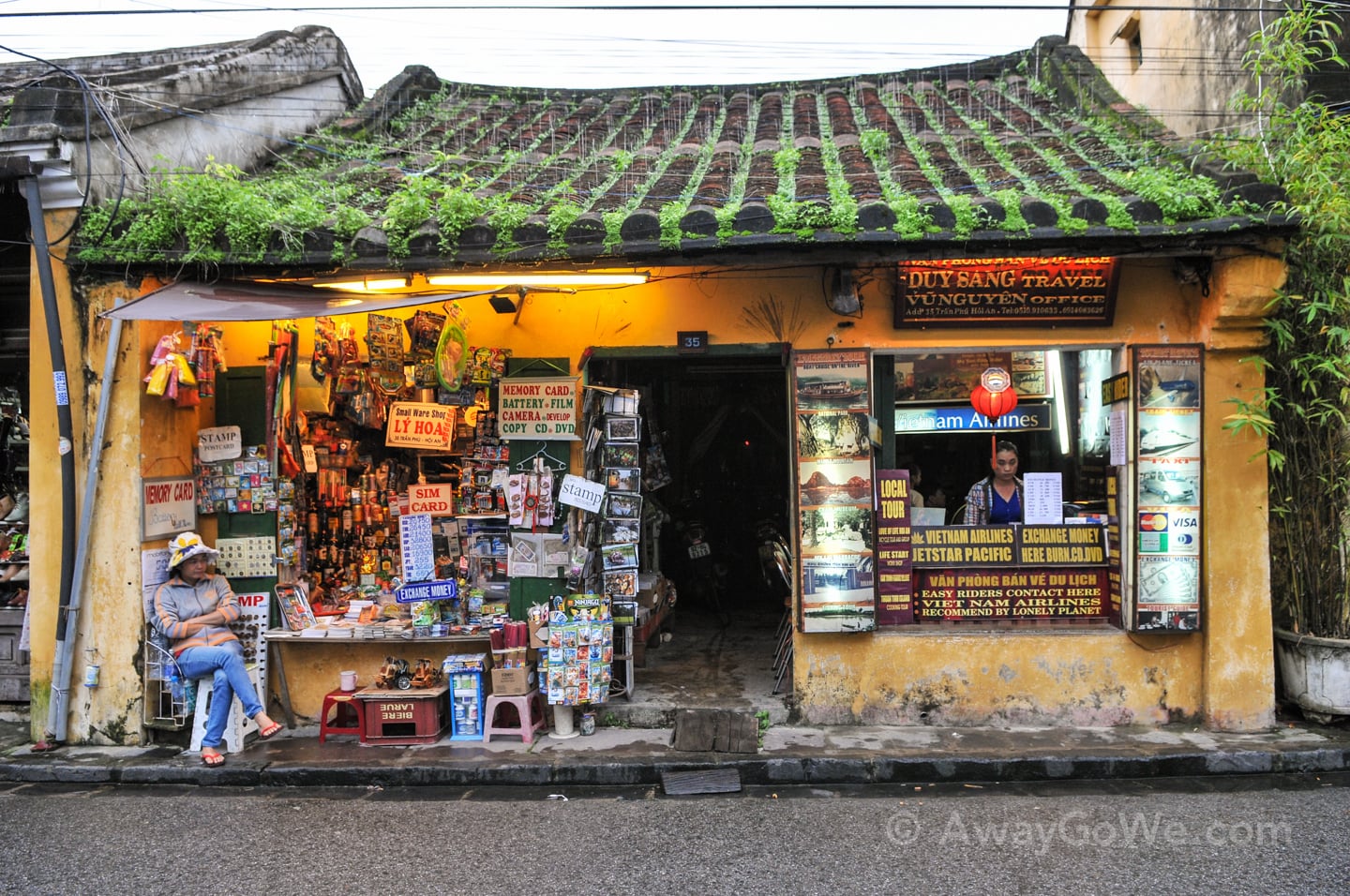 You may notice that signs in Vietnam employ Western (Romanized) letters, rather than the typical stylized characters (such as Chinese) used throughout Eastern Asia. The land area which now constitutes modern Vietnam used character-based writing up until the 17th century, when the Vietnamese Alphabet was codified by French missionaries into what we see today.

This writing style sets Vietnam apart from nearby countries such as China, Cambodia, Laos and Thailand, which all use some non-Romanized stylized character set.

One big advantage of the practice for travelers to Vietnam is that it makes it a heck of a lot easier to get around. Even if you don’t understand a lick of Vietnamese, you can still make out street signs, Hotel names, and perhaps most importantly, the words “Bia Hơi”. 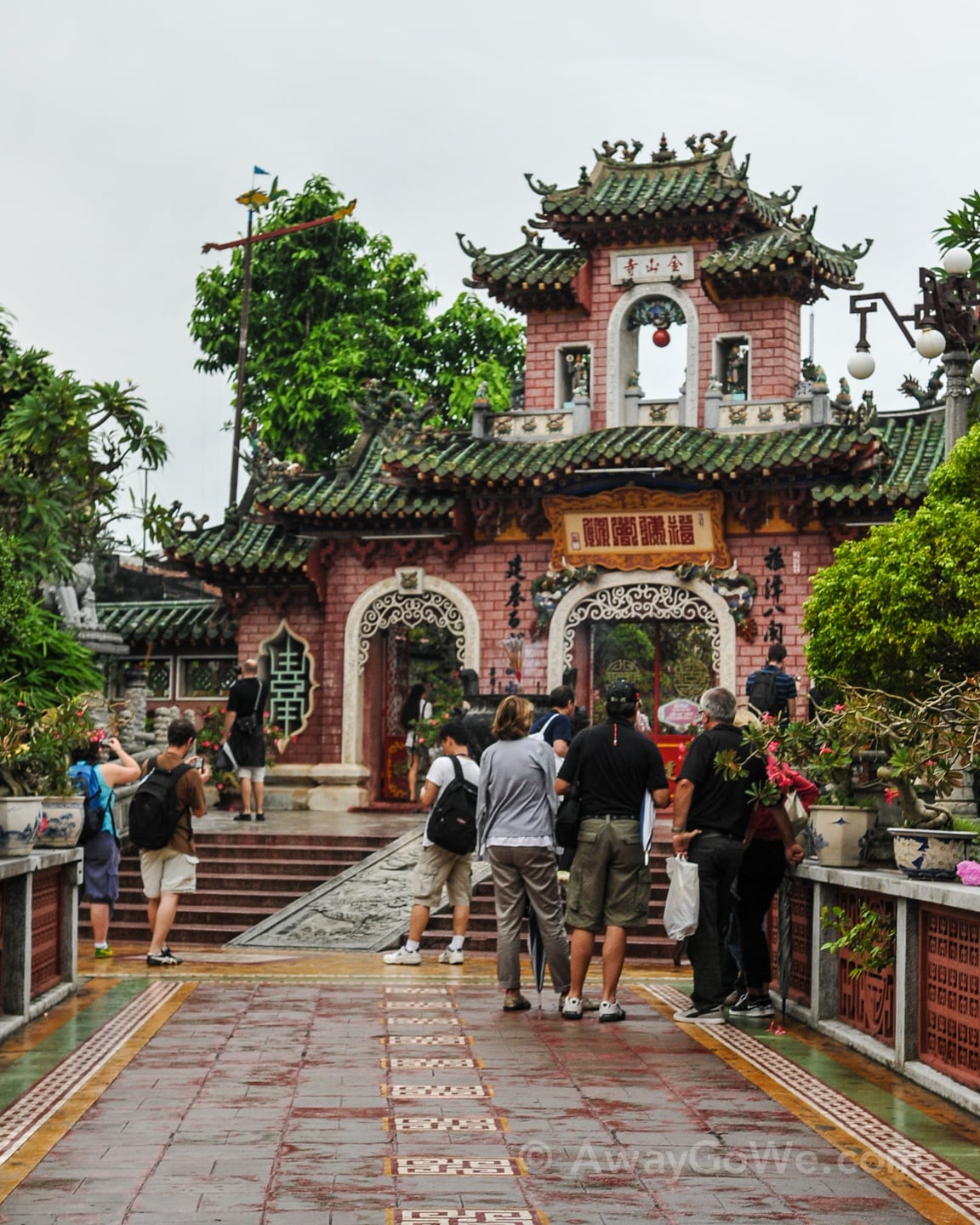 Fukian Assembly Hall (above), dating from the  late 17th century. 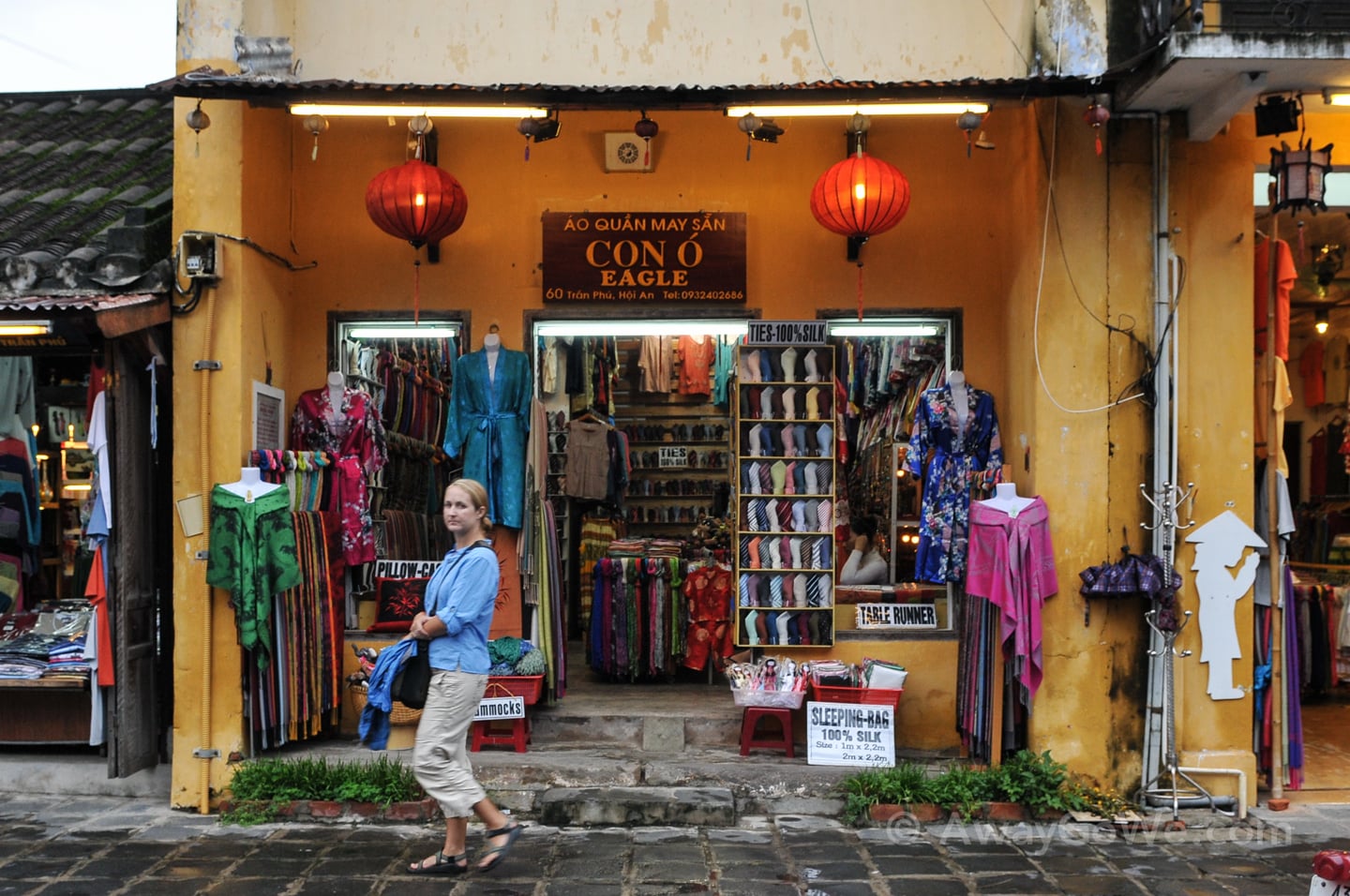 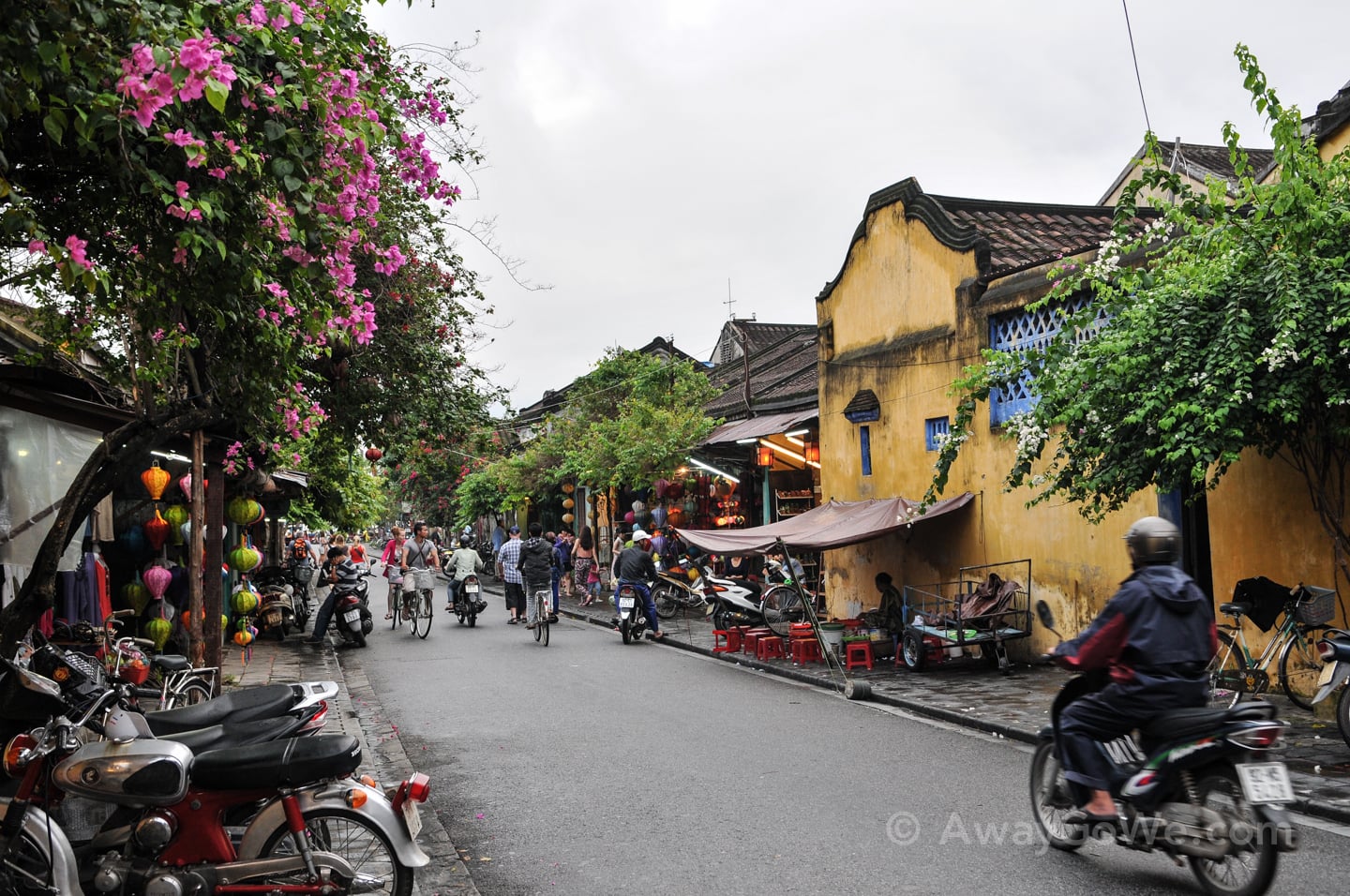 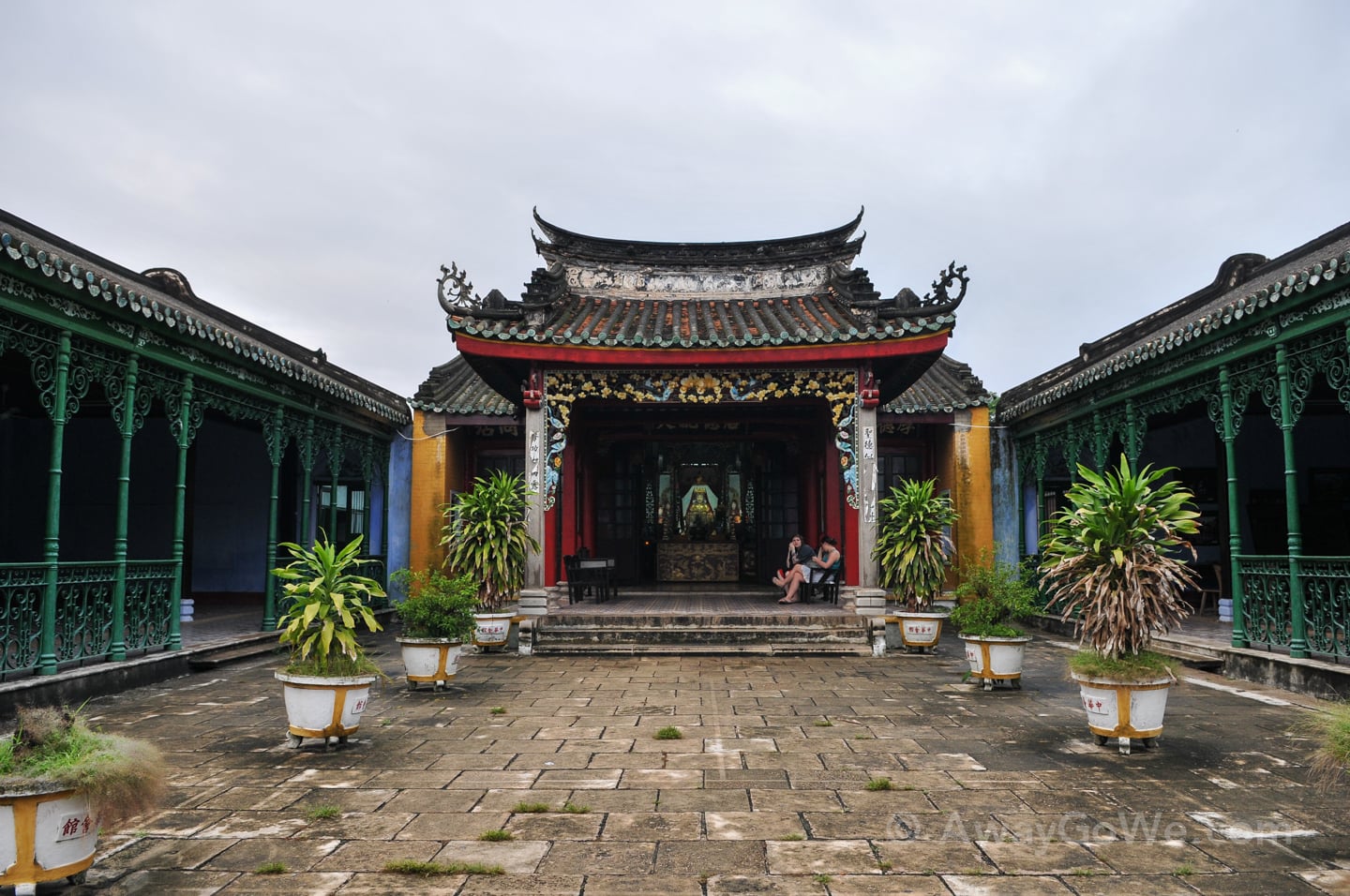 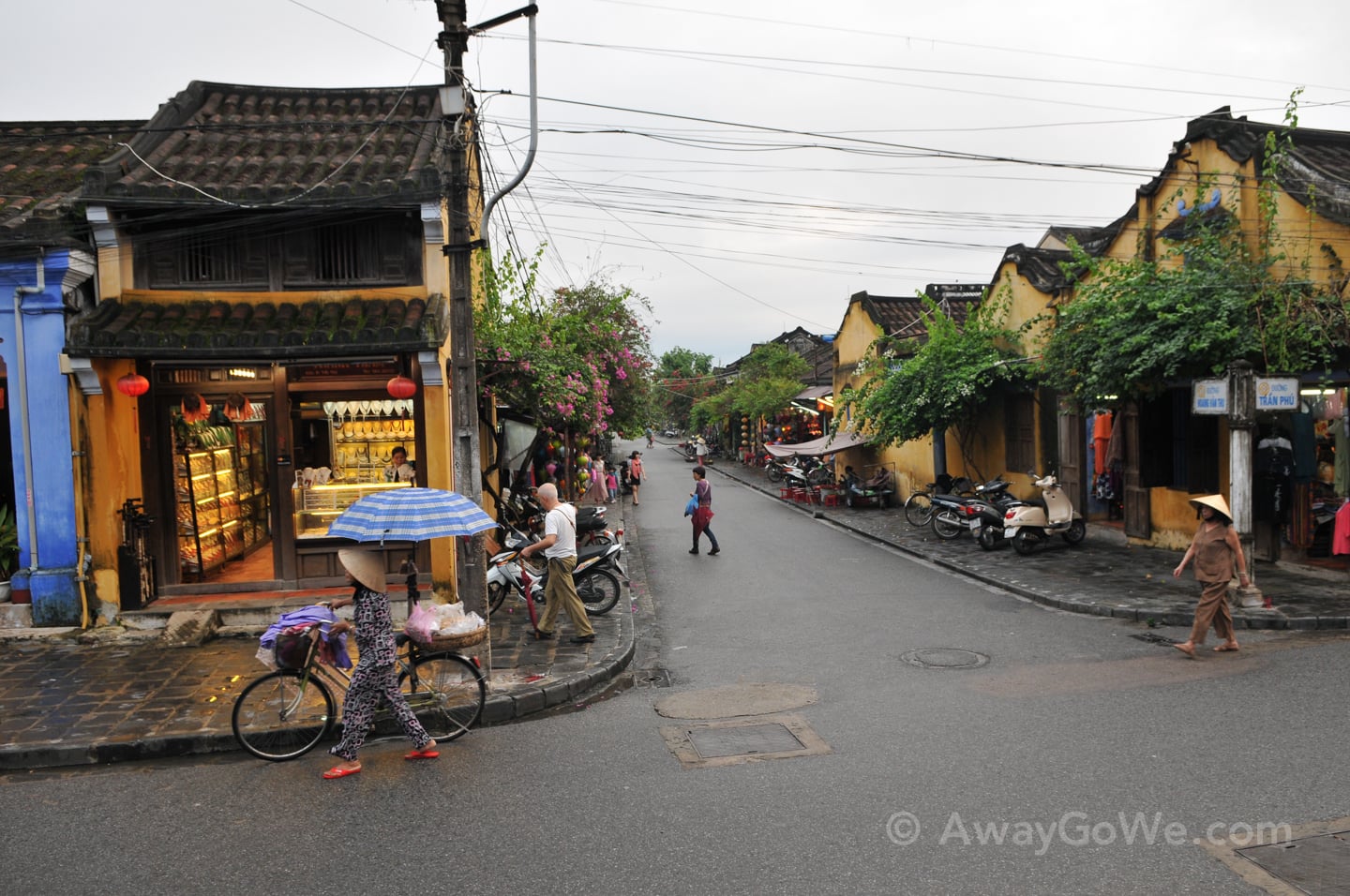 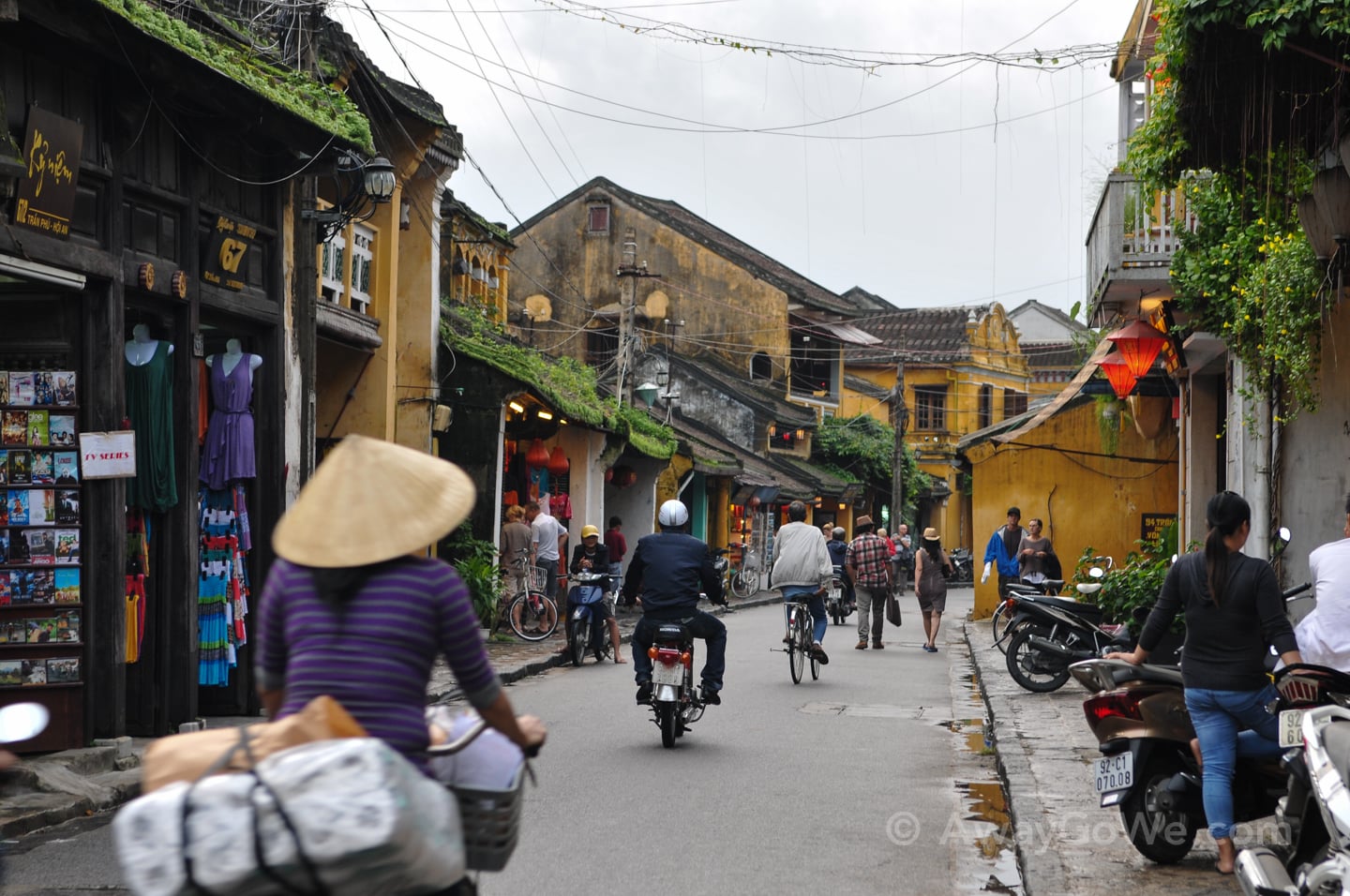 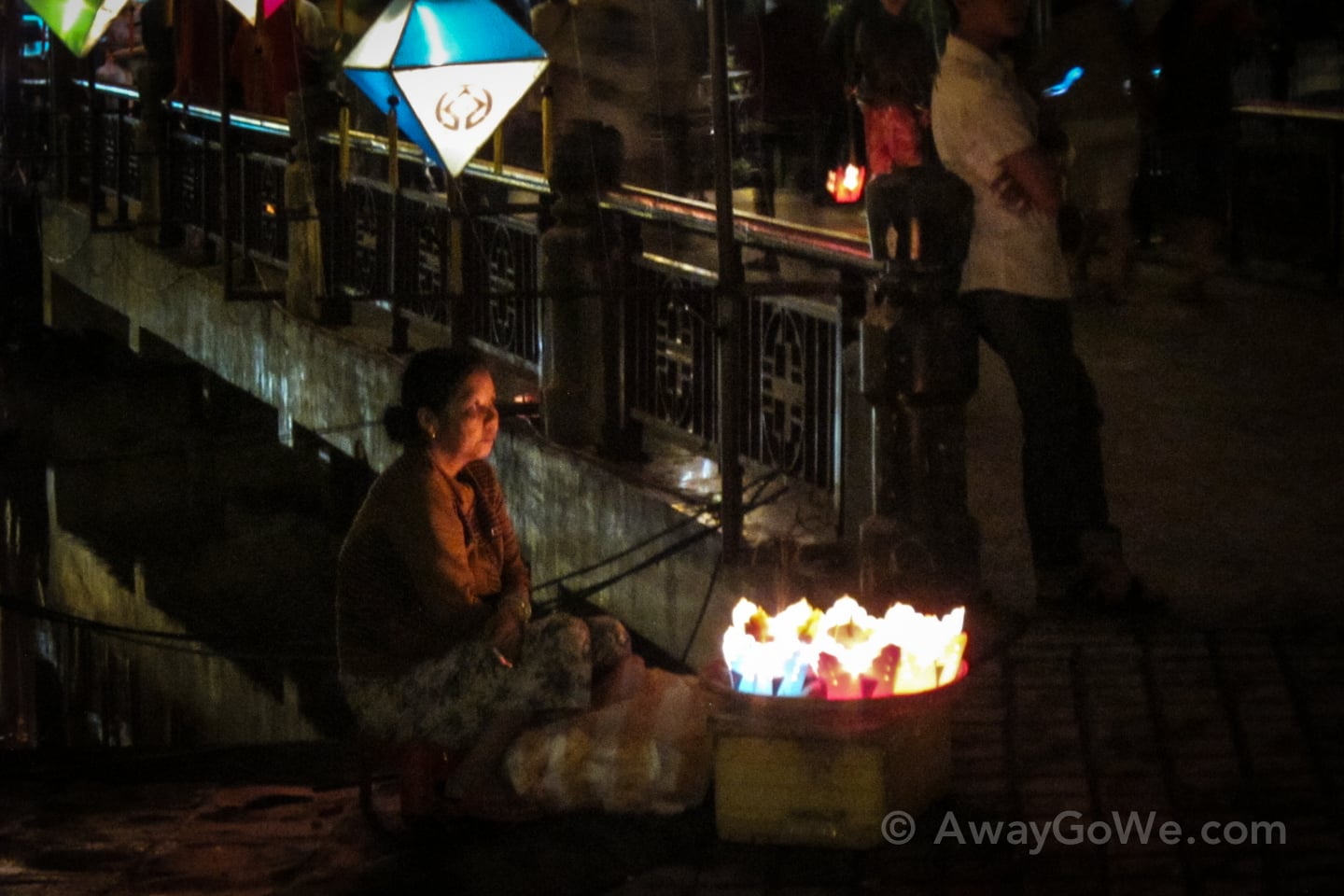 Night time in Hoi An is a magical time. The lovingly preserved old structures are awash in lantern and streetlamp light, and people are out enjoying their picturesque little town. 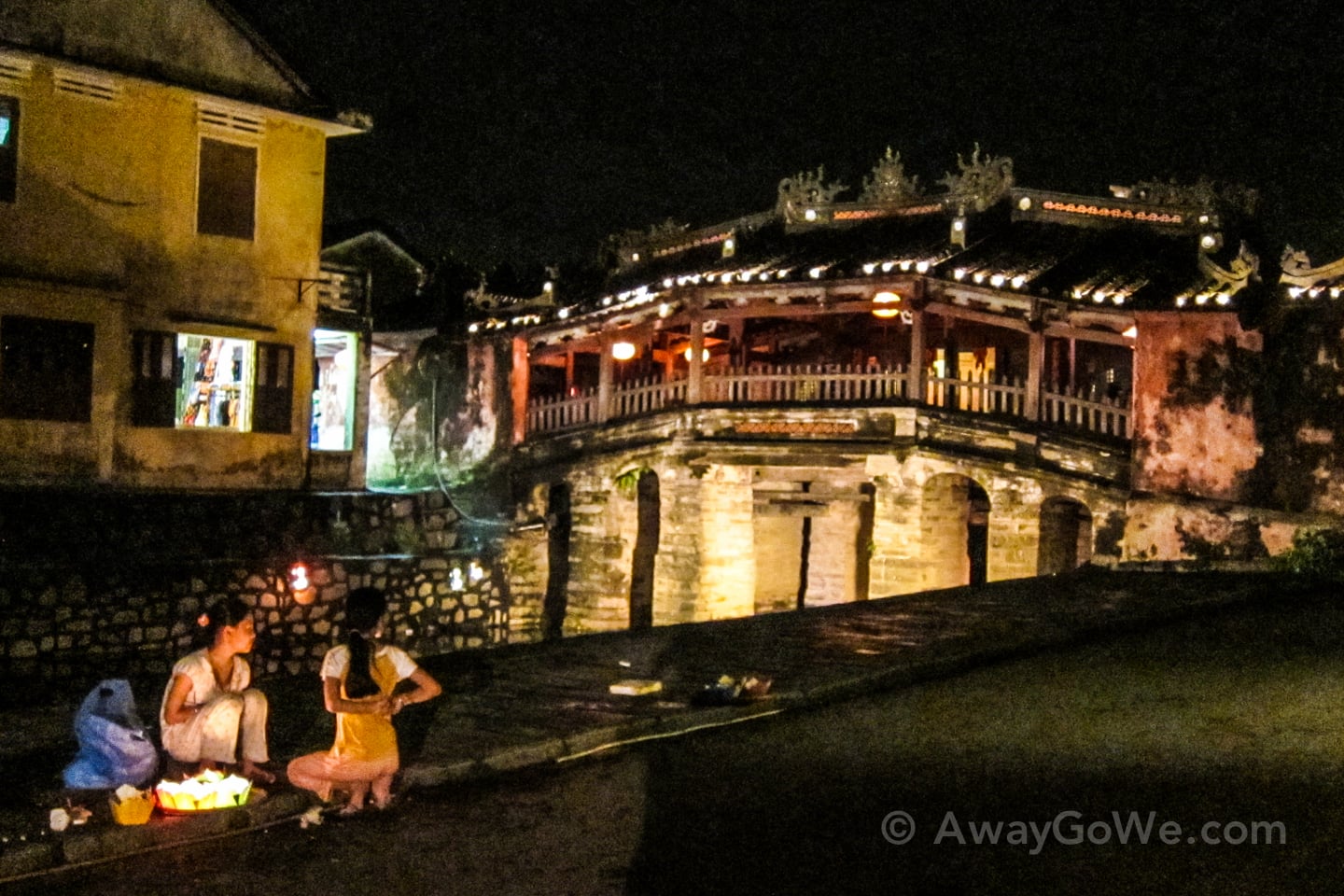 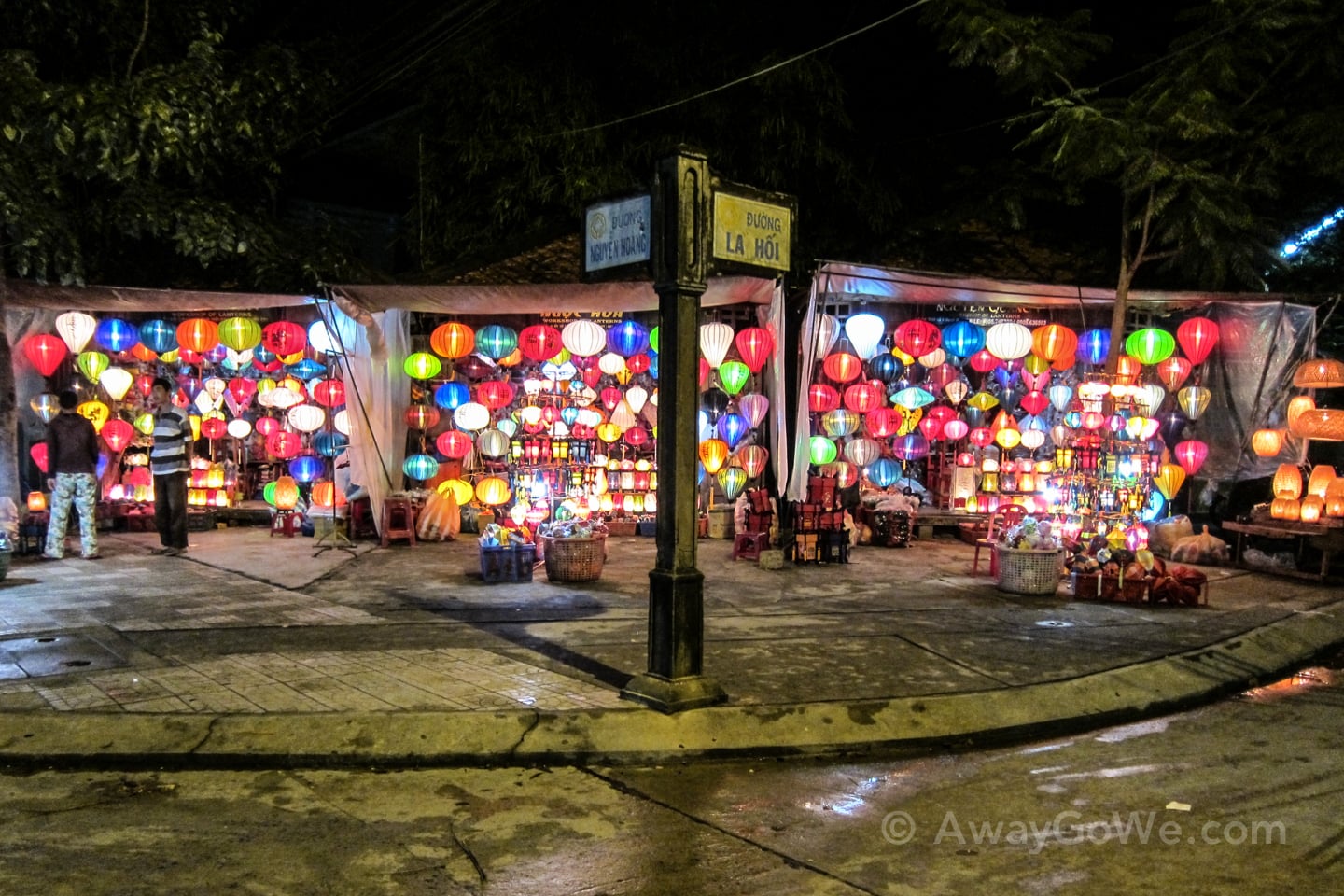 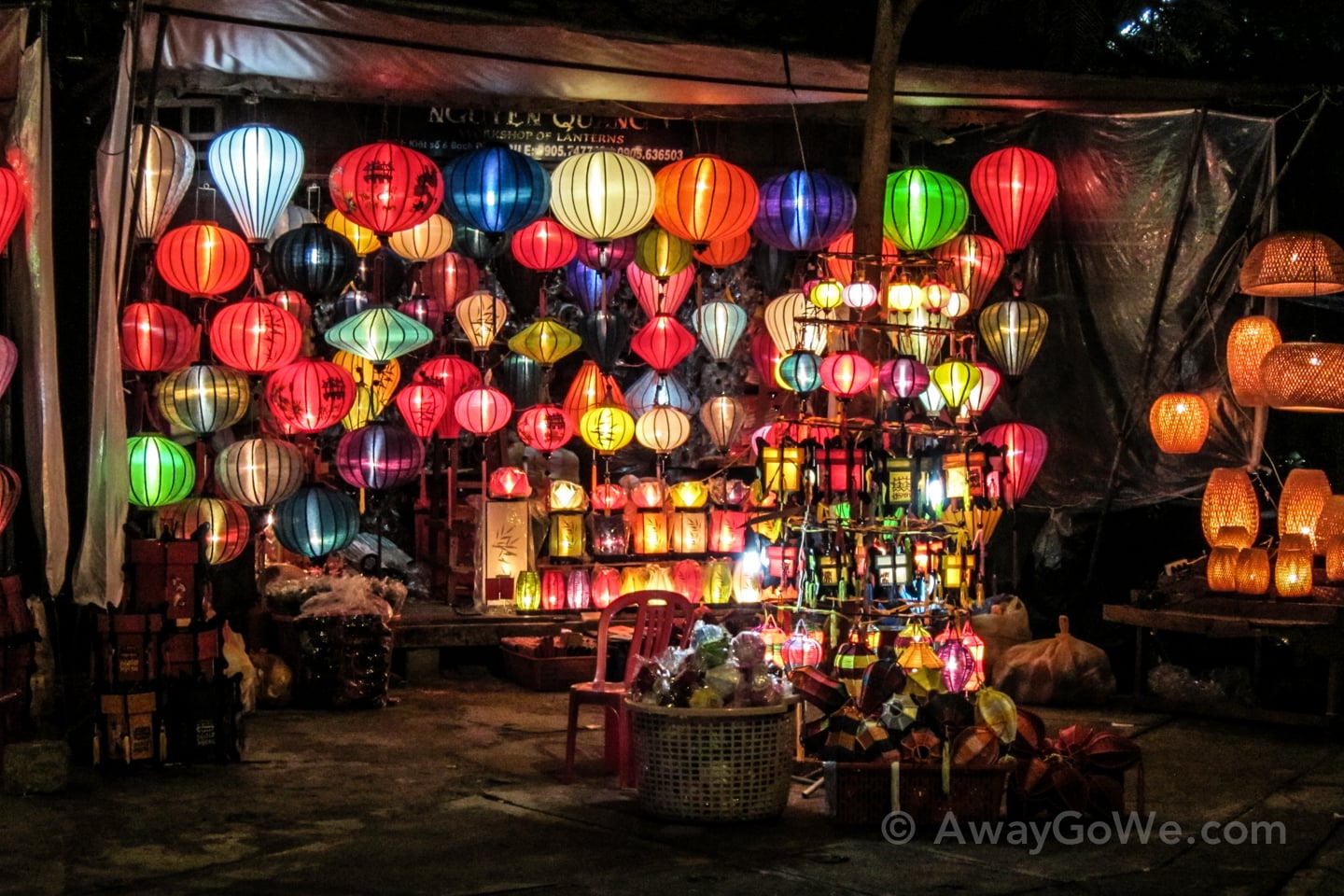 We discovered many wonders, great and small, in this Central Vietnam gem, but none that dominates my dreams and tugs at my heart more than Bun freakin’ Cha.

If you’re one of those people heading to Asia to reach Nirvana, head directly to Vietnam (Hanoi is the center of the Bun Cha universe) and waste no time finding a restaurant that serves this utterly mouthwatering feast for the soul. Take one bite, and all the secrets of the universe will be revealed, my friend.

Mouthwatering fresh ground fatty pork ball grilled to perfection on an open flame, over a plate of white rice noodles and a side dish of delicious dipping sauces, garnished with a variety of fresh herbs. If your first bite doesn’t drive you to tears (as in uncontrollable sobbing) of complete and utter happiness, then nothing. ever. will. 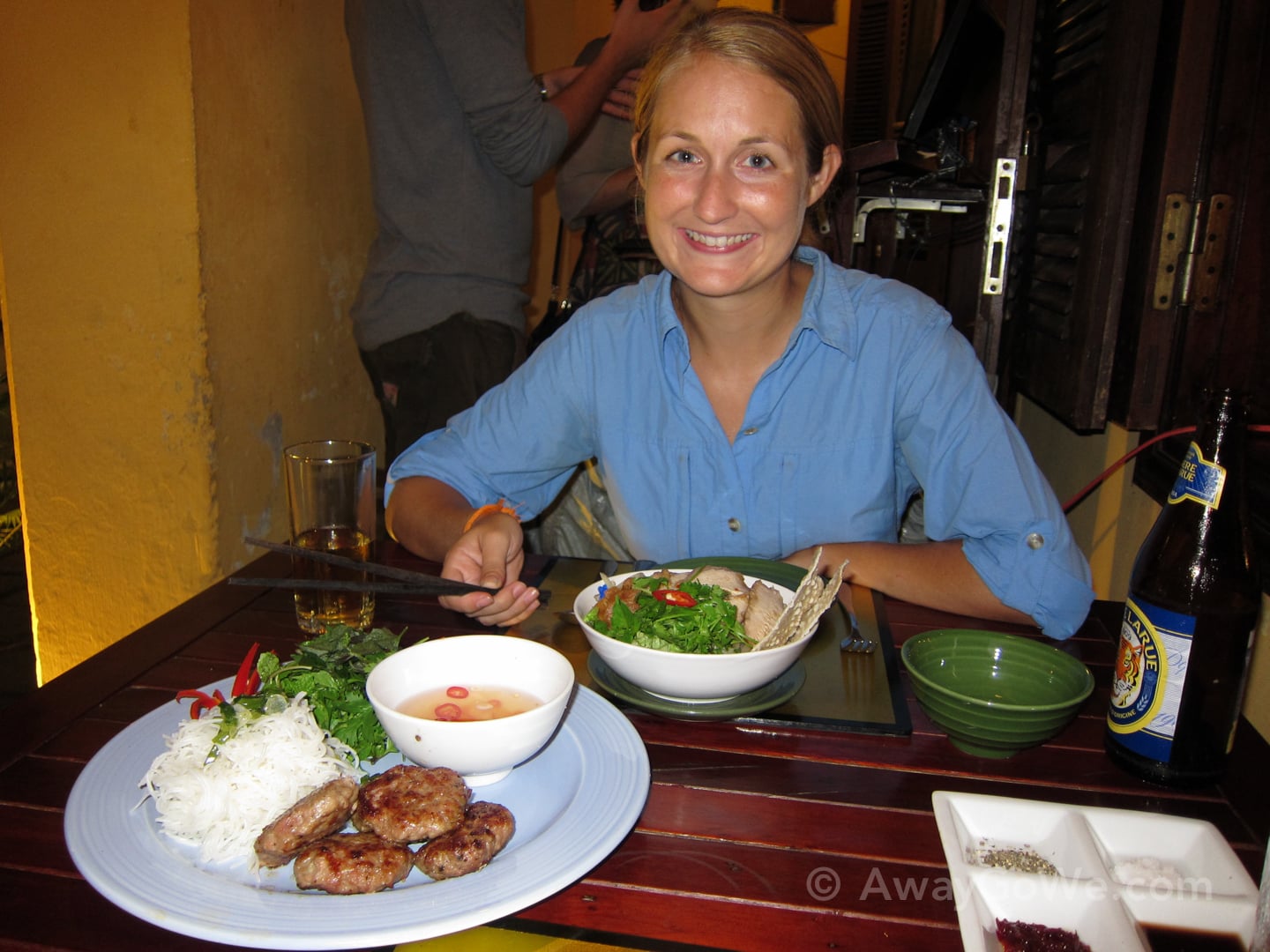 Bun Cha (foreground) at Morning Glory Restaurant — pictured with the other love of my life…and whatever collection of culinary unworthiness she’s decided to stuff into her kisser on this magical evening.

I hope you plan to publish a book someday. These posts are fabulous!