A Detailed Self-Guided Walking Tour of the Istanbul City Walls

Exploring the ancient Istanbul Walls on your own is an unforgettable urban adventure and trip back in time with our detailed walking map and visitor guide.

Istanbul walls, Land Walls of Constantinople, Byzantine Walls, and the Theodosian Wall are all popular names for the fascinating ancient ramparts constructed nearly two millennia ago to defend this historic city.

Known by many names, the unique and historic Istanbul walls are not yet widely known to mass tourism.

A relative few, however, seem to make it beyond the boundaries of Sultanahmet (i.e. the Old City), or are even aware that physical remnants of the ancient city walls of Constantinople not only exist, but offer a unique and unforgettable way to dive deeper into Istanbul’s past, present, and future.

Here’s what you need to know about visiting the largest existing section of the Istanbul walls, the Theodosian Wall, including the most detailed map on the web for doing a self-guided walk along any length of this amazing 7 km-long archeological site.

The Istanbul Walls in Brief

Basic overview of the self-guided walking tour of the Theodosian Wall. Read on for more detail and our interactive map.

What Are the Istanbul Walls?

The city walls were constructed for the usual purposes of keeping invading marauders out–and the good times in.

A century later, the Theodosian Wall was constructed farther to the west, enlarging the city significantly. These are perhaps the most interesting of the surviving Istanbul walls.

Keep Reading for the most detailed Istanbul walls self-guided walking tour on the web!

We walked along remaining stretches of the Theodosian wall, which was constructed in the 5th century, A.D.

To our amazement, much of the original ramparts and gates still exist, and some have also been restored. You can even walk along the top of significant stretches of the city walls as well!

Why Visit the Istanbul Walls?

Istanbul’s old city walls cut through a fascinating area of the city that differs significantly from the primary tourist centers, lending a far different perspective on daily life in this city of 15 million.

Climbing the Istanbul walls, however, was the highlight of our trek (yes, you can even climb the ramparts in some sections!), offering stunning views of the massive sprawl that is Istanbul in the 21st century. 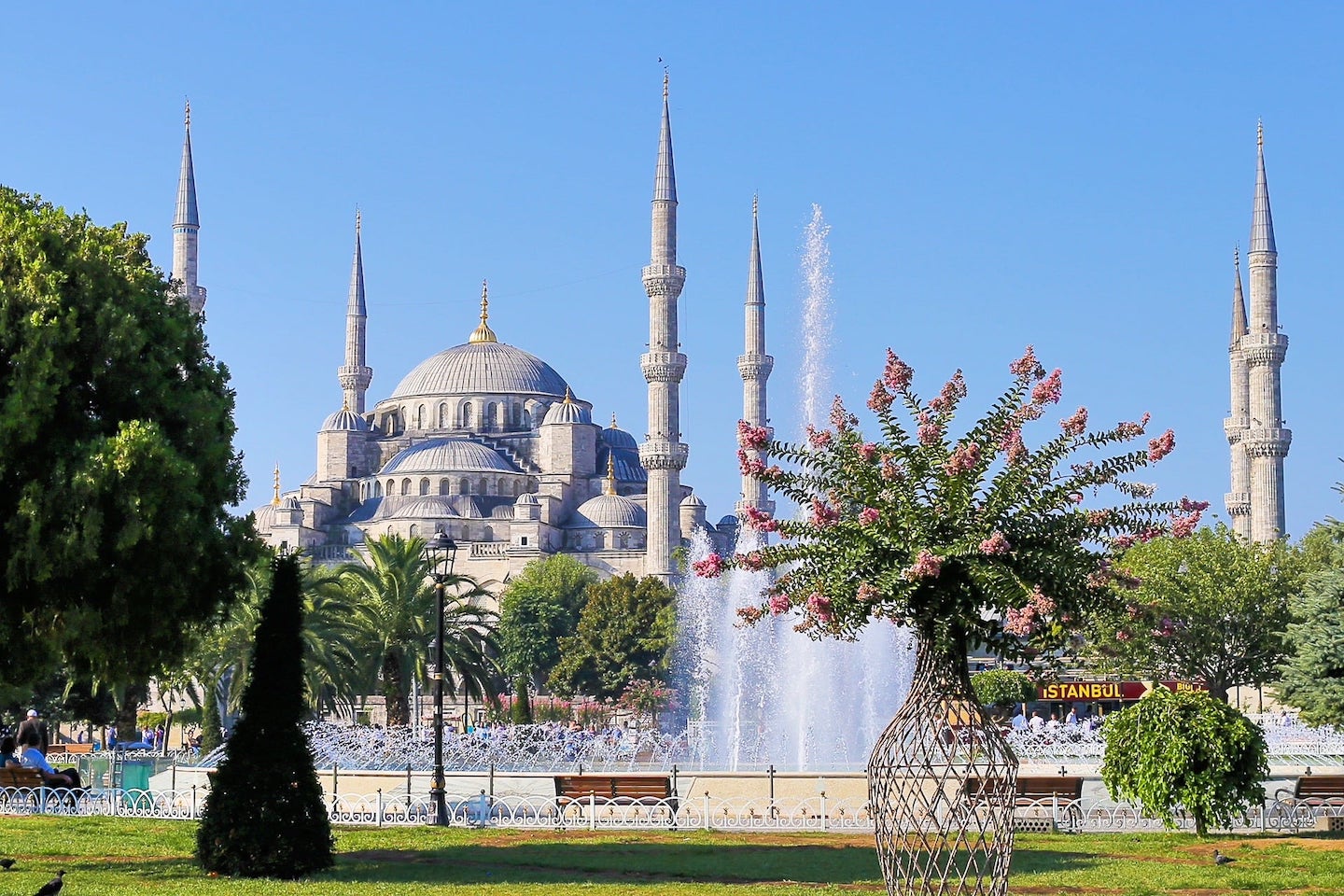 15 Awesome Things to Do in Istanbul with Kids

Our essential guide to visiting Istanbul, Turkey with kids of all ages! For the ultimate family vacation!

While exploring the ancient city walls, we came across a coffee shop, perfectly positioned to take advantage of all two of the wall’s visitors (us) on this particular day.

In addition to the amazing views and unique interaction with physical history, walking the length of the Istanbul walls also offers a glimpse into the city’s meteoric rate of gentrification.

In many ways, exploring the city walls is a perfect way to wrap up a stay in Istanbul, immersing yourself in the city’s ancient past while gaining insight into Istanbul’s future.

Alright, let’s get to it! Below, you’ll find our very own detailed, handcrafted map for exploring any section of the Theodosian Walls of old Constantinople on your own.

We’ve gone to great lengths to include as much information for historic points of interest as we can. As you might imagine with 7 km of wall, however, there’s a lot still missing here. Much of the information is either disputed by scholars or hard to match up to the exact location. 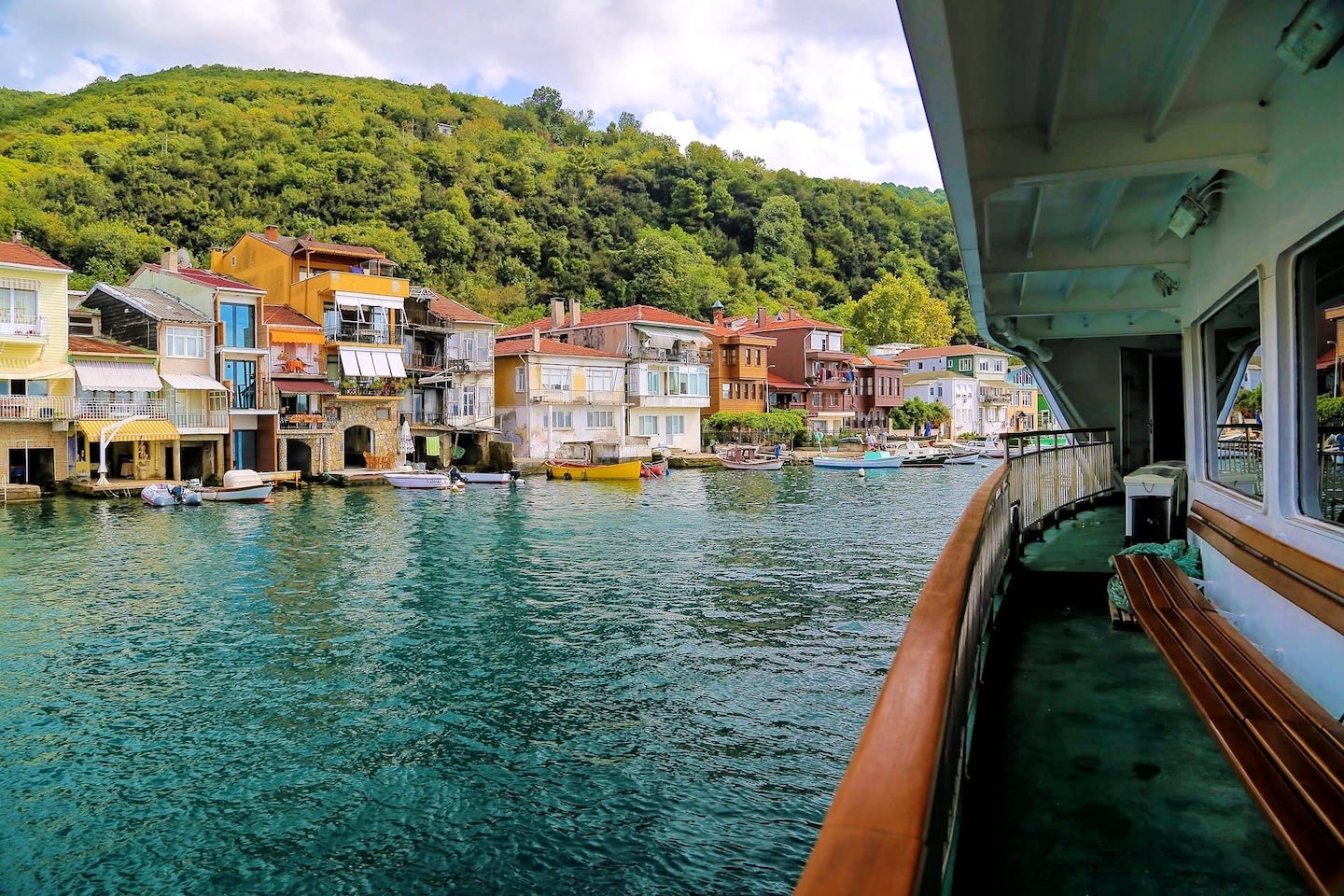 Planning an UNFORGETTABLE trip to Istanbul? Check out...

Istanbul Bosphorus Cruise on a Budget

Our detailed, first-hand guide for getting the best deal!

Would We Do this Self-Guided Walking Tour Again?

In hindsight, we were happy with our DIY urban explorations, but felt like we could have gotten a whole lot more out of this once-in-a-lifetime experience if we’d hopped on a tour or hired a guide with deep local knowledge.

We know we certainly we missed out on a boatload of secrets, both ancient and contemporary. There are so many sections of the wall that have no available information in English, and it was obvious that there is major social and economic changes happening in the neighborhoods flanking the walls.

Plus, we still don’t know what’s up with all those cats!

If we were to do it all over, we’d hop onto one of these tours, or even fold it into an all-day city tour.

If you’re still keen to go the self-guided route, read on!

Visiting and walking along the Istanbul walls is fairly straightforward, and only costs the price of a ferry ticket or taxi to get you there.

We took the ferry to Golden Horn Park (Haliç Parkı) / Ayvansaray Ferry Stop at the northernmost point of the city walls, where the walls meet the Golden Horn (see interactive map below).

How to Use the Map

A few important notes about using our interactive map:

Read up on our other helpful articles:

Have You Walked the Istanbul Walls?

What was your experience like? Tell us about it in the comments below.