Cárnival Dominicana: A Guide for Travelers

Reveling in Dominican Republic Carnival — a lively, vibrant, and surprisingly competitive event in Santo Domingo. Here’s what to expect.

Continuing on into the evening of Day Two of our DR backpacking adventure, we get our first taste Dominican Republic Carnival!

Carnivál in the DR is very competitive and there are prizes given out to the best of the best. Many people spend the entire year creating their costume and some spend thousands of dollars.

Each city across the country holds it’s own parade. The one in La Vega is considered the oldest Carnival celebration in the Americas, and the best.

However, the capital Santo Domingo hosts the grand finale parade, the largest carnival celebration in the Dominican Republic, which is what we have the good fortune of seeing today!

Setting out from the old hospital ruins on the edge of the Old City, we didn’t exactly know where we were going at first. We figured we’d either find a taxi along the way or eventually make our way down to the parade. We wanted to walk there, but every Dominican we asked seemed to think we were crazy to want to walk so far.

Lori and I began to plot our own route, but before we could pull out our map, we noticed a group of people in bright costumes passing us on the street. Then another, and another. So, naturally, we followed them.

A block later the number of revelers had multiplied substantially, most of them children, until the street was packed and we found ourselves in a stream of people flowing in one definitive direction.

A short while later, the stream thinned and joined a larger crowd moving in a new direction, westward along the Malecón.

We had found Carnival!

I think it’s also worth mentioning that all day we suffered the usual mild molestation one would expect to encounter in the tourist sections of most cities throughout the world.

That is until we set off to find the parade.

Some locals had warned us that we should be extra cautious as there would likely be few foreigners. In my experience, however, I have found that those are often the safest places for foreigners, as locals don’t usually come to local events with an agenda to swindle/threaten/rob/extort/kidnap foreigners. They just come to enjoy the festivities and couldn’t care less that we’re there.

And that’s how I prefer it.

What we did have to watch out for were the men swinging the rubber balls attached to ropes.

Actually, Lori only had to worry about that, as the wrath of the vejiga is only directed toward women.

Apparently, vejigas, along with látigos (whips), were an early form of crowd control, clearing the way for revelers in costume. These days, however, a wrap on the butt is said to bring good luck.

The vejigas were traditionally made with cow or pig bladders and filled with air, but are now mostly made of rubber. 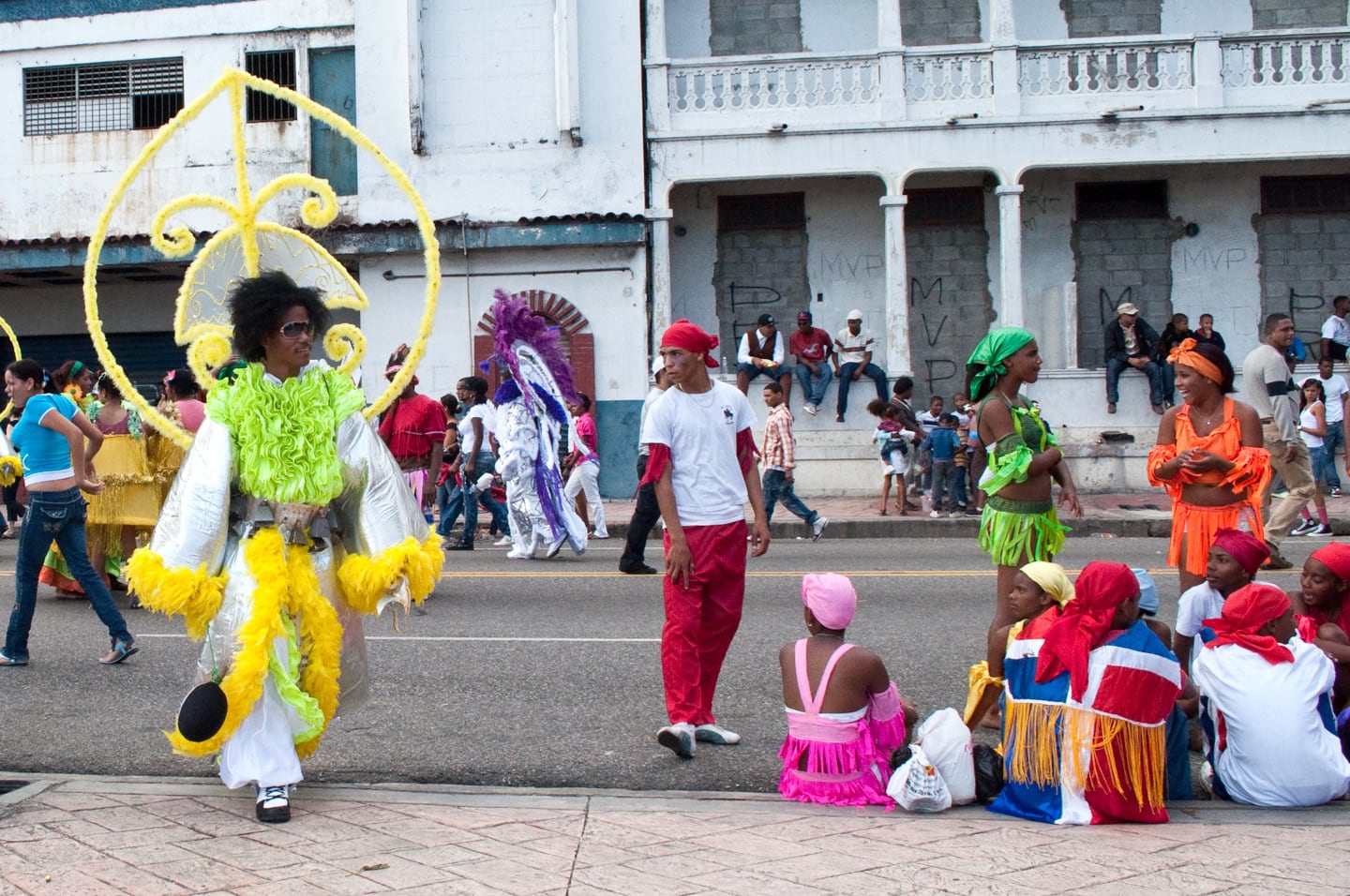 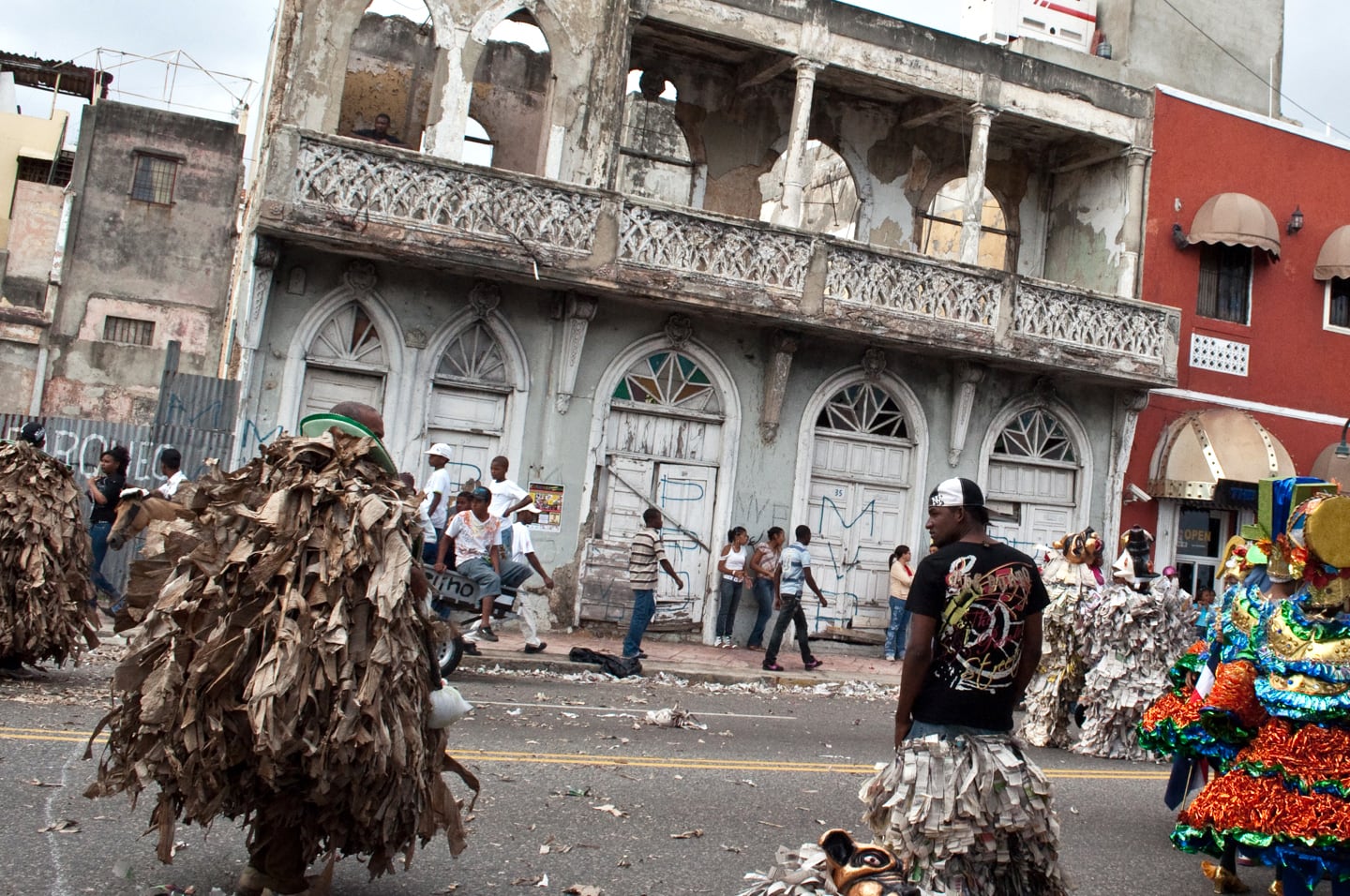 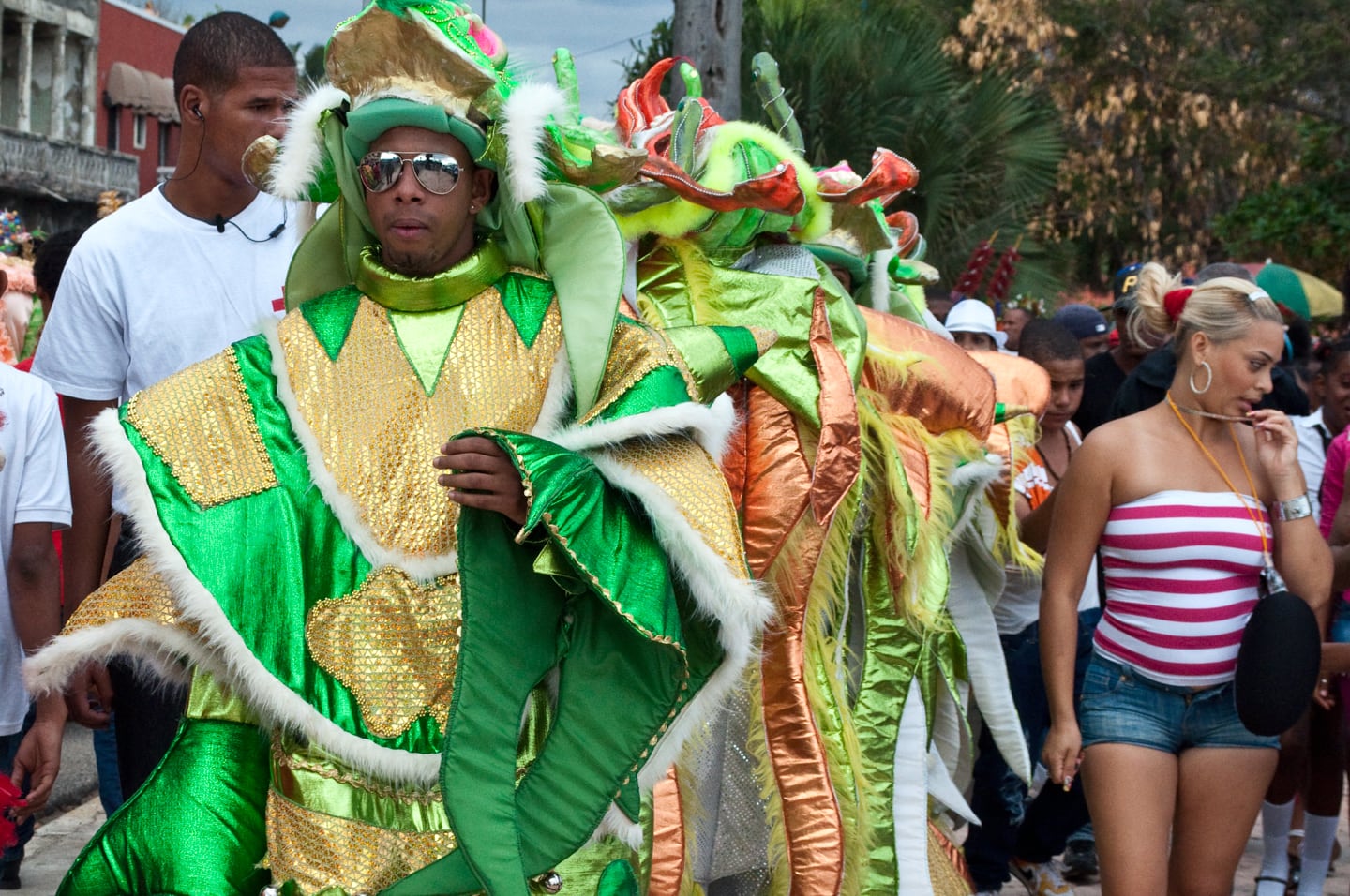 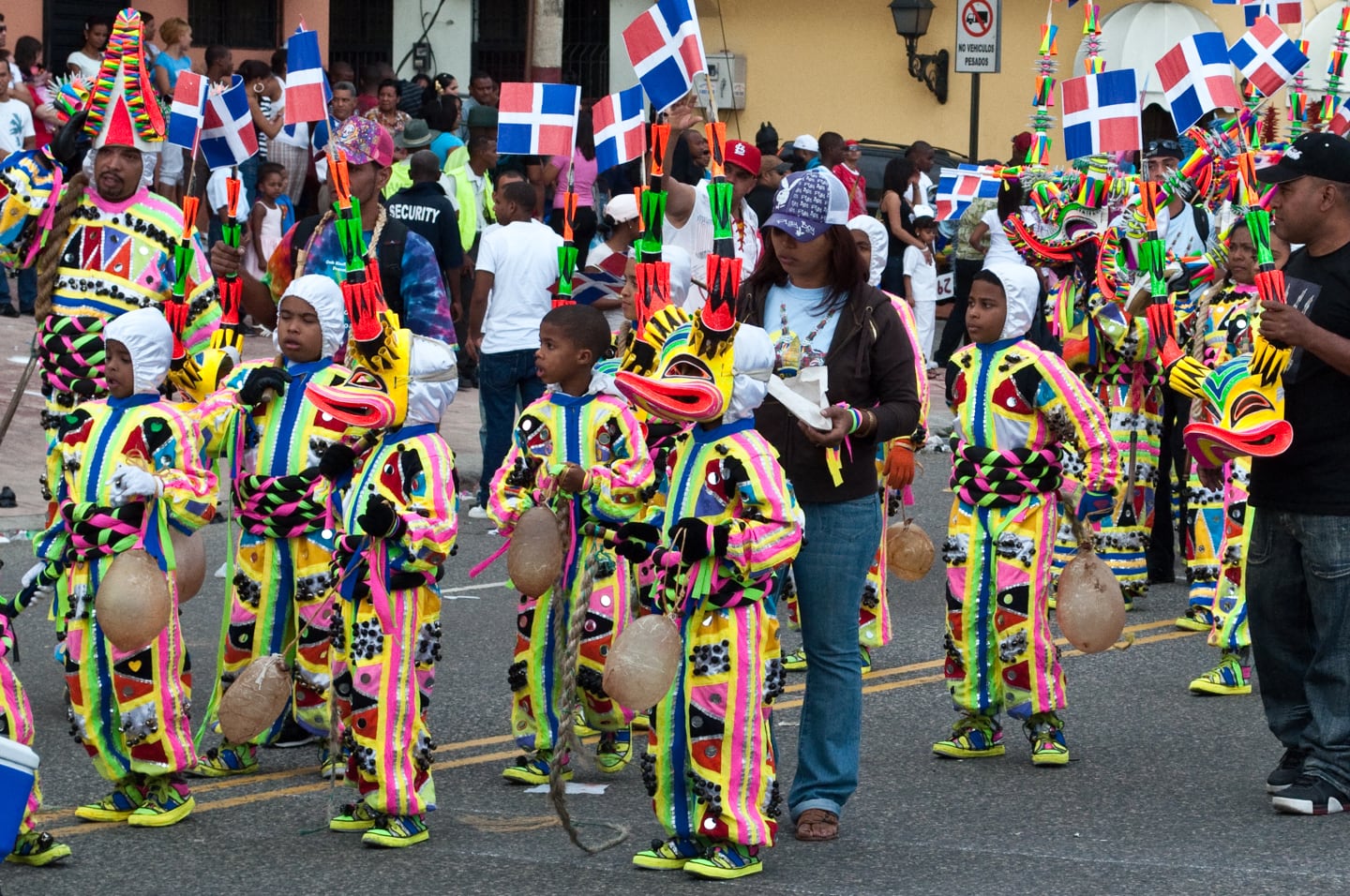 It was an unbelievably vibrant parade, certainly the most colorful event I’ve ever seen. 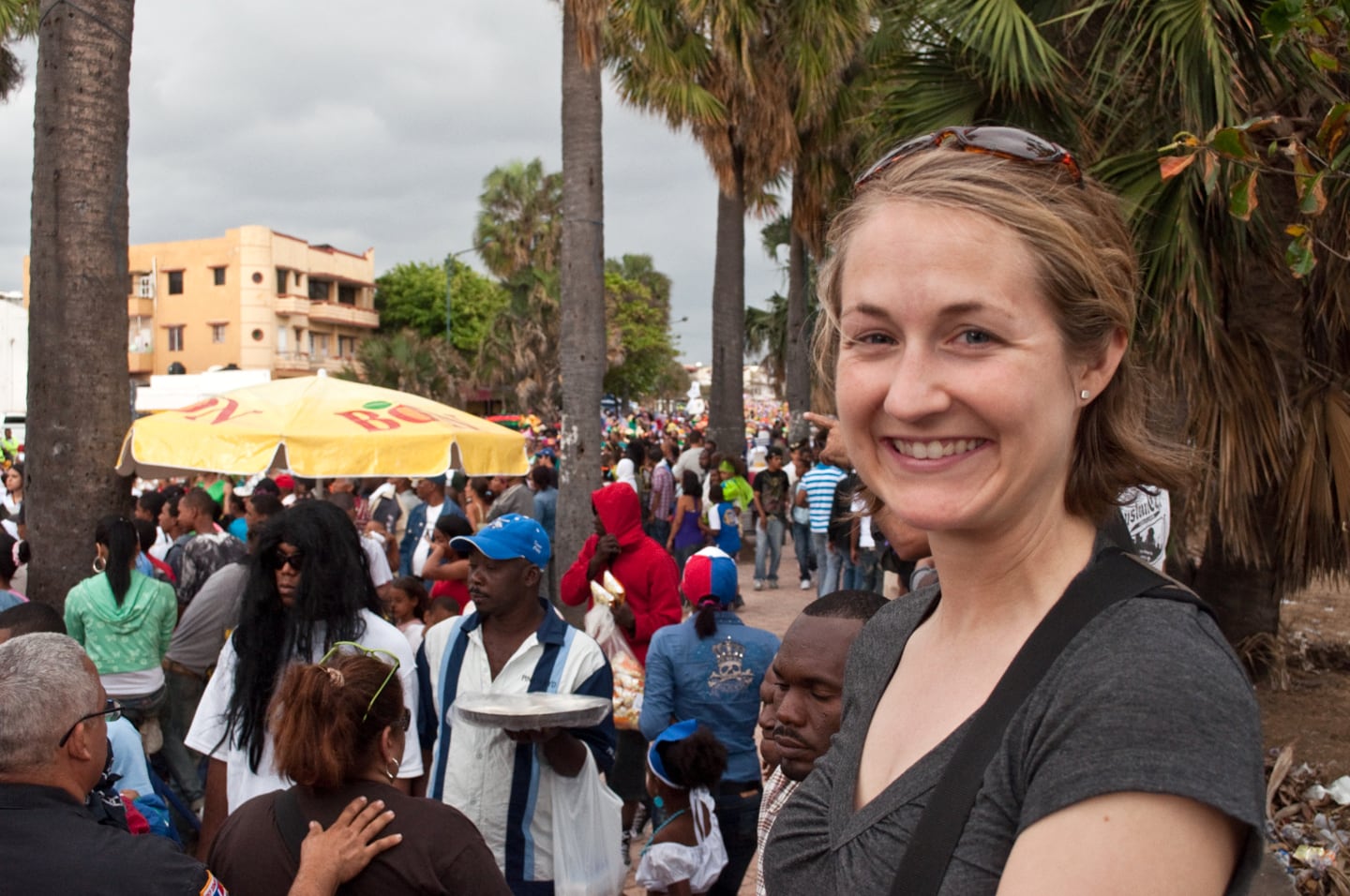 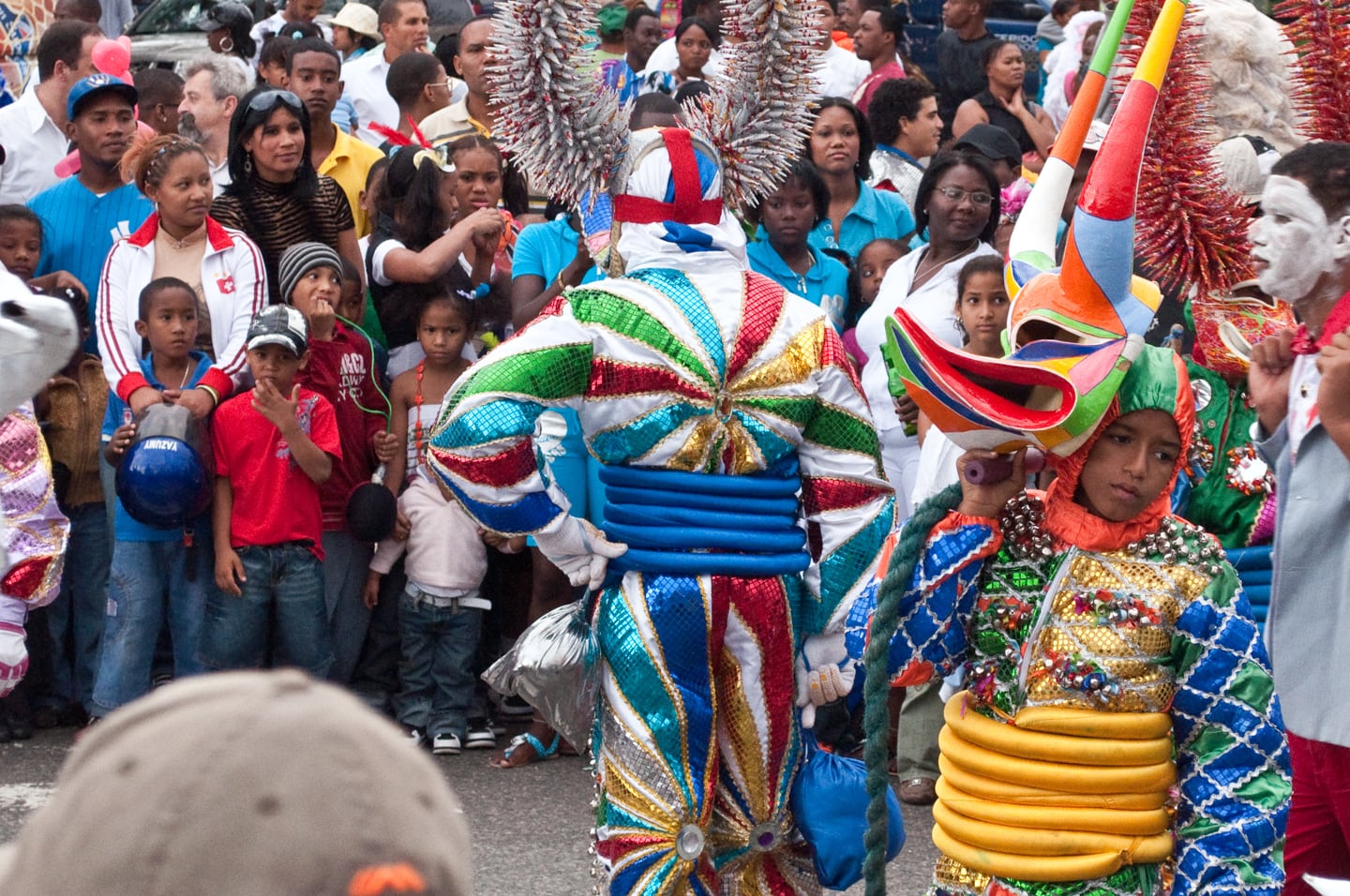 What Is Unique About Dominican Republic Carnival?

Many of the revelers put on crazy, often frightening, masks. I’ve included some more information from this excellent local DR resource, as it would be pointless for me to try and explain it better:

The use of masks to symbolize spiritual, supernatural and unknown spirit world entities has been used since before recorded history. Africa tribes and Native Americans, among the many ancient peoples, used masks to either depict, get the attention of, or to hide themselves from a higher, or more spiritual being. 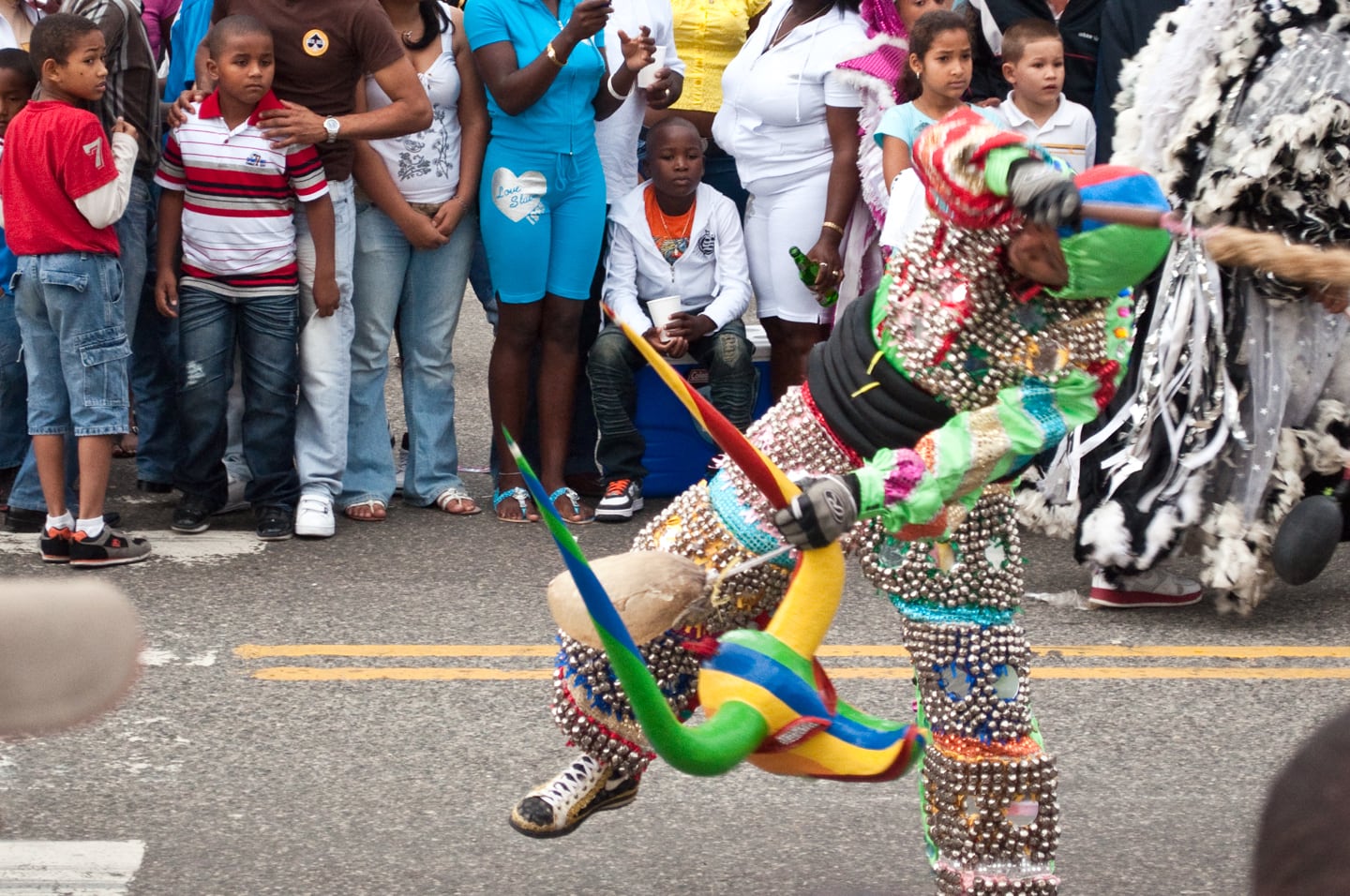 The natives of the island, the Tainos, and the natives of the surrounding islands had their own festivities long before the arrival of the Spaniards. Their celebrations were called areitos. Mainly they were to commemorate planting and harvest times. They also honored weddings, death and other significant happenings in their lives with these celebrations. They would use body decorations, tattoos, paint, jewelry, and masks during these festivals. 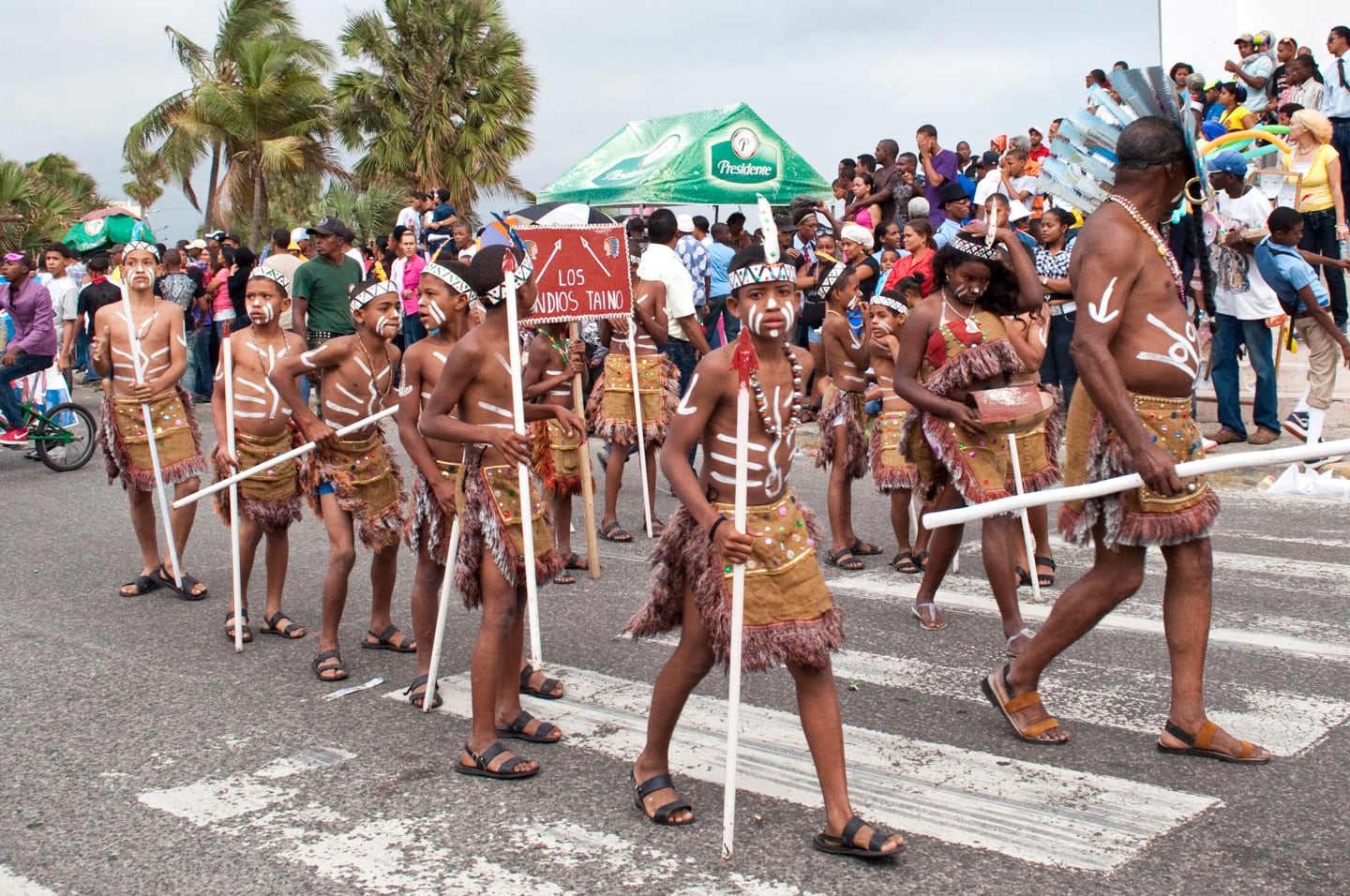 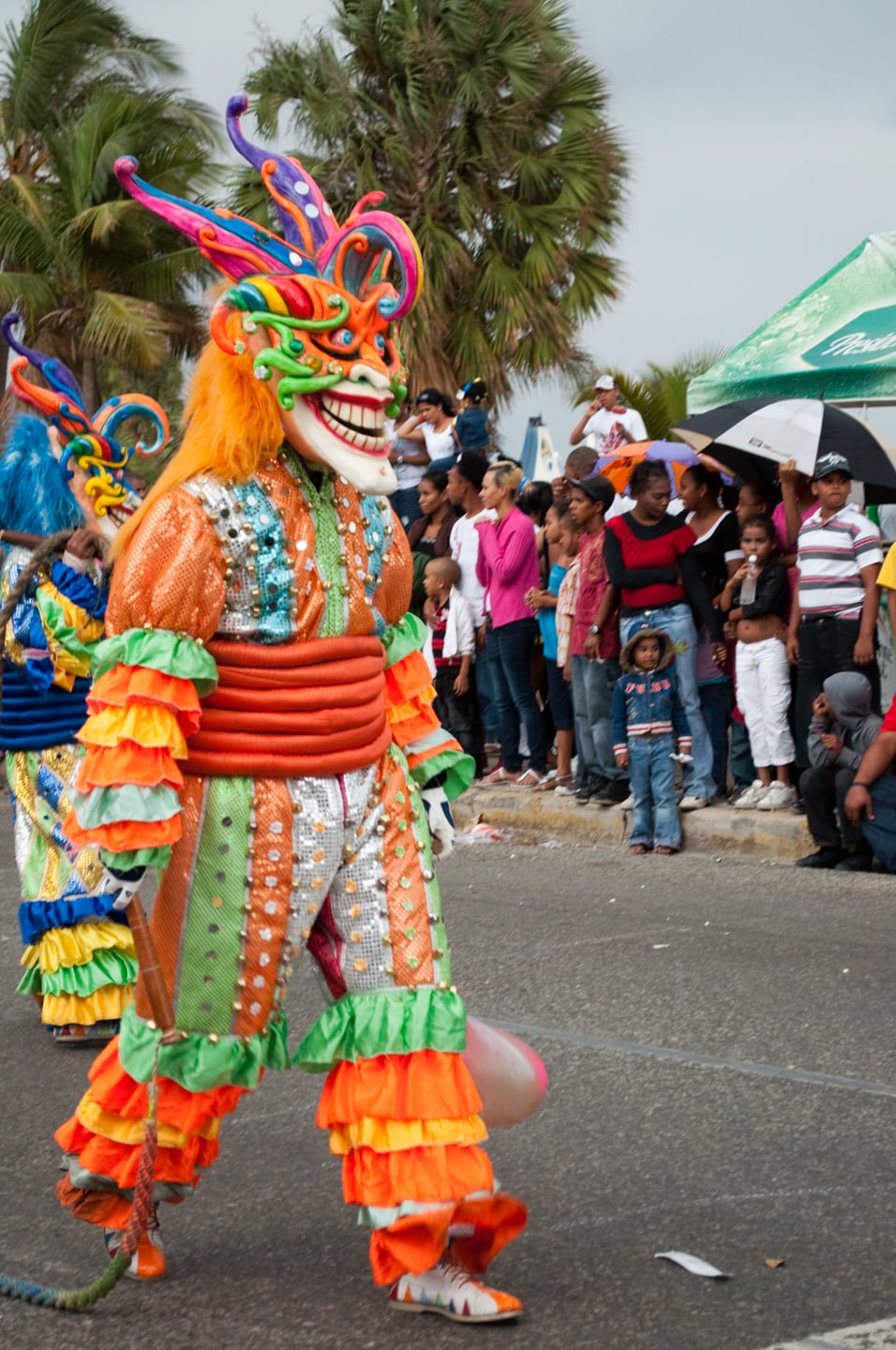 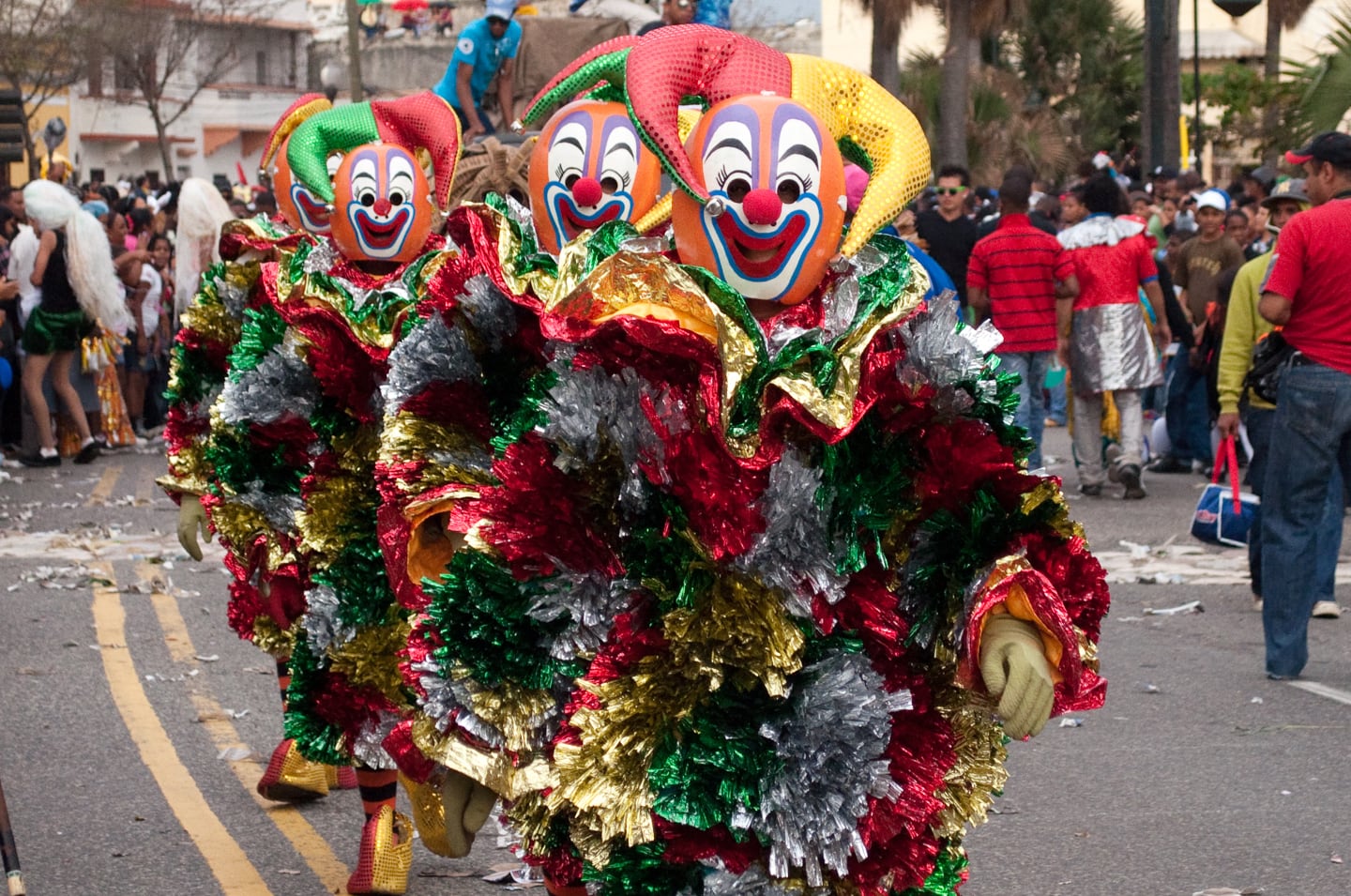 Each troupe represents a different region, town, neighborhood or organization. Each will display their own unique costumes and customs.

In the Dominican Republic, some troupes actually burn their costumes after Carnival as a method of seeking closure, while other troupes give their used costumes to the children. 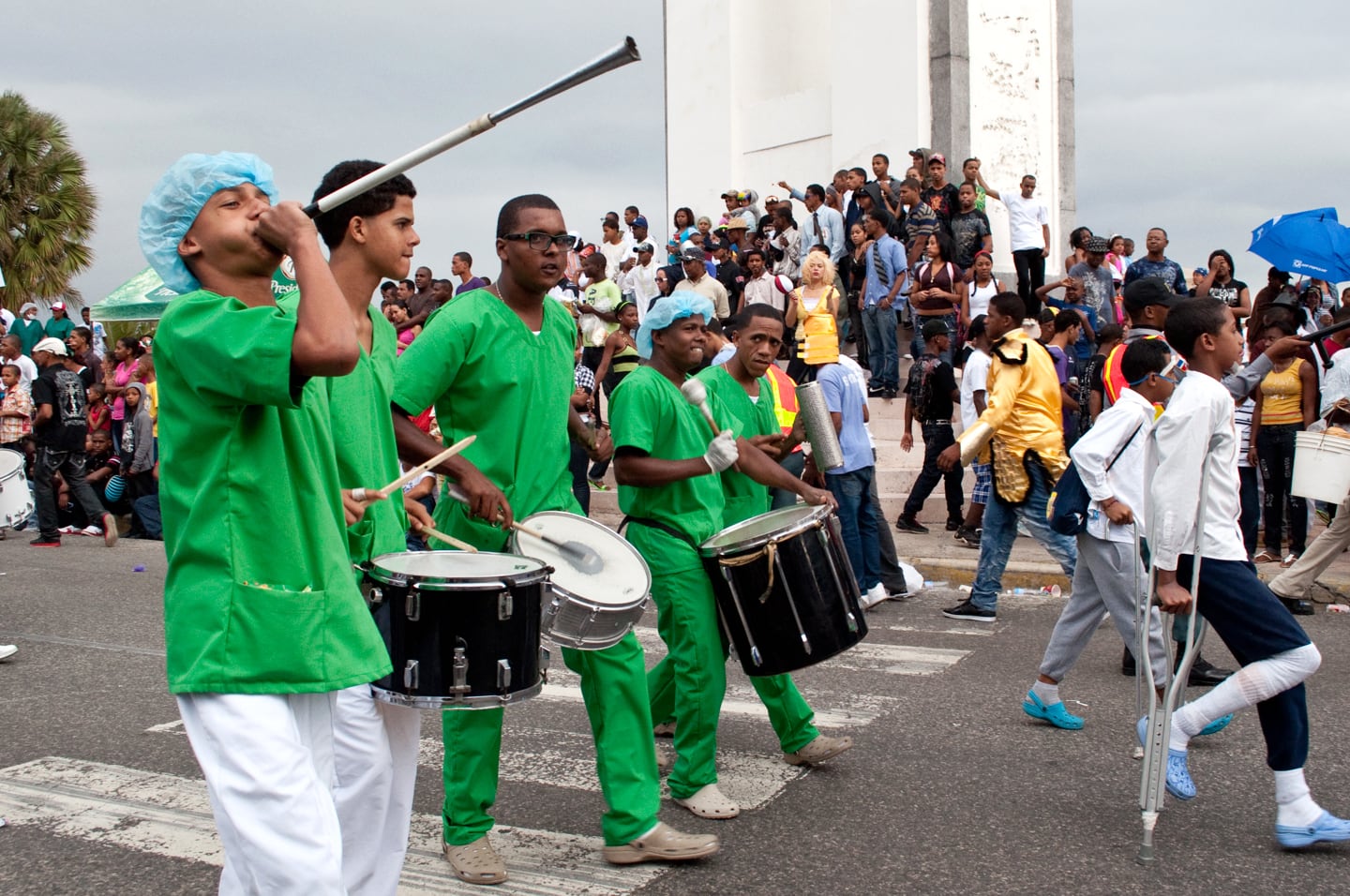 The Dominican standing next to us said that this was a group of hospital workers representing their hospital. 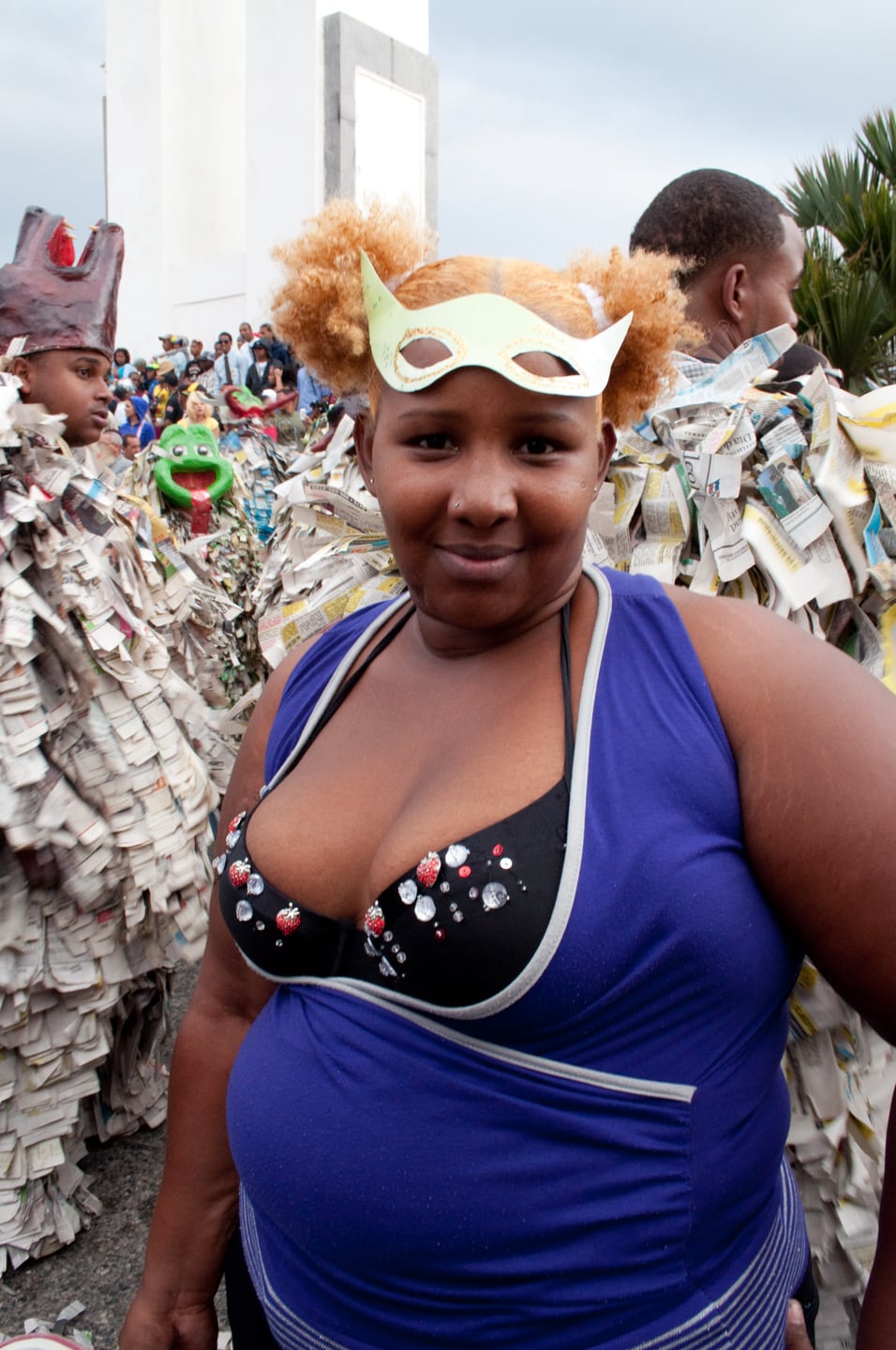 The woman above said, “Take a picture of me! I am not that bad looking!” The woman below is a man (in case you hadn’t noticed). 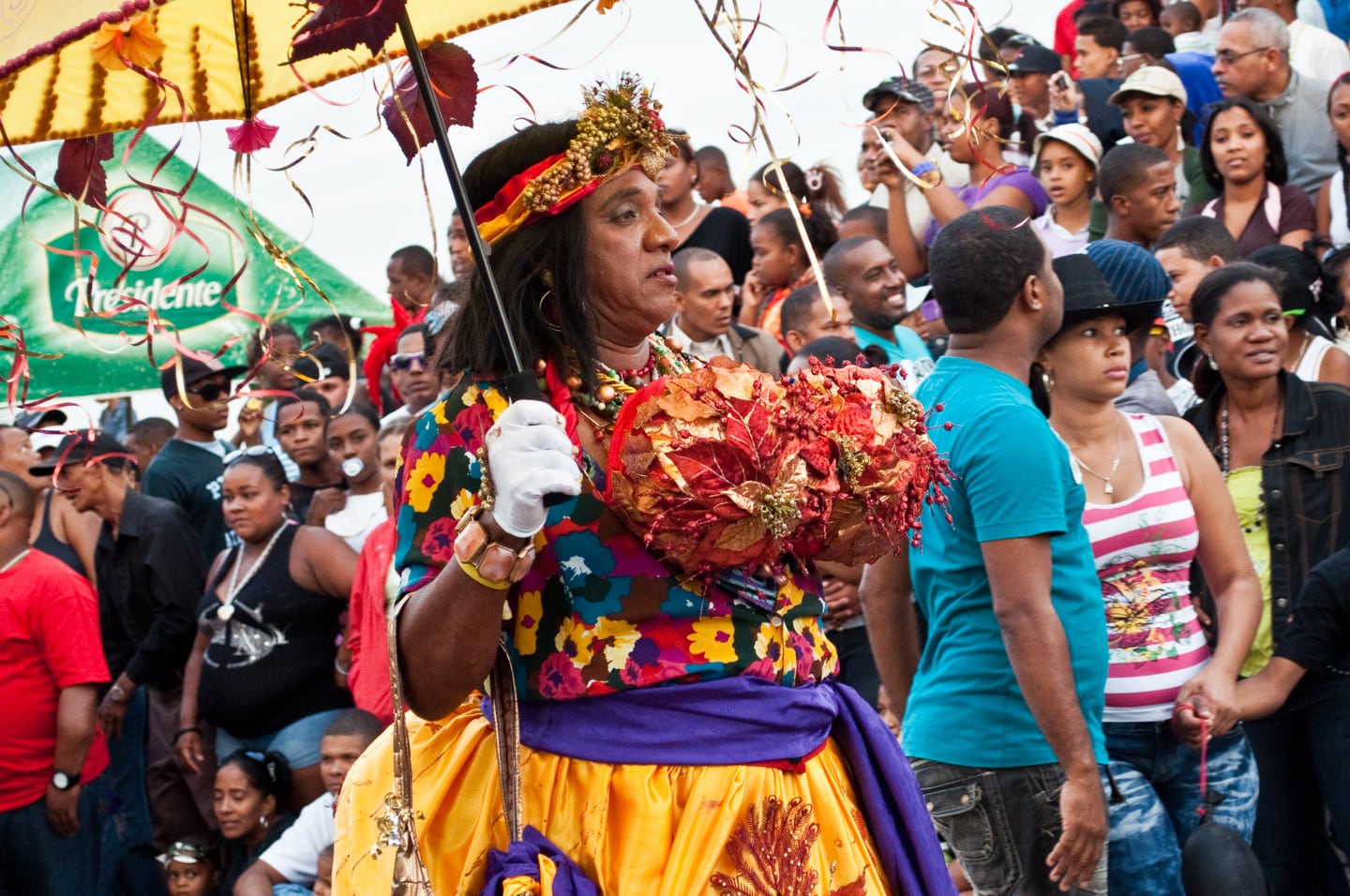 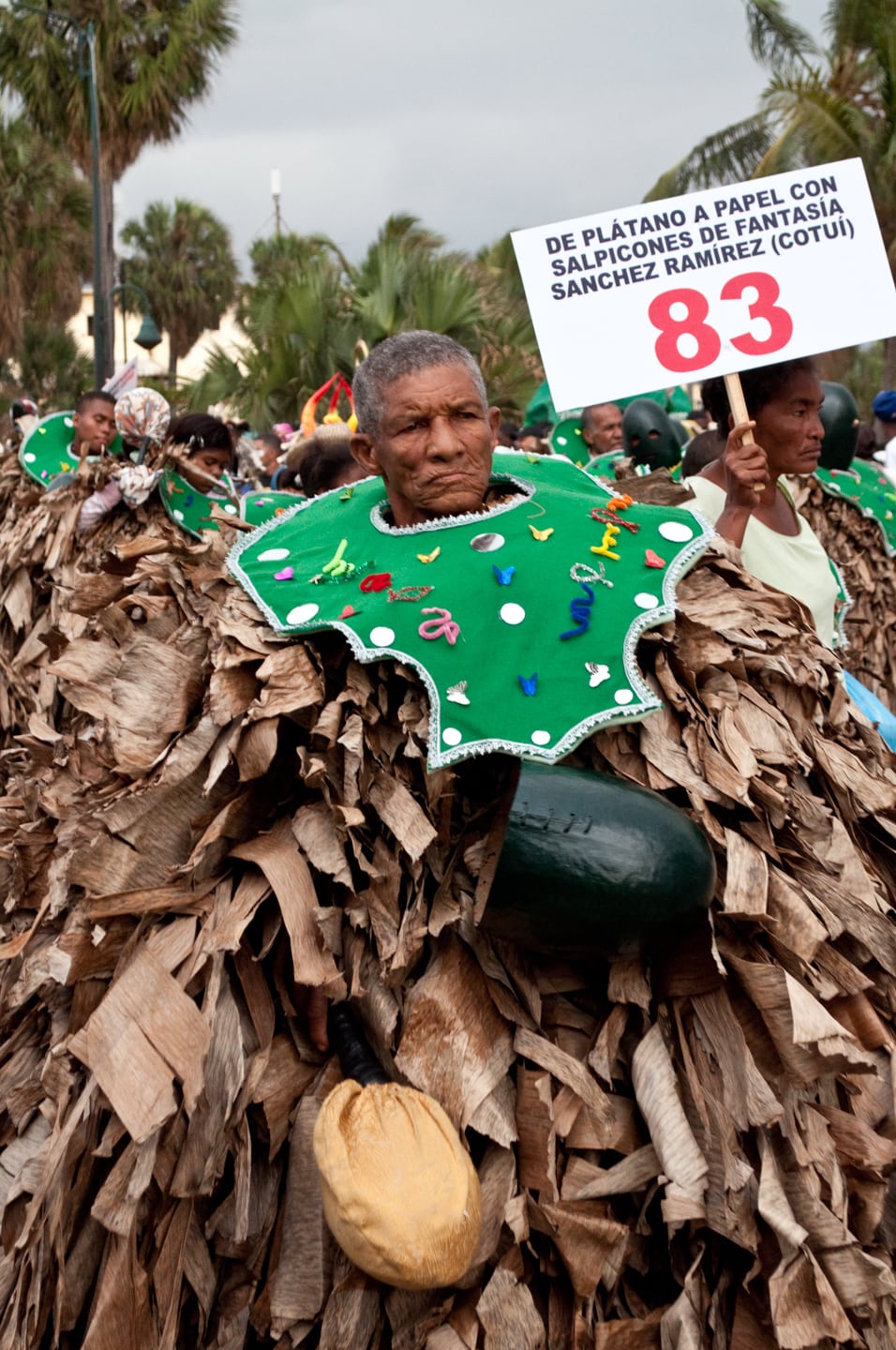 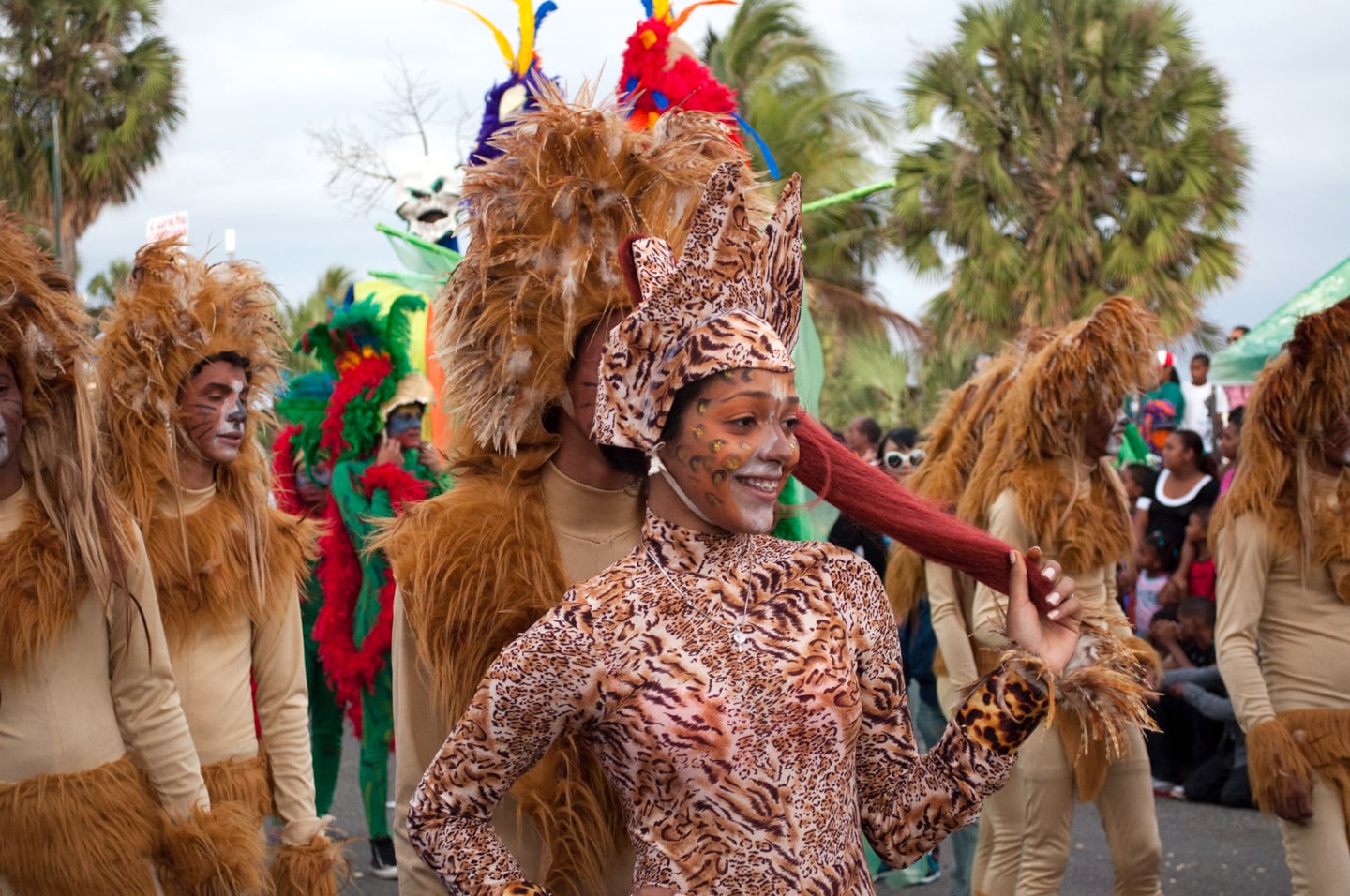 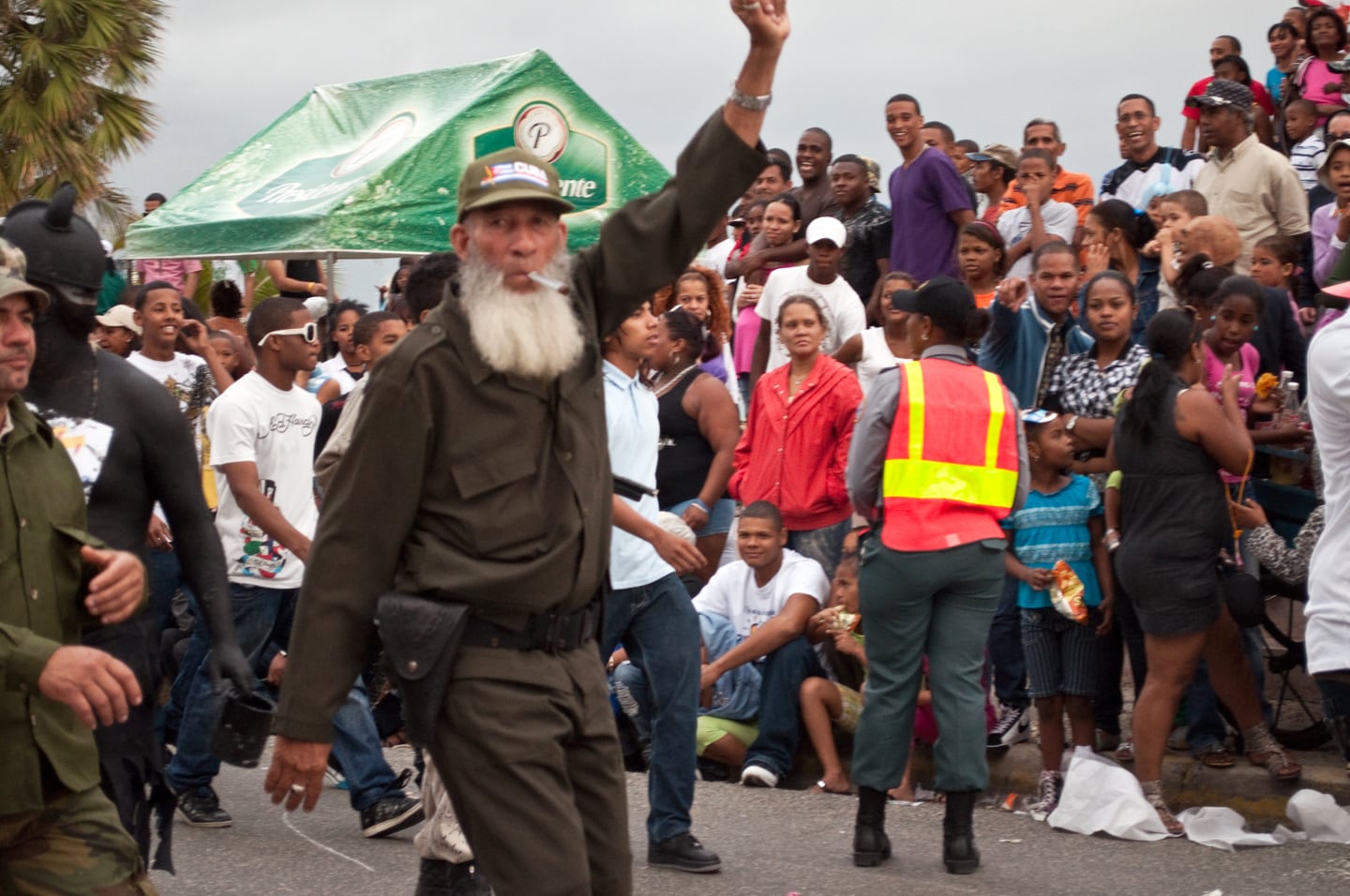 He looks alive and well to me! 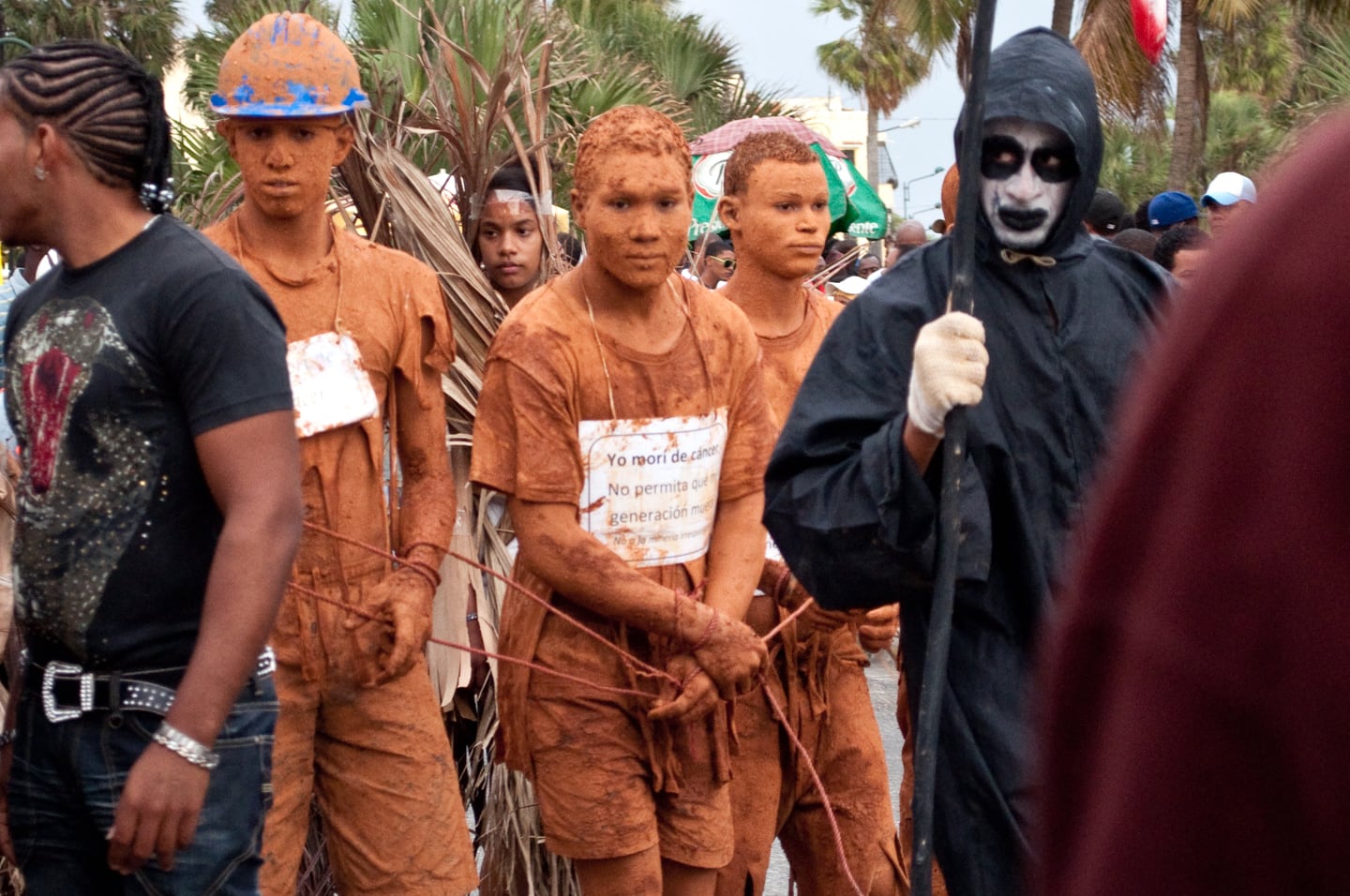 Some costumes are political. I can’t remember what the sign on the front said, but I think it had to do with miners’ health and safety. 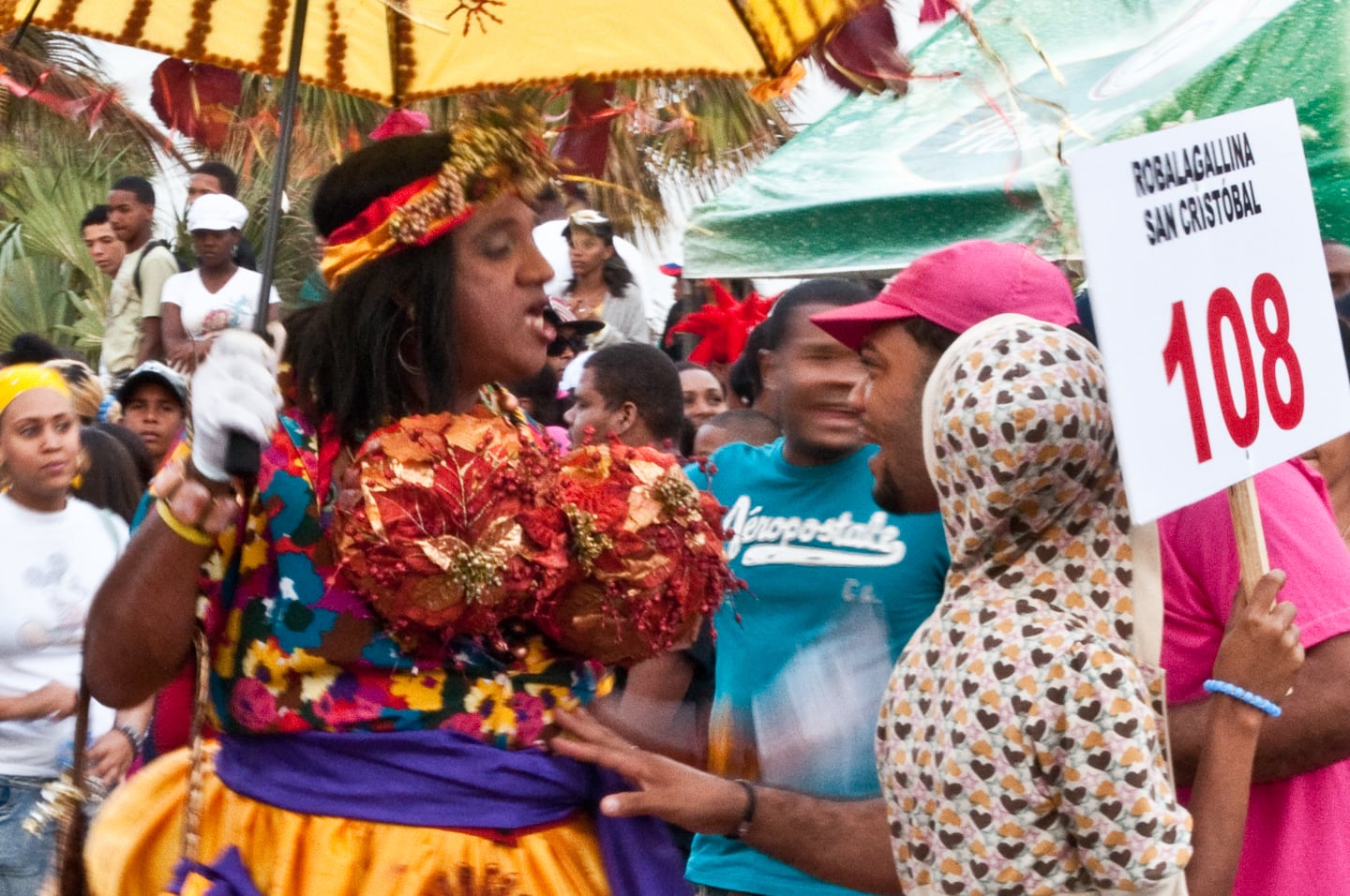 The number is what identifies the troupe to the judges. 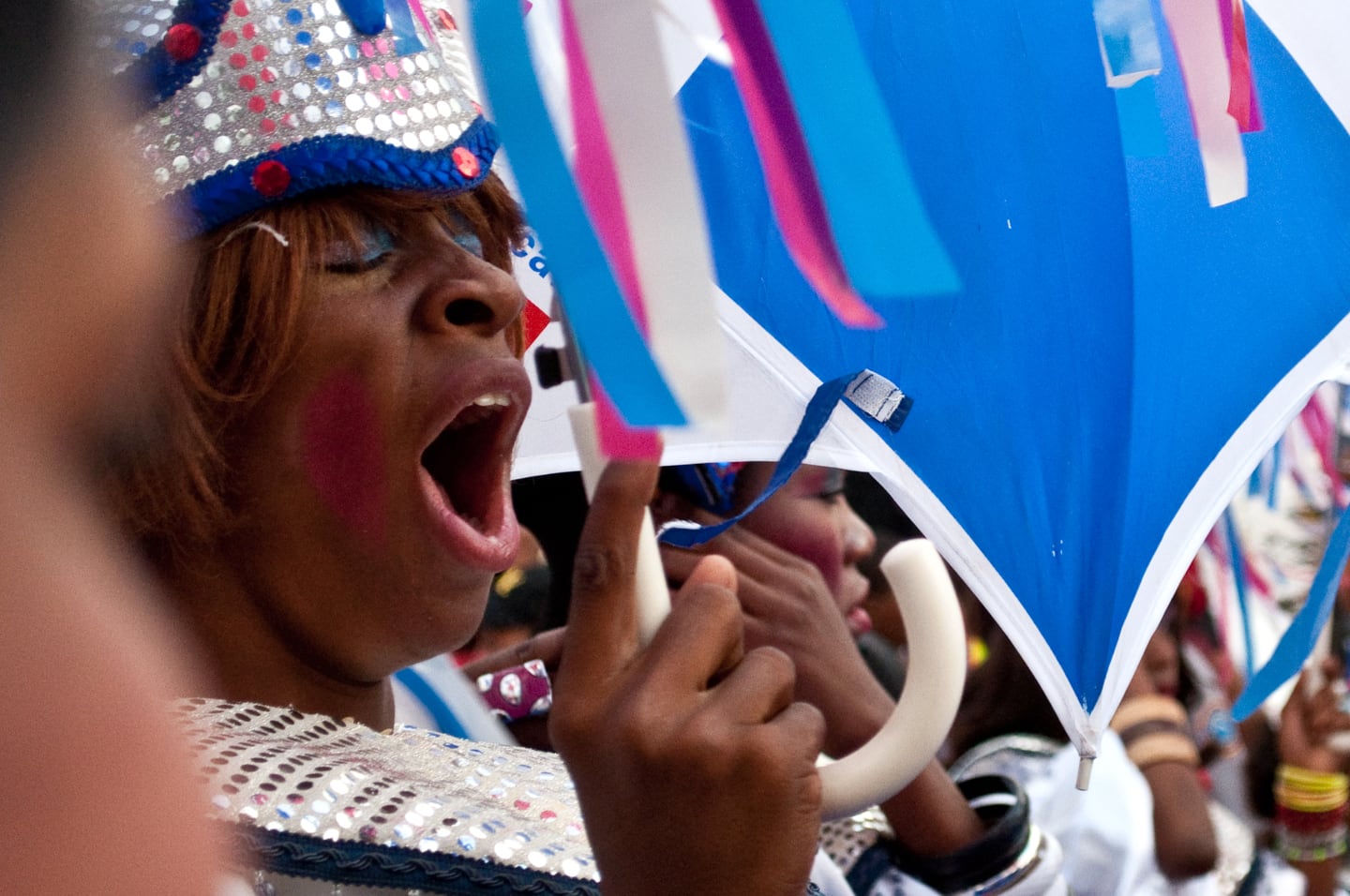 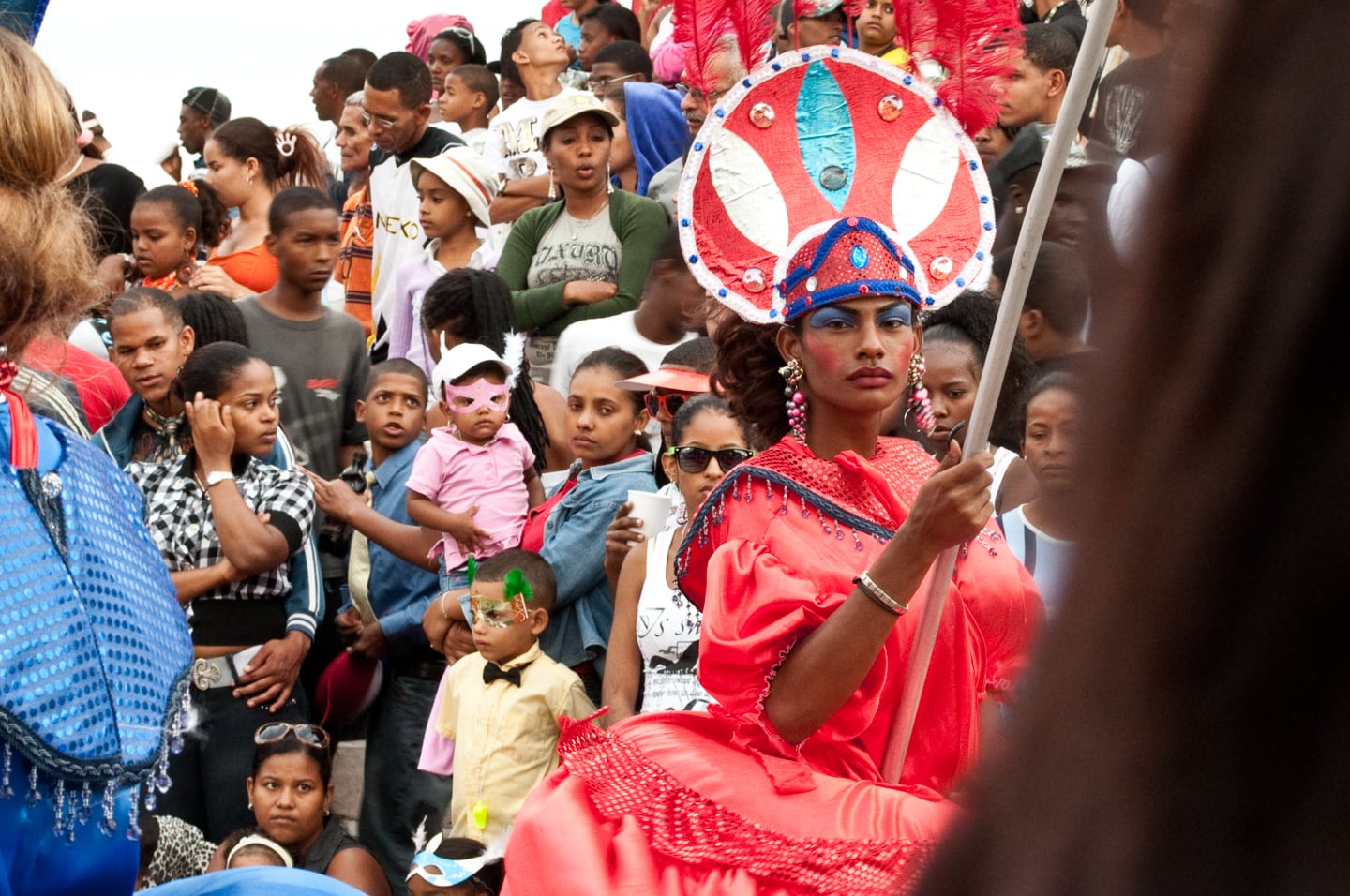 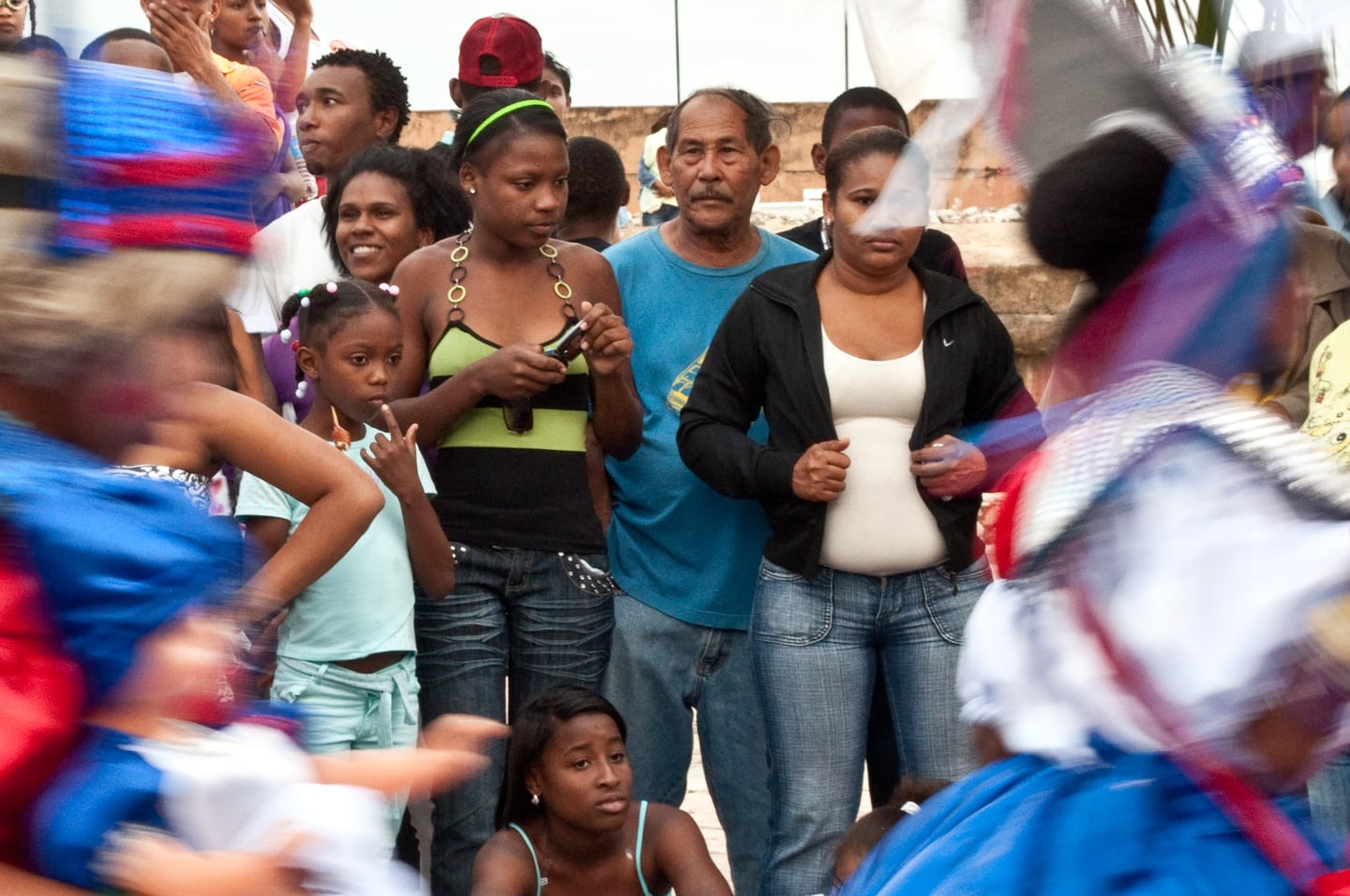 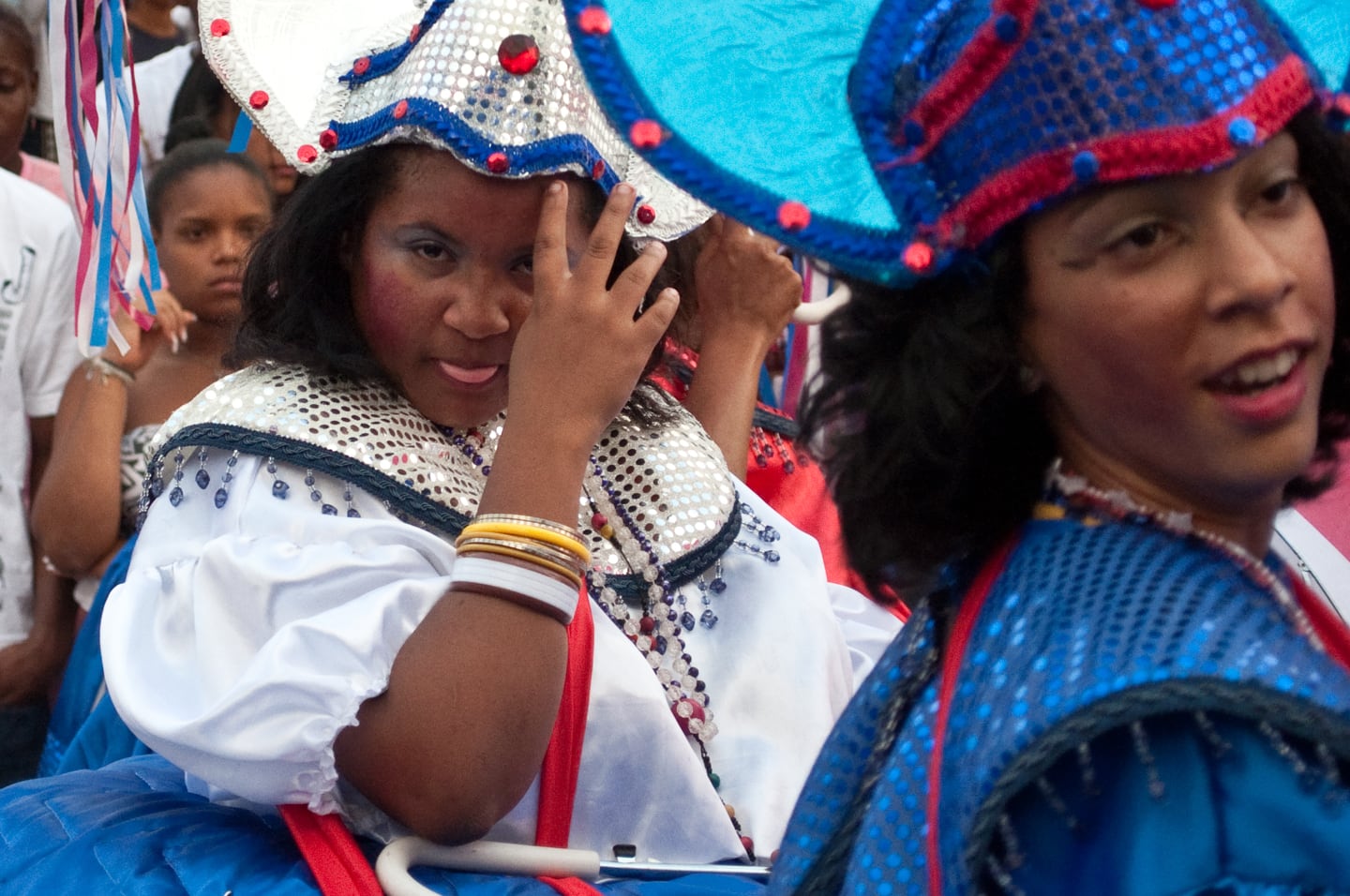 I think she liked me. 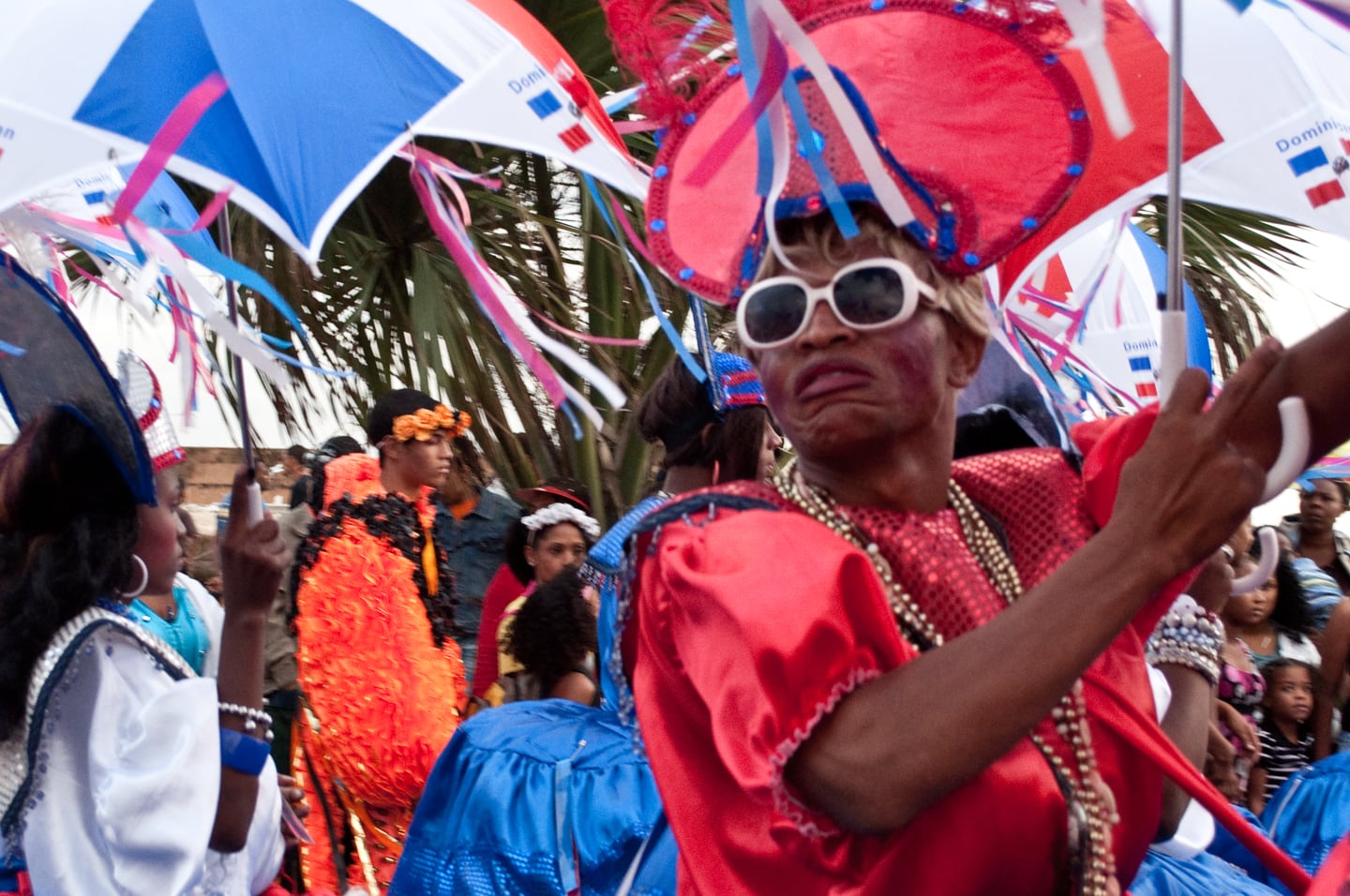 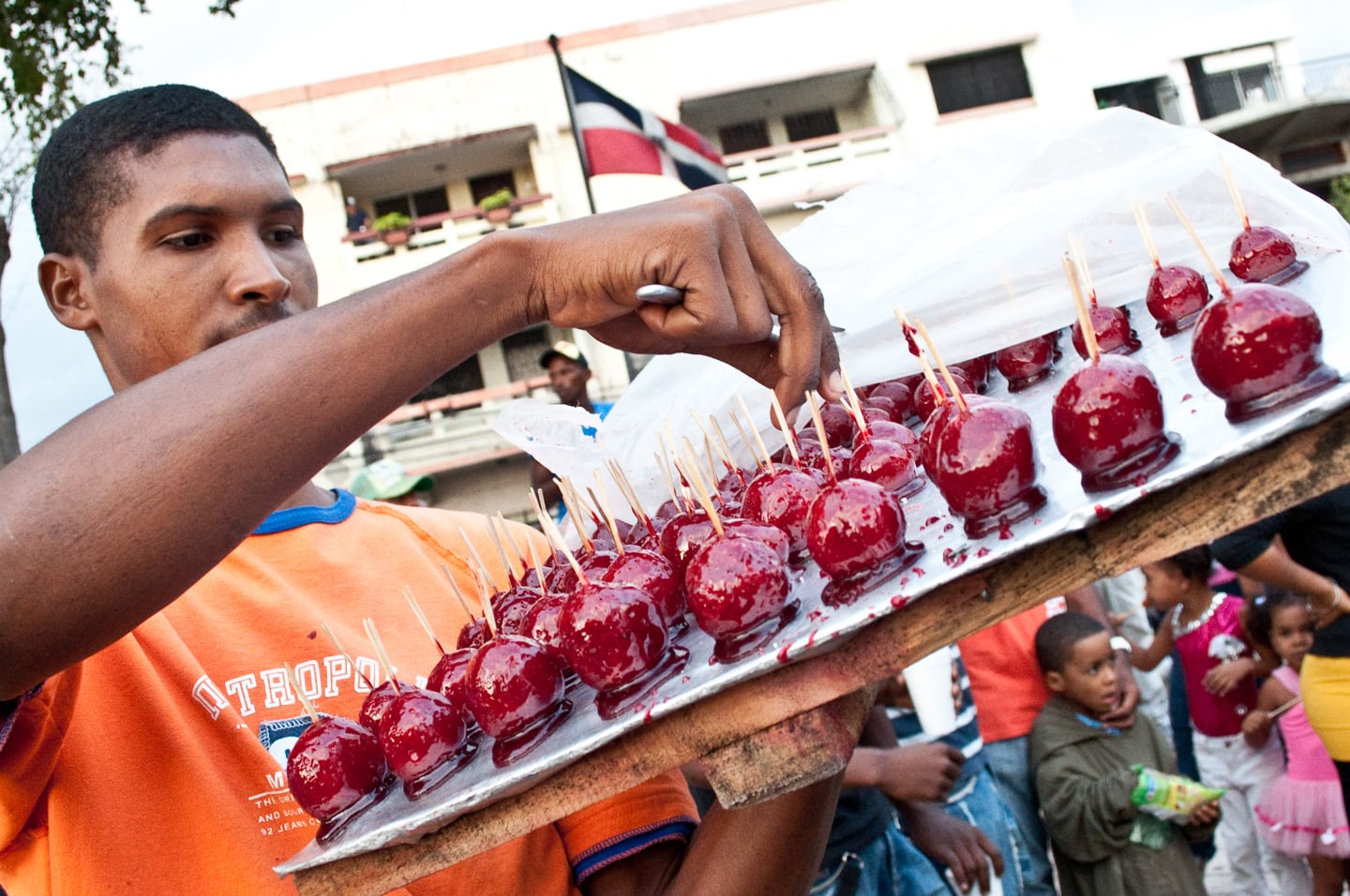 Carnival festivities are good for the economy too. People come from all across the Dominican Republic to partake in the event. Vendors sell everything from mementos to regional treats. These coconut candy balls, in particular, caught Lori’s eye and they were actually pretty good. 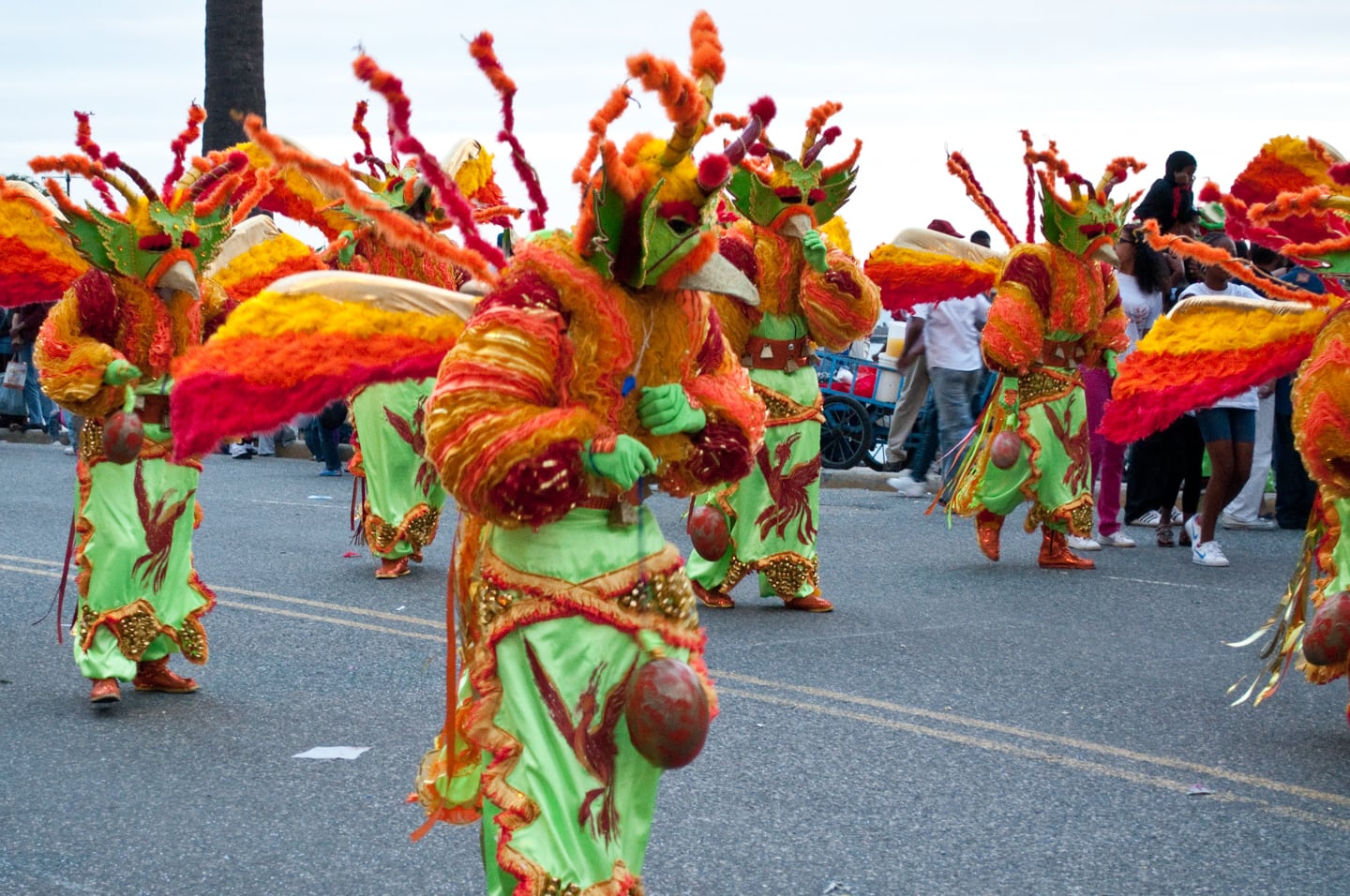 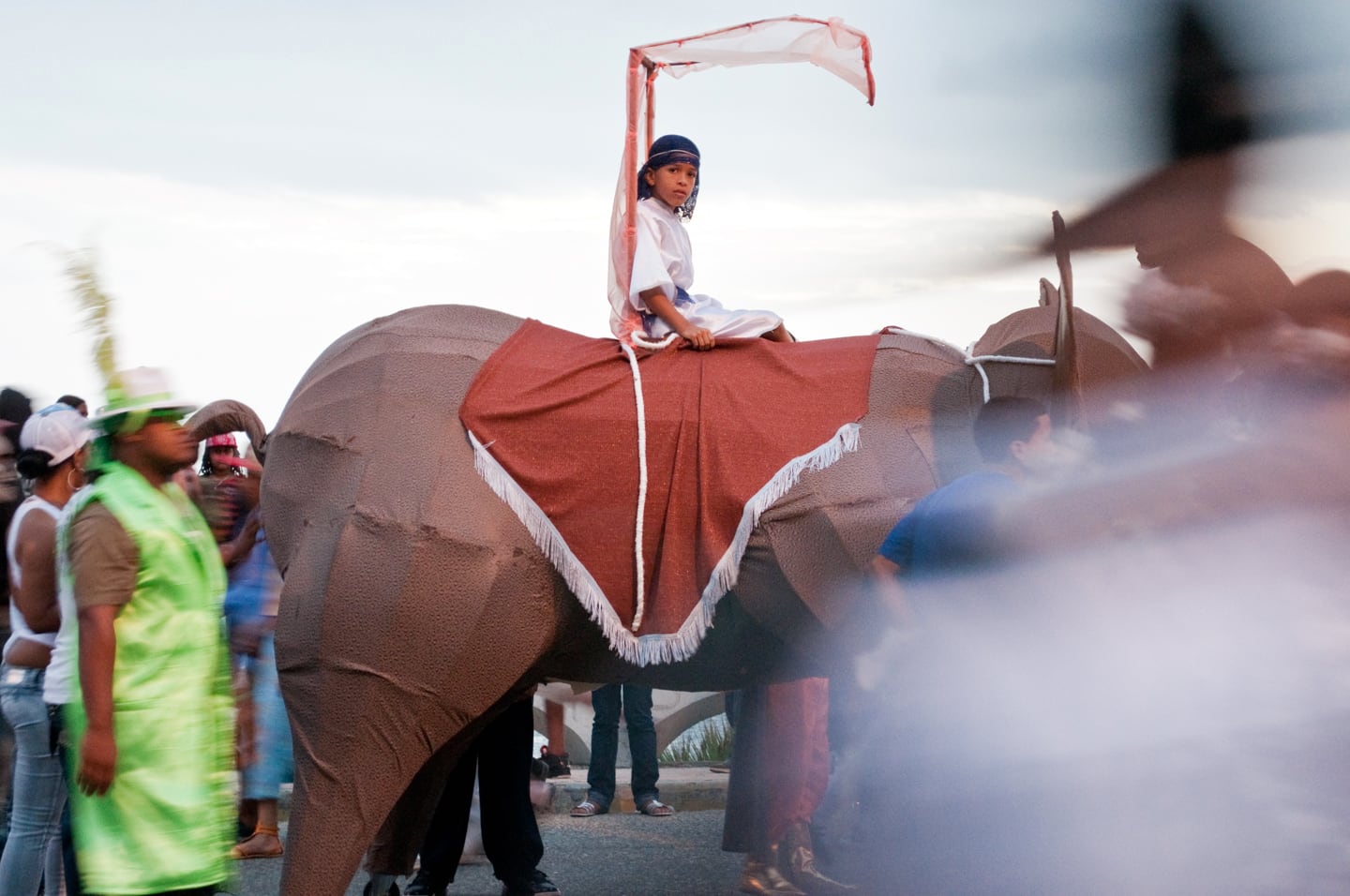 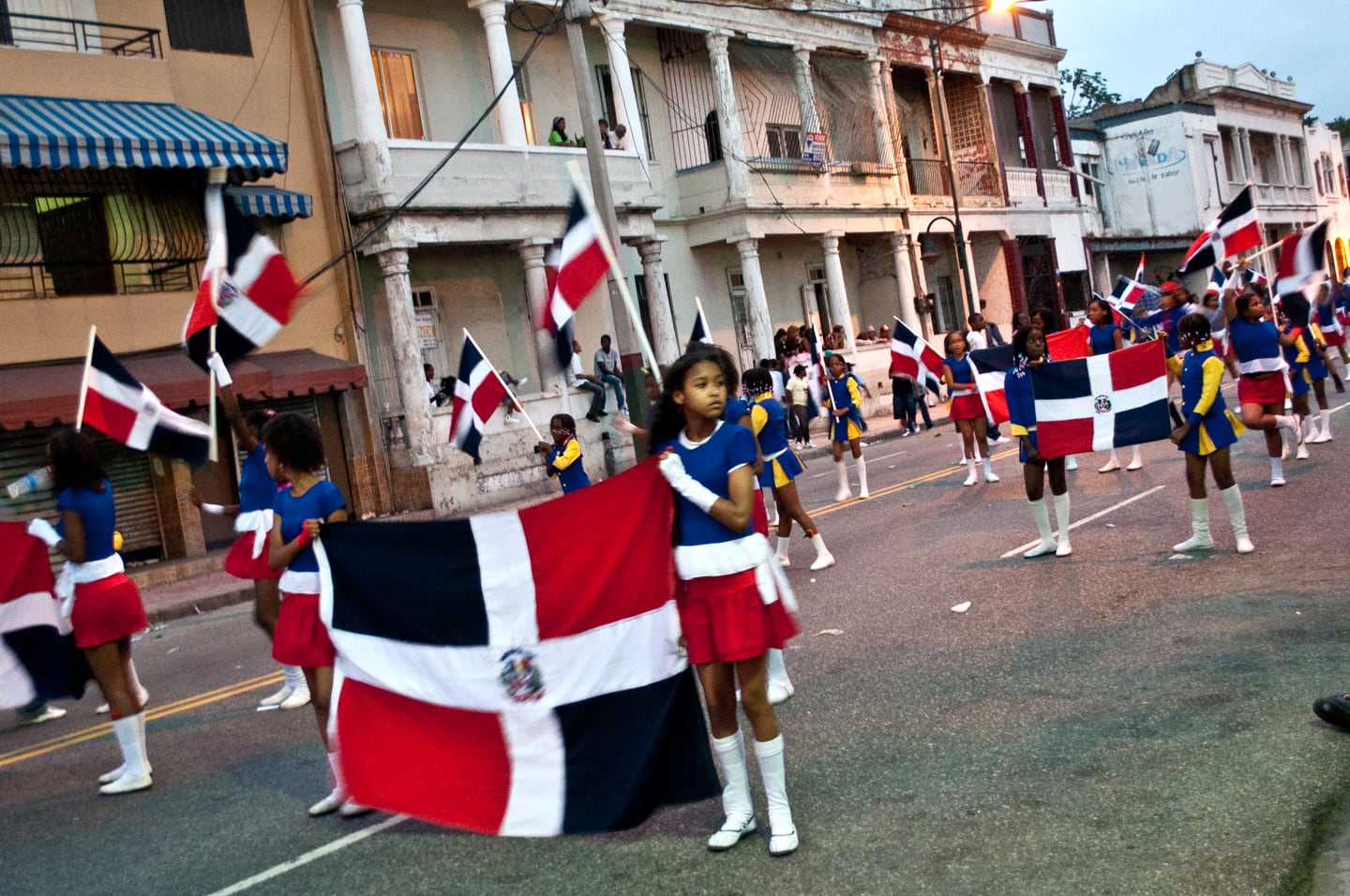 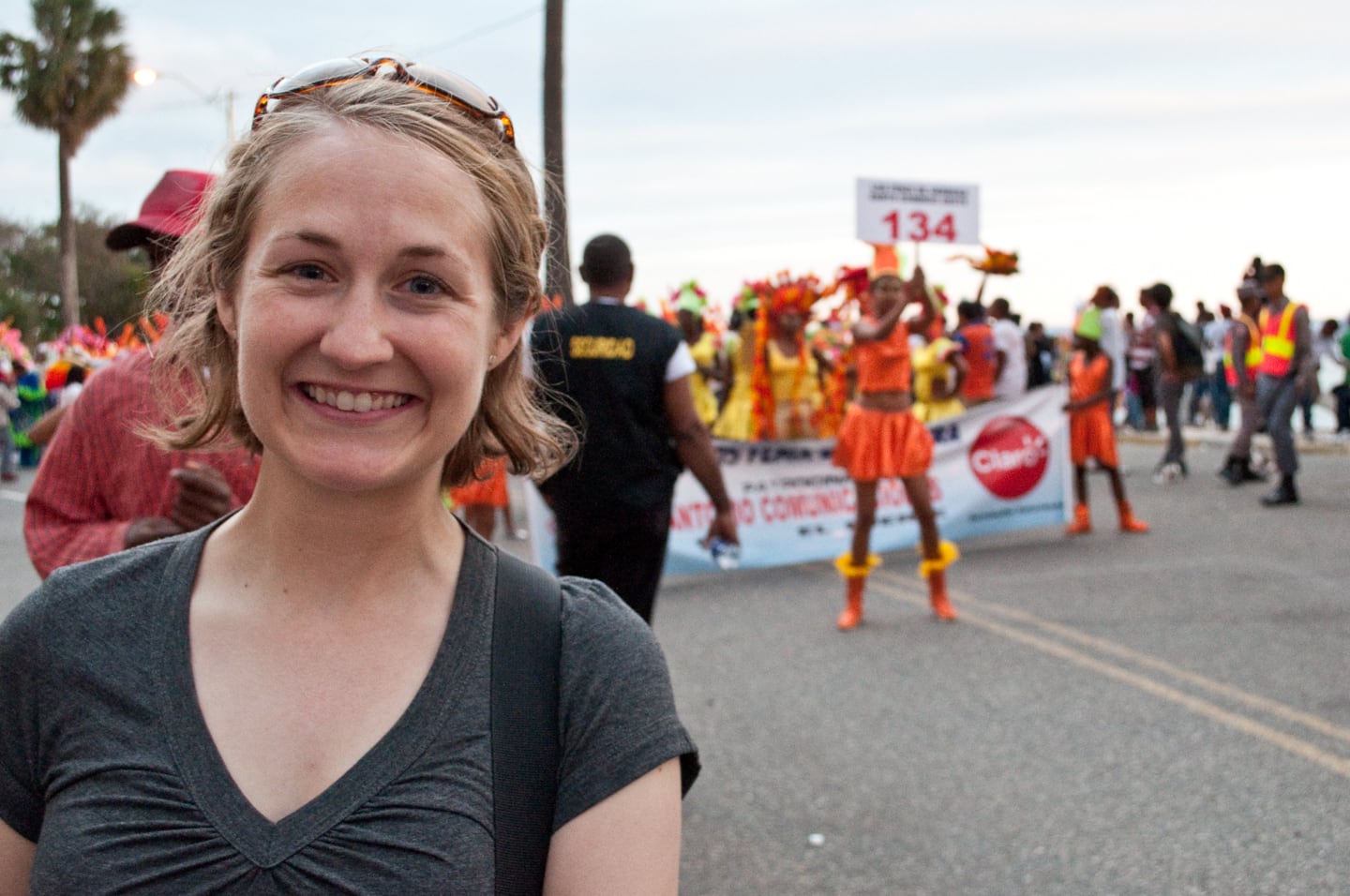 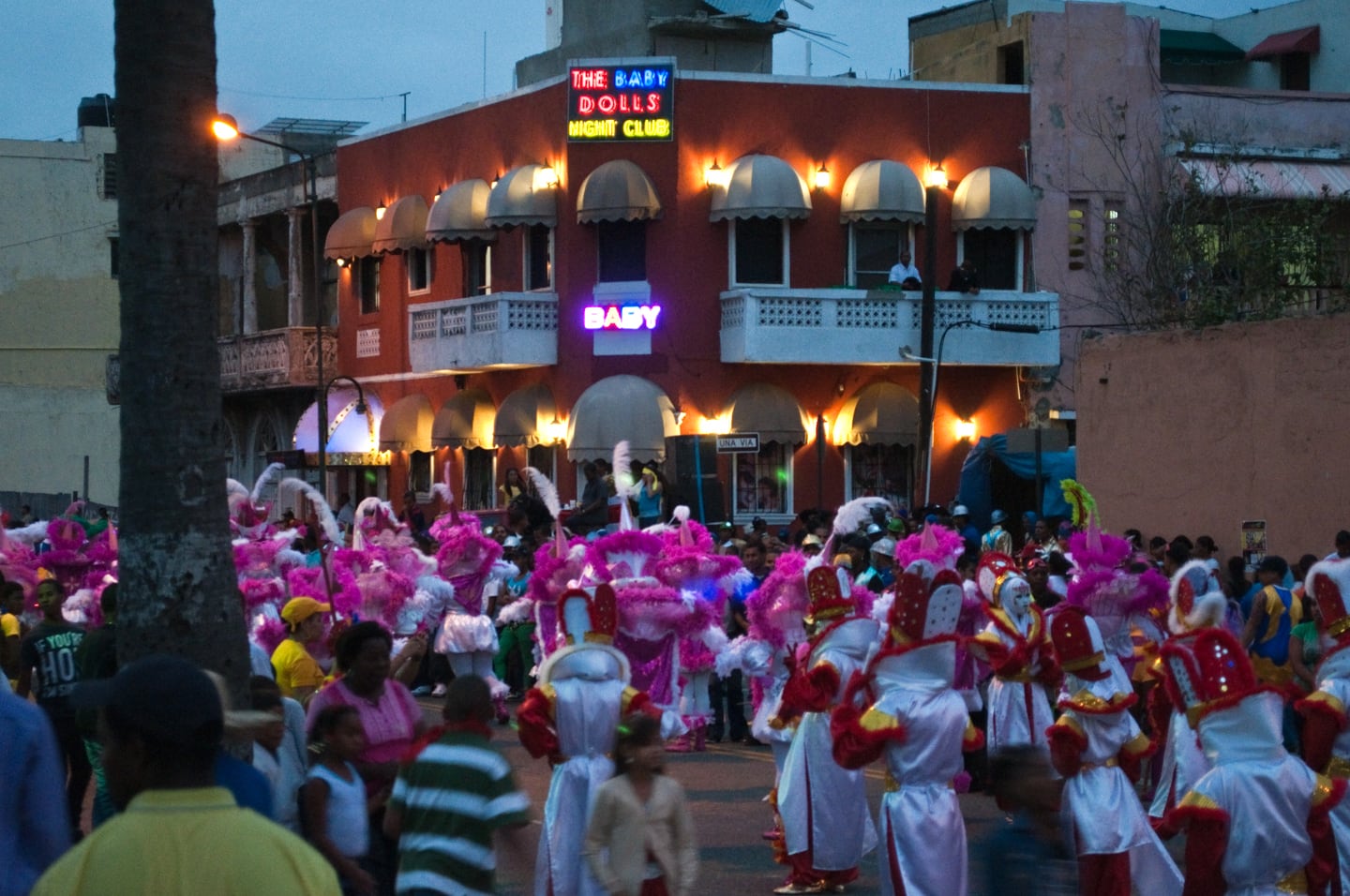 We stayed and watched the parade for several hours until the sun began to set and the crowds started to thin.

Afterwards, we ate at a cool little place overlooking the Caribbean called D’Luis Parrillada. It reminded me of a couple of restaurants in Maputo on Av. Marginal overlooking the Indian Ocean.

While we waited for our food, it had turned a bit breezy, and after an eventful, people-packed day, we had the whole restaurant to ourselves.

And that’s the end of the Dominican Republic’s amazing Carnival…until next year, of course.

Tomorrow, more Santo Domingo. Then, off to the Cordillera Central!

Have You Experienced Dominican Republic Carnival?

What did you think?
Let us know in the comments below.

1 thought on “Cárnival Dominicana: A Guide for Travelers”