Jarabacoa is nestled in the Dominican Republic’s Cordillera Central. We’ve come to visit a friend, hike some waterfalls, and explore a less-traveled part of the country.

High up in the mountains of Hispaniola’s Cordillera Central mountain range is the town of Jarabacoa, city of waterfalls, tranquility, and “Everlasting Spring”.

Lori and I have come to Jarabacoa to visit a friend whom Lori met in Guatemala last year. We are excited to know someone in the central DR who can show us around, introduce to us to some of the locals, and offer us a more authentic travel experience.

And Lori, of course, is excited to chat with her old running buddy. 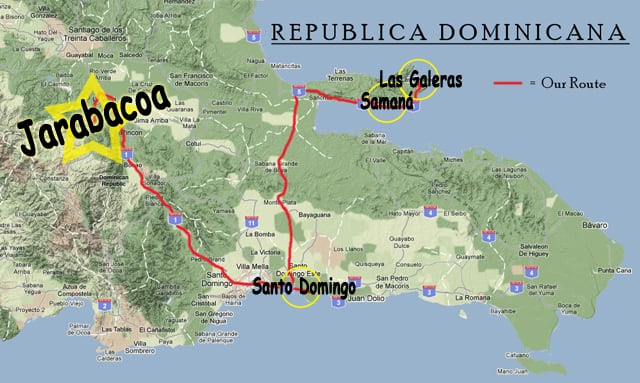 Getting Around Dominican Republic by Express Bus

As you may have gathered from our previous posts from the Dominican Republic, Hispaniola is not a terribly large island, and certainly traveling around the DR portion of it is very manageable in a small amount of time.

It only took us four hours on Caribe Tours (which, contrary to what the name might imply, is not a tour bus at all, but actually an inter-provincial express bus [YAY!]) to get from Santo Domingo to Jarabacoa.

Unfortunately for us, the inter-province bus system in the DR is laid out in a spoke system from the capital, Santo Domingo. So while the buses are fast and efficient for the most part, Lori and I found it frustrating to efficiently travel from city to city in the north.

For example, it would have taken us twice as long to go directly from Jarabacoa to Samaná than it would have to travel back through Santo Domingo (which is over twice the distance between the two towns).

While travel efficiency is not our primary aim, we do appreciate inexpensive means of transport that allow Lori and I to cover greater distances in shorter amounts of time to spend more quality time in fewer, but more diverse, locations during shorter week-long trips like this.

Our Stay in Jarabacoa

Jarabacoa is known as the “City of Everlasting Spring” due to its steady 60°F – 72°F temperature year-round (though it can get quite nippy at night!).

During the Haitian invasion of 1805, survivors from the massacres in nearby Santiago and La Vega escaped to these mountains and settled in the valley of Jarabacoa.

The local economy is based upon strawberries, coffee, pimento and ají pepper.

In Jarabacoa, we stayed at a clean and pleasant place called Hotel Brisas Del Yaque, which means “Breezes of the Yaque” (Yaque del Norte being one of the rivers that runs through town).

Visiting the Dominican Republic?
Check Out These Unforgettable Experiences

Our room had wood floors, a piping hot shower, and a sturdy balcony, which was great for us, but not for the poor naked fellow three stories below who kept peeking his head out of his bathhouse to see if we had gone away yet so that he could run across his backyard and into his house.

At first we thought he was your token creepy tourist stalker, but eventually figured it out (after 20 minutes — of agony for him, I’m sure…), at which point Lori and I retired momentarily to our quarters to give the modest gentleman a chance to privately dash his privates across the fenced-in yard and into his house. We didn’t see his head poke around the corner for the rest of the evening and like to think he finally made it out of there.

We also discovered that Jarabacoa is a tourist magnet in its own right due largely to its proximity to Pico Duarte, the highest mountain peak in all the Caribbean Islands at a very respectable 10,164 ft. (3,098m).

With a rockstar claim like that, it may not surprise you that this measurement is vehemently disputed by Duarte’s rival sister peak, La Pelona, which not only stands at a mere 10,150 ft. (3,094m) but can’t even muster up a Wikipedia page of its own.

Lori and I didn’t climb Pico Duarte (this time) but we did get to see some of the areas other attractions, like a couple of Jarabacoa’s waterfalls. 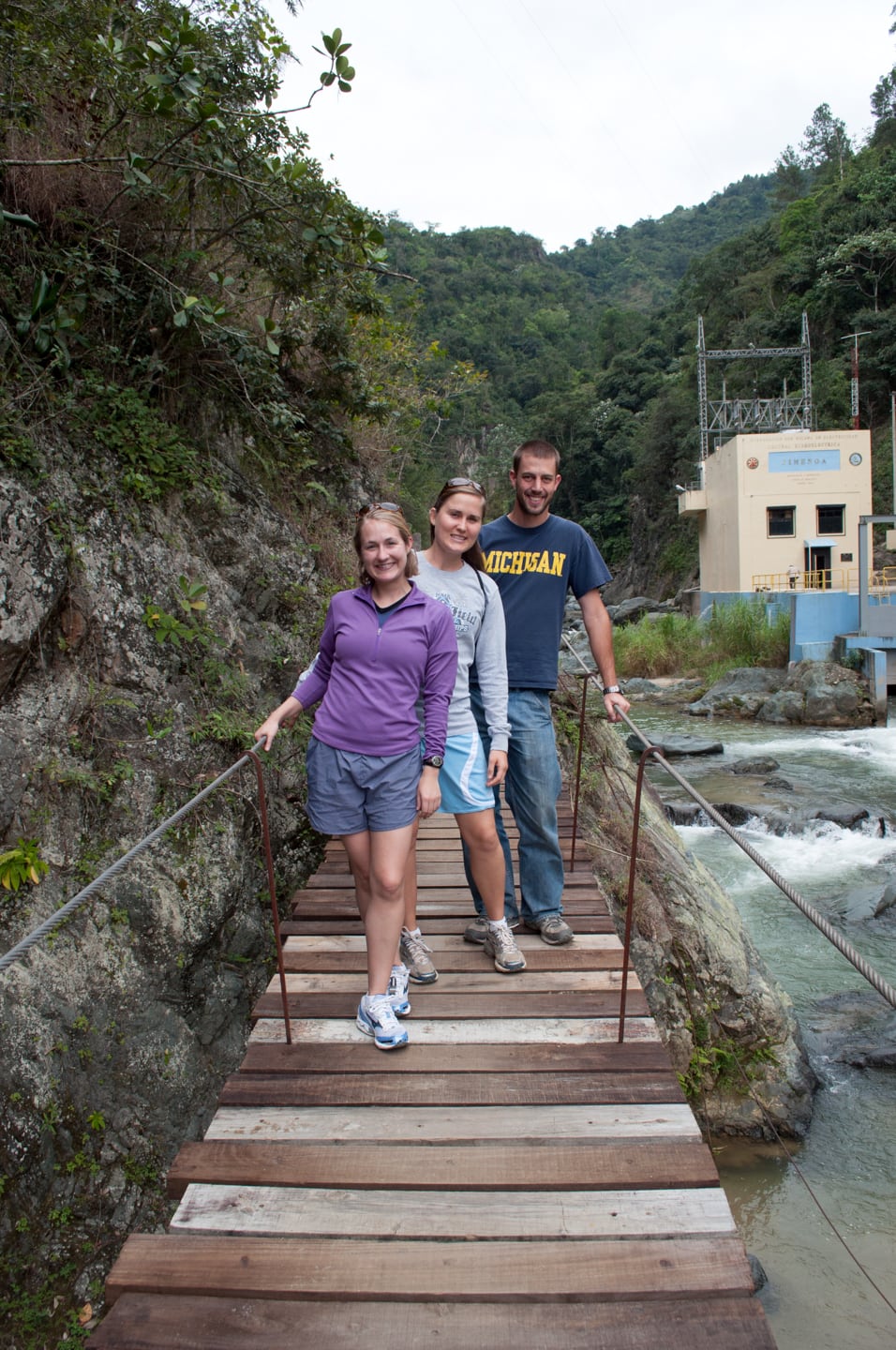 We visited Jimenoa Falls with a couple of frineds living in the area.

Lori and I were surprised to learn that in order to access Jarabacoa’s waterfalls, you have to drop a coin in a turnstile. It’s crazy — almost like you being back in an NYC subway station in the 90’s and then BOOM! — you’re transported into a magical tropical parallel universe where tourists glide effortlessly, alongside fairies and other enchanting jungle critters, over rickety wooden suspension bridges, and above boulders and rushing rapids.

There weren’t actually any fairies, nor were there any playful monkeys or rambunctious flying squirrels to welcome us but the place was still very much worth a visit. 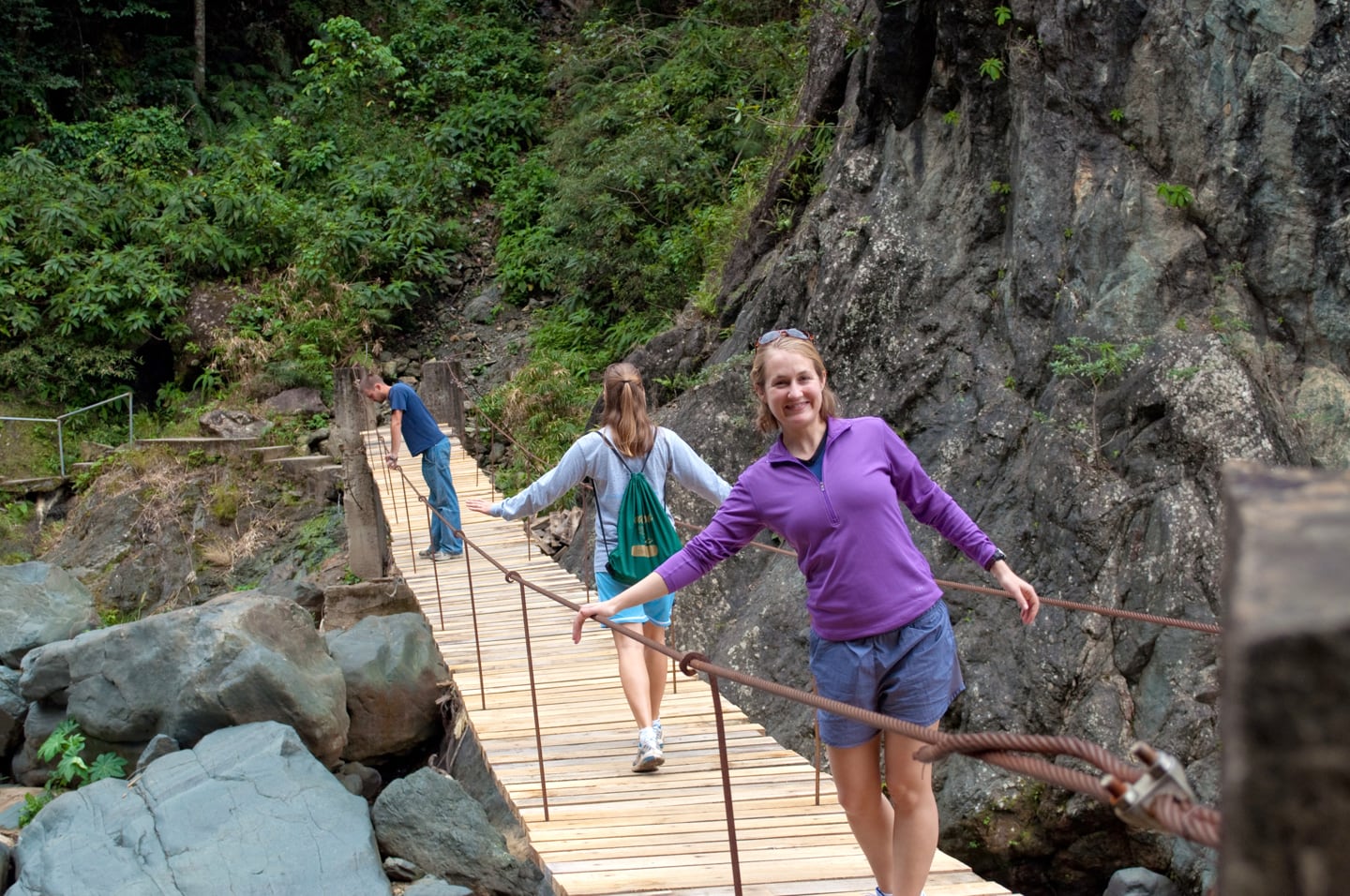 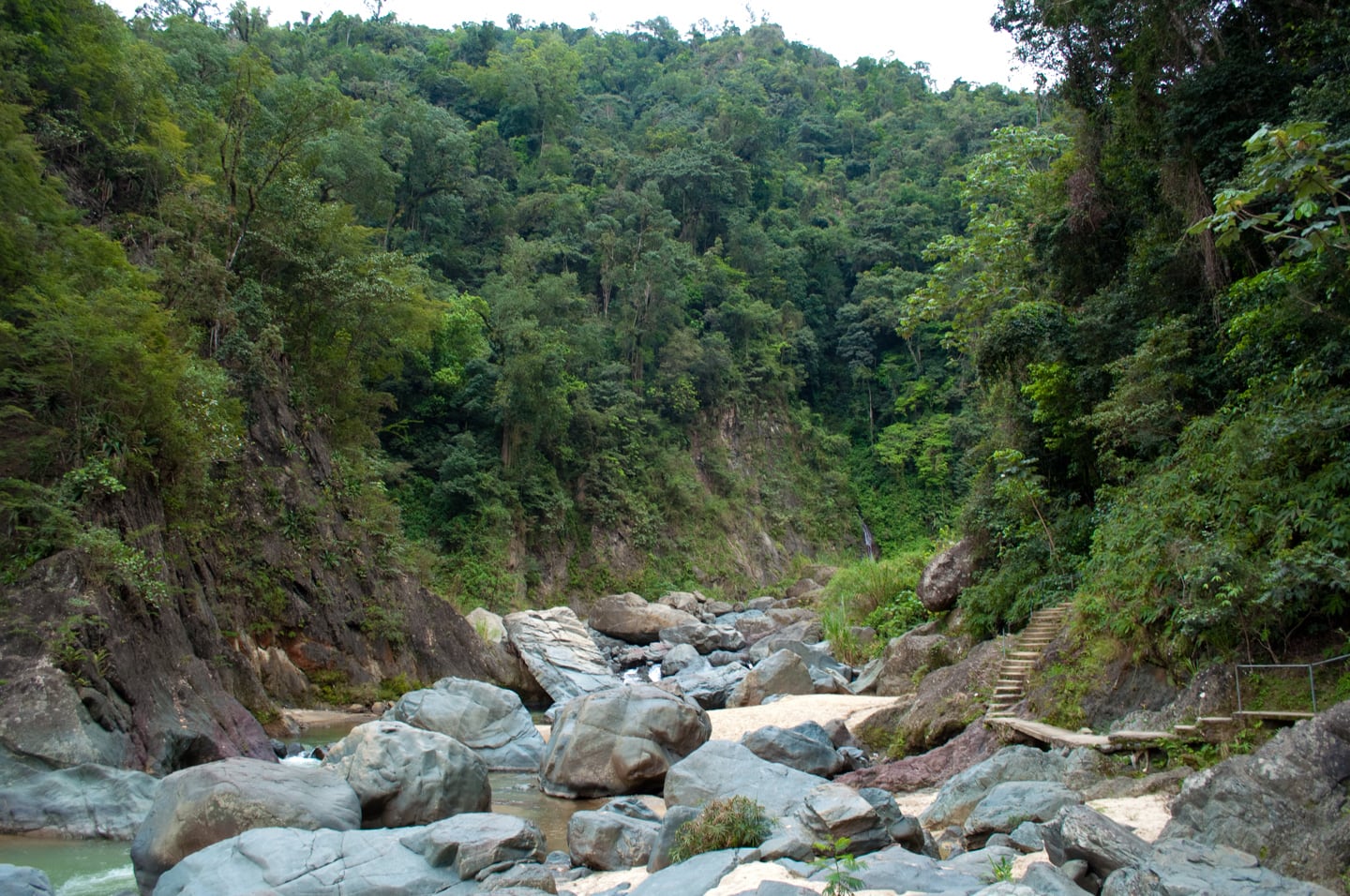 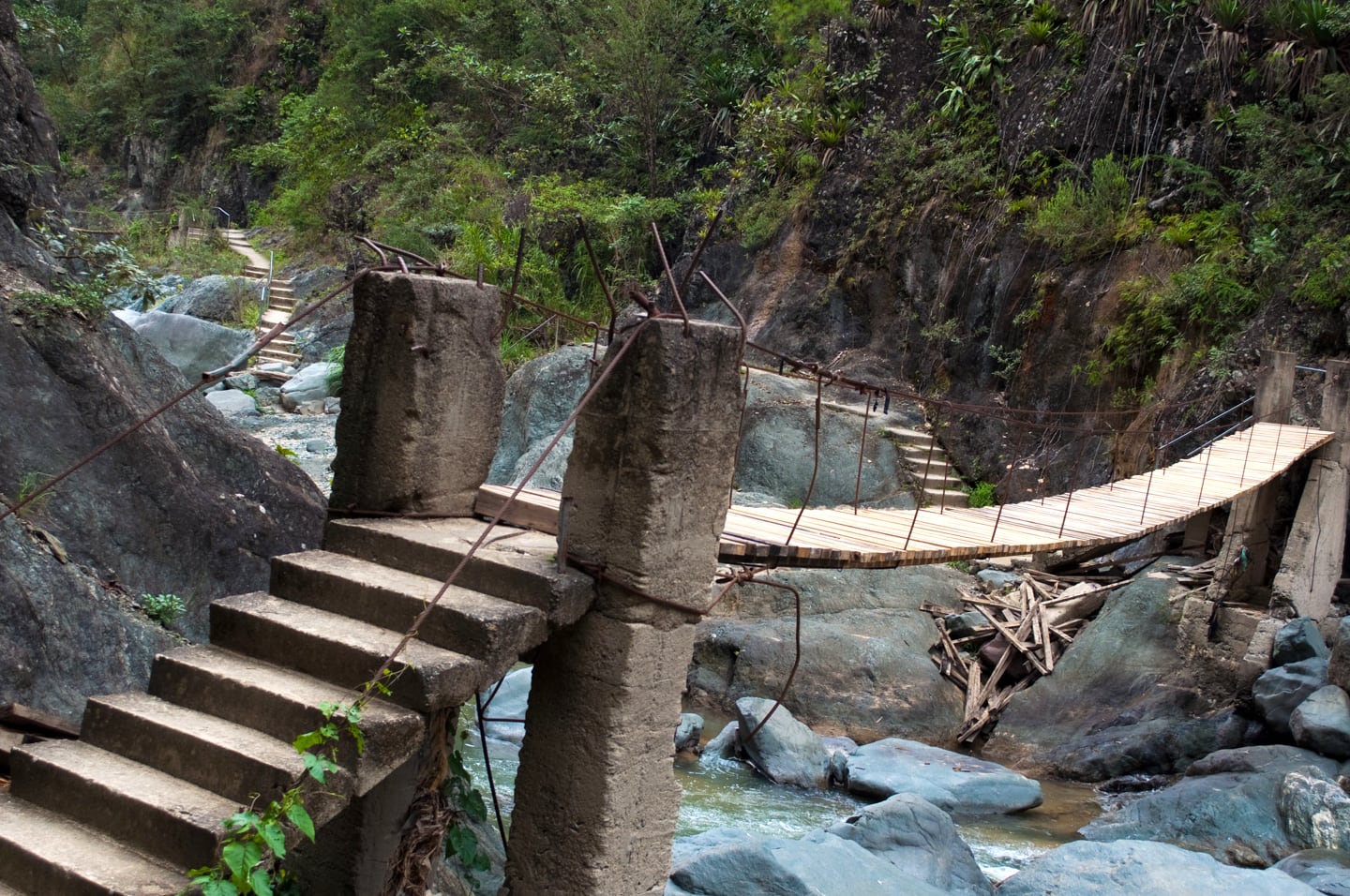 Alright, so the half-finished staircase and pieces of bridge kindling strewn about don’t exactly scream MAGICAL, but they also don’t inspire confidence, which of course spells intrigue and ADVENTURE! 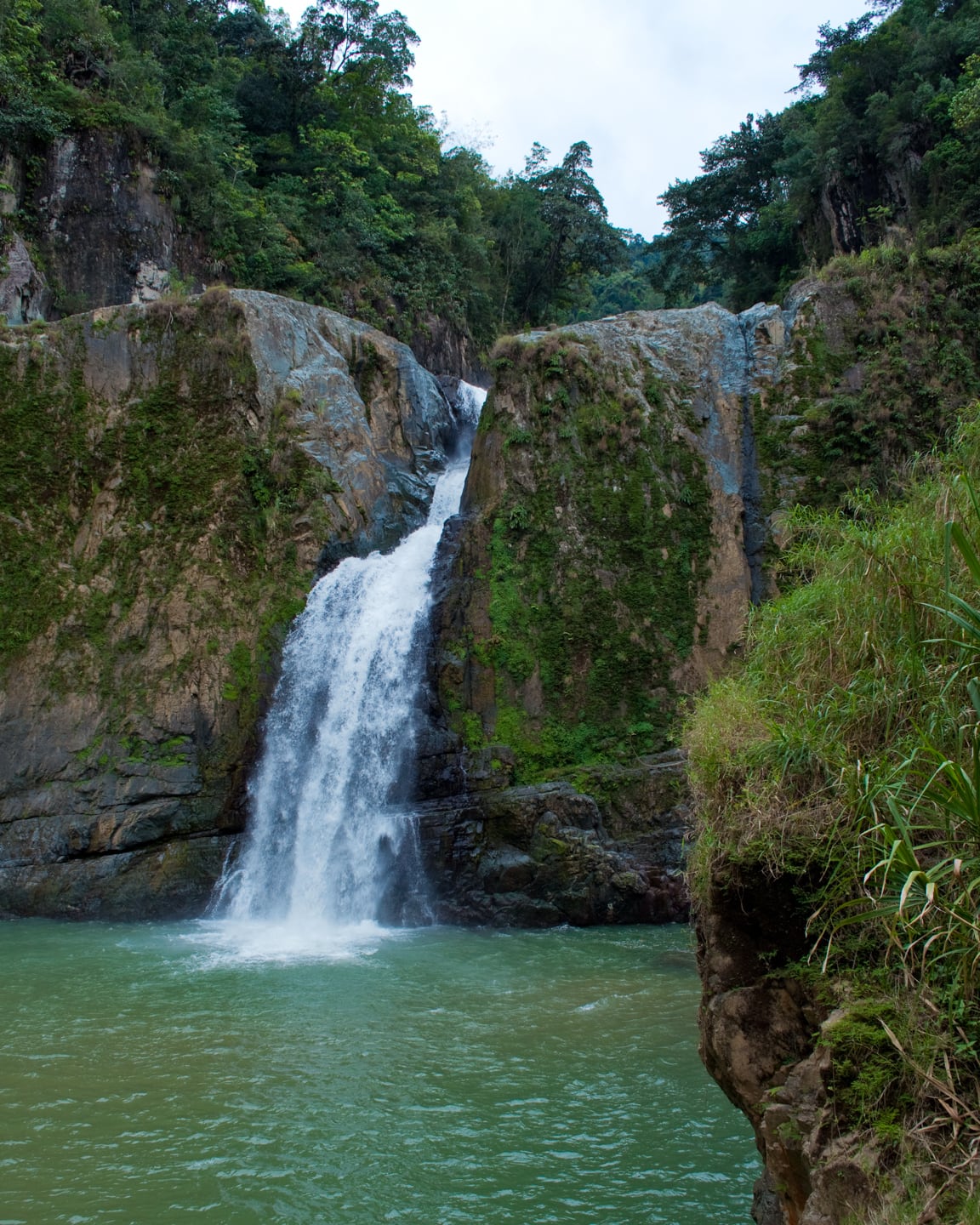 BEHOLD! The pristine majesty of Jimenoa Falls (pronounced HeemmaynOah FAHllz for all you non-native speakers out there).

Is that an enchanted monkey frolicking in the mist!? You decide.

The sign reads: “Bathing prohibited in this area,” which is totally fine as none of us were planning on taking a bath on the viewing platform anyway. Now who’s up for a swim!? 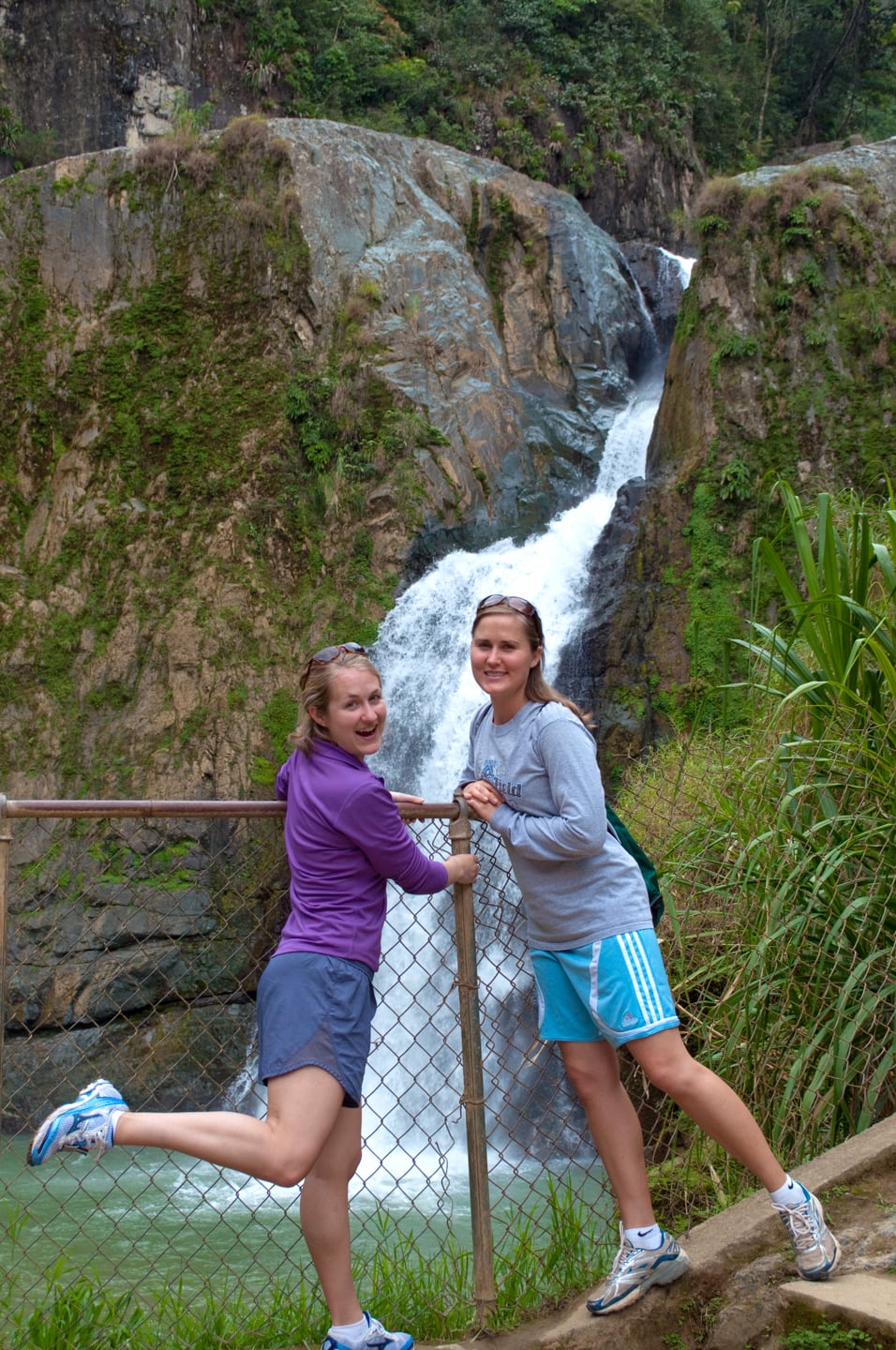 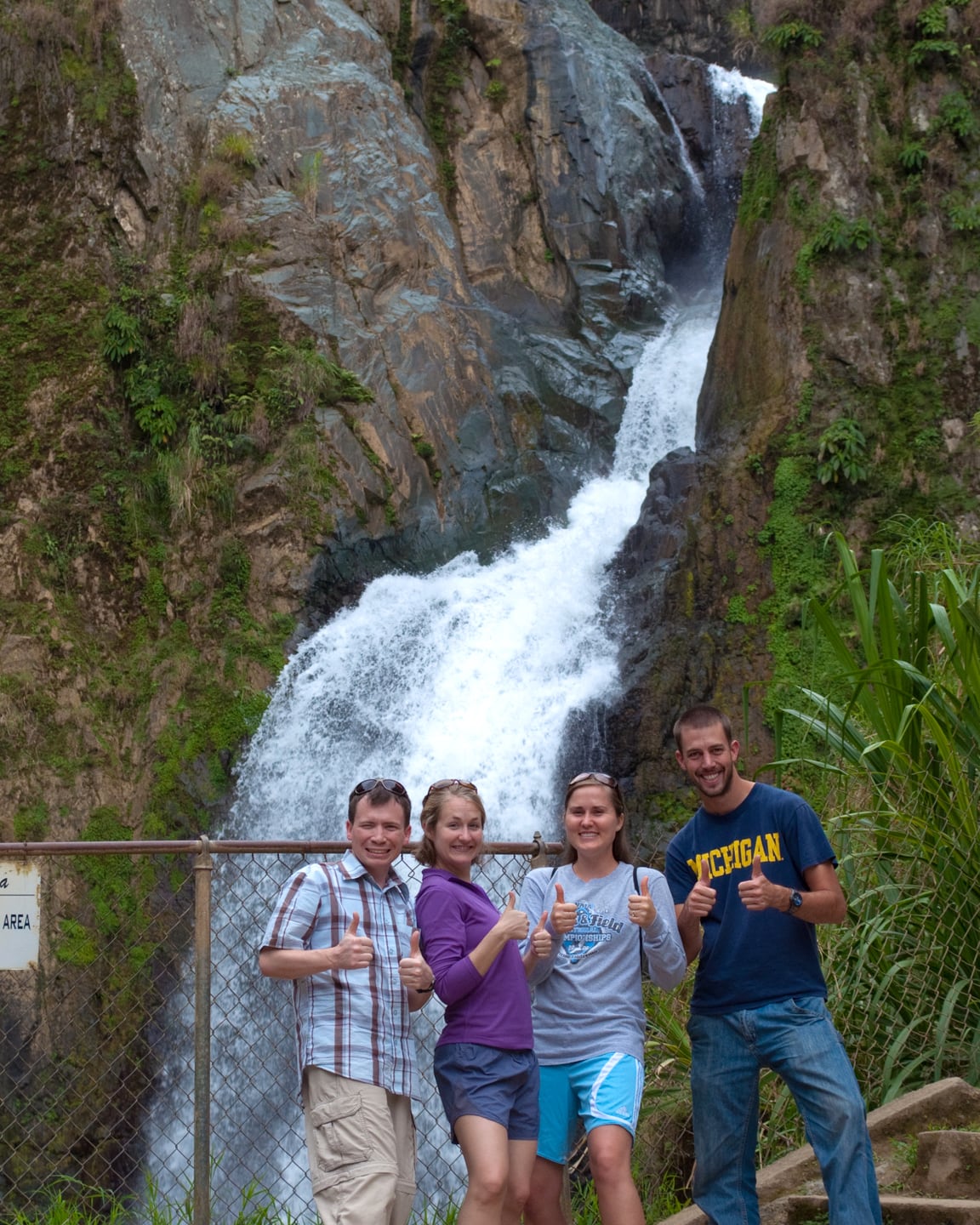 Eat your heart out, Pico Duarte! 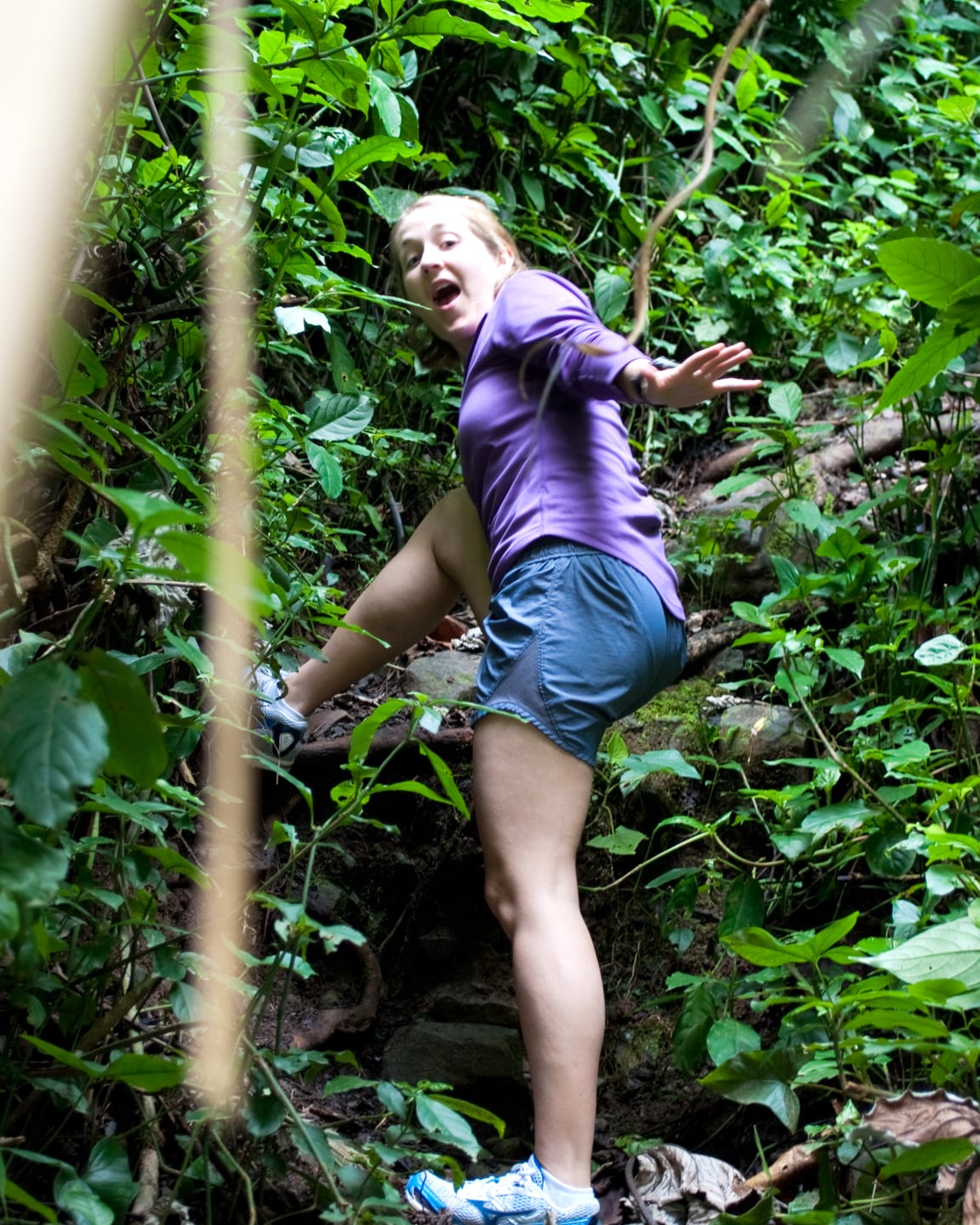 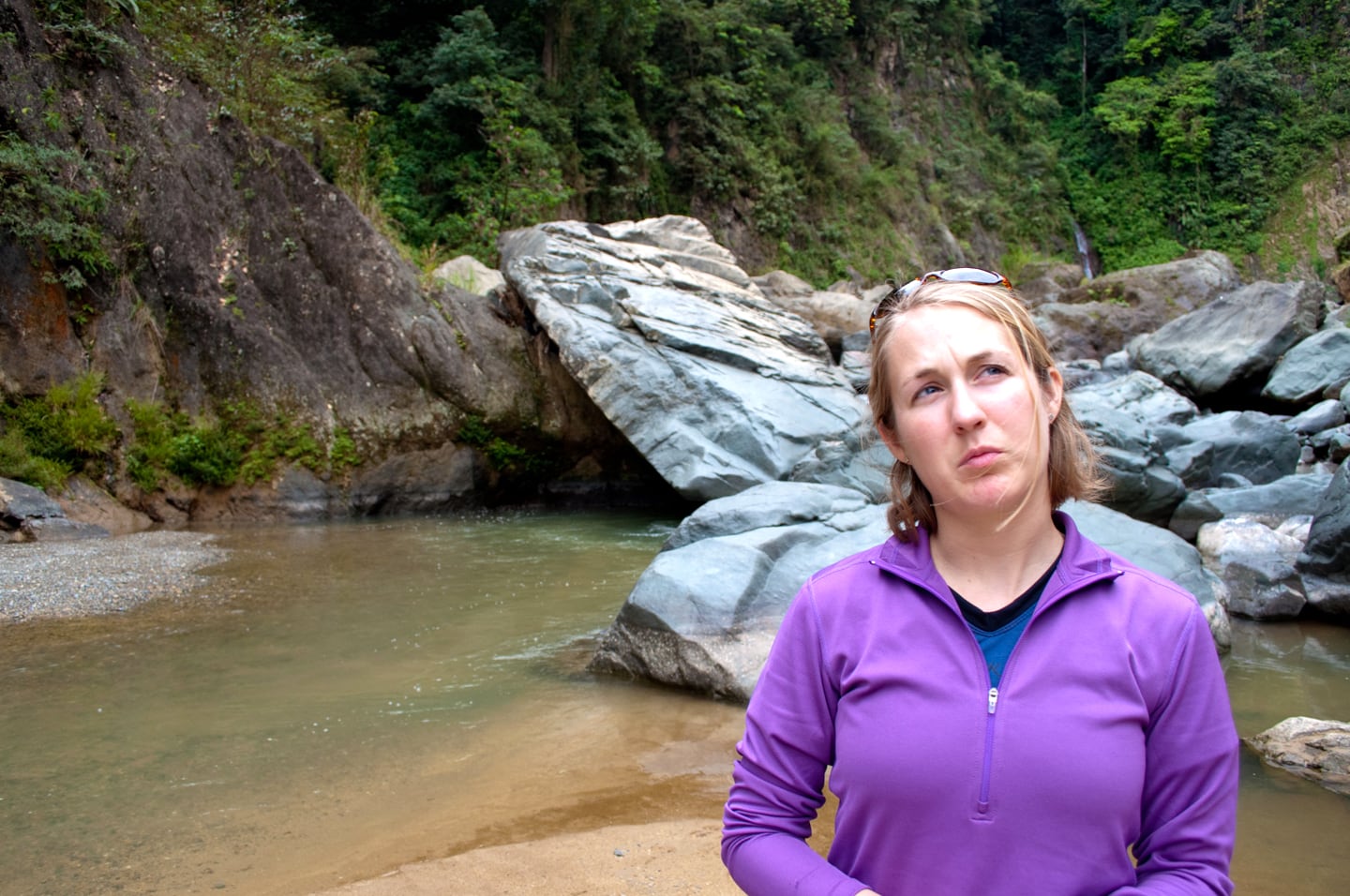 What are you staring at, Lori? 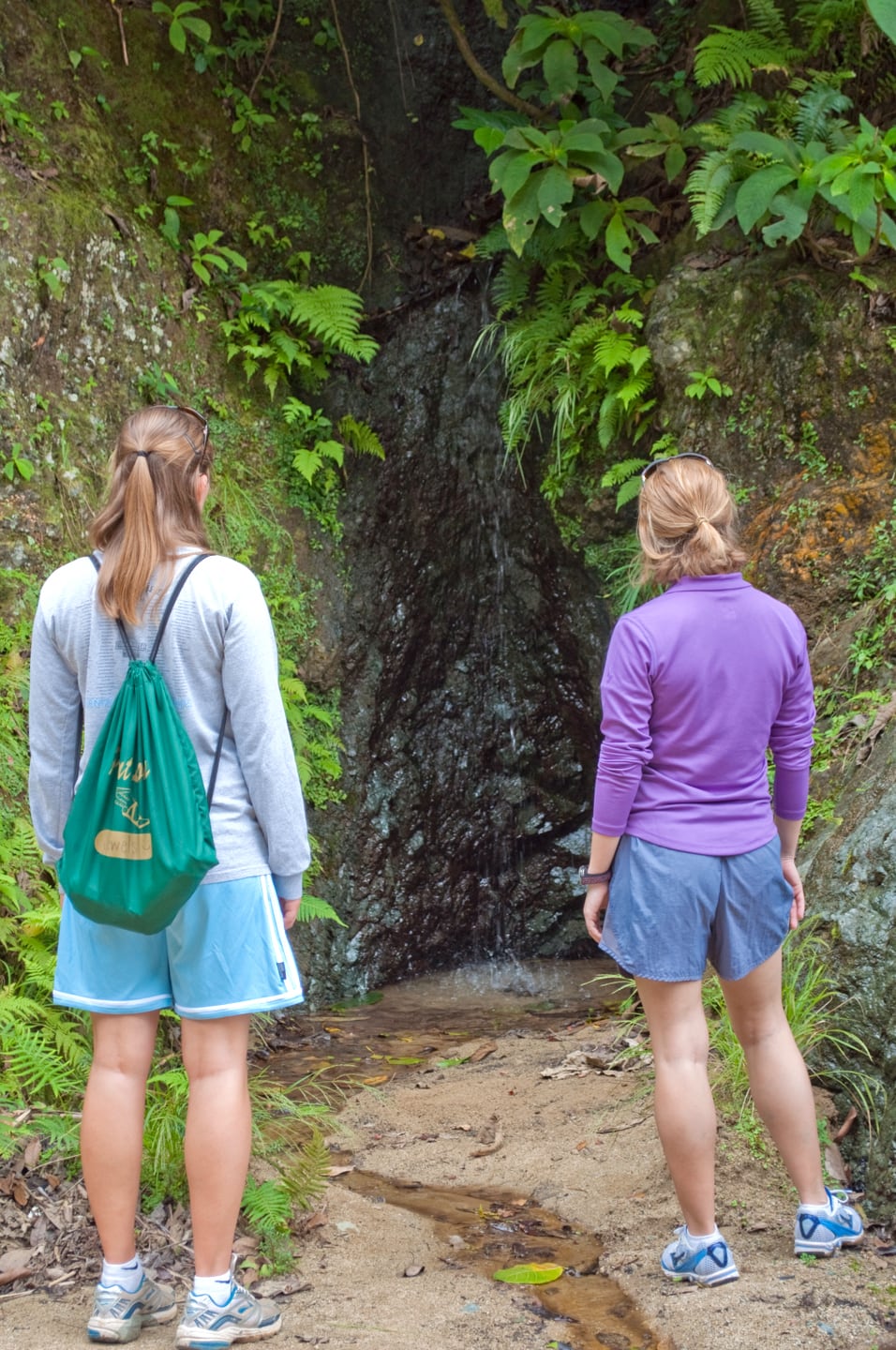 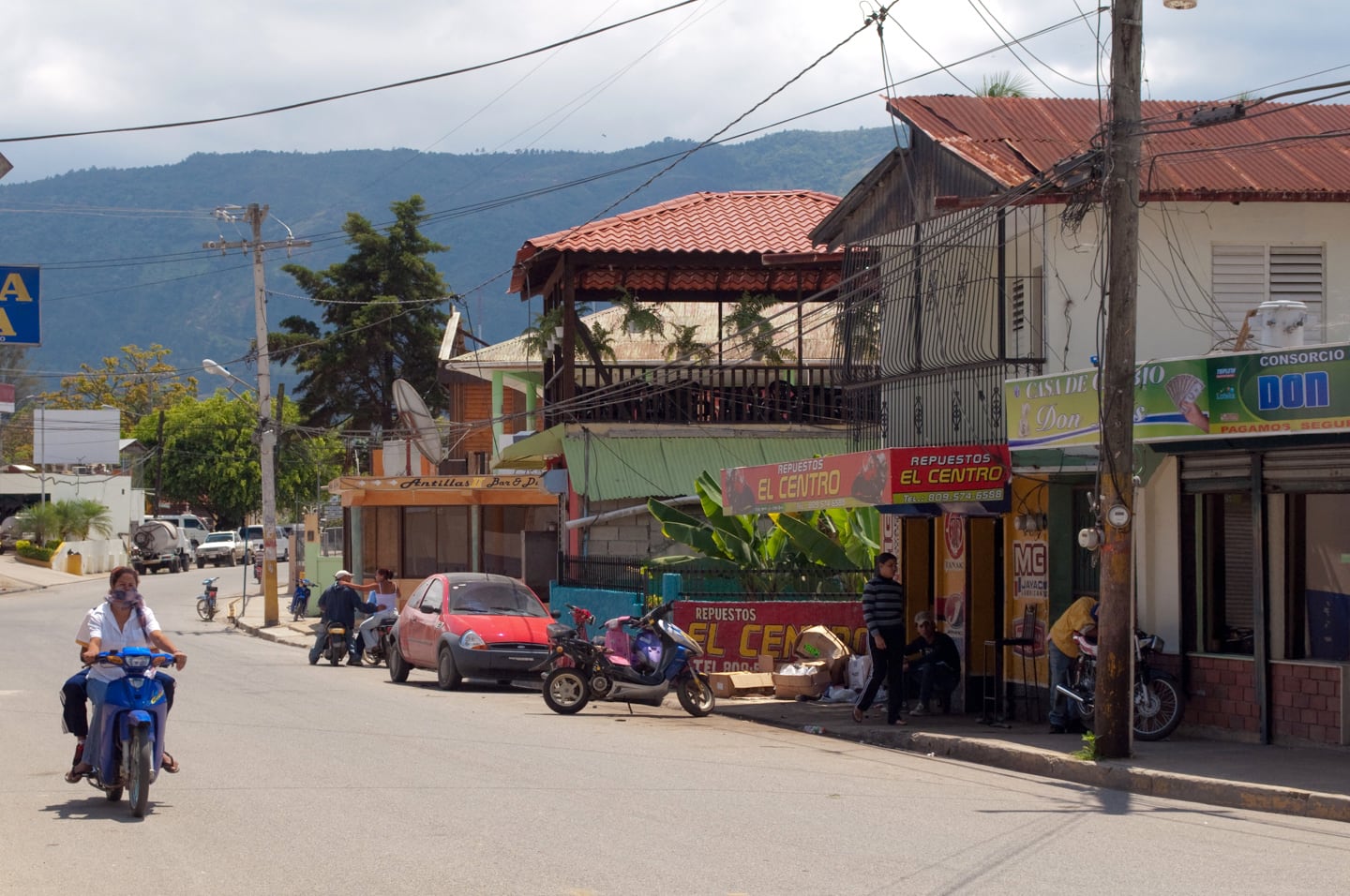 Back in Jarabacoa, searching for beer, we barely miss getting run down by the masked-blue-scooter-avengerista (pictured above) who zooms by only METERS from our toes! 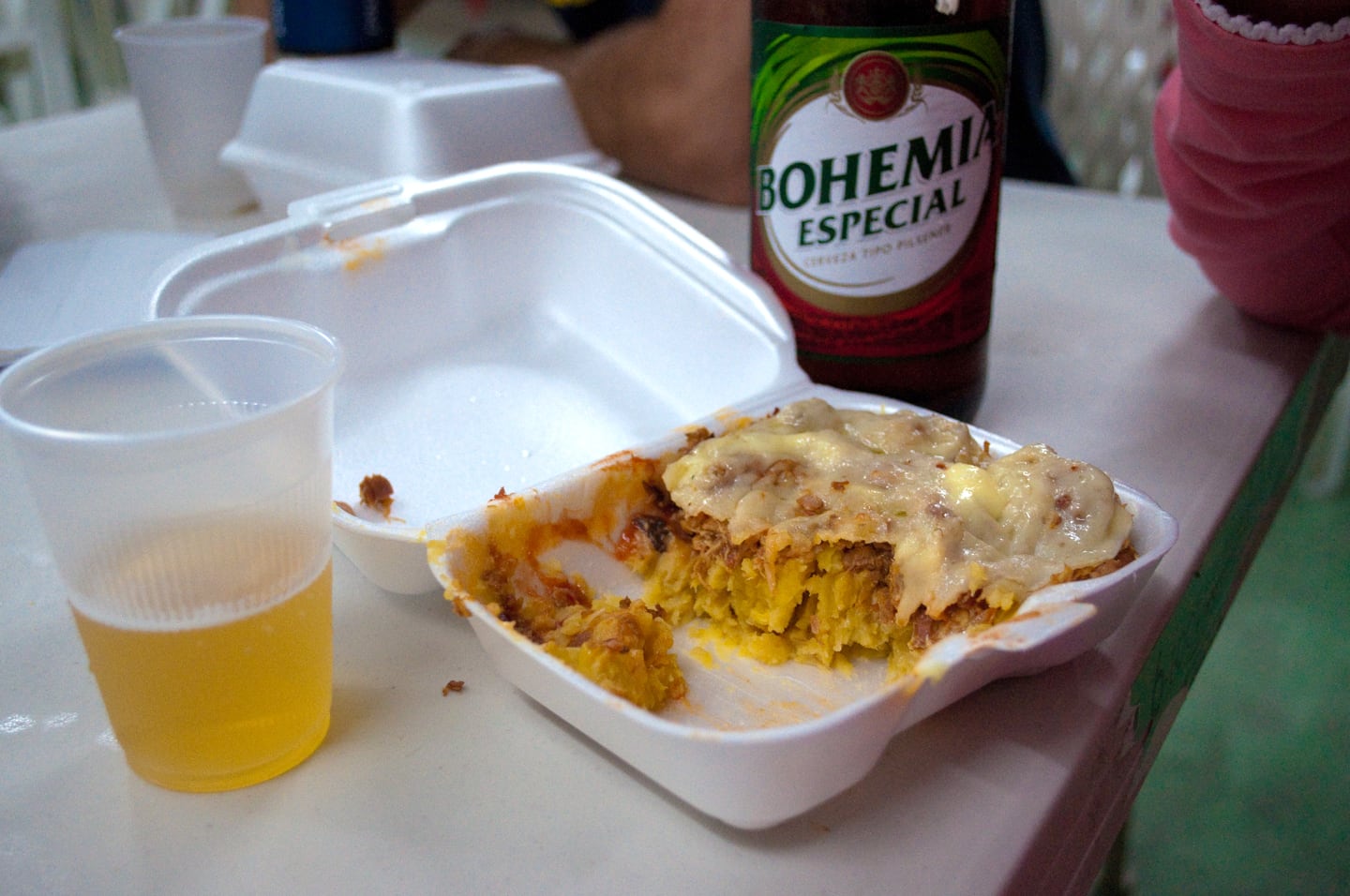 After a fun-filled day of hanging out in Julie-Anne’s classroom, poking around graveyards, and hiking Jarabacoa’s waterfalls, Julie-Anne and her crew take us to a great local polleria (chicken joint) to devour some fantastic grub, the name of which escapes me (yet the memories of deliciousness remain).

We wash down our meal with a couple bottles of Bohemia Especial (not to be confused with the Bohemia brand of beers brewed in Mexico and Brazil, nope, this one’s 100% pure Dominicana…that is until its bought out by international beer giant, InBev, as it most certainly will…) 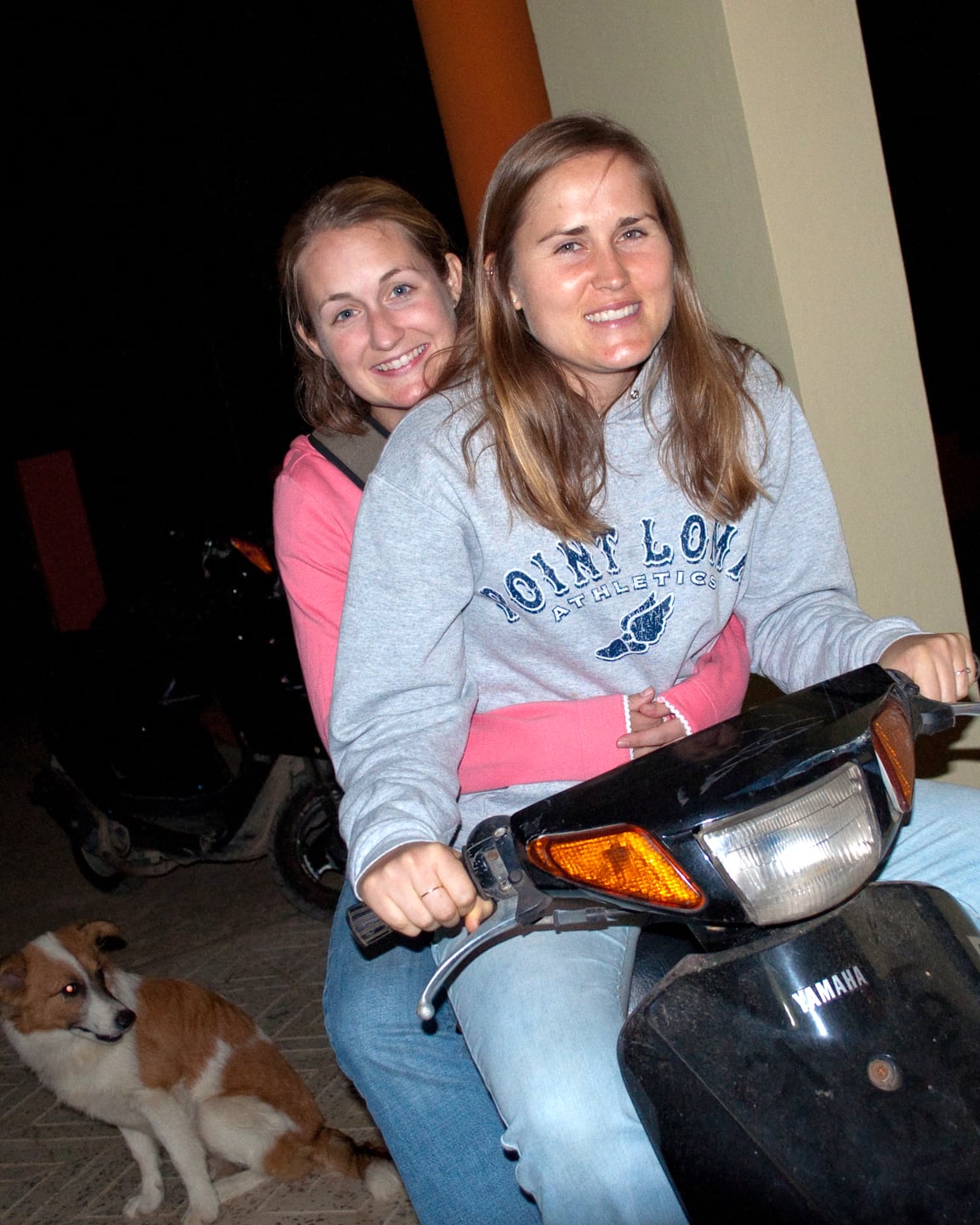 Lori and I leave early tomorrow bound for sand and surf on the Samaná Peninsula by-way-of Santo Domingo, of course. 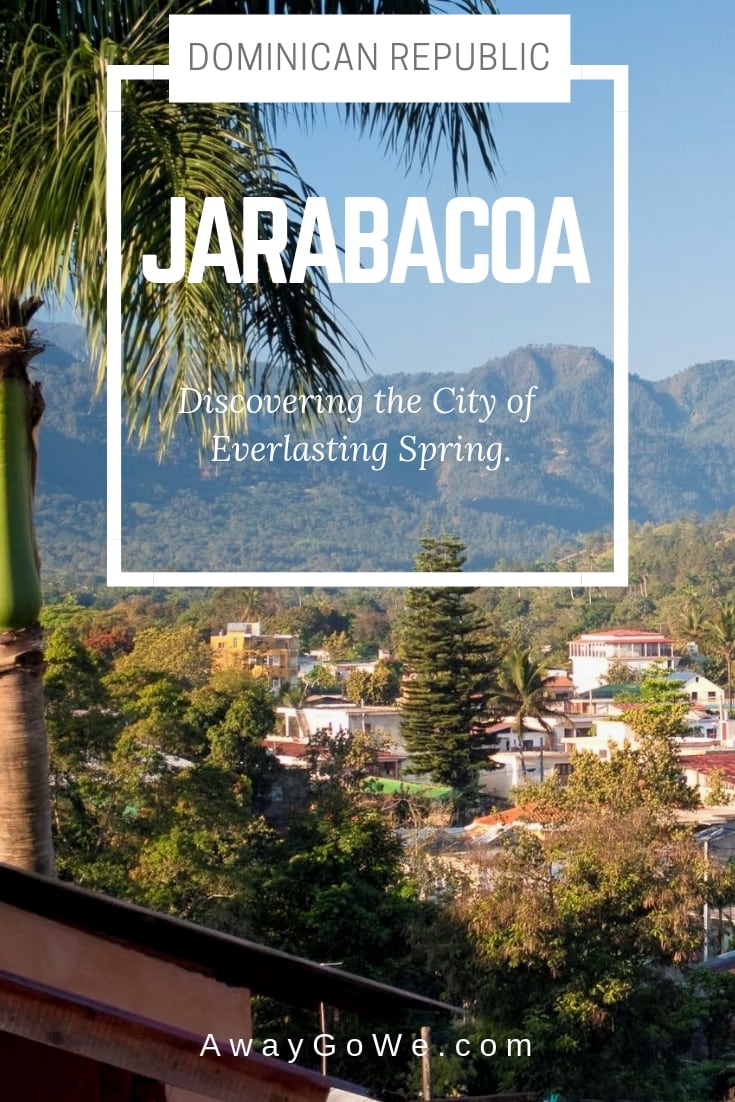 Great fun! Thanks for sharing.

Great post! and pictures 🙂 and the place we ate at is called “Yaroa”