Beautiful Lake Bunyonyi serves as the final stop in a whirlwind 48-day journey around Uganda.

At the end of a 48-day journey to nearly every corner of Uganda, we sequestered ourselves at Byoona Amagara Lodge on a tiny island in the middle of a large lake for the purposes of analyzing boatloads of data and writing a couple field reports. By that time, we had spent a combined 19 nights in Kampala and were eager to be working anywhere other than a hotel room in the capital city.

Via the miracle that is 21st century technology, we were able to bring our work to this remote corner of Uganda armed with laptops, USB modems, a faint but adequate cell tower signal, and enough electricity in the evening to charge our gear.

If you’ve got to work, you’d be hard pressed to find a better office.

For a recap of what brought me to Uganda in the first place, read the Uganda Assignment.

It wasn’t all that difficult to get to Byoona Amagara, but there were multiple steps involved.

We took the trusty Post Bus from Kampala to Kabale for a cool 20,000 shillings each (US$7.60)…and a small piece of our souls. If you’re ever in the market for an incredibly depressing movie, check out “Darkness of Sorrow.” Most…depressing…movie…ever. How does it end, you ask? Not to spoil it for you but pretty much after two hours of investing in an array of characters and an interesting telenovela style plot, everybody dies…immediately followed by the words “God be the Glory!” and then black. Leave it to Ugandan filmmakers, and the Post Bus, for depositing us in paradise traumatized.

In Kabale, we made our way to the field where the taxis gather and found one to take us to the dock at Rutindo. This would have been much easier if we had gone with any number of drivers yelling at us as we got off the bus. But instead, we decided to grab a little lunch first in Kabale and get a cab later. By the time we made it back to the bus stop, however, all the taxis had dispersed. We asked around for a while until we were directed to a dusty lot down the road where drivers usually hang out. The taxi cost 25,000 USh for the two of us.

From the dock at Rutindo, a boatman sent from Byoona Amagara was awaiting us (boat ride was included, I believe). Within minutes we were off the dock and on our way, passing a village with a particularly large market (though it looked as if we had missed most of the action as people were packing it in for the night).

We motored down one finger of the lake, around a few small islands and a much larger one until our island retreat came into focus!

In all from Kampala, 8 hours on the Post Bus, 25 minutes in a private hire taxi and 15 minutes on a boat ride to paradise! 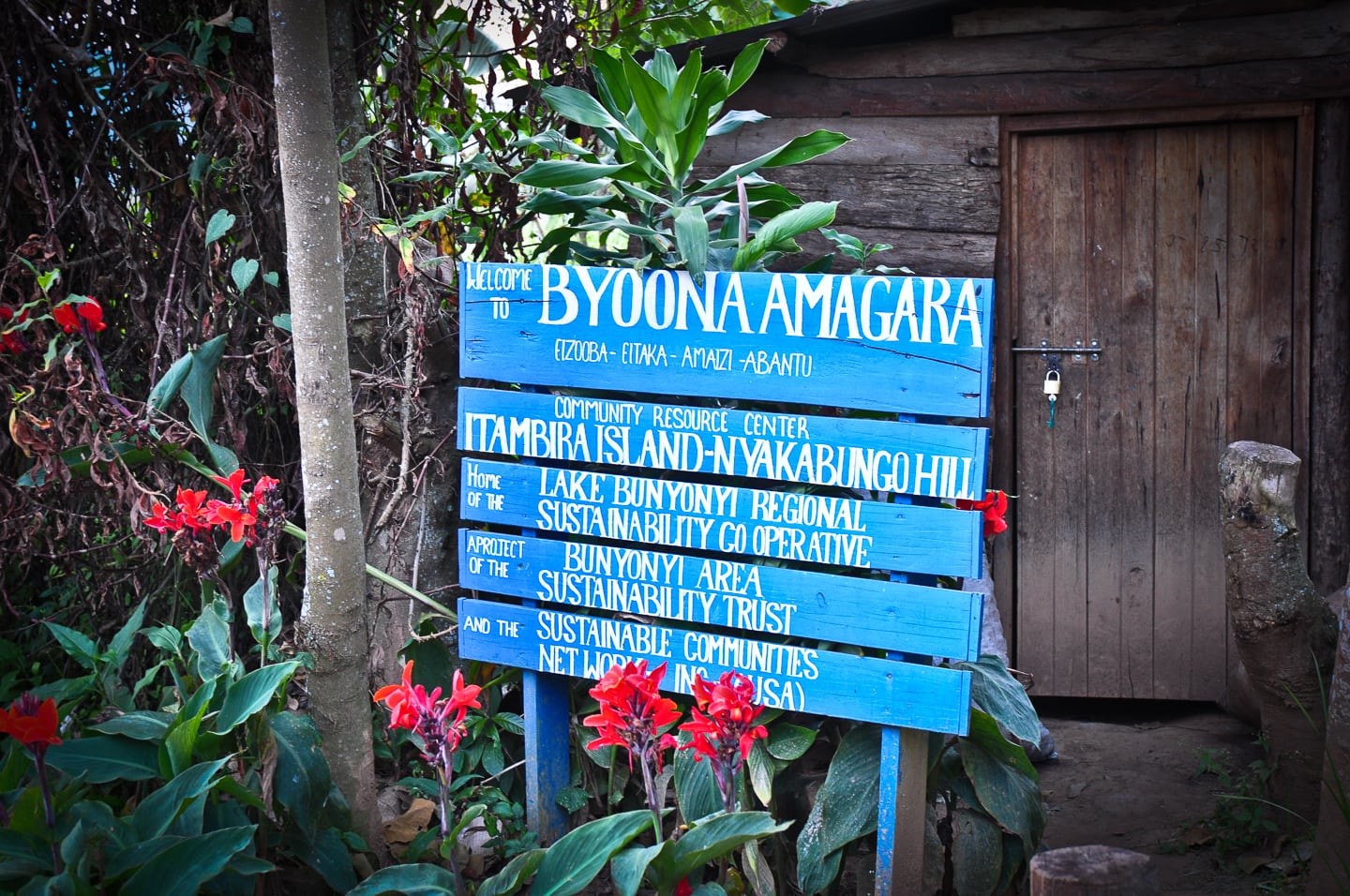 Rather than me try and re-summarize a perfectly fine summary of the place, here’s the lodge in its own words from their website:

“Byoona Amagara Island Retreat is a traveler’s paradise located at Lake Bunyonyi in the southwest of Uganda. Situated on a peninsula alongside a protected cove at the heart of the stunning and serene island-studded lake, we cater to independent and budget travelers looking for serious relaxation, gorgeous views, unique accommodations and delicious food, all at the most affordable prices in the region.

“While tranquility and relaxation in a beautiful island setting is our main attraction, there is also plenty to do… from island-hopping by canoe, to trekking through the hills and villages around the lake, to birdwatching the 150+ species found here, or visiting various scenic and cultural hotspots of the area – either guided or unguided, or just swimming and hiking at the island itself… you will not be at a loss for a pleasurable activity when you are ready.” 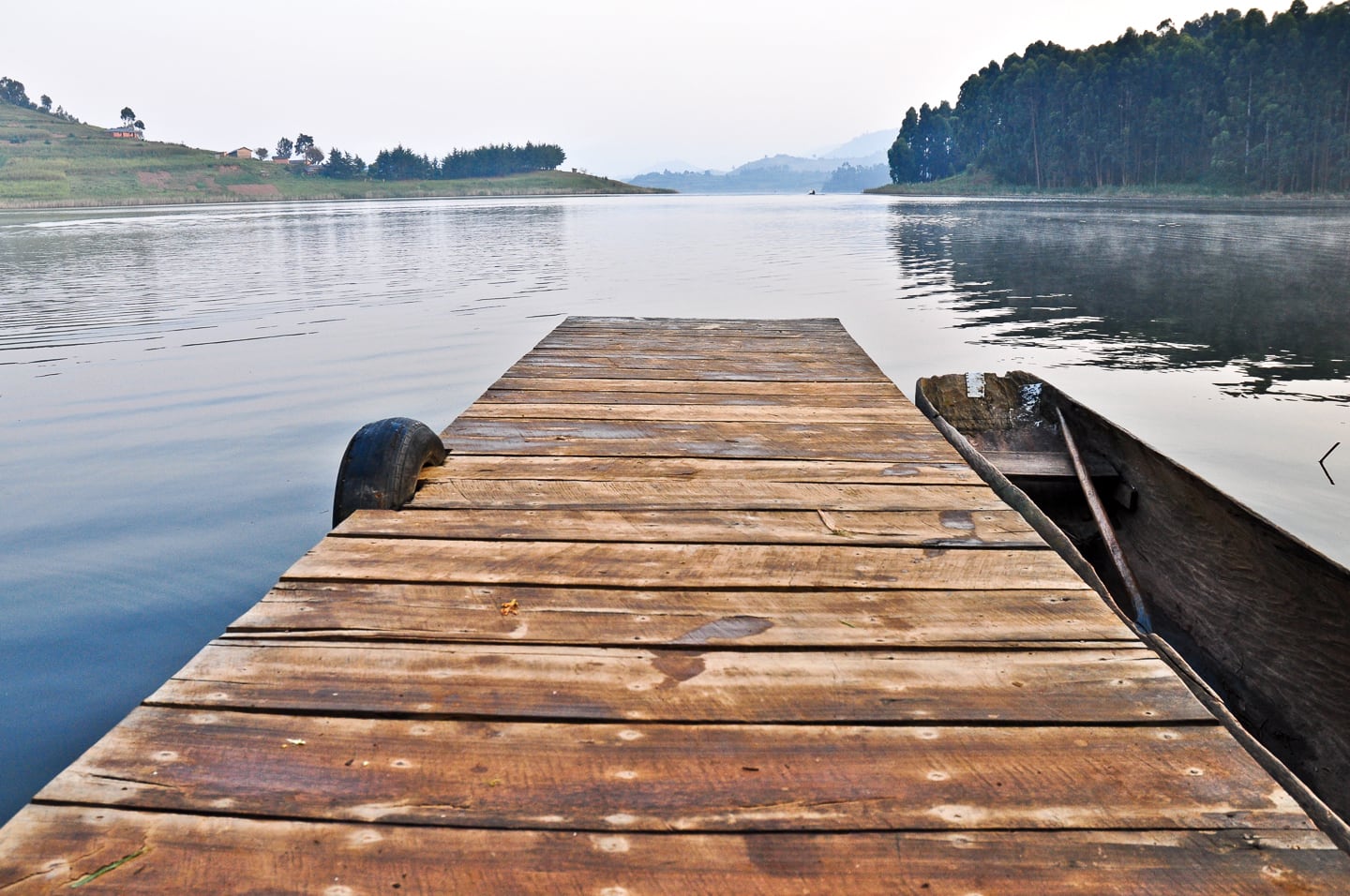 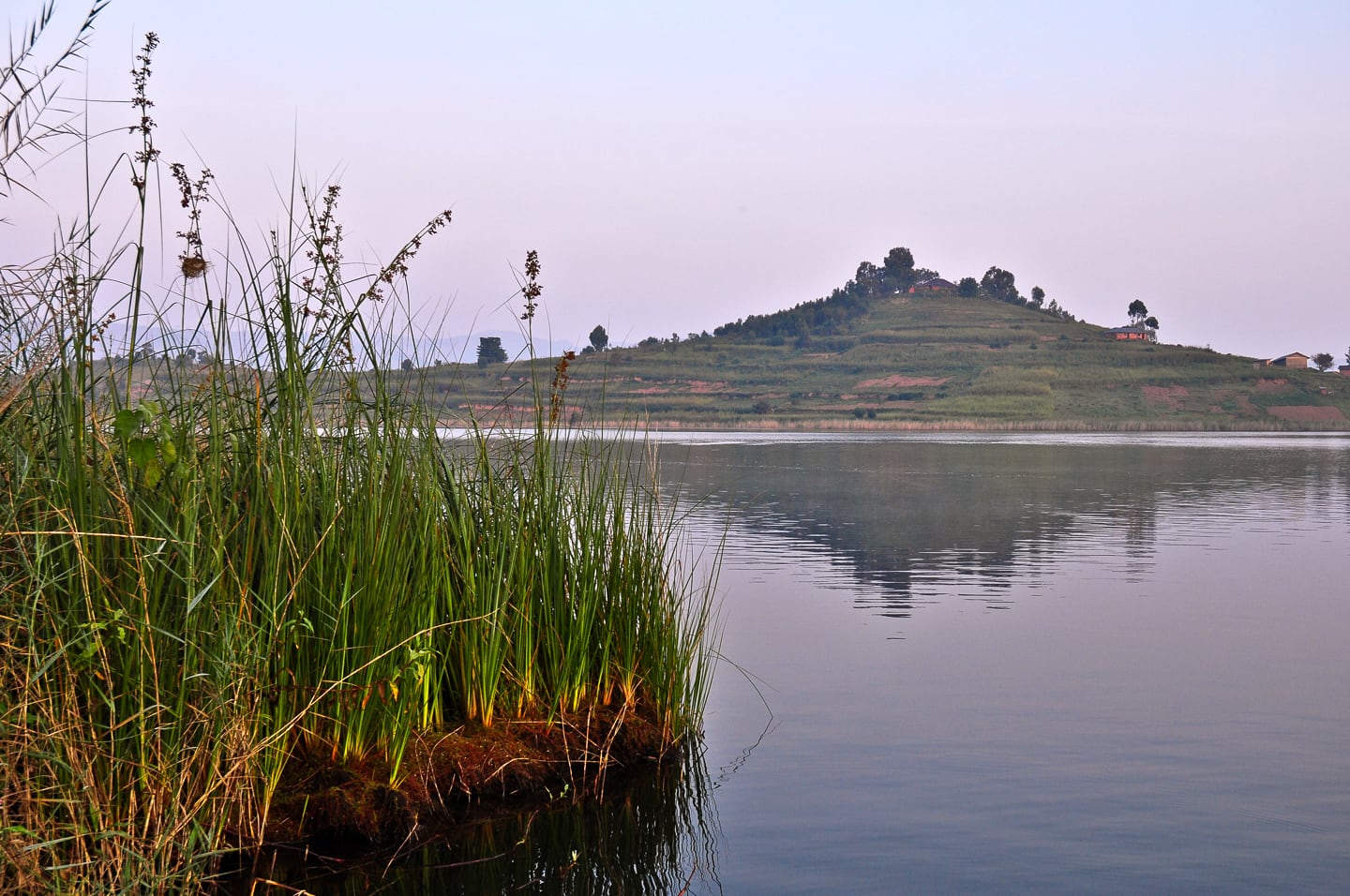 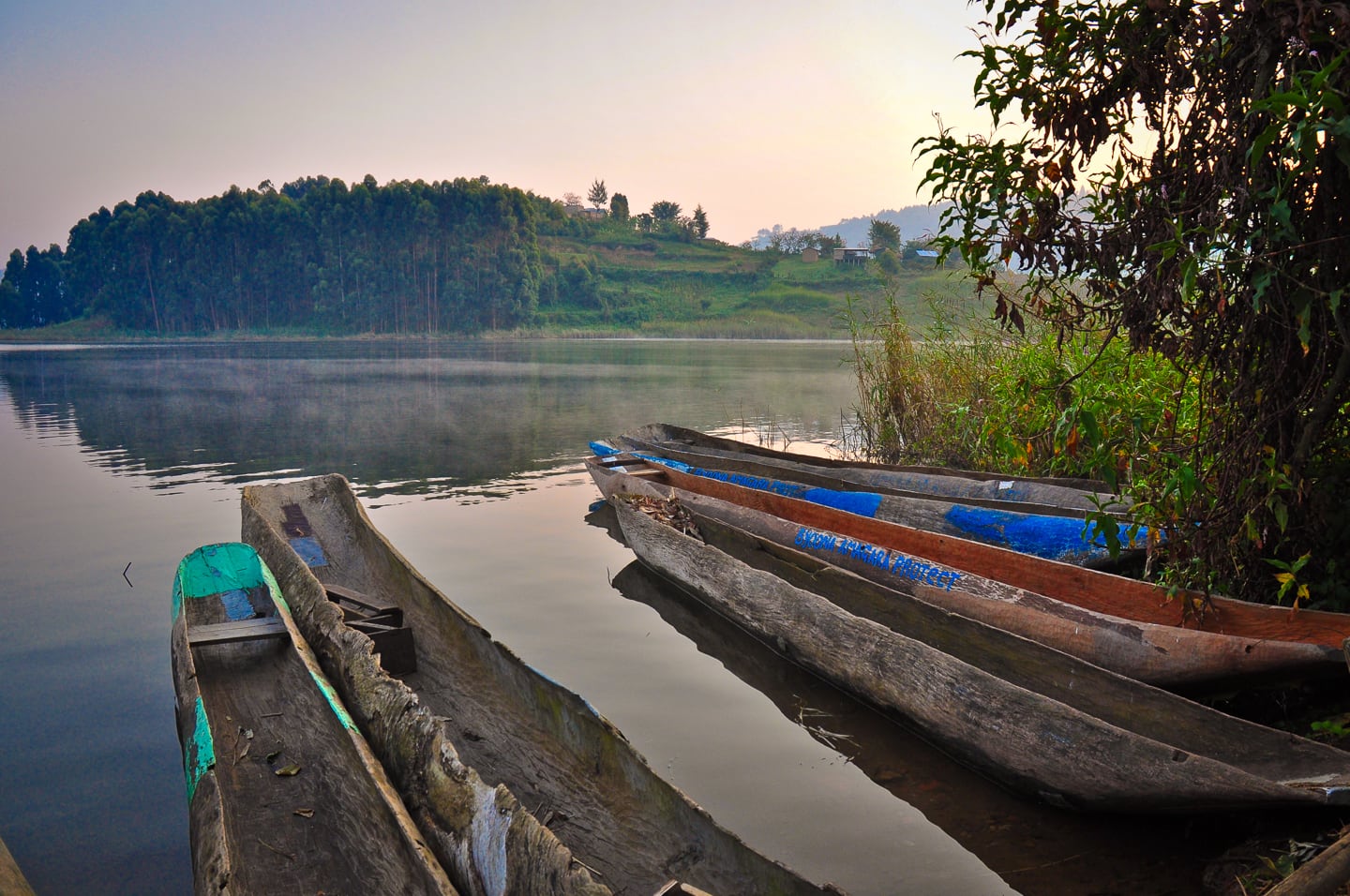 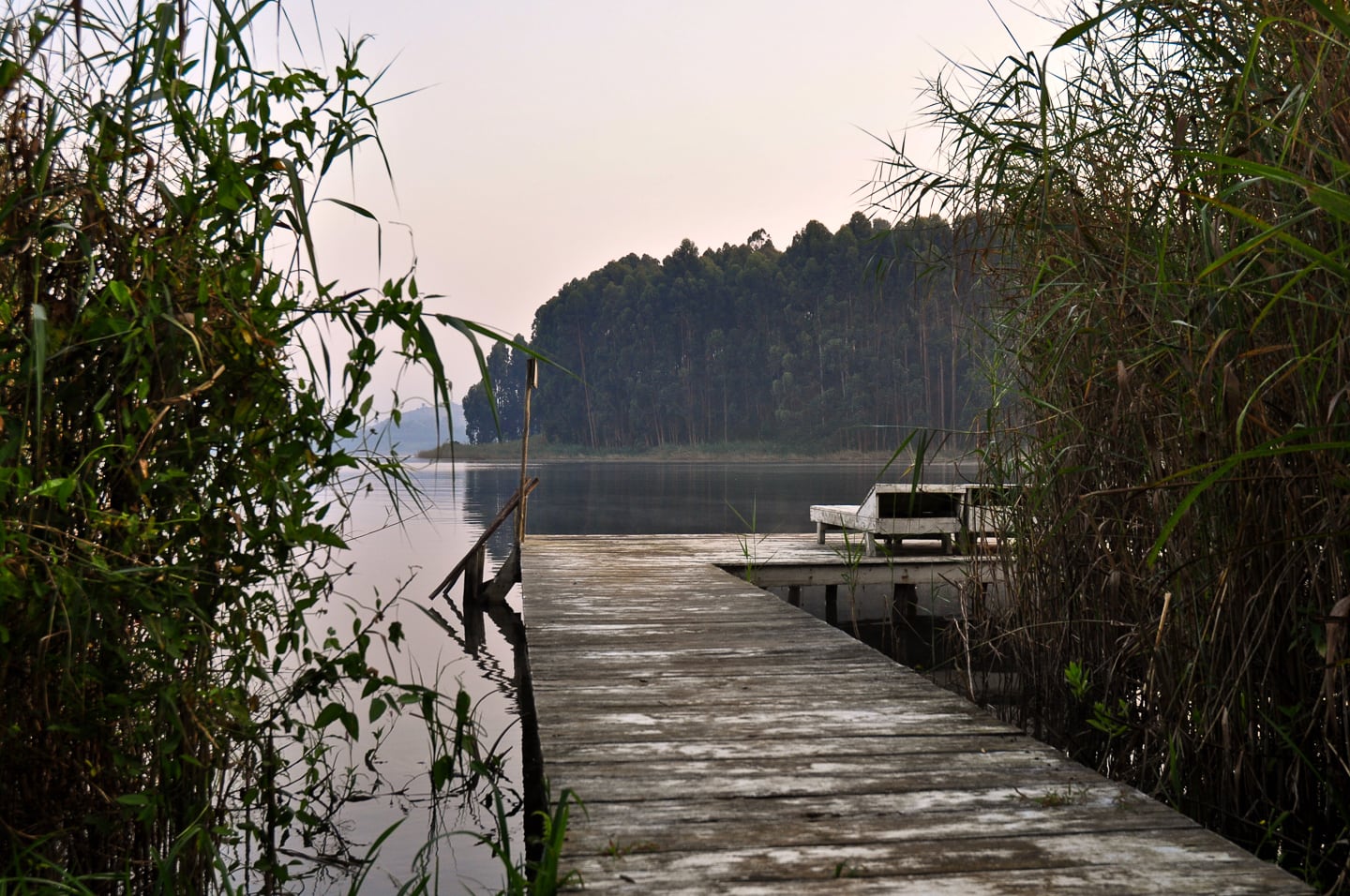 I awoke the first morning we were there for a sunrise swim in the lake. The air was warm but not yet hot, the water was just the right temperature. Not a soul around. Perfection. 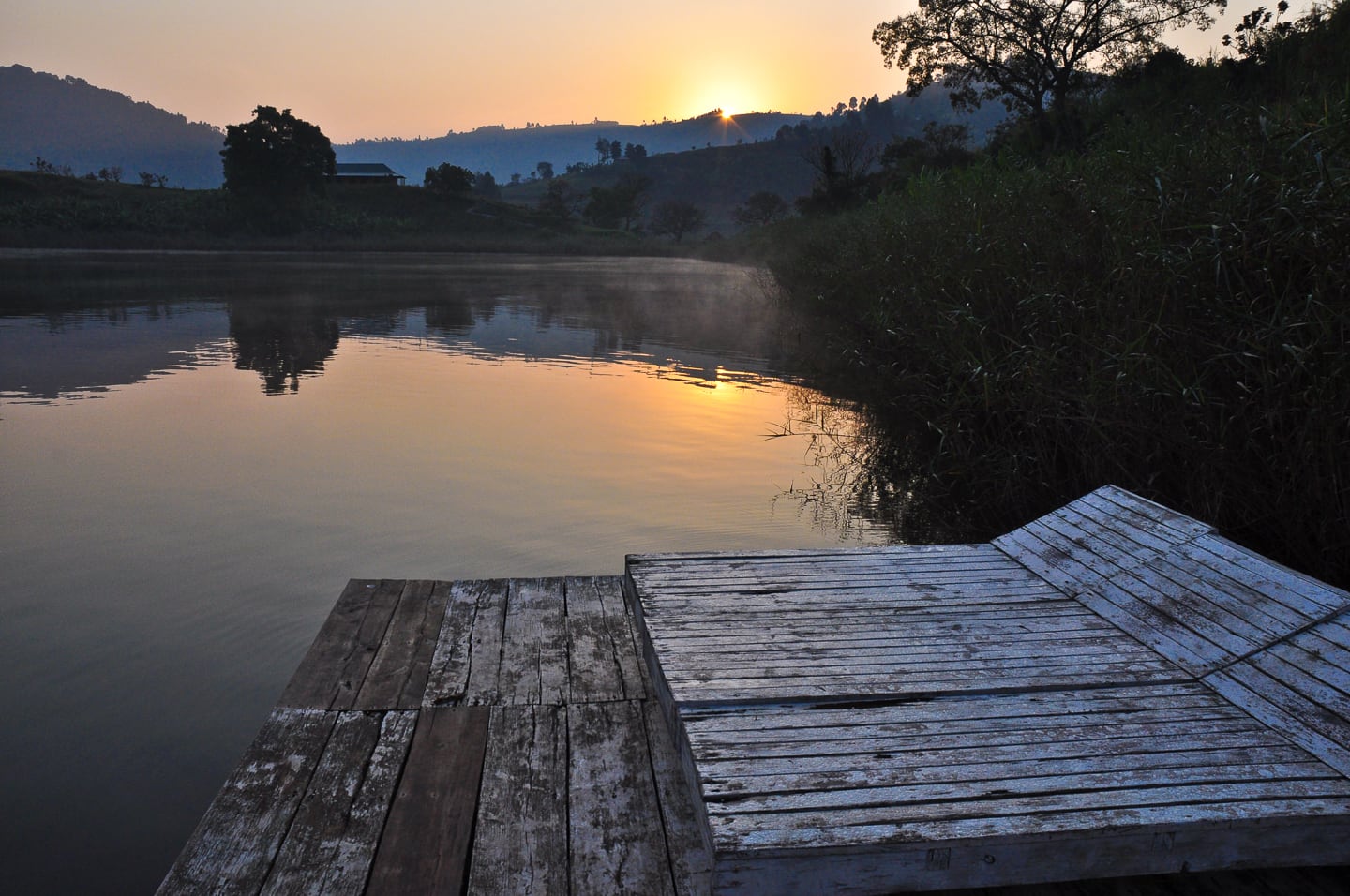 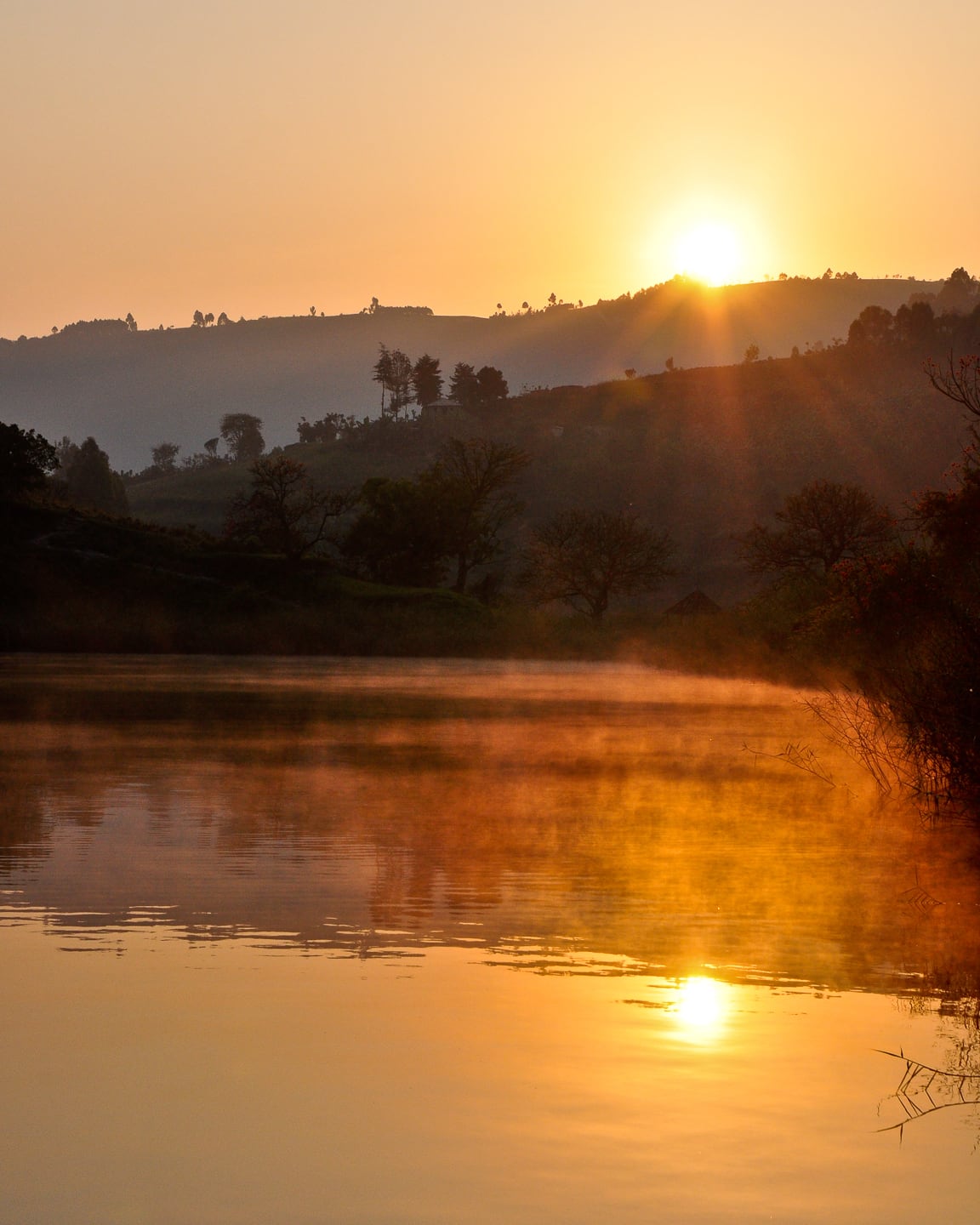 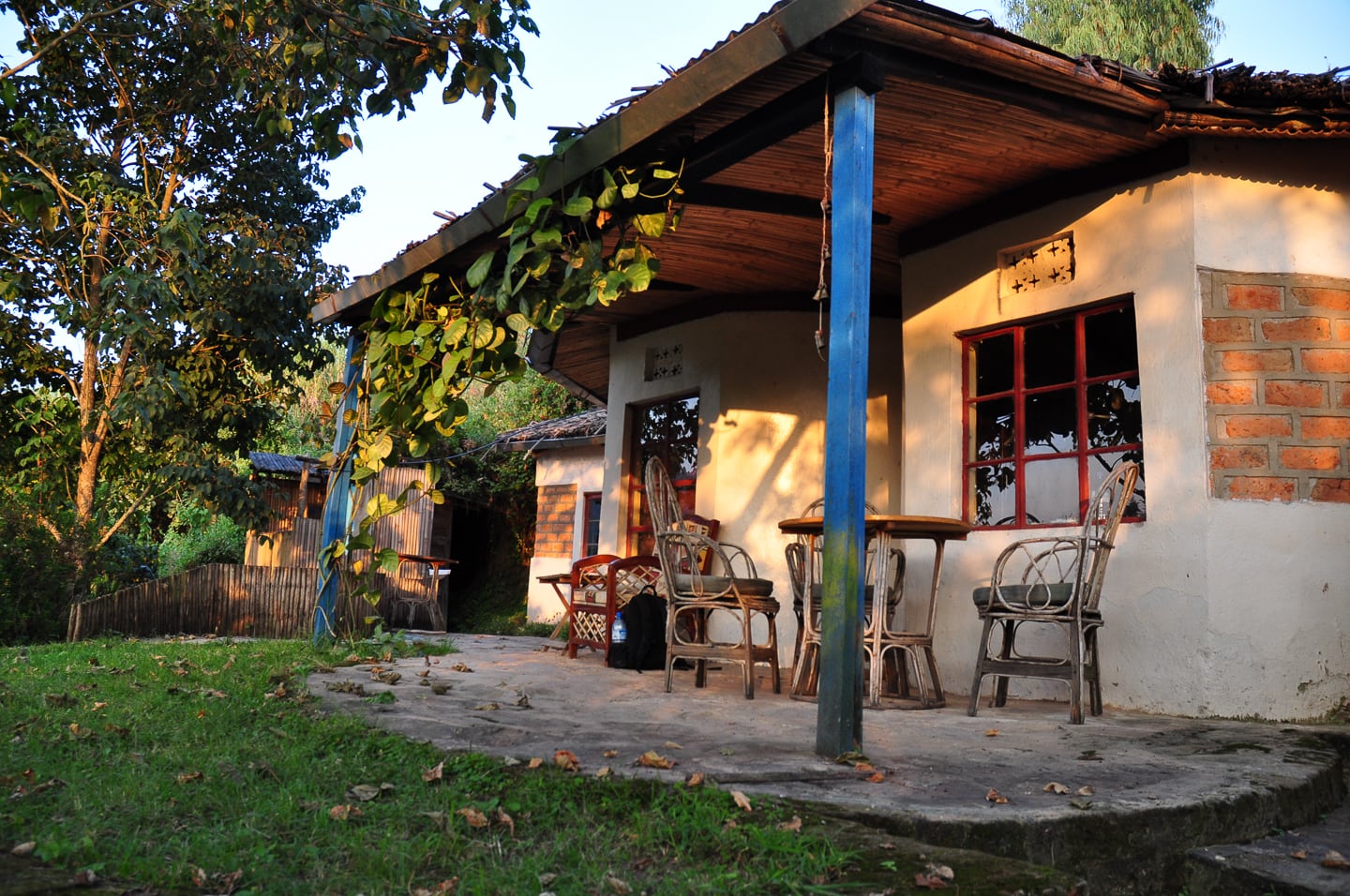 We stayed in the spacious and lovely two-bedroom cottage overlooking the lake. The cottage itself is well-sealed and nicely furnished. Bear in mind, however, we were still on an island in the middle of a lake in the far reaches of Uganda, so we didn’t exactly have reliable 24-hour electricity and in-door plumbing. But the cottage did come with a perfectly adequate outdoor latrine and solar-heated shower, in addition to solar electricity that worked well enough to keep our devices charged for work. 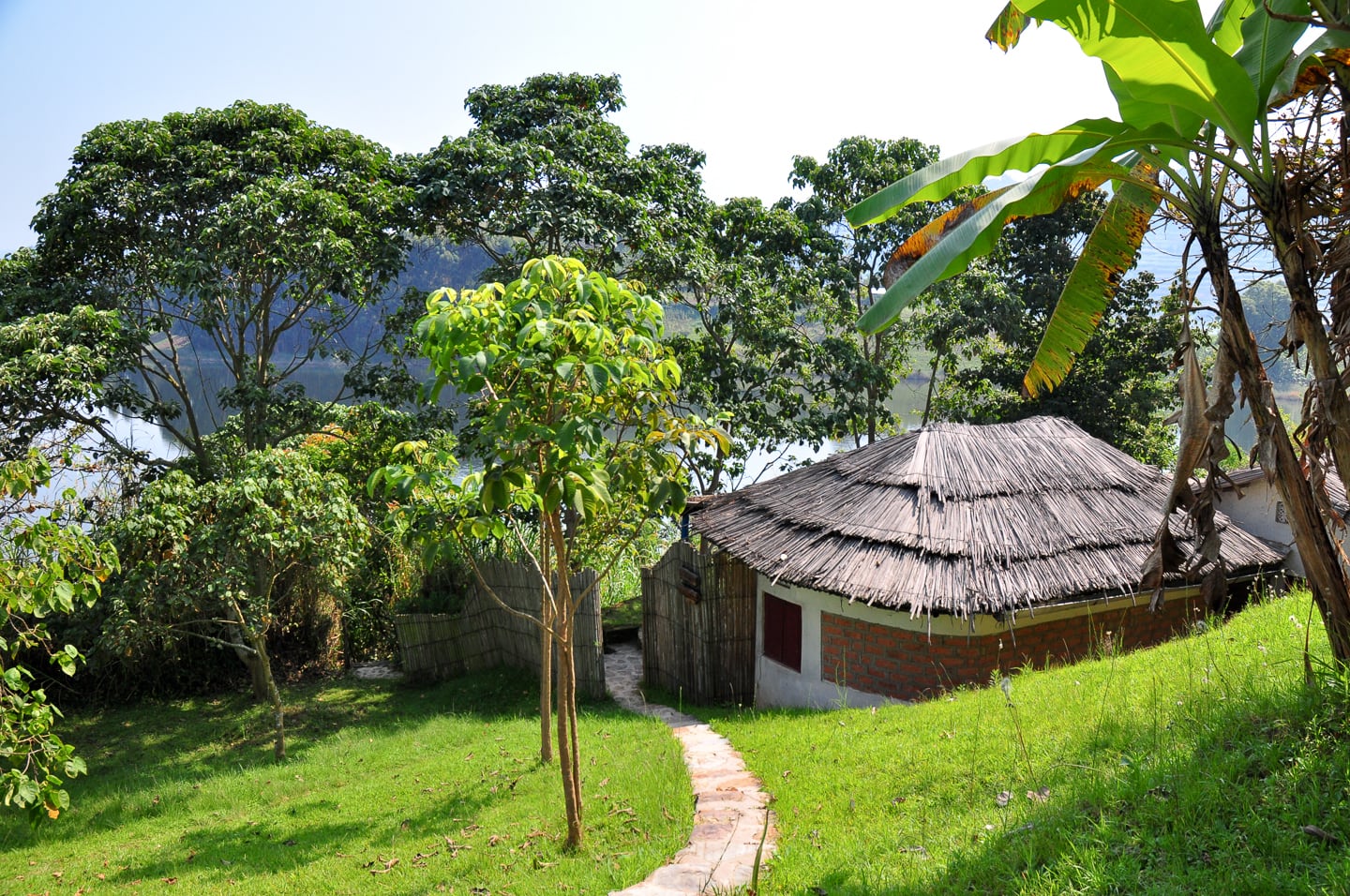 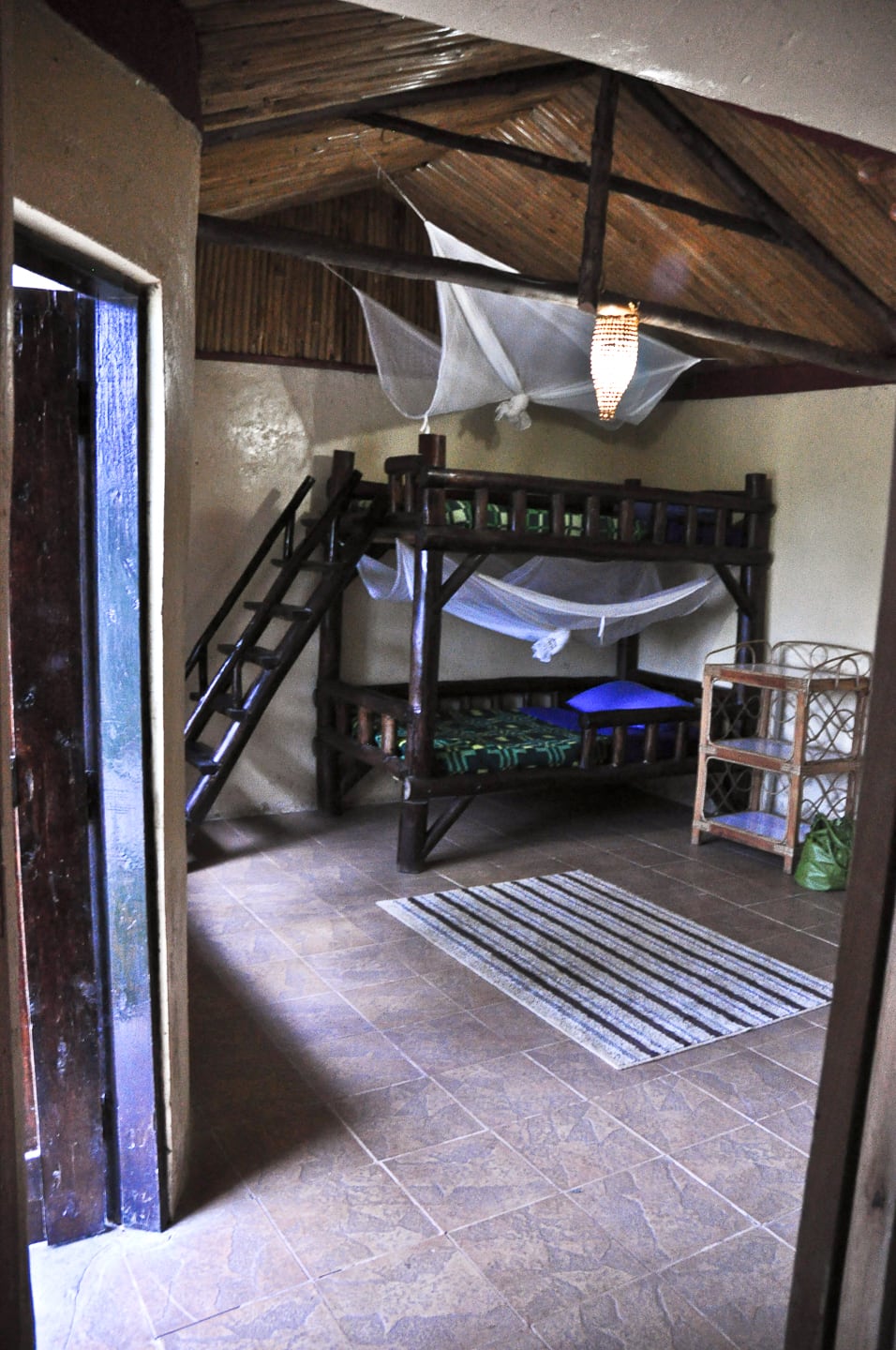 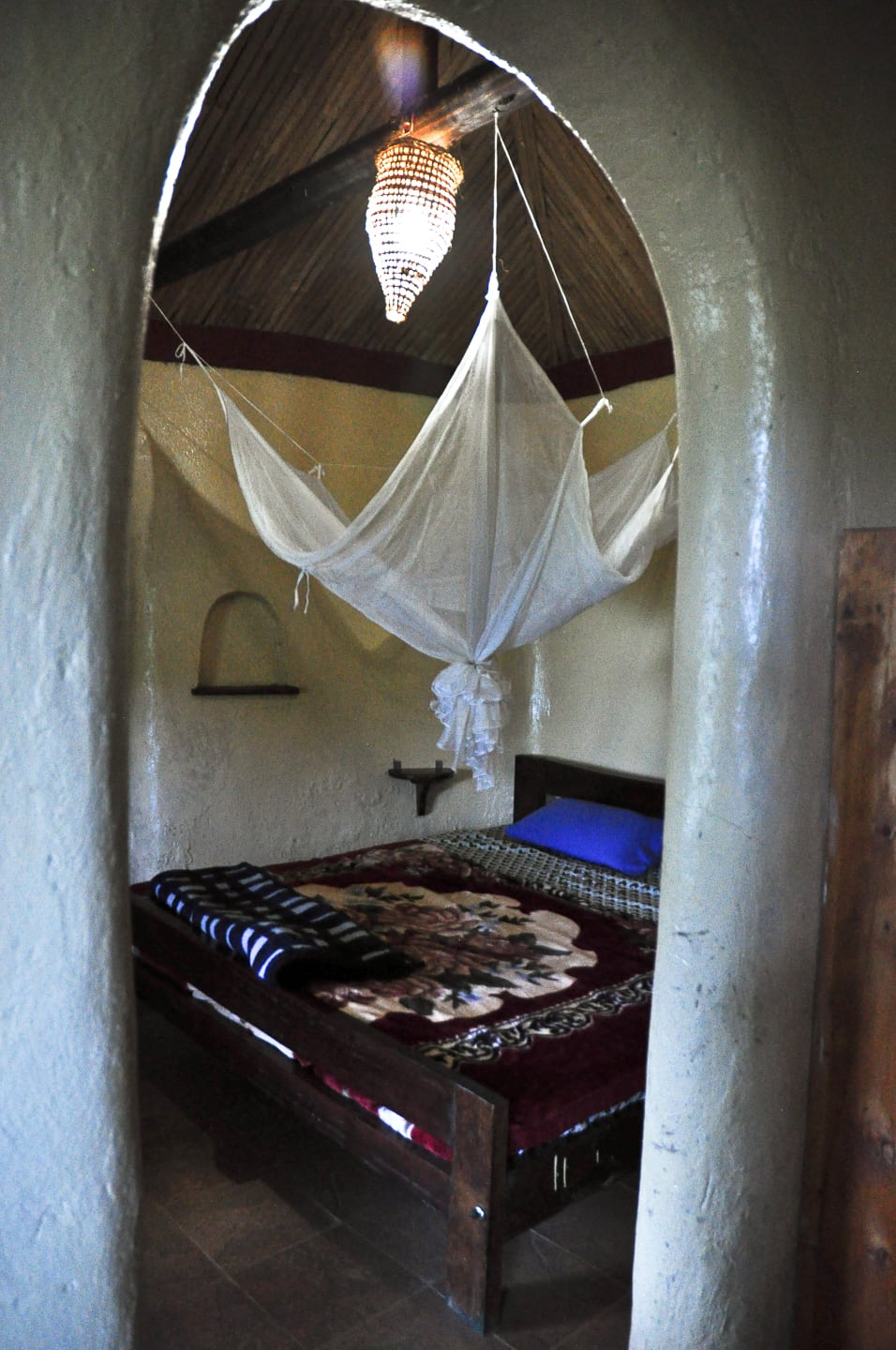 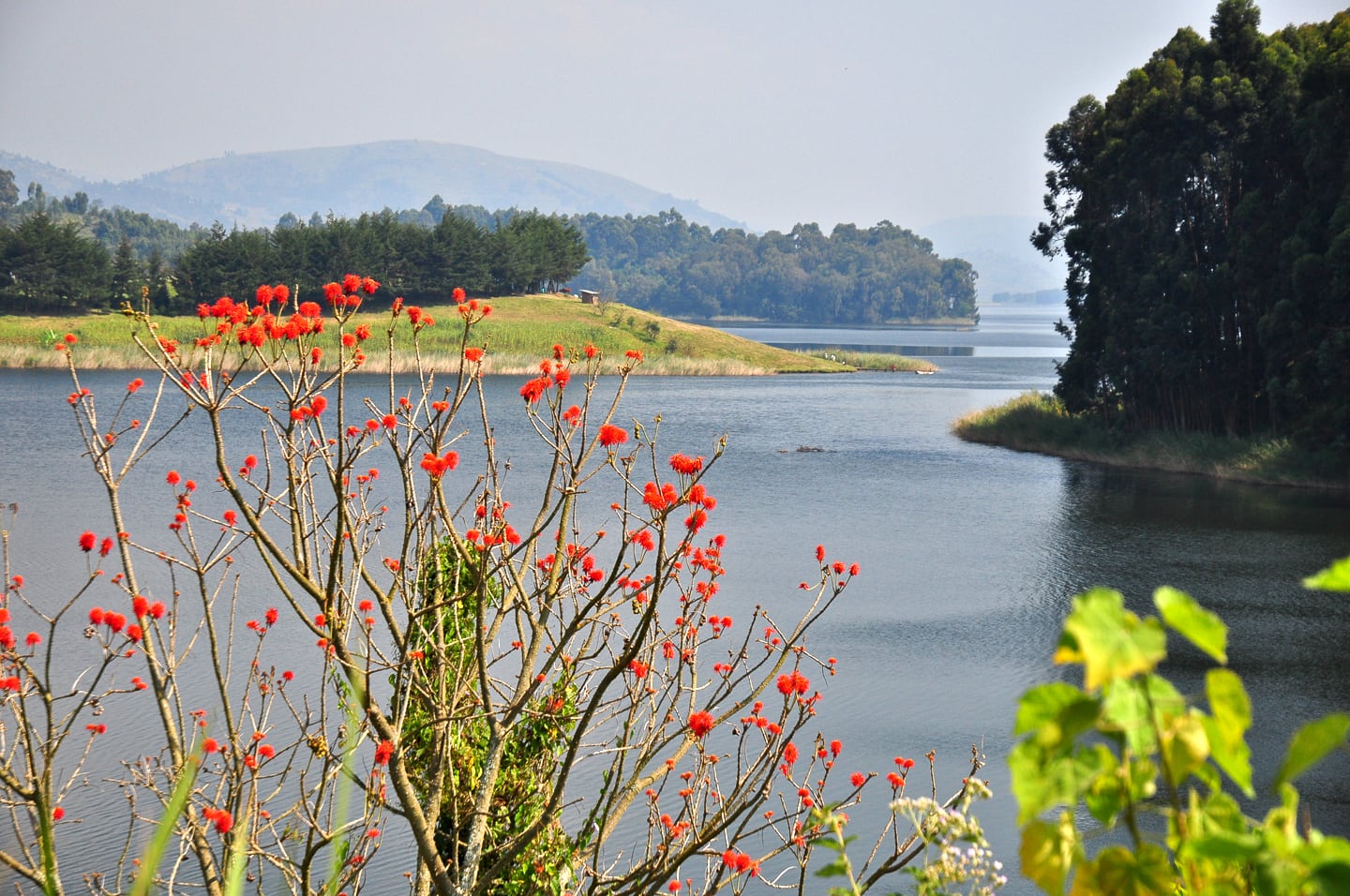 In between long bouts of report-writing, we ventured away from the lodge (which has no physical boundaries) and into other parts of the island. Our biggest challenge was finding some area of the island that didn’t offer stunning views. 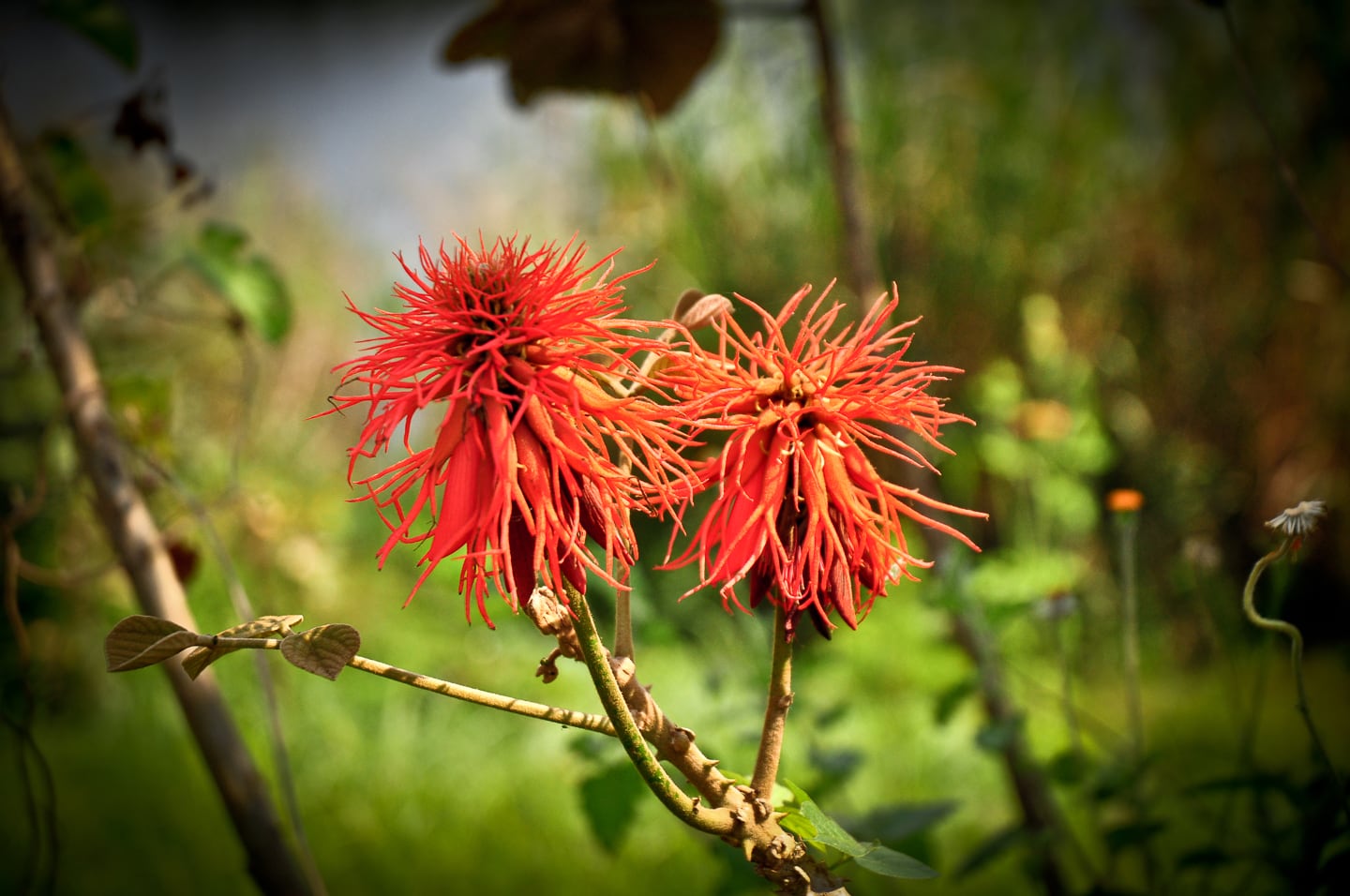 During our meander, we came across a few of the island’s residents, John, a young man who mostly fished and trapped crayfish, and another who does a little bit of everything, it seems.

Large portions of the island were devoted to the production of sorghum. Sorghum is one of Uganda’s most important cash crops used to make flour, porridge, couscous, and even beer! It’s a hearty, fast-growing crop that has seen its value rise considerably in recent use, largely due to increased demand from beer makers such as Nile Breweries (a subsidiary of SABMiller). 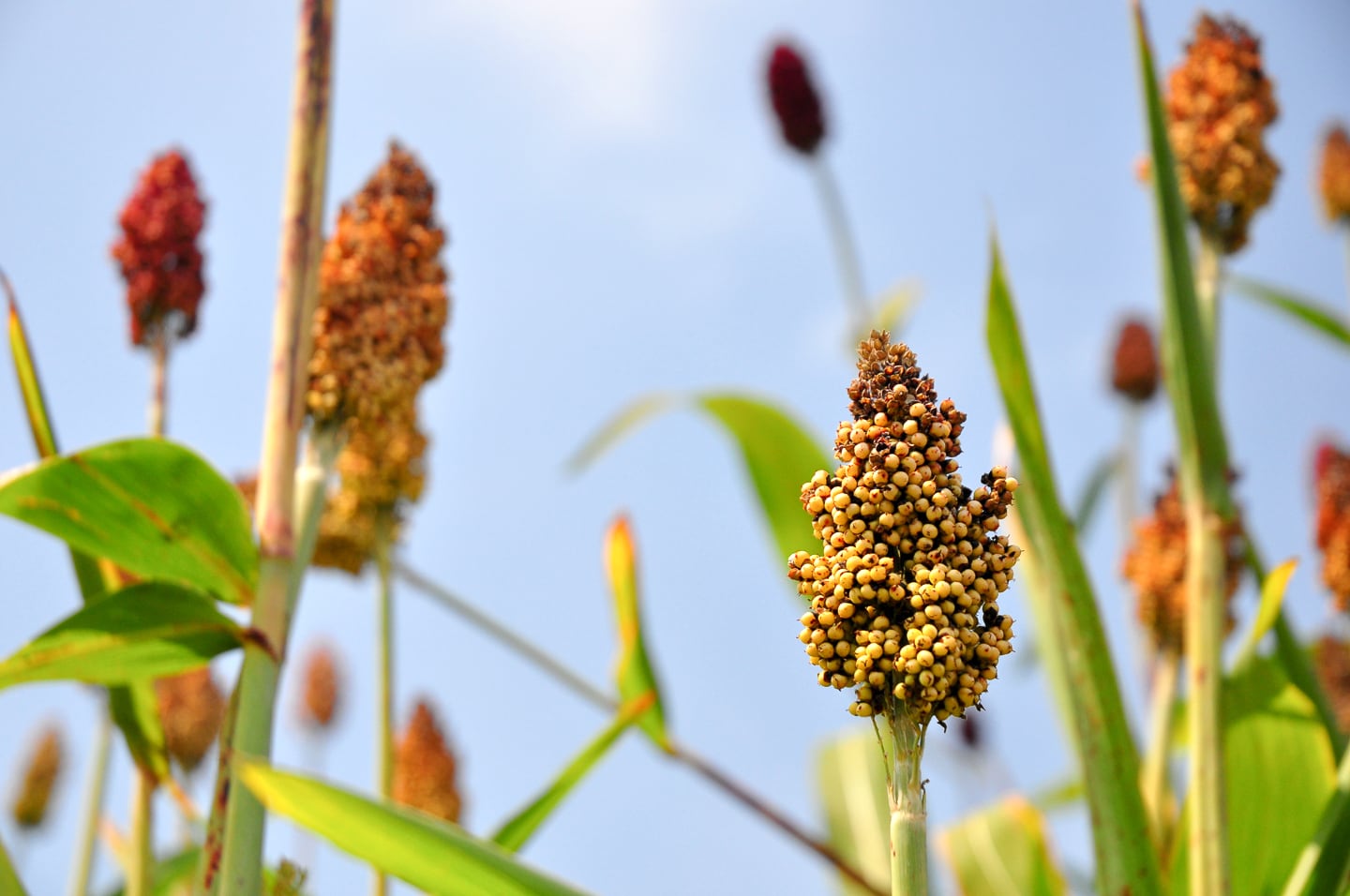 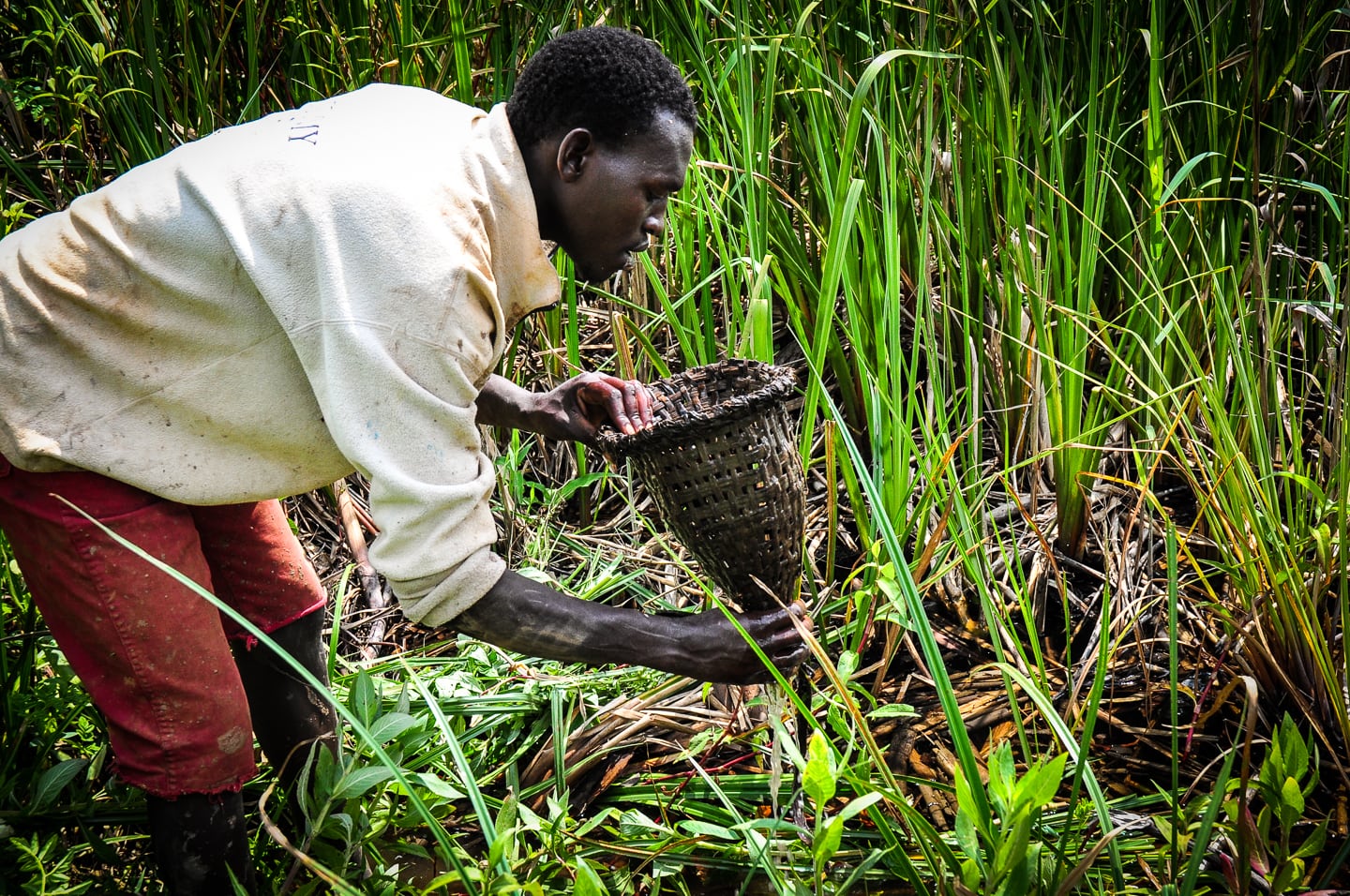 John checking one of his crayfish traps at the water’s edge. 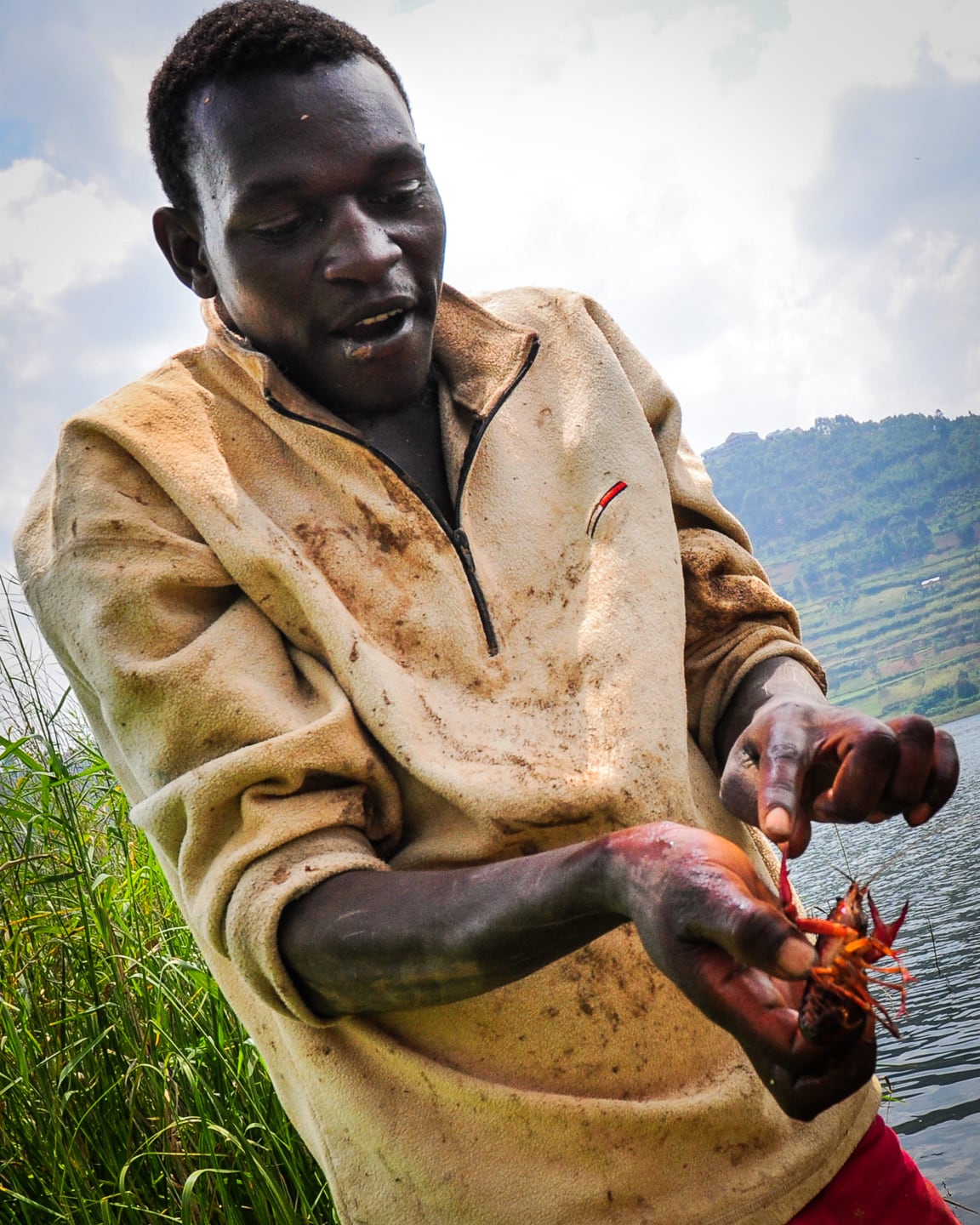 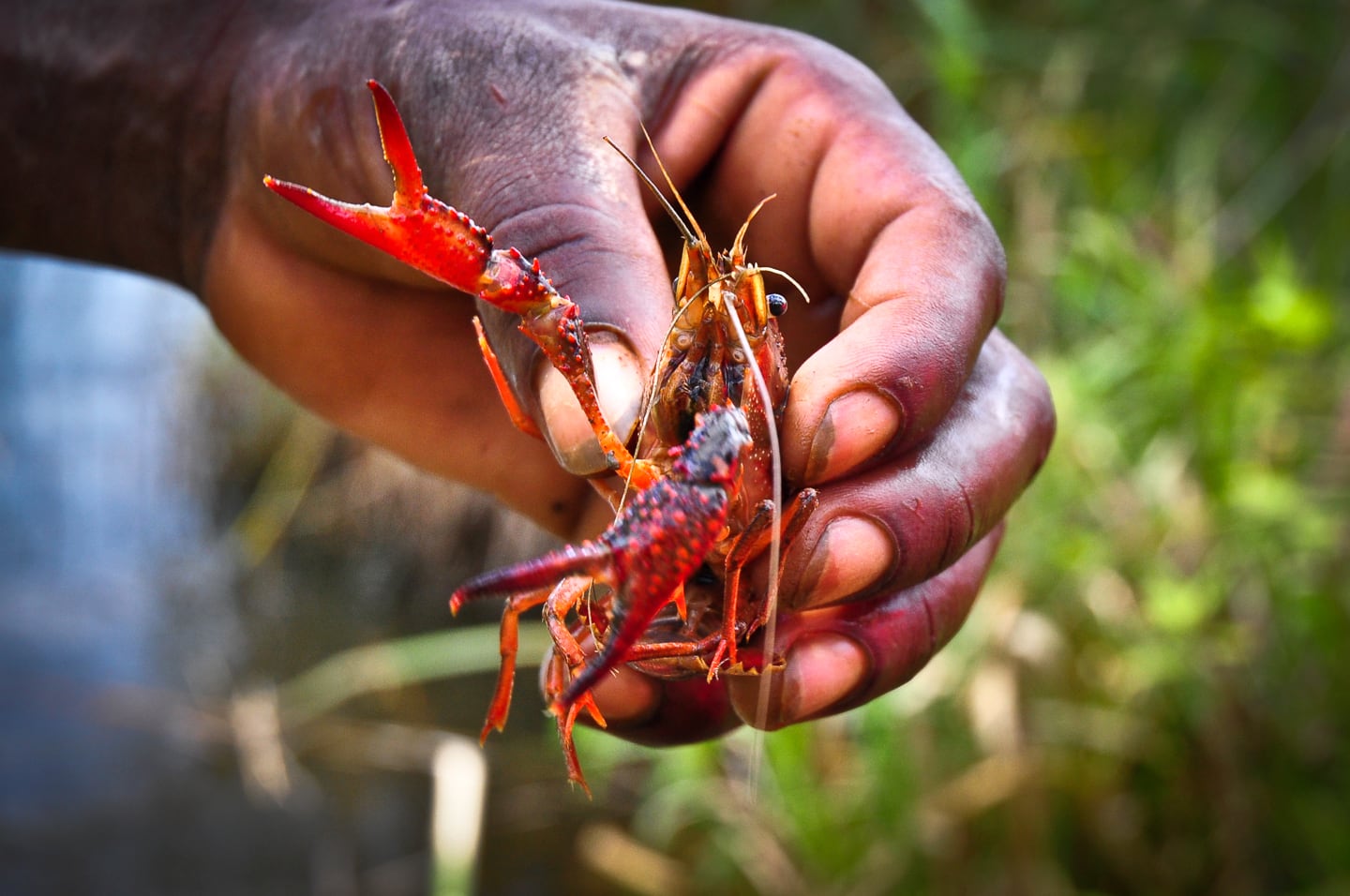 One more for the bucket! Crayfish are one of Byoona Amagara’s specialties. They’ll basically throw it in anything, including pizza! 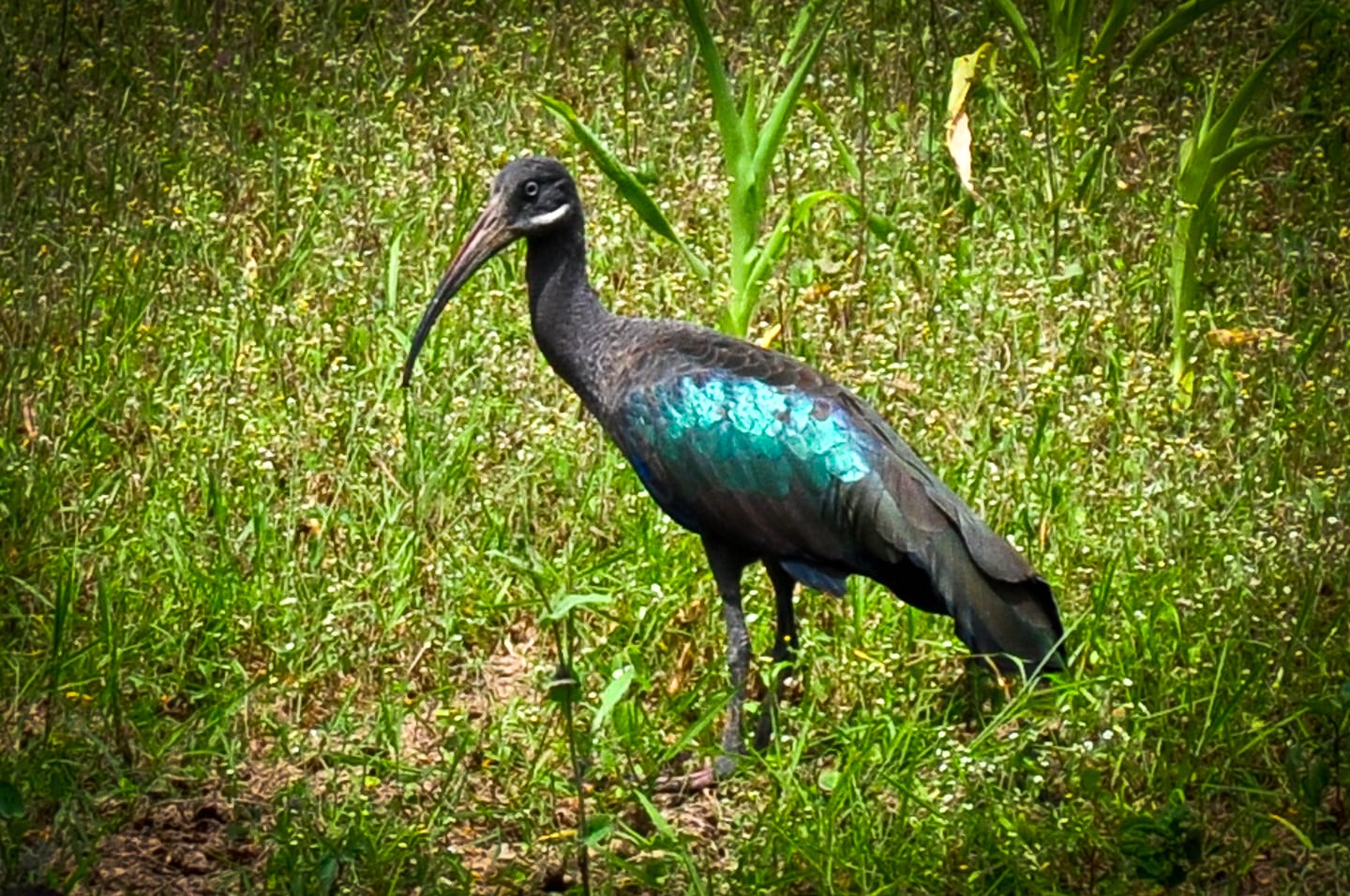 A large Hadada Ibis with its striking iridescent sheen. The Hadada is named for its loud and distinctive haa-haa-haa-de-dah call.

For whatever reason, I was really enamored by this lovely and stupid-looking bird (if you’ve seen them, they look like the epitome of a dumb cartoon bird character). S/he was a bit of a mystery, appearing at odd times in random parts of the island (I’m convinced it was the same Ibis). It’s hard to tell from the photo above, but the bird is fairly large, comparably to a turkey or peacock. I’d be walking along and then not twenty feet away this guy would squak and stare me down, sort of like the naked indian in the Doors movie. I’m not sure how many times this scene was repeated until I finally got a clear shot of the bird. After that, I never saw this particular Hadada again. 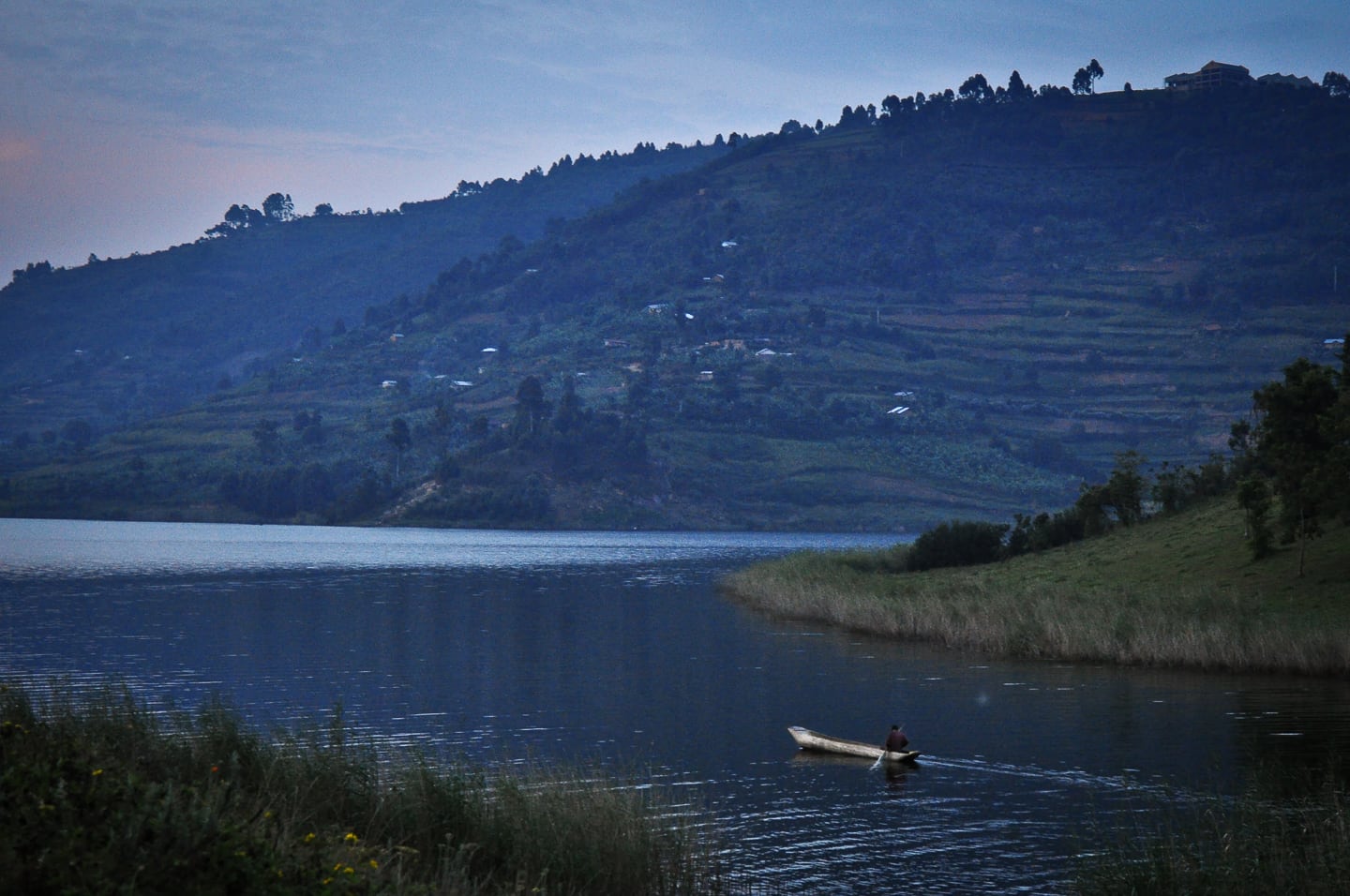 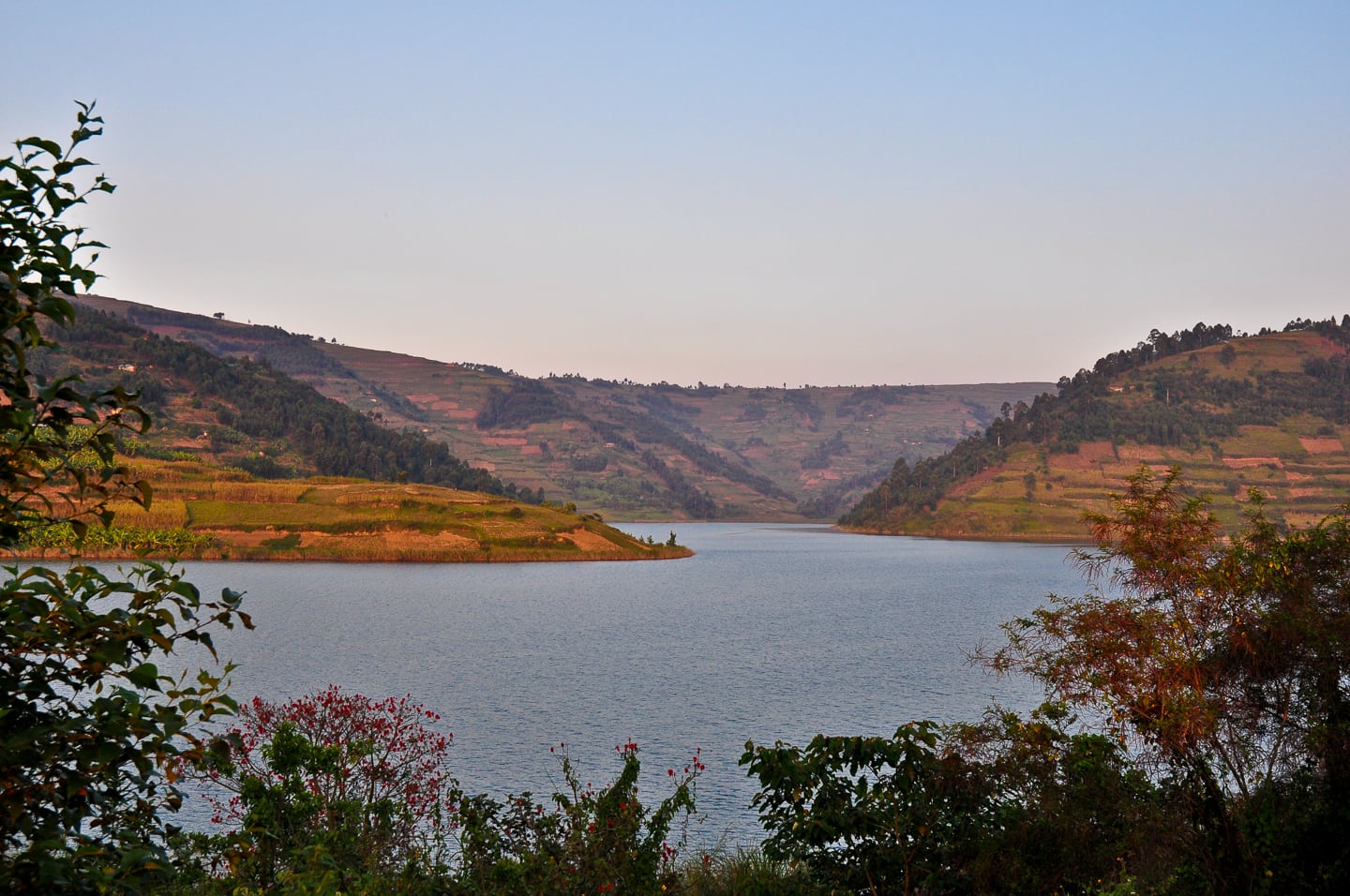 Another great thing about Byoona Amagara is the work they do in the local community, funding and implementing various grassroots-level projects that support rural education, healthcare, micro-finance and organic agriculture training for local residents. The lodge in fact is a not-for-profit organization and 100% of proceeds from the lodge go to support sustainable community projects. In a perfect world, all tourism would directly benefit and positively impact local residents. Unfortunately, this is not the case in most tourism destinations across the globe, but things are changing. Byoona Amagara stands as a model for how less can be more and how a tourist destination can benefit in a positive way from outside investors setting up shop in a remote part of the world. 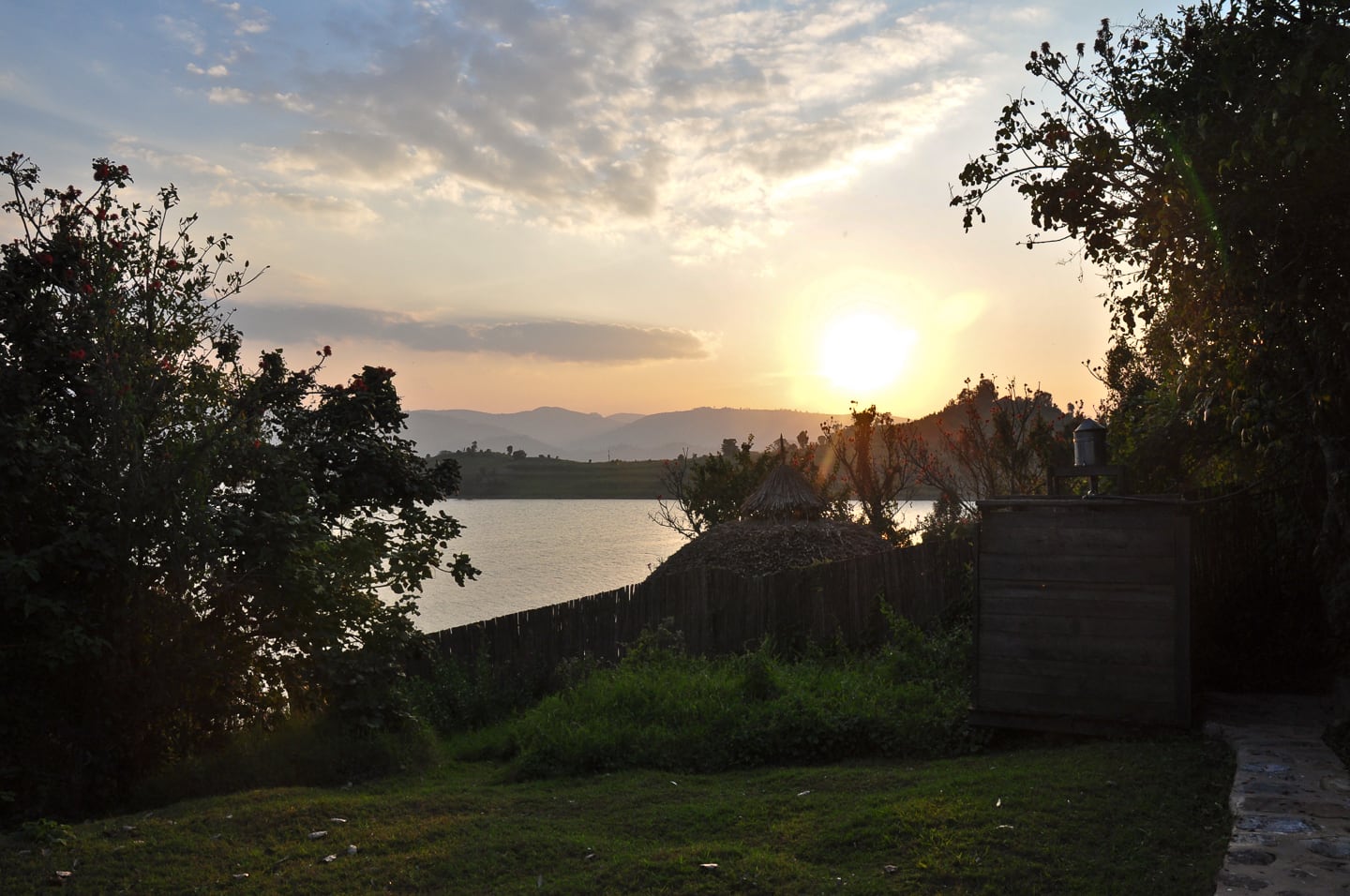 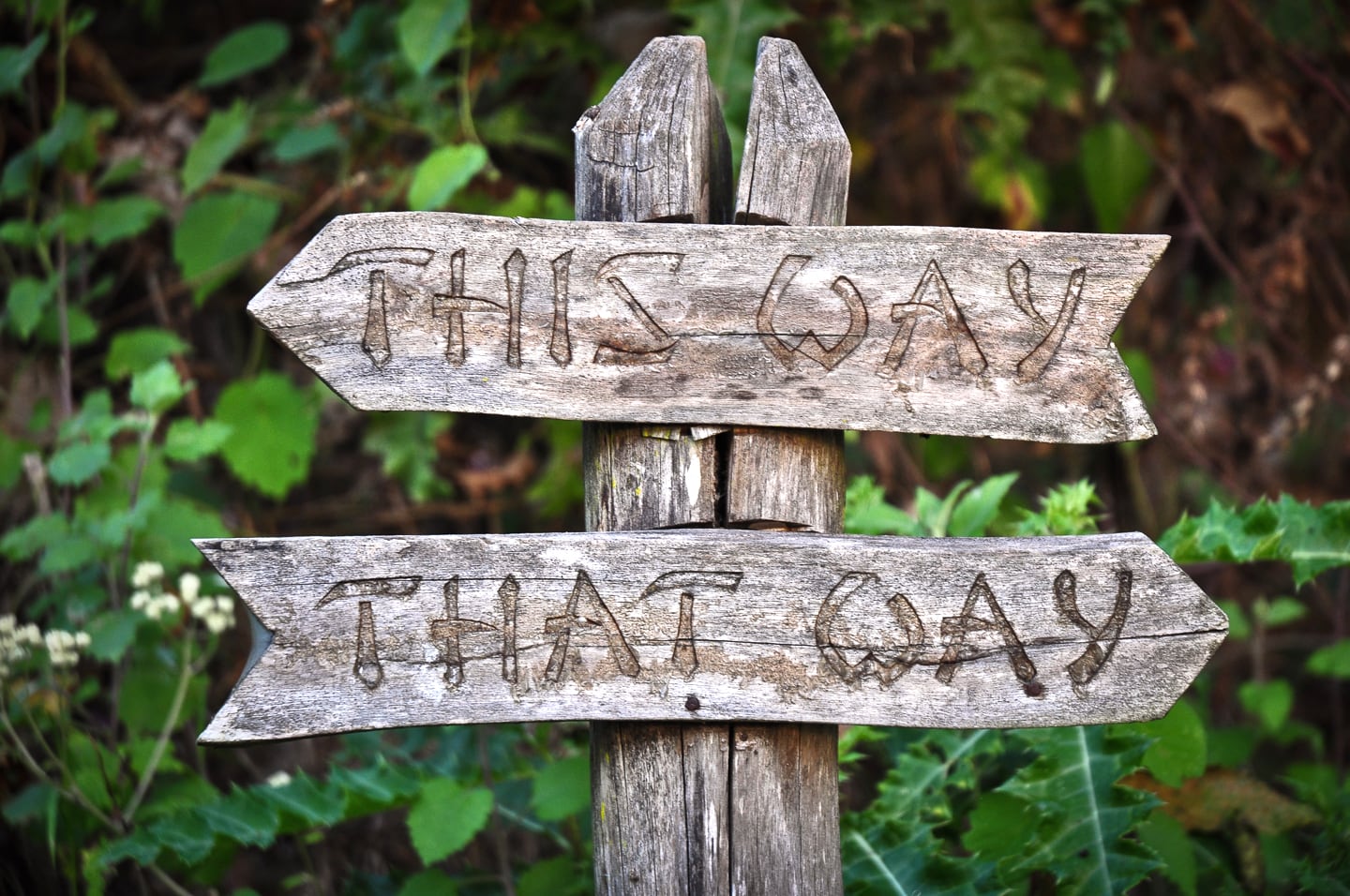 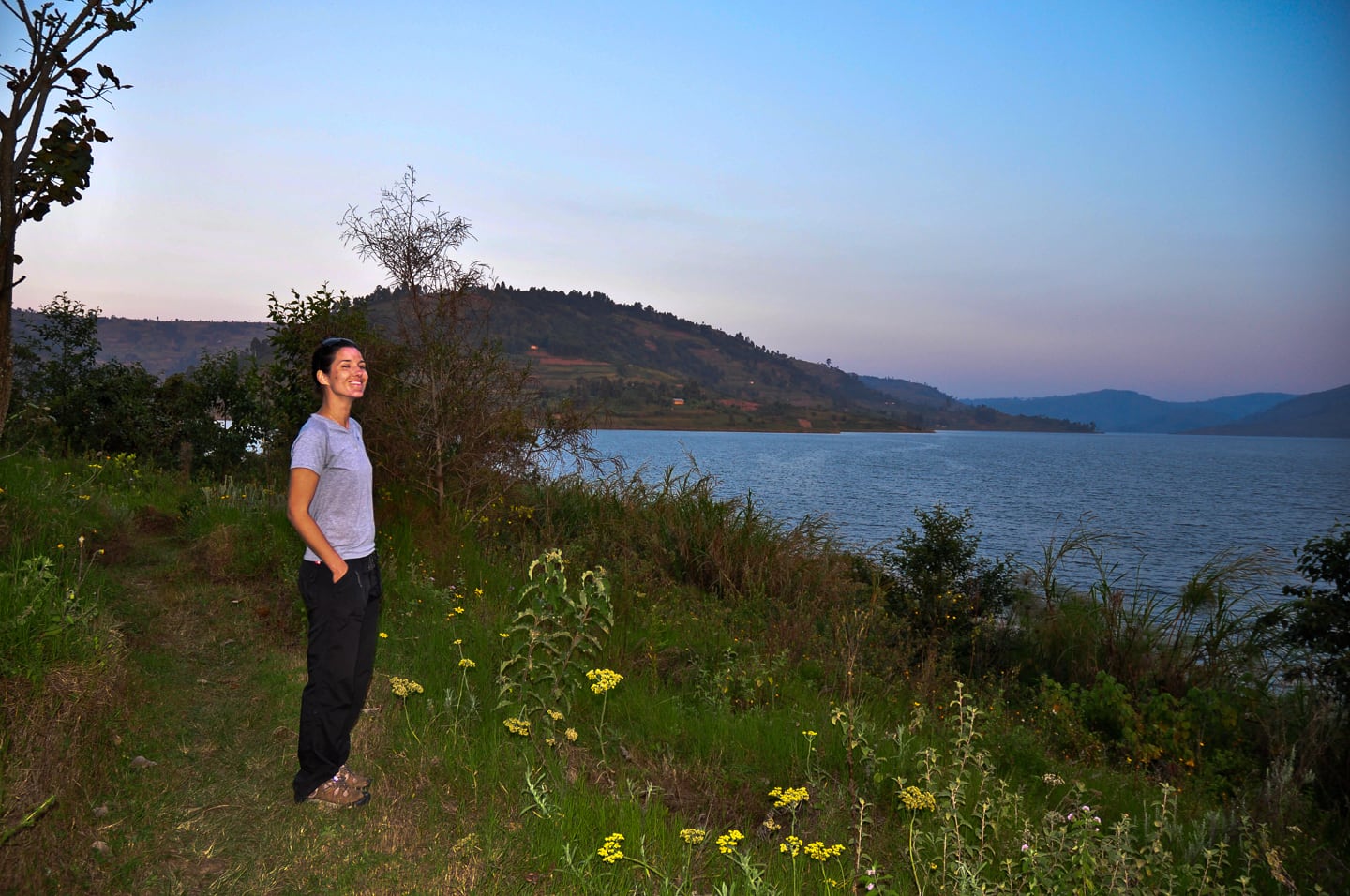 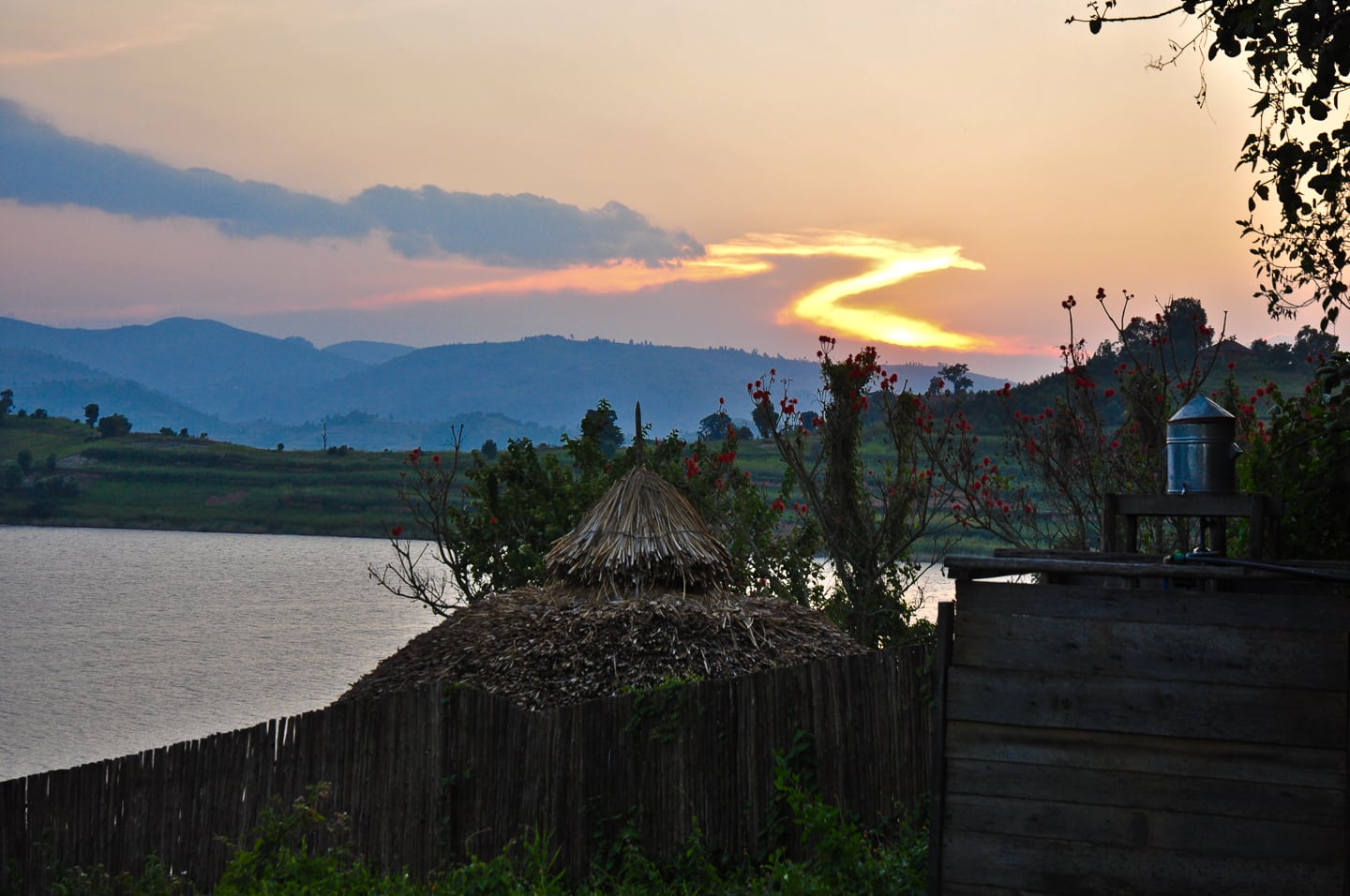 Are you planning to return to the island in the future?