We set out from Stellenbosch on a gorgeous midweek morning with two simple objectives for the day: to cover the 20 miles to Franschoek and to hit a few wineries along the way. Done and done.

Browse the interactive map above to learn more about our route. 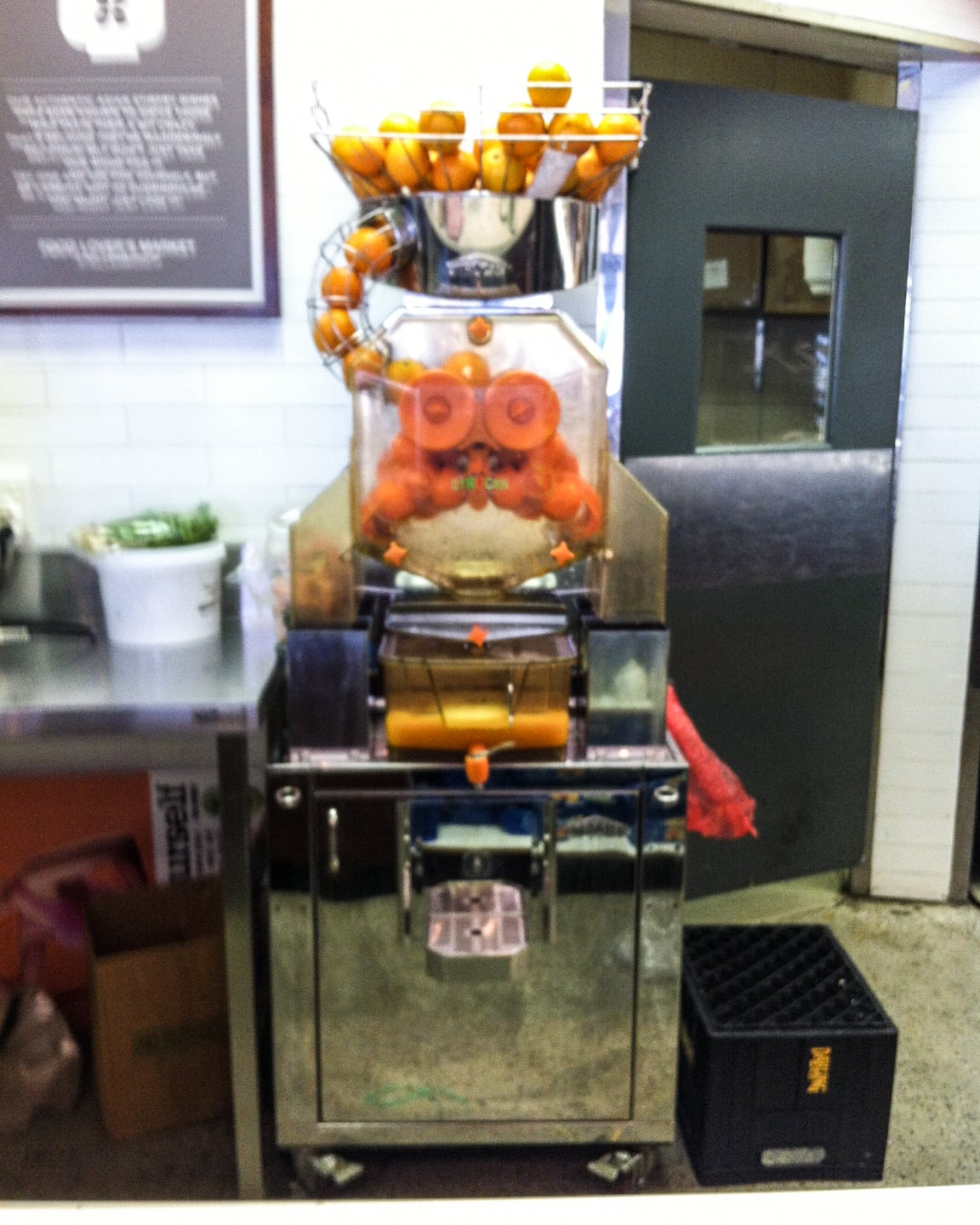 We found this crazy orange juice-making contraption at our breakfast place in Stellenbosch.

Stellenbosch was much larger and more urban than we thought it would be. Franschoek, where we stayed the next night was smaller and more quaint, more along the lines of what we had originally envisioned for Stellenbosch. If that sort of thing matters to you when touring the Cape Winelands, I think I would recommend staying in Franschoek rather than bothering with Stellenbosch, which has very little to distinguish it from any other medium-sized city.

A quick note about South Africa’s wine industry before we begin. The Cape Winelands, situated just 30 minutes outside of Cape Town, boasts some of the world’s best wineries all in a very compact area, and some dating back to the 17th century. The wine industry owes its existence to the establishment of Cape Town as a refreshment station for ships traveling between Asia and Europe beginning in 1652, as well as its ideal wine grape growing climate. There are dozens of excellent wines in very close proximity to each other, but we (rather, Lori) chose three to focus our attention on for the day. We found that three was just about right for us. 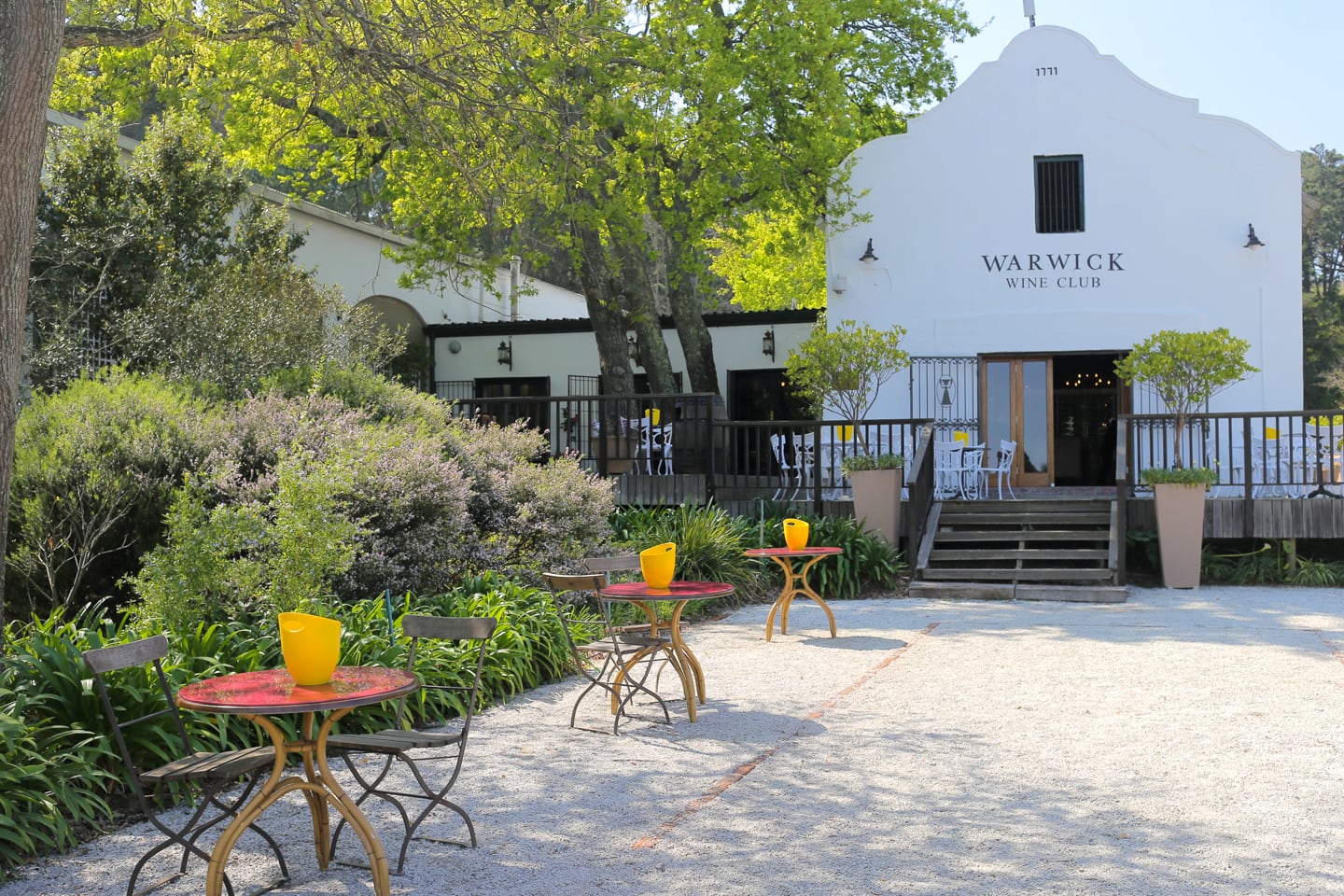 Our first stop on our mini wine tour of the region was Warwick Estate in Stellenbosch, known for its legendary red Bordeaux-like blends and their manicured grounds. 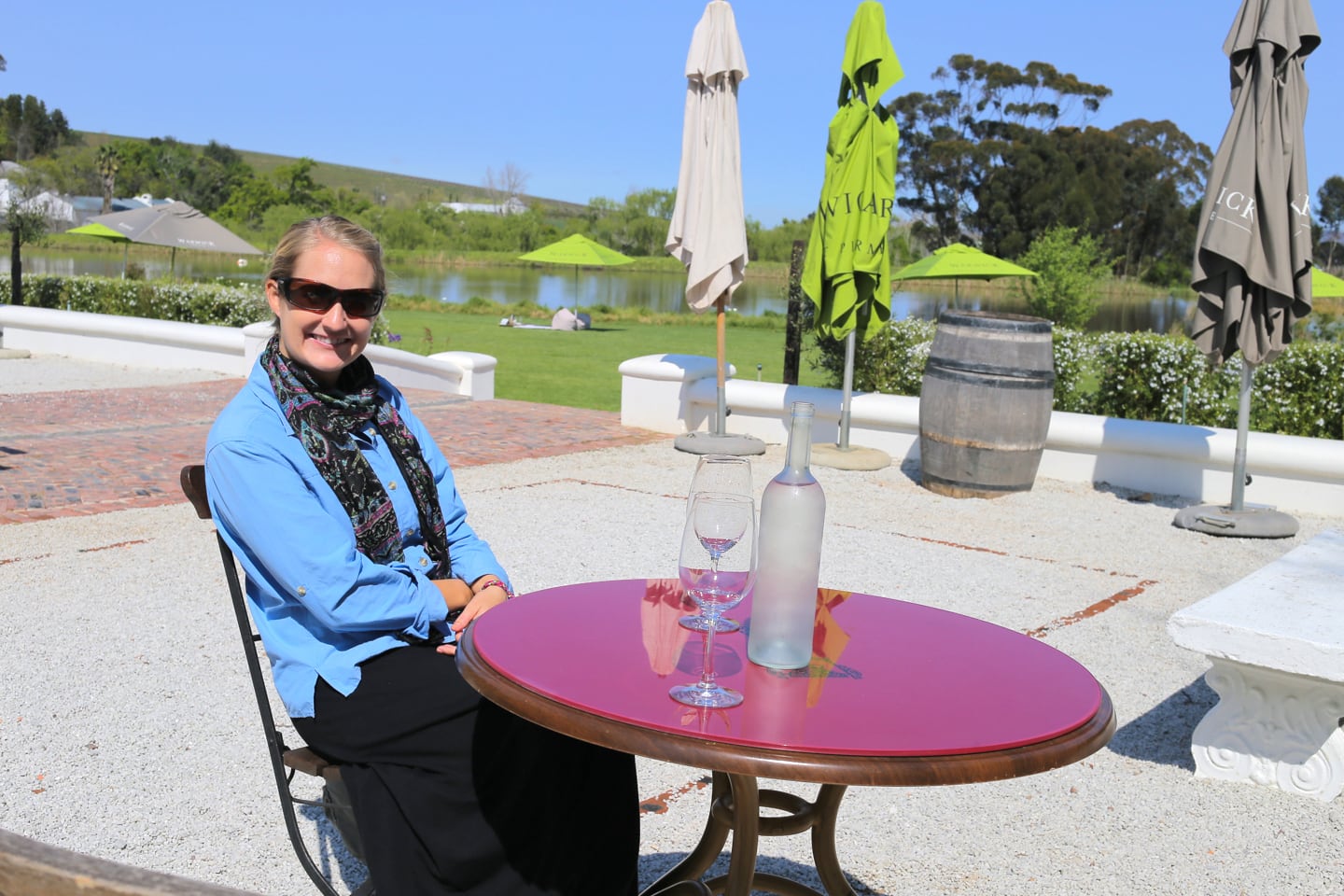 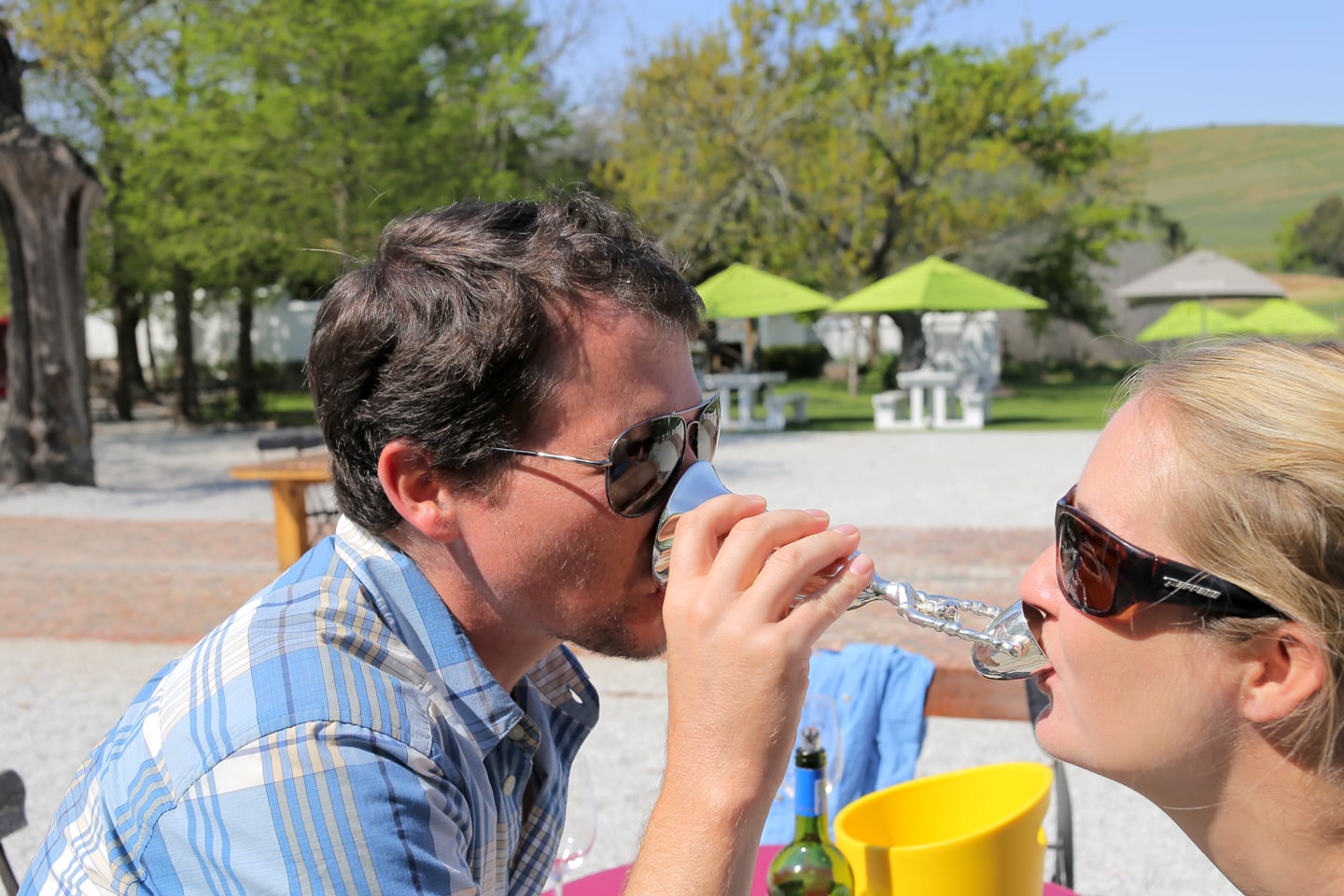 One of the things that the servers have you do at Warwick (presumably couples) is try and drink out of their “Wedding Cup,” which was made to allow two people at once to drink out of the same cup without spilling a drop. There’s a whole backstory that goes along with the cup that I’m not going to get into here, but if you’re interested, check out their website, or better yet, hop a plane and visit Warwick yourself. 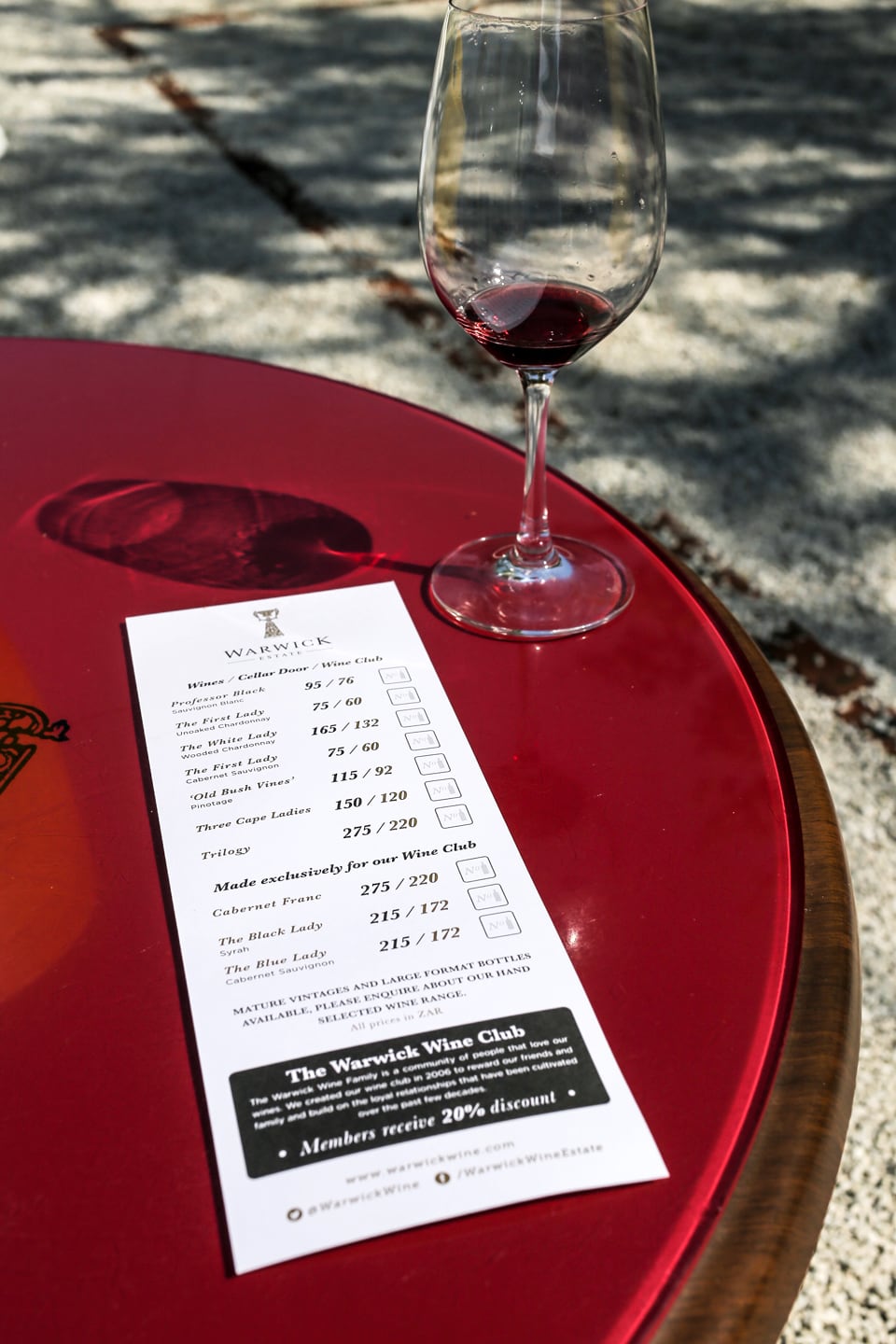 Seven wine tastings (3 whites, 4 reds) for about US $2.27 (R25) per person — generous pours and excellent wine at that! Their Bordeaux blend did not disappoint! 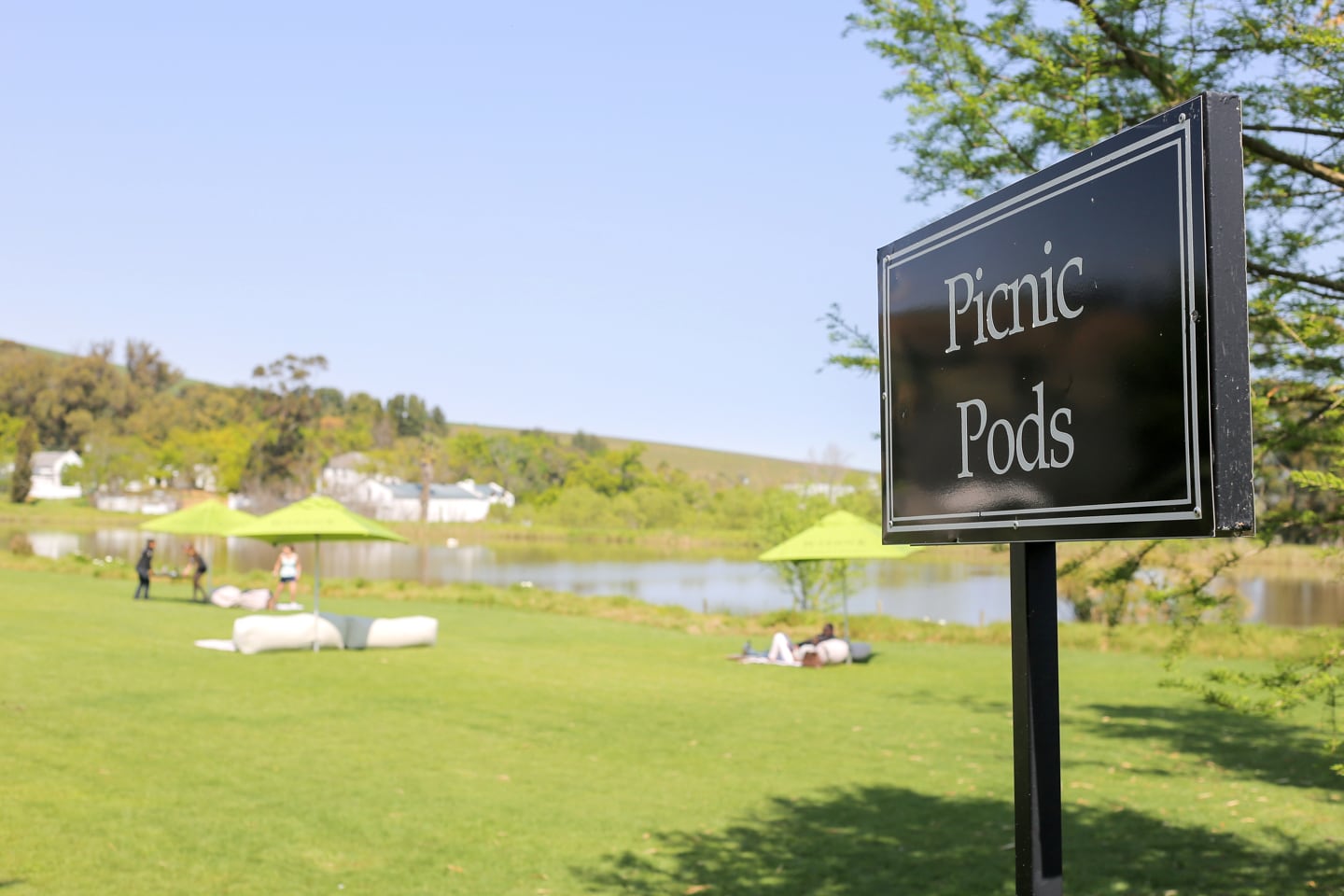 Afterwards, we strolled around the grounds, checking out their unique “Picnic Pods” and areas, all against a breathtaking alpine backdrop. 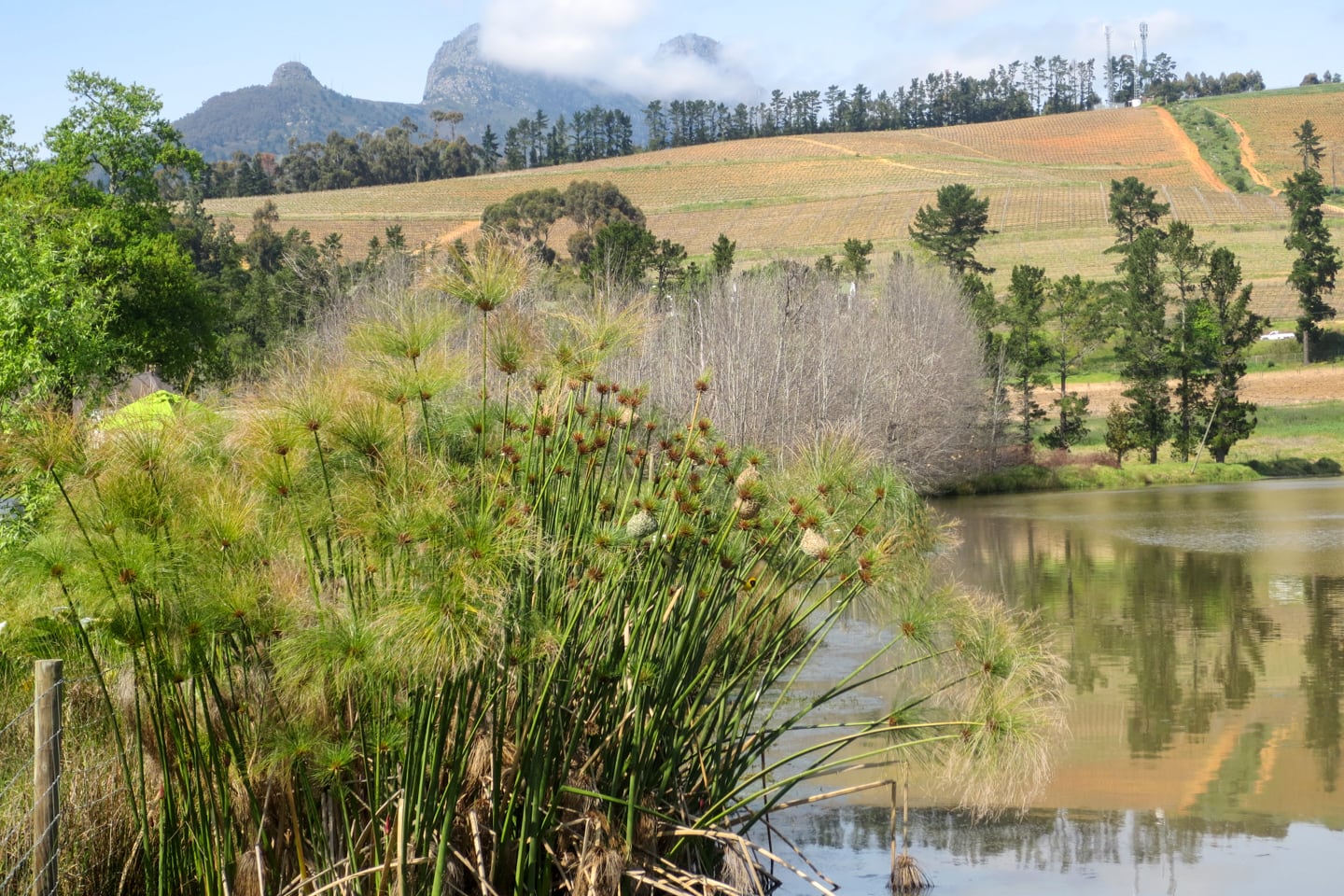 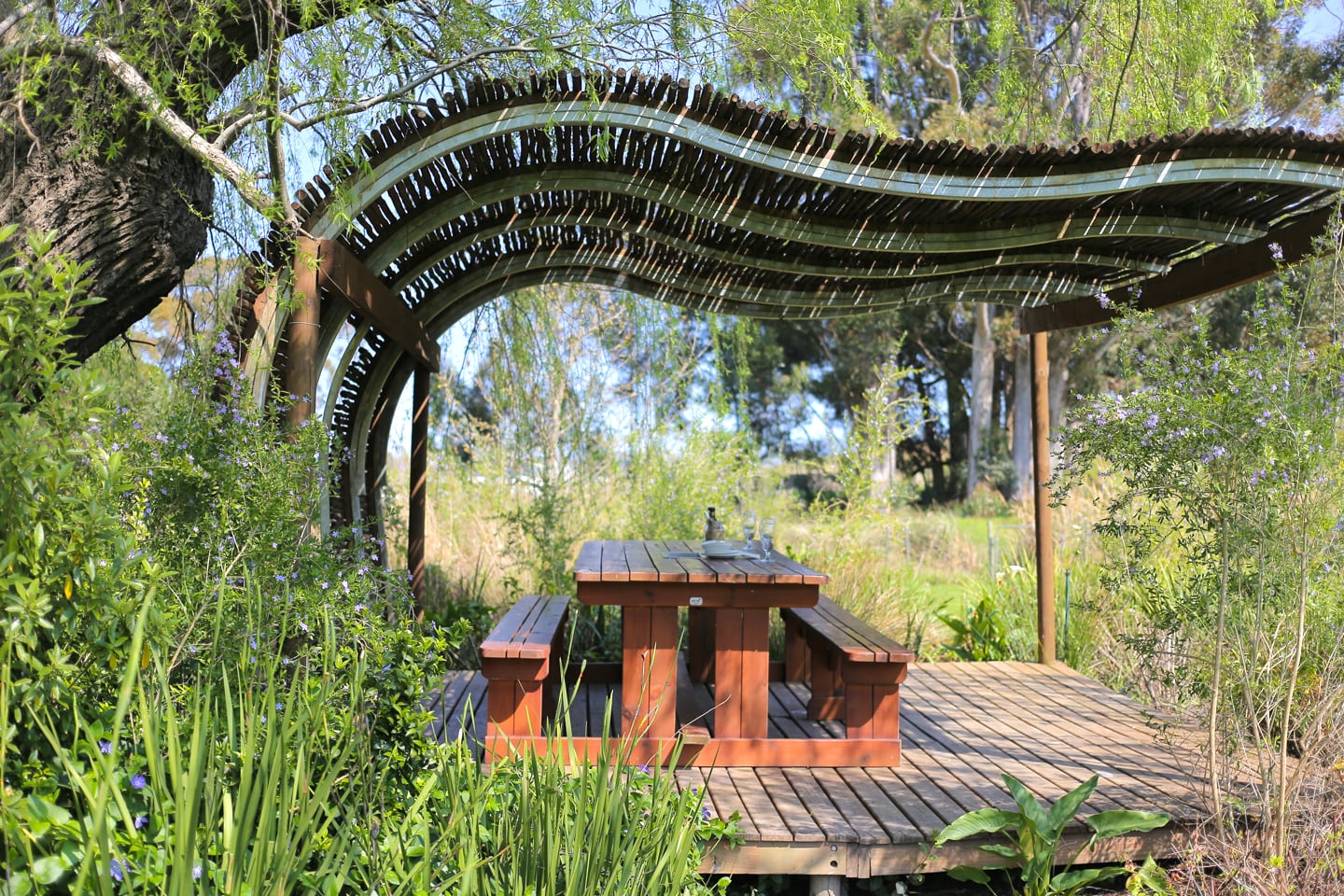 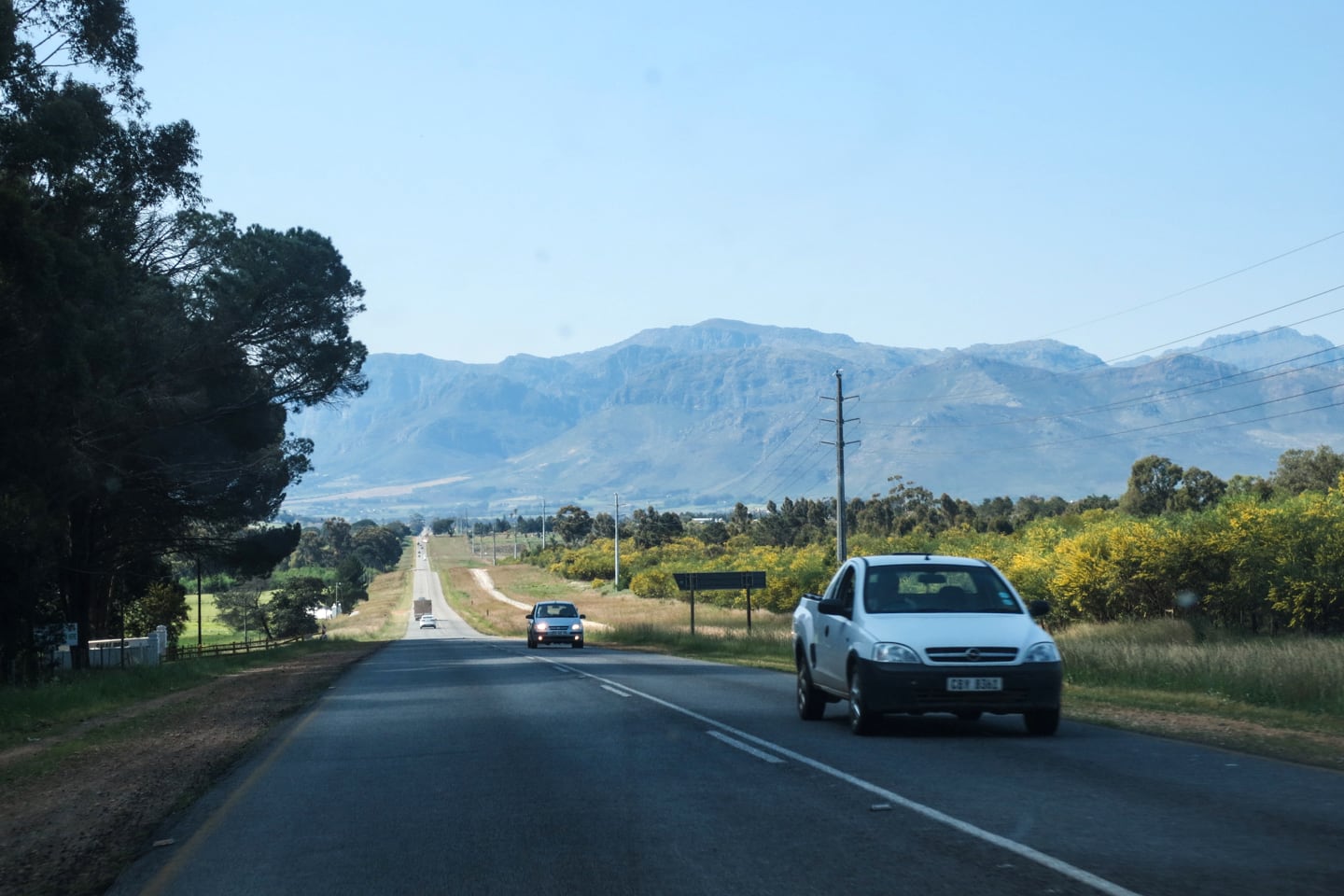 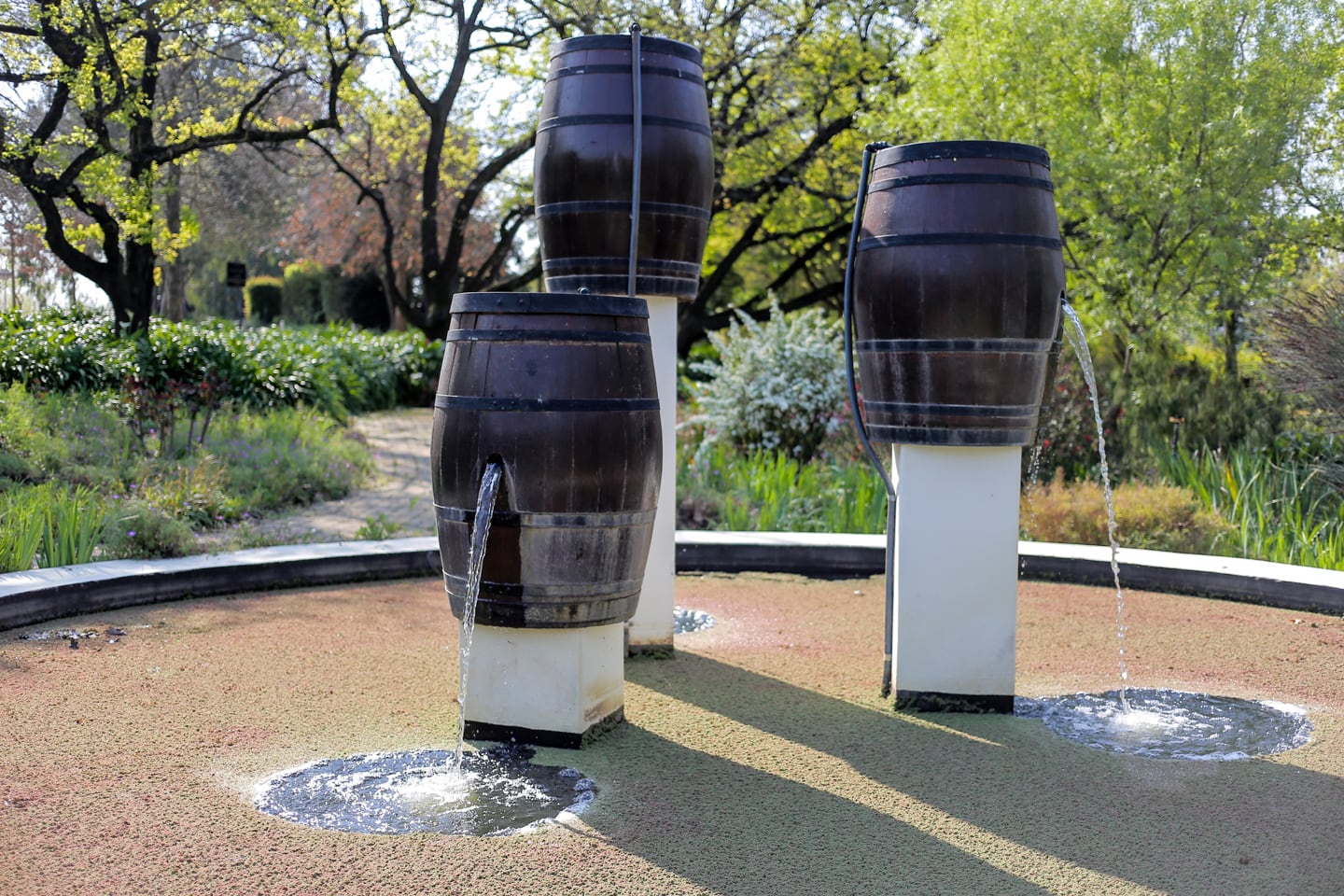 Our second stop of the day was at lovely Backsberg Estate near Paarl. 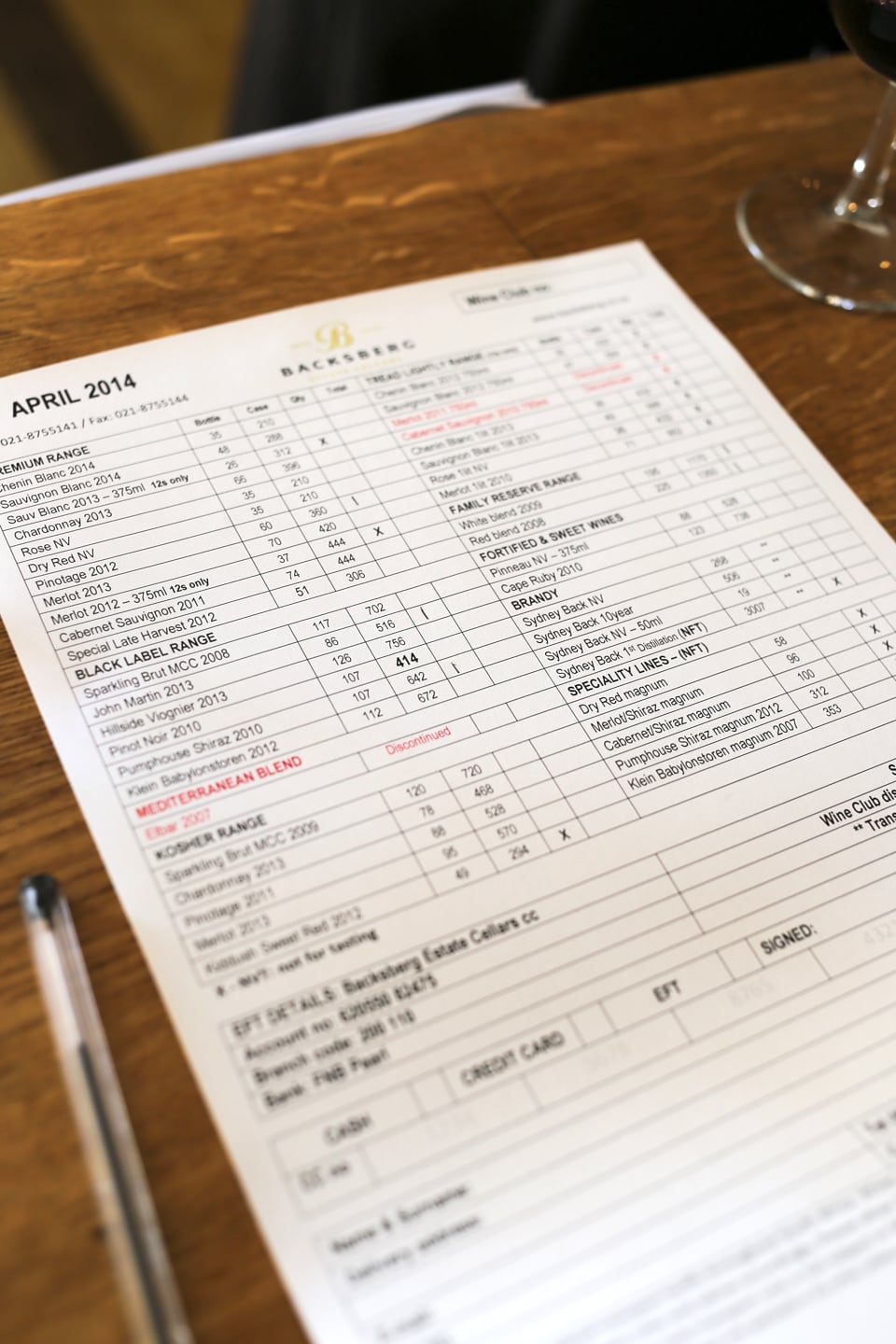 Backsberg is known for its renowned Pinotage, which is South Africa’s signature red grape. The grape is a cross-breed between Pino Noir and Hermitage, hence the portmanteau, Pinotage. You’ll find Pinotage across the Wine Lands, but our understanding is that few compare to Backberg’s. We liked it so much, we even bought a bottle. Price? Five tastings for US $1.36 (R15) (this time we shared a tasting) and US $5.45 (R60) for a bottle of topnotch stuff that easily would have gone for $25-$30 in the States. 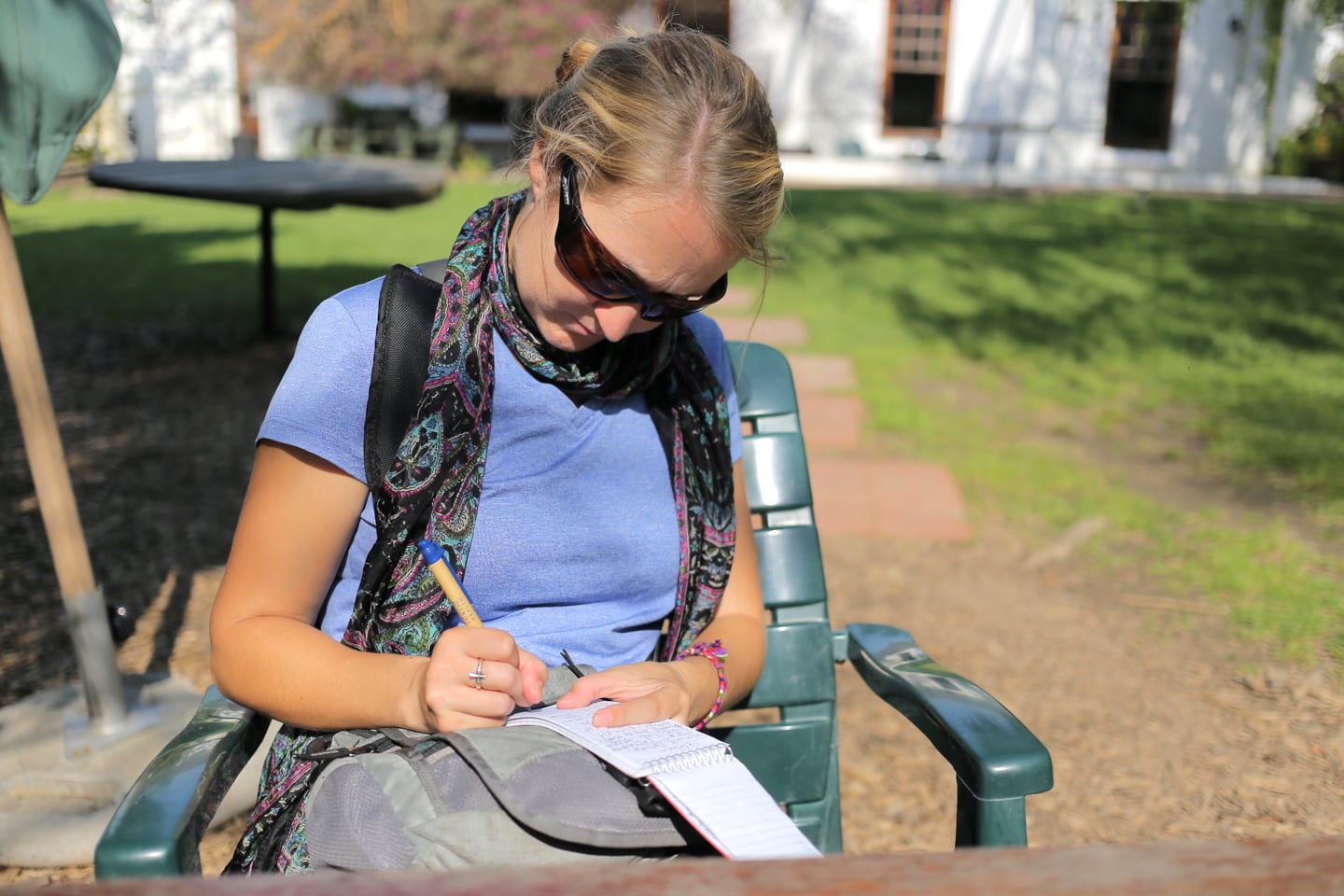 Above, Lori, studiously keeping track of expenses and winery info. Below, our delicious cheese (and pâté, which we were less excited about, but good and certainly novel, nonetheless) 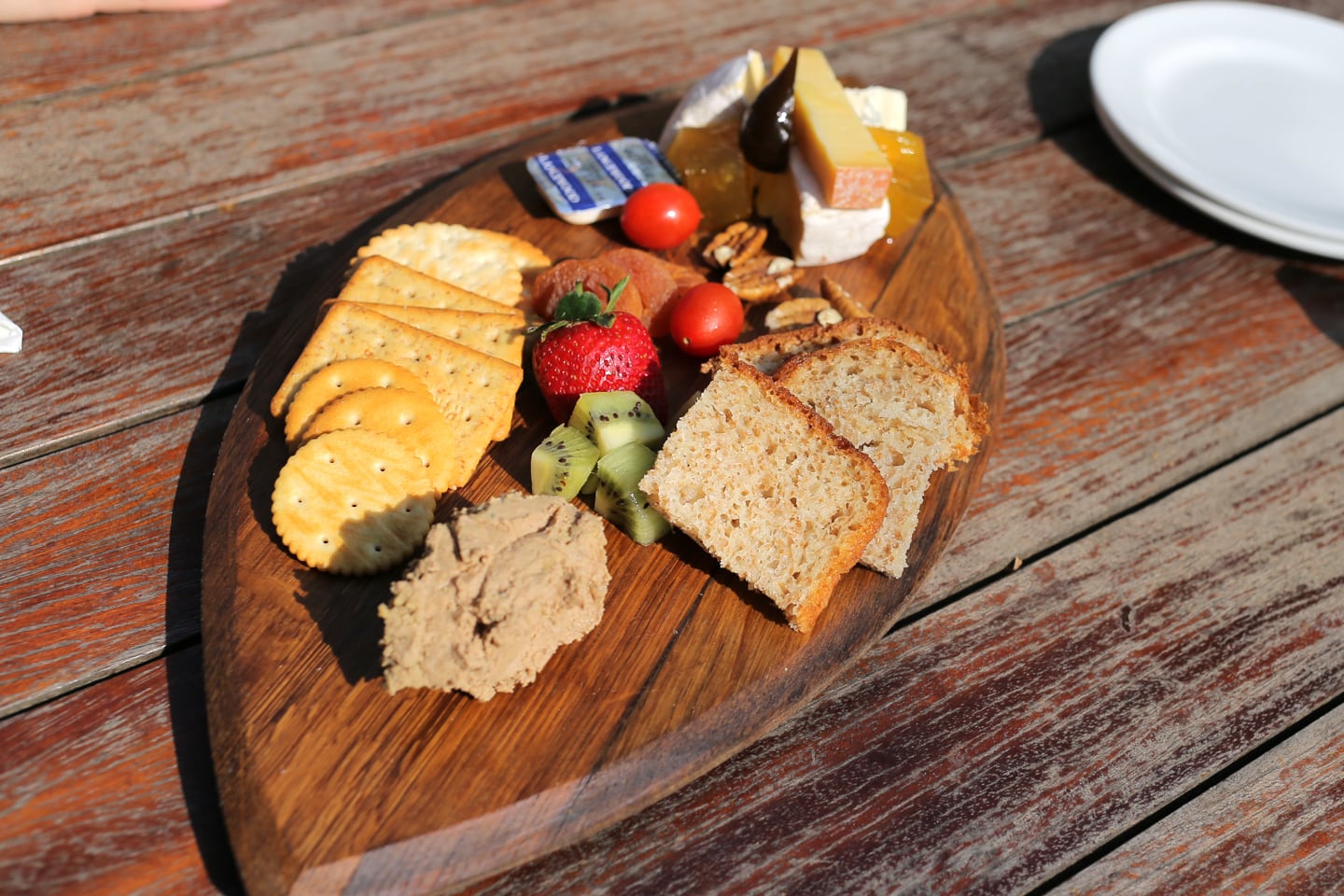 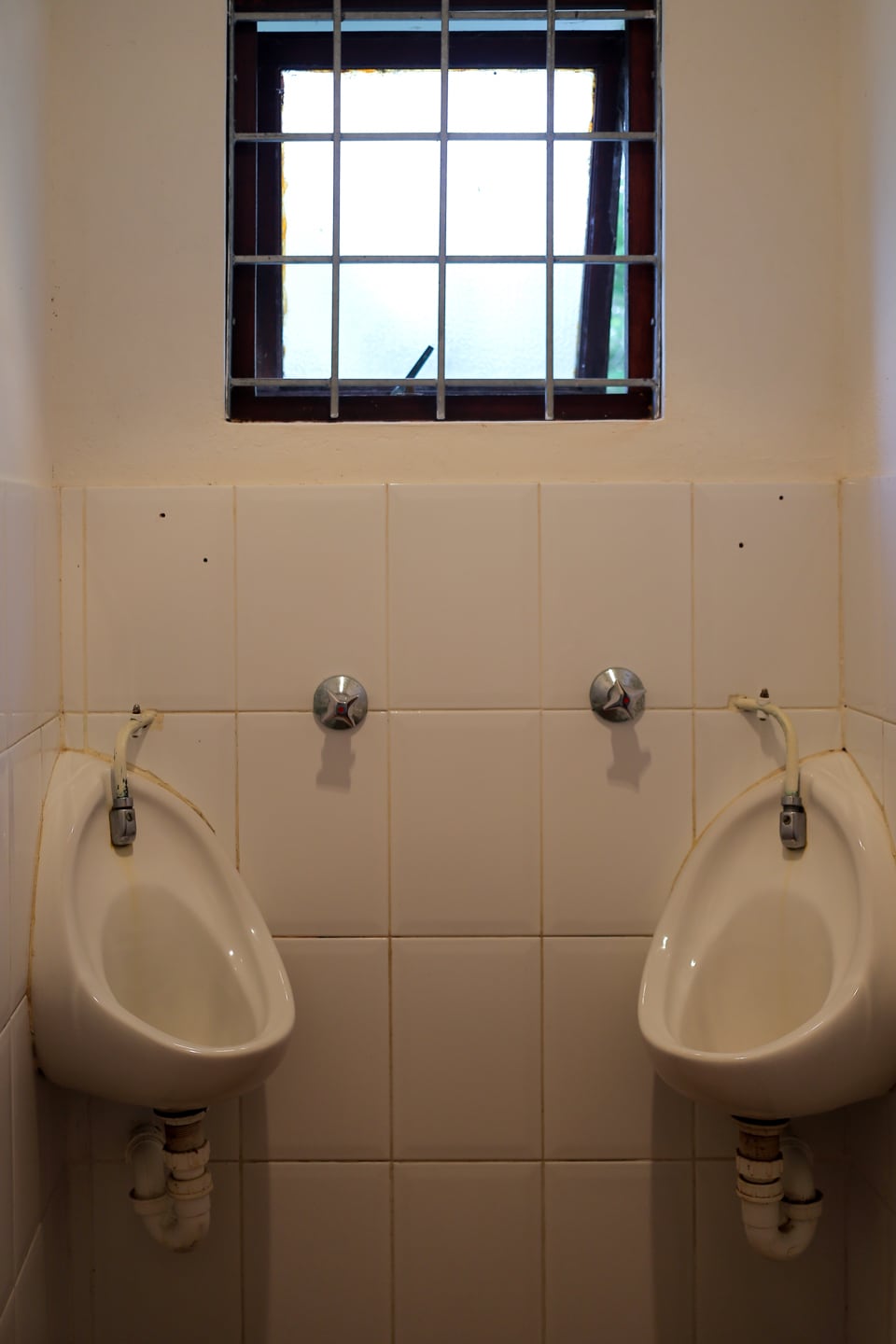 The wine was excellent, though the quarters were…dare I say…a bit cramped in the Gent’s room. 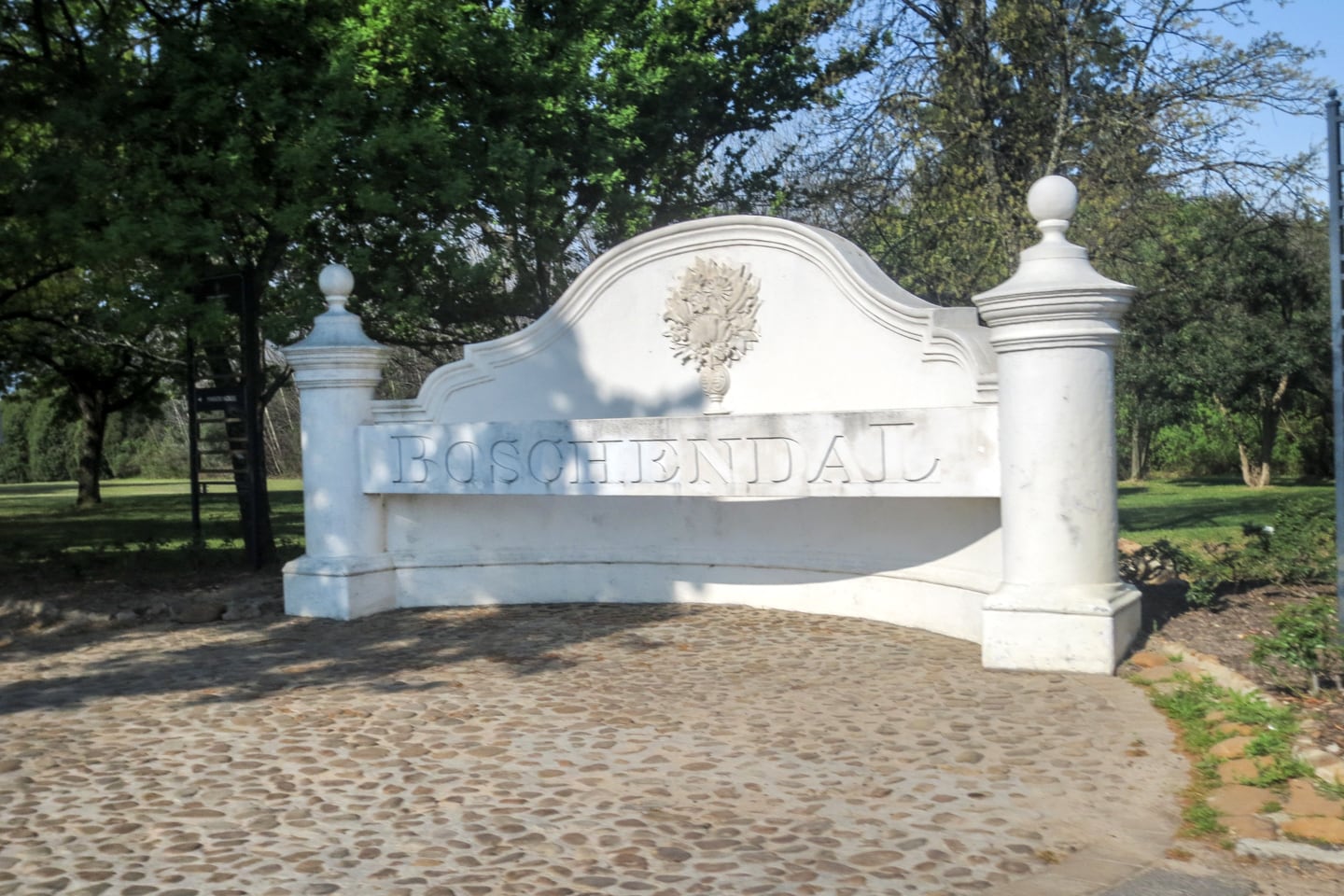 Our final stop of the day was the oldest wine estate in South Africa (established in 1685 by French Huguenots, though it didn’t begin producing wine until much later), Boschendal Estate outside of Franschoek. Lonely Planet described it as a “quintessential Winelands estate with lovely architecture, food and wine.” And in my opinion, they were spot on. A very fine place to end a perfect day. 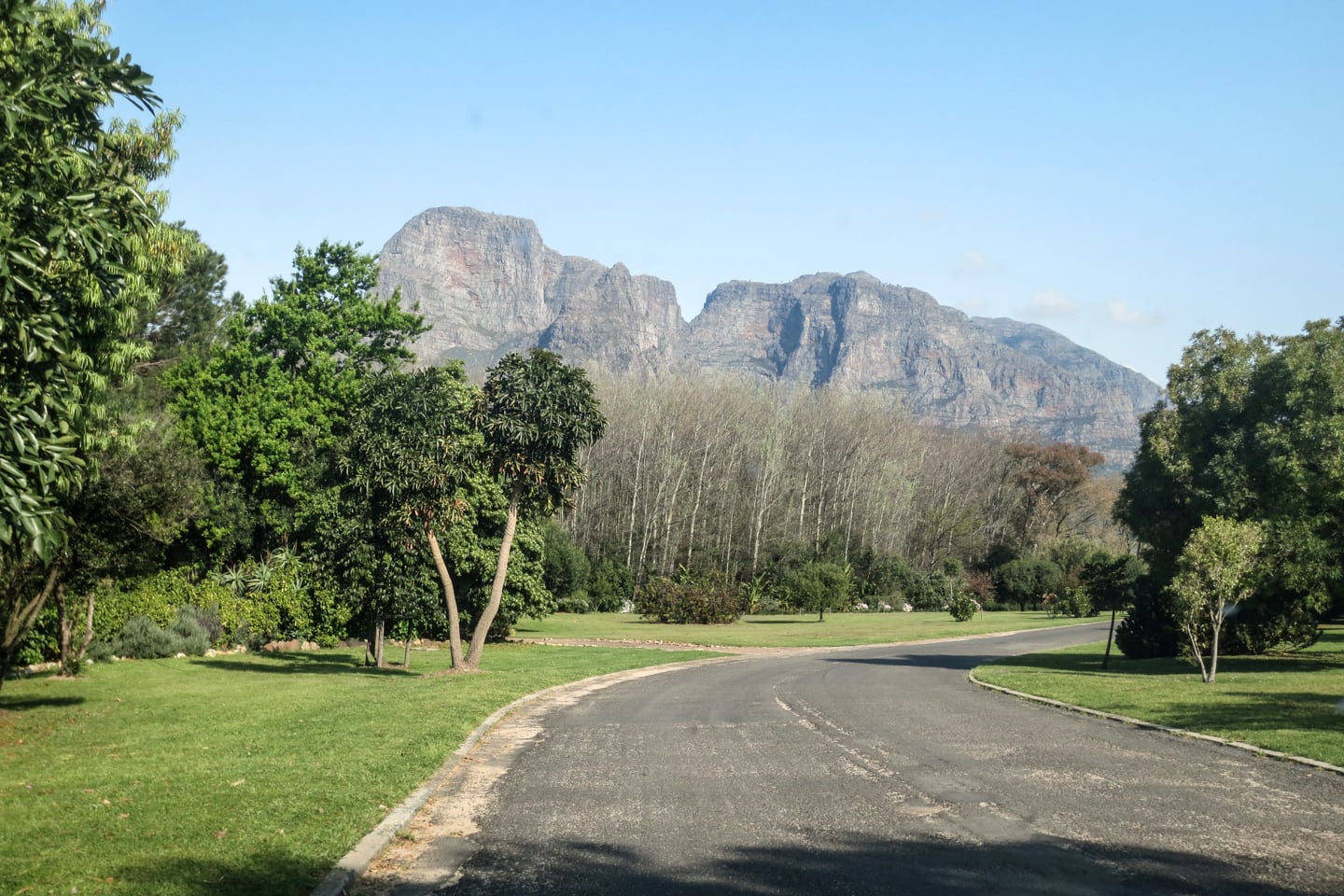 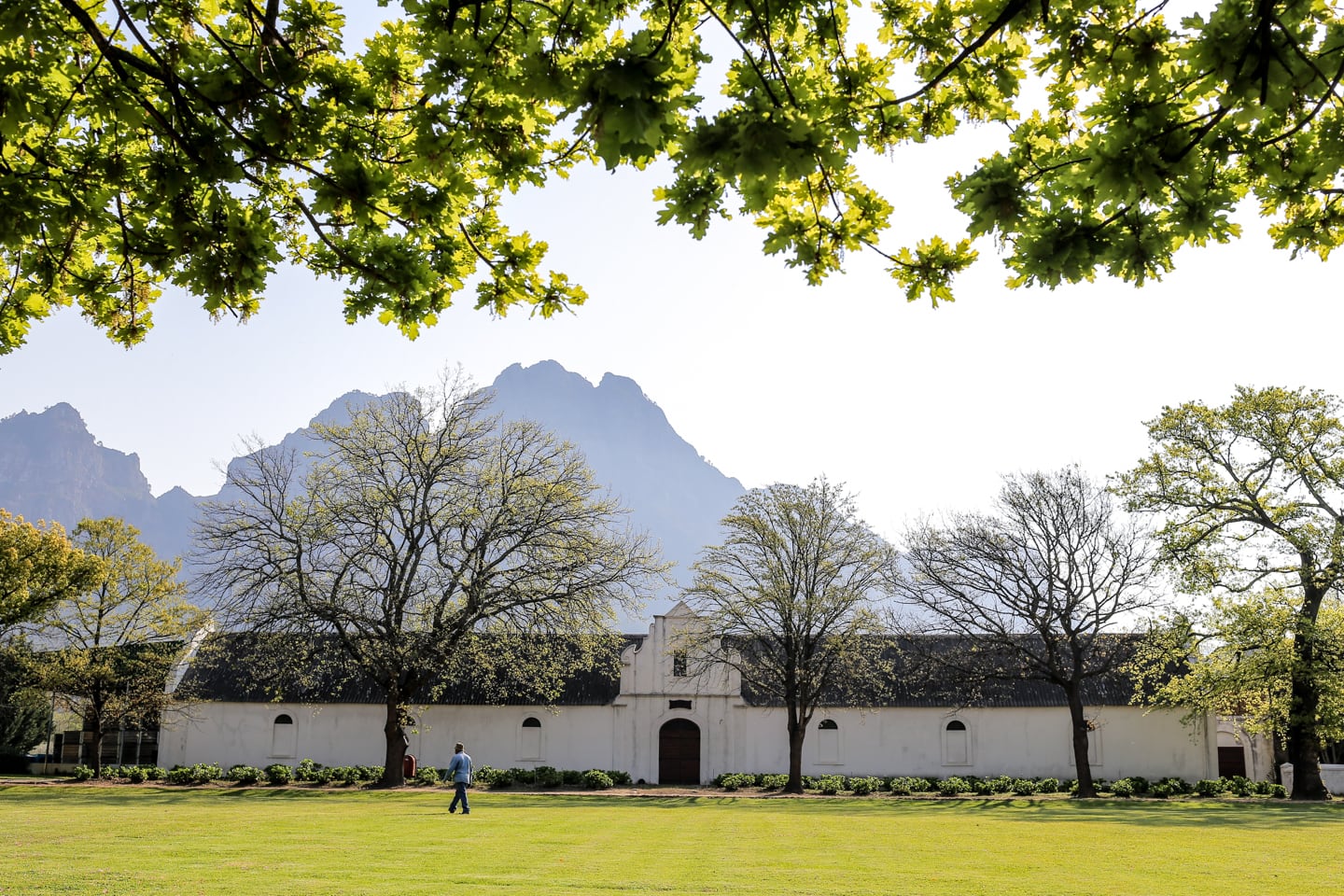 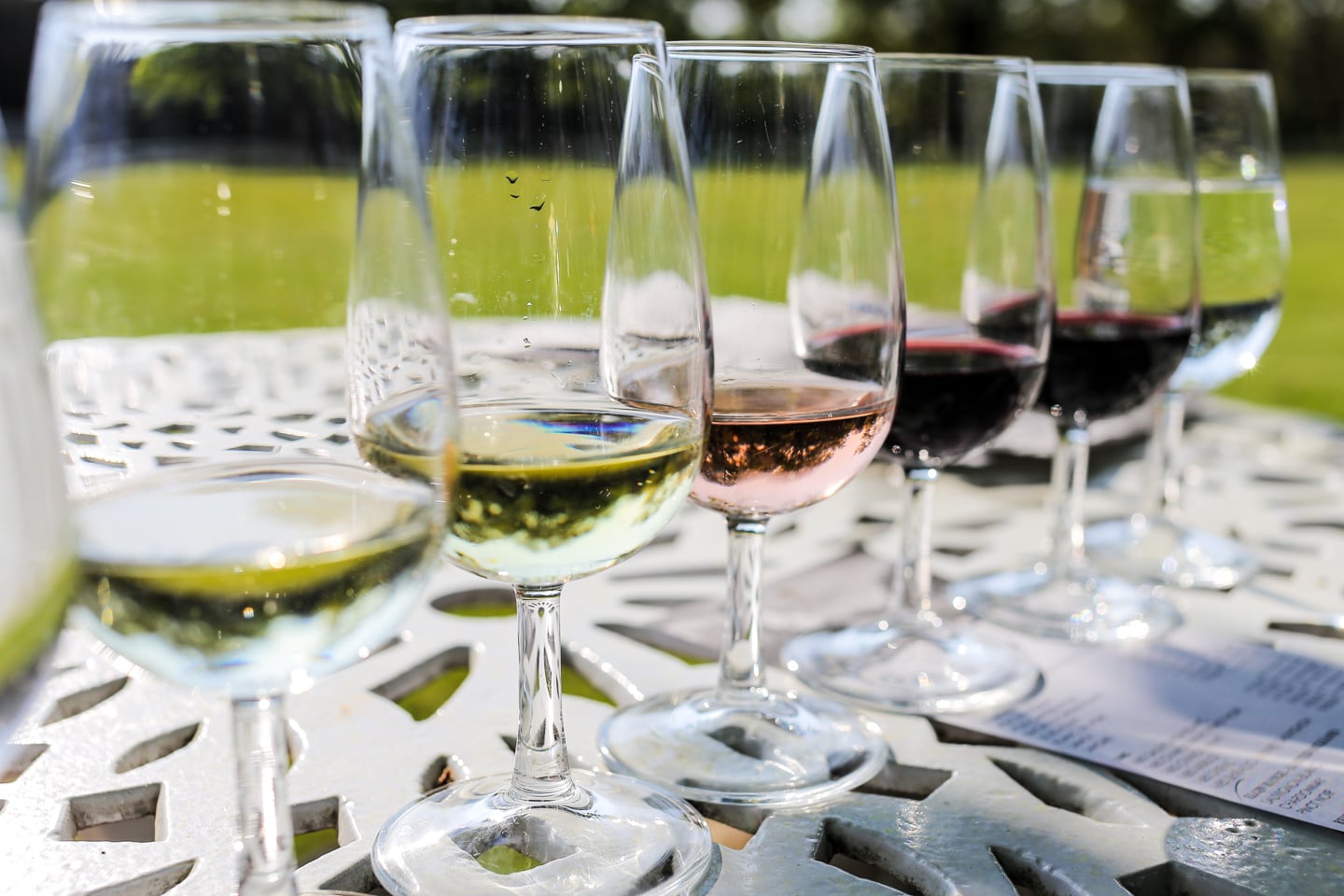 The rundown: Five tastings (we picked two whites, one rosé and two reds) — US$ 3.18 (R35) for one tasting. We picked this combo because they are known particularly for their whites and rosé. 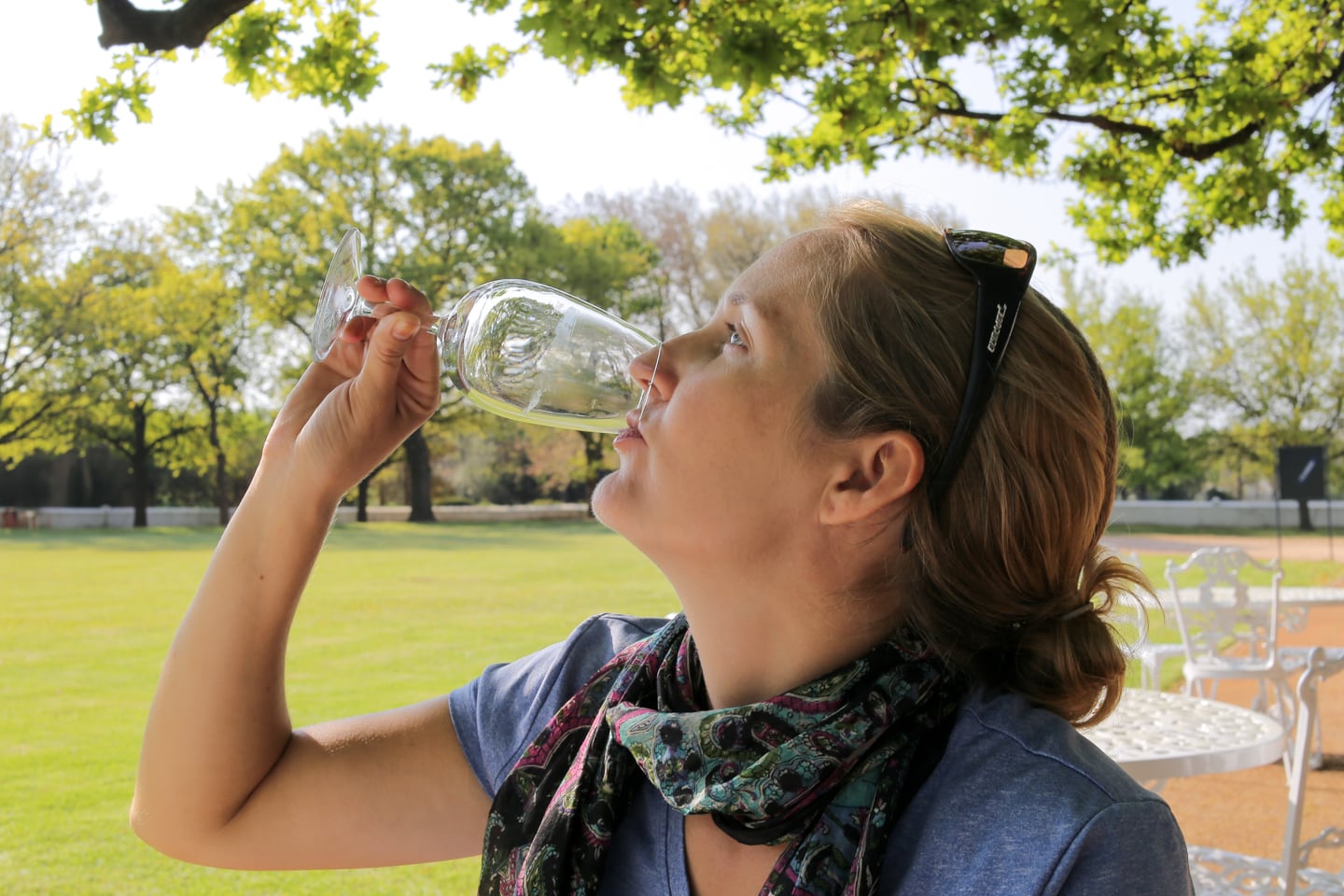 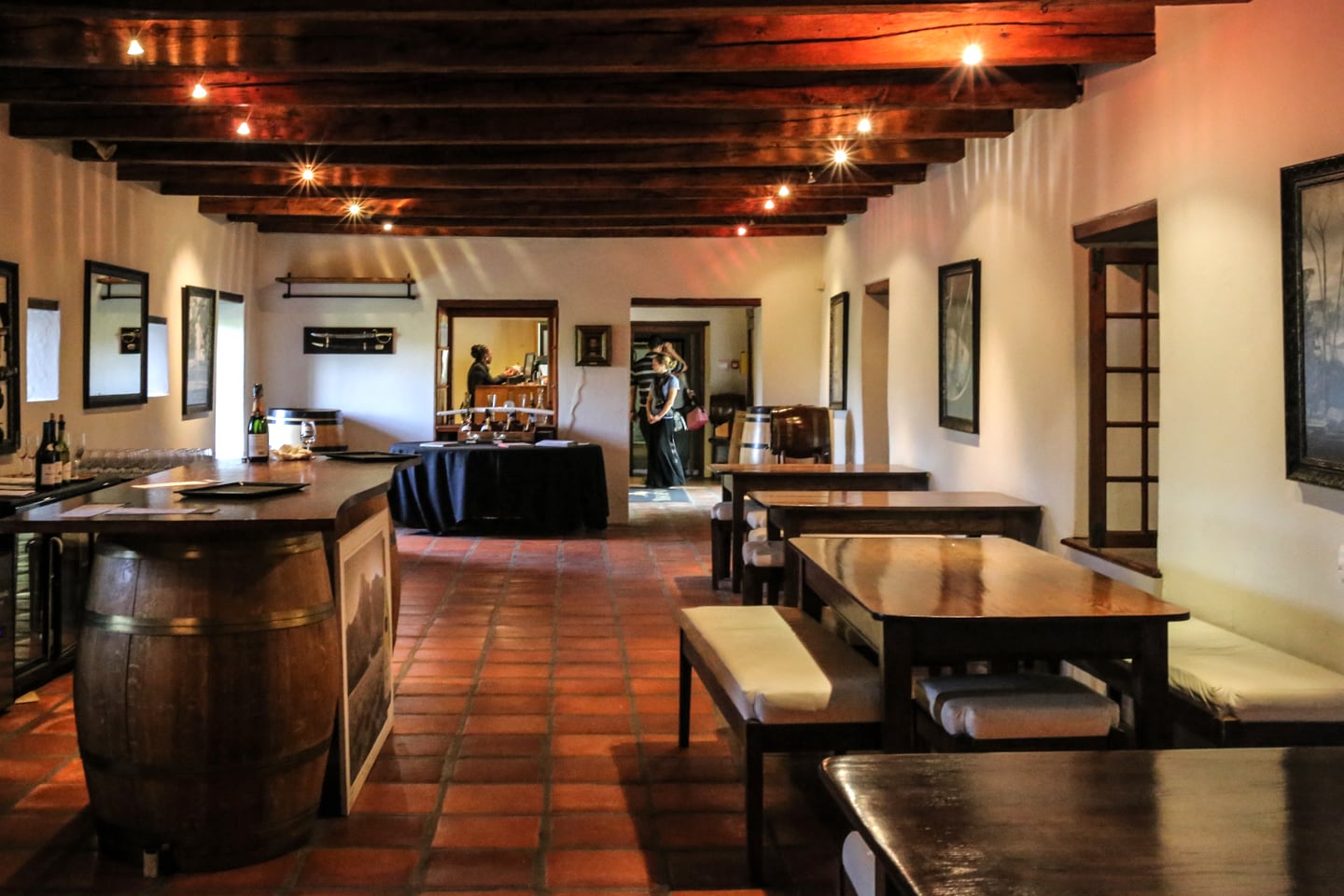 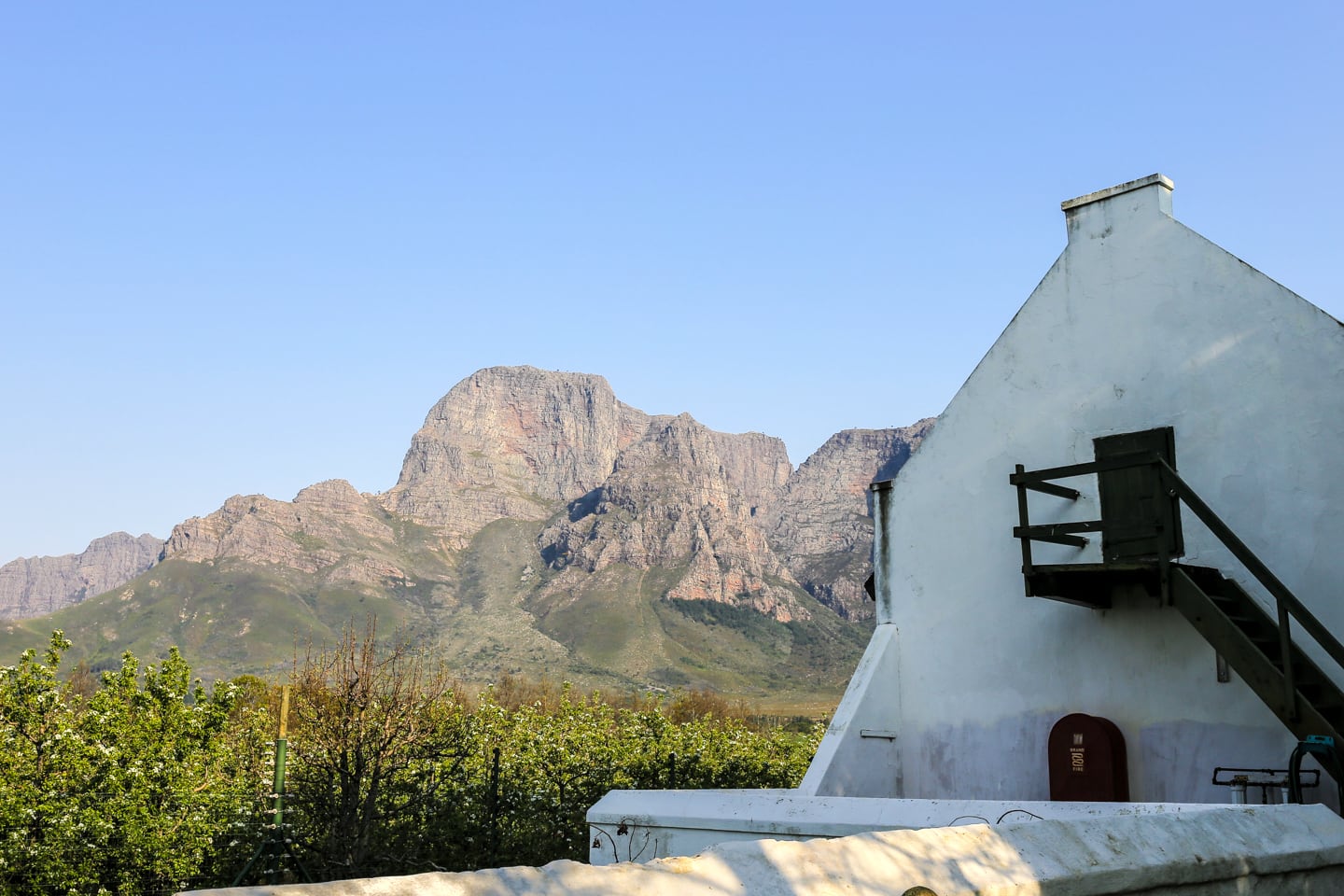 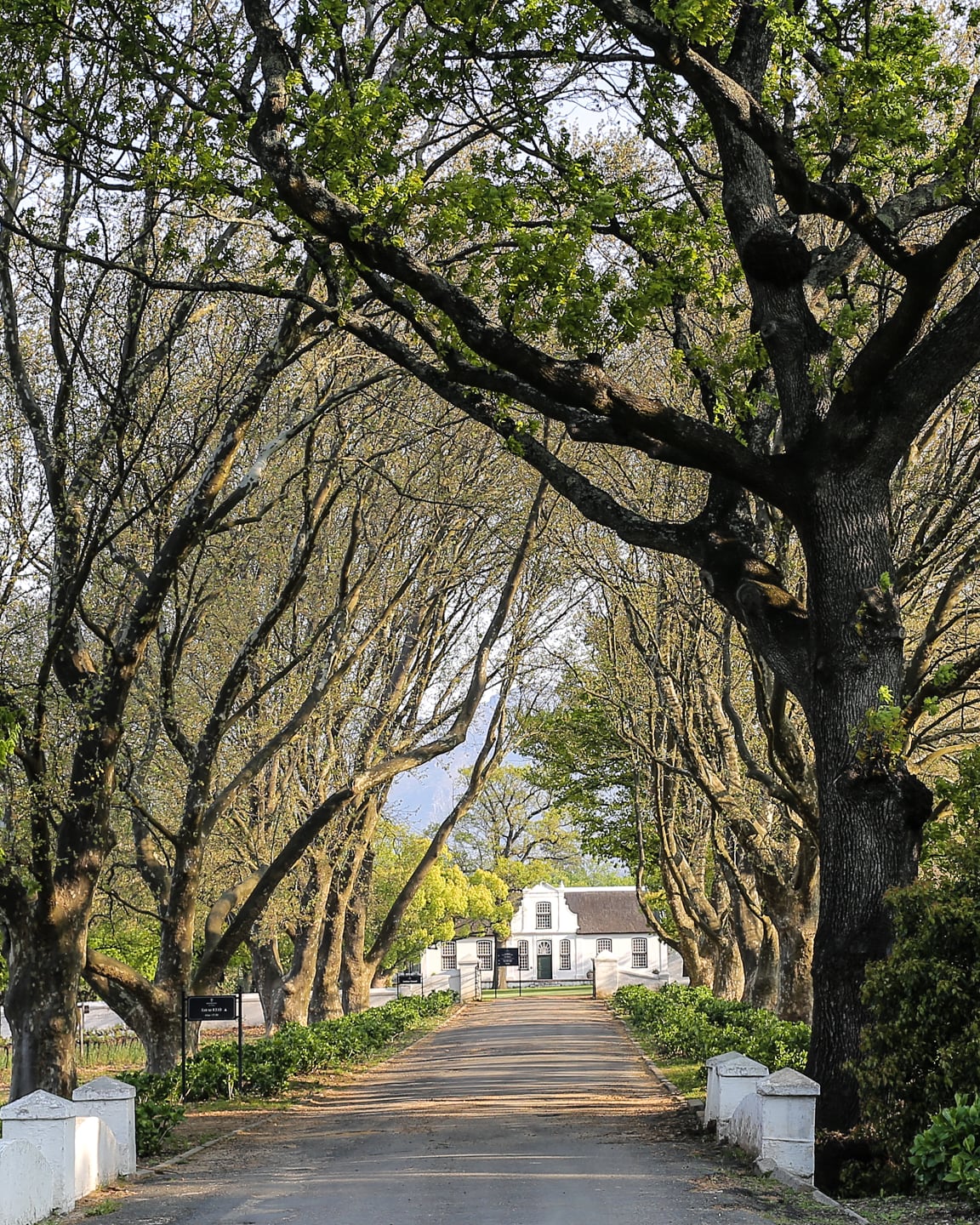 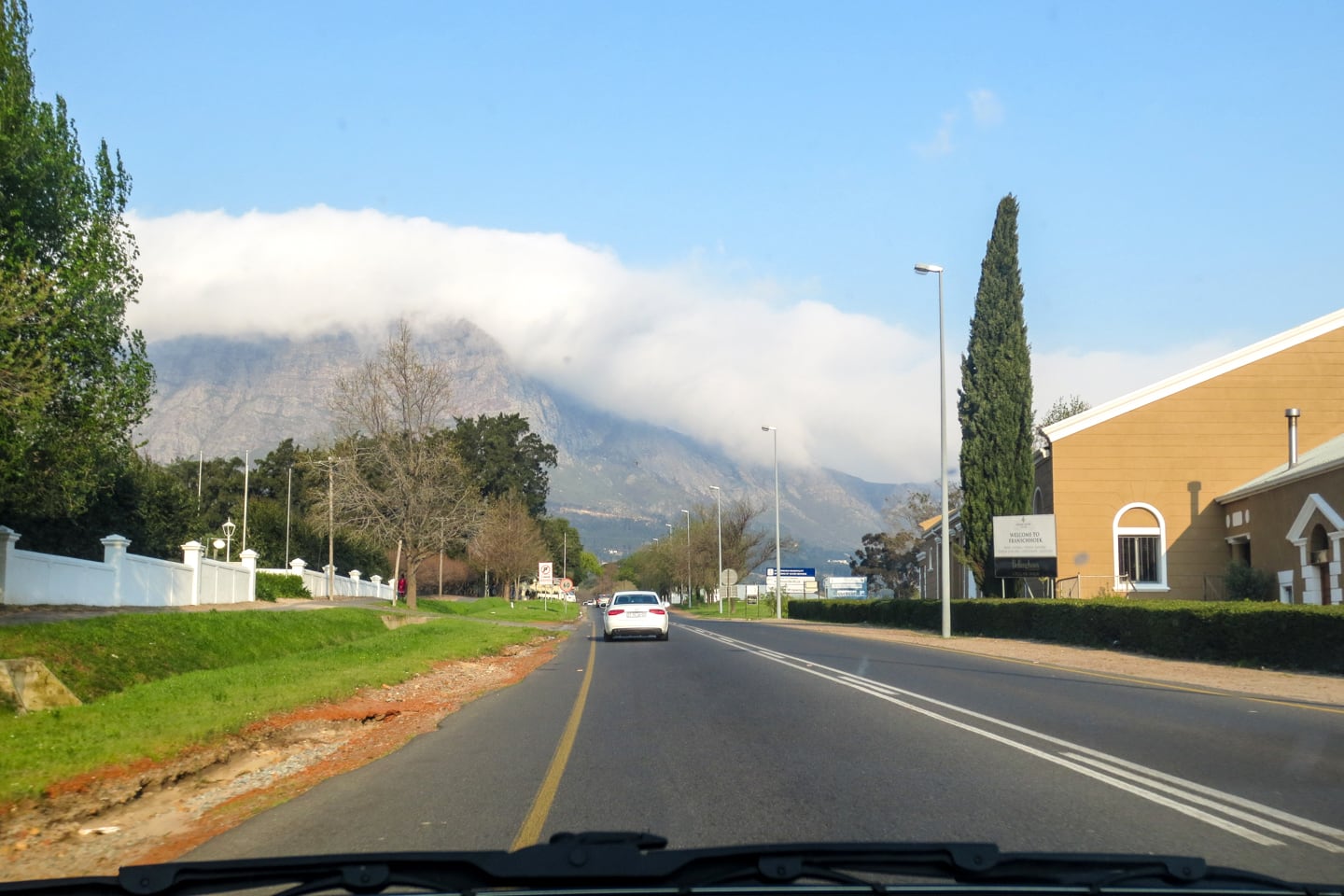 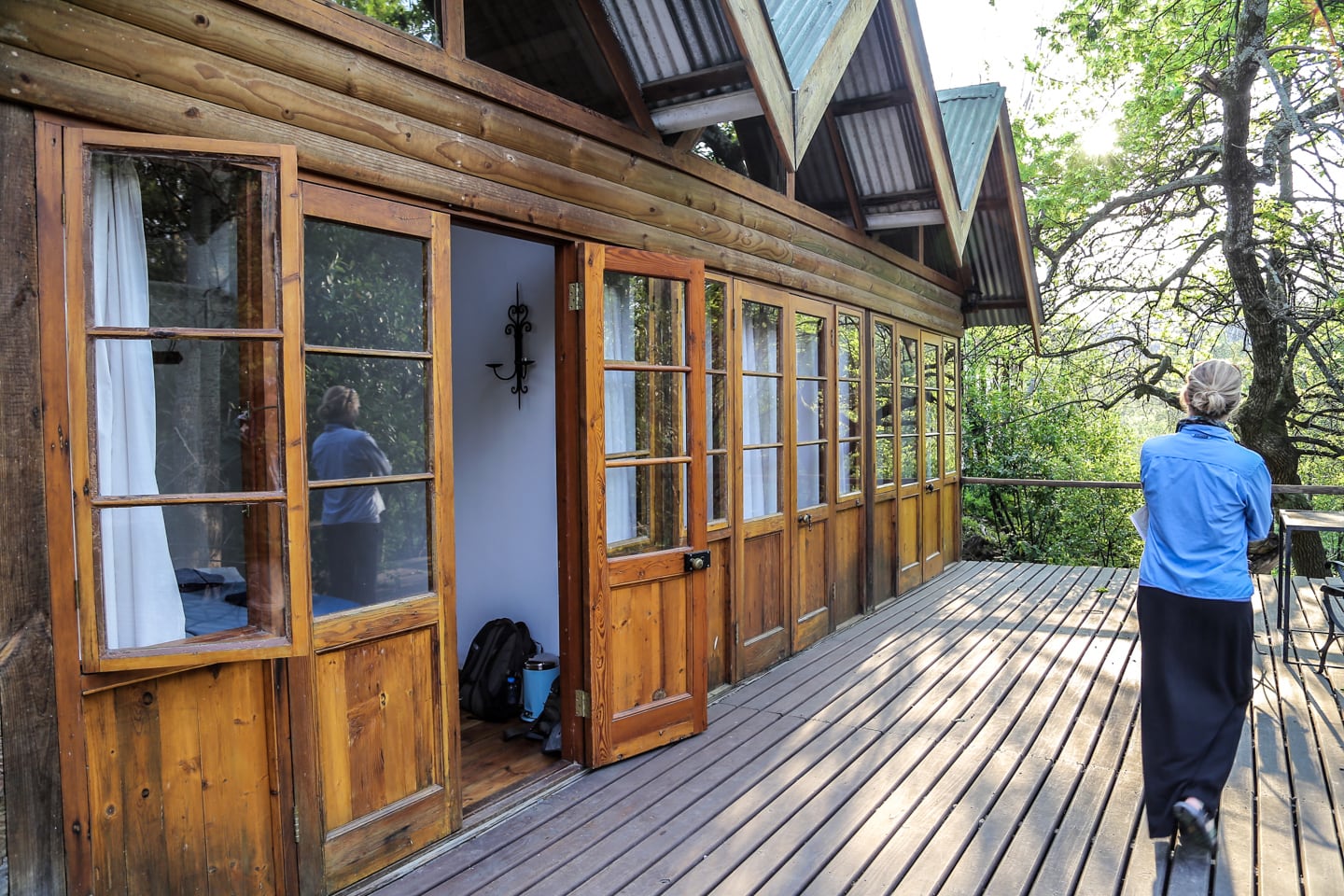 After a lovely day of doing something we’ve only dreamed of doing for the past 12+ months (wine tasting!), we retired to the rustic and peaceful, yet comfy Otter’s Bend Lodge only minutes away from central Franschoek. 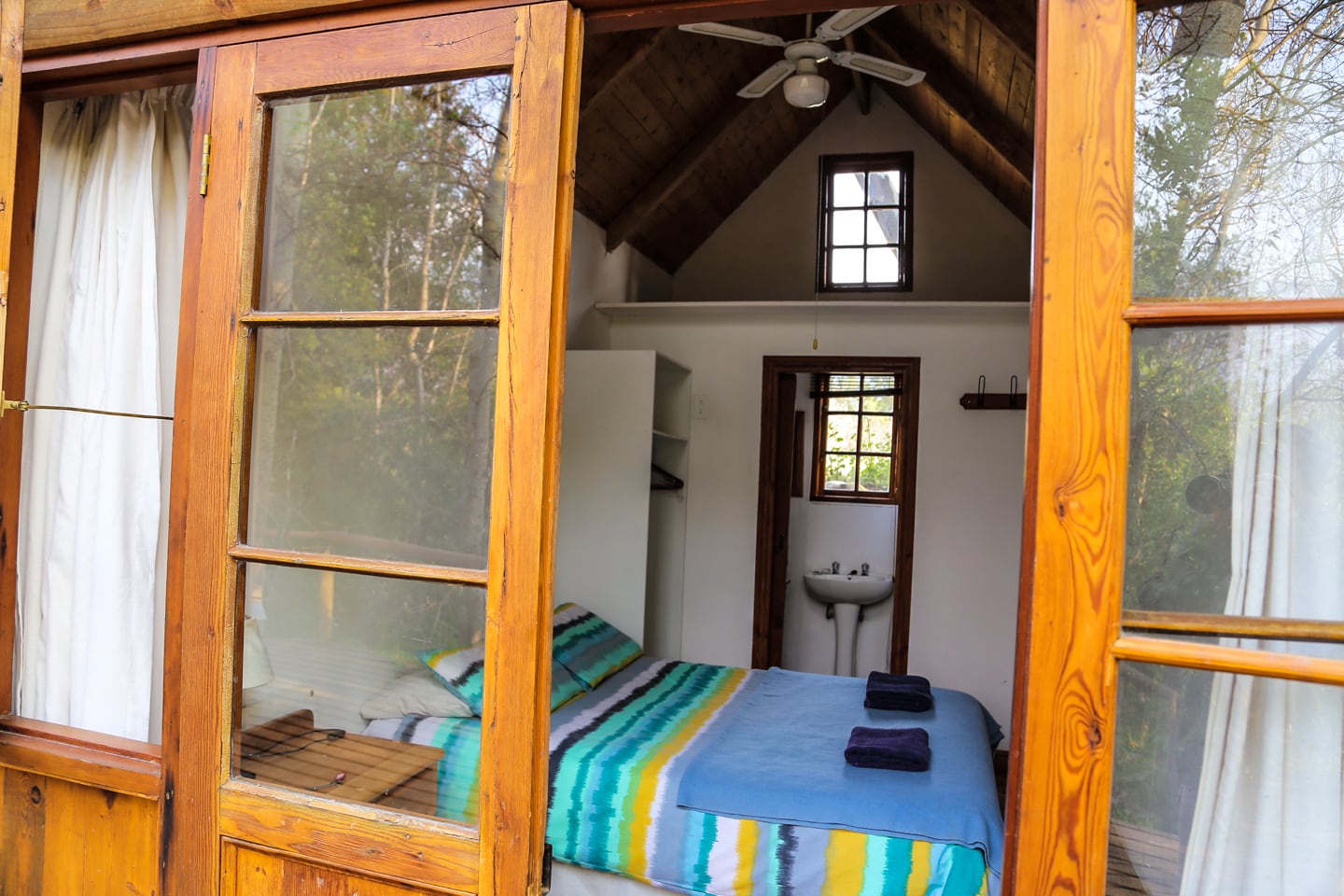 The place was great, and some of the deepest and best sleep I’ve had in ages, but the weather was bloody cold. I fell asleep to the sound of the howling wind (very cool) and my own teeth chattering. We made use of the electric heater, but were not prepared for the chilly morning which lay ahead (especially after coming from a year in the Belize!). Something familiar and strangely comforting, yet at the same time, incredibly discomforting about cold mornings. Luckily, the shower was both scalding hot and amazing. 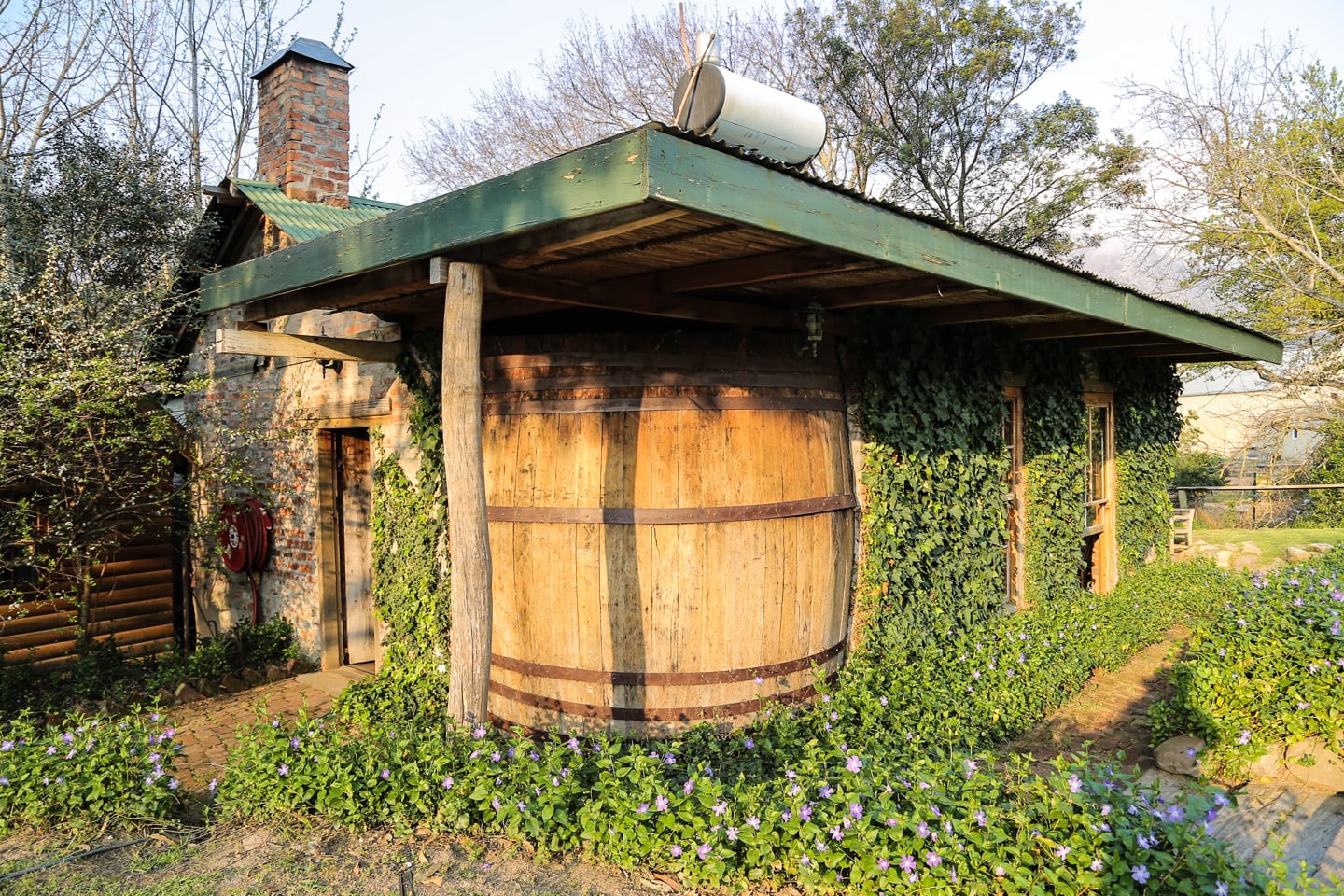 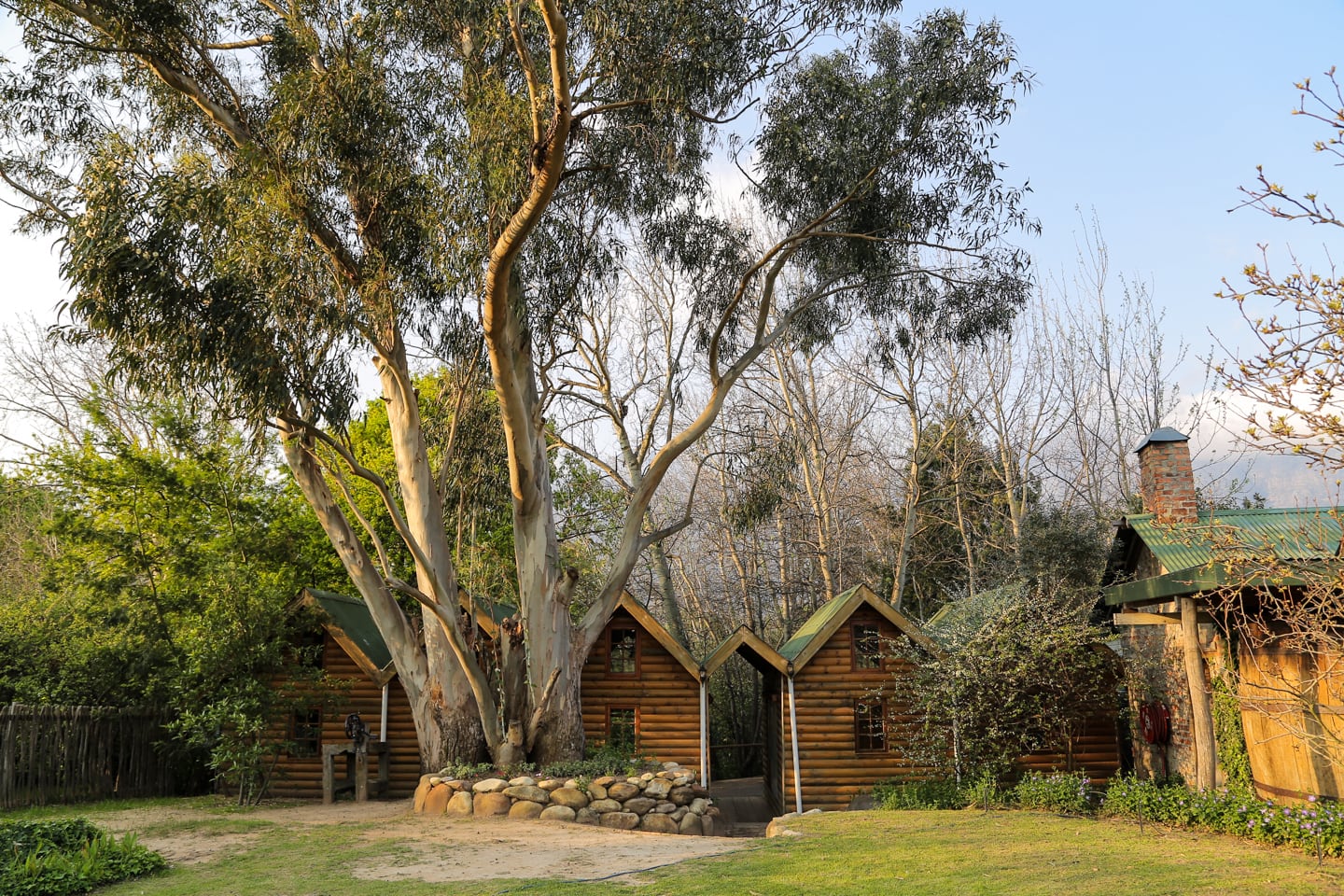 And lastly, I couldn’t end this post without giving a shout out to Kalfi’s Restaurant in Franschoek. We walked around the entire town in search of dinner and as far as we’re concerned, this is the place to go in Franschoek. The price was right, the atmosphere is just what we were looking for and the food was delicious. It happened to be Monday, which meant 2-for-1 burgers with a purchase of two beverages! We got two mammoth gourmet burgers with chips (fries) and two cups of Rooibos tea (originally from Southern Africa) US $8! A deal most places, but certainly a steal in Franschoek. Yum. 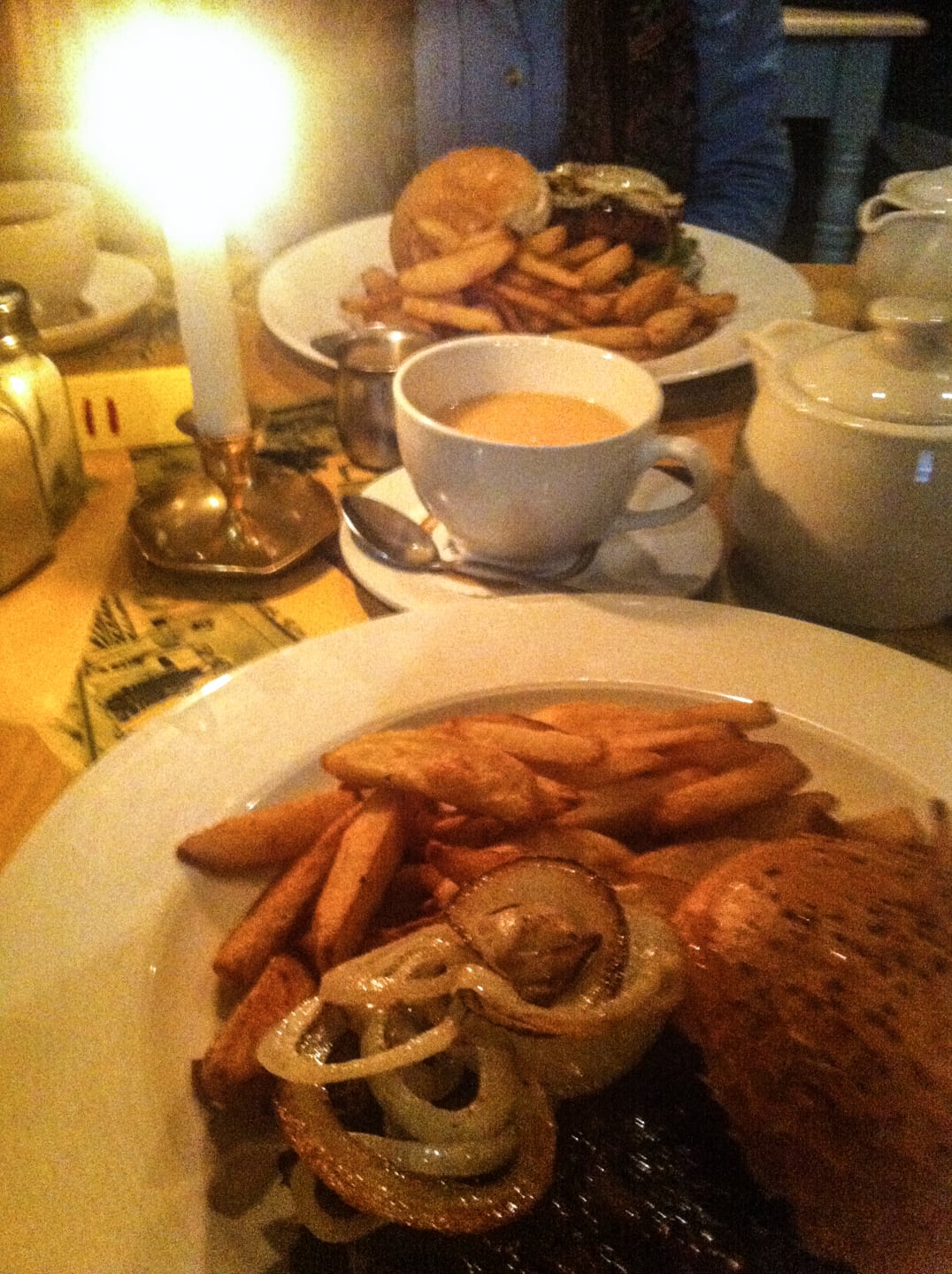 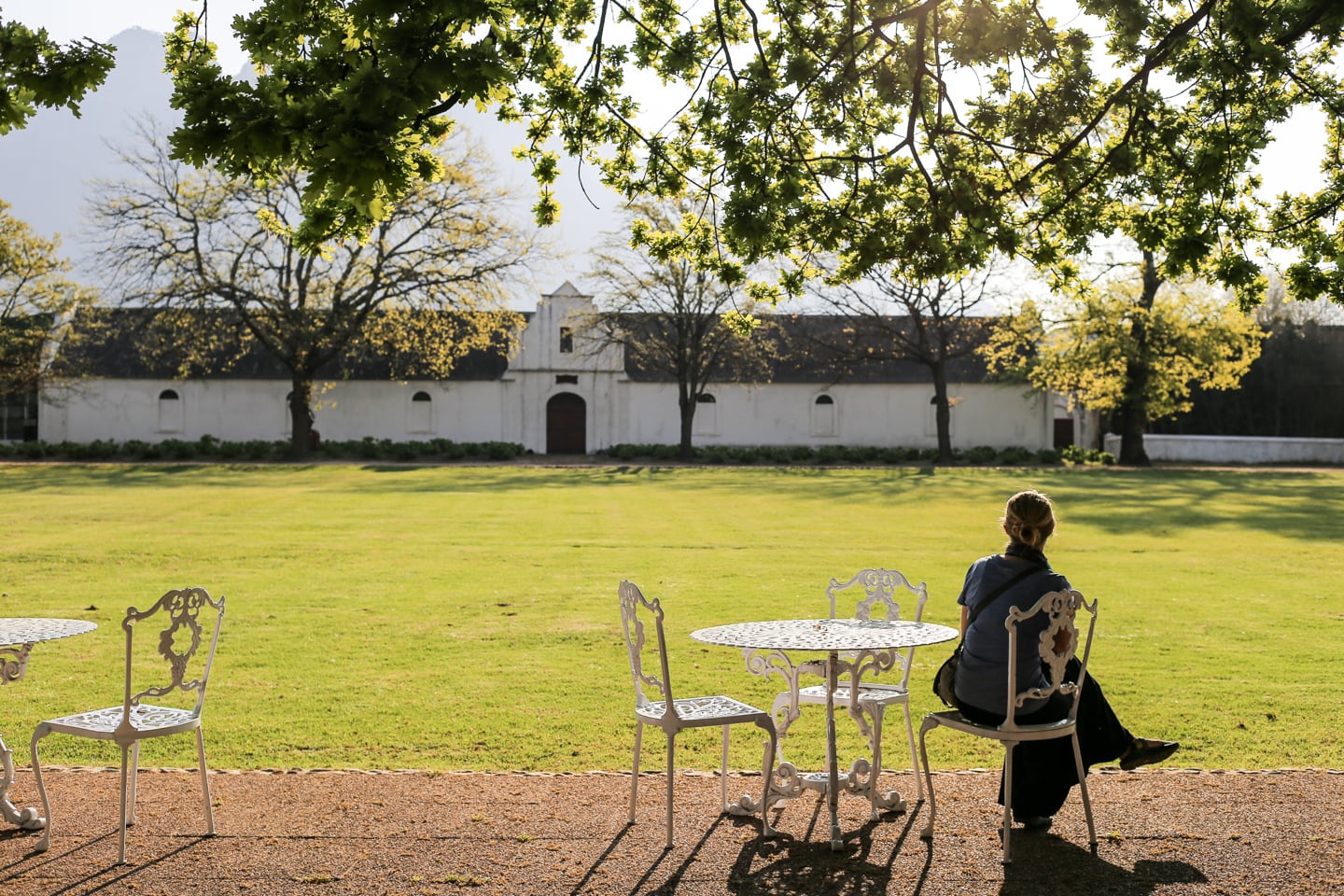 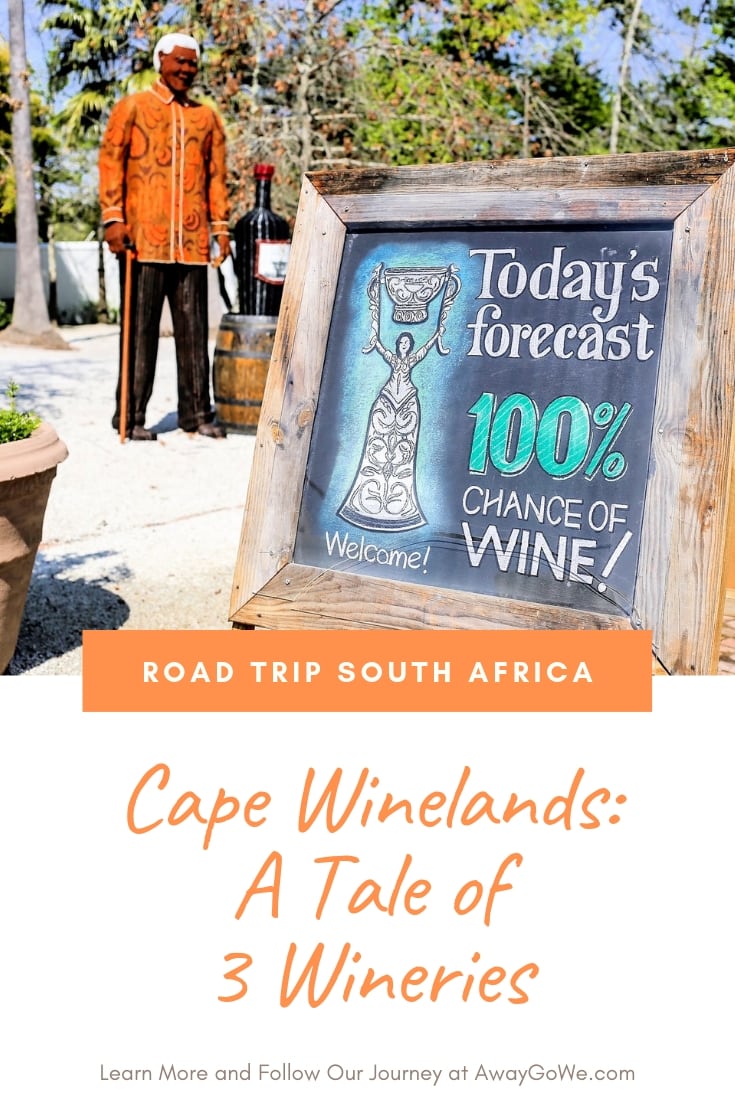 Wow – what a great day! And the prices are certainly right.

We will be touring that area either next year or the year after so will certainly visit these 3 wineries!