Part one of hiking into (and out of) the world’s second deepest gash, Colca Canyon.

Lori and I took a taxi to the bus station at 5am to buy our tickets to the village of Cabanaconde to hike the world’s second deepest gash, Colca Canyon. Information on hiking the canyon was hard to come by, but we had heard that many hikers trek solo to the bottom and we wanted to do the same. For this reason, we opted for local transport rather than a tour bus, and were ultimately very happy with our decision to do so.

After loading up on bus station goodies, we hopped on the bus loaded with locals, as well as a few other travelers. We noticed that many of the local people were wearing traditional attire, large, flowing skirts and embroidered tops and hats (fishing hat or top hat style). 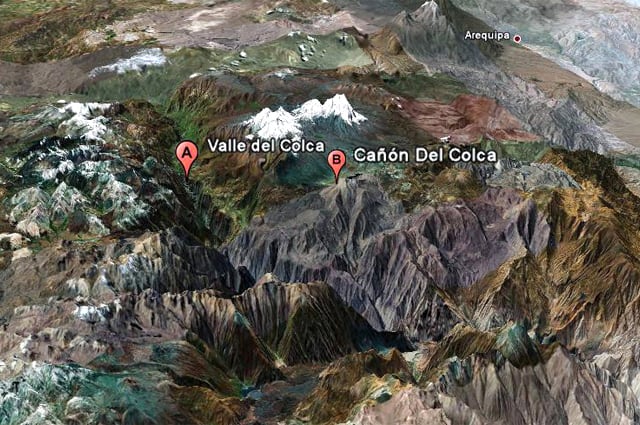 Our transport today was one of the Andalucia line’s beat-up workhorses with big, off-road tires, a bus that had certainly seen better days. We grew to respect this bus and all it had went through, and the bus driver who obviously had balls of steel and knew his stuff.

We soon left the pavement behind and started gaining altitude on some curvy, dirt roads. I was surprised that Lori managed to sleep through a 16,000-foot pass, a few stops, and many, many sharp turns. 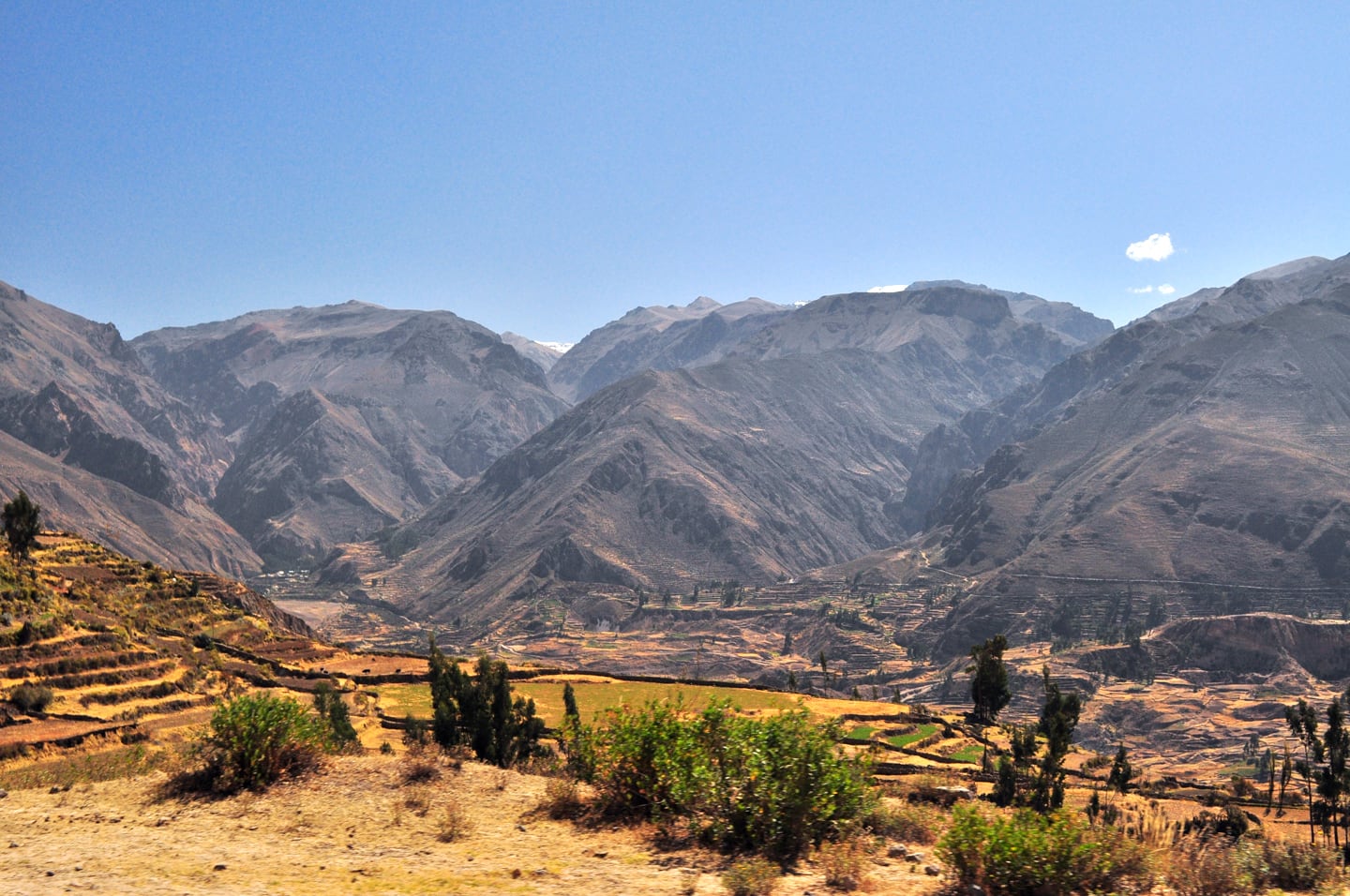 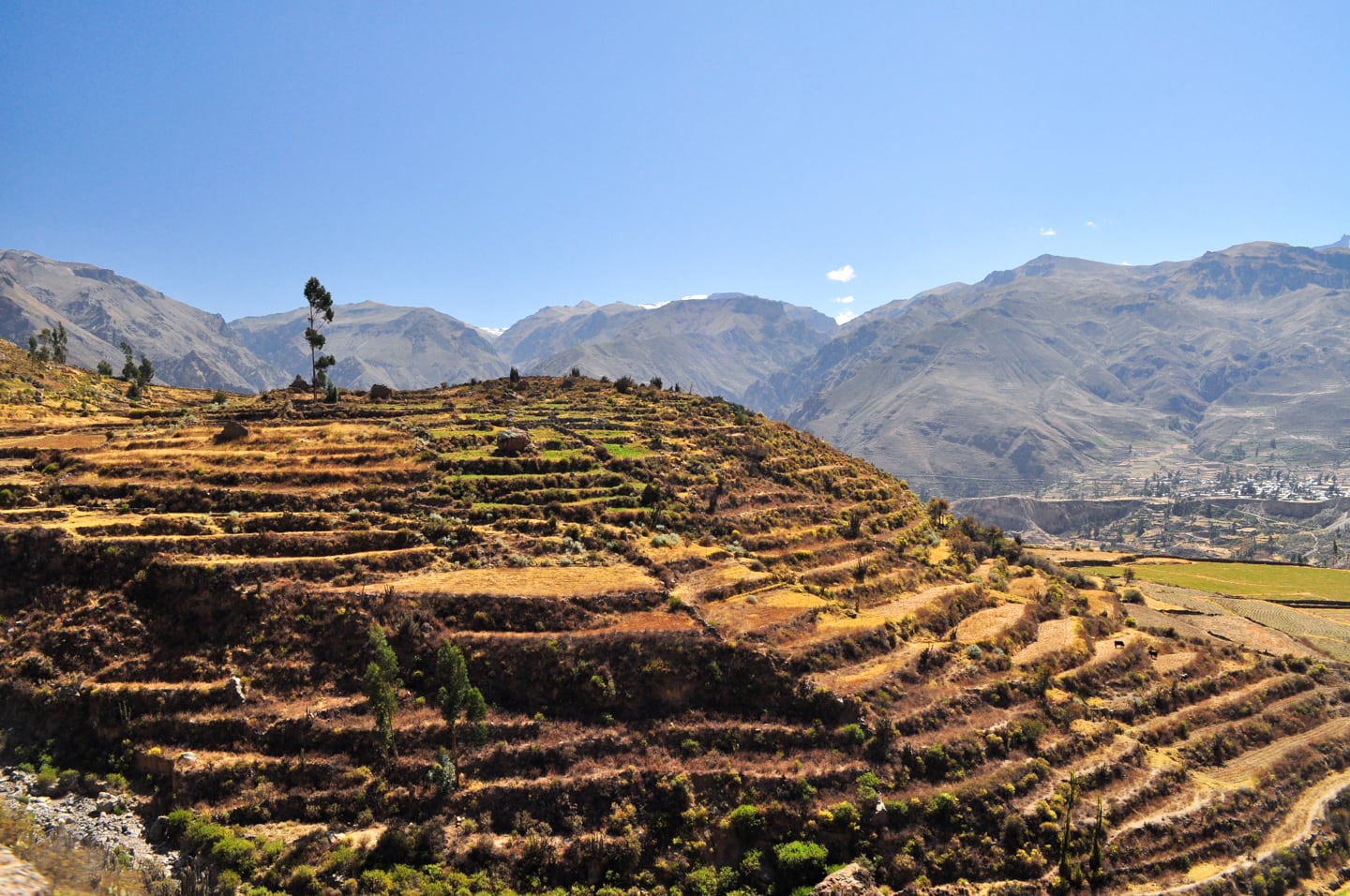 The Altiplano was beautiful, but at around 15,000 ft. I began to feel the effects of the high elevation for the first time while Lori slept like a baby. We dropped 4,000 feet down into Chivay in a matter of about 15 minutes. The road was winding, yet paved, and when we finally reached Chivay I felt a broad sense of relief knowing that the next time I saw that road, we´d be ascending slowly. Little did I know what lay ahead…

After Chivay, we quickly left the pavement again (permanently this time) and embarked on three white-knuckled hours of hugging the edge of the high canyon walls. We raced along the winding one-way dirt road, through small towns and long crude one-way tunnels at a sobering pace. 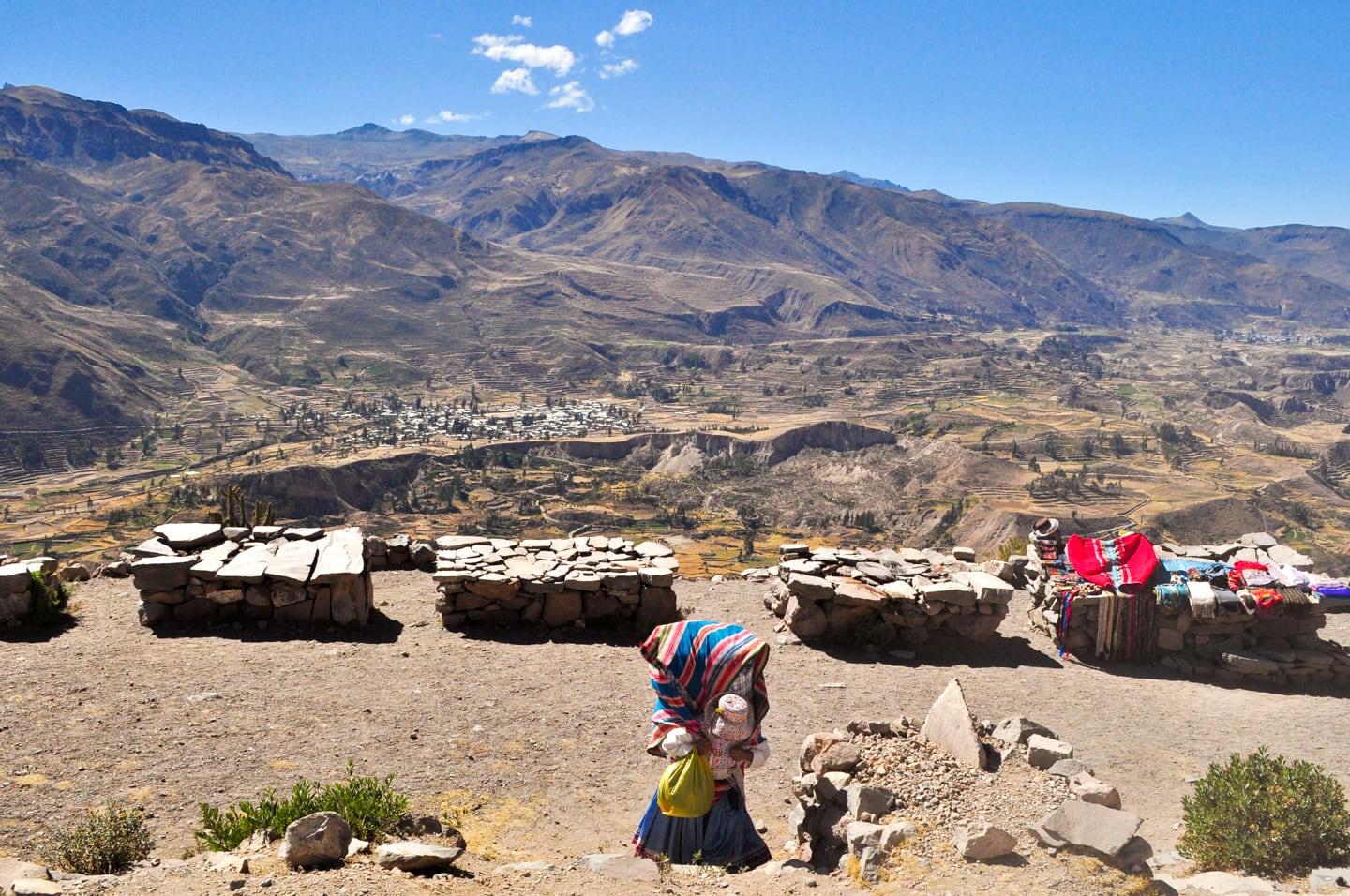 Cabana woman catching the bus home after a long morning of selling souvenirs to tourists who had come to see the mighty Andean Condor soaring on the canyon breezes. 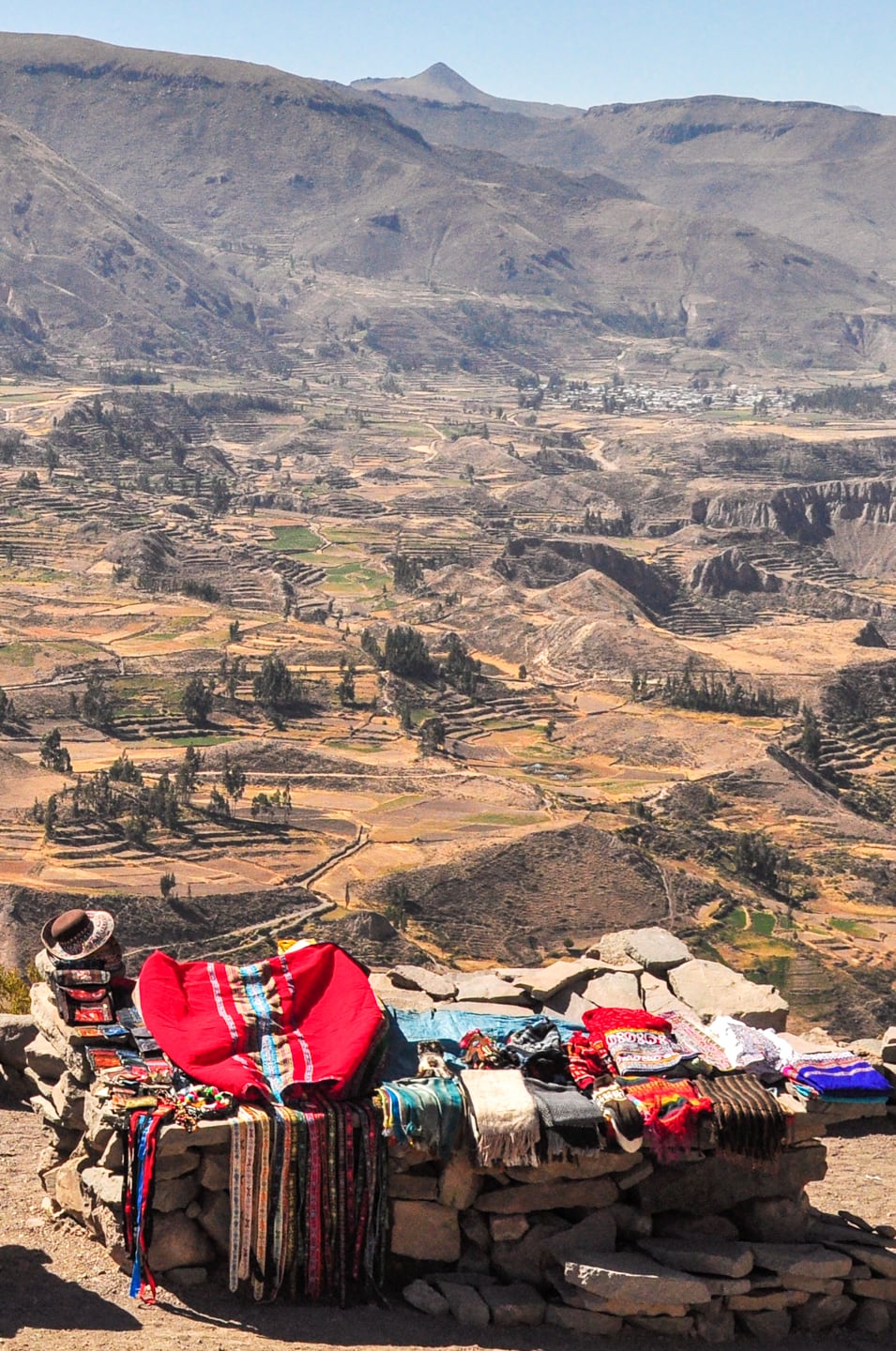 Souvenirs laid out for tourists against the breathtaking backdrop of “Cruz del Condor.” 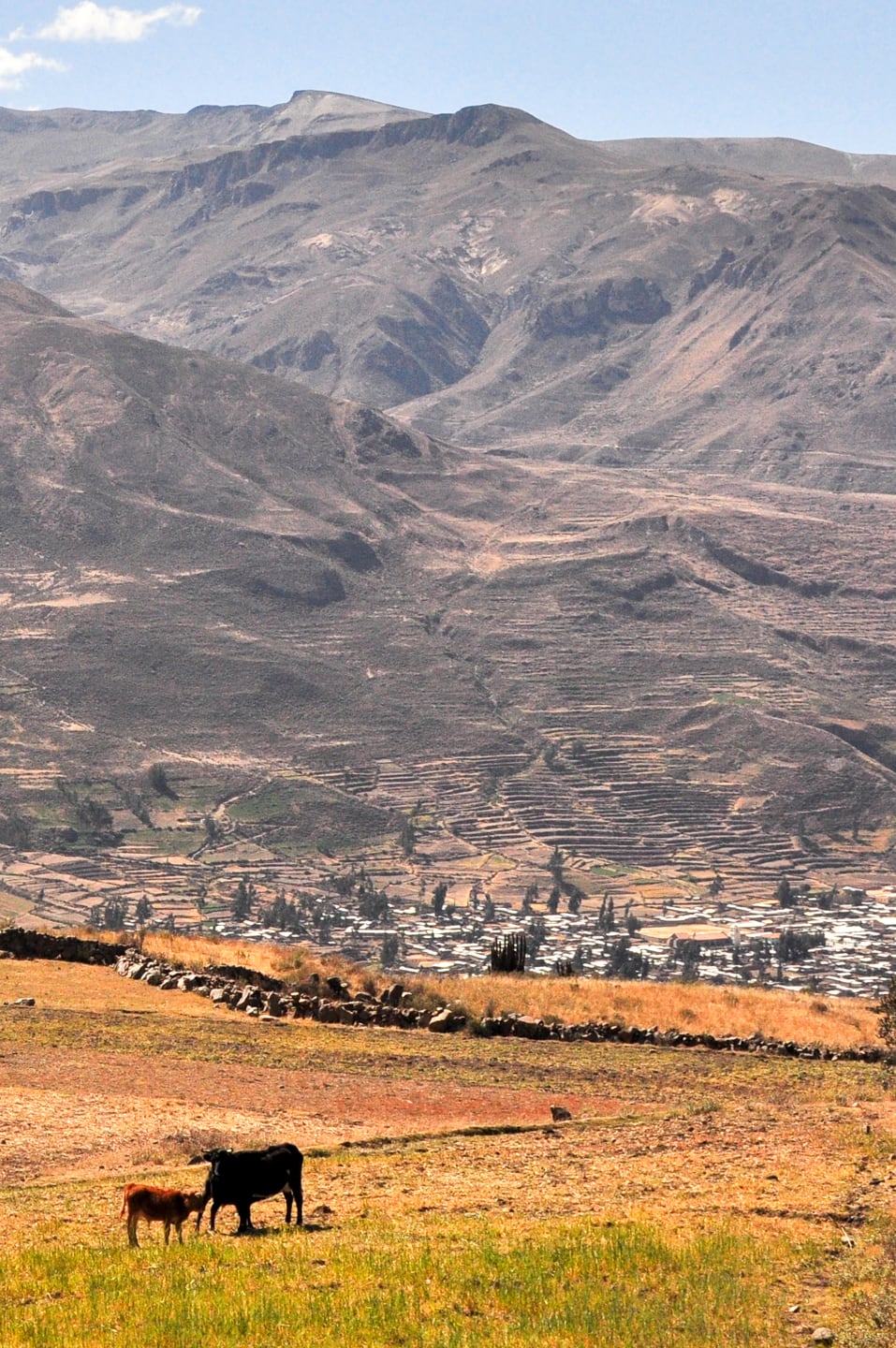 The canyon was on the right-side of the bus where I sat, and at times I would stick my head out of the window only to see a 5,000+ ft. sheer drop below us. Every curve was essentially a ¨dead man´s curve,¨ adorned with shrines in memory of less fortunate travelers who had once passed this same way. 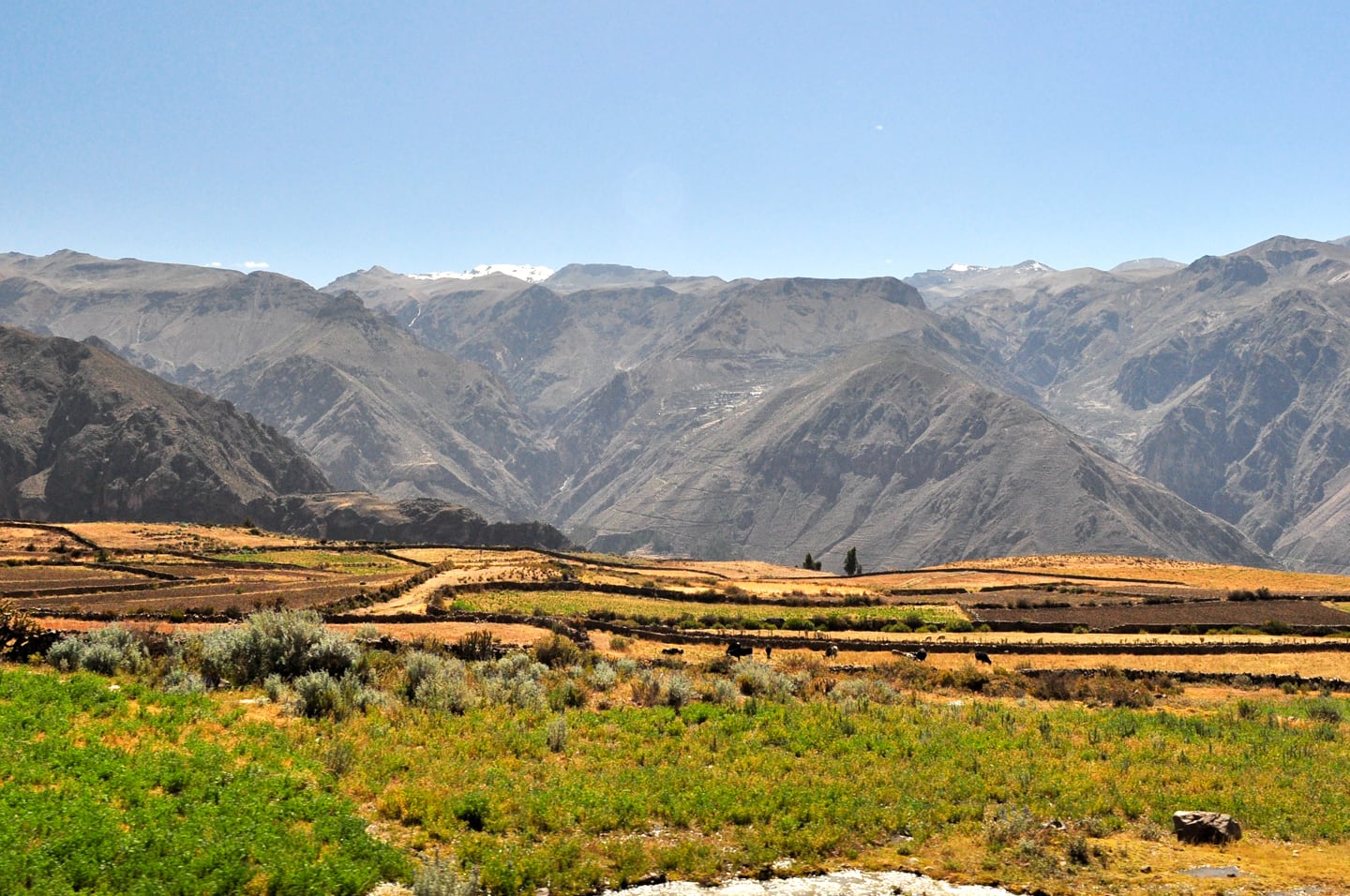 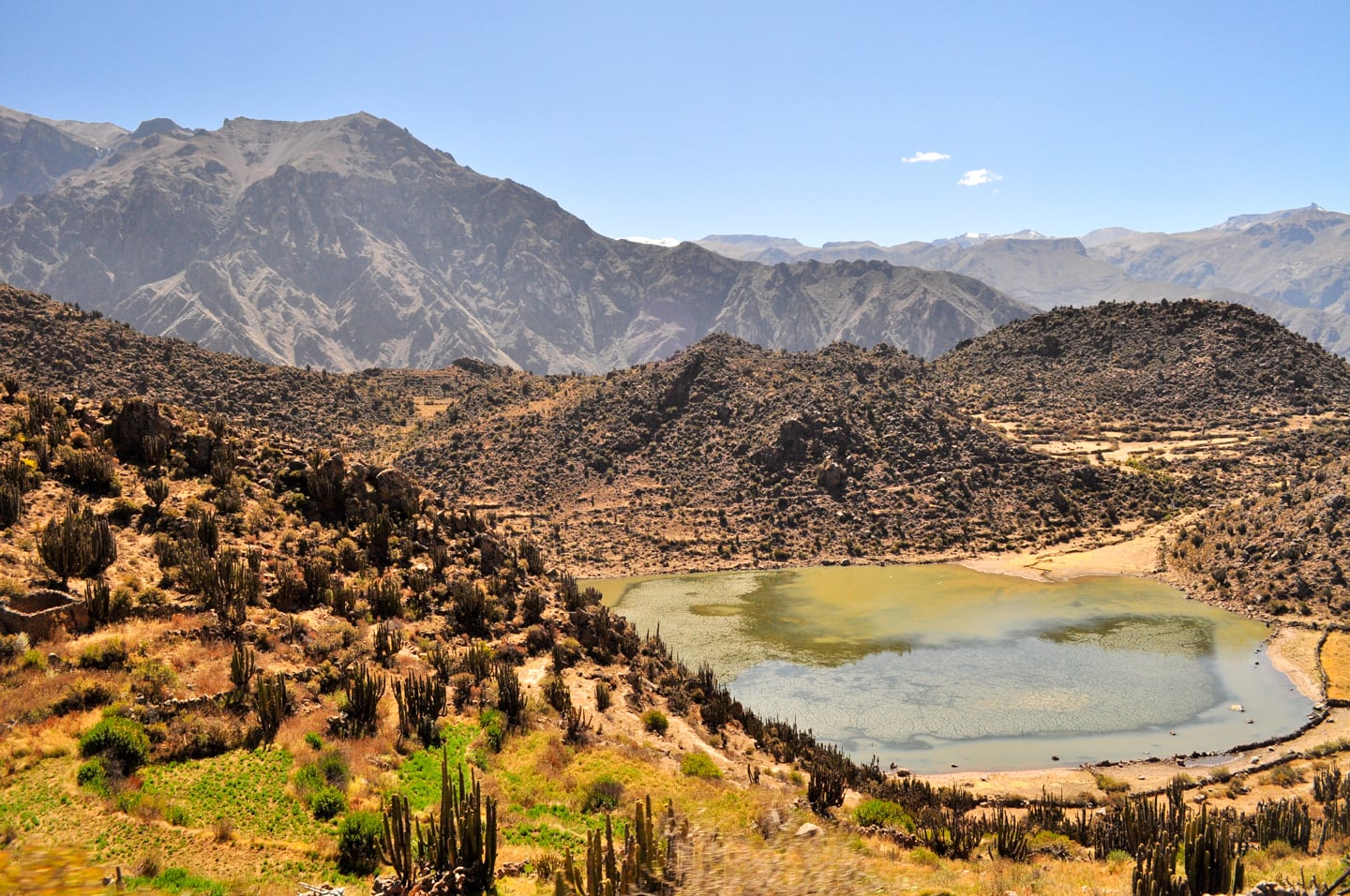 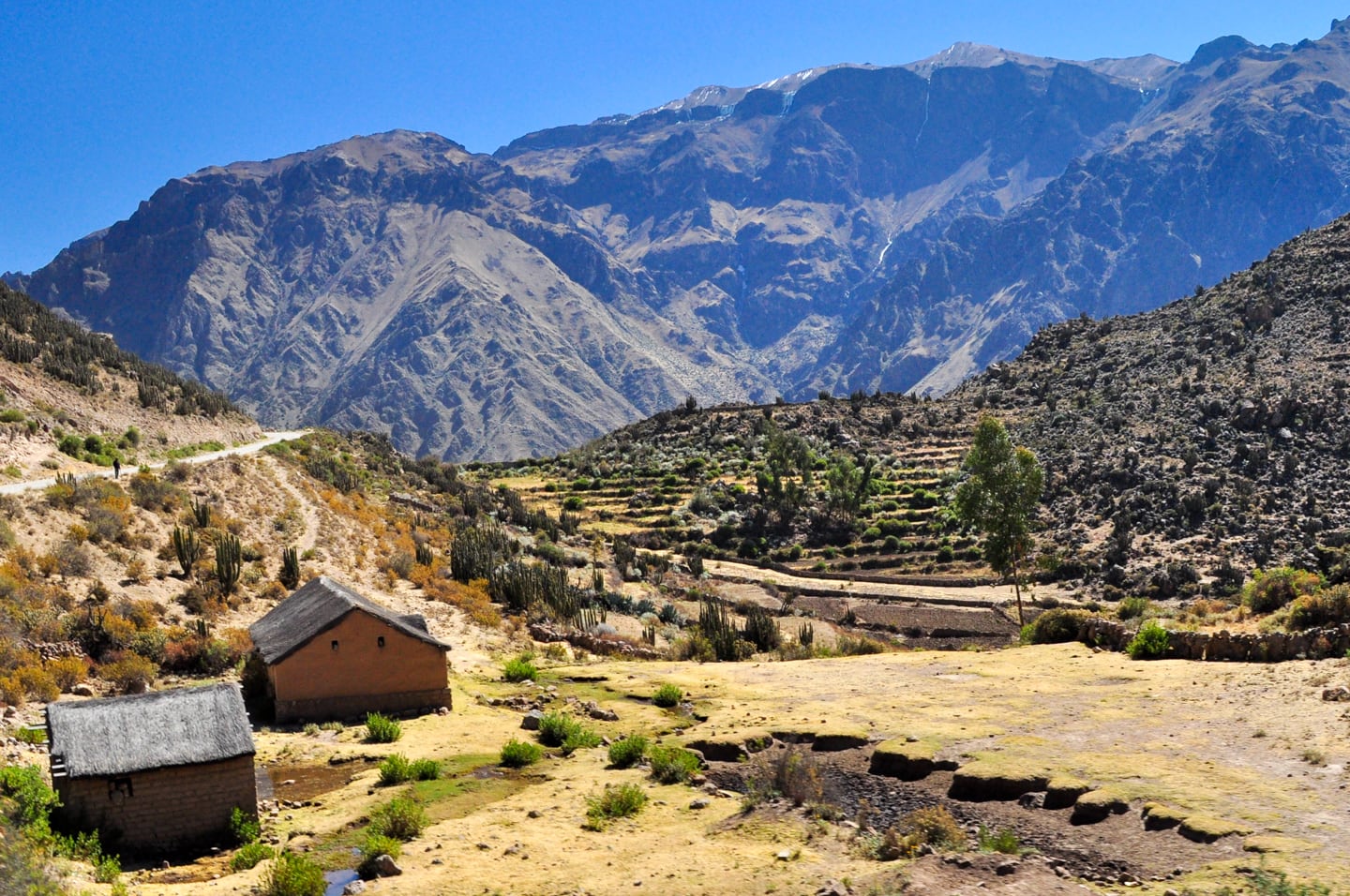 It was great fun riding with the locals as locals do, and in retrospect I can certainly say it was a most enjoyable adventure (knowing now that I lived through it).

After a looooooong six hours we made it to dusty Cabanaconde (about 11,000 feet), the small village where the Colca Canyon hike began. 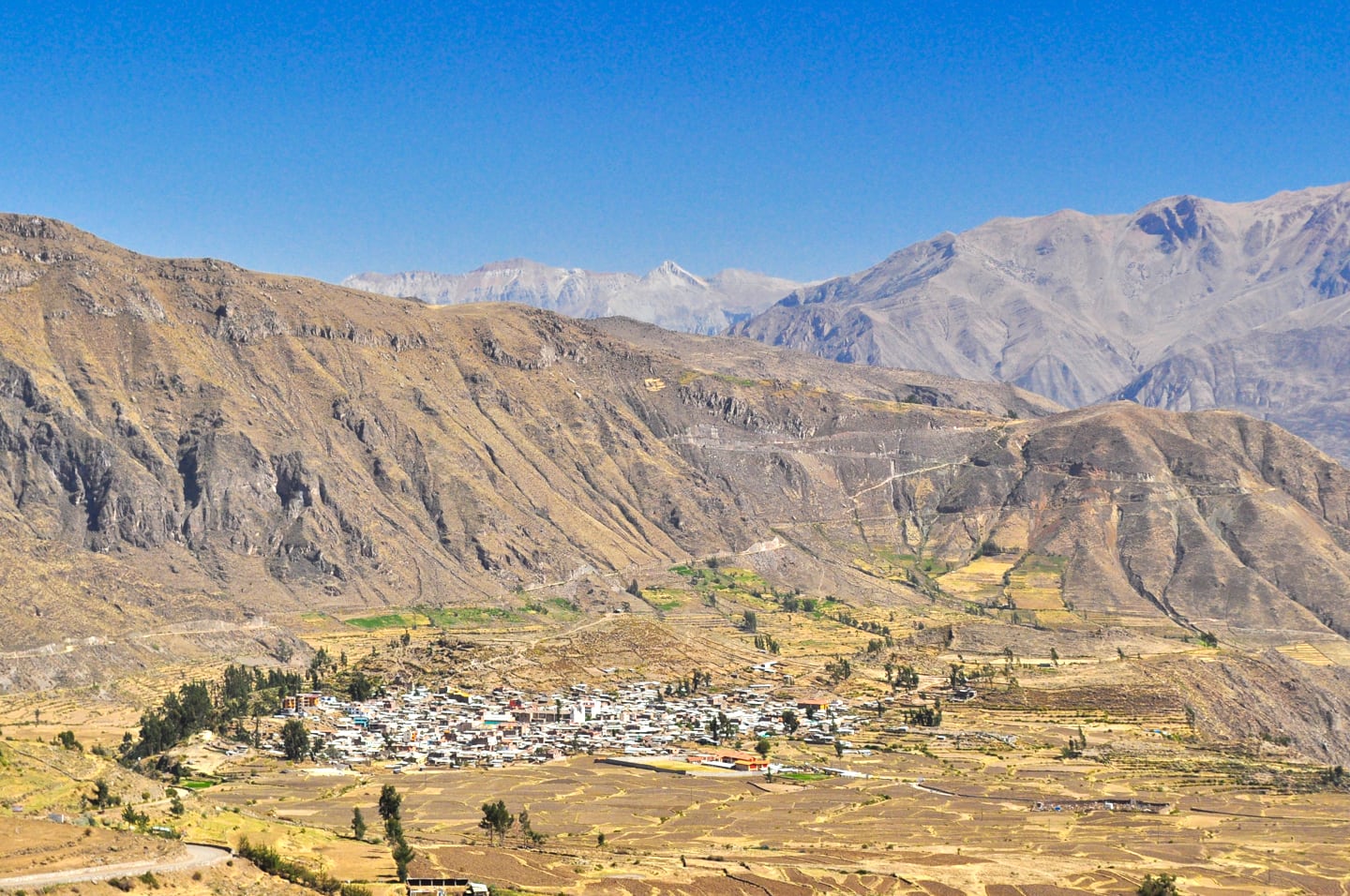 Beginning our descent by bus into Cabanaconde for the Colca Canyon hike. 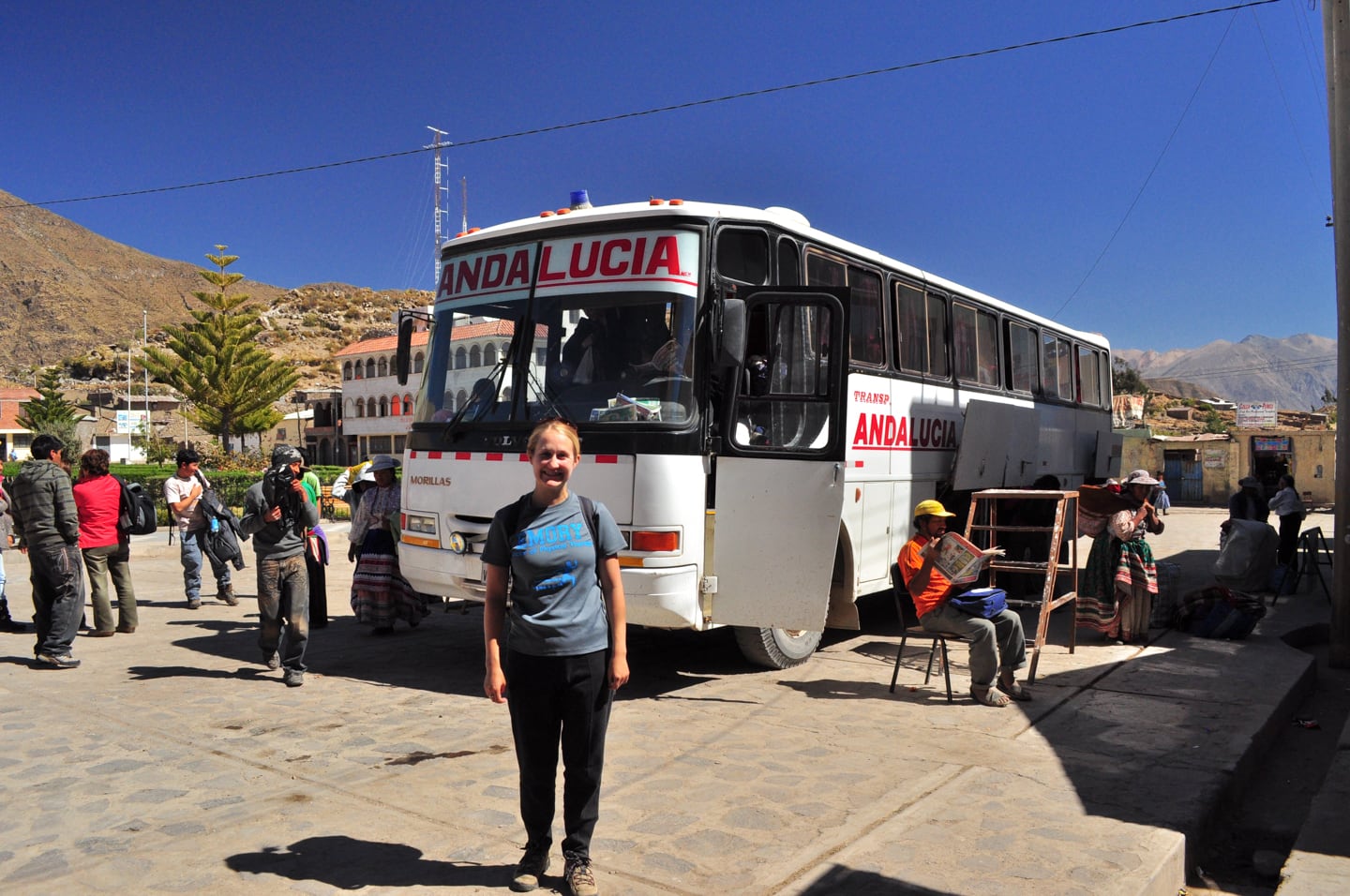 Lori, standing proudly in front of the Andalucia bus (which incidentally looks much nicer in the photo) and all of the subsequent business spawned by its twice-daily arrival.

We decided to refuel at a small hostel; Lori enjoyed lomo saltado con arroz (like carne asada, but on rice, not a tortilla) with mate de coca (tea with coca leaves…good for altitude sickness, so they say). 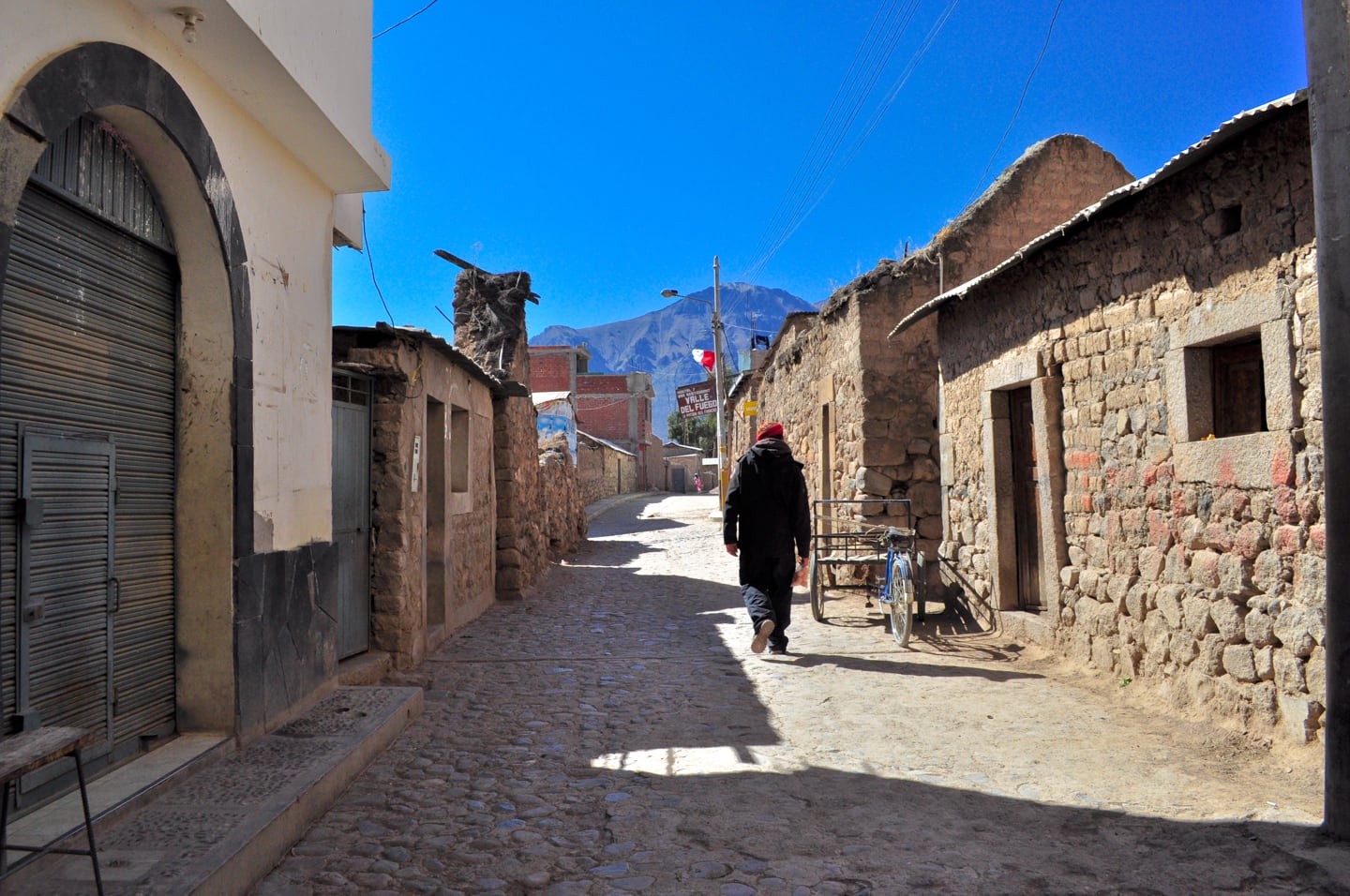 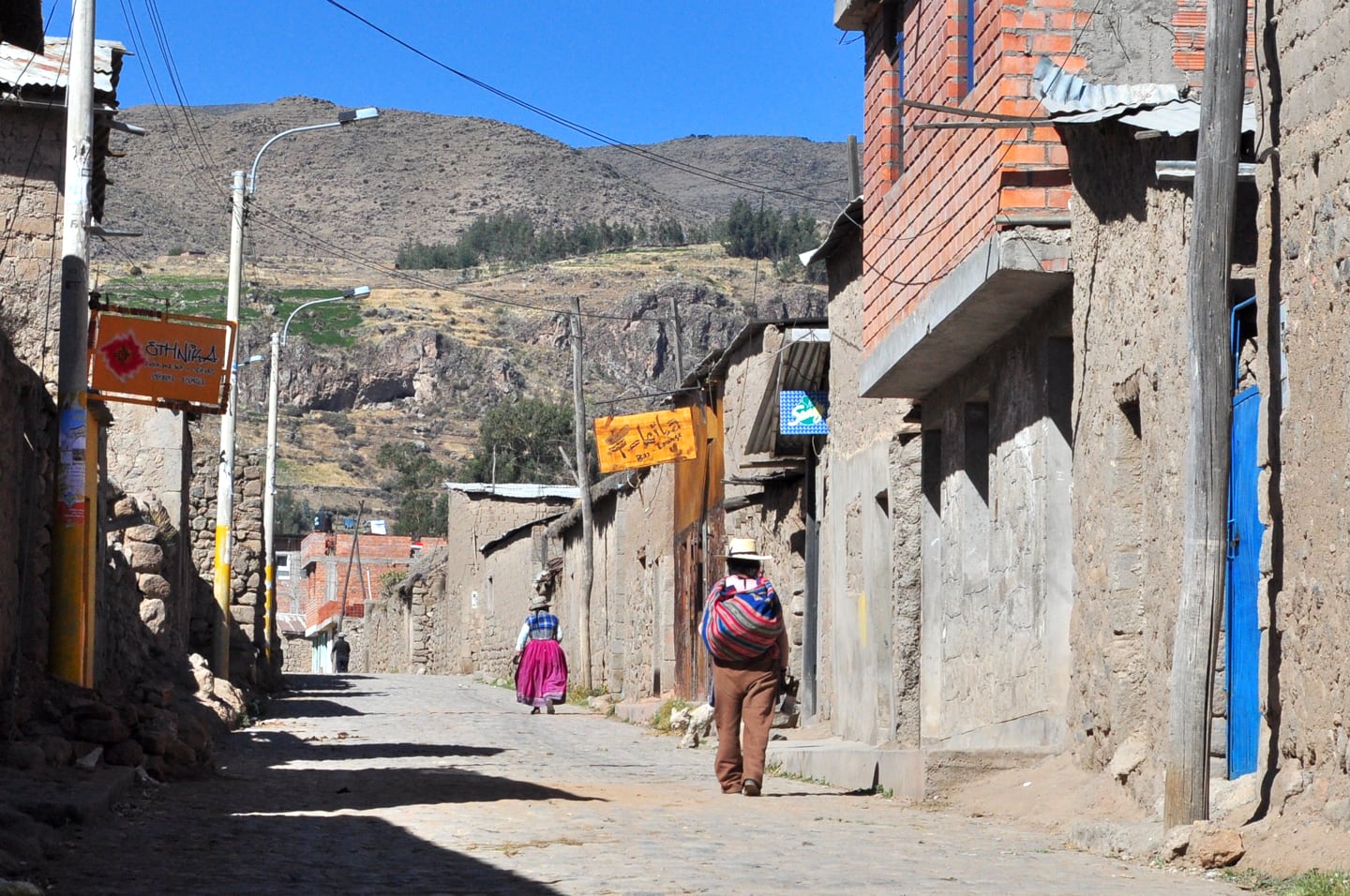 We both felt full, but good, and decided to head down the trail after some helpful advice from a French guy at Hostal Valle del Fuego.

It took us about 2.5 hours to make the steep, rocky descent to Sangalle (el Oasis) at the bottom of the world’s second deepest canyon). 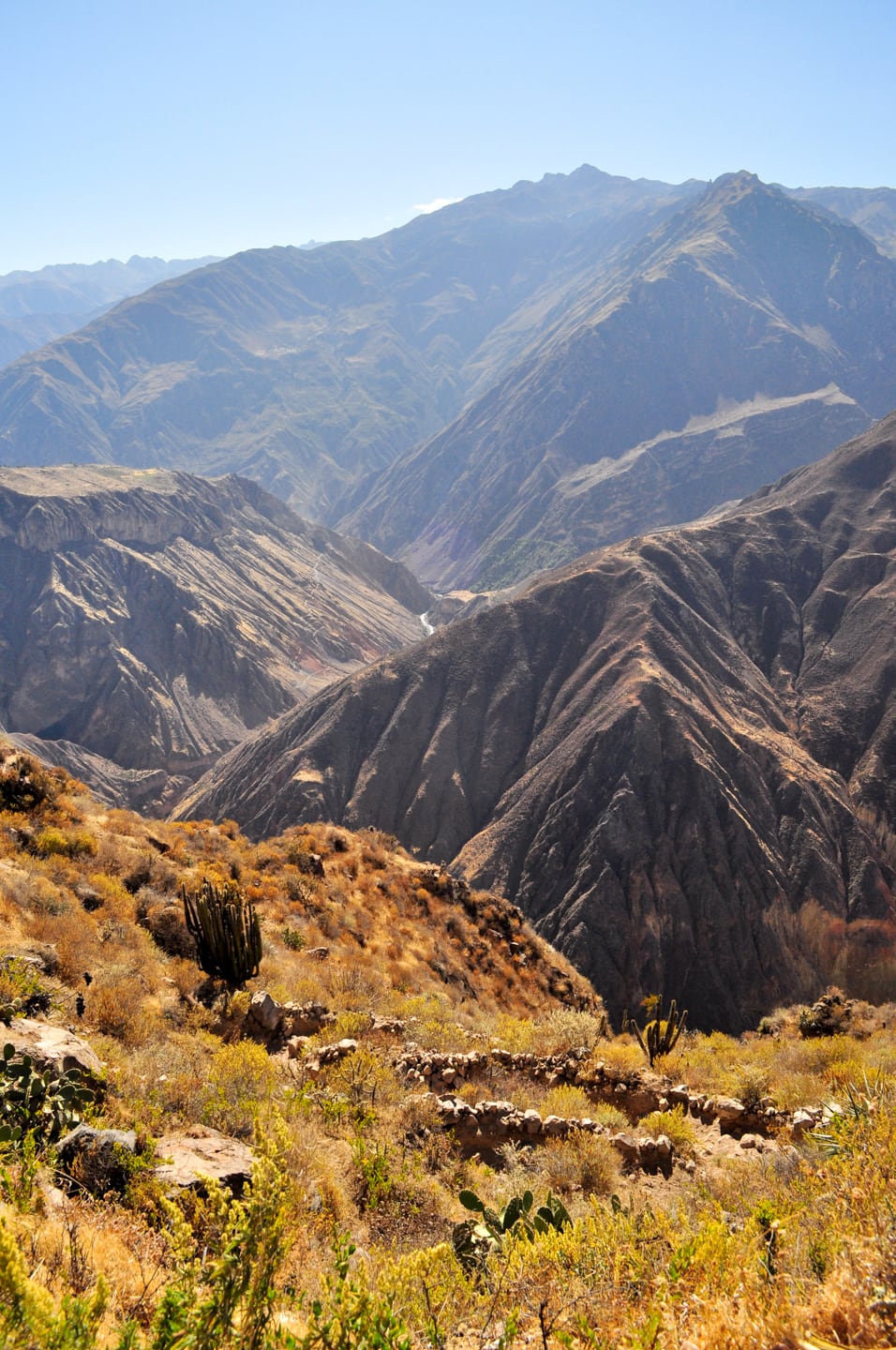 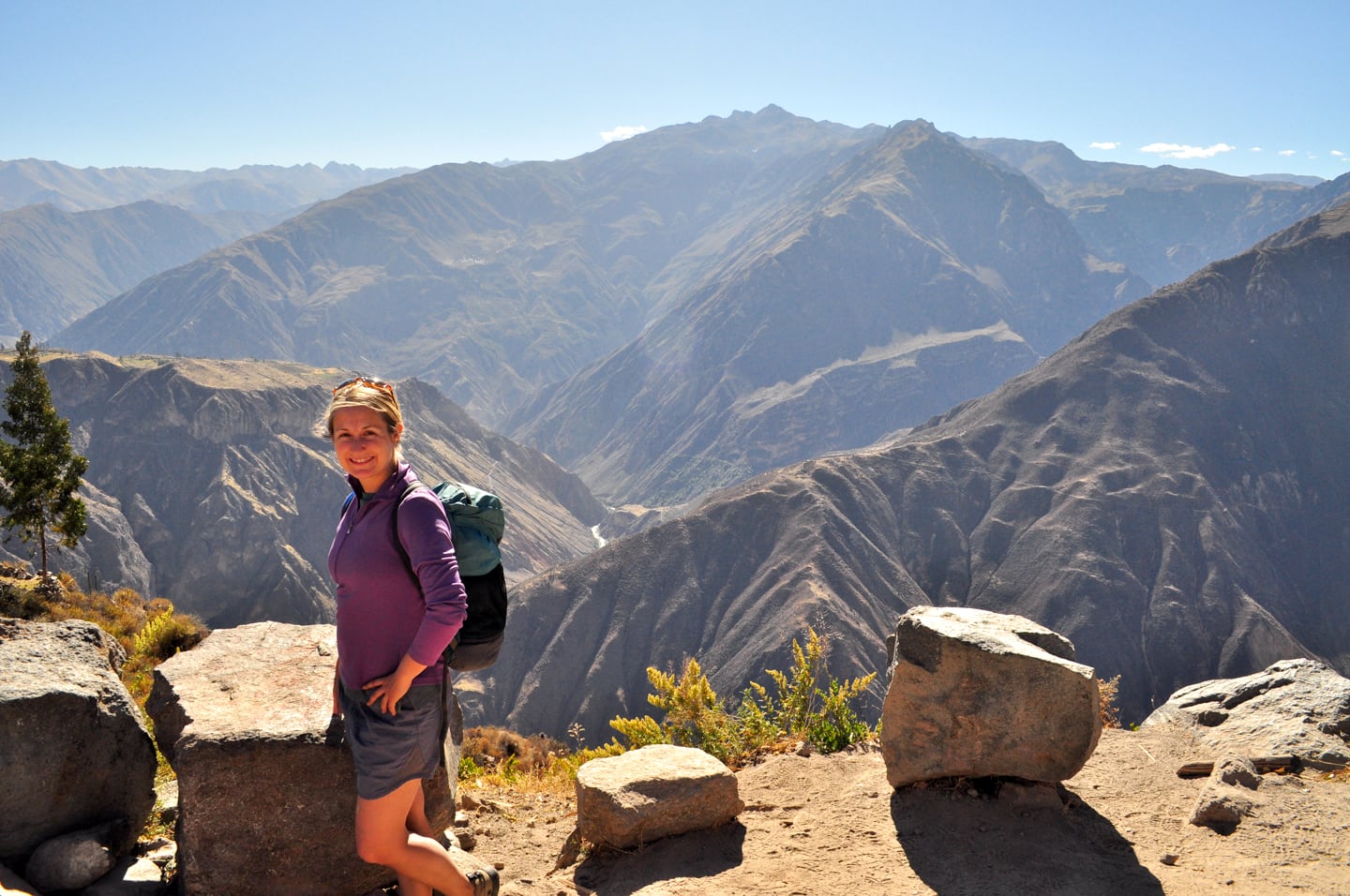 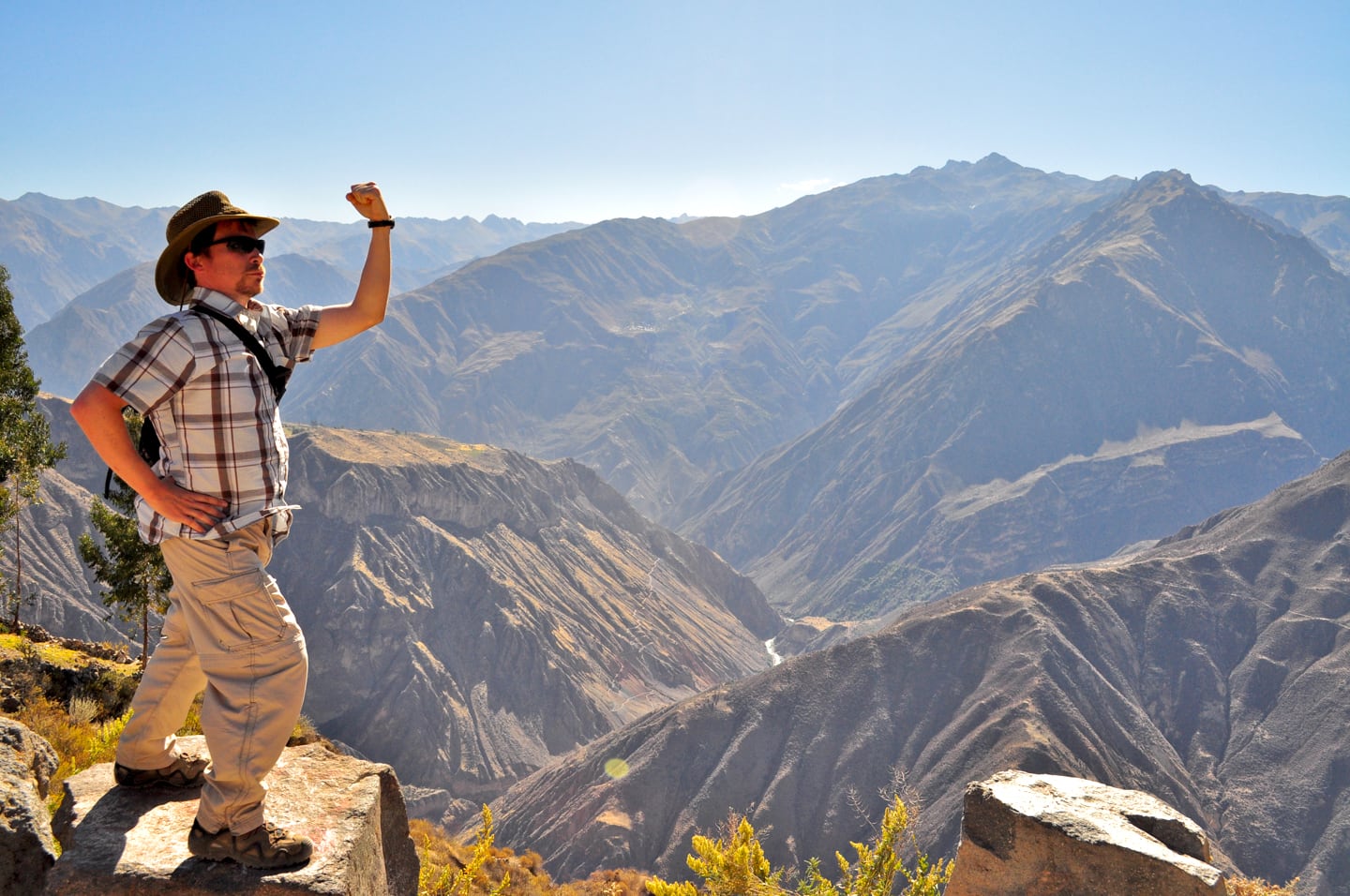 Although not aerobically demanding, the hike down hurt our toes and quads a bit. The views were awesome and we stopped to see the many trails and villages clinging to the canyon’s walls. 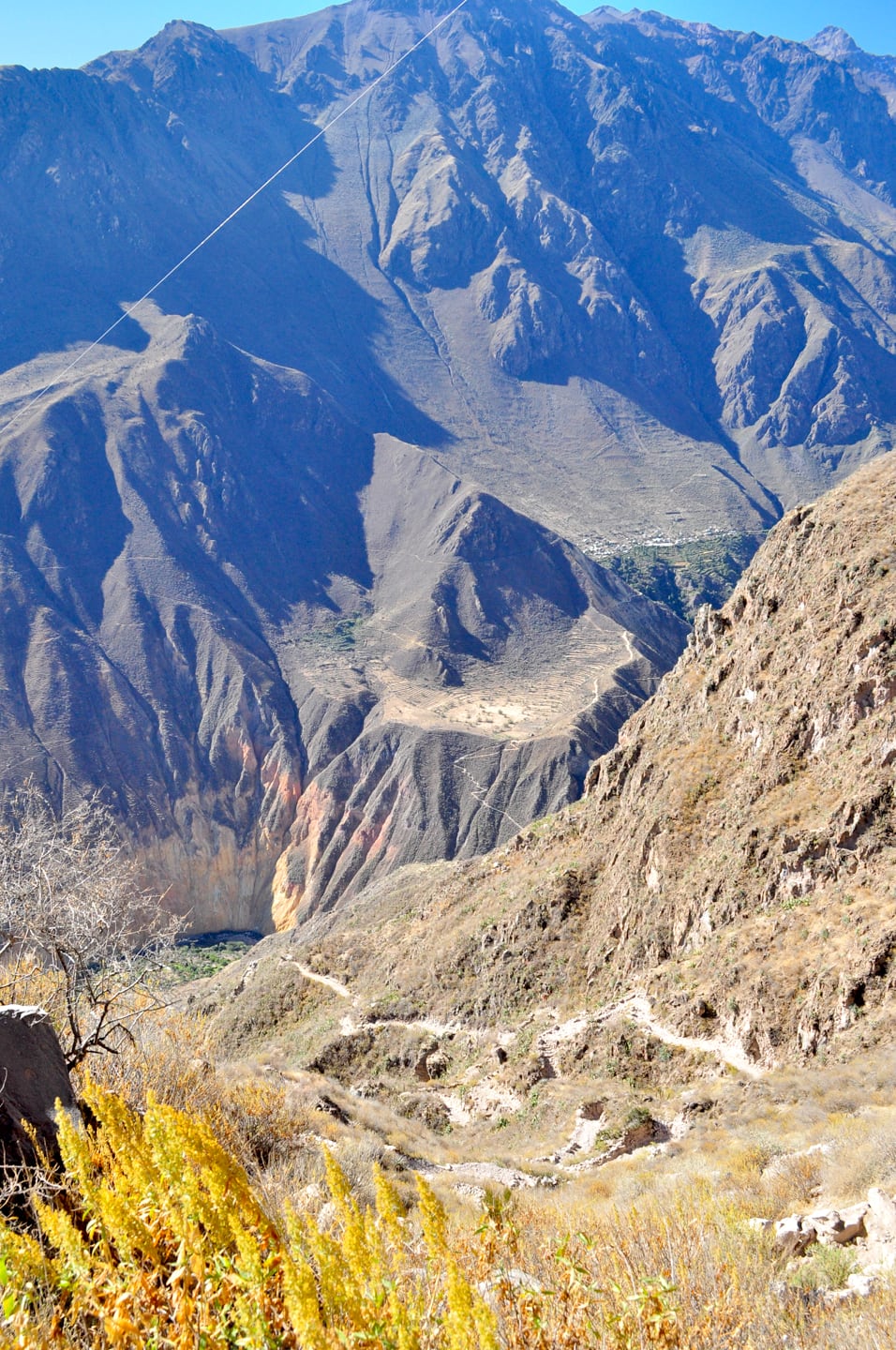 By the time we made it to the bottom the sun was no longer shining at the Oasis (one of the hostal areas at the bottom with bungalows and pools) due to the steepness of the canyon walls, even though it was only 4:30.

Lori was a bit bummed because the whole way she was looking forward to cooling off in the pools and drying off in the sun…but I still convinced her to take a chilly dip in the solar-heated pool with two waterfalls, which felt amazing after the hot and dusty hike.

The accommodations were great – a little round, dirt-floor hut made out of reeds. Only 10 soles (a little over $3 USD) per person. A dinner of vegetable soup (they are really big on soups in Peru), rice, lentils, and more mate de coca was only 10 soles as well! 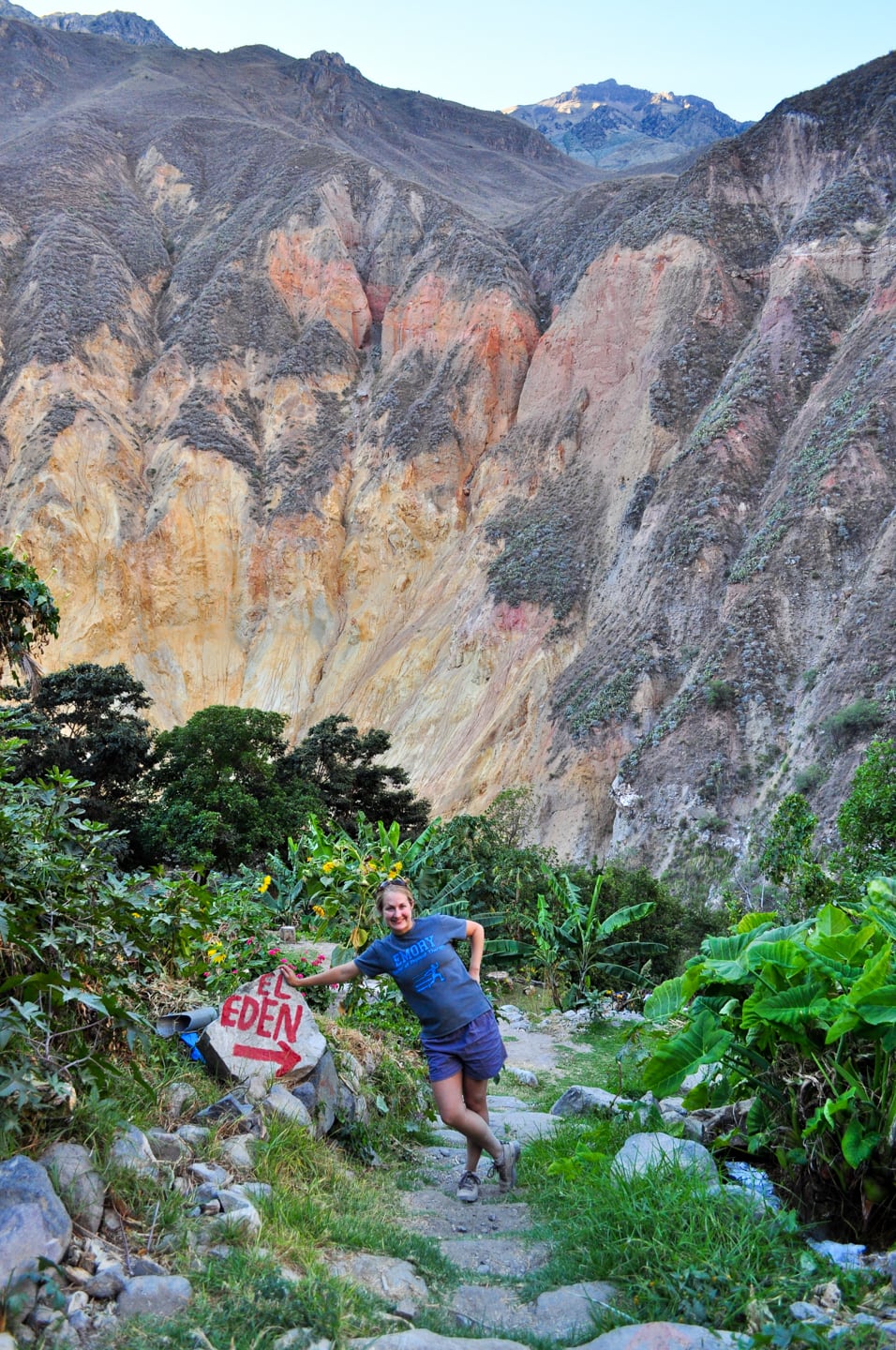 We met two brothers from Utah and celebrated 4th of July under the Southern Cross (constellation only visible in the southern hemisphere). Lori and I shared some Peruvian beer, Arequipeña, to mark the occasion. While there were no fireworks, there was a shooting star and lots of other very, very bright stars. 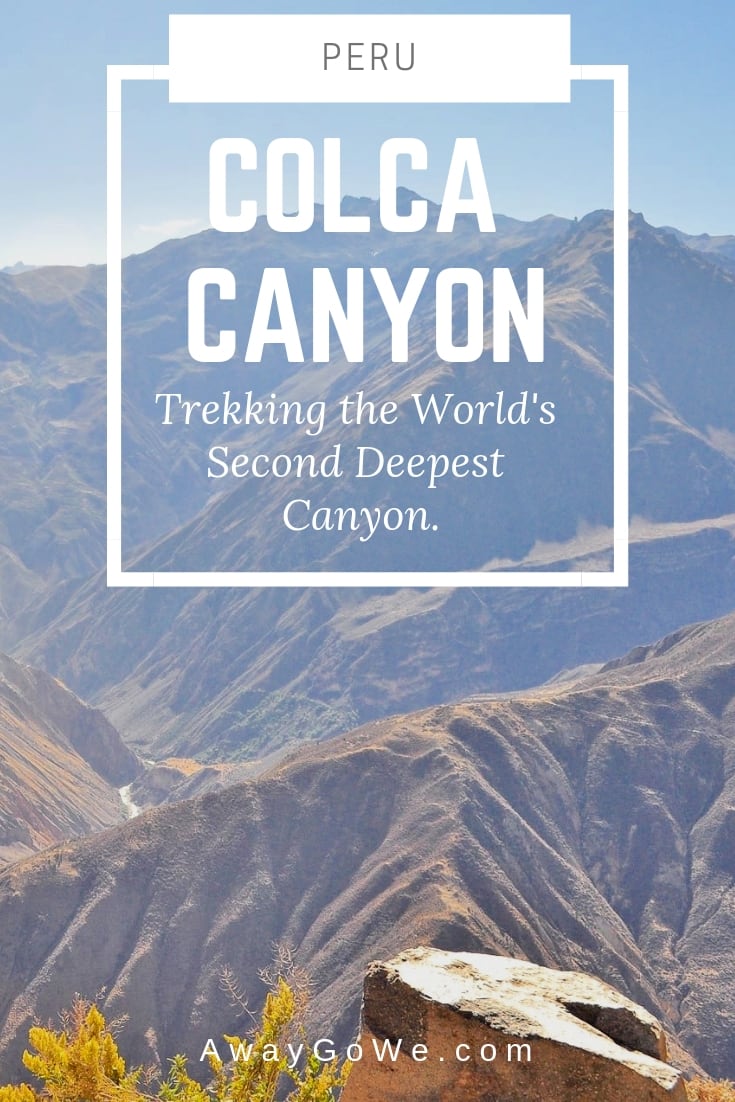