Visiting Taquile Island (Isla Taquile) is a unique experience you won’t soon forget! Here’s what to expect plus tips for your overnight stay.

After spending a memorable night on Amantani Island with a local family, we caught a mid-morning ferry to nearby Taquile Island (Isla Taquile), home to proud and friendly locals, crazy beautiful sunsets, and some of the most famous handwoven textiles on earth!

The islands of Lake Titicaca offer a unique travel experience you won’t find anywhere else in the world. If you’re thinking about visiting Taquile Island on your own, there are a few things you’ll need to know first. Travelers planning to stay overnight on the island will find this guide particularly useful. 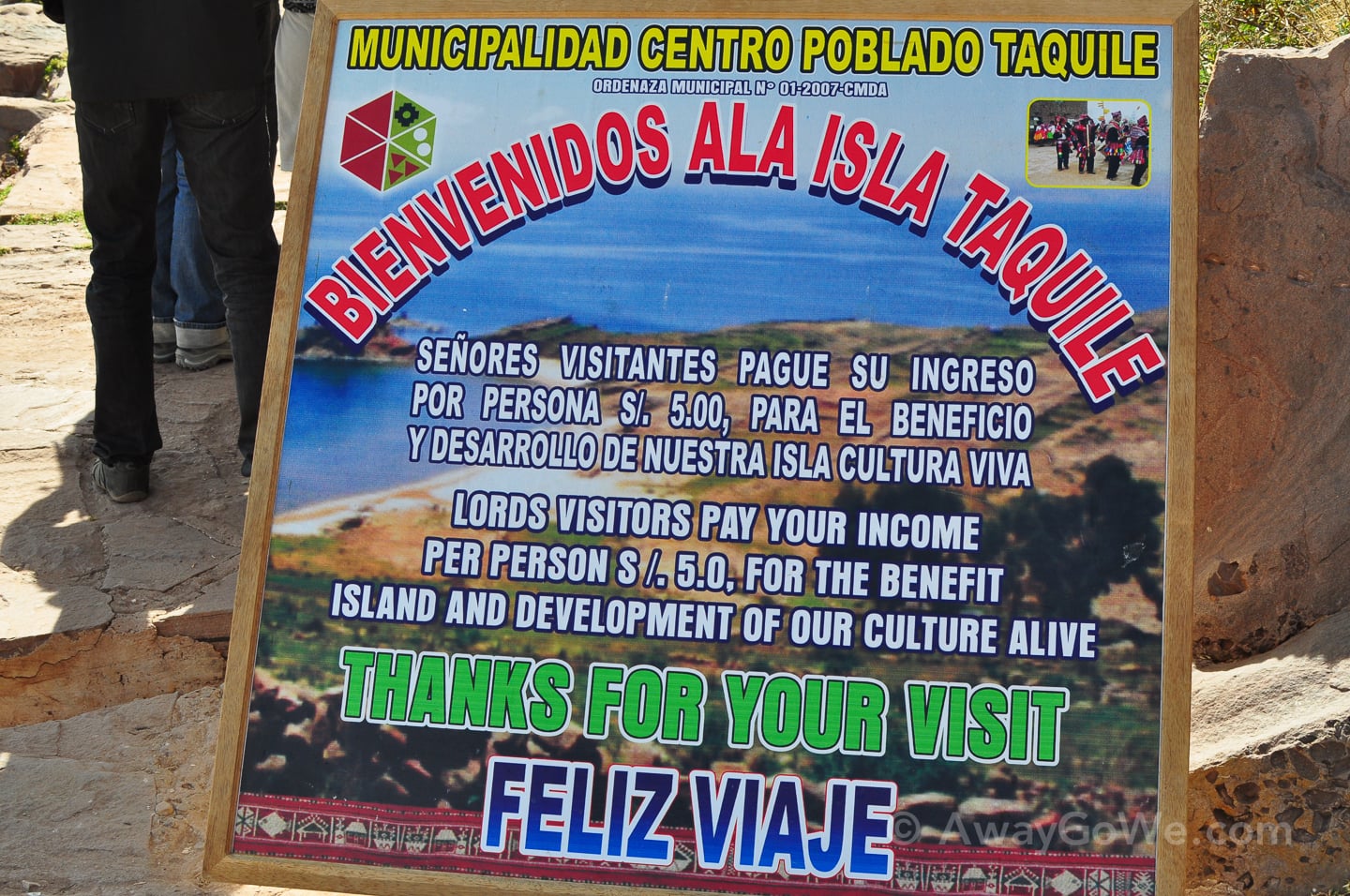 Isla Taquile has a unique collectivist culture, and the communal restaurants, homestays and craft shops are a reflection of this. Residents run their society on the Inca moral code of “do not steal, do not lie, do not be lazy.”

The community’s collectivism has ancient roots, but has experienced a renaissance in recent years.

Beginning in the 1970s, tourism came to Taquile in earnest, and Taquileños slowly began losing control over the mass day-tourism operated by non-locals.

In response to their island being over-run by outside interests, the residents banded together and created an innovative, community-controlled sustainable tourism model, which allowed the Taquileños to re-assert control over the island and their future.

Today, Taquileños direct the tourism activities on the island and every community member directly benefits from the 40,000 tourists who visit Taquile each year.

Thankfully, most of those 40,000 visitors are day-trippers to the island, and a great majority stick close to the main plaza. Just beyond the village, we felt like we were the only foreigners on the island.

Local literature for Taquile also proclaims: “No perros, policias, coches” (No dogs, police or cars) — in that order — will be found on this island.

How to Get to Taquile Island

Transport to/from Puno and among the islands is about as straight forward as it gets.

There is a boat collective that offers direct return ticket to the island valid for 15 days, as well as a sort of hop-on hop-off/ joint ticket service called a “multiple way” ticket for visiting Uros, Amantani, and Taquile.

If you’re headed direct to Taquile from Puno, head down to the port in Puno [map] and look for the “Taquile” sign board. A return journey to Isla Taquile should cost around 25s, depart around 7:45am, and take about 4 hours (including a 45-minute stop at the Uros floating reed islands).

If you decide to stay overnight on Amantani first (which is what we did), look for the “Amantani” sign board at the port and get a “multiple way” Puno-Uros-Amantani-Taquile-Puno ticket (30s). These boats depart Puno daily at 8:20am and also take around 4 hours (again, including a 45-minute stop on the Uros islands).

When you are ready to leave Amantani for Taquile, boats leave Amantani at 8am and arrive at 9am (1 hour). When you’re ready to head back to Puno, boats typically depart Taquile around noon, arriving in Puno around 3pm (3 hrs.).

Of course, this is all subject to change without warning (as we experienced first hand!) due to weather conditions or periodic schedule changes. Once you arrive in Puno, you can easily confirm all these details at your guesthouse or the port ticket office.

We had a short, yet surprisingly rough crossing from Amantani, which had implications for us later in the day — you’d never know it on the island, since the weather was warm, sunny and all around ideal.

Taquile’s a bit more DIY than Amantani. The ferry tied up and we were let off, left to find the village and figure out accommodation on our own.

Fortunately, we weren’t confronted with a lot of choices at the harbor — there’s one path, presumably leading towards the center of the village. 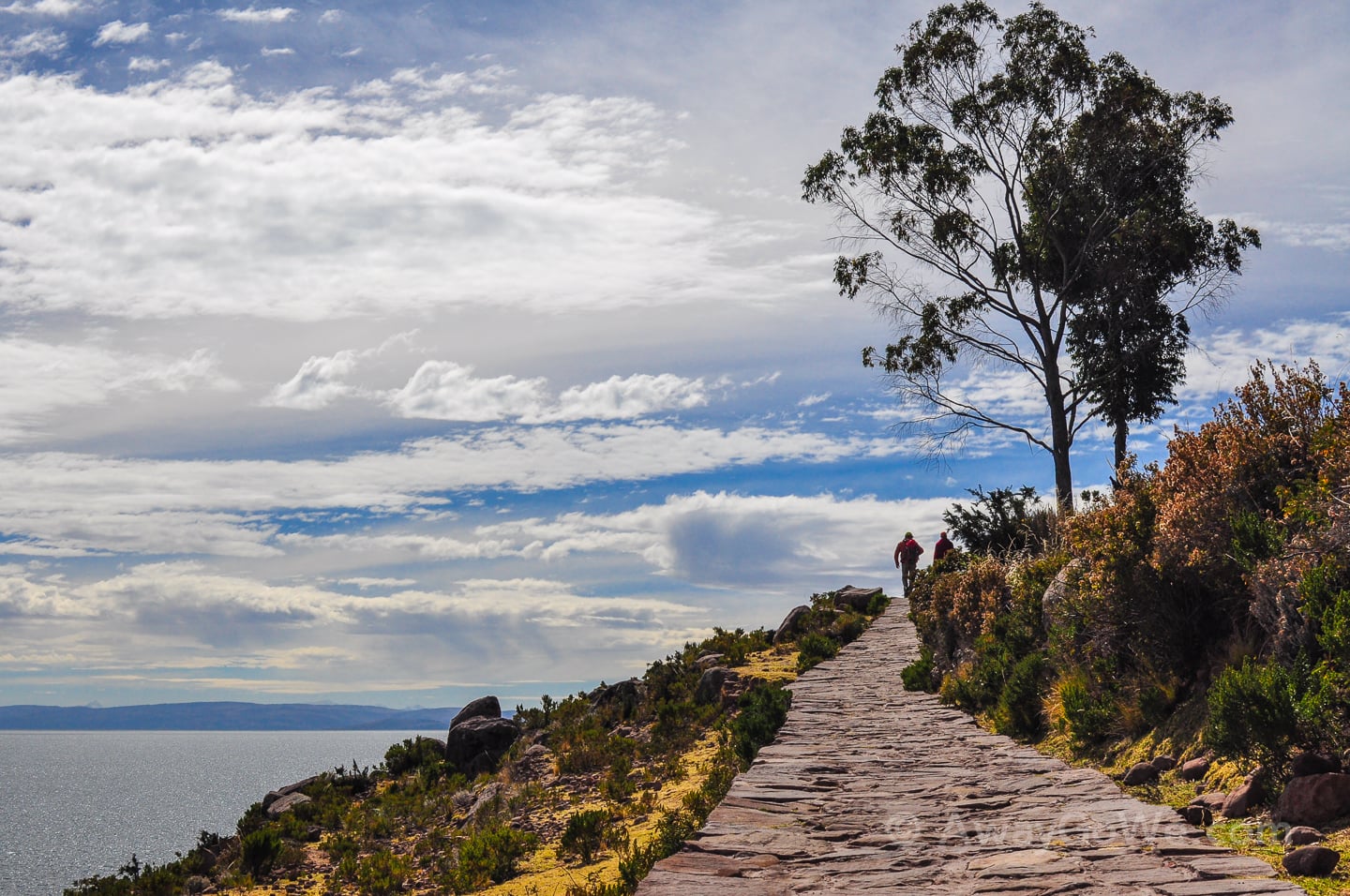 Despite Isla Taquile’s population eclipsing Amantani’s (2,200 vs. 800), we still found the island to be peaceful and bucolic.

Because we were coming from Amantani to the north, our ferry dropped us on the far north end of the elongated island, leaving us with a two mile (3.2 km) walk with our packs along a stone path. 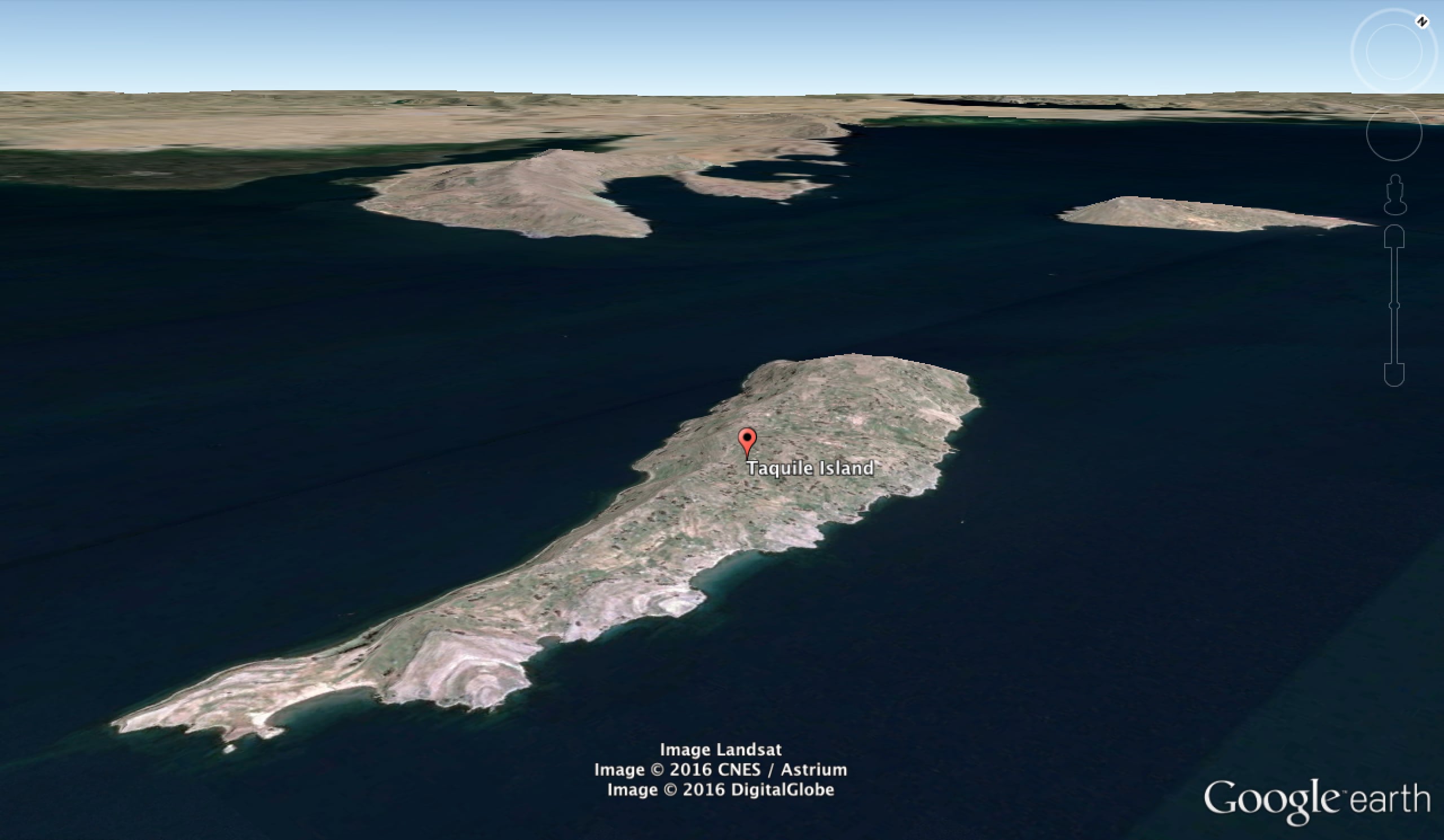 Overall, the island is about three miles long, but fortunately for us, the village is midway down.

On our way, we passed several signs of the resourcefulness and ingenuity of the island’s residents. One of our our favorite things was the many gates with old sandal bottoms as hinges. 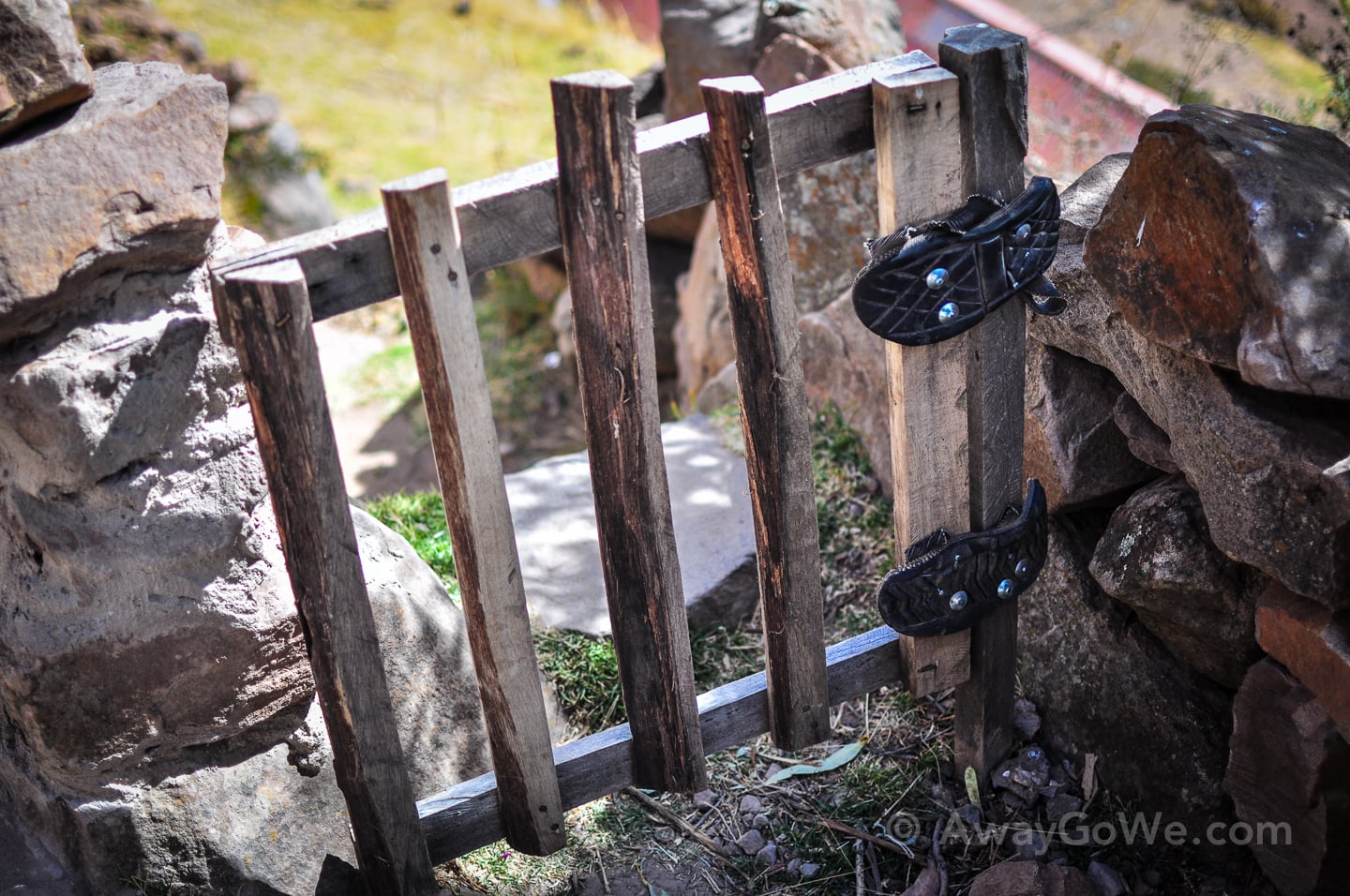 We also encountered livestock roaming the island freely. Here, lambs casually graze near the paths across the island. 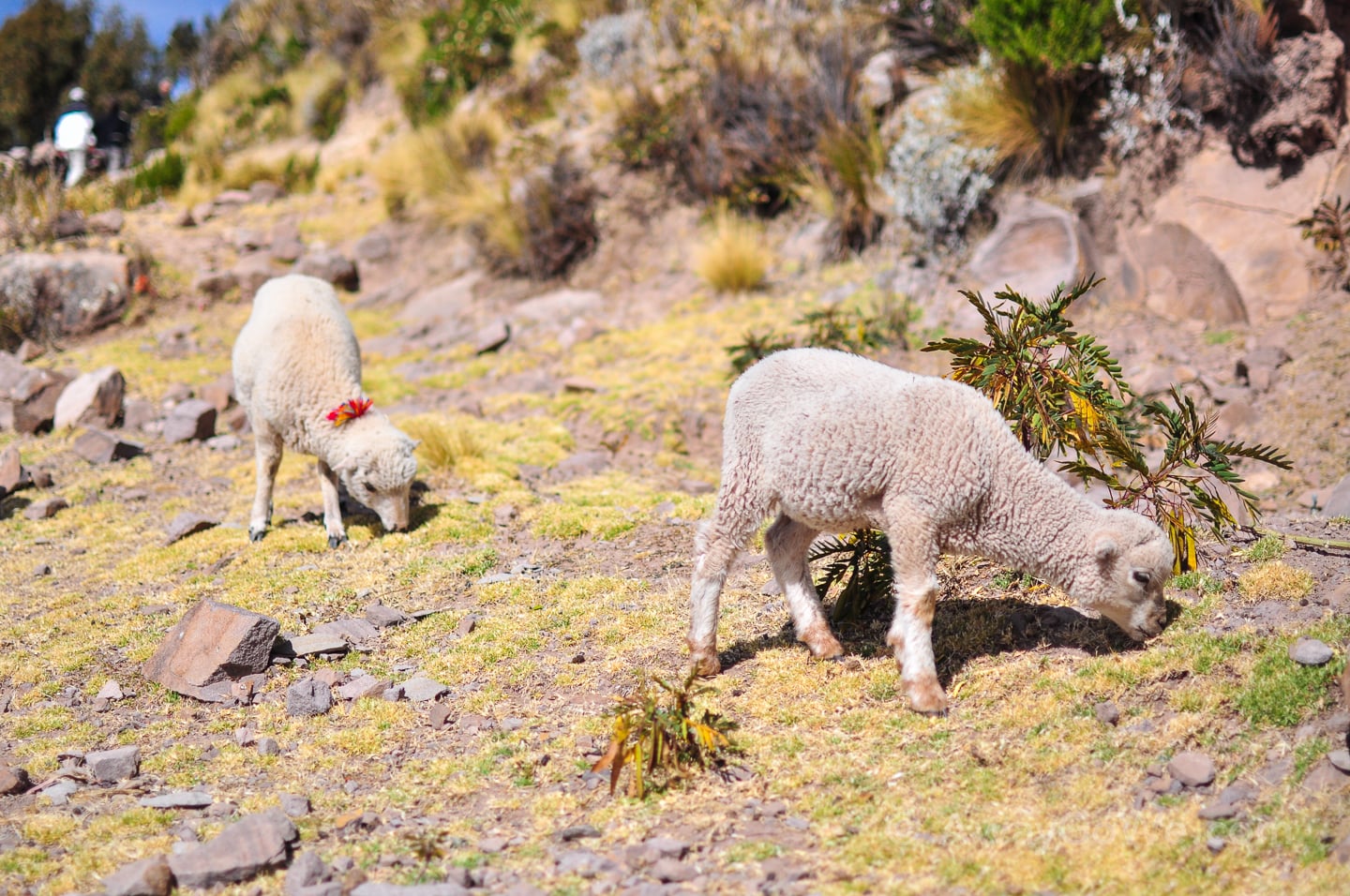 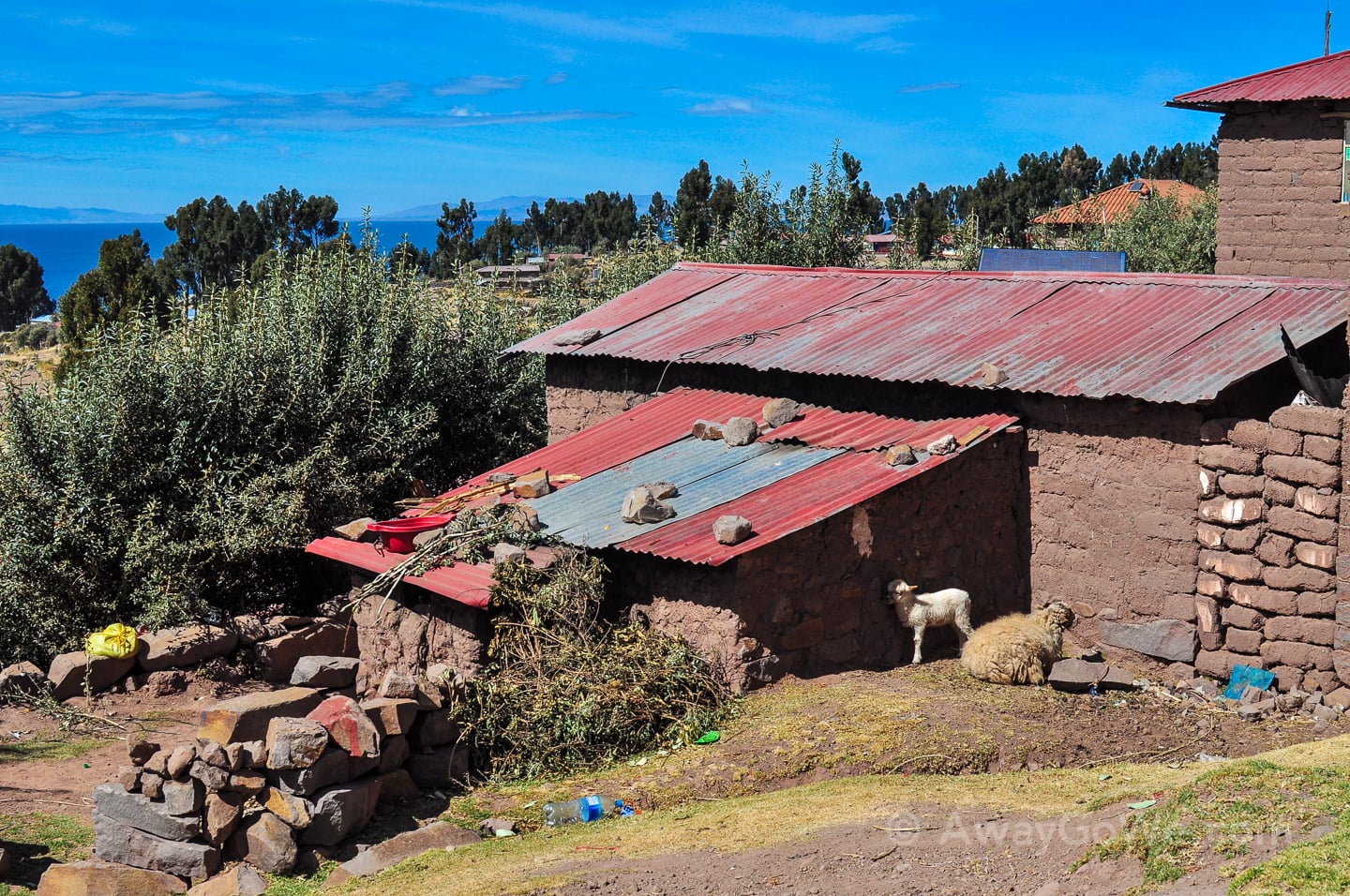 The stone paths provide ample opportunities to rest and take in lake views. 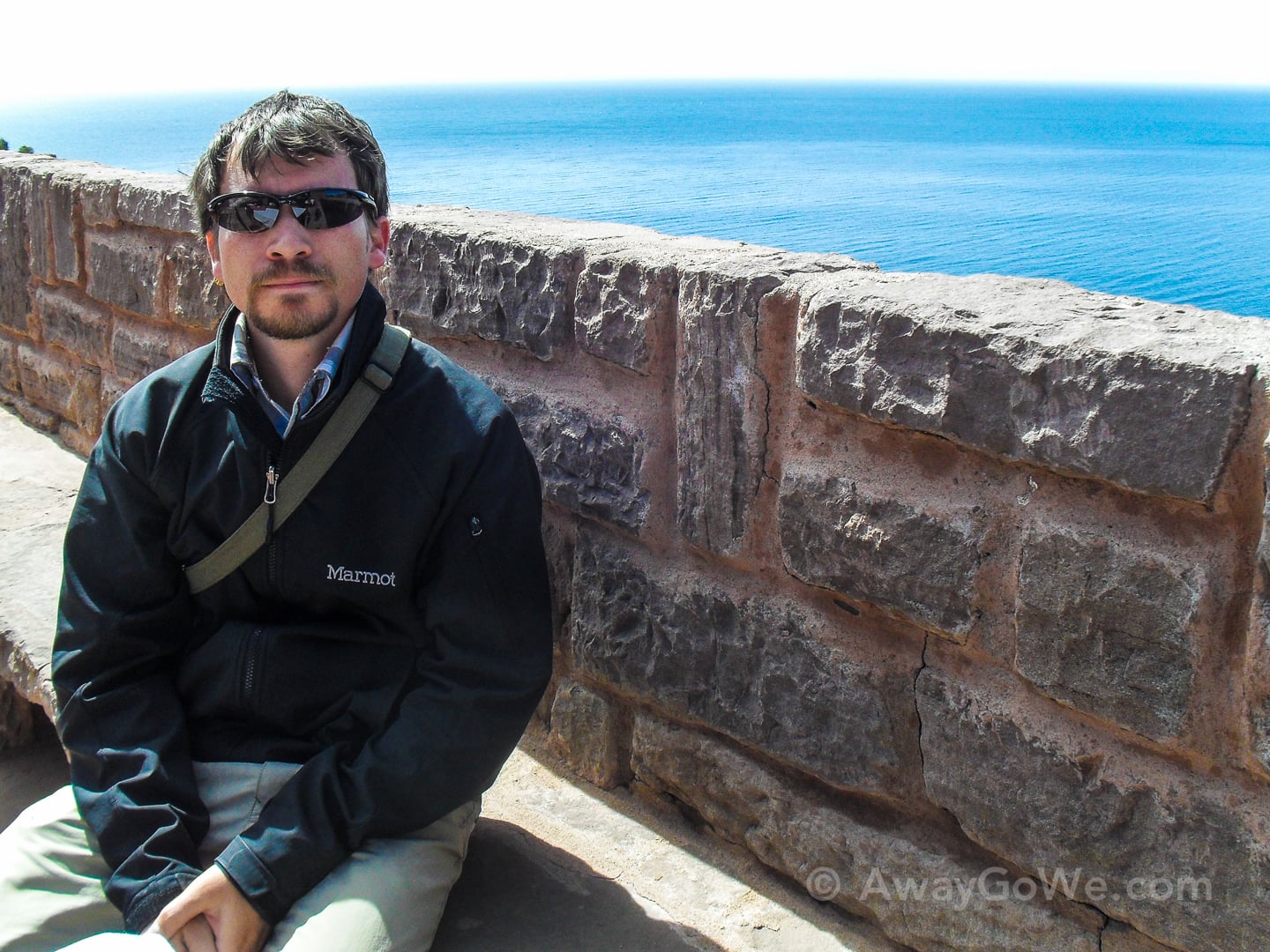 After walking from the harbor for a good long while, we finally reach the center of the village. 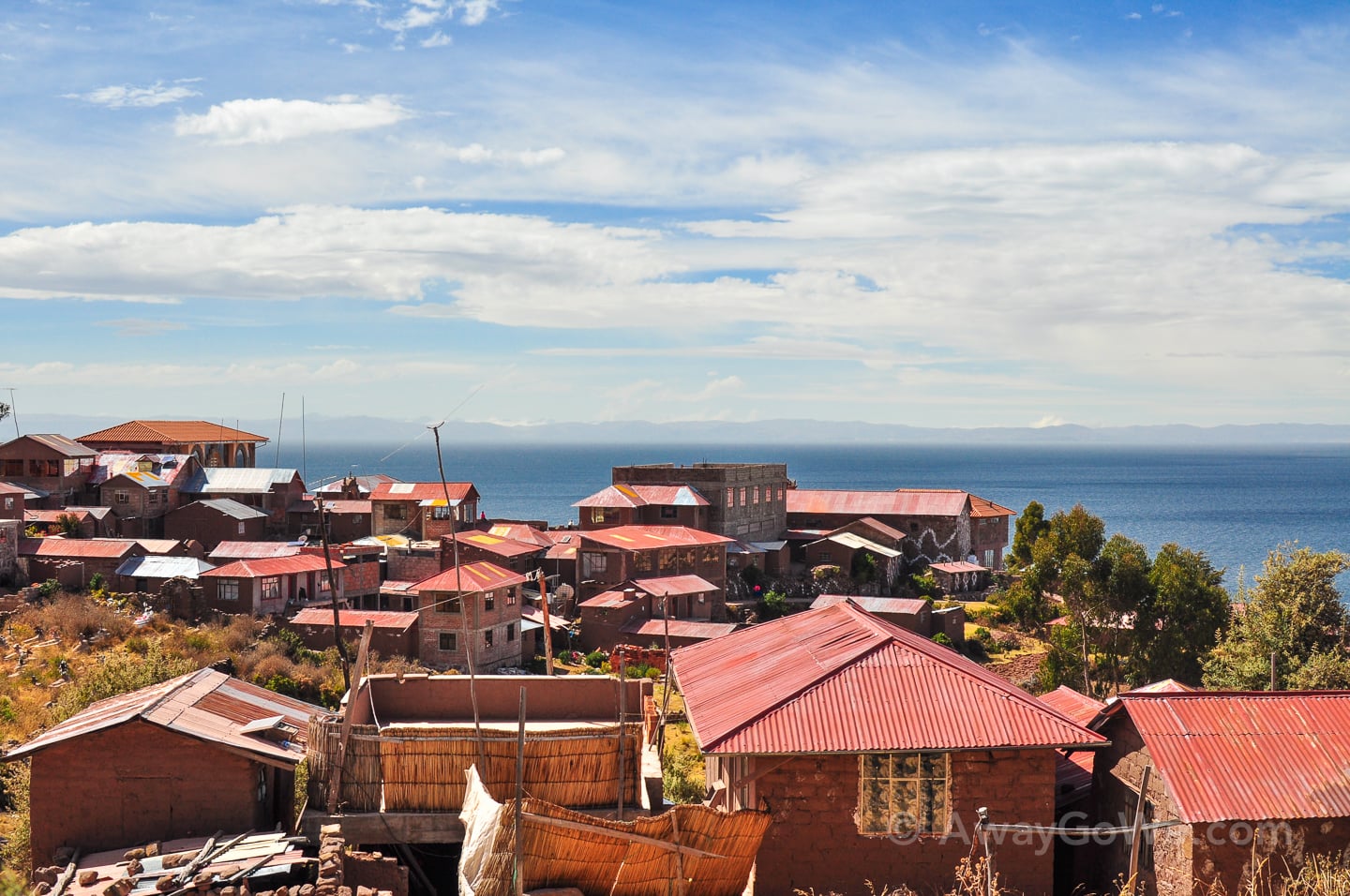 We’re hungry, and excited for something other than potatoes. Thankfully, compared to Amantani, Taquile Island is quite a bit more developed in terms of restaurants, guesthouses and other visitor services, particularly around the central plaza. 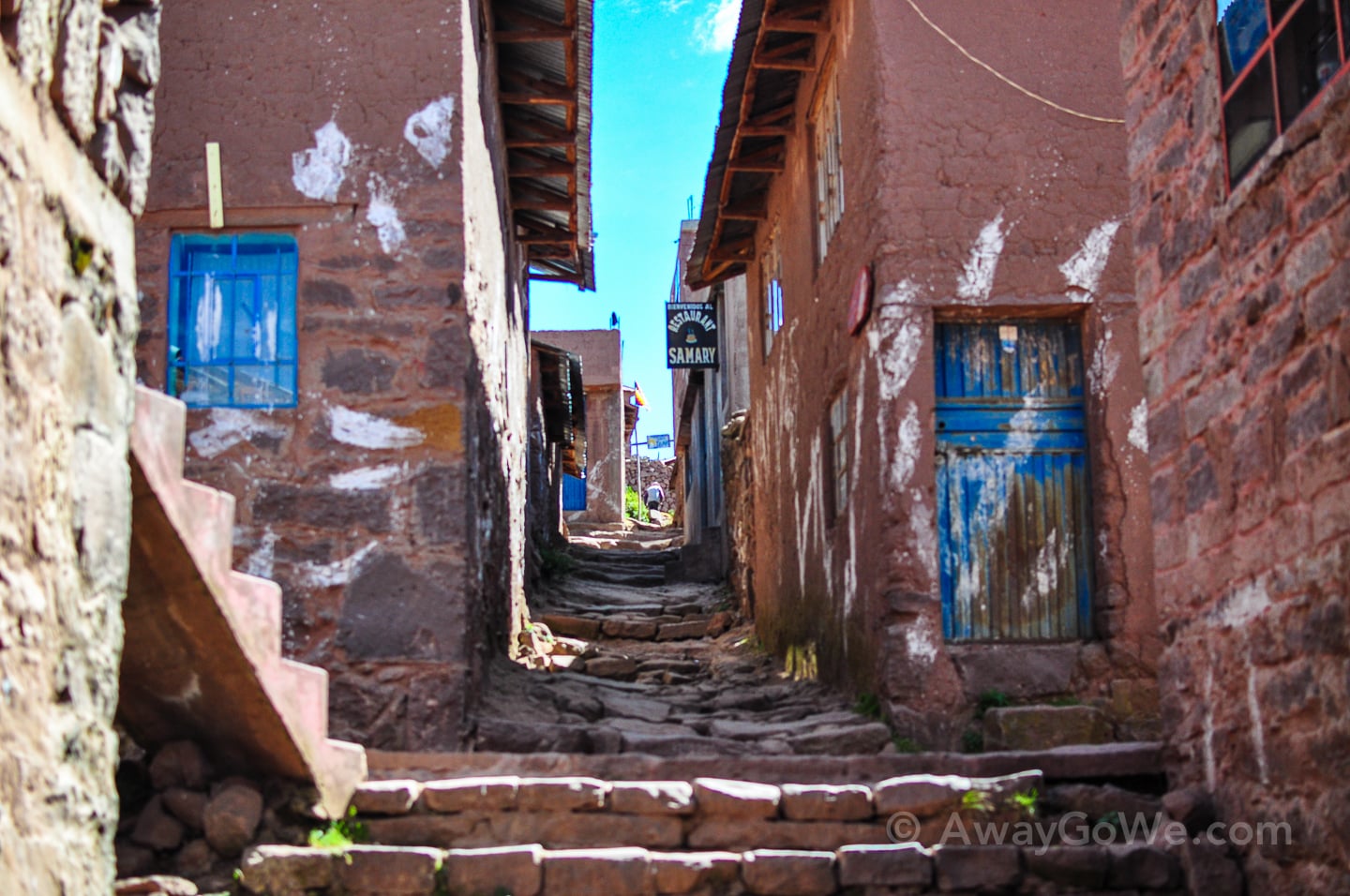 There are a few communal restaurants where residents share the work and the profits. Restaurant Comunal San Santiago was recommended to us and we were not disappointed [find on the map]. 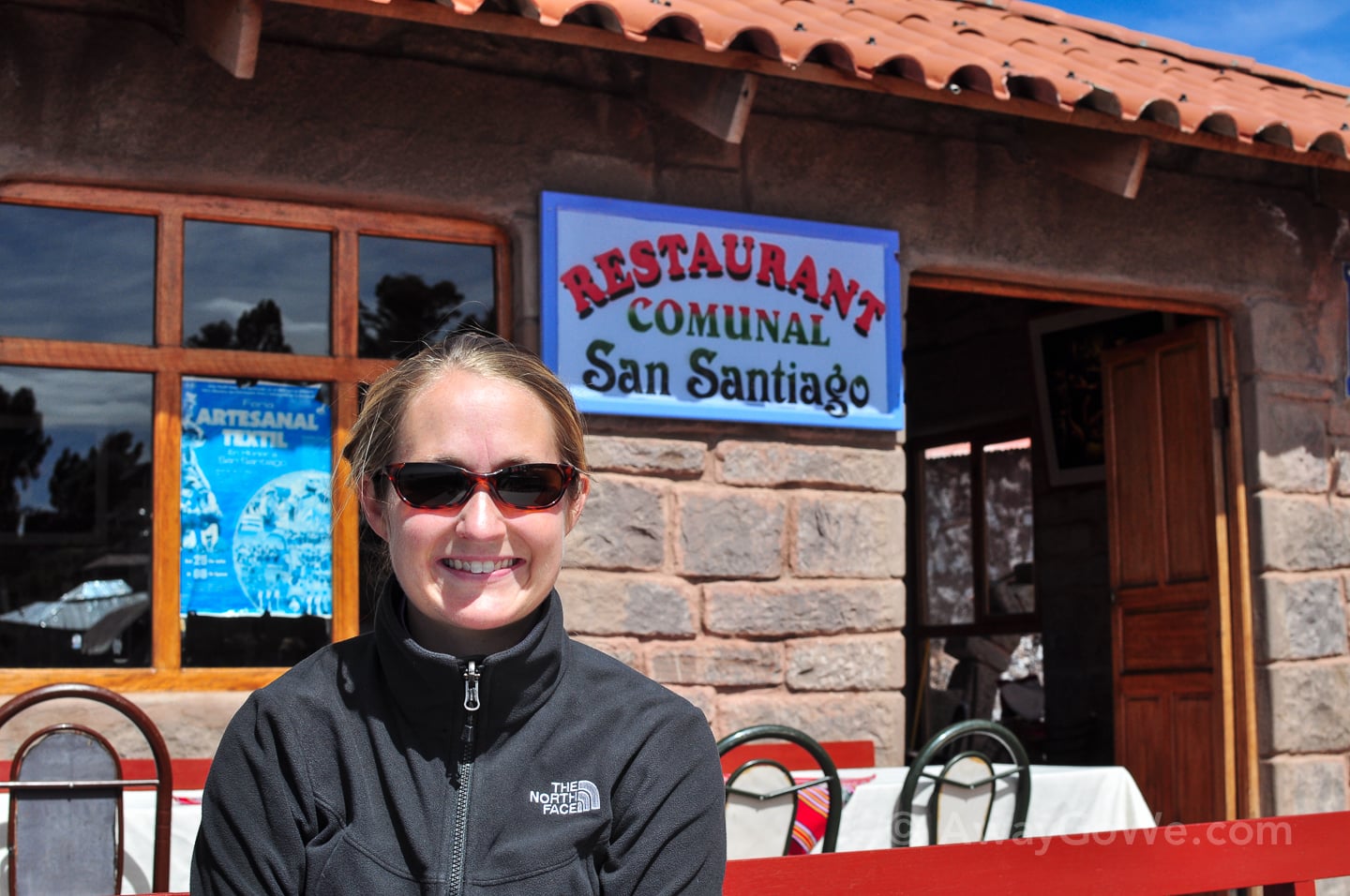 Every traditional meal in Peru seems to begin with the country’s national beverage: Inca Kola. 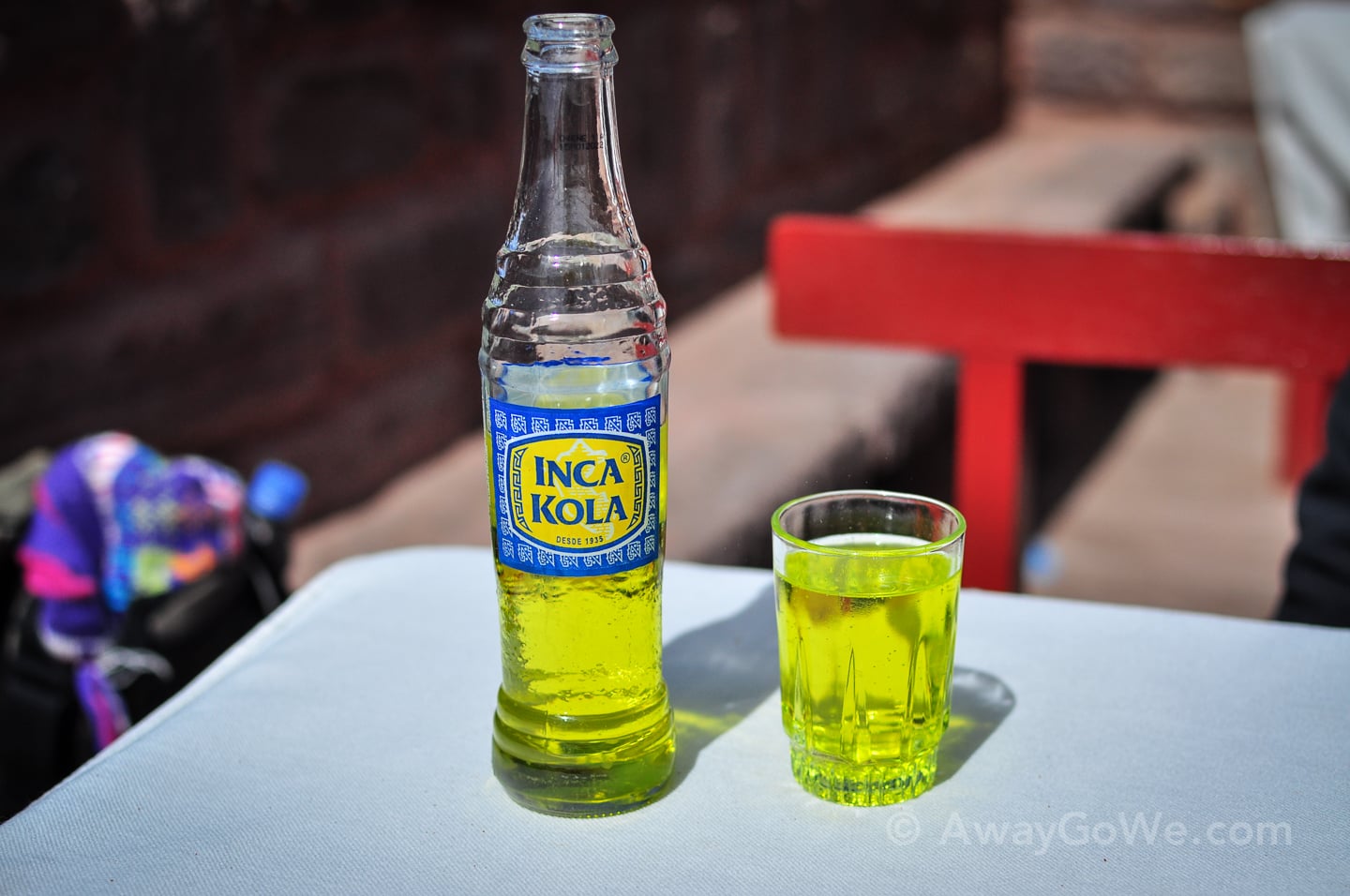 It’s as sweet as it is bright. Think radioactive yellow syrup!

The grilled tilapia and fries were AWESOME. 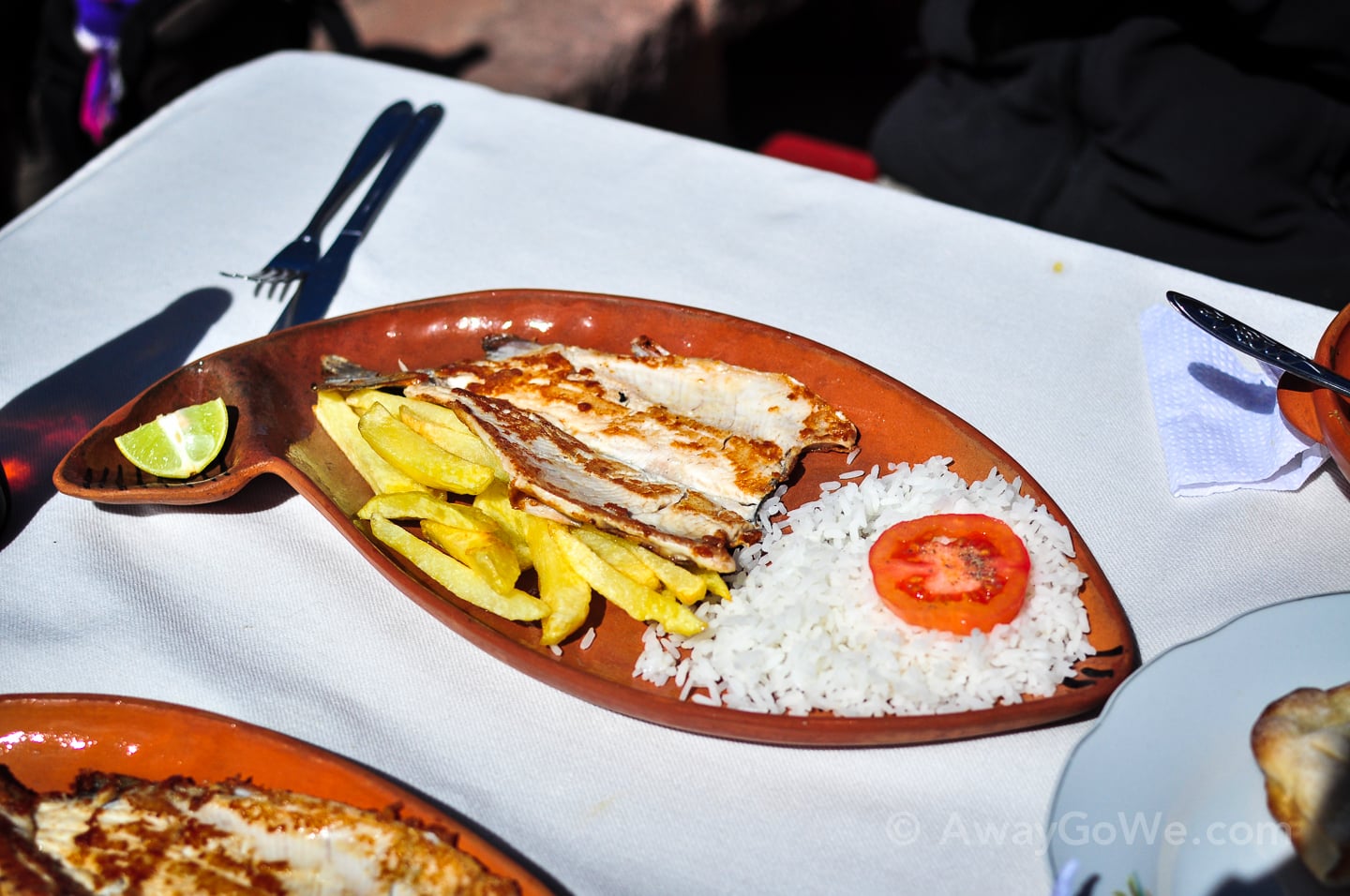 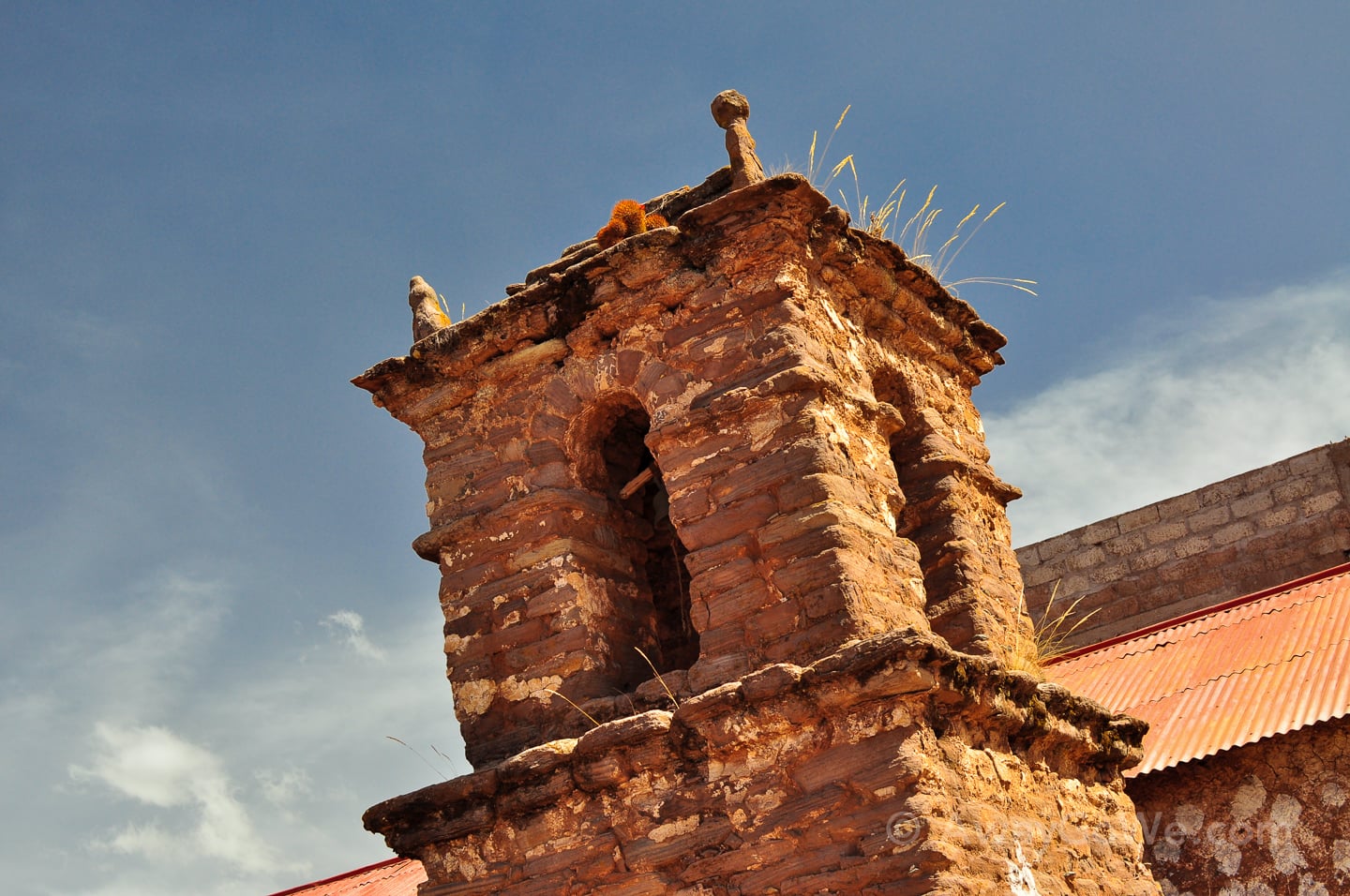 With happy bellies, we proceeded to the next task — finding a place to stay.

Taquile has a few higher-priced guesthouses, but is known for its more budget-friendly communal homestays.

We found that the homestays on Taquile differed quite a bit from what we found on Amantani.

Like Amantani, families take turns opening up their homes to visitors, but many of the family compounds (including where we stayed) have multiple rooms and don’t necessarily provide food.

Meals, however, can easily be purchased from the central plaza’s communal kitchens — which essentially makes a Taquile homestay virtually indistinguishable from a guesthouse stay, at least on the surface.

We stayed at the home of Ines and Tomas, along with their three children. However, our interaction with the family was much less than the previous night on Amantani — this family was much more business savvy and ran their home accordingly.

Due to the rough lake conditions mentioned earlier, boat service from the island back to Puno was suspended later that afternoon.

We had already planned to spend the night on the island, but several other visitors had only come for the day, making finding accommodation a bit tricky.

Once we were settled in our room, we discovered that we were going to be sharing our room with a group of day trippers who were stranded on the island.

We were informed that all of the island’s rooms were going to have to double or triple up for the night.

All part of the adventure of visiting Lake Titicaca!

Across the island, it’s evident that a lot of training and investment has gone into developing the tourism sector here.

And at the heart of this development is the Community Artisan Center, a UNESCO-funded museum and cultural center showcasing Taquile’s world-famous textiles and the people who craft them.

Unfortunately, I do not have a single photo of the world-famous textiles or the inside of the center, so you’ll just have to check them out for yourself!

I can tell you, however, that the island’s handwoven textiles and clothing are regarded as the highest-quality in all of Peru.

Interestingly, the knitting of the textiles is exclusively a male activity, starting at age eight. Women spin and dye the wool. 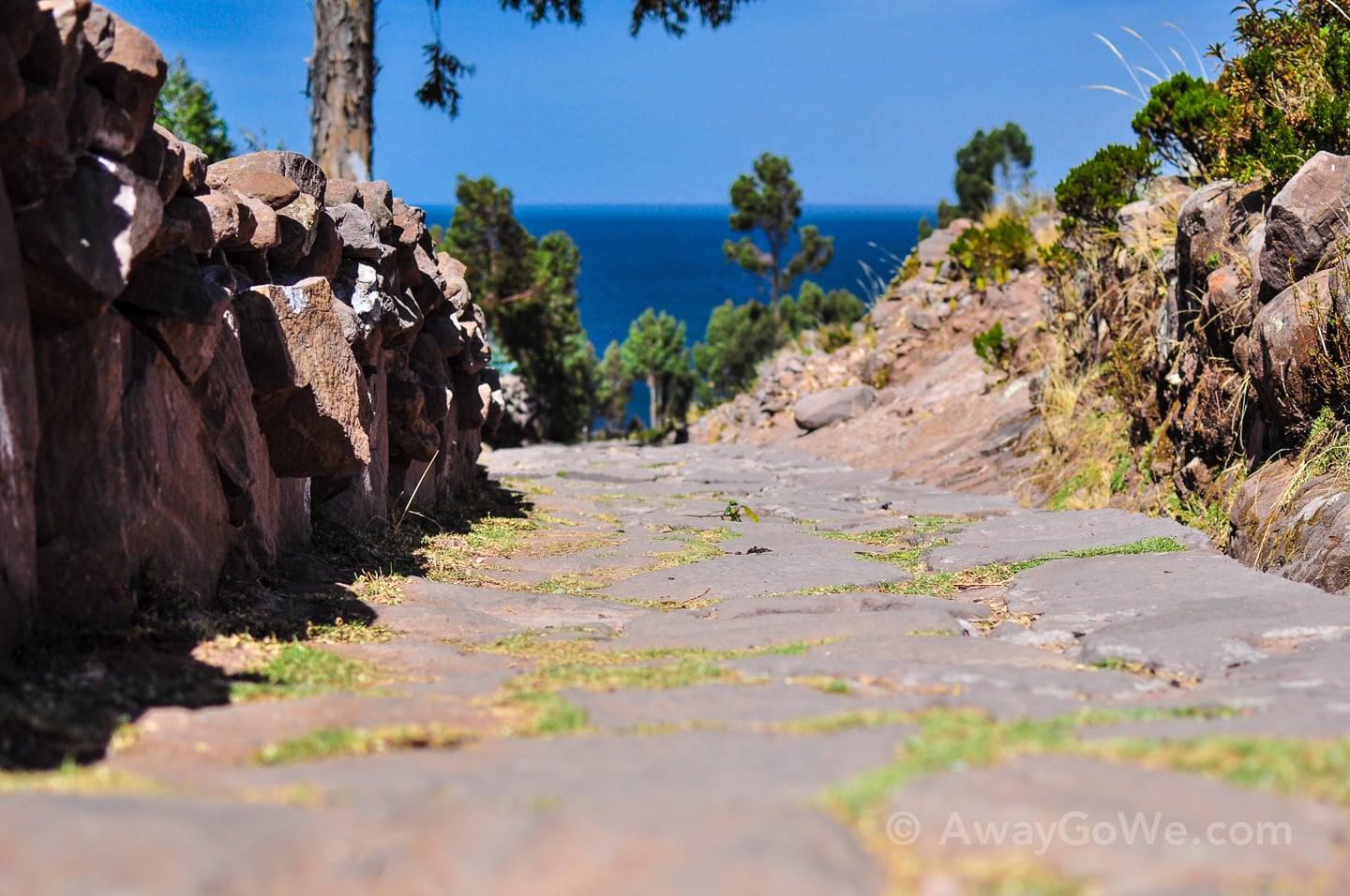 There are old stone footpaths across the entire length and width of the island that are very much worth exploring.

If you find yourself on the island at the same time as a number of other visitors, just follow one of the footpaths in any direction and you’ll quickly find yourself away from the pack, mingling only with livestock and local residents.

Isla Taquile is a treasure trove of picturesque old stone buildings and breathtaking vistas at nearly every turn. 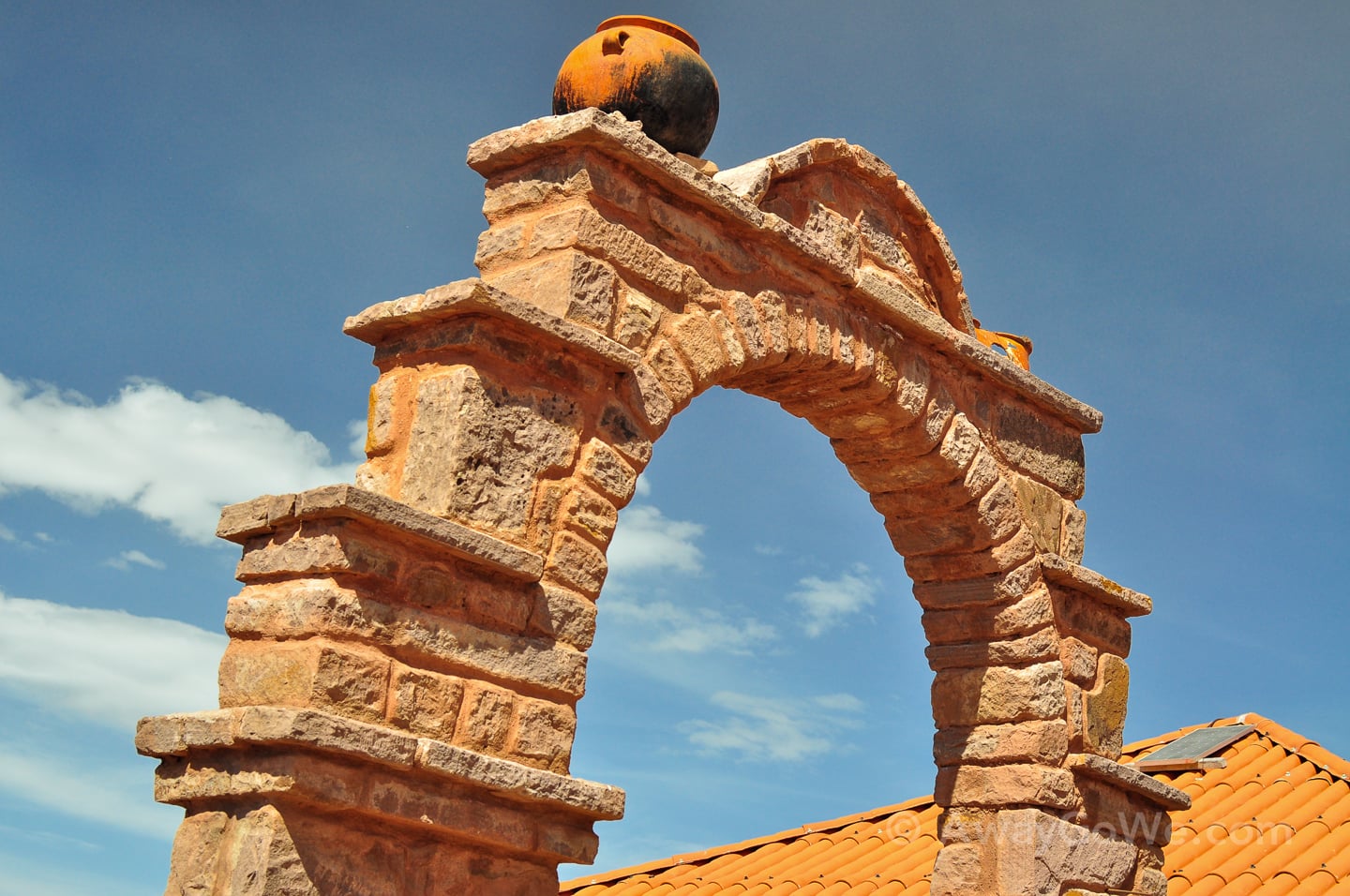 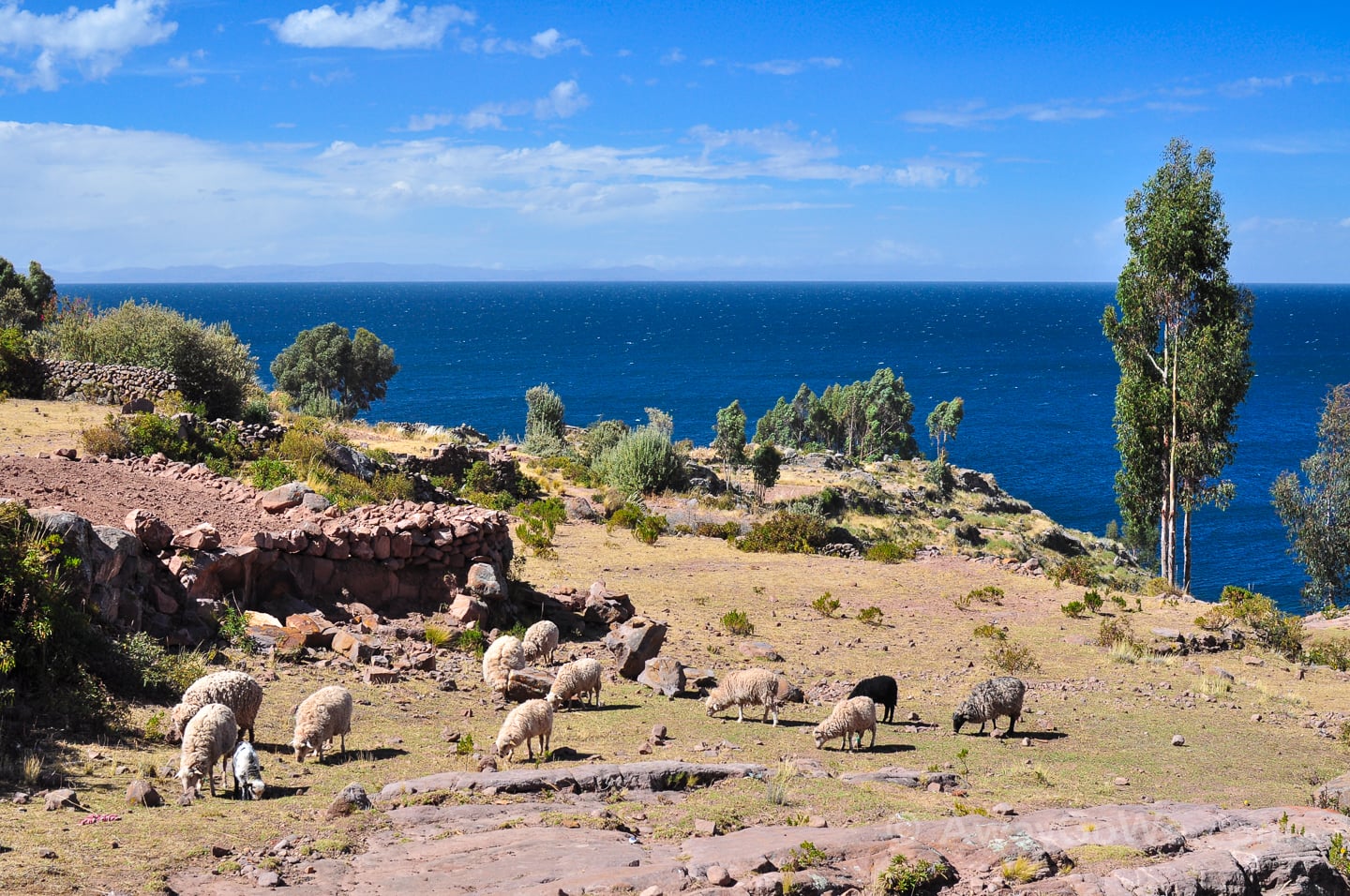 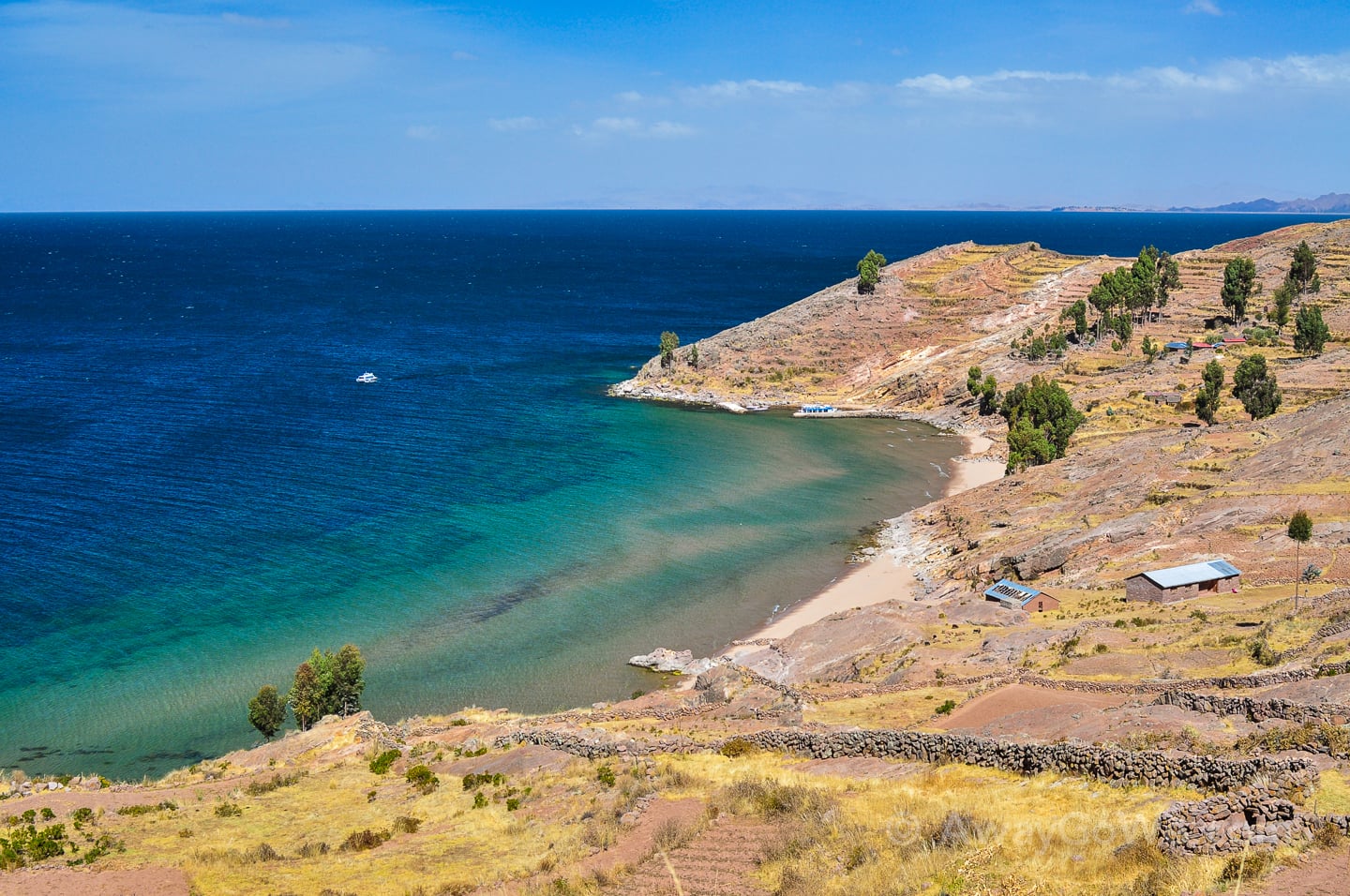 An inviting beach — if only it wasn’t the middle of winter (July)! 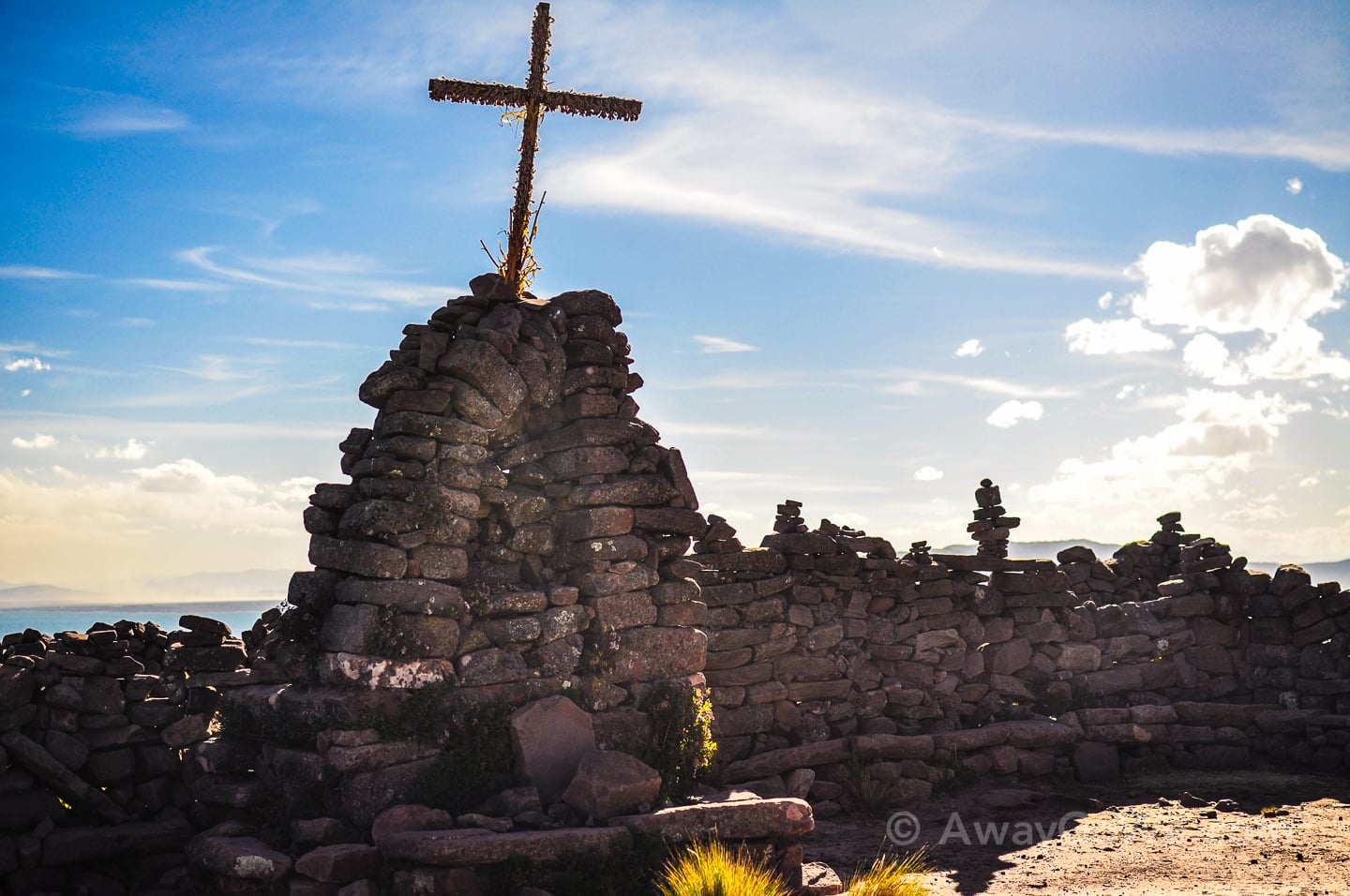 Taquile also has its share of interesting ruins and temples atop its highest points. The majority of residents are Catholic, though they’ve largely adapted the Christian faith to their own traditional beliefs, with Pachamama (Mother Earth) being at the center of harvesting and fertility. 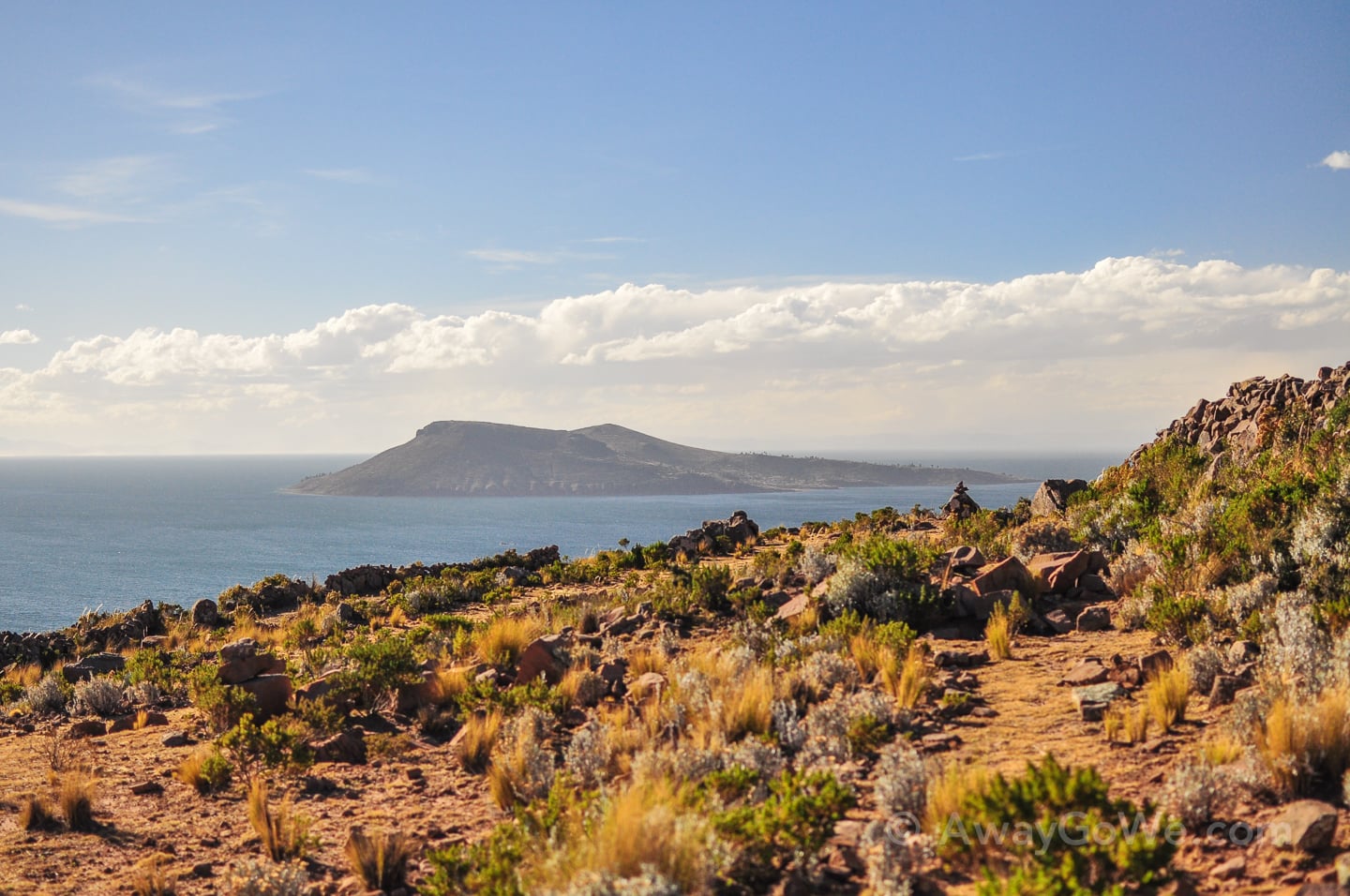 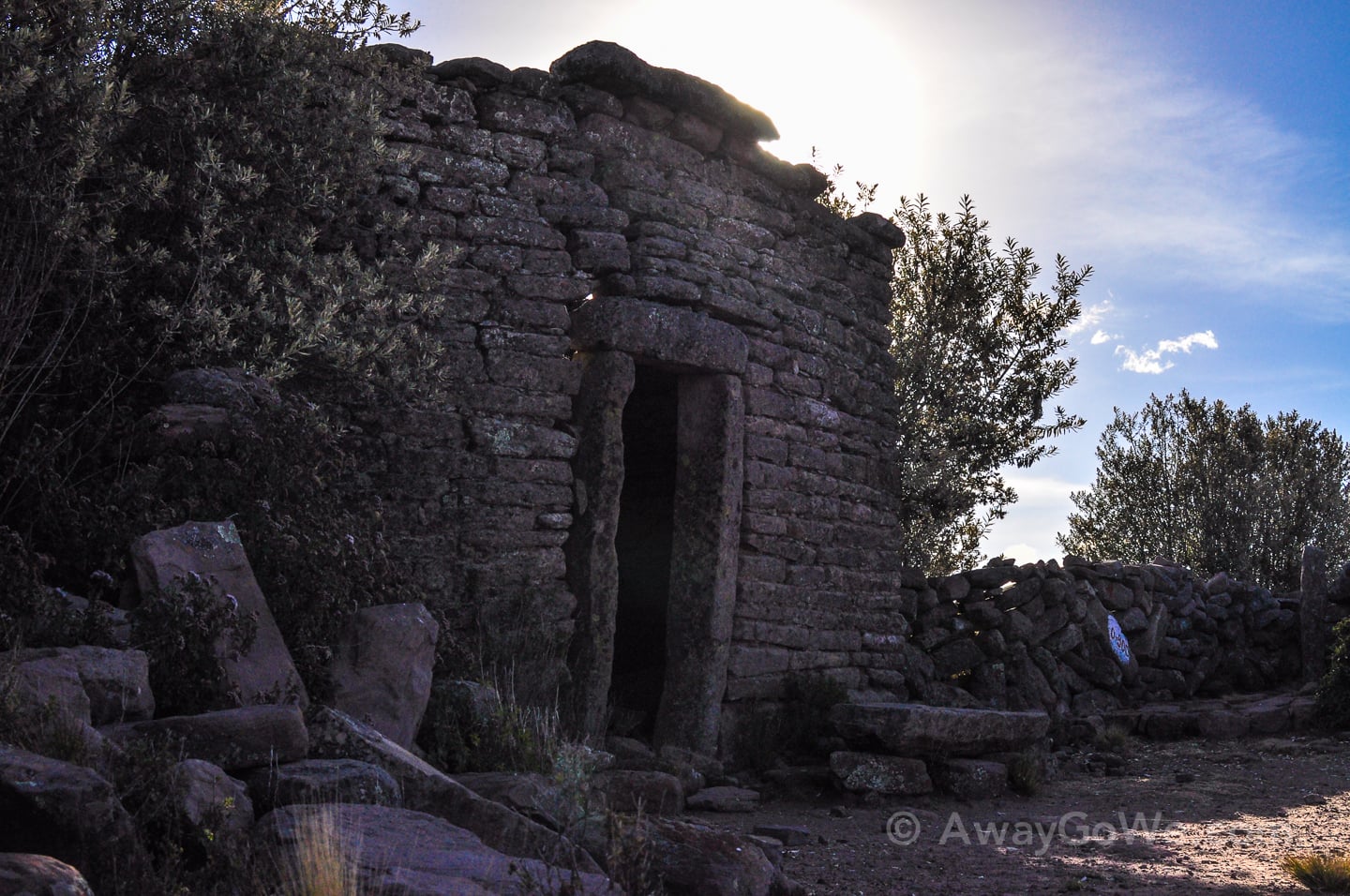 We explored the island, from top to bottom, which is no small feat, given the island’s rugged terrain and size. In all, we covered about six miles, encountering beautiful isolated bays, idyllic farms, and ancient ruins. 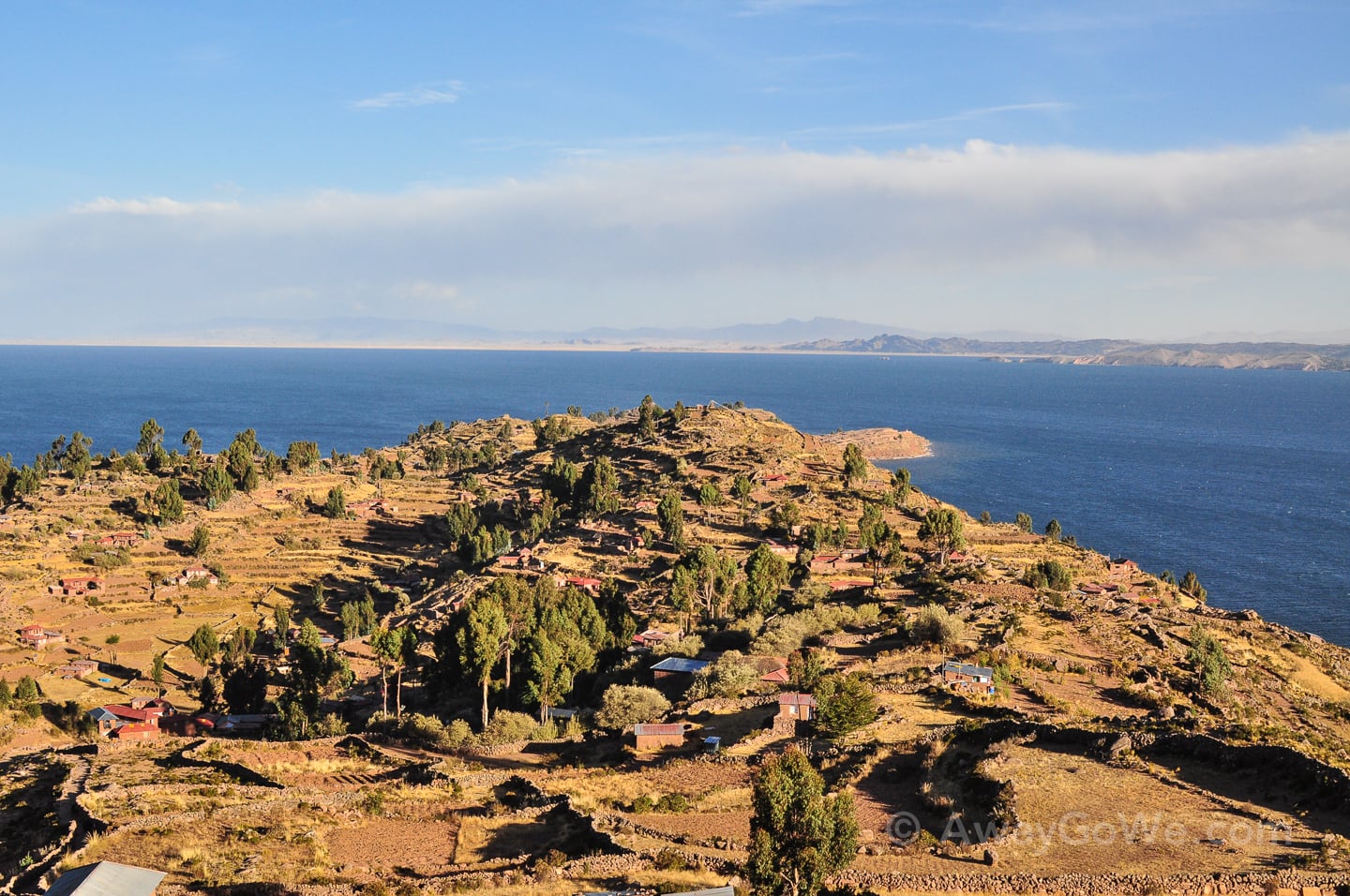 And once again, we were treated to another amazing Titicaca sunset — bathing the entire island in a rich golden hue. 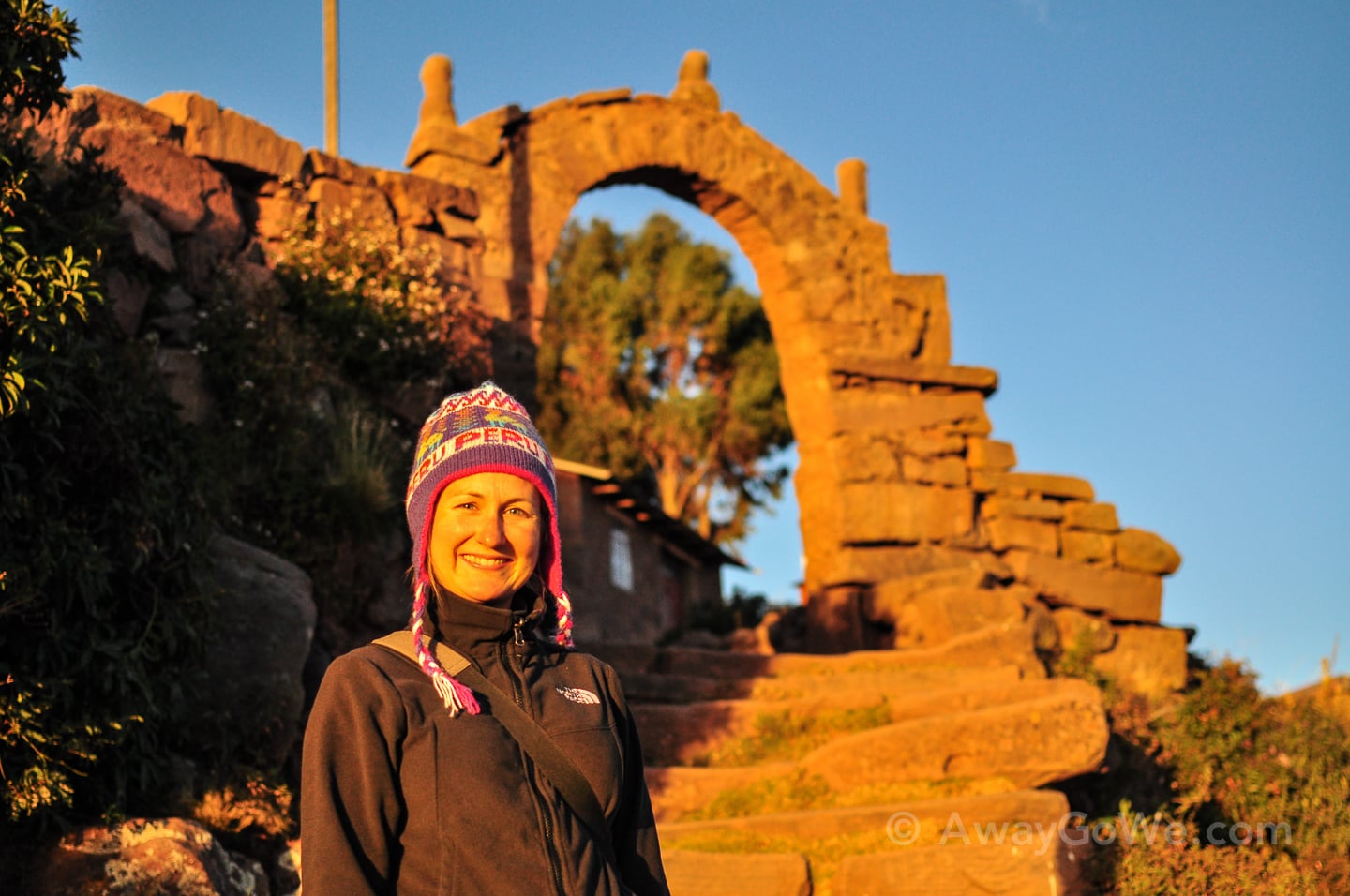 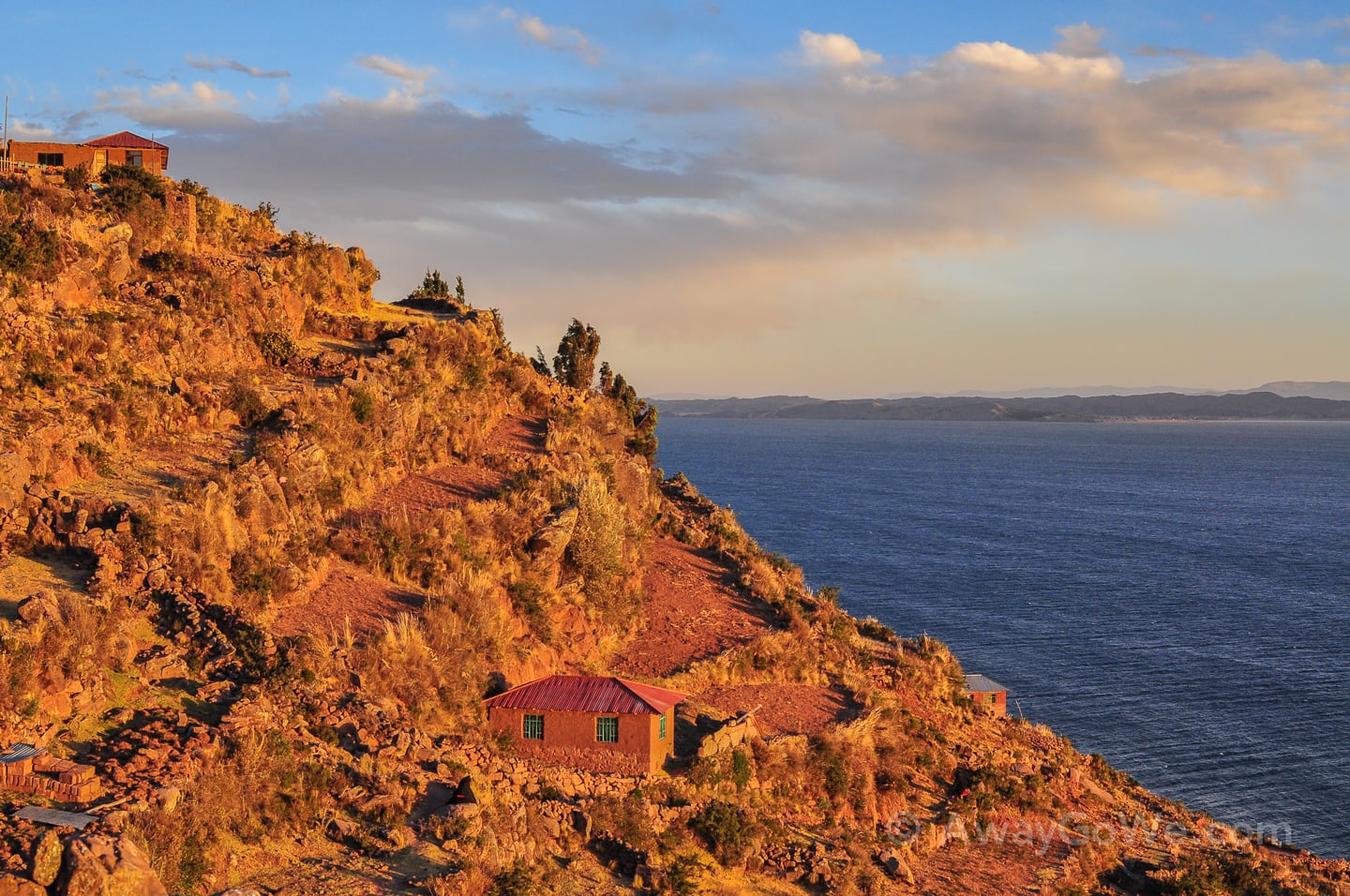 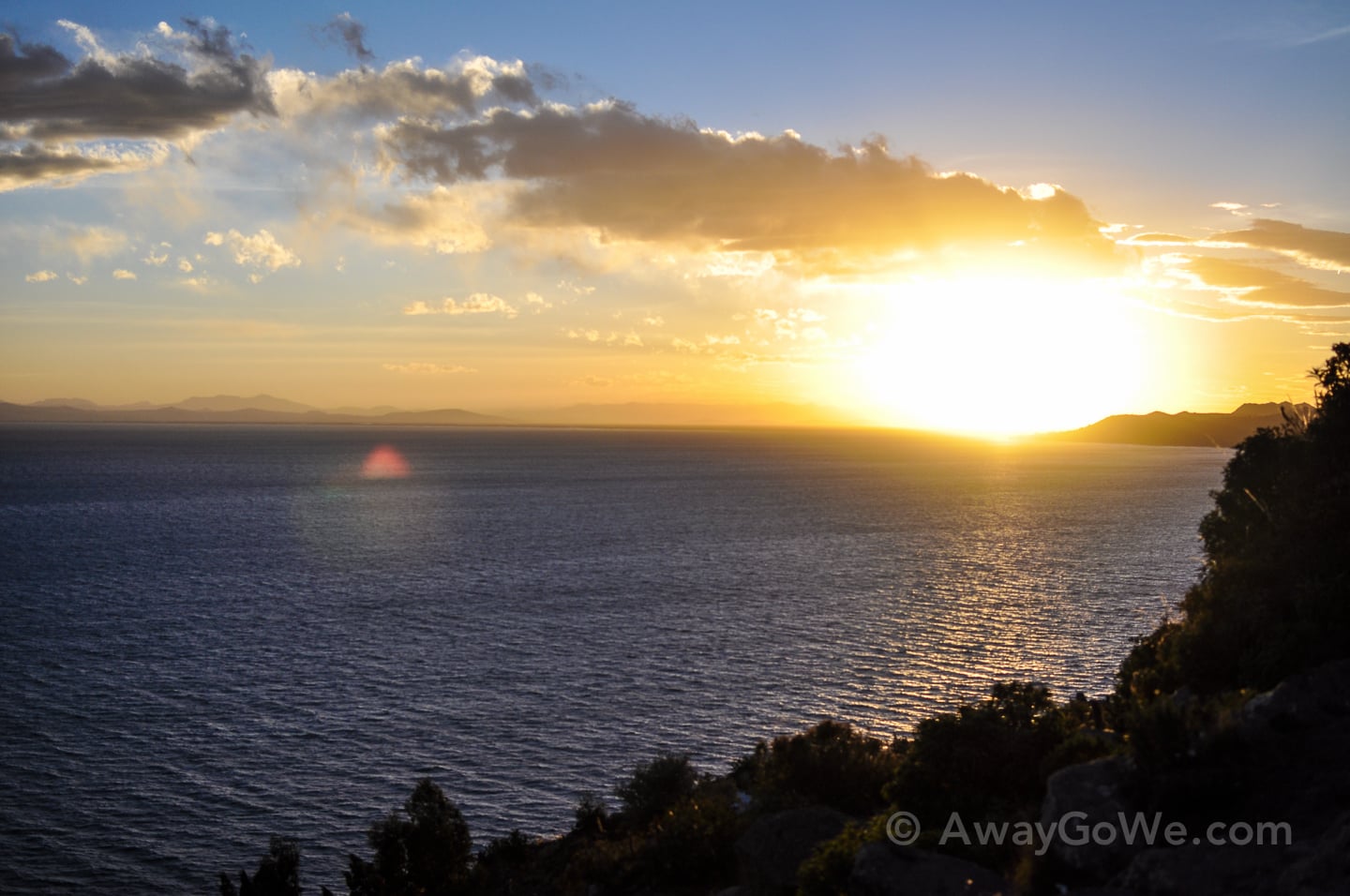 Back at our homestay, we learned that boat service had resumed in our absence. The hoards of stranded visitors were able to leave the island after all, and we once again had a room to ourselves! 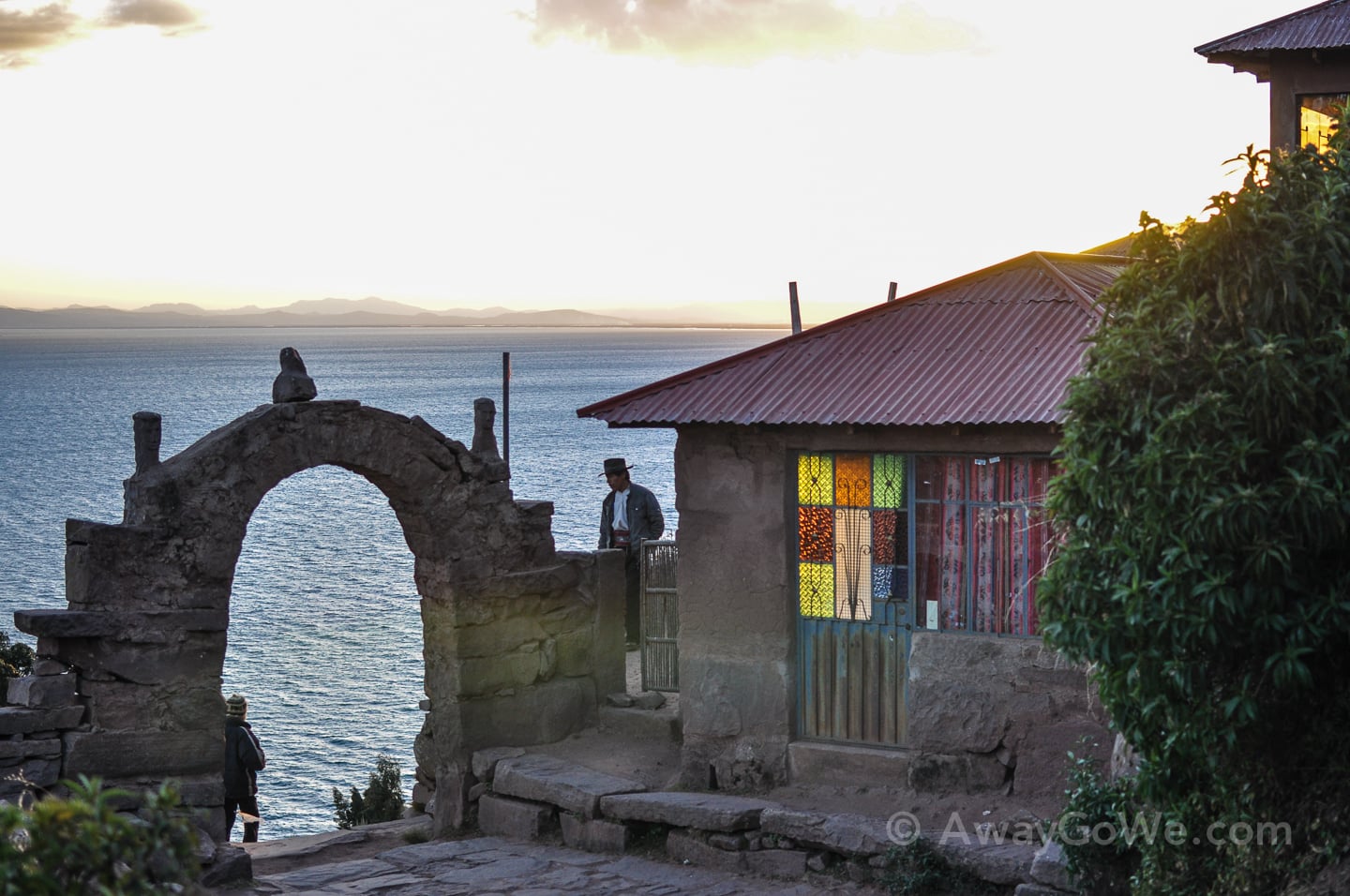 The quiet and solitude we felt after most of the other visitors had gone was unforgettable.

We sat for a while in the main plaza watching the Taquileños go about their evening activities, strolling with their children and chatting with neighbors, without the distraction of tourists to tend to.

The next day, we took an early morning stroll around the central part of the island before collecting our packs and heading down to the boats.

We saw a lot of knitted finger puppets in Peru, but the handwoven ones from Isla Taquile stood out among the rest. 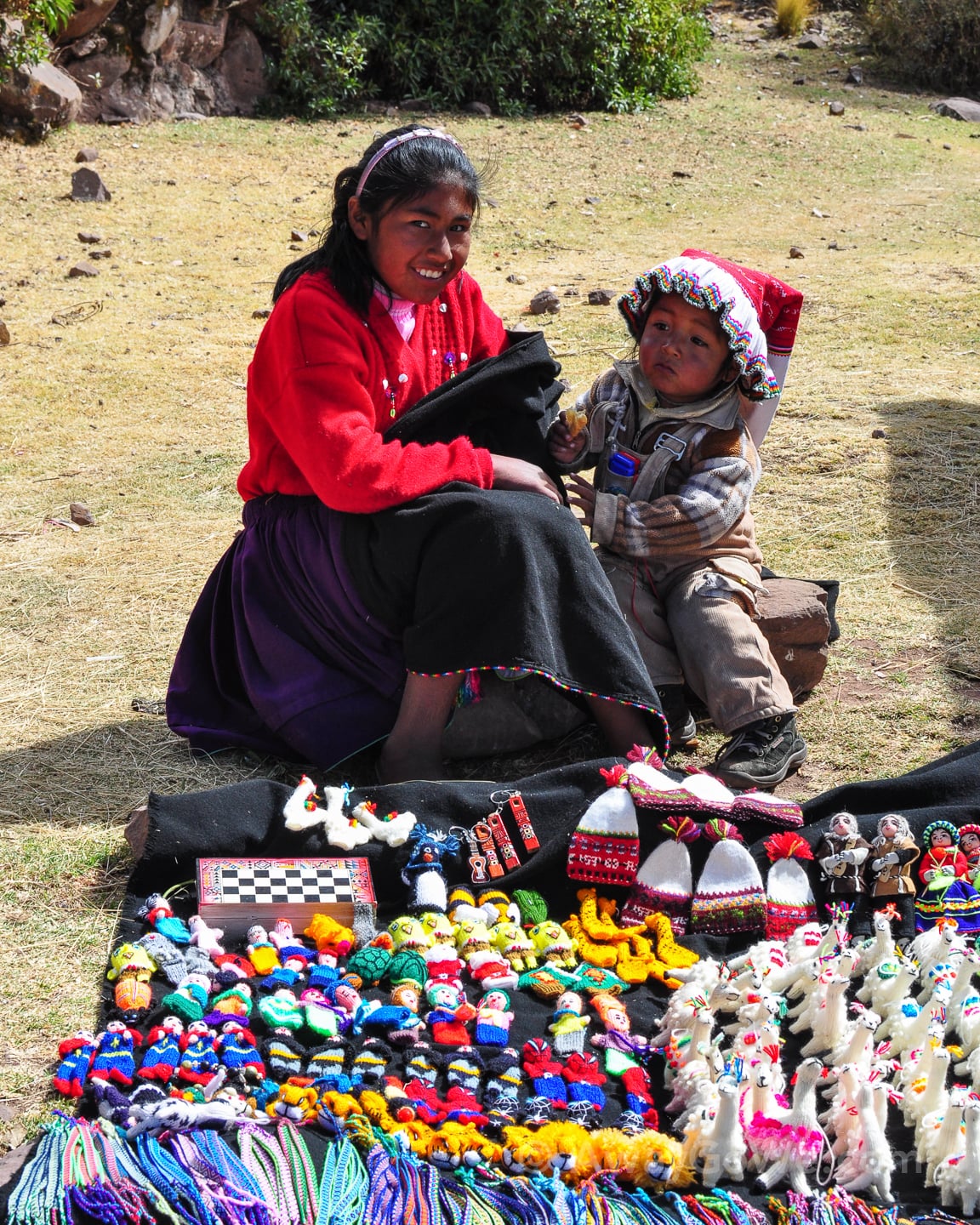 We don’t buy a lot of gifts while backpacking (we’re traveling on a shoestring budget and have to carry what we do happened to buy with us for the next several weeks). But Lori couldn’t resist purchasing several of these finger puppets from these two sweet kids. 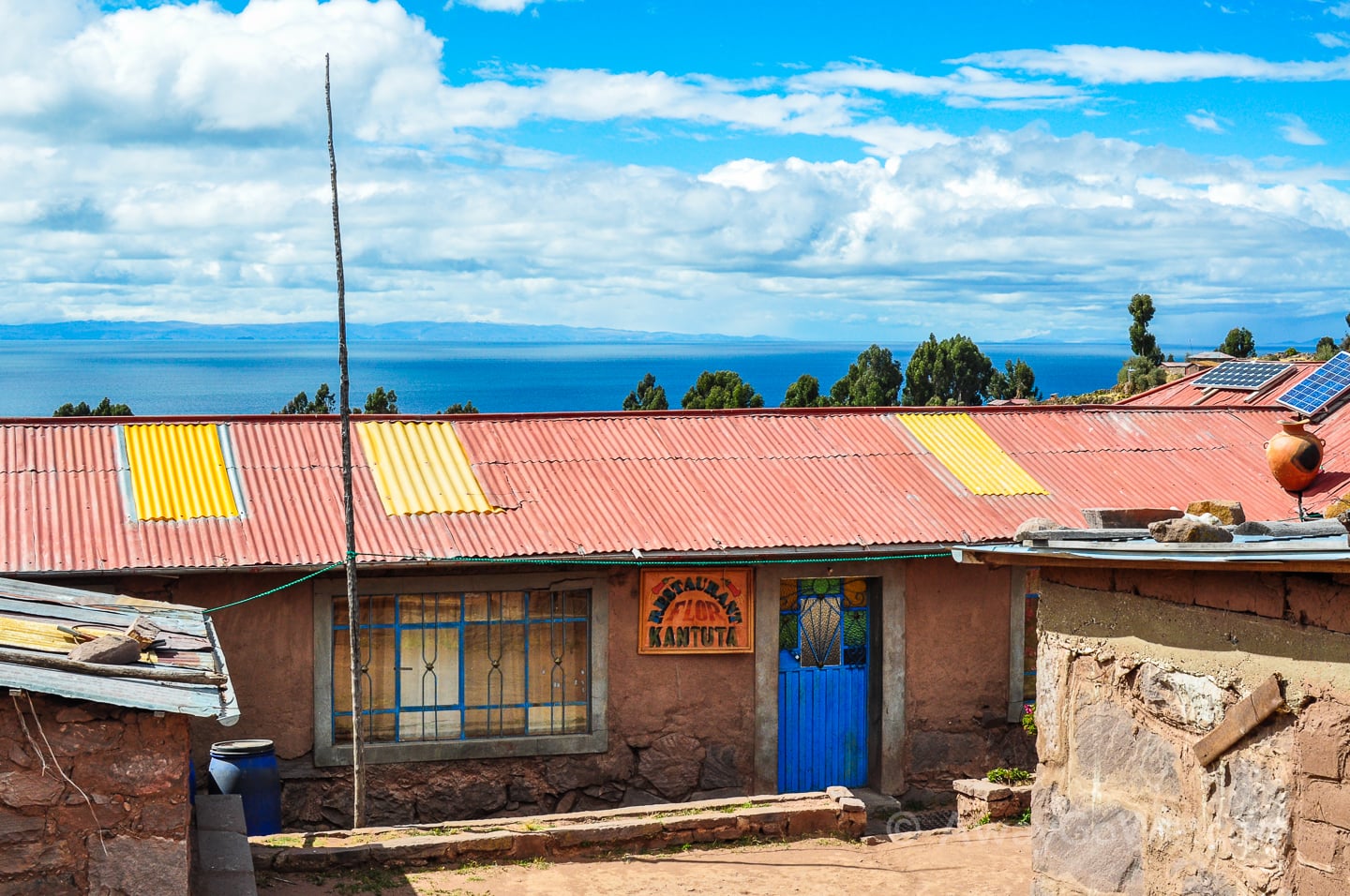 Fortunately, the port for ferries back to Puno were much closer to the village than the port we arrived into from Amantani.

The ferry that was leaving first was in the middle of a cluster of boats, which meant that we had to climb, boat-to-boat with our packs to the departing ferry. Fun times!

We were treated to smooth sailing on the long trip back to the mainland. 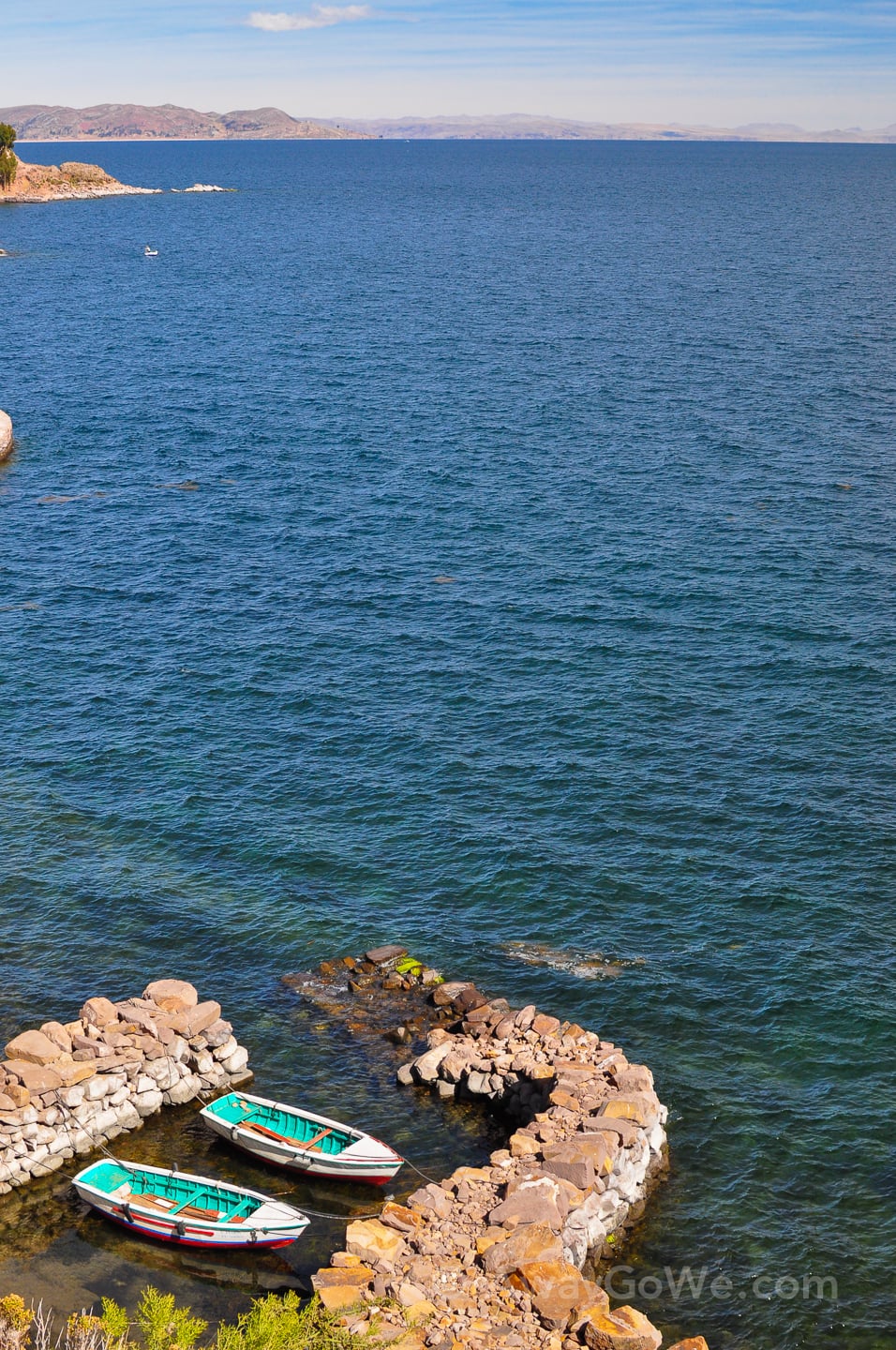 That night, in Puno, we took a walk down the main drag. Despite the bone chilling cold, the central plaza was bustling with activity.

A man was handing out flyers to passersby which we instinctively declined, until the bold print (in Spanish) suddenly registered: “HAPPY HOUR: TWO FOR NONE.”

Two drinks for…none? None what? How does that work? We decided to check it out. Who wouldn’t? But what was the catch?

The bar looked legit, and was full of people. Ok, great. We asked the barman about the 2-for-none happy hour. How does that work exactly?

We finished our 2-for-none and headed down the street to find our restaurant.

After a long and very enjoyable few days on the islands of Titicaca and Amantani, we treated ourselves to mainland fare — chicken, noodles and plantains. Energy for the long night ahead in below-freezing temperatures at 12,000 feet!

How was your visit?
Tell us about it in the comments below. 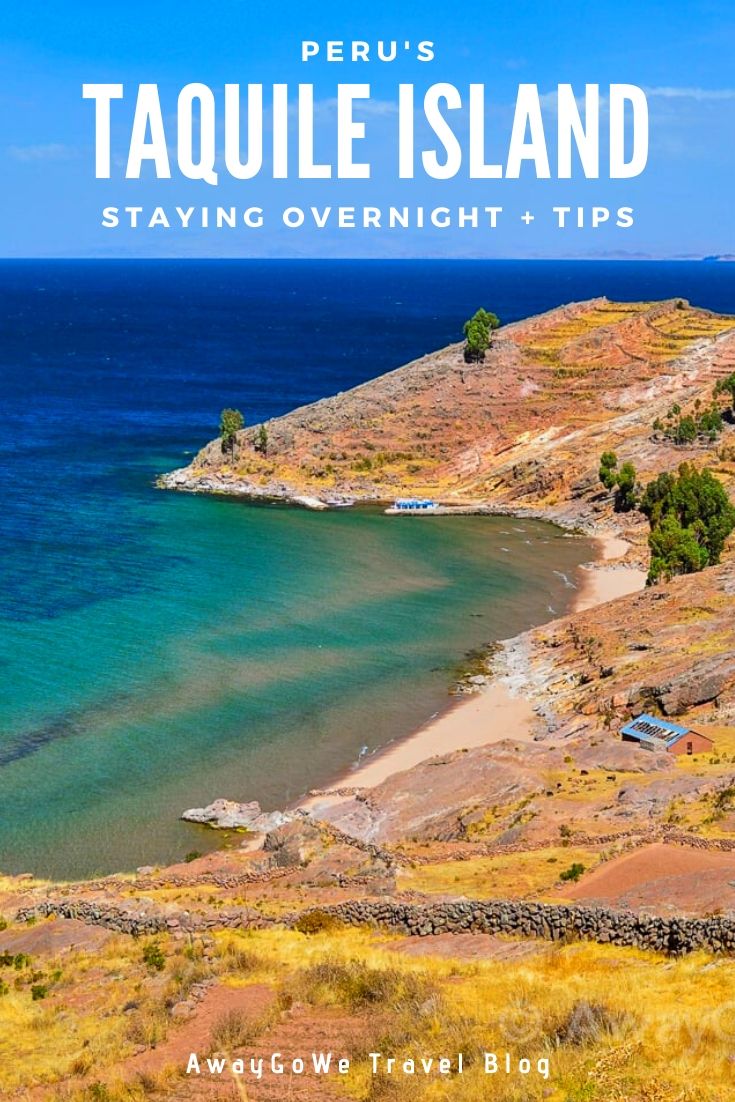 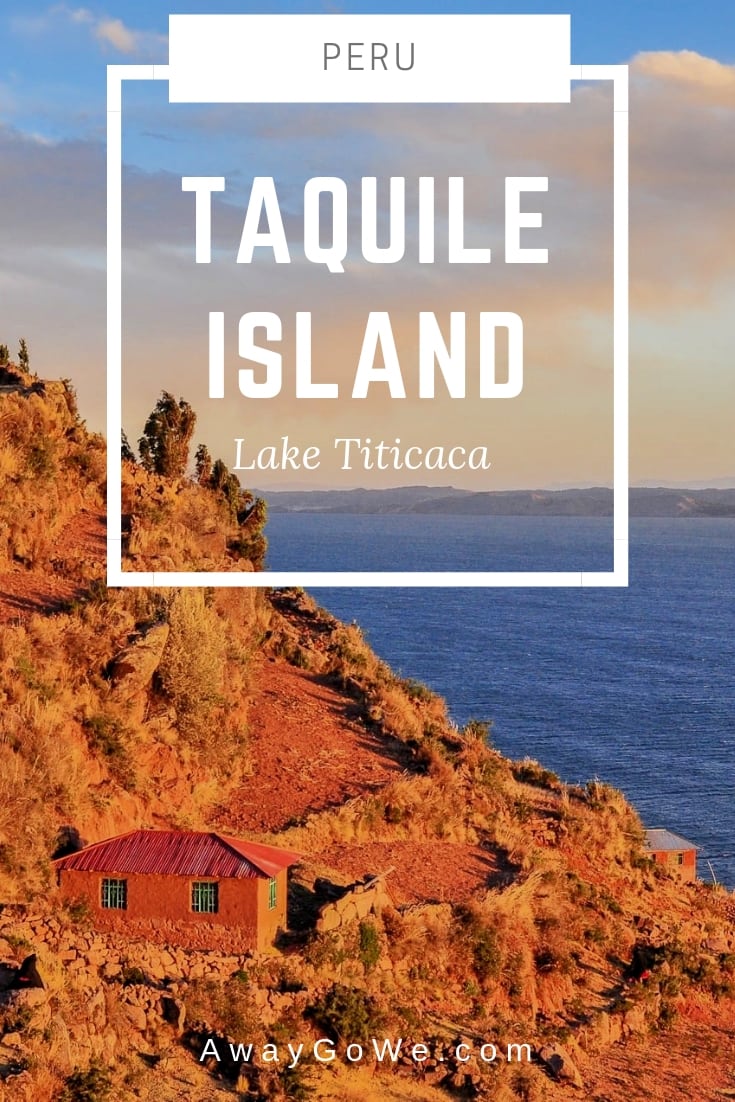