Riding an ATV along a narrow, winding Andean highway wasn’t something we ever planned on doing, or really even thought of during our backpacking trip along the Ecuadorian Andes. But when in Baños…

A bicycle seemed like an appropriate mode of transport for tackling the Baños Waterfall Route — a day-long excursion to experience some of the areas natural attractions — that is, until all the hiking we had been doing started catching up with our legs.

Yes, the waterfall route is mostly downhill from Baños, but that also means that it is mostly uphill coming back. In a few days, we’ll be trekking the Quilotoa loop as well, so a rest is in order. Luckily, Baños offers numerous options for day trips and modes of transport to do them by.

As part of a six-week budget backpacking trip through the length of Peru and Ecuador in July/August 2010, we spent a few days in the town of Baños de Agua Santa (often styled as simply, Baños). The town is something of an adrenaline and outdoor enthusiast capital of the country, offering seemingly endless opportunities for fun and exploration in a stunning setting.

Read more about our stay in Baños 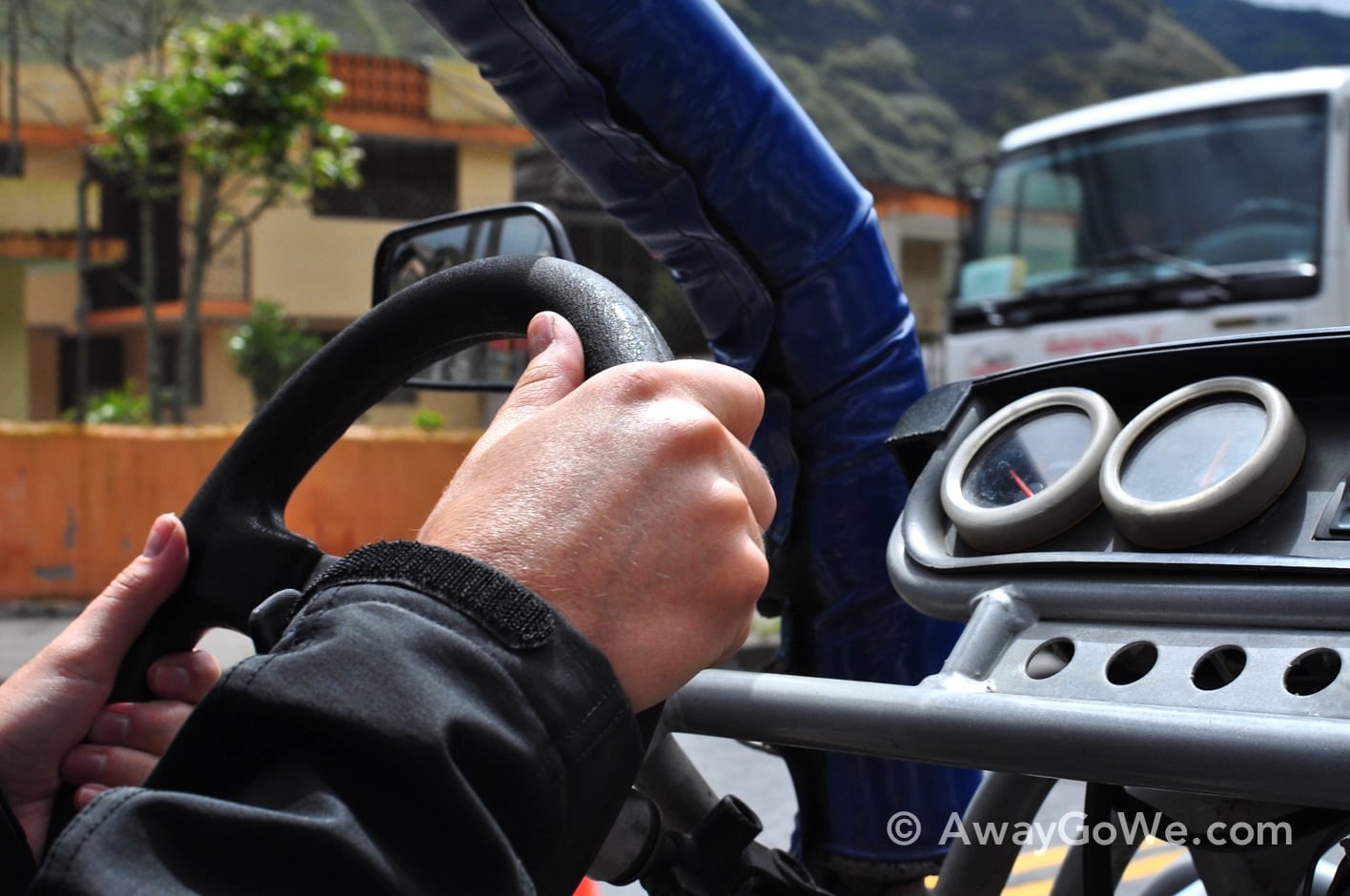 The route that we most frequently took between our guesthouse and the center of town sent us by one of several buggy rental shops. The first afternoon/evening we derided the idea and the people who would do such a thing. The next morning/afternoon, we wondered who actually rented them and where they went. By the time evening rolled around, we were hobbling back to our guesthouse after a [very] long day of hiking up on the volcano and the idea wasn’t sounding so bad. And, by the next morning… 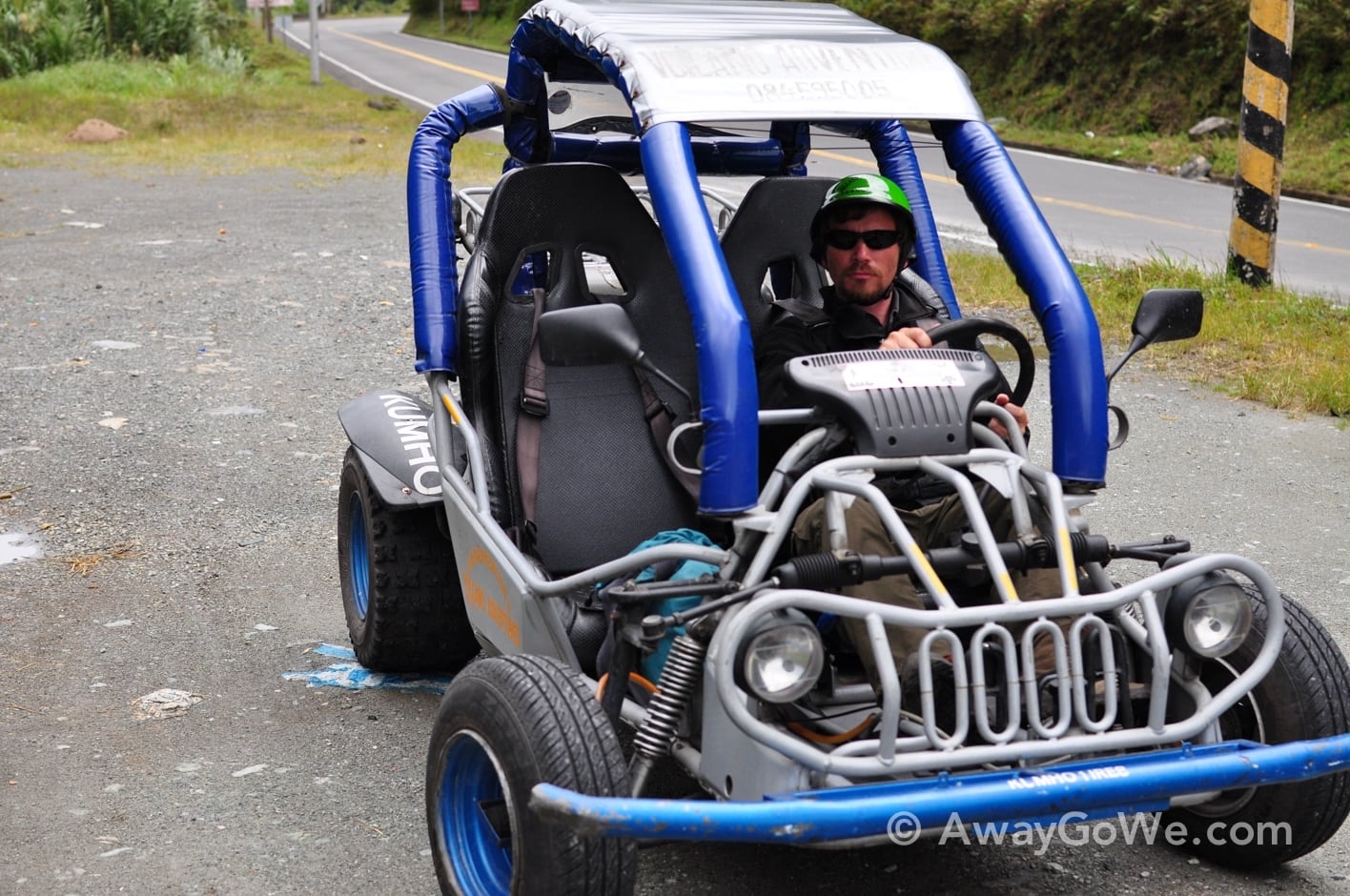 About the Baños Waterfall Route

The Waterfall Route (Ruta de las Cascadas) follows a 61 km (31 mile) highway connecting Baños with the lowland jungles of the Oriente. Dropping 1,000 meters (~3,300 ft.) along the way, the road allows access to a dozen of Ecuador’s most spectacular waterfalls along the way.

While it would have been possible for us to cover the entire stretch by tour bus, we opted to set our sights on the first 17 kilometers (11 miles) east of town, and 20+ miles in a dune buggy with frequent stops for hikes along the way made for a perfect distance for the day. 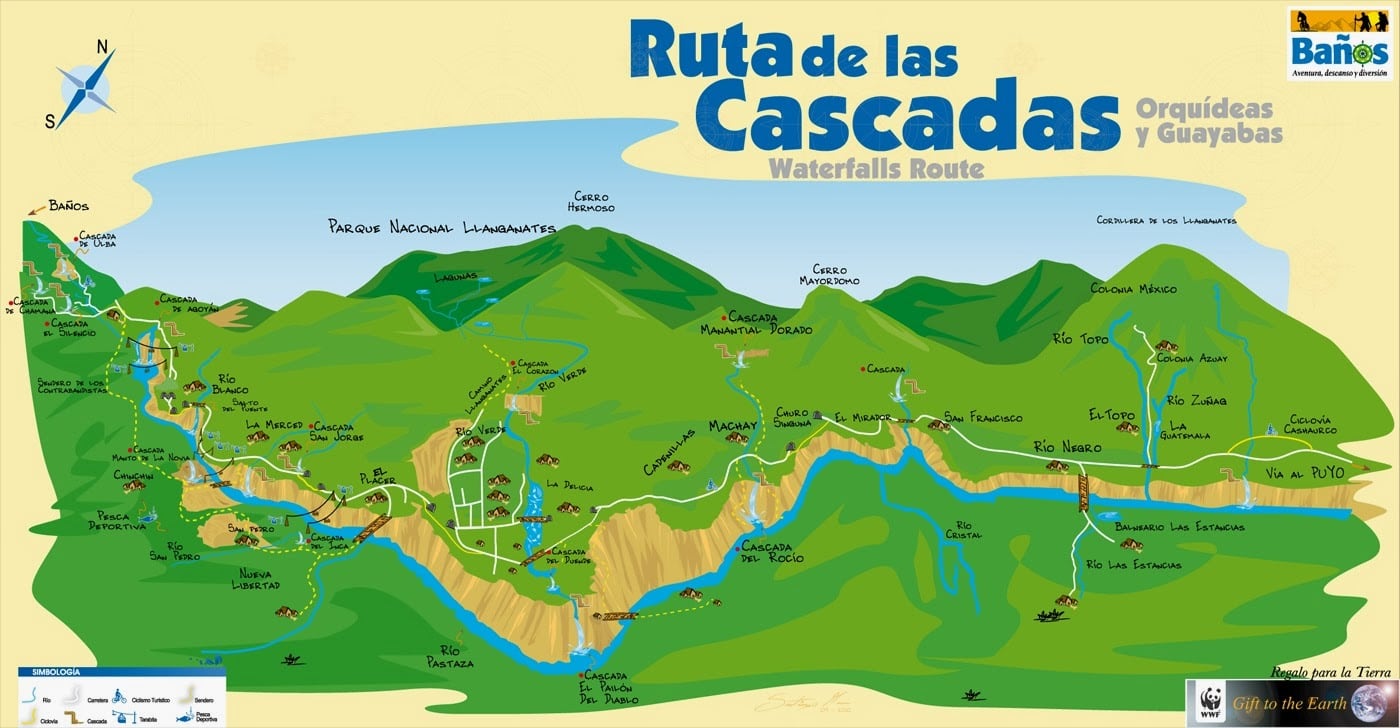 The map above (from the Ecuador Tourism Board) gives an overview of the meat of the route, with Baños at the far upper, left corner. We made it as far as the village of Rio Negro before turning back.

If you love waterfalls, jungly mountain scenery, and a bit of a thrill, this has got to be one of the best in the world. Plus, we were pleasantly surprised at the manageable/low number of visitors/ tourists/ backpackers along the route (being August and one of Ecuador’s most popular towns). Best of all, most of the other visitors to the falls accessed them via tour buses, and we rarely saw other vehicles on the road, which meant we largely had the road to ourselves. 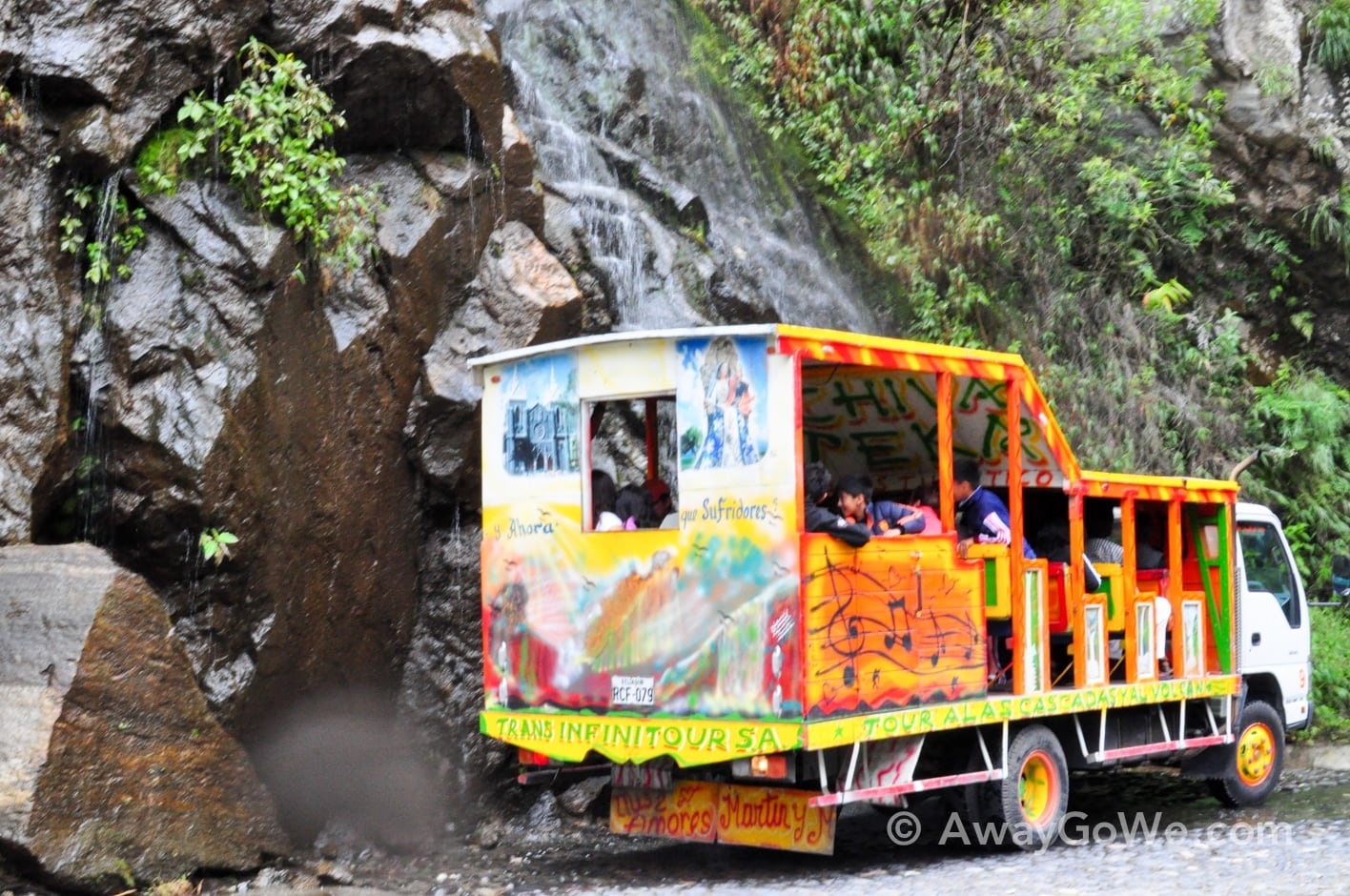 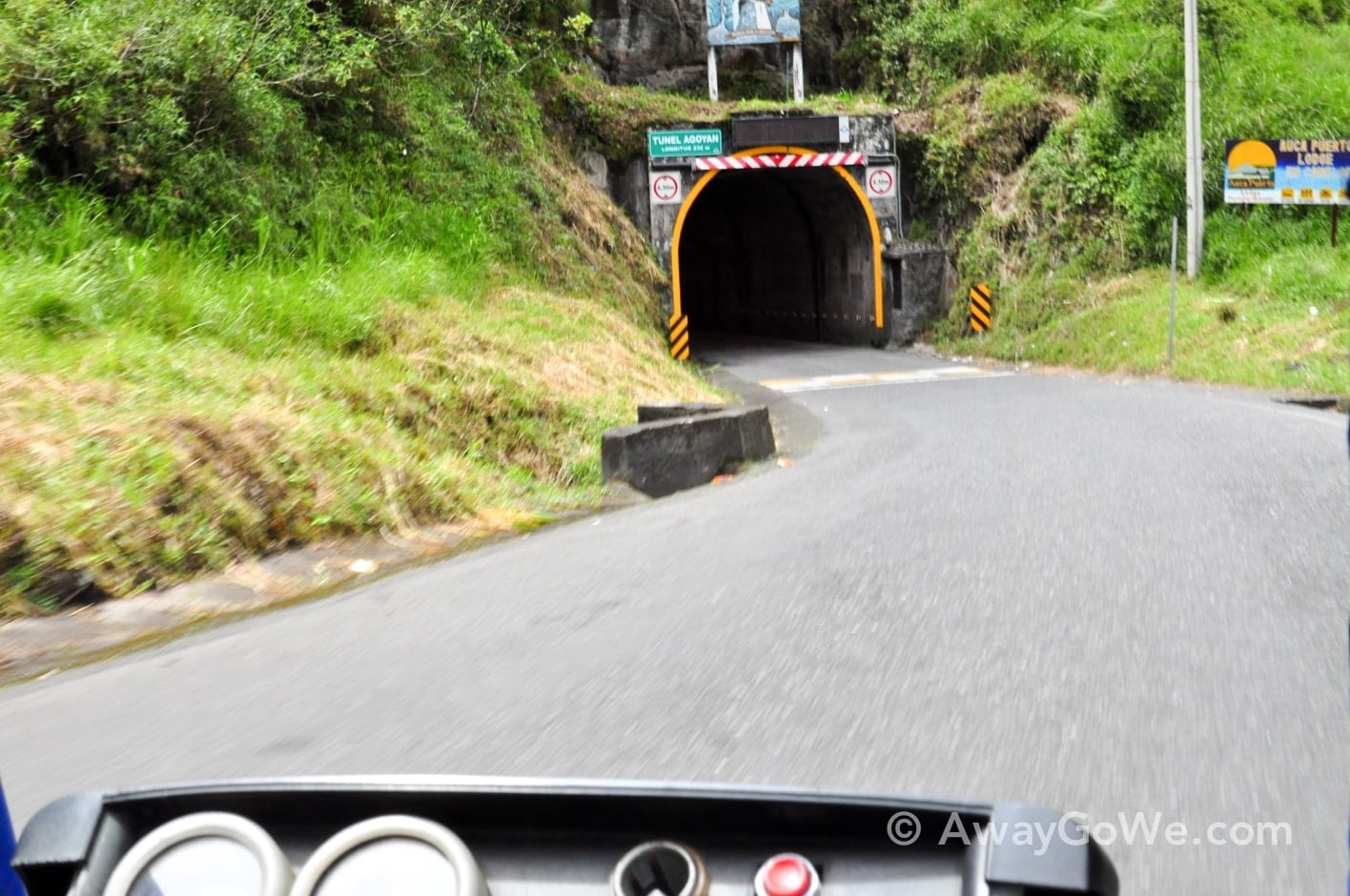 The Waterfall Route by ATV/Buggy

Due to the low number of vehicles, smooth road and spectacular scenery, this route was a blast to drive in our little dune buggy. A number of narrow tunnels dot the highway, but nearly all of them have a buggy/bike/pedestrian bypass, which is mandatory if you aren’t a full-size vehicle.

We chose our buggy company (Volcano Adventure) mostly due to the quality of their vehicles. They looked about the most solid and well-maintained of any company’s (August 2010). Nowadays, I suspect most folks would pull out their smart phones and look up the company on TripAdvisor or Yelp, but in 2010, such options didn’t exist to us, so we relied on good ol’ fashion common sense, a bit of faith, and an openness to making mistakes.

While we’ve made strong efforts to maintain this philosophy in subsequent travels, technology has definitely managed to creep in and influence our style of travel over the years, for better or worse. Sometimes it is unavoidable, but most of the time it has come about as a result of our aversion to risk when it comes to booking guesthouses or utilizing travel companies.

Generally, I’d say though that the added time spent researching has paid off — we are rarely disappointed with our choice and get a lot more bang for the buck. The added value and fewer headaches, however, does come at the cost of losing spontaneity, serendipitous discoveries, and genuine experiences. The challenge is always in finding a balance between the two. Now, back to the Waterfall Route…

Check Out These Unforgettable Experiences Around Baños 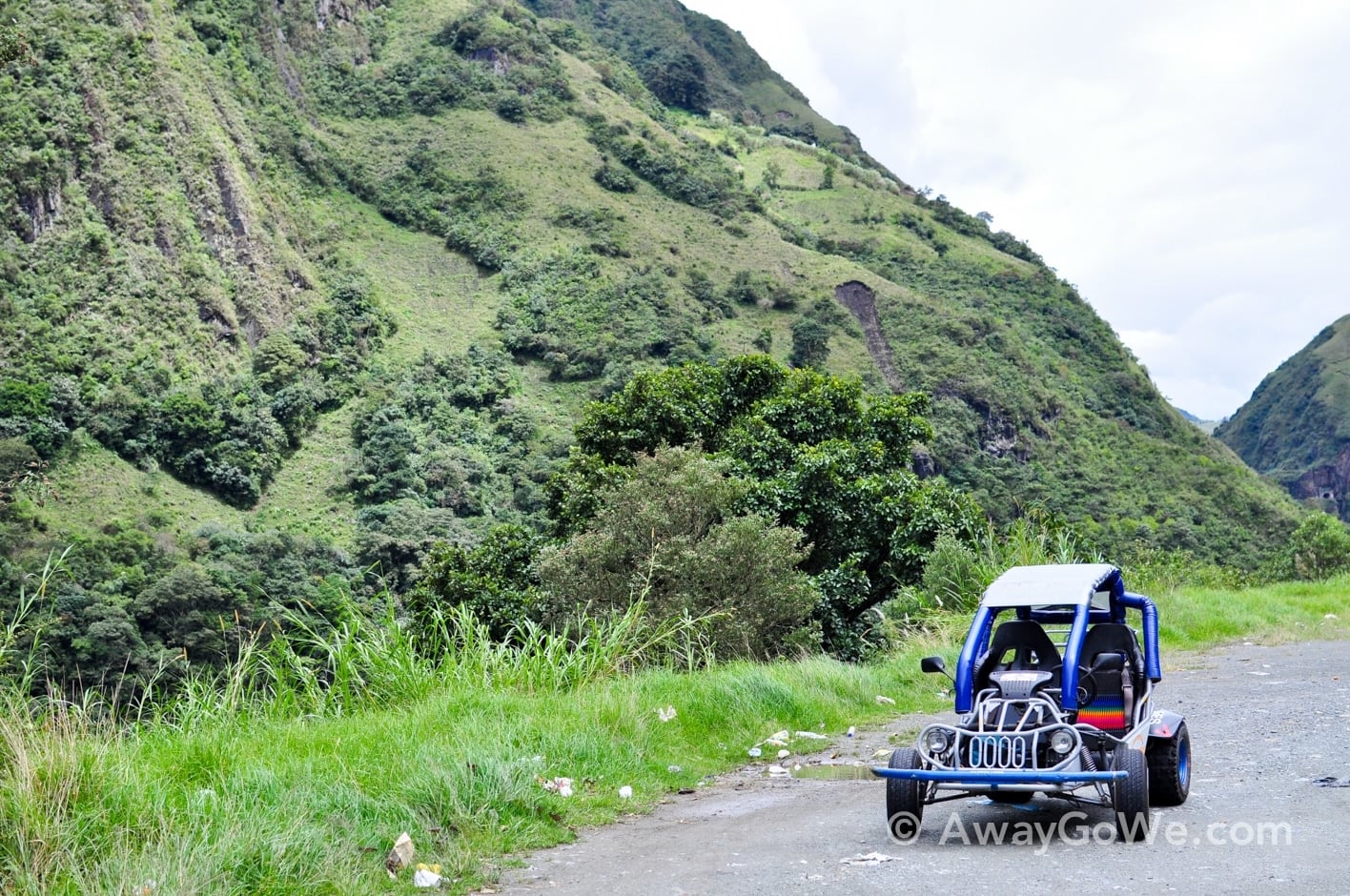 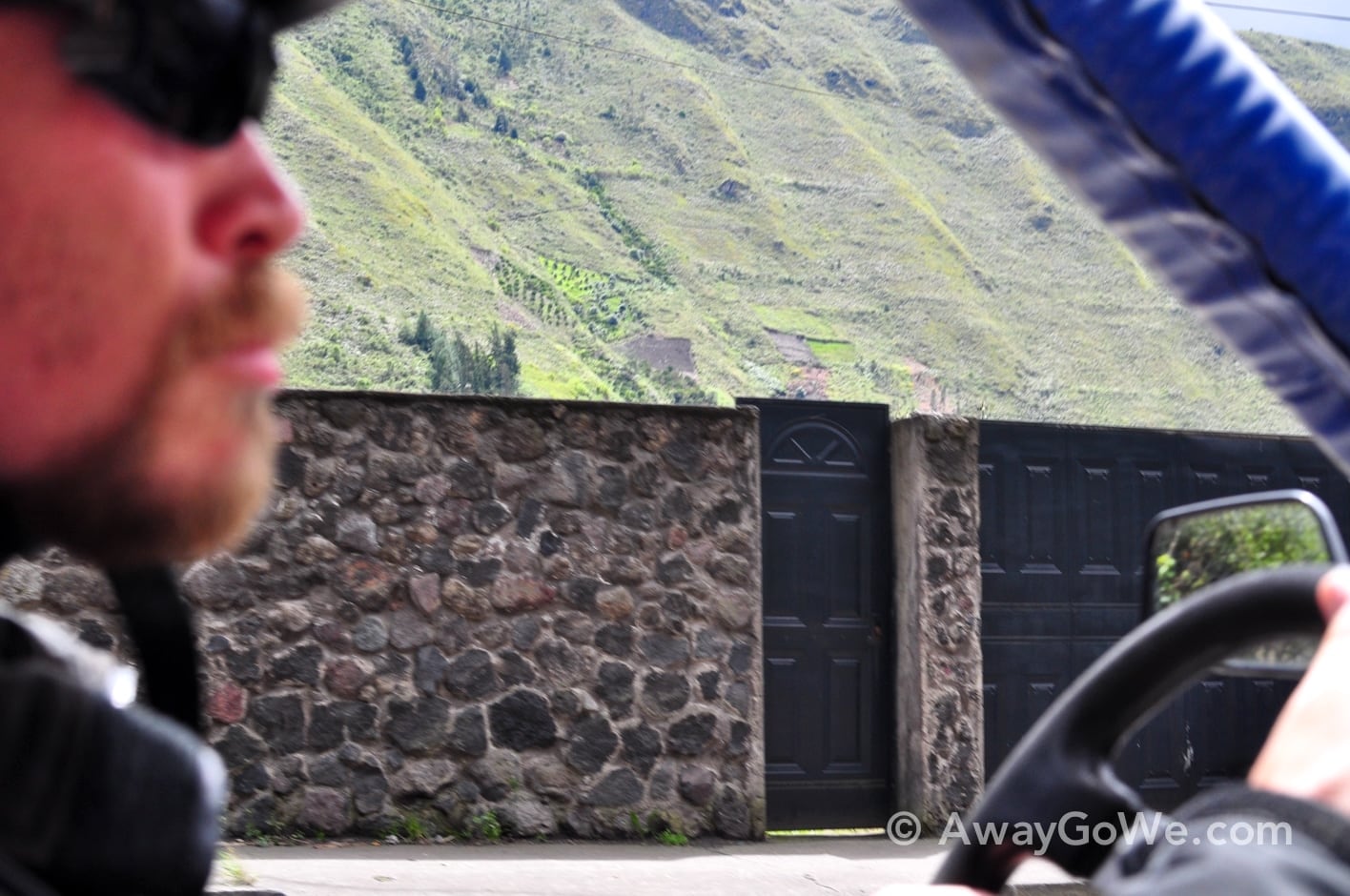 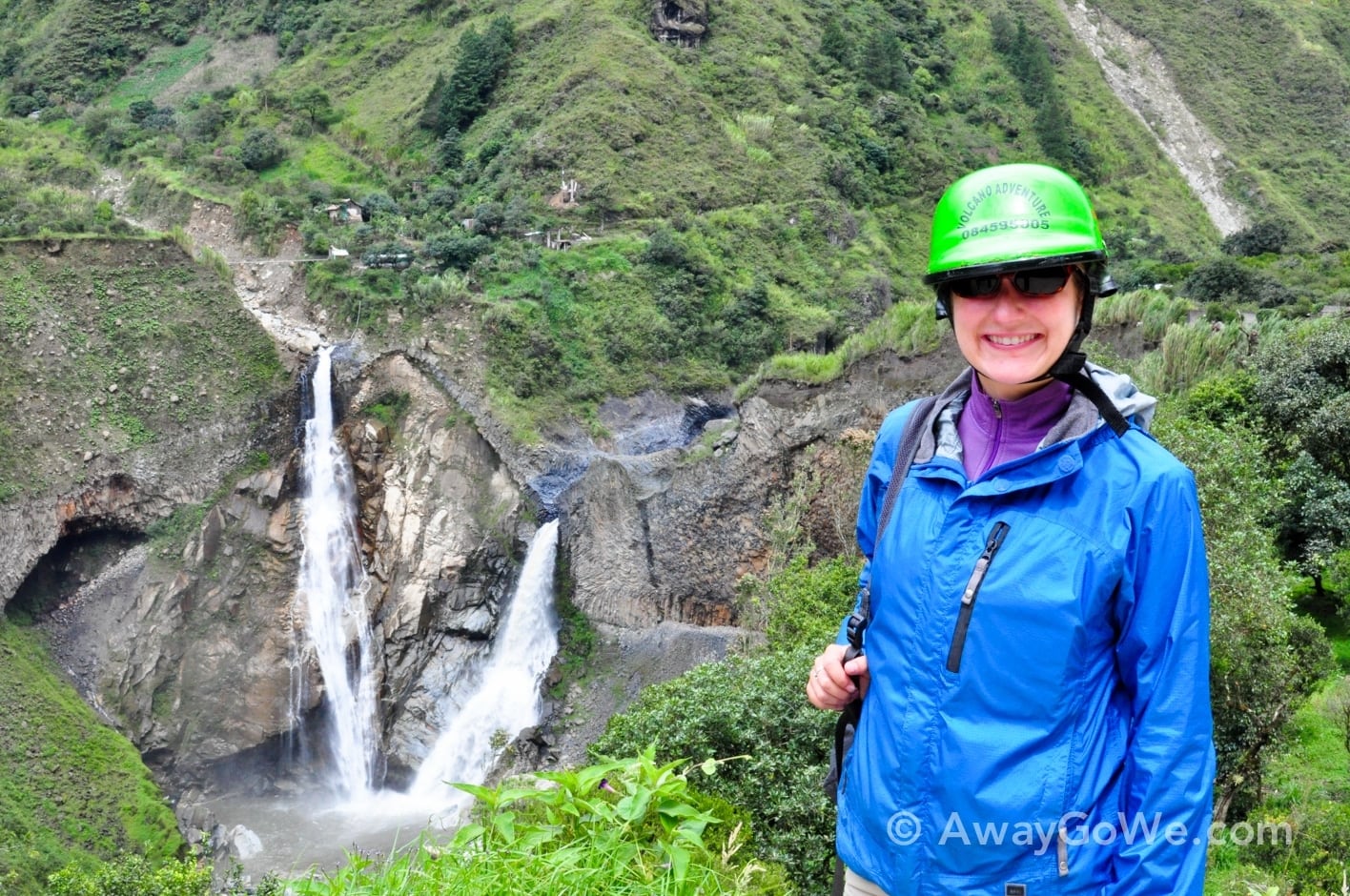 Our first major stop was at Cascada de Agoyan, which has the distinction of providing access to the falls via two rickety tarabitas (cable cars). One tarabita takes you over the river and another takes you down to the base of the falls. We opted for the latter, which ended up being a bit terrifying.

True, an aging metal box rolling along a long set of steel cables didn’t exactly inspire confidence to begin with, but it isn’t until we were firmly latched into the box and moving that three things became immediately apparent: 1) the machine powering the cable car was a diesel monstrosity that looked like a science project, 2) the operator perched atop the belching monstrosity looked to be around 12, 3) we were accelerating downward into a narrow canyon toward a rock wall with no clear sense of how this thing comes to a stop…well, at least a stop in which all passengers exit the death box without the aid of a coroner. 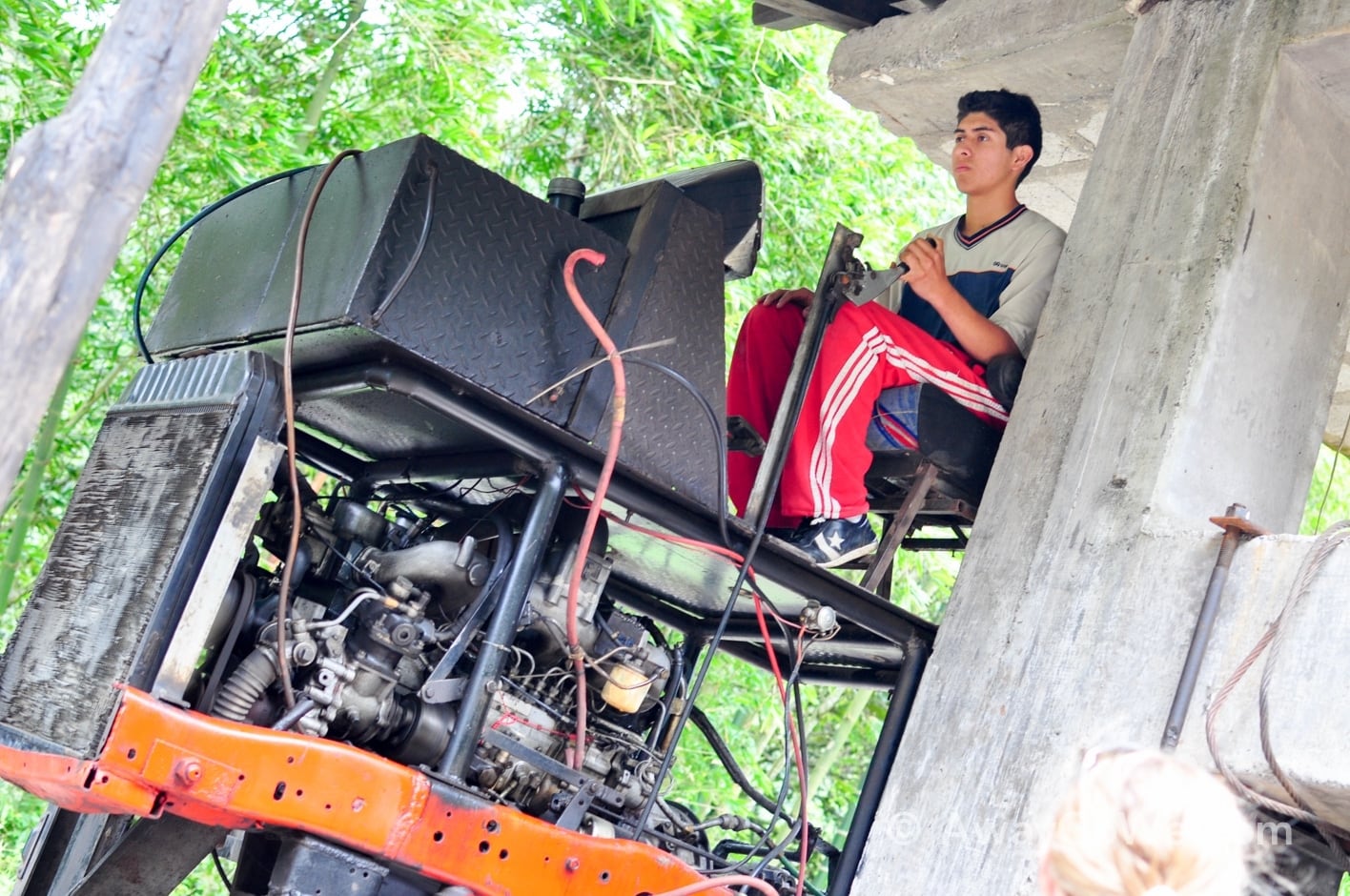 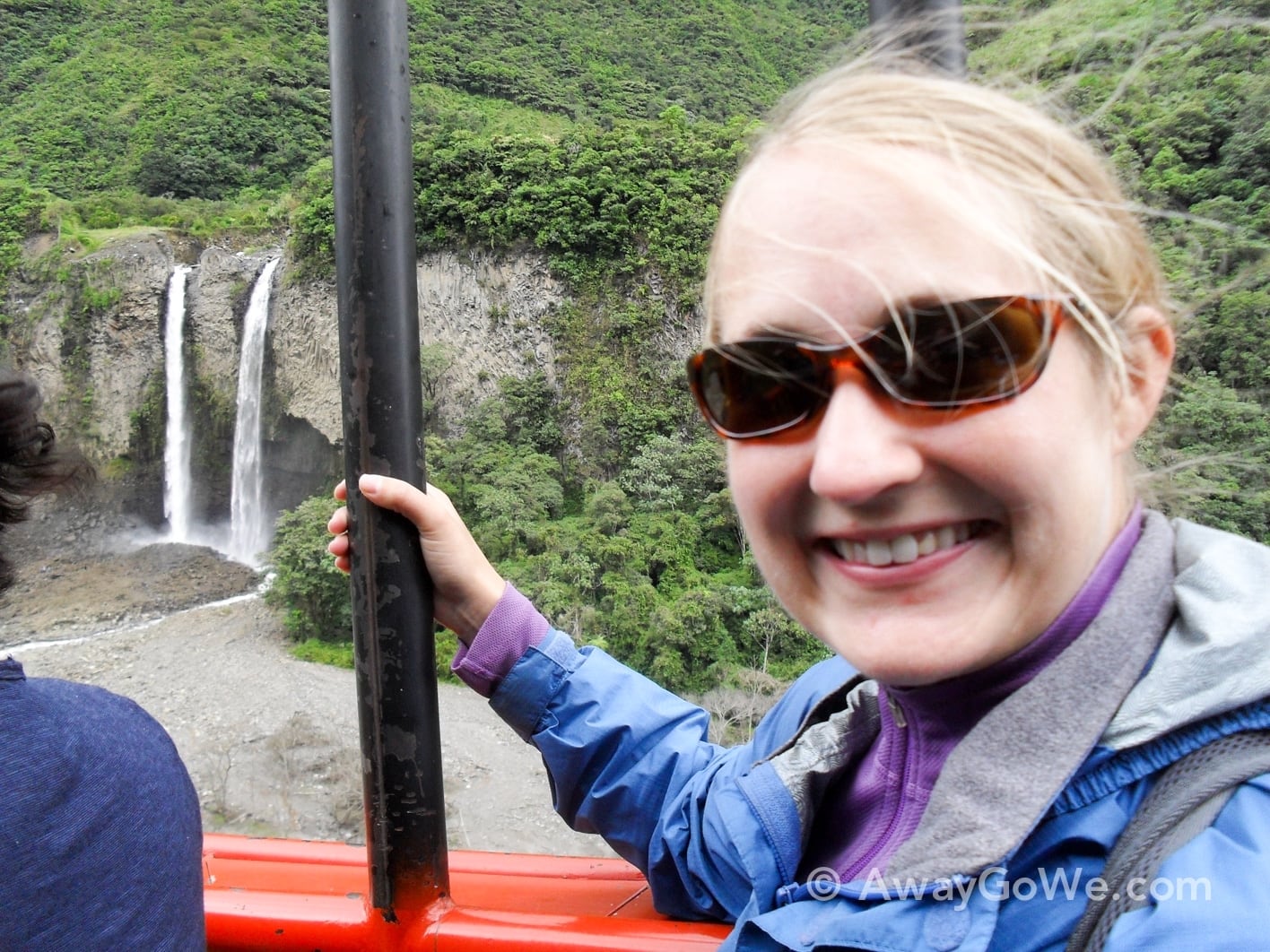 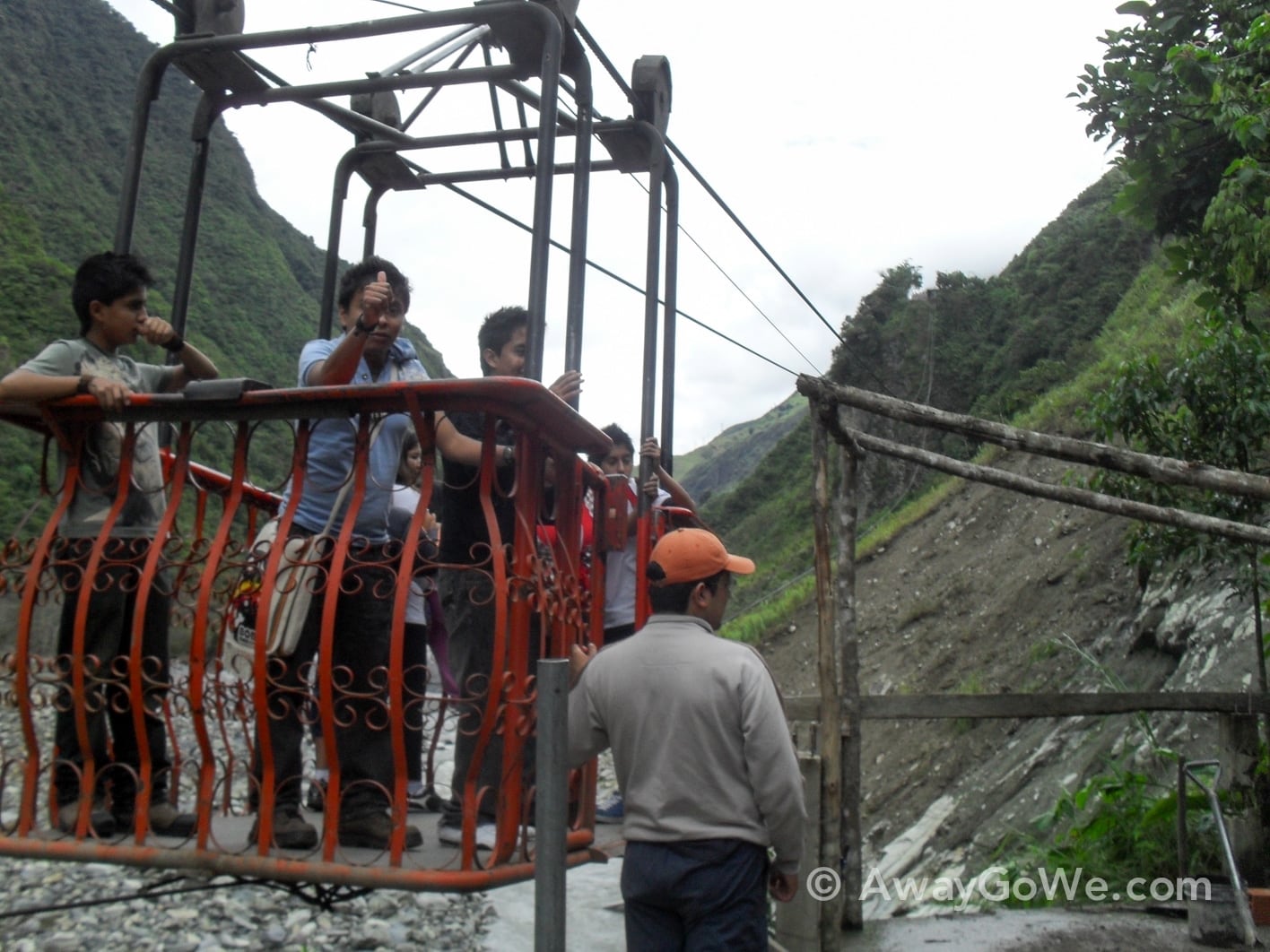 Miraculously, the metal cage did come to a stop that allowed all occupants to exit unassisted, and seconds after leaving the canyon rim high above, we found ourselves on the riverbed. 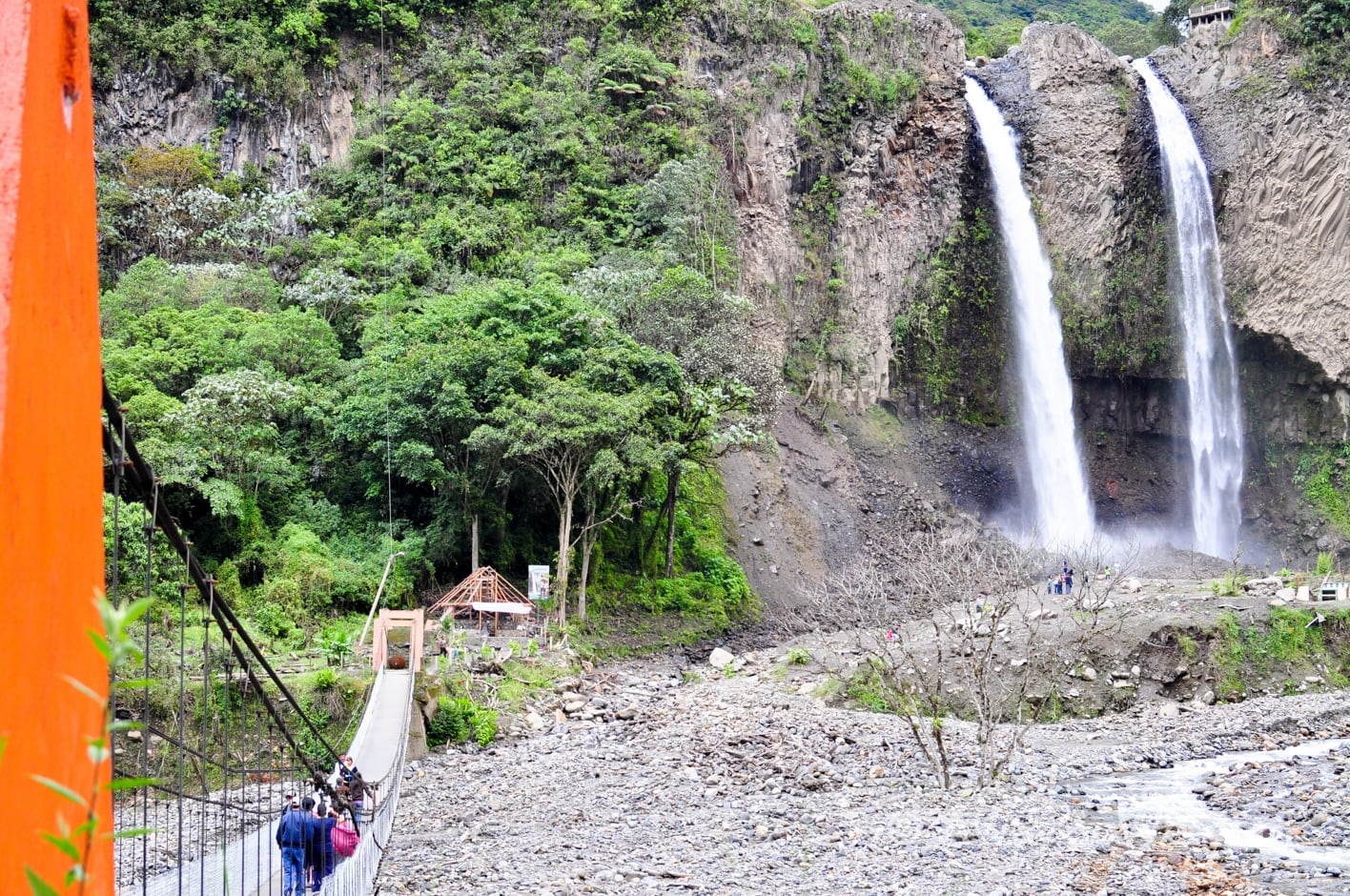 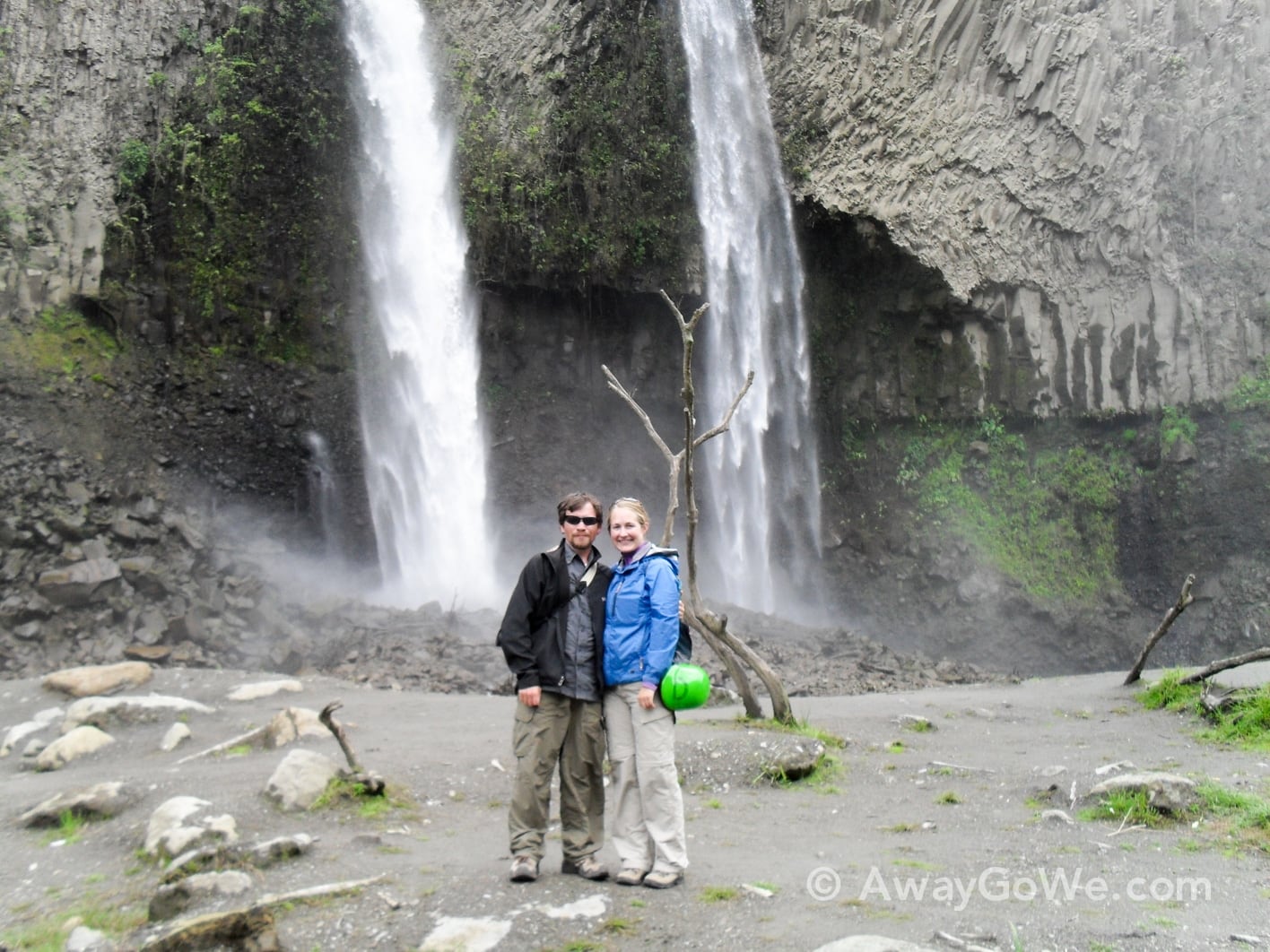 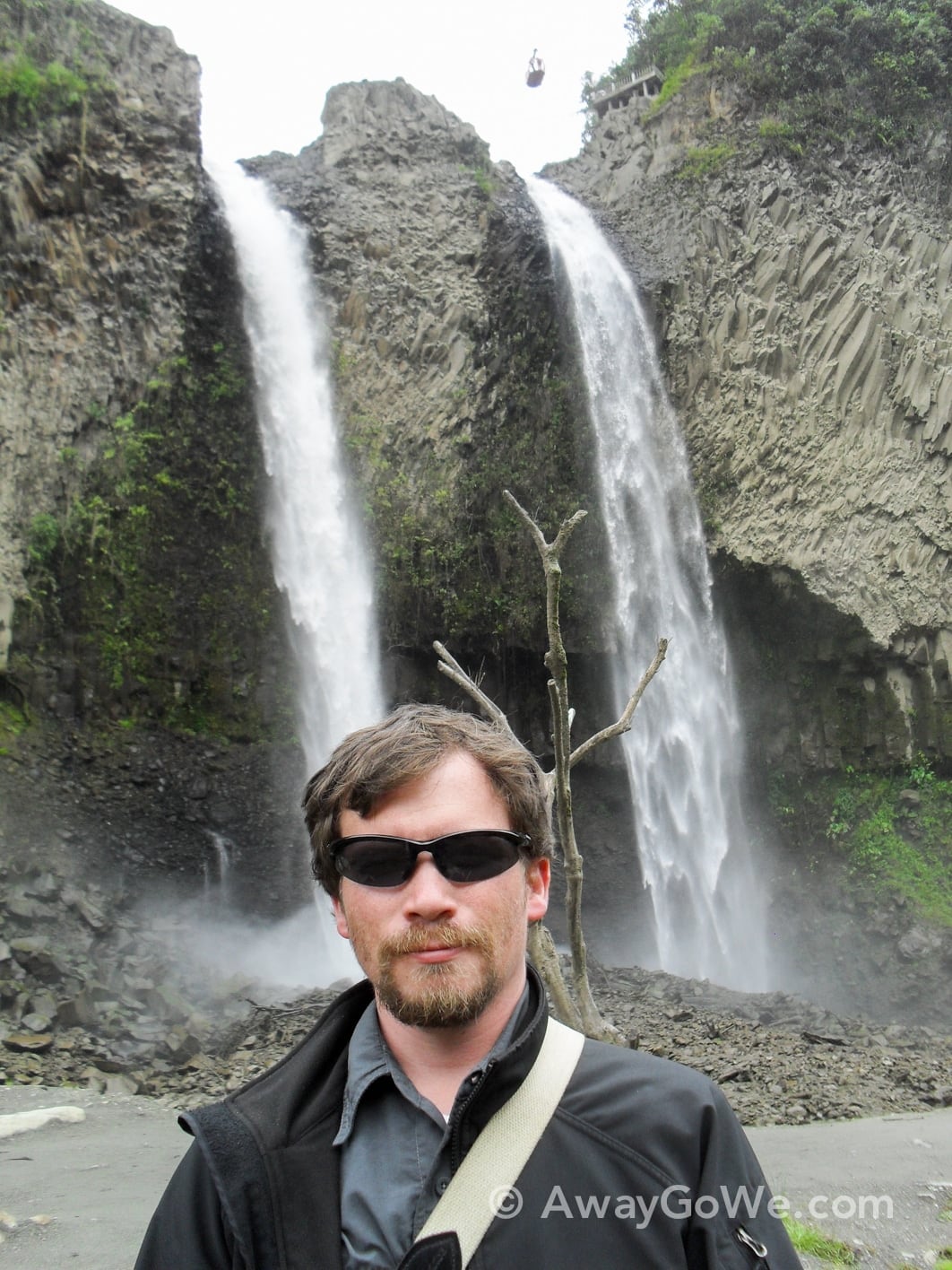 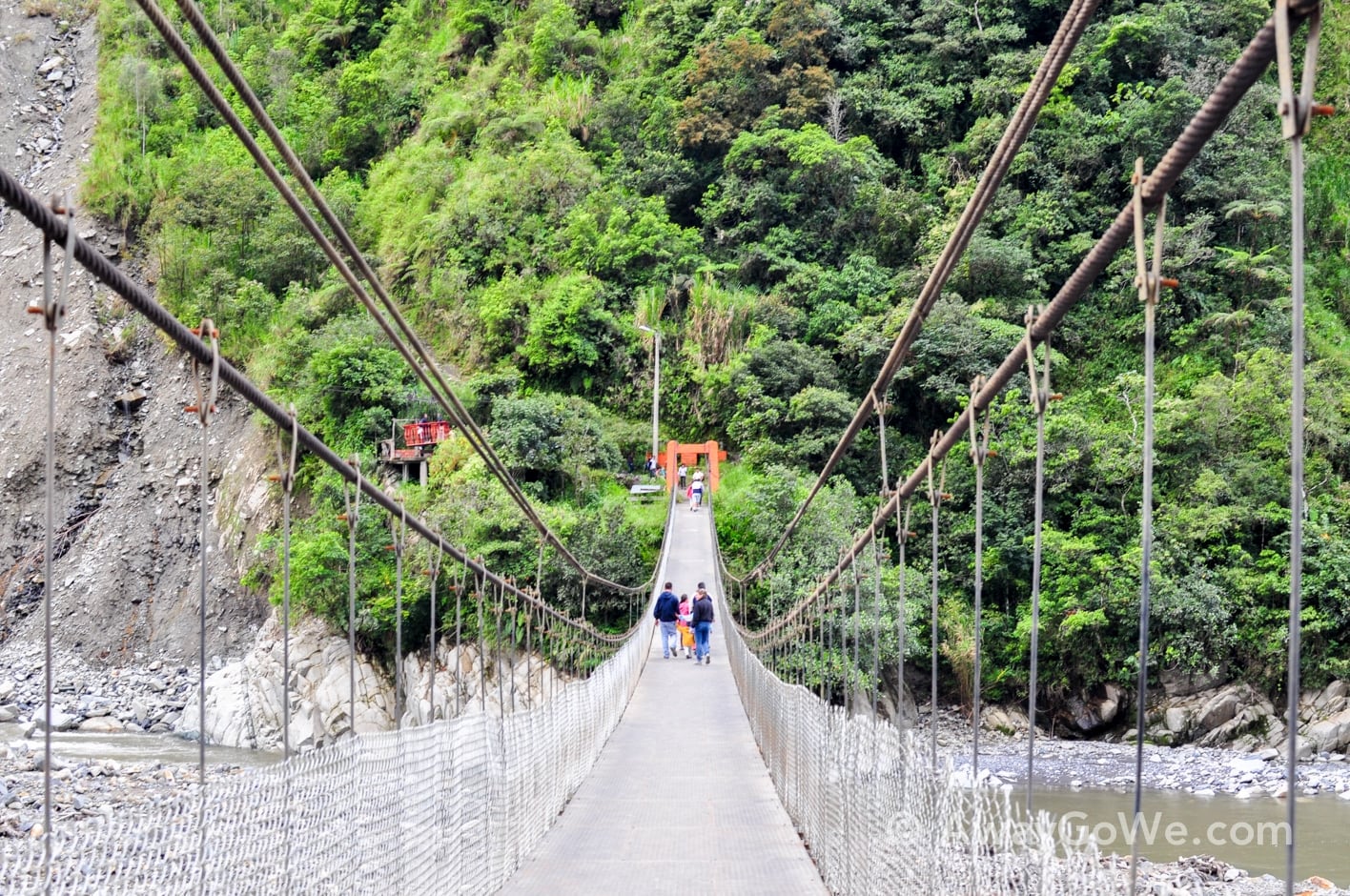 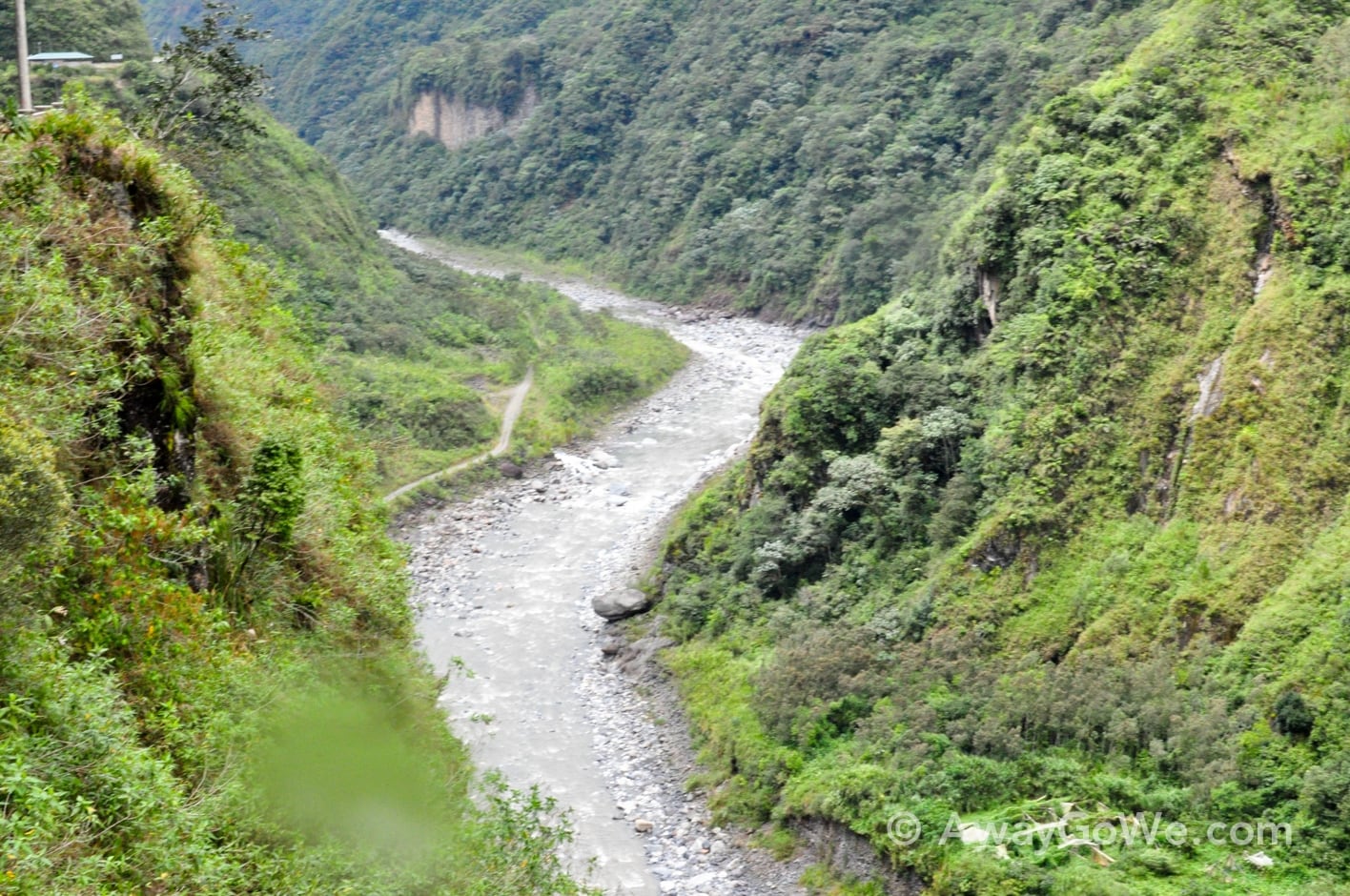 At our next major stop, we followed the well-maintained trail down into the canyon to the Devil’s Whirlpool waterfall (Cascada El Pailon del Diablo). 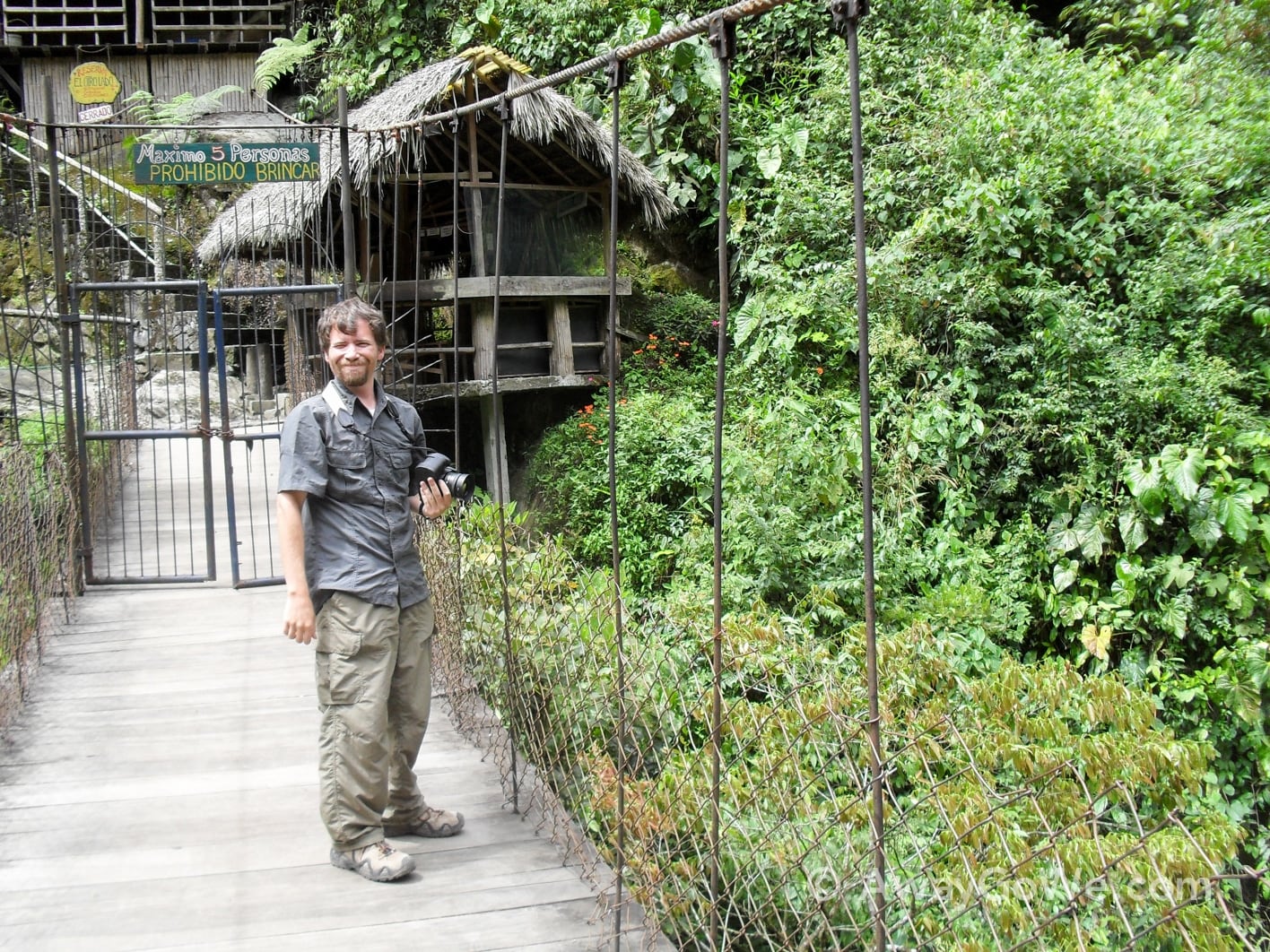 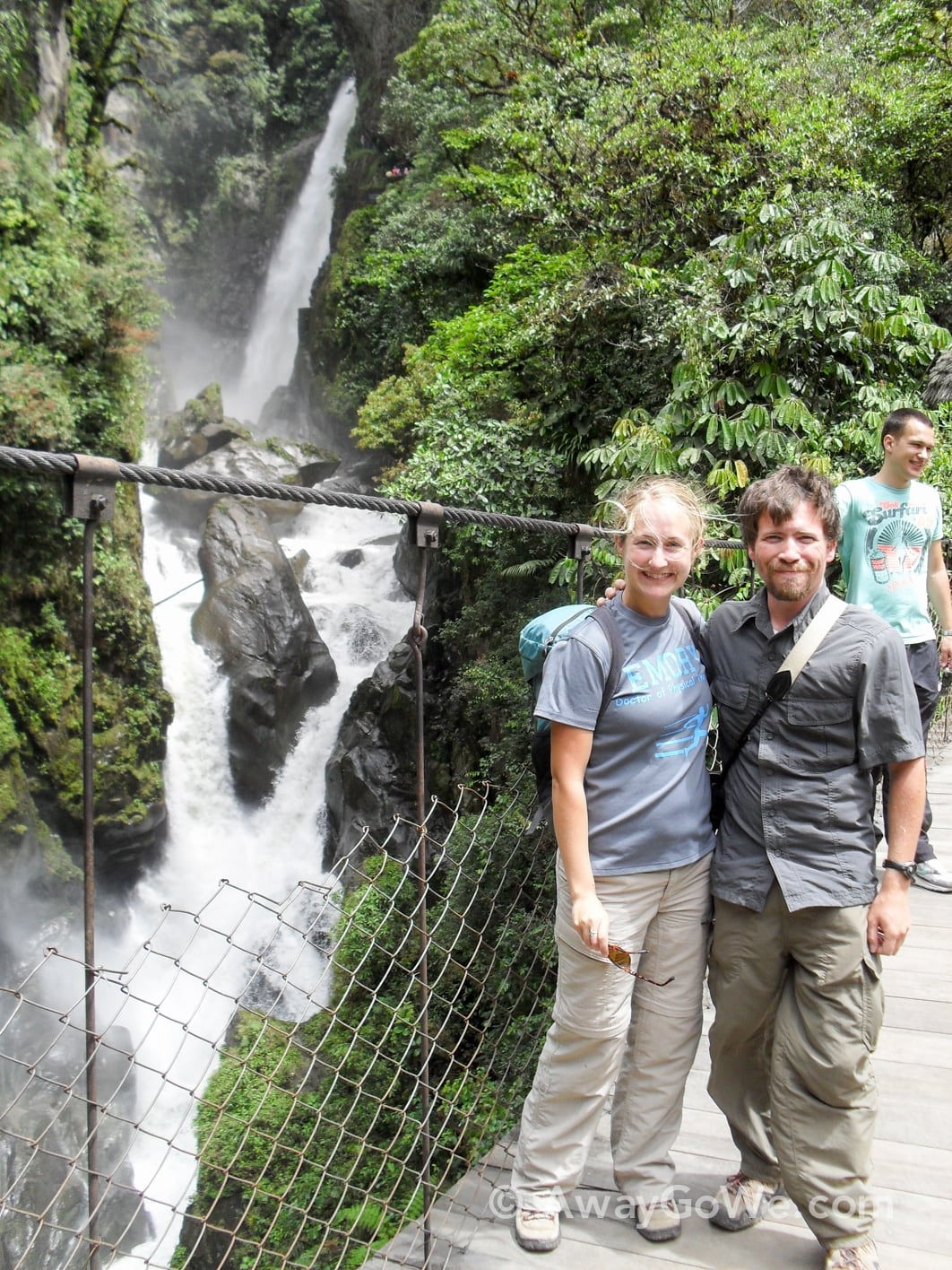 As impressive as the waterfall is, it was once much larger. Most of the water flow was diverted underground in the 1970s to power turbines for electricity. What you see here is what was left after the construction of the hydro-electric plant. Still pretty awesome. 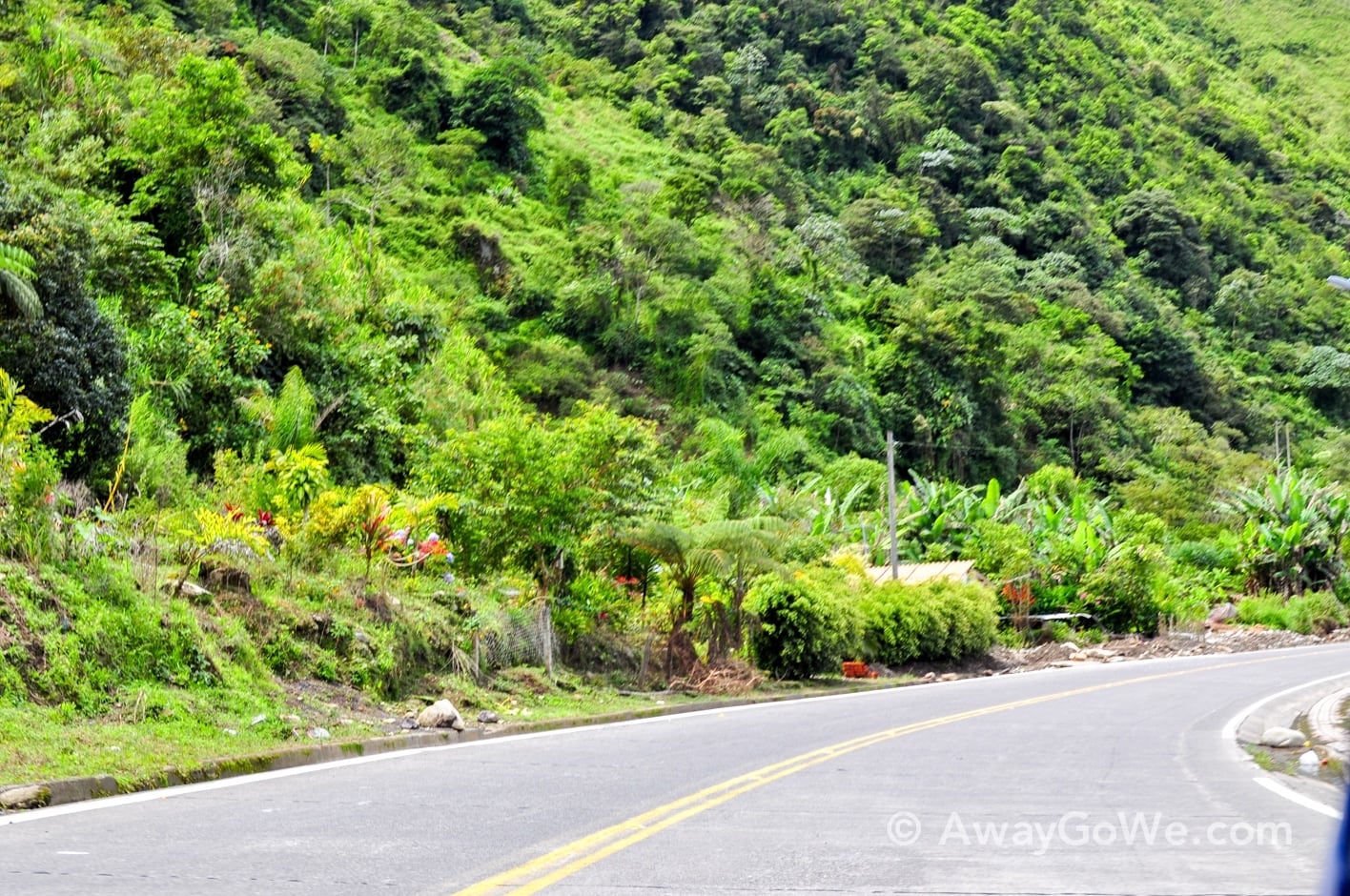 A few more miles down the highway, we stopped to follow the trail to Machay Waterfall (Cascada del Rocio), which was our undisputed favorite of the day. 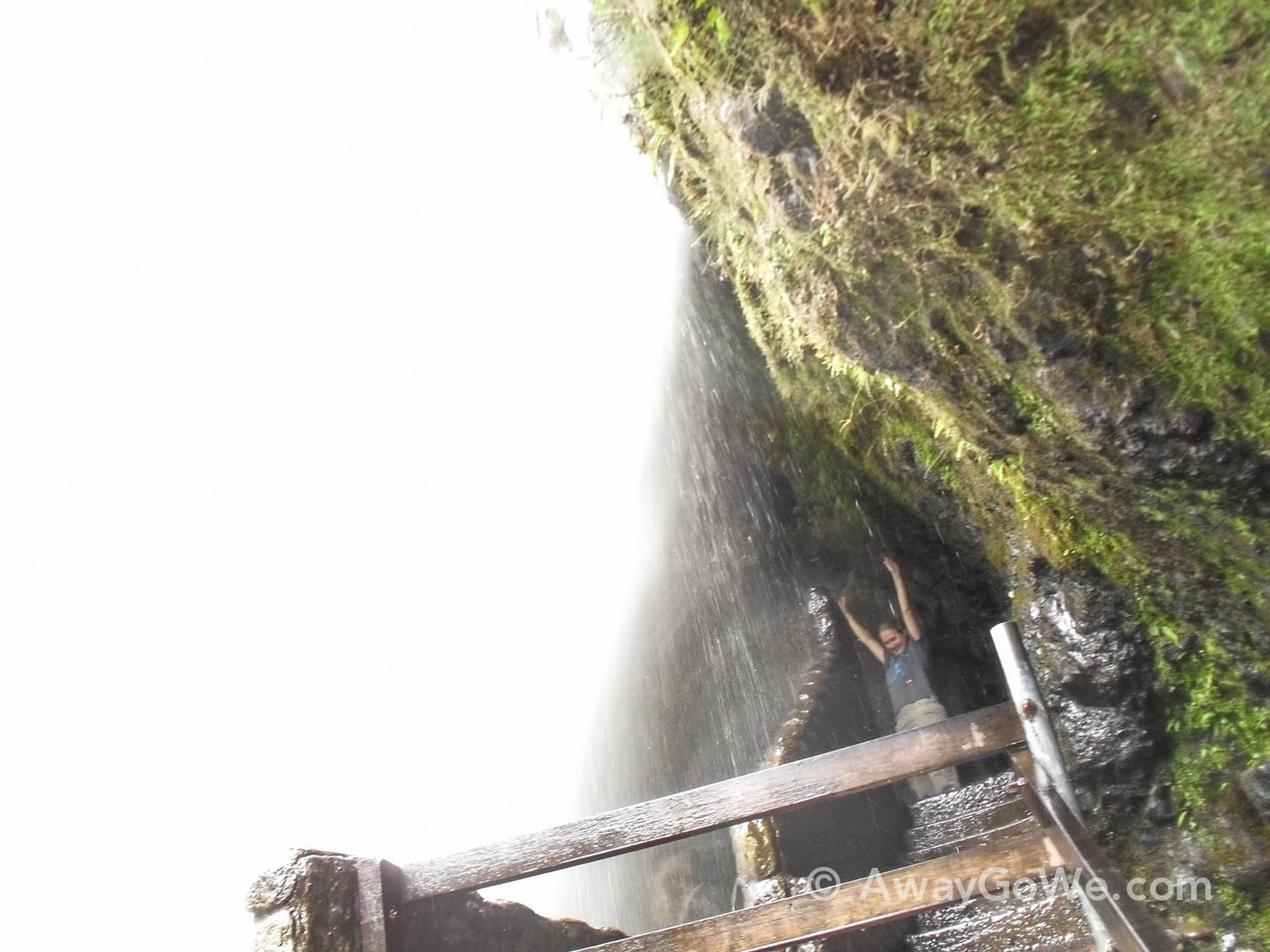 A series of stone and concrete stairs allows you to get up close and personal with the falls, which were near maximum volume during our visit. There was also a series of tunnels that allowed access behind the falls — definitely a blast! 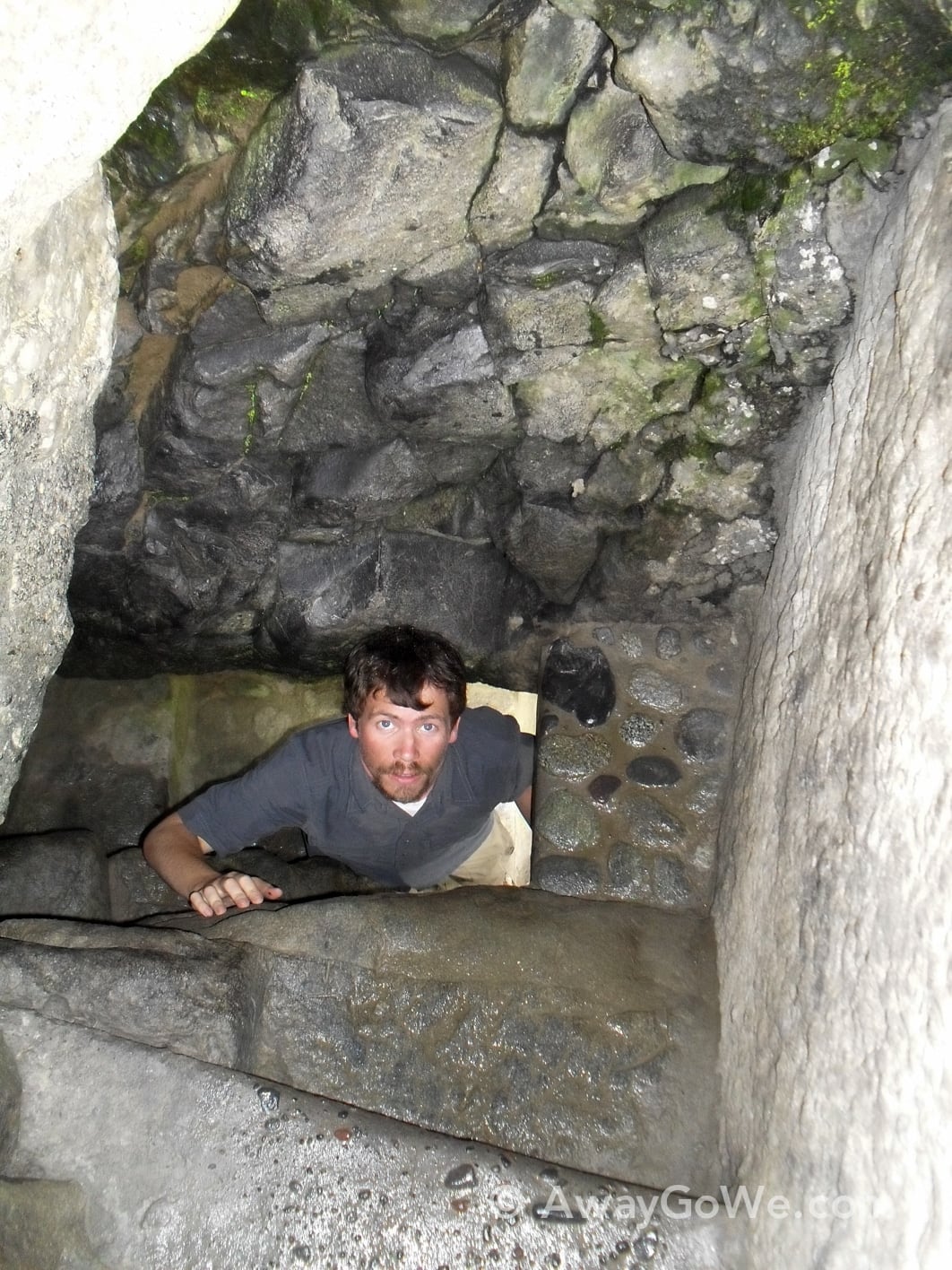 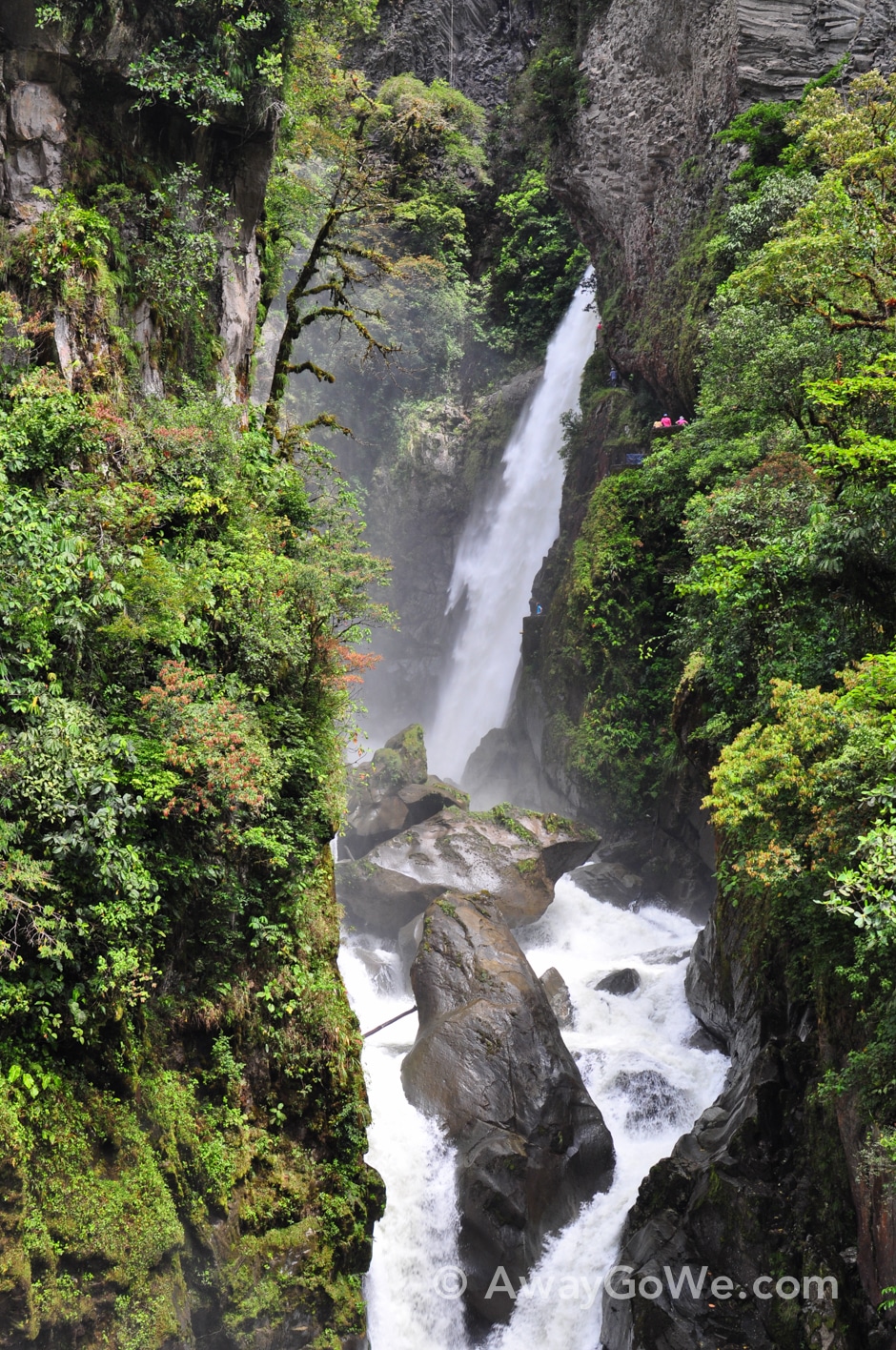 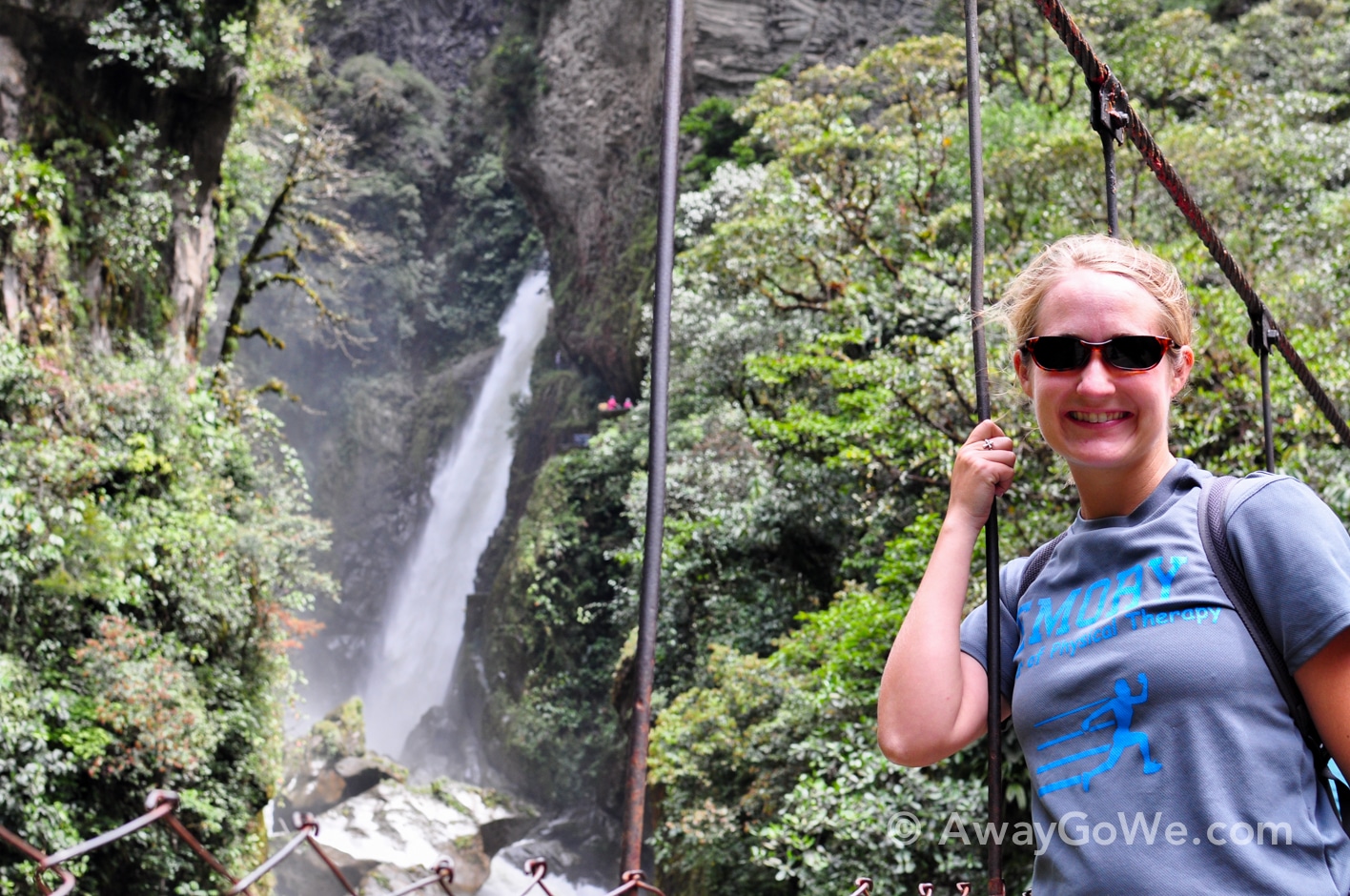 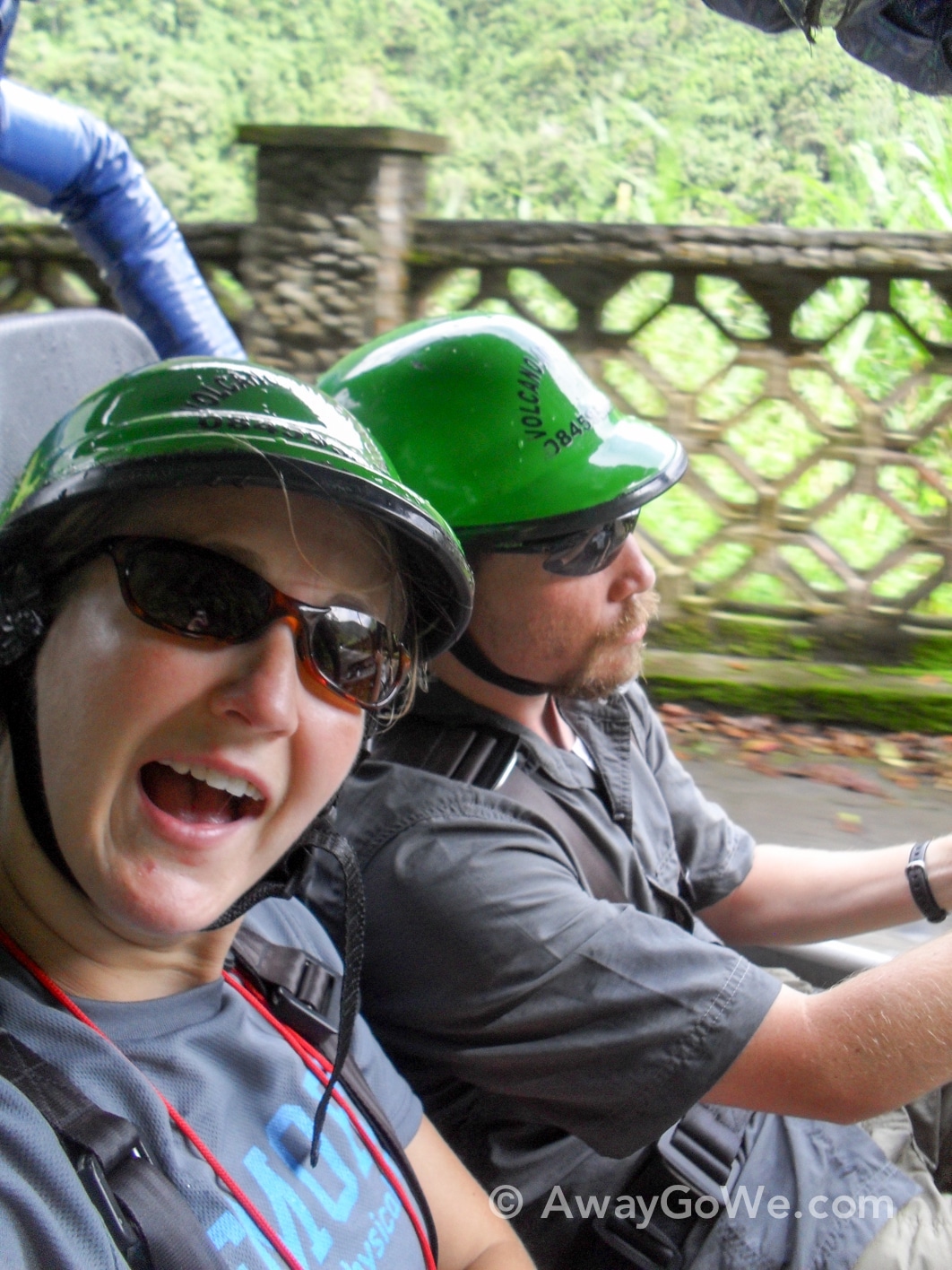 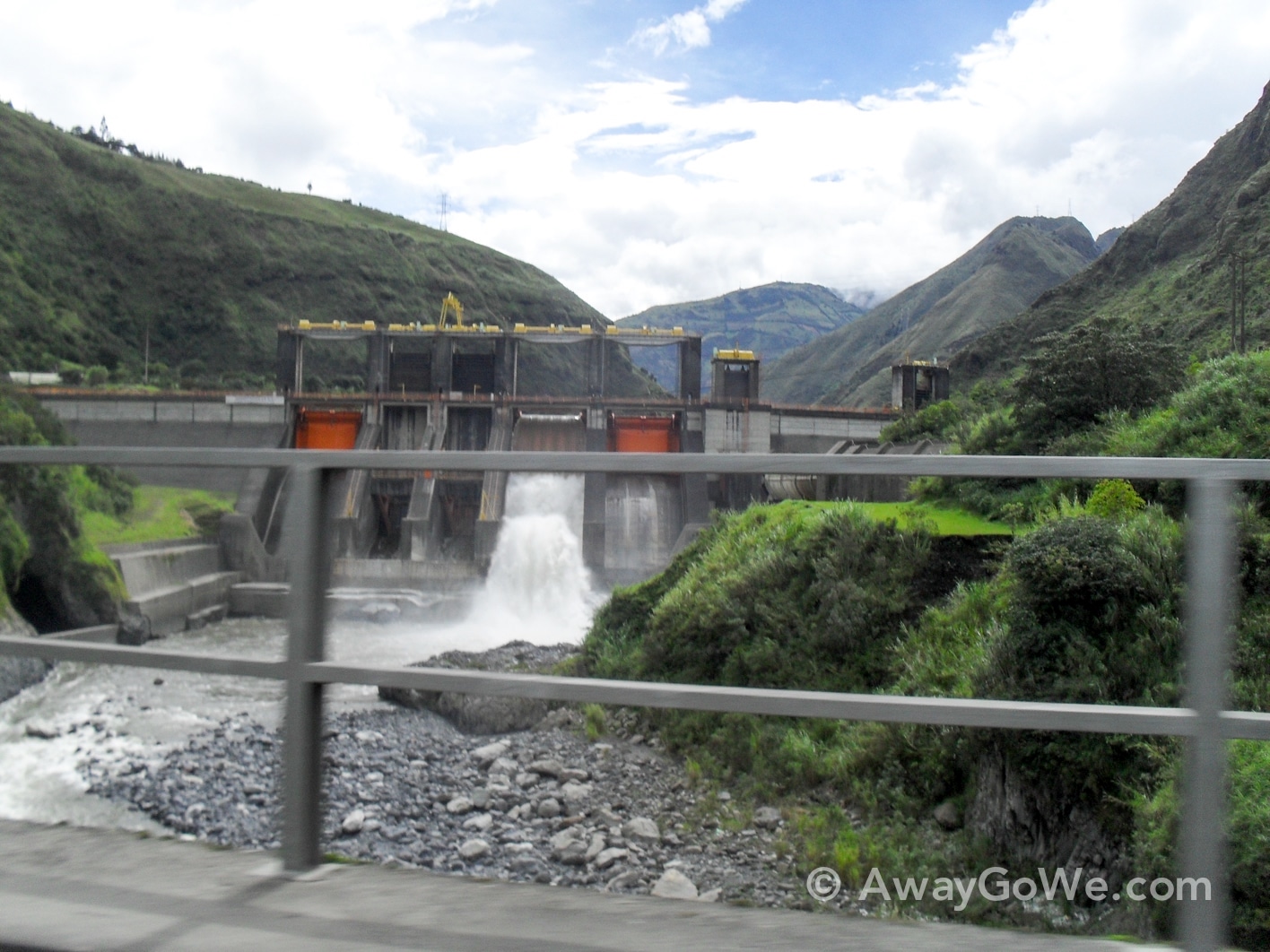 After a long day of waterfall hopping in our zippy dune buggy, we stopped at the famous San Francisco Bridge to watch (but not participate in…at least not this trip) the bridge swingers! Much like bungee jumping, jumpers are tethered to a sort of bungee cable and free fall from a bridge. However, in bridge swinging, the emphasis is more on the swinging than the free fall, as there is only about 80 meters (262 feet) between your head and the rocky river bed here. 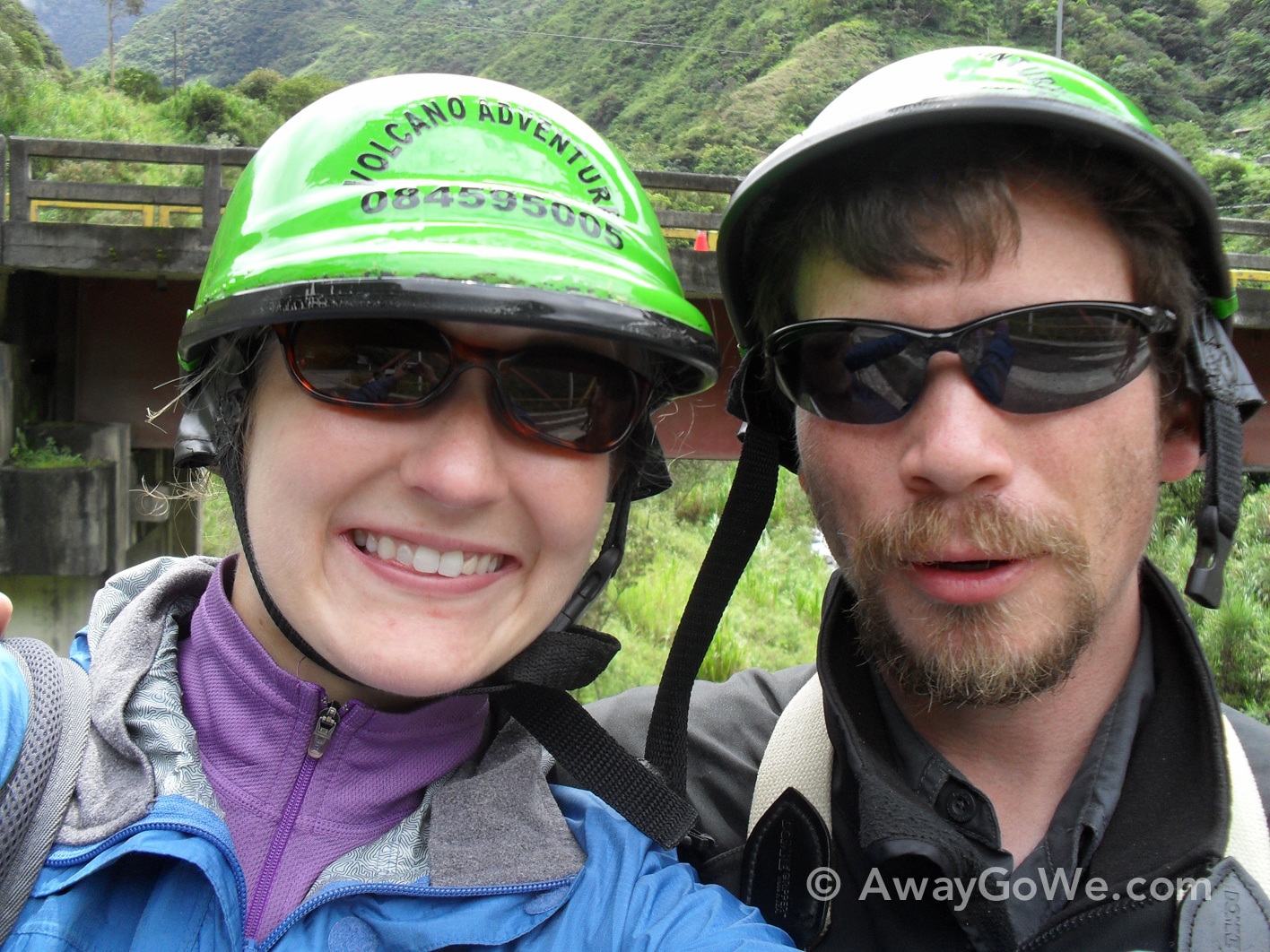 After a long and exciting day of chasing waterfalls up and down the highway, it was time to get the vehicle back before closing!

We we were making good time, when he unthinkable happened…we ran out of gas about a mile from the shop! Without a petrol station in sight, and no functioning phone between the two of us, we did what any couple would do–rock/paper/scissors for who gets to jog into town and notify the company. With minutes to spare until closing, Lori luckily won the dual (I’m not sure I would have made it back so swiftly).

About 20 minutes later, I saw a bright yellow ATV from the same company approaching. It was Lori! Apparently the company told her to come out and get me and to just leave our buggy where it was. And with that, we bid farewell to “Little Blue” and made our way back to Baños. 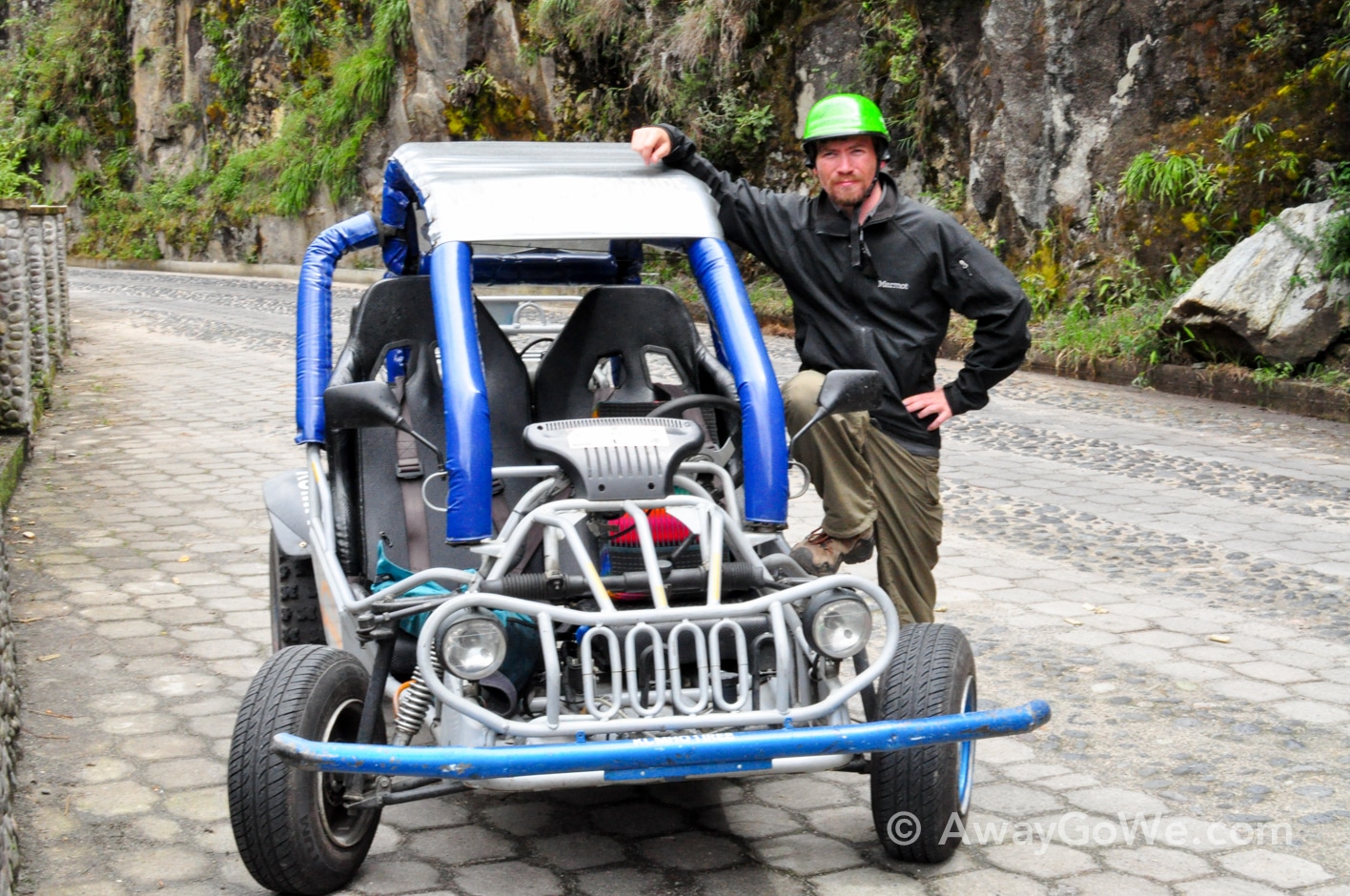 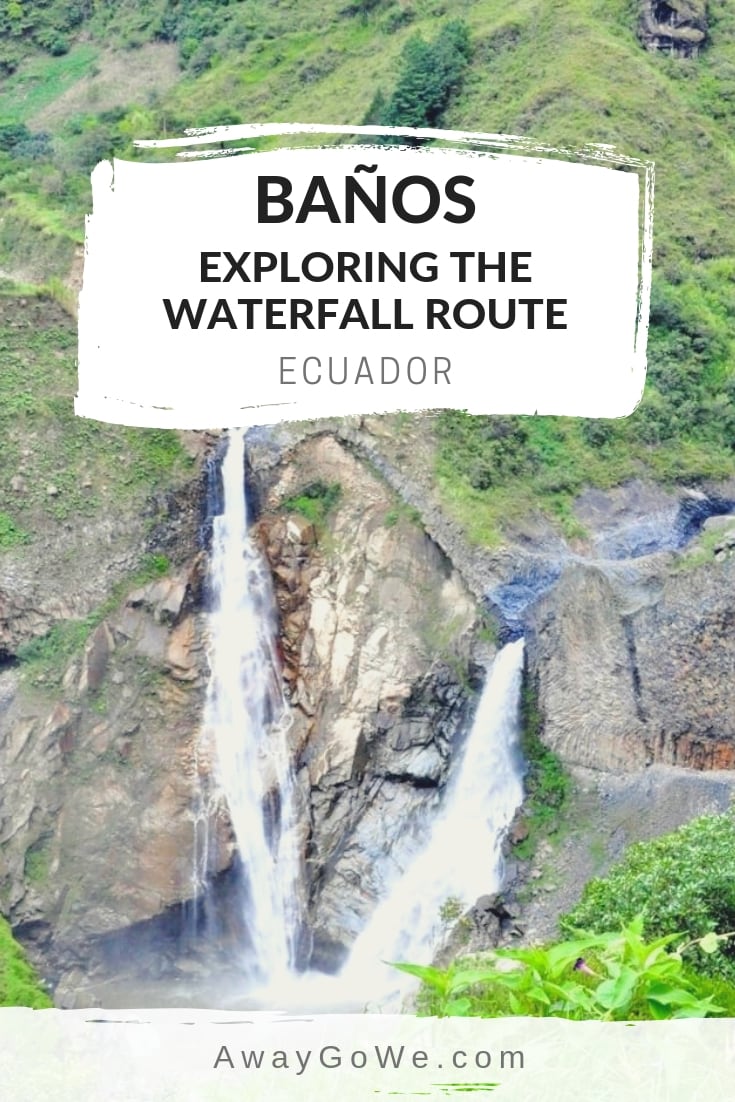