Another breathtaking beach stop along our route, Cintsa may have beat all others which came before it…and if it hadn’t been for the Baz Bus, it would’ve been just about perfect. 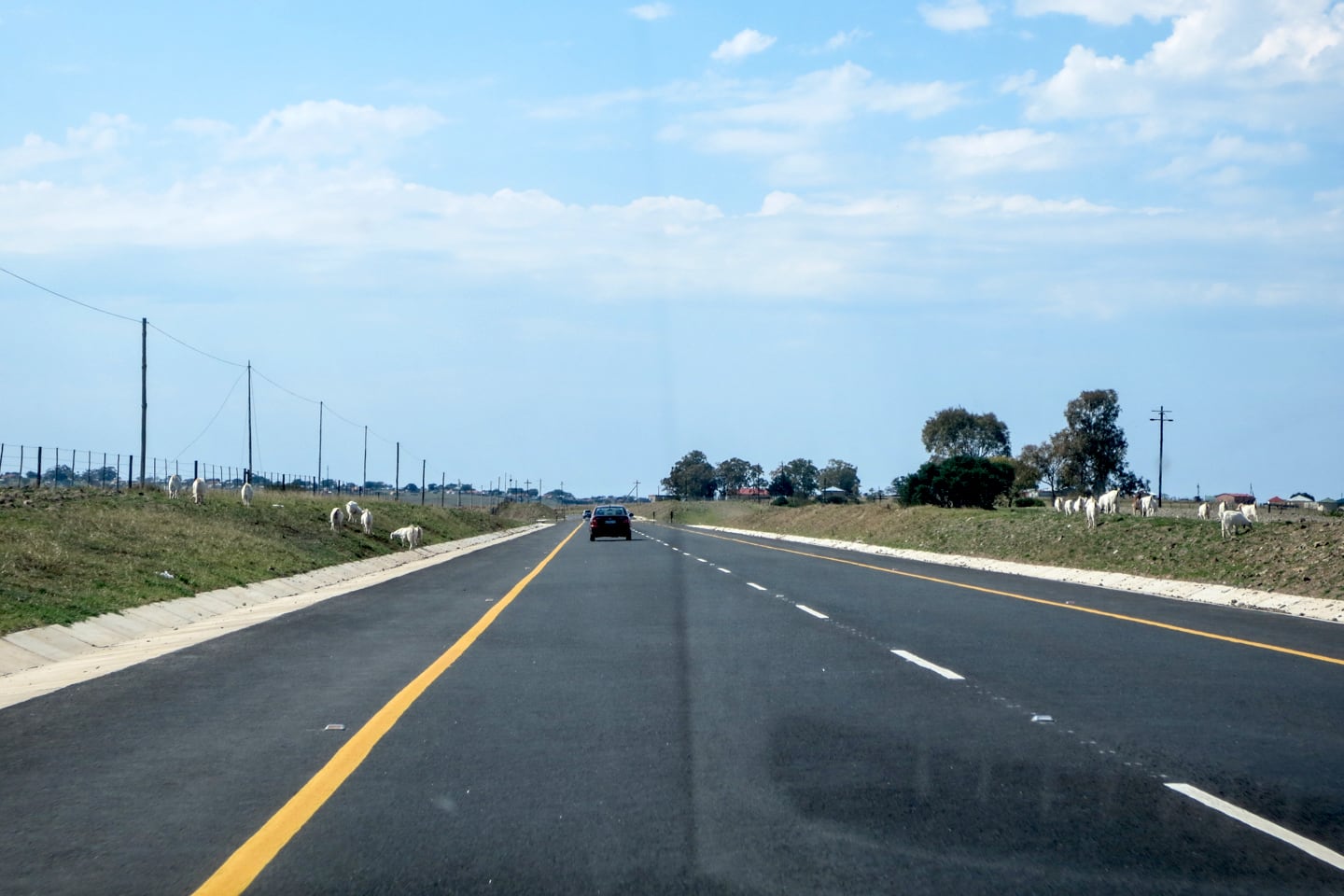 After an exciting day chasing elephants all over Addo Elephant National Park, we’re back on the road again — this time, we’re headed to the Wild Coast! 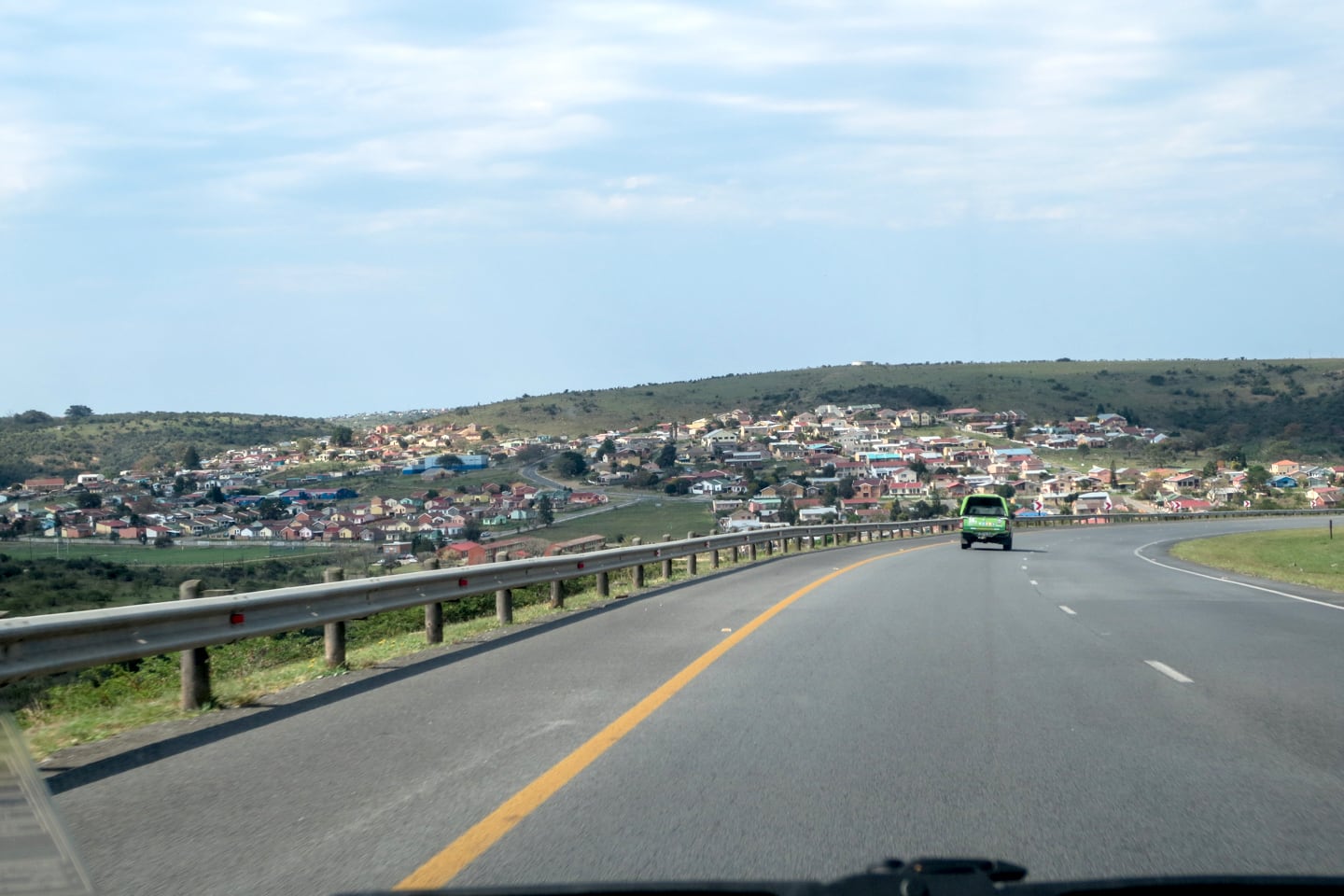 As the “Wild Coast” might imply, we’re leaving the comforts of Western South Africa and entering a less developed and more Bantu (i.e. “African”) region of the country that was once referred to under Apartheid as the Transkei. 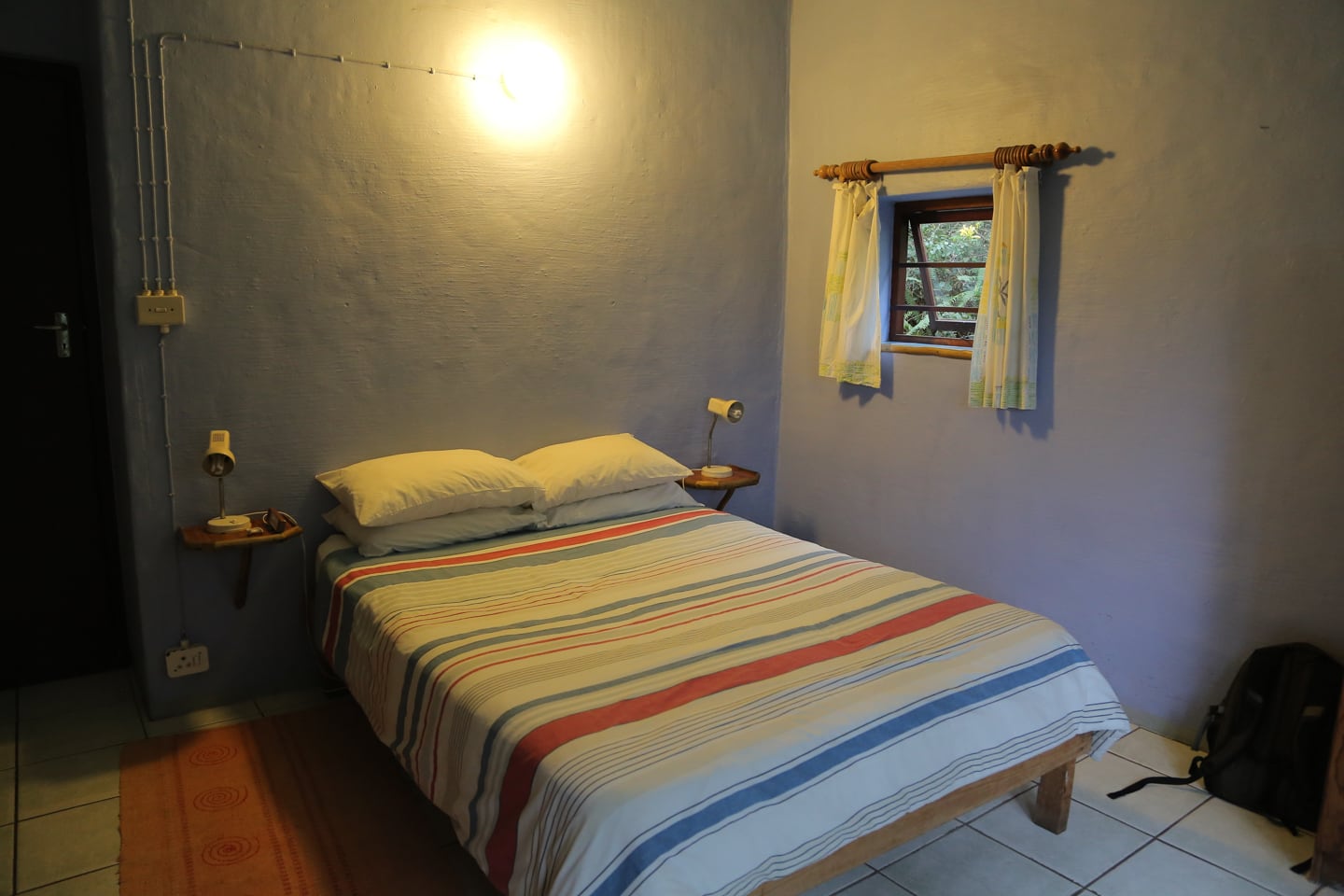 We stayed at Buccaneers Backpackers, located right on a lagoon in West Cintsa that skirts the beach which connects to the more built-up East Cintsa.

The backpackers is mostly comprised of large cottages scattered over a hillside leading down to the lagoon. Our cottage was essentially a three bedroom, two bathroom house with kitchen and front room. We could see that the cottages would be great for families wanting a self-contained, self-catering option for a budget price. On this particular evening, however, most of the cottages were filled with backpackers (one or two to a room), sharing the house, which seemed to work out alright.

The only downside to the whole setup was that, while we had a key to the front door of the cottage, there were no locks on the rooms, which demands a certain element of trust of your fellow cottage-mates. But it all worked out in the end and nobody messed with our stuff as usual. 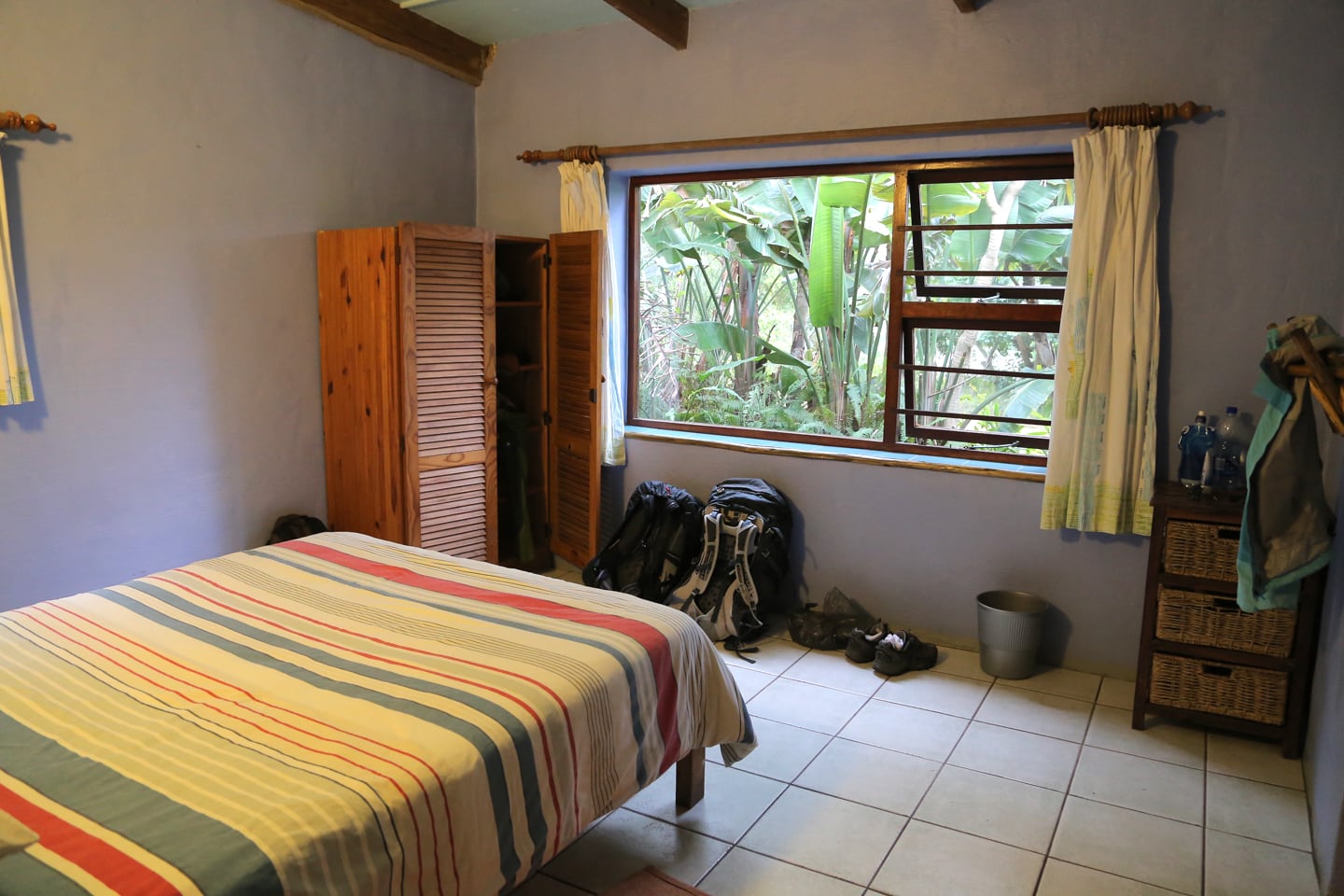 We did not pay the extra for one of the “Lagoon/Sea view” rooms, but were pleasantly surprised that we could see both from our bedroom window, nonetheless. 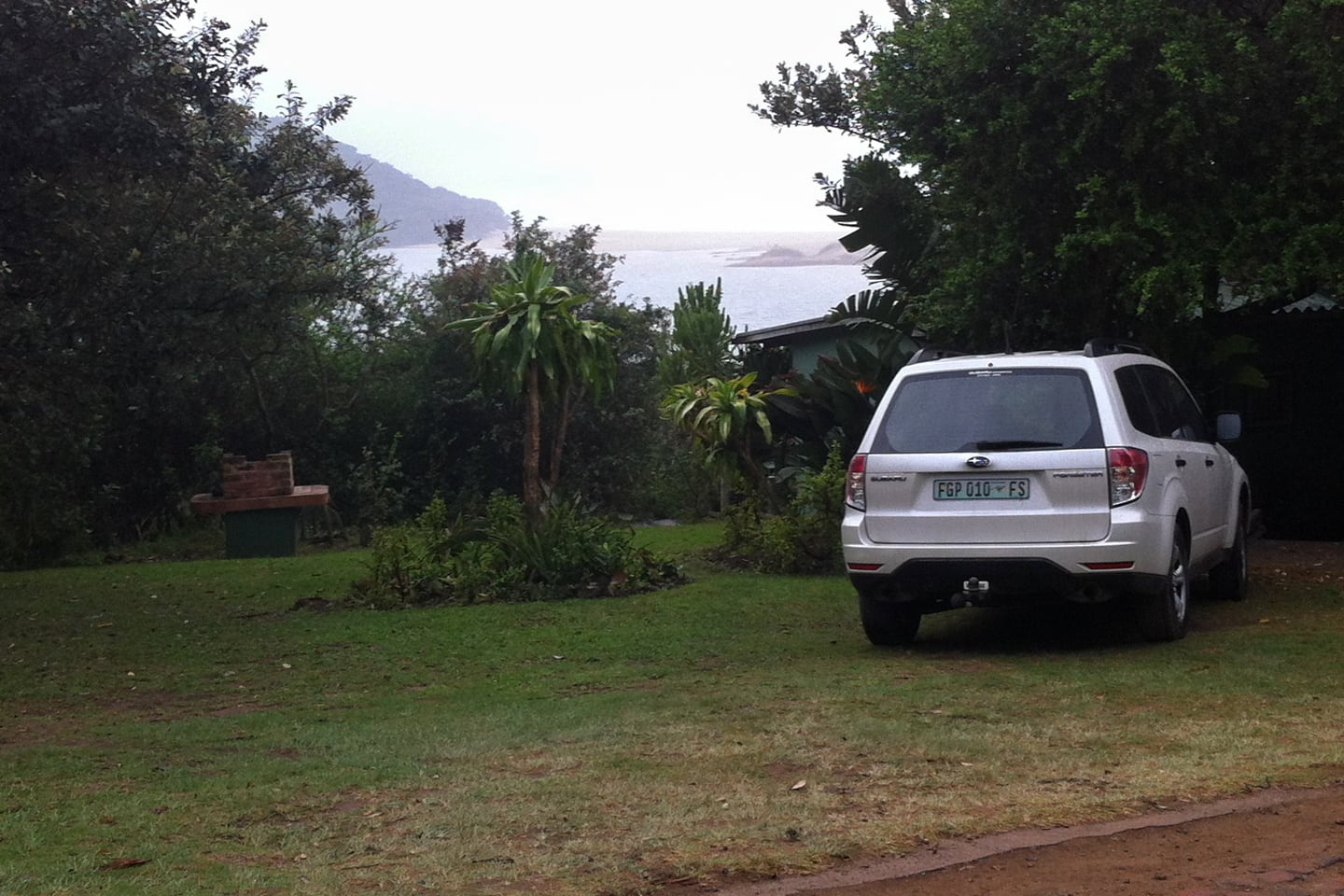 After settling in, we naturally wanted to head down to find the beach, and were glad we did. We stayed in Cintsa two nights, and of those days and nights, the first afternoon in town was by far the warmest and clearest. Great for taking a stroll on the beach (but not quite yet warm enough to go for a swim). 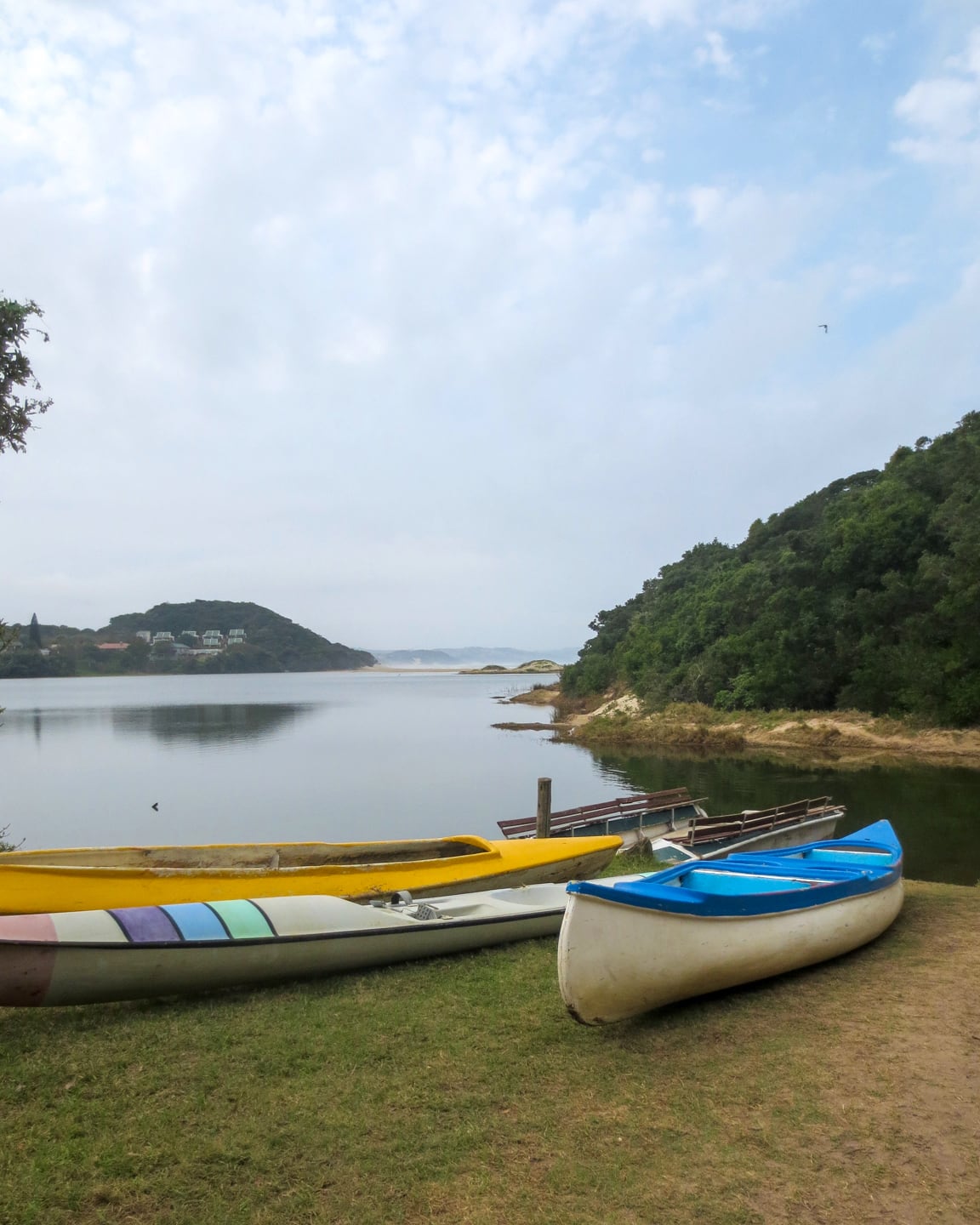 It was a little tricky figuring out how to get to the ocean, however. The lagoon and Indian Ocean nearly connected, but for a 100 meter strip of beach separated the two (and in fact I believe they do connect occasionally during periods of extremely high tide). It seemed fairly straight forward. Just follow the signs to the beach and walk in that general direction til you get there. Not too long after leaving the grounds of Buccaneers, you cross a small wooden bridge and then run right in to a massive bush/tree covered dune, towering in the air.

There was a small trail leading into the thicket, and my first inclination was to follow the trail. However, it kept leading higher and higher and the quality of the trail deteriorated rather quickly.

Back down near the bridge, there seemed to be a trail leading to the left, along the lagoon, but that trail also seemed to run out at the water’s edge, then, a few dozen meters later, re-emerge from the lagoon on the other side of a small bay. This was obviously the trail, but would require using an approach we had not anticipated. But the waters of the lagoon were clear and warm and we were headed to the beach after all. Off with the sandals and on to the beach! 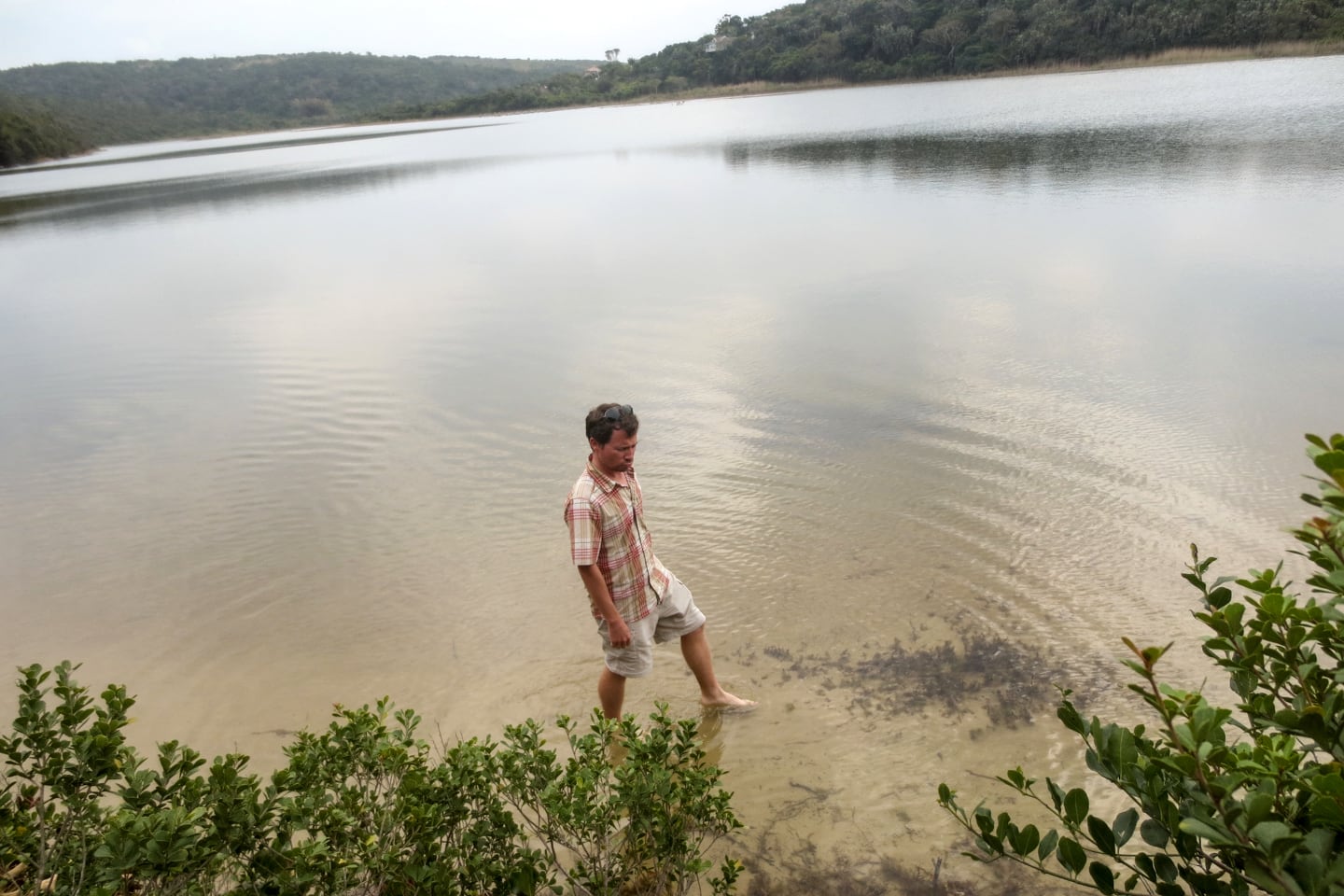 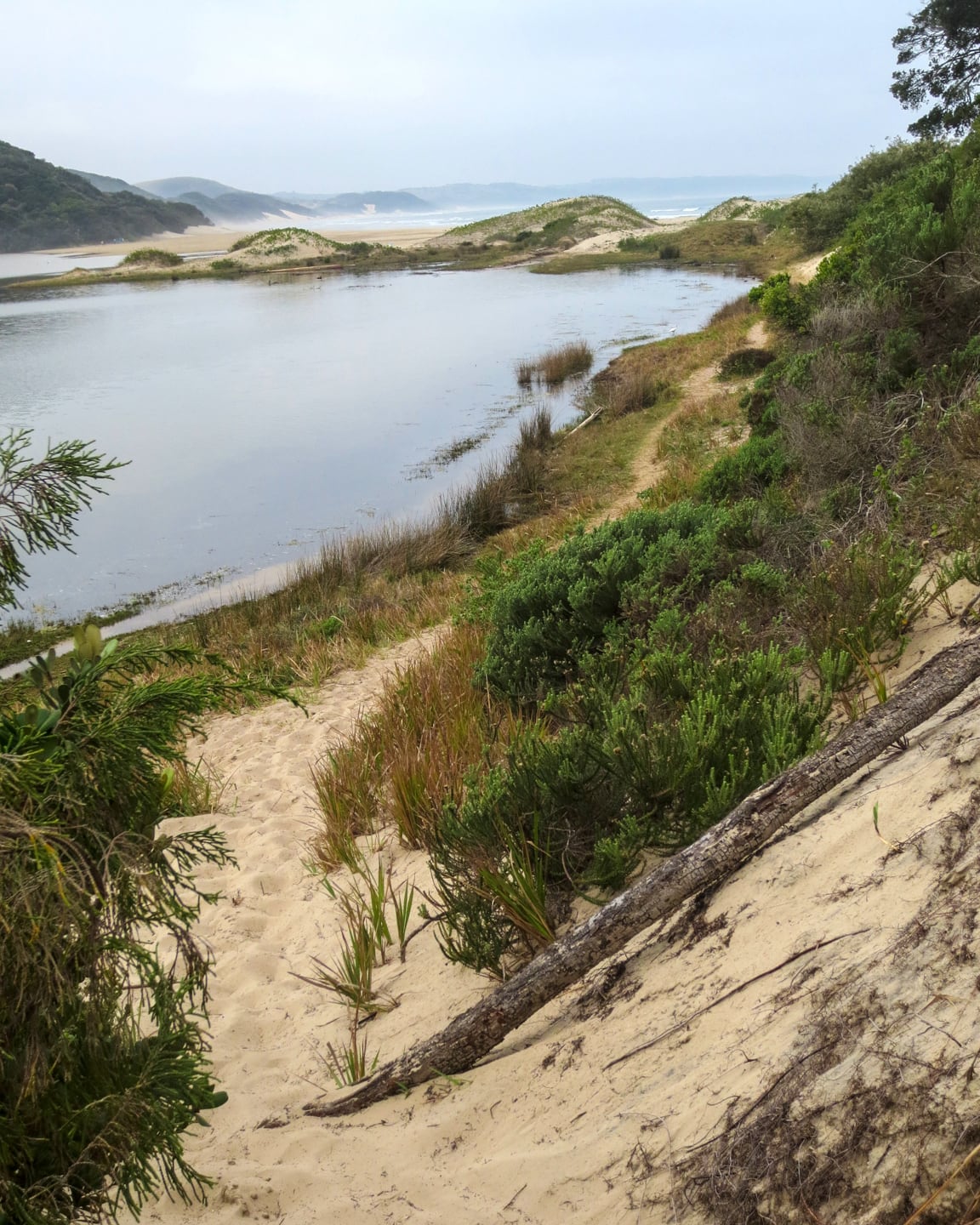 Other parts of the trail offered a high-road option in which you could bypass the flooded trail by climbing up and over a part of the dune.

It wasn’t as easy or straightforward as we thought it might be to access the beach from the backpackers, but well worth the trip. The beach is beautiful — a long, wide swatch of fine sand watched over by high dunes and cliffs. Once down on the beach, you can take a stroll, dip your feet in the water (or take a swim, if you’re practicing for the Polar Bear club) or head over to Cintsa East where you can access the only bar and restaurant in town (though you needn’t fear, Buccaneers has also got excellent food and a full service bar at the lodge).

Check Out These Unforgettable Experiences Near Port Elizabeth 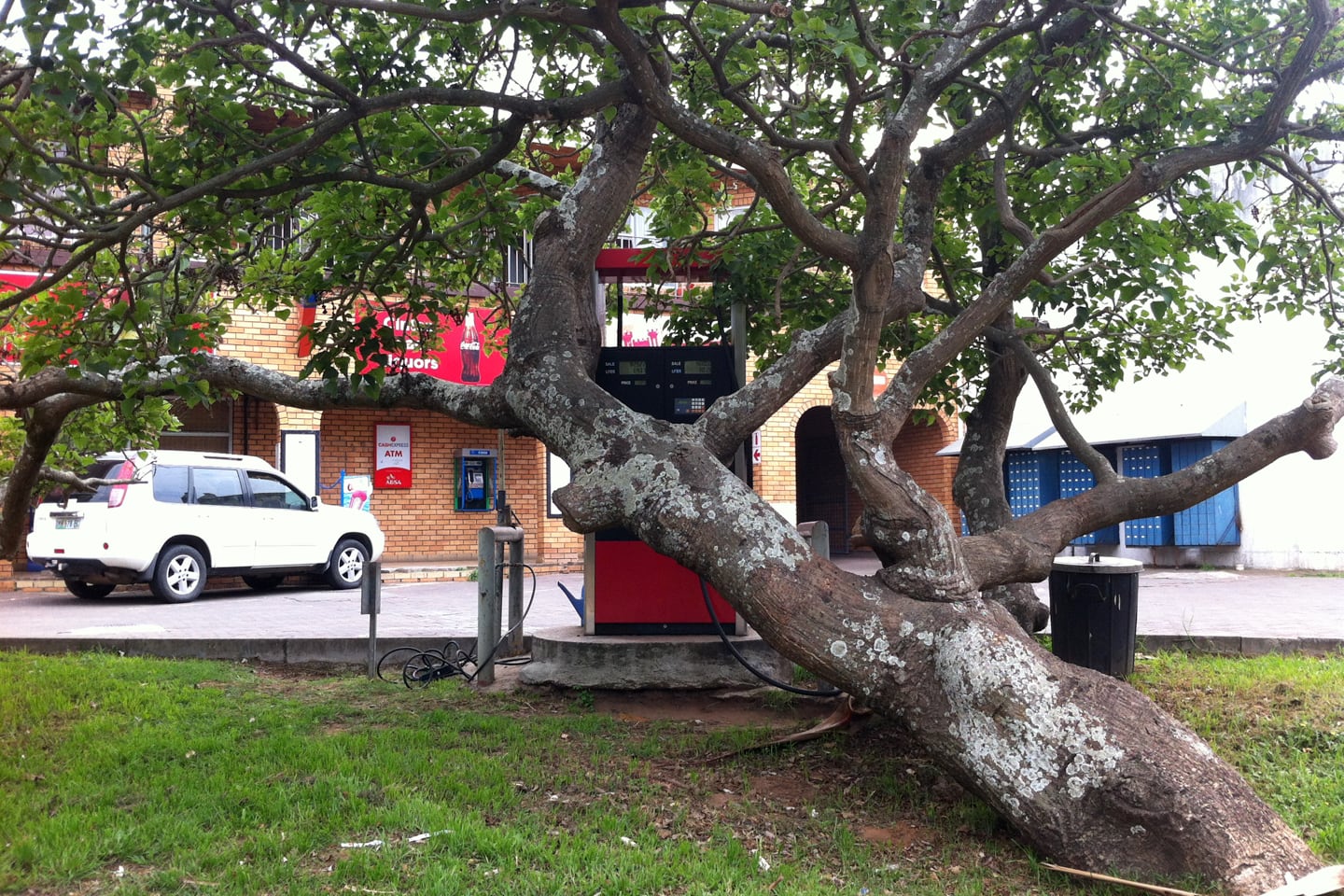 We did visit Cintsa East to have a look around at one point. It was much more built up than we thought it would be (not as much as Wilderness, but more than Coffee Bay). We enjoyed the gas pump in the middle of town appearing as if to be growing out of a tree (or vice versa). You might have to squint, but it’s back in there somewhere. 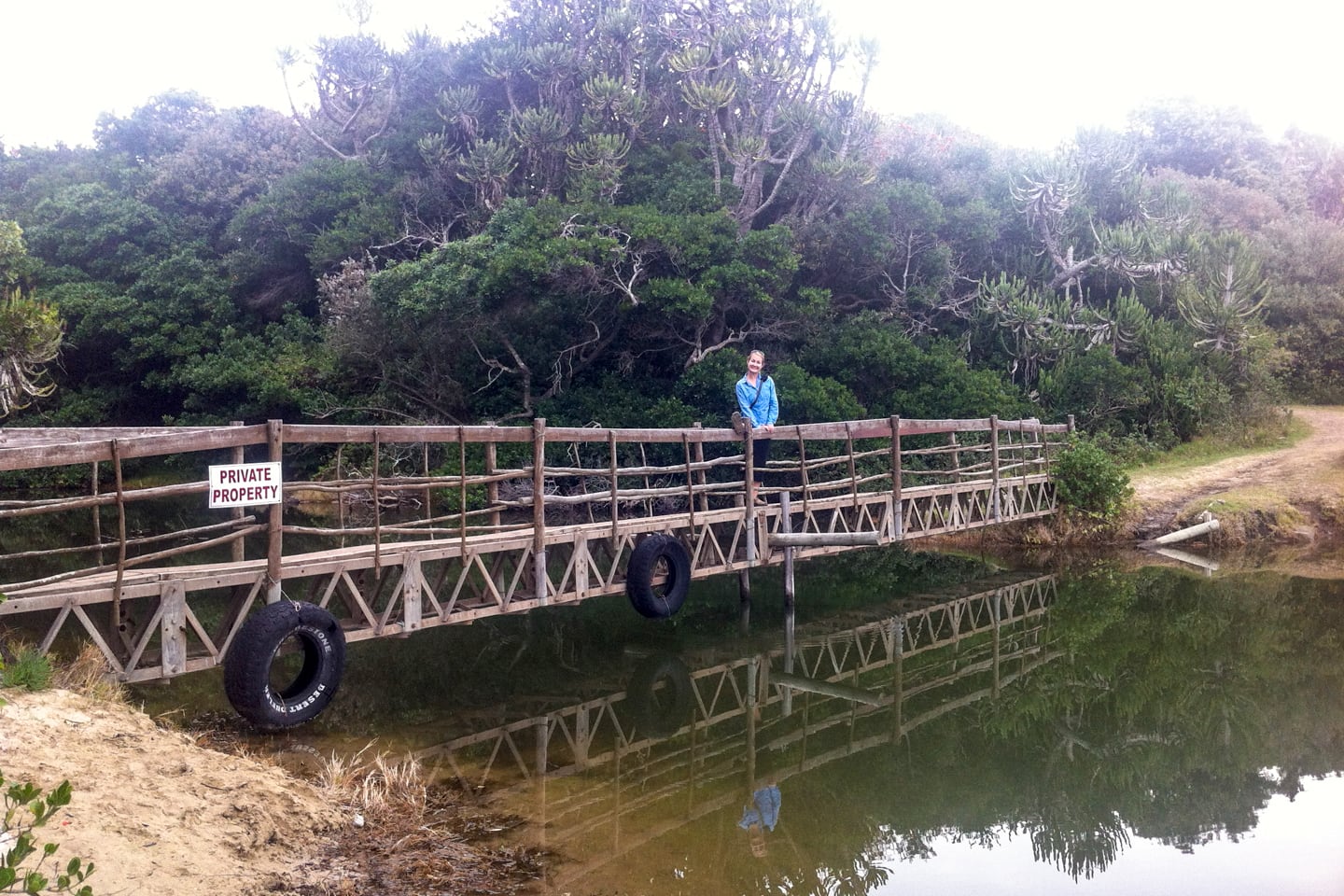 We spent our intervening full day in Cintsa catching up on some much needed relaxation time in which for the first time in a long time we did a whole lotta nothin’.

At this point in our trip we were also tiring of staying at backpackers (i.e. hostels). In South Africa, backpackers are generally the only real budget option. In other parts of the world, this isn’t necessarily true, as you can often spend a little more for a guesthouse/ pension/ pensao, which cuts out the party scene and gets you a few more amenities, which in our eyes are worth the extra dollar or two.

Unfortunately, these types of accommodation really don’t exist in the U.S. In the U.S., if you want budget, you either have to camp or stay in a seedy motel in an undesirable part of town. It’s really sad, actually. For those who just want a place to lay their heads at night in the States for a reasonable rate, they generally have to forgo safety and cleanliness, in addition to comfort, in order to do so. What does $35/night get you in the States? Can you even get a rundown motel room or youth hostel bed for that cheap anymore?

I’ll tell you what $35/night gets you in South Africa: A comfy, clean and secure basic room with a clean towel, free parking, friendly English-speaking staff and access to kitchen facilities. It probably won’t get you a pool, TV or free internet (though we’ve had those here for that price), and you may not have the bathroom in your room (though some of our $40 rooms have been en suite), but, hey, for a clean, cozy place to lay your head for a reasonable price, that’s alright with us. 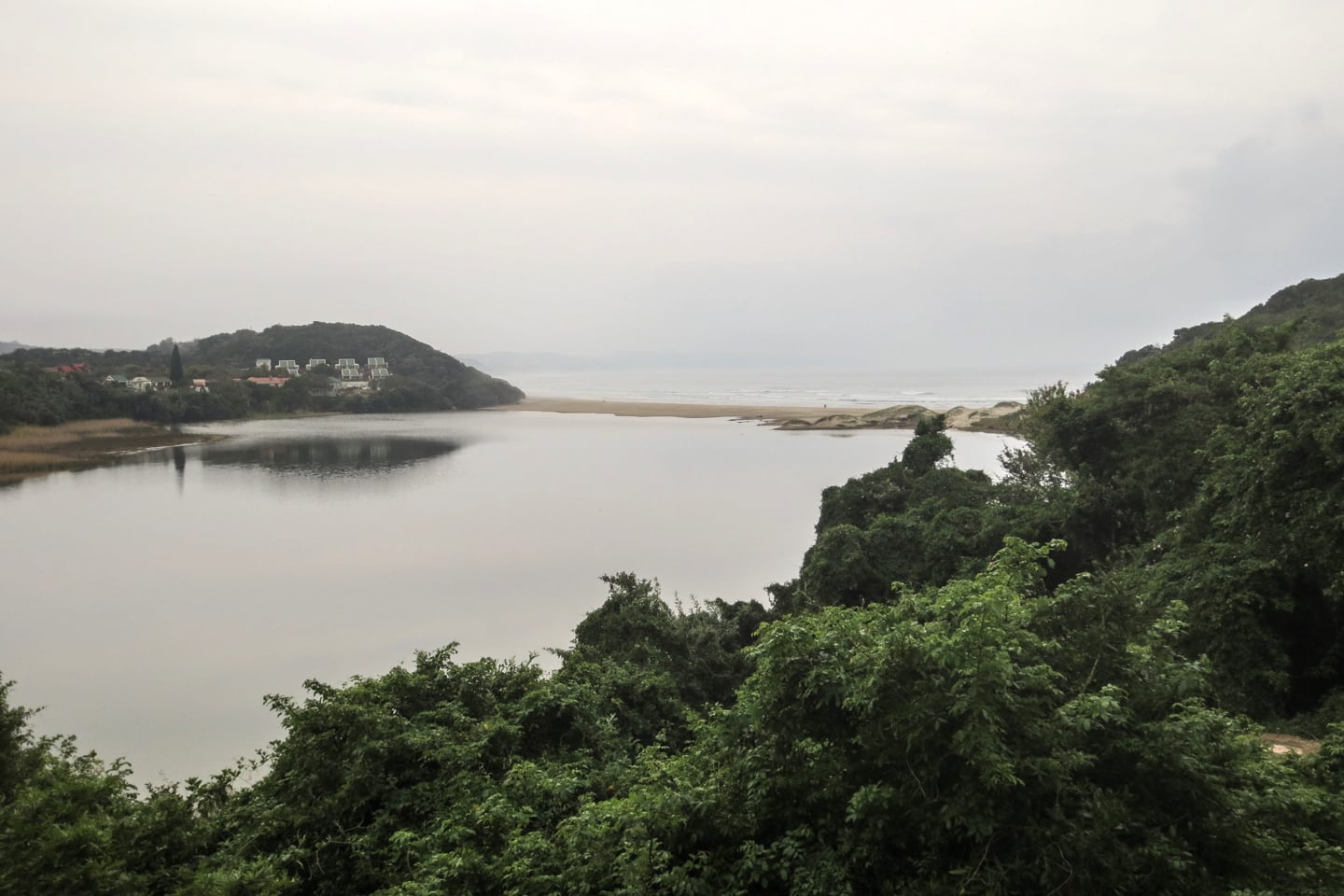 But one thing that bugged us about the cheapest accommodation in South Africa was that it all seemed to fall along the very well-trodden, well-established backpacker trail. In each place we visited, there seemed to be one very good budget/shoestring option, which attracted us, but also attracted hoards of young white South Africans (and Germans! So many Germans!) To make matters worse, in South Africa, they actually have a bus that travels door-to-door to all of these hostels — it’s called the Baz Bus — so rest assured, the crowds will find you! They make it so easy in South Africa, it’s a miracle when you do find yourself at a reputable budget hostel with nary a soul in sight…but don’t worry, that just means the Baz Bus probably broke down somewhere and the hoards of young, loud, party-seekers will be rushing in to your quite abode at around 3am. Geez, I’m starting to sound like an old man. Or maybe a dude who just values a good night’s sleep and hangover-free weekday…?

If you follow the Baz Bus trail (on purpose, or inadvertently as we seemed to), every place you go starts to feel like deja vu and you yearn for a little more diversity in your fellow travelers’ demographics. These are international guesthouses, after all. Wouldn’t it be lovely to see a few more Israelis, Aussies, Koreans, Argentinians? We’re in Africa, how about some Ugandans, Nigerians and Kenyans like I’ve met at hostels in other parts of the world? Here’s a novel idea, how about black South Africans, in addition to all of the white South Africans, like more of what we experienced in Cape Town and Stellenbosch? How about some families, like in Latin America and Asia? How about some peeps over the age of 40, like, well everywhere else we’ve been except South Africa! You know who you are! Come on out to South Africa! We could use a bit of fresh conversation. 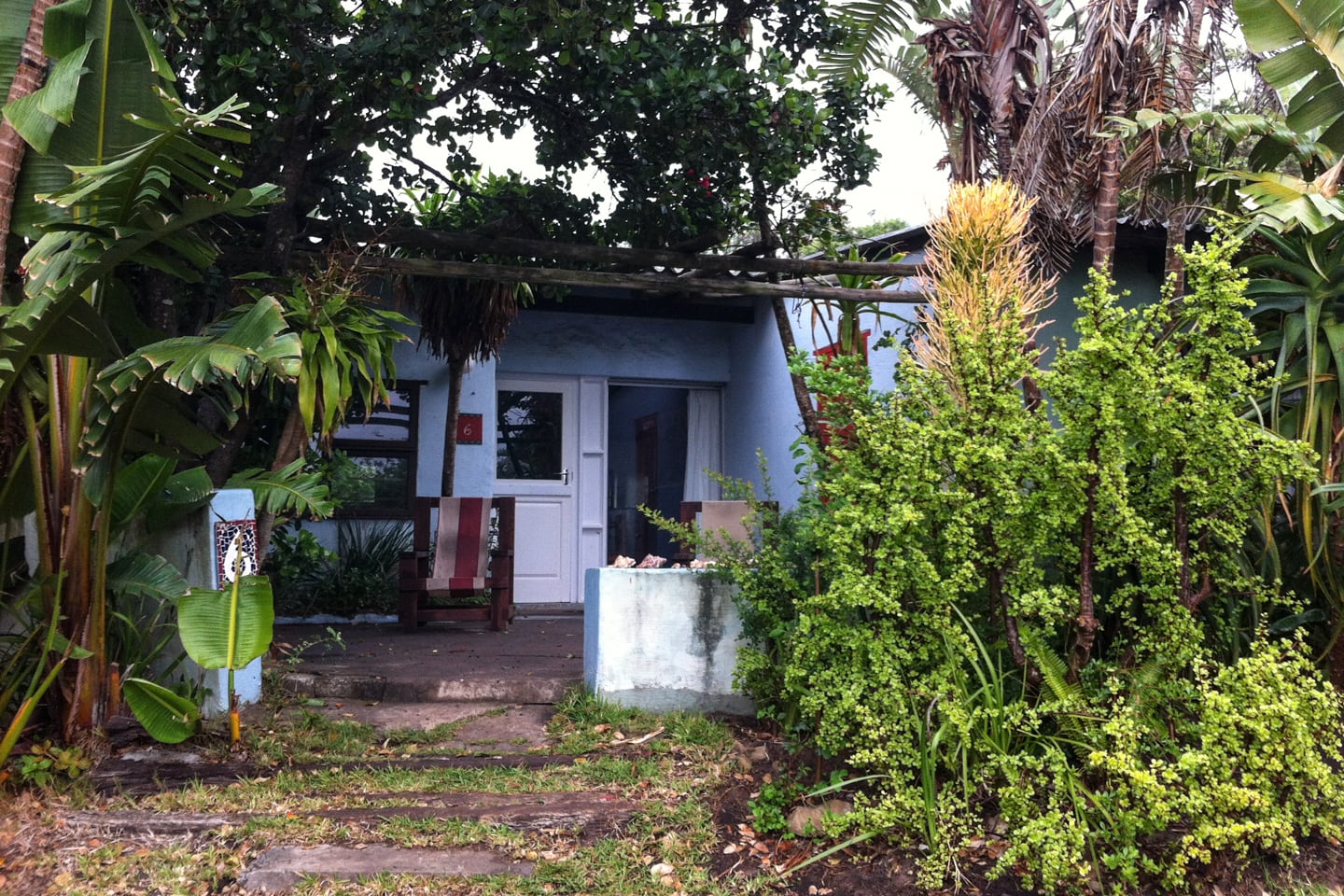 Don’t get me wrong, Buccaneers was a great stay, made even better by the fact that the place cleared out the second night and we got our entire cottage to ourselves! But we still yearned to get off of the Backpacker/ Baz Bus trail. We had our own rental car, after all. There was nothing stopping us (except maybe sandy roads). It was settled. We’d pay a few dollars more on our next stop in a remote location that was dozens of miles from the nearest Baz Bus stop and enough of a splurge to out price most of the young, chain-smoking, party-hopping, loudmouthed backpacking set, but not enough to break the bank. A place of peace and solitude, only accessible by your own vehicle. White Clay in Coffee Bay, here we come! 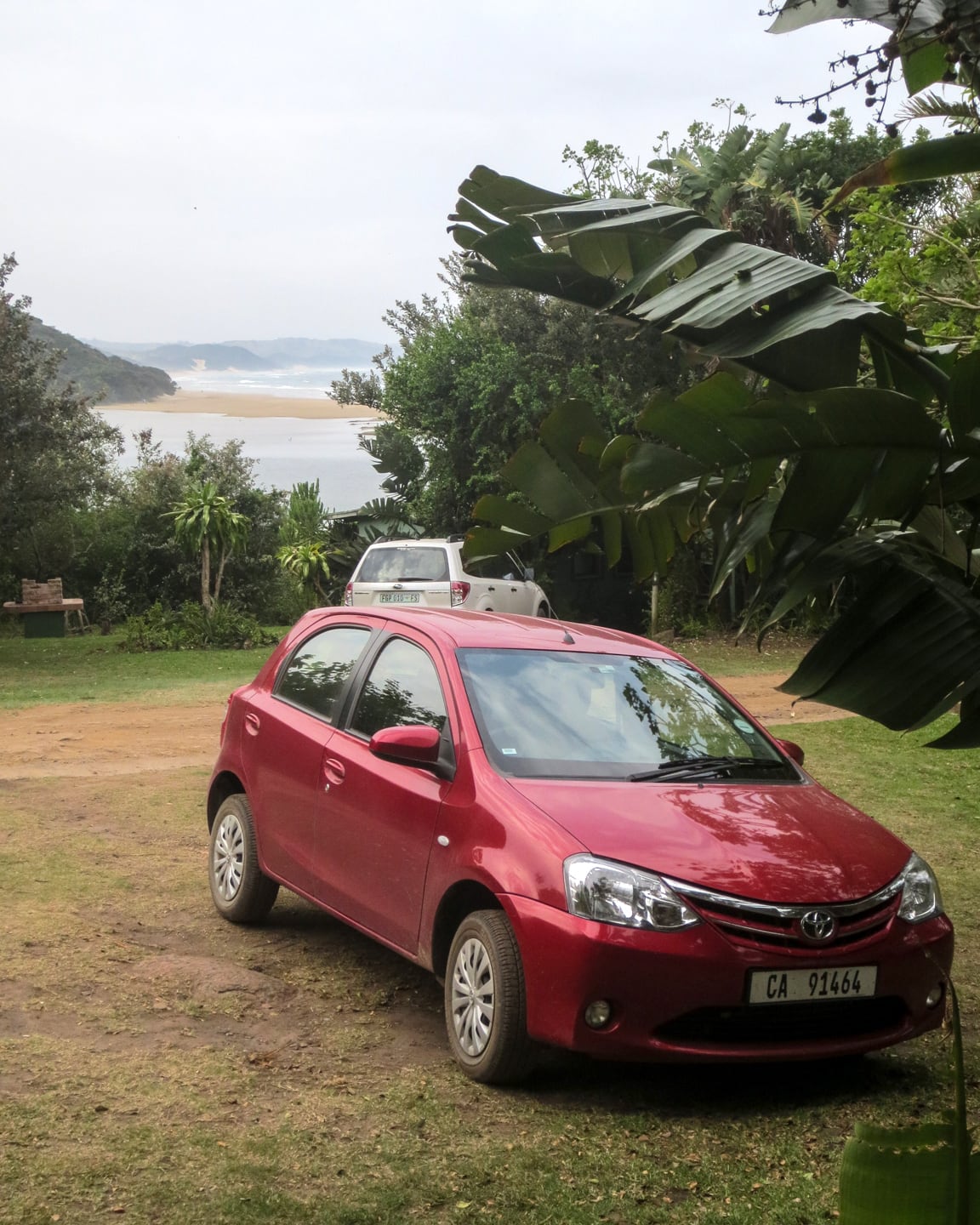 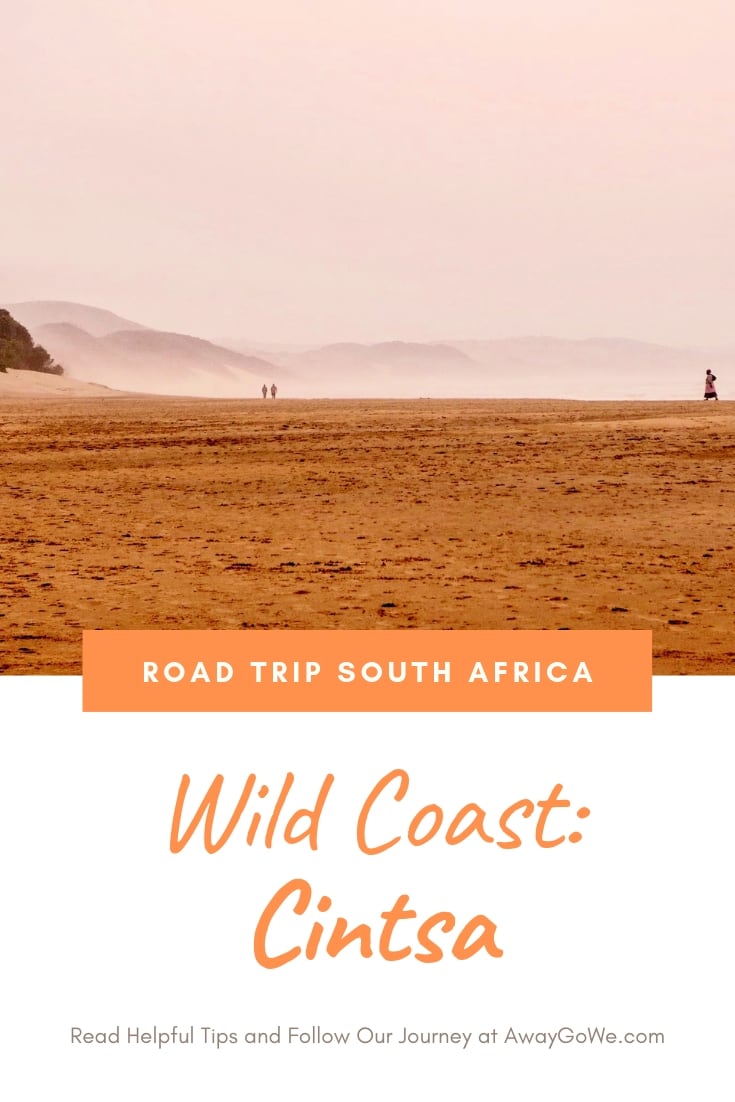