View of downtown Portland from Mt. Tabor. Lori’s parents came up to Portland a few weeks back in mid-April to hang out and check on the status of the belly […]

Lori’s parents came up to Portland a few weeks back in mid-April to hang out and check on the status of the belly. We’ve been having 2-3 day spring heat waves, but this weekend landed somewhere in between two — with some rain thrown in for good measure — so we chose our activities accordingly. Chief among them on this particular Friday: Pine State Biscuit, a stroll around the top of Mt. Tabor, a visit to Fubonn Market, and a walk around the Grotto. 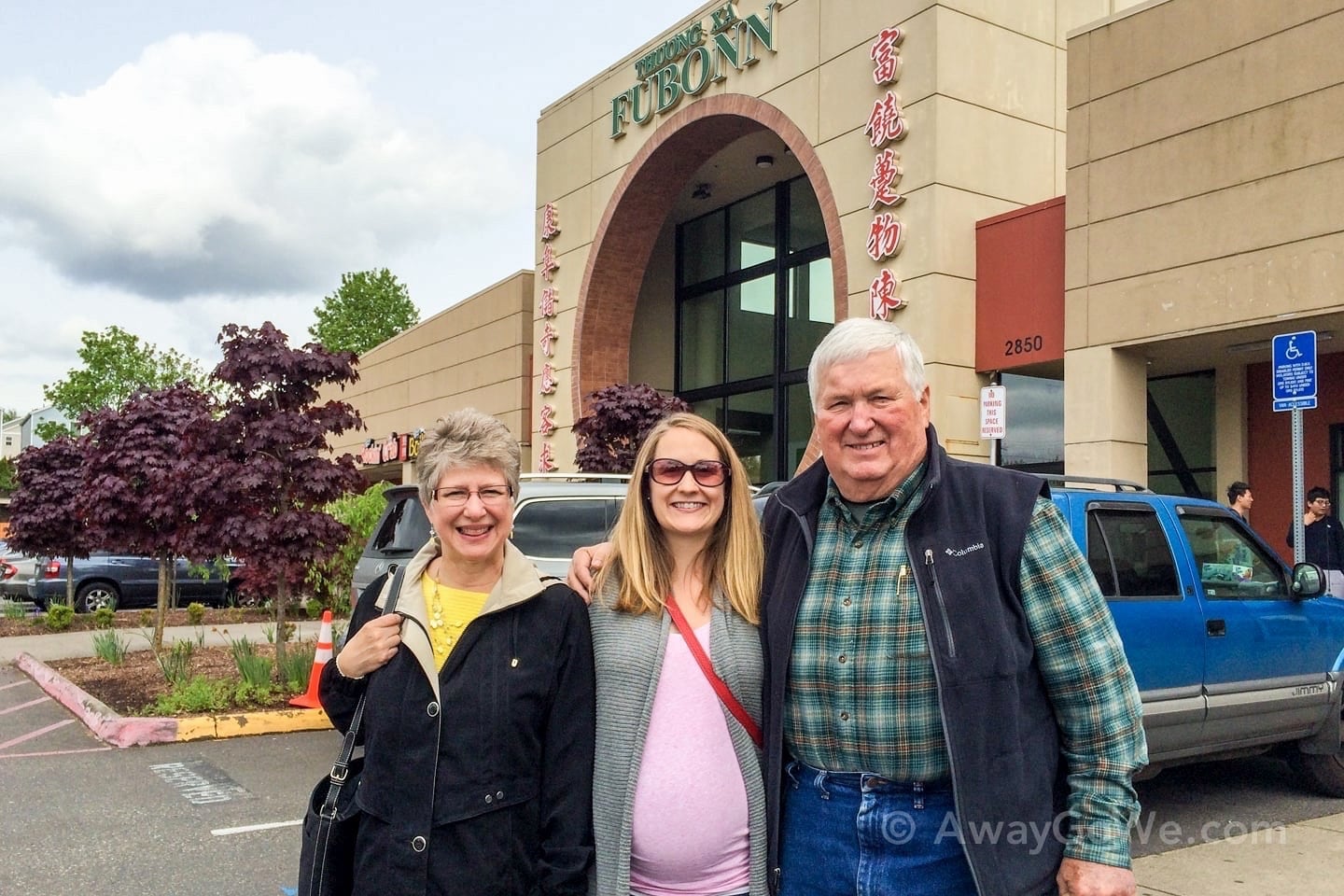 In the Portland area, Koreans have H-Mart, Japanese have Uwajimaya, and Chinese have Fubonn. To us, Fubonn feels about as close to the real deal as you’ll get in the PacNW, and we certainly find ourselves in the minority shopping there (amongst mostly Chinese folks), so it’s something of a comfort to visit.

16 months in Portland and we still somehow feel this way. Places like Fubonn offer a connection to the greater world — a glimpse outside of the PacNW bubble — that is actually pretty hard to access in Portland on a regular basis. We took my parents here last summer, in tandem with a visit to the Jade District Night Market, during a particularly hot, humid and hazy day. We thought it might be fun to take Lori’s parents this visit, and indeed it was.

Plus, I got to get my fix of poking around the fresh fish and meat section while also stocking up on spring roll wrappers and sesame oil for my homemade Vietnamese-style fresh spring rolls. 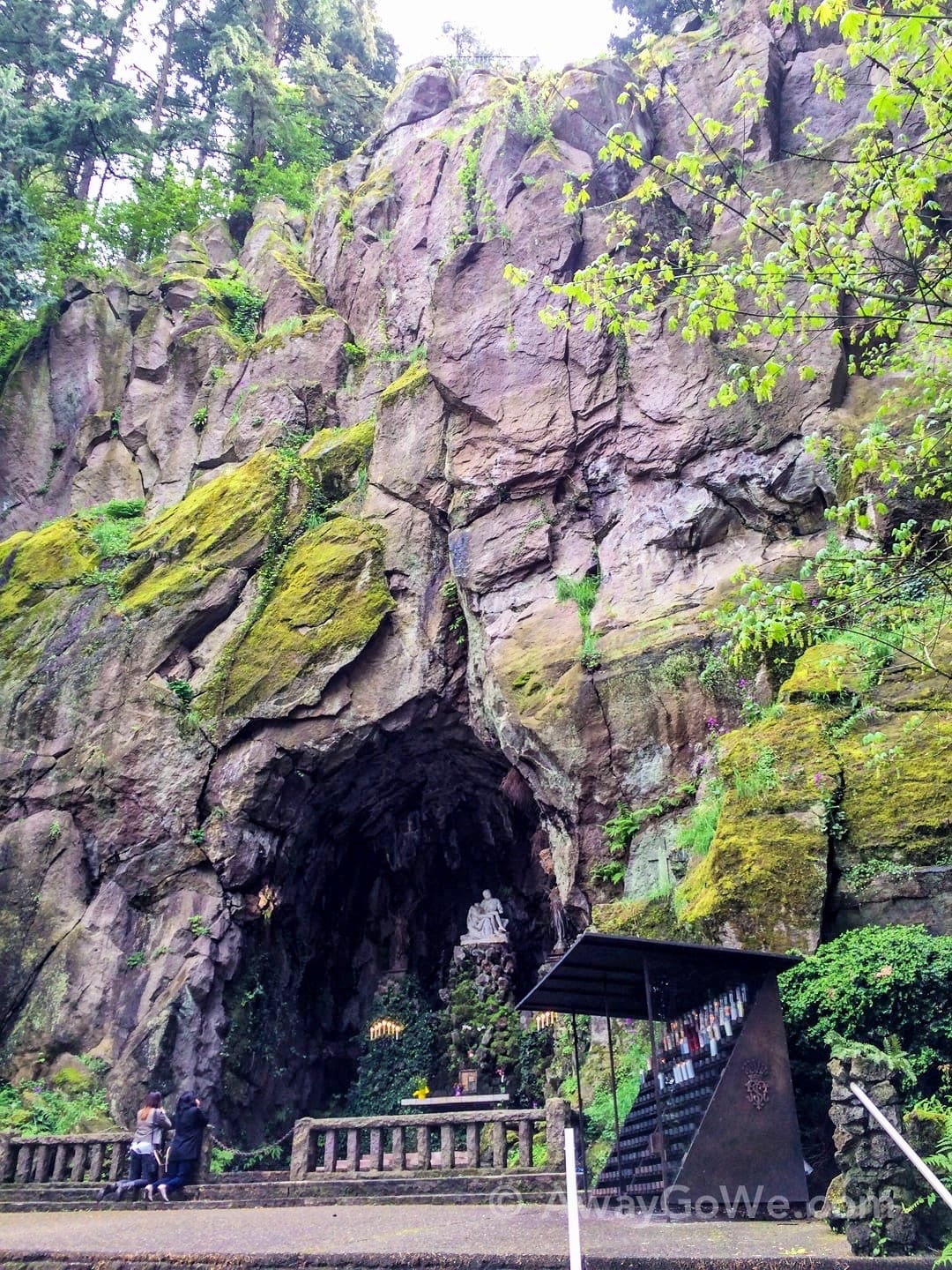 National Sanctuary of Our Sorrowful Mother (i.e. the Grotto)

Another one of Portland’s best kept secrets, the National Sanctuary of Our Sorrowful Mother (commonly known by its exceedingly more cheery and succinct name, “the Grotto”) is a must-visit with or without a car.

Lori and I actually first stumbled upon this amazing place back in 2012, the day before we flew to Asia for our six-month backpacking honeymoon trip. We were staying at the PDX Ho-Jo and saw a brochure for the Grotto while checking in. It piqued our interest and was right across the street. We had a few hours to kill and were planning on spending 14+ hours sitting on planes the next day, so we thought we’d take a walk and check it out. 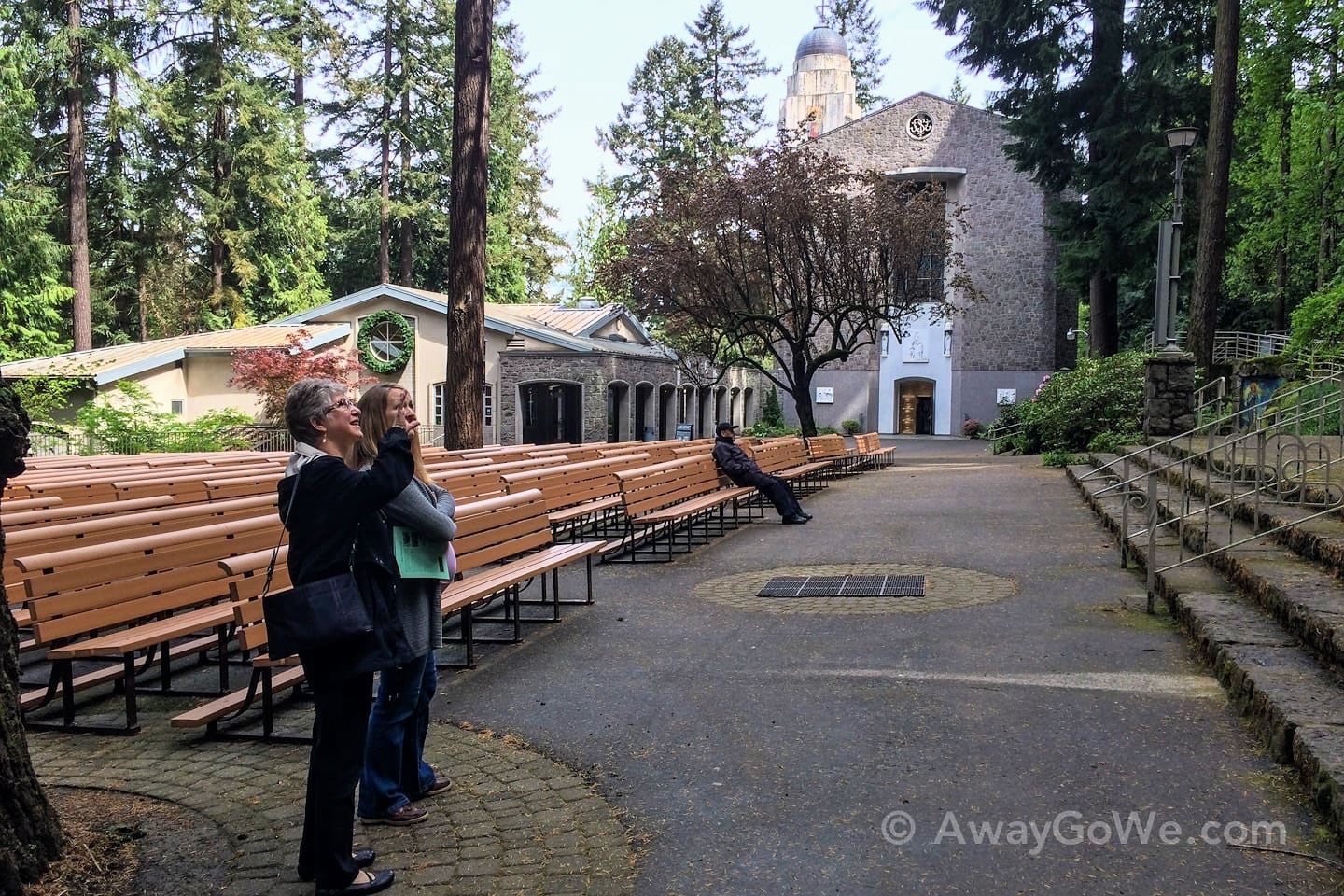 We’ve been back a few times since to stroll around the tranquil grounds, but had never taken the elevator to the upper portion. The bottom portion is free and the elevator costs a few bucks — that, coupled with the fact that we really didn’t know what was up there ensured that we likely wouldn’t have made the trip to the top without somebody else treating. It became very apparent, very quickly, that our past hesitation had been a huge mistake — the top part is the best part! A perfect example of how frugality can be both a virtue and a vice.

Atop the 110-foot cliff that houses the actual Grotto (and shrine of Our Sorrowful Mother) is the bulk of the 62-acre botanical gardens for which the property is also famous. To the left as you get off the elevator is one of the newer additions to the gardens. Built in 1991, the 1,500 sq. ft. Meditation Chapel offers a peaceful and contemplative atmosphere and a commanding view of the Columbia River Valley. 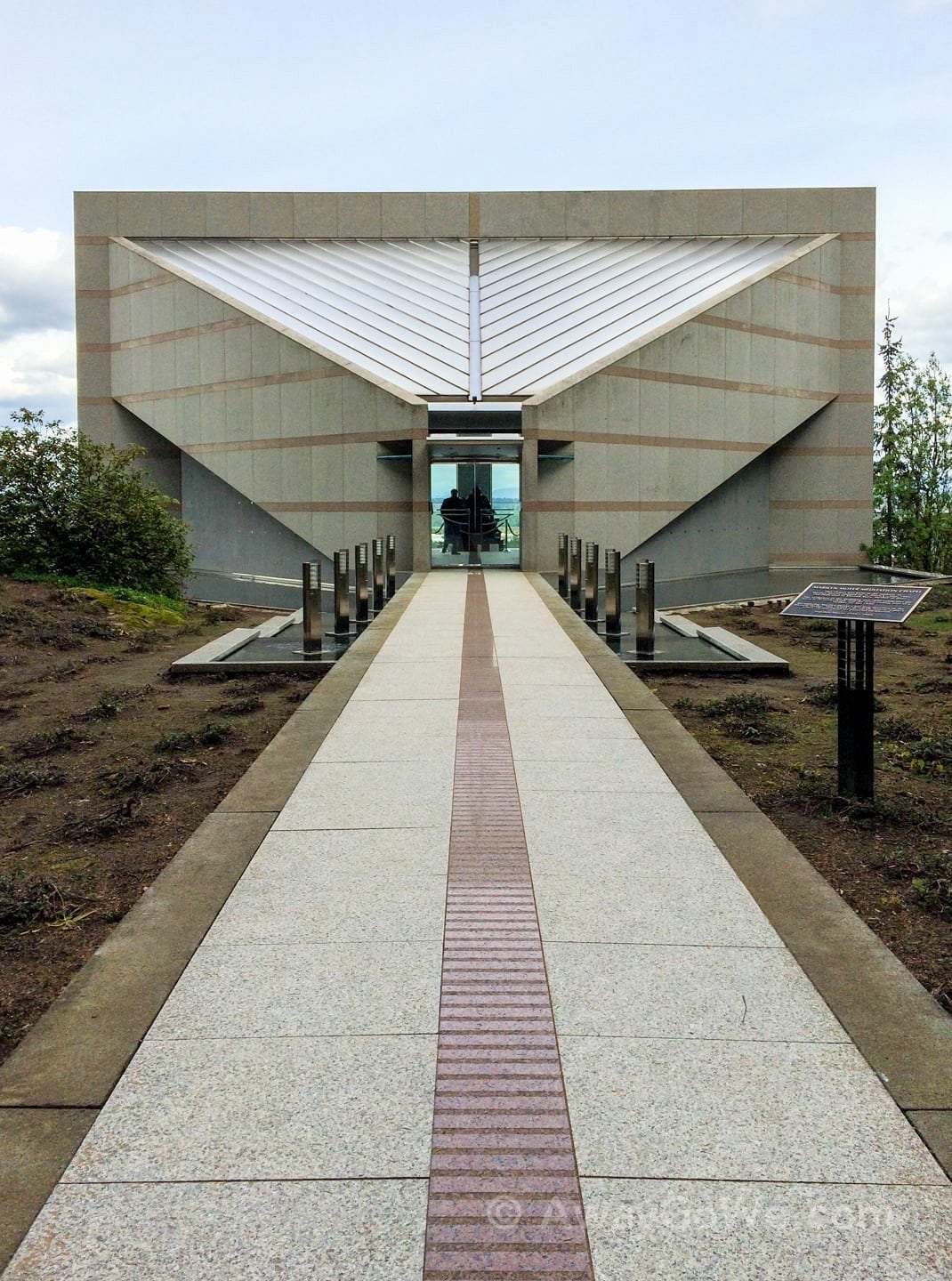 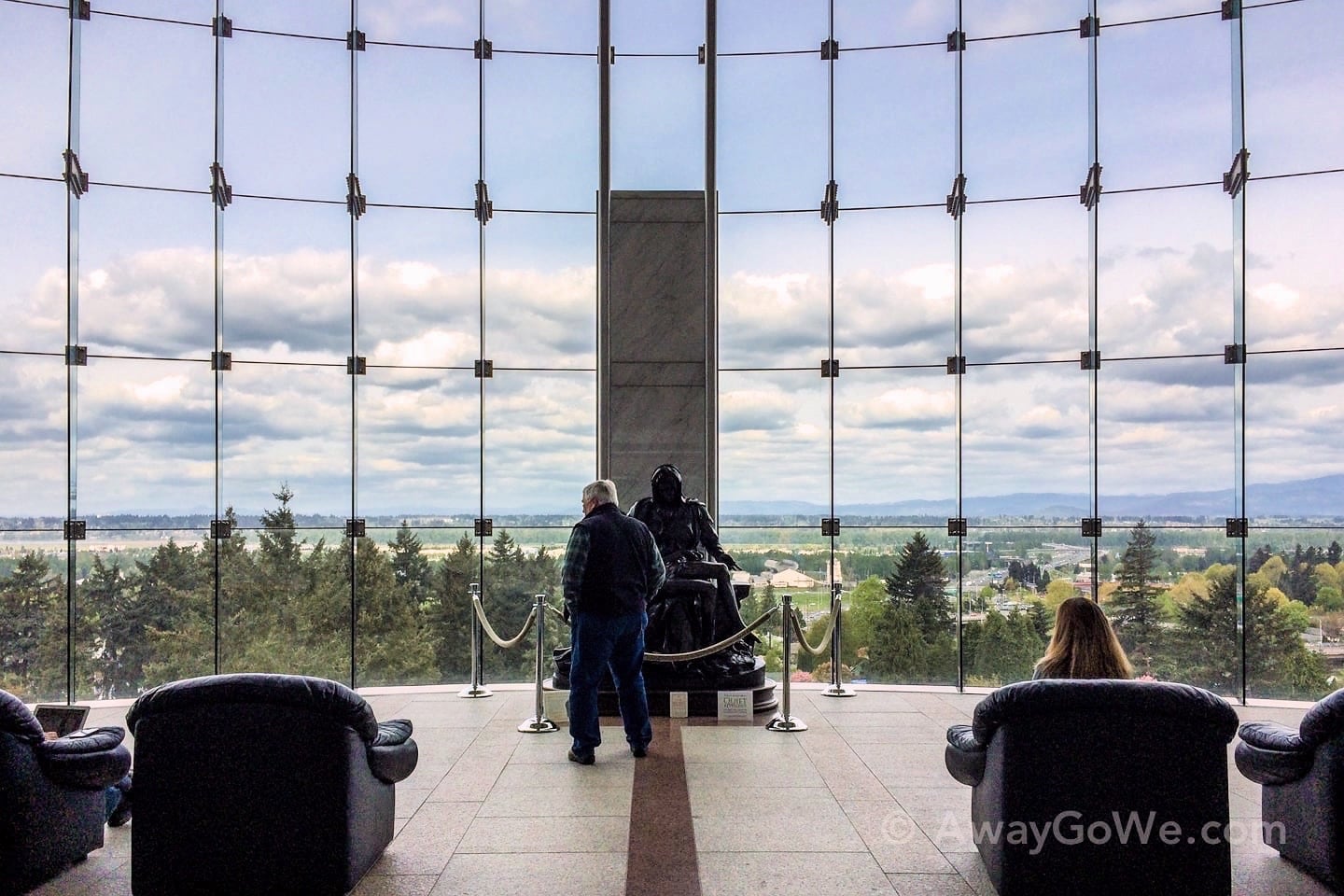 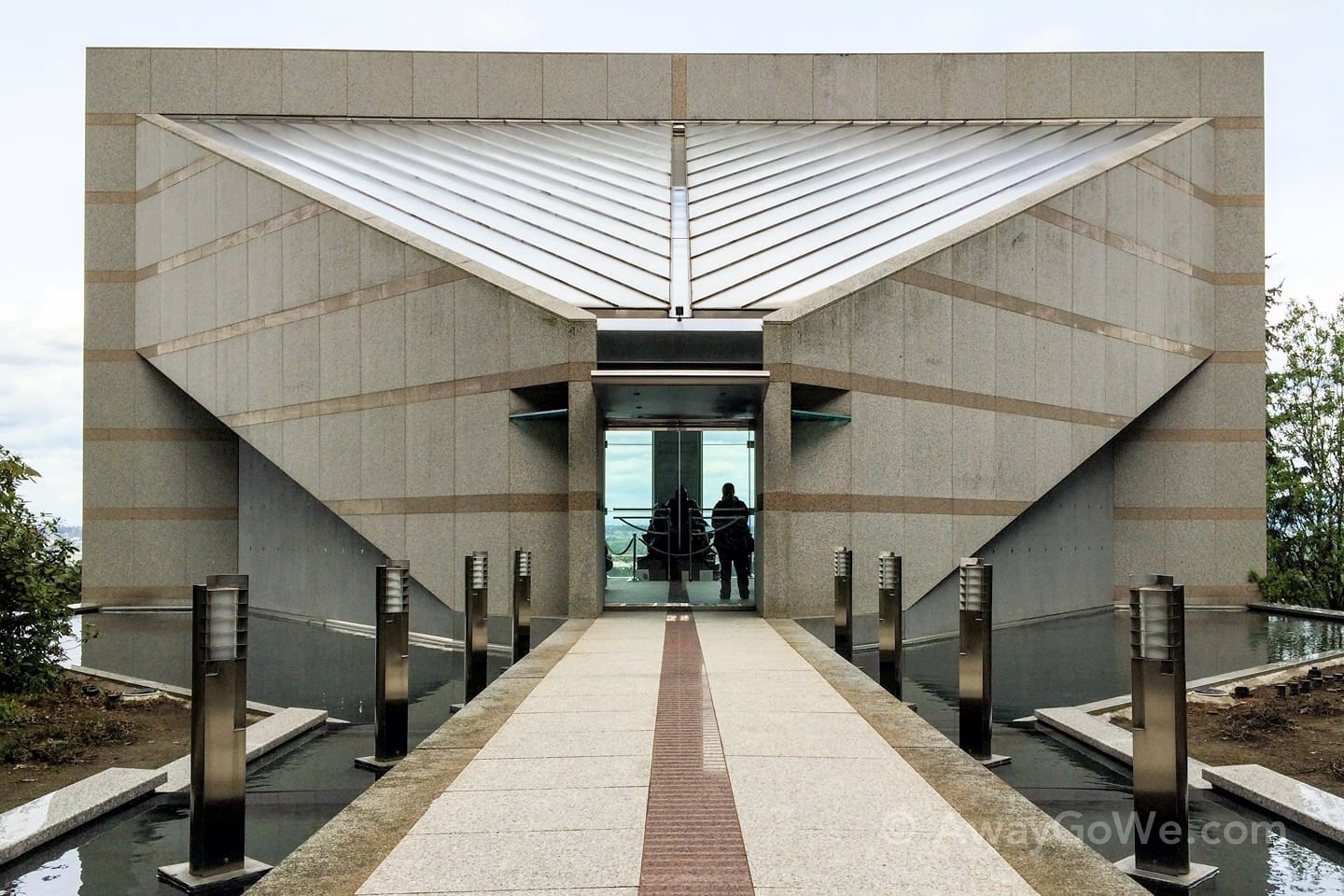 A short distance away, the rest of the gardens radiate from Meyer Memorial Garden Plaza. 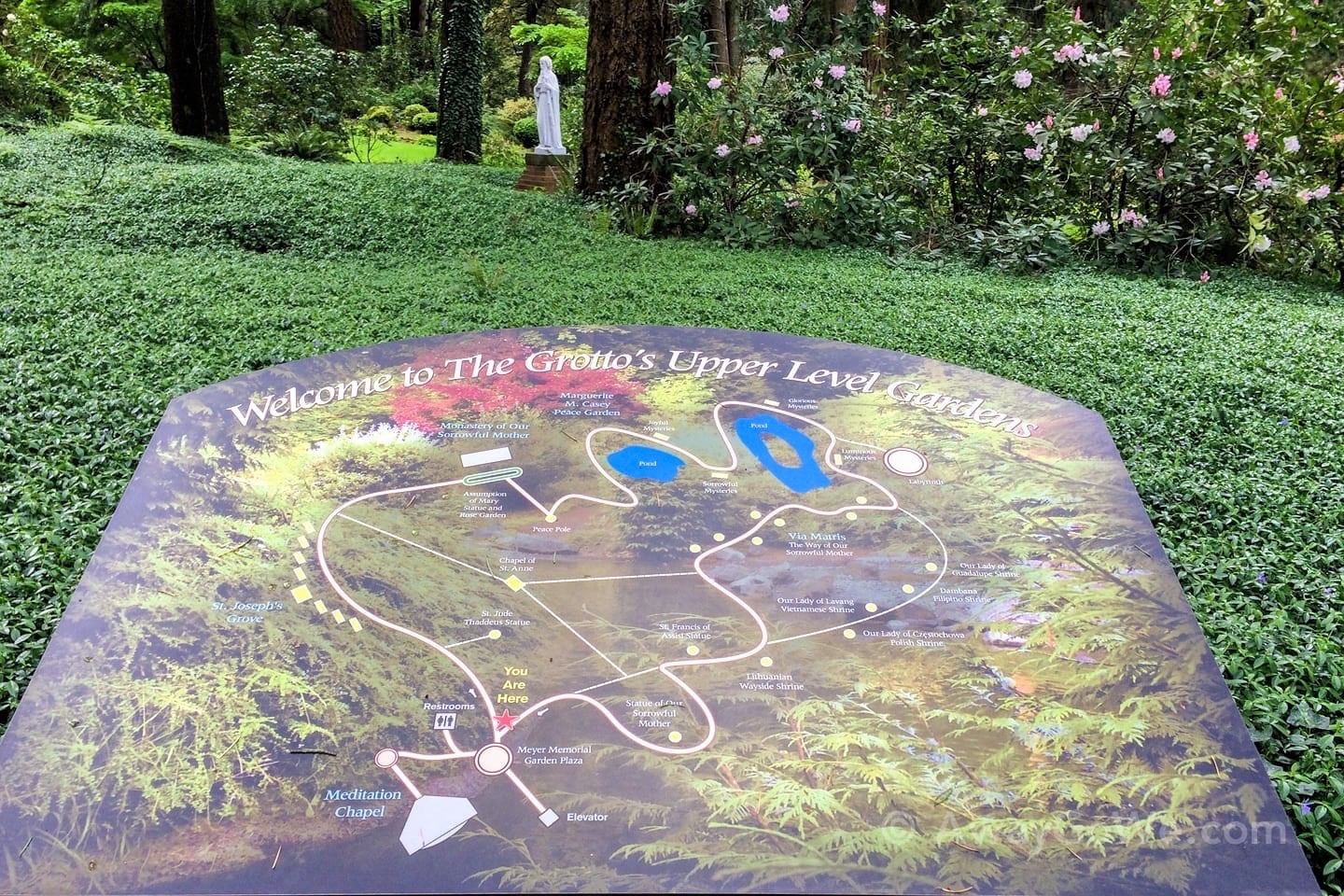 The Grotto’s own website (aptly named, thegrotto.org) does an excellent job of relating the unique history of this special place, so I’m including excerpts here rather than trying to retell the story:

The story of this beautiful shrine begins at the end of the 19th century, with a young boy who learned that his mother lay near death after giving birth to a daughter. In tears, the boy ran to the little parish church in Kitchener, Ontario, Canada. He prayed for his mother’s life, promising that if she were spared he would one day undertake a great work for the Church. Both his mother and baby sister survived. The future Father Ambrose Mayer never forgot his promise.

As a young man Ambrose joined the Servite Order and in 1918 was sent to minister as the first Servite pastor in the Archdiocese of Portland in Oregon. He carried with him the desire to fulfill his childhood promise, often disclosing to his associates his dream of finding a site on which to build a suitable tribute to Mary, the mother of Jesus. 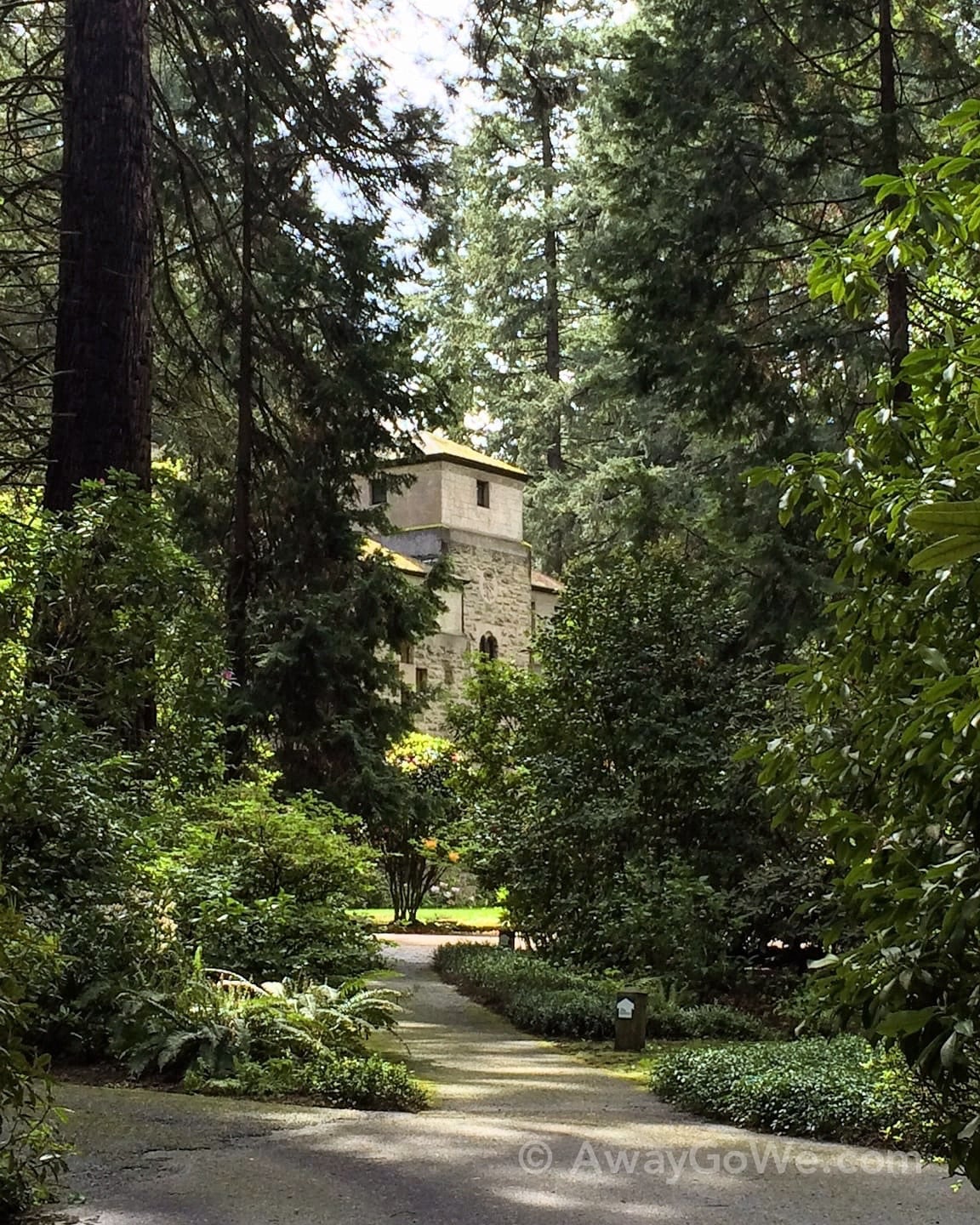 Fr. Mayer came across some acreage in 1923 which was owned by the Union Pacific Railroad Company. The property was a rugged, untamed wilderness that was once a quarry used to obtain rock for rail beds, and was currently scheduled for sale as residential property. He saw this as a natural cathedral which, once cleaned up, was perfect for the realization of his dream. 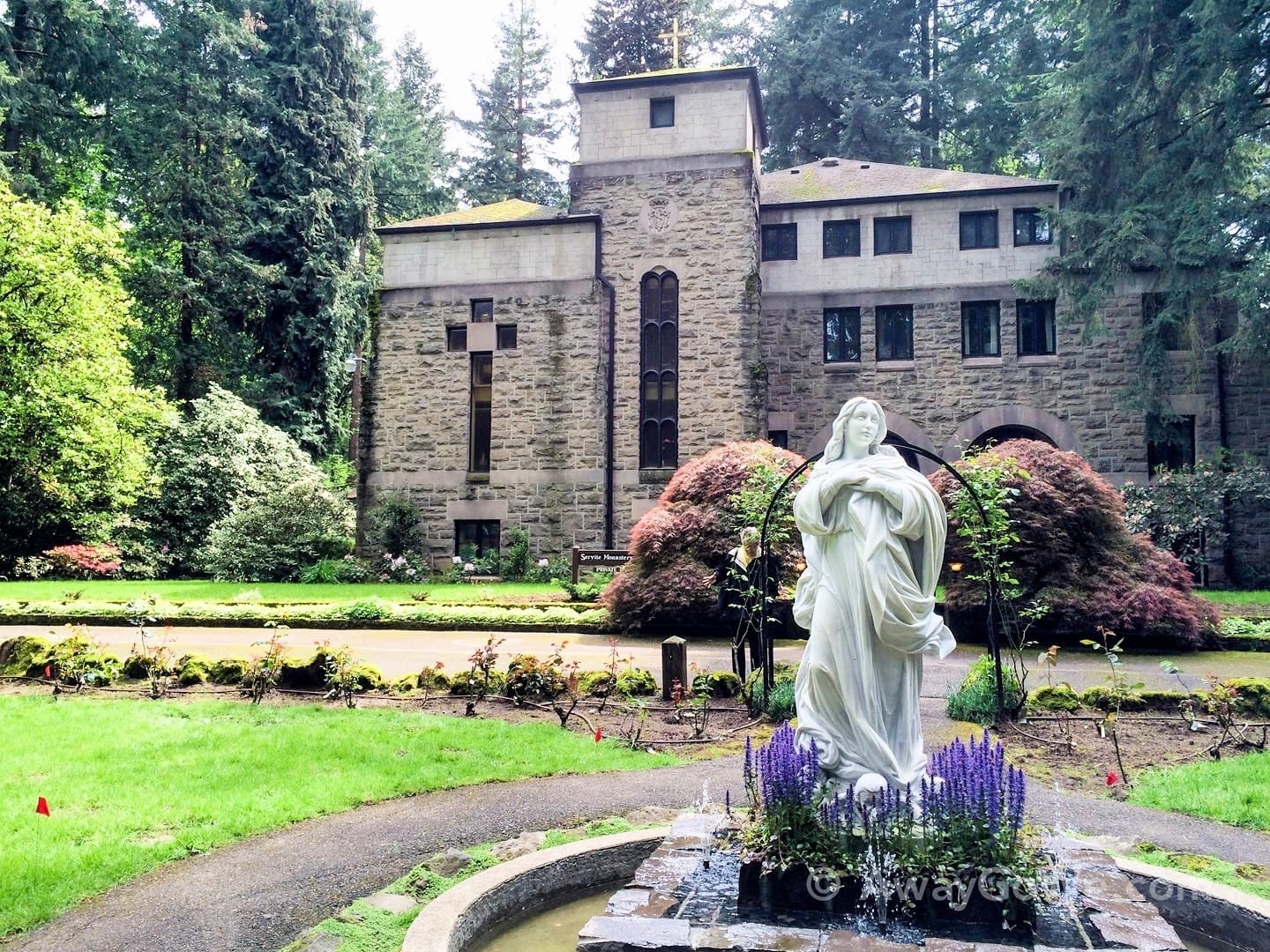 Although the asking price was $48,000, Fr. Mayer was not deterred. With the enthusiastic encouragement and approval of Portland Archbishop Alexander Christie, Fr. Mayer bid all that he had—$3,000—which was accepted as an initial down payment. A national campaign provided the balance of the funds. 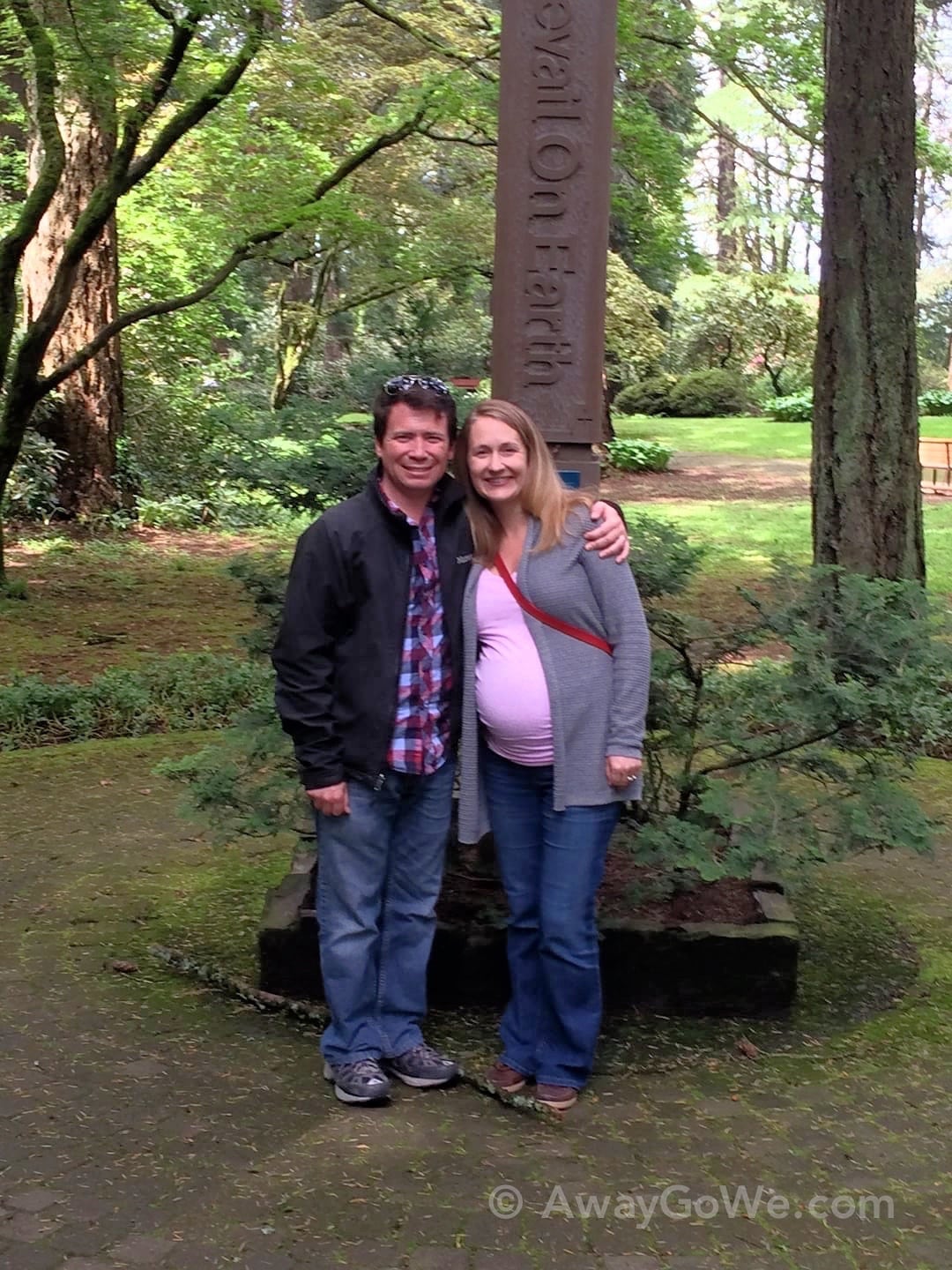 Crowning the initiation of the project was a letter from Pope Pius XI, written in his own hand, imparting a Special Apostolic Blessing to all those who “in any way or measure, show their good will and assist in erecting the Sanctuary of Our Sorrowful Mother in Portland.” 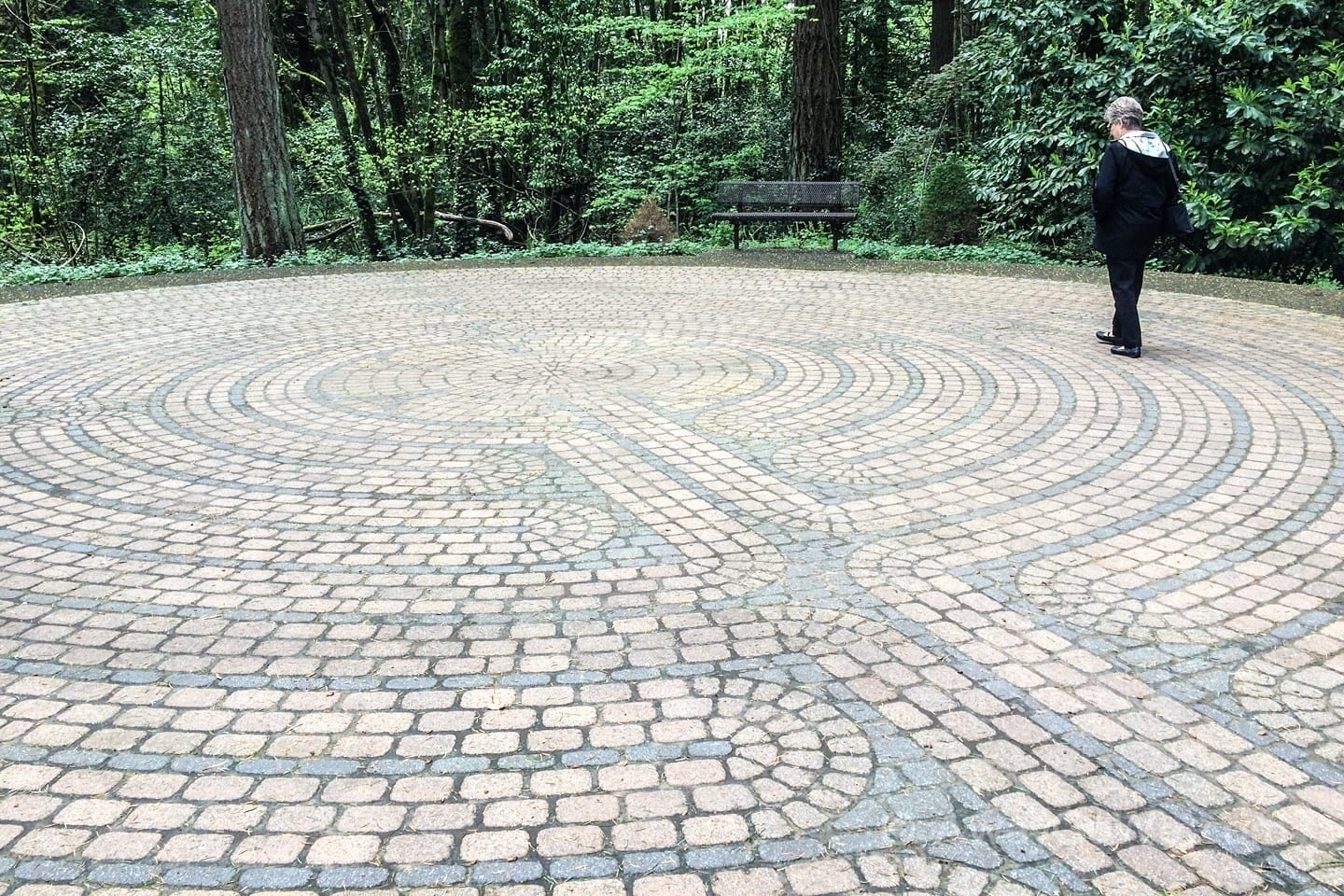 In September of 1923, the work began. A cave was carved out of the 110-foot basalt cliffside, and a stone altar built, above which was placed a depiction of Mary holding the body of her son after his crucifixion. A replica of Michelangelo’s Pietà was added several years later. 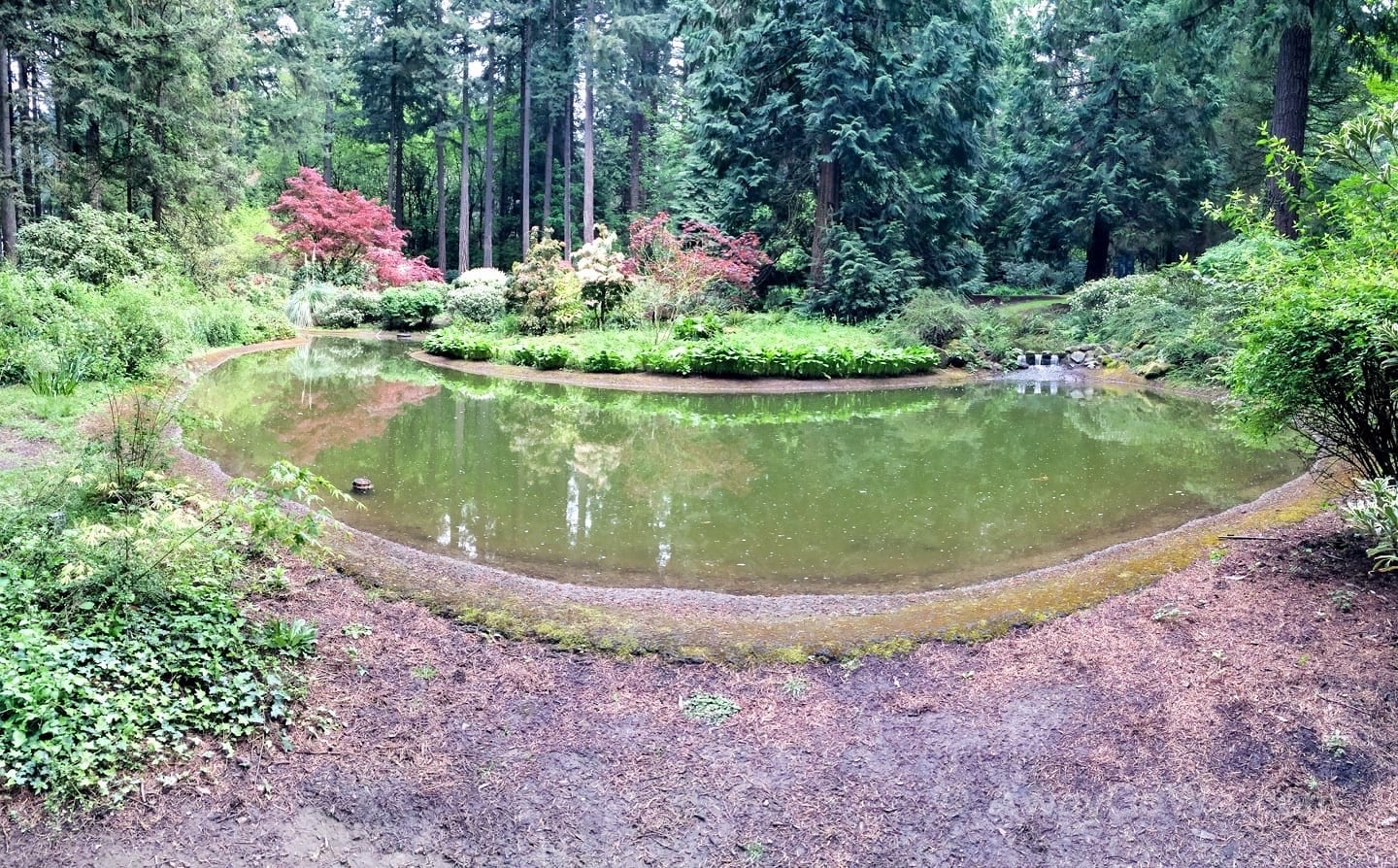 On May 29, 1924, three thousand people gathered for the first Mass and dedication of the Sanctuary of Our Sorrowful Mother. At the blessing, Archbishop Alexander Christie offered this prayer:

“Let this be a sanctuary of peace for all peoples of the earth and surely in this day a sanctuary is needed. Torn with differences, strife, and grief, the world needs sanctuary where the human spirit can seek peace and consolation.”

In 1983 the shrine was designated a National Sanctuary. Through the years, more than ten million visitors have marveled at The Grotto’s serene environment. 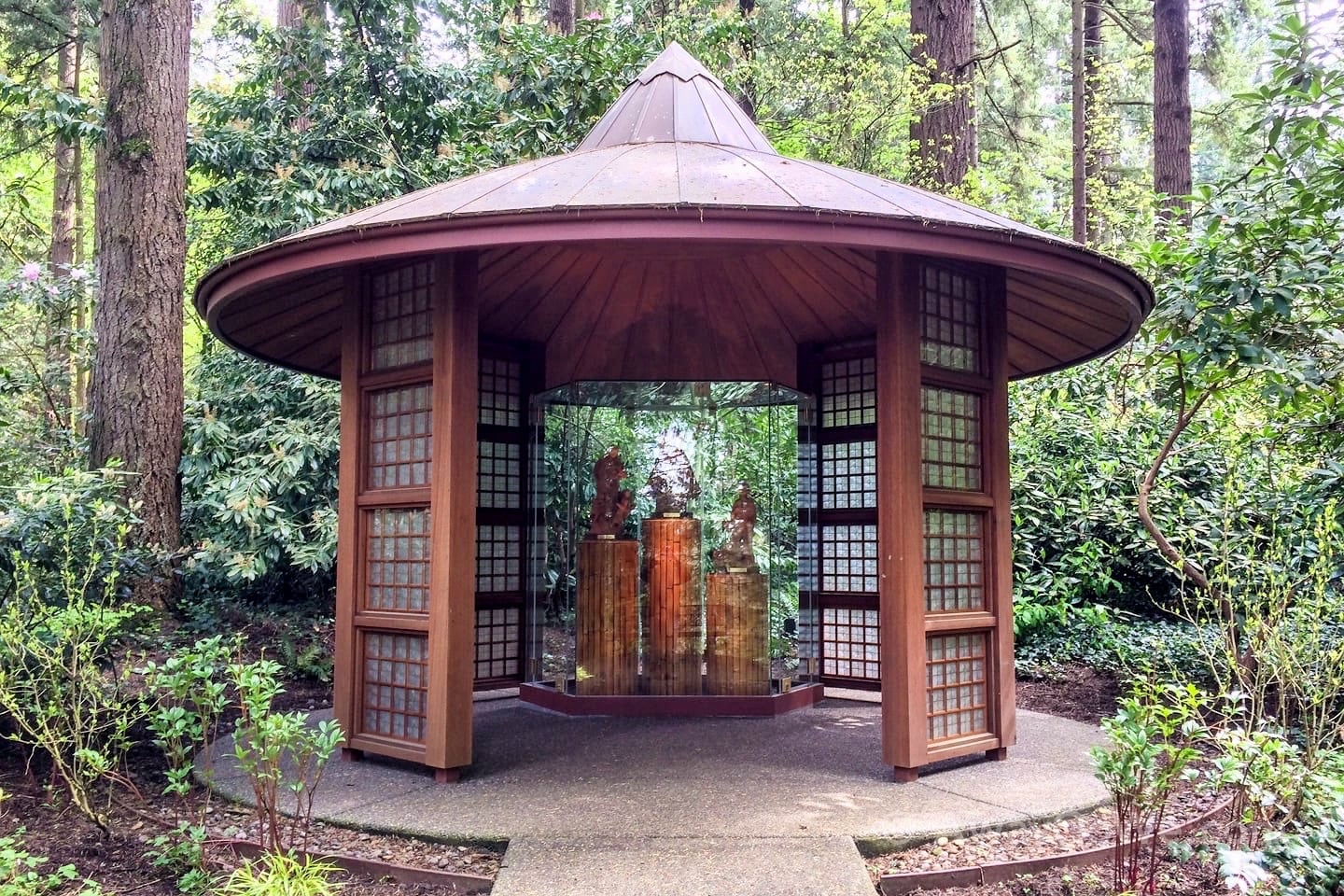 In the upper-level of the Grotto they are continuously adding new shrines, many of which have strong international ties. The Dambana Filipino Faith Shrine (pictured above) is a collaboration between the Filipino Community of Oregon and SW Washington and the Grotto and was dedicated in 2008. 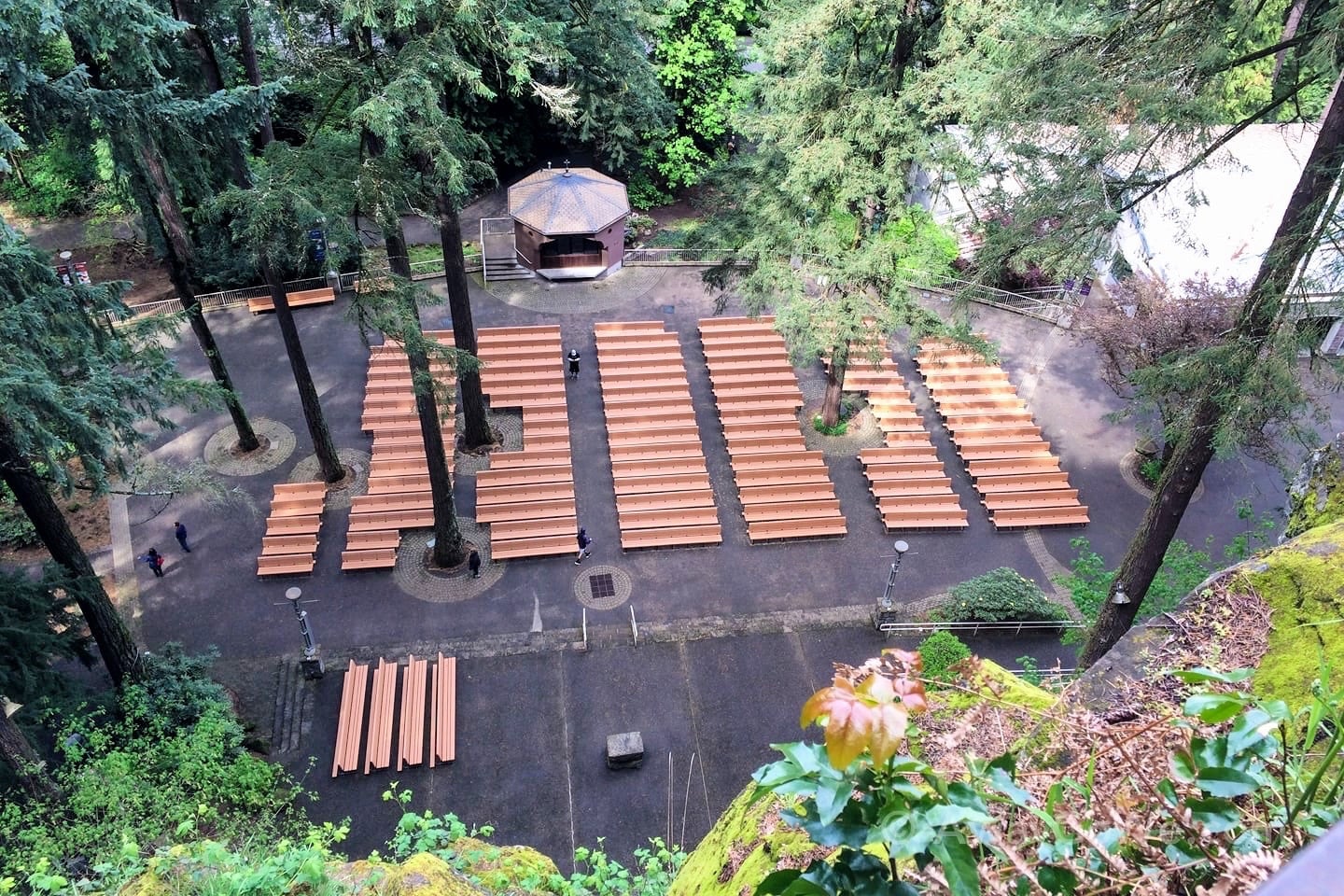 View from the top of the 110-foot basalt cliff above the cave (above), and a view inside the cave (below). 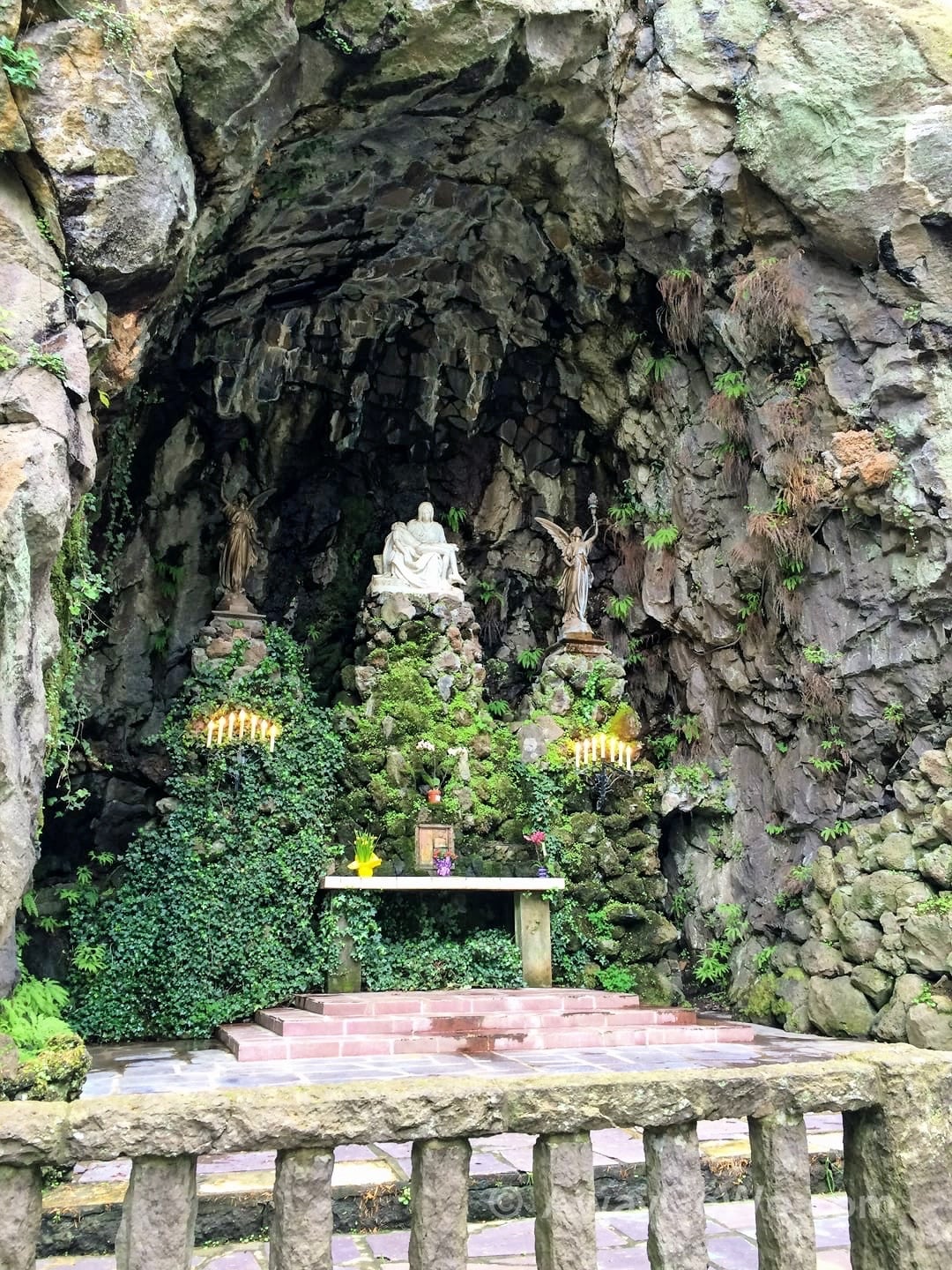 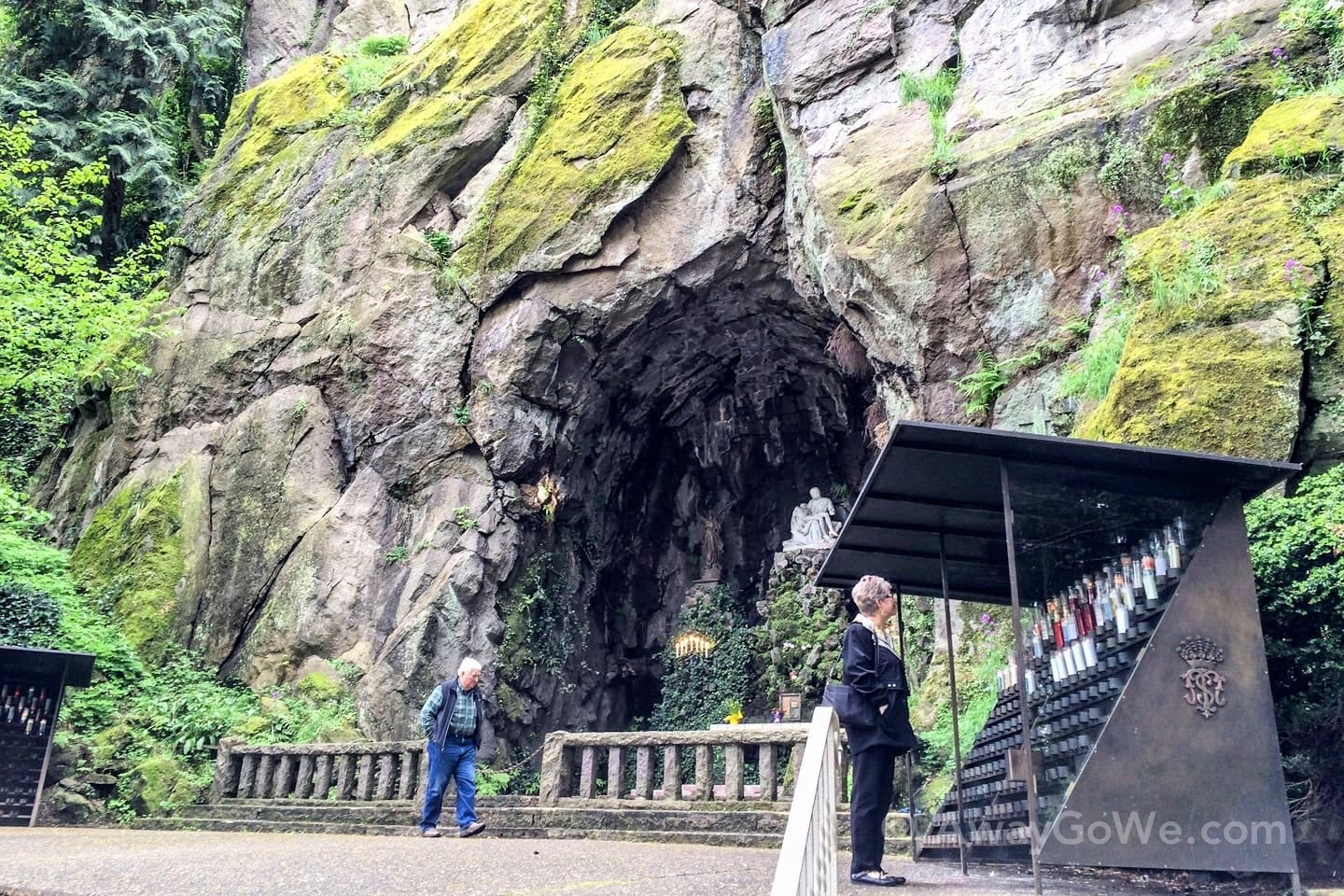 Rounding out our weekend with Lori parents, we made a visit to one of my favorite places in Portland (and in contrast to the Grotto, certainly one of Portland’s worst kept secrets): Powell’s City of Books. Powell’s seems to have been around forever (my parents used to take us here as kids) and expanding all the time. It’s the largest independent new and used book store in the world, contains about 1.6 acres of retail floor space and is said to have an inventory of over four million books, buying an average 3,000 used books every day. 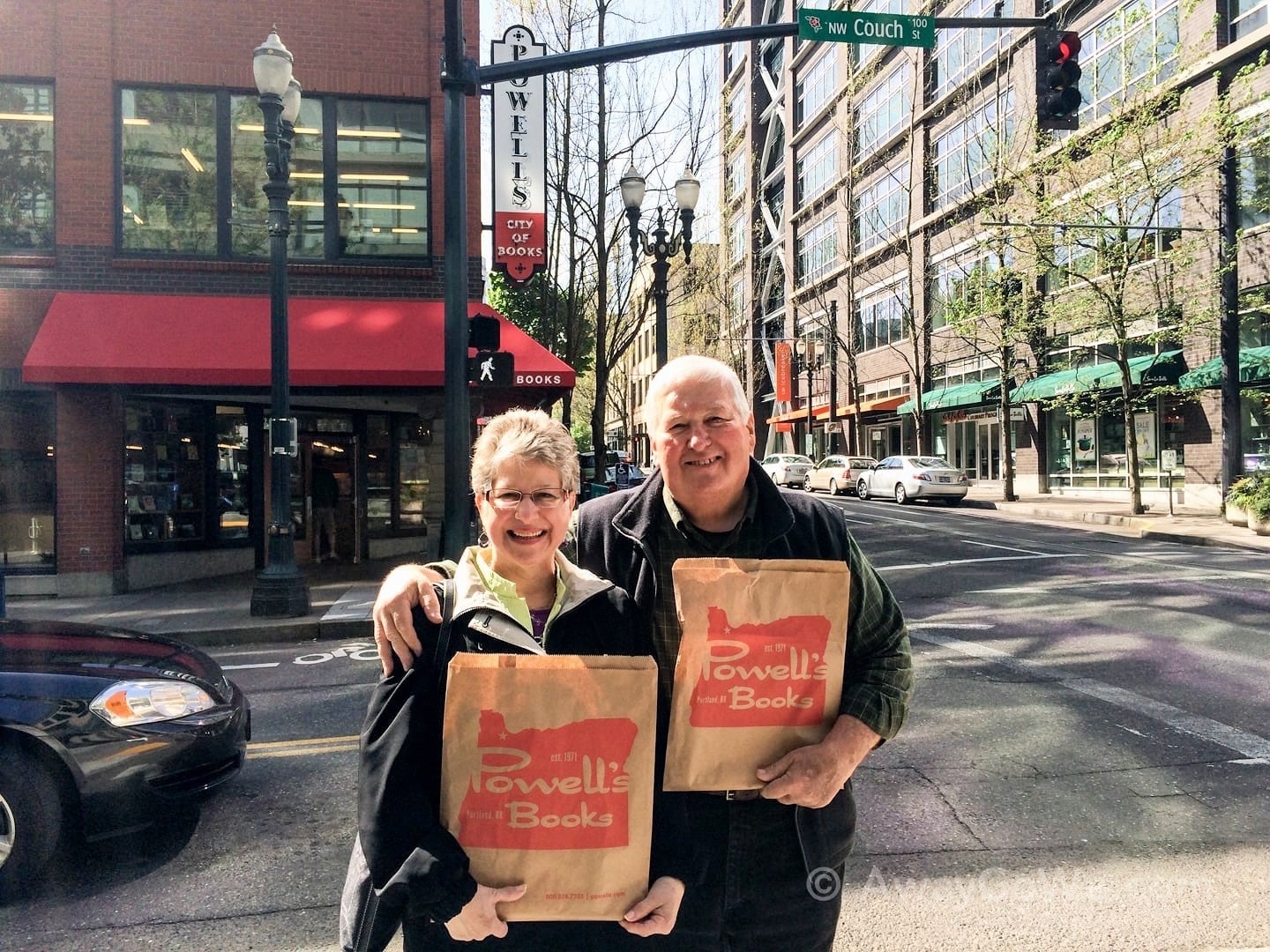