Hiking Coyote Wall and the Labyrinth

We took a drive out east to tackle Coyote Wall and the Labyrinth. Just an hour outside of Portland, the landscape changes dramatically, offering countless […] 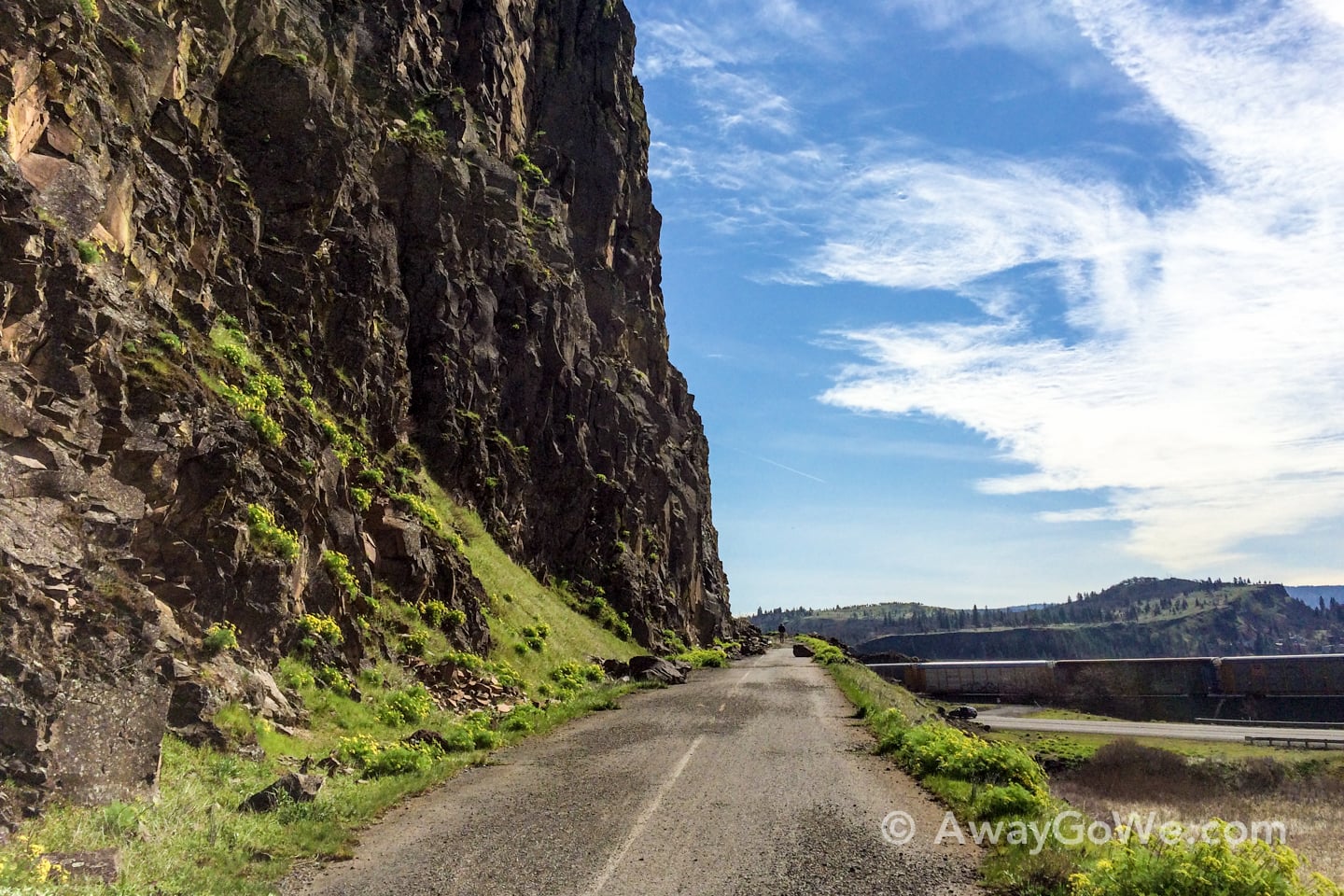 We took a drive out east to tackle Coyote Wall and the Labyrinth. Just an hour outside of Portland, the landscape changes dramatically, offering countless opportunities for scenic hiking along the Columbia River gorge.

Coyote Wall is 4 miles east of Bingen, Washington (White Salmon) just across the river from Hood River. You can access the hike by following Highway 14 or crossing the narrow green span that joins the two towns for $1.00. 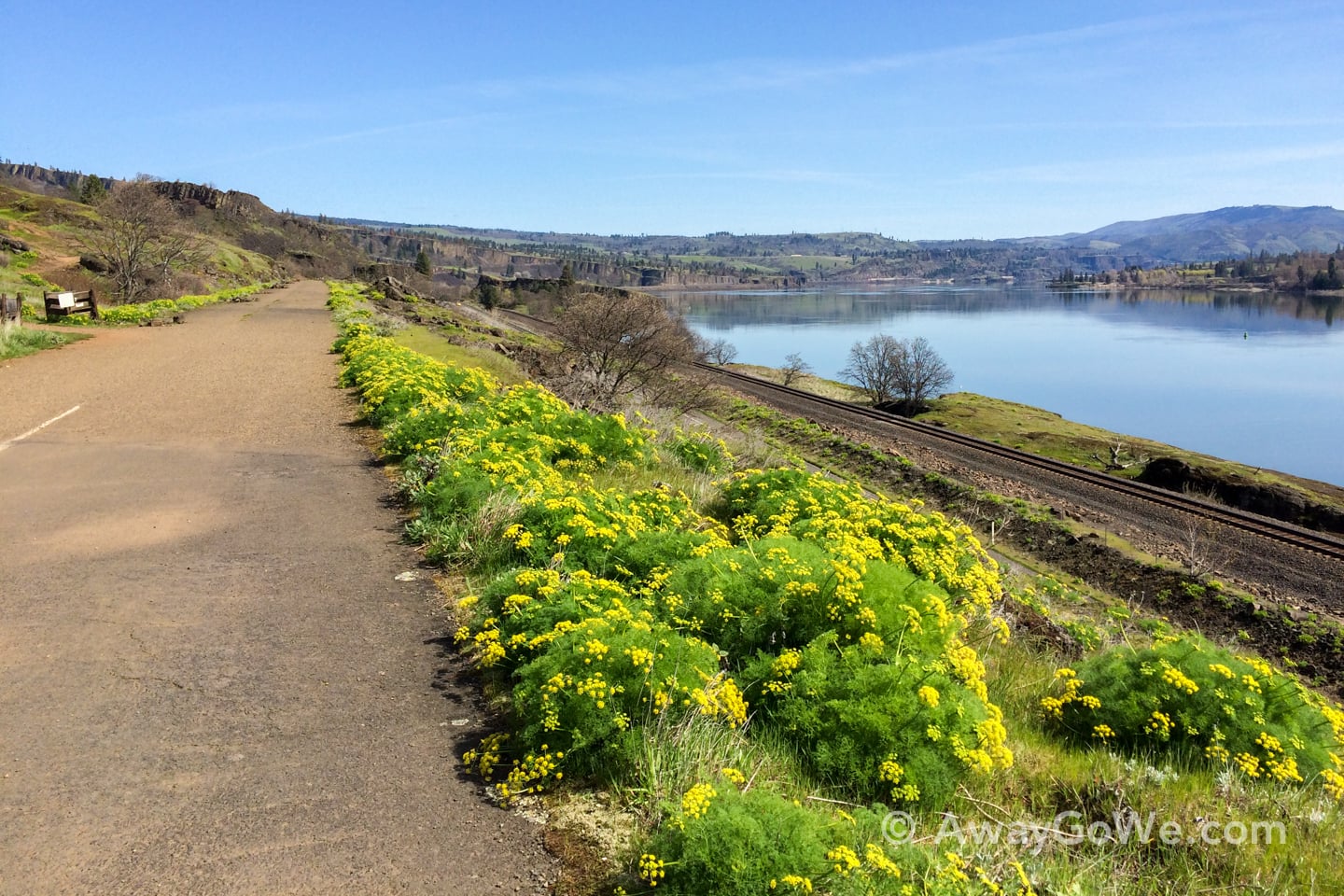 The hike begins by tracing the base of Coyote Wall, following the “Old Road,” formerly Old Highway 8 the main route along the Washington side of the gorge, which would have been an incredible (and incredibly close) drive along the rock wall. After a few minutes (and a field of very large fallen boulders) the terrain flattens out. At this point, we followed an old jeep road left, then up and up and up.

It might be worth noting that there were actually quite a few mountain bikers on the trails around here, which was a first for us as far as Columbia Gorge hikes go. Even though I was sure they’d be an annoyance, there didn’t seem to be too many and they didn’t pose any problems for us, so it ended up being fine. 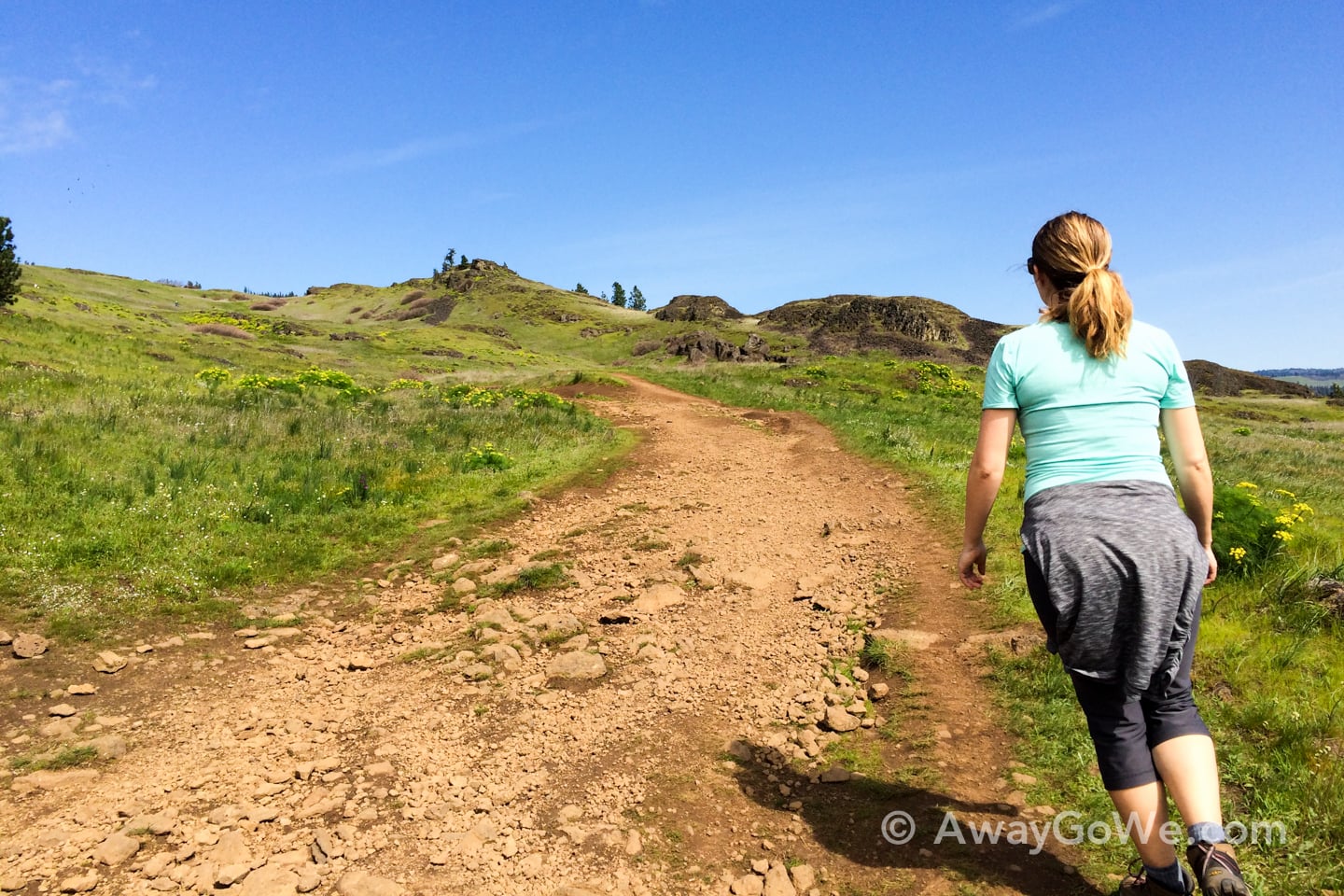 This hike is simply like no other that we’ve done along the gorge. For one, it’s wide open, very little cover from the sun. For this reason, we avoided hiking the Wall last summer. We made an attempt in the fall, but the weather was against us. 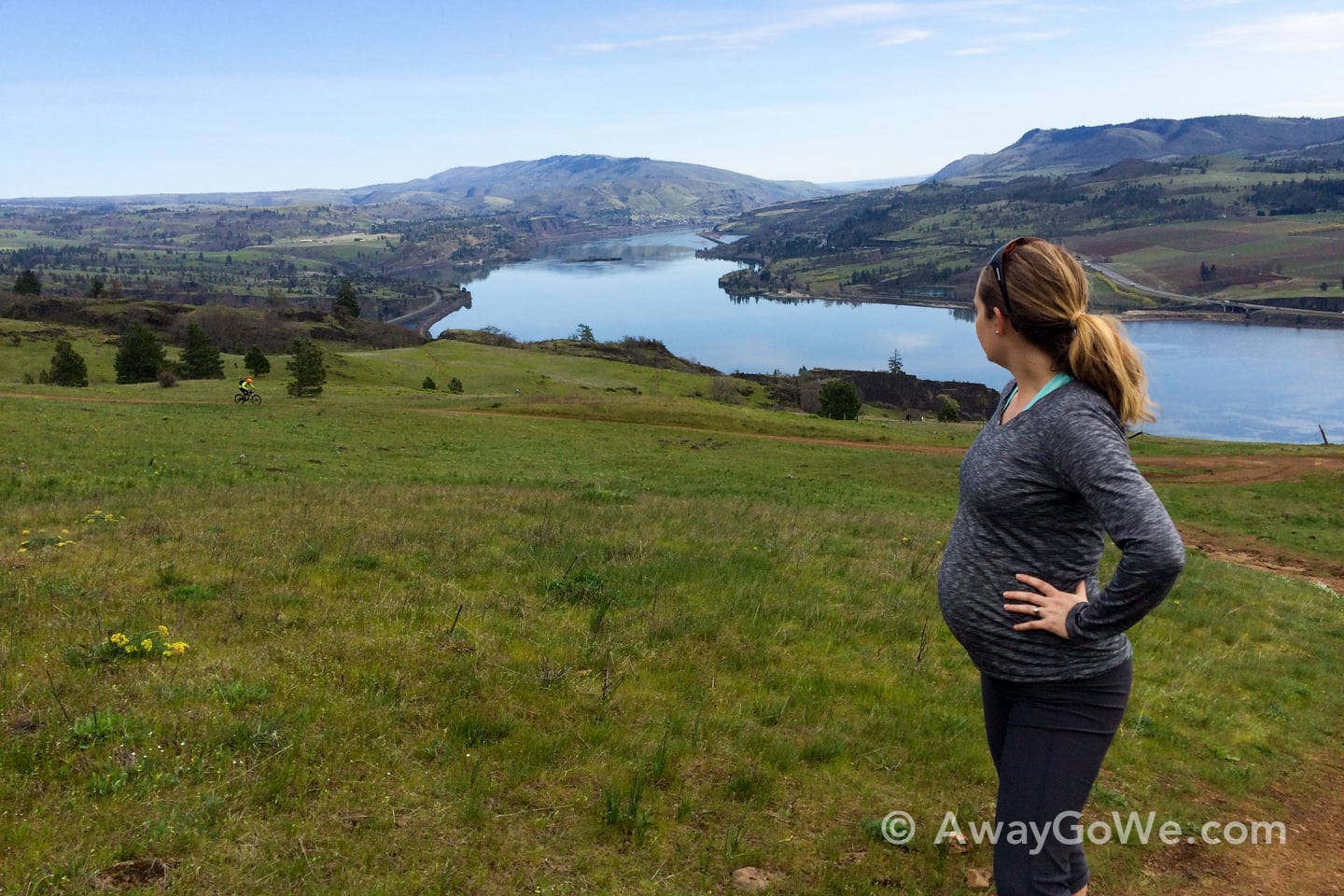 However, the weather was forecast to be exceptionally brilliant (…and stable…for the PacNW in March) so we made our way east, and boy did we luck out. That’s the Columbia River down below, and Oregon on the other side. 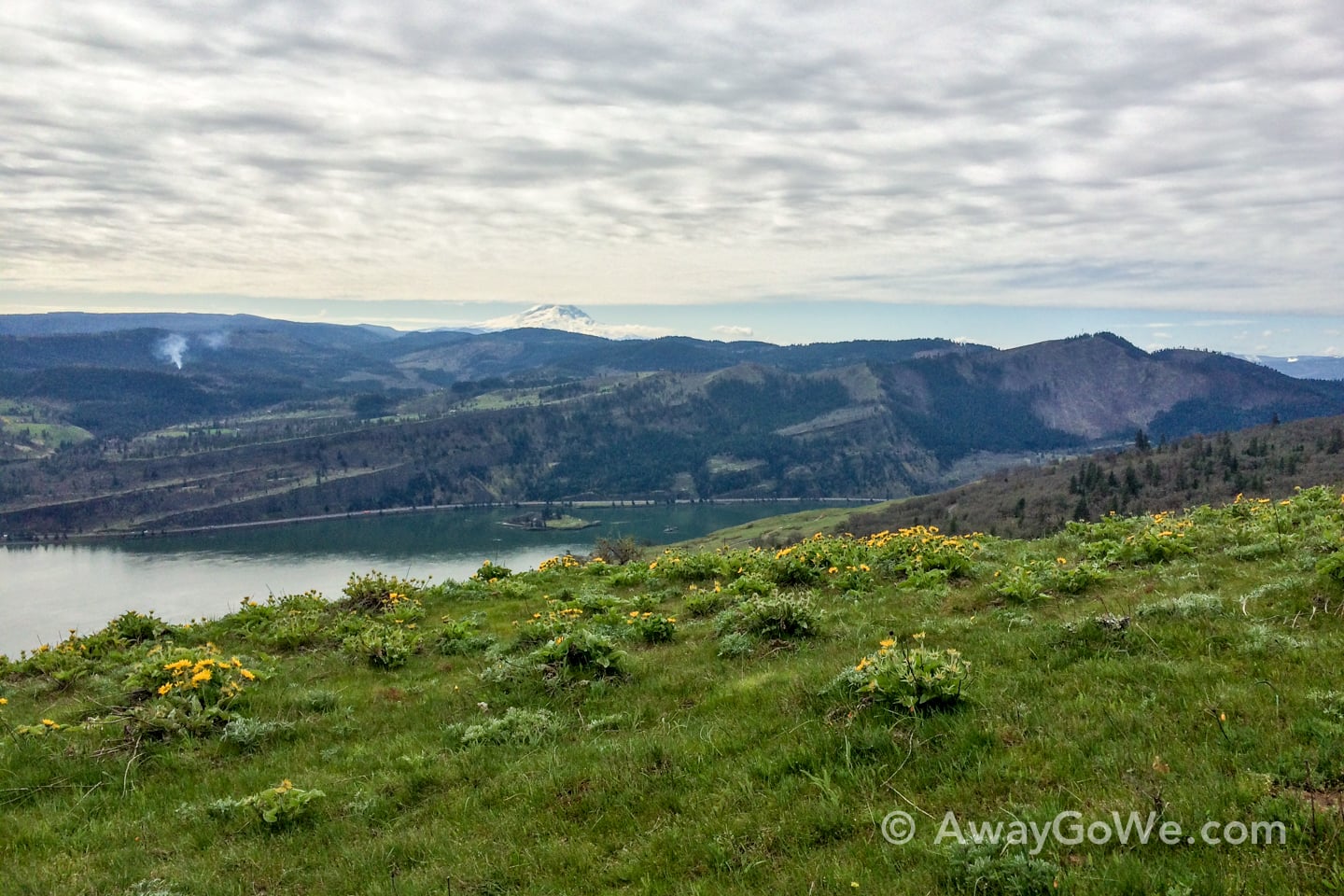 Of course, looking back toward Portland, there was still substantial cloud cover. Even so, the weather offered a peek of Mt. Hood in the distance. 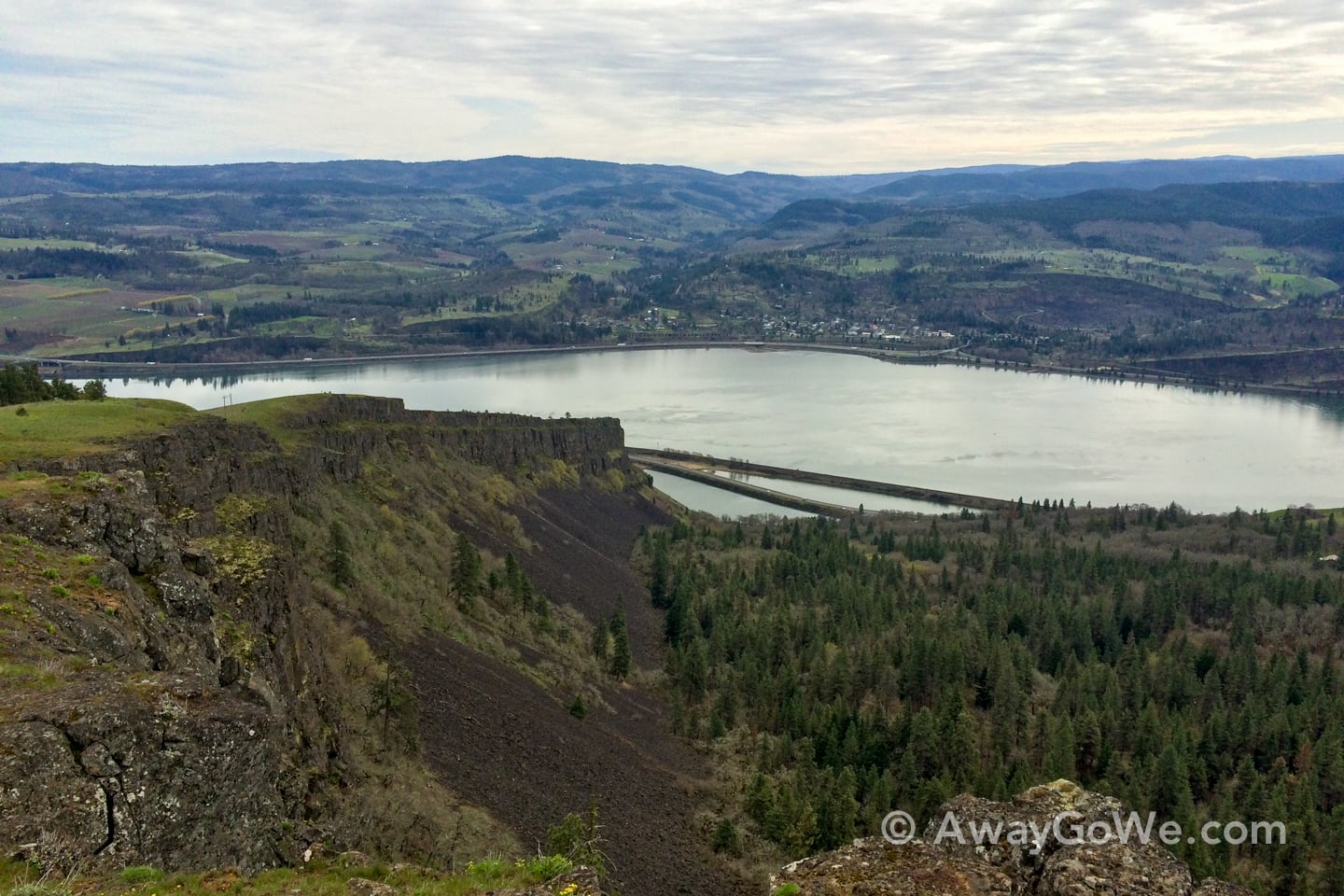 At approximately 1,700 feet, we found a nice place to rest and take in the view — which gave us about 1,500 feet elevation gain from the parking lot. That’s Coyote Wall, to the left, and the twin levees below carry the railroad and Highway 14. And, below, that’s Lori and the baby-bump. 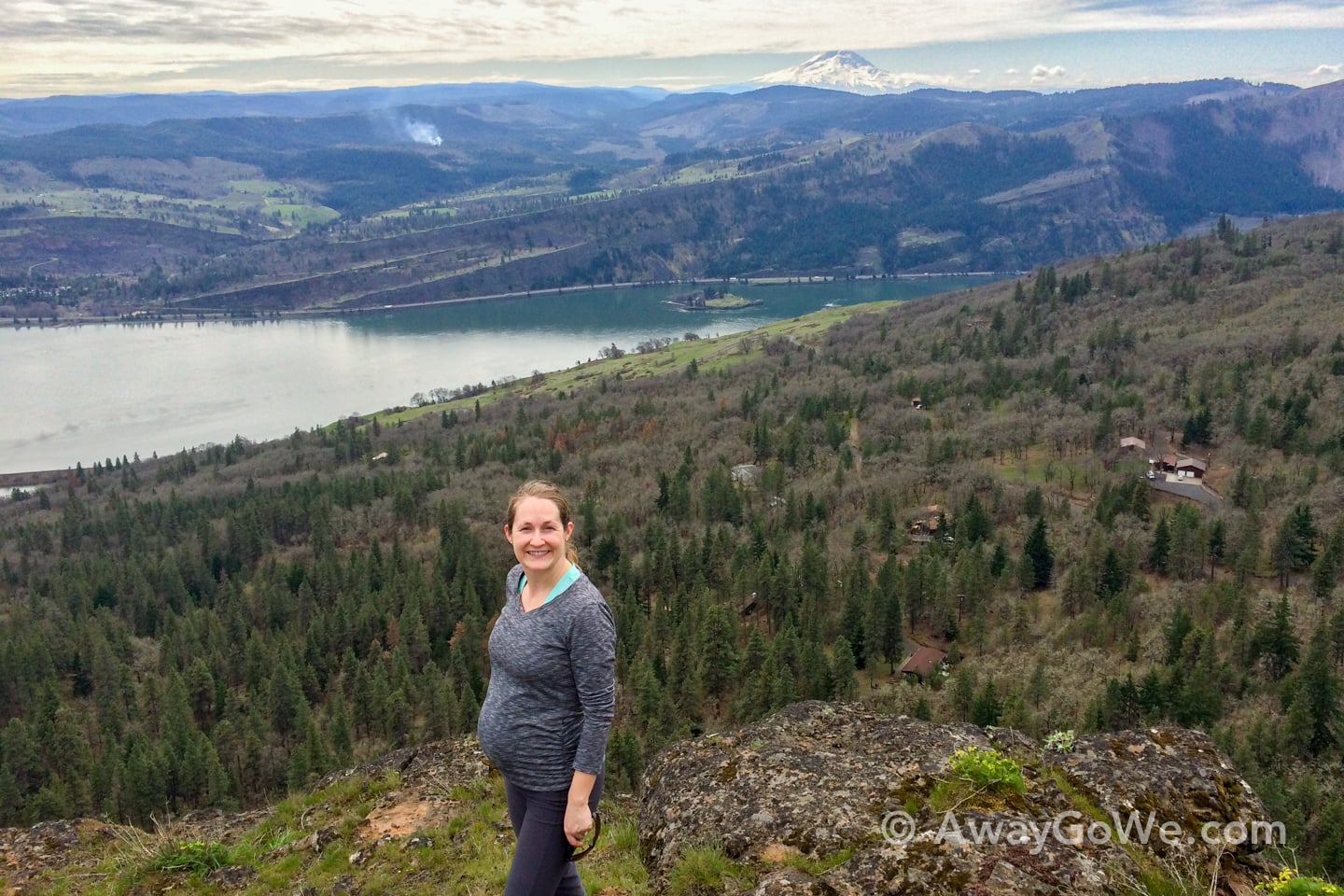 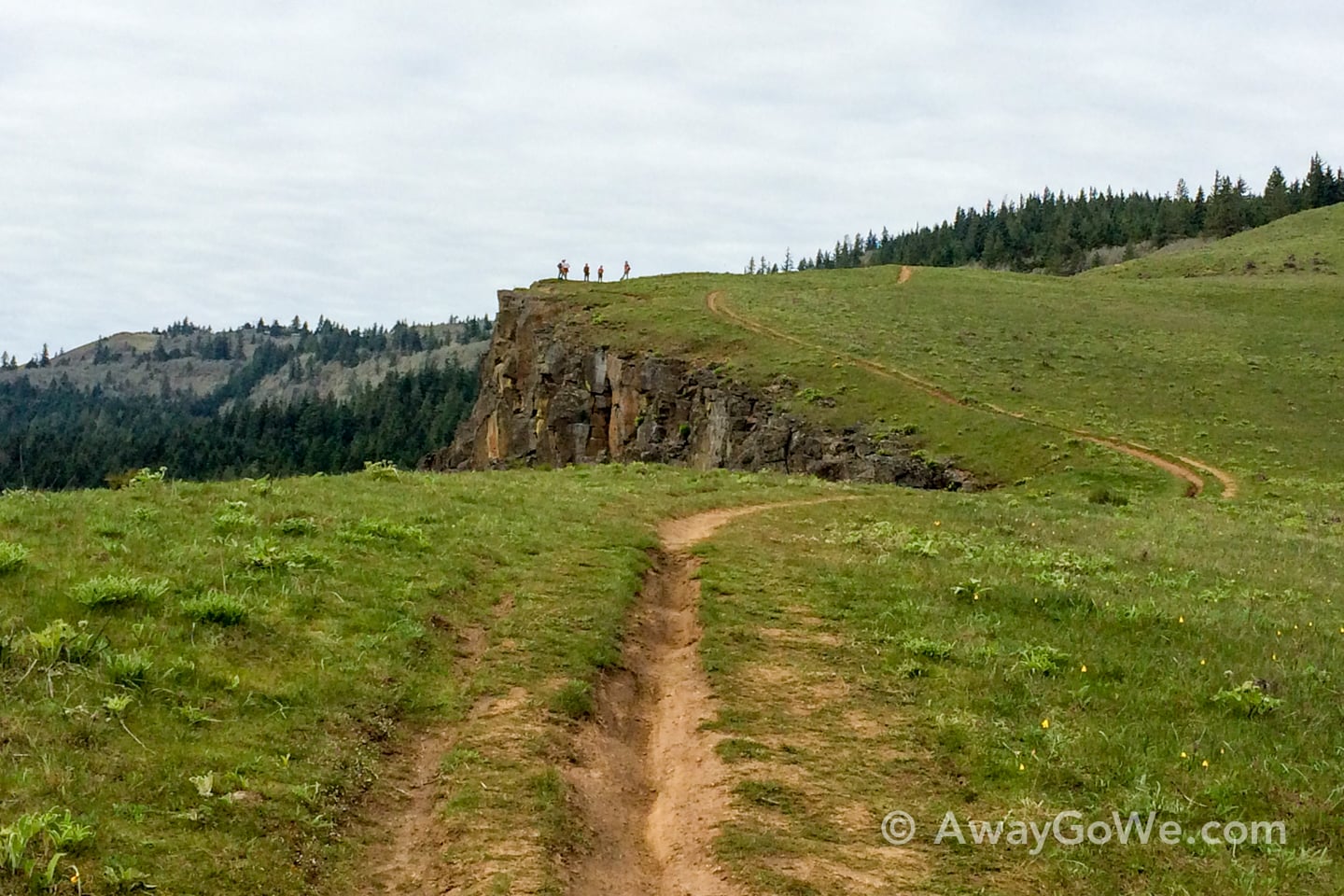 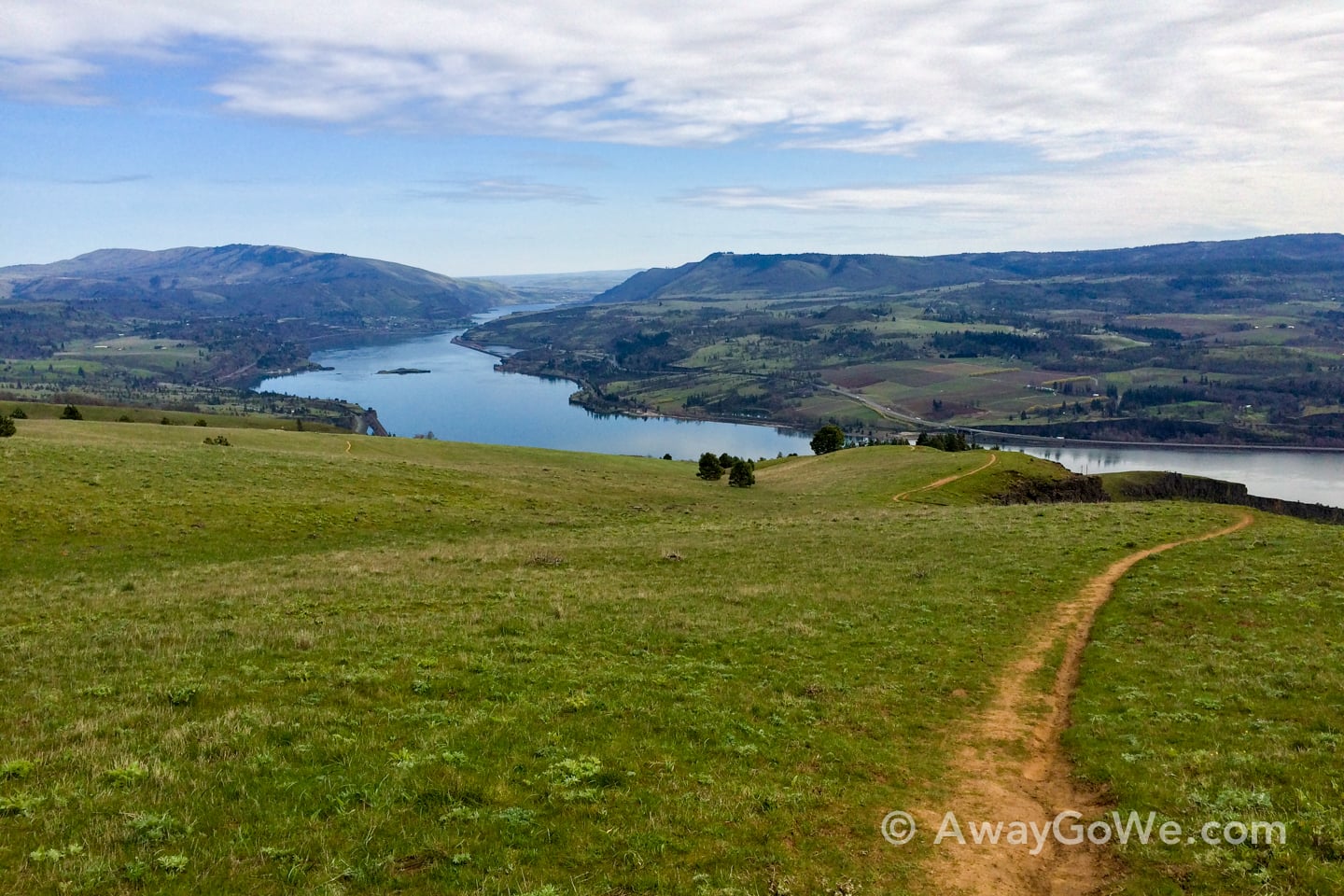 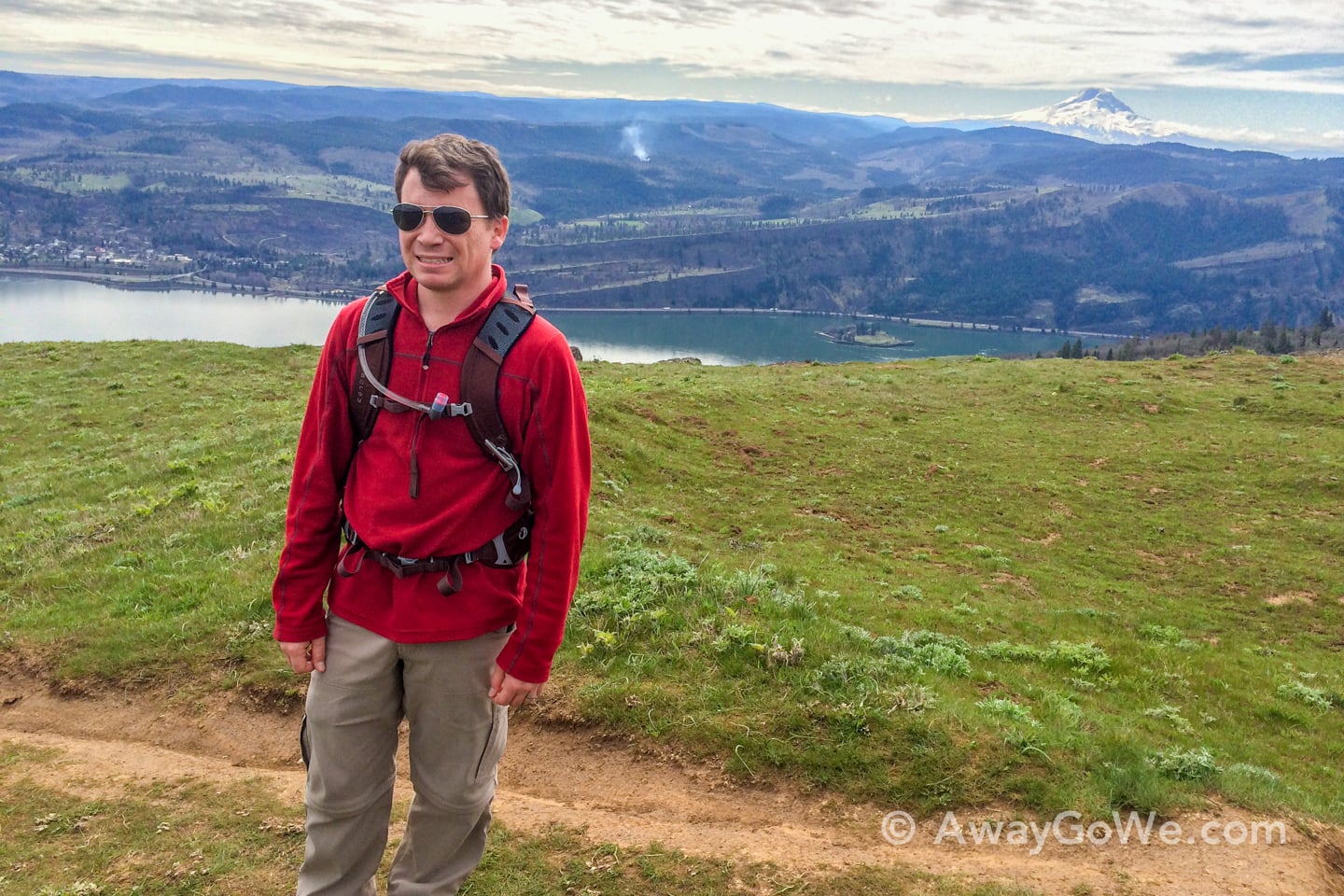 After ascending to the upper reaches of Coyote Wall, we turned around and headed for the Labyrinth. But not before finding ourselves in a leafless stand of trees we had not accounted for. We pressed on and soon found ourselves exiting a gate labeled PRIVATE PROPERTY! Oops. At least it gave my pregnant wife some urgently needed cover to give back to Mother Nature. 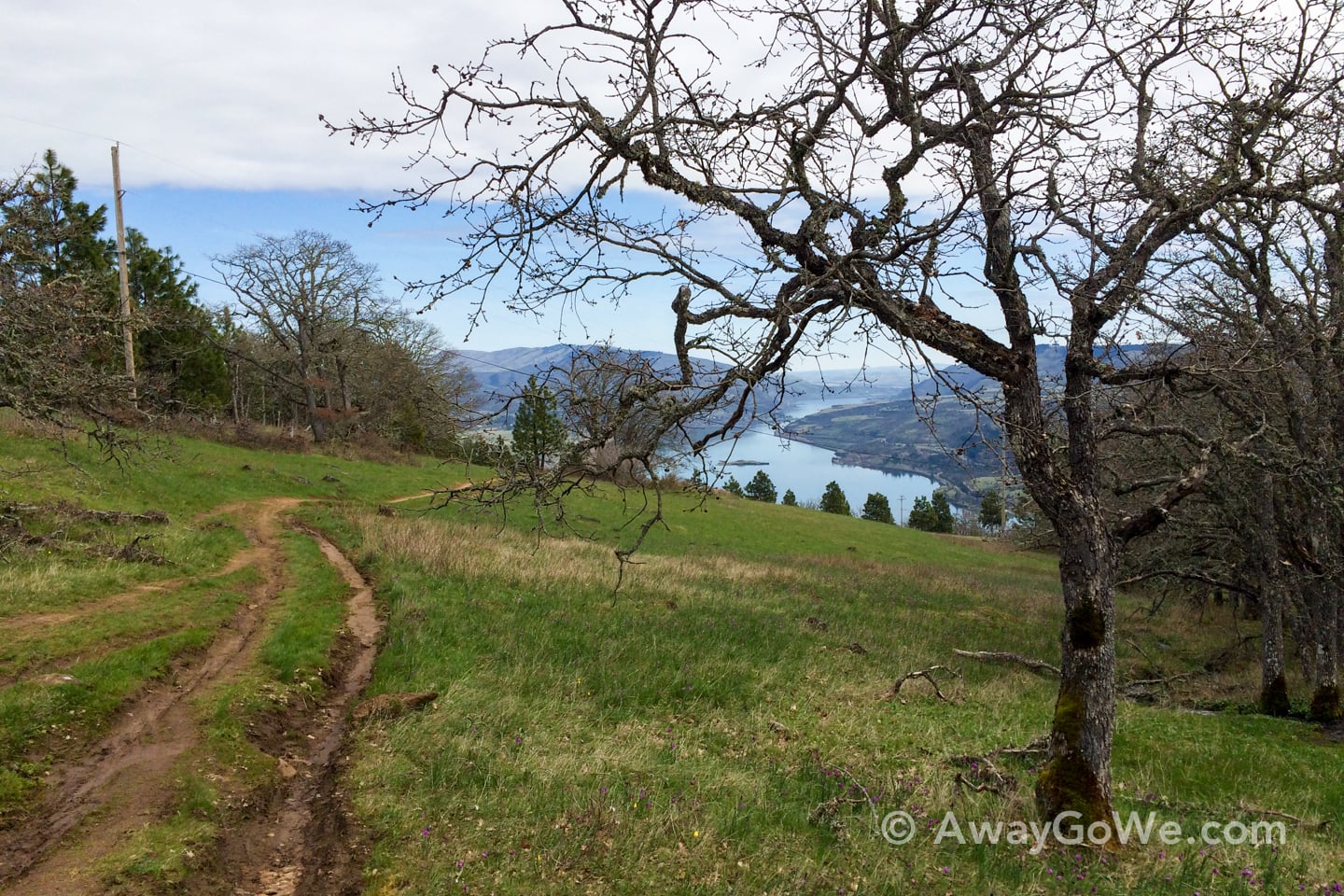 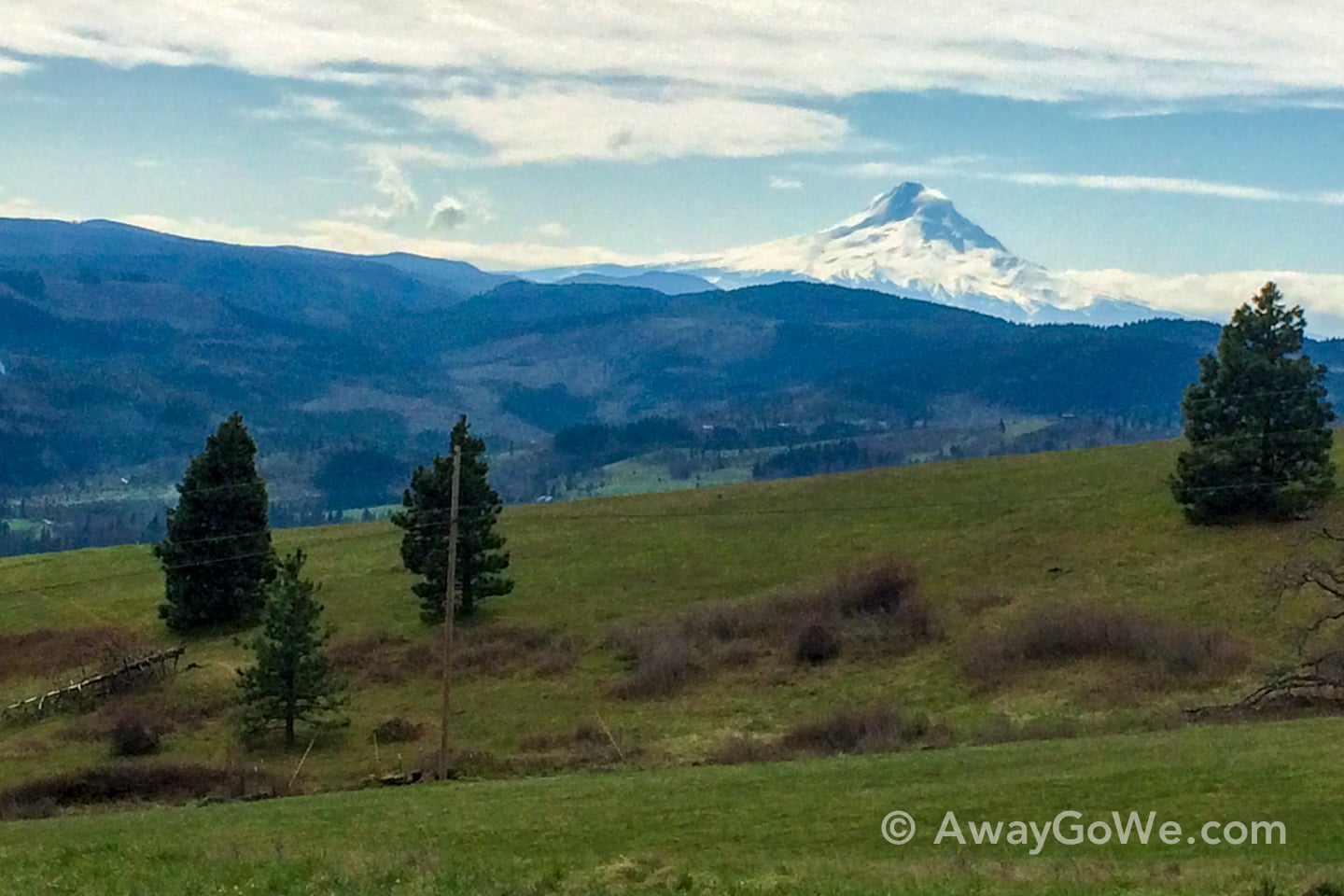 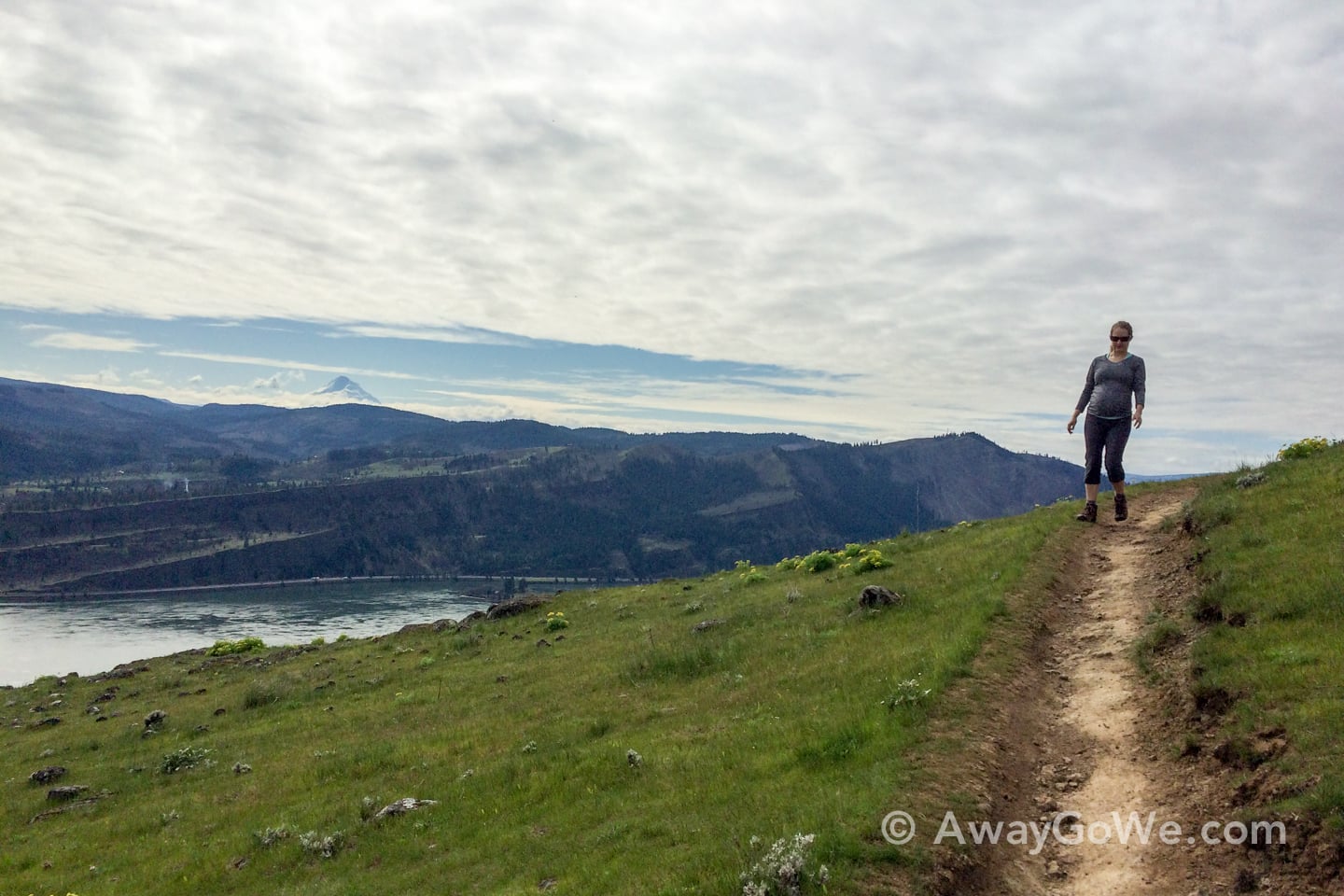 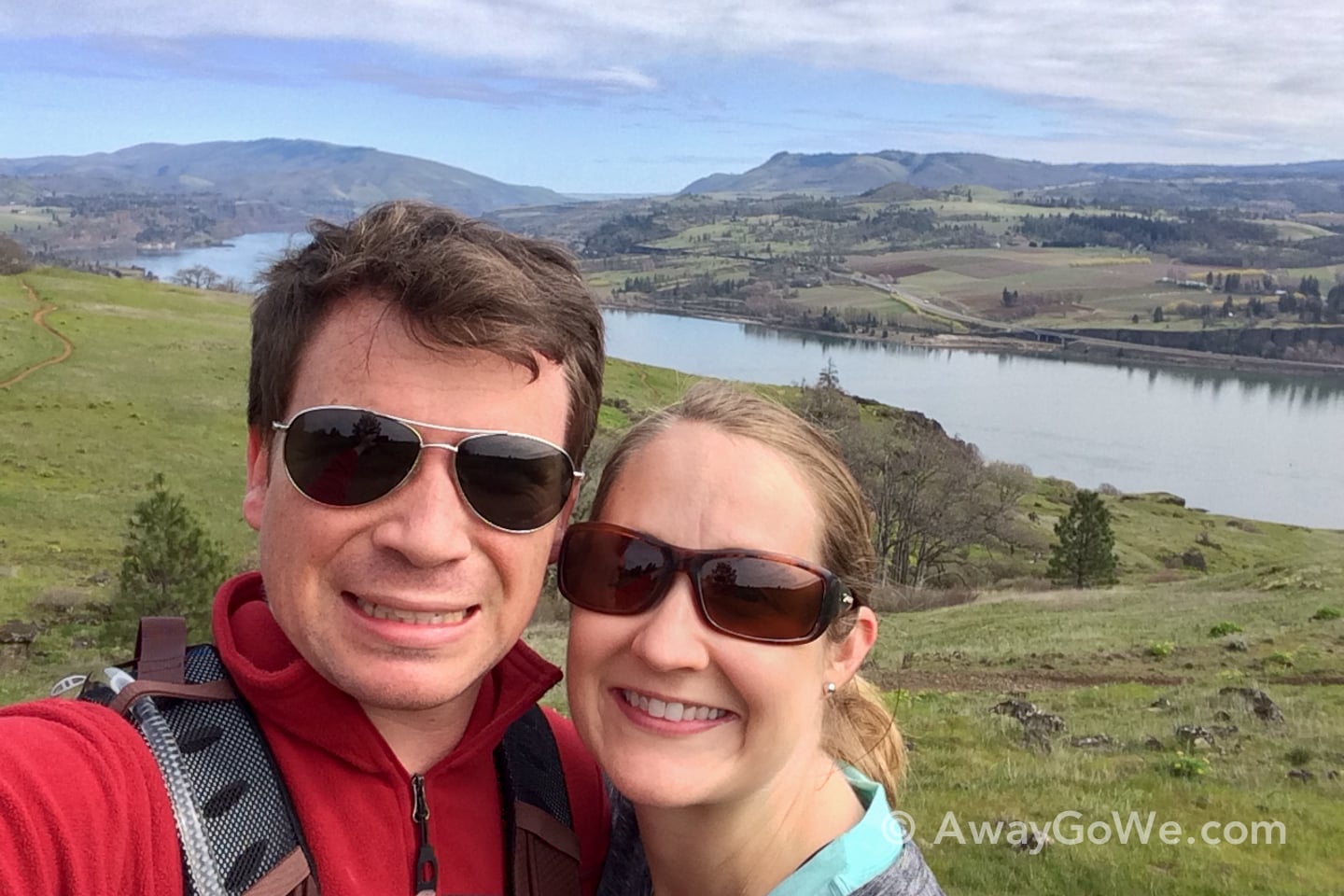 The Labyrinth is not a straight forward endeavor, hence its name I guess. We got lost, then lost again — but you’re never really lost because of the openness of the terrain (you can always see the river, and you know that the river is downhill). We followed a trail that became less and less of a trail until it vanished all together and we were staring down into this ravine. 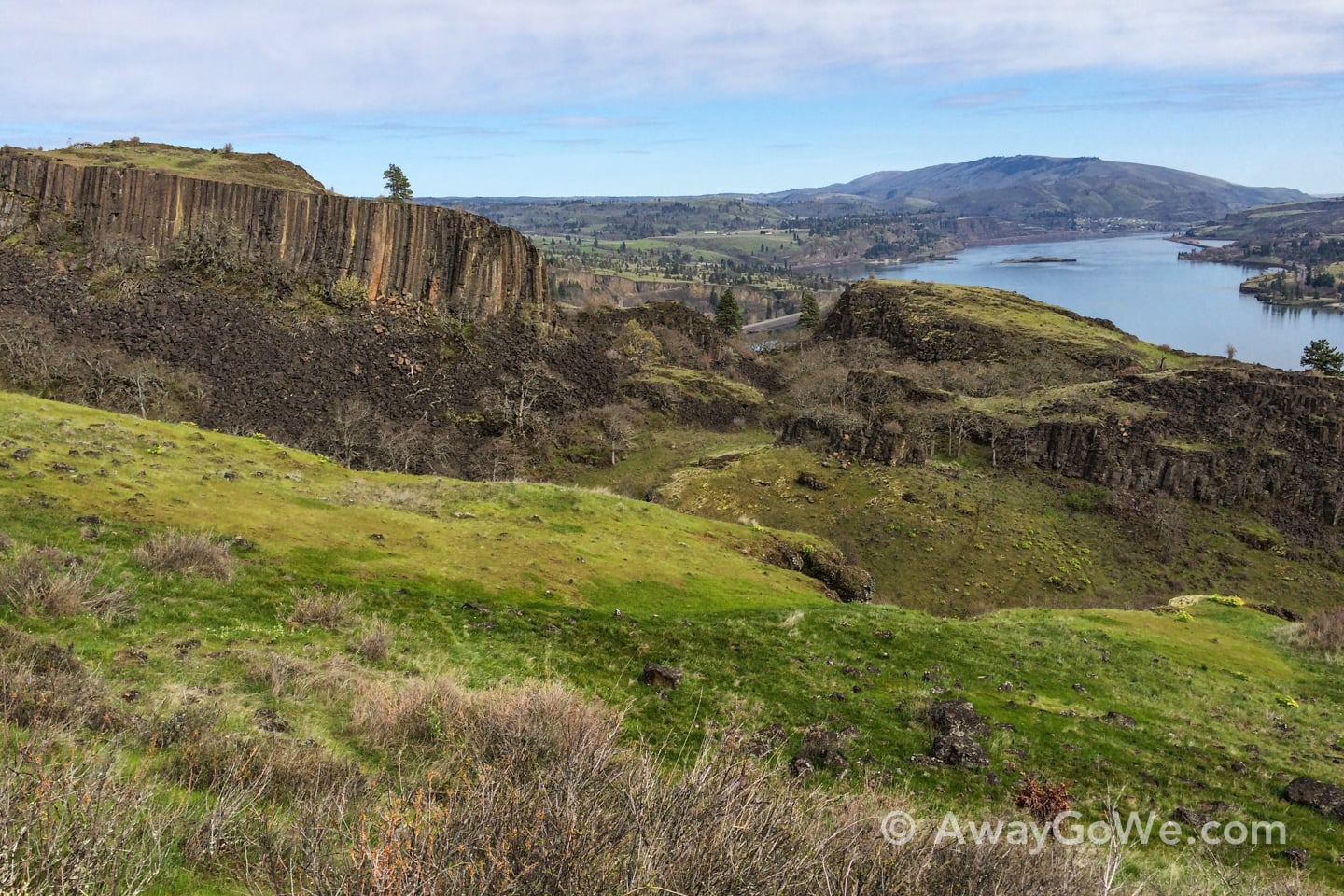 At that point, we decided to turn back and take another, much more clearly marked, route back to the Old Road. 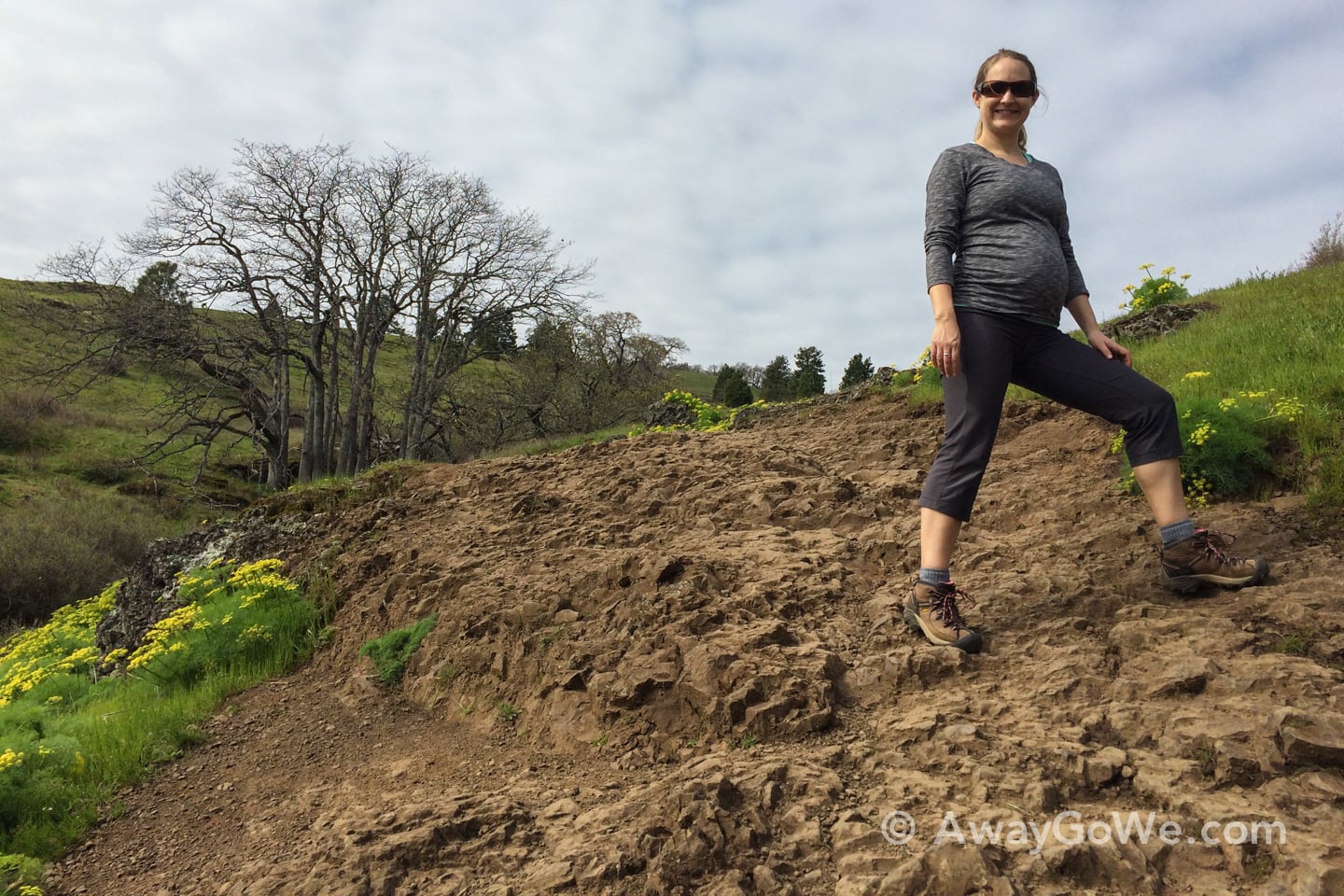 I was very proud of Lori for her efforts on this hike. The description said “Moderate,” but I’d say it’s Moderate-to-Strenuous, if only for the steady 1,500-foot climb to the top of the wall. We stopped for breaks (and hydrated) a bit more than pre-pregnancy, but it really didn’t seem like all that much for someone carrying 18 extra pounds up the side of a steep incline. 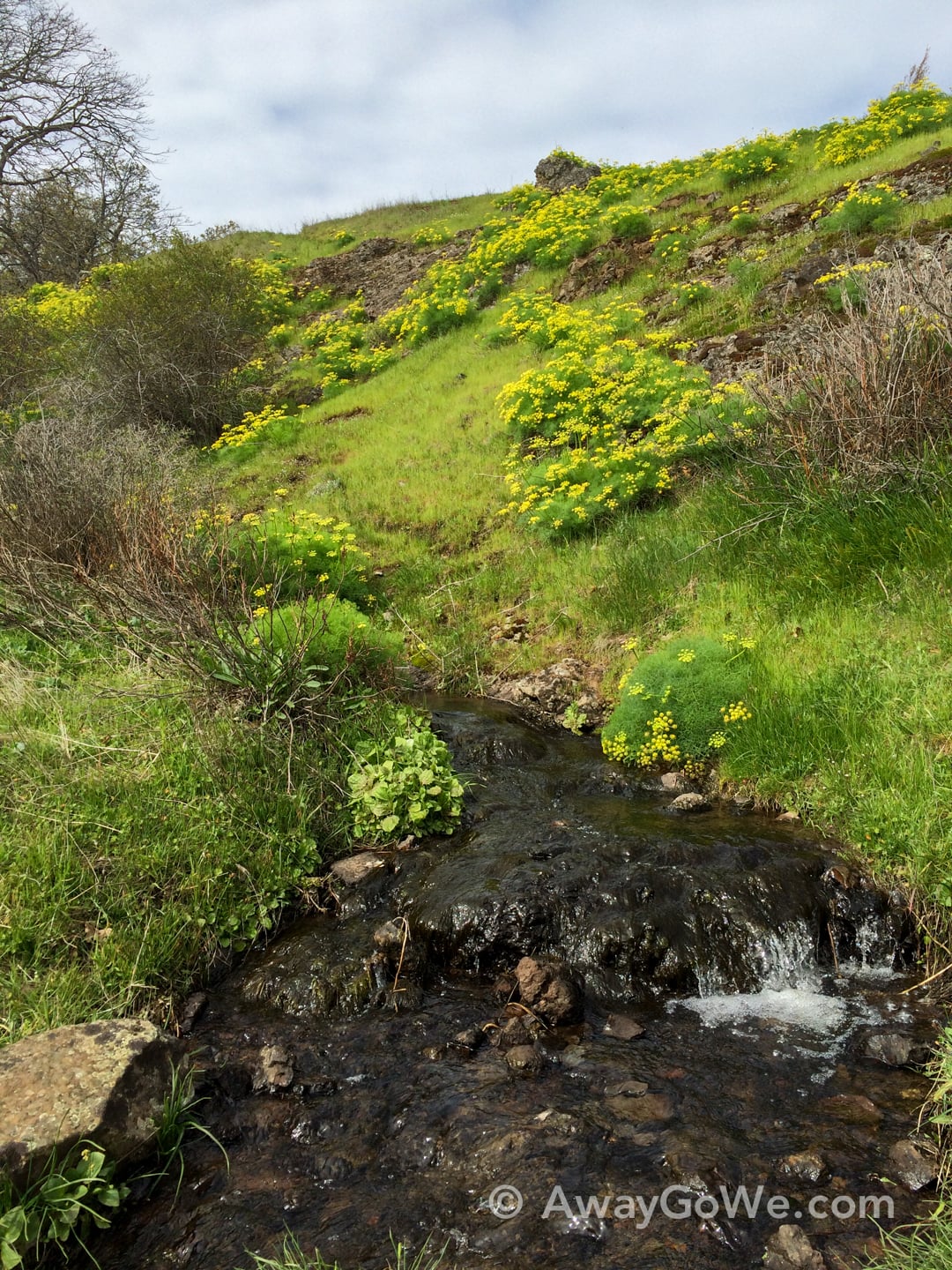 There were tons of yellow wildflowers all around, contrasting with the green and brown landscape — and a smattering of picturesque little falls as well. 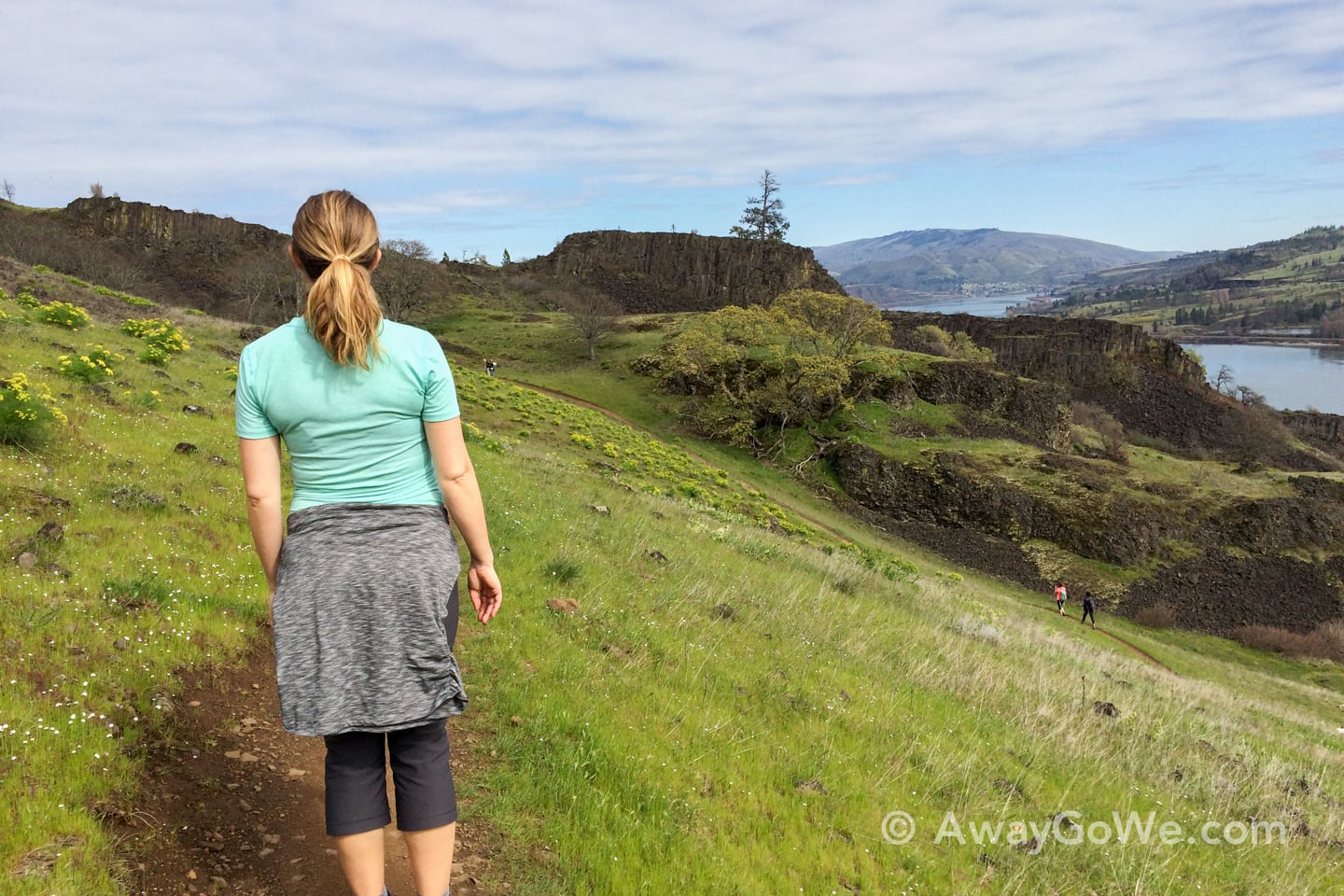 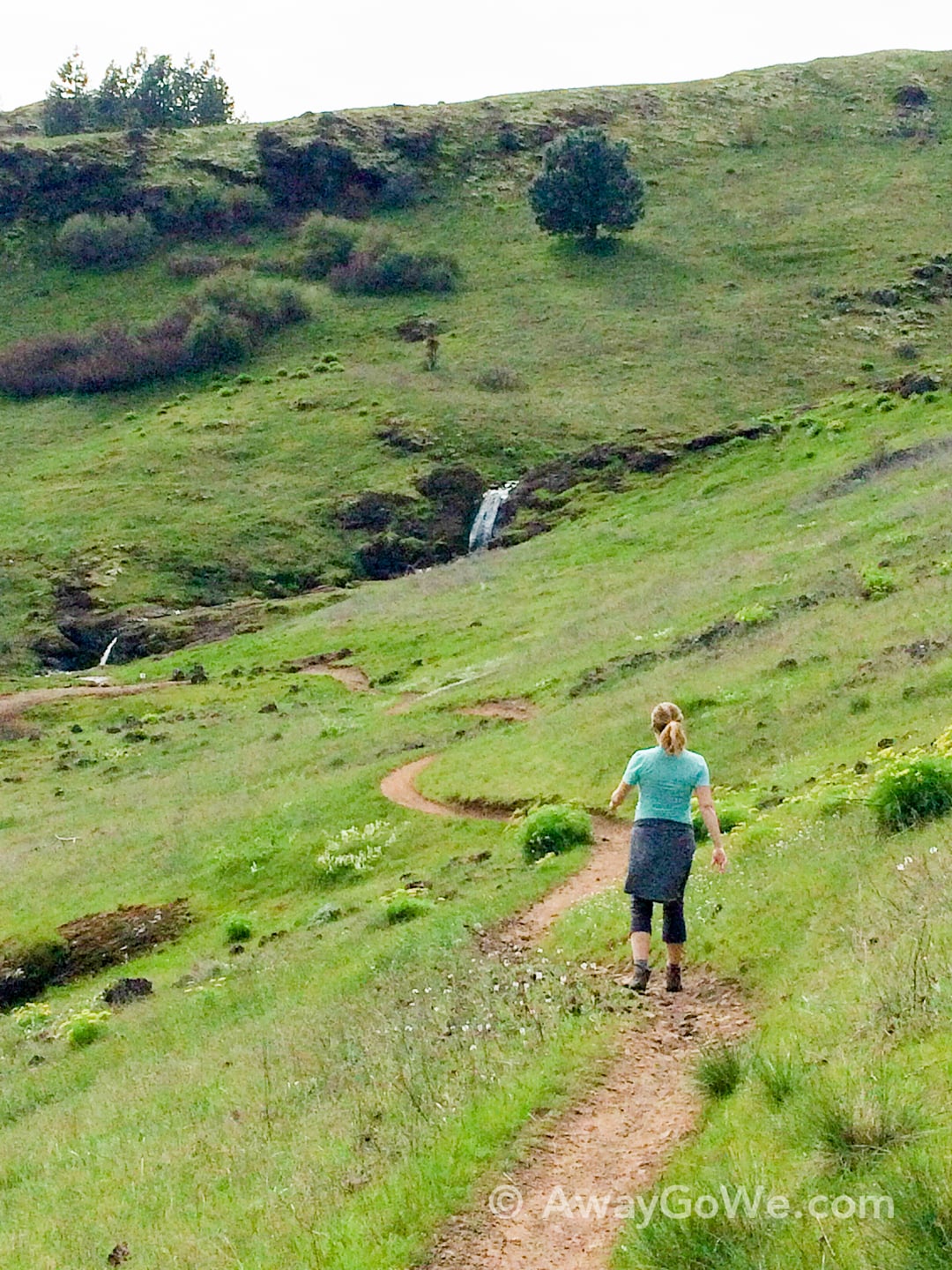 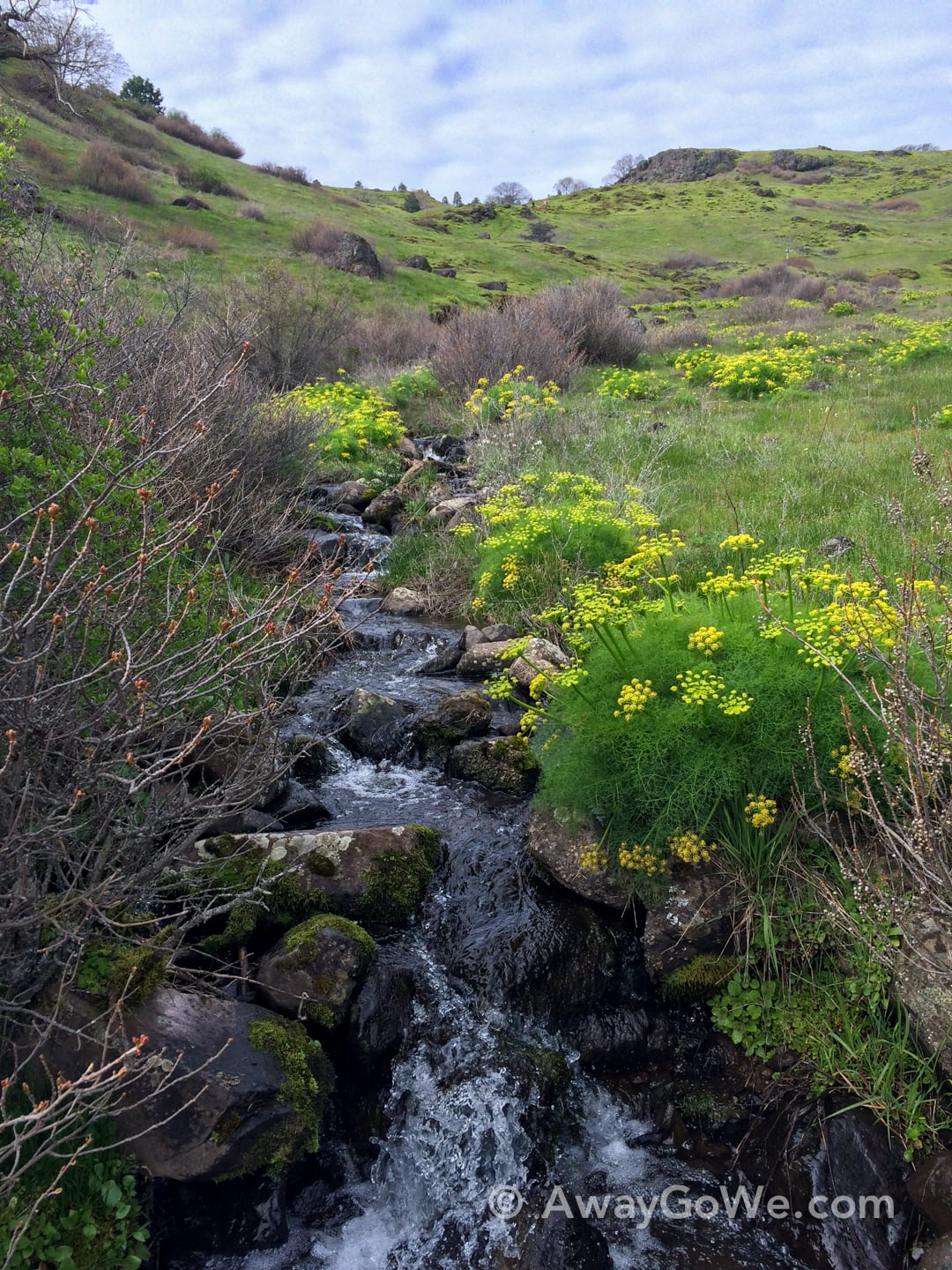 One of the best things about this hike was that it’s like a box of Forrest Gump’s chocolates…you never know what you’re going to get…which is surprising, given that there isn’t much blocking your view at any given point…until you crest a berm and encounter something completely unexpected. 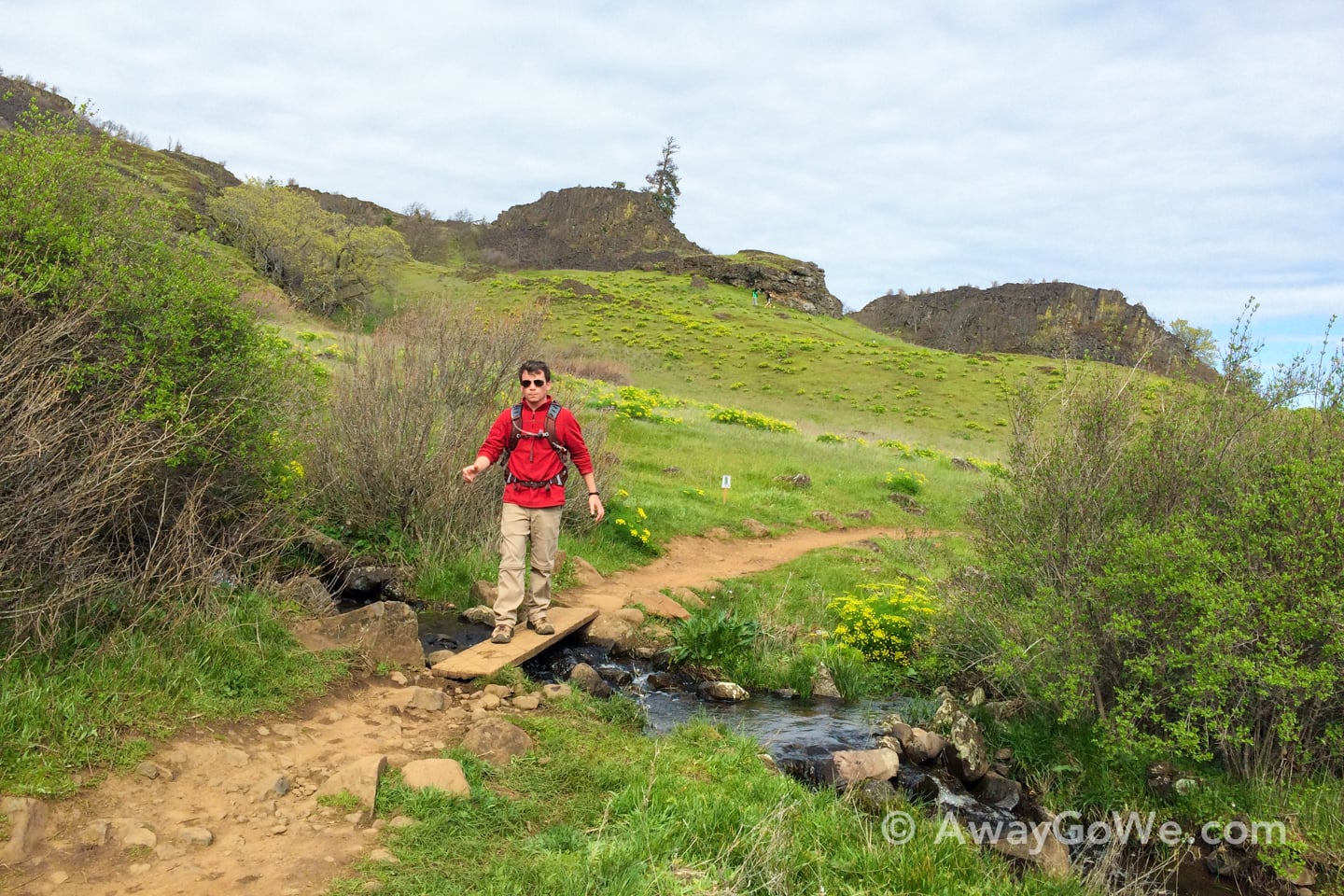 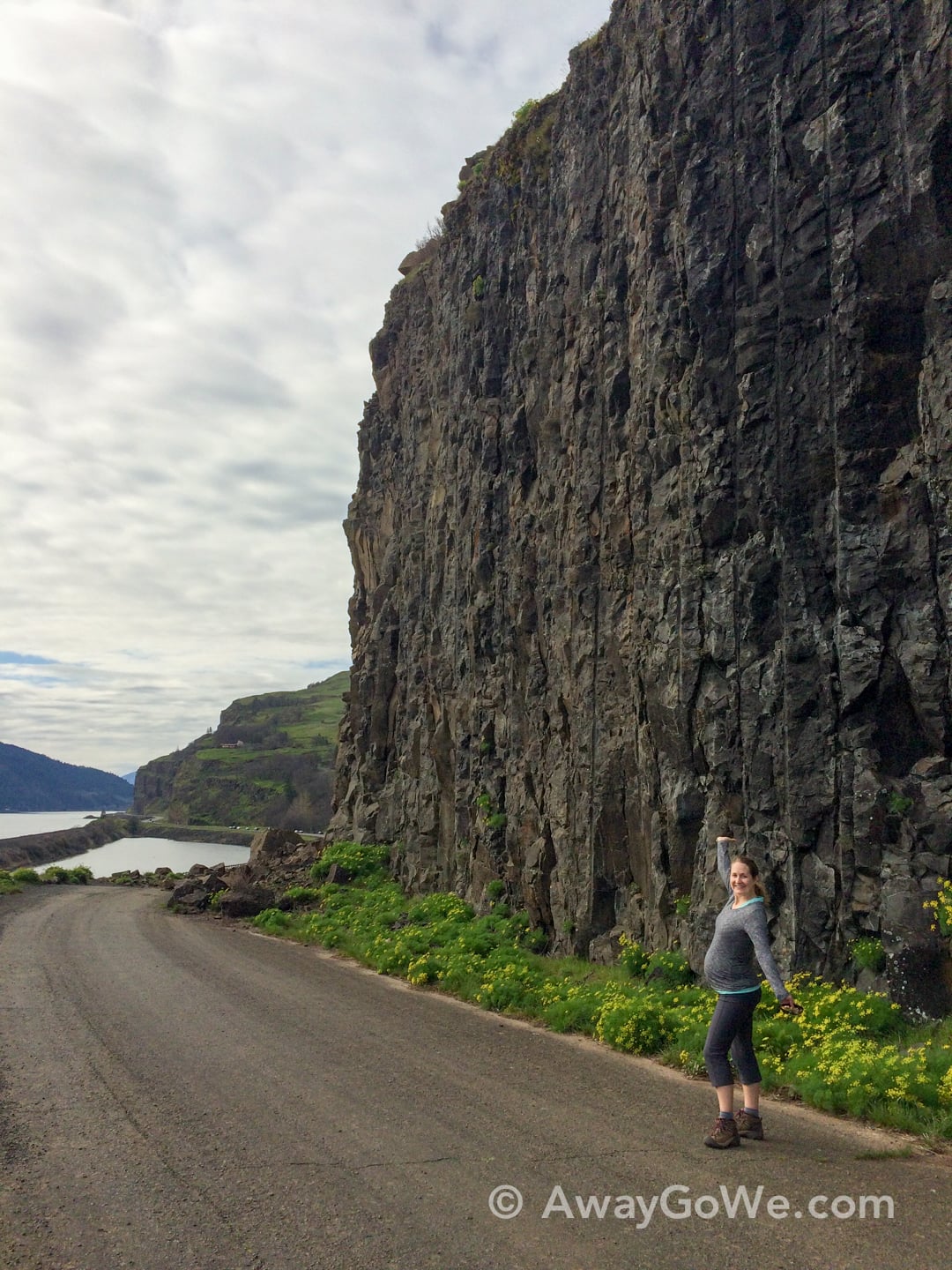 Leaving Coyote Wall and driving up to White Salmon for a burger at Everybody’s Brewing, I had my window down (on account of the amazing weather) and heard something unsettling. Clink. Clink. Clink.

After parking, I inspected the front driver’s side tire and discovered a large nail. We spent the next half hour eating and calling around to all three places in the White Salmon/ Bingen/ Hood River area that might be able to fix a flat after 5pm. Of course there were none, which meant we’d have to beeline it to the Hood River Les Schwab after finishing our meal in hopes of making it before 5pm. Which we did, by about 5 minutes. They were quick and had us back on the road in less than 10 minutes.

I do have to say though that it is a bit unsettling to drive over the Hood River bridge, which is a little under a mile in length, 9 feet wide from center to guard rail, and metal grating the entire way — and to hear the clunk, clunk, clunk of the nail hitting the grating over and over, knowing at any minute that the grating could yank the nail from the tire and cause all sorts of problems. Good times. But we made it. And to top it off, Lori got a killer prego photo with our tire before it went back on the car. 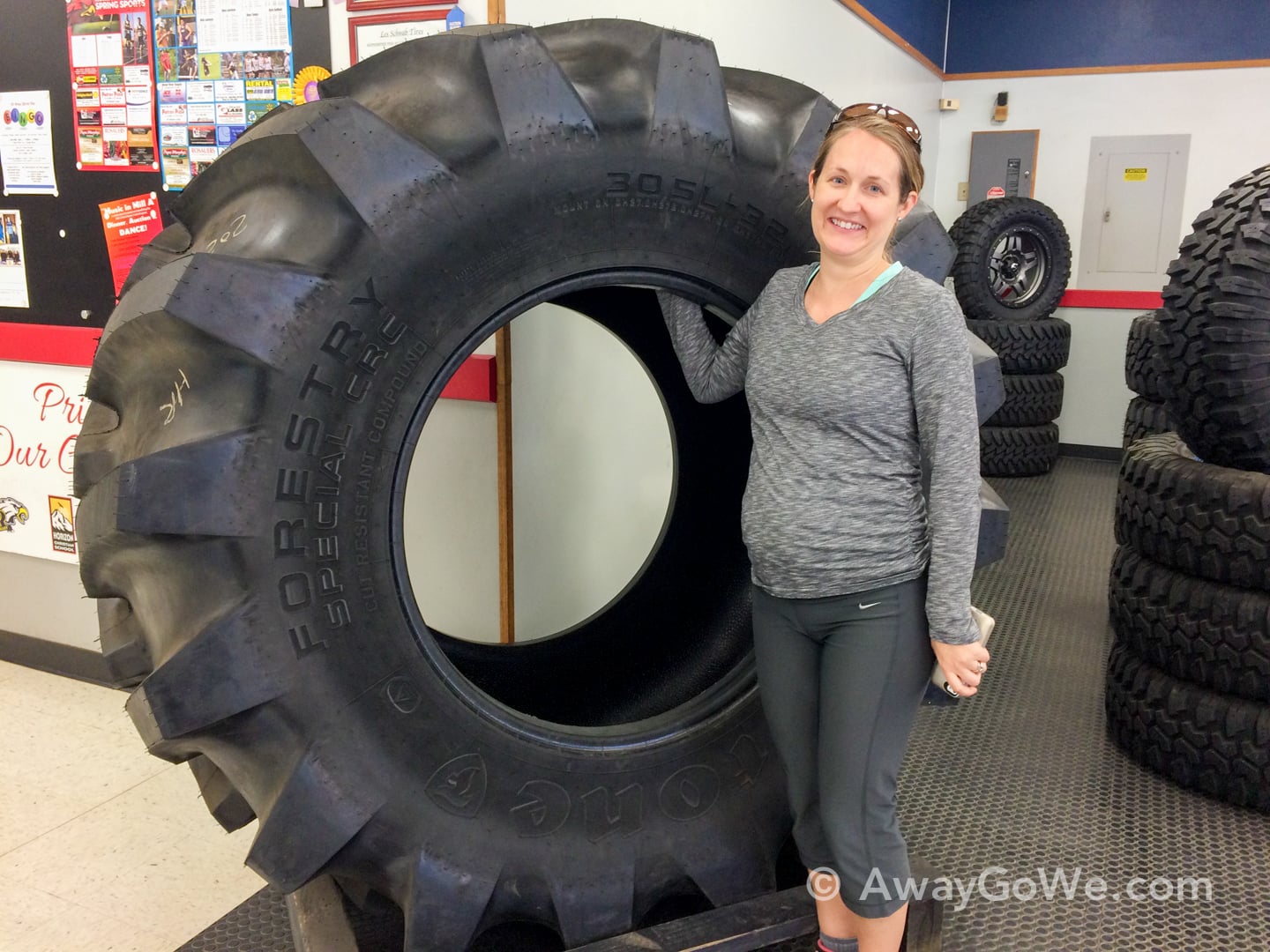 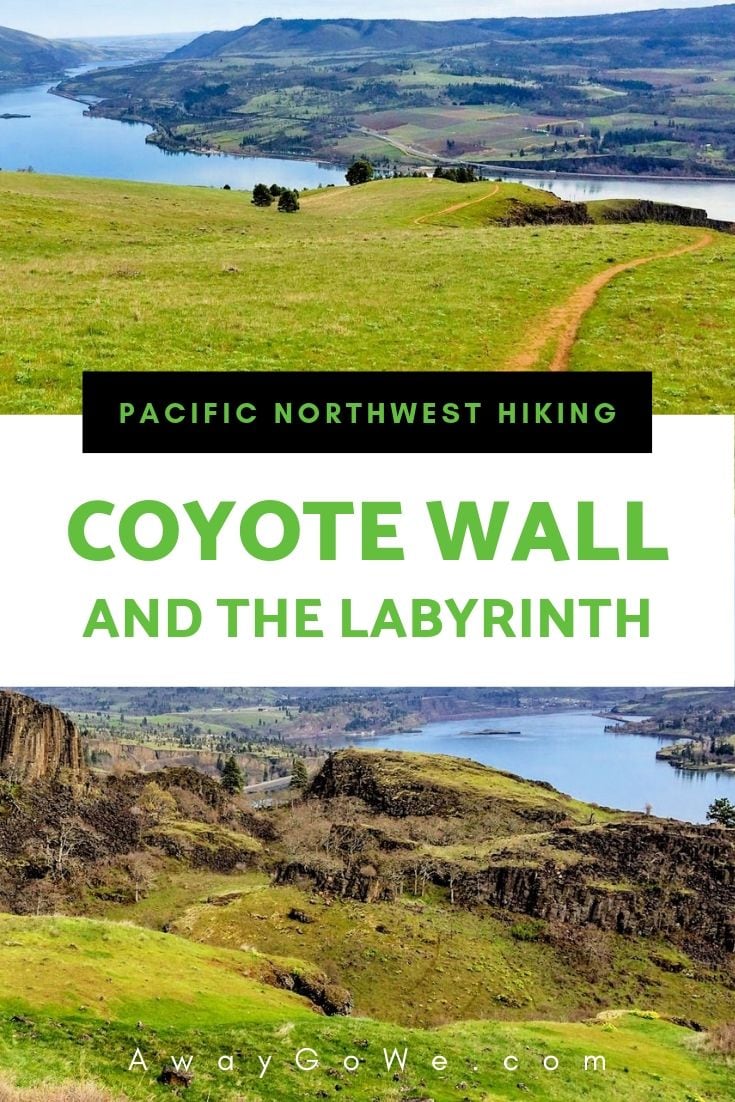