The next morning, after a full day of exploring the John Day Fossil Beds National Monument, including the awe-inspiring Painted Hills, we broke camp, packed up the car, and headed deeper into Eastern Oregon […]

The next morning, after a full day of exploring the John Day Fossil Beds National Monument, including the awe-inspiring Painted Hills, we broke camp, packed up the car, and headed deeper into Eastern Oregon, taking in the scenic and historical sites along the way. 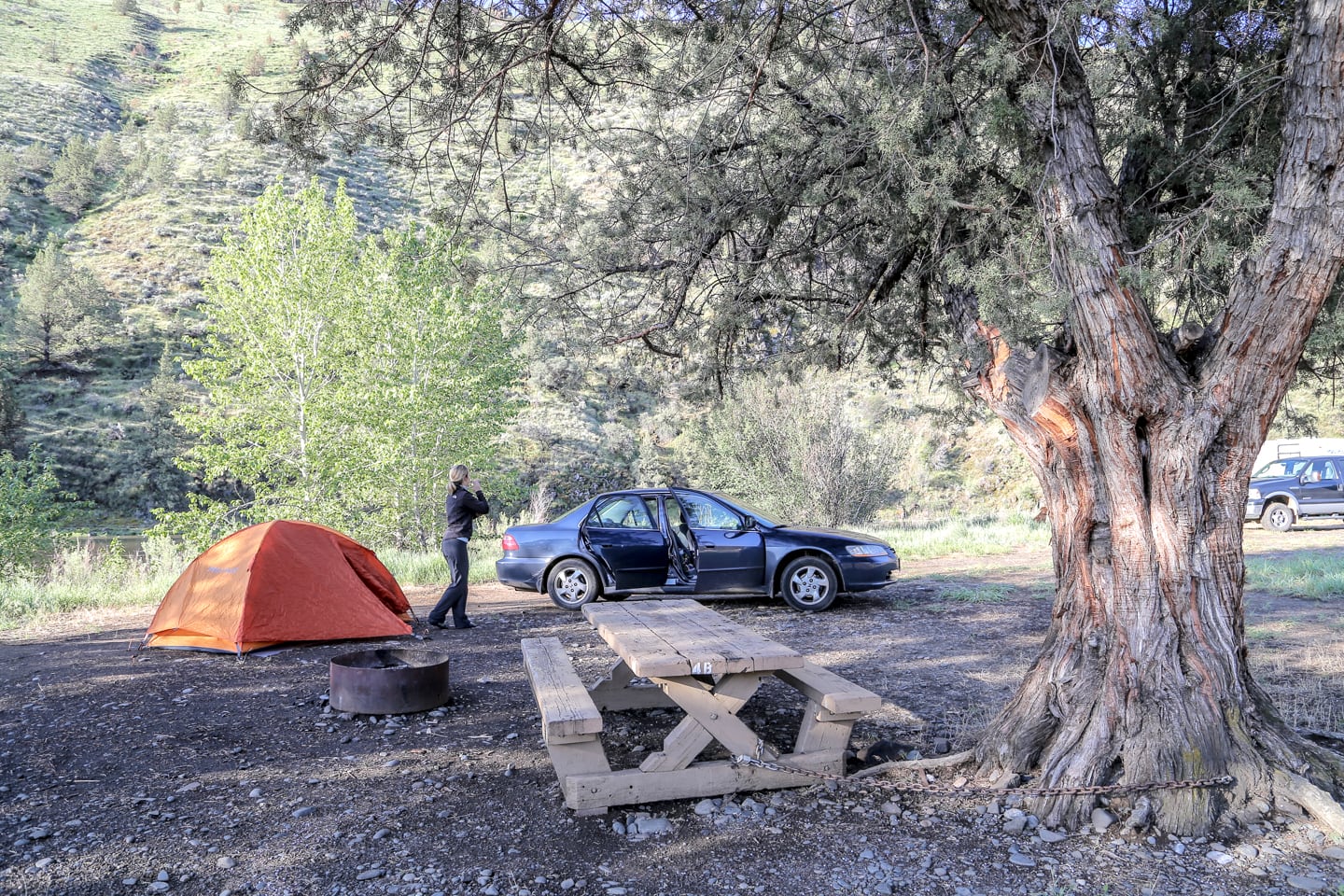 We really enjoyed our stay at Big Bend BLM campground just outside of Kimberly, Oregon (not to be confused with Big Bend National Park, of course). While campsites offer little privacy, there are only about half a dozen liberally spaced along a large bend in the North Fork of the John Day River. Campsites offer fire pit, picnic table, vault toilet AND are just $5 per night! 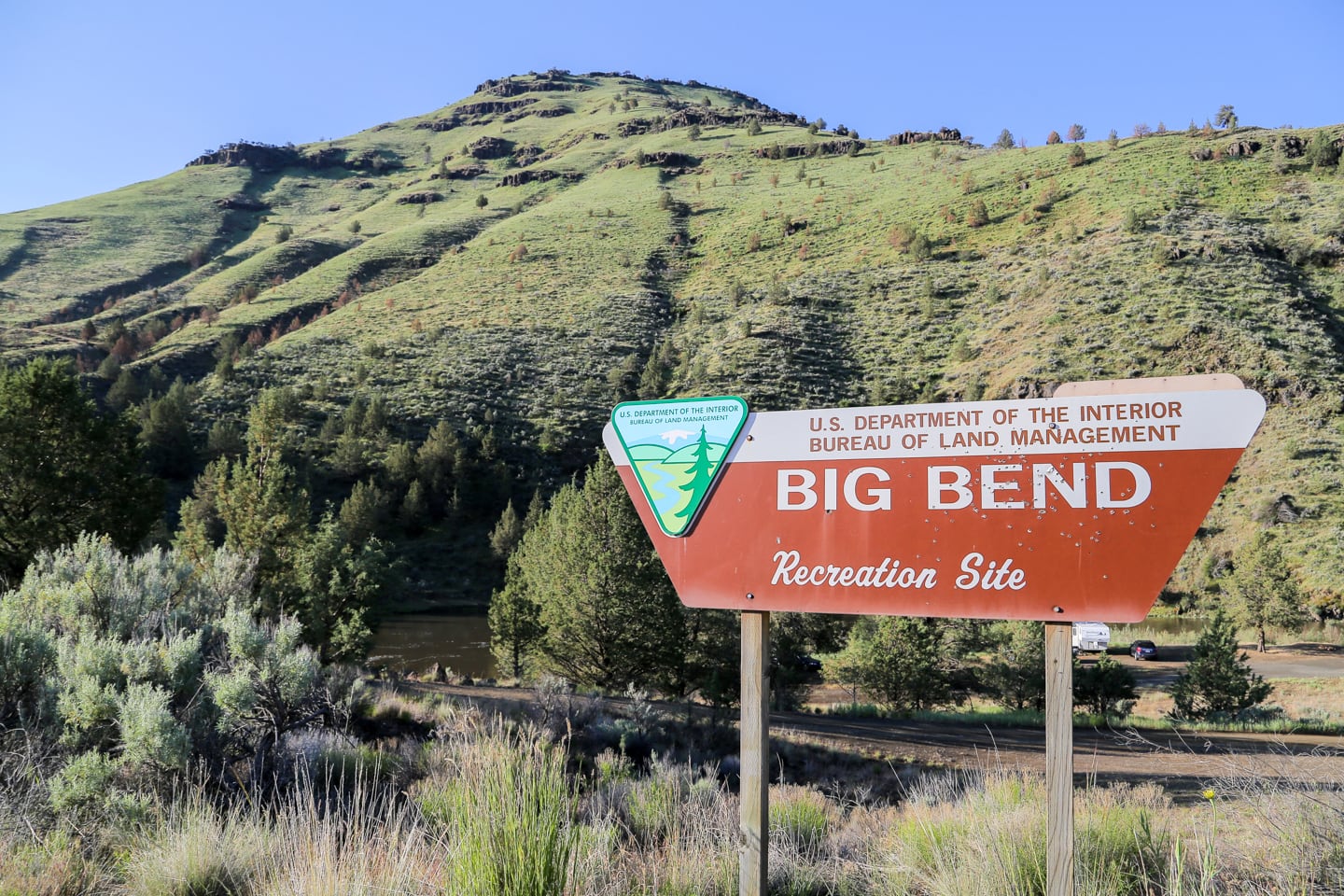 But make sure you gas up before you make it out to these here parts. We fueled up in The Dalles and hoped that would get us to John Day (town). Due to our campground shuffling the day before, however, we found the Honda uncomfortably empty on the fuel front. We saw on our map that the next town on our route, Monument, had fuel listed, but were uncomfortable putting all our eggs in that basket given that there was nothing beyond Monument for a very long time. Luckily, Kimberly (a small settlement a few miles backtracking) has a single pump at their general store which is NOT indicated on any maps we had. So if you happen to find yourself low on fuel traveling through the John Day Fossil Beds and don’t think you can make it all the way out to John Day town, there ya go. 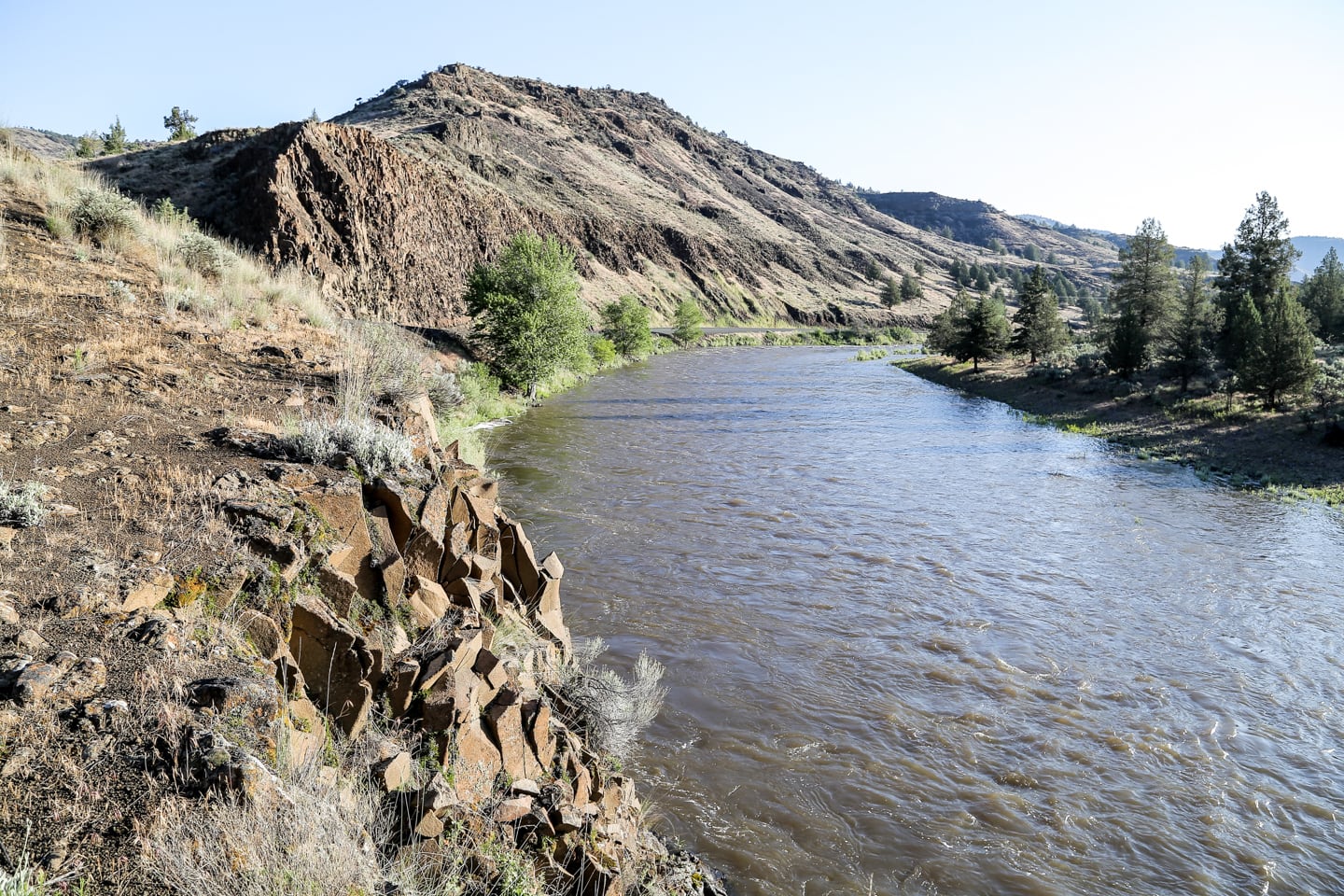 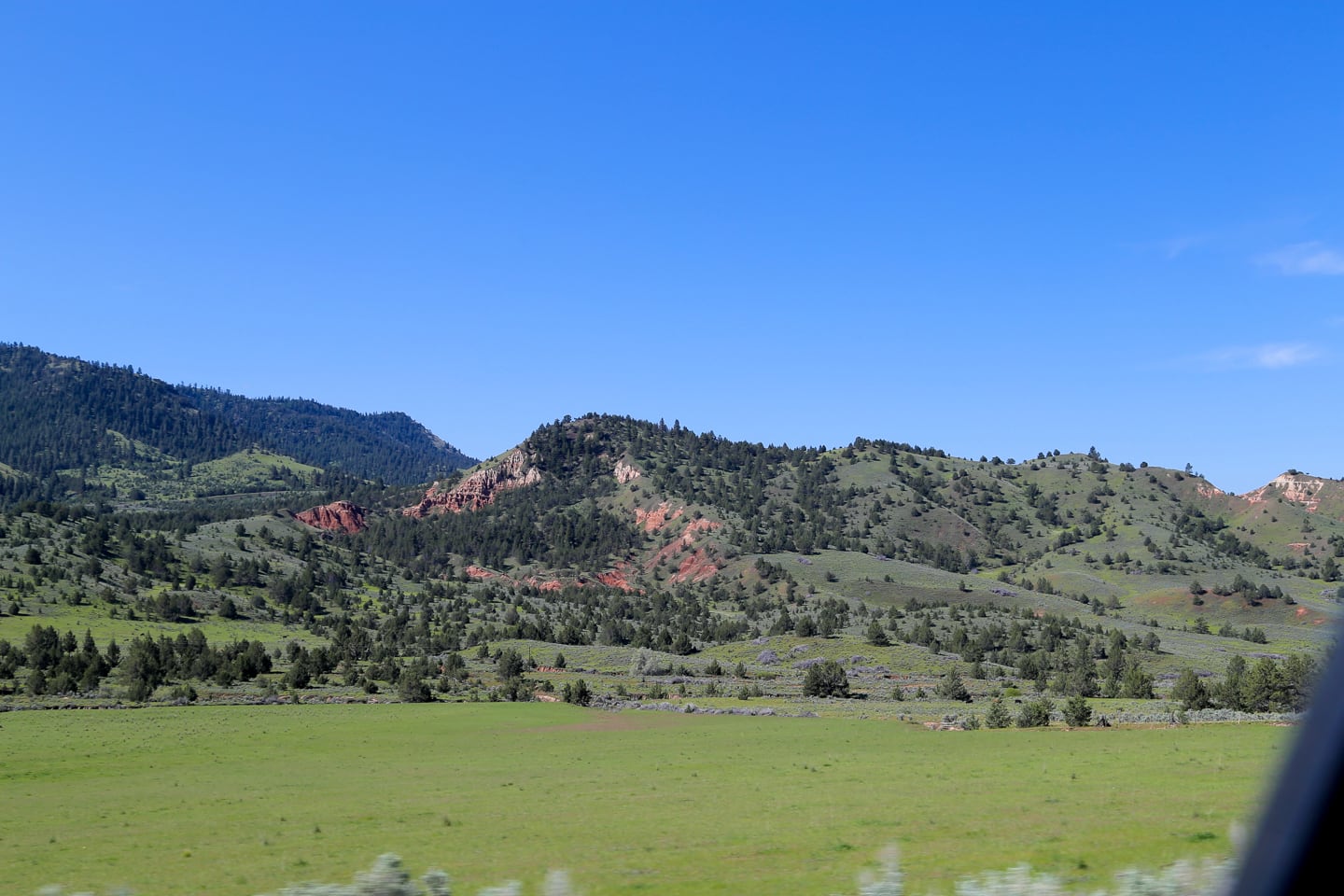 What surprised us the most about this part of Oregon was how green everything was. The region had just received an unseasonably large amount of rainfall the previous week, but even so, we did not realize there would be so many fir trees. Growing up west of the Cascades, I always assumed that “High Desert” meant High Desert (i.e. shrubs, grasslands, rolling plateau hills), but as you can see in the photos above and below, that’s hardly the case for much of the area. 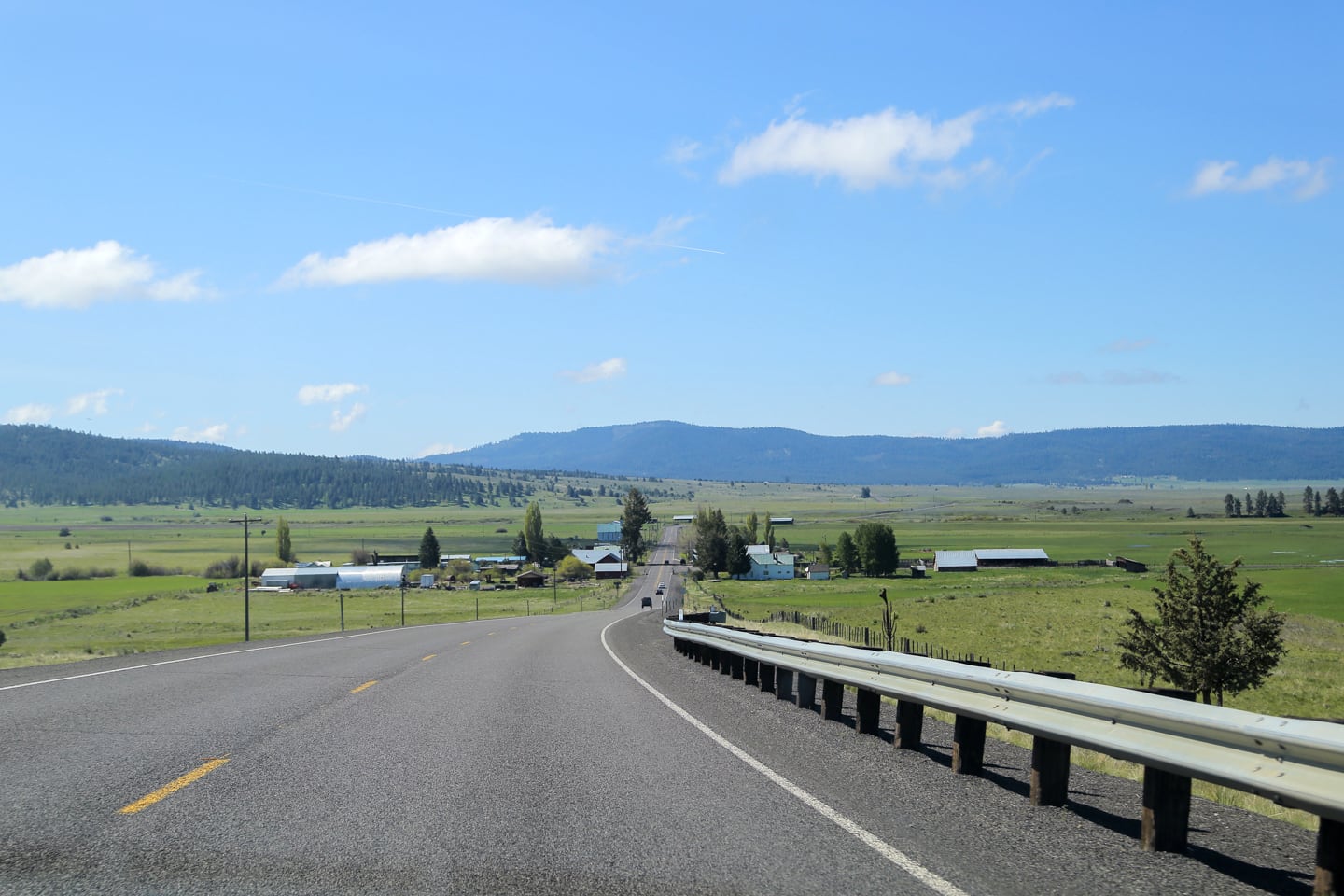 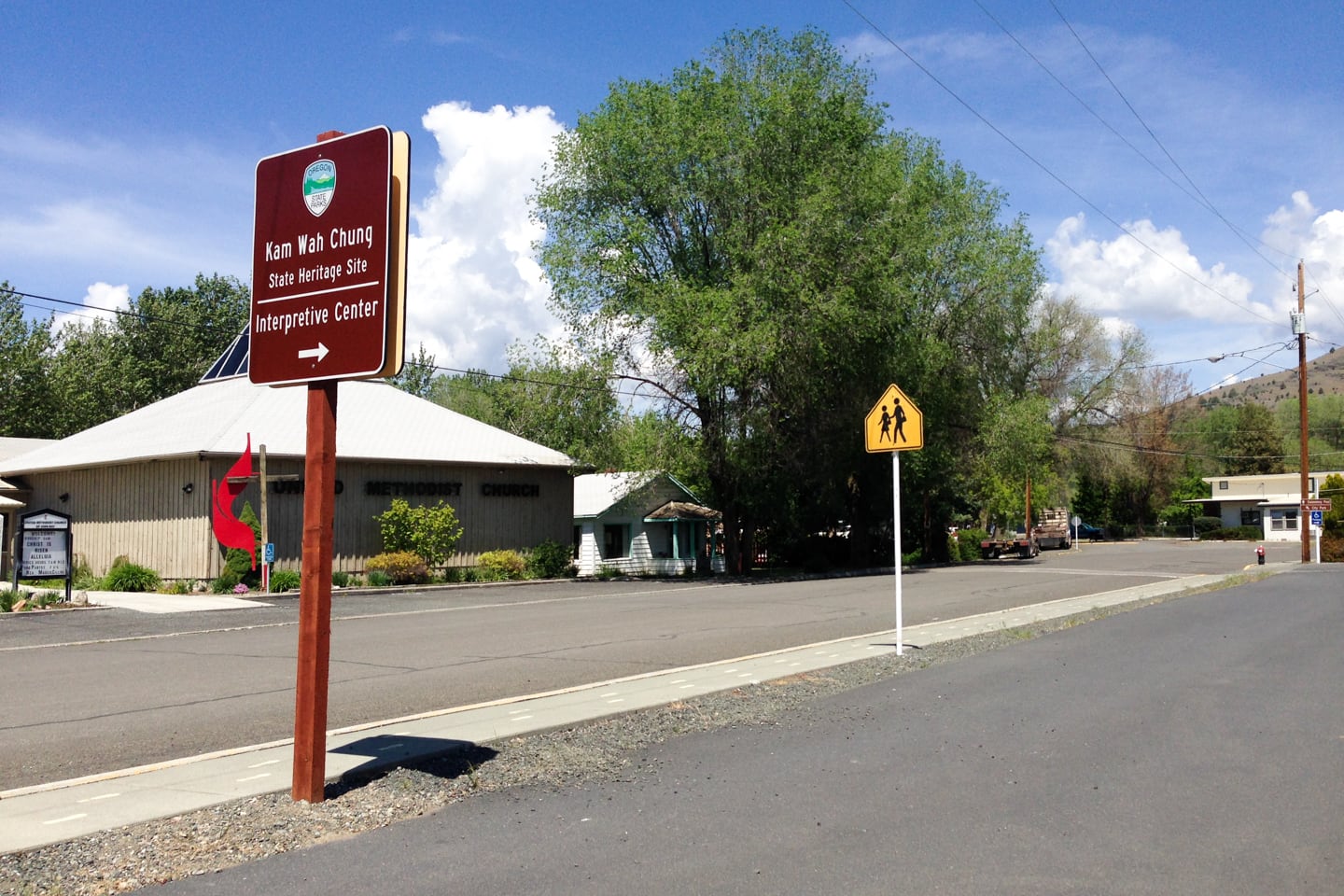 We arrived in John Day town around noonish, where we grabbed a quick lunch and restocked our propane/butane canister at the local Ace hardware. We were surprised to learn about the Kam Wah Chung heritage site (above and below) in this fairly out-of-the-way outpost. Apparently, the John Day area was home to the SECOND LARGEST CHINATOWN IN THE U.S. in the 1800s who had been attracted by the gold rush. Over a thousand Chinese emigrants lived in the area at the height of the rush. Kam Wah Chung (below) was an apothecary operated from the 1860s to the 1950s by two Chinese brothers, and now serves as a museum preserving items from Chinese-American culture in the Western U.S. 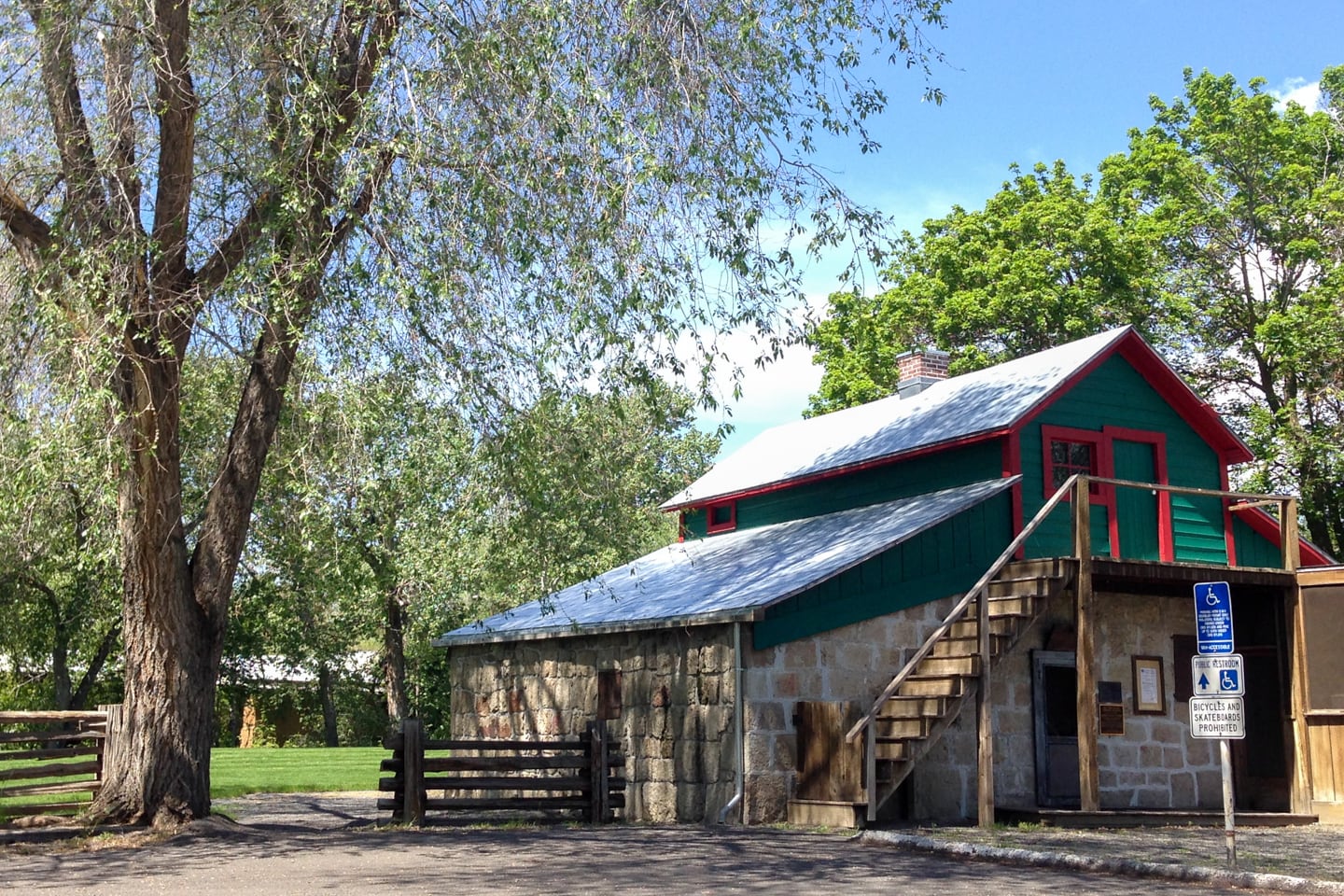 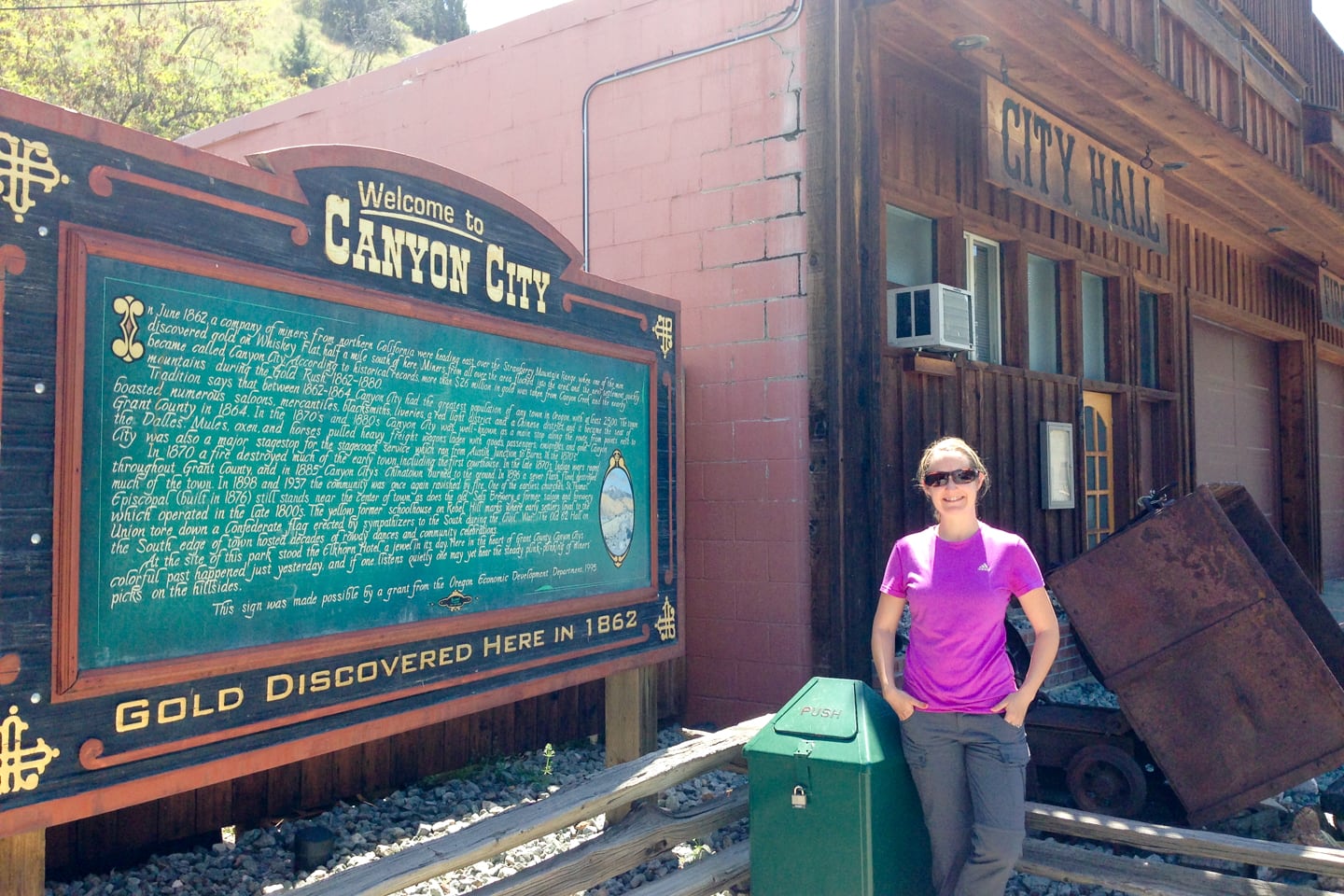 On one of Lori’s dad’s many recommendations for things to see and do in Eastern Oregon, we stopped at Jim’s Antique Shop (and Vacuum Repair) in Canyon City. Unfortunately, the antique shop (like everything else in town) was closed on Sunday, but that didn’t stop us from walking up and down the main drag a couple of times. 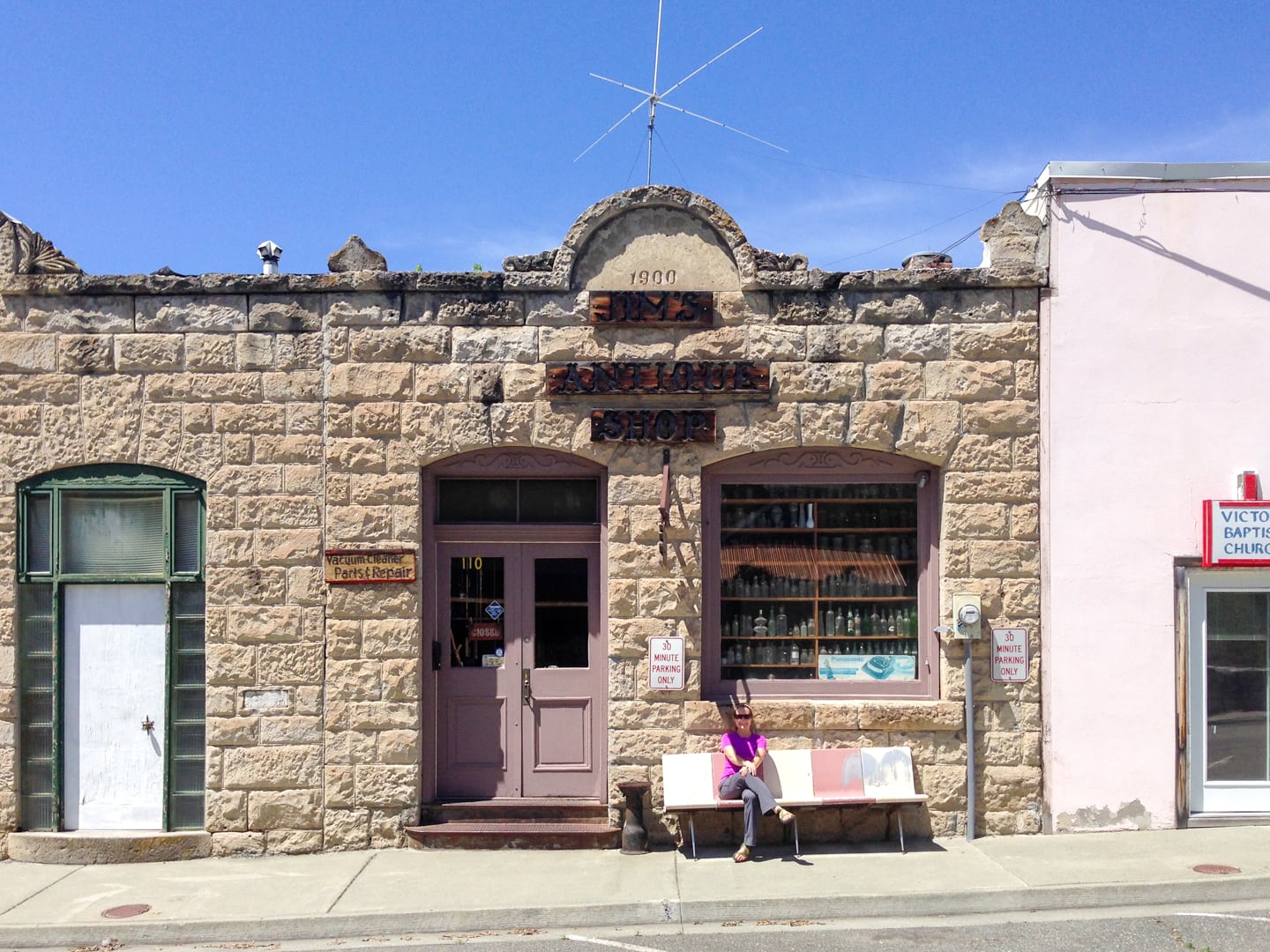 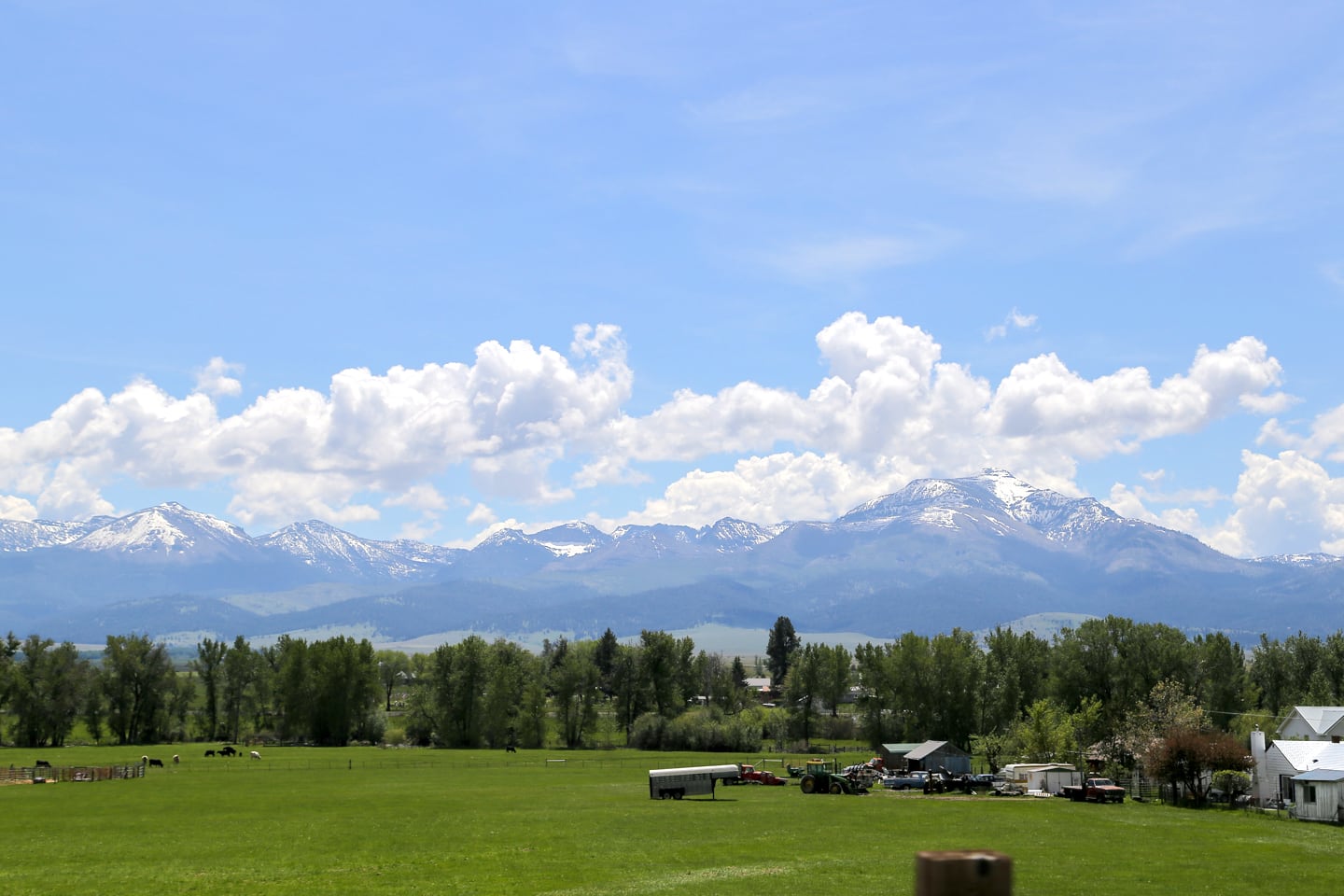 The drive from Canyon City to Sumpter offered stunning views of the Strawberry Mountains and surrounding countryside. 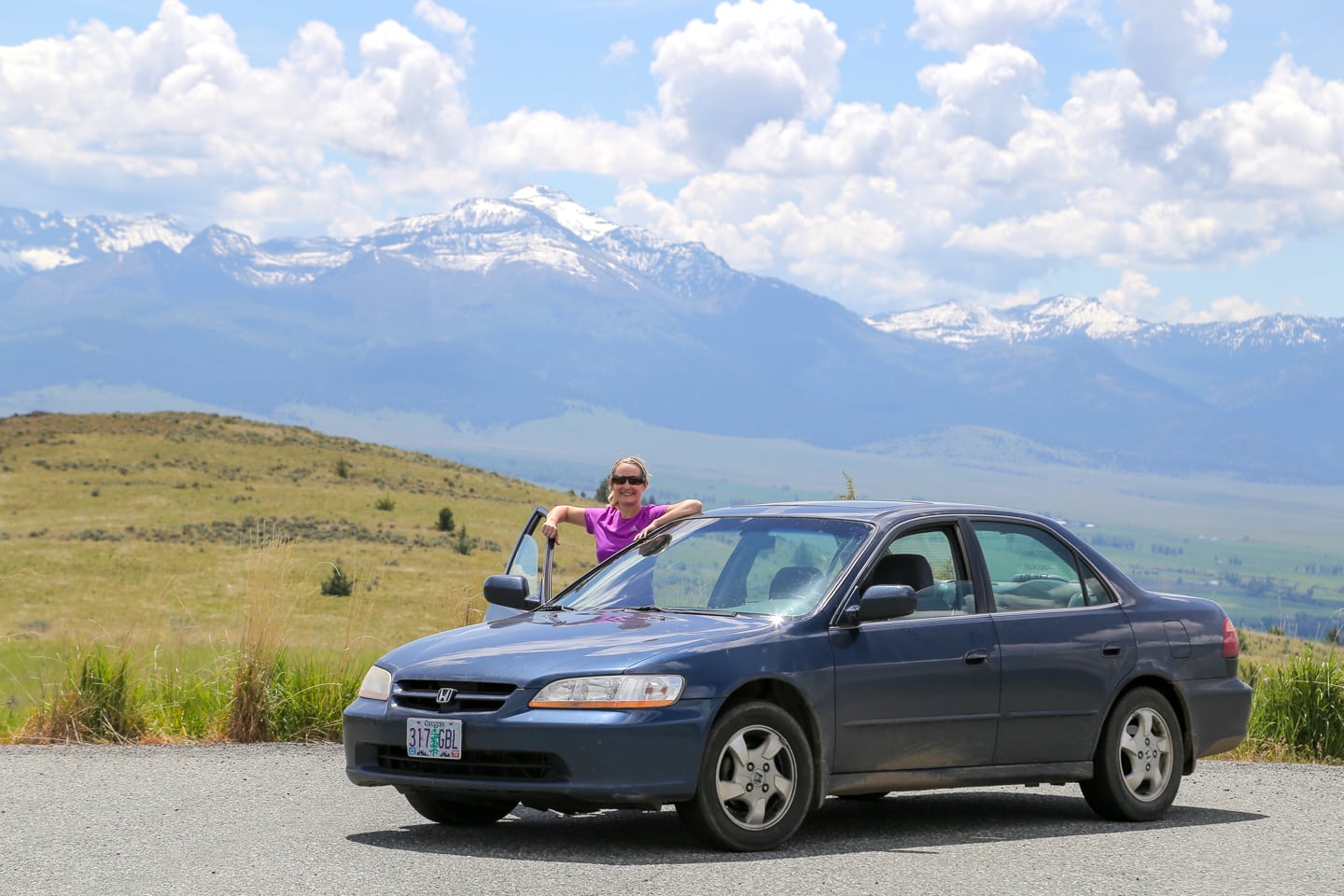 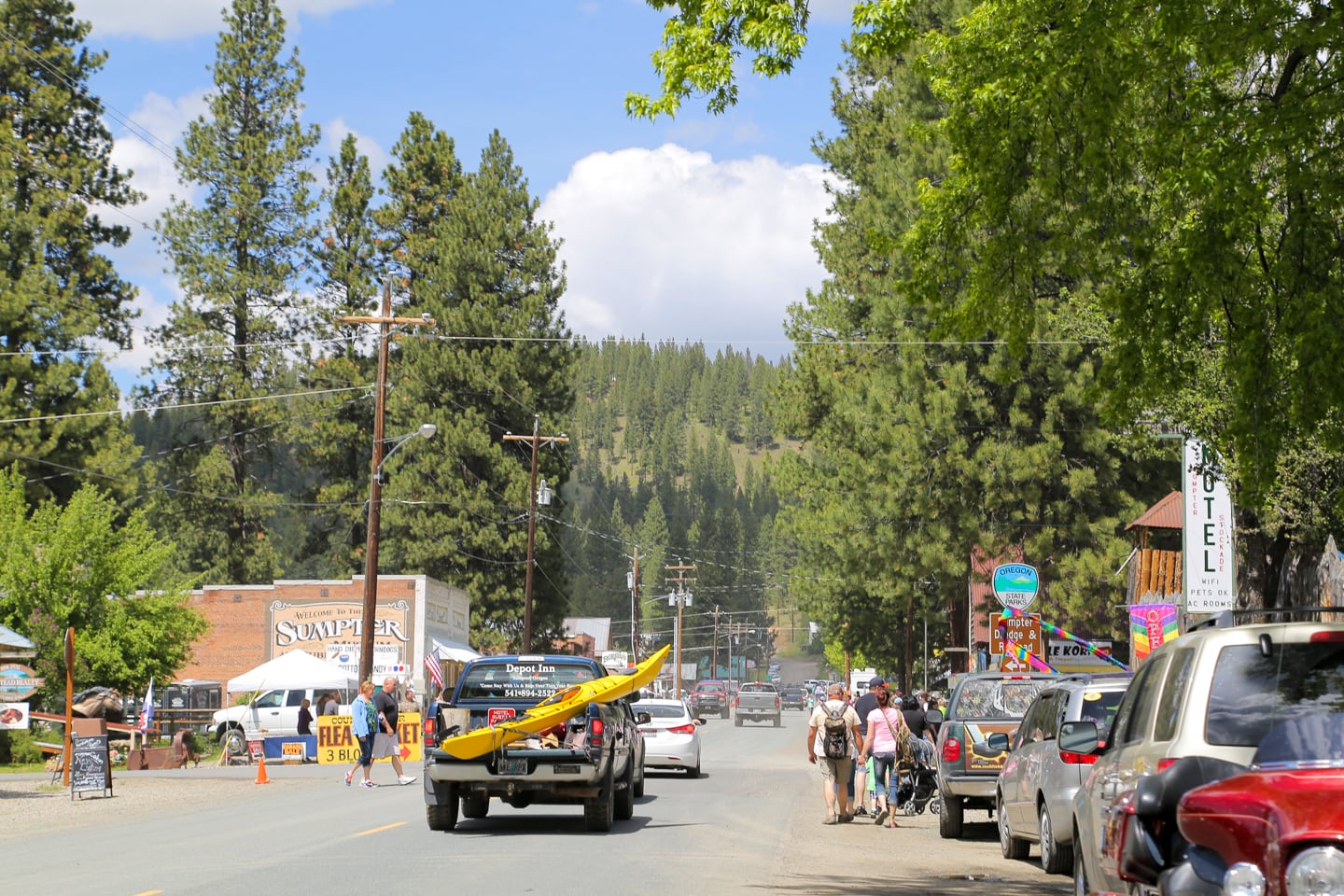 The small town of Sumpter was a bit off our route, but we took the small detour to say hi to John, a family friend who runs Baird’s Barn, an antique shop/stall at the Sumpter Flea Markets which happen on Memorial Day, Fourth of July and Labor Day weekend. Sumpter was definitely much more happening than Canyon City on this particular Sunday and an interesting place to spend an afternoon. 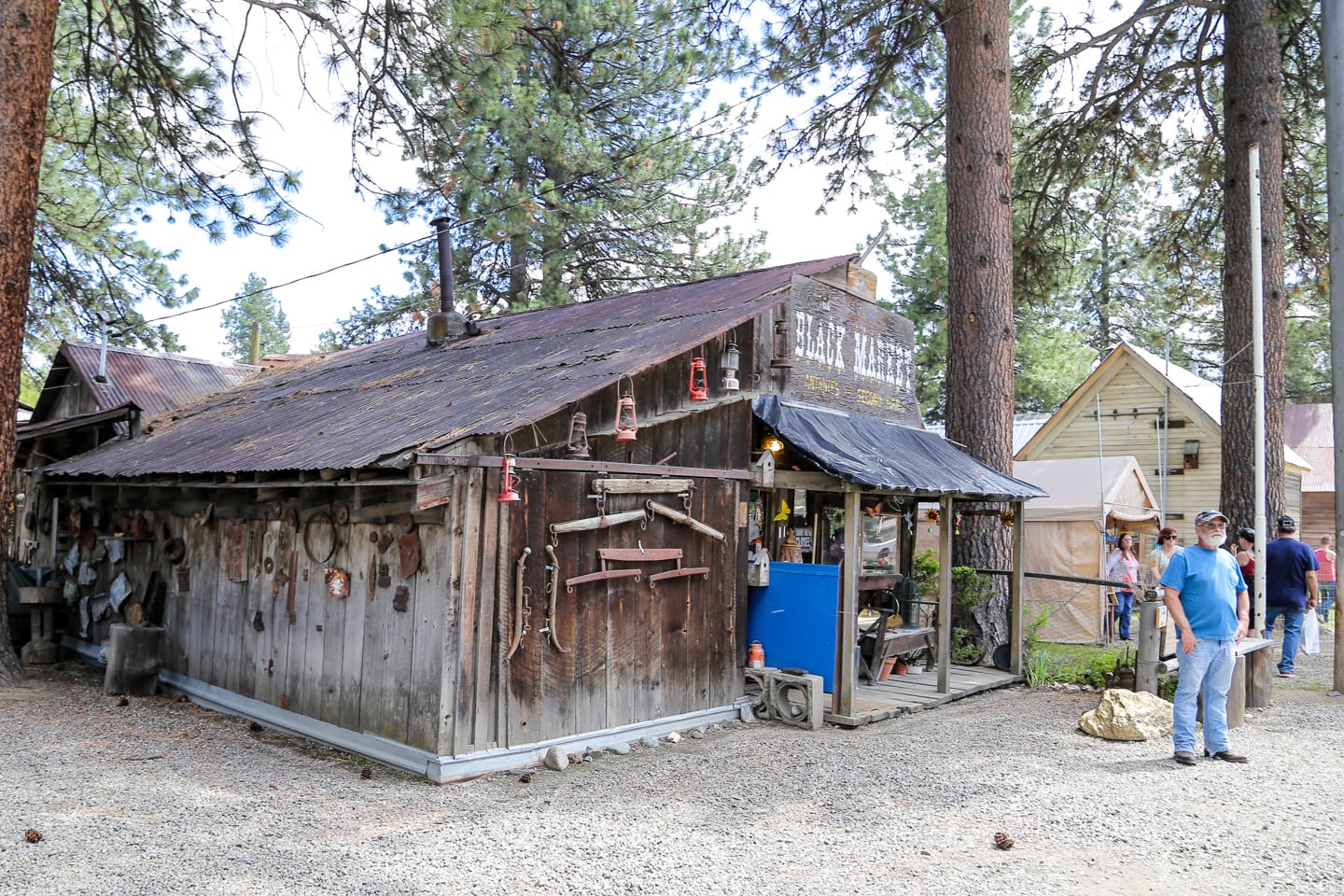 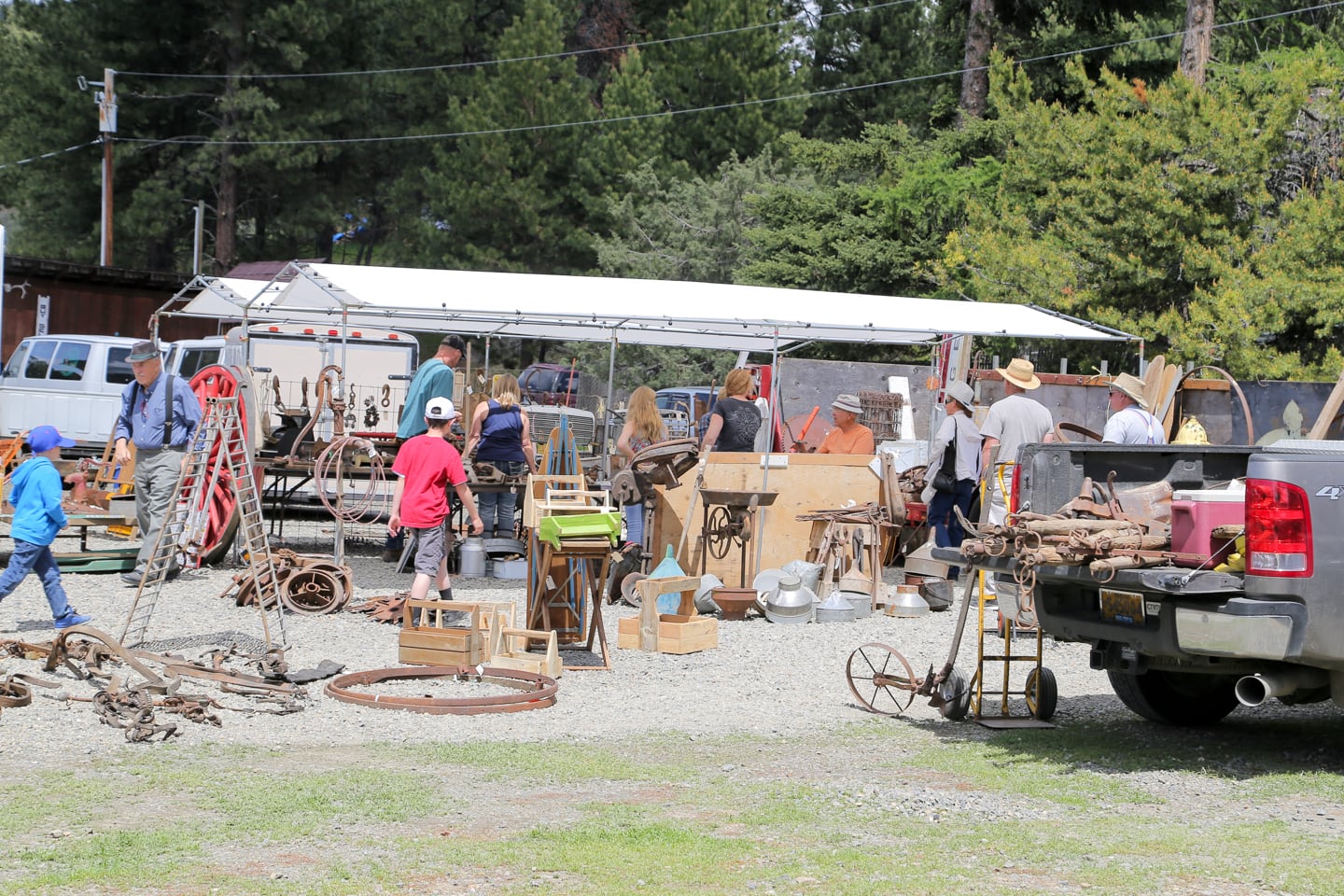 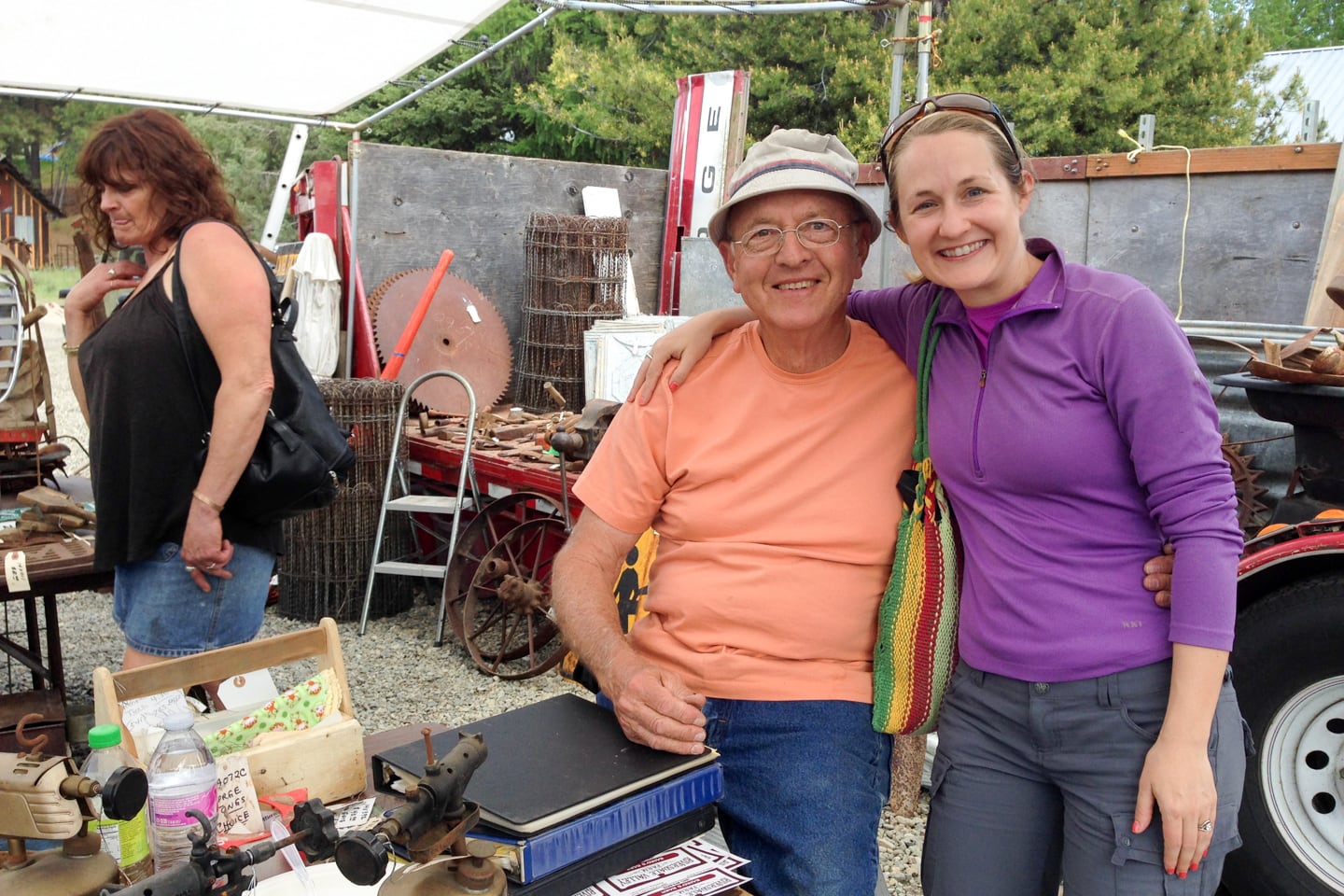 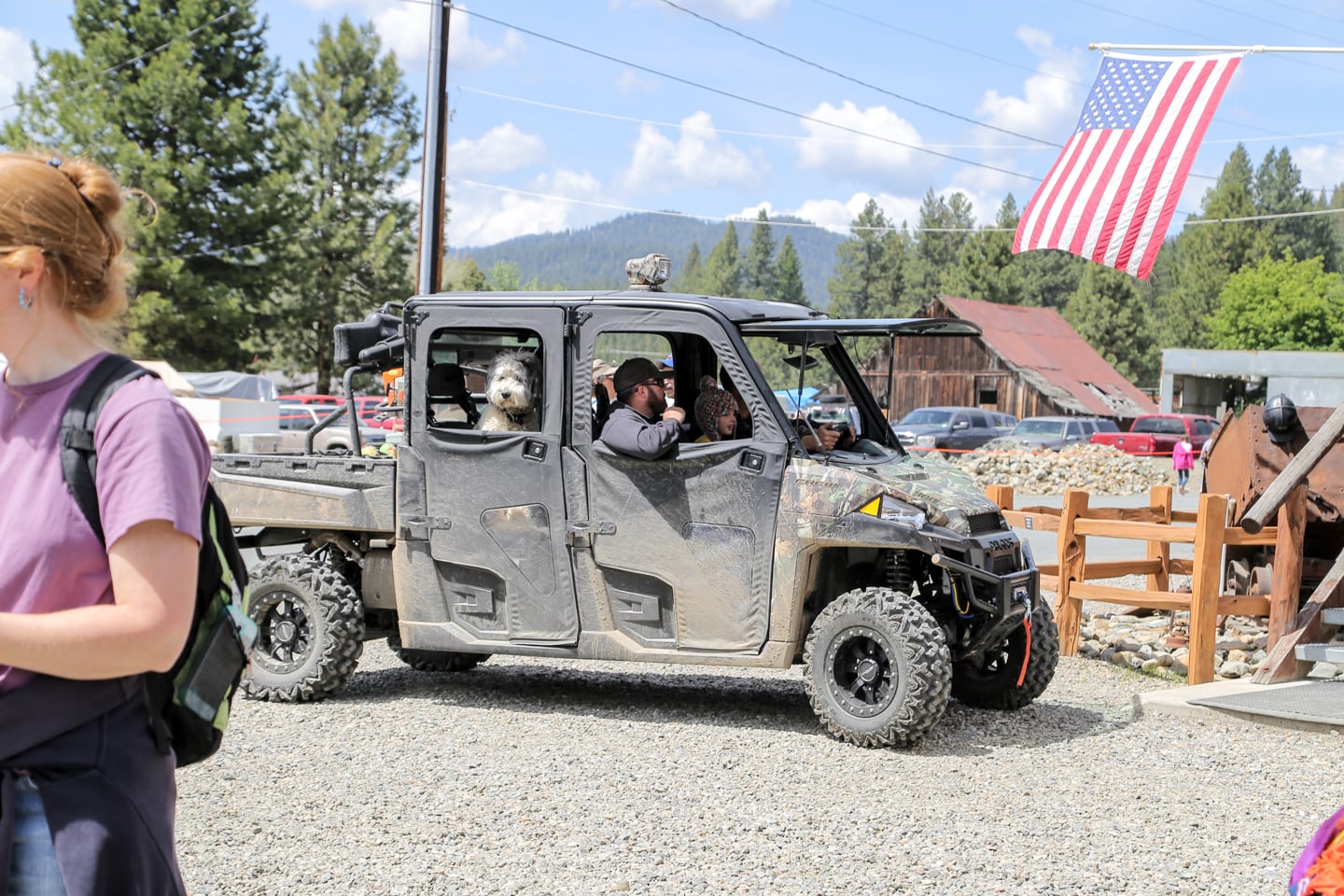 There were all sorts of ‘rigs’ in Sumpter for the Flea Market, but this one took the cake — a modified John Deer utility vehicle, complete with camouflage exterior, rear gun rack and seating for four! I particularly enjoyed the look on the dog’s face, as if he totally appreciated the level of awesomeness of his family’s ride. 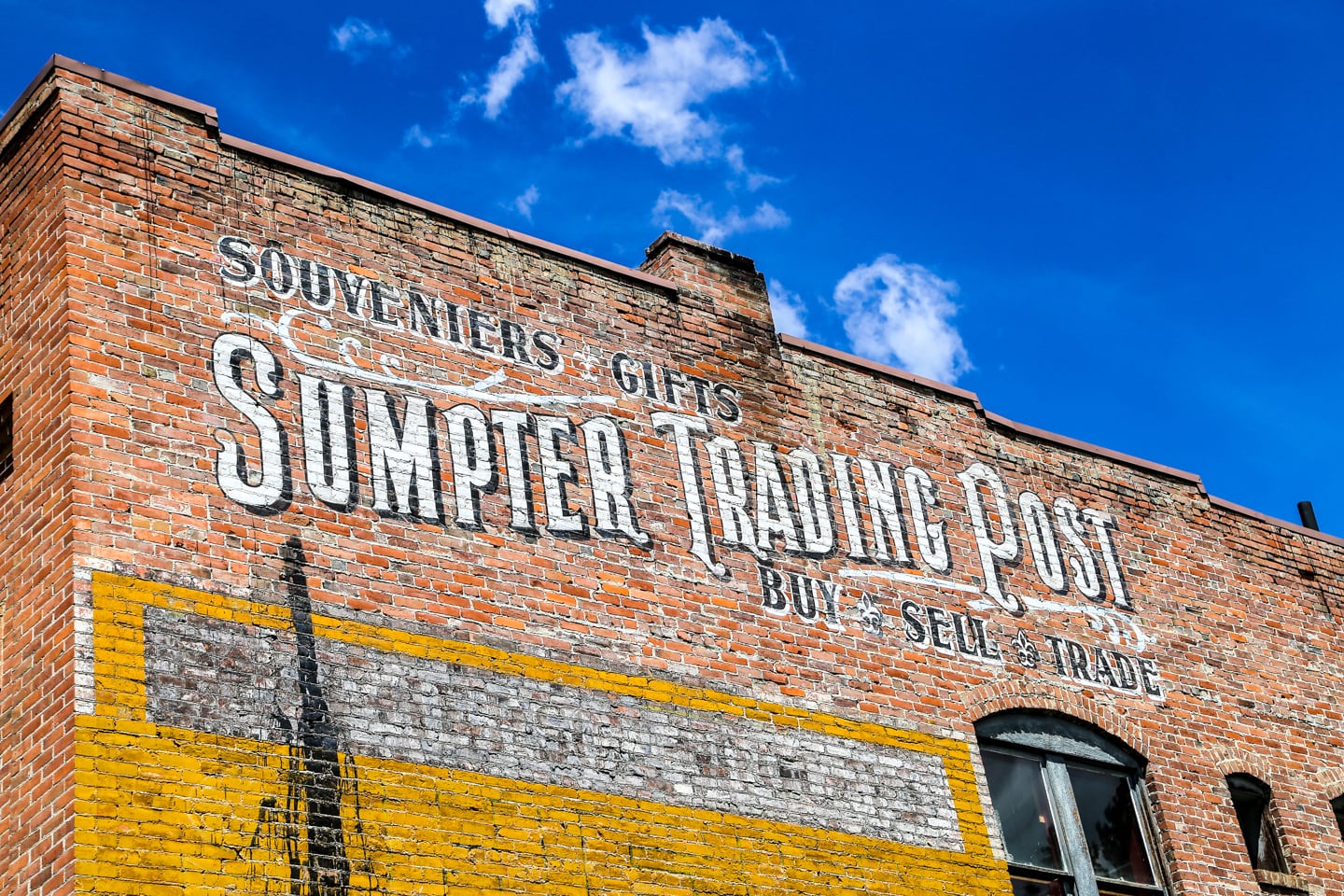 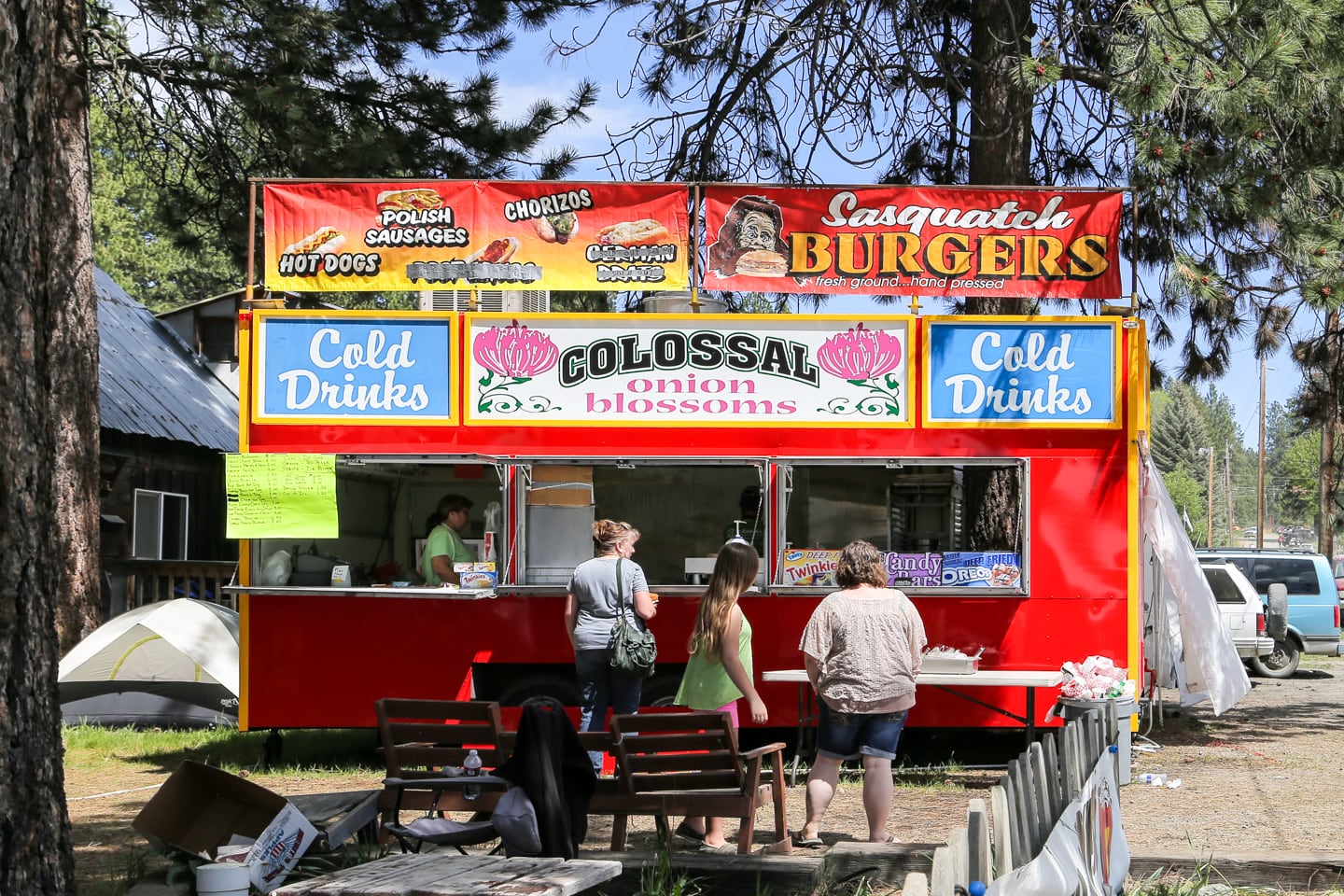 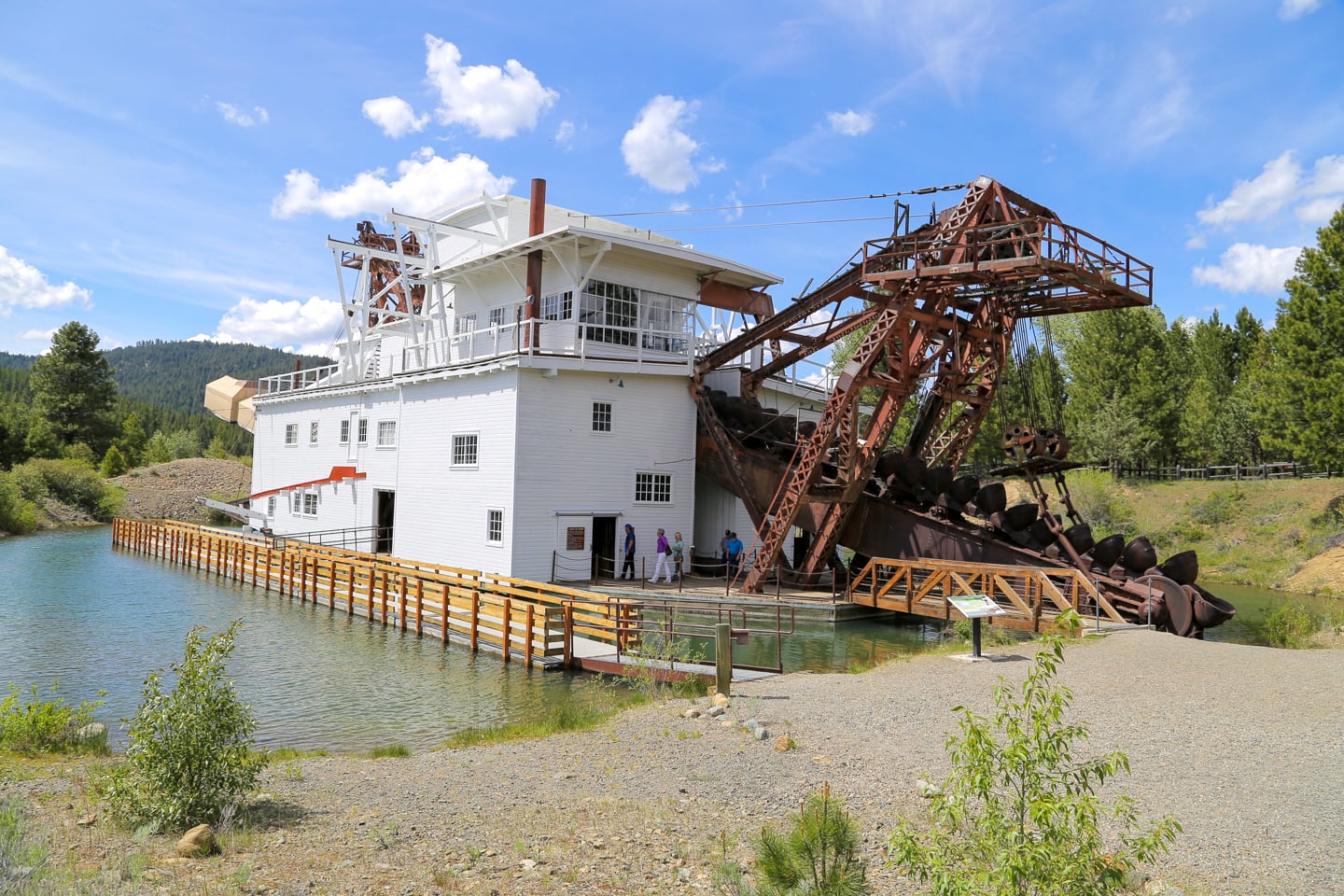 Now this was a surprise — the Sumpter Valley Gold Dredge. Yes, it is floating, and no, it is not a boat…well, not exactly. It’s a dredge, but not in the traditional sense — meaning it was not meant to clear a navigable lane for other vessels. Nope, there was gold in that thar valley and folks dreamed up some crazy ways of getting to it. From 1913 to 1954, three dredges traveled more than eight miles and extracted over $10 million in gold. They essentially moved slowly down the valley, taking their small pond (the water around them) with them, wherever they went, cutting through hills and whatever lay in their way. It has sort of a telescopic arm on one end with a series of bucket shaped scoops which dig into the earth and bring the soil up through superstructure of the dredge, where the soil is processed, gold collected, and remnants deposited out the rear. It really is an interesting sight to behold, both inside and out. 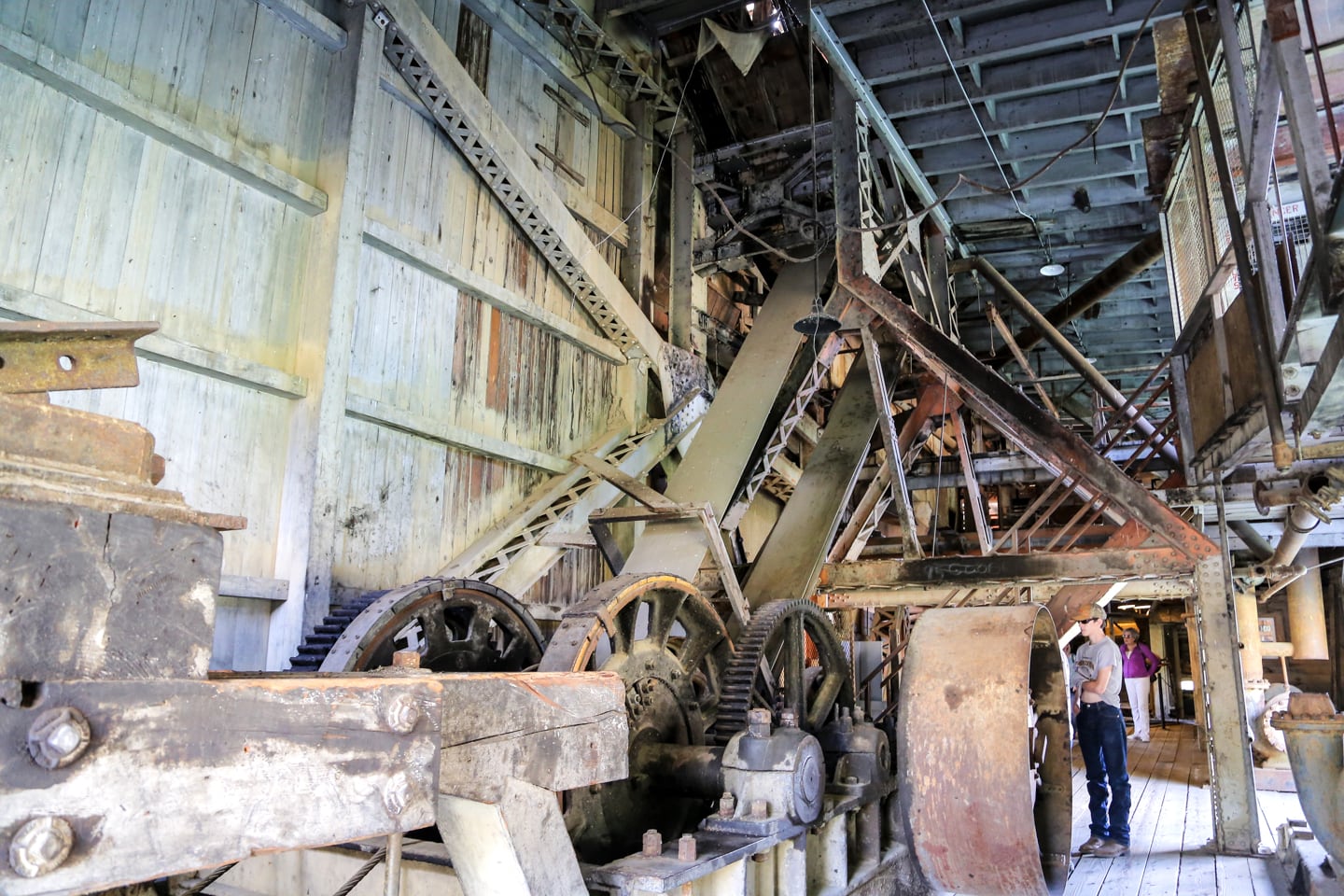 Sumpter to Baker City and Beyond 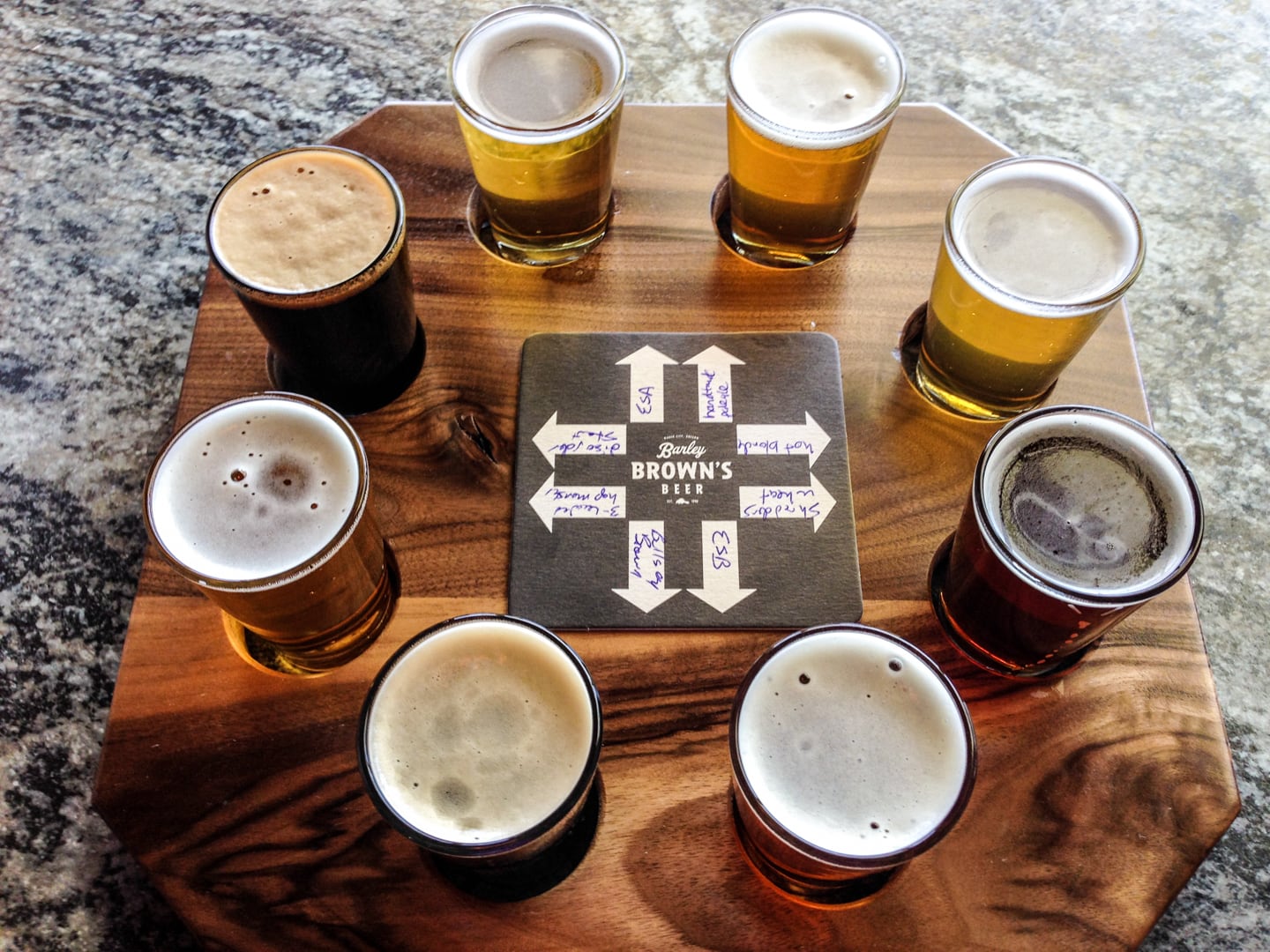 After leaving Sumpter, we made a beeline to Baker City, where we stopped for a taster at Barley Brown’s beer. Baker City is quite the pleasant town, and certainly the most livable in our minds of all the towns we passed through. It has an upbeat atmosphere with a lived-in, well-cared for historic downtown, and lots of greenery. It was also one of the warmest stops on our road trip. 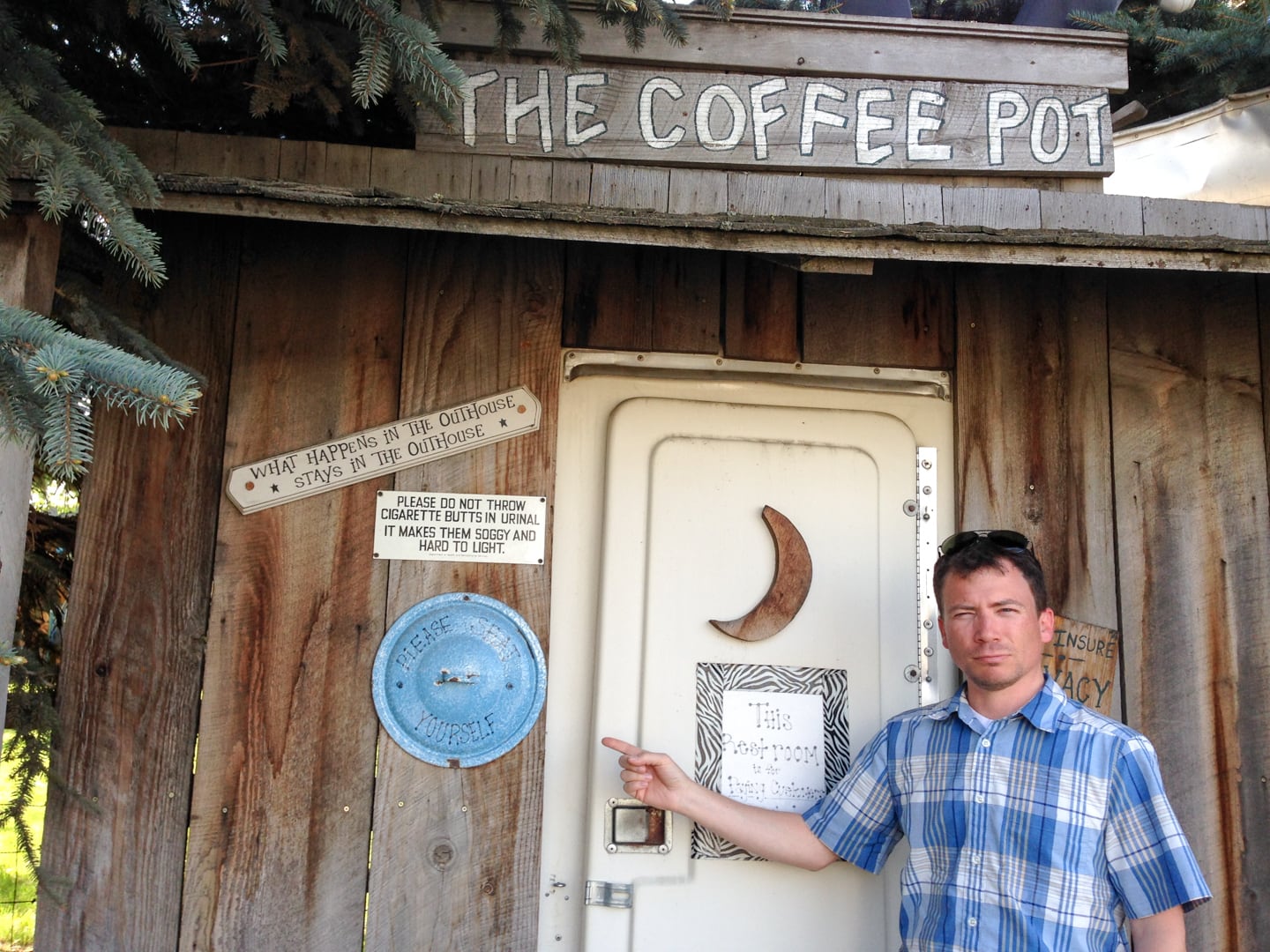 We read that you can’t drive through Lostine on your way to/from Wallowa Lake without stopping at the famous Blue Banana! And you know, I think they’re right. Quite the unique coffee and smoothie joint, featuring the tail of a VW Bug and airplane, big blue banana, and “The Coffee Pot” out back, which asks all patrons to “Please Seat Yourself” (above). 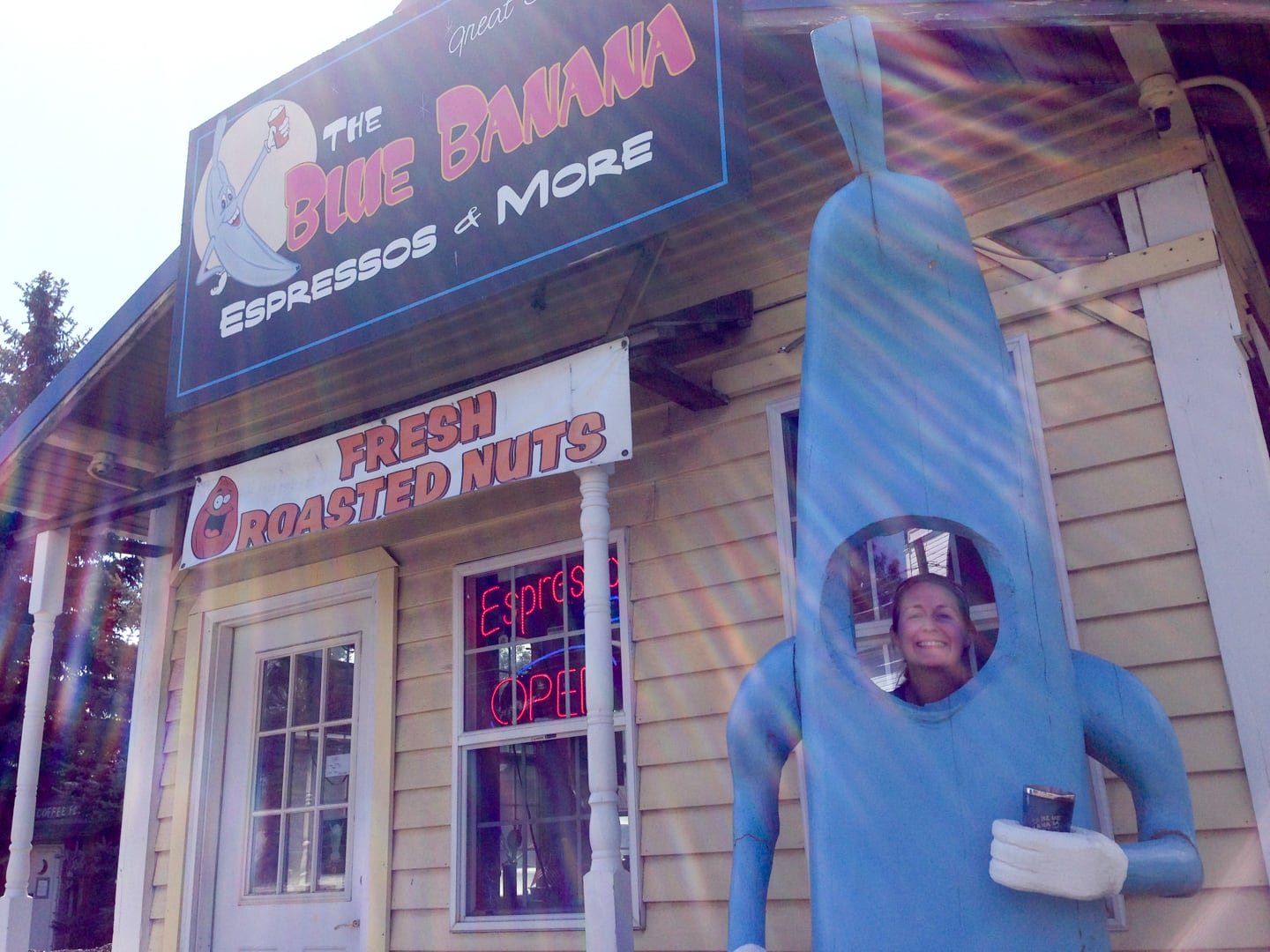 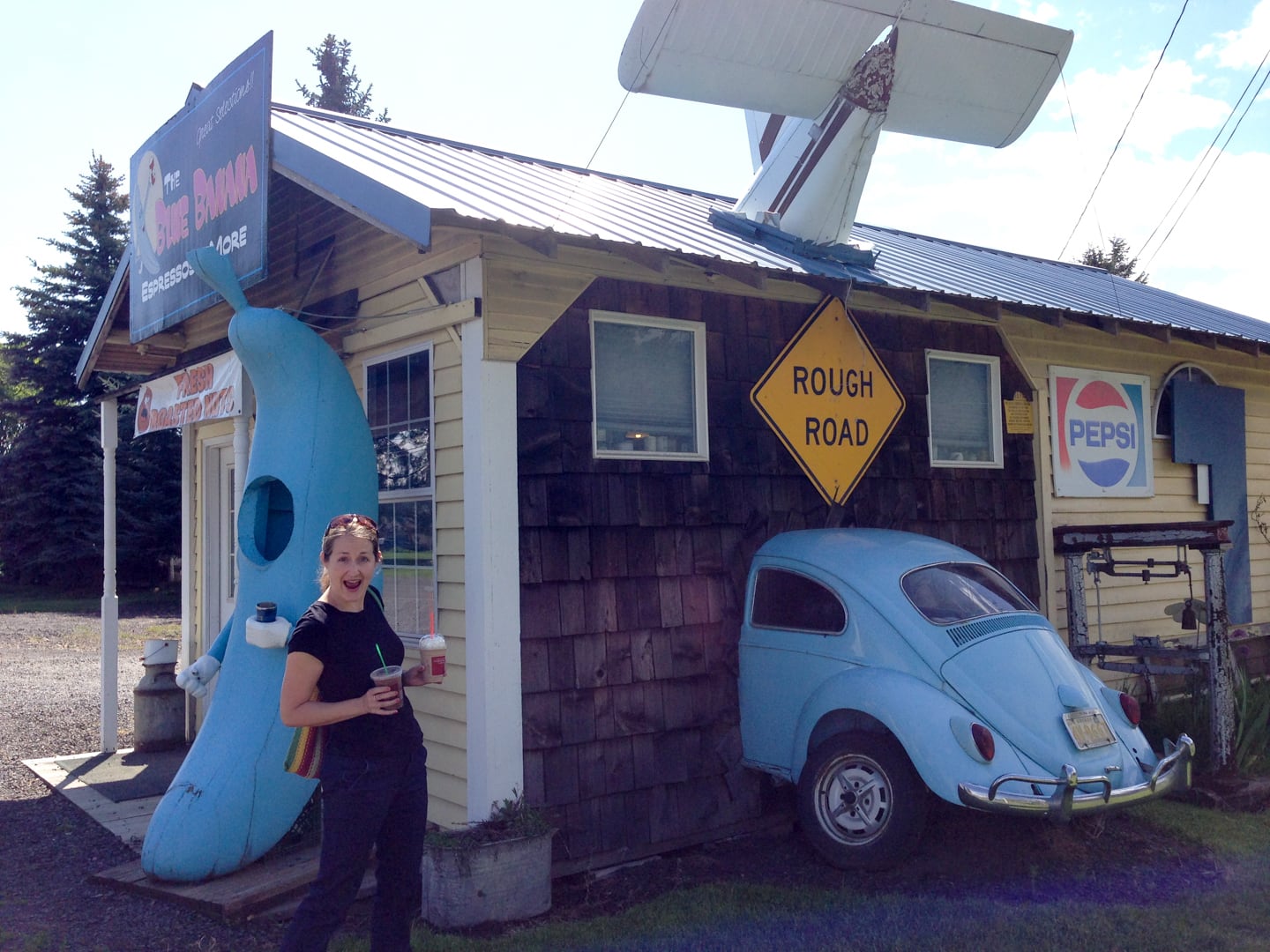 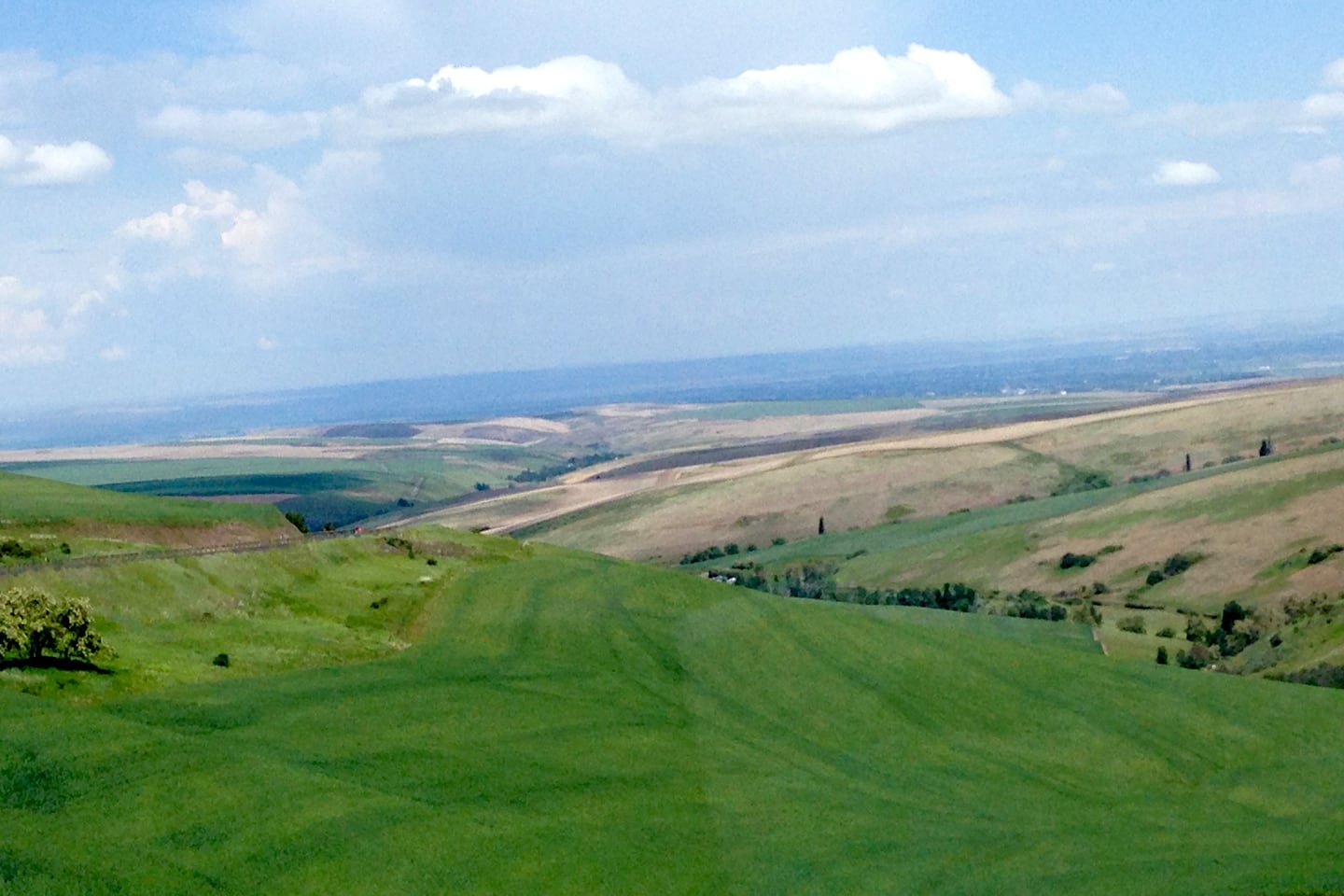 In all honesty, we took these photos on our way out of the Wallowa Lake area after staying for two nights at the State Park. I didn’t have a better place to put them, so I’m including them here. They were taken en route from Lostine to Boardman descending from one of many mountain passes on the way back. 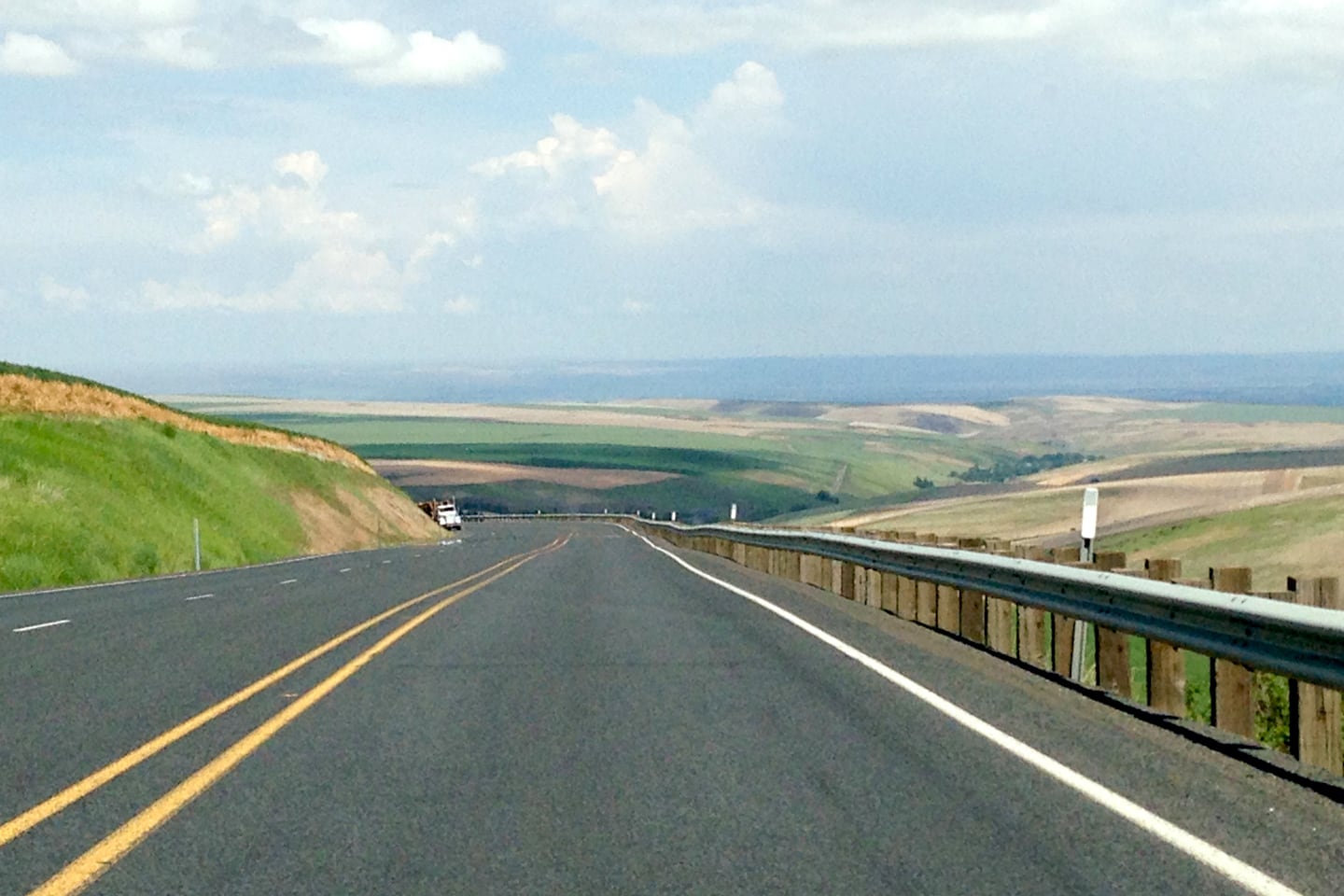 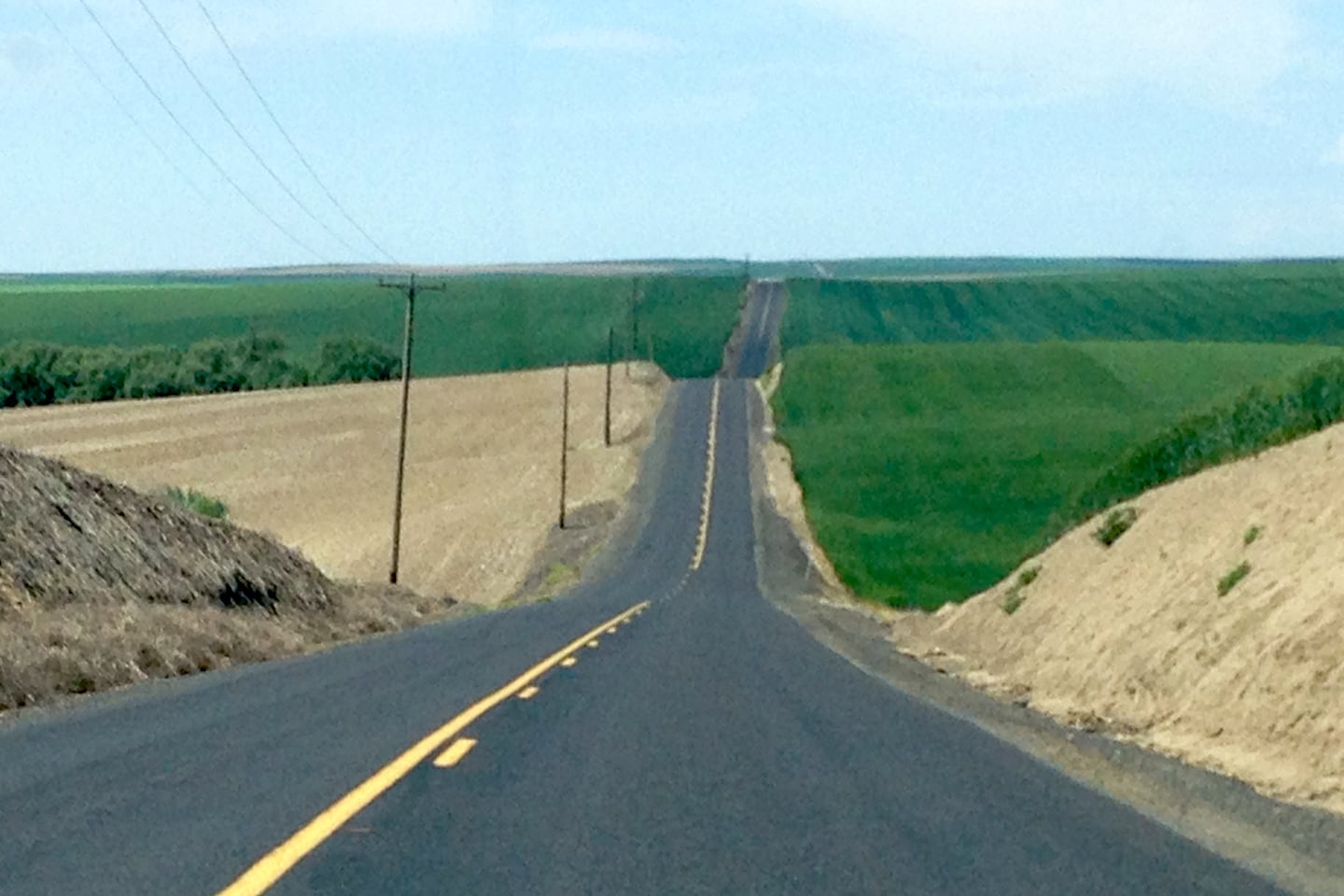 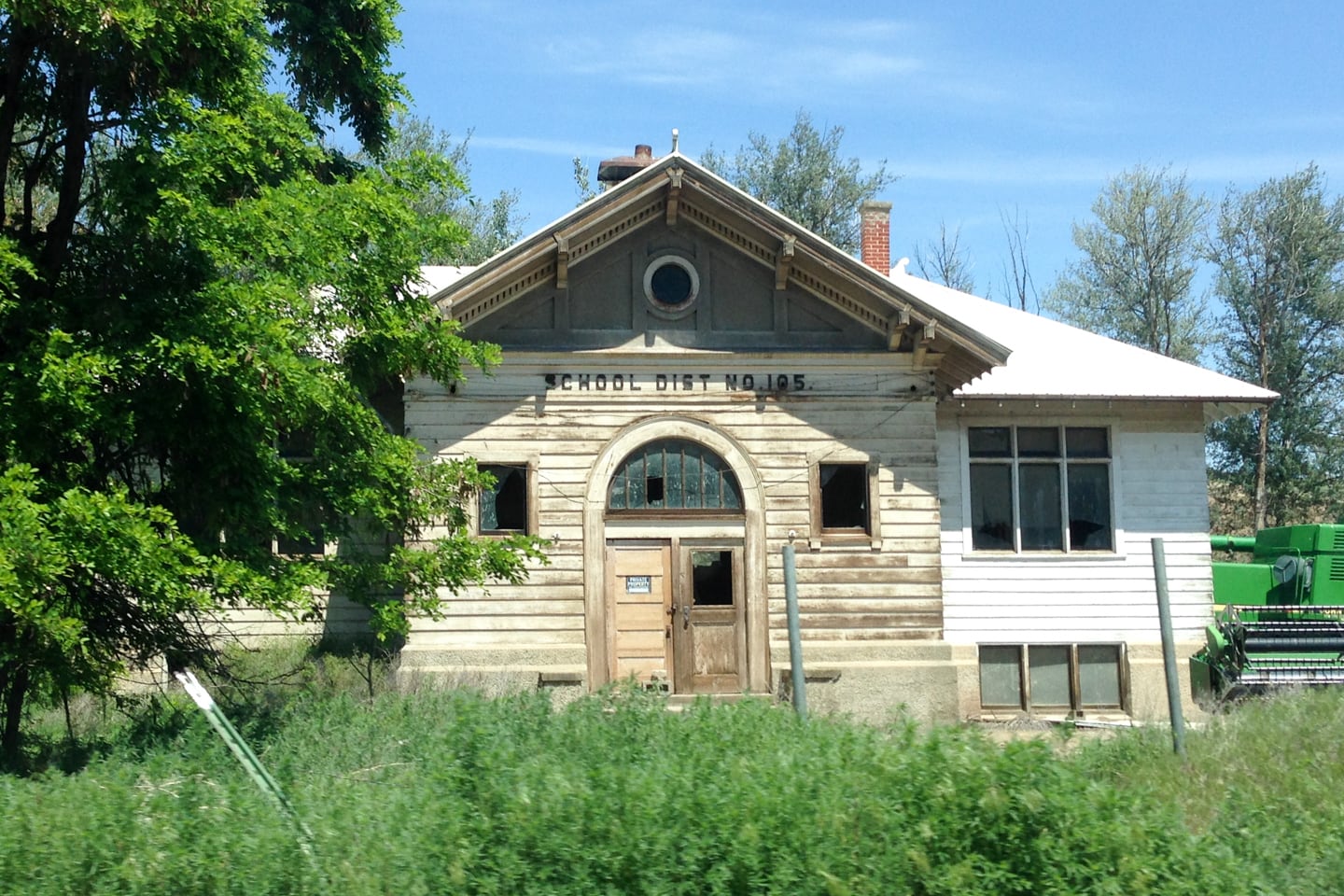