This summer I find myself in Uganda, of all places, traveling around the country looking for answers.

This summer I find myself in Uganda, of all places, traveling around the country looking for answers; not for solving any sort of existential dilemma, though many folks come to Africa for that purpose. I’m traveling on assignment for the World Bank with a research partner, Alexandra, to get answers on issues related to former child soldiers and other ex-combatants.

Our consultancy is a bit unconventional in that two graduate students with virtually no field research experience were essentially offered the rare opportunity to travel around Uganda for the summer to talk to people and write about the experience for one of the largest organizations on Earth that does this sort of thing.

Alexandra and I had worked on a group research project for one of the senior program managers at World Bank as part of our masters program. He liked what we had produced and pitched the idea of this consultancy to us just a couple weeks before he would need us to fly to Uganda. The two of us expressed interest and he told us what we were in for.

First, he made it clear that we’d be operating on a tight budget: We would not be able to stay in four-star hotels or fly first class as consultants often do, we might not have a private car driving us to all of our destinations, and our pay would be drastically slashed from that of a normal consultant’s. Considering either of us would have probably paid good money, slept on dirt floors, and rowed to Africa for this sort of opportunity, we could certainly agree to this.

Third, we would be expected to produce the absolute finest, ‘sexiest’ piece of writing material we have ever produced, no exceptions.

The decision wasn’t a difficult one.

And that was that. 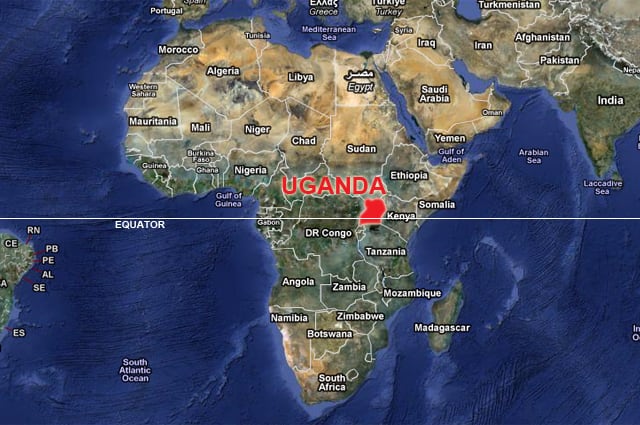 By the way, there’s a map of Africa, and there’s Uganda, right on the equator. A lot of people don’t realize how big Africa actually is, which is why I’ve added the map below. The first time I saw one of these I was blown away. You can fit the entire United States, China, India, Argentina, AND Western Europe over the continent and still have plenty of room left over. This brings us to Uganda, a seemingly tiny country when compared to the area around it. In reality, Uganda is 91,000 square miles, which is just under the size of the state of Oregon. 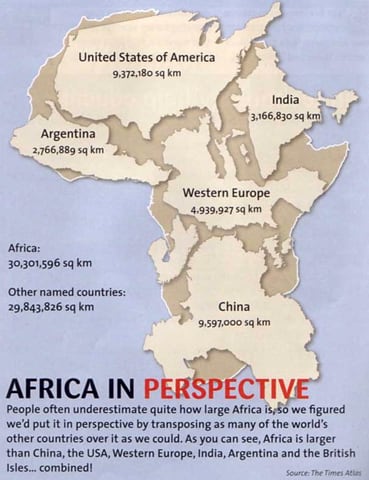 We have two primary assignments:

1) Contribute to a book of lessons learned during one of the World Bank’s largest efforts in Africa, the Multi-country Demobilization and Reintegration Program (MDRP). Our contribution covers all things Ugandan in a chapter looking at support for child soldiers returning from captivity. Essentially, we were sent to Uganda to travel around to the key areas for children during the MDRP period 2003-2008, talk to key individuals and organizations to find out what happened and why, and write up our findings.

2) Conduct a study on migration and ex-combatants – to find out who’s moving, where they’re moving, and why. We’re aiming to interview 150 individuals over the age of 18 who have come back from fighting in rebel movements and have been on the move. We’re hoping to get a sense of whether some of the factors driving this movement are related to lack of service provision, as well as whether or not critical support is reaching this vulnerable mobile population.

That’s a brief overview of what we’re doing. In future posts I’ll get into background and specifics, as well as many of the absurdities, challenges, and rewards involved with conducting these studies. 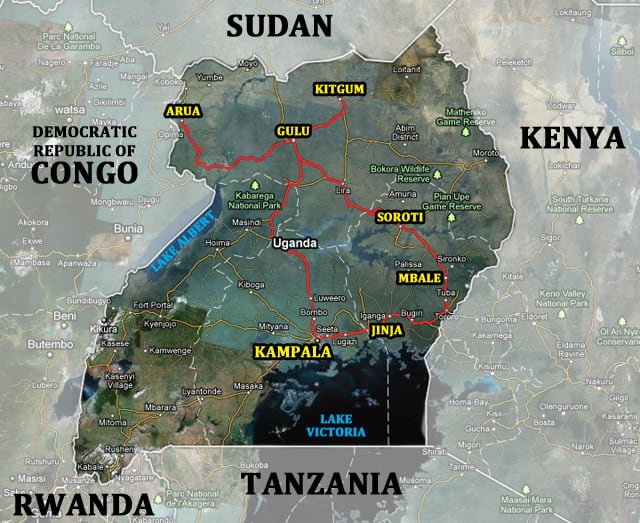 And that’s Uganda (above). Uganda has some special neighbors. One of the most volatile corners of Africa for decades, the region is finally enjoying some semblance of real stability and peace, with the exception of pockets of Southern Sudan and Eastern Congo where some rebel groups are still active.

I’ll talk more about Uganda and its neighbors in the days and weeks ahead, but now I’d like to turn your attention to the red lines and cities in yellow. If you are keen to follow our trip on a map, this is a good starting place. We’ll start our research in the capital, Kampala (flying into nearby Entebbe), then head north to Gulu, then up to Kitgum, over to Arua, then visit Soroti and Mbale, hit up the source of the Nile at Jinjafor some writing, and make our way back to Kampala where we started.

So we’ve got 7 weeks (29-May to 15-July) to make our way around Uganda on our own by any ‘safe’ means necessary to learn as much about programming for former child soldiers and migration of ex-combatants. Should be an interesting summer!

Wow! I never realized Africa was so big – thanks for providing the map! This sounds like such a great opportunity – congratulations! Keep the pictures coming 🙂