Our second day hiking on this amazing mountain path in southwestern China offers fair weather, fantastic views and an escape from the crowds.

For Day 1 of our Tiger Leaping Gorge adventure, click here. For background on our big trip, click here.

We made the [mostly unconscious] decision to sleep in a bit on the morning of our second day on the trail. This ended up being an excellent turn of events which allowed the largest group of hikers staying at the guesthouse to get a healthy lead giving us the trail all to ourselves. After a tasty and hearty breakfast of pancake, hashbrown and eggs, we were on the trail around 10am. Weather conditions were just about perfect with cooler temperatures from the fog cover and no rain. However, the fog came at a price, crushing any hope of seeing the tip tops of the magnificent mountain peaks.

The biggest surprise of the morning was how long it took us — traveling at a good clip — to reach Halfway Guesthouse. Part of the group that we had been hiking with decided to push on past Tea Horse to Halfway GH near dusk because they had been told it was a mere 20-30 minutes on. We were even more happy with our decision to stop at Tea Horse when we realized that it had taken us about an hour between Tea Horse and Halfway and we would have most certainly made it in after sunset. Those who got an earlier start (namely the ones who stay overnight at Jane’s before the first day) seemed to end up at Halfway. 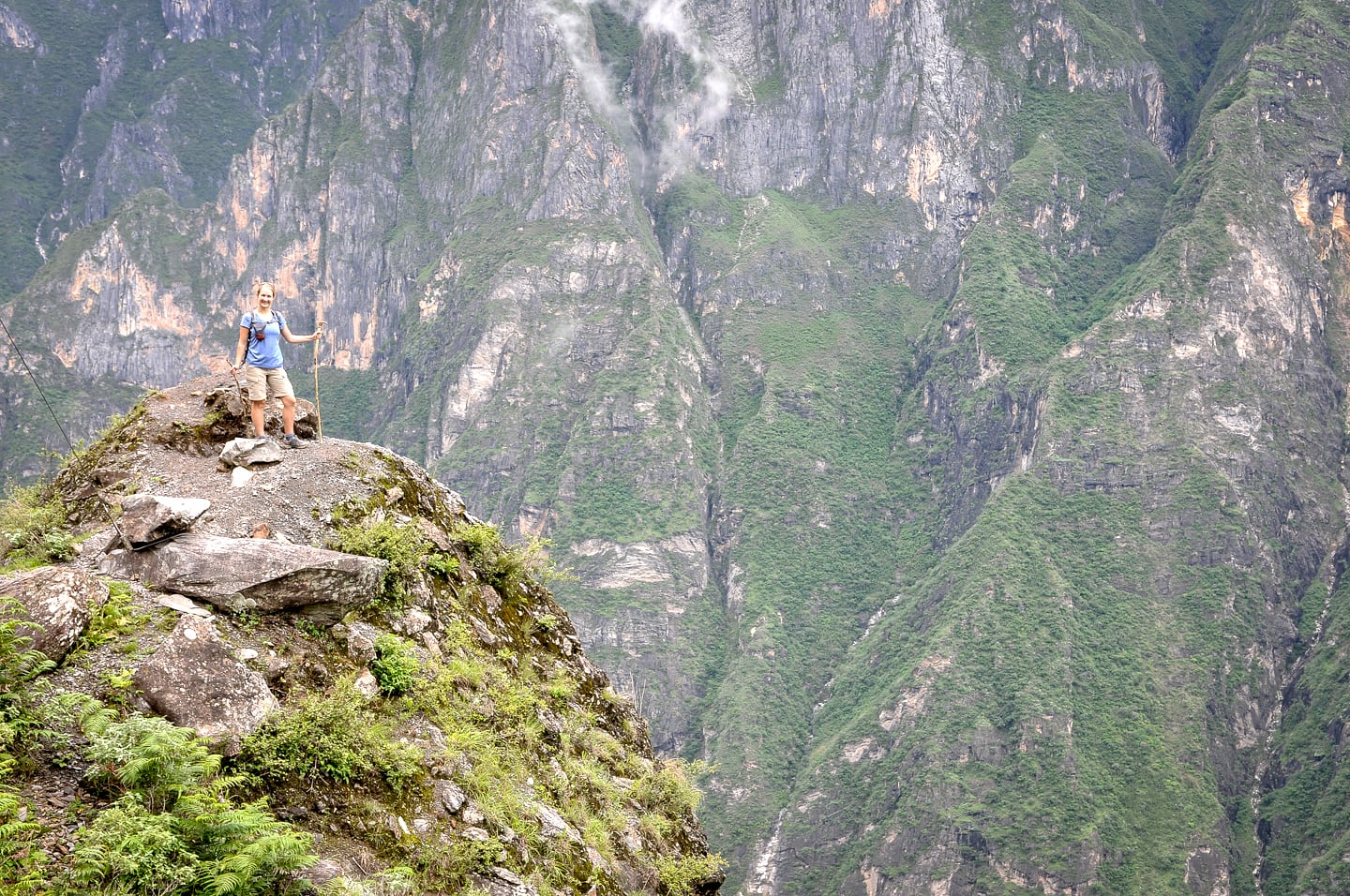 Lori and I endured a solid 10 minute wait to get our turn on these rocks — a couple of snapshots from the couple in front of us ended up turning into a full on outdoor photo shoot — so you better enjoy them! 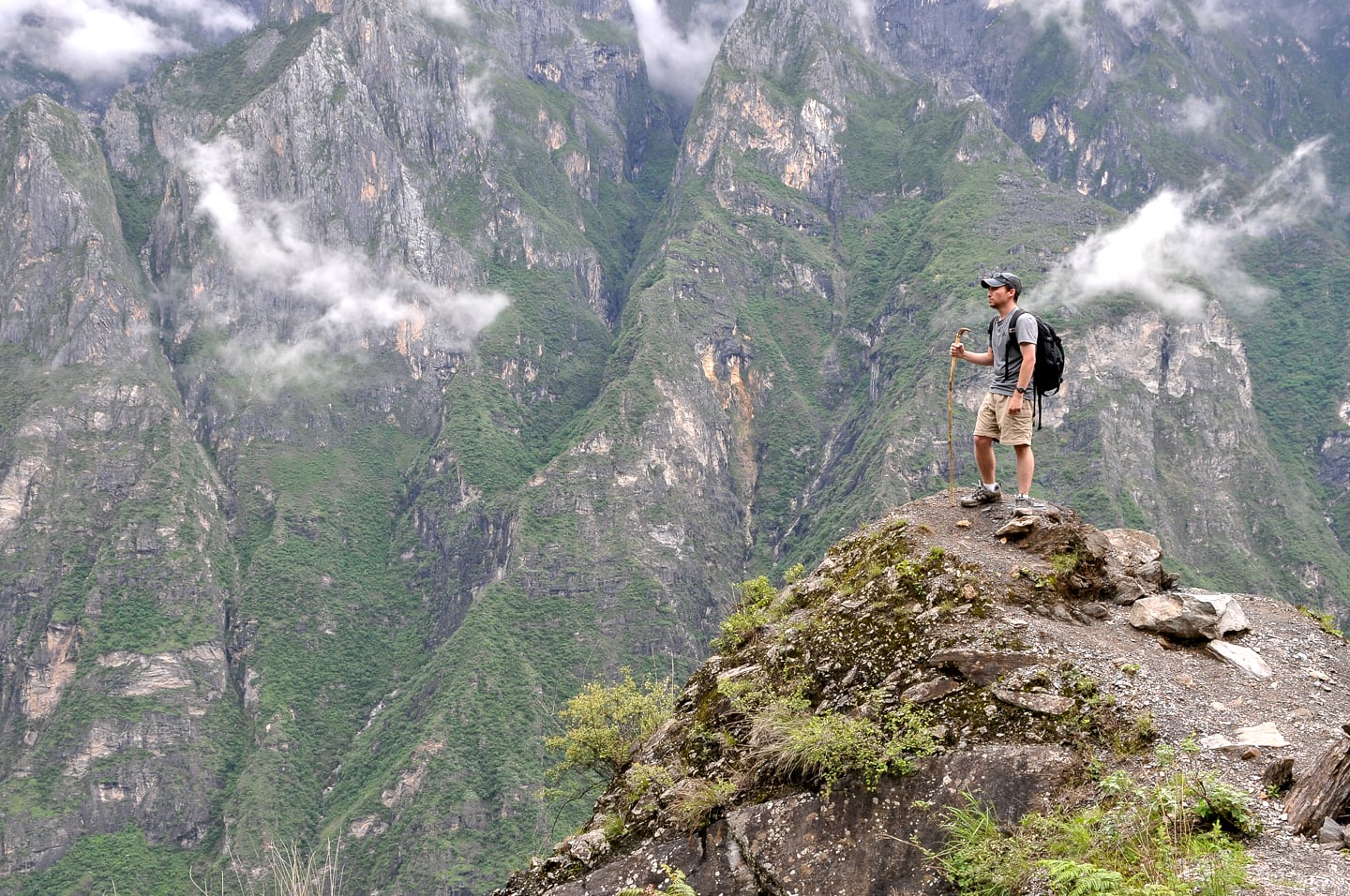 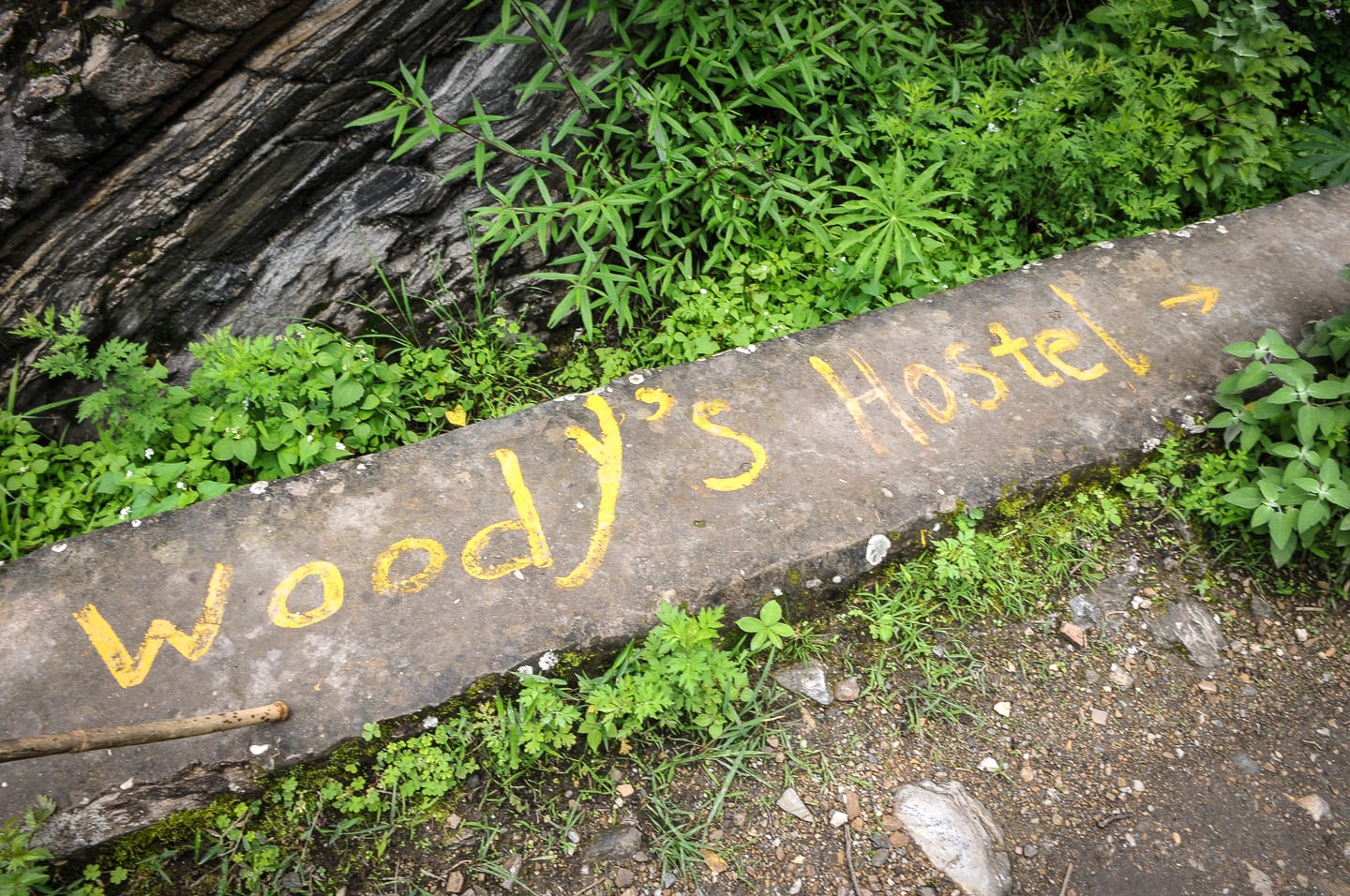 The controversial advertising on the trail — some find it helpful, others bemoan it as unnecessary graffiti tarnishing the pristine landscape. I was just happy to have the opportunity to experience a natural landscape in China, given the rush to industrialize every square inch. 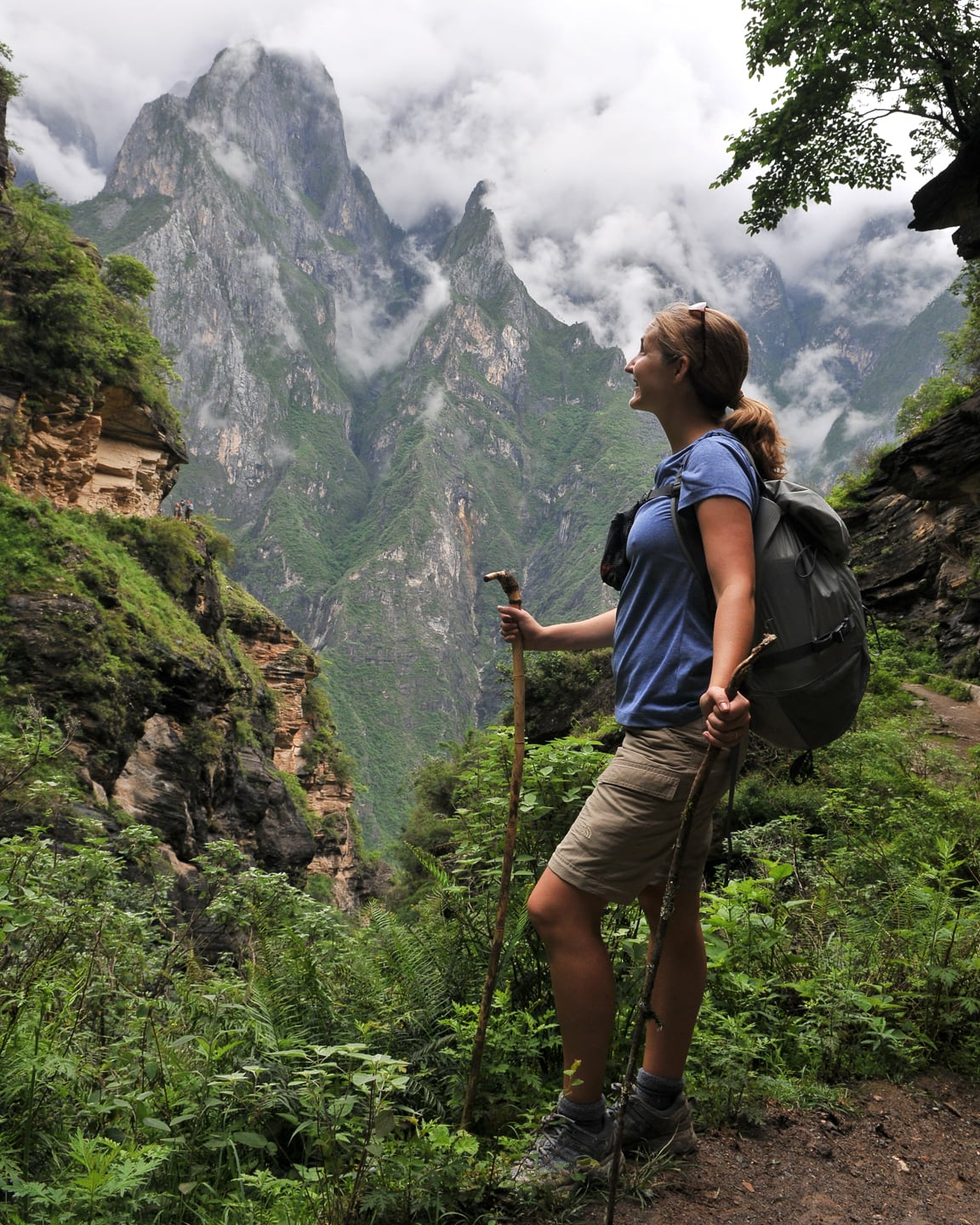 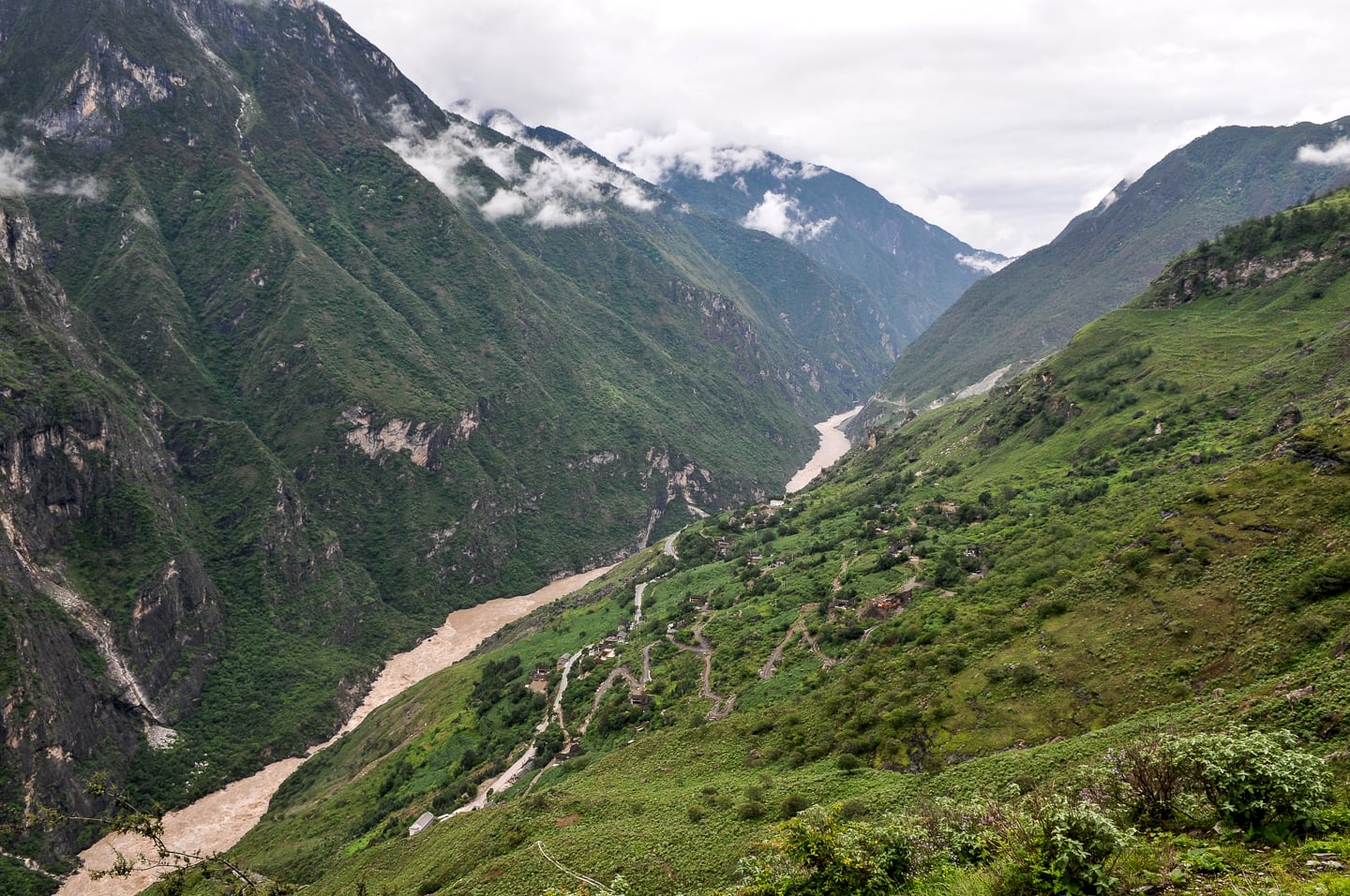 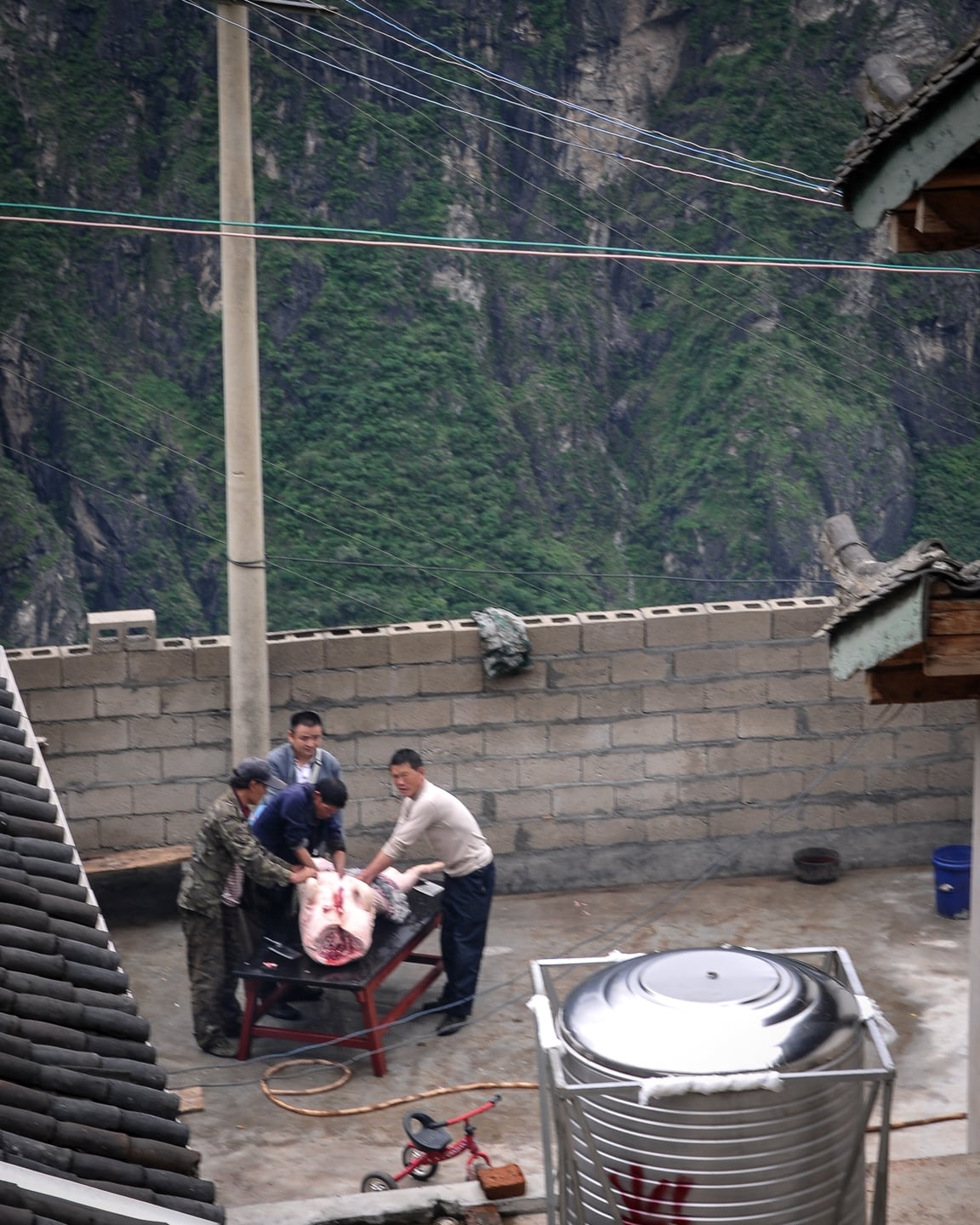 Passing four men disemboweling a pig — or at least we hoped that it was a pig and not a fellow hiker…we can’t be certain, really. 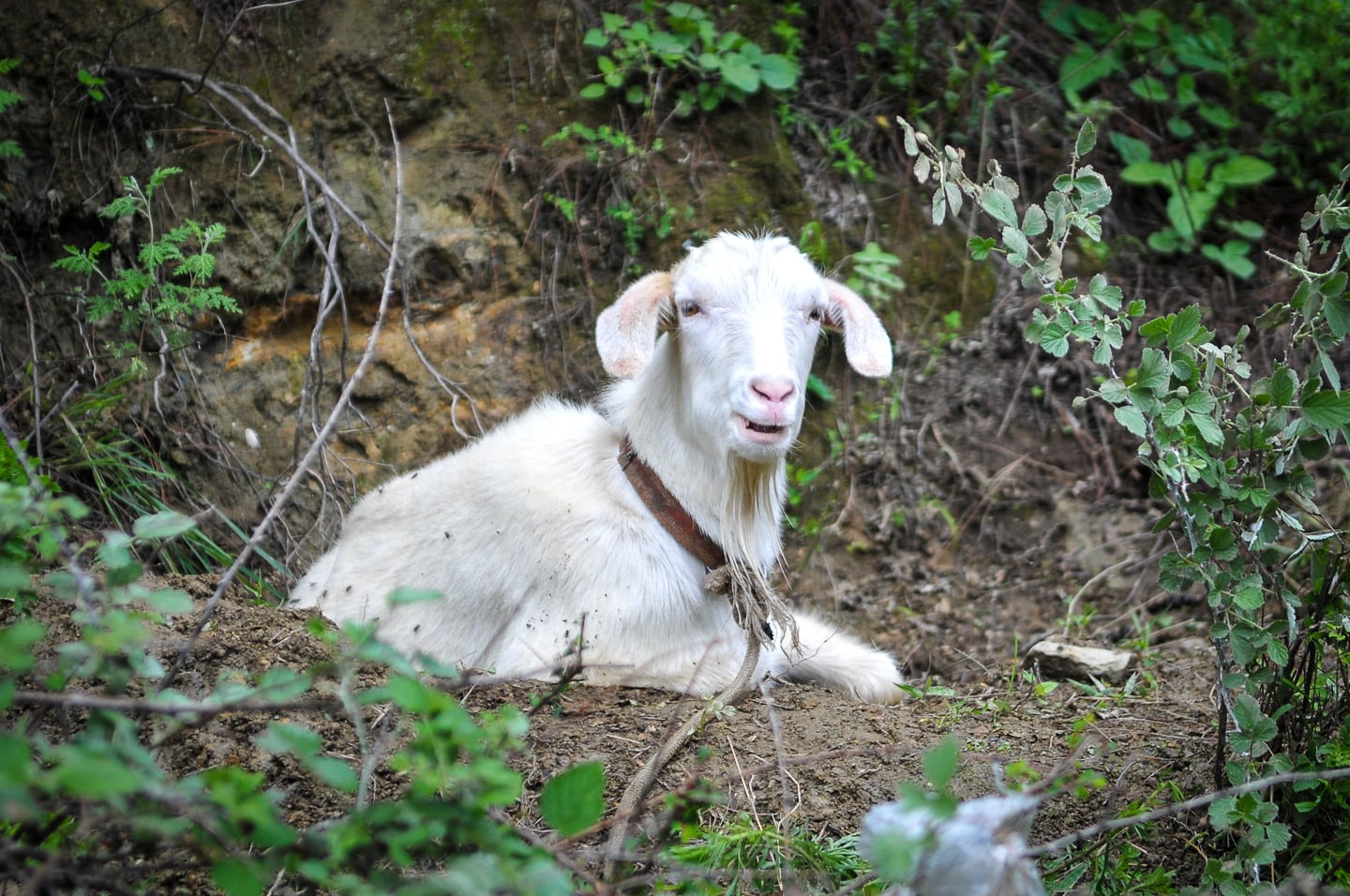 Our random encounter with an old Chinese mountain goat that seemed to be trying to get our attention: “Hey, meester! Where you go? You need water? Walking stick? Smoke-smoke? Good deal for youuu!” 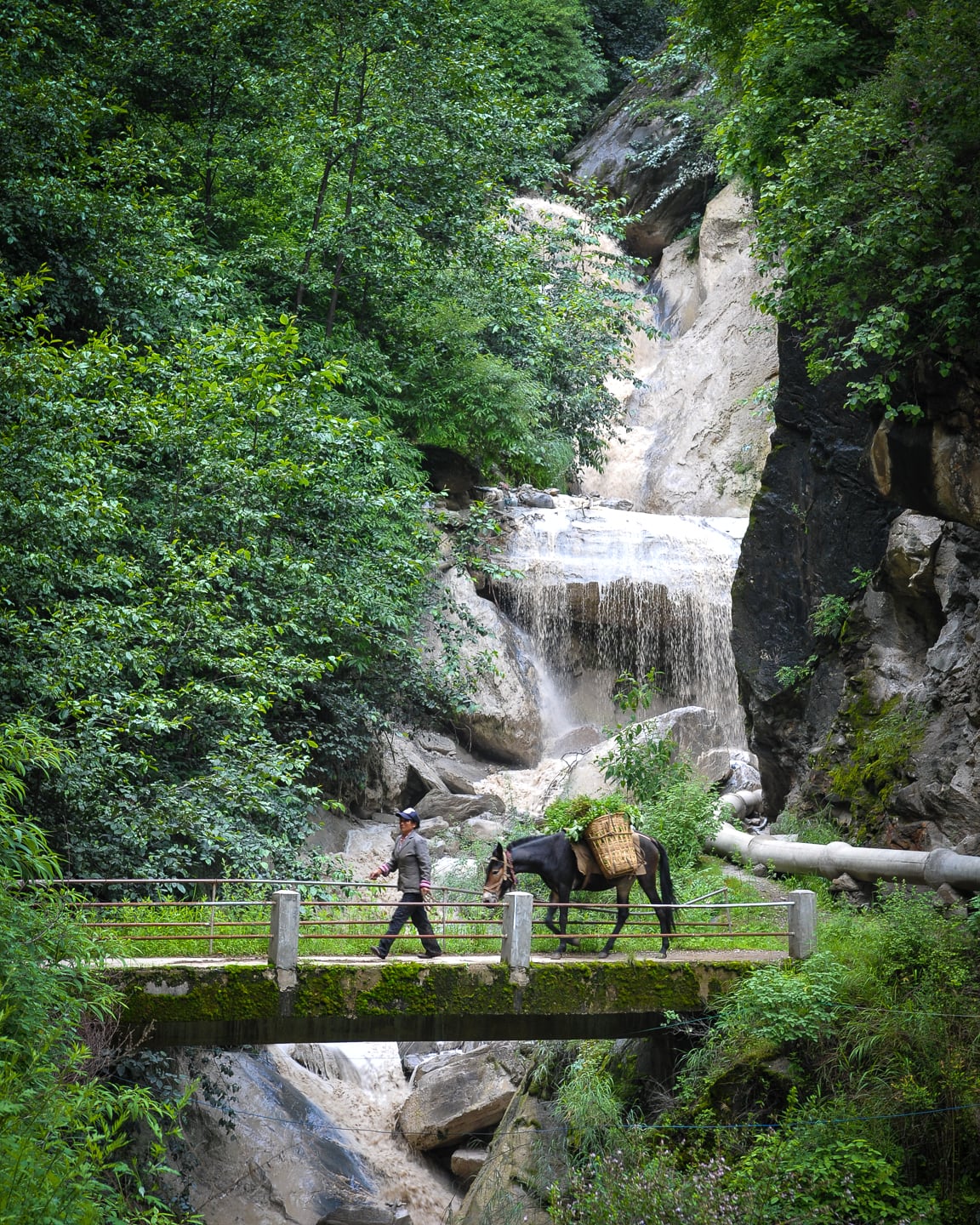 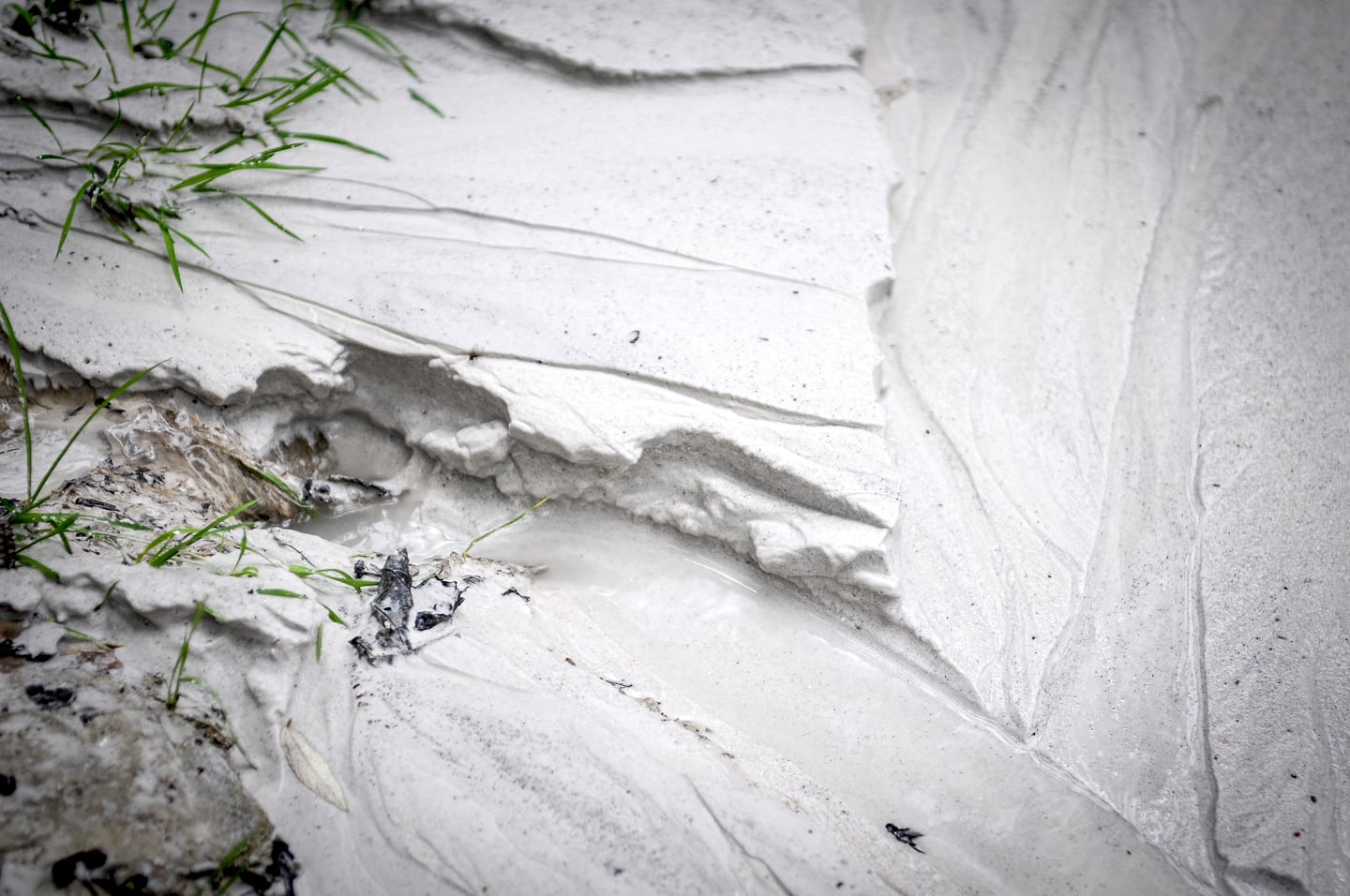 Along the trail we came across a couple of shacks with roaring smoke-belching contraptions fitted with a huge sifting device separating this unusual white substance from various rushing streams (the water in this area seems to be rich with the fine sediment). We have no idea if the main objective was to remove the sediment to use the water, remove the water to use the sediment, or both — regardless, the operation seemed to be a popular activity among locals. 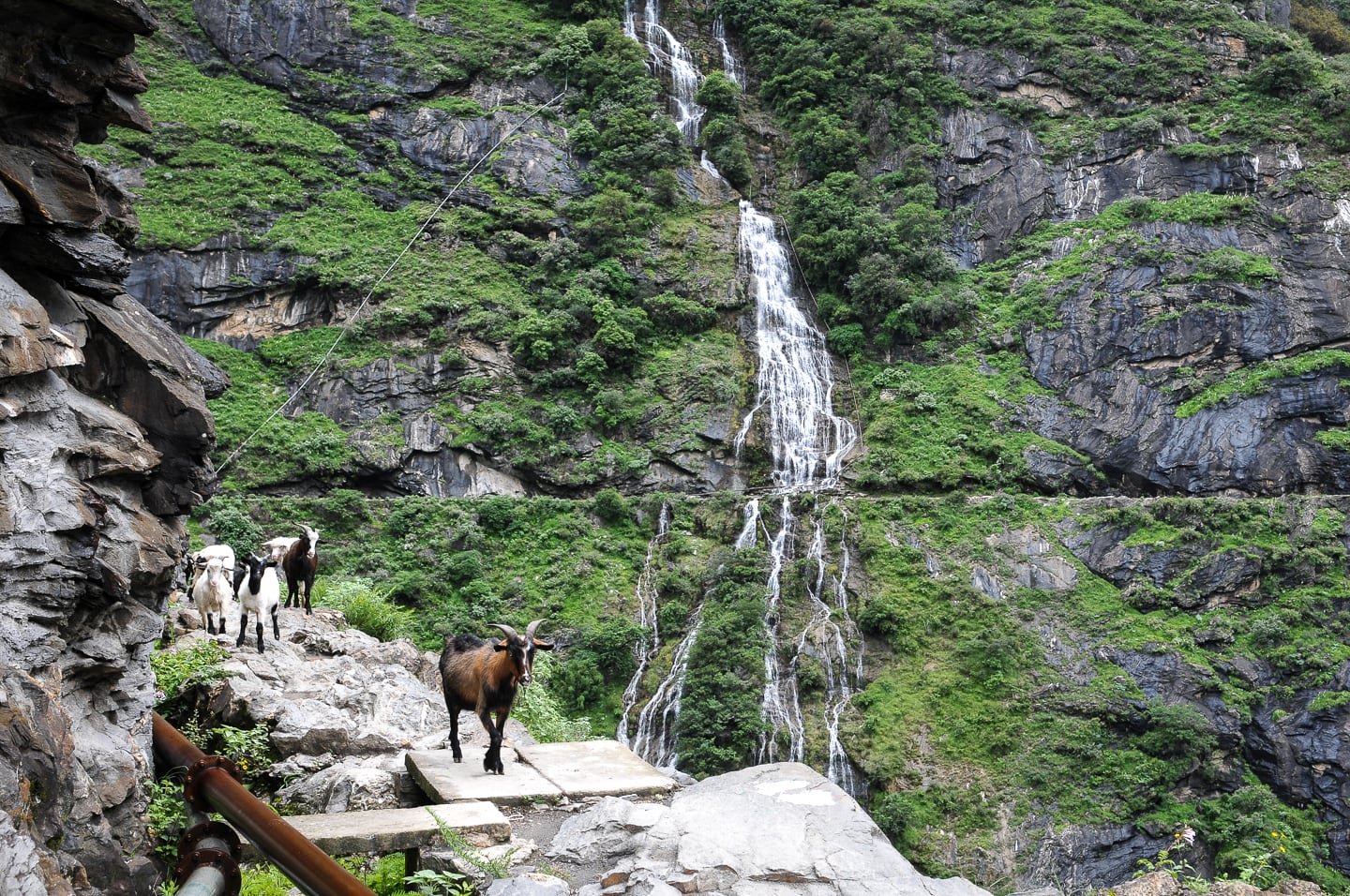 At one point we crossed the path of a small unattended herd of goats [above] very intent on getting somewhere. The picturesque waterfall was in actuality a swollen spring, and clambering over it proved to be our first significant challenge of the day. 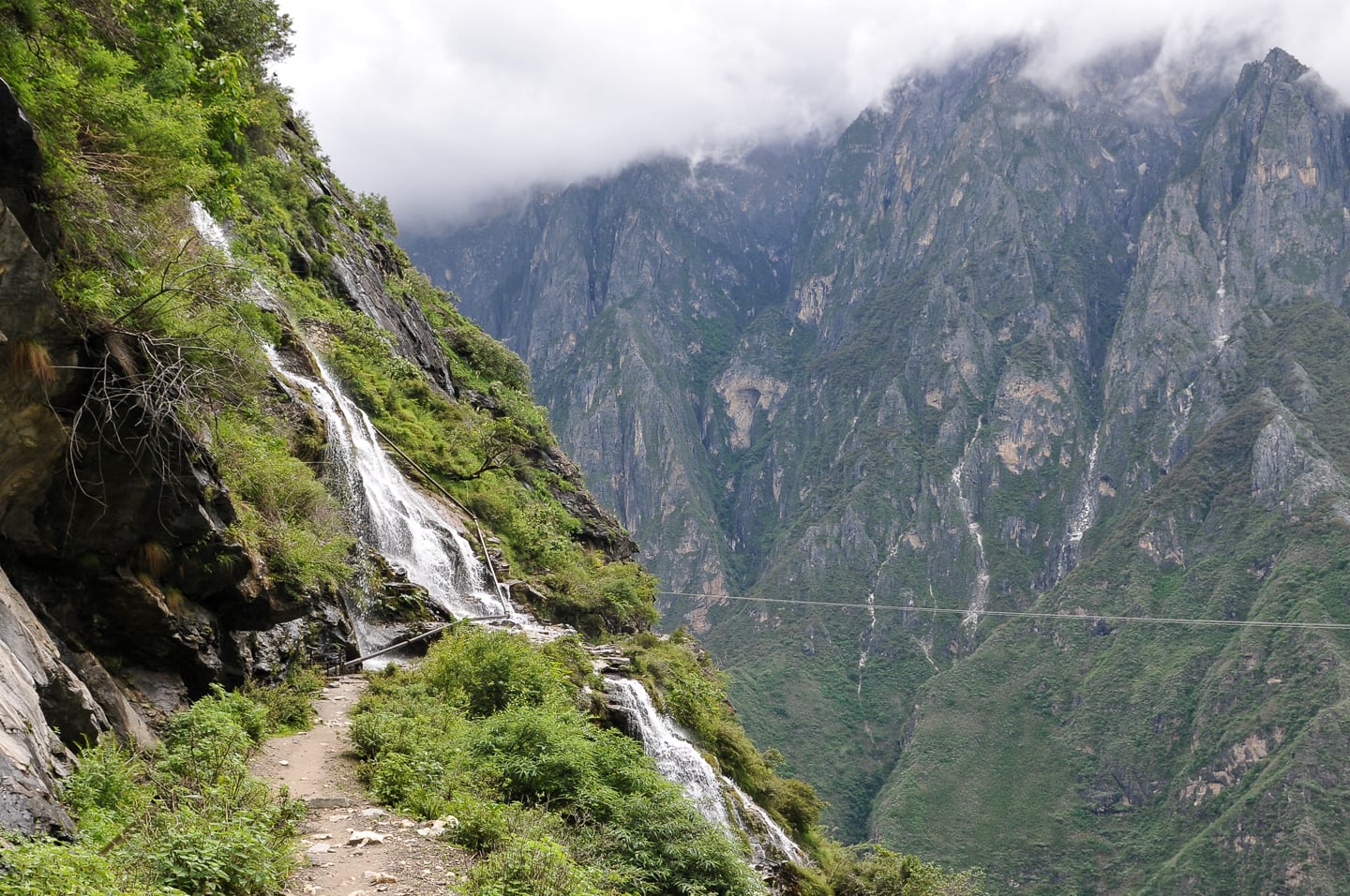 Where a trail once ran :: Slippery river rock, rushing water and a few-thousand-foot vertical drop added some spice to a jaunt in the mountains.

The swollen spring was our first of three on the trail — each somehow steeper, higher, more slippery and wetter than the last. Half way through slip-sliding over the second waterfall, we made the decision to trade any semblance of dry footwear for not sliding off a mountain to certain doom below. It was an easy choice. 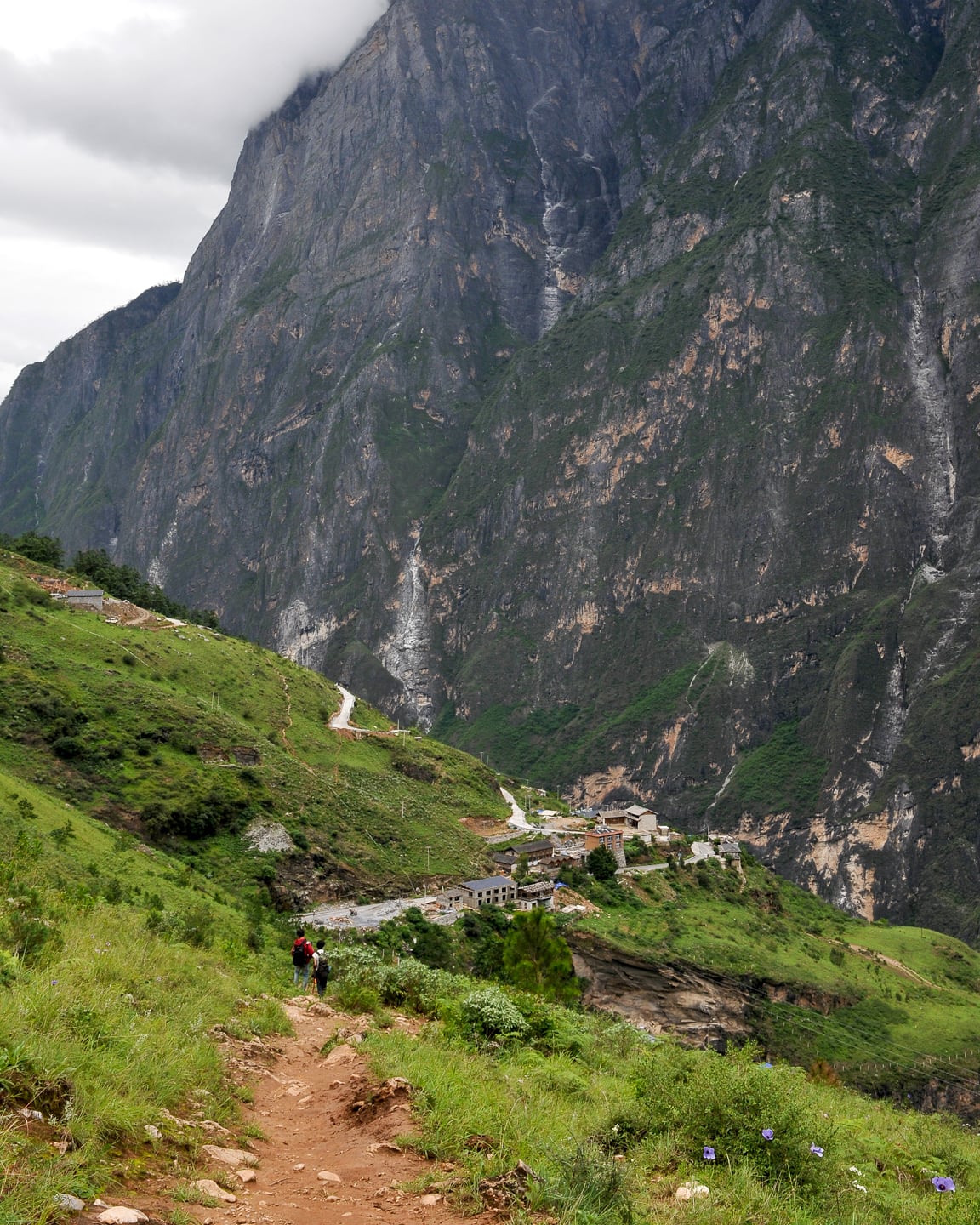 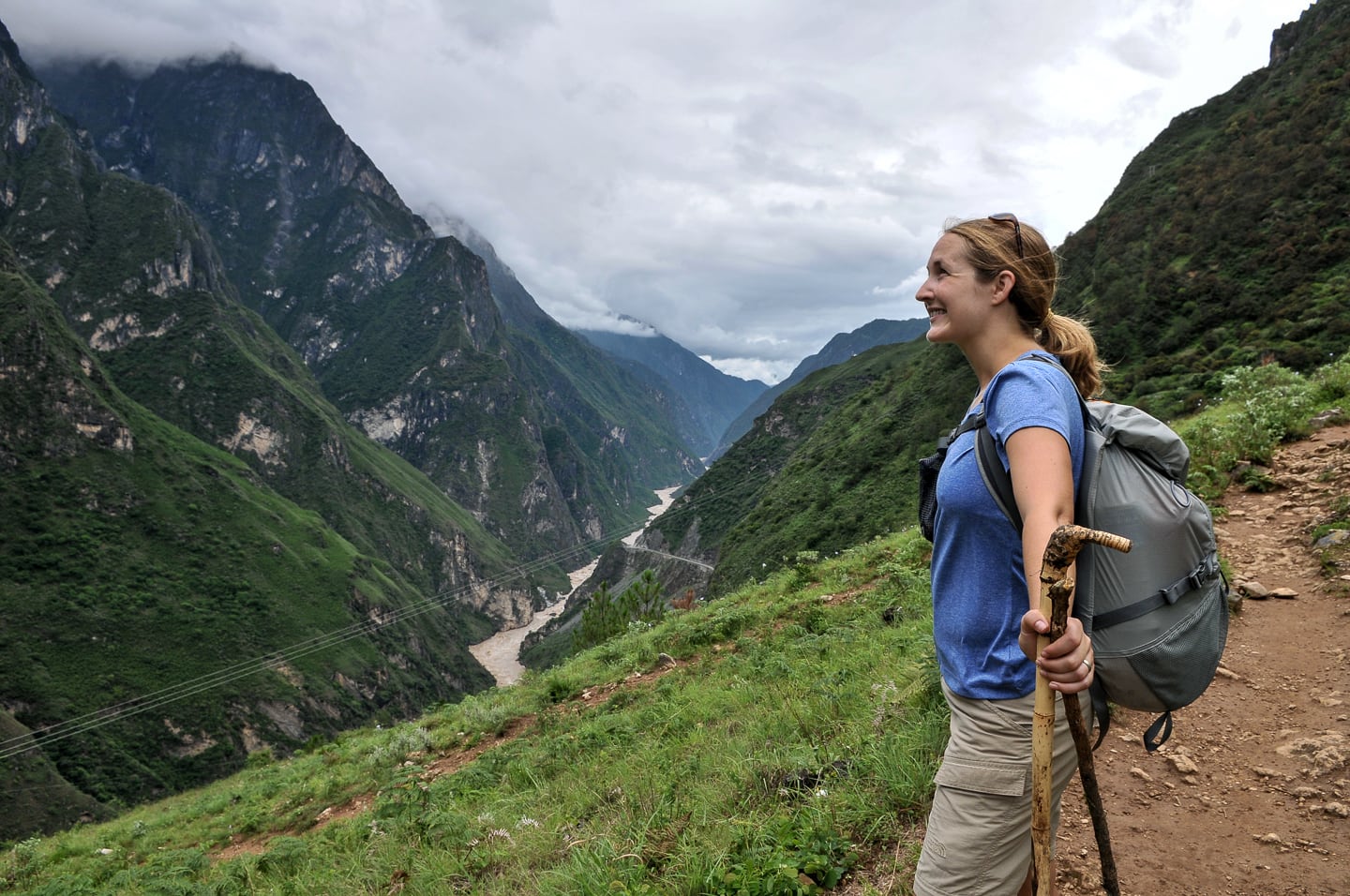 While Middle Tiger Leaping Gorge is the final destination for most trekkers intent on returning that afternoon, we decided to push on to Walnut Garden, a 45 minute walk down the paved highway. We planned to return the next day to descend into the canyon to pay our respects to the Tiger Leaping Stone and catch the bus to Shangri-la.

Hiking times between way-points proved largely unreliable on much of the trek, but we were pleasantly surprised to find that getting to Walnut Garden from Tina’s really was an easy 45 minute walk (despite the woman behind the counter at Tina’s telling us it took 2-3 hours!).

We were pleasantly surprised by Walnut Garden, finding it far more quaint and authentic than the area around Tina’s. If you have the extra time, it is definitely worth checking out. Once an integral part of the Tiger Leaping Gorge experience when trekkers were forced to utilize the ferry to return to Qiaotou or Lijiang, the new highway has rendered this part of the journey obsolete. We got the feeling that most trekkers these days opt to skip Walnut Garden altogether and head back from Tina’s. An absolute shame if you ask us, but then again, we essentially got the whole village to ourselves and ain’t gonna complain about that!

There are three or four main guesthouses in Walnut Garden, but we walked past the majority of them to the far edge of town where we found Woody’s Guesthouse (aka Chateau de Woody, aka Woody’s Hostel). We liked what we read in our guidebook and online and boy is it a find!

Perched on prime land for spectacular panoramic views of the gorge, Woody’s is about as idyllic as it gets. Great food, great prices ($12.50 USD per night with ensuite bath and hot water), peaceful, clean, incredibly friendly staff, awesome patio area, full of rustic charm, I could go on and on. And the best part was that we were the only guests that night — we essentially had paradise all to ourselves!

If you stay there, definitely go for the rooms in the older wood building with all of the charm and ambience. Don’t be lame and go for the “deluxe” rooms in the sterile cement annex across the street. 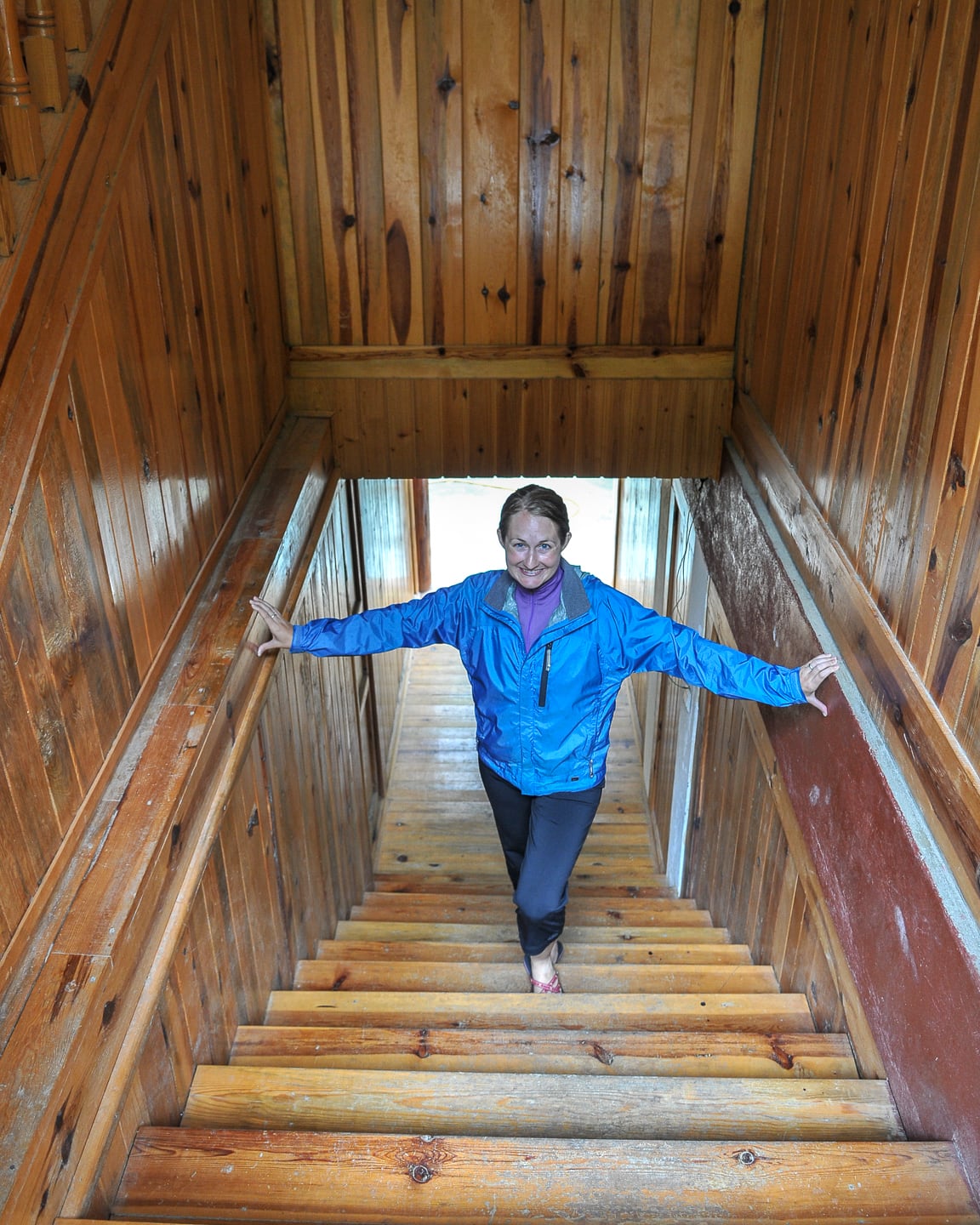 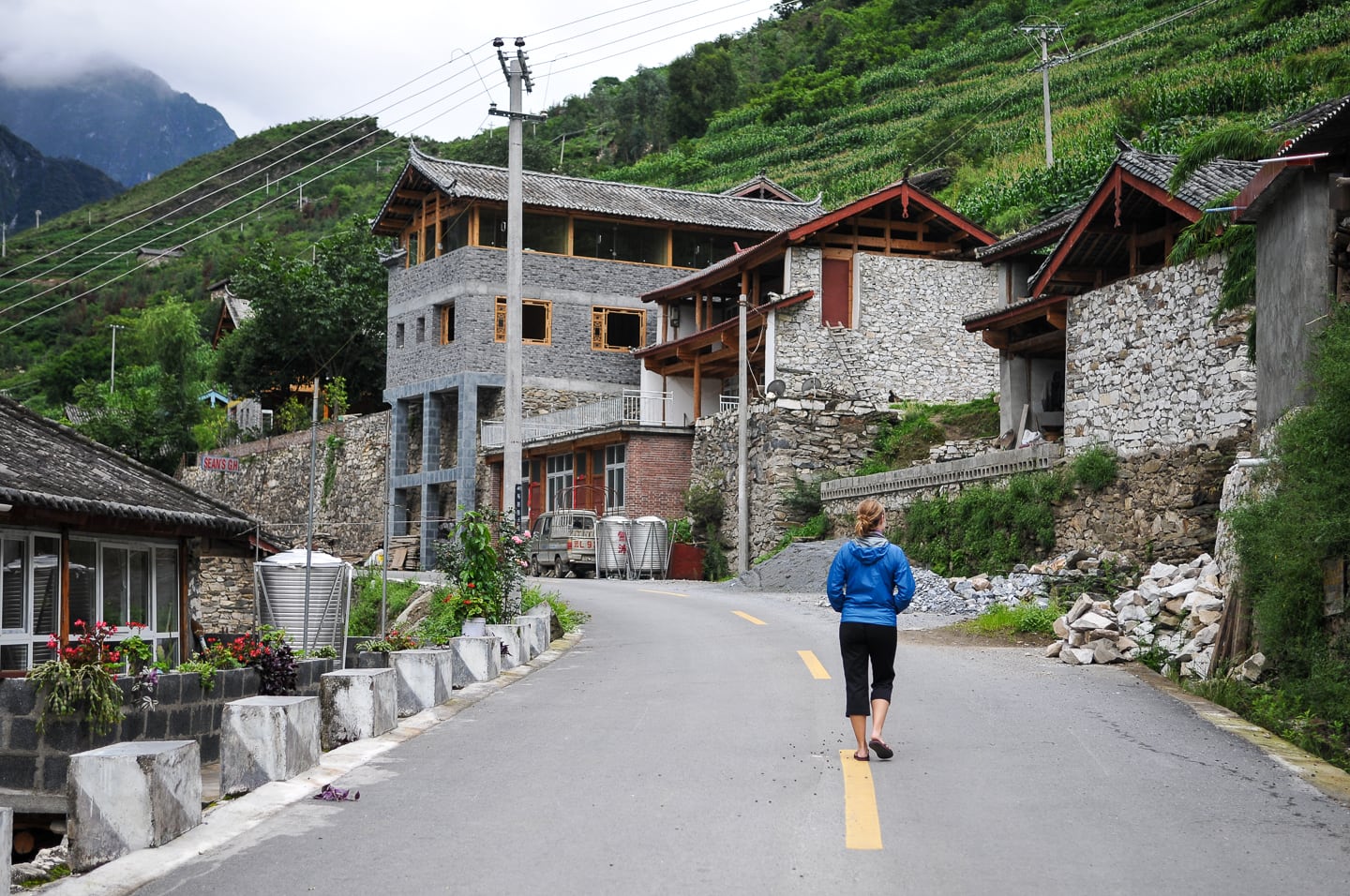 Stretching the ol’ legs in the village of Walnut Garden — cuz we just hadn’t punished them enough in the past few days.

One of the biggest surprises along the gorge was the condition of the two-year-old highway in many areas — in some places [like above] it was literally sinking into the gorge. In other places it had simply been washed entirely away by mudslides during the rainy season. I’d like to blame it on the incredibly challenging terrain and climate in these here parts, but tend to believe there’s much more to the story. 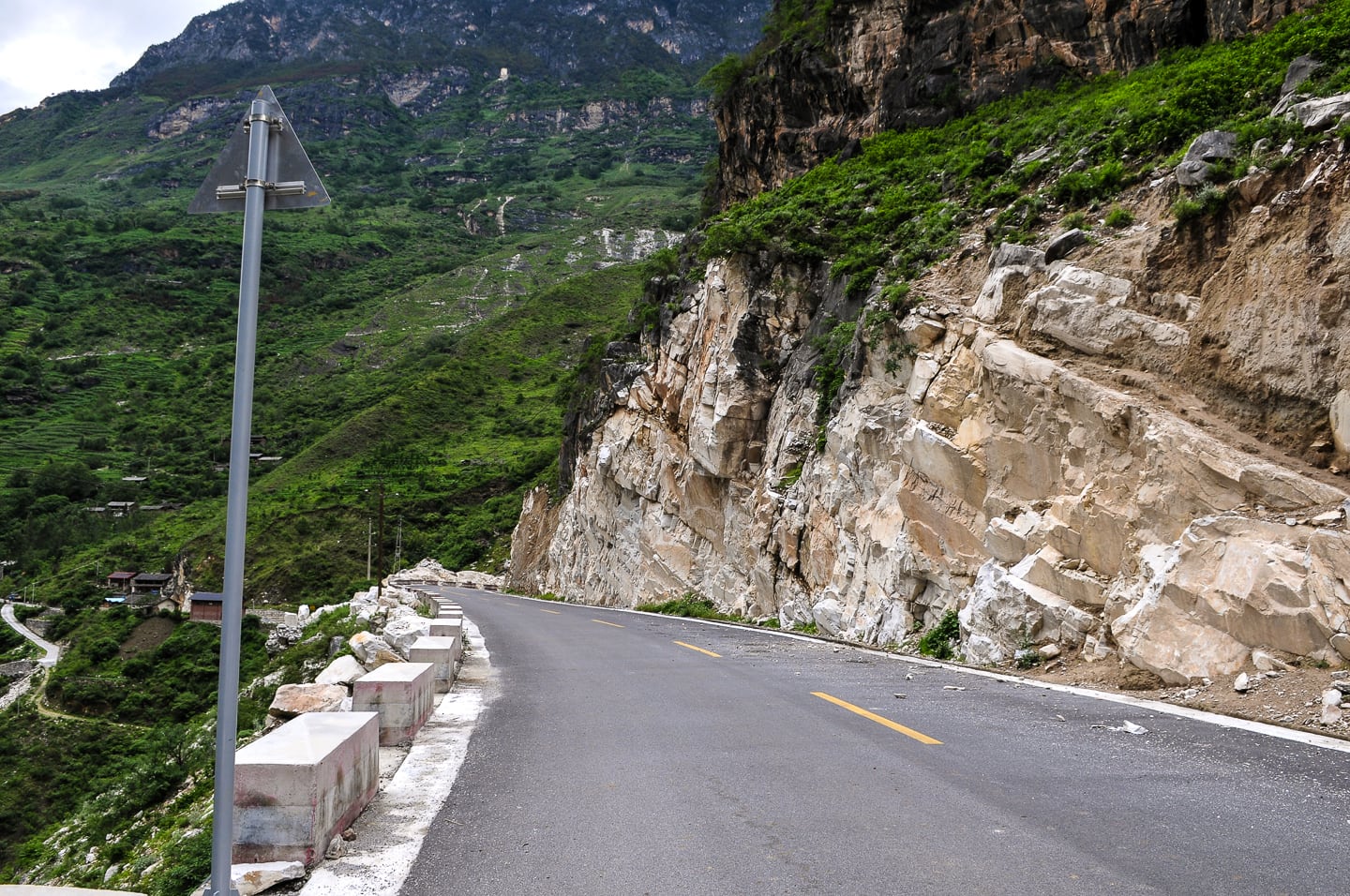 Like most infrastructure projects we saw in China, the highway through TLG appears to have been done in quite the hurry! In areas where whole mountainsides were blown away, the highway is littered with huge boulders which presumably had fallin from the exposed hillside. The area around the corner from here was the worst, and we jogged through in an effort to reduce the chance that we may find ourselves in the wrong place at the wrong time (hence the lack of a good photo). Some good ol’ fashioned rockwall netting would do the trick and doubtless save property and even lives, but it seems that’s not really a priority at the moment…

11:15a — Pass through Halfway Guesthouse