Railay (aka Rai Leh), what can I say. Paradise — even during the off-/shoulder-season. Lori and I kicked it here for the better part of five days.

In recent years, Railay has become a mecca for climbers, given its sheer limestone cliffs and beautiful scenery. However, the belief that climbing is front and center and the peninsula is swarming with climbers is a bit of a misconception. Granted, we didn’t stay on the more remote and lesser frequented Tonsai beach (reputed to be the preferred choice of young laid back rasta-lovin’ climber-travelers), but we were hard pressed on most parts of Railay to find much climbing culture.

Of course there was daily climbing going on at a handful of places, but the culture wasn’t akin to, say, Koh Tao’s SCUBA culture, where nearly everything on Sairee Beach is permeated by diving — the talk, the dress, posters, names of bars and resorts, etc. We found most of Railay to be far more upmarket with an older clientele than originally anticipated.

Something else that’s not properly conveyed by travel guides is also the crunch of day trippers that descend daily on Railay. Most days, we were able to avoid the 10-3p crunch hanging out at our relaxing cabana or going on a day trip ourselves. Railay also has some nice little hikes away from the crowds which we’ll cover in a future post.

Travelers often refer to this area by the provincial name, Krabi, but this can refer to a lot of places within Krabi province including Ao Nang, the major beach in Krabi, and Krabi Town — neither of which are Railay.

Railay is a rocky peninsula comprised of towering limestone peaks edged by white sands. Although it is connected to the mainland it is virtually cut off from the rest of Thailand due to the sheer karst cliffs that make up the northern boundary of the area. There are no roads in and out of the area and thus all people and goods must be brought in by boat as they would be to an island.

There are three major beaches around the peninsula, each very different from the others.
Railay East is a beautiful stretch of mangrove (though the mangroves are slowly disappearing due to development). This is the point of entry for those taking the boat from Krabi Town 20-45 minutes to the east. At the northern end of Railay East, there is a large enclave of budget restaurants and bars. Beyond this lies the area known as the highlands (or headlands as written by some). We stayed about a 10 minute walk up into the highlands.

Moving clockwise around the peninsula is Phra Nang (Princess Beach), Railay’s best beach and arguably one of the best in Thailand. This beach is accessed via a paved path which takes you through various cave mouths and monkey territory (there are dozens of them here in the evenings).

From 10am to 3pm, Phra Nang is overrun by dozens of longtail and speedboats bringing hundreds of daytrippers as Phra Nang Cave (at the southern end of the beach) is a popular stop on many boat tours of the area. The number of people can be overwhelming, but if you’re staying on Railay, after 4pm the beach can be virtually deserted (outside of high season).

North of Phra Nang is Railay West beach, the largest swimming beach on Railay where most of the development efforts have been focussed.

Finally, to the north of Railay West is Ton Sai beach, a nice palm-lined stretch of sand with a chilled out vibe, but challenging to get to — you either have to scramble over a couple hundred meters of sharp rocks through a series of caves from Railay West, make your way via a jungle path over a hill from the highlands, or hire a longtail or kayak. It appears you could probably swim there from Railway West, but surf and sharp rocks would make it a bit challenging.

Our first day in Railay was a bit stormy (as was our last). But every day in between was beautiful. The photo above was taken on our first afternoon of the longtail boats at Railay West looking out towards some of Railay’s magnificent limestone cliffs and Ton Sai beach in the distance (at left).

Getting here was easy enough. We had breakfast at a cafe on the road to the pier. On our way down, we were asked by a boatman whether we were going to Railay. He currently had a few passengers and would go when he had eight (pretty standard). We asked him to let us know when he had six and went to have breakfast. Afterwards, we headed down to the pier, climbed on and headed out. The trip cost 150 baht each (about $4 USD) and took about 25 minutes. We had been told it would be this much (pretty much a set price). The boatmen seemed to be more legit and on pretty laid-back/ hassle free, unlike a lot of other places we’ve been. It’s a beautiful ride out, usually on a covered boat, so if you head out there, makes sure you have your camera ready!

Railay is not generally known for budget accommodation. Most accommodation off of the main beaches are mid to upper range, starting around $30 USD per night. Ton Sai beach has much cheaper digs, but we didn’t want to be that isolated (it’s not the easiest thing getting to/from Ton Sai). We heard that the highlands had some budget choices and were keen on trying out Railay Cabanas (aka Railay Cabana Bungalows, aka Railay Garden View Bungalows). The place has virtually no internet presence and neither of the two phone numbers we found worked. However, it was listed in our guidebook with directions, so we figured we’d walk up there on arrival.

Now, let me say that Railay Cabana bungalows was just creepy — almost post-apocalyptic. On top of having no working phone number or internet presence, the place was absolutely deserted and in a very sorry state. The bar/restaurant looked as if it hadn’t been used in years and the “bungalows” were more like a collection of rotting shacks. We walked around the compound for a good 10 minutes trying to find anybody to show us one of the shacks but to no avail. We waited in the reception area for a bit longer until I decided to head back down the road to check out one of the other places nearby.

The far nicer looking place on the corner had a hand-written sign posted that read “Ask about our cheap cabanas,” and that’s just what I did. A friendly young man led me with keys to one of their cabanas, a spiffy looking place (probably the nicest cabana/bungalow we’ve stayed in). I took a quick look around — lacquered trimmings, large covered porch, really nice construction — and asked the price: 300 baht (about $10 US) — the same price as we had read the creepy bungalows up the street were and much, much less than what our travel guide said they should be. I was sold.

I literally ran up to Lori at the other place (who stayed behind to watch our big backpacks and wait for someone — no one ever came). I gave her the thumbs up and tried to get us out of there as quickly as possible before the same monster that ate the staff and other residents came for us. 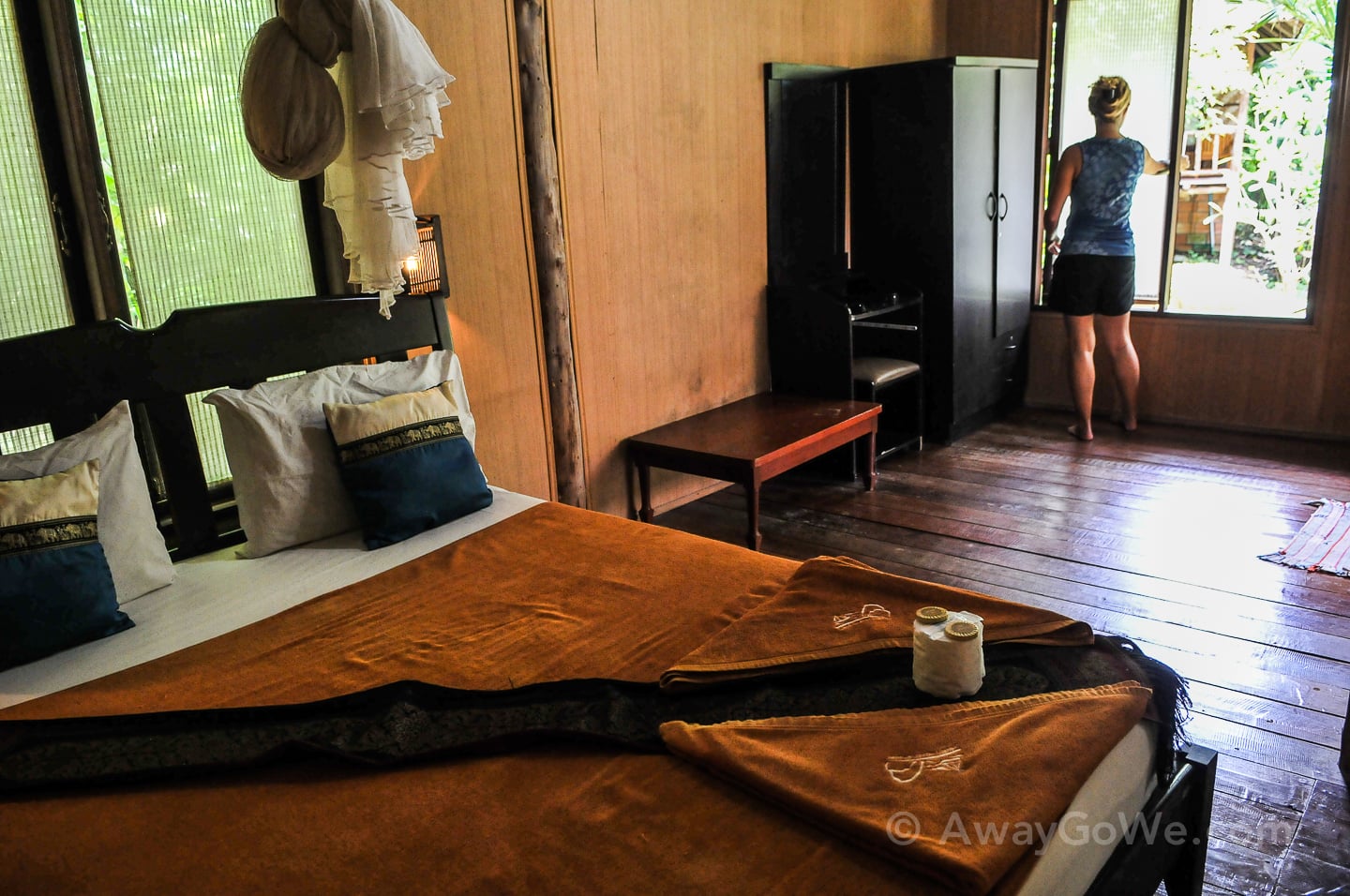 This is probably a good time to mention that October is a great time to visit Railay. You’ll still get a few showers throughout the day, but the weather is improving day-by-day moving into the dry season, yet the droves of tourists haven’t begun in earnest to descend upon its beaches. As a result, you can get some pretty good deals on lodging.

Late September / early October is actually a nice time to visit Thailand’s beaches on both the Andaman Sea side and Gulf side if you start on the Gulf side first and work your way west. While the weather may be a bit iffy, it’s shoulder season (just beginning to move into rainy season on the Gulf side and out of it on the Andaman side). So prices are low, crowds are smaller, but you’ll still get some gorgeous weather interspersed with cloudy days and a few storms. Just don’t go expecting the weather to be crystal clear — that doesn’t really happen until December/January. But on a sunny day, the weather is certainly nothing to sneeze at as many of the photos below can attest to. 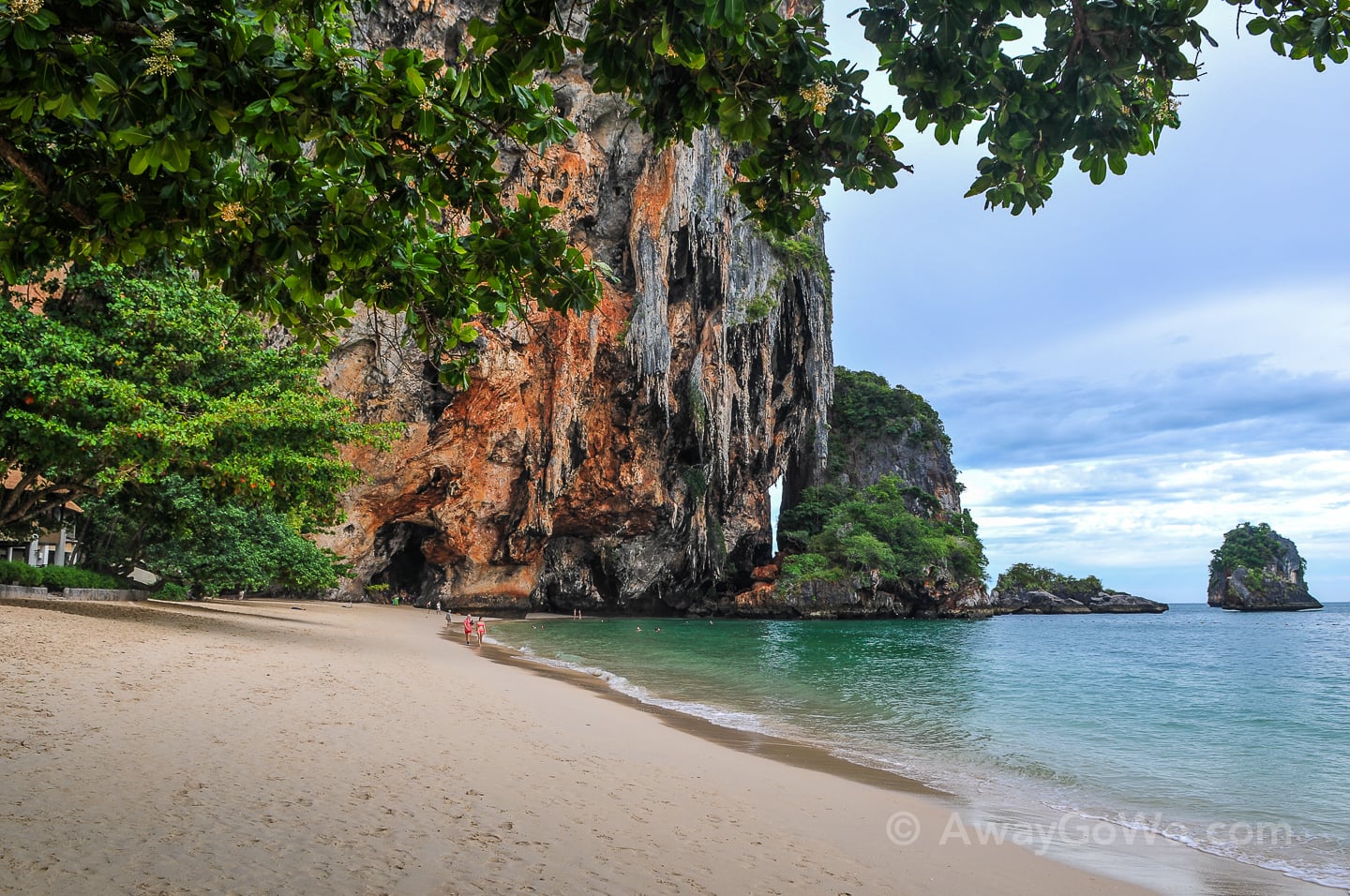 You’ve got swimming, kayaking, cliff-jumping (people do it off the rock to the far right of the screen into an area marked by buoys), rock climbing (ropes just off the photo to the left), not to mention the cave through the mountain to the other side (in the center of the photo) that’s worth exploring. 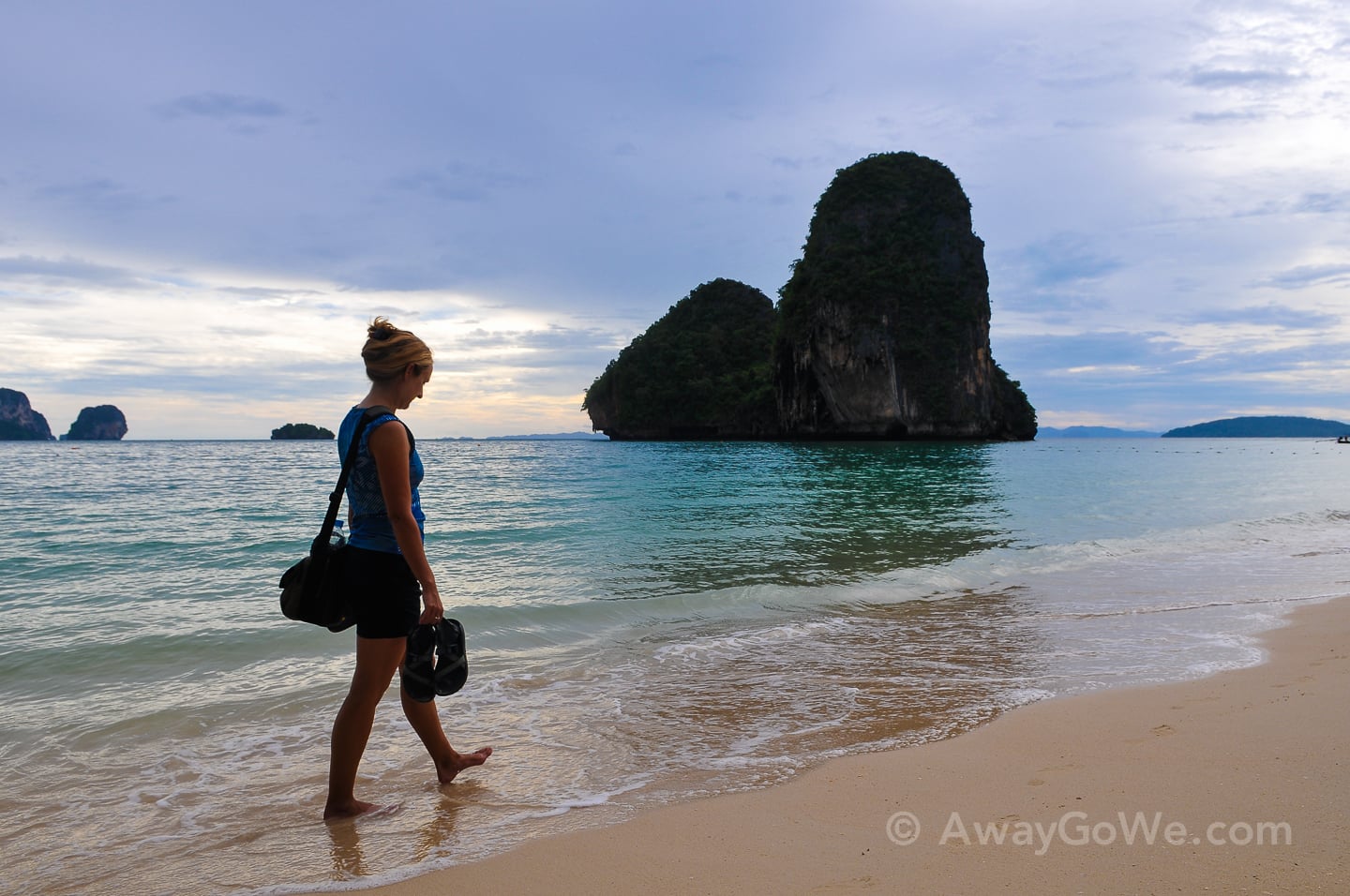 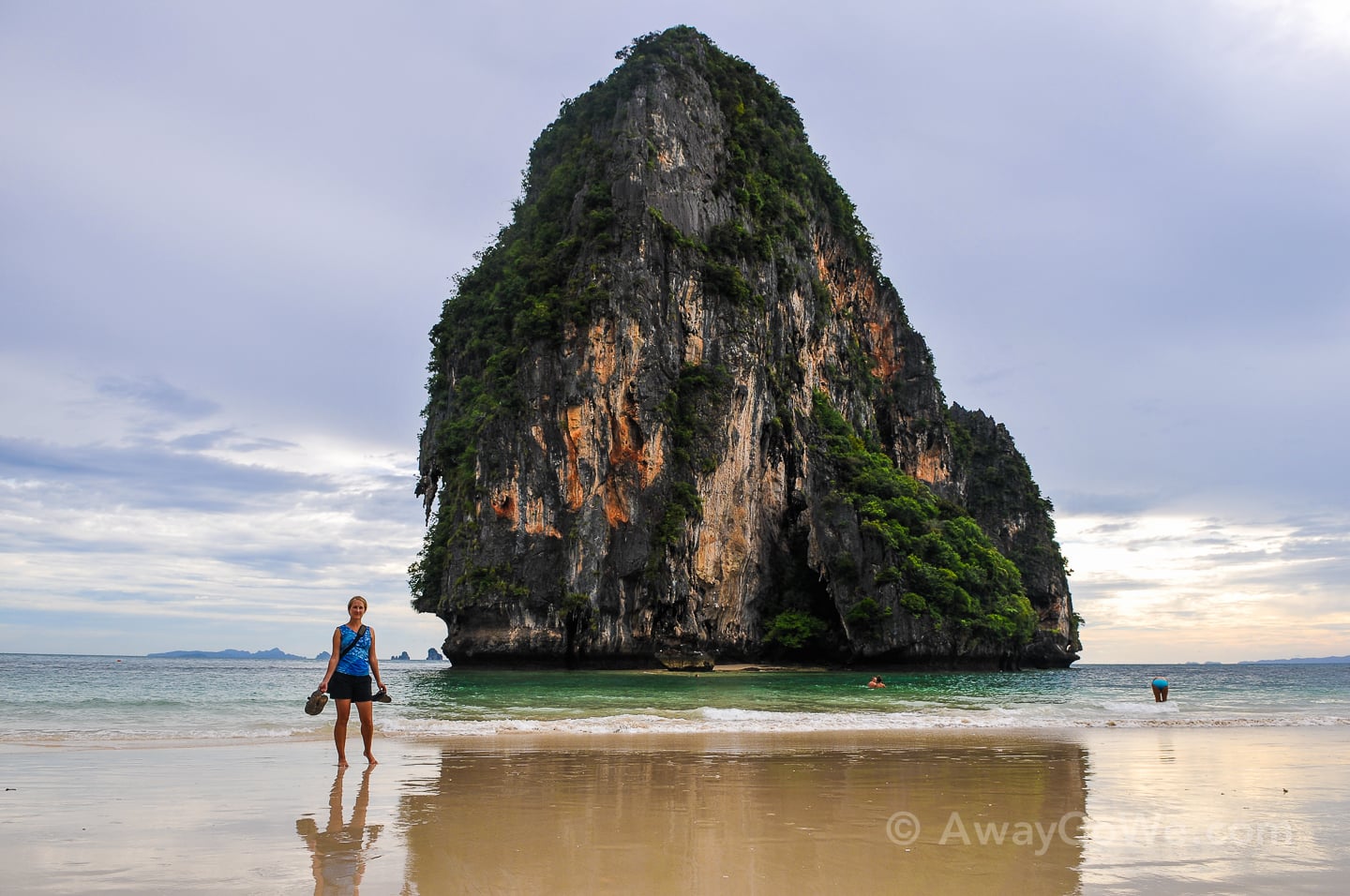 To top it off, Phra Nang Cave (also just to the left of the edge of the photo) is full of carved wooden phalluses of all shapes and sizes, offerings to a princess believed to have drowned near here (there’s a whole story as you might expect) that locals believe brings fortune and luck. Oh, and did I mention this beach is teeming with snack-snatching monkeys! Keep a close eye on all of your possessions. Seriously — they descend from the trees ninja style and will take whatever they can get their grubbies on. 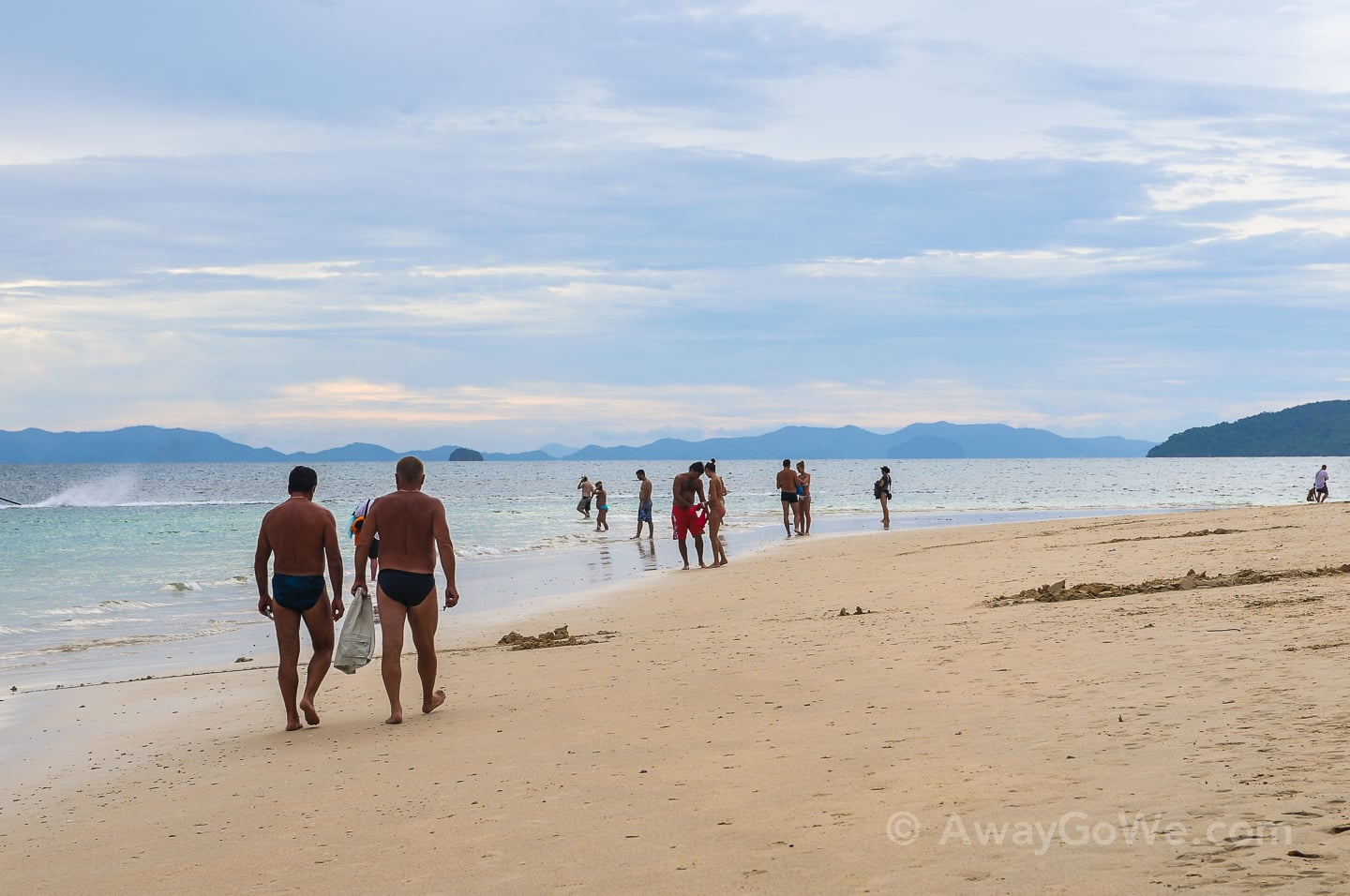 Typical middle-aged European men walking the beach together. Moments earlier, they could be seen frolicking and giggling together, kicking beachnuts back and forth — It’s not what you think, apparently…they eventually met up with their bikini-clad wives at the end of the beach (though they were quite the entertainment). 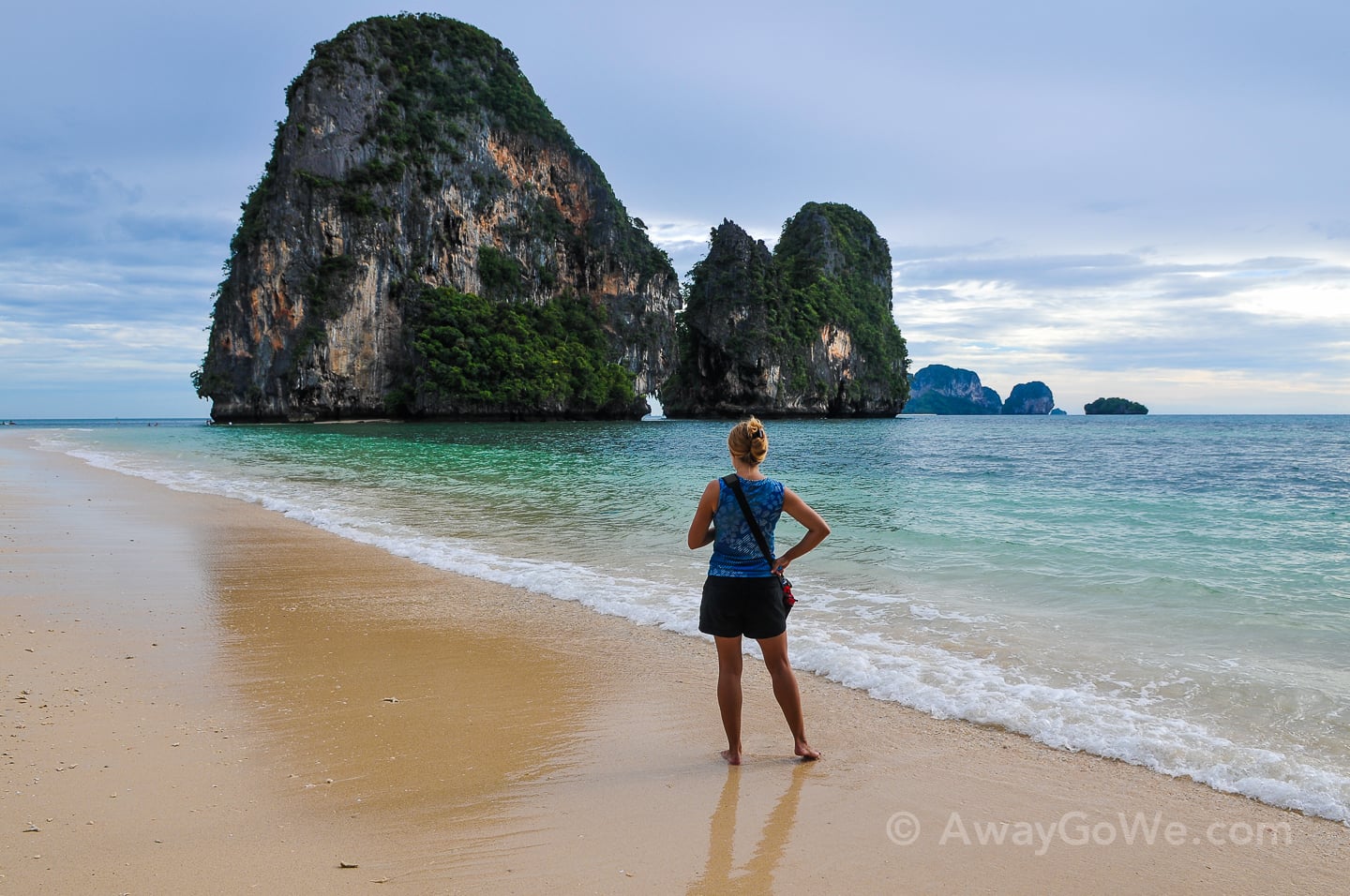 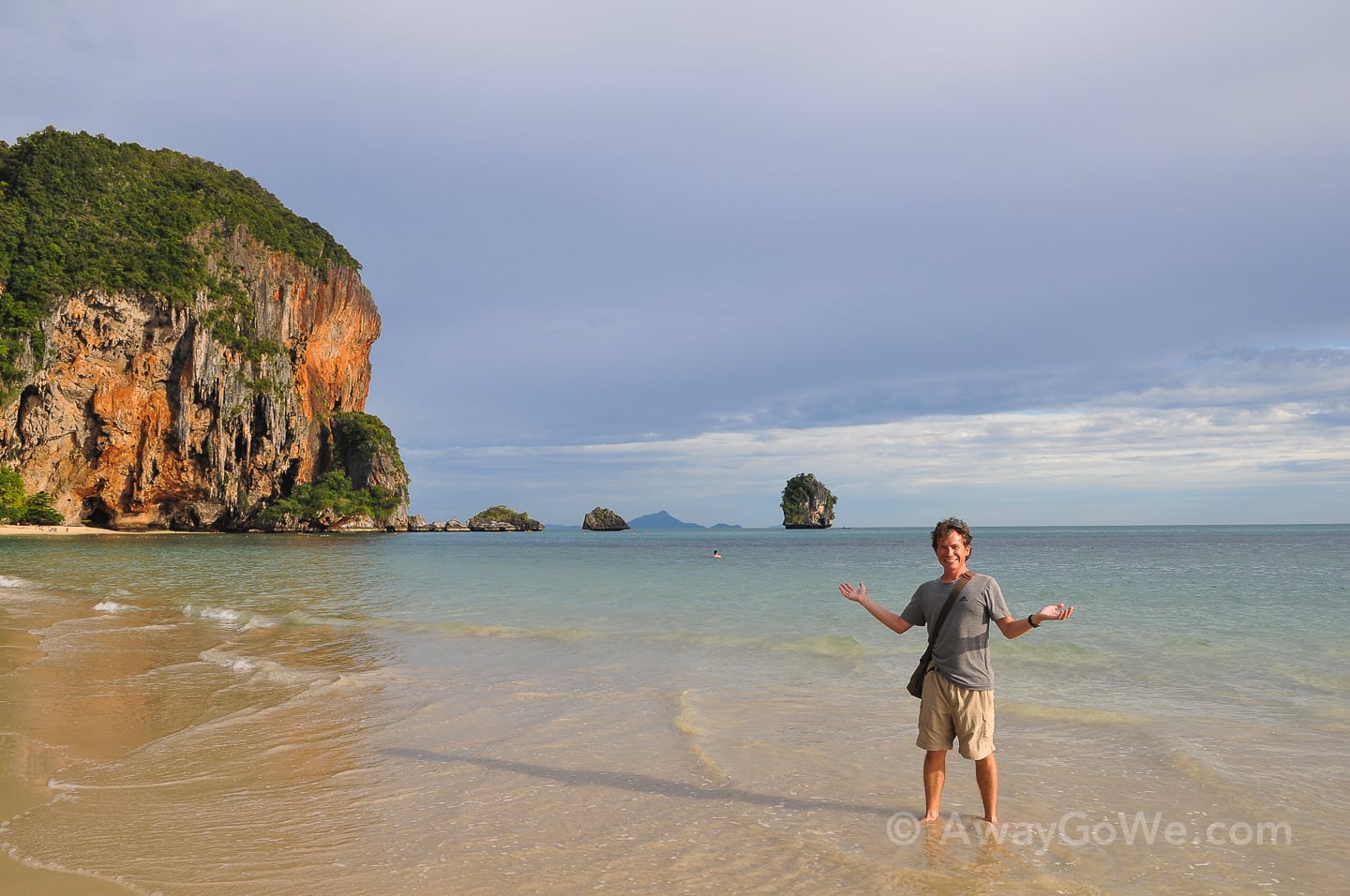 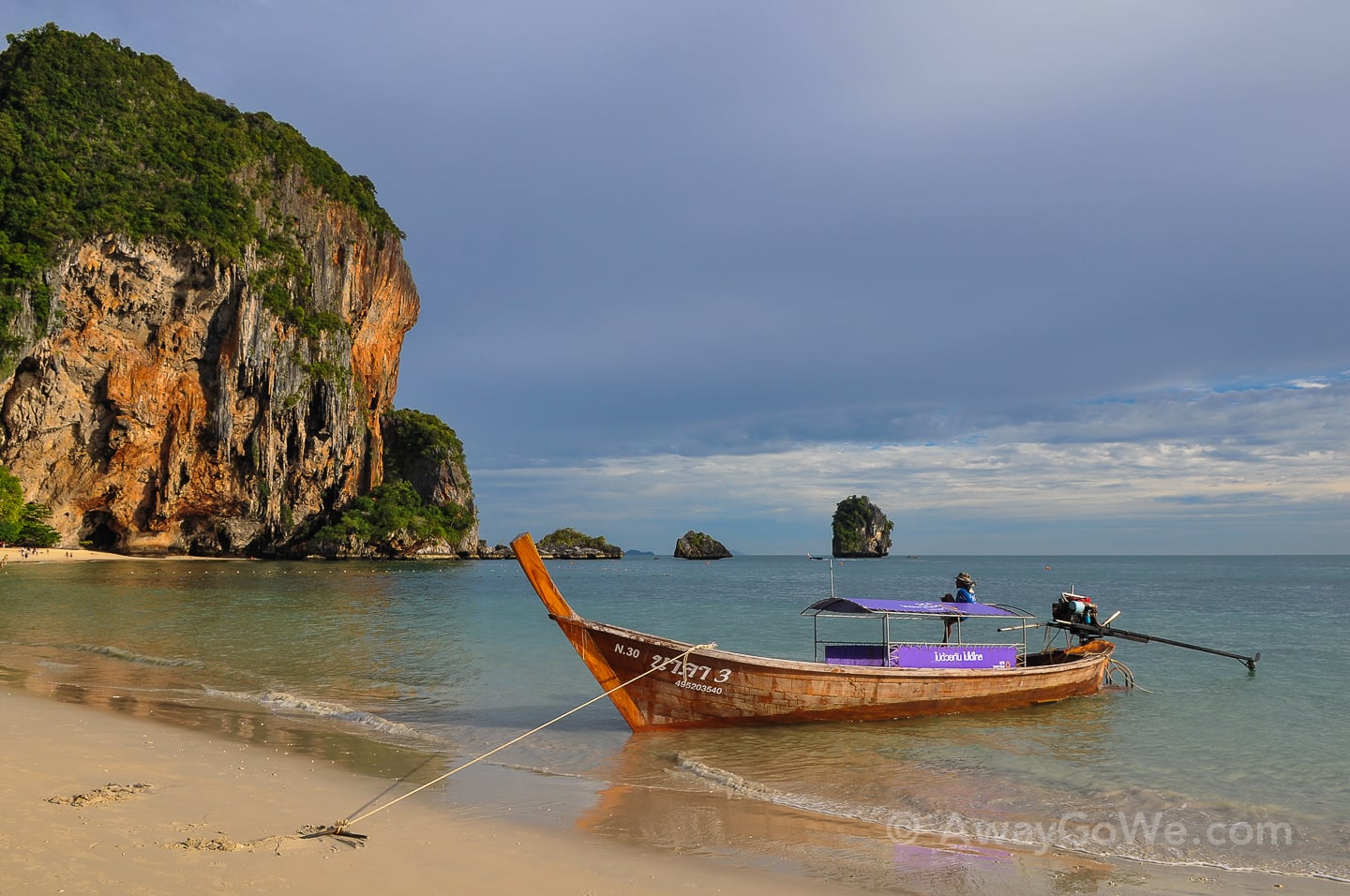 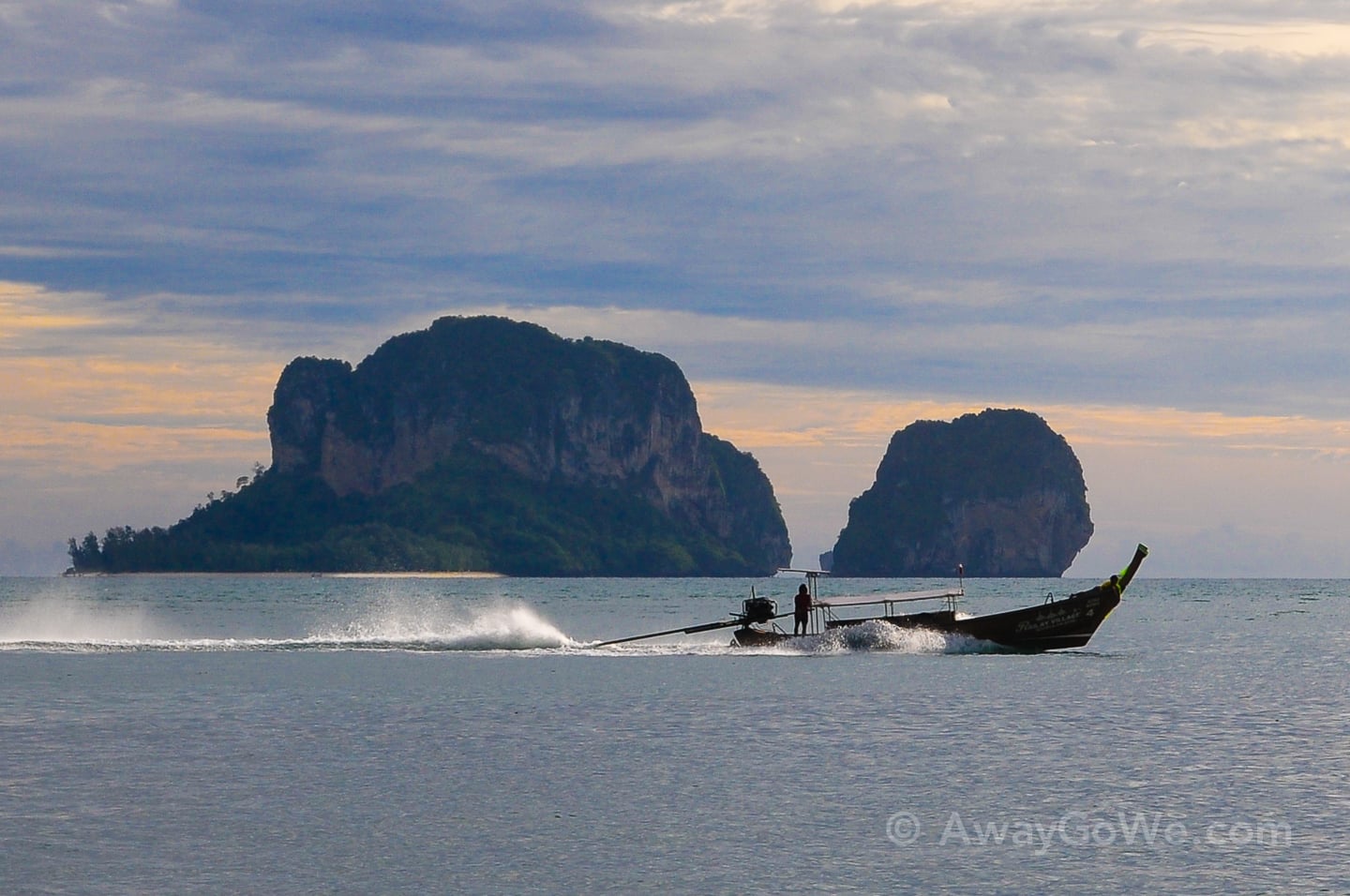 Needless to say, we spent a few evenings watching the sunset on Phra Nang.

There aren’t really many services on this beach, save for the luxury eco-resort, Rayavadee, which runs the length of the beach. Tastefully incorporated into the natural surroundings, Rayavadee offers two restaurants and a cafe, but their prices, as you can imagine, are steeper than most other places.

Lori and I are perfectly content with packing in our own sundowners. We got these two beauties of Leo [below] from the nearby minimart on southern Railay East, but FAR better deals can be had in the half dozen or so mini markets interspersed among the budget restaurant quarter at the northern end of Railay East…just FYI.

Thanks for sending more fabulous photos and your impressions of things you have experienced. Keep those suntans!

Amazing! When I saw the first photo, at the top, I heard the Pirates of the Caribbean theme in my head. There are some lovely photos of Lori in this report, too. You are really seeing some wonders of the world together! Thank you for sharing them! Love to you both!