We arrive at the bottom of the world, Cape Agulhas, and boy is it cold! This is still Africa, right? 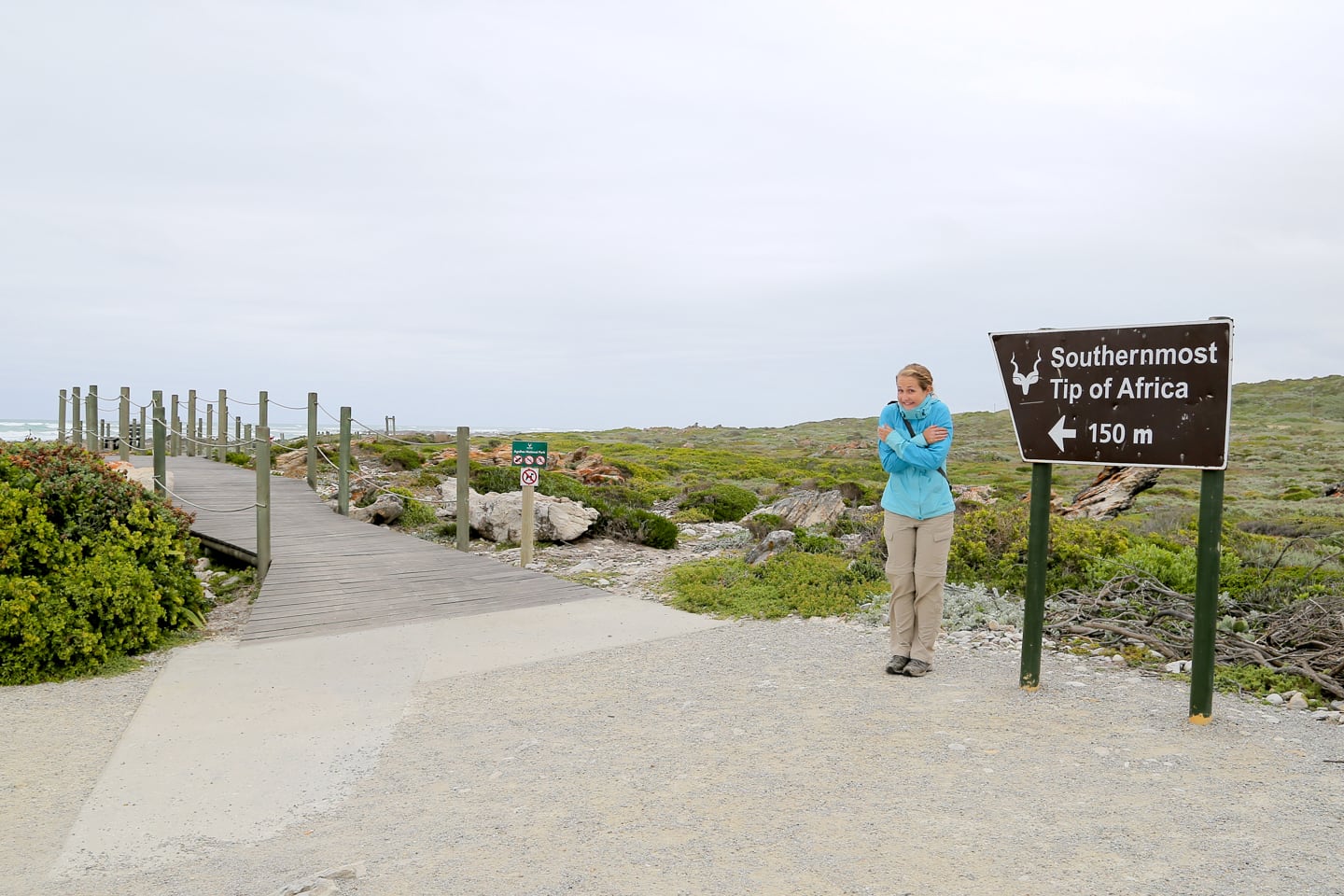 Lori and I reached Cape Agulhas, the southernmost tip of Africa yesterday (September 10th) on our fourth day of our road trip around South Africa, and 10th day of our 103-day backpacking adventure from Cape Town on up to Kampala, Uganda. 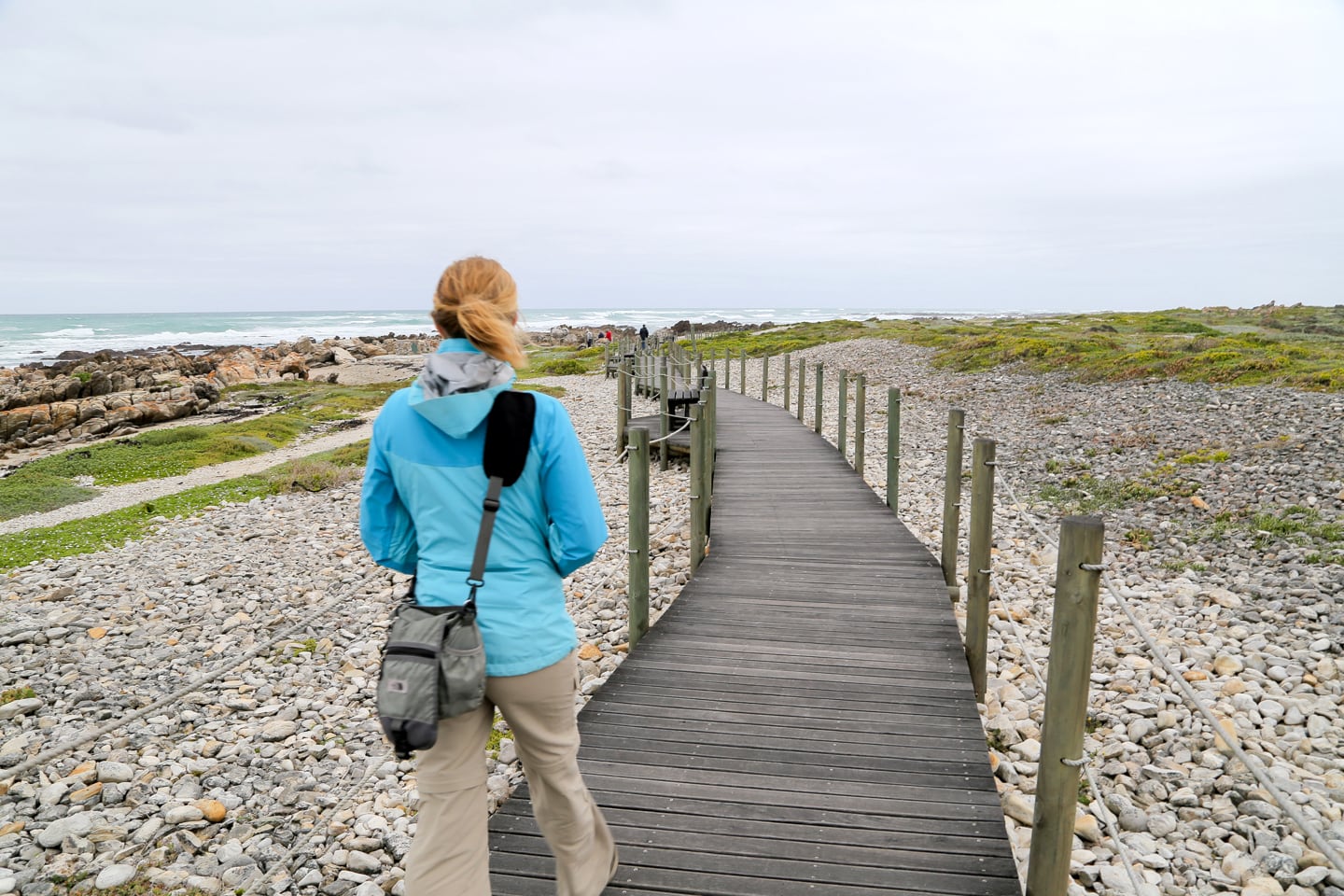 This particular part of South Africa feels like no place in Africa I’ve ever been. If anything, it feels more like Scotland or even parts of the U.S., with its rugged coastline, cold, driving wind and scrubby, scraggly vegetation. It feels very much like a no-man’s land down here, and appropriately so. It’s very much how you would expect the edge of the world to feel. 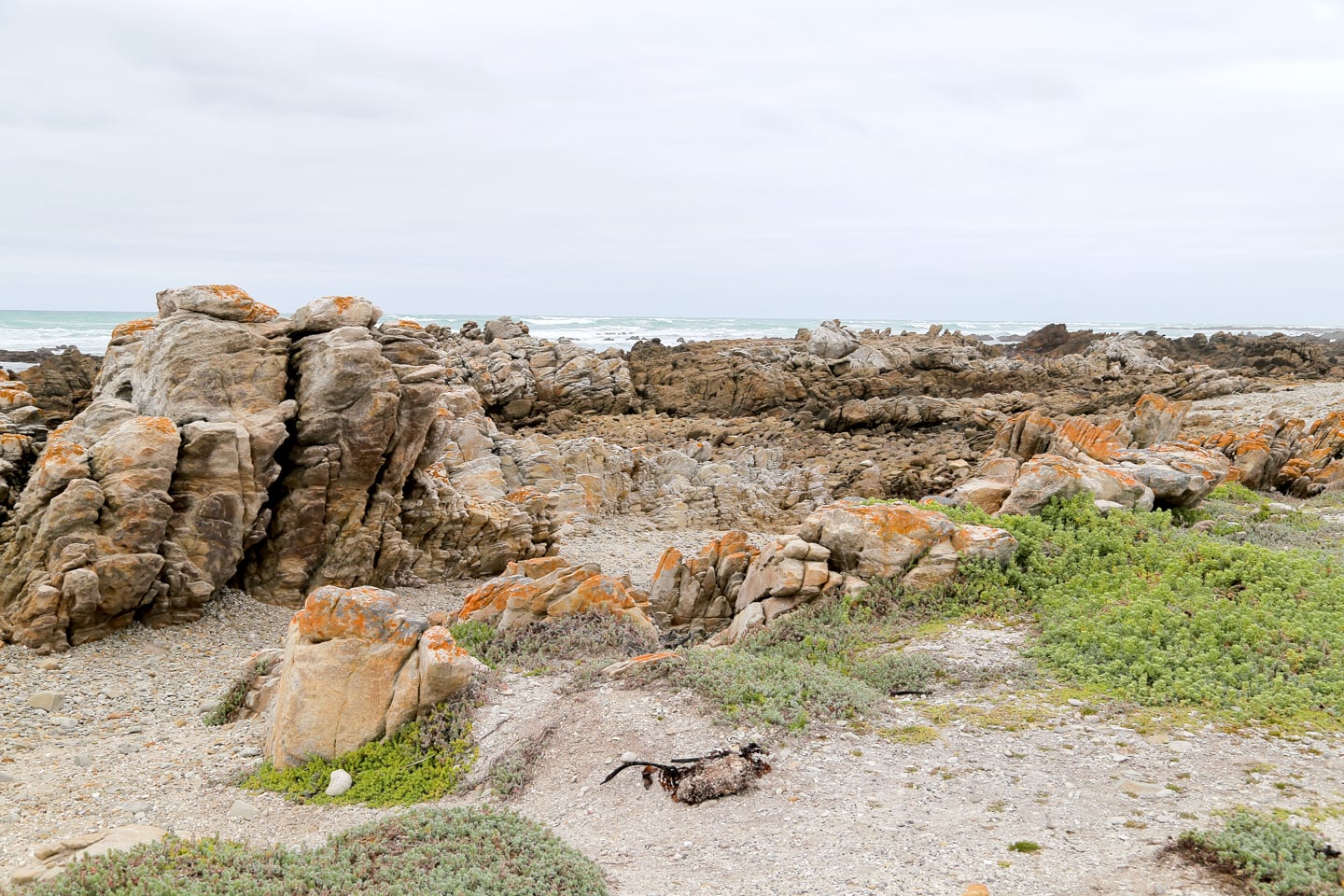 The rugged, rocky coastline is unforgiving, as the numerous wrecks scattered along the shore here can attest to. 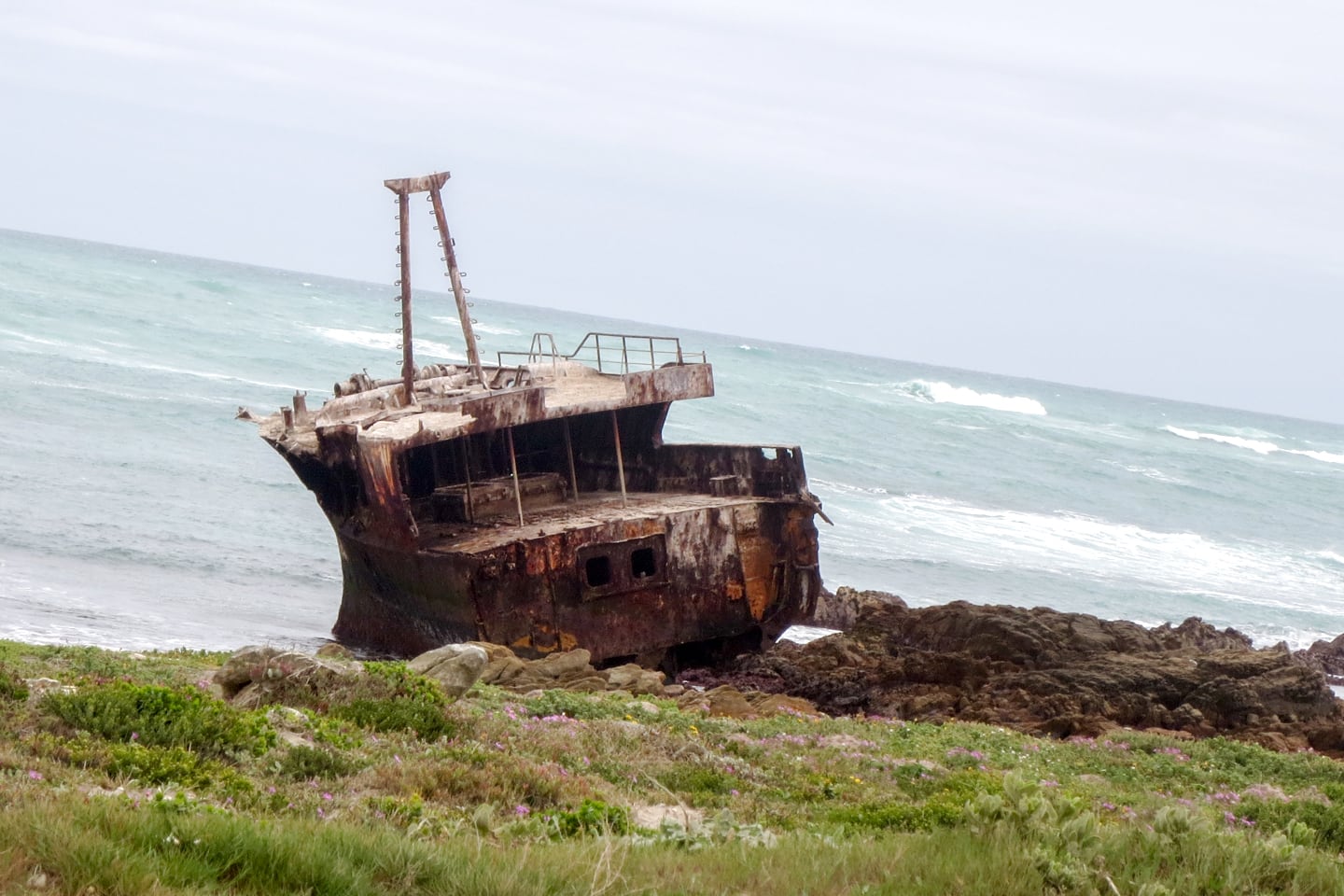 Despite what many believe, the Cape of Good Hope is not the southernmost tip of Africa, but Cape Agulhas, a few hours southeast of Cape Town. It seems that not many people get down here, sadly. On this particular day, we saw one other group coming and one other couple going. But it was midweek, off-season and bloody cold, so that could have played a role as well. 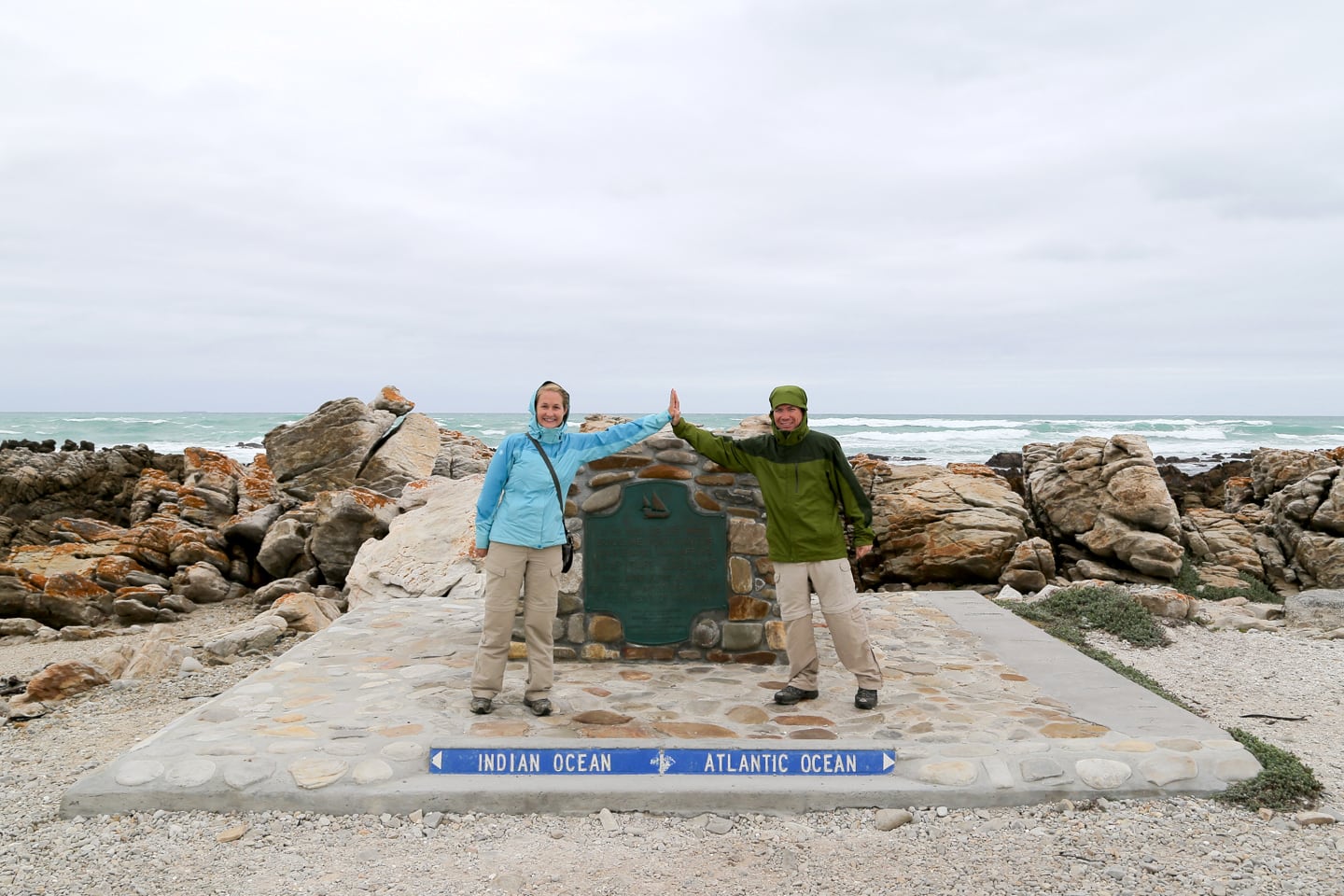 On our left, leaving the frigid waters of the southern Atlantic Ocean behind. On our right, hello again, warm and wonderful Indian Ocean! 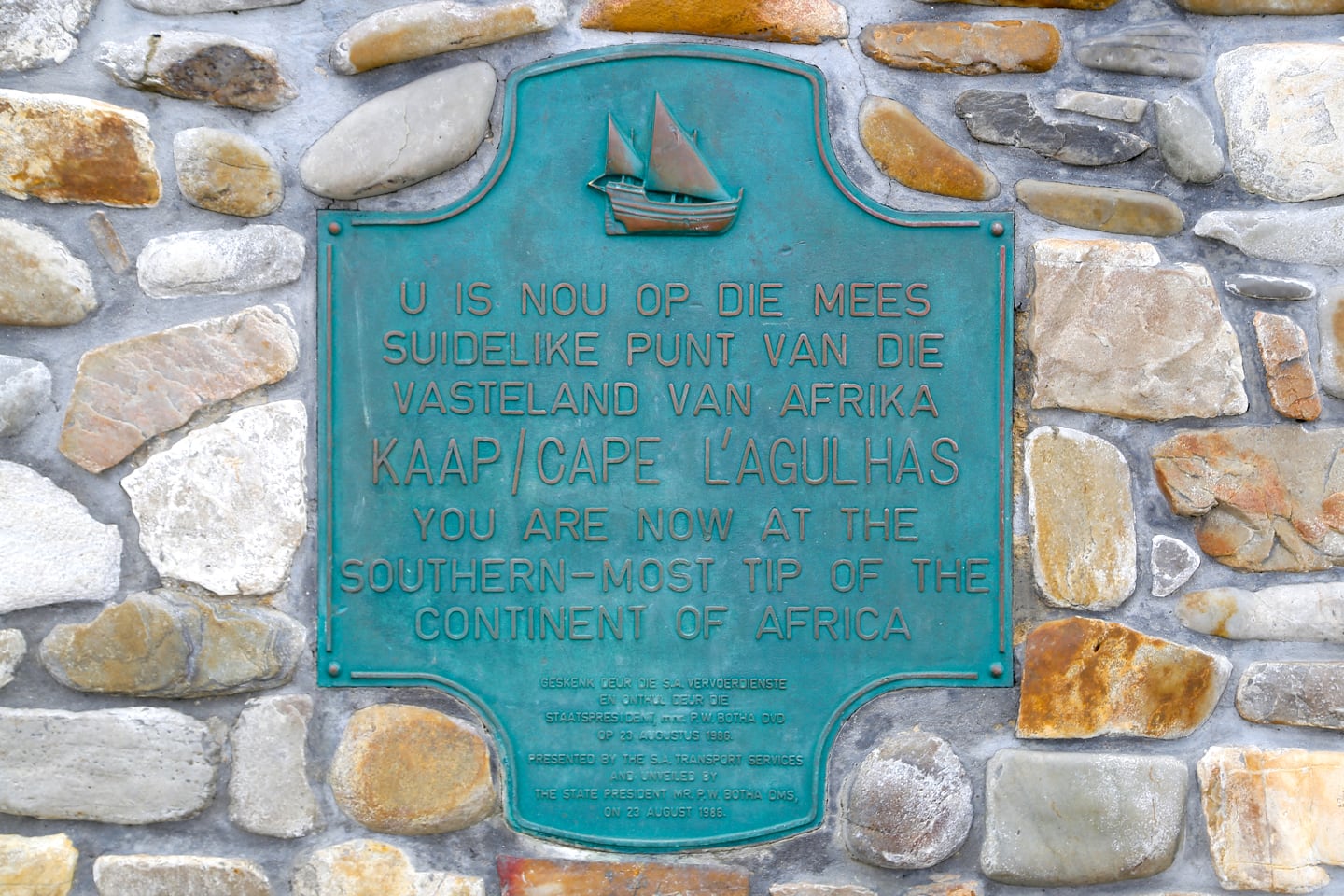 “Cape L’Agulhas — You are now at the southern-most tip of the continent of Africa,” also translated into Afrikaans, if you’re so inclined… 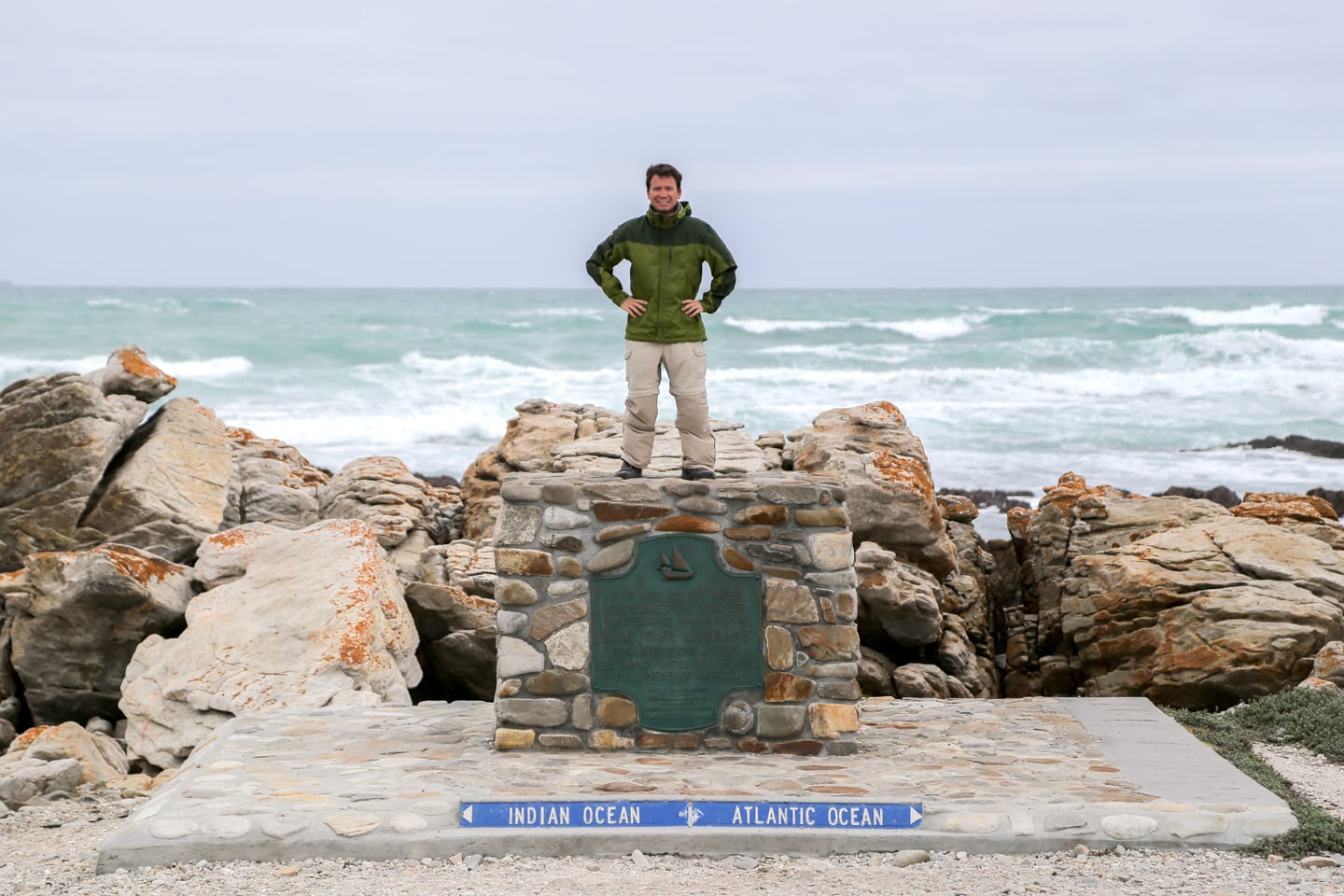 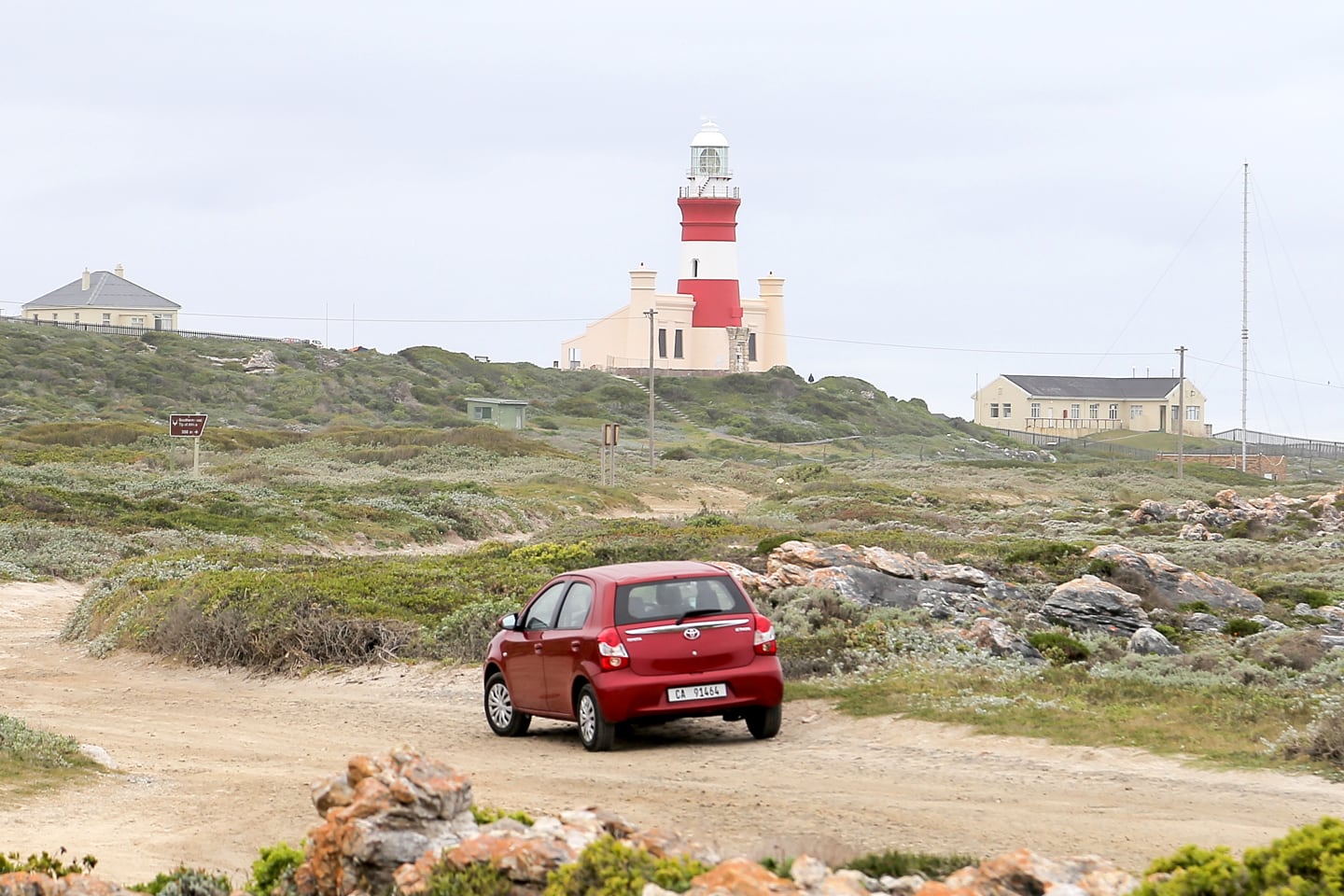 Cape Agulhas is also home to South Africa’s second oldest lighthouse, which has guided ships around this treacherous point (with mixed success, apparently) since 1848.

And that’s our ride for the next three weeks, which we affectionately call “Mini Red.” There seems to be a theme going with us and vehicles these days. The only red car (out of a garage full of silver and white cars) at the rental car place…go figure.

After leaving L’Agulhas, we embarked on the longest day of driving so far on our trip. For the next six hours or so, we left the cold and dreary coastline to climb high into the Klein Karoo, following Route 62 (this region of South Africa’s answer to Route 66, apparently). 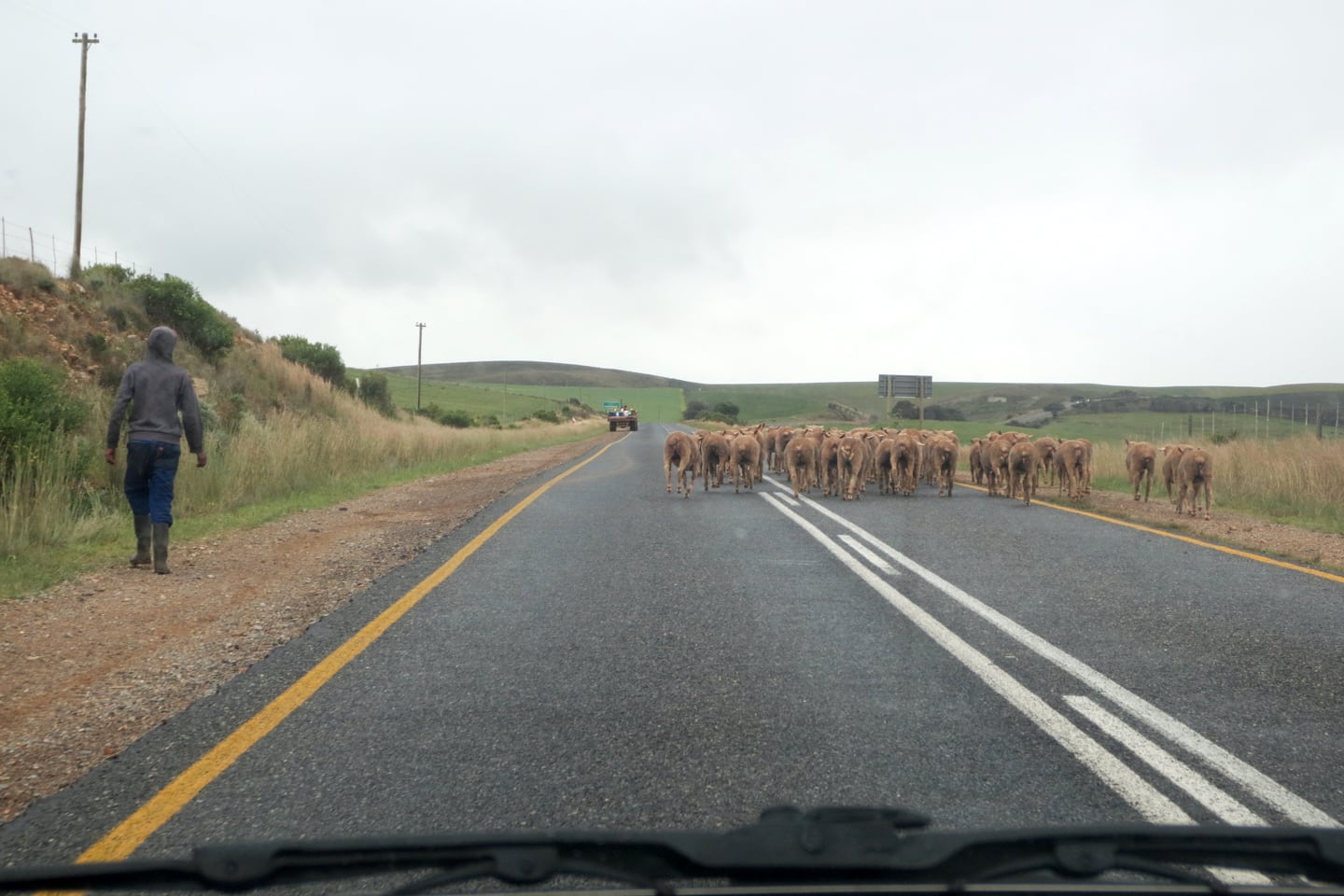 Morning rush hour on the main highway just outside of Bredasdorp, north of L’Agulhas. 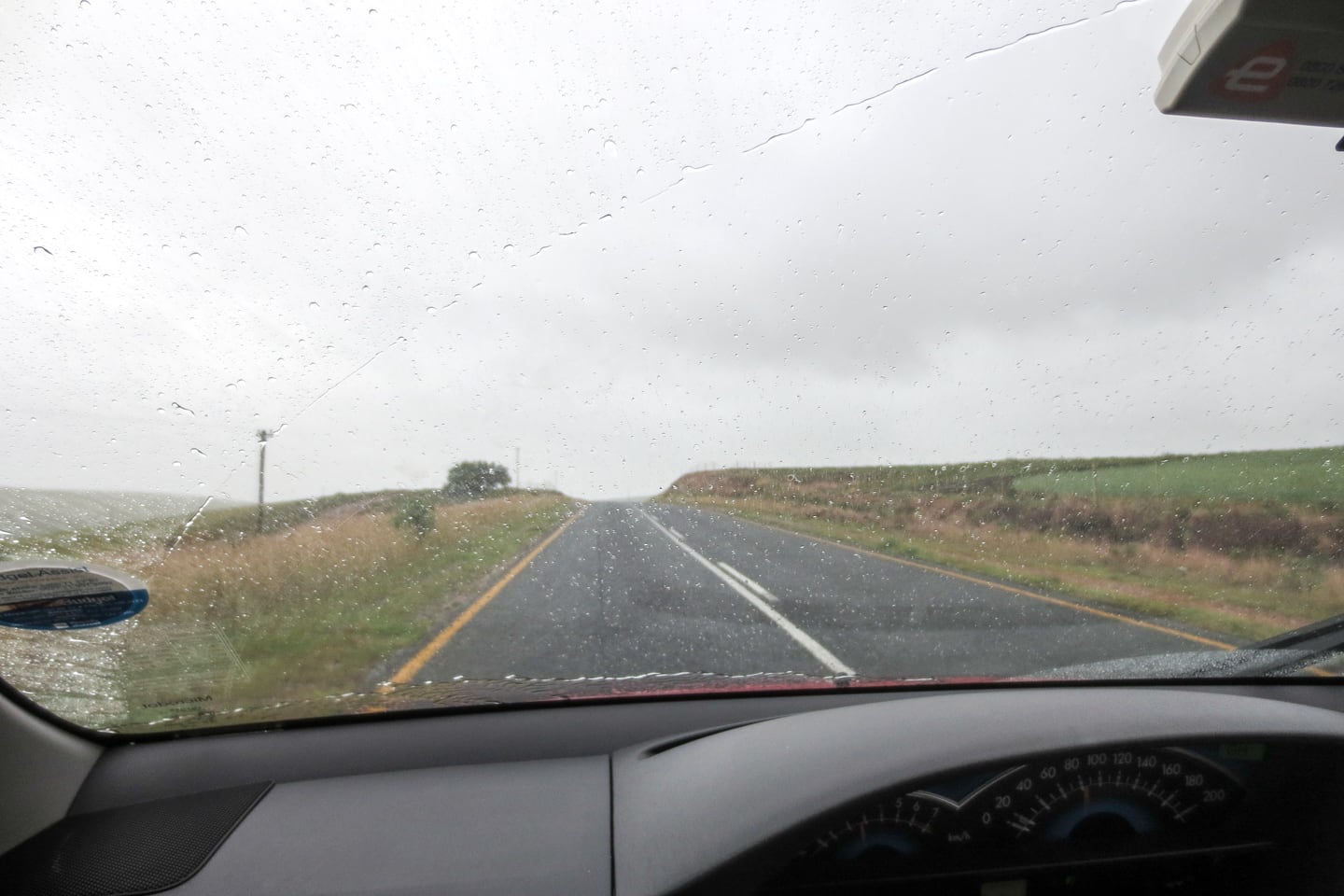 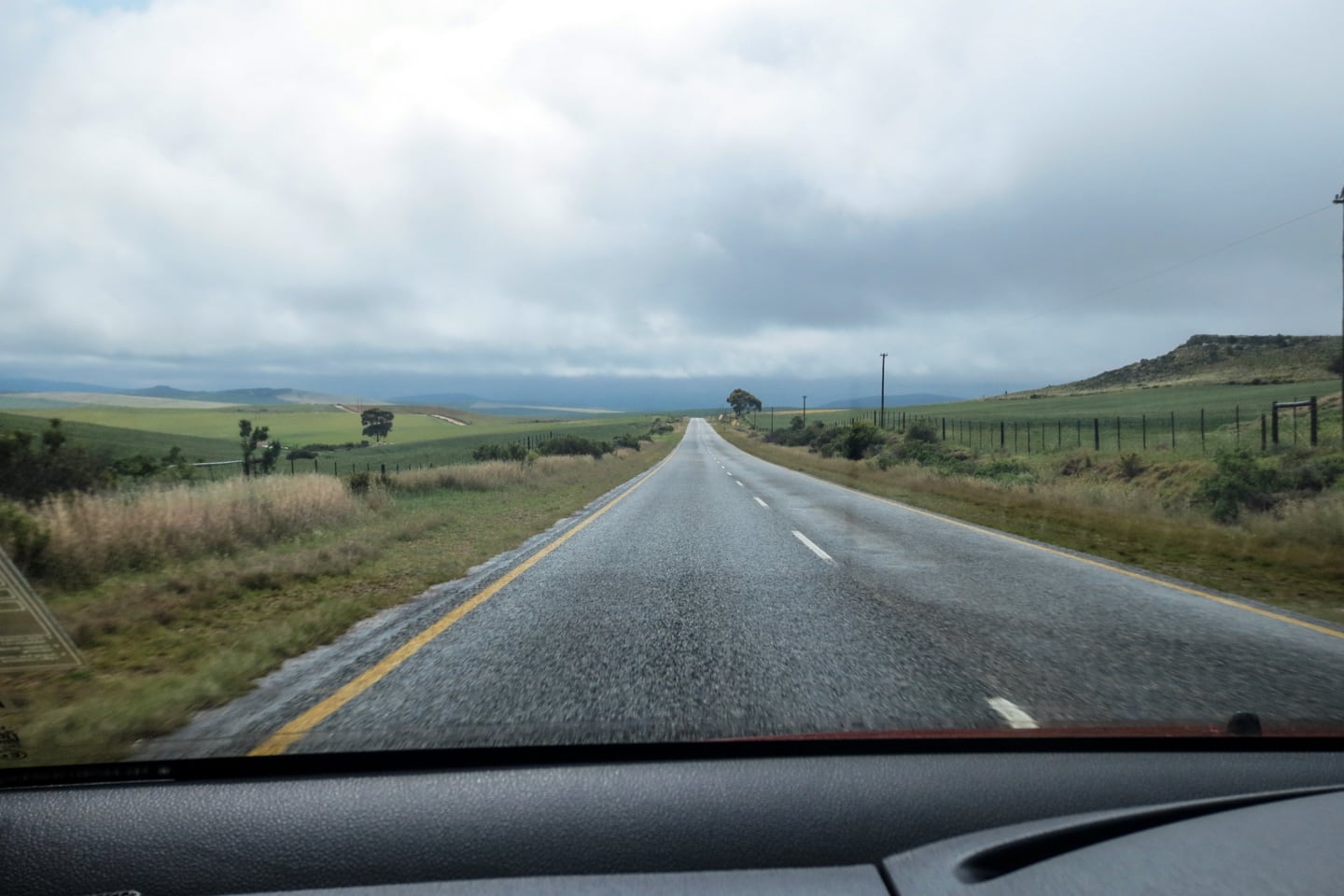 And then we begin to climb into the mountains and ascended above the fog and rain into sunshine! And baboons! Vicious baboons! 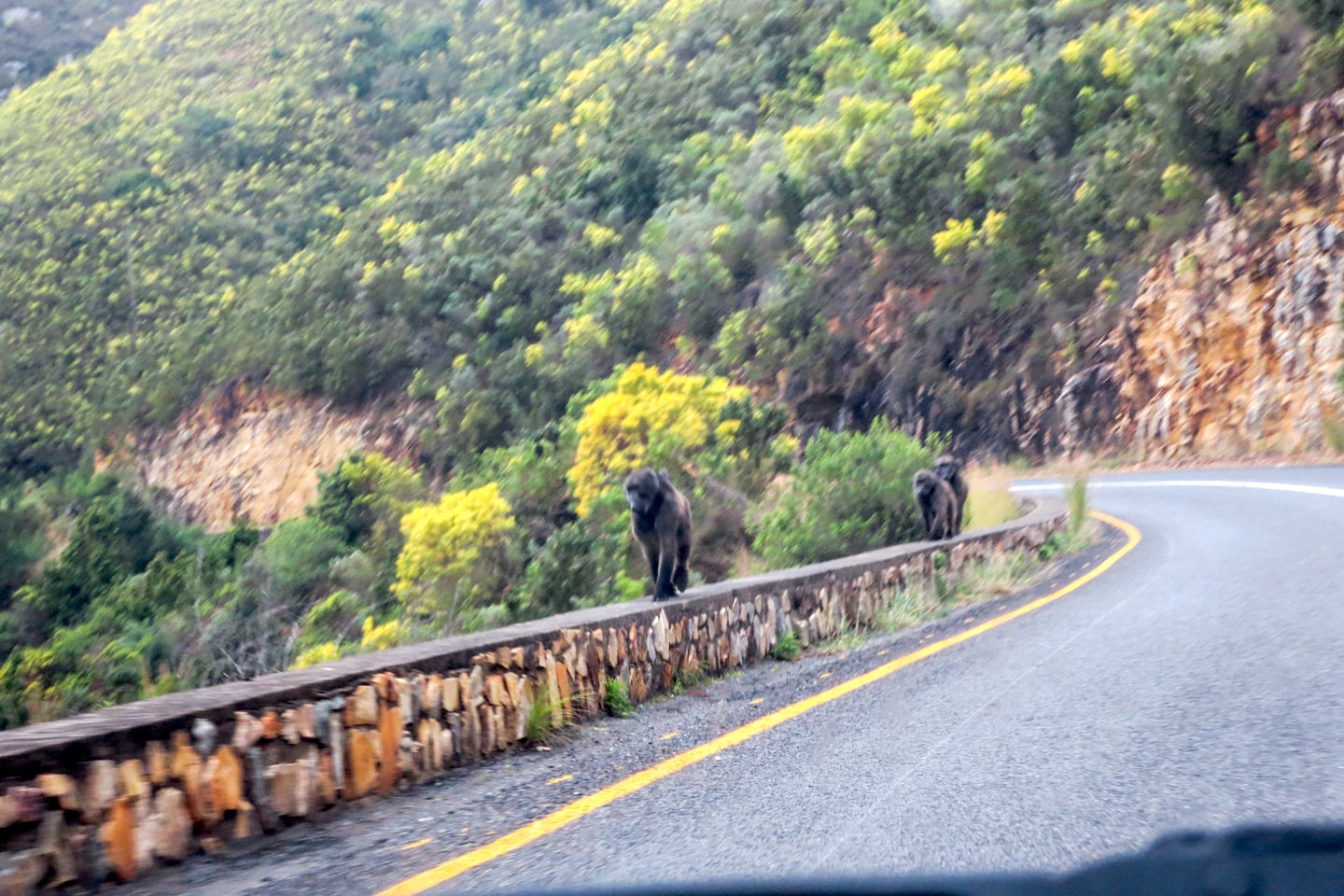 One even threw a rock at the car, a BIG ROCK (but luckily it missed), NO JOKE. Needless to say, we did not stop. But it was unnerving coming around corners and seeing a gang of these guys eyeing the car menacingly. Luckily, they didn’t seem too interested in compact Toyotas. 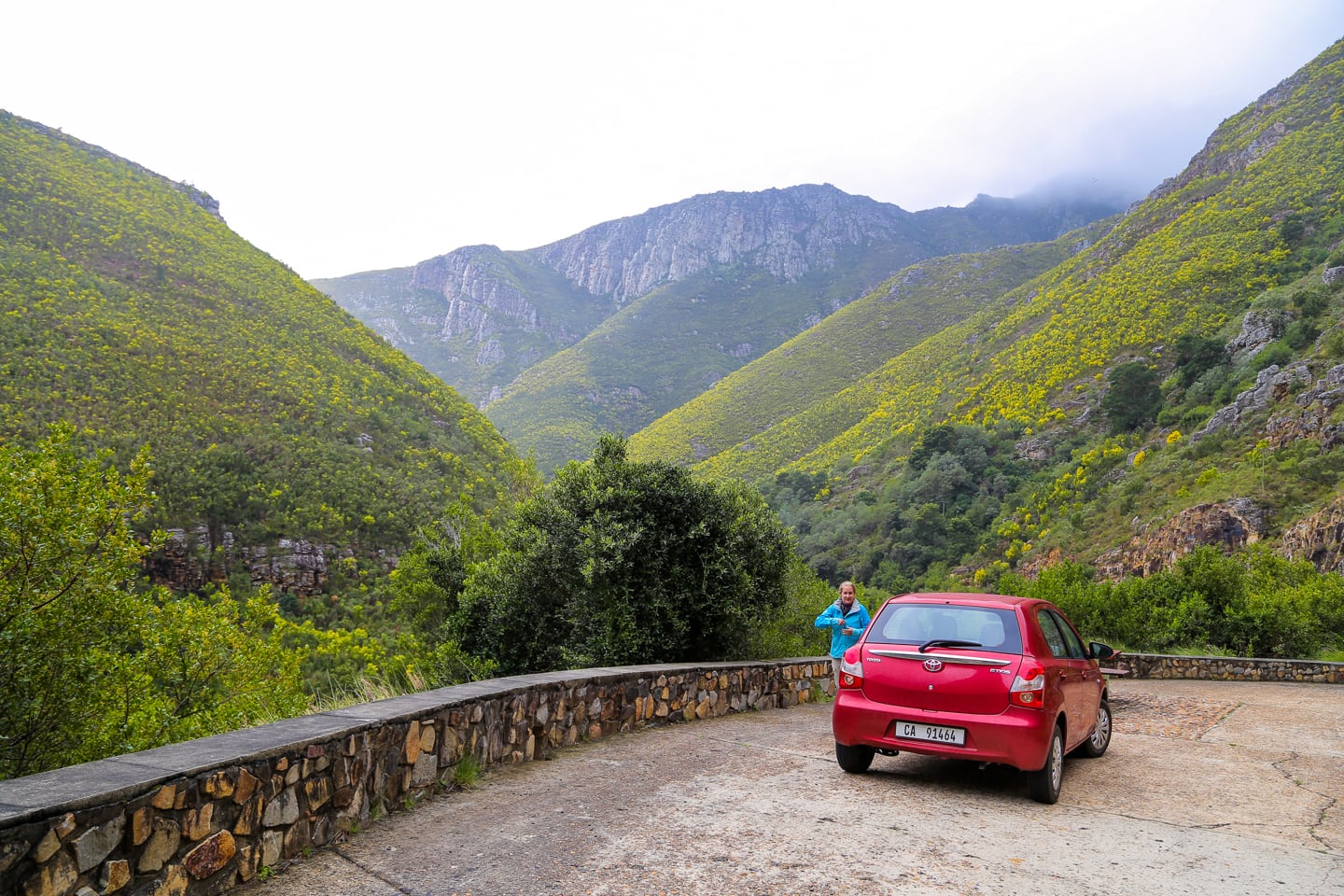 Stopping briefly in a baboon-free zone to take in the view and ‘commune’ with mother nature. 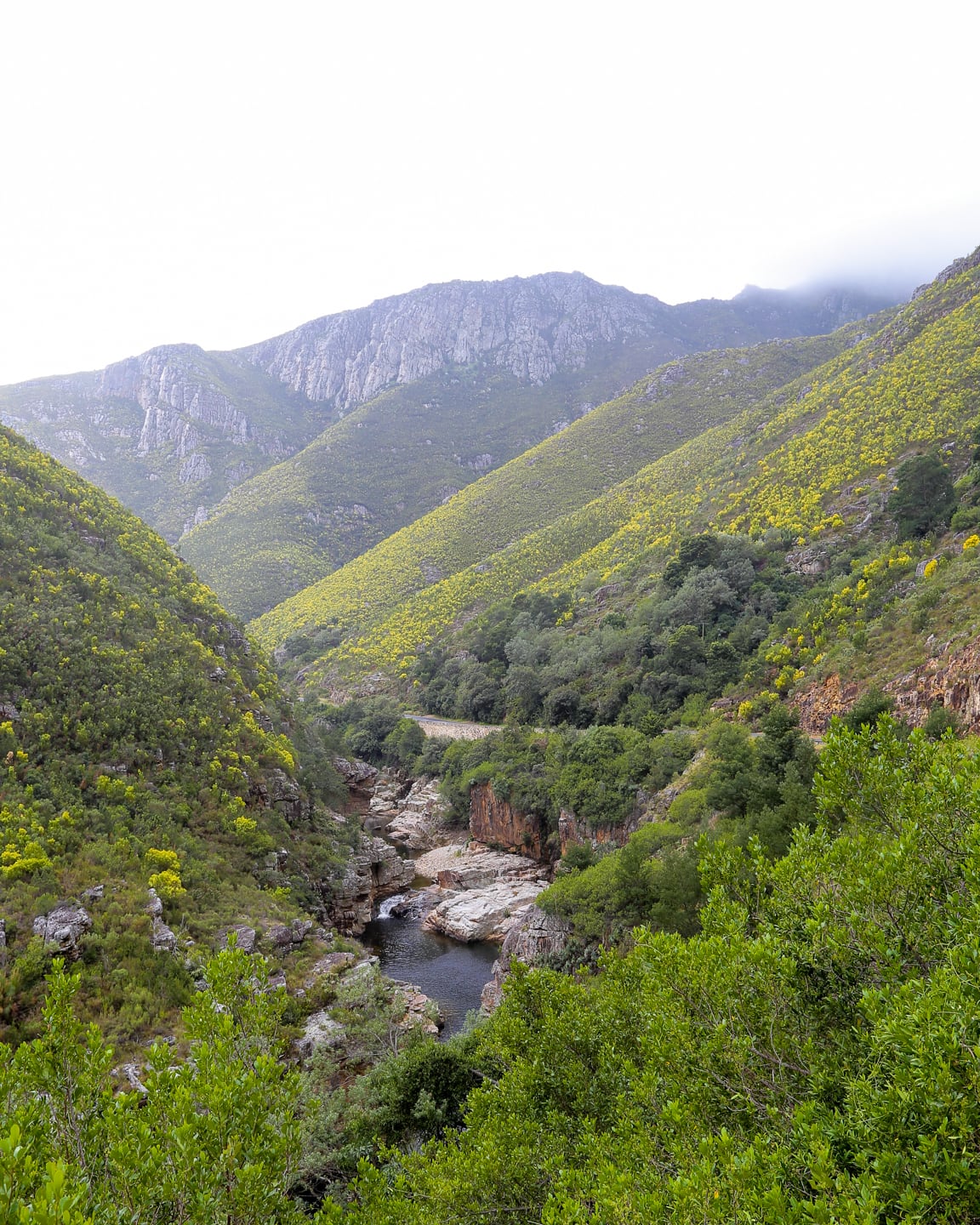 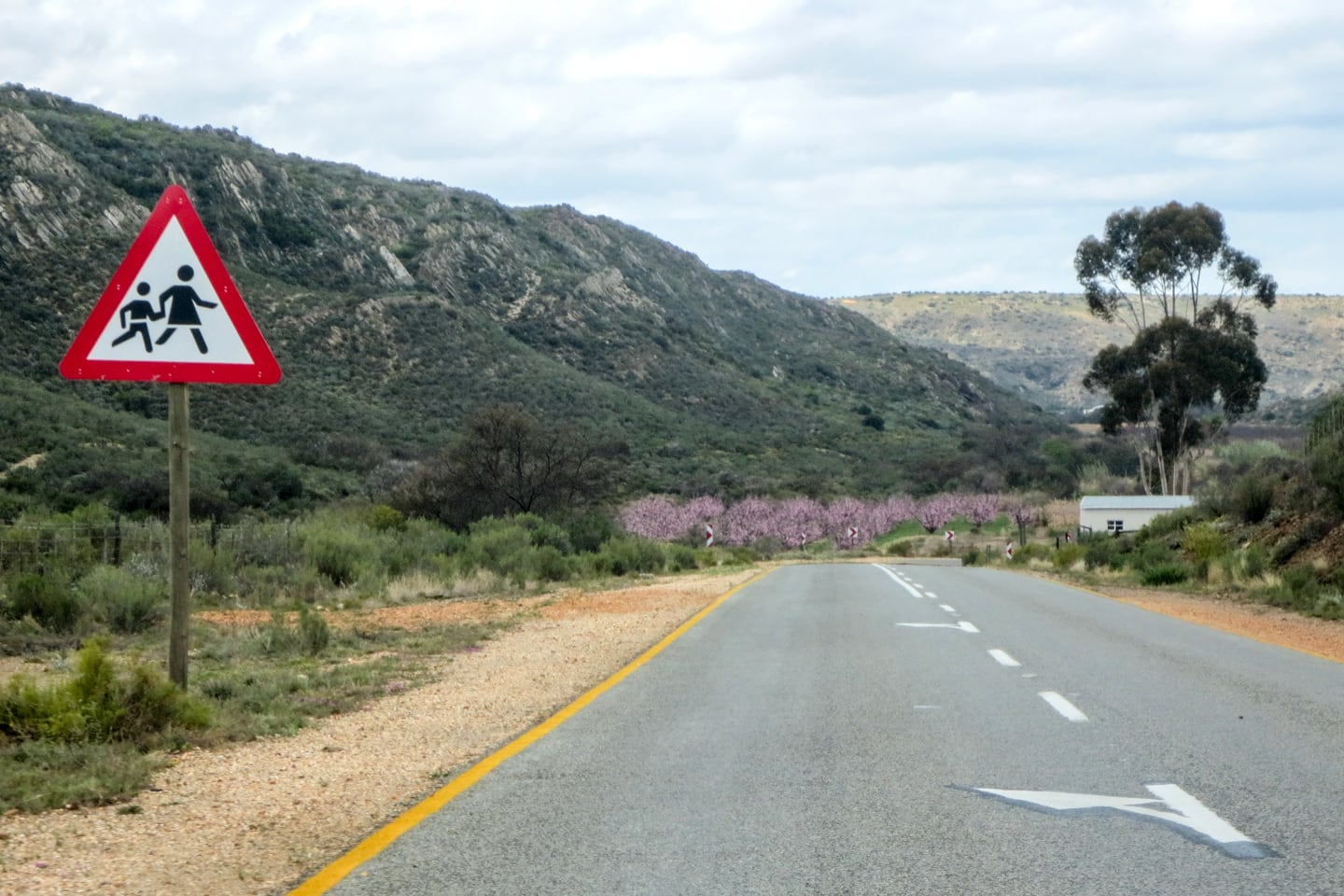 And then, the expanse of the Little Klein Karoo plateau spread out before us, and the sky opened up with sunshine! 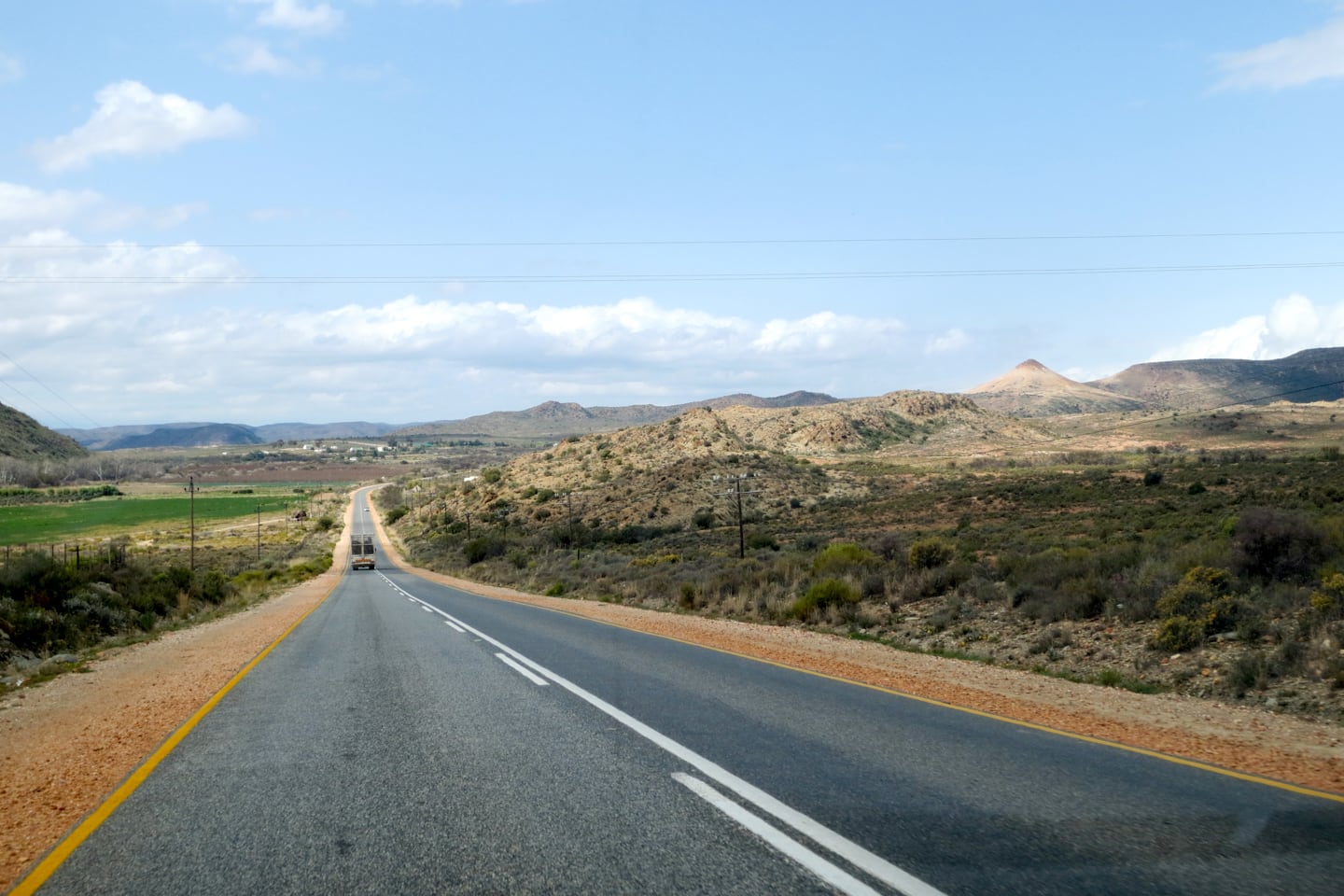 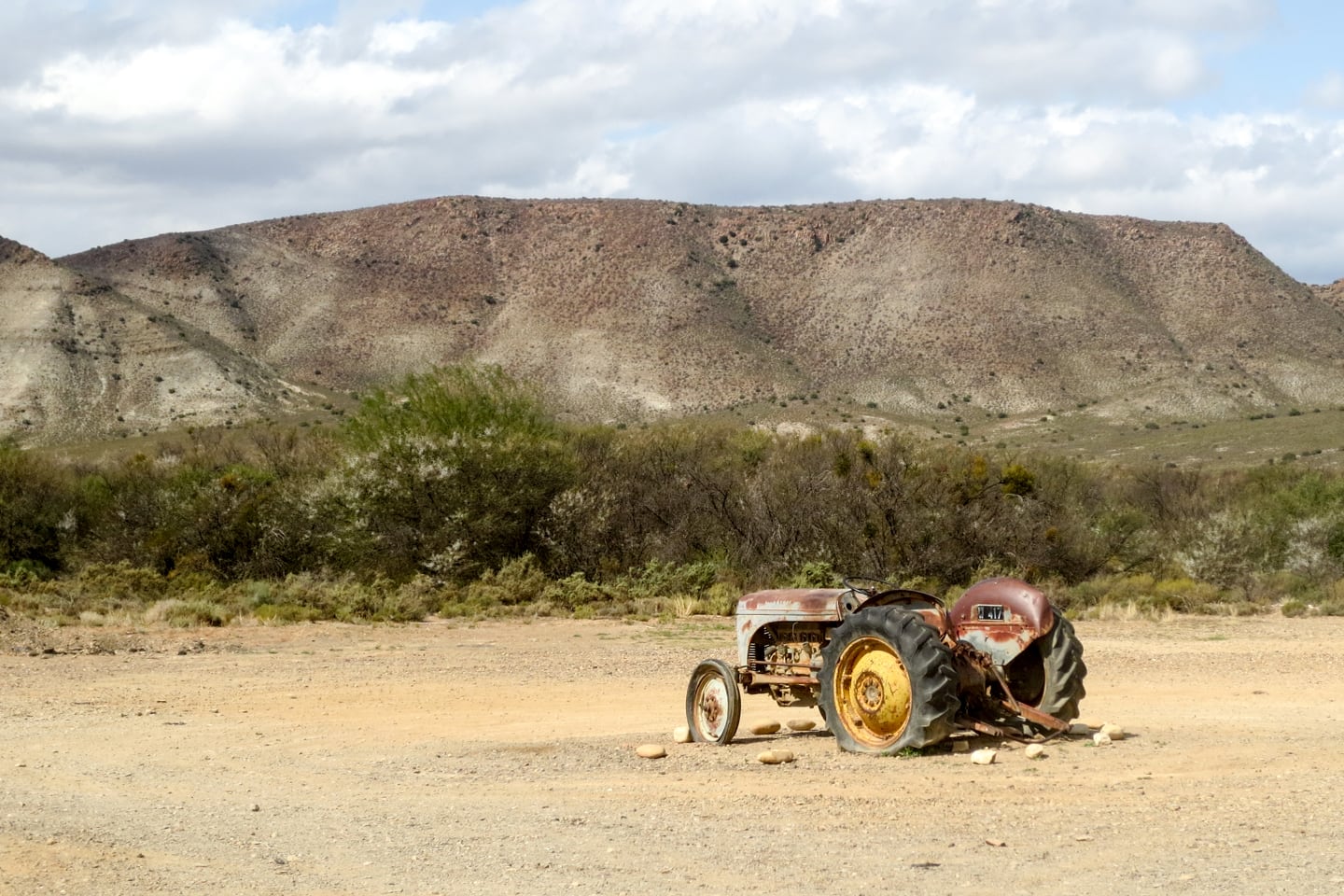 This place was listed in multiple travel literature for the area as a must-see (though to be honest, there really isn’t much else to see around these parts). World Famous Ronnie’s Sex Shop…not an ‘adult shop’ at all, just a very unique place run by a very eccentric gentlemen. He’s got merchandise, a bar, coffee shop and the whole nine yards. Guess that’s one way to lure customers in off the highway…but then it kind of makes you wonder who his target audience was (and if they’d actually be disappointed when they discovered the truth)…well, we stopped, I guess. 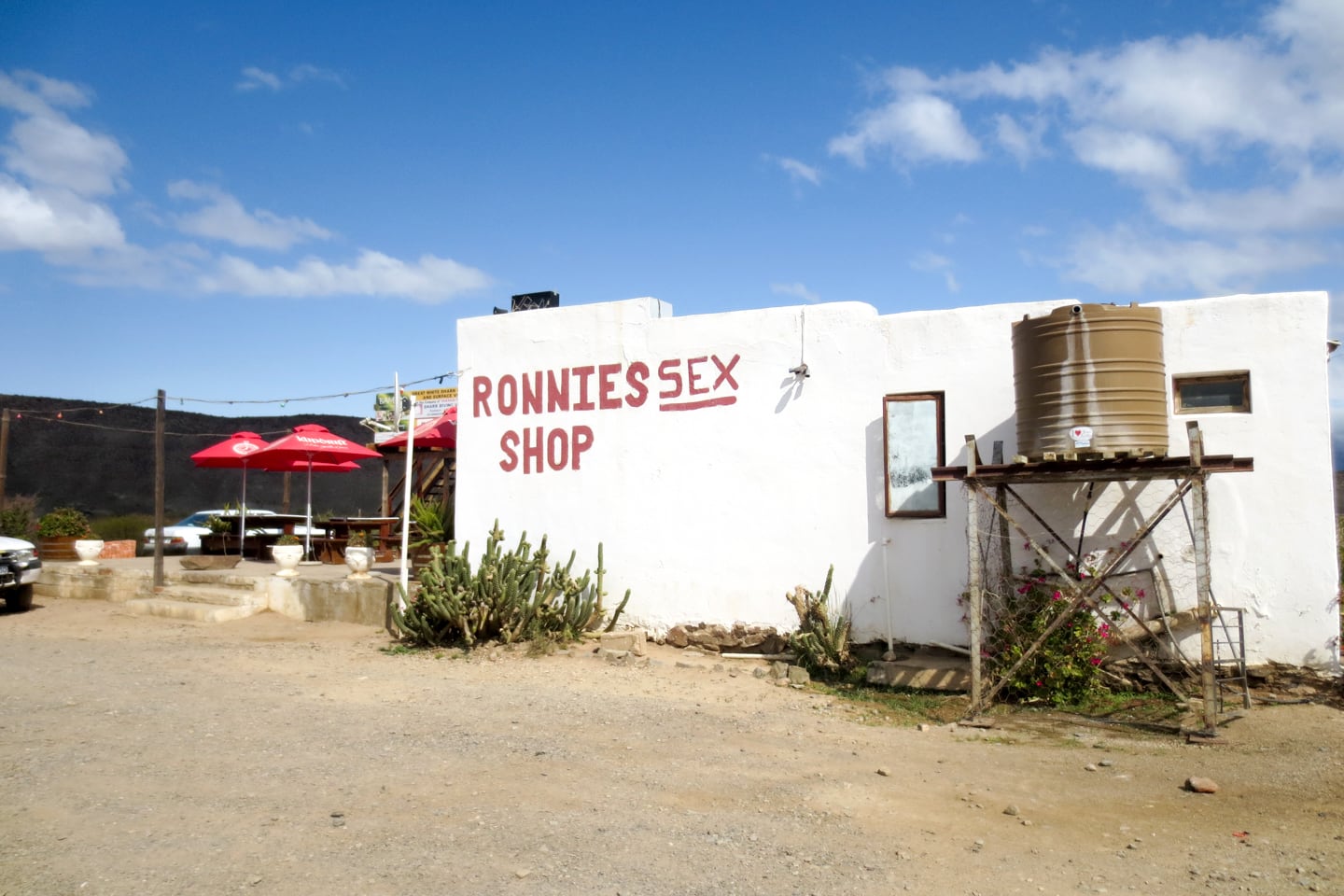 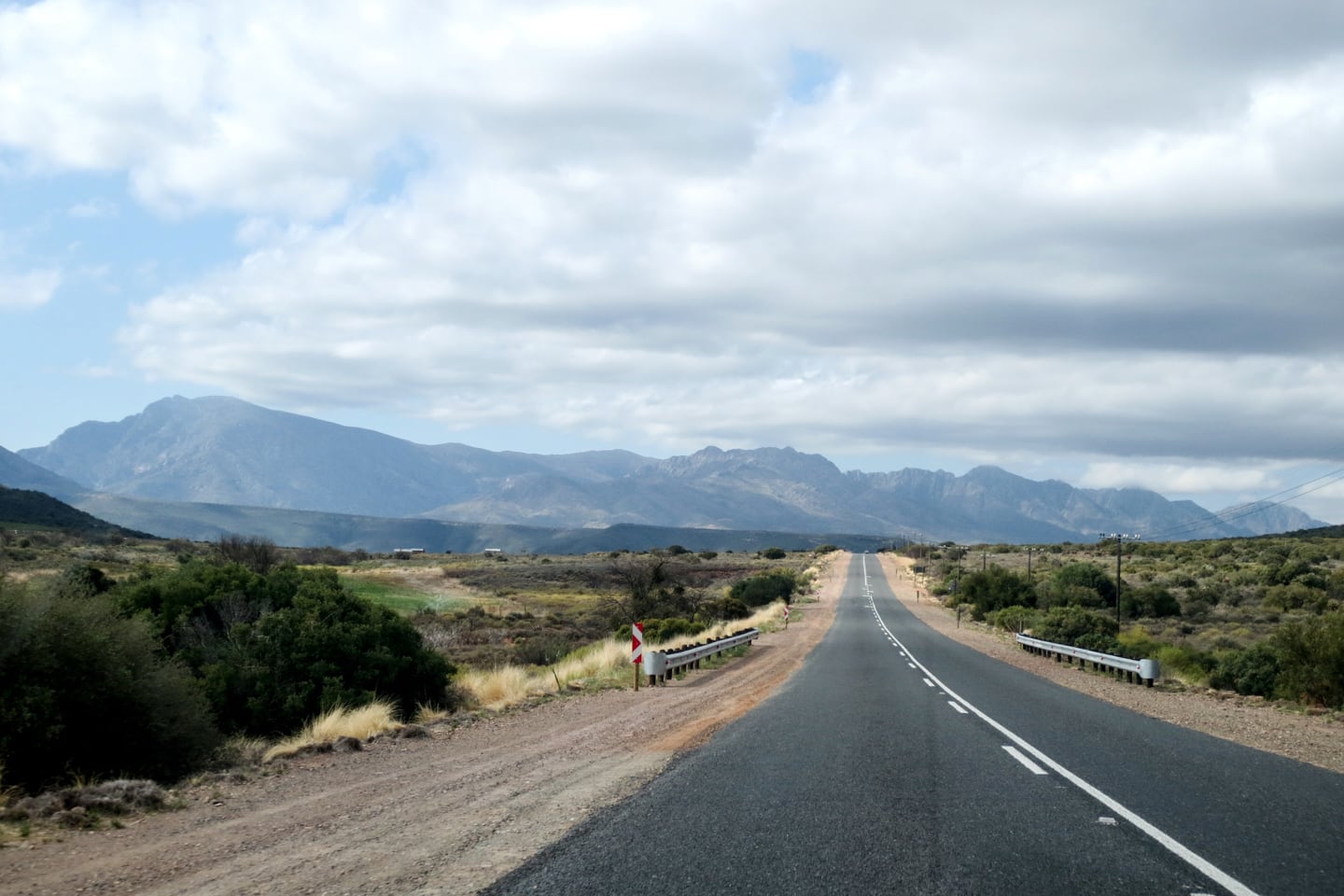 Back on the road with some more mountains to cross. This part of the country is absolutely stunning — a postcard at every turn. 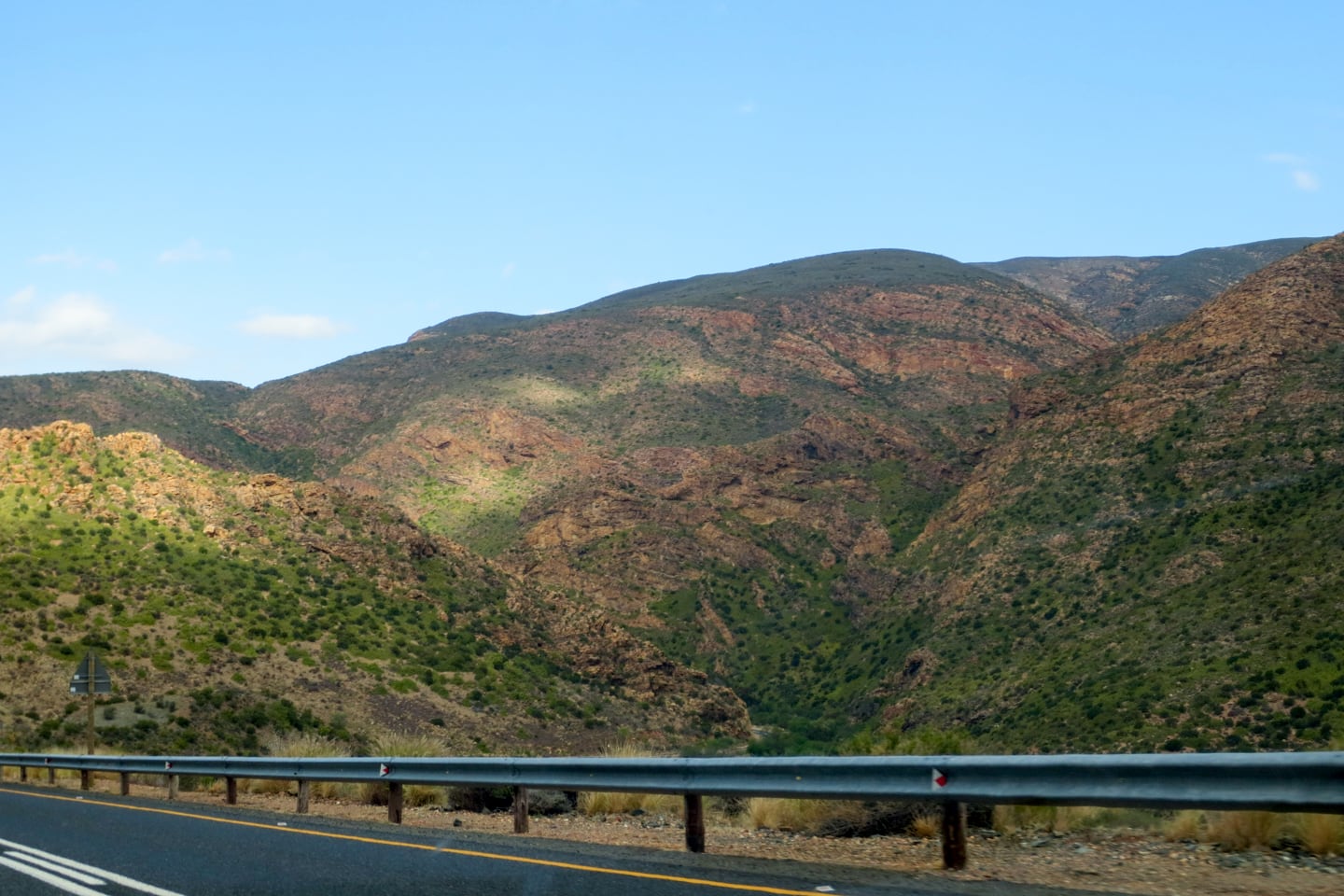 I remembered these signs from a previous trip driving around in South Africa, but I still get a kick out of them. 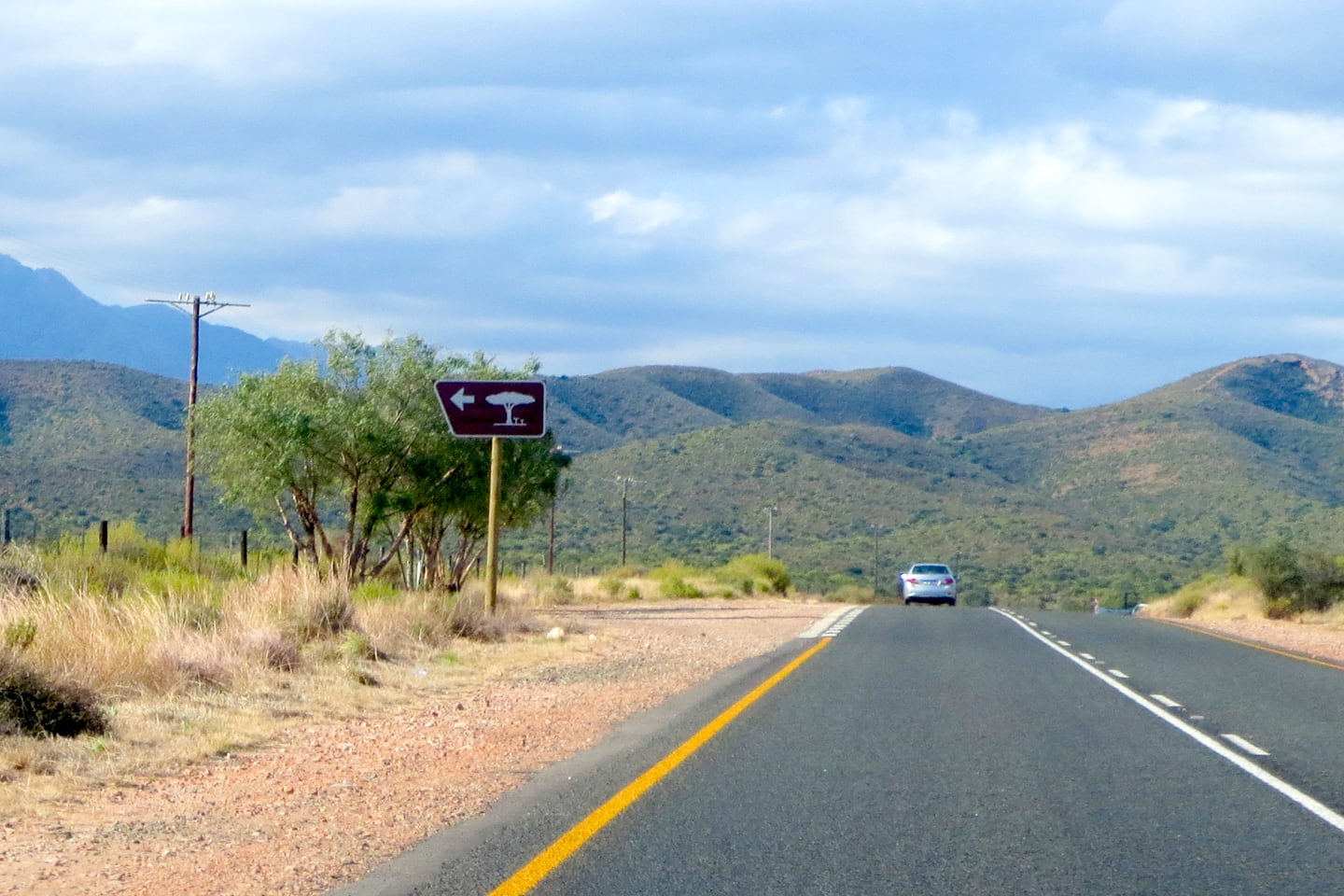 They actually mark little rest areas (usually consisting of a picnic table under a tree) for motorists, but in the more sparse scrubland of South Africa, they seem to be almost sadly overemphasizing that there is indeed a tree here if you’re interested. 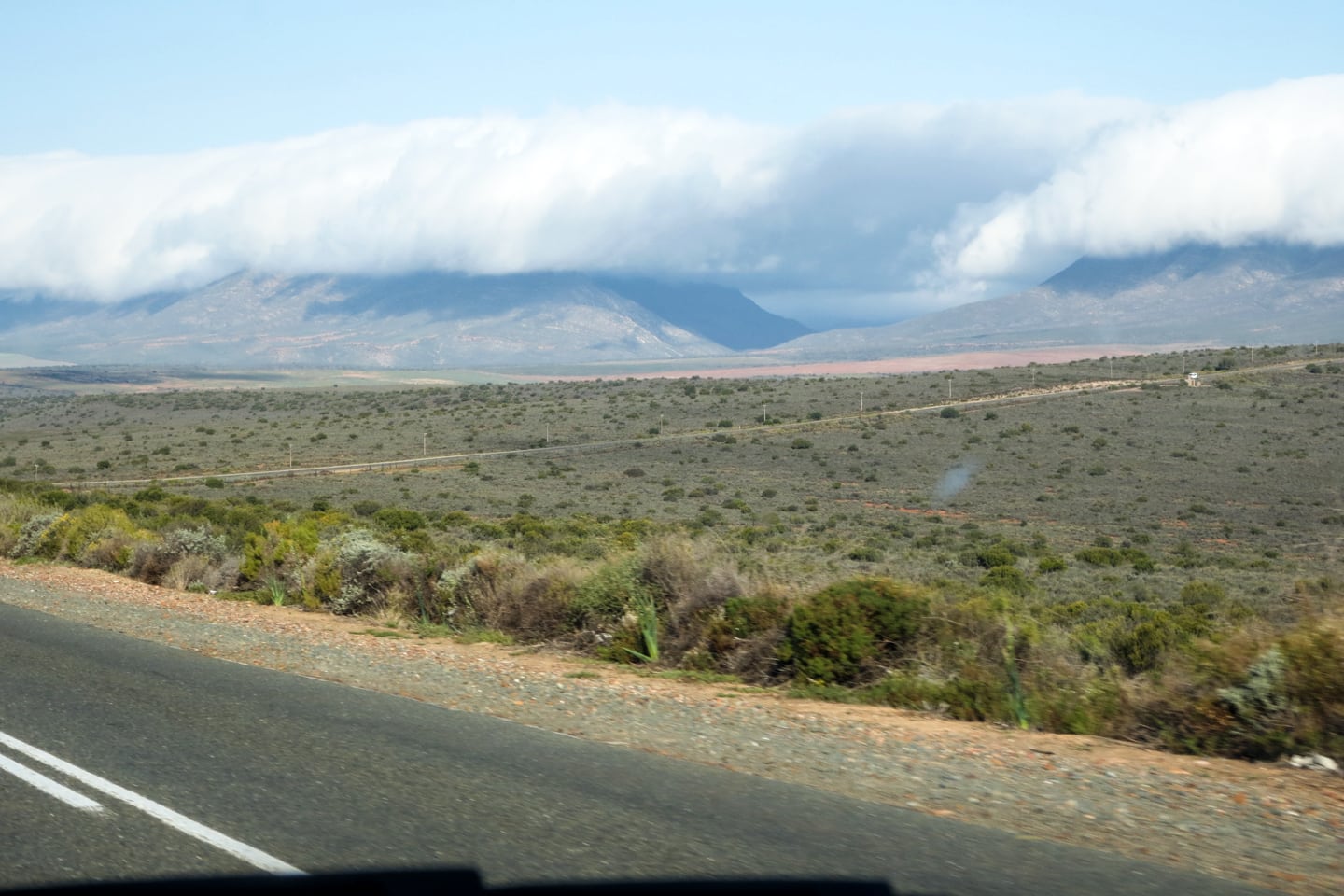 As all good things must come to an end, so would our sunshine, as we noticed the highway curve to the right and into a dark, cloud covered valley where only trolls and ostriches venture. 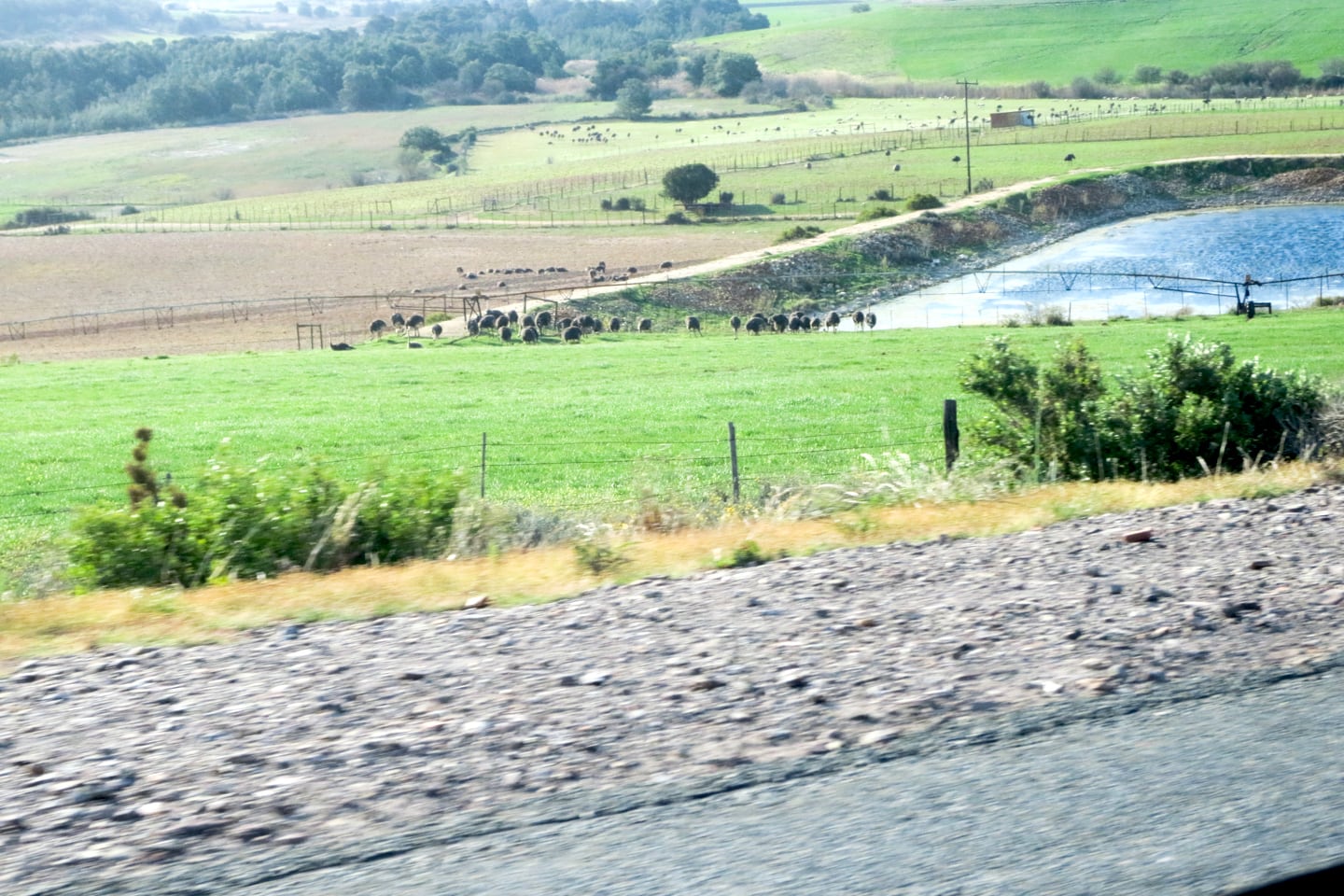 This is, after all, the world’s largest ostrich raising region (as seen from the highway, above), so we felt obligated to get to know these feathered friends a bit more intimately… 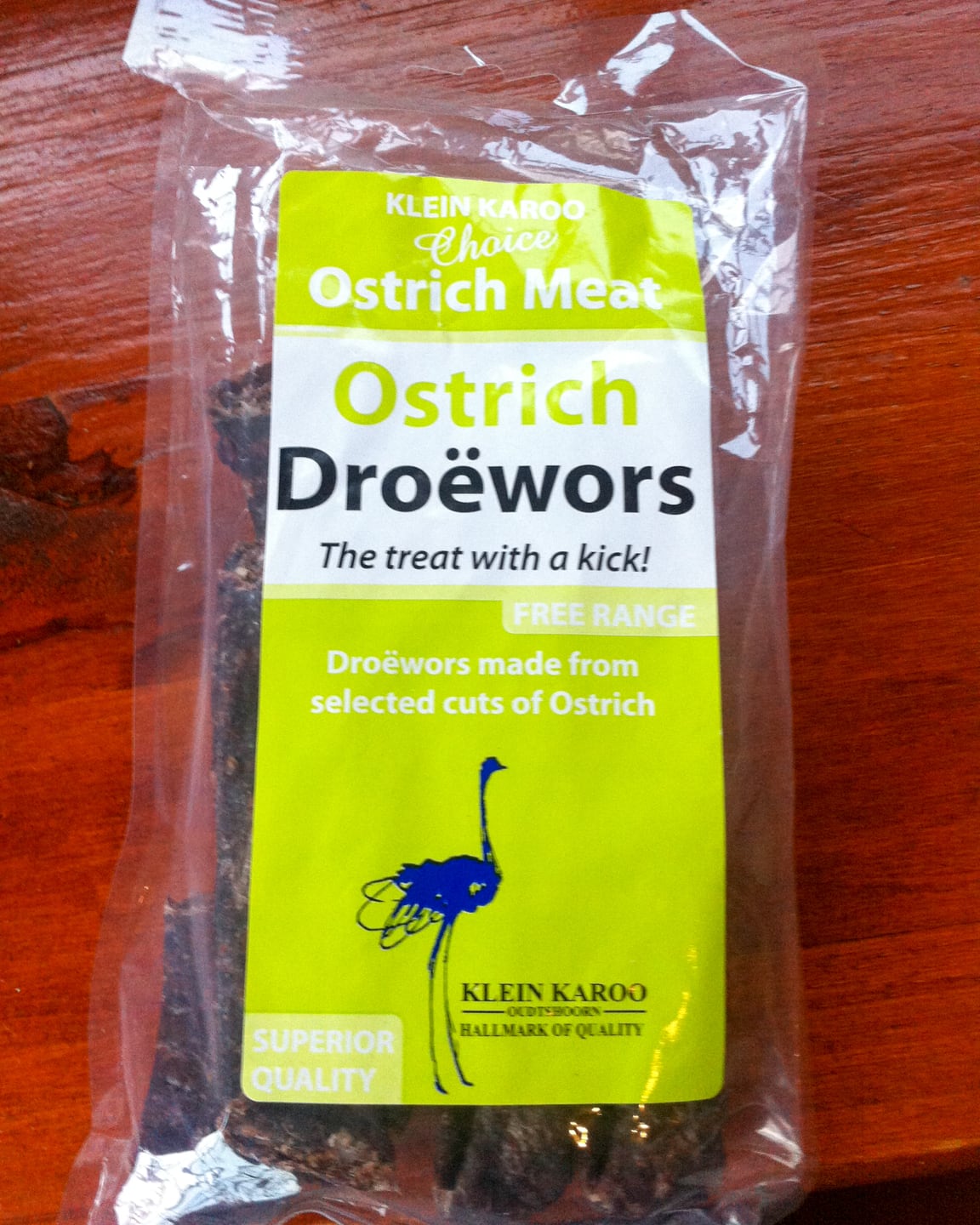 Well, not every story can have a happy ending! 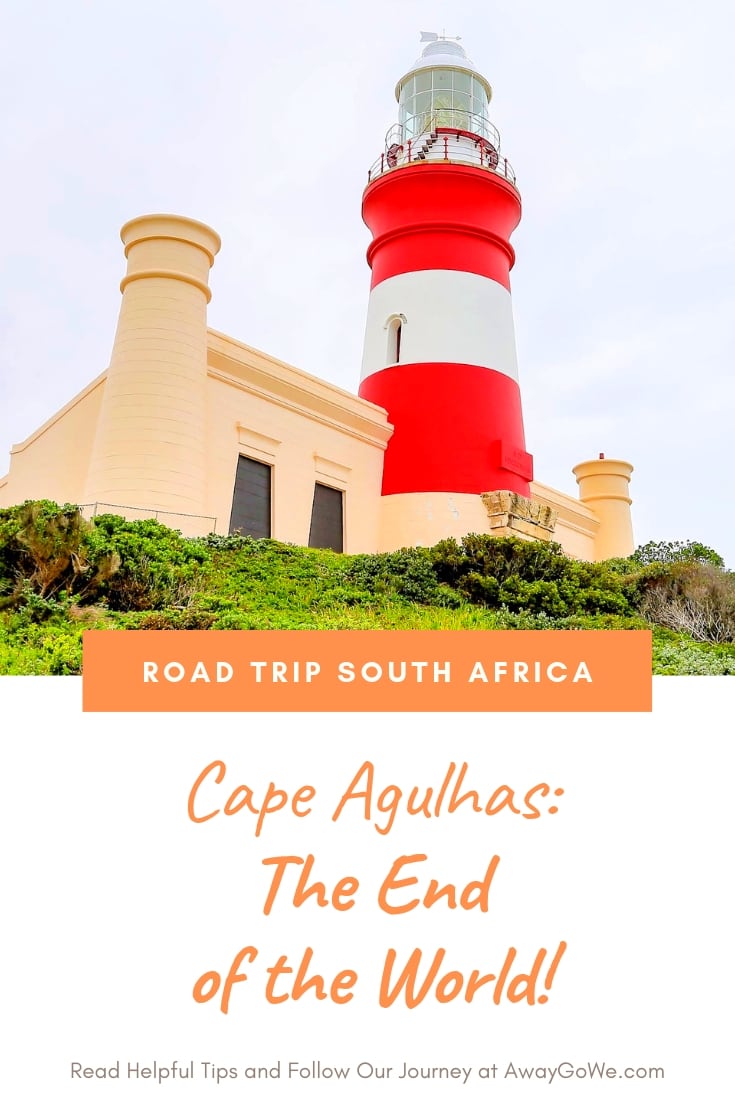 Sorry this was not on my agenda now, during my lifetime ! How beautiful ! Thank you for
letting me hitchhike along !!

What a beautiful and varied countryside!