The President and the Panecillo in Quito

Today, we’re continuing our tour of Old Town, with a trip up to Quito’s famous (and infamous) Panecillo, but not before running into the President of Ecuador, himself.

Man, do I love cities like Quito — sprawling messes and masses of millions with a cultural ecosystem all their own — brimming with a palpable tension between old and new — between deep traditional roots and the energy of youth seizing the present.

Some of my favorites: Athens, Bangkok, Istanbul, Ho Chi Minh, Hong Kong — world’s unto themselves offering endless opportunities for exploration, learning, and losing oneself completely — and while the Quito metro area is considerably smaller at just under five million, it deserves to be included in that list.

These are cities offering gargantuan challenges, but even bigger rewards for those seeking life being lived — the good, the bad and everything in between — in brilliant Technicolor every single day.

It’s impossible for me, even after the fact, to look at the photo (above) and not be both humbled and inspired. 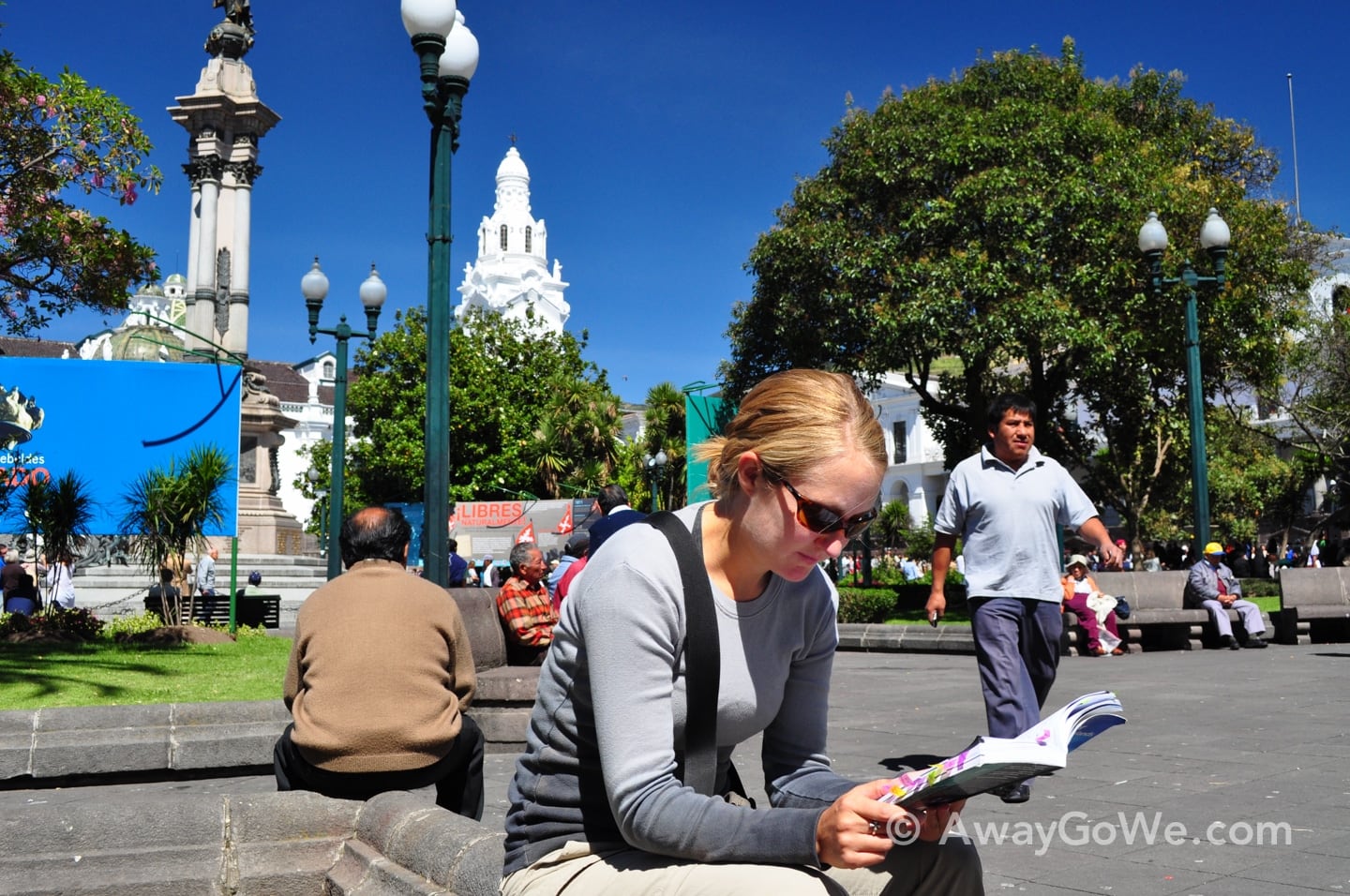 Quito, in the Spanish/ Latin American cultural tradition, lives life outdoors — in meticulously manicured plazas and buzzing street-side restaurantes and cafes. If we ever had to choose between a 5,000 square foot McMansion in the suburbs of a major northern-U.S. city, or an 800 square foot home a few blocks off a major plaza in a major city in the Latin American tropics, Lori and I would jump at the latter in a heartbeat — no contest. Those of you who have been following AwayGoWe for some time already knew that, I’m sure. 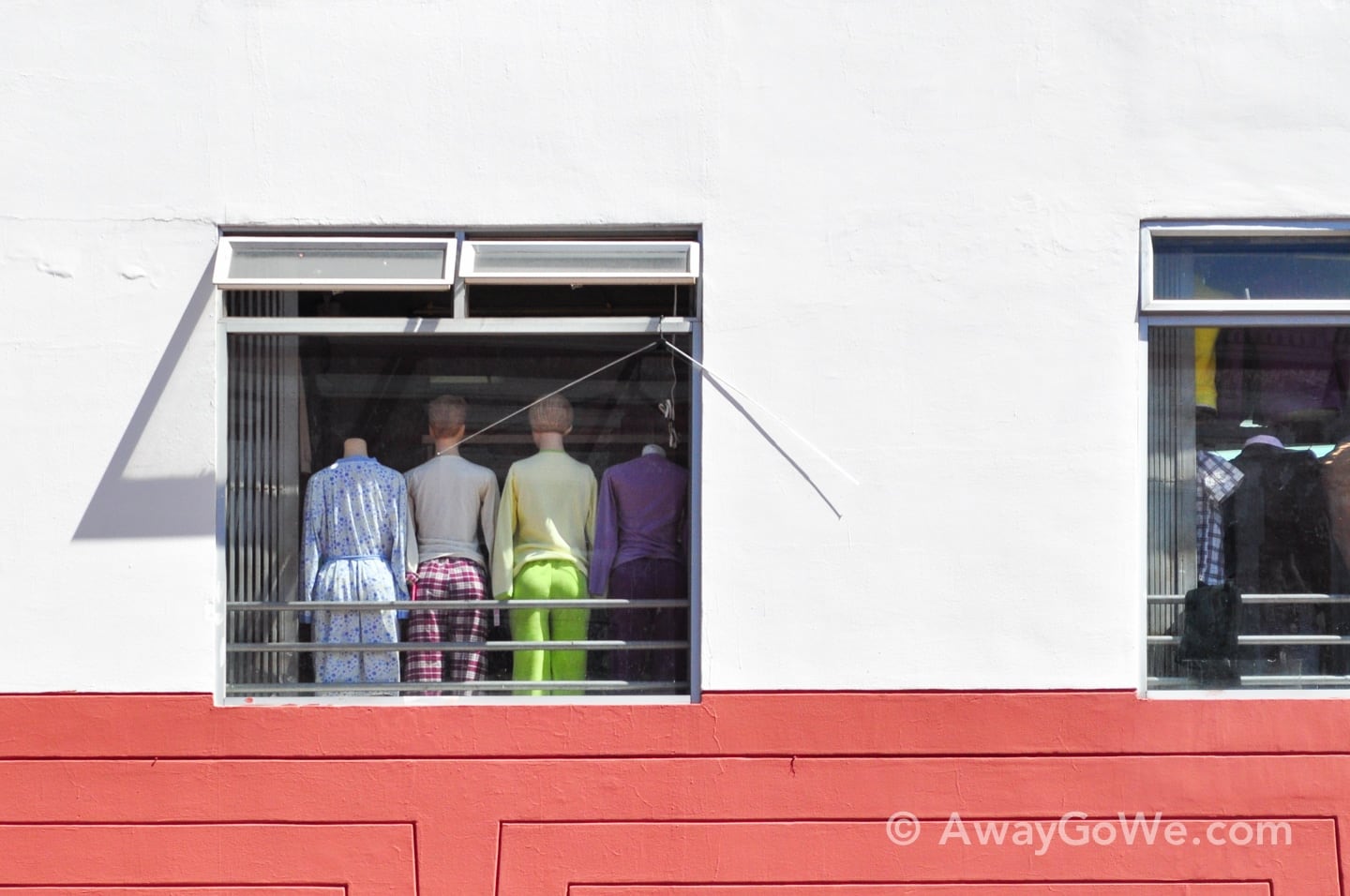 Quito is the highest official capital city in the world at 9,250 feet (2,850 m) above sea level. Given the city’s unique geography, splayed out along a valley surrounded by towering peaks, it’s hard to tell you’re so high up.

Measuring about 25 miles long by a few miles wide, it’s no wonder that Quito is also a royal pain in the butt to get from one end to the other, lengthwise, though things are improving with public transportation initiatives, if slowly (though the Metro bus does play a medley of “La Cucaracha” and “Rudolph the Red Nose Reindeer” to warn people that its approaching, so its got that going for it). 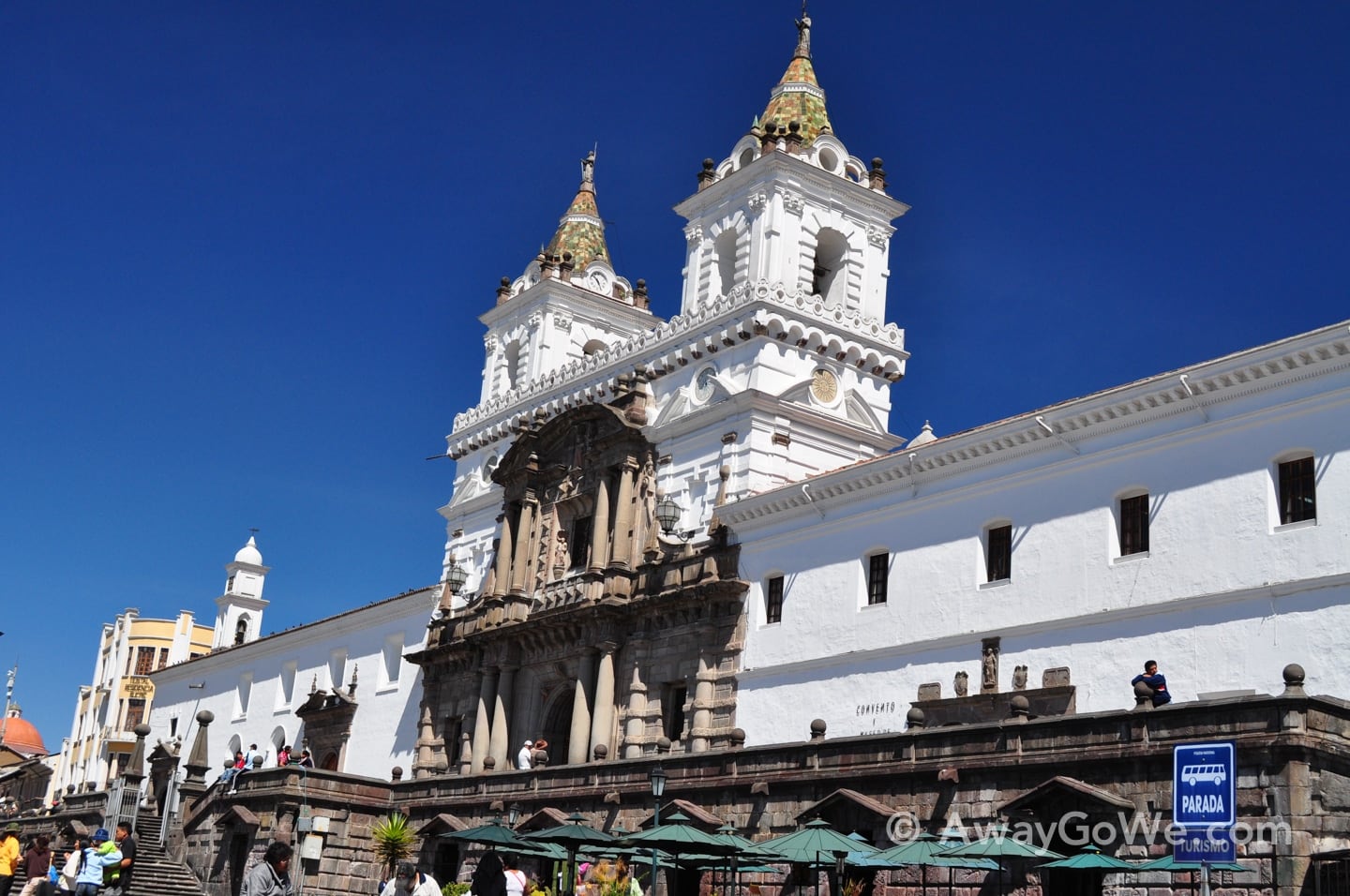 Today, we’re continuing our tour of Old Town, with a trip up to Quito’s famous (and infamous) Panecillo, but not before grabbing a cafe con leche at an outdoor cafe on the plaza.

We’re here in mid-August and it is an absolutely gorgeous day. You’d never know we’re just a few miles from the Equator — the high elevation definitely works in our favor. A hundred miles to the east (and 8,500 feet lower!) in the Amazon jungle, it’s a whole other story.

Speaking of the Panecillo (and the famous statue of the Virgin Mary atop), there it is in the distance. We’ll be visiting you soon enough, little-piece-of-bread (Sp: panecillo). 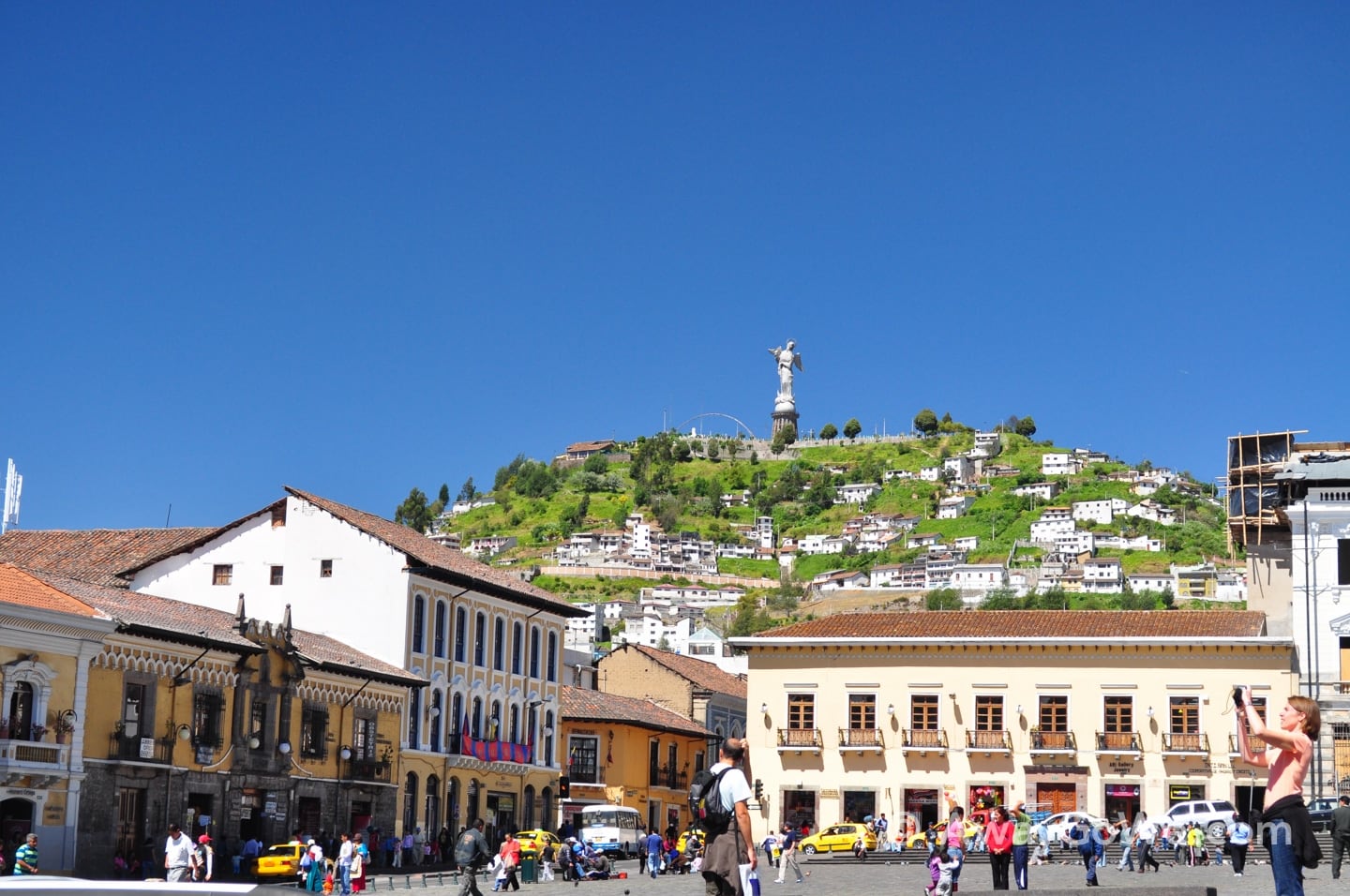 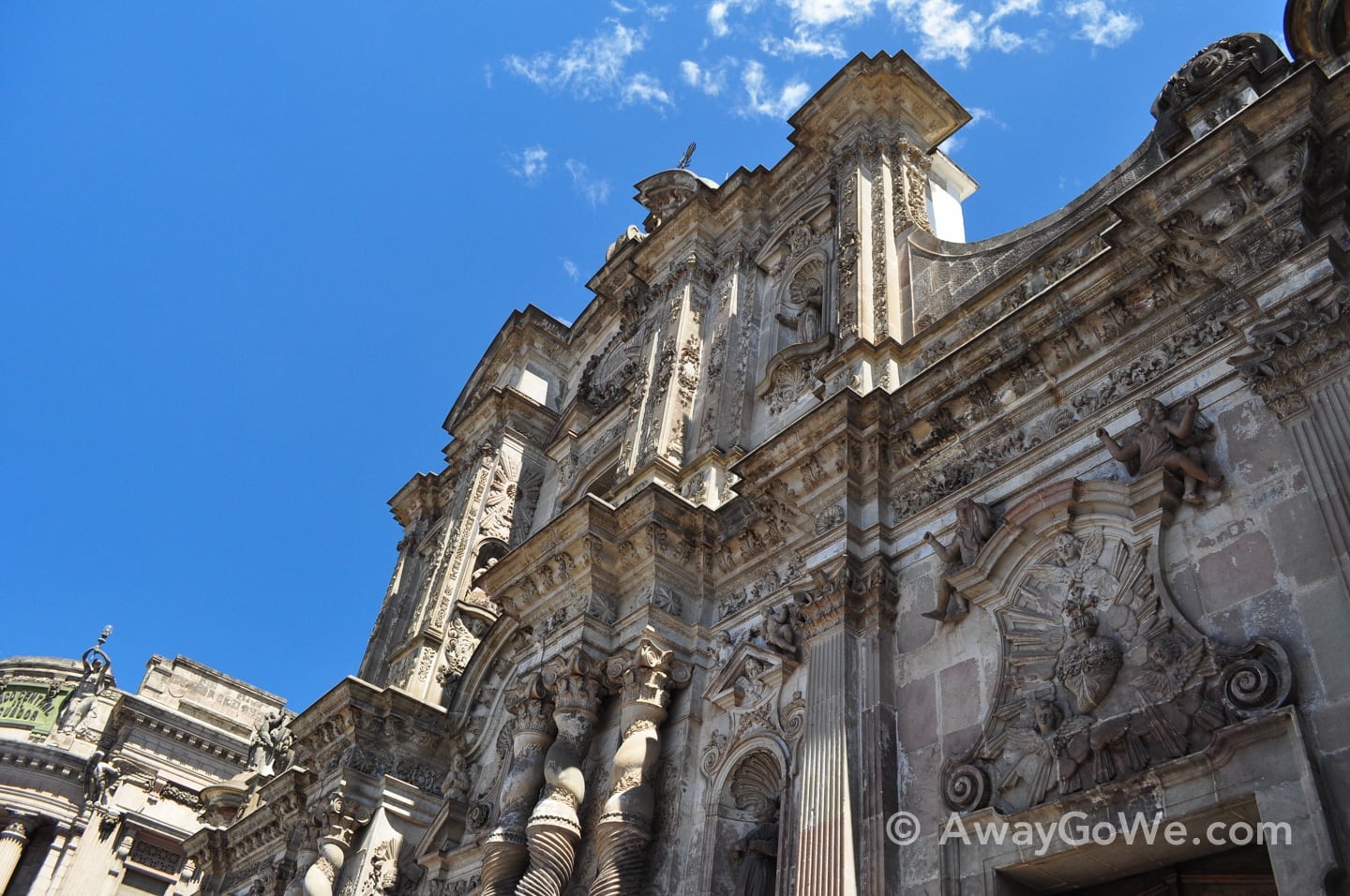 Another thing I love about traveling outside of North America, is that random and memorable things just seem to happen on a whim. Seriously, I don’t care who you are or what day it is, you could never, ever, ever be walking around Washington, DC or New York and stumble upon this: 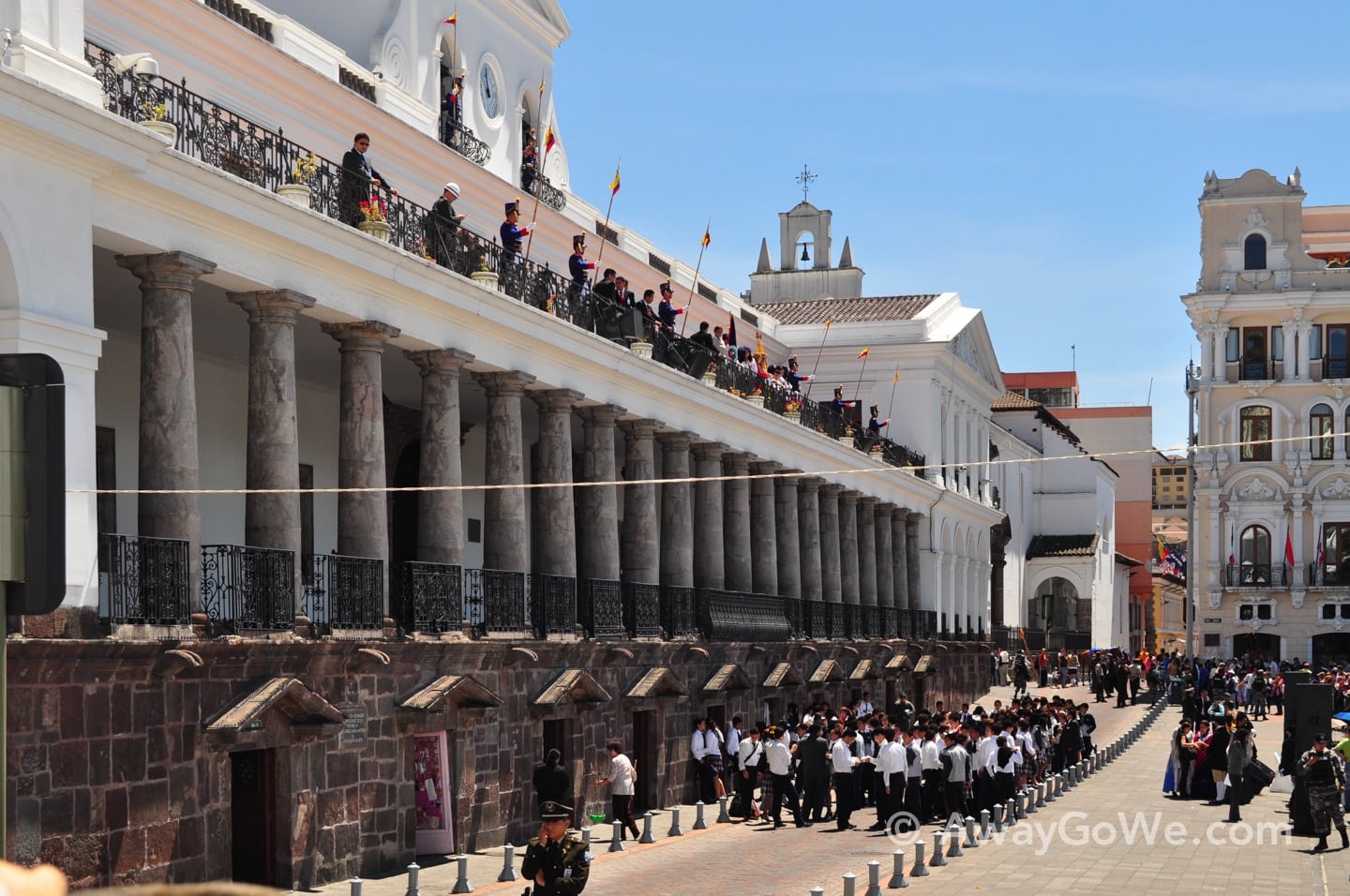 And what is this, you ask? Why, it’s the President of Ecuador addressing the people, of course. In an open plaza, no admission or security pat-down required. Photos encouraged. Somehow, we just melted into the crowd and got this rockstar spot to watch the festivities.

Regardless of your feelings on President Correa, his presidency has been notable for several reasons.

He’s a democratic socialist whose been serving since 2007. He was also the first president of Ecuador to be re-elected to a second term since the 19th century. He’s got a PhD in Economics from the University of Illinois. Oh, and a month after these photos were taken, he was taken hostage by the National Police force because he championed a bill to curb their excessive bonuses (he was later freed by a special forces army unit).

Indeed, there are lots of reasons for the U.S. government not to like Correa, but he’s been very good to the people of Ecuador, and more countries like Ecuador would likely fair much better with more leaders like Correa at the helm. 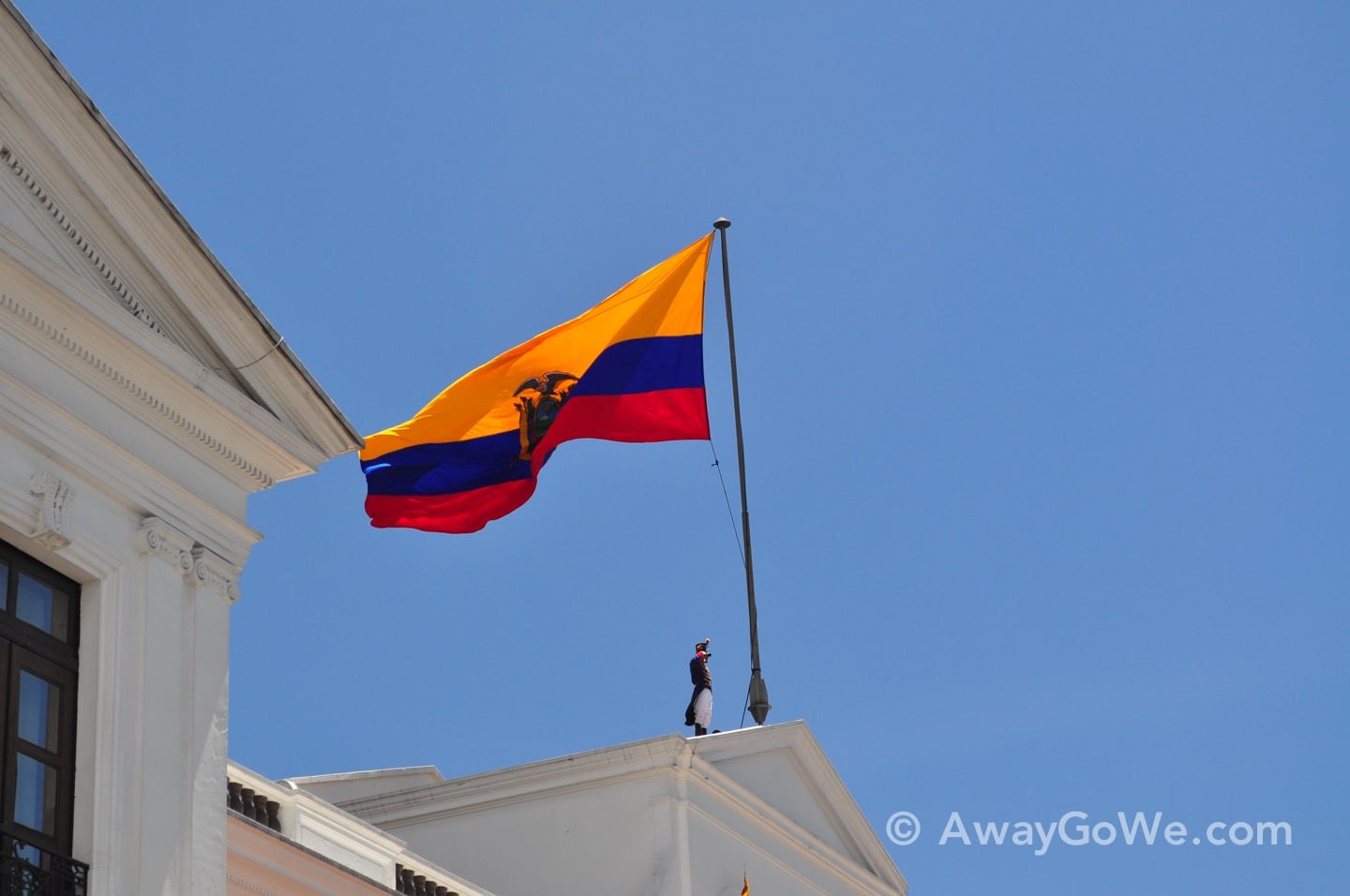 The only thing that was perhaps more remarkable than happening upon the president of Ecuador speaking in the government plaza was the fact that this guy stood and saluted for the duration of the ceremonies. And the size of the flag — get a load of that thing! It’s nearly the size of the entire country! 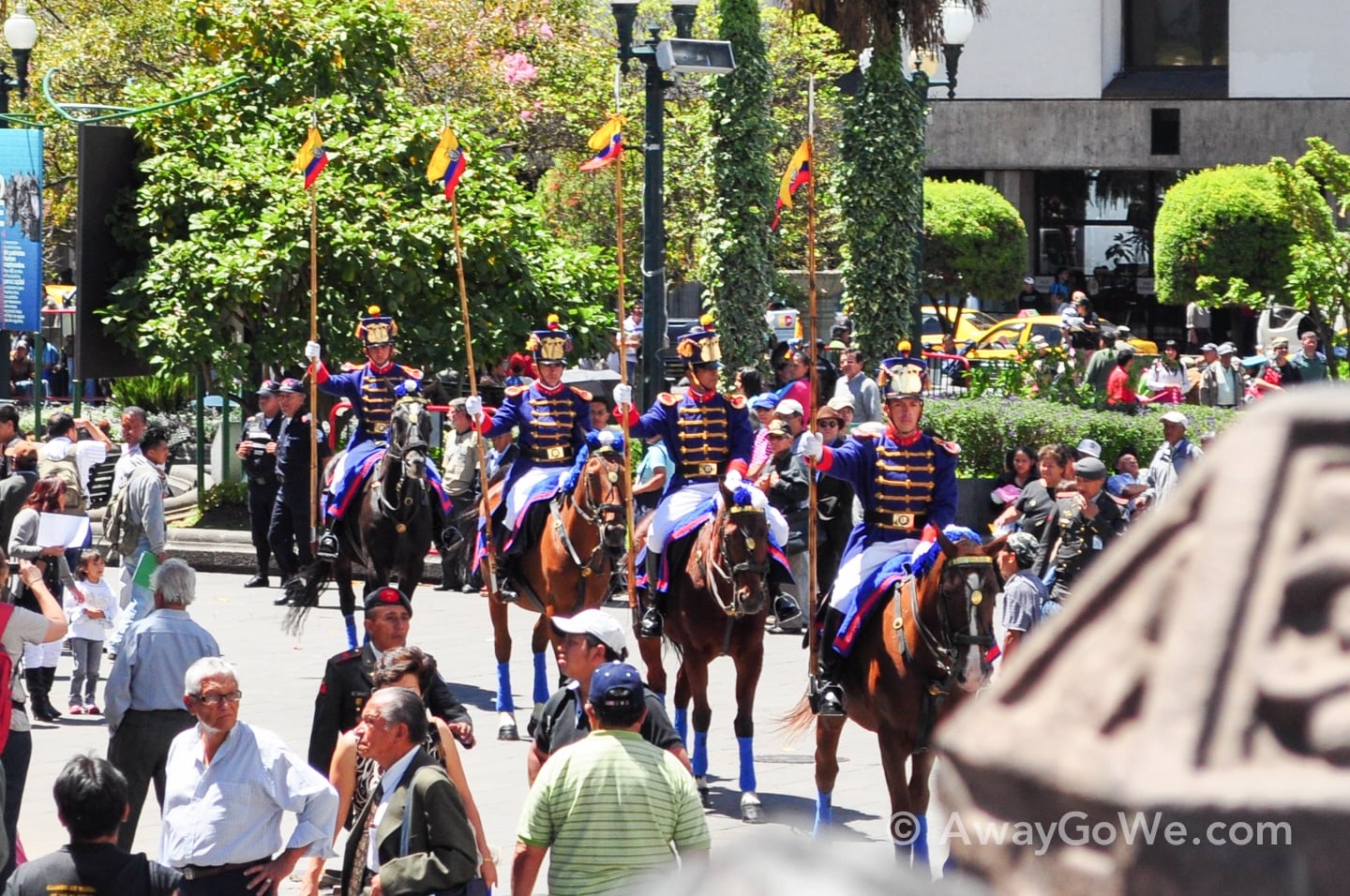 After spending an hour more in the Plaza de la Independencia than we had planned on, we continued on to a find a taxi to take us to the Virgin!

It’s not that the top of Panecillo is very far from the Plaza — perhaps a half mile or so — but again, this was a case where our guide book, and online information, and travelers we had encountered, etc., etc., cautioned us…well, emphatically told us…NOT TO WALK TO THE TOP OF PANECILLO — MUGGERS! PICK-POCKETS! RAPISTS! MURDERERS! LIONS AND TIGERS AND BEARS!!!

At some point, you start to wonder whether its all part of a plot by taxi associations or something like that. But we hailed a taxi anyways, who drove us the five minutes to the top of the extinct volcano. 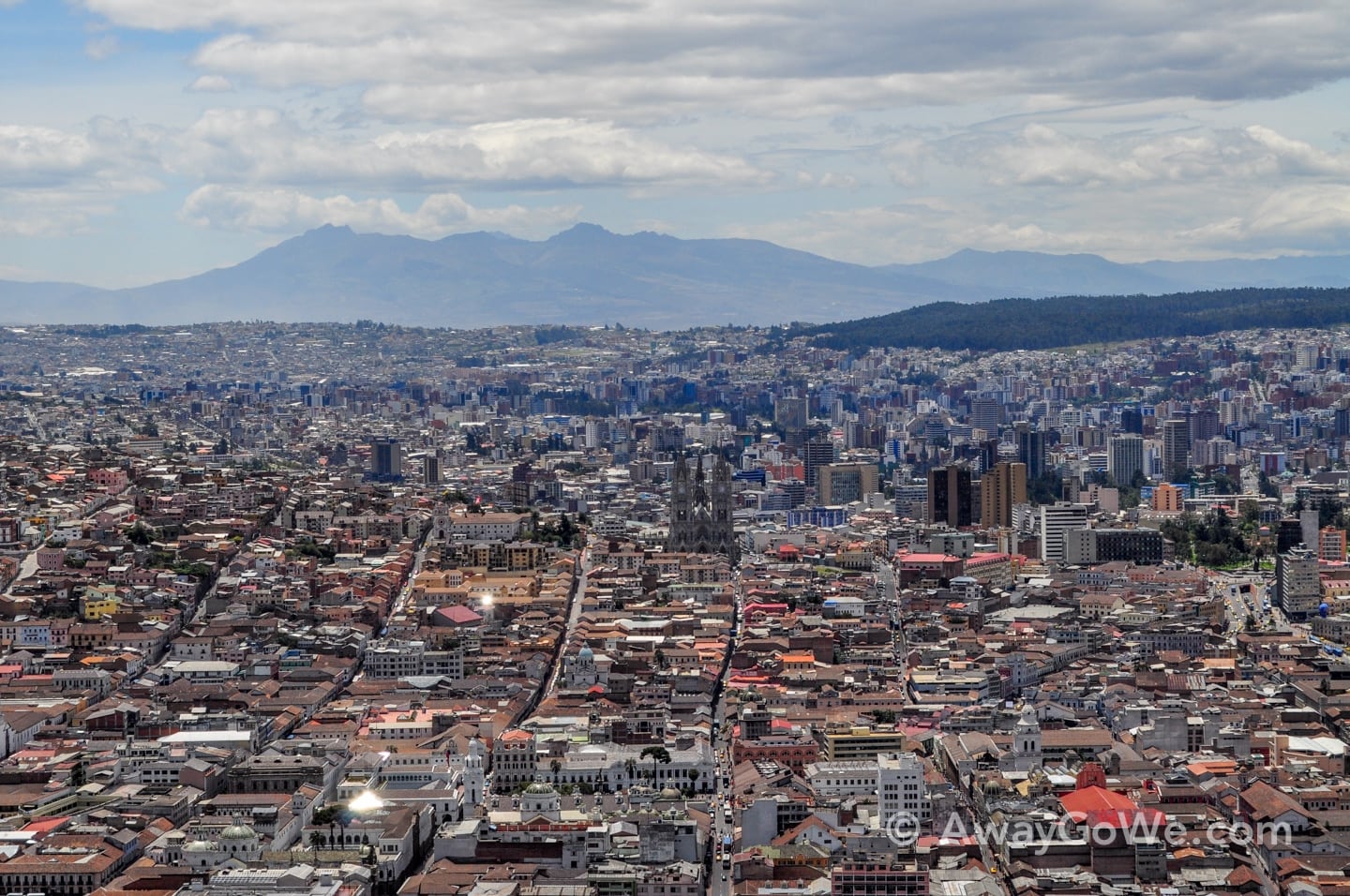 And there it was, a view even exceeding the incredible view from the basilica (which you can see at center). Old Town, splayed out in all its glory, surrounded by an encroaching sea of high-rises on all sides.

We wanted to relax and spend some time up here with Mother Mary (and the incredible view) so we told the cabbie his services were no longer needed. He was hesitant, at first, but eventually left when he realized we weren’t kidding around. Yes, this meant that we were on our own. DOO DOO DOOOOO! In the end, the only thing that accosted us was the frigid driving wind atop the hill.

We took the road back down the Panecillo without incident and lived to tell about it. Who would a thunk it. 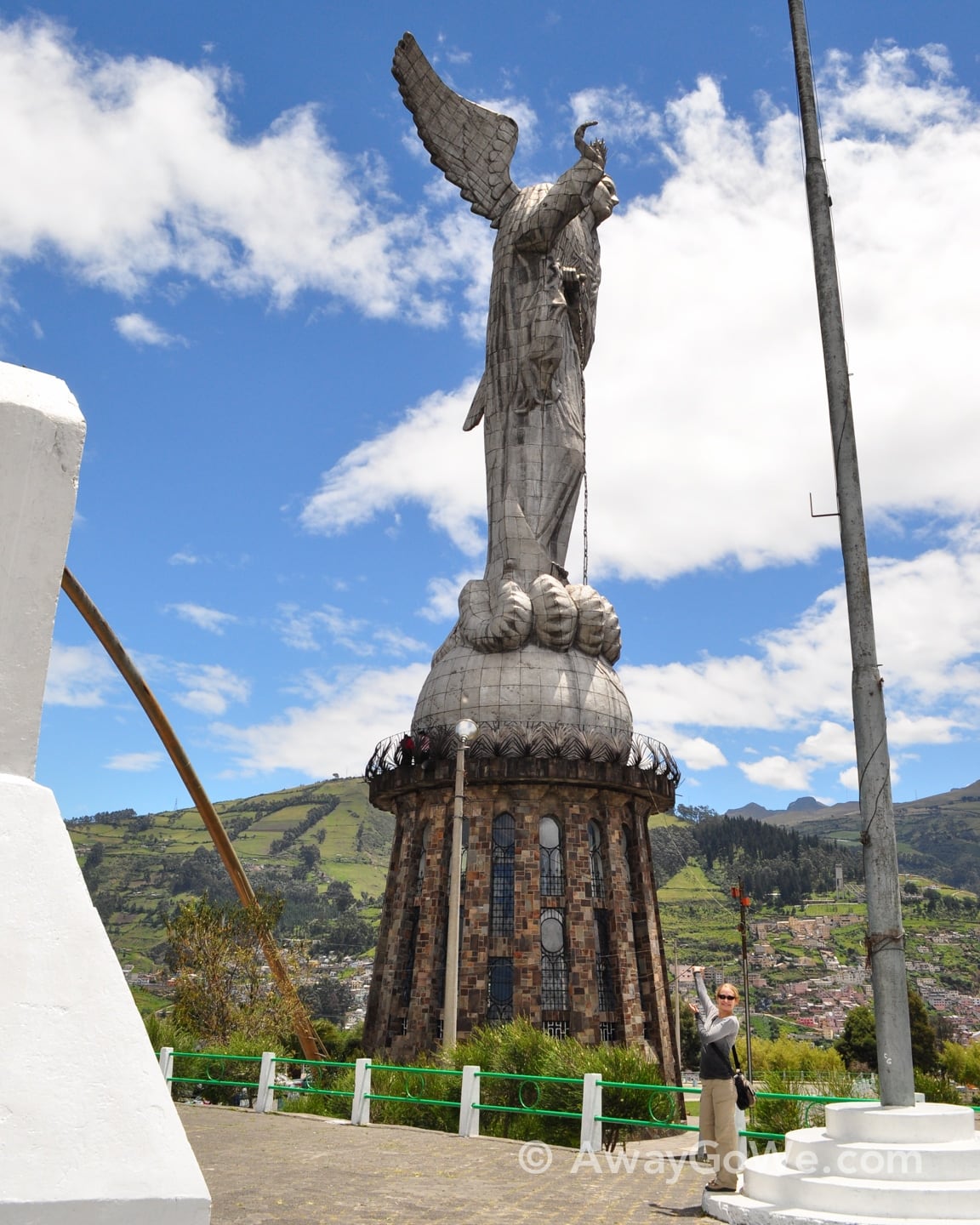