Arequipa to Cuzco by Bus

Another early morning bus ride Peru that ended up being a 10.5-hour adventure. 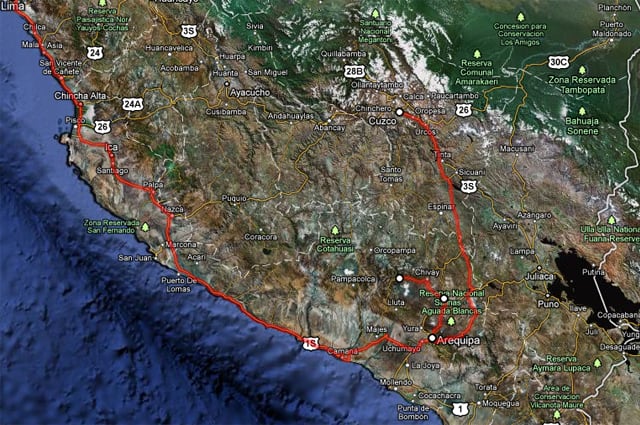 We decided to go with San Cristobal Del Sur because they were inexpensive and their buses looked nice. Our seats were at the very front of the raised cabin (they even had seat belts), great views…

…but our windows did not open!

See, funny thing up at 12,000 feet…the sun doesn’t care if it’s zero degrees Celsius on the other side of that pane of glass…as long as your protected by the wind and the sun is shining on you and there’s that much less atmosphere…things be heatin’ UP.

We tried, we really did, to suck it up. We disrobed as much as was socially acceptable to, put our water bottles on our necks and foreheads, even closed all of the curtains around through moments of really incredible scenery. And we weren’t alone of course. The couple in the front two seats on the other side of the bus were suffering as well. They looked fairly well-to-do and complained about the heat, but didn’t really take much action…I guess they already knew that there wasn’t much that could be done…but we refused to believe it.

At our first stop after about 6 hours Lori asked the driver if there was a central fan or air system that worked, he said yes, so she politely asked him to turn it on. We didn’t expect ice-cold air to start shooting at from the vents above us, but we did expect that the driver’s answer meant SOMETHING would blow out of them. Instead, the overhead emergency vents farther back in the bus were opened. The driver had done his job.

The breeze felt nice, and things started to cool down.

Until…an elderly senora with a wool hat decided she was absolutely against other fresh breezes and closed them. I was convinced at that point that the old lady would settle for nothing cooler than HELL, given the choice.

And so…it began to heat up, again, and we contemplated changing seats this time, but their were no other options. So Lori went back and tried to open the vents again, but the old lady had assembled a posse, and they told us to talk to the driver, so Lori did. The driver´s assistant completely understood and opened the vent again, then disappeared below. It began to cool down and we became slightly more comfortable, then….the vent was closed again!

By this time, all four of us up front were sweating like pigs and pretty close to losing it. I yelled back to the old lady and her crew and asked them if they´d like to trade us seats. No such luck…so I spent the next 5 minutes staring down the old lady, which turned into a full-blown, stone-cold cross-cultural staring contest which only ended after I realized she had actually been sleeping for the past 4 minutes.

We toughed it out for a short while longer until Lori decided to finally ask a friendly-looking abuela (grandmother) if she could crack the window near her, also closest to us, to get some fresh air. After sitting idling by, watching us suffer for hours upon hours, she smiled and unhesitatingly agreed to crack it open as if it hadn’t previously occurred to her, which made a WORLD of a difference. Gracias, grams. Gra-ci-as. 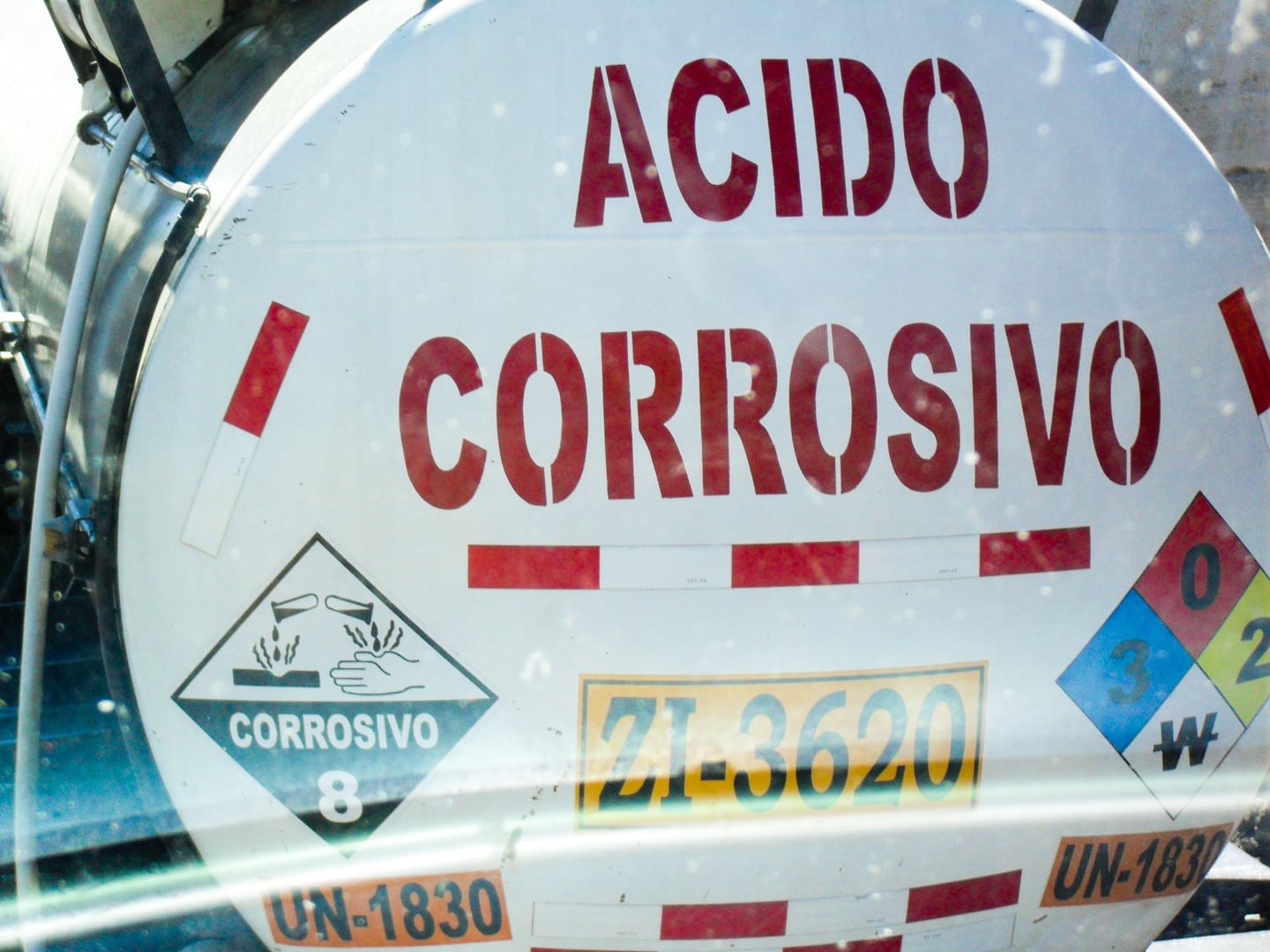 Just exactly what you always want your bus driver to be tailgating while riding in the very front of a flat-front bus going 70 mph on a 1-lane mountain road — a truck hauling CORROSIVE ACID! (no zoom was employed – or needed – in taking the above photo)

Aside from the heat drama, the other highlights of the trip were:

1) the meat cutting woman who boarded with her two nieces and a large piece of bloody meat-in-a-blanket, proceeding to hack away at the raw slab over the next hour…selling it to very pleased riders. The stench and the sound of course were awful. And…

2) the last two hours of the ride meandering through mountain villages and past rural farms. Strangely, it largely resembled a drive along a Southern Oregon river highway…well, plus some mud brick houses and sheep and pigs being herded along the road side.

Confucius say: One who travels north long hours during winter time in Southern Hemisphere (when sun is in north as well) at high altitudes… does… not… sit… up… front.

After arriving in Cuzco, our taxi dropped us off on a steep, narrow cobblestone street in front of our first-choice hostel in the funky neighborhood of San Blas. Lonely Planet had listed this particular hostel as their “Top Pick” and at the equivalent of $15 per night we were more than happy to take their advice. We were quite unhappy, however, to discover that in the two years since our guide book had been published, the price of a modest room in this quaint abode had risen to $45!!!

After looking around a bit, we hiked to the top of a very steep street and decided on what Lori called a “super cute,” out of the way hostel. We were quite pleased with the converted farmhouse and its free breakfast and internet…only 20 soles per person (like 7 U.S. dollars each!). We liked it so much in fact that we returned to it several times throughout our time in Southern Peru.