Quelimane’s a great place to lay low while waiting for impending doom to sweep a nation…it’s also got some other redeeming qualities as well. 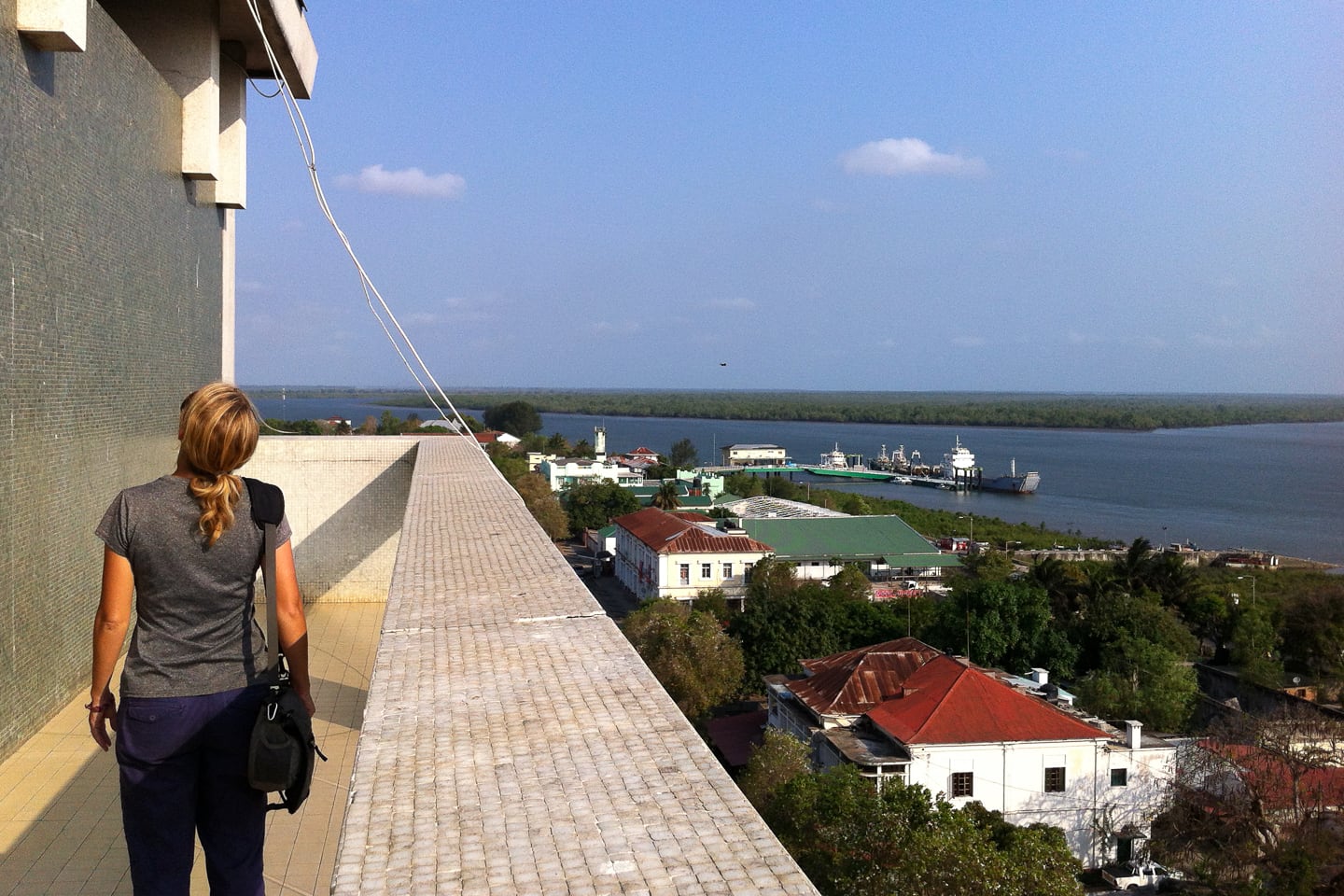 We rolled into Quelimane, the capital of Zambezia Province, on the day of the Mozambique General Elections. Pundits had forecasted a nasty, bitterly contentious and potentially violent outcome to the 2014 elections in Mozambique, given the renewed violence the country had experienced in 2013 and 2014. We had the misfortune of finding ourselves heading up through the conflict region in the lead-up to the elections and felt that moving north of Beira was our best option for continued survival.

It was actually a pretty cool trip from Beira to Quelimane, town after town, village after village, seeing democracy in action. Say what you will about the campaign or the results, but people turned out in droves, at least along that stretch of EN-1 that day.  Long lines snaked around large school yards outside of primary and secondary schools — many voters turning out in their finest Sunday dress. Our bus must have whizzed by several dozen scenes just like this. In many minds, the election may have already been decided, but every one of these individuals believed on this particular day, in Mozambique, that their vote was worth standing in the grueling spring heat for hours. 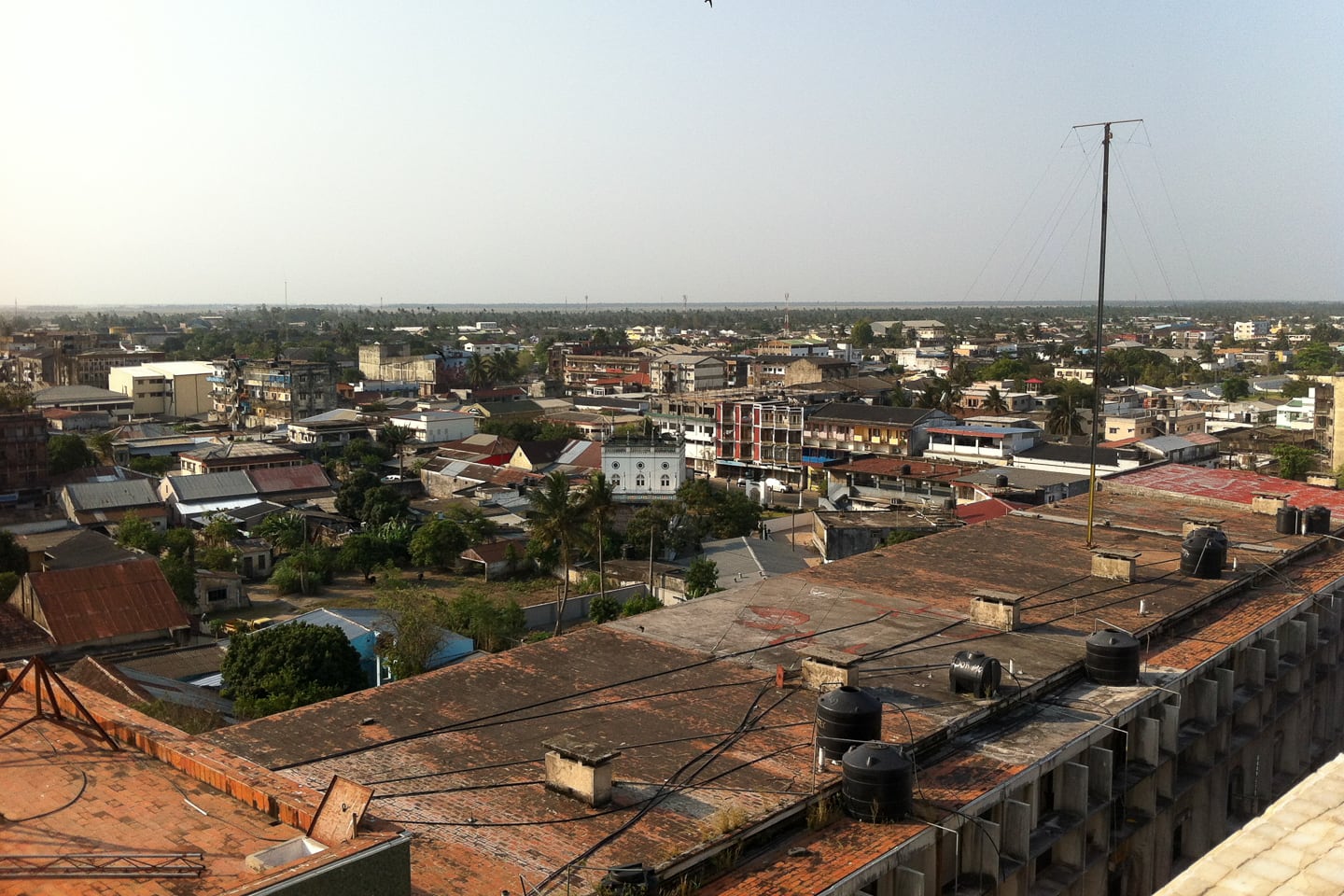 As our bus left Beira at 4am and the trip took about eight hours, it wasn’t a surprise when we rolled into Quelimane, the bus’ final destination, around noon. Now why bus companies in Mozambique feel that they need to leave at such an ungodly hour for an eight-hour trip is beyond me. Good news is, we got to see some really awful movies and music videos on board, and had the rest of the afternoon to explore Quelimane…

…which was a virtual ghost town. Everything was closed. Balls of trash tumbleweed ruled the main avenues. And we were starving. We tried two top picks in our guide book, both of which were closed today. It was election day after all. Nobody should be expected to do anything before or after their one or two hours of civic duty has been fulfilled. No one… 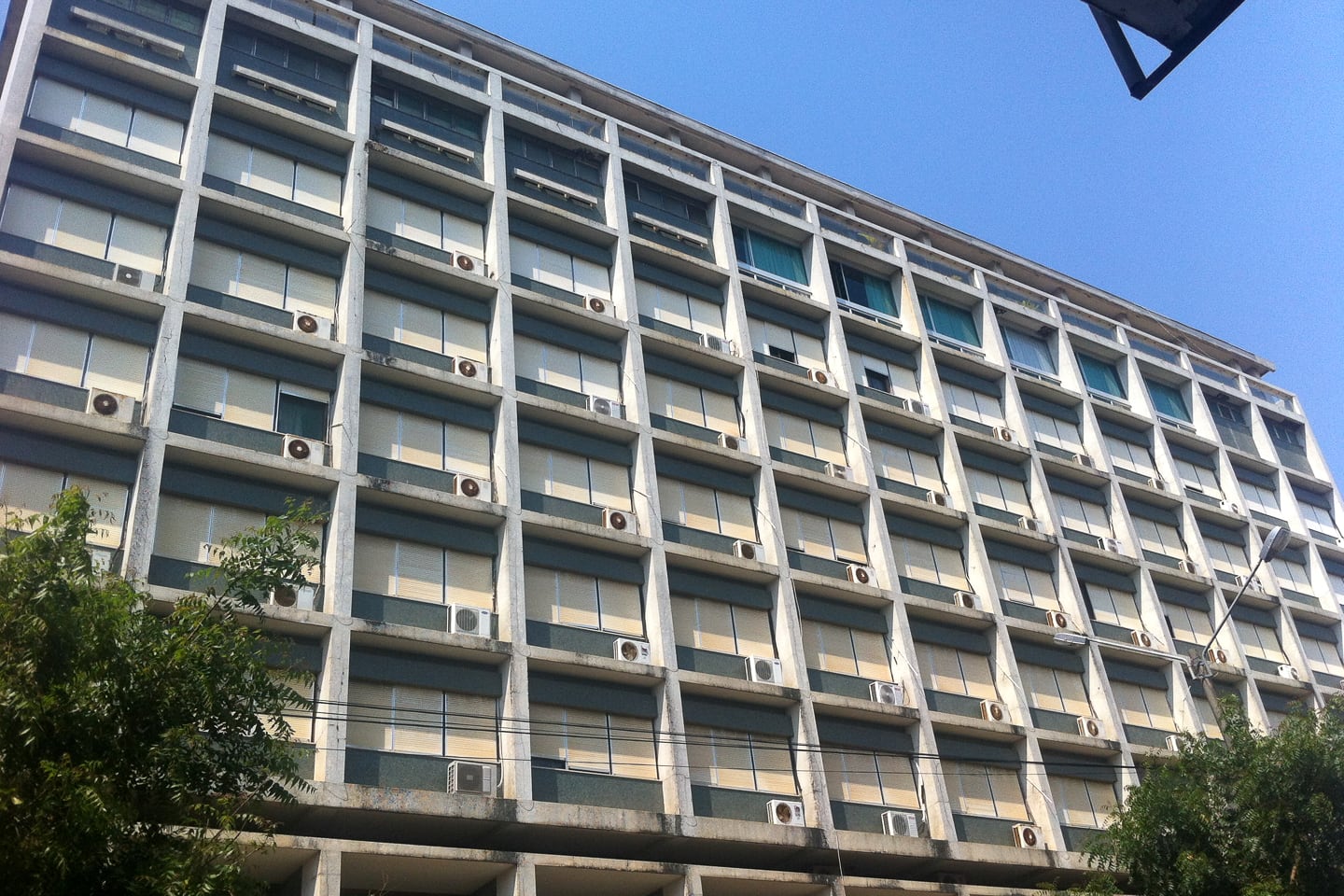 …except the folks at Hotel Chuabo, apparently (pictured above). There’s was the only restaurant open in town. Besides being an old international-style hotel with swingin’ ’60s architecture and furniture, we also read that they had the best view in town…and I’m sure this is the truth. We headed up to the seventh floor, then climbed the staircase up to the restaurant and were very happy to see that they were indeed open. Our half-chicken Zambeziano hit the spot (they were even kind enough to bring out two quarter chickens for each of us with sides for the same price as the half!). After our delicious and swanky lunch, we stepped out onto the balcony to take in the sights and sounds of Quelimane (I think we might have heard a pin drop) but still a surprisingly picturesque sight.

In addition to a few other international organizations, Lori’s been looking at Handicap International (HI) jobs for the past six months and one that was perfectly suited for her finally opened while we were in South Africa. She put the application together in Graskop and submitted it in Maputo a day or two later when we found reliable internet.

Seven days went by while we had decent internet access and she didn’t hear anything back. Then, we found ourselves in a dead zone of internet for nearly four days, finally finding a place (Hotel Flamingo) that offered wifi for a price in Quelimane. Lori was terrified to find that HI had been trying to contact her all week about setting up an interview. The last time we had internet access was Sunday night. They emailed her Monday morning, and then again Thursday morning. It was now Thursday afternoon. We had no idea that it would be so hard to come across internet in Beira or Quelimane, but it was, especially with the elections and staying at a $28/night brothel ‘n all… So yes, she was able to get ahold of them and everything was cool and they scheduled an interview for tomorrow at 2pm. It would be another travel day for us and cutting it close, as our bus was due into Nampula around that time, but it was a Friday and she really didn’t have another choice, so Friday at 2pm it was going to be.

After that, I said, “No more!” I went straight to the mCel store (mobile phone company) and had them tweak my phone so I could get data on it. In Mozambique it is so cheap and easy to get data on your phone. You buy a SIM card (I prefer mCel) and add some credit to it (start with 100MTS…like US$3). Then, all you have to do is text “100MB” (without the parentheses) to 822022, or 500MB or however much you want. Currently 100mb costs 40MTS. I had done all of this but my data was still not working. So I went to the mCel store and they fiddled with the phone for a few minutes and it worked! Looking at it afterwards, I think they just added “isp.mcel.mz” as the APN under Cellular Data in the “Cellular” settings of my iPhone. And then it worked, and we had internet wherever we had phone service! Not perfect, but exponentially better than before. 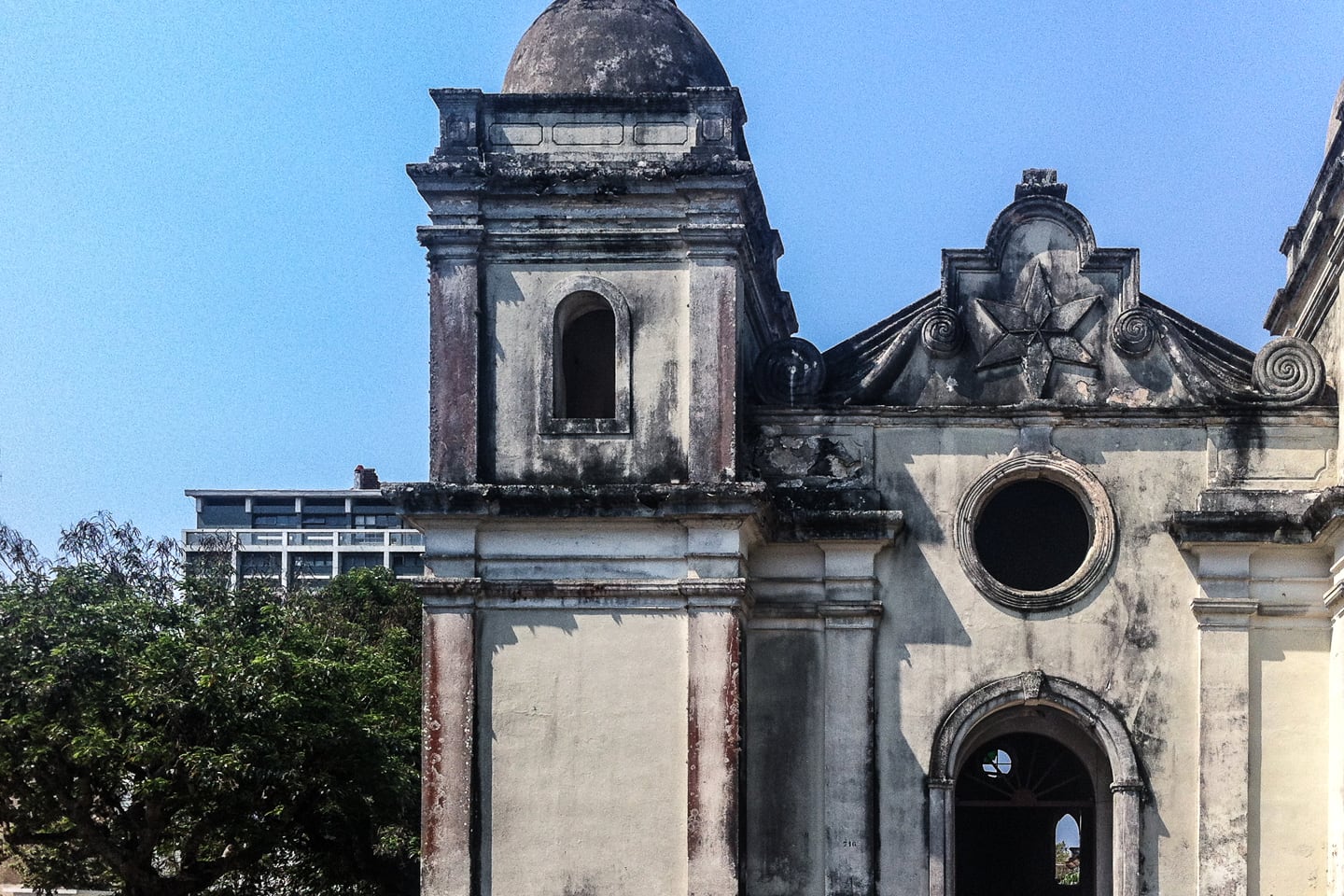 There’s an old cathedral in central Quelimane that is worth a visit. It’s ruined, absolutely unusable, and completely abandoned. The best part is, you can go in through one of the sliding rear gates and have a walk around. A bit creepy but very interesting. Just watch your head! 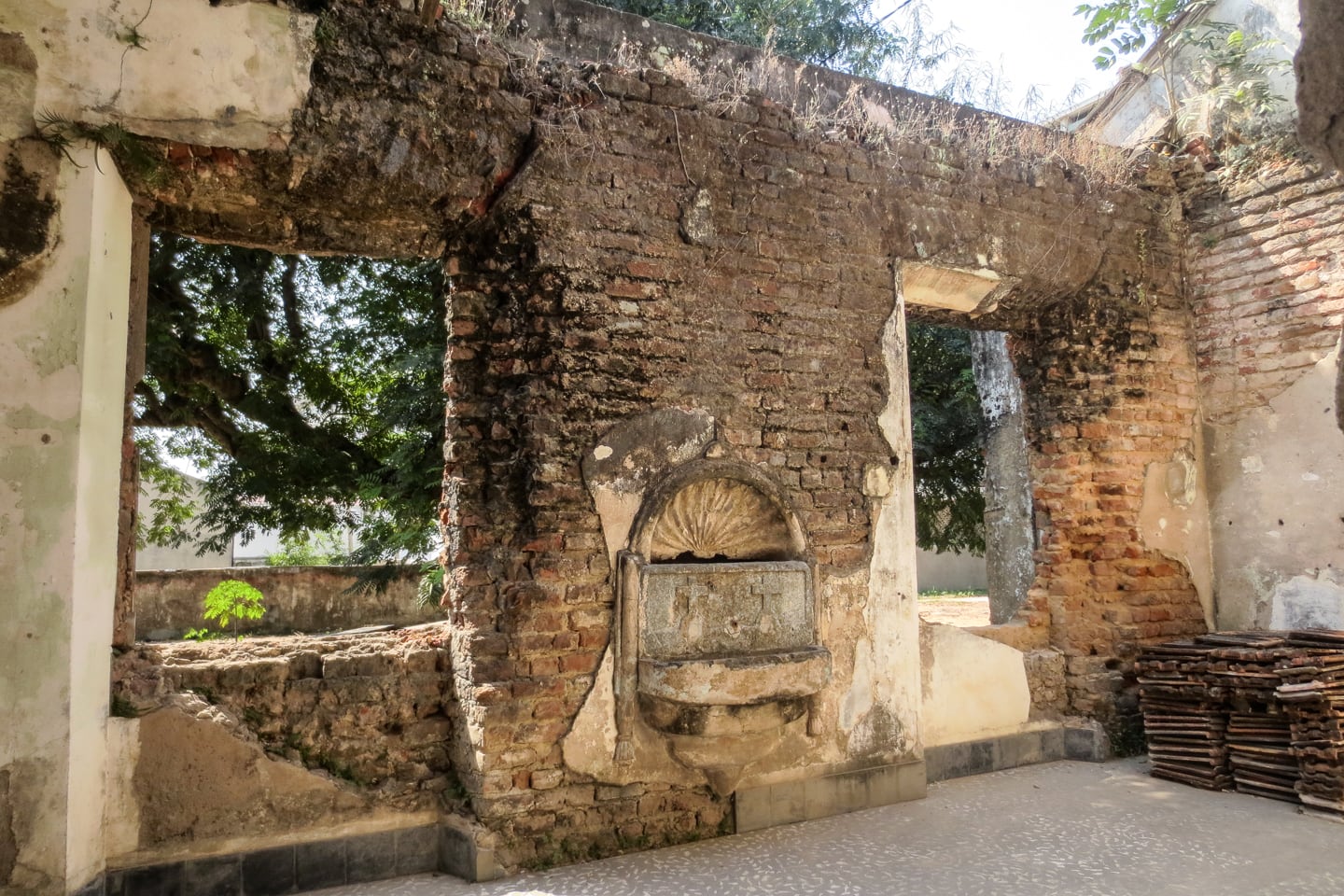 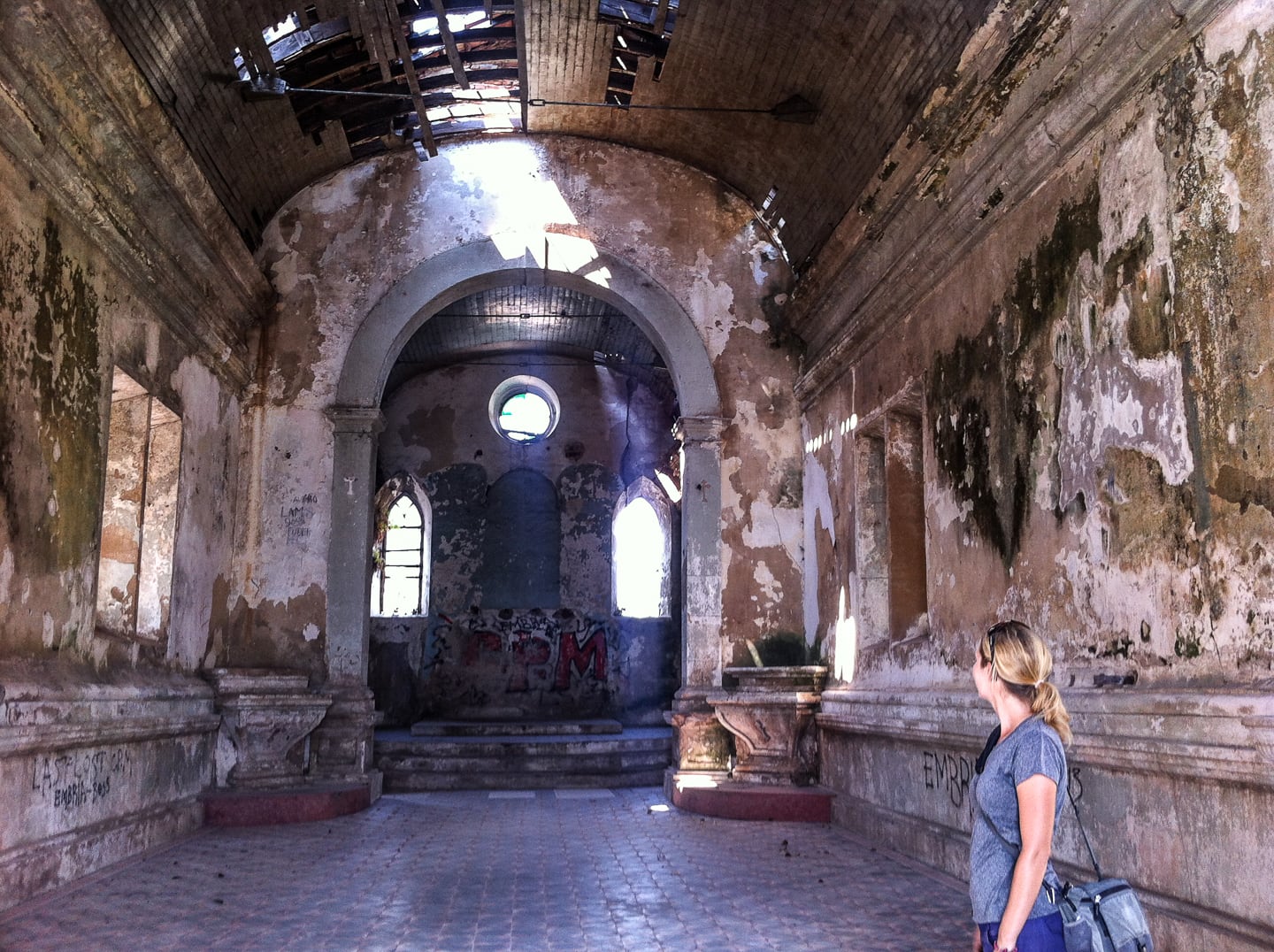 This is a good time to tell you about our guesthouse: Pensao Ideal. It was centrally located, clean (save for the epic amounts of mildew in the shower) and had AC and en suite bath for US$28 (800MTS). If you need a place to crash in Quelimane, it served us well for two nights. 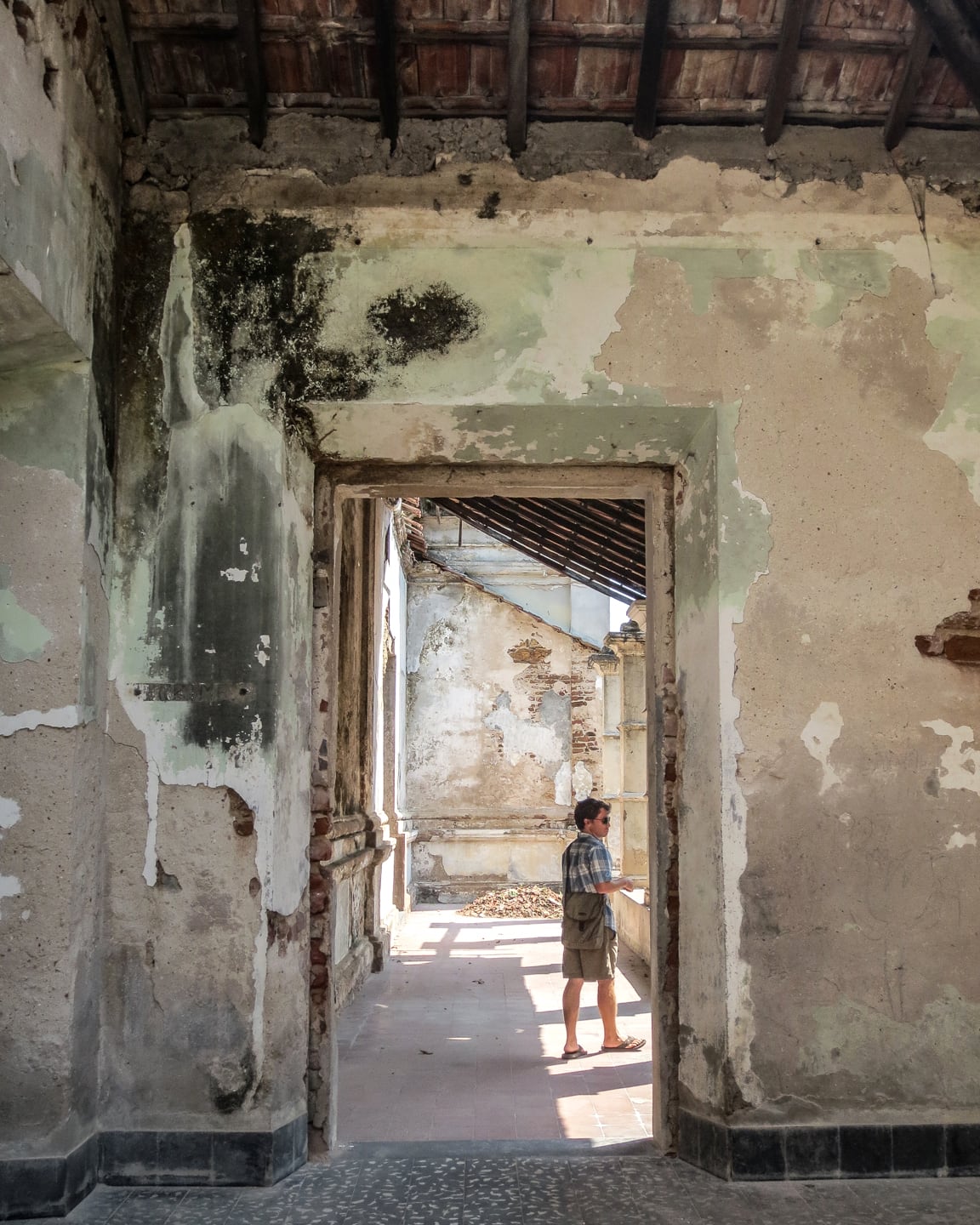 Getting the bus tickets north to Nampula was a minor nightmare. For one, most of the express buses in these parts don’t run every day, just select times of the week. The Post Bus still didn’t have its act together (it was Thursday morning when we bought our tickets and they still didn’t know if they were running on Friday). Nagi bus was running Friday so we took them. We tried to get out Thursday but the elections messed all of the schedules up and it was virtually impossible to head that direction on a bus. We could have done chapas, but were willing to wait the extra day. We must have walked back and forth from the bus station to our guesthouse a half dozen times over Wednesday and Thursday trying to figure everything out. But in the end we had tickets for Nagi bus to Nampula at 4am on Friday.

Oh, and the windows opened on the Nagi bus and I finally got my bananas! And they were awful, just under-ripe and horrid monkey bananas.

Better luck next time I guess. 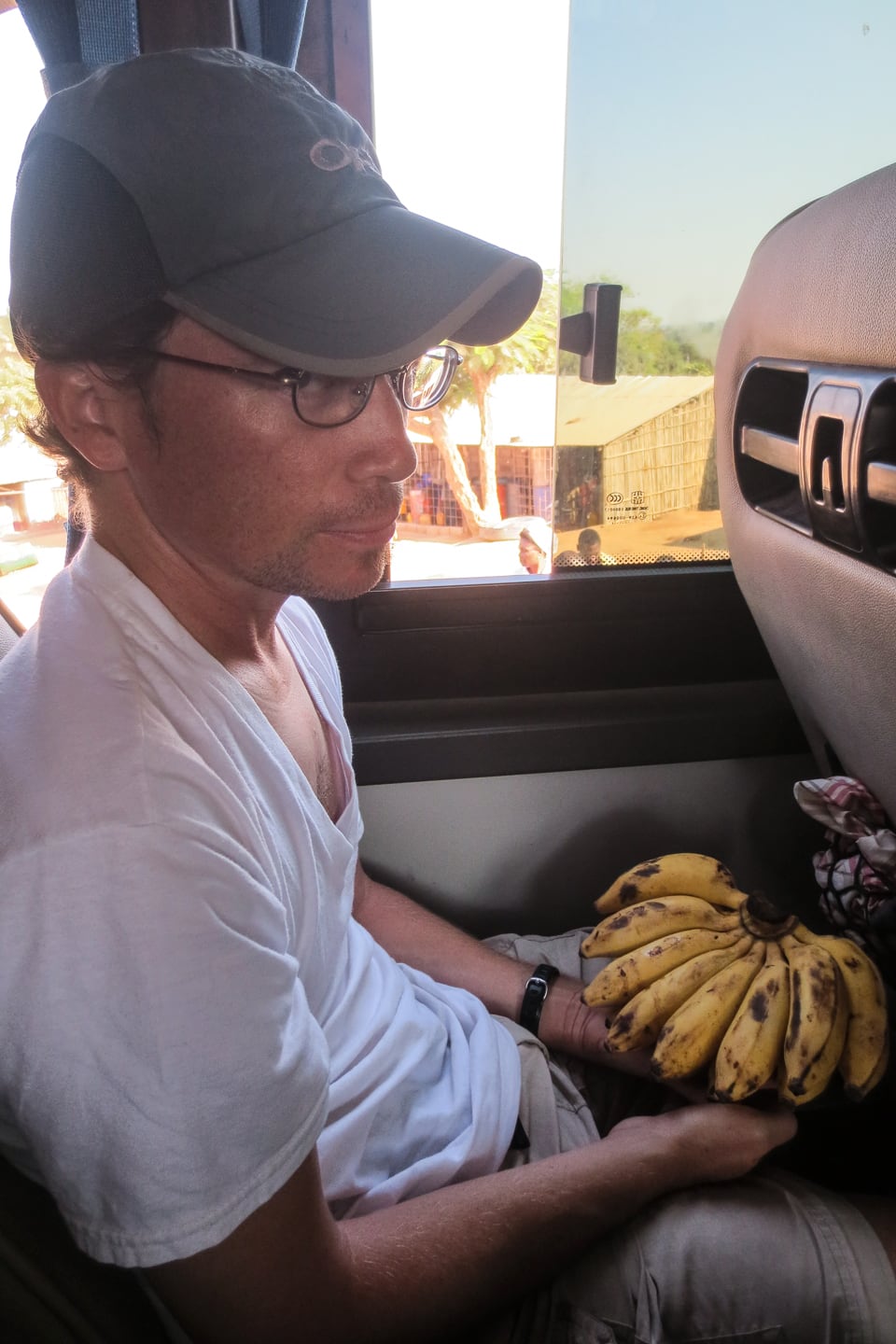 I knew you should write a suspense novel. I hope you will recap Lori’s job ap in your next post.

So did Lori get the job? And where is it – don’t keep us all hanging!