Sandakan is Sabah’s gateway to the jungle. Not known for much else these days, this unassuming town’s myriad trekking agencies and backpacker hostels belie Sandakan’s unique history and quirky offerings. 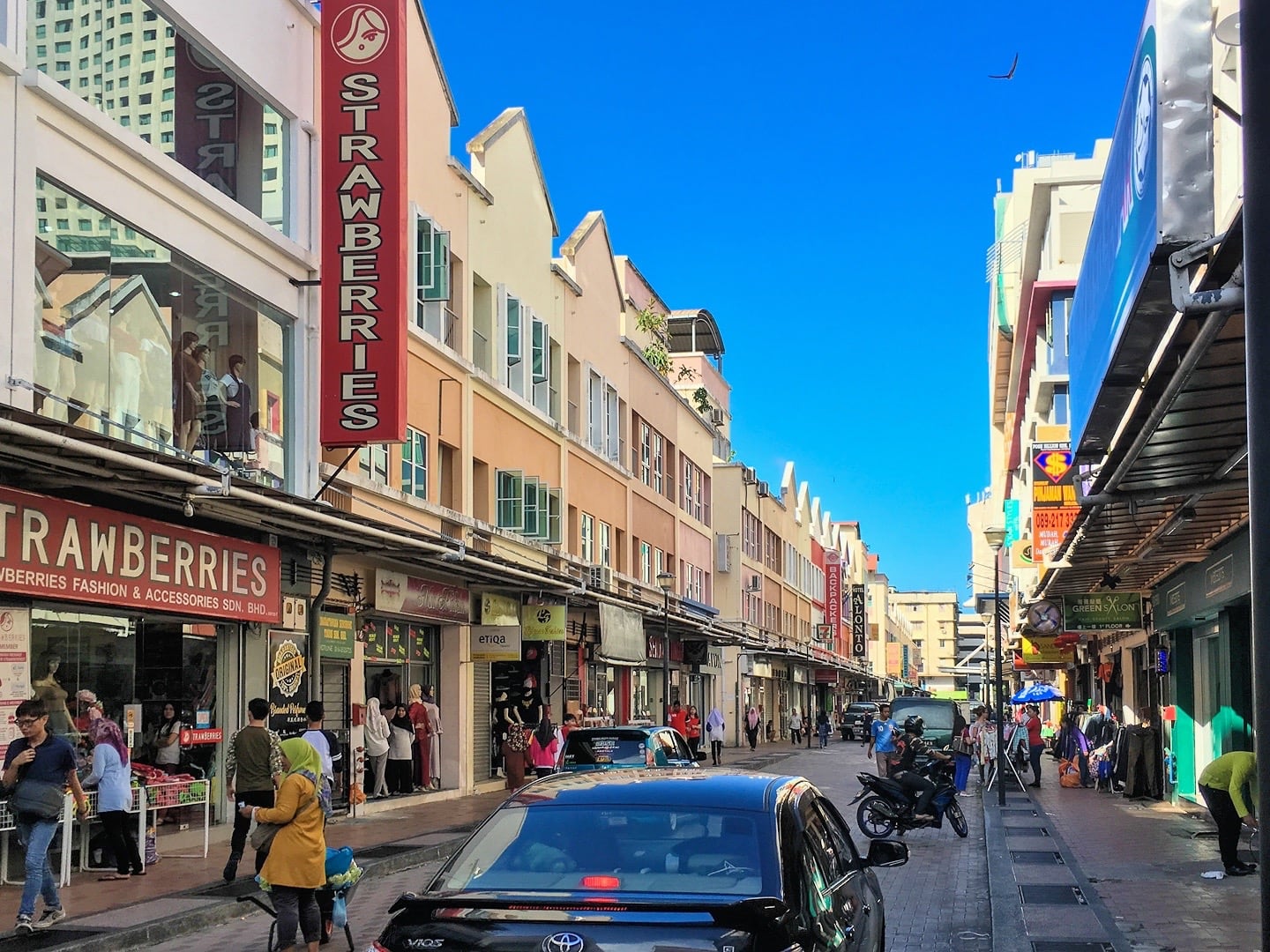 Everyone seems to have had a hand in Sandakan at some point—from Scottish arms smugglers and Malay sultans, to Spanish and British colonists, to Chinese merchants, and even the German. Sandakan was named by the Scots, meaning “the place that was pawned” in the local Suluk language. It was later renamed Kampung Jerman (Germantown), and then Elopura by the British, meaning “beautiful town.” The locals weren’t fond with the British renaming their town (despite the flattering tone) and it eventually reverted back to Sandakan—I guess the “Place that Was Pawned” just has a certain ring to it.

Unlike Thailand, “budget” here in Malaysia seems to mean buuddggeet. While there are ultra cheap deals to be had throughout Thailand, there are few comparable deals in Sabah (and by “deal” I mean value for the money—NOT to be confused with “cheap”—two completely different things). You’re either paying US$40-$50 per night for AC and ensuite bathroom (no breakfast included), or sharing a bathroom (or room with five others) in very basic digs for anything less than $40.

Things might be a little worse in Sandakan in that respect, as most visitors in our situation seem to head straight from the airport or bus station to Sepilok (about 30 minutes inland on the edge of one of Borneo’s most famous jungle reserves), or to the Kinabatangan, which is exactly what we’re doing…just starting early tomorrow. 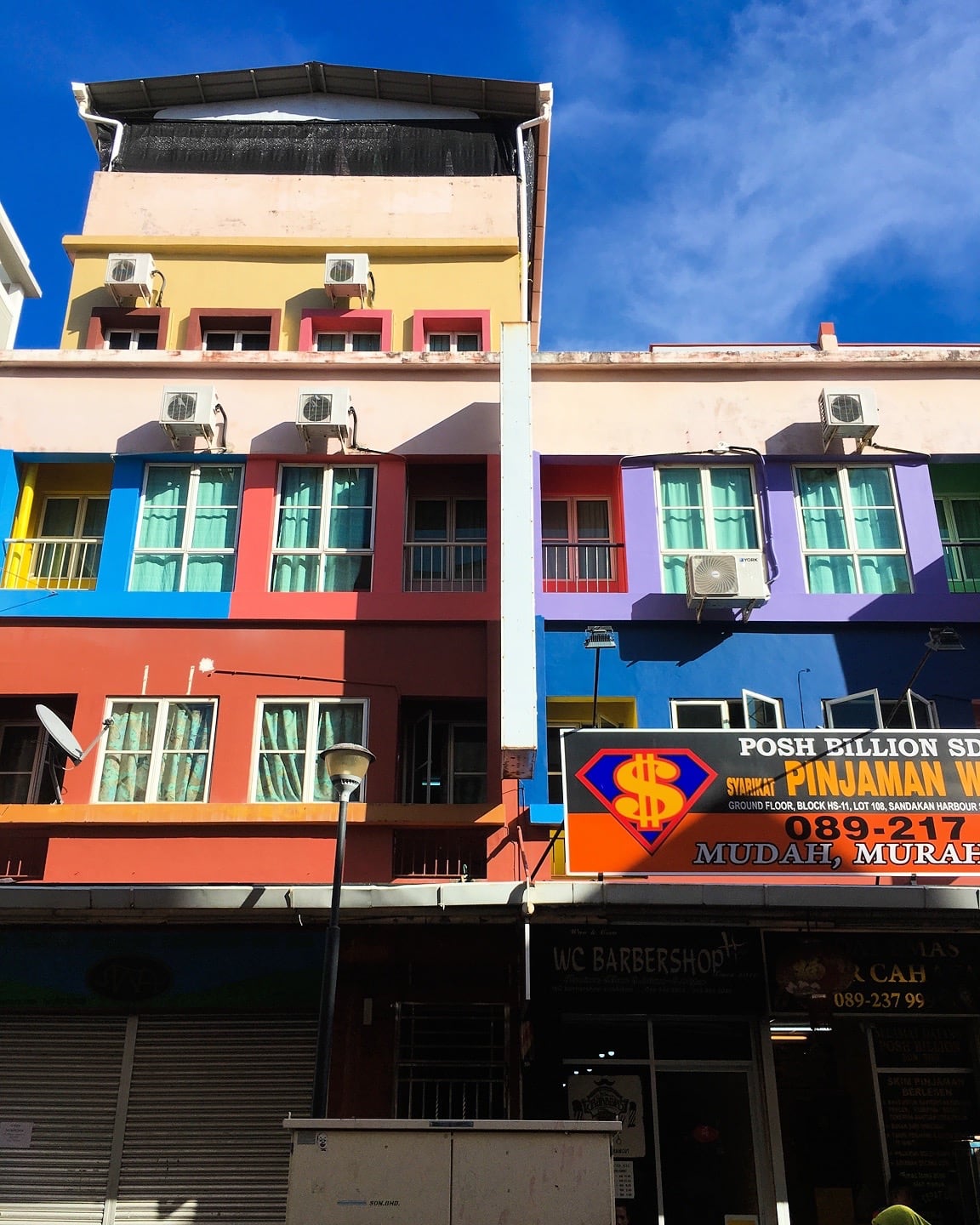 There is a selection of cheap hostels in Sandakan town, but there wasn’t a lot to choose from in terms of value for the money. After researching options, I ended up booking with Sandakan Backpackers Hostel (pictured above and below). 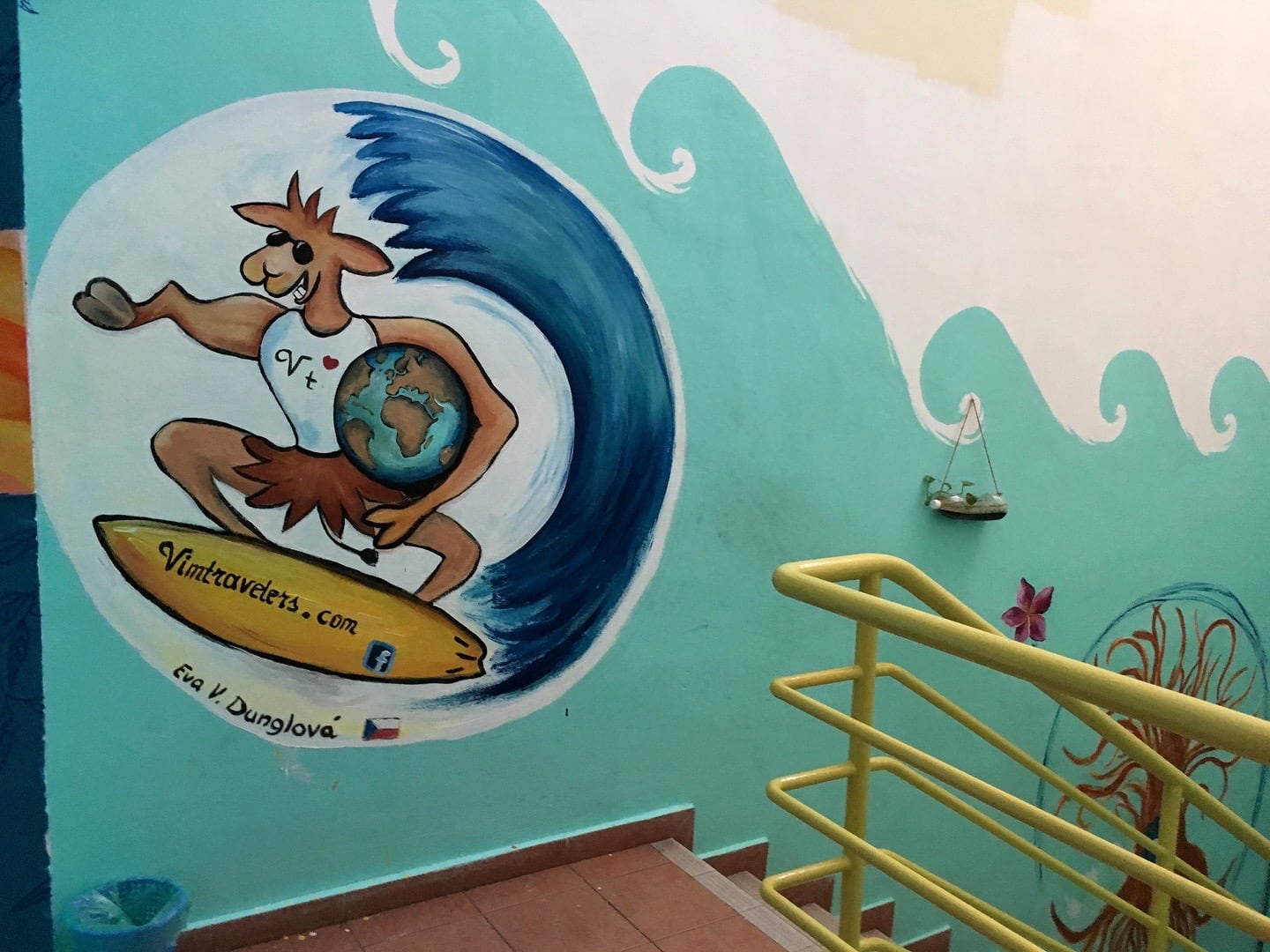 I knew I was taking a chance putting the family up in a hostel in a transit town—not to mention my pregnant wife in a room without a bathroom (we’d be sharing one down the hall)—but knew Lori would be more upset with the prospect of spending an extra $20-$30 just to have our own bathroom.

Plus, we both get excited these days any time the situation dictates that we stay in a hostel-type accommodation. Lots of memories of hundreds of stays, but less feasible on the whole these days with an infant/toddler (though we’re slowly creeping our way back that direction…until the next kid). 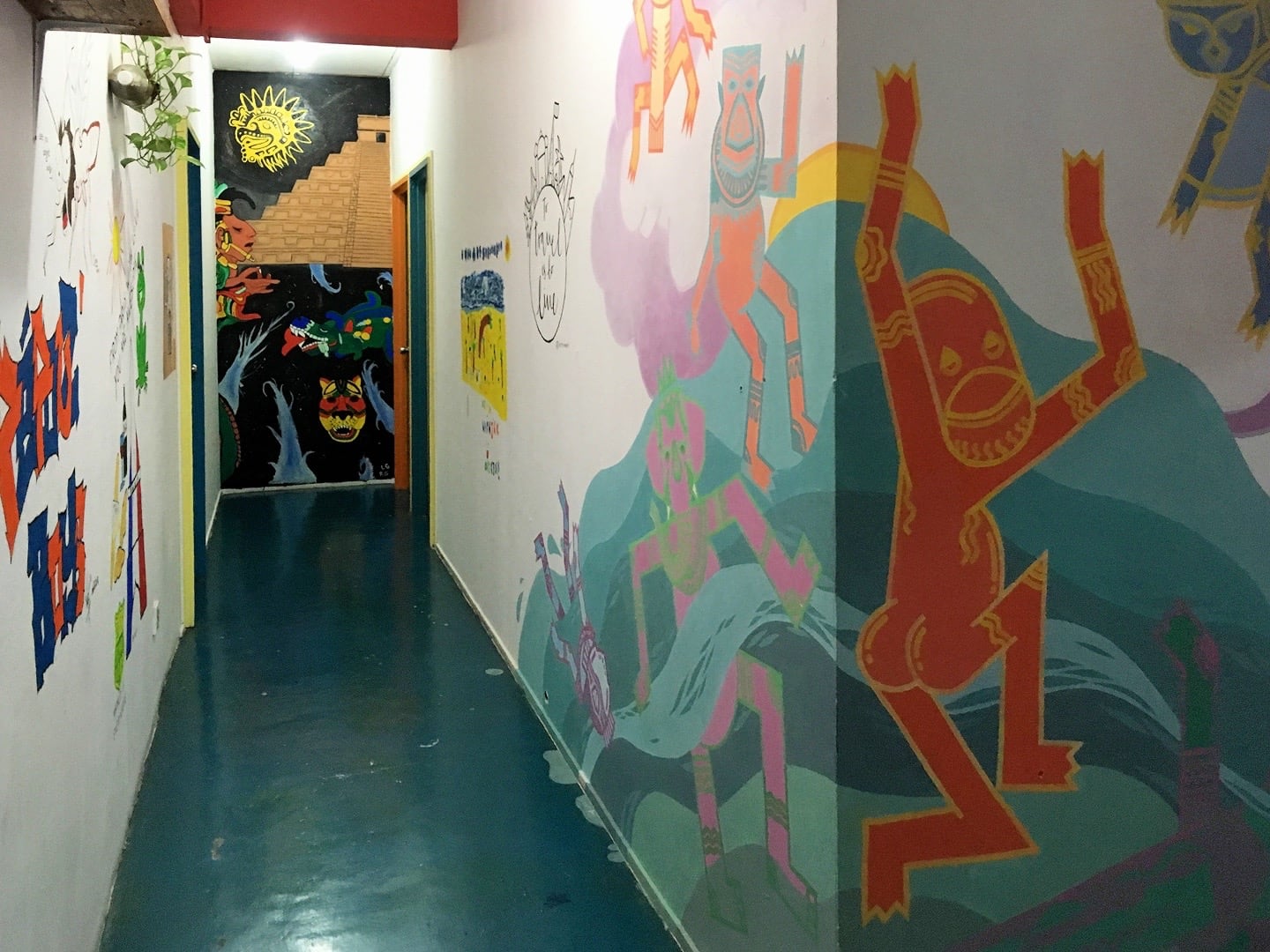 Here, I’m standing at the bathrooms (there are three in this section for five rooms—excellent ratio, if you ask me), and our room is the last door on the right—definitely one of the closer and more comfortable shared-bathroom situations we’ve had.

Perhaps the most inconvenient shared-bath situation in an actual hostel (not camping, etc.) we’ve had was our stay at a large guesthouse along Tiger Leaping Gorge in Southwest China’s Yunnan province. Down a flight of stairs and about a hundred meters to a separate out-building. This obviously doesn’t count rural places where you can just step out and do your business a few feet from your hut/bungalow/etc.

“The guest house complex is beautiful, but these rooms were a bit rough around the edges—the linens seemed like they hadn’t been washed in a while, the floor was quite sandy and the shared washroom was a complex outside of the compound (a good minute’s walk across the compound and down a gravel driveway). The walls are very thin (the thickness of a pine board) with large holes where wood knots had fallen out where one could most certainly peep on you if they wanted to (we promptly plugged up the three in our room given privacy and the fact that the Chinese dude next to us was a literal chain smoker, smoking and watching movies into the wee hours). These rooms will set you back about 70 RMB (US$11).”

Suddenly paying US$20/night in 2018 for a private room with shared bath just down the hall seems pretty decadent.

Regardless, Noe didn’t care one way or another. His toilet still follows him around wherever he goes. 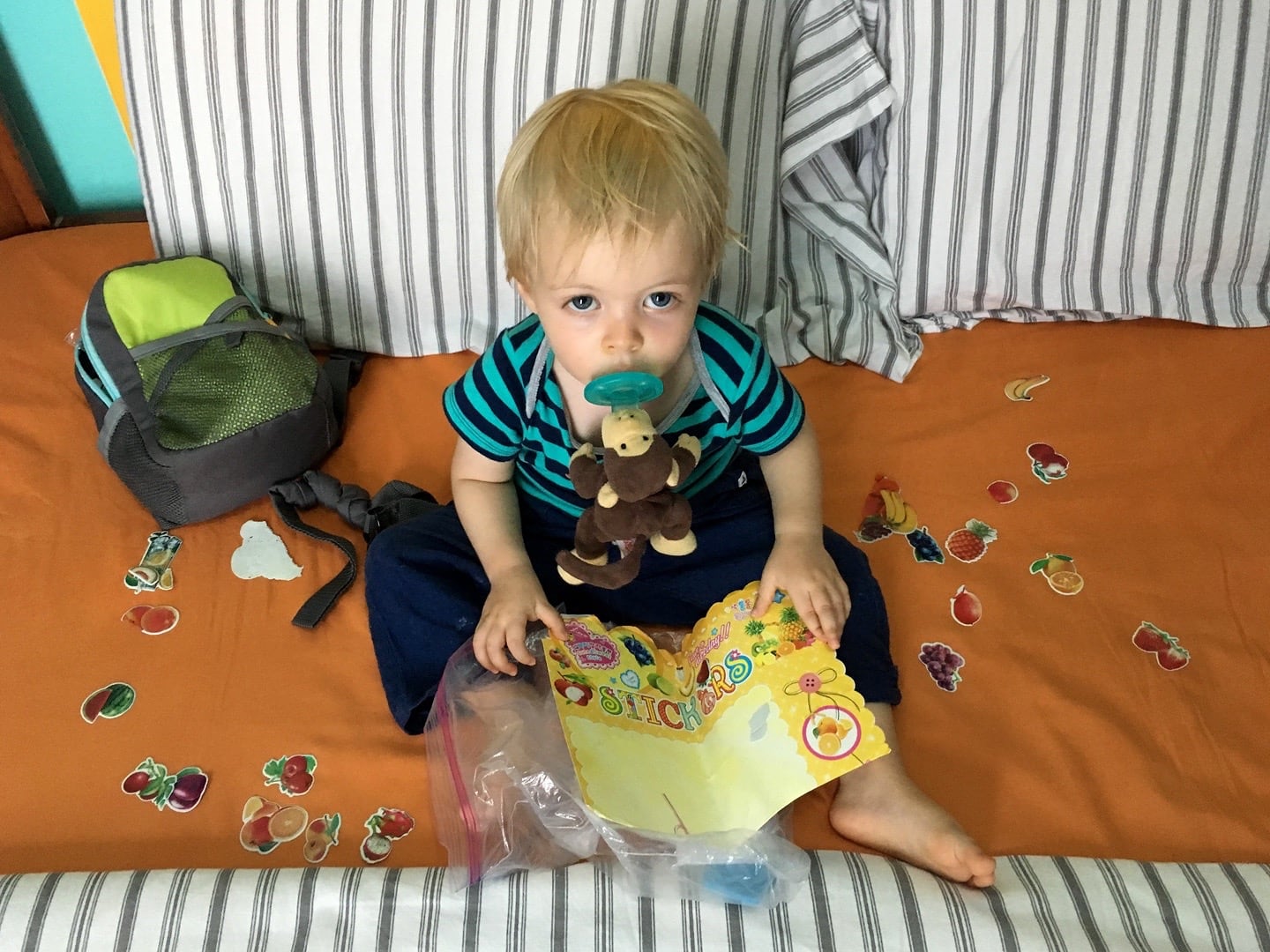 When we’re on the move a lot these days, he seems to revel in the first hour we unpack in a new place. Today, he hopped up on the bed, got himself situated right under the A/C vent, and proceeded to mark his territory, carefully placing his travel stickers neatly around him, one-by-one. These cheap stickers we got a 6,000 kip store (roughly equivalent to a Dollar Store) in Vientiane continue to be a life safer. They are easy to remove and happen to picture one of his favorite things in the whole world—FRUIT. 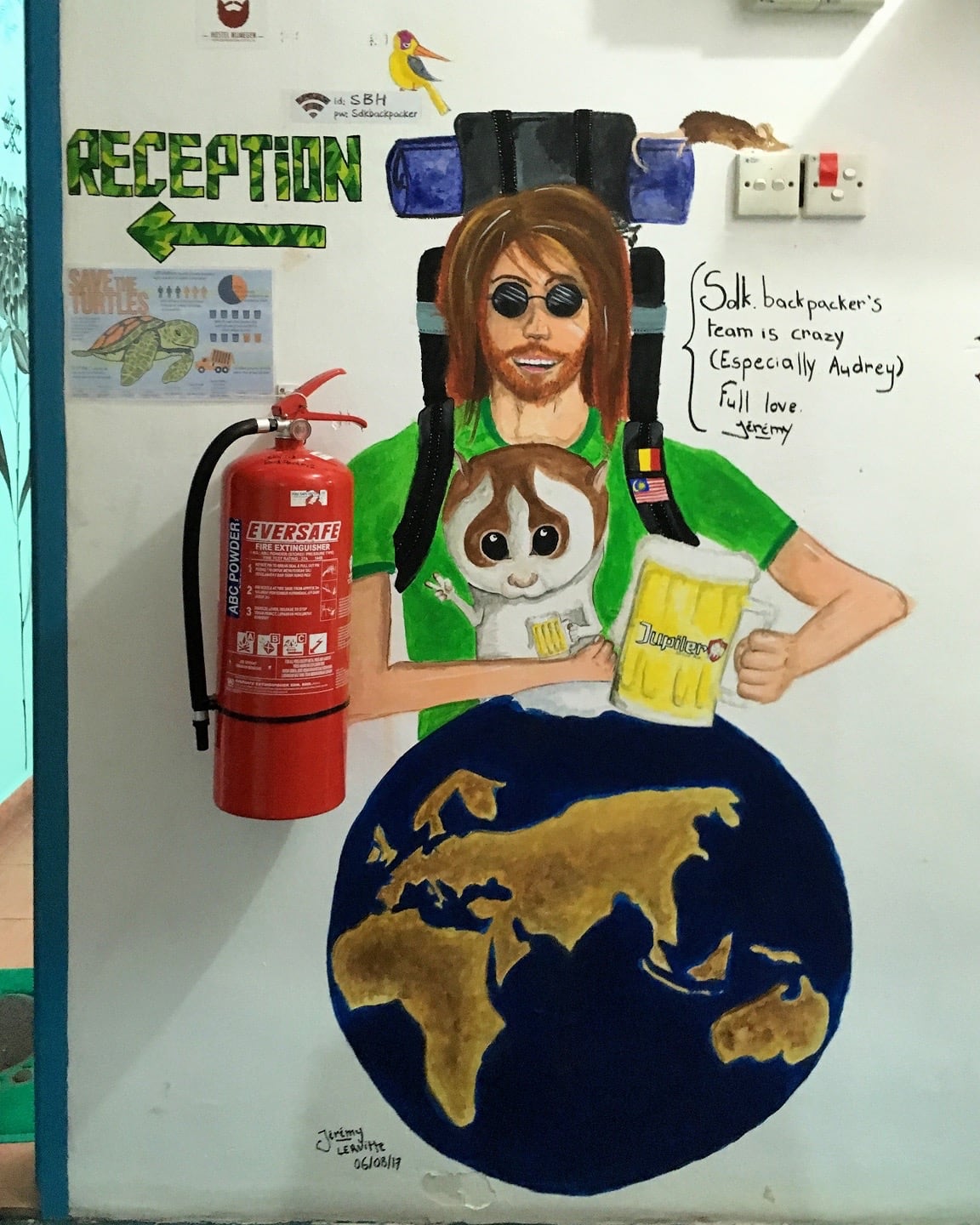 Noe’s (and my) favorite wall mural at Sandakan Backpackers.

After settling in, it was off to lunch. There was a McDonalds just around the corner in a large mall complex, which sounded quite novel to us. We’ve been to the Golden Arches maybe one or two other times in the last year (Western fast food chains don’t exist in Laos—with the exception of Dairy Queen and Church’s Chicken (called Texas Chicken in Laos), so no McDonalds, no Burger King, Starbucks, etc.—which we’re generally fine with…until we go to some place like Thailand or Malaysia. All of a sudden, it seems very exotic to get a Double Cheese Burger and fries (they offer nacho cheese with your fries in Thailand!).

Problem is, Noe hates the stuff. Not so much a long-term problem of course, but difficult in the moment to feed him in a pinch. There’s really nothing on the menu he likes. The closest we’ve gotten is peeling chicken nuggets and giving him the chicken inside. And French Fries, forget about it. He’d much rather eat chicken pad thai, dahl roti, sticky rice, or fruit.

We also discovered that McDonalds in Malaysia is not the place you want to go if you have a blonde-haired, blue-eyed toddler and don’t like a lot of attention while you eat—and by attention I mean several dozen women and children staring, pointing, talking about (in English), and touching your child while you’re standing in line, walking your food to the table, sitting down, and eating. In Laos and Thailand, Noe definitely makes friends quickly, but they seem to take their five seconds to gawk or say “hi,” then move on with their lives. In Malaysia (particularly in this smaller city), it feels more intense. And Noe’s even taken notice. He’s gone from playing shy (he’s not a shy kid, per se) at the beginning of our trip to getting downright angry when people here crowd around him, and I don’t blame him. Culturally here, I have found that me wearing him (versus Lori) helps mitigate the stares and touching (and so does a cornered and angry toddler, for that matter). 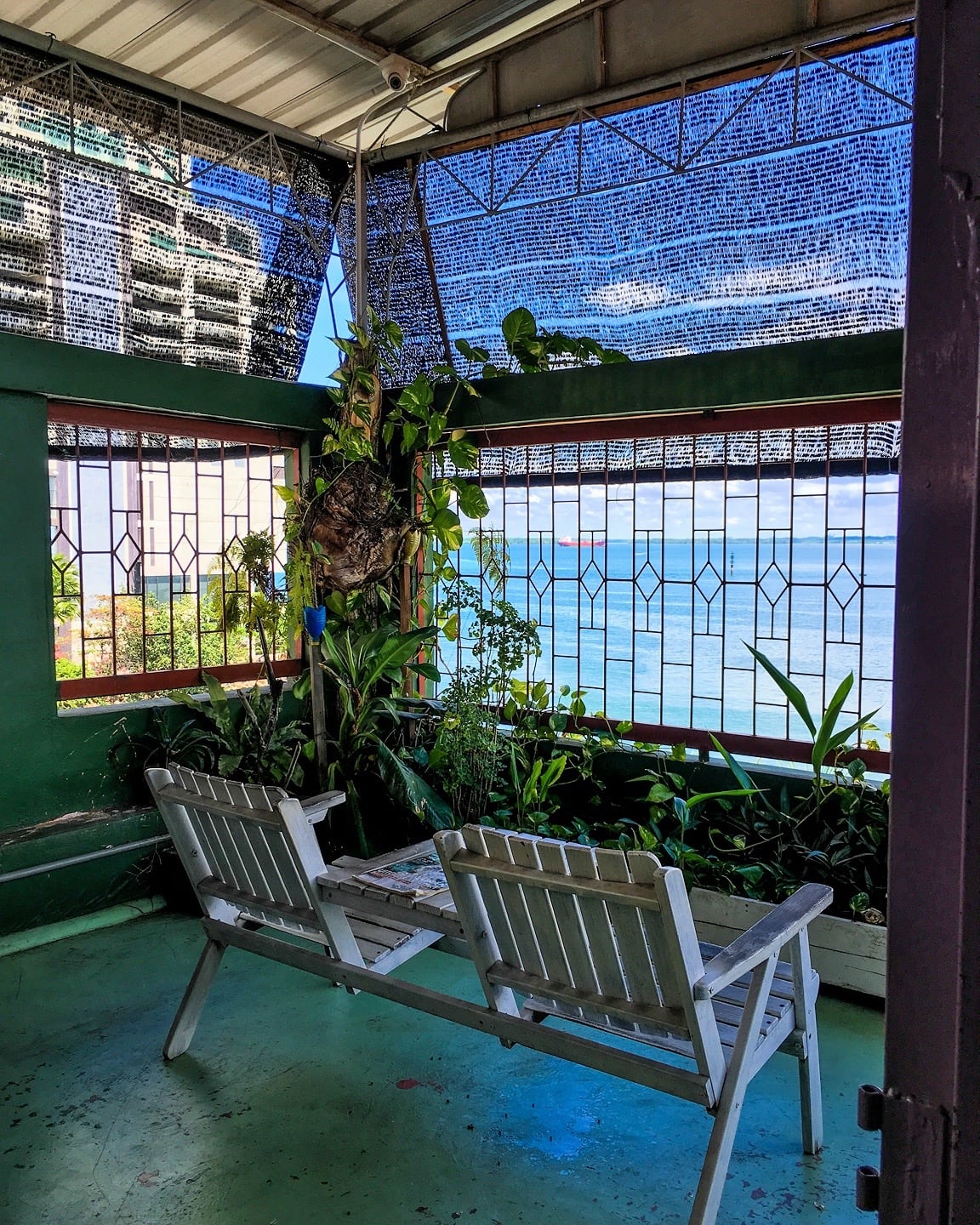 After our exotic McLunch, we retired to our digs to put Noe down for his afternoon nap. The hostel has a nice covered rooftop common space (albeit quite HOT in the heat of the day) with a commanding view of the bay, so we were excited to confirm that the baby monitor had no problem getting a signal. 2-3 hour naps are great for Noe, but can be a major bummer for the rest of us being confined to the dark and silent sleepy space for the entire afternoon every day on vacation. Thankfully, the baby monitor has been doing its job. 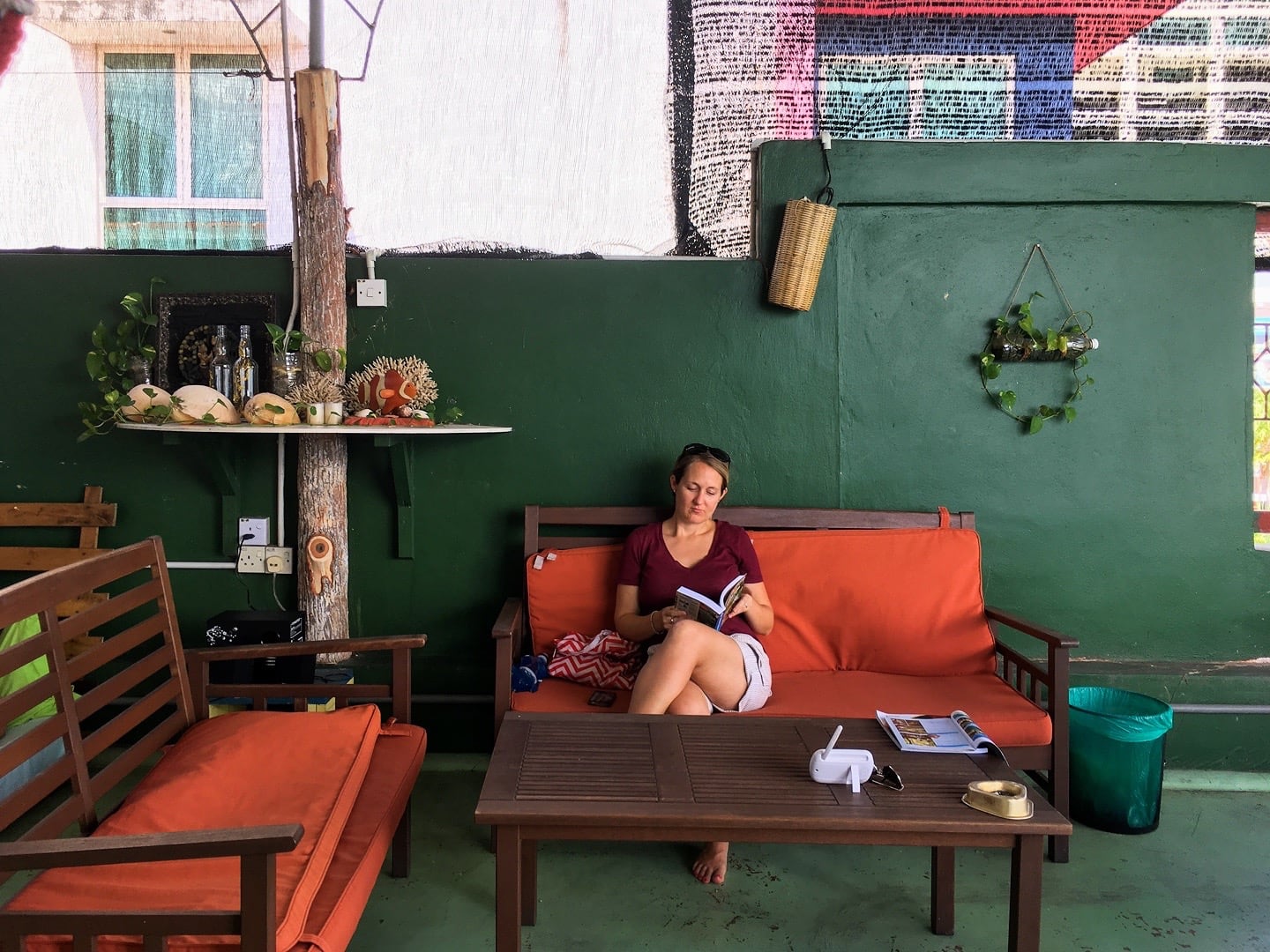 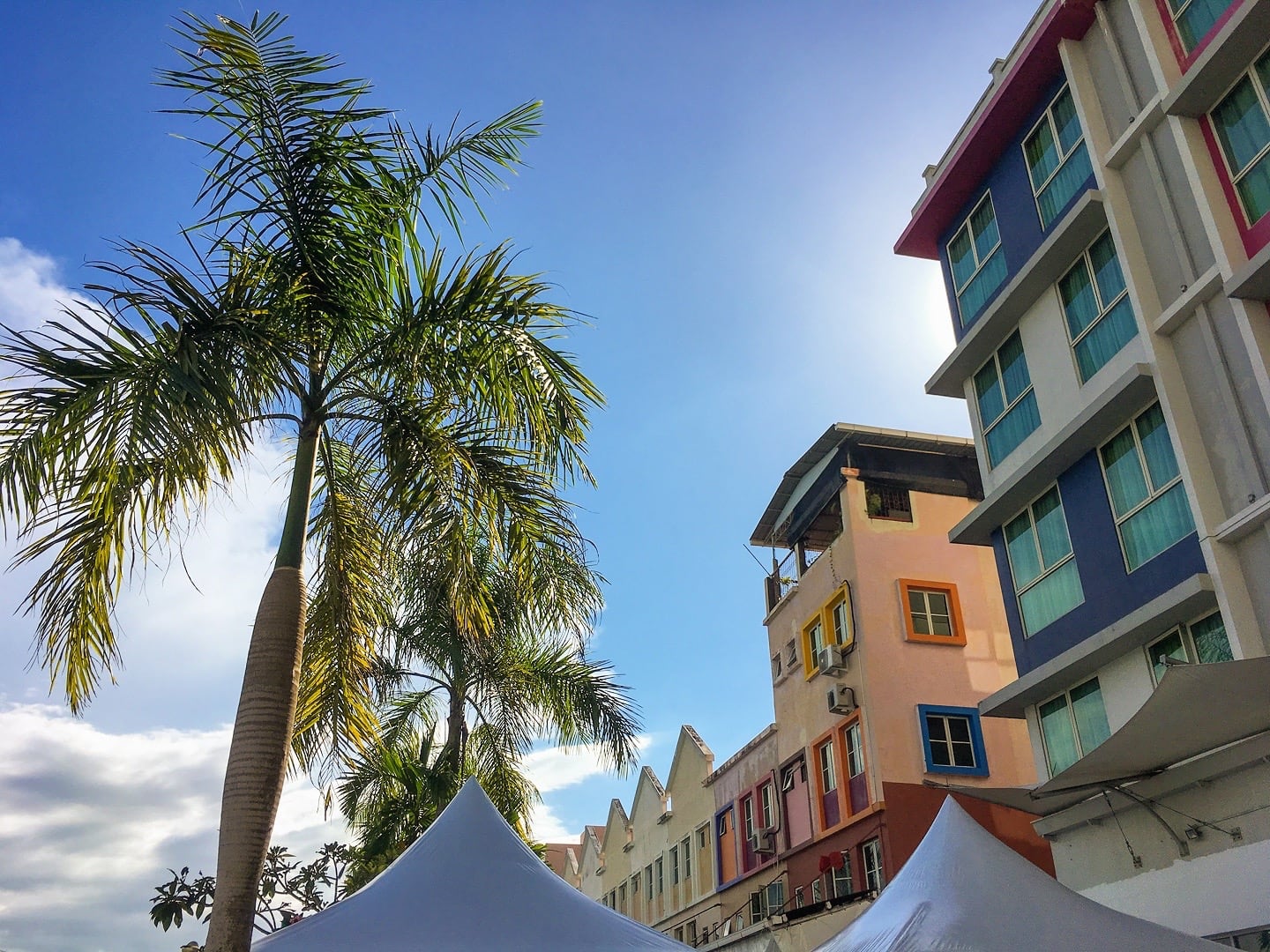 The sole of Lori’s Chacos had begun to separate back in Vientiane before our trip. They don’t really sell Chacos in Southeast Asia, and they’re Lori’s choice footwear outside of working hours, so we’re trying to make these last until we’re back in the U.S. again. Lori tried super glue, no luck. She then took them down the street to our neighborhood upholstery shop where they glued them back together them with vinyl sealant, which got her to Borneo. Harkening back to a similar situation a few years ago in Dar es Salaam, Lori—with the help of the staff at our hostel—found these guys in the local market who specialized in shoe repair and were able to get her back on her feet (literally) in a matter of minutes for a buck or two. 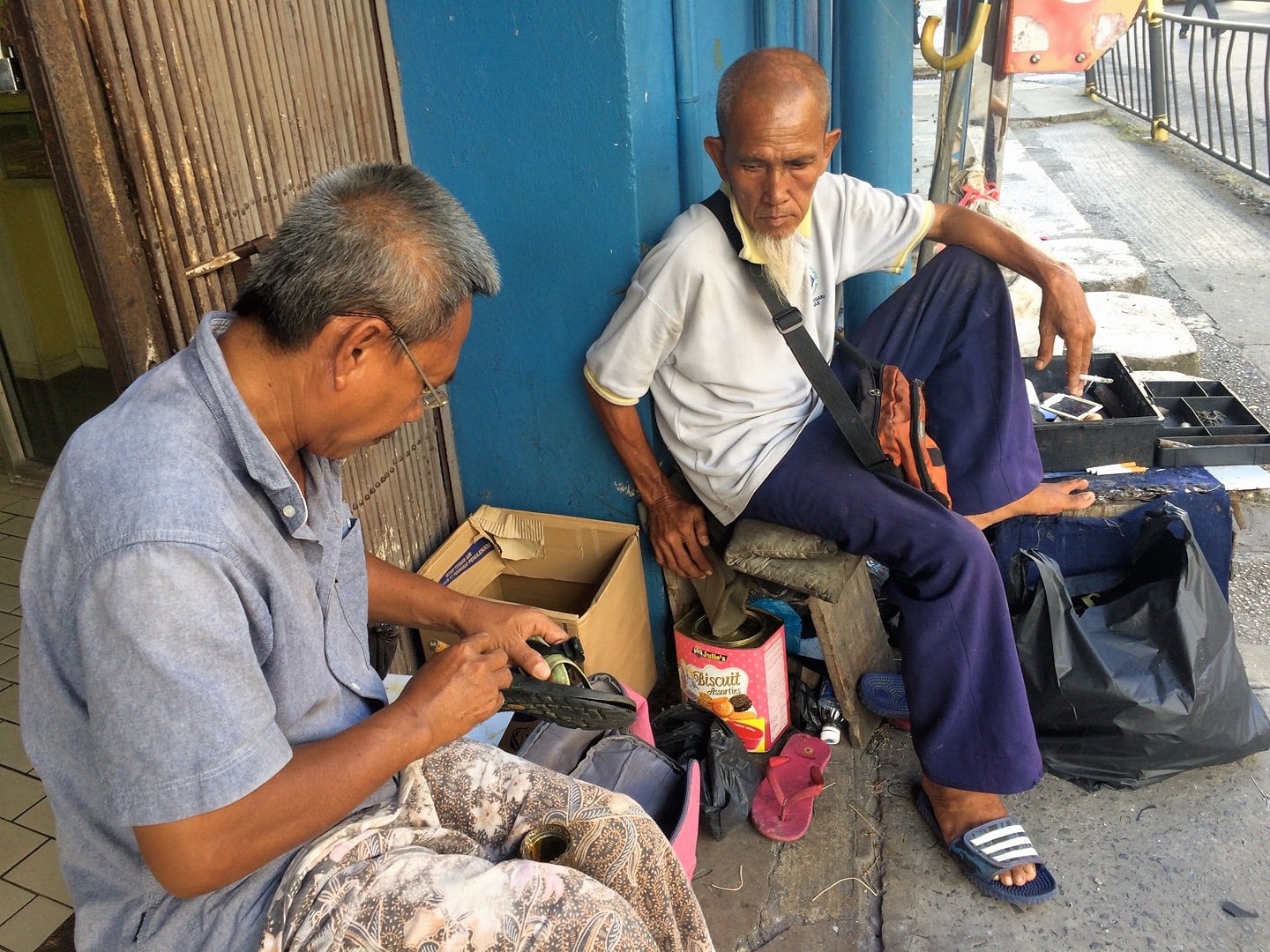 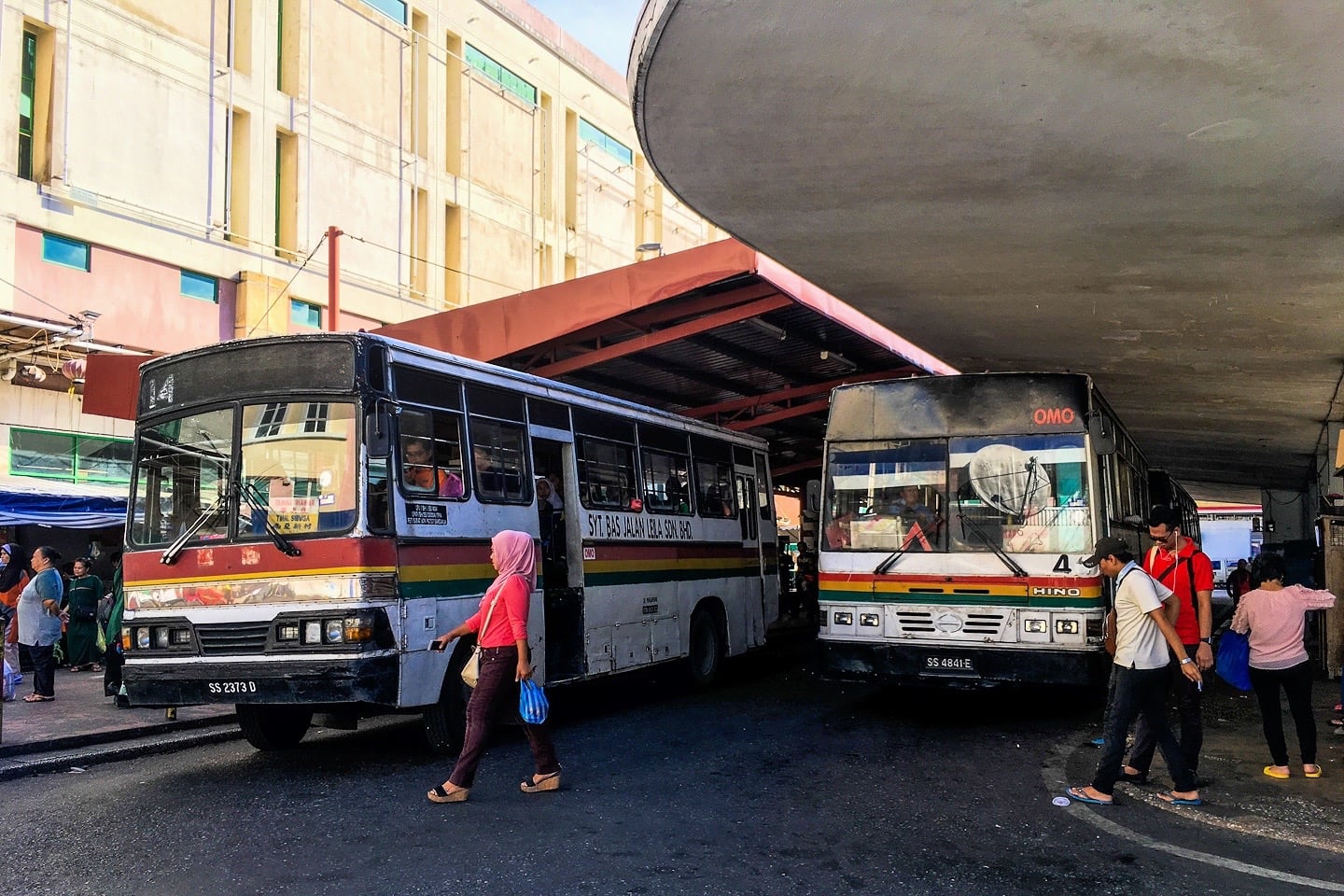 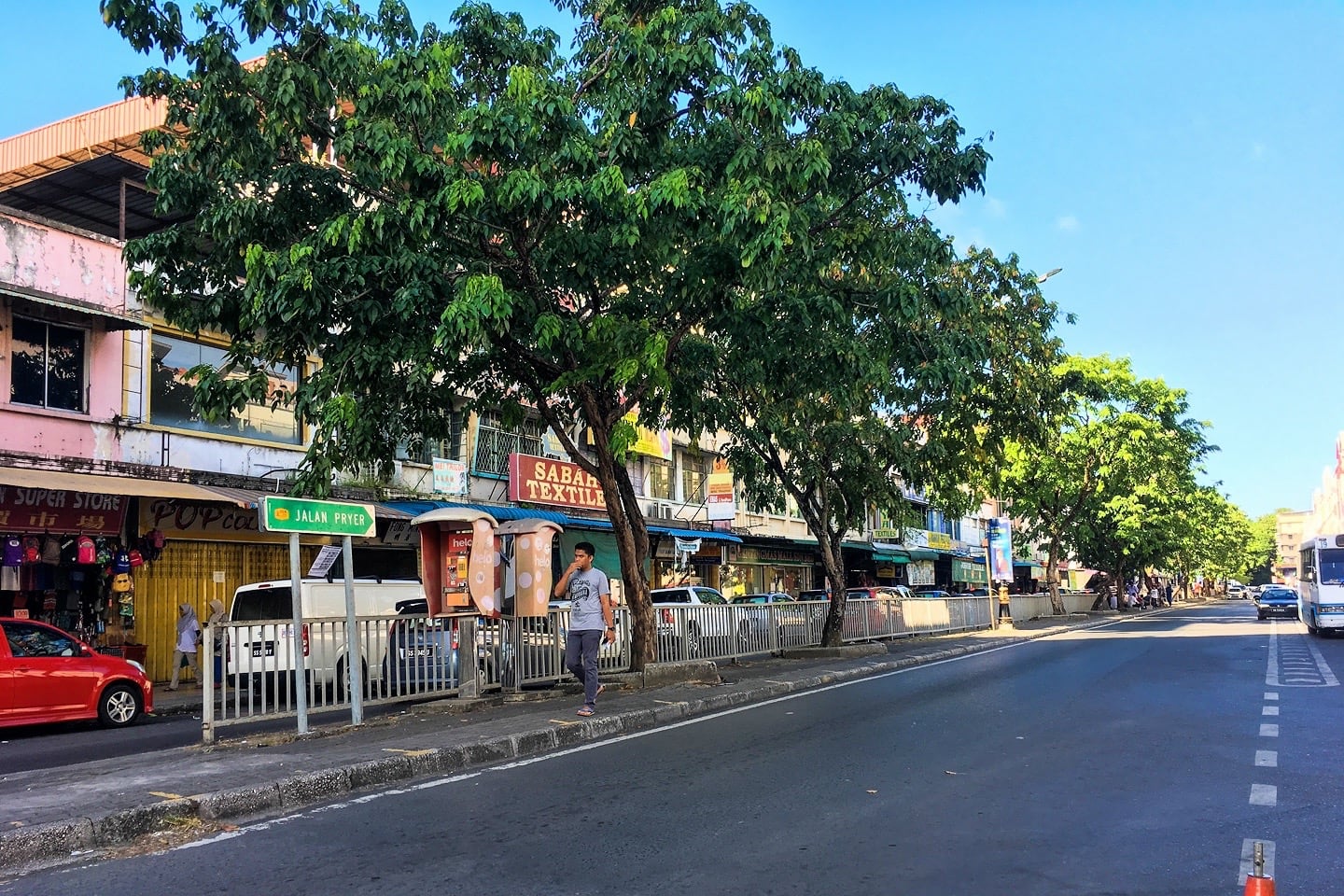 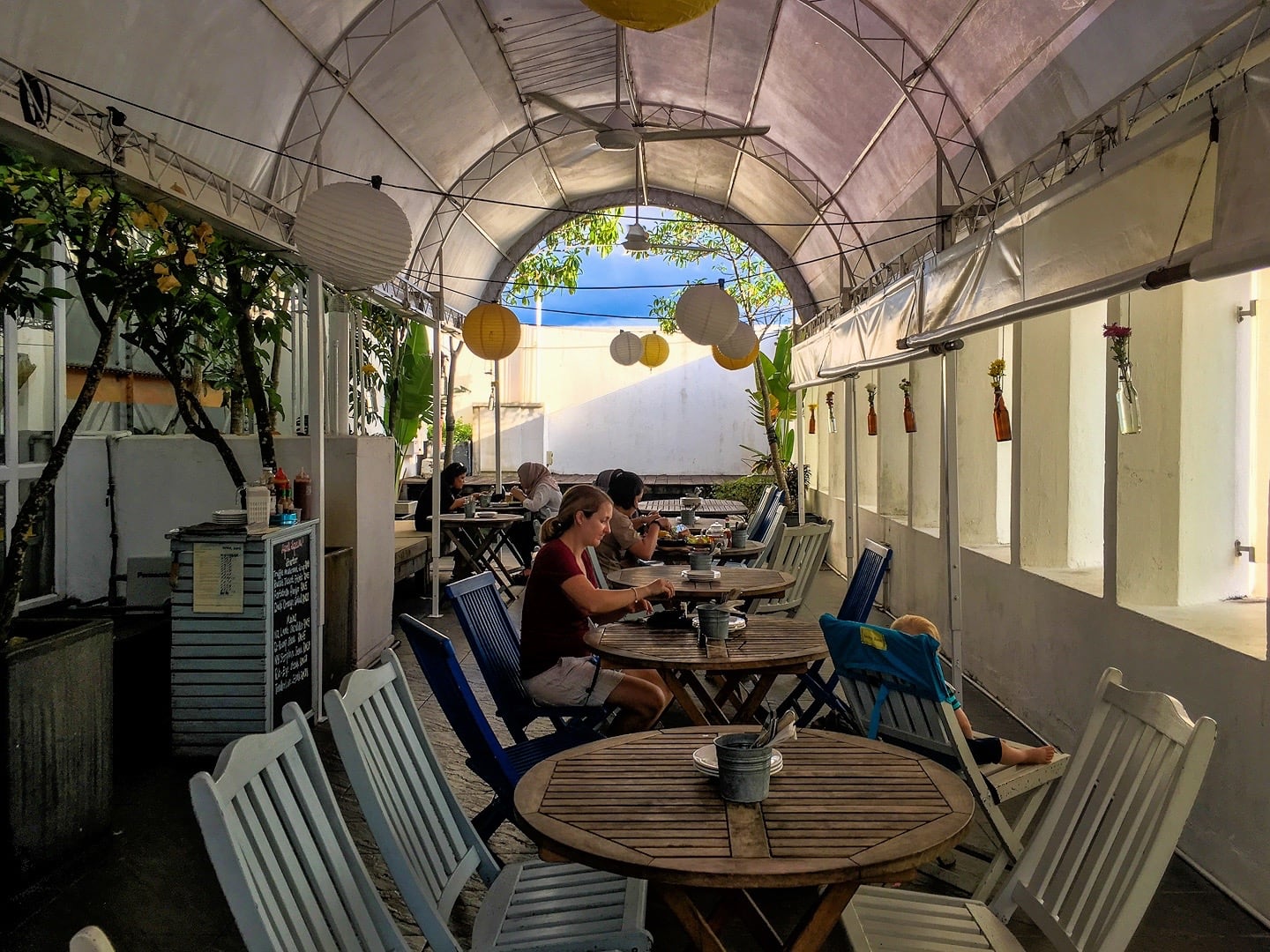 Lori had a surprise for me. She had read about Balin Rooftop Bistro that was supposed to have the best selection of beers and cocktails in town and one of the best views—two of my favorite features in a happy hour location in a new town. The beer selection left something to be desired, but the happy hour cocktail list was intriguing. Unfortunately (but not a complete surprise), the signature cocktail that I ordered required multiple substitutions that rendered the “smokey bourbon” low ball essentially devoid of any hint of smoke—still tasty, nonetheless—and perhaps more importantly—strong. 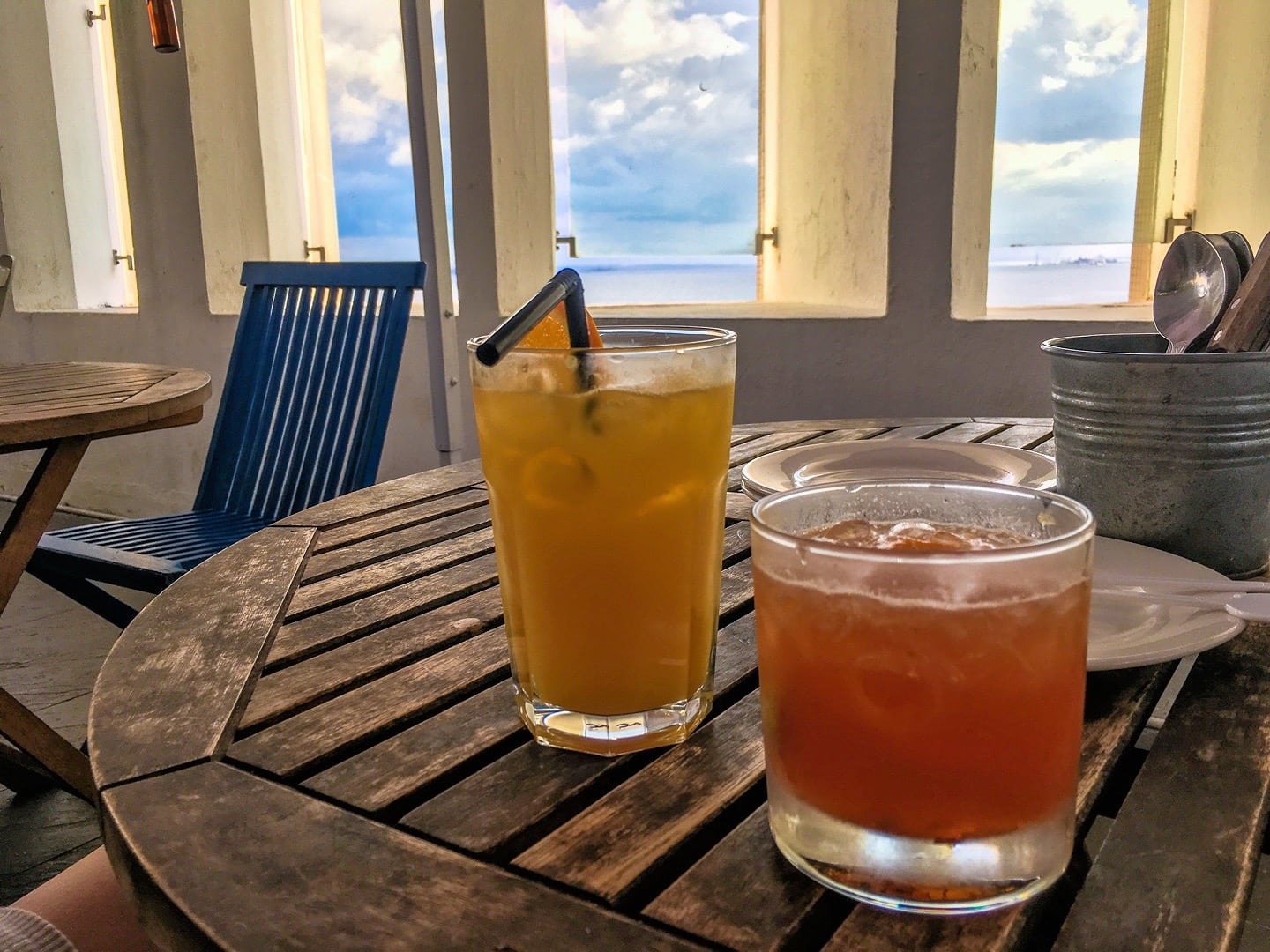 Lori also enjoyed her “mock”tail, though she had to ask multiple times to hold the alcohol. 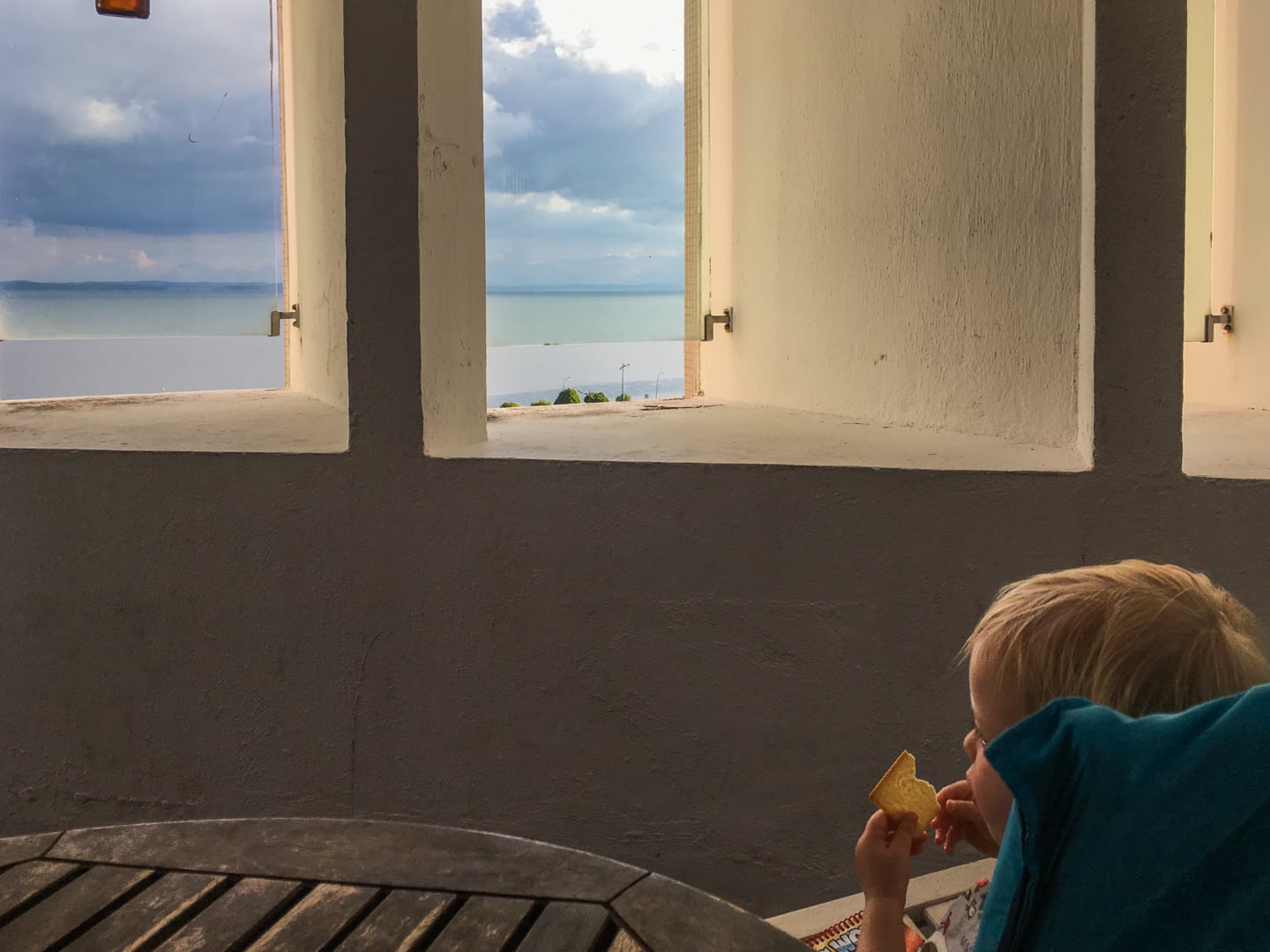 Of the three of us, Noe particularly enjoyed the view of the water and the boats.

Our view was nice, but the real view is one more level up. 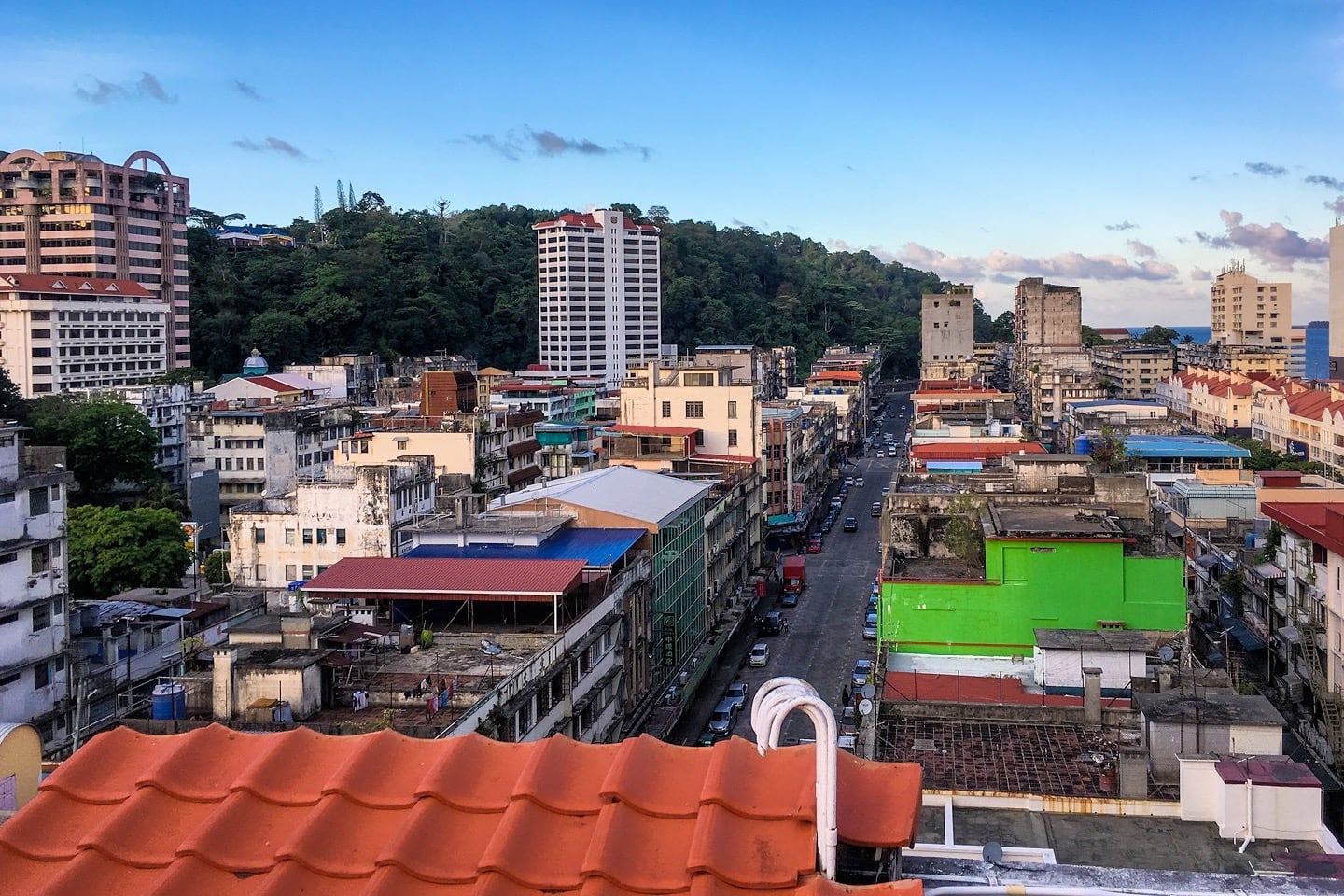 We opted to sit below in the heat of the day, and were amazed to discover that as soon as the sun had gotten a bit lower and temps had cooled a bit, the rooftop was suddenly packed! 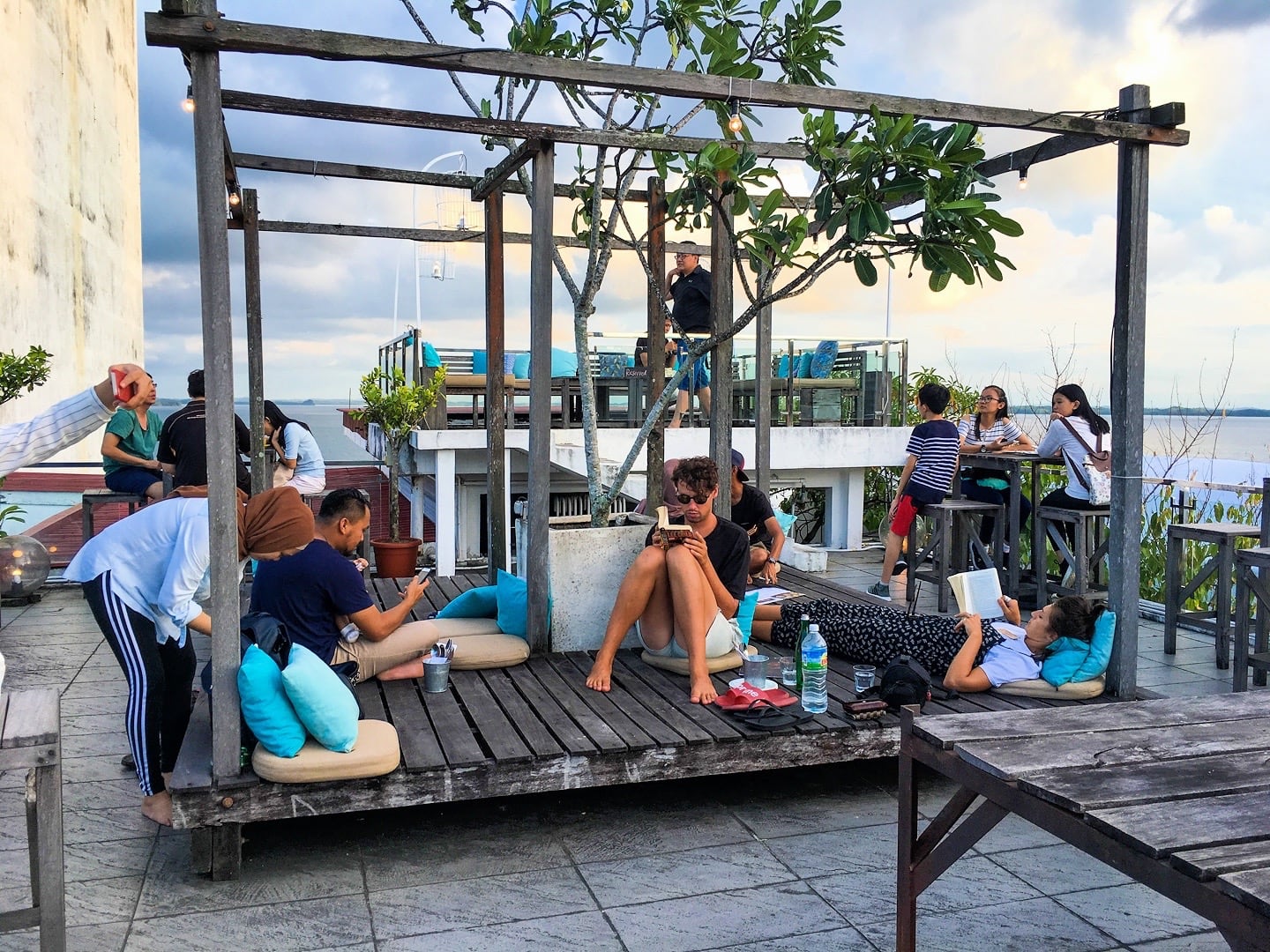 Rounding out our one and only night in Sandakan town, we had dinner in the city’s agreeable night market water front complex. There are a dozen seemingly-identical restaurants lined up along the promenade, but apparently not all are created equal. My Harbour blew the rest out of the water on TripAdvisor, so we thought we’d give it a try. We made up for our midday McLunch transgression with a delicious array of local specialties, and most importantly, won back the respect of our son, who devoured every last bite of Malay tastiness. 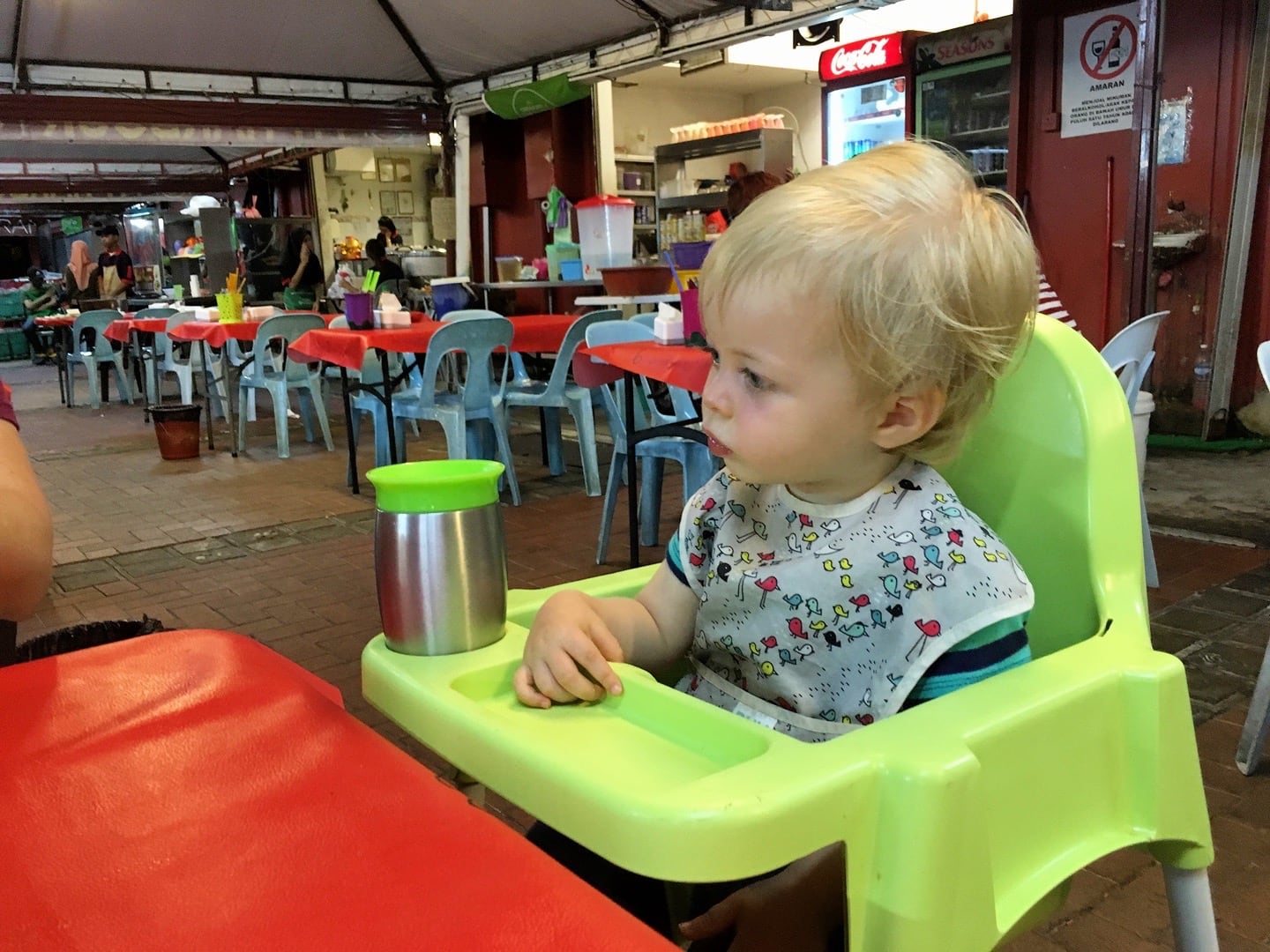 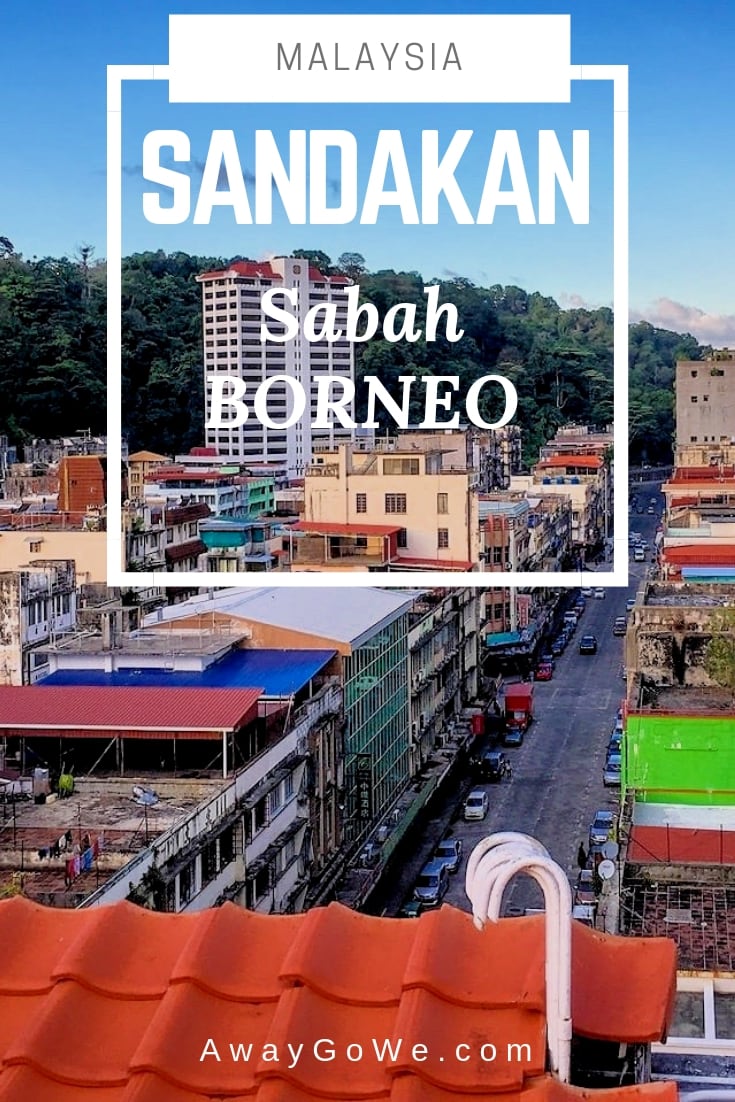 And I wonder where your son gets his appetite for local food?