We’re off to Sabah, on the Malaysia side of the island of Borneo! Last year, we opted to stay Laos-side to experience (i.e. endure) Lao New Year. This year, it’s beaches, baby!

Last year, we opted to stay Laos-side for Pi Mai (Lao New Year), taking an extended holiday weekend trip down to Khammouane province to retrace our 2012 motorbike adventure and explore some new areas.
b
We had heard a lot of mixed reviews regarding Pi Mai from other expats—how the whole country shuts down for a week (or two) and everybody pretty gets wet and wasted—how foreigners are often targets of the water fights that go on from midday to early in the morning for several days—and how crime and drunk driving accidents increase exponentially.

All this, of course, is always followed by the obligatory “but you’ve got to experience it at least once, of course.”

So we did, and that was enough for us.

Then…after a long weekend of dodging water canons and drunk drivers and giving our ear drums an excruciating work out in even the most remote villages, we returned home…only to find the party continuing in our neighborhood!

Apparently, our neighbors had all gone back to their familial homes (most people living in Vientiane did not grow up here) for the long holiday weekend as is customary, but then decided to do Pi Mai all over again the following week (while Lori was expected to report back to work and Noe and I were expected to try and get some semblance of sleep. Night after night, ear-plug-piercing party after party it went on and on and on.

That week, we vowed not to make the same mistake ever again, resolving to get the hell out of the entire Buddhist Songkran-celebrating area. No Laos, no Thailand, no Myanmar, no Cambodia.

By July, we had decided on a week in Bali during 2018’s Pi Mai (Lao New Year). We knew a number of other expats here who had been to Bali. It had been on our shortlist for a while and we had heard it was a great place to take toddlers. So Bali it was, and that’s where things stood…until late January.

After the bulk of our visitors left, we started to look in earnest into travel to Bali. Bali seemed nice enough, but I just wasn’t feeling it for some reason. EVERYONE in the expat community here goes to Bali. We know a number of friends back in the States who have been. It felt like…following a herd.

Lori and I have worked hard in our travels to get off the tourist trail and do and see different things than what the tour groups see. In addition, this was our first opportunity in the 19 months we’ve been living in Laos to visit a new country in the region. And Noe is finally old enough to enjoy a lot of it as well.

So…I began to research flights and destinations in the region other than Bali.

Looking at a map, it struck me. Borneo!

And best of all, we knew very few people who had been and no one we knew in Vientiane was headed there. Some of the best jungle trekking, mountain climbing, diving, and beaches in Southeast Asia! Much of it, untouched by mass tourism. Borneo felt like it could actually be not just a vacation, but an adventure.

But what about Noe? Was the Bornean jungle any place for a toddler? Would there be enough to entertain him? Would visiting such a large place (the third largest island in the world) require too much moving around?.

After a bit more research, I figured that if we focused on the northern tip of the island (Sabah), we could limit our movement by concentrating on a few key areas. Then, when we do need to move, the distances won’t be so far. The roads aren’t great, but flights are cheap in that part of Borneo.

I presented the idea to Lori. Initially, she wasn’t warm to the idea. We both wanted a real vacation, and Bali certainly could offer that. The whole Bali experience it seems is geared towards families. There are a ton of all-inclusive resorts with waterparks, zoos, and activities for kids, plus Bali is apparently known for their “kid’s clubs” that many of the resorts offer. Which, I guess is why so many parents we know go there.

But it just isn’t our scene. We generally wouldn’t do that sort of thing in the States. Why would we do it here? It all sounded so Sandals resort to me. Is that what having kids does to you?

Regardless, I kept my opinions about Bali to myself, and let Lori have a few days to mull over Borneo. And sure enough,  she echoed the same sentiments and opted for Borneo. There are many reasons I married this woman, but one of the big ones is Lori’s not one to take the comfortable option just because it’s the easy one. There are lots of reasons why we do what we do and make the decisions we make, and comfort and ease generally aren’t two of them.

So, we’re off to Malaysia! Borneo is actually made up of three countries: Malaysia, Brunei, and Indonesia, but we’re choosing to focus on the Sabah region of Malaysia this time, with a couple of days in Kuala Lumpur.

After that was settled, I had just one last suggestion. How about we make it two weeks instead of one? This is, after all, our first real non-work vacation with just the three of us…and perhaps our last with just the three of us. Lori already had three days off of work due to the holiday. And, due to her impending maternity leave (we had just learned that Baby #2 was on the way), we knew she’d have some spare days of vacation left over on her contract. It was an easy sell.

As things stand right now, the plan is to spend a couple of days exploring Kuala Lumpur before flying to Semporna (via Kota Kinabalu) where I’ll be getting my feet wet again diving world-renowned Sipadan while Lori and Noe have some much-anticipated beach time. Then into the jungle to see orangutans and do some jungle trekking, before rounding out our two weeks in Borneo relaxing for four days at a basic and remote beach resort on the west coast.

It’s the farthest south we’ve been in Asia so far and a brand new country for us, so we’re pretty excited about that. 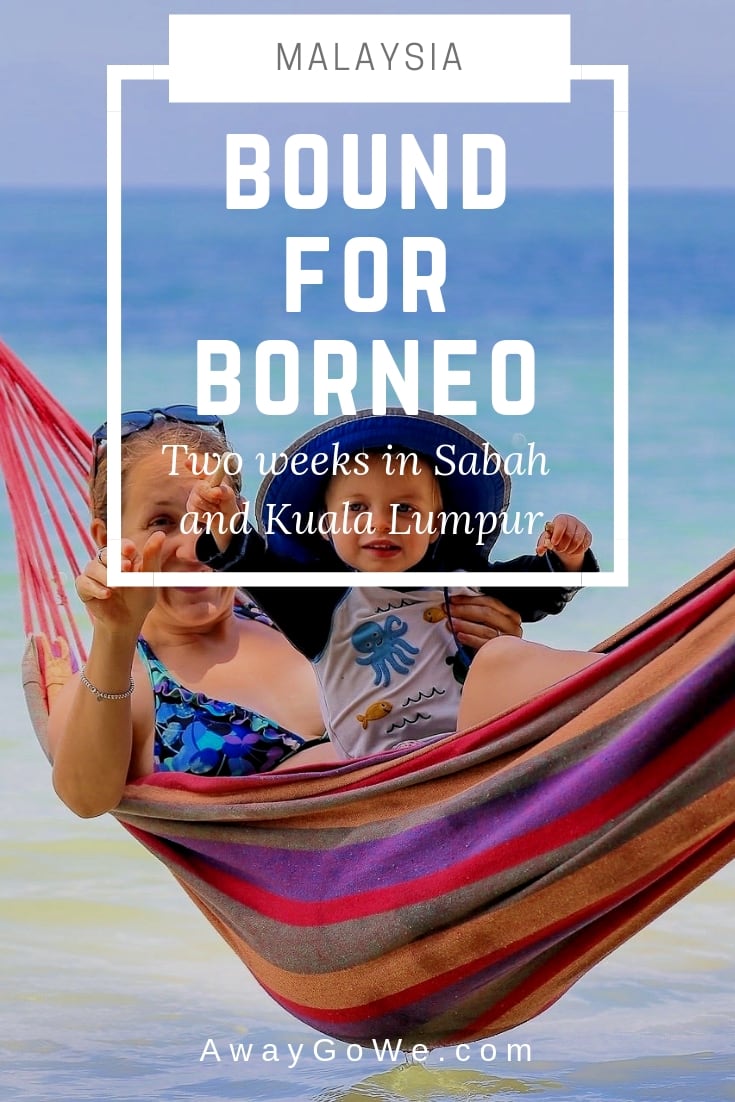 A Bird Paradise for sure, amazing, fabulous !

Hello traveling Baxter’s ! Truly enjoyed the pictures of the sights and of you Three ! You all look so very well and happy, I am always amazed how many more beautiful places there are and so interesting, you seem to find them all, wow !

Thank you for sharing all your travels with us !!! Noe seems to change a bit with every blog, his expressions are those of a little boy now rather then a baby. I am sure he will be a great big bro !

Thank you! There’s so much of the world to explore; we are glad to get to share these adventures with Noe…and our faithful blog followers! 🙂