Who says there aren’t any hiking trails around Vientiane? Today, we’re exploring a little-known corner of the area, with a unique coffee shop and miles of semi-shaded nature trails.

While the mountainous region to the north of Vientiane Prefecture is known by travelers and locals for the countless hiking trails on offer, low-lying, brushy, and flat Vientiane is most certainly not.

Over the past 2.5 years, Lori and I have been hard pressed to find anything resembling a proper nature hike within an hour’s drive of the capital.

Our search has so far come up with a piecemeal hike through degraded forests in the Phou Phanang natural reserve, and a few miles of trails around Nam Lik Eco Lodge a bit farther afield to the north.

Which is why we were excited to hear about Wealth Coffee from some of Lori’s colleagues. 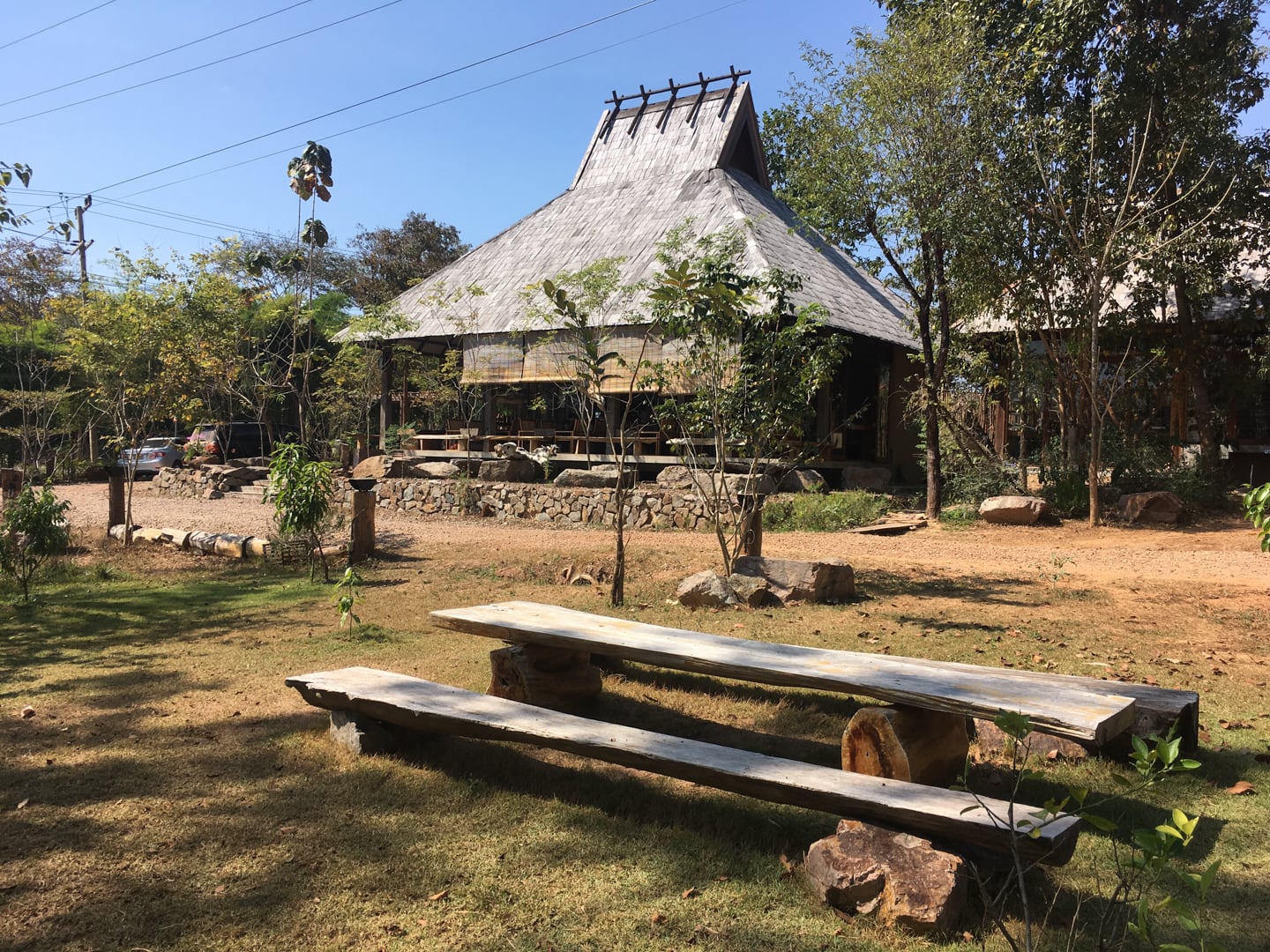 It’s always a good day when we have a reason to take the nameless road that peels off of Road 13 just past the airport and heads west along the Mekong. It’s a pleasant and scenic drive, but there isn’t generally a lot out here to make it worth the petrol.

We’ve been out here two other times, once with one of Lori’s co-workers while a friend from the U.S. was visiting, and the other time to tour an organic farm.

We’ve been meaning to return for lunch on the river in one of a mattering of local lunch huts, but so far haven’t managed that.

Now, we can add Wealth Coffee to the shortlist of day trips this direction.

For one, it’s out seemingly in the middle of nowhere (a 40 minute drive from the city center). It sits on a large tract of land that appears to have been set aside for the purposes of being out in nature.

There’s not a lot of information online about Wealth Coffee or its trails, and if I hadn’t been cattle-rustling two little boys I may have been inclined to enquire with the staff in Lao-glish.

What I can say is that the coffee shop, itself, is a first-rate operation (no instant coffee in a plastic bag here), serving locally grown Lao coffee, along with an extensive menu of Lao and Thai food (with a handful of Western offerings).

While we didn’t sample any of the food or coffee on offer this time (we had eaten in town and I had caffeinated myself before/during the 40 minute drive), we can vouch for the iced milk tea, which was delicious. 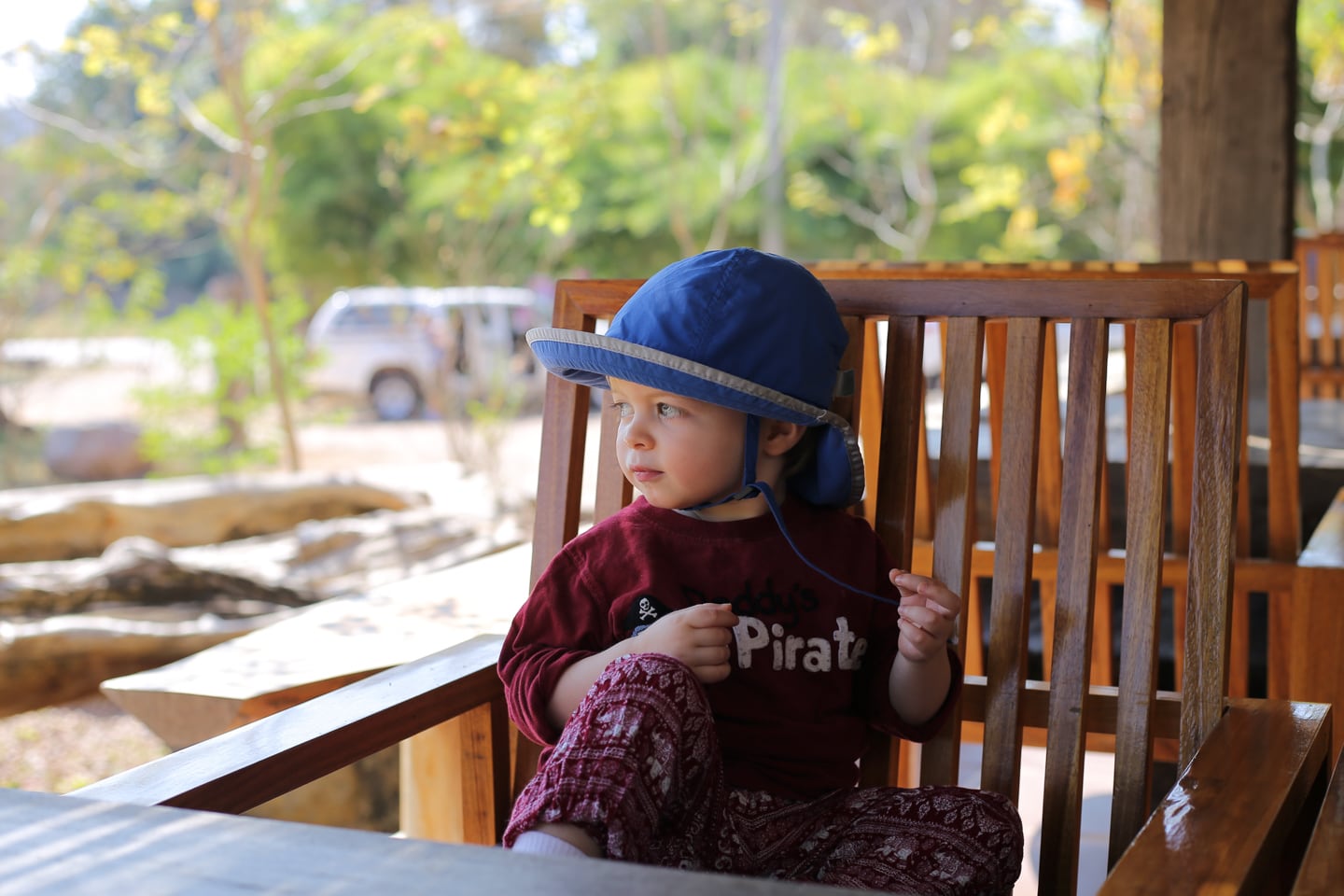 As for the trails, well, that aspect was something of an adventure — not in a getting-lost-on-the-mountain-when-the-weather-turns sort of adventure. But that fact that we knew so little, and that there were no maps or markings for trails made things interesting.

Essentially, we showed up at the coffee shop marked on Google maps, sat and had an iced beverage, and made our way to the plank of wood with the walking person and bicyclist. 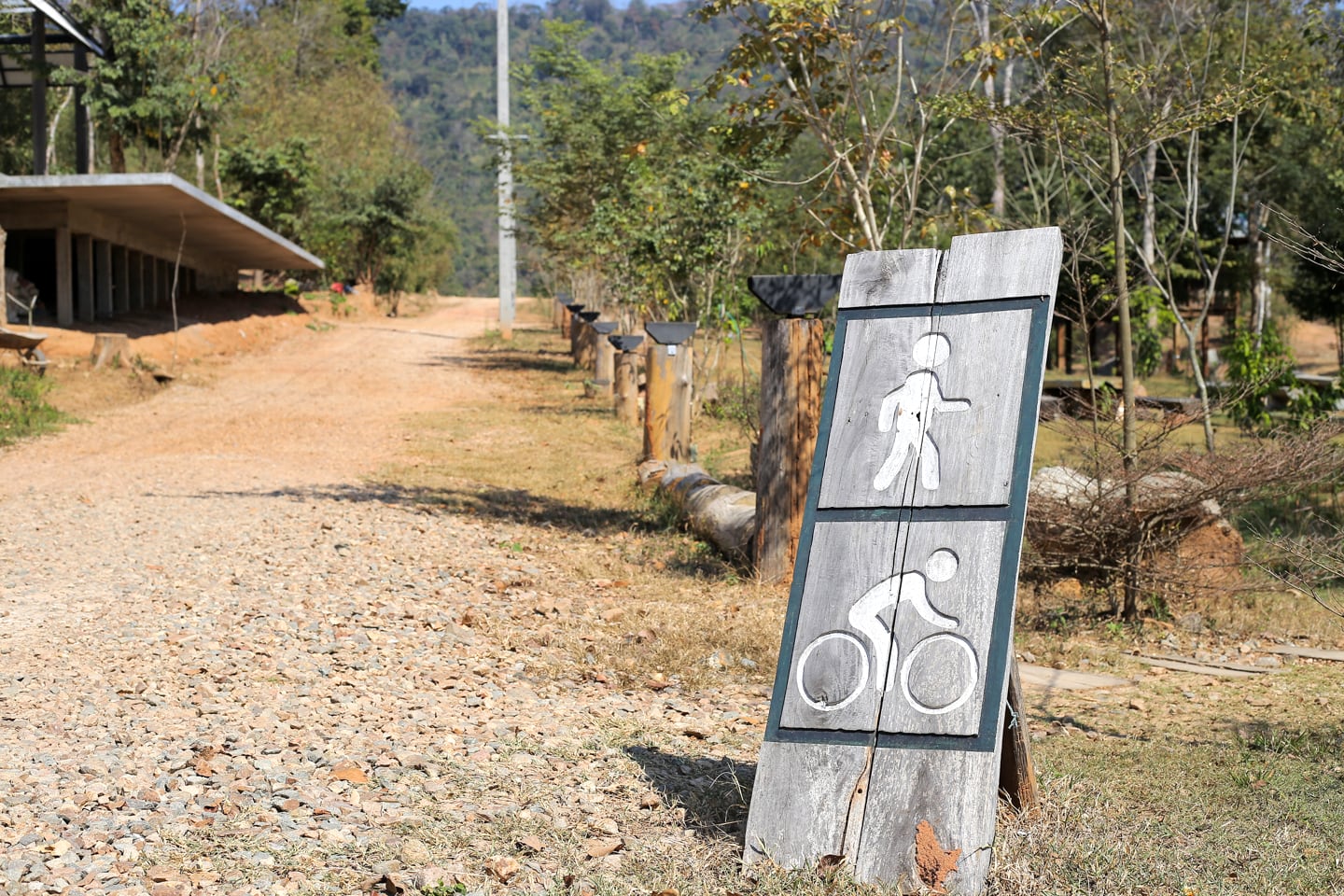 Even then it wasn’t exactly clear where to go. I thought the dirt track on the left looked like a good bet. Lori thought the stone-lined path to the right beginning at the sign was a better bet. So, having been married for long enough to know better…we followed the path to the right… 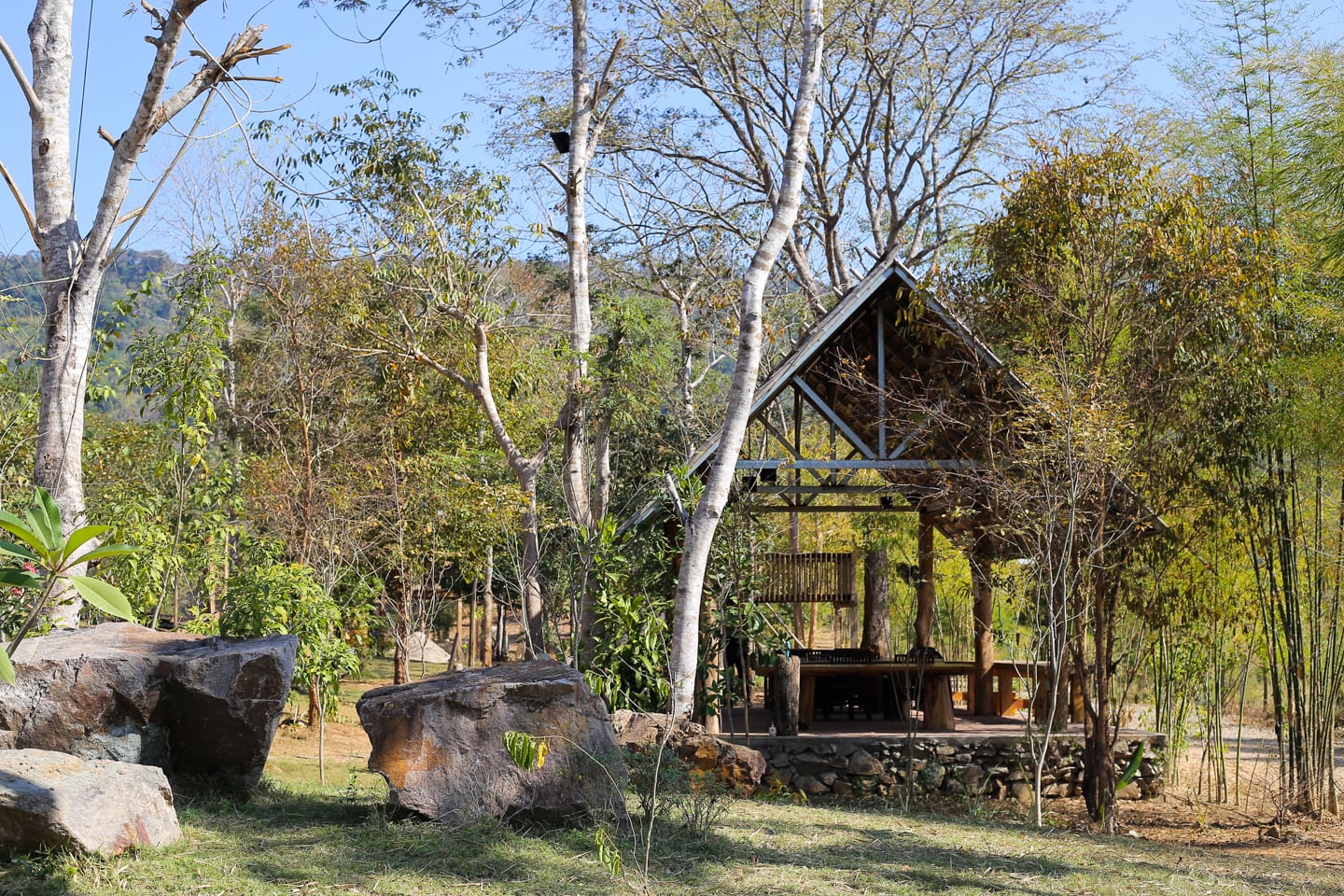 …which led us to the playground. And, a dead end. So, we ended up back on the dirt track to the left. And that’s all I’m going to say about that.

The outing was more of an hour-long meandering than a hike, considering that the property is a large, relatively open area and there are several paths you could choose to follow.

We initially chose to hug what appeared to be the western perimeter of the property and essentially traced the perimeter around until we ended up back where we started.

It’s fair to say it wasn’t the most spectacular hike we’ve ever been on, but this fairly well-maintained property alternating between pasture, small wooded groves, and open fields offers an outing in nature that’s hard to come by in the region.

Above, I’ve included our GPS tracks from the MapMyHike app. Our path in red is superimposed over satellite imagery of the property. You can zoom in and explore the property by clicking above (which will take you to Google maps).

Please bear in mind that there are a lot more internal paths than what’s in red, above, as that was only our track.

A Quick Note on Kiddos

I have the questionable honor of carrying the toddler on my back in the mid-morning heat. We’re hoping there will be some nice stretches that he can walk himself, but the first portion is pretty uneven, which means I’ll be getting a fair workout despite the fairly level path.

A quick aside regarding gear. I’ve been pretty pleased with the new Ergo we recently purchased to carry Noe.

For the first two years, we had an Ergobaby 360 Cool Air Mesh, which has been perfect for the climate and our active lifestyle in a developing country. When Riley was born, we knew he’d ultimately take over the old Ergo and we’d get Noe something new.

We originally planned on getting a carrier designed specifically for toddlers, but after looking at everything on the market (literally, everything) none quite seemed to the fit the bill.

Then we heard that Ergobaby came out with a newly designed Omni 360 Cool Air Mesh carrier which had the added advantage of crossing the straps in the back for added support and being generally more customizable, rigid, and streamlined overall.

We gave it a whirl and it’s been perfect for carrying around Noe. We’ll do a full review on it in the future, so you can look forward to that.

(By the way, if you happen to use the Amazon links above to get a carrier (or anything else for that matter), it helps support our work on this blog.)

Due to the semi-exposed nature of the hike (and that we’re in the tropics) we brought along more than enough water for the three of us (Riley only drinks mom’s milk right now for hydration).

Since I have a monkey on my back, Lori’s the one carrying the hydration pack on hers (and the baby on the front, which feels like carrying a finch around in your front pocket compared to Noe these days.

We’ve got snacks, we’ve got bandaids, burp rags, and a couple of UV-blocking umbrellas for the sun (we’ve got this one, which is compact, lightweight, and all around awesome).

Oh, and Noe’s sporting a lightweight, long-sleeve shirt, harem pants, socks, shoes, sunhat and high SPF sunscreen, all in the name of sun protection (when in Southeast Asia…).

Now, on with the hike! 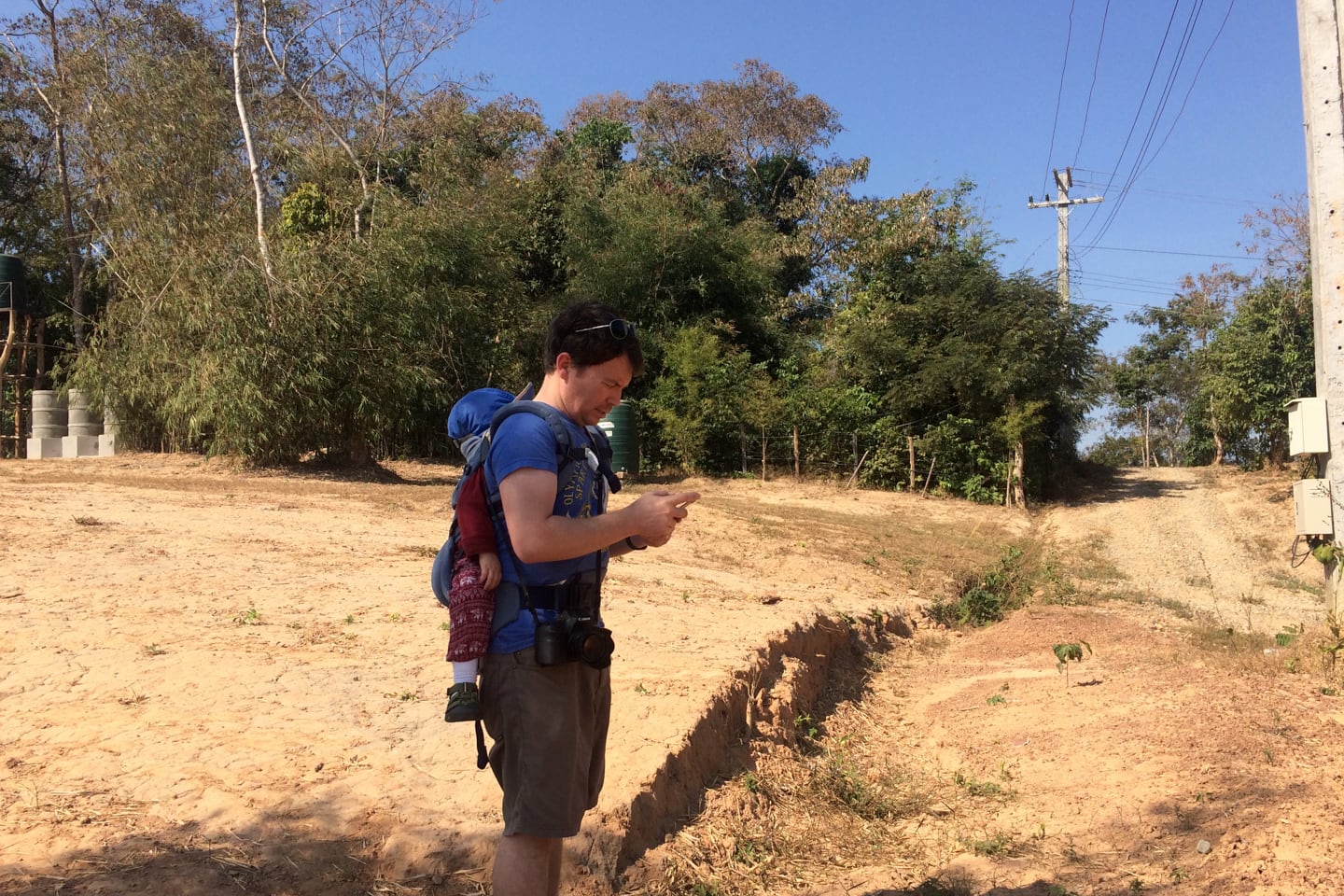 Right out the gate, we knew this ‘hike’ was going to be interesting.

After deciphering the only informational placard on the property (which had nothing more than a bicycle and walking person), we walked a long, exposed path for about five minutes before arriving at a junction of five paths.

In retrospect, we realized that we could have taken any one of the paths and not ventured off the property. However, we decided to take a sharp left, tracing the boundary fence of the property, which ended up having the added advantage of ensuring we saw (what we think was) most of the reserve.

In the pic above, I’m trying to decipher satellite imagery to get a sense of the lay of the land. But really, this property is made for meandering, and that’s really how it should be approached. 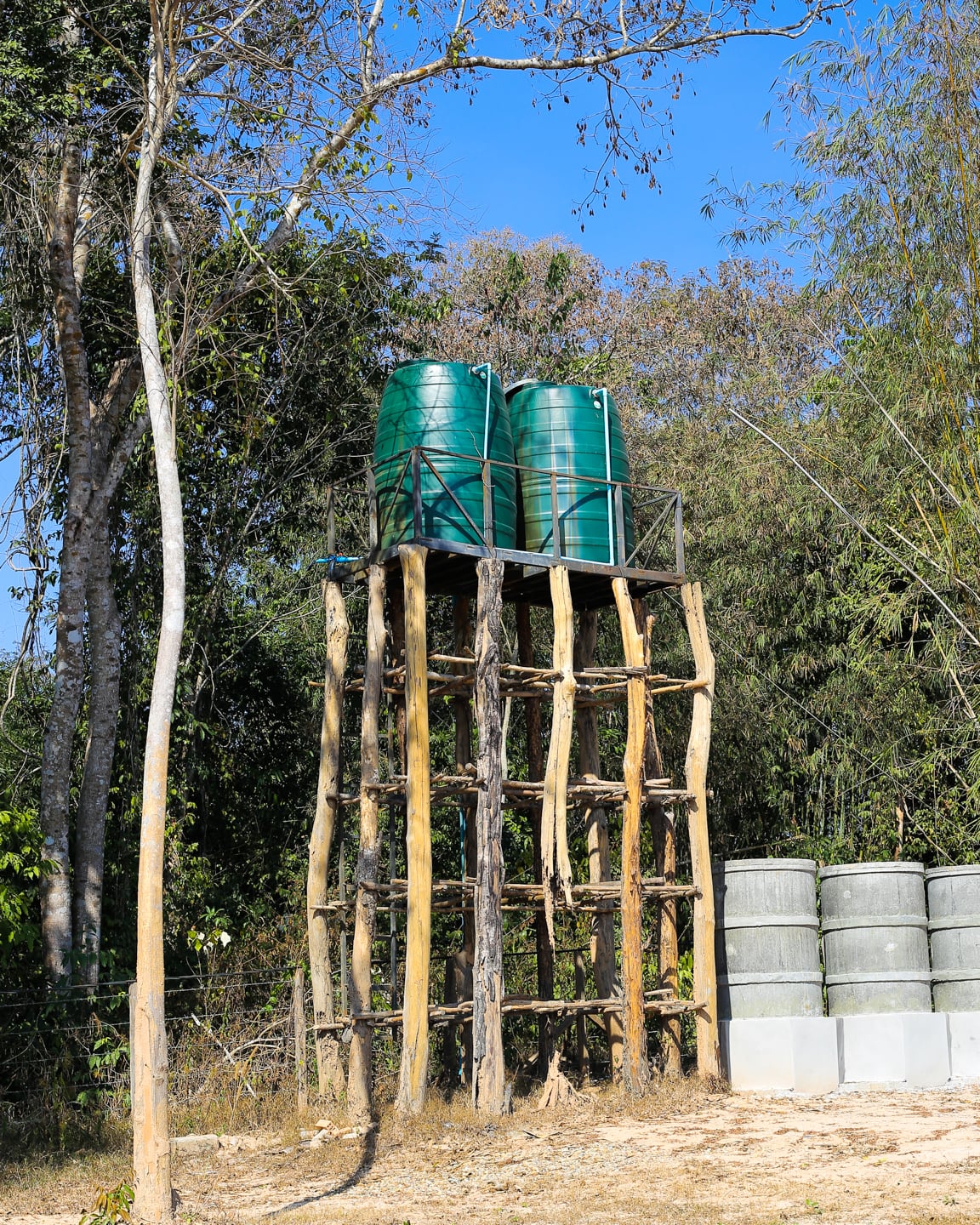 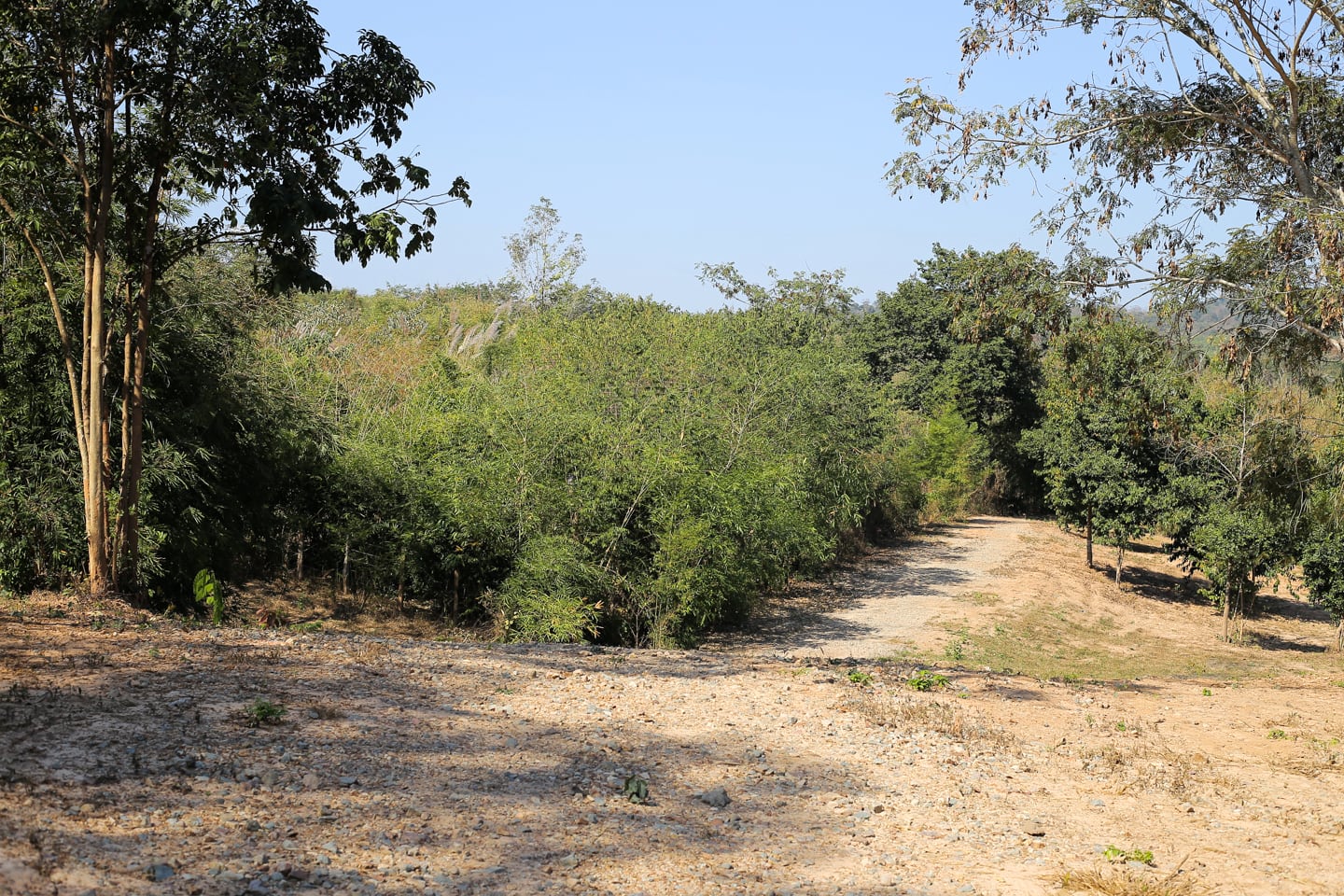 We were introduced to this hidden hiking gem by colleagues of Lori who come up here to do trail running.

Knowing what I know now, I’d be fairly confident that I’d get a satisfying workout in if I were to do the same. If I were to come out here for the first time hoping to do some trail running not knowing the lay of the land, I think I’d find it a bit frustrating not knowing if I’m looking at a mile run or 10 mile run, a loop, an out-and-back, or finding myself in an area I’m really not meant to be in.

If you’re thinking of coming out here for a jog or mountain bike ride, hopefully you’ll find our map (above) helpful in some way for planning your first visit. 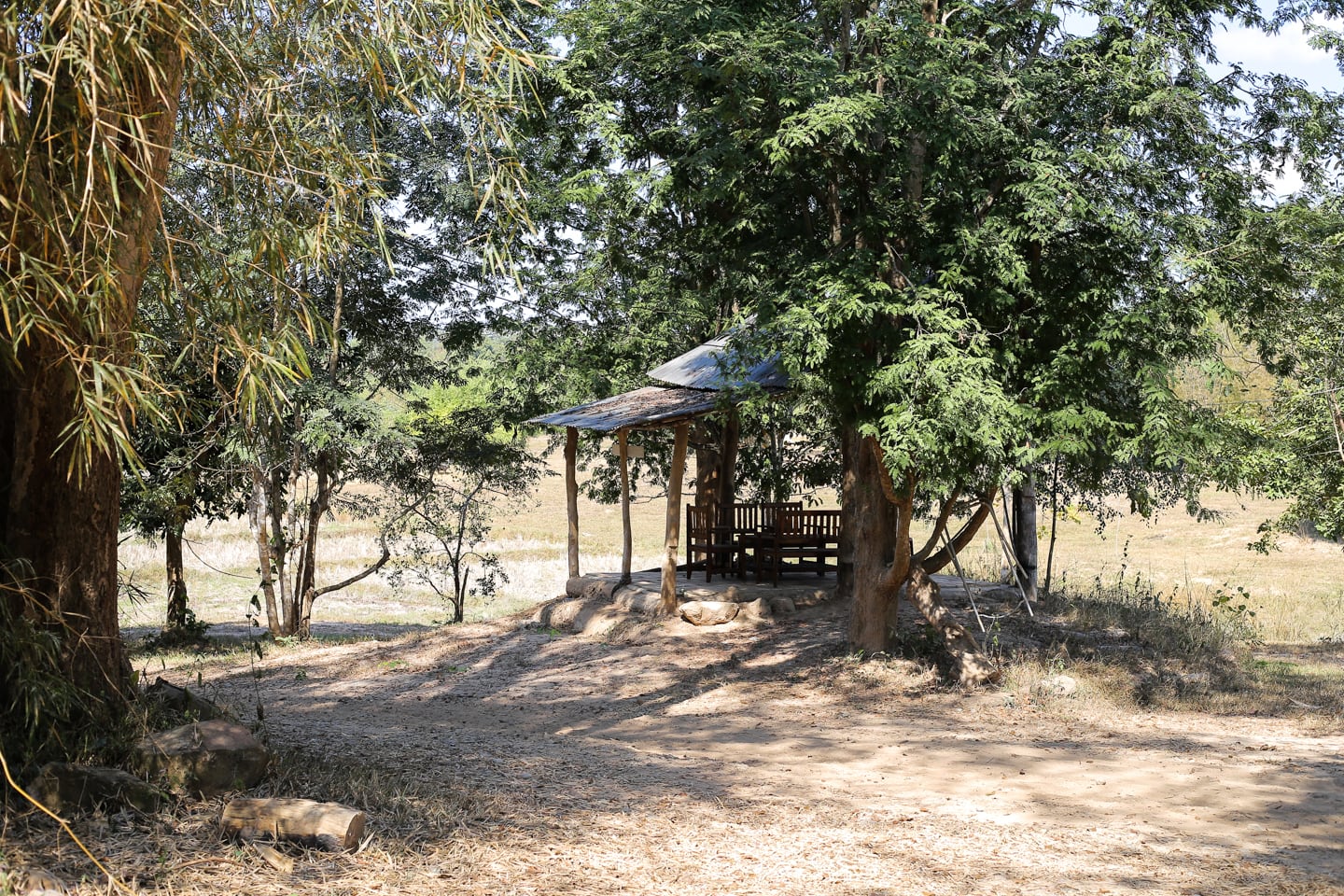 A short while later, we arrived at what appeared to be a picnic shelter in a grove of trees, looking out onto a serene pasture. 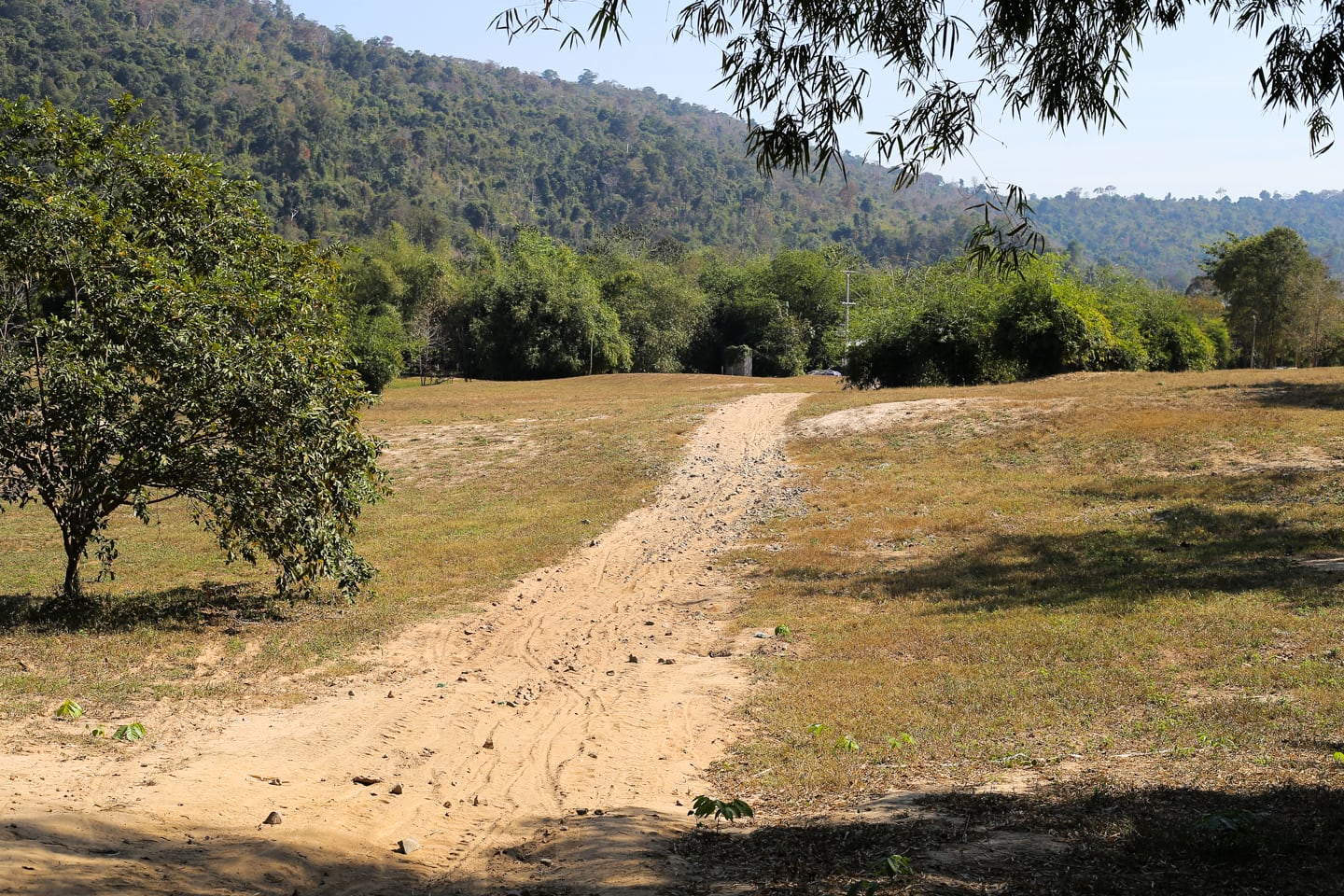 Much of the path is exposed, with pockets of shade as you wind through small groves.

I’d imagine this hike would be ideal just after sunrise or just before sunset, though the long drive from town and lack of lodging options in the area make doing so more challenging. 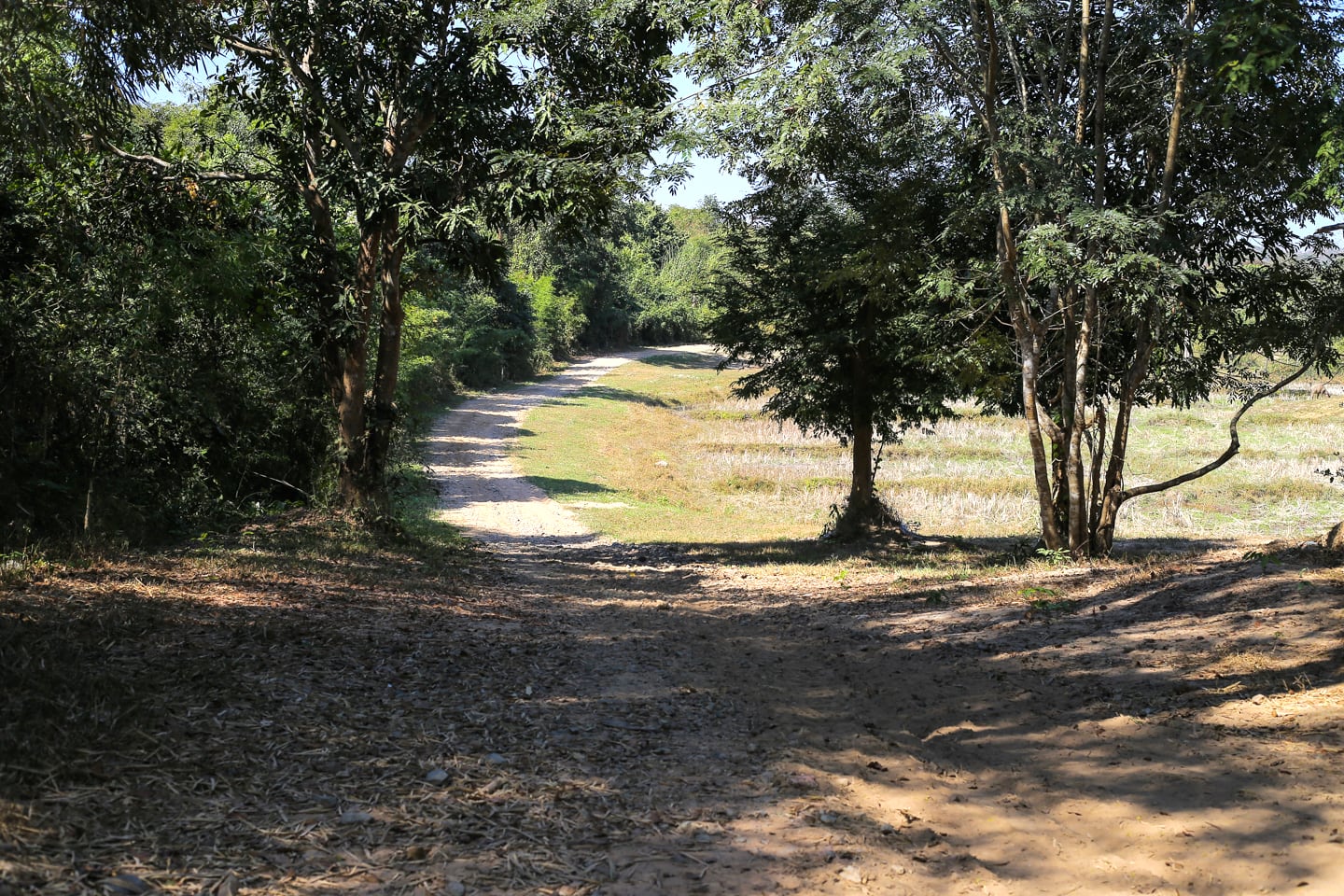 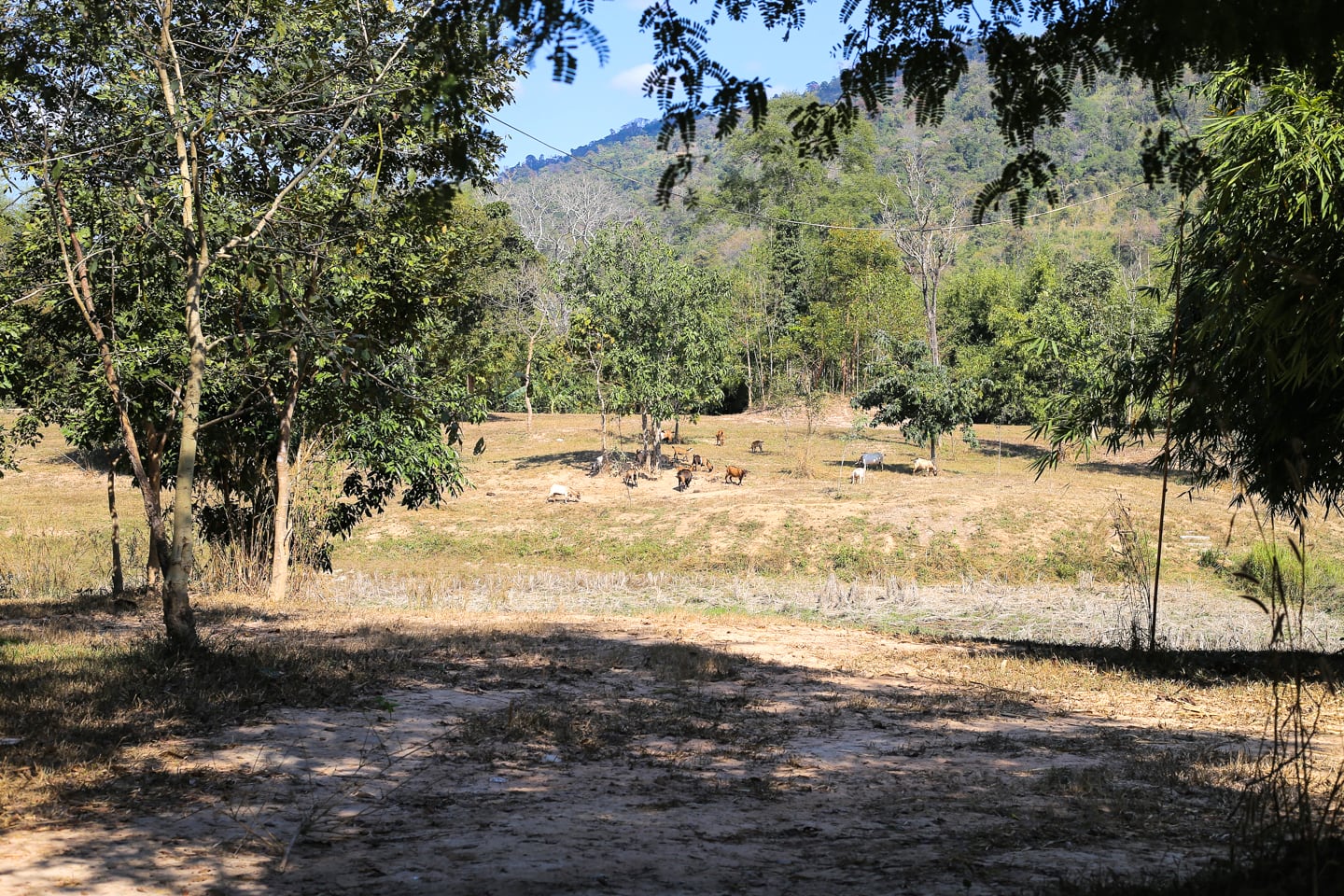 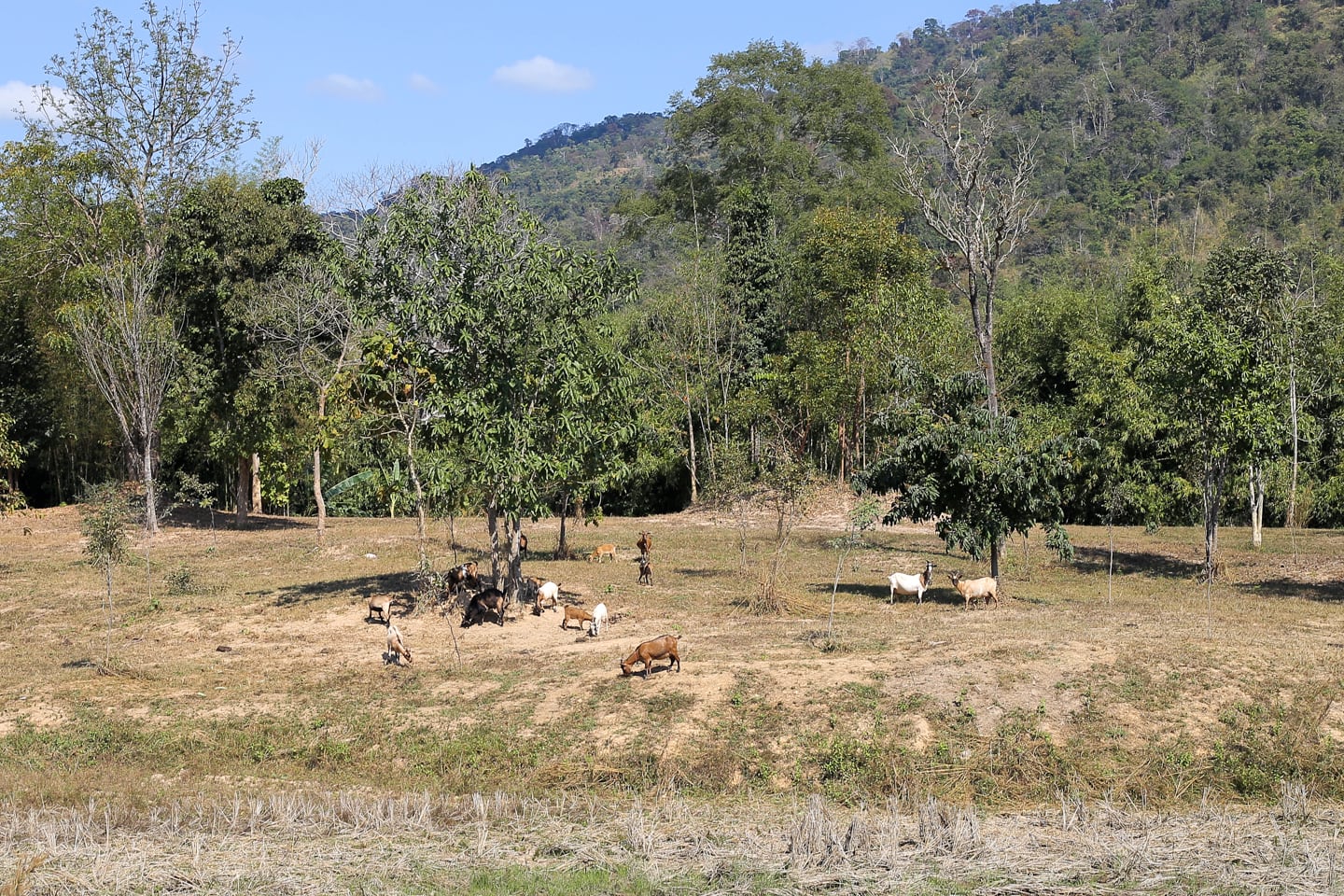 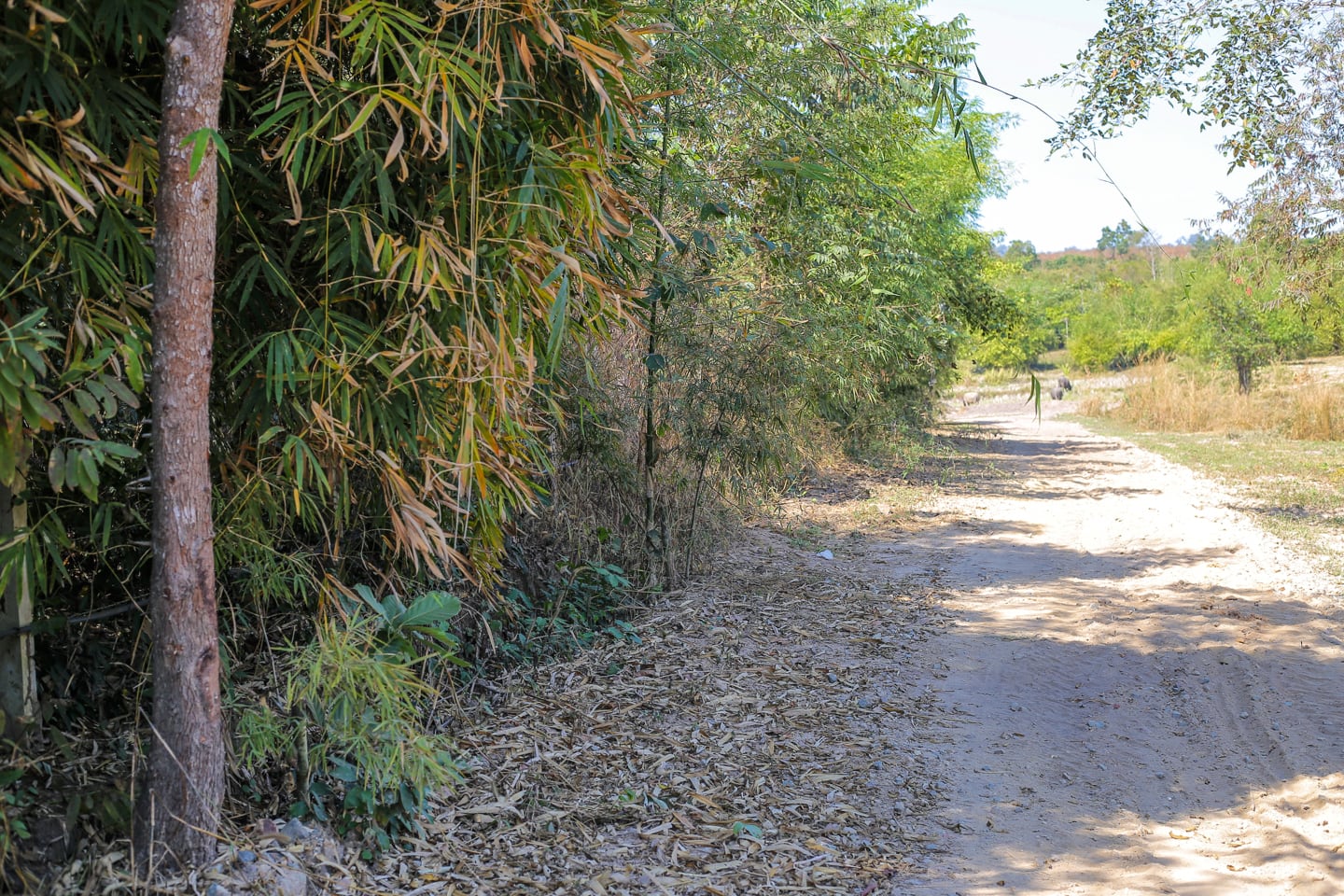 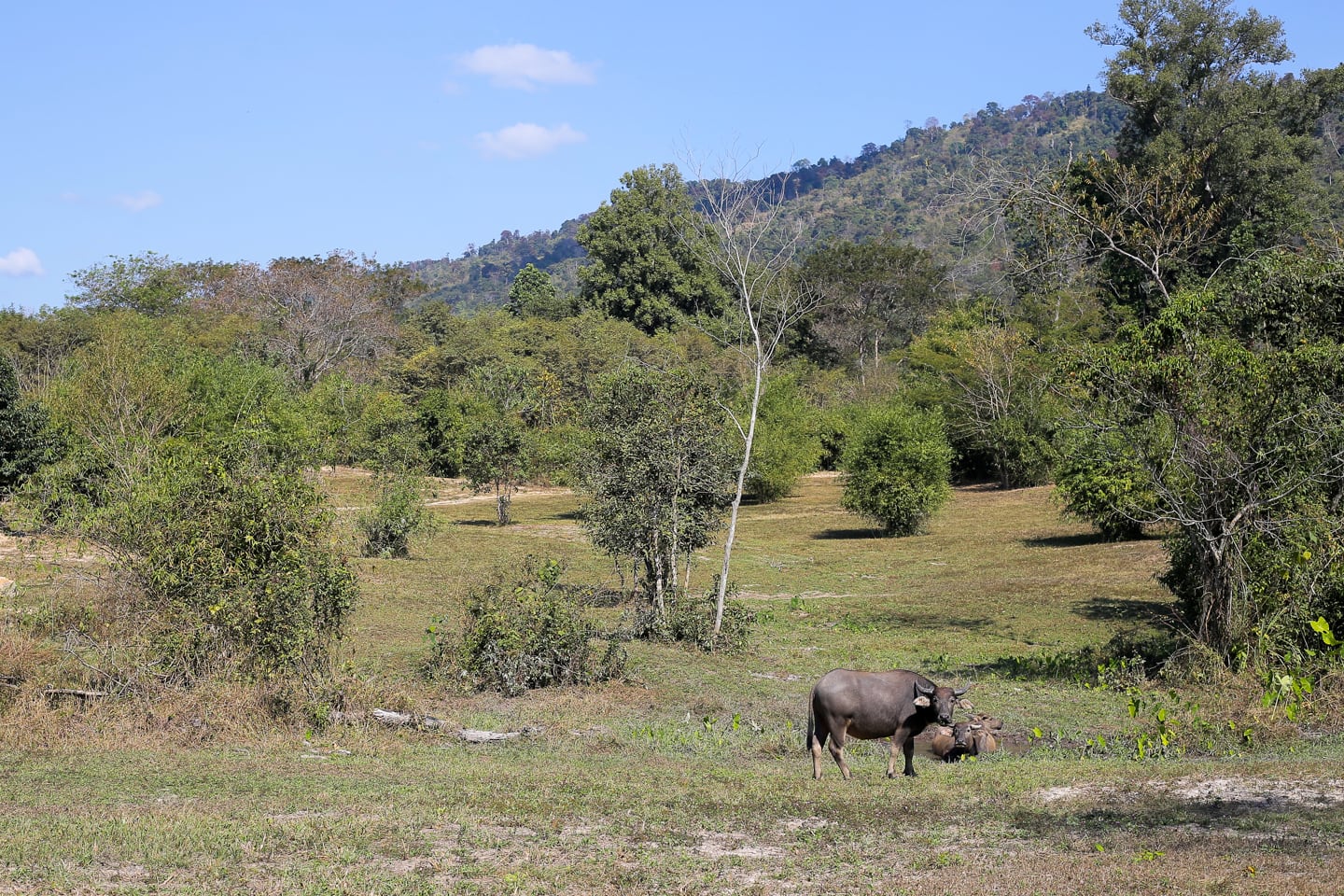 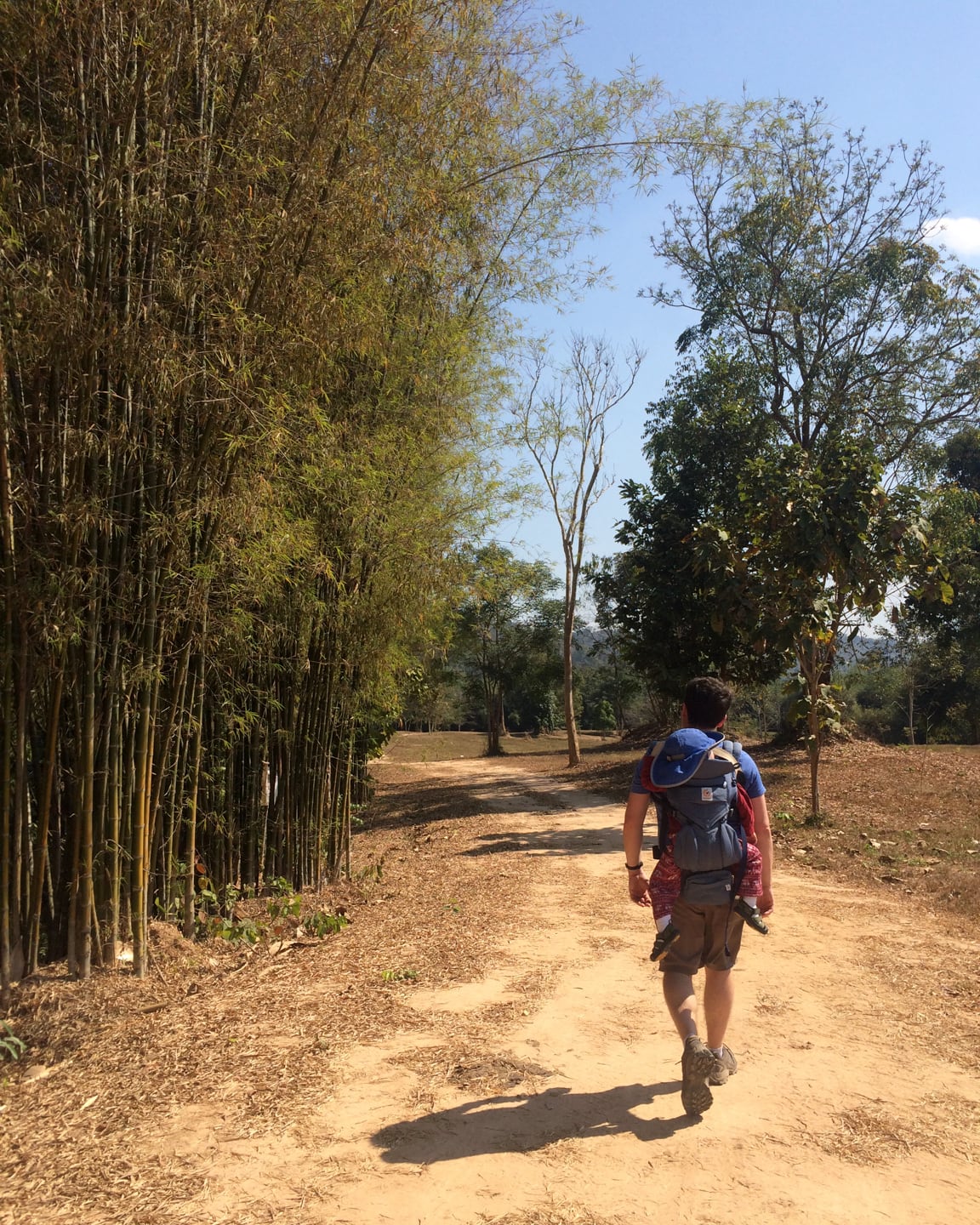 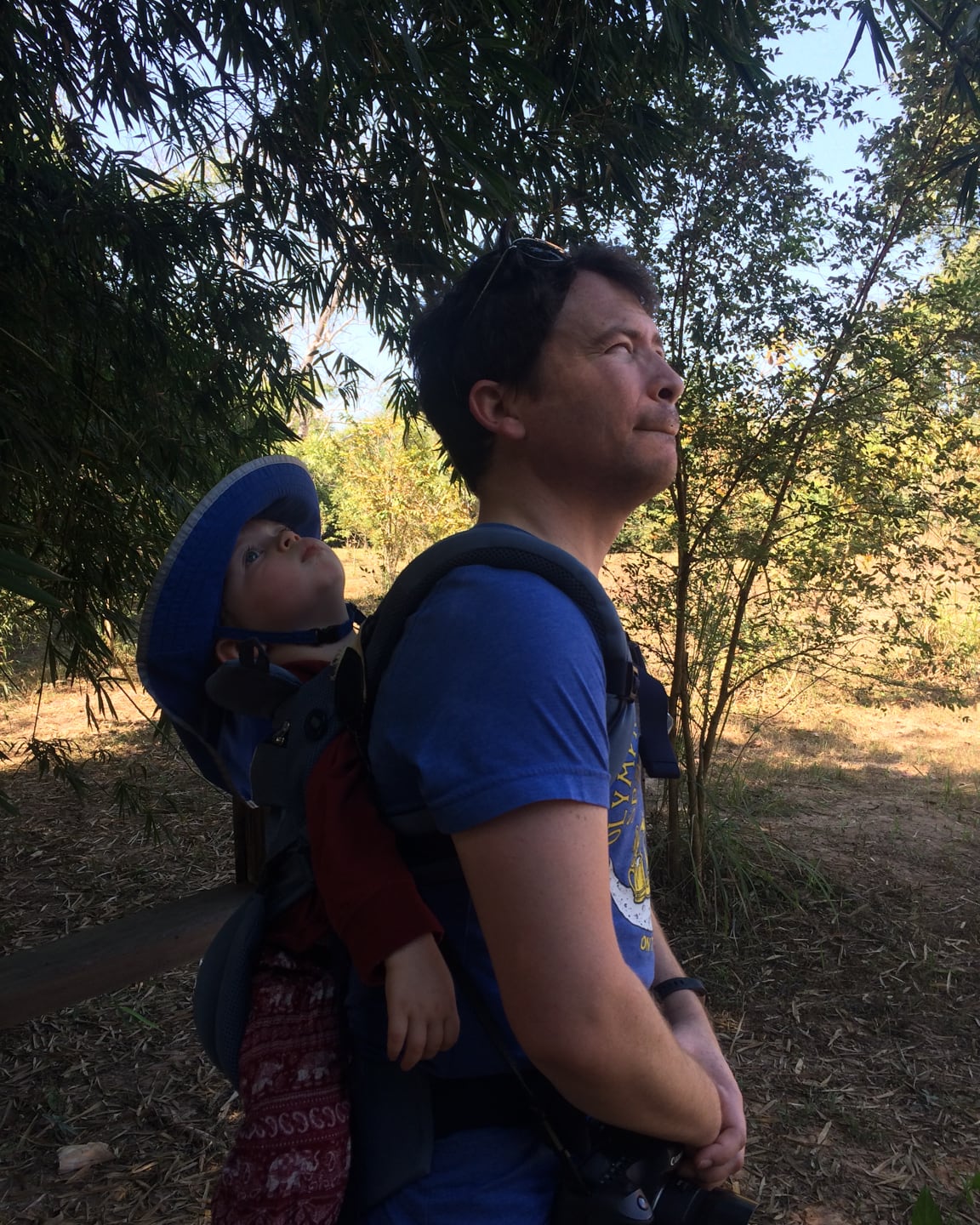 Noe seemed to enjoy the experience for the first ten minutes, tolerated the next twenty, then was over it.

In hindsight, I should have let him walk when we got to this part of the trail, as it was level and packed.

Yet, not knowing how long of a morning or how many miles we were in for, I was hesitant to do so this early on. 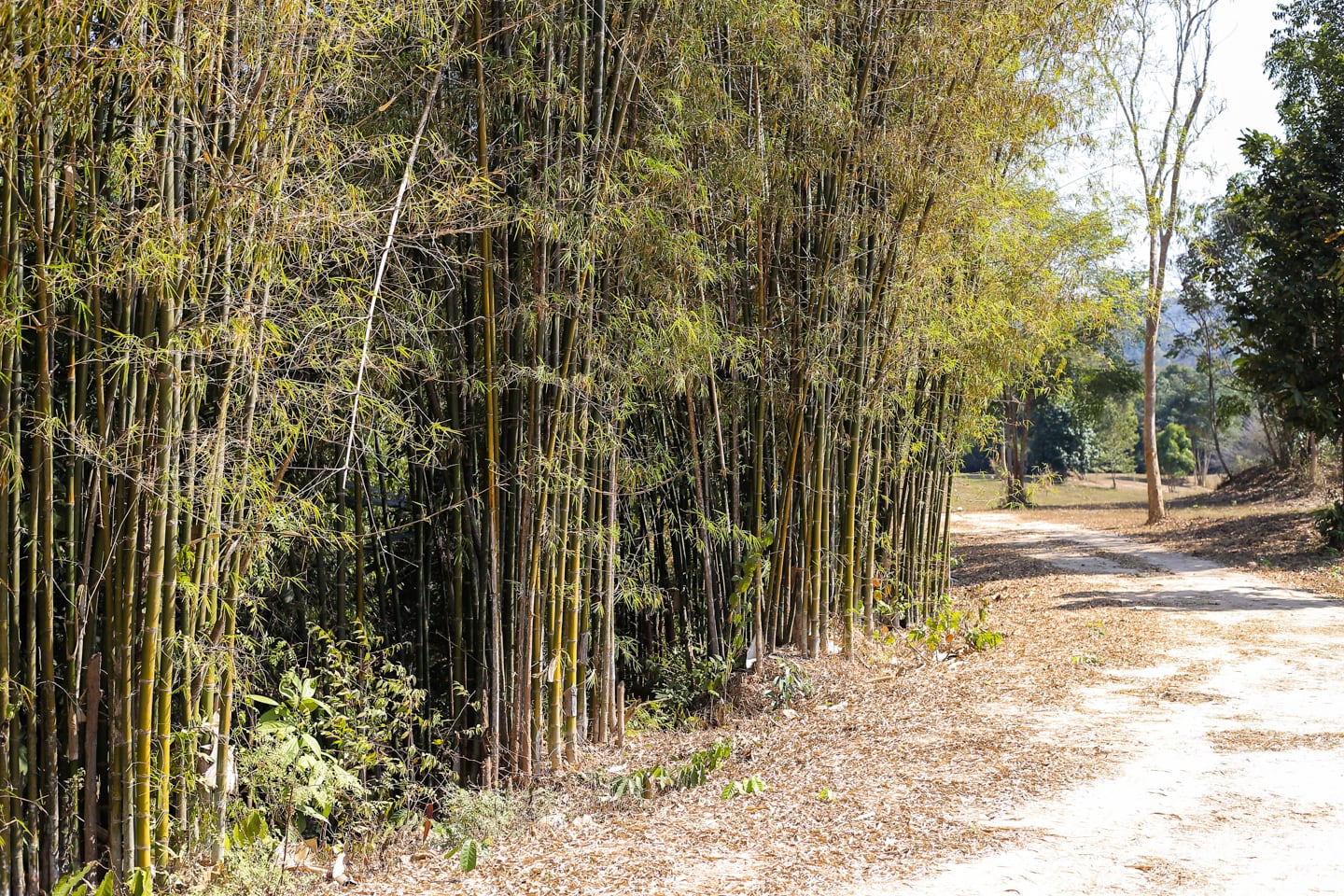 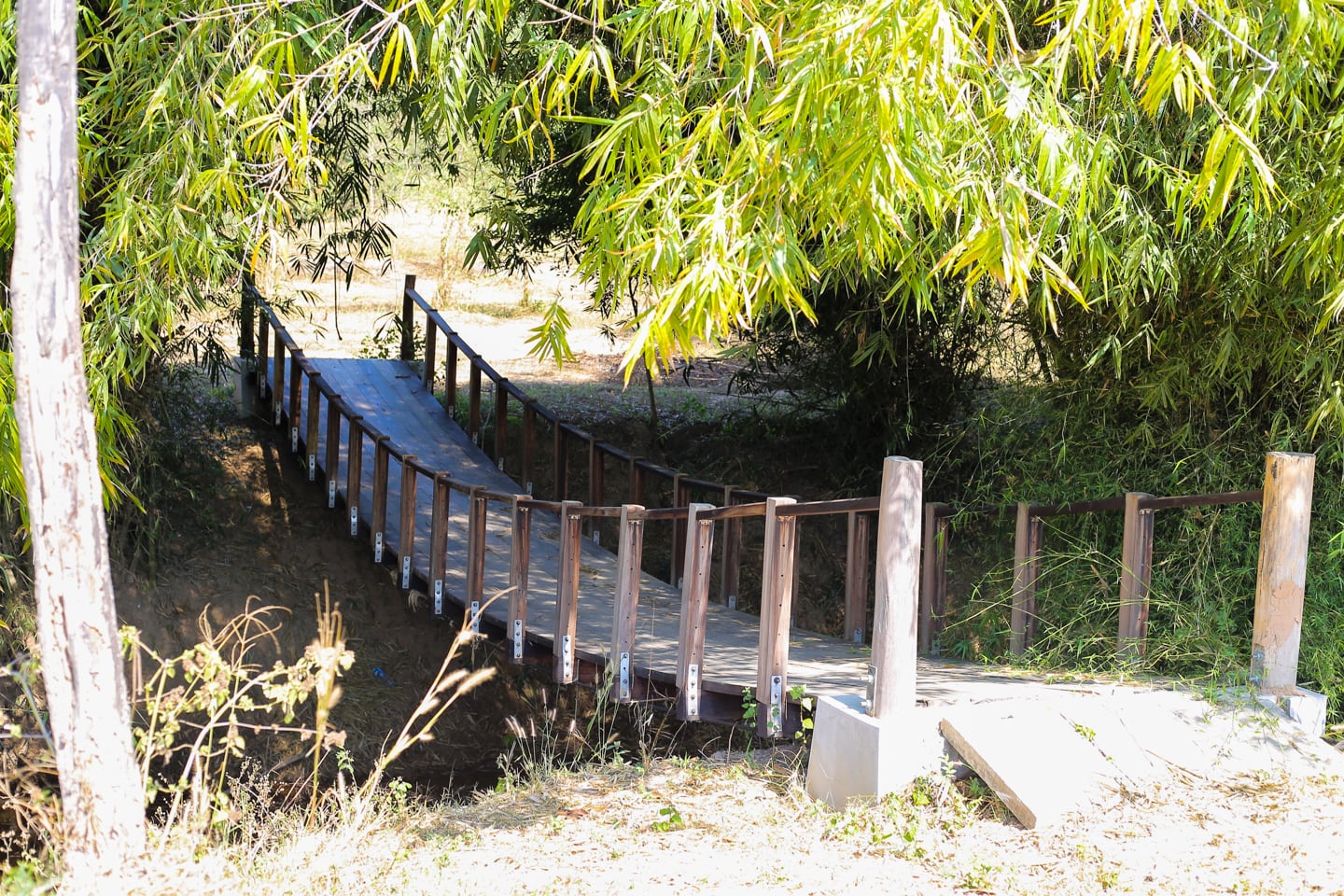 We arrived at a bridge that passed over a small creek.

The creek had hemmed us in to this point, so we were excited to explore the other side. Once over there, we couldn’t find any discernible path in any direction, but rather an open meadow. Given the heat of the morning, we decided to cross back and continue on.

I had seen a photo online associated with Wealth Coffee of a clear and inviting stream weaving around boulders, but this most certainly was not it, at least not in the dry season. 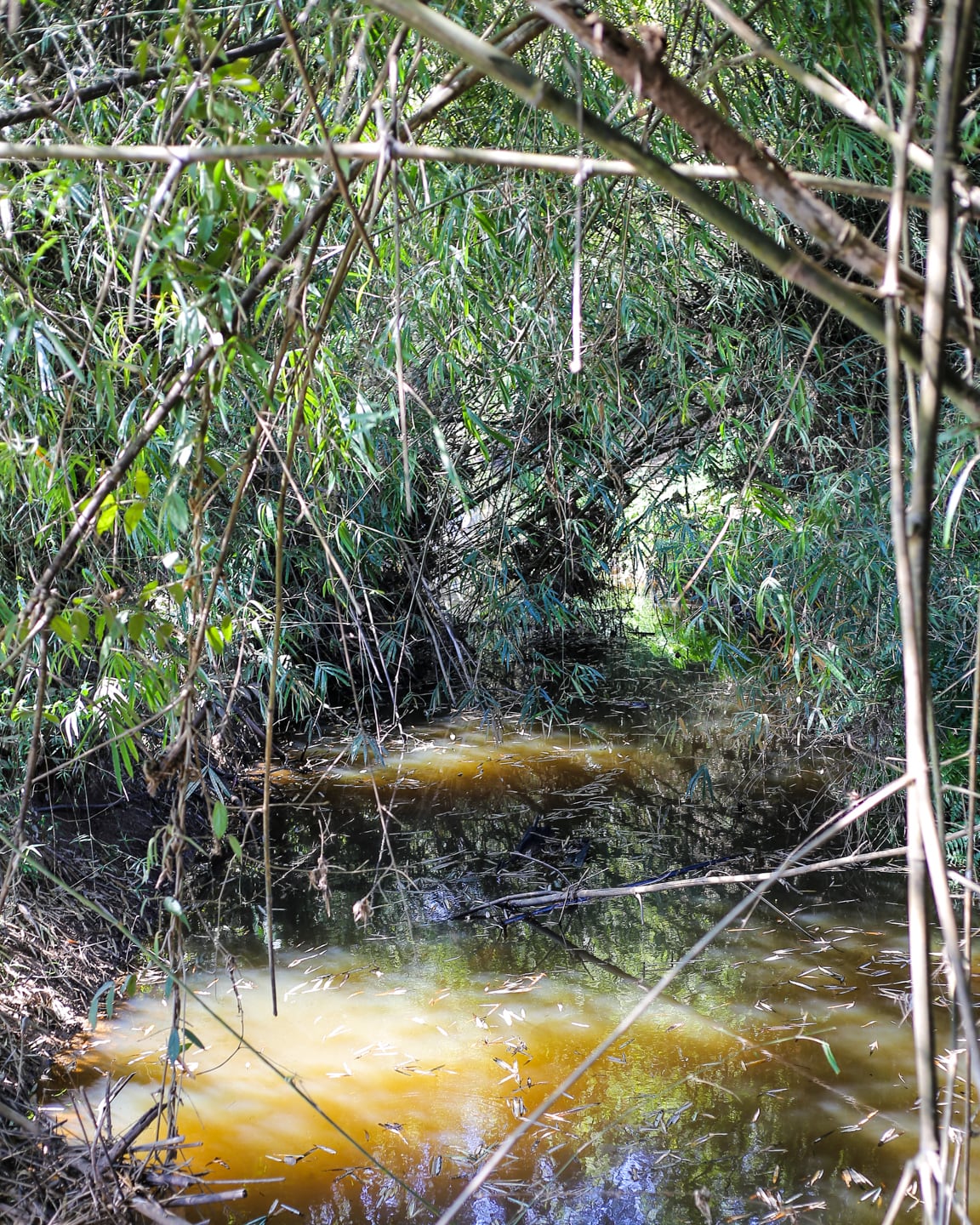 I hoped to find something resembling that photo later on, but never did. Maybe we missed it? 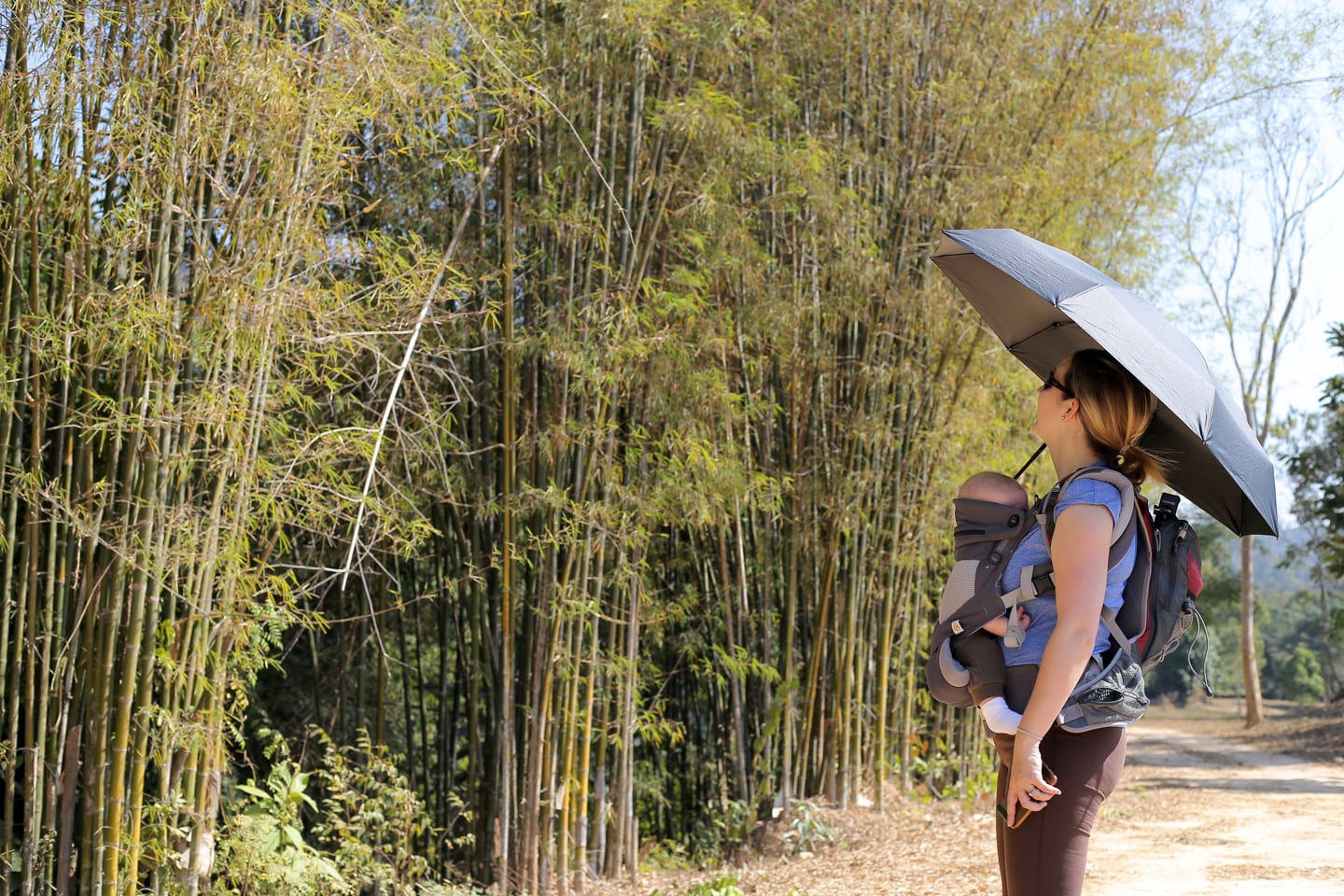 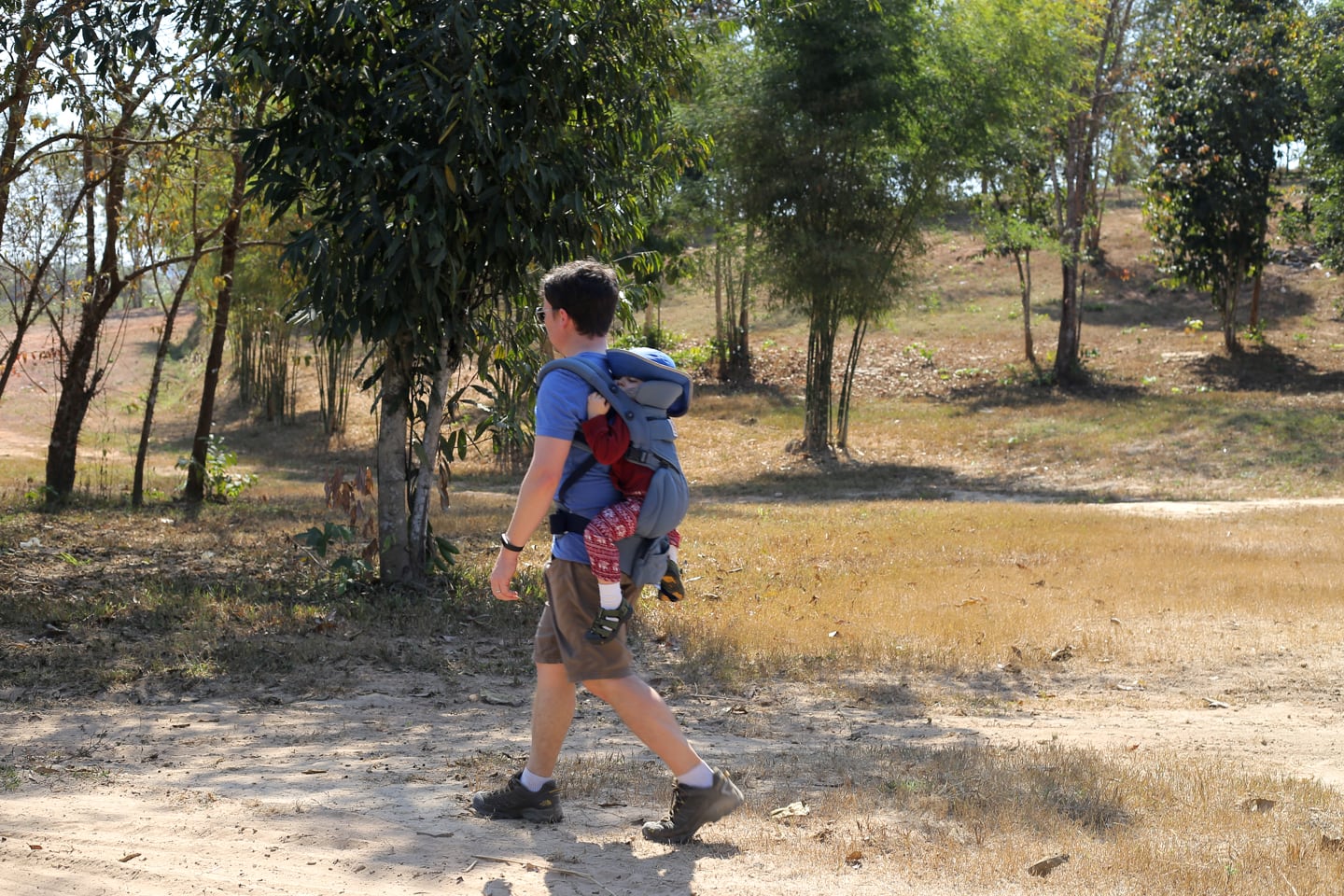 Forty-five minutes into our adventure, we came upon another bridge crossing a small ravine with a locked gate and a handwritten sign posted on it. We assumed it was some sort of boundary to the reserve and carried on. 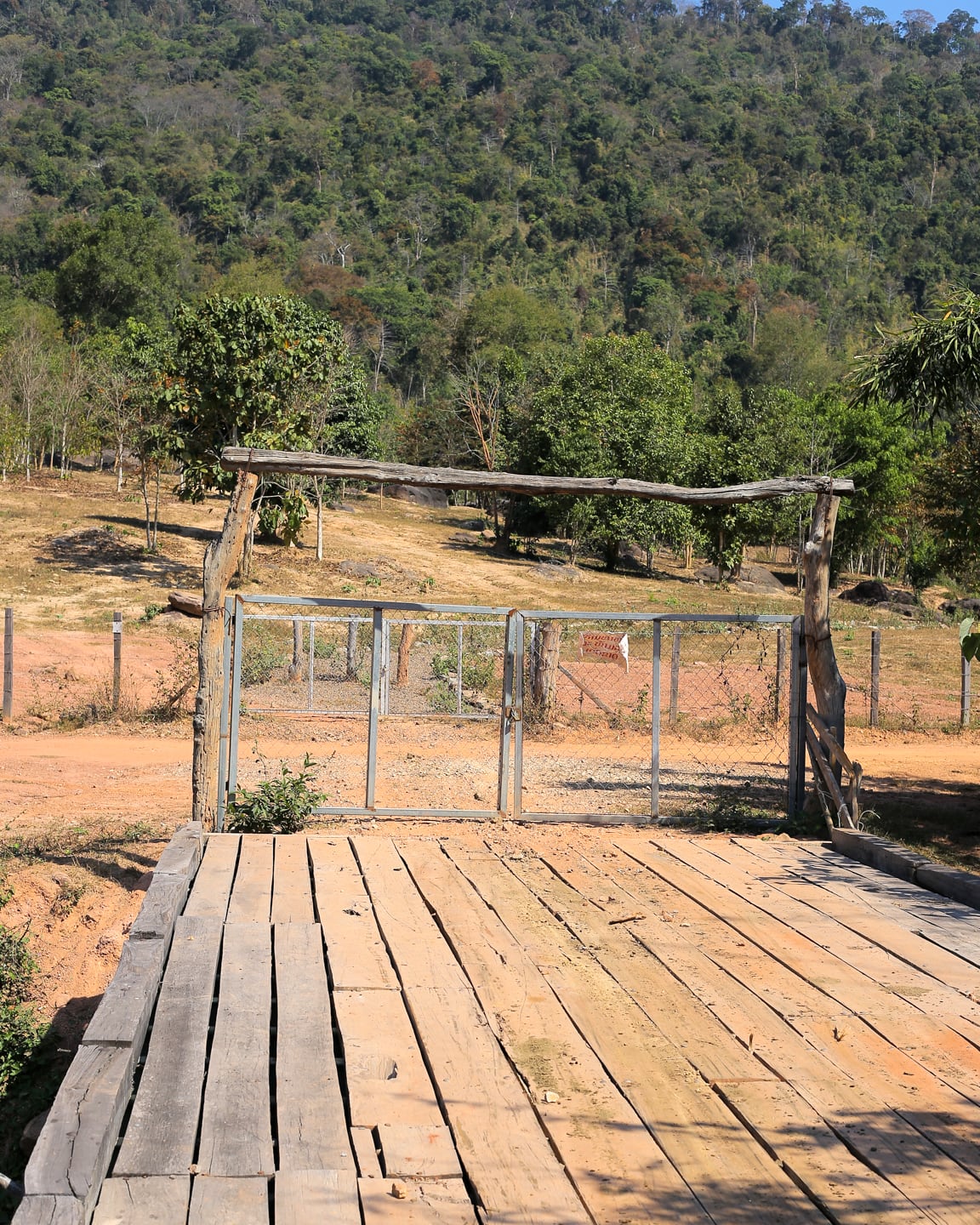 Noe got to walk the last 15-20 minutes. The path at this point wound up a small hill and was a bit rockier than the lower path, but Noe managed without complaint. He was just happy to be walking, and I don’t blame him. 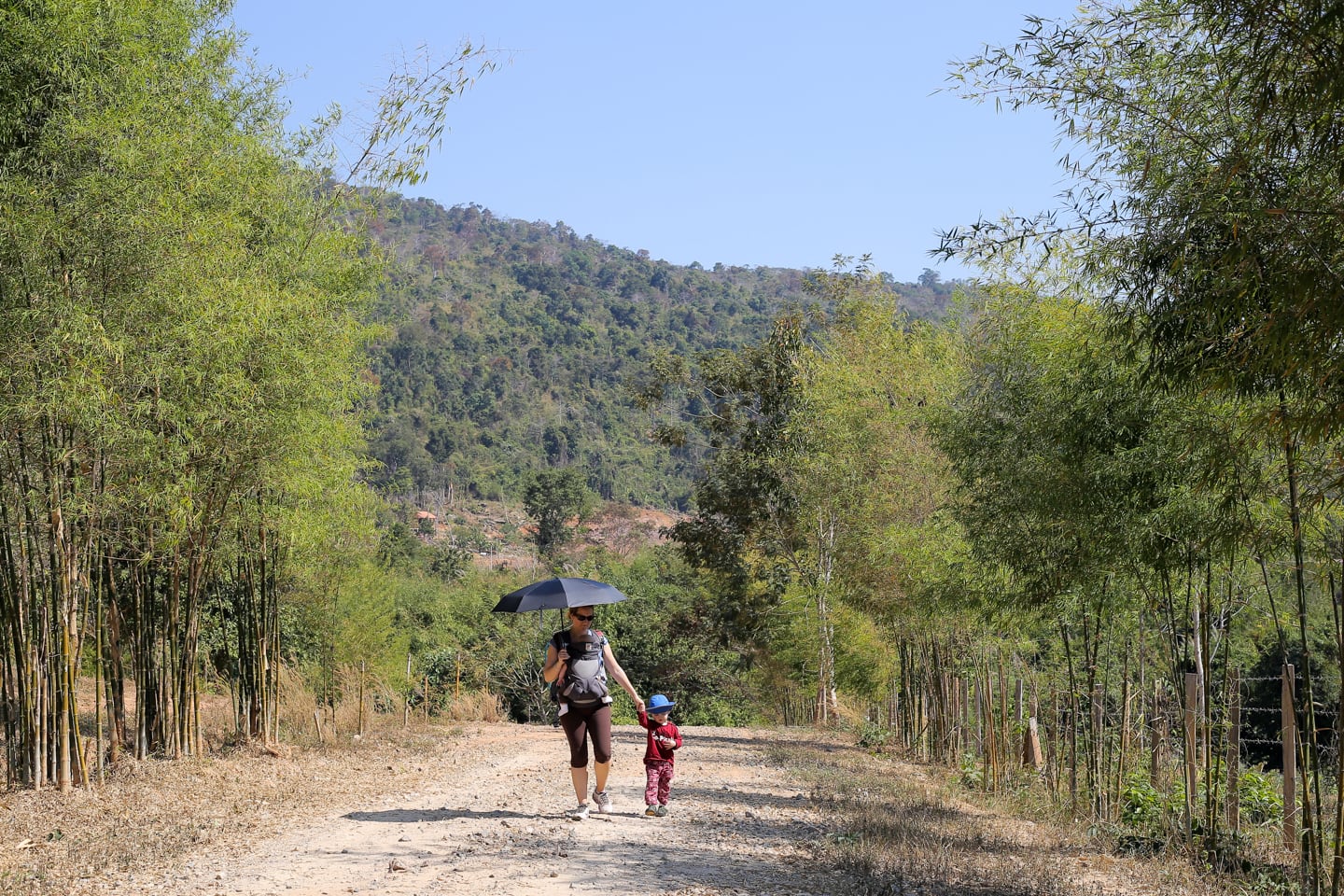 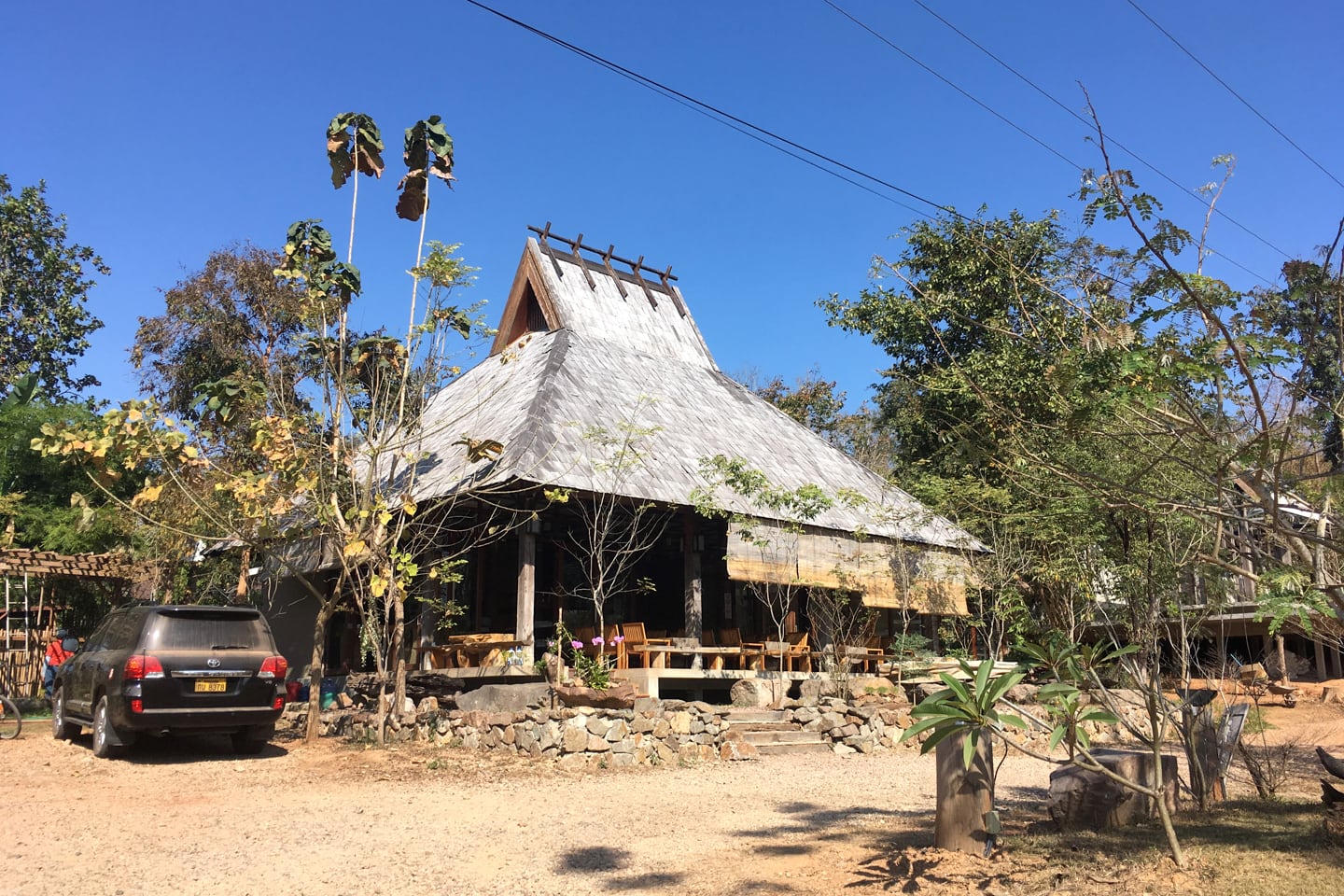 We returned to the coffee shop exactly one hour from setting out, covering just over 2.6 km (1.6 mi). Initially, that might not sound like a lot, but it was more than enough for us on this particular day, taking into account our late start and looming nap times.

We kept to what appeared to us to be the perimeter of the reserve, but you could easily add more distance exploring the paths winding through the interior of the reserve as well.

And who knows, maybe there’s a whole slew of trails we simply overlooked on the other side of the creek or elsewhere.

Even a short walk with little ones (and in the tropics) can be exhausting. Ironically, it was the one who did the least walking that tuckered out first. He was out before we even started the engine.

Friends of ours have confirmed that there are even more trails running up the hill to a viewpoint! Ask the staff in the coffeeshop for more details on how to access them. 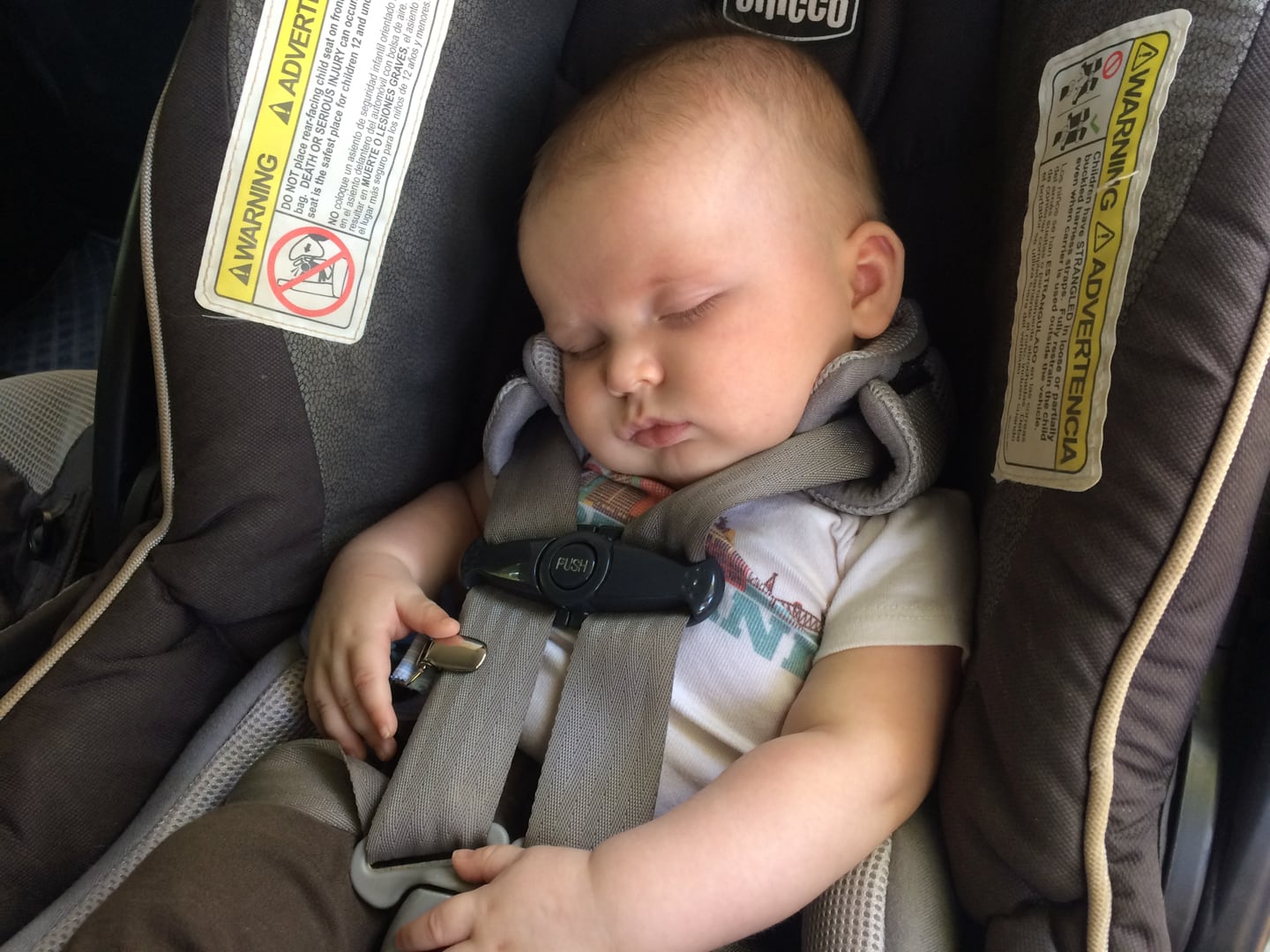 Have You Visited Wealth Coffee Near Vientiane?

What was your experience like? Did you hike the hidden trails?
Let us know in the comments below. 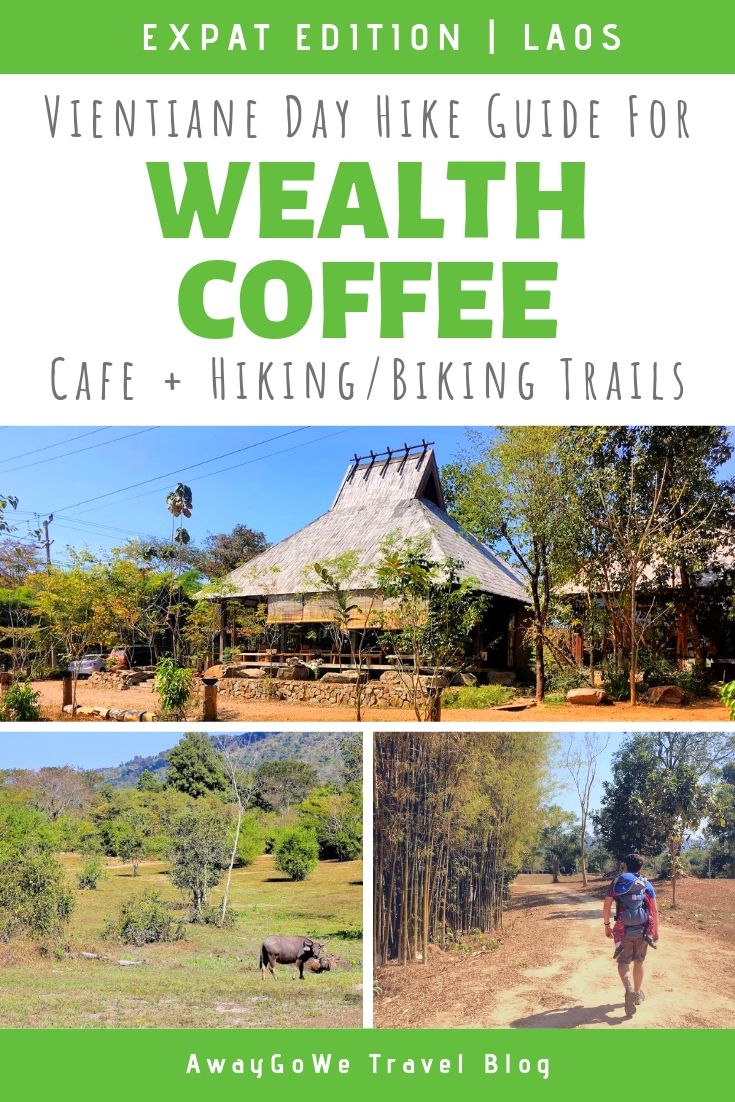