For some in Laos — the Boat Racing Festival is the big reward after a long, hard planting season.
For many, many more — it’s one more excuse to party down. 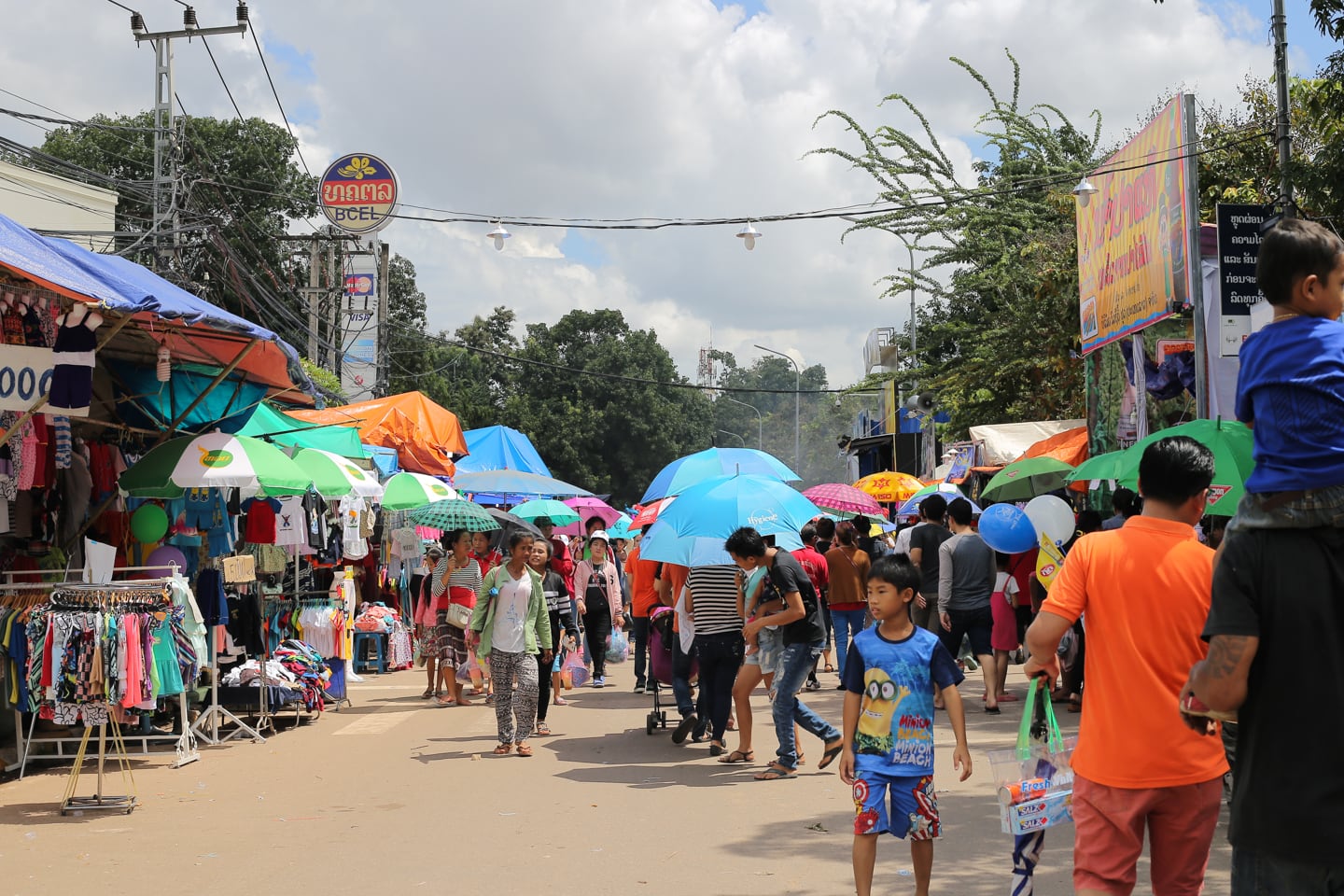 Lori’s got Friday off for Vientiane’s biggest sporting event of the year: the Boat Races on the Mekong. I’m sure at some point the national holiday was meant to observe the end of Buddhist Lent. But there’s no kidding anyone now, this day is all about the national finals of the Laos Boat Racing Festival (Boun Suang Heua). And the fanfare surrounding the races seems to be just as big of a deal. Revelers come for the races, but they stay for the associated activities–chief among them? Shopping. There do in fact seem to be three things that Laotians love above all others: Their sticky rice, their BeerLao, and…their shopping! 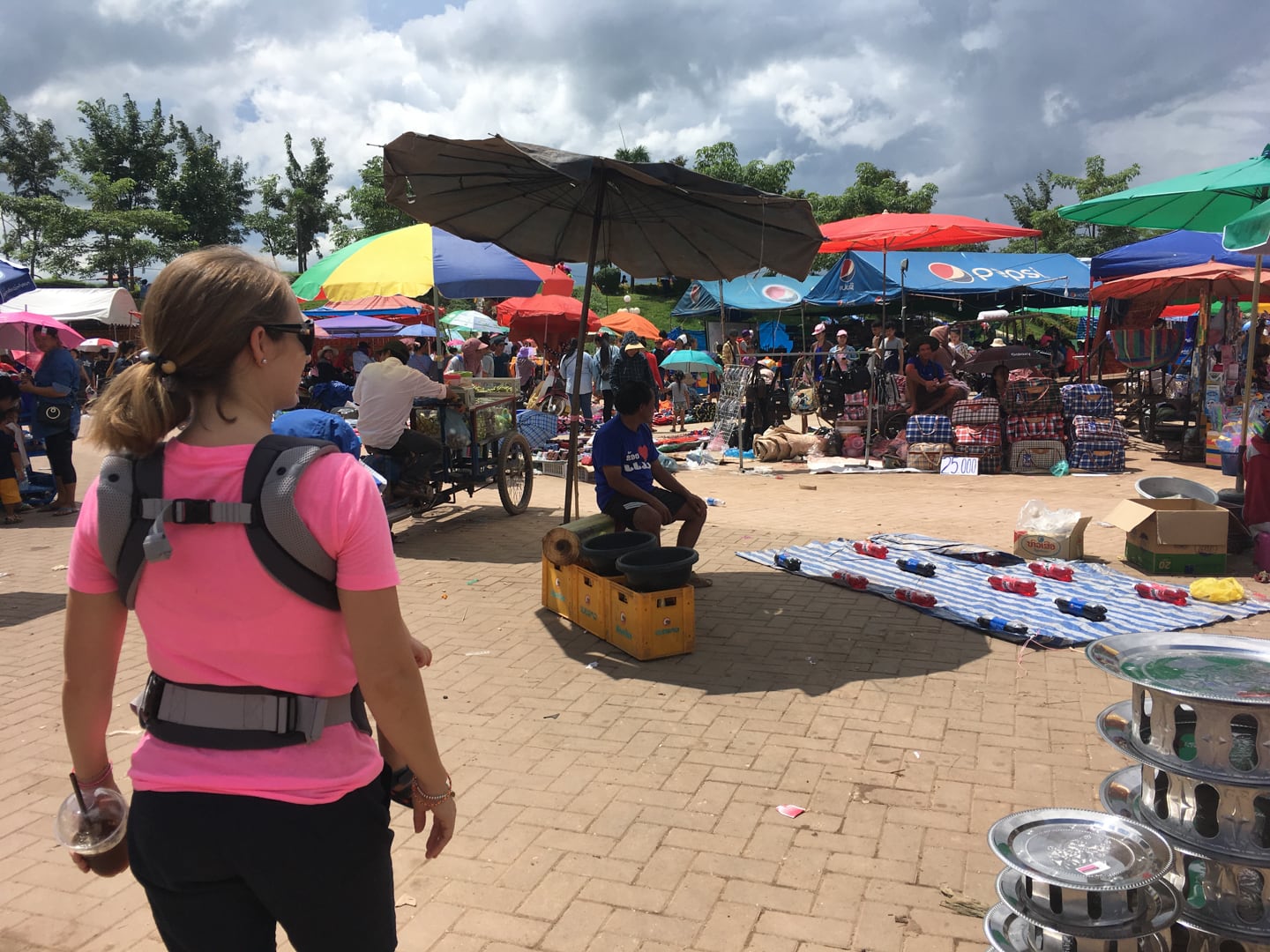 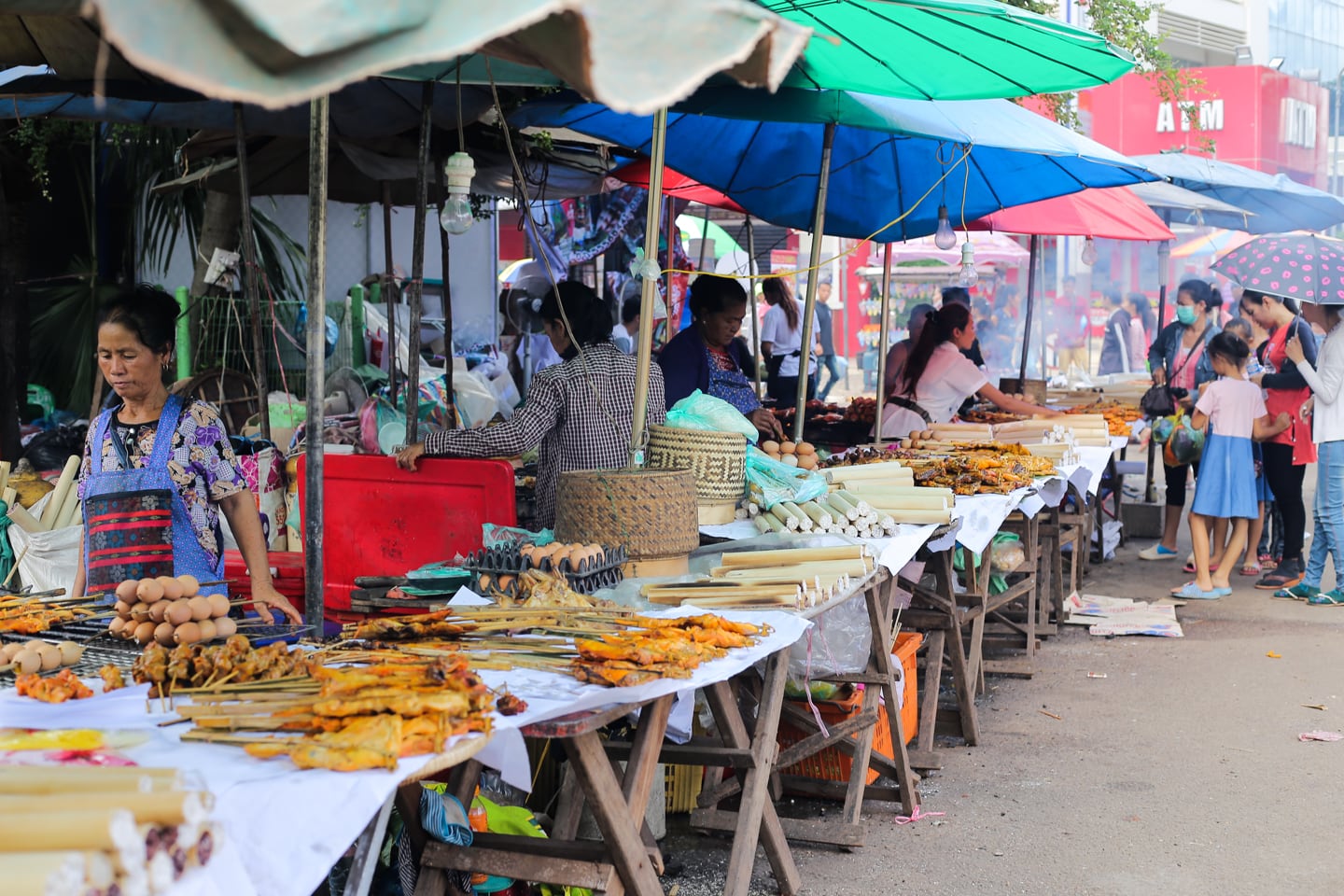 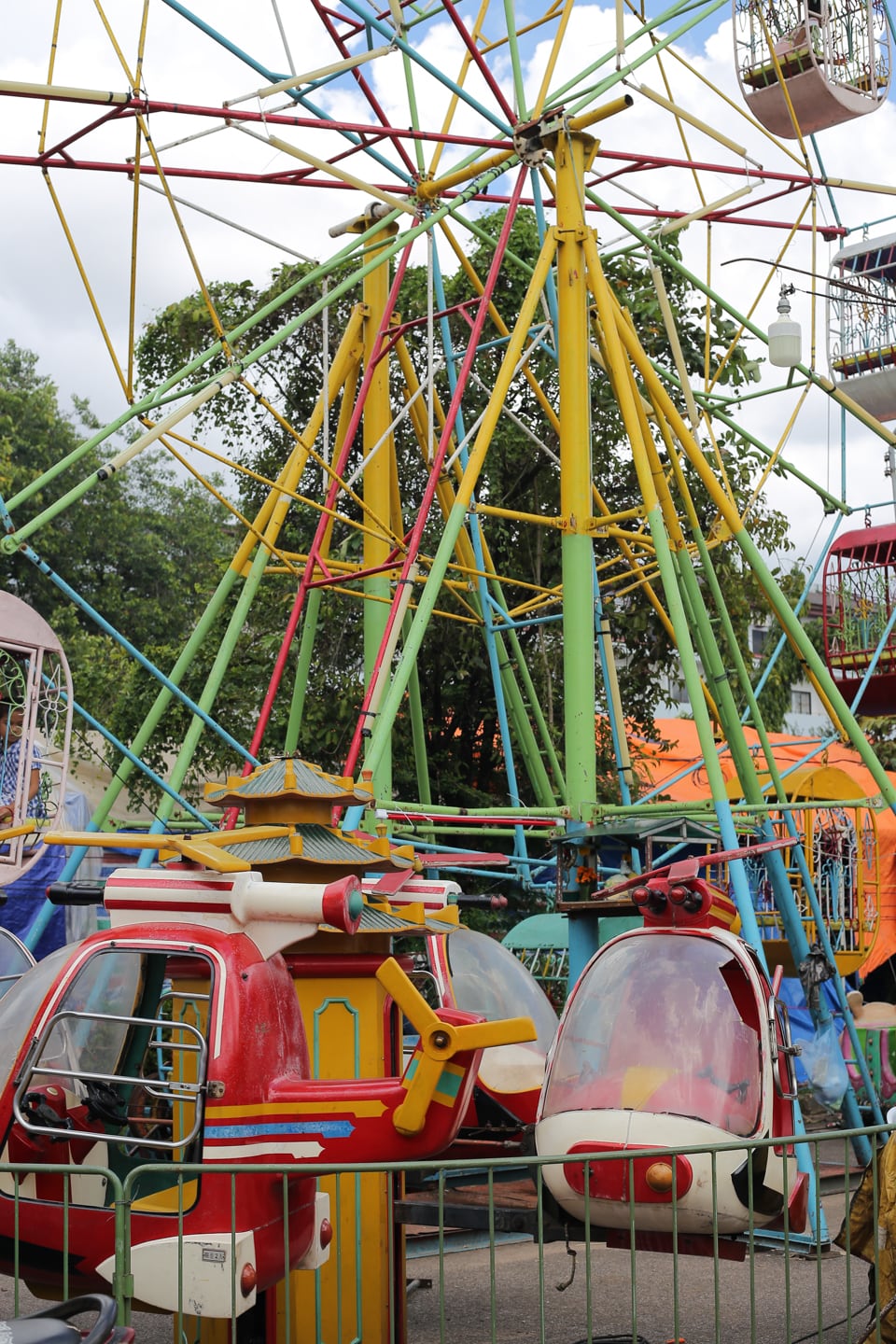 En route to the viewing area for the boat races, we pass through the carnival we eyed the night before after sending a candle boat down the Mekong marking the end of Buddhist Lent. The walking path takes us right through the middle of a BINGO tournament in full swing with all sorts of prizes. 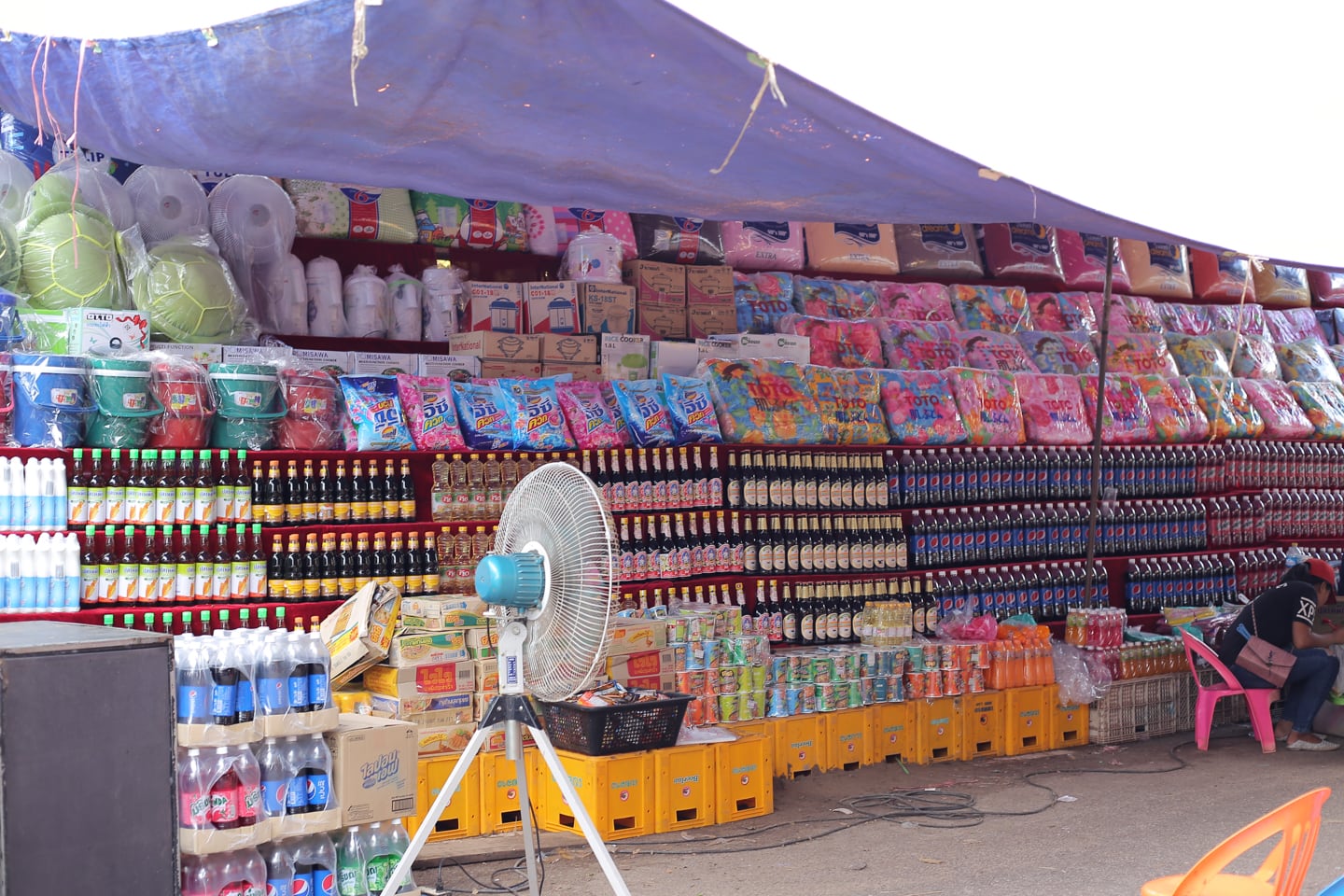 If I could win BeerLao playing BINGO in the States, the local grange would be hard pressed to get rid of me. 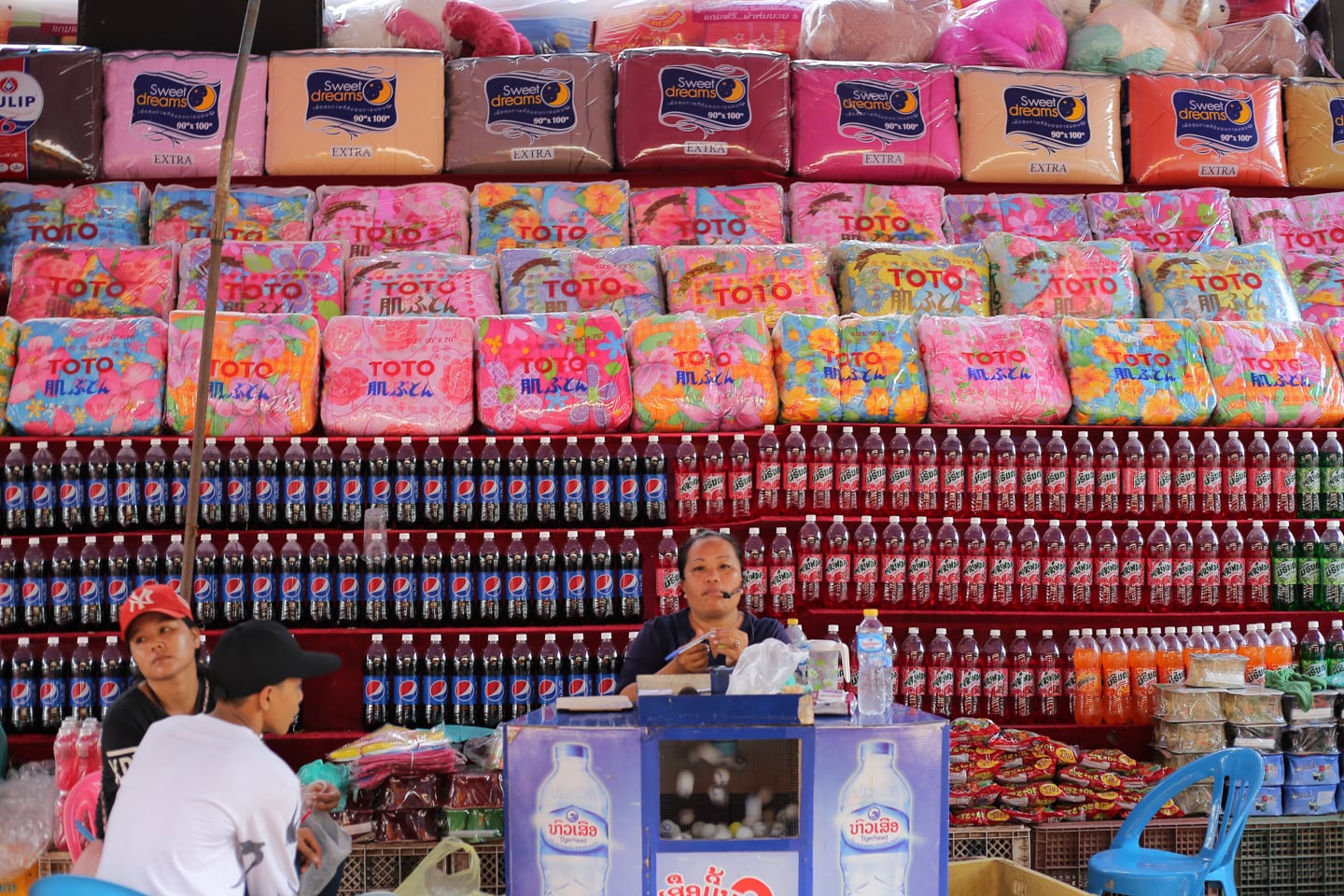 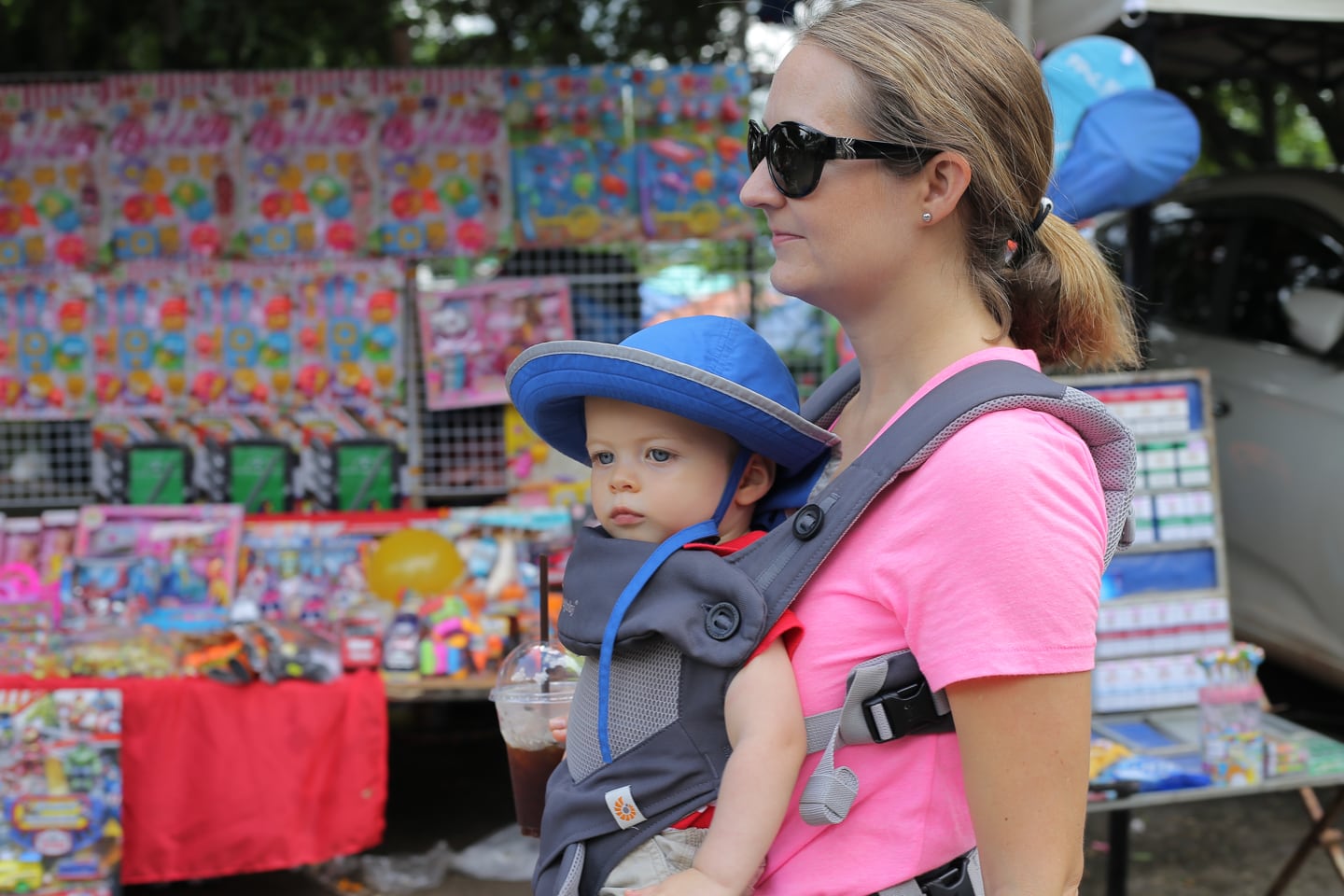 Noe, as always, taking it all in. 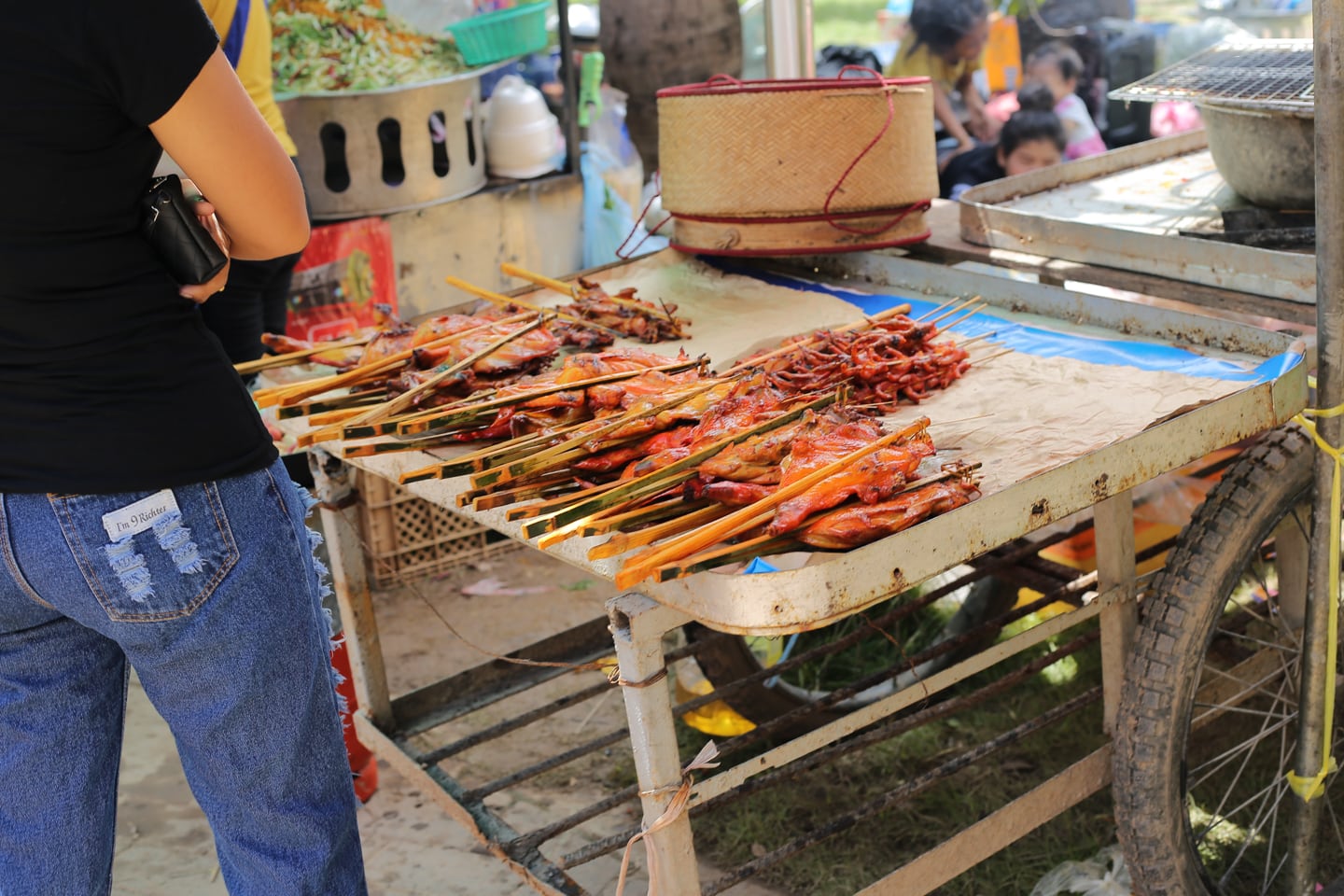 More ping gai. And what boat racing festival would be complete without… 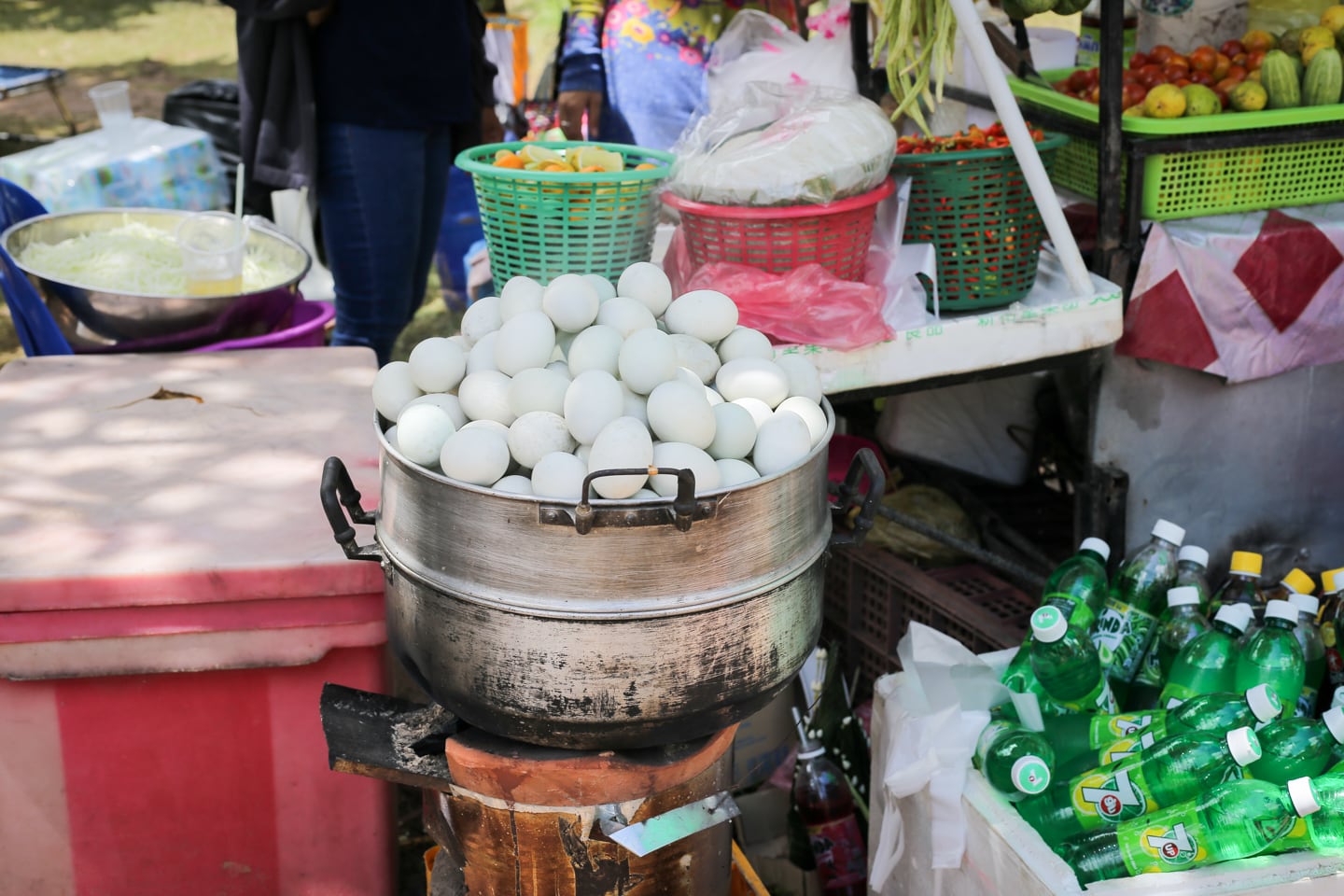 Yep, khai louk (which literally means “egg baby” is the name given to baby duck embryos, a favorite street food throughout Southeast Asia. Choose from three stages of embryo development. Stage 2 seems to be preferred here as each of these eggs were selling for the most (about US$0.60). Perhaps one of these days we’ll bite the bullet (er, baby, rather…) and try one. Perhaps…

Over here, we’ve got something I can totally get on board with: 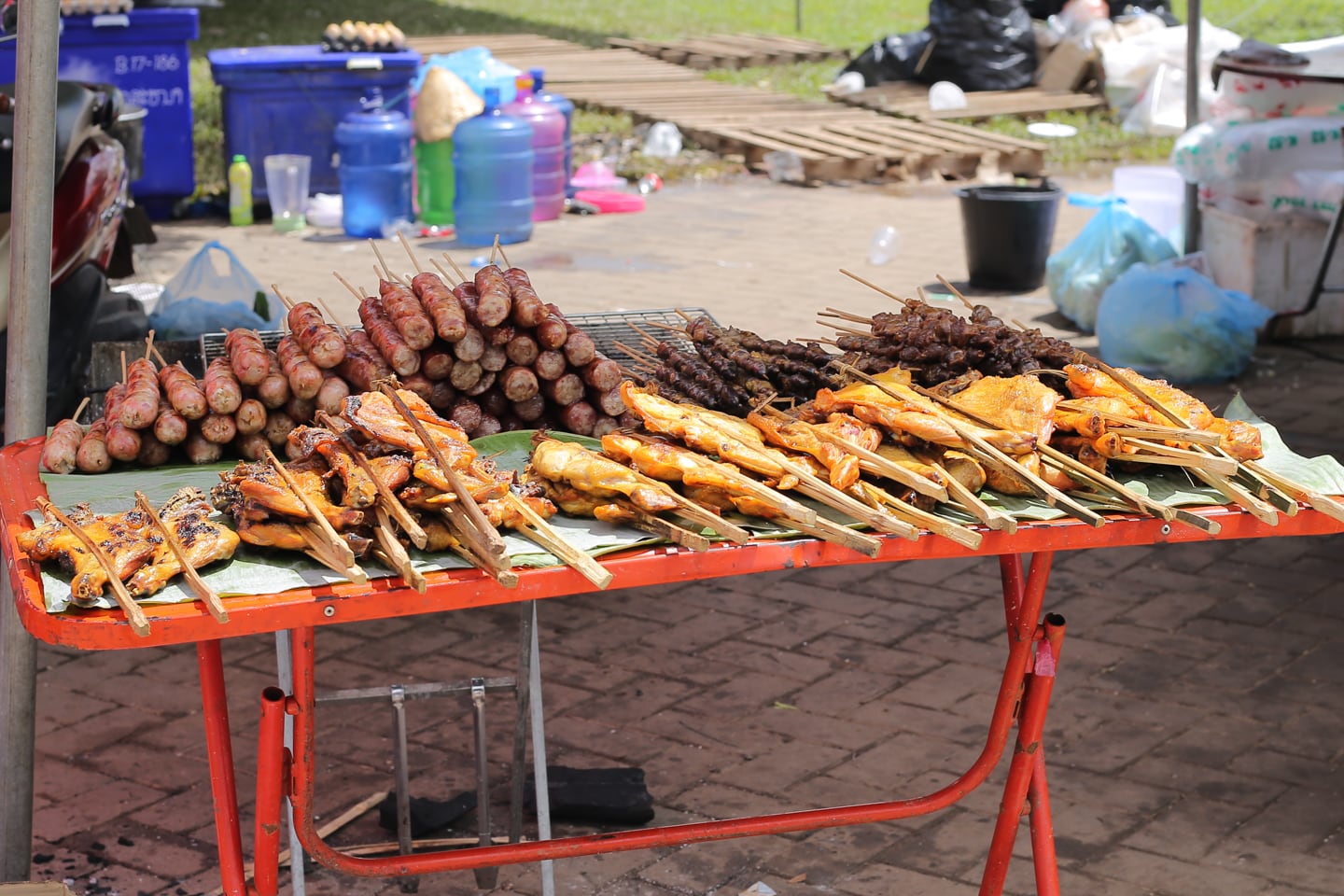 Mekong sausage! Okay, now we’re talking. The grilled tripe sticks next door, maybe not so much.

Speaking of getting onboard… 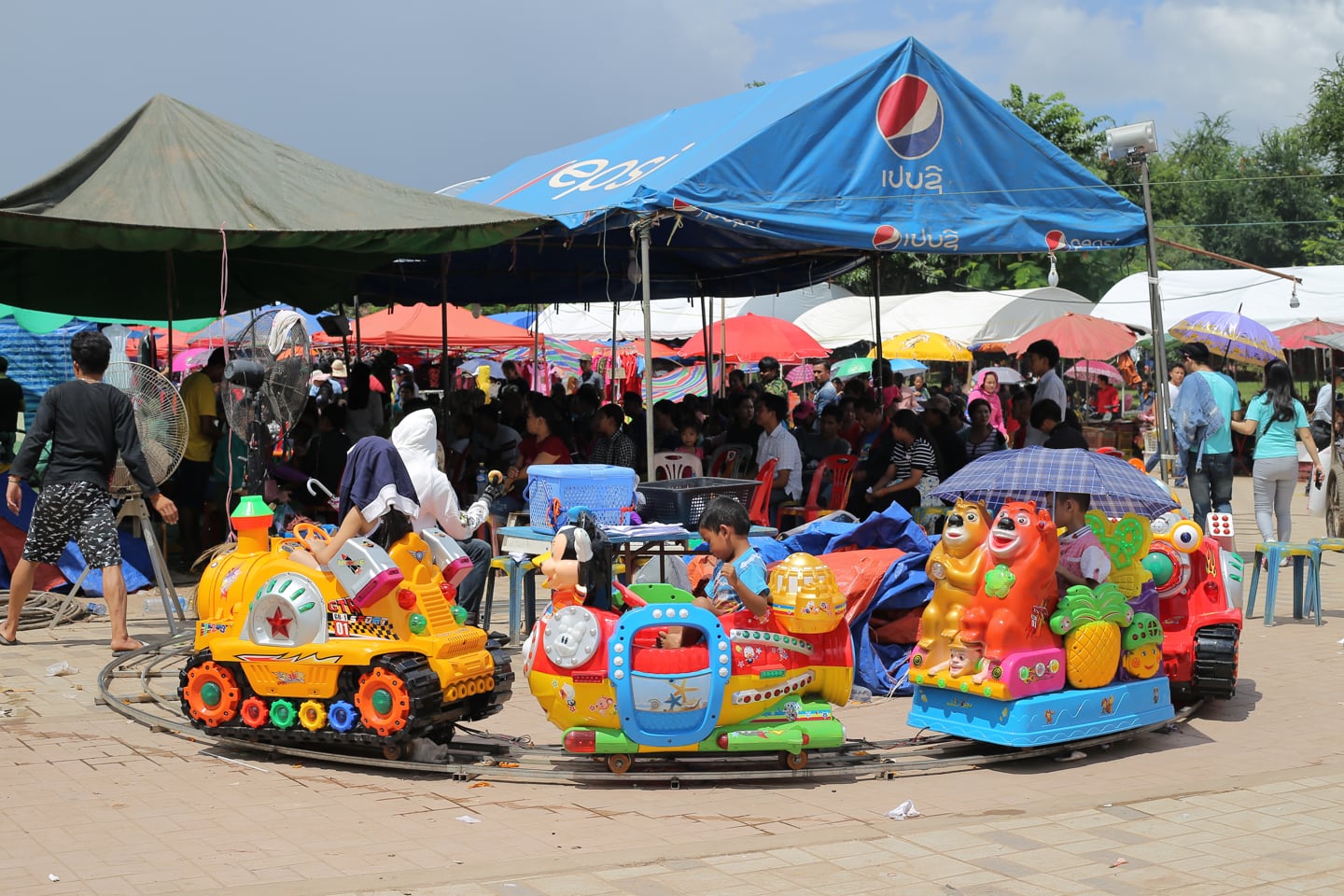 Oh, to be fifteen months younger again. But now, I’m a dad and have to be respectable and all, right? Nope, they wouldn’t have let me on in a million years, so I’ll just have to live vicariously through Noe, when he’s old enough to hold his own umbrella. On a side note, is that Donald Trump peering out the front of the third car back? Well played, China. Well played.

So, you may remember five years ago (almost to the day), we took a picture that we eventually included in one of our posts: 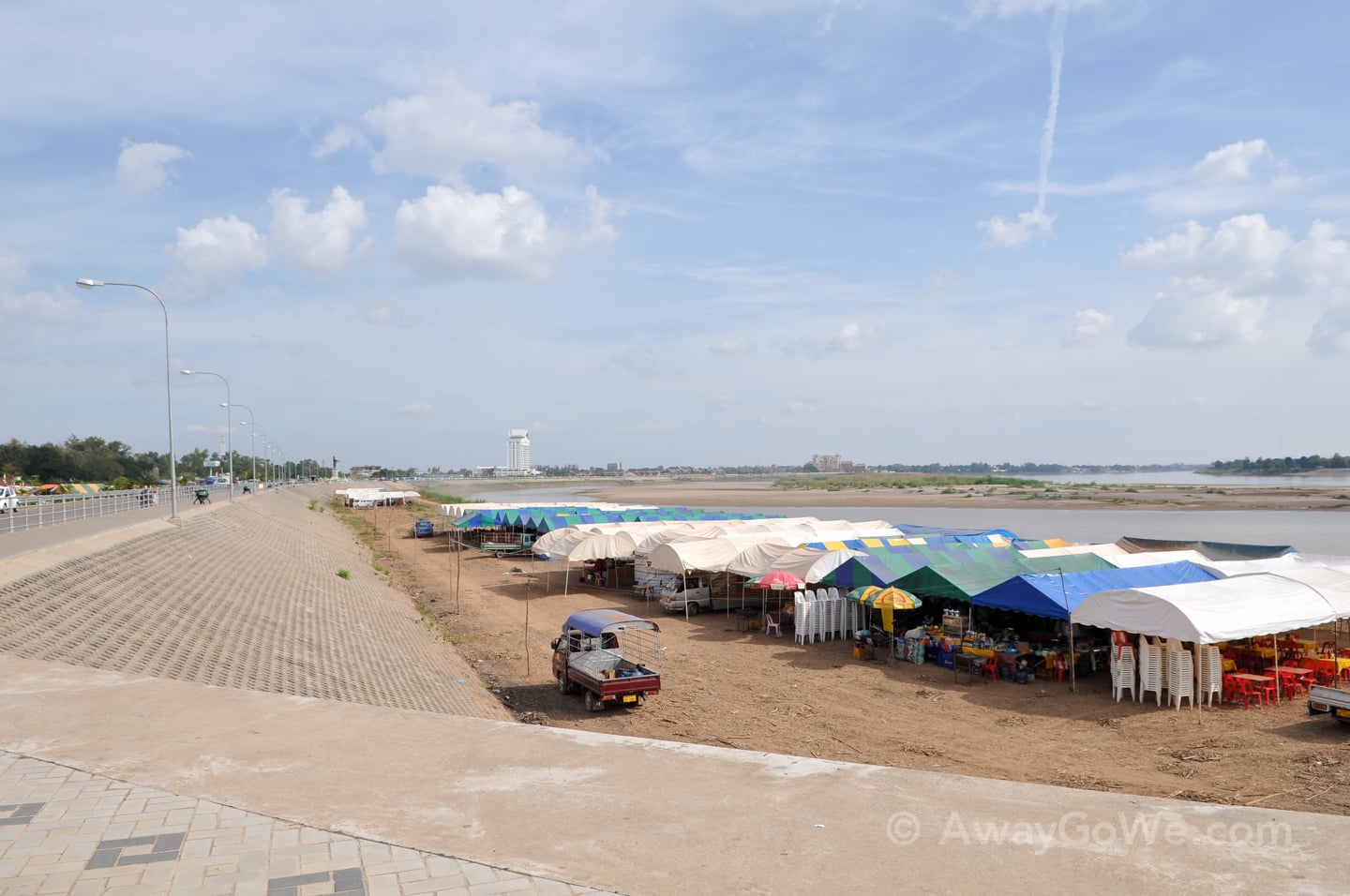 Then, a mere four-and-a-half years later, we posted another pic taken from the exact same spot: 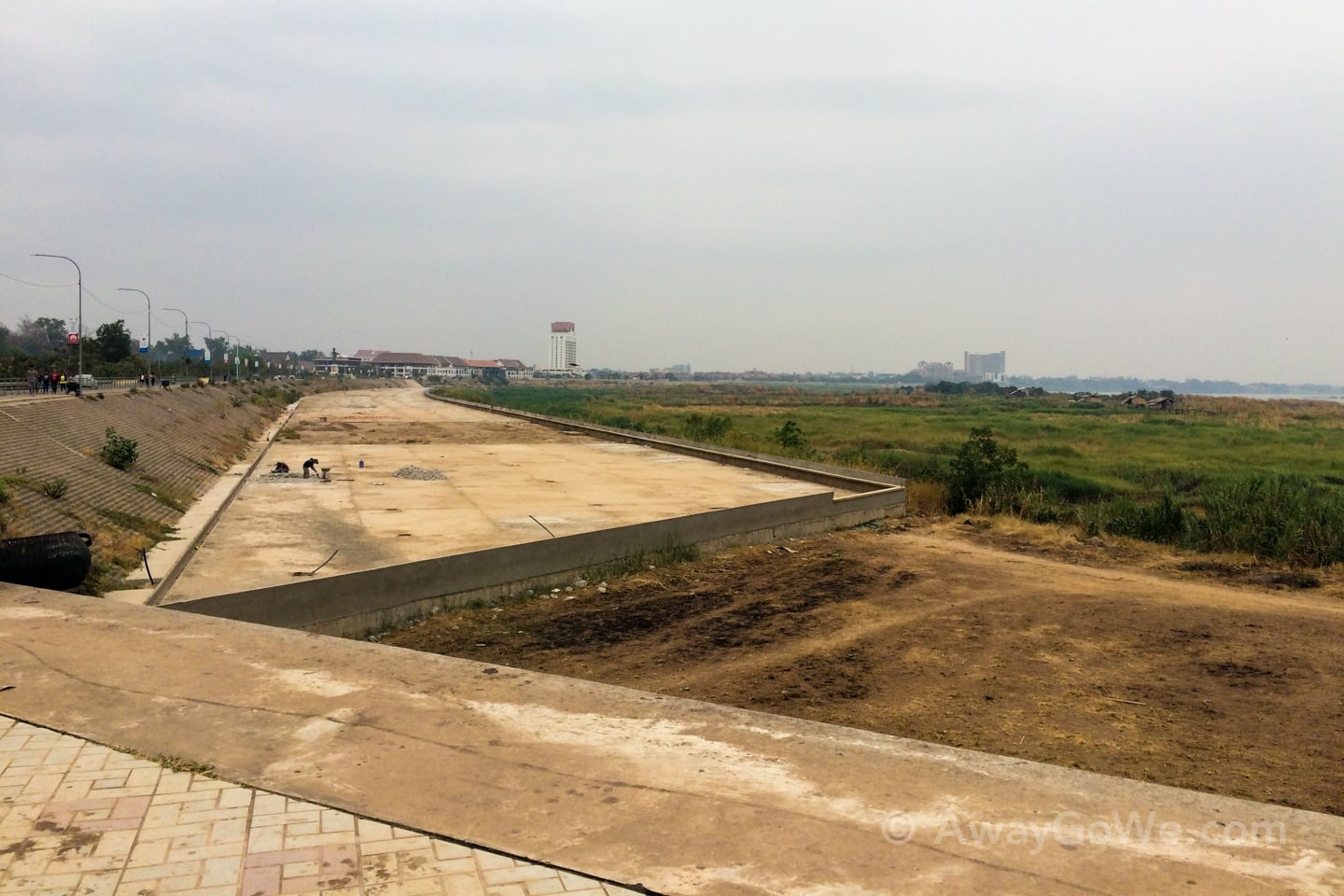 Based on the pace of things over the past five years, we weren’t holding out much hope that we’d ever see the completion of whatever was intended for this mile stretch of Mekong waterfront in the heart of downtown. And then, Awk Phansa rolled around, and all of a sudden… 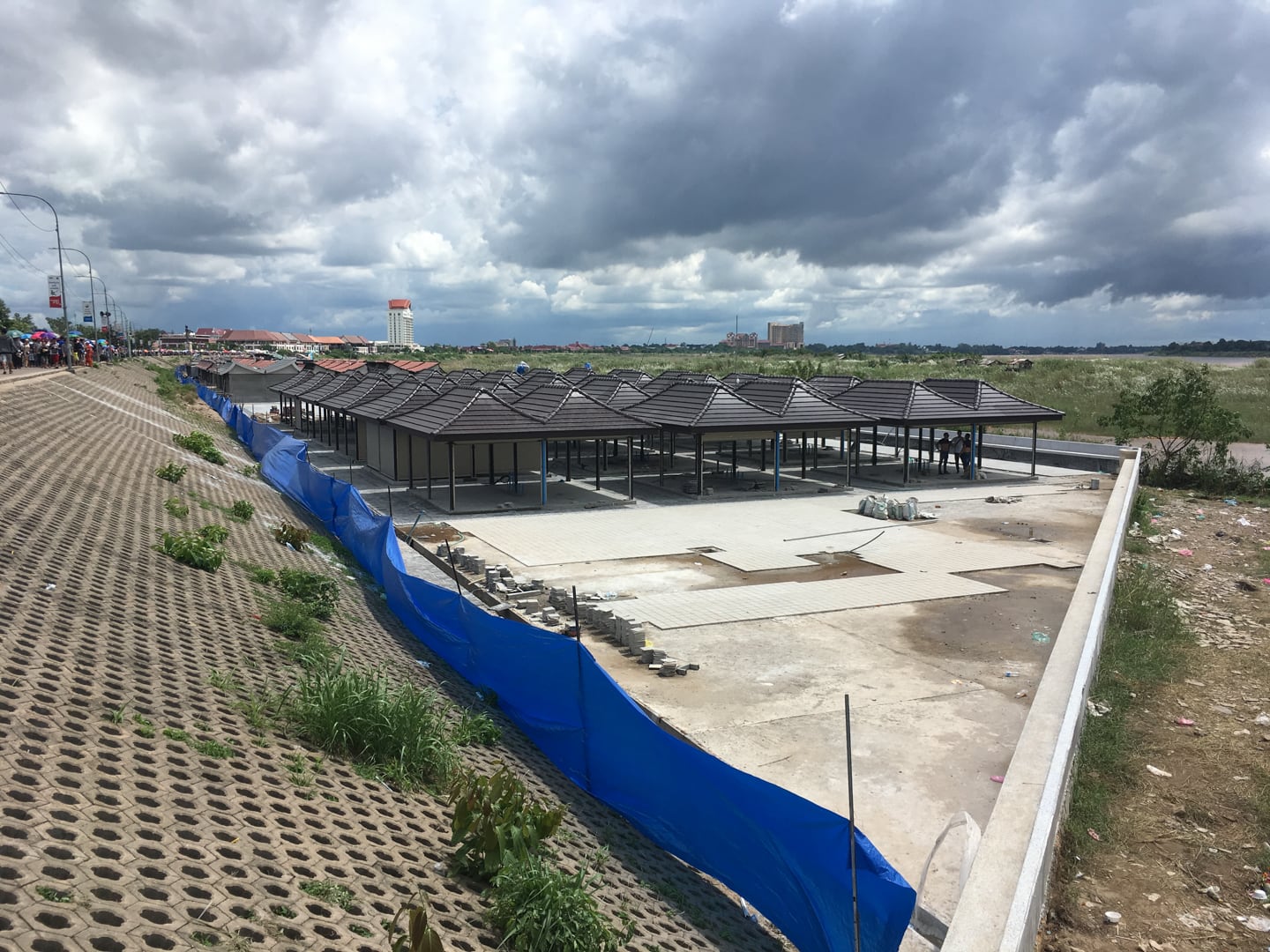 So, Lori and I guessed right–a market space. A very, very large outdoor market space. Our best guess is that they’ll be moving the night market down here (which currently has to be put up and taken down every evening of every day throughout the entire year). Still, knowing how these things work in these parts, the project could stall at any moment, and there’s an excellent chance city officials, investors, or developers could change their minds at any minute and scrap the whole thing, or just plain run out of cash. We’ve seen it all over the city. Stay tuned… 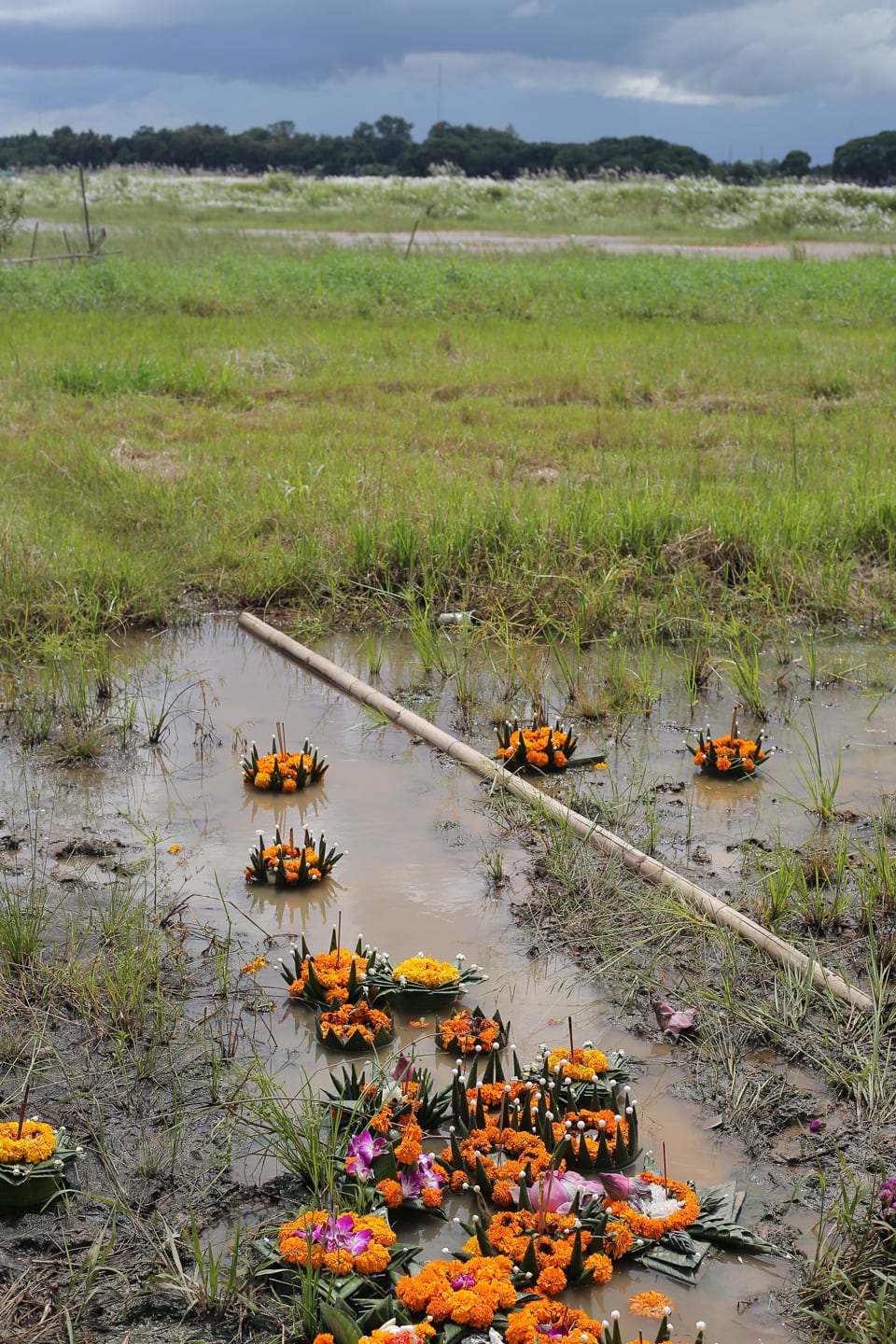 Some of the remnants of the previous night’s festivities. A beautiful, spiritual, and romantic ritual on the dimly lit banks of one of the world’s great rivers, reduced–in the light of day–to swamp refuse. Something akin to the dozens of empty wine bottles and dirty dishes strewn about the living room the morning after the big annual Christmas party, begging the question, what the $%&@ happened last night? And why the heck are there marigolds, banana leaves, and swamp water all over our living room? 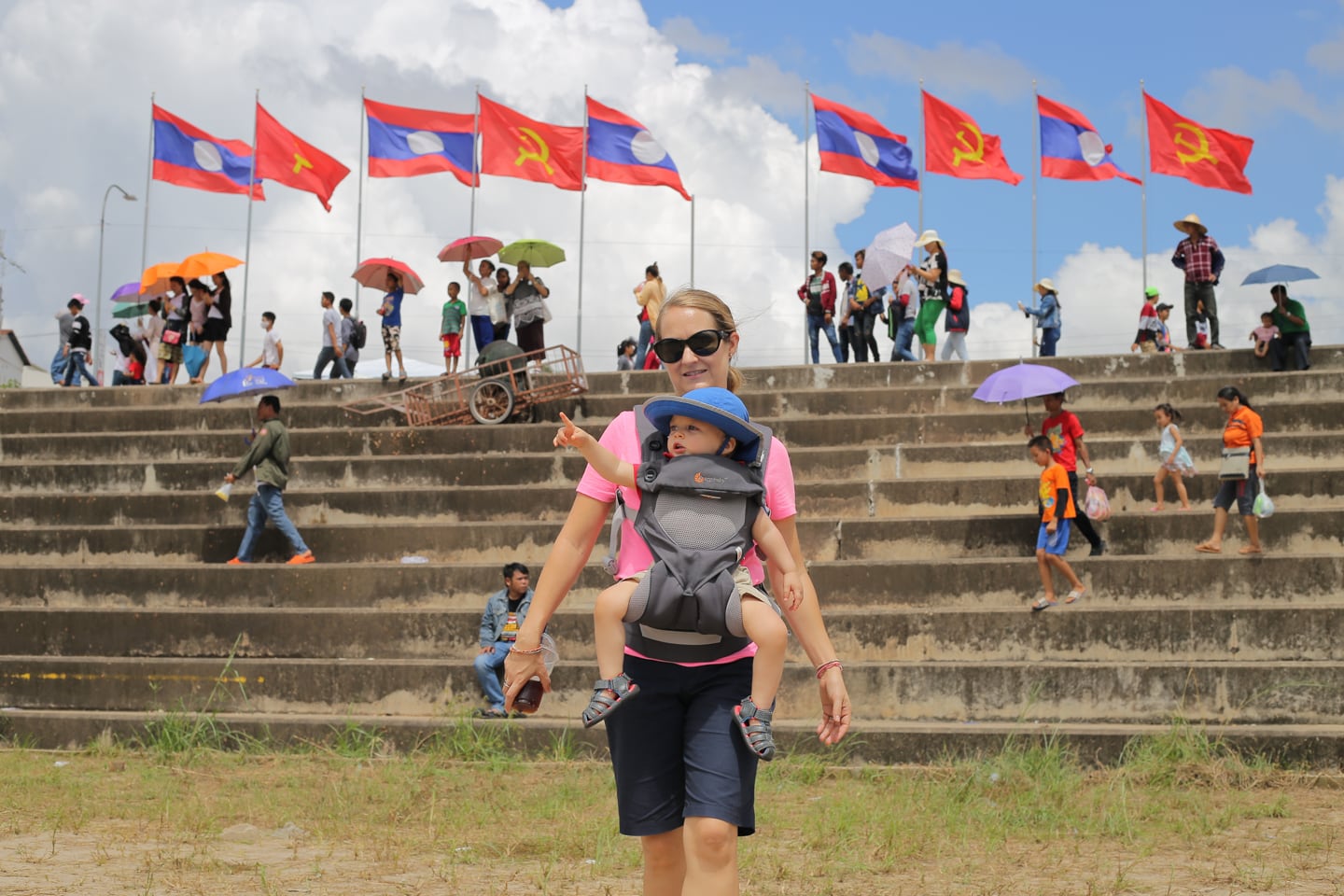 I’d like to say this is the moment in which Noe spots the racing boats for the first time. But really, he’s just excited about some little girl’s mylar balloon.

And now, for the main attraction. THE BOATS! 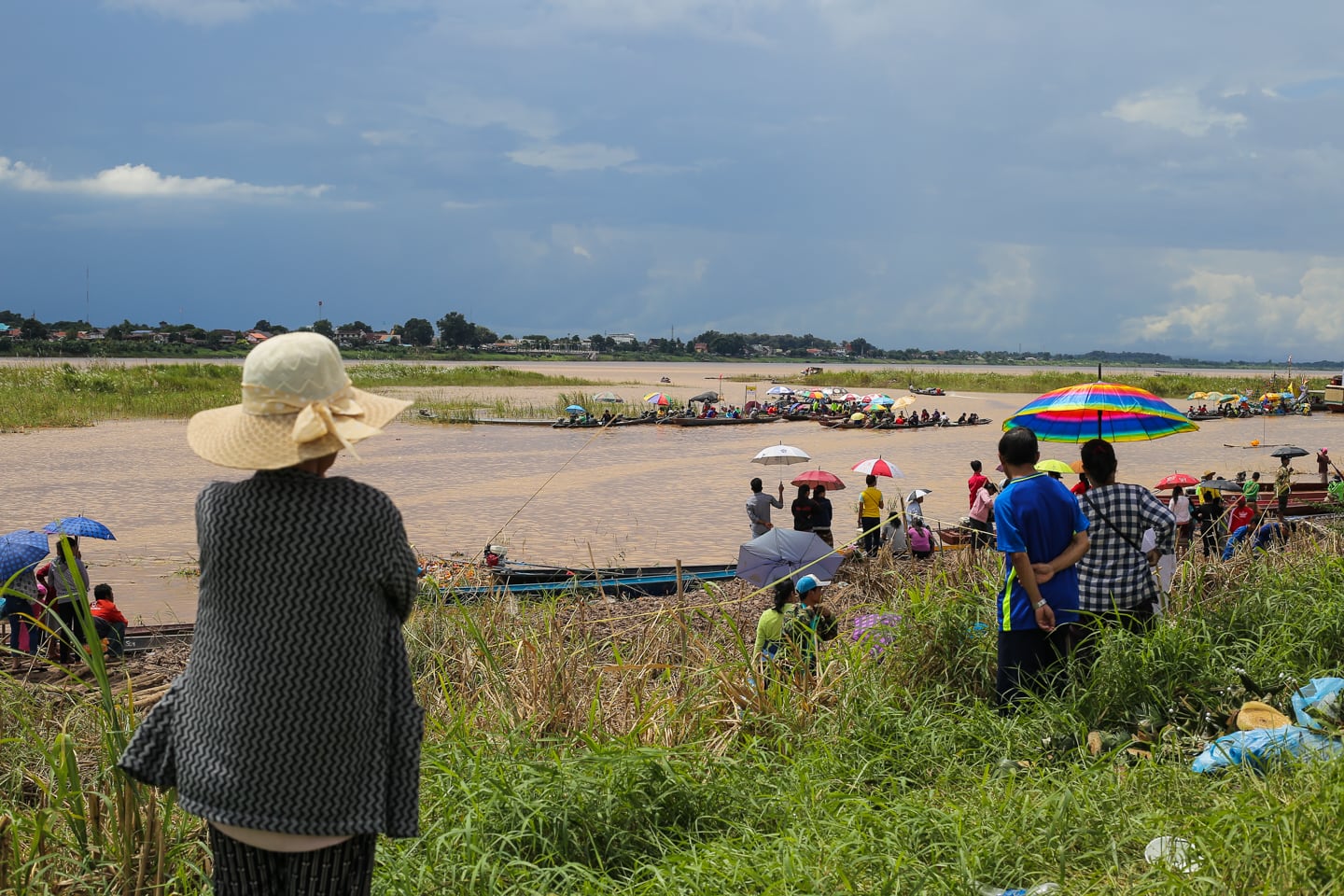 Well, not quite. But after parking a mile away and spending the last thirty minutes slowly creeping through the throngs down to the river, we’ve finally arrived at the center of the action. At this point, we’re just past the finish line. Moving northwest along the bank gets us closer to the action, but we’re less likely to get a clear view of the river through the umbrellas (mostly on account of the sun, but also in case of rain, which is still a real threat in this protracted rainy season). 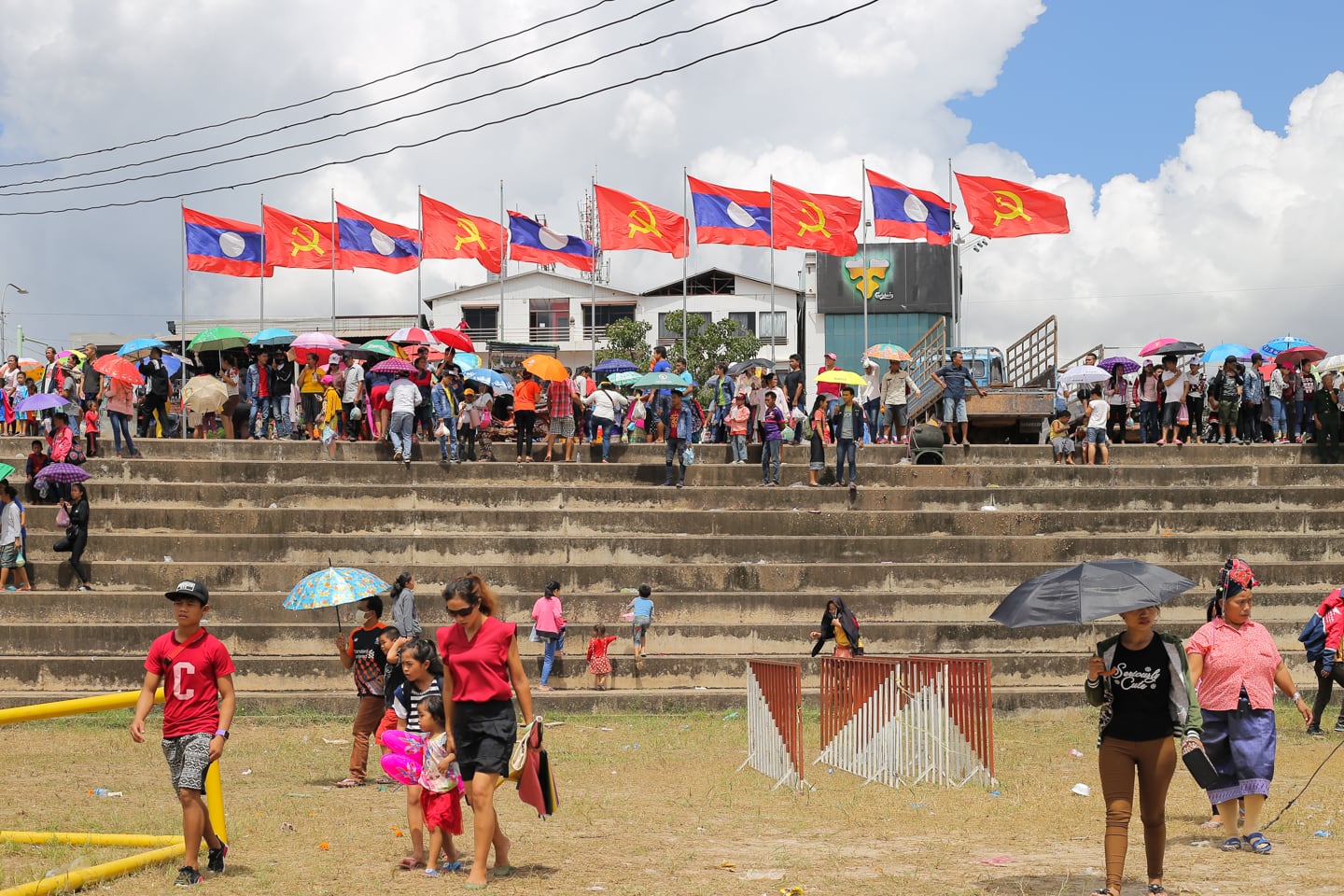 The first race of our time here ends, somebody shouts something indecipherable over a tinny loudspeaker and everyone goes nuts. GO…TEAM…UM…TEAM LAOS!? 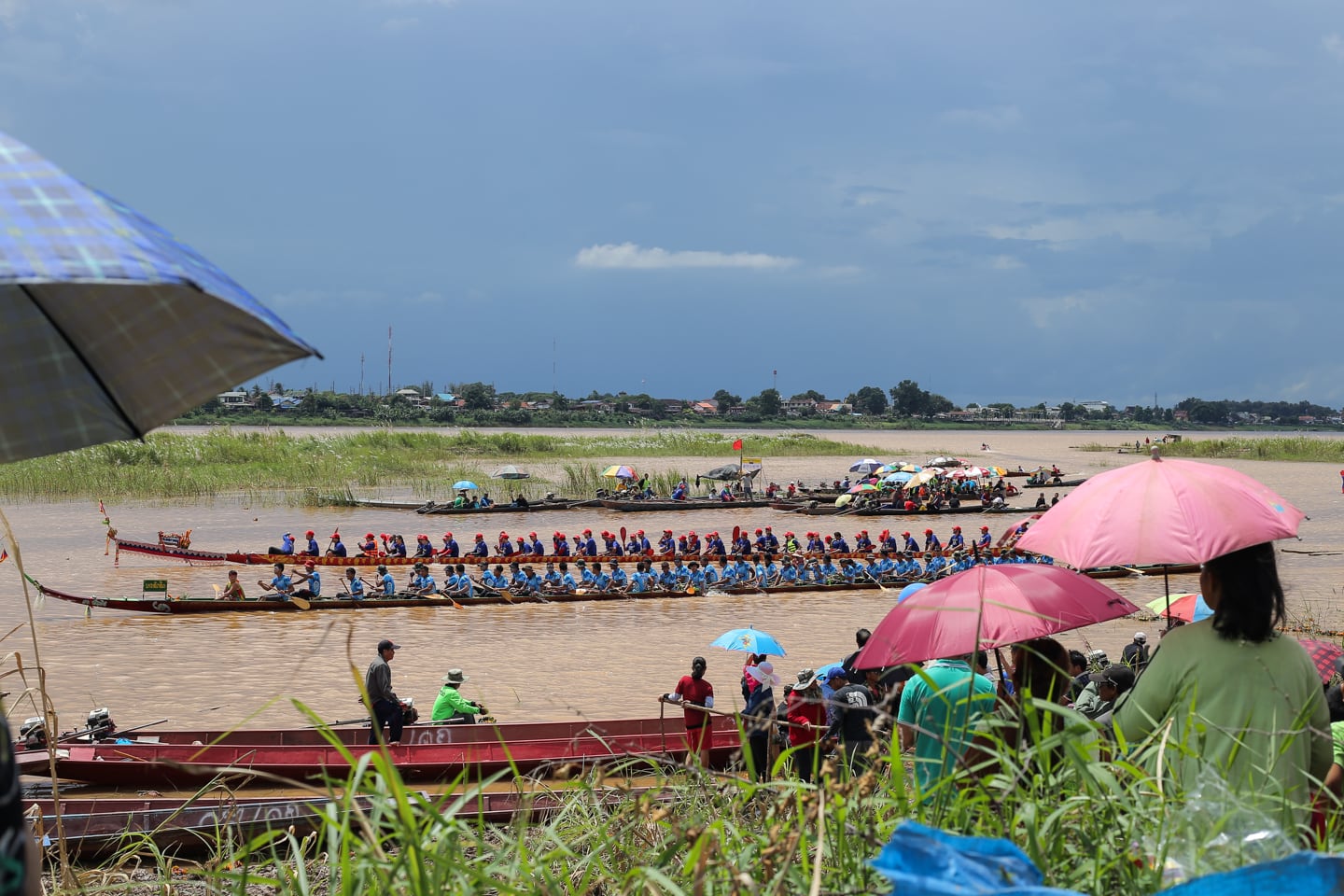 So, what’s with this Laos boat racing festival, anyways? Well, the boat racing we’re seeing today are the finals, apparently. These are the best of the best. In fact, boat races have been going on for a while all over the country, but not at the championship level.

It’s unclear how far the history of the Laos boat racing festival stretches back, but it’s apparent this tradition has been going on for some time.

Traditionally, after the hard work of the rice planting season is finished, villages along the rivers of Laos begin training for the upcoming festival. Teams of rowers are often sponsored by local beer or telecom companies, and also some larger organizations based in Vientiane.

On the day of the race, each household in the river community hosting the event contributes food and drinks. The presence of copious amounts of noodle soup (khao poon) is always a sure bet. After the meal, teams make their way to the river banging drums and singing. For the festival in Vientiane, much of this still happens, but on a much larger scale. 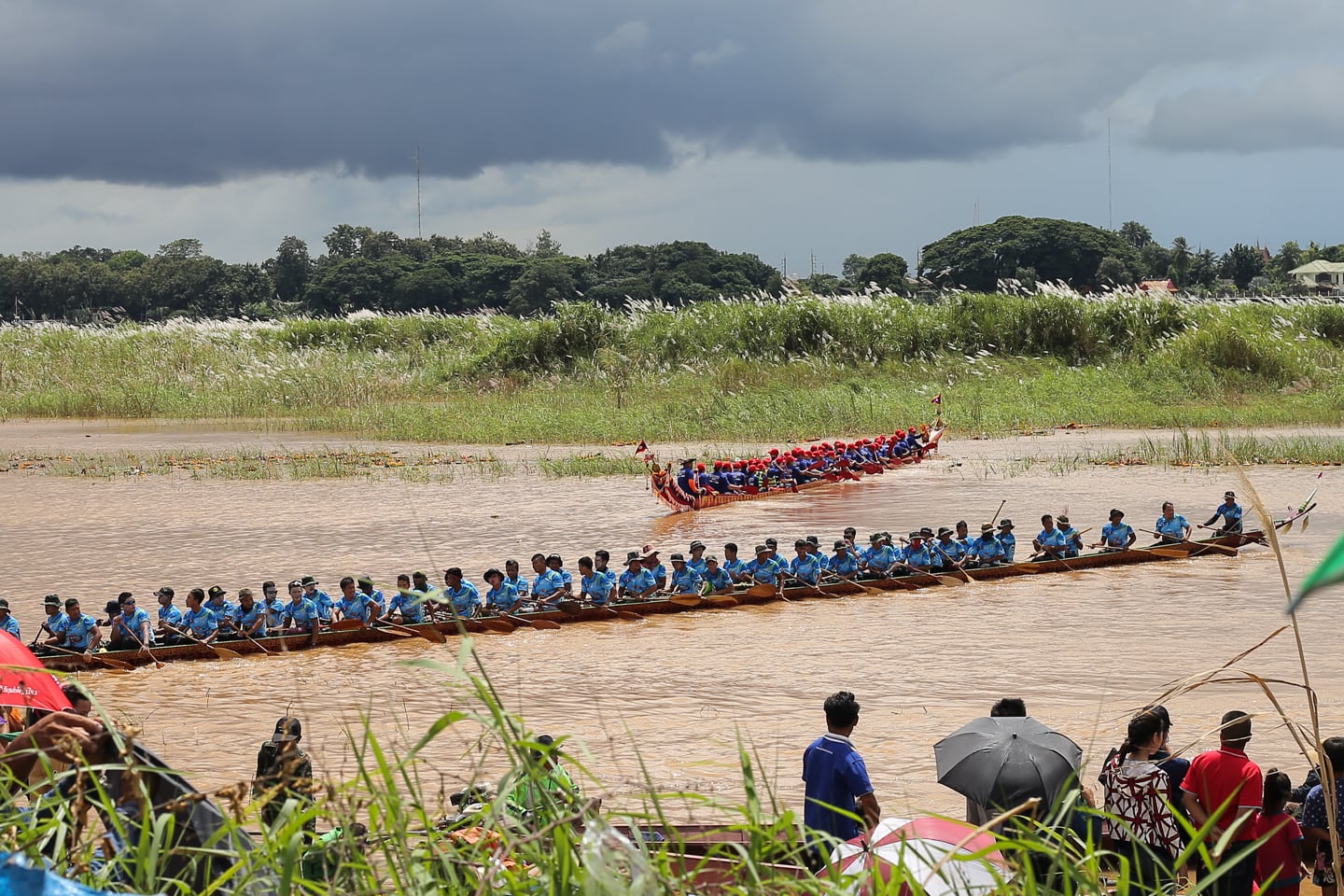 After braving the crowds and jockeying for position, we’ve found ourselves a prime spot in a small section of the Mekong steps that isn’t roped off for the VIP section or blocked by a million umbrellas, but unbeknownst to us, our luck is about to run out. 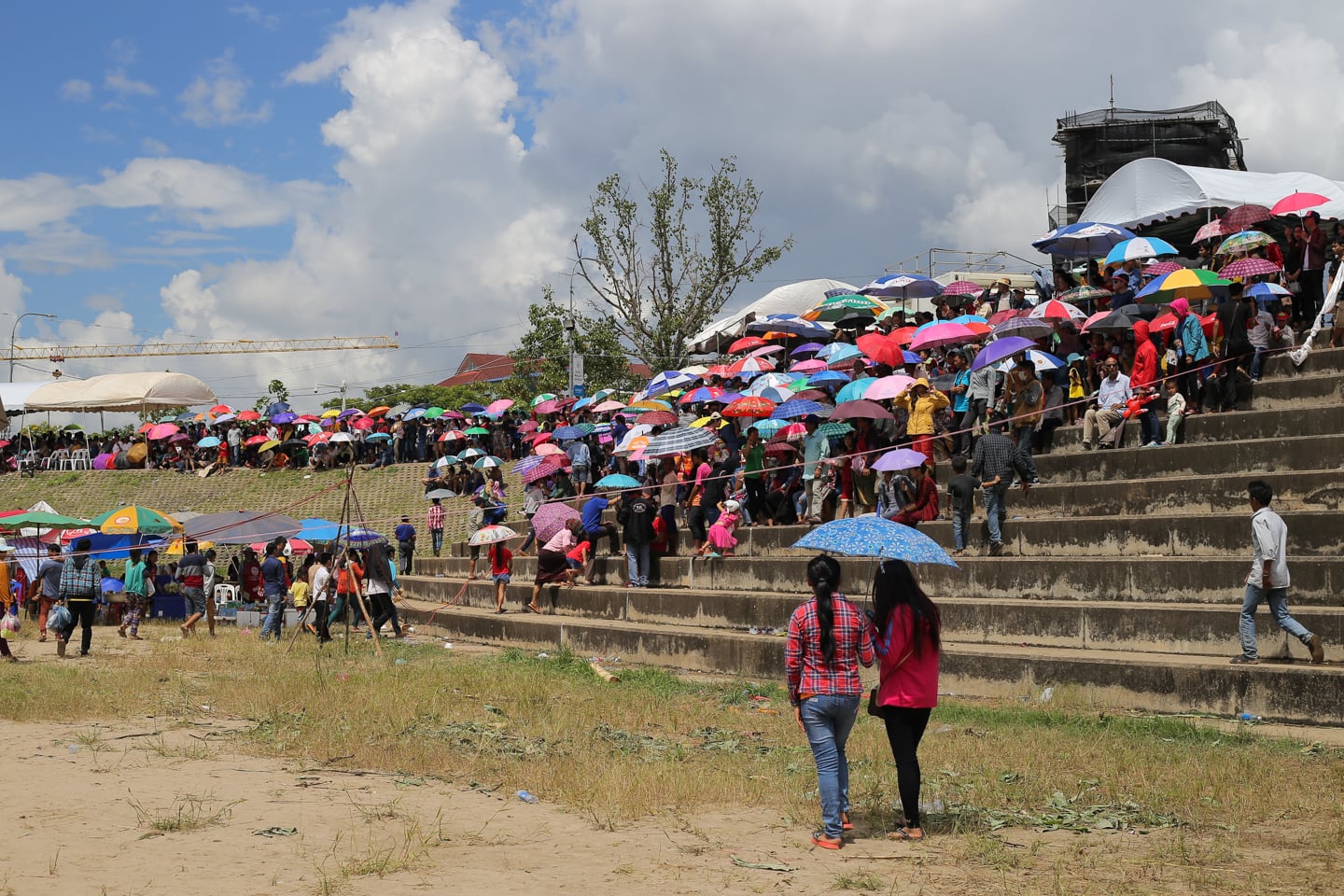 Minutes after settling in, Noe decides he no longer wishes to accommodate our schedule and basically goes Postal, taking no prisoners.

After ten minutes of desperately trying to fool ourselves into thinking we’re not the crazy falang with the raging, red-faced, mess of a toddler, we begin the long and tedious process of extricating ourselves from the mass of humanity around us that has only been growing since we took our seats.

A few minutes walking along the upper promenade, and Noe was out for the count.

True to form in times like these, he slept for an hour, through deafening music, cheering, thunder, and even firecrackers–all in 100-degree heat (38 degree Celsius heat index). 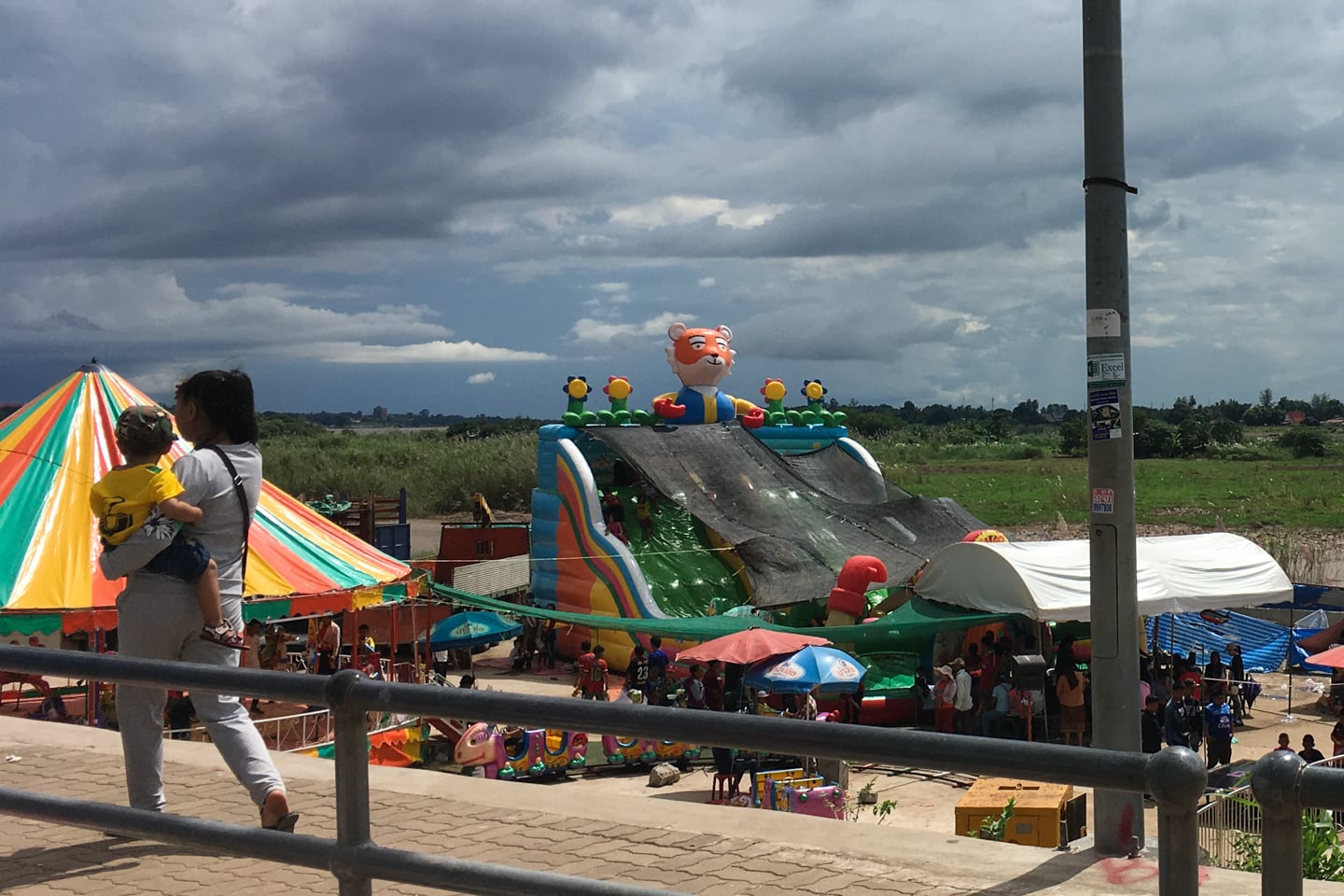 Fortunately for sliders, the carneys had the foresight to put up shade cloth over the giant inflatable slides–because, let’s face it–nothing ruins a boat festival quicker than a body-length heat burn from a bouncy slide in the tropics. 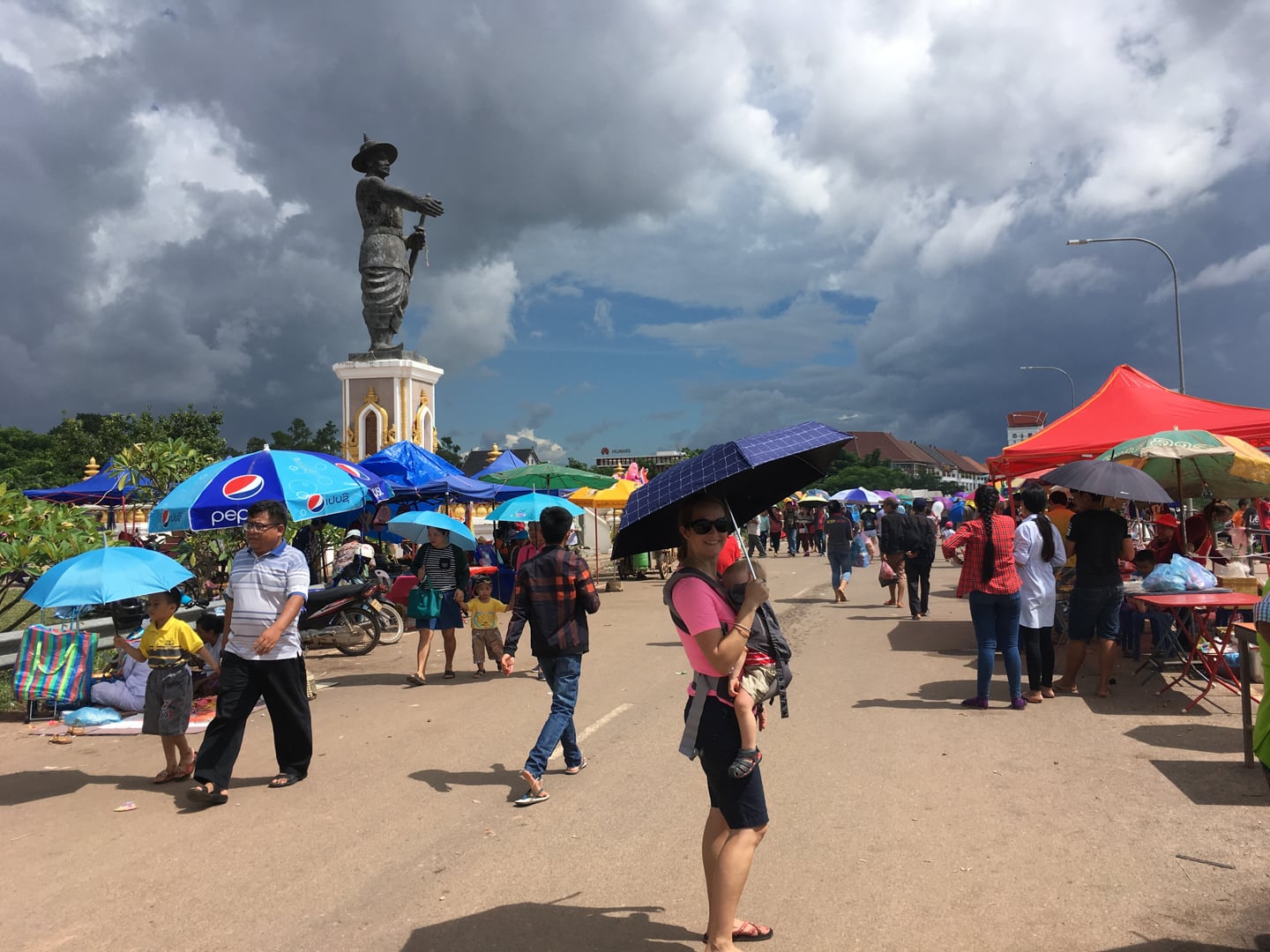 So, those were the finals of the Laos Boat Racing Festival. Is it worth the experience? Definitely. Just be prepared for a long, hot day, and don’t expect a one-year-old to share the level of excitement of the revelers around you.