A serendipitous encounter in Nairobi and many more fun encounters with exotic birds, wily monkeys and hungry, hungry hippos on the shores of Lake Naivasha!

Lori and I spent nine days in Kenya as part of a four-month backpacking trip through Southern and Eastern Africa. We spent three days in Lake Naivasha in November before heading on to Uganda for our final leg of the journey.

Three months into our Africa backpacking trip, we found ourselves at the Nairobi home of one of Lori’s childhood friends. Laura, who has worked for the Enough! Project and written for Newsweek, moved from Washington, DC to Nairobi four years prior, which turned out to be fantastic timing for all of us, given that we were looking for an apartment in DC for two years while I finished my Masters, and she was looking to retain and sublet her fantastic digs.

As soon as we bought the airline tickets to Africa, we were very excited at the prospect of getting to spend time with Laura at her home in Nairobi. Unfortunately, it was not to be, as Laura ended up in Argentina for a wedding during the same time. But her place was available for us if we found ourselves in Nairobi…which we most certainly did.

Coincidentally, Laura’s housemate in Nairobi, Lindsey, was also a friend of Lori’s from high school who just happened to be working in Kenya, and was going to overlap with us by a few days between work trips. So even though we wouldn’t get to see Laura, we’d get to see Lindsey, so it all balanced out.

During our stay in the Nairobi area, we decided to take a few days to visit nearby Lake Naivasha. I had planned on visiting Naivasha when I was in Nairobi three years ago but ended up heading to Lamu instead. Certainly no regrets there, but since Lamu was not in the cards this time around, Naivasha became a must see on our “itinerary.”

Getting to Lake Naivasha by Public Transport (i.e. Matatu)

It took us three separate matatus to get to Camp Carnelleys, but the trip was actually pretty straight forward and not too stressful. The most challenging part of it all was finding where the first matatu left from central Nairobi. I believe we finally found the correct stand on Latema Road near Savini’s Book Centre. It was a Nakuru-bound express matatu, which let us off on the A-104 highway at the road into Naivasha town, where a mini matatu was waiting to ferry passengers to the Naivasha center matatu stand. From there, we caught our third and final matatu along Moi South Lake Road. We notified the driver to let us off at Camp Carnelleys, and were dropped off at the front entrance. The same transport scheme can also be used for reaching most of the way to Hell’s Gate National Park. It all sounds more complicated than it actually was. If you’re comfortable with public transport in East Africa, it was really a piece of cake, cost under US$10 for the two of us, and was much more tame than similar trips in Uganda or Tanzania.

Travel Tip: On your way out of Nairobi, try to get a seat on the left-hand side for jaw-dropping views of the Great Rift Valley before reaching Naivasha town.

We were very pleased with our stay at Camp Carnelleys (or Carnelley’s Camp as it’s sometimes written). I absolutely love those places that cater to all budget levels with nice communal amenities accessible to everyone…unless, that is, you find yourself trapped in a public transport desert and forced to pay exorbitant prices for basic needs, which was certainly not the case at Carnelleys.

We stayed in one of their Twin Rooms with shared shower/toilet facilities for about US$27 per night, and spent an average of US$10 for breakfast and US$15 for dinner for the two of us in November 2014.

For us, the weather was just about perfect through the duration of our stay: Clear to mostly sunny skies, with perfect temps around the clock, heating up to mid to upper 80s in the mid afternoon. 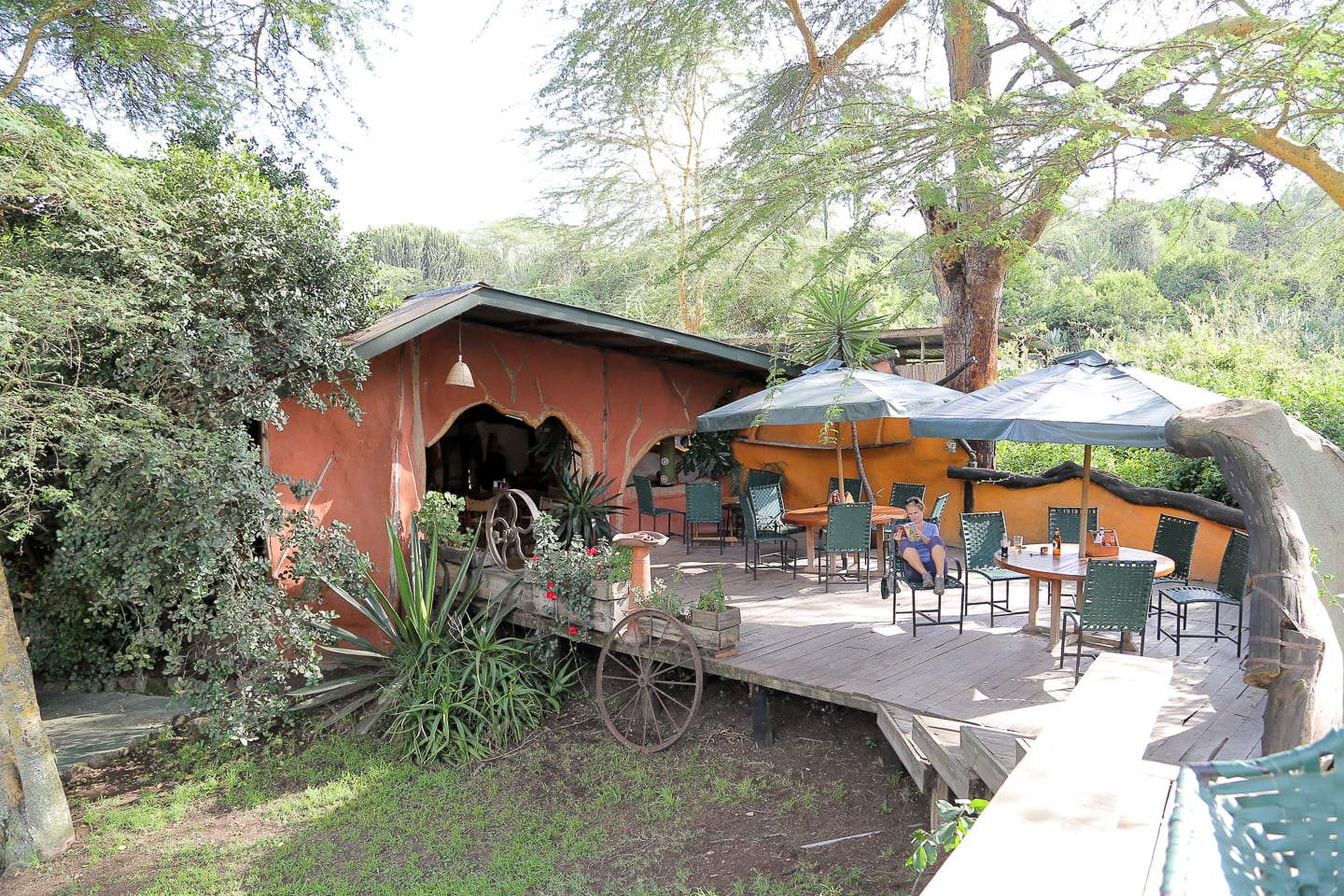 Camp Carnelleys is a family-run “campsite” (in U.S., we’d probably call Carnelleys a rustic lodge or resort) situated right alongside the lake shore on a very large and well-tended property offering perhaps the greatest diversity of birds of any place we’ve ever stayed. In addition to birds of all shapes and sizes, there were monkeys (Colobus and Vervet), lizards and, of course, Naivasha’s famous man-eating hippos! Though it’s worth noting that, unlike their friendlier brethren roaming the camp, the hippos were kept out by an electrified fence. 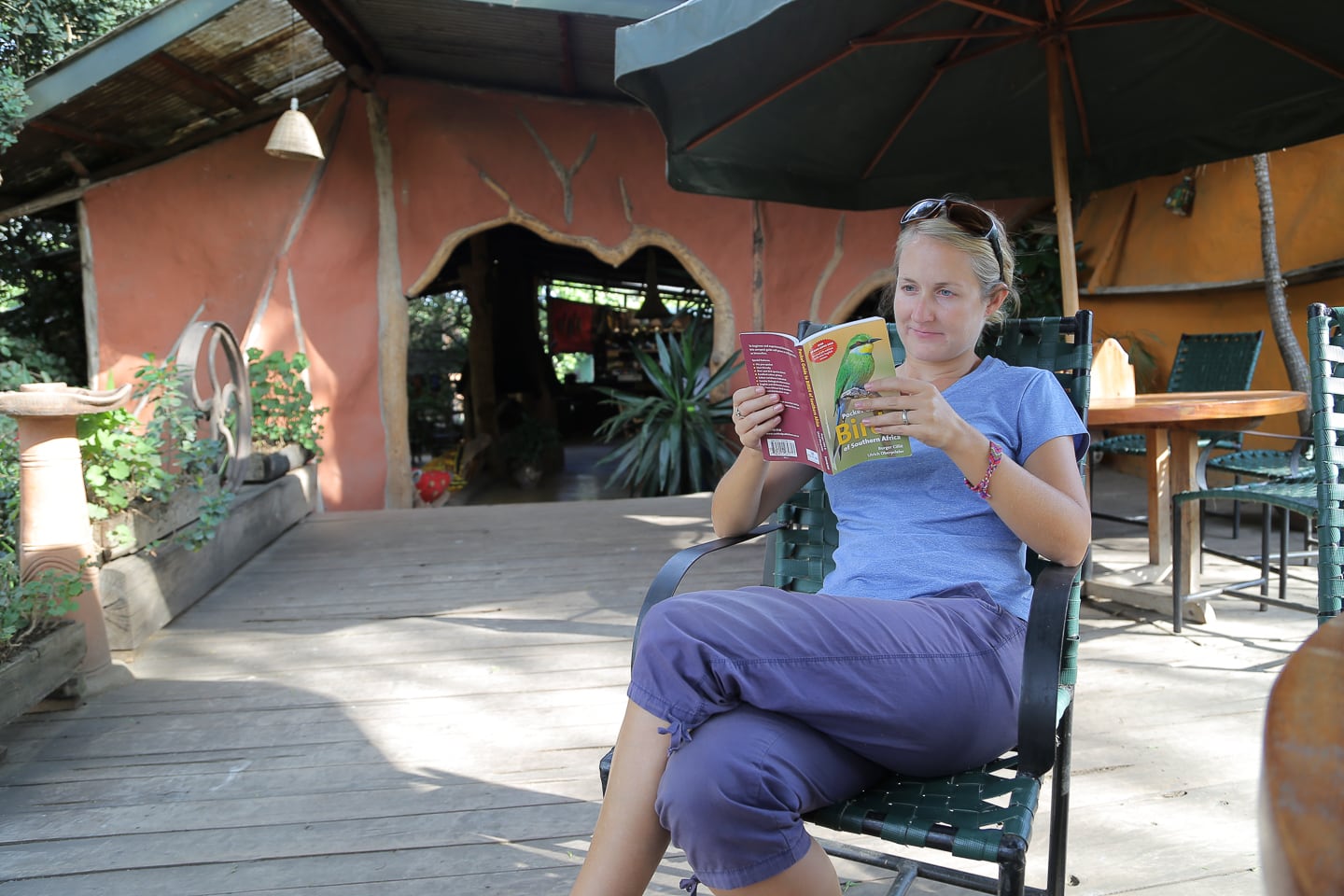 Birdwatching on the Shores of Lake Naivasha

We finally broke down and bought a bird book half way through South Africa. While the book was oriented towards Southern Africa, much of the information was still pertinent to Kenya, as Southern and East Africa share many species (or derivatives of the same species). For example, the book might only have a picture of a Knysna Turaco from South Africa, but Fischer’s Turaco found in Kenya has the same distinctive look. 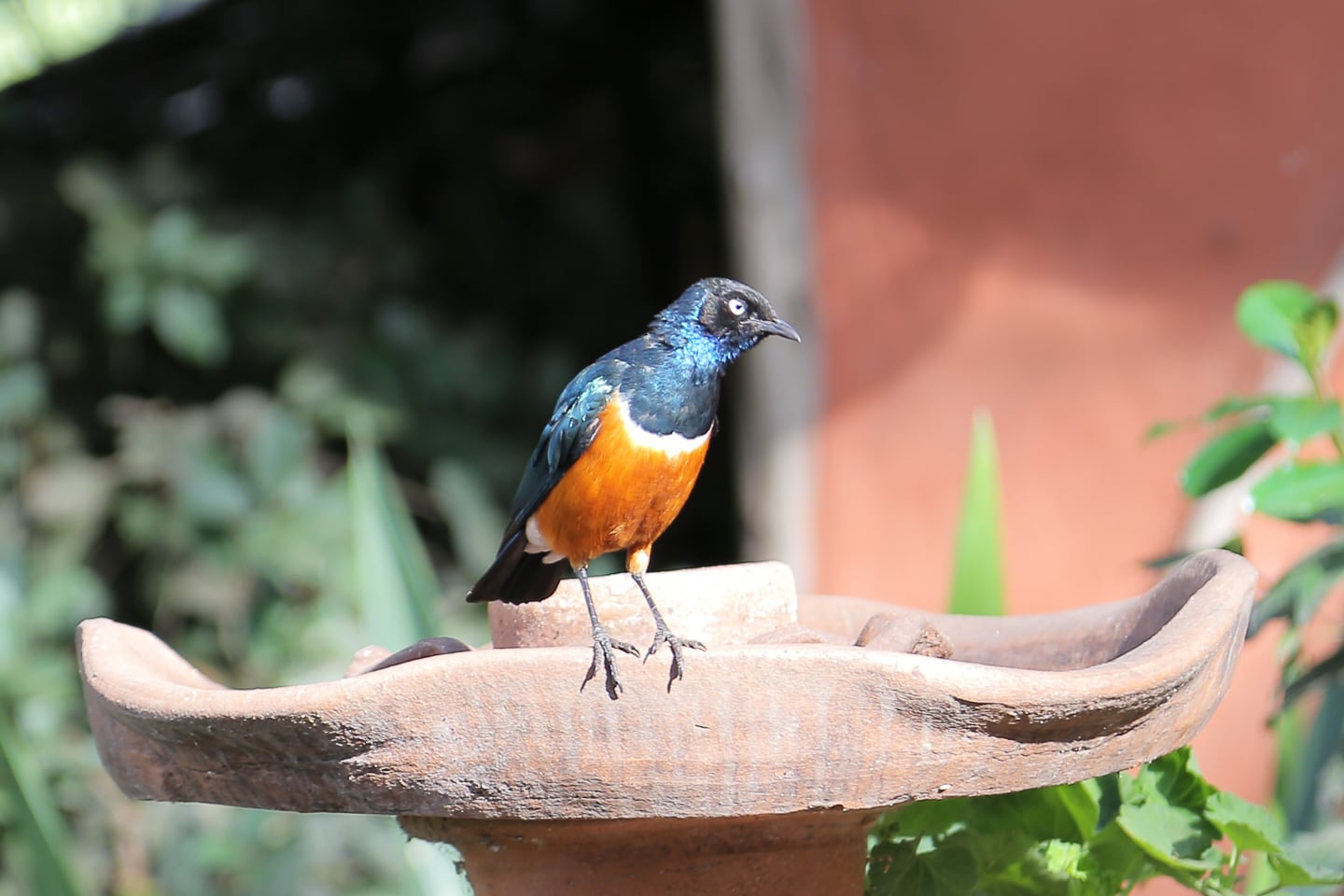 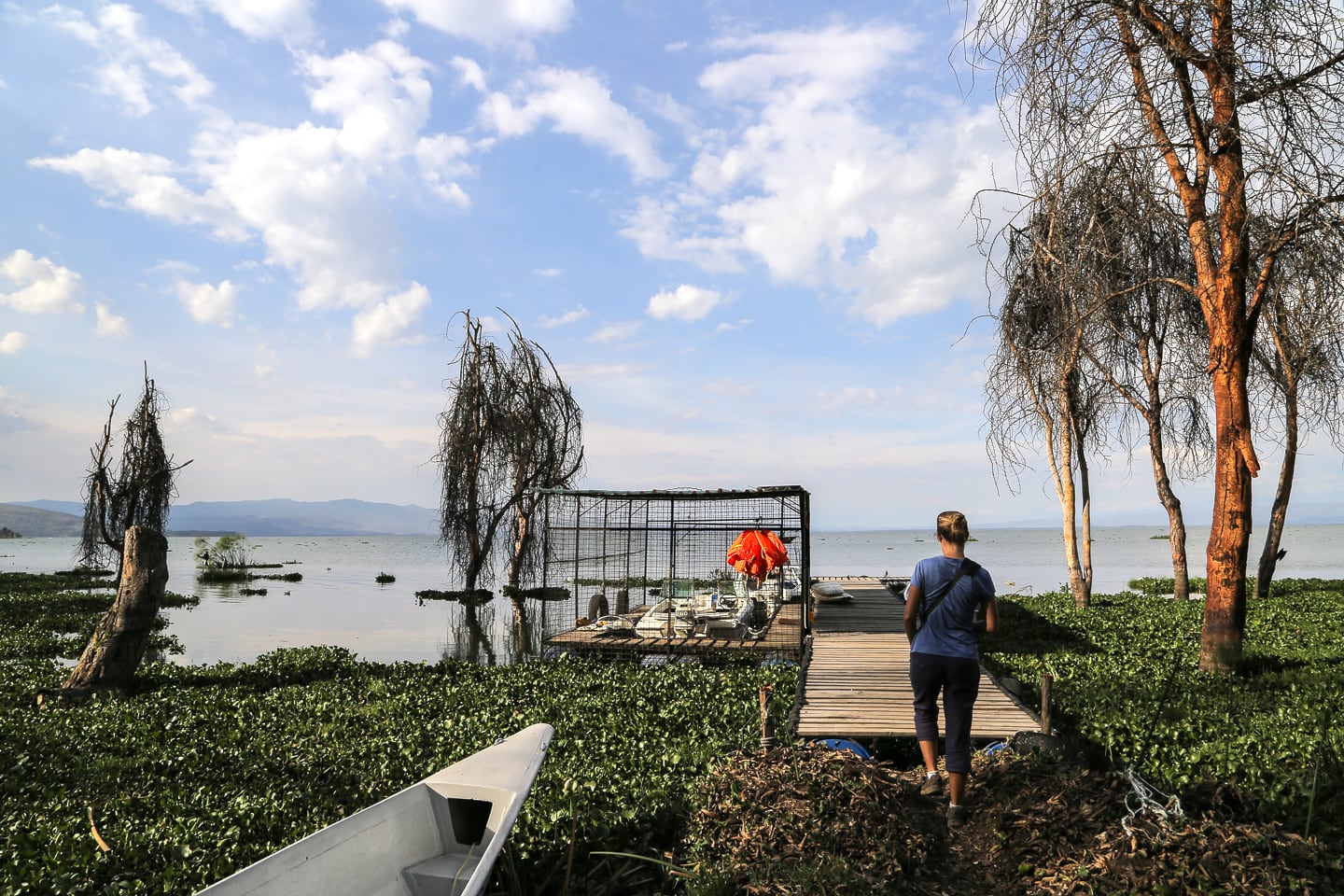 The camp has its own dock on the lake, where you can go to watch waterfowl or take your chances with Naivasha’s resident hippos. We never felt threatened by the hippos, as they seemed to congregate far from the dock, but you’d probably want to keep a watchful eye for a particularly territorial hippo. 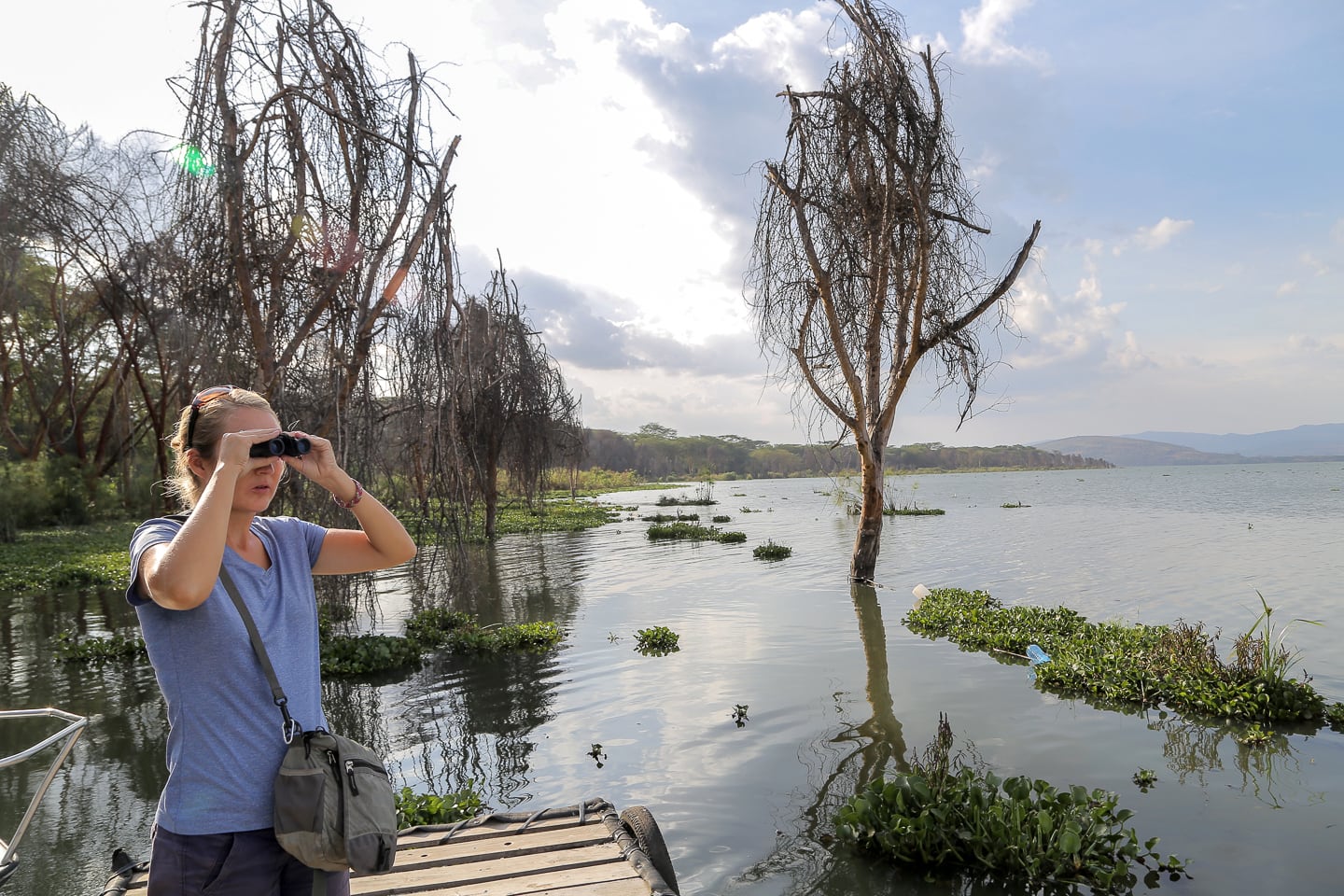 It’s important to note that hippos are actually herbivores, subsisting primarily on grass. They are not natural meat eaters (their digestive track is not set up for such things)! If a hippo attacks (and/or kills) you, it is most likely out of fear/aggression and NOT hunger. It is true that hippos kill more people in Kenya each year than lions or crocodiles. However, your still far more likely to be killed by a mosquito than any one of these guys. Just saying… 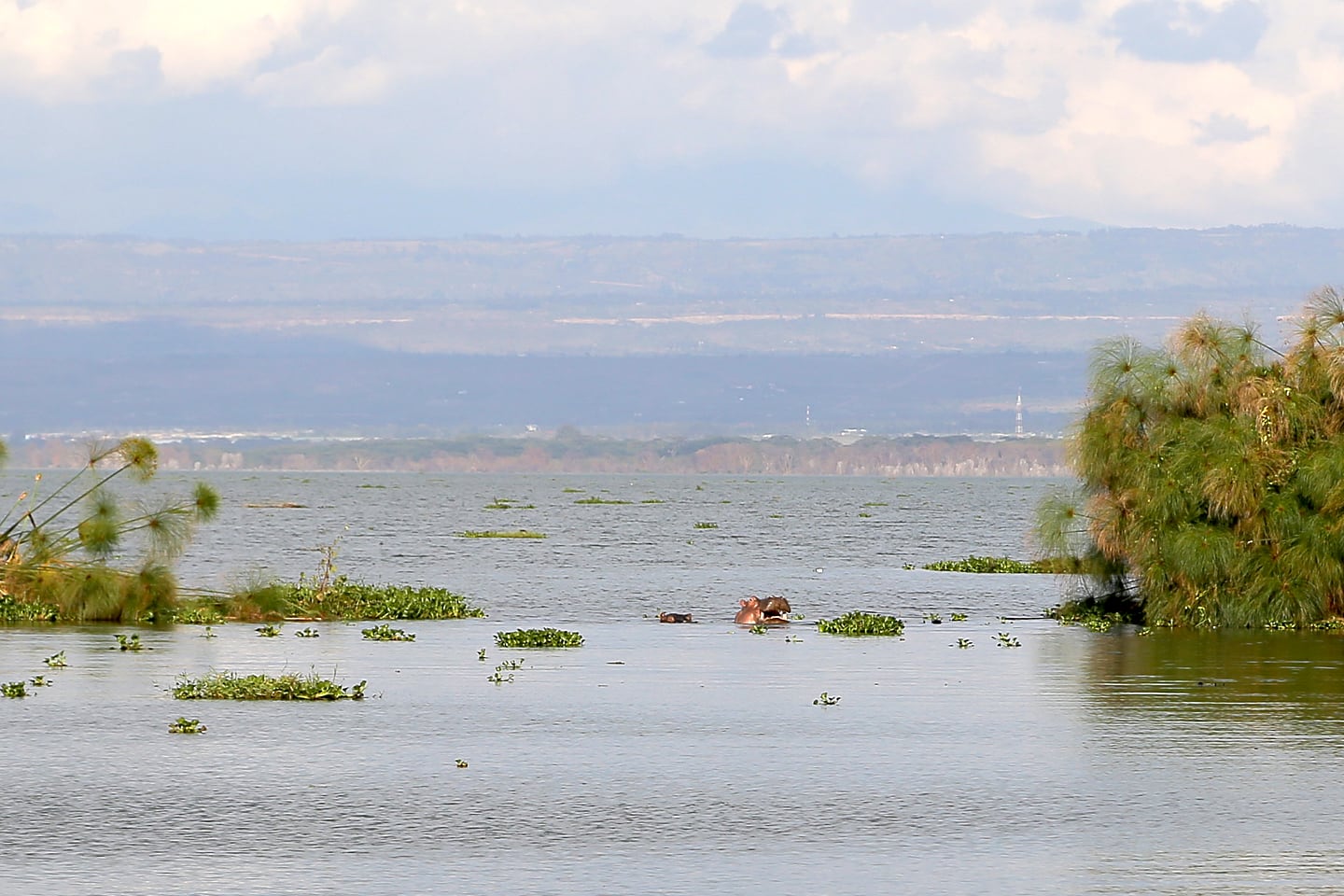 In the evening, a group of hippos seemed to like hanging out in this particular spot, about a hundred meters from Carnelleys dock. 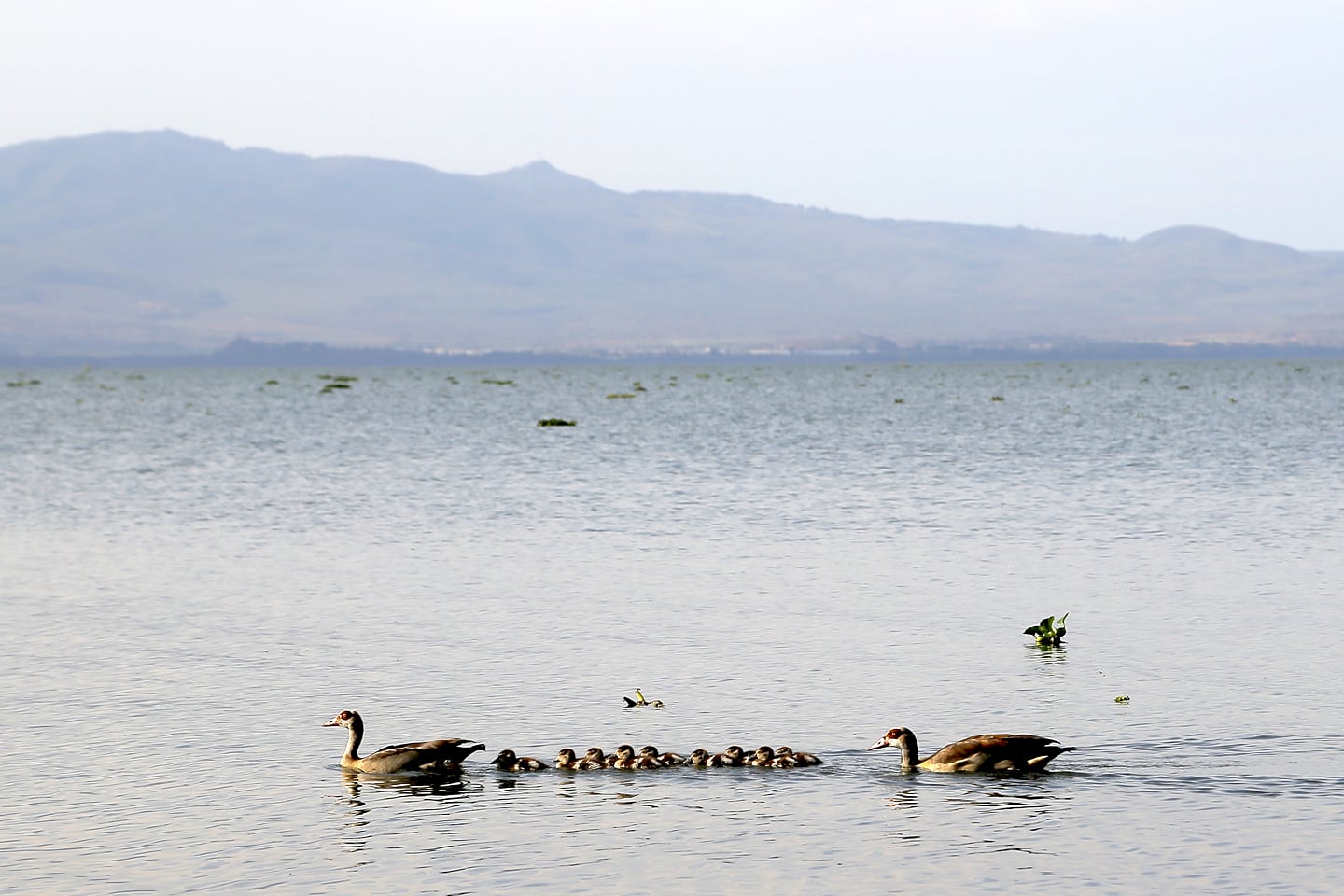 And to underscore that hippos really have little interest in meat, we saw this family of geese swim within inches of the hippos a half dozen times, never once eliciting any sort of interest from the gigantic beasts. 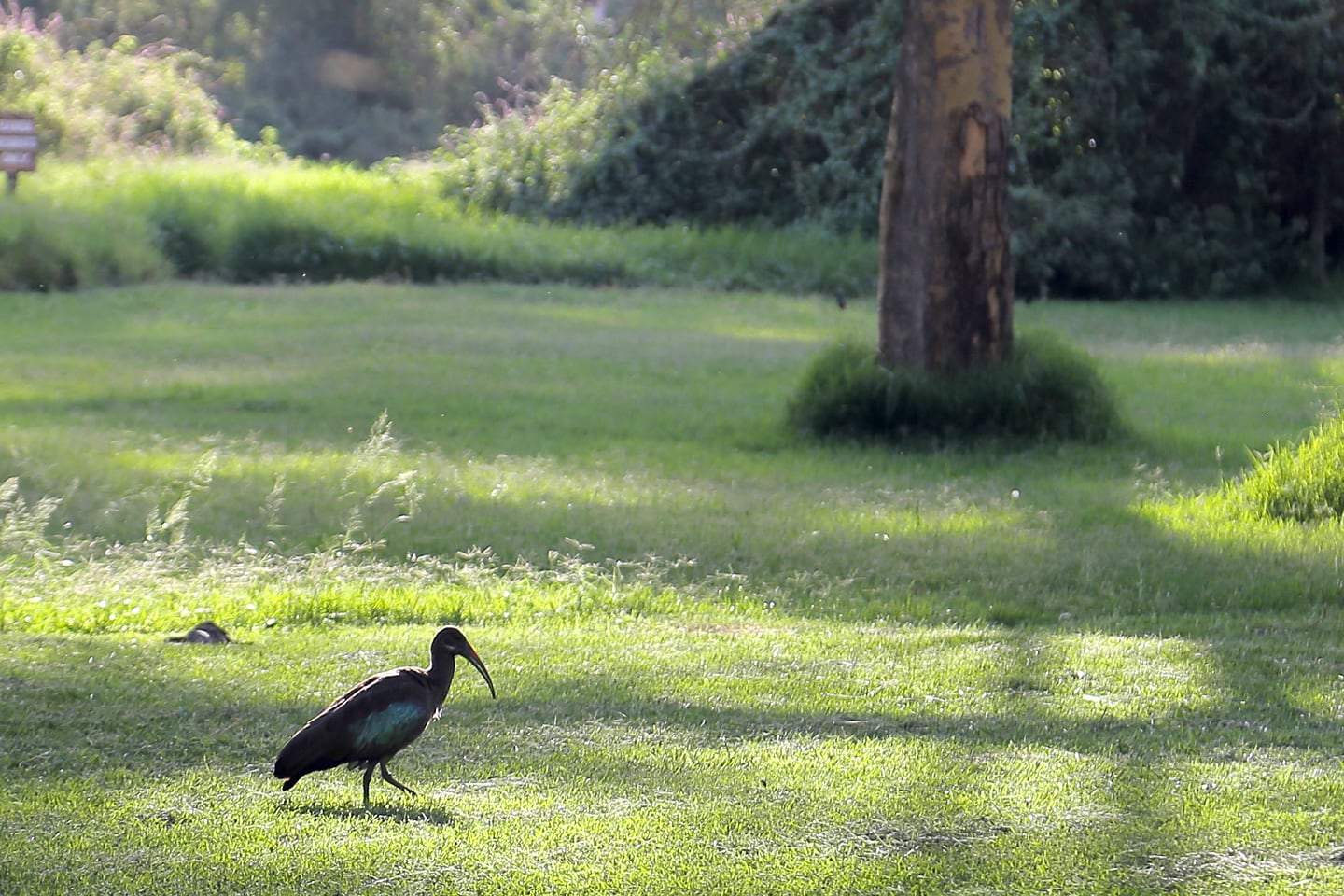 A Hadada Ibis (bostrychia hagedash) struts his stuff poking around for his next meal. 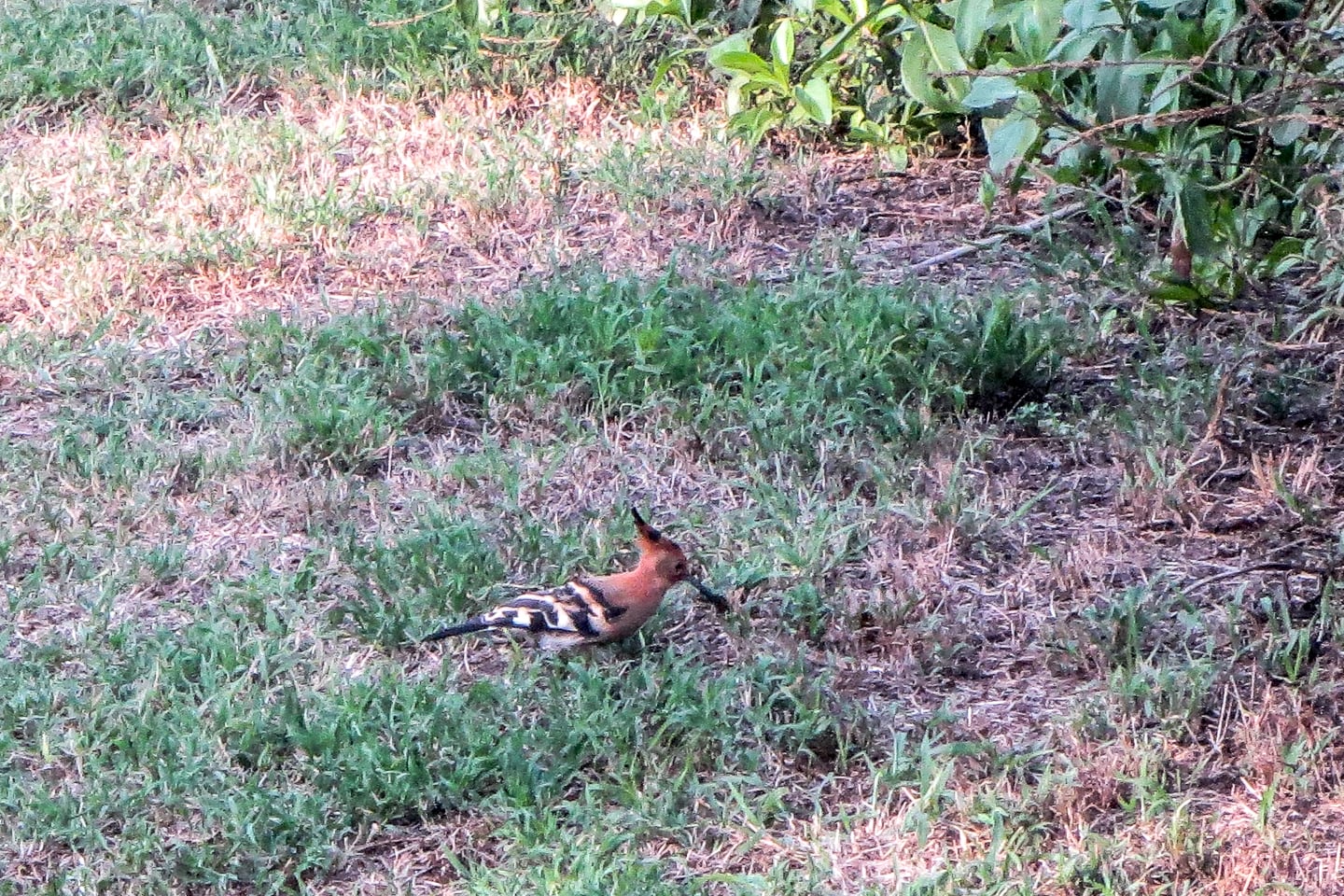 One of our highlights of our time running around trying to spot birds on Lake Naivasha was coming across the little guy, a Hoopoe (upupa epops). We only saw one and only had a matter of seconds to snap the photo. 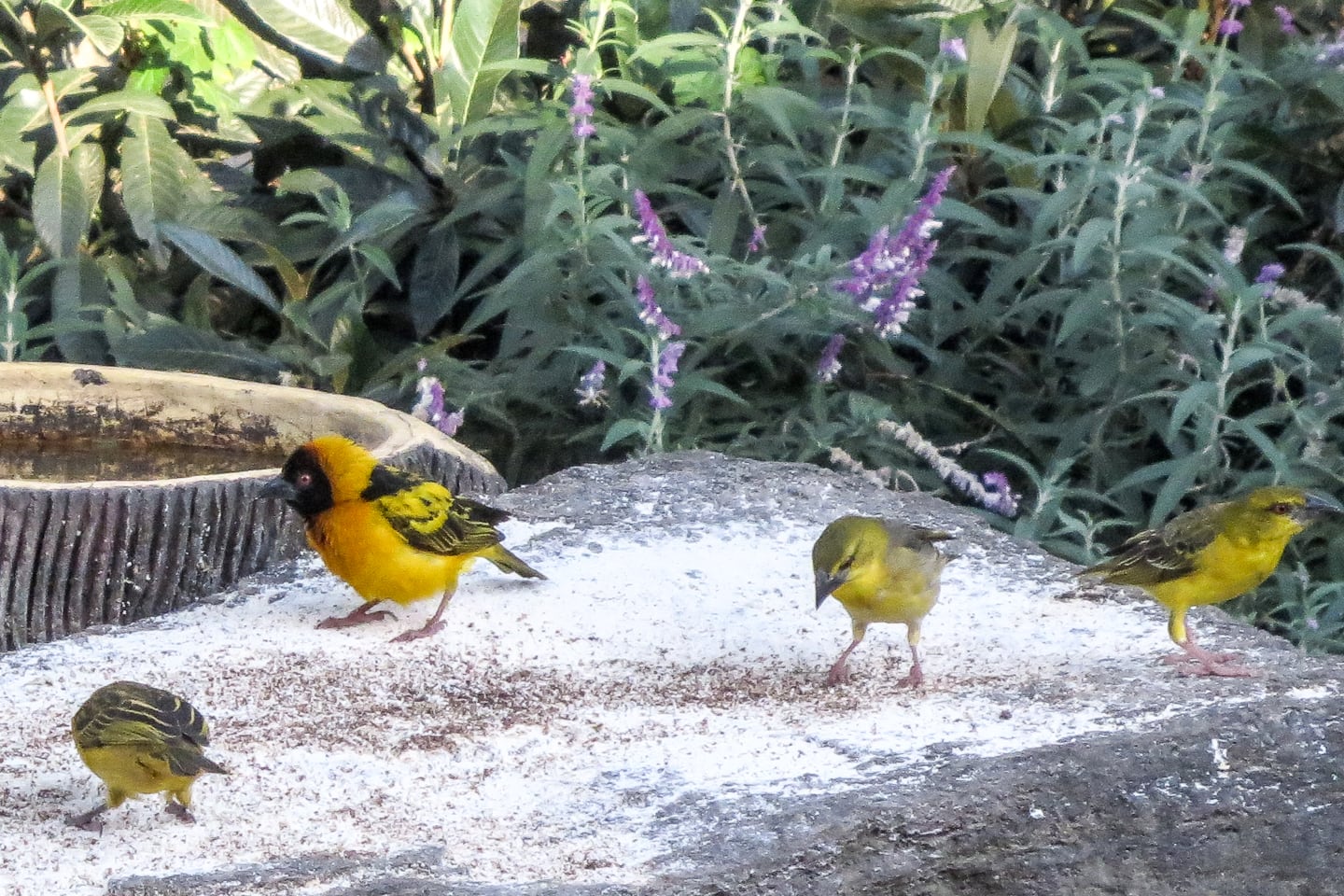 If you come up short on your bird search around the rest of the camp, your guaranteed to see a number of colorful birds on this feeding rock located within view of the restaurant’s outdoor dining area. We regularly saw Lesser Masked-Weavers (ploceus intermedius) and these other birds which I have not been able to identify… (UPDATE: Shirley and John M., loyal readers and family friends, believe that they are most likely the juvenile or female Lesser Masked-Weavers; if indeed the latter, this dude is quite the ladies man…er, bird.) 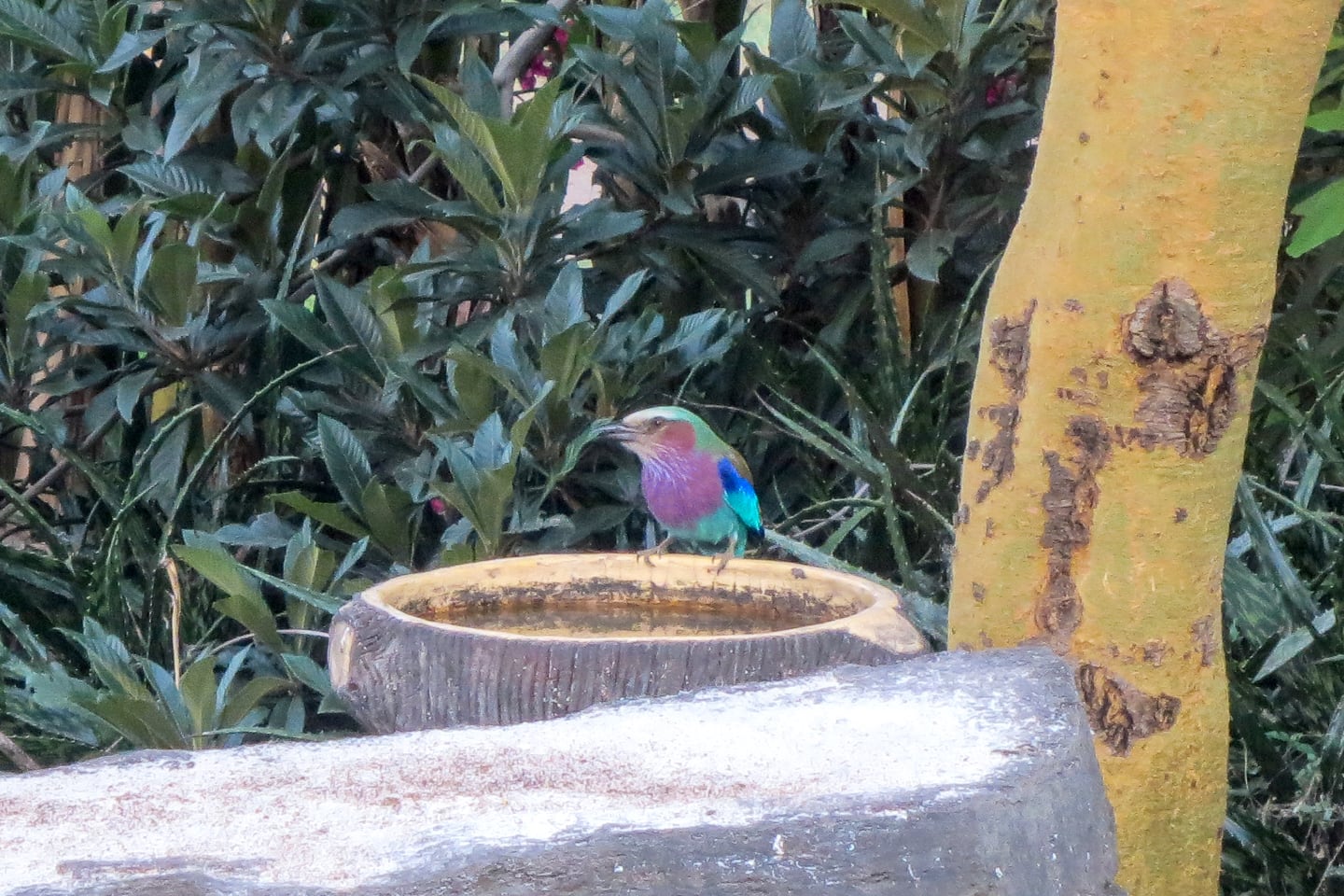 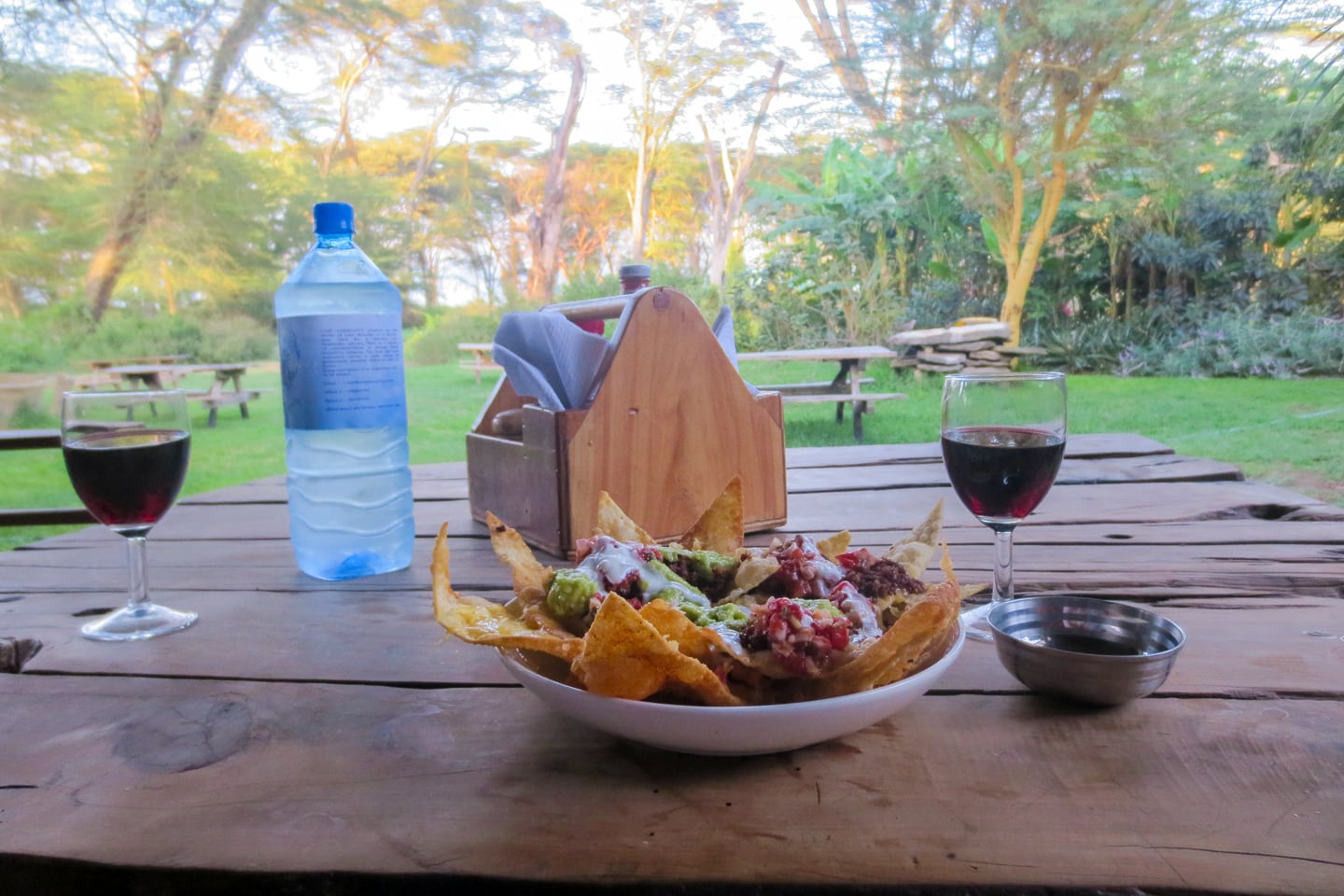 …and a delicious meal of homemade nachos and wine. Evenings really don’t get much better than this! 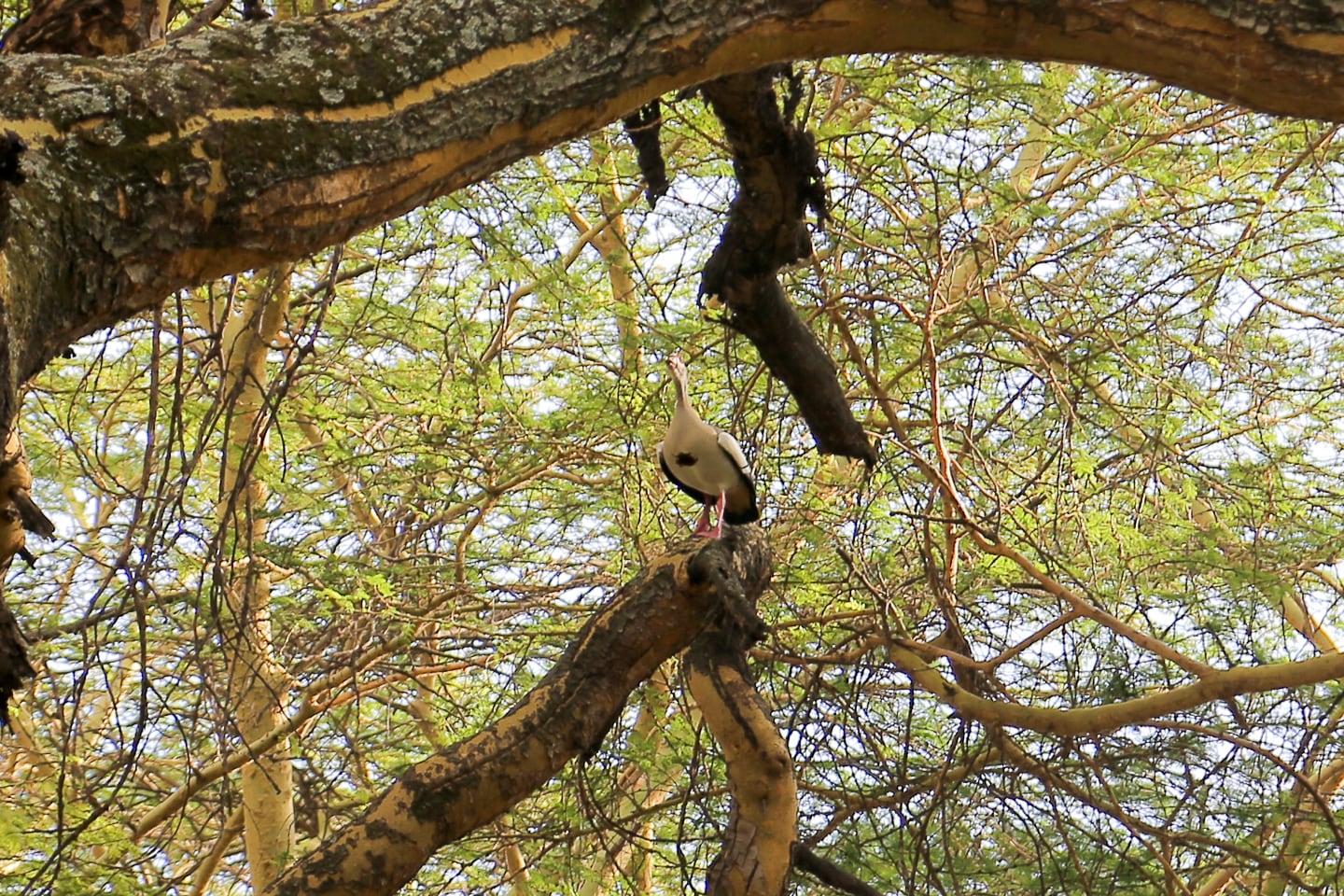 This goose enjoyed making a racket around sunrise every morning, but generally moved on to greener pastures once we were up and showered. Thanks a lot, goose. 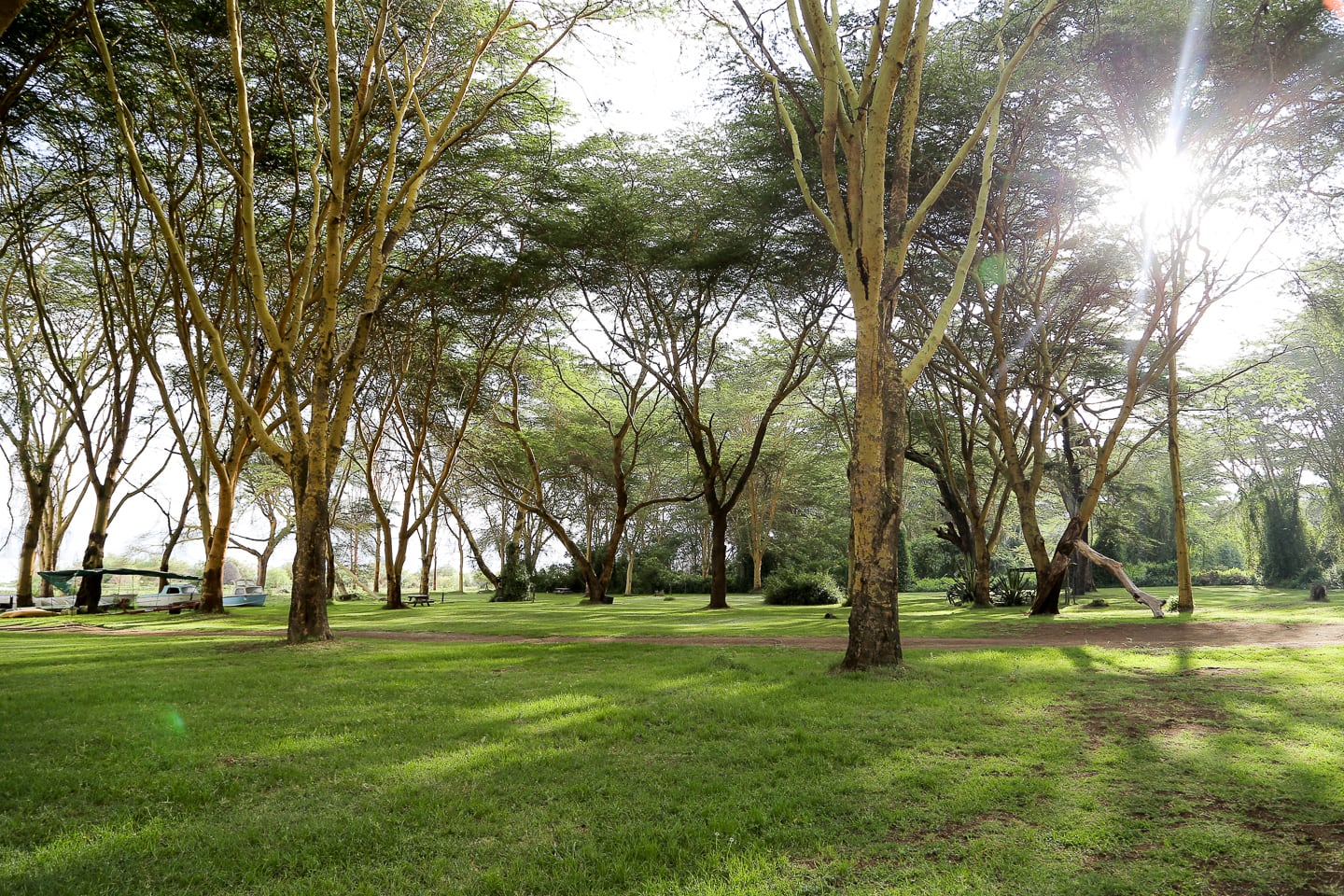 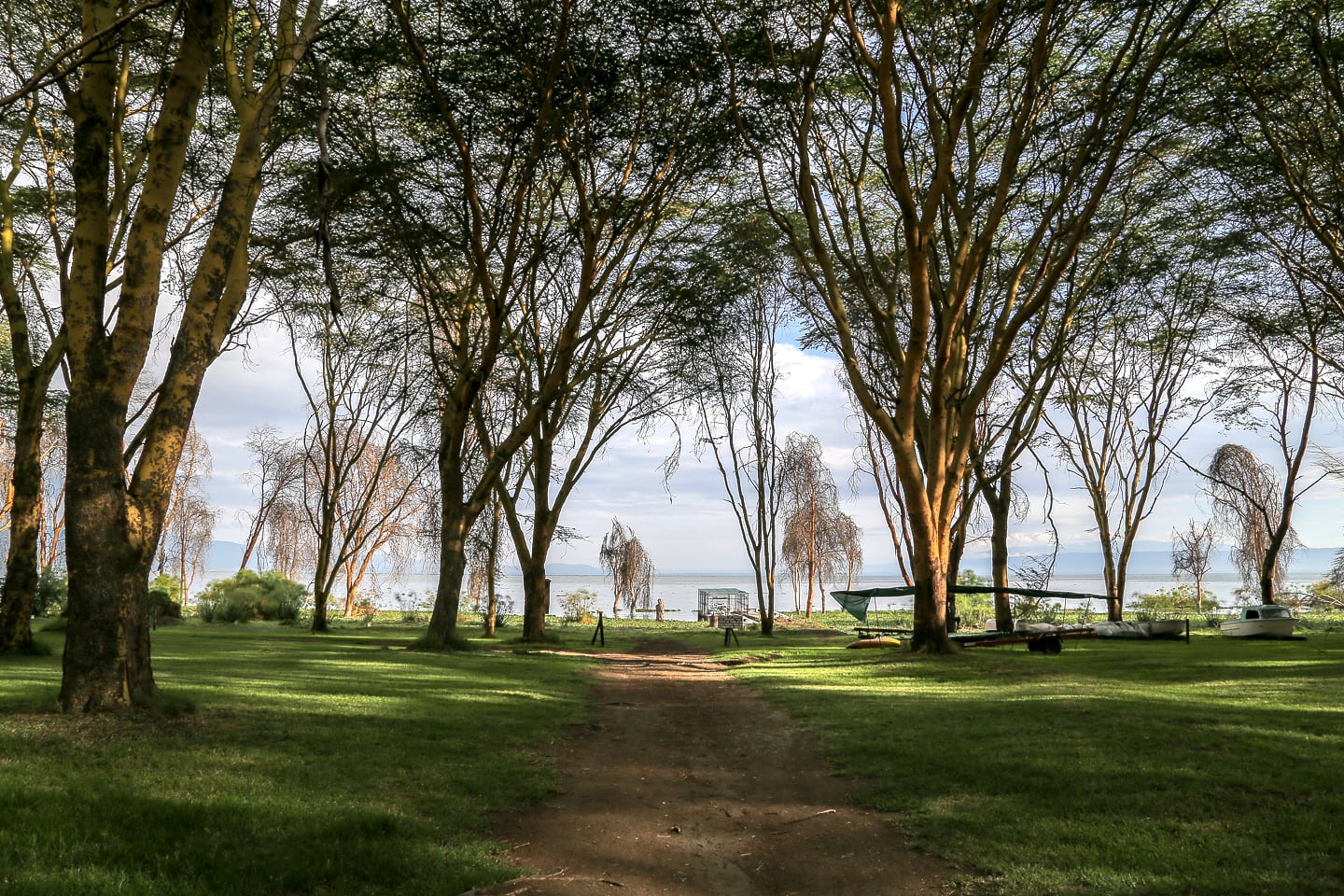 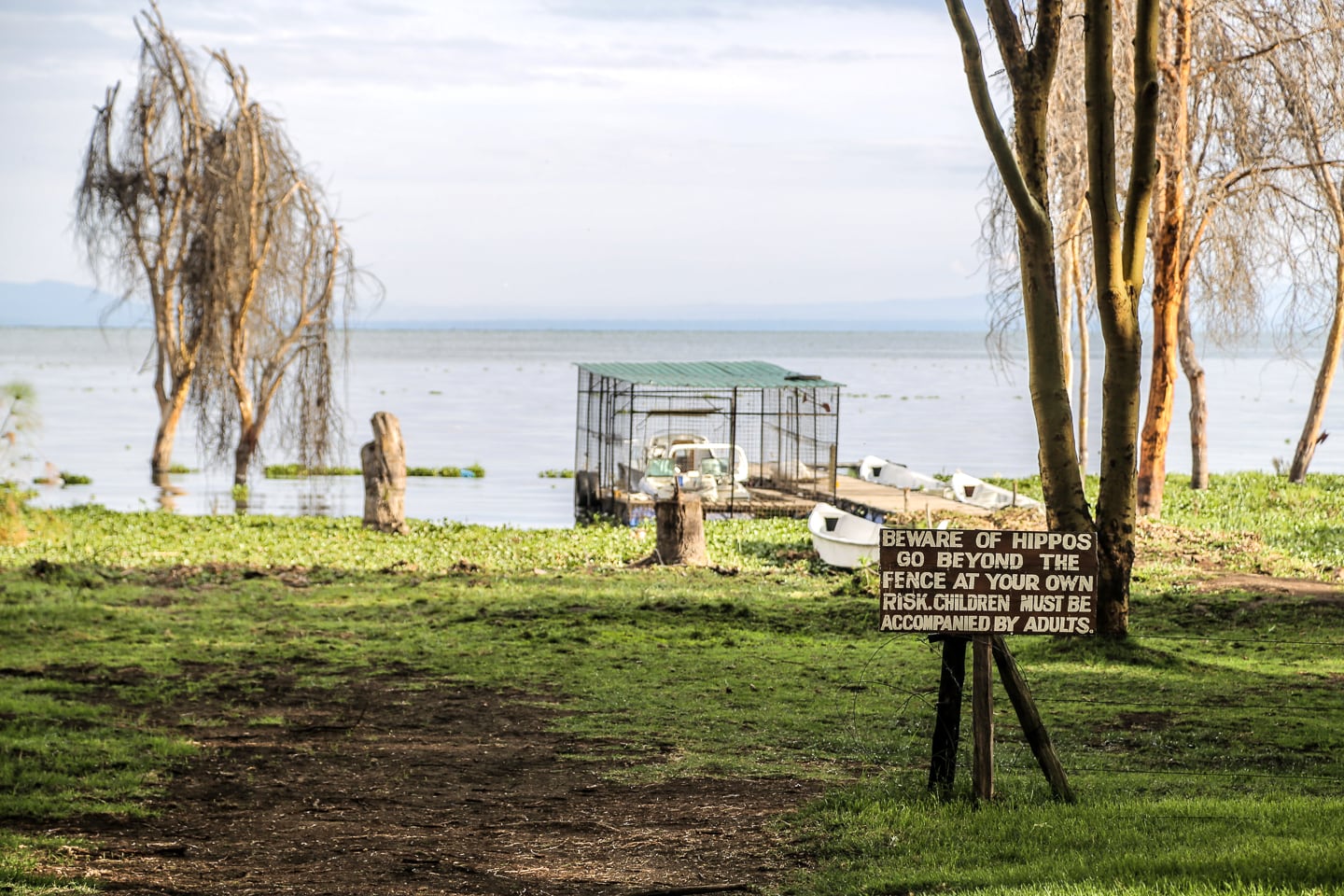 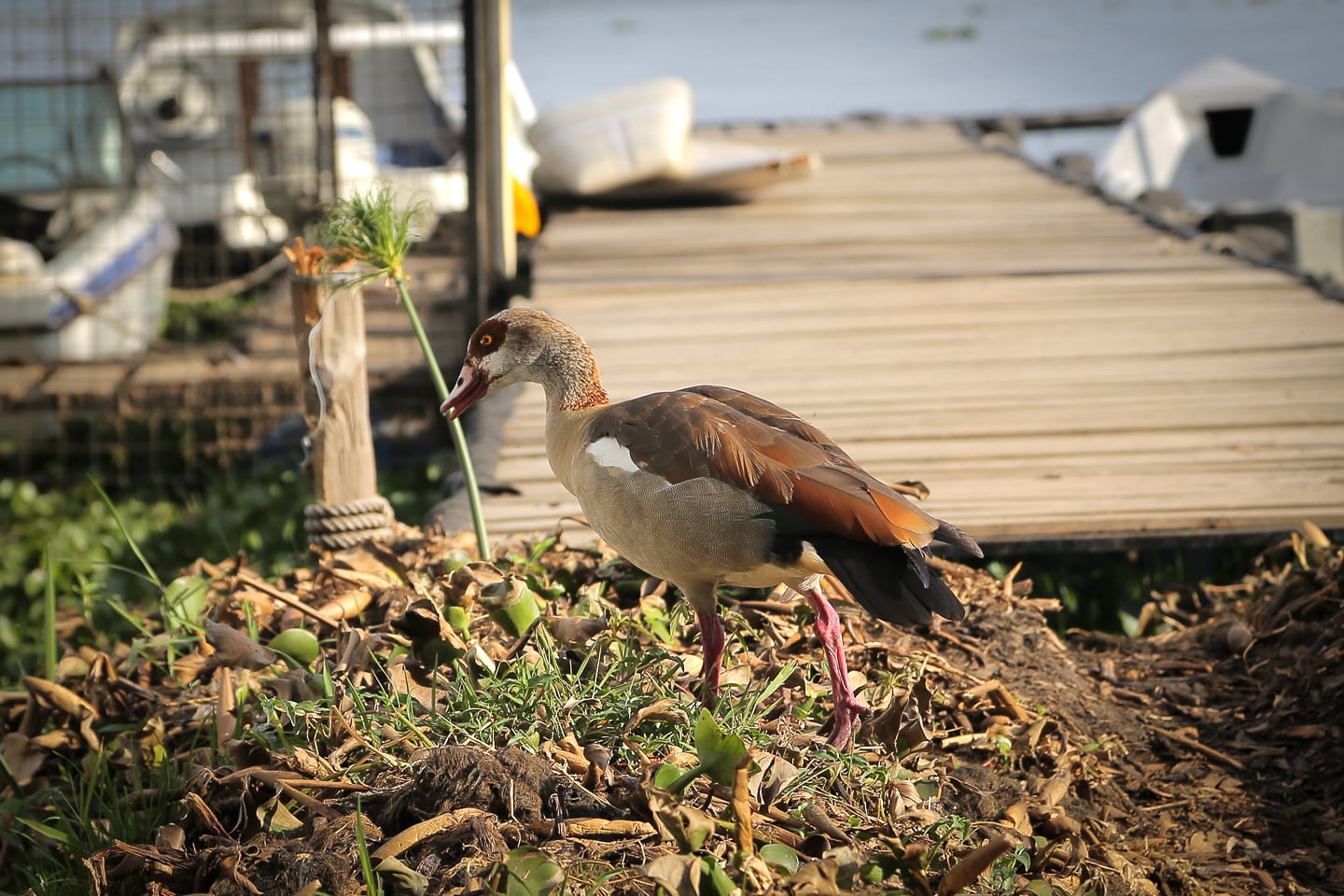 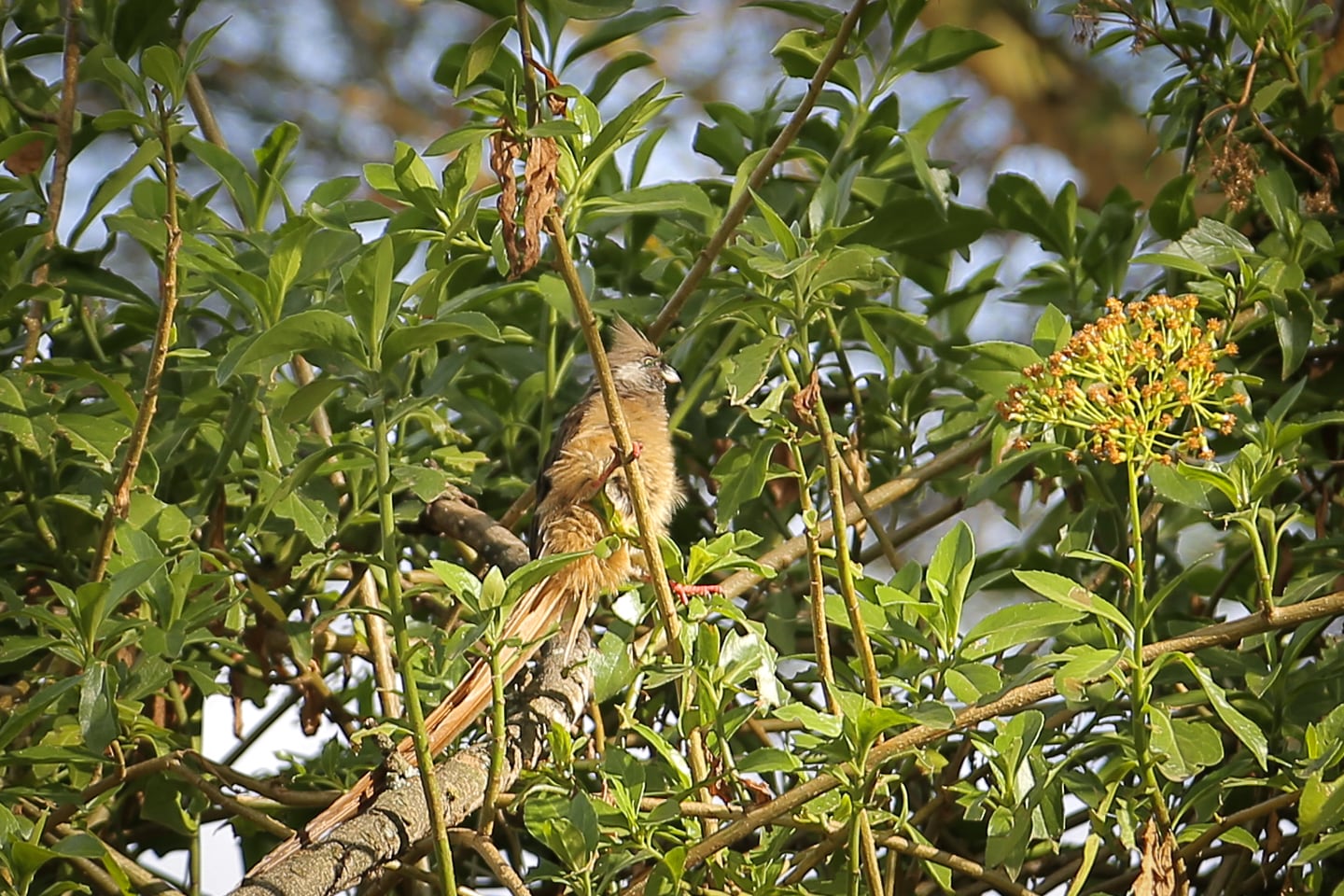 Is anyone out there able to identify this unusual guy? (UPDATE: Shirley & John M. (same as above) say Speckled Mousebird. After a quick DuckDuckGo! search (I generally avoid Google), I’d most certainly have to agree. Thanks S & J!) 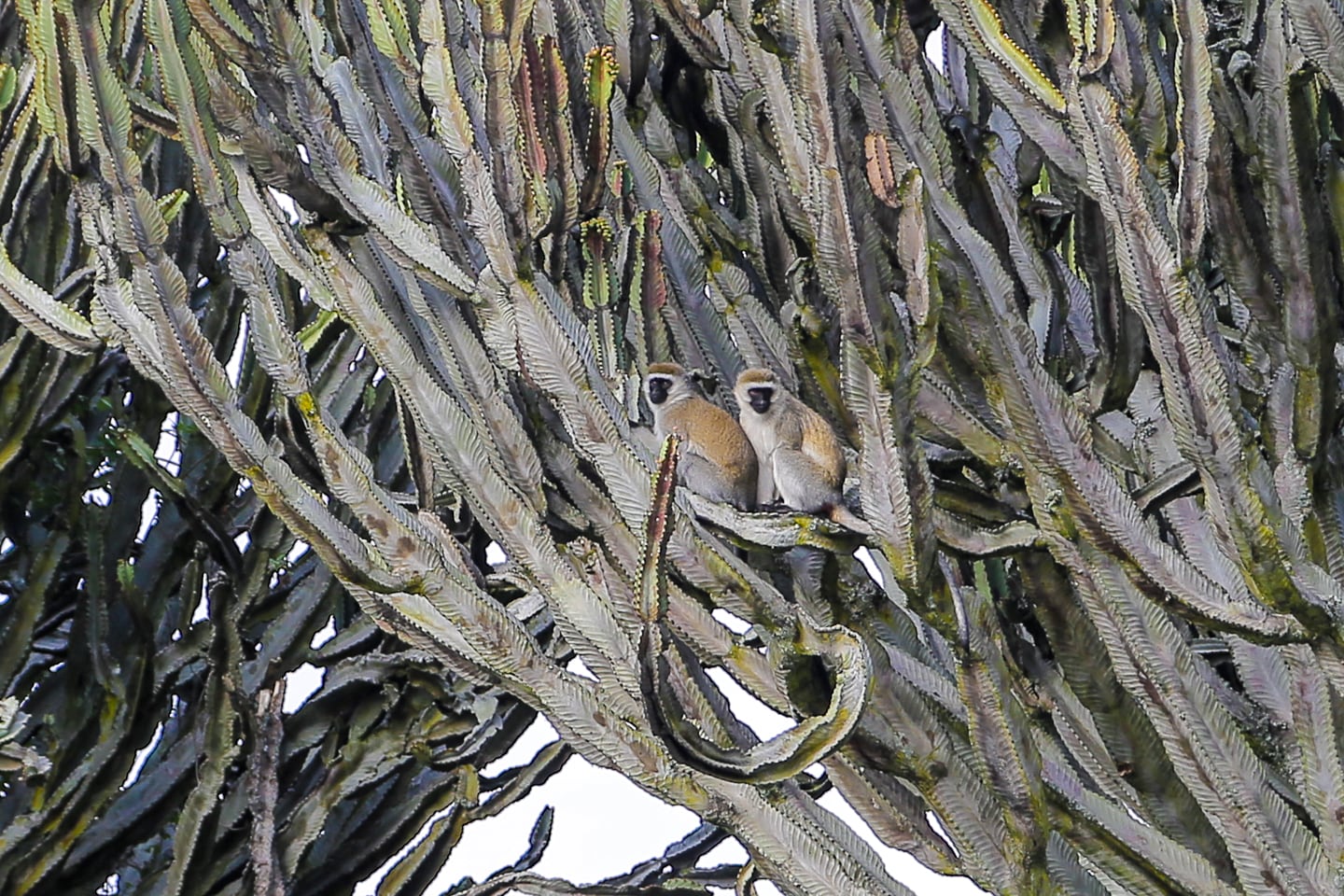 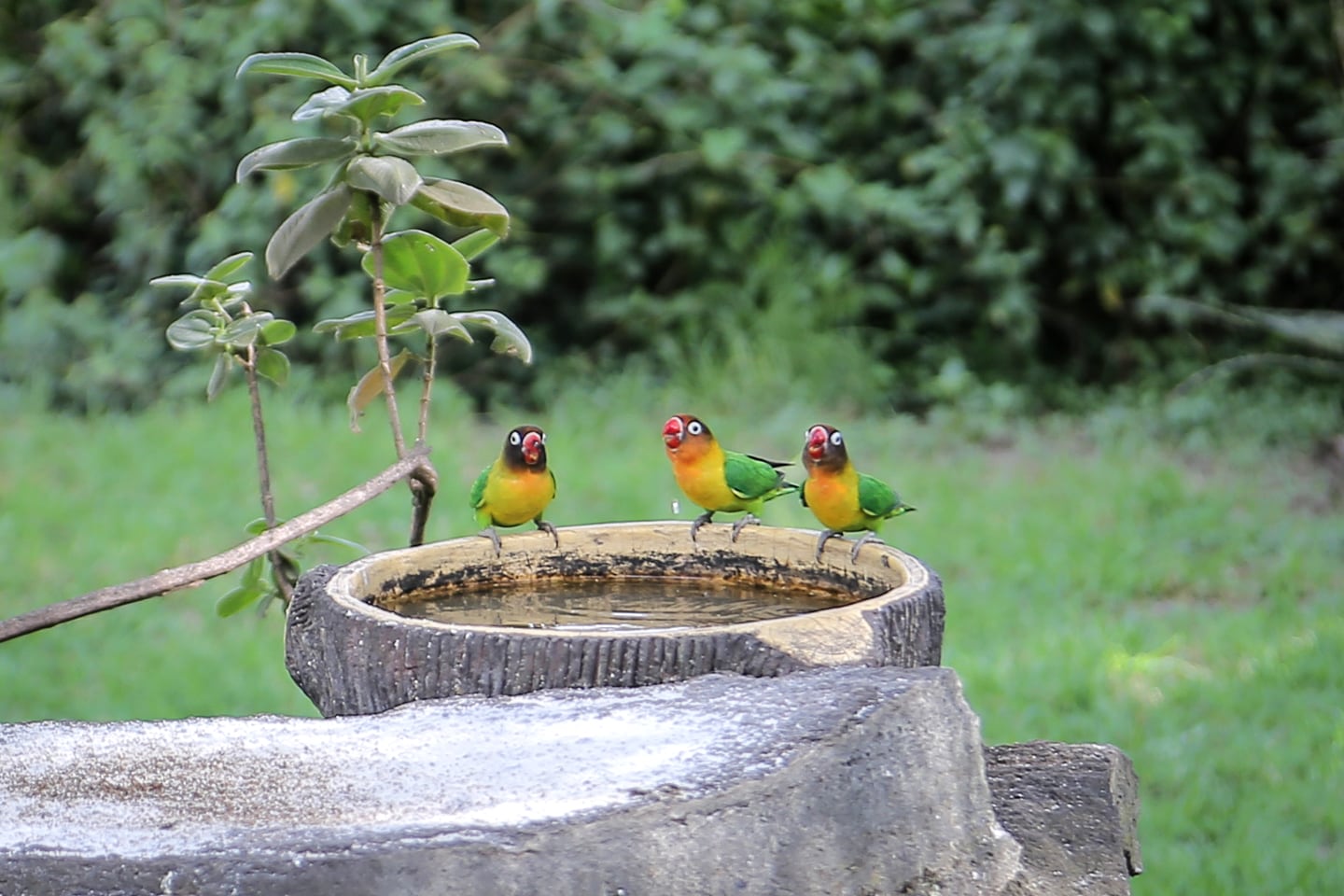 But our favorites to watch were these three Yellow-collared (masked) Lovebirds (Agapornis personatus) taking turns dunking their heads in the water feeder.