Into the Wild: Kampala to Gulu by Bus

After 10 days spent in Kampala, we were itching to finally set out into the field to begin our interviews in earnest. Our journey takes from the capital city over the Nile and on to Gulu.

After 10 days spent in the nation’s capital, Kampala, Alexandra and I were itching to finally set out into the field to begin our interviews in earnest. In that respect, on some level we felt we were very much headed into the “wild,” or at least the unknown for us and for the project.

However, there’s a degree of sarcasm implied in the title of this posting, as many Kampalans (like many residents of urban centers across the globe) felt venturing north, beyond the city limits, and indeed beyond the River Nile, was in fact headed into the wild. And even a matter of years before our arrival, the northern expanse beyond the Nile was the heart of intense fighting between government forces and Lord’s Resistance Army (LRA) rebel fighters — countless atrocities committed, hundreds of thousands of people forced from their homes, tens of thousands of children abducted and forced into combat or slavery or worse.

Northern Uganda in the 90s and 2000s was in many ways a wild place — but this was war, and in that respect, Northern Uganda was no wilder than the Mekong Delta of Vietnam in 1968 or Helmand Province of Afghanistan in 2011. Even in the absence of war, however, most Westerners (and even many African city dwellers) still tend to think of these places as wild, uncivilized no-man’s lands, where little ever changes and savage people live simple, backwards lives in ignorance and darkness — which couldn’t be further from reality.

This posting covers the six hour journey by bus from Kampala to Gulu — in many respects, a fairly mundane trip: father’s and mother’s headed to work, children going to school, aunt’s taking a trip to see their nieces and nephews; there’s traffic congestion heading out of the city and tranquility in the countryside, arguments and babies and dirty diapers, mansions and shacks, police and nuns and supermarkets. Yet, there are both overt and subtle contrasts, surprises and ironies that catch the American eye, that I thought worth sharing. Though the differences are often far more striking when visiting a new place, it’s important not to fixate on those elements alone. In many ways, it’s far more important and sometimes more interesting to recognize the similarities of lives lived anywhere and everywhere.

These photos are mostly Alexandra’s with a few of mine mixed in. They’re candid photos of everyday life along an expanse of open highway. I often find it a challenge to continue taking these kinds of photos once I’ve been in country for long enough as the exotic begins to mix with the mundane, but luckily Alexandra managed to pull double-duty for the two of us on this particular day — to be able to share with you unadulterated slices of life in a seemingly far off land is a powerfully humanizing tool.

So come along with us on a bus journey into the North.

Early Wednesday morning, Kenneth deposited the two of us in front of the main Post Office in Central Kampala to catch our Post Bus. World Bank staff and other practitioners had scoffed at the idea that we would take a public bus on a six hour journey (or really anywhere for that matter), and I suppose it may have seemed a bit weird from their standpoint, given that most World Bank consultants fly first class, stay at the high-rise Sheraton, and travel by private hire (or even in a UN convoy). I won’t lead you to believe that Alexandra and I chose to take the bus purely out of principal (the decision was mostly driven by the budgetary realities of our project and a sense of adventure), though we grew quite proud of our low-frills, low-cost, low-profile choices of transportation and in retrospect, found riding by public transport to be perfectly acceptable for our needs.

I suppose it’s worth noting that before you get on a post bus, all passengers are required to line their luggage up on the sidewalk in front of the post boxes (behind the woman above) so that a mammoth, ill-tempered German Shepard can sniff and growl at them (presumably looking for bomb materials or doggie treats). On the first occasion, the huge dog barks and growls and snaps at you and the whole thing is terrifying. The second time (like so many things in Africa), you’re just used to it — no big deal — kind of like eating room-temperature meat-filled pastries wrapped in used printer paper from a street kid.

The Post Buses have one of the best safety records of buses in Uganda (so we’re told). Some attribute this to their government affiliation, while others attribute it to the buses’ lumbering speeds and frequent stops to drop off/ pick up mail. I like think that asking for assistance from the Big Bus Driver in the Sky usually doesn’t hurt either [above].

Based on our research, chances are fair that this individual above may have been a rebel combatant in the not-to-distant past — now on his way to his job to make a living for himself and his family like anyone in any other city across the globe. It’s important to keep in mind that the vast majority of people living on this planet simply want to have the opportunity to provide for themselves and their families.

Roadside vendors such as this individual are common fixtures across the continent. I lived for two years never having to bring snacks along for a long journey knowing that there would always be someone selling something delicious outside my bus window. My heart (and stomach) aches a bit now whenever I board a climate controlled “luxury” bus in more “developed” countries. I miss my roadside assistance. As with automobiles and the internet, the true price of technology has always been loss of real human interaction on a daily basis; another reason why Africa’s such a special place — for better or worse, humanity is unavoidable.

These guys and gals are selling bananas and pineapple. It’s often customary in many places for bus passengers to grab a pineapple in the course of their travels to share with family at their destination.

Not only do you get the BEST chapati at Musilaamu’s, you get a side of enthusiasm served fresh daily! 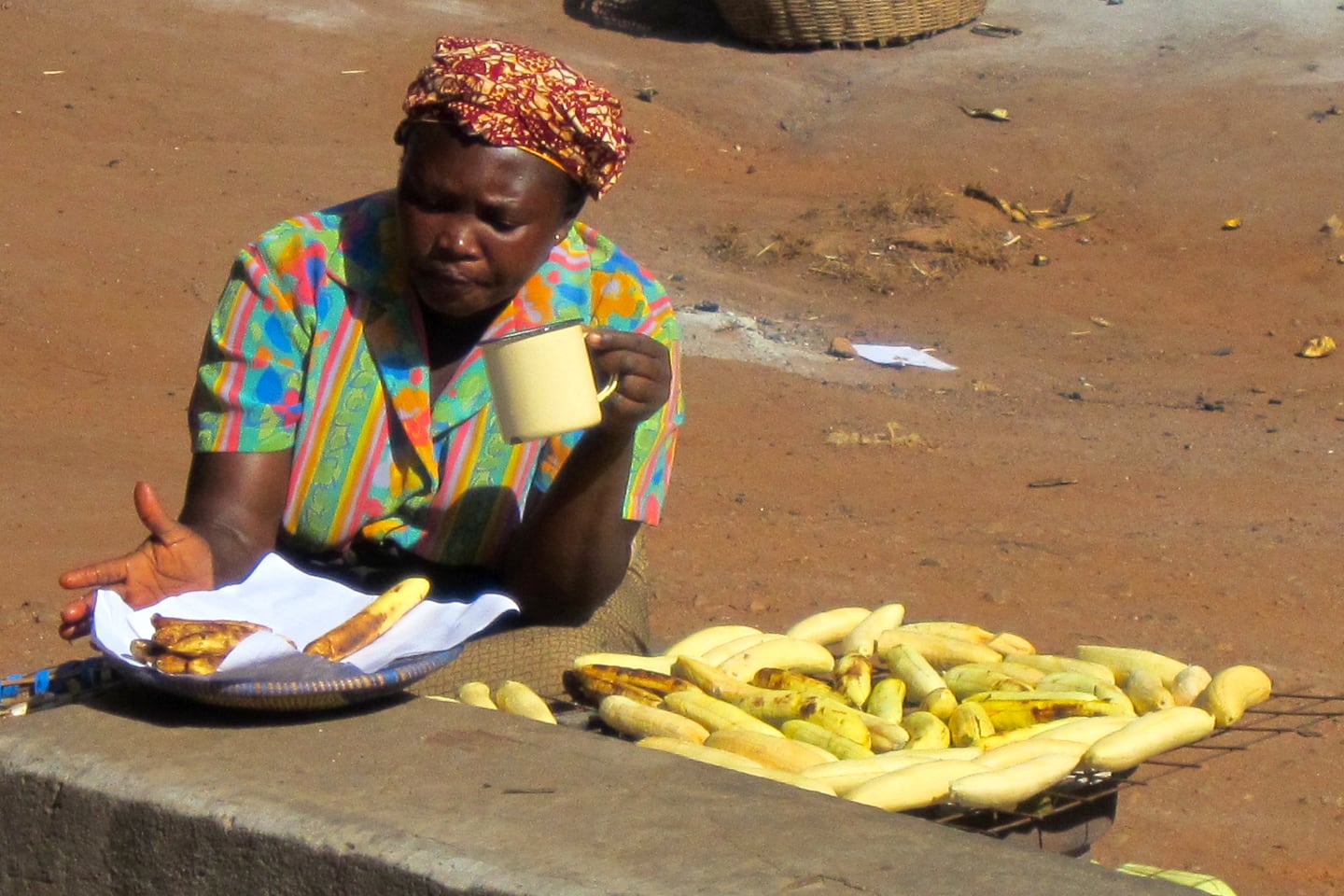 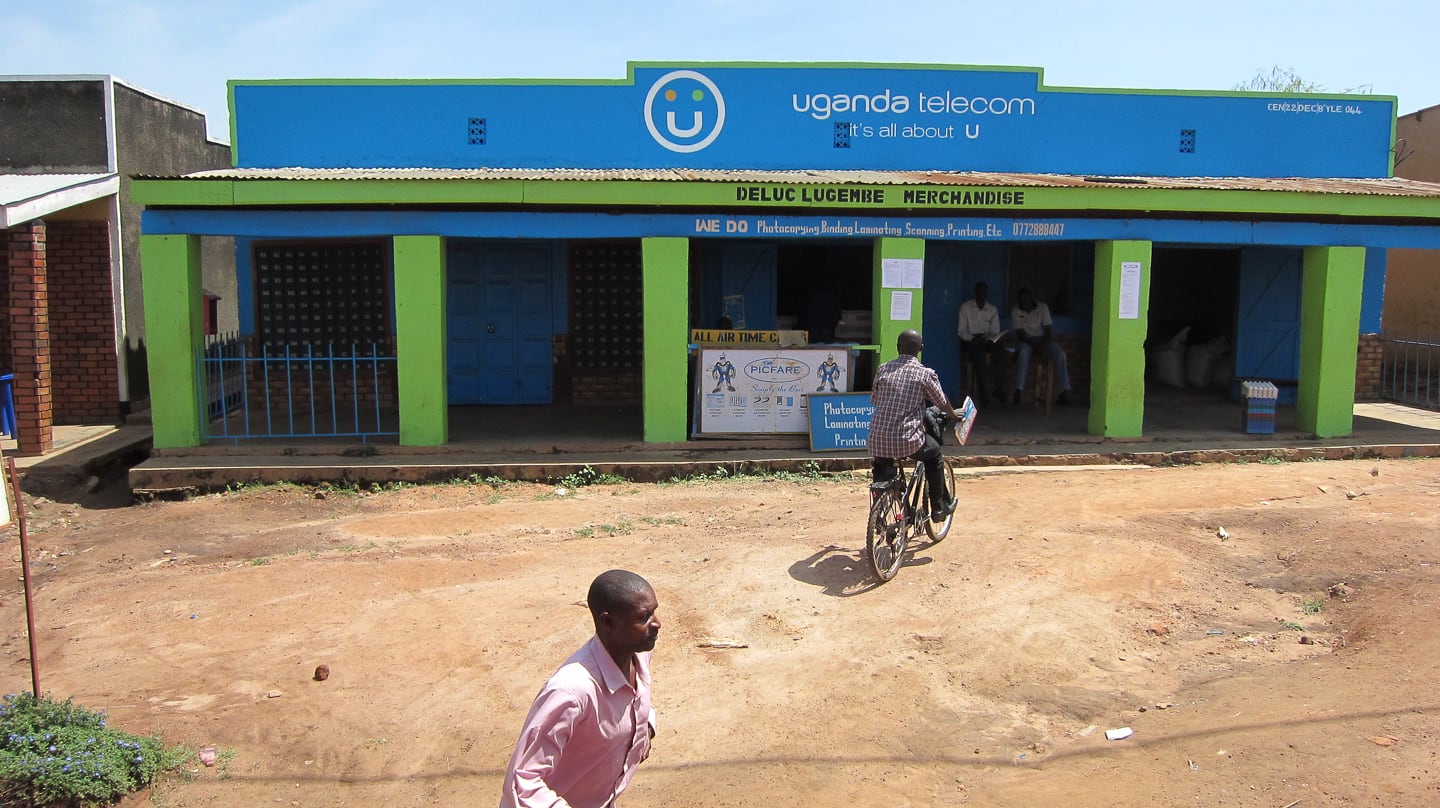 Movin’ to the Country…

…Gonna Eat Me a Lotta Mangos.

Finally, out of the city and into the countryside! Our first stop, the small rural post-office and mercantile store above (cleverly disguised as a Uganda Telecom shop). In Uganda, and many other countries throughout the world, it is common for mobile phone carriers to offer to paint small shops in the livery of the telecom company; the telecom companies get free advertising and the shops get an extreme makeover!

NOT THE RIVER NILE 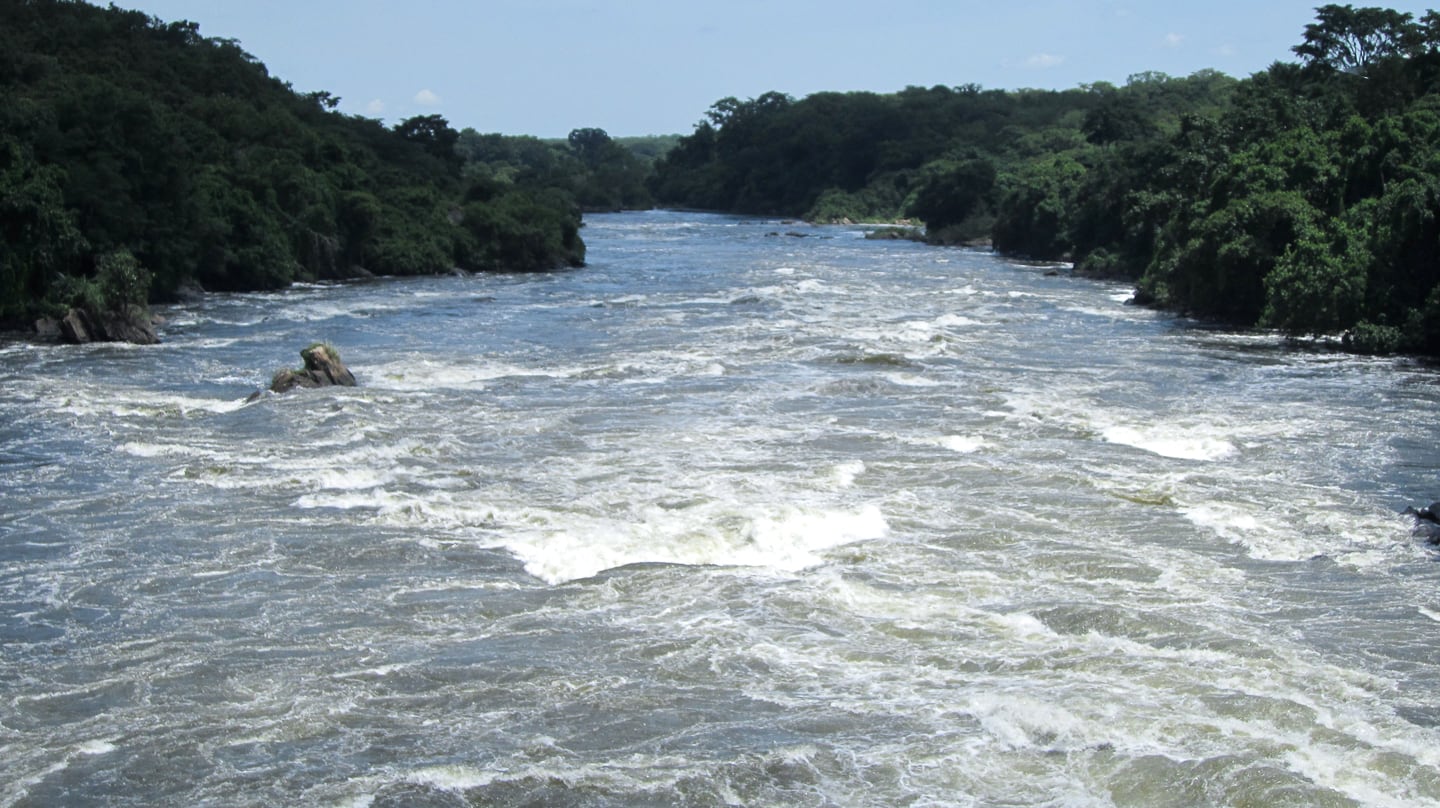 NOT THE RIVER NILE

The photo above is not the River Nile crossing into Northern Uganda, as such photos of the storied waterway taken from this particular bridge crossing would not be permitted by Ugandan authorities (of course!). Alexandra and I had heard stories regarding this and the routine confiscation (these days, deletion) of photos taken in proximity of any crossing over the River Nile. And in fact Alexandra did take some photos of the Nile while crossing over a bridge on our way to Arua (naughty, naughty, Alexandra!), for which our landcruiser was promptly pulled over by Ugandan authorities, camera seized and photos subsequently deleted by highly trained professionals who seem to know exactly where the delete function is on a number of major brands and models.

So what is it about the Nile that gets the authorities so hot and bothered? Well, they don’t really say, but we’ve heard it likely has more to do with the bridge crossing than the notoriety of the waterway. Basically, the Nile is a raging and formidable crossing (like in the photo above…if it were the Nile, but it is not…of course…because that would be impermissible) which completely dissects the north of the country from the south. Therefore, the few bridges over the river are vital lifelines, which, in times of war, would make them important targets for the enemy. Thus, photos of the bridge structure and areas adjacent could be used in the planning of destructive activities. The fact that authorities continue to keep an eye out for such activity is a window into the psyche of present day Uganda; the fighting may be in the past, but Uganda has a long way to “normal.”

If I had been stealthier than Alexandra, say with ninja-like reflexes, I may have taken home a photo of the Nile at that particular point, perhaps even posted it to my own blog for others to enjoy, and written approximately 3 paragraphs directly following it; but of course I’m not a ninja, so all I have is the photo above to offer, which was not taken from a bridge crossing the Nile into Northern Uganda (of course)… 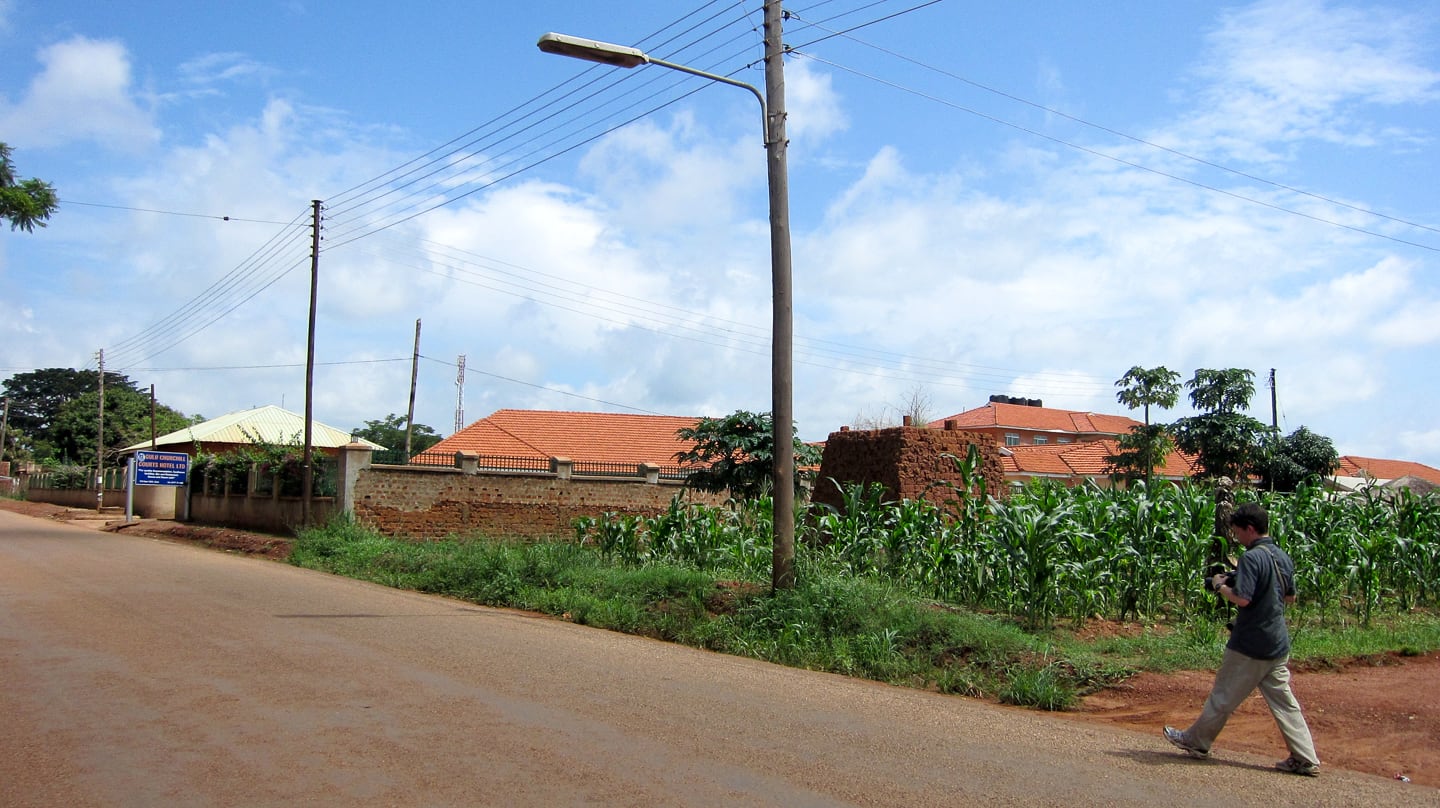 Churchill Courts, our home for the next four nights, and another, and another three much later. It was a fabulous place to relax and get work done in, which is why we decided to return during our subsequent trips back through Gulu. As I seriously question whether many readers actually make it this far I’ll save my full review of Churchill Courts for the next posting (if you did actually make it this far, please post the words: “Uganda rocks” to the comment section as a way of communicating your blog reading endurance levels to me.

After a long day of travel, we made it safe and sound to Gulu, home of the Acholi people; and just in time too! Later that night the hot northerly dessert winds of the Sahara would collide head on with the cool, humid southerly air of Lake Victoria — as it often does in Gulu — spawning a most fearsome thunder storm of Biblical proportions. Yet at 7:15pm, all is tranquil and clear; the calm before the storm.

6 thoughts on “Into the Wild: Kampala to Gulu by Bus”