We arrived in Kolkata, our first stop in India, under the cloak of darkness in the wee hours. Two days later we found ourselves bed-ridden and 10 lbs. lighter with six weeks left in India! 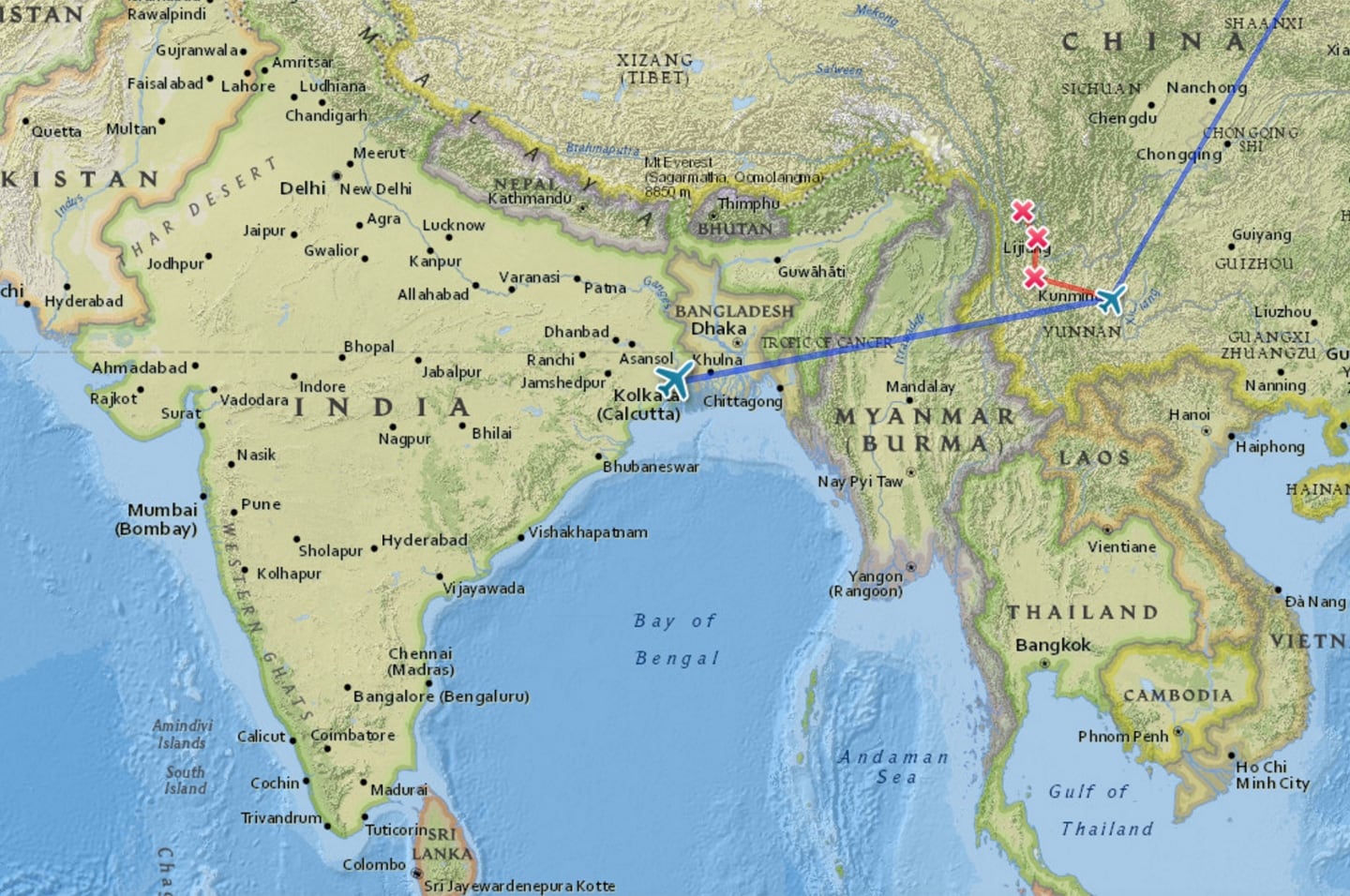 The city formerly known as Calcutta

We arrived at the Kolkata airport very early in the morning (1 am) and had made reservations at a place near the airport in the suburb of Dum Dum. We had always had good luck in China with hotels, guesthouses and hostels honoring our online reservations, but had read and heard horror stories of accommodation in India frequently dropping the ball and not making good on their error. The last thing we wanted was to be arriving in the middle of the night in a strange country with questionable reservations, but as we hadn’t had internet in a few days and no phone to confirm, we had no other choice but to cross our fingers and hope for the best.

Luckily, everything went as smoothly as one could hope for in India. Our luggage wasn’t lost en route, we found the pre-paid taxi stand at the airport easily, and the taxi driver was knowledgable, friendly, and not pushy in the least. The whole pre-paid system is very nice. You pay the amount at a booth at the airport or train station based on an official posted fee chart and are issued a ticket with the taxi’s license plate number. You find your taxi, give the paper to the driver and you’re off! If the driver is particularly good, you can give a baksheesh (tip) at the end, but it should not be expected.

When we arrived at our hotel, a few kilometers down the road from the surprisingly small international airport, we had to pound on the door for a few moments and wake up the security guard sleeping in the lobby who in turn woke up the manager who indeed found our reservation. He checked us in, gave us towels, toilet paper and room key and showed us to our room.

In India, hotel and guest house check-in typically involves completing a pink sheet requesting various personal info (passport number, visa number, arrival date in India, previous stop, next stop, number of days you expect to stay, nationality, home address, and telephone number (if applicable)). Afterwards, they’ll bring out a large ledger on which you’ll be asked to enter the same information again. Copies of passports are made (some times they ask you to come back in 20 minutes because the power is currently out, etc.) Unlike China, you typically pay for everything at the end of your stay at checkout rather than upfront.

Kolkata, itself, isn’t a terribly attractive city with few historical sights (compared with other major cities in India). It’s also got a bit of a reputation for being filthy and stuck in the “stone age.” For these reasons, Kolkata is not generally a terribly attractive destination to tourists. The allure and intrigue of Kolkata lies in the mingling of cows, hand-rickshaw drivers, yellow Ambassador cabs, gurus, fruits and vegetable stands, the ringing of bells from small Hindu temples — all against a decaying urban backdrop which once was home to the British East India Company, the center of British power in central Asia for centuries.

But there are some sights to see if you’re looking to sight-see. One such place is the magnificent Victoria Memorial. The Queen Victoria Memorial is certainly out of place in the crazy city of Kolkata in more ways than one. It looms above the central park-like Maidan (a swampy landfill where goats leisurely graze alongside picnickers) like an enormous marble ghost that has no business being there, yet missed the last train out of British-ruled India. Despite all of that, it is quite breathtaking (especially from afar) and includes an interesting museum on Kolkata history, which are all worth a visit.

The grounds of the giant memorial are beautiful in their own right, affording excellent views of the huge memorial. Despite India’s conservative views regarding public displays of affection, we found that the gardens surrounding the memorial seem to attract many young couples holding hands, having picnics and making out on park benches — typical perhaps for a park in the West on a nice day, but pretty taboo by Indian standards. 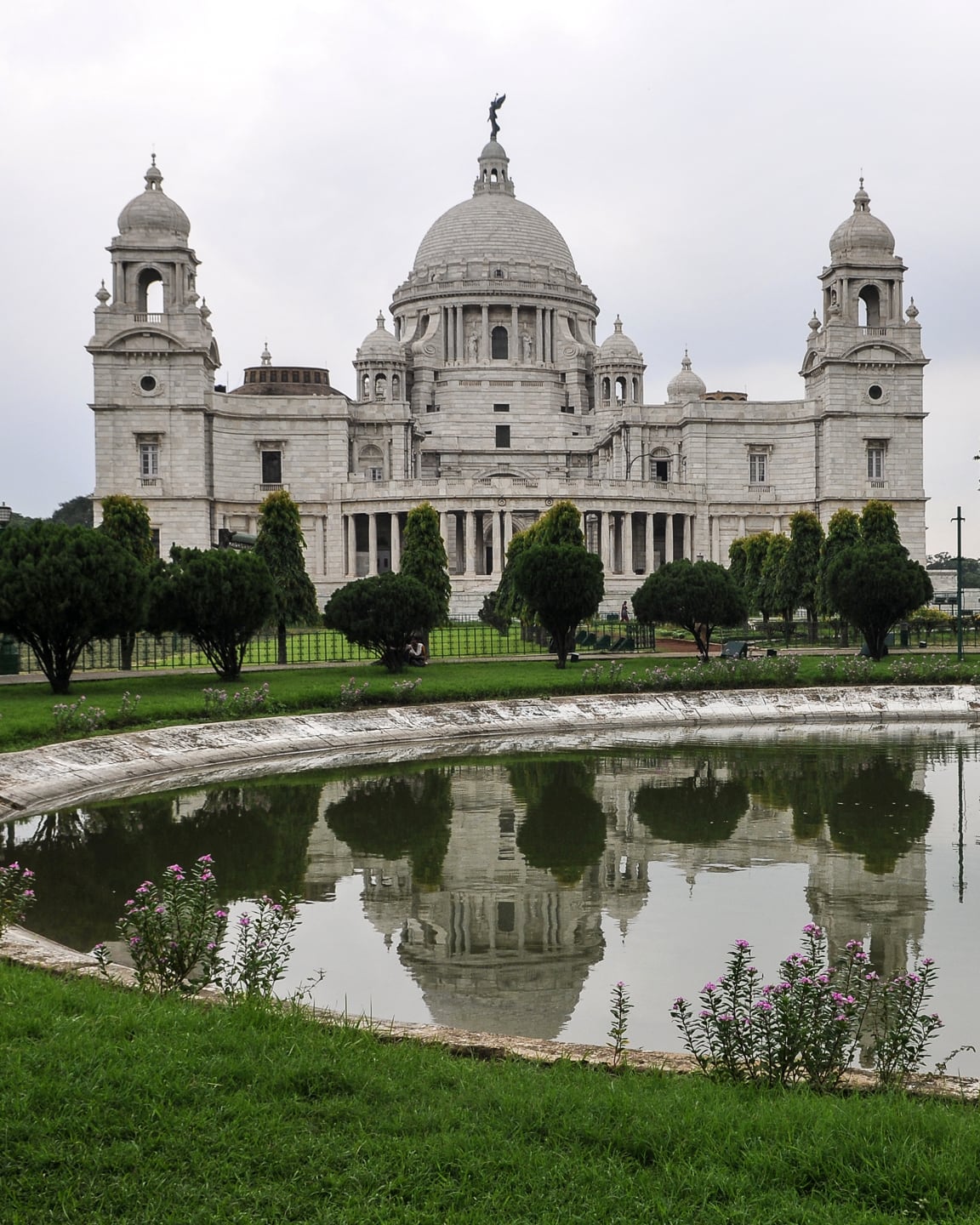 One thing in particular that surprised me, especially along Sudder street (the main backpacker drag which we stayed off of), was the number of tourists walking around with large, expensive cameras hanging from their hips — and in fact, this has been the case all over India. After China, I assumed that I would be concealing my DSLR most of the time, stealing shots in the rare instances I felt it was safe to do so — lest I become a target and fall prey to thieves or worse. Yet, India has really been no different from China in that respect. Sure, we guard our things a bit more closely on trains and in buses, but I’ve never felt any apprehension regarding walking around with my camera hanging off my hip. After a few days in Kolkata, the camera was out whenever I was.

Also unique to Kolkata are the high number of hand rickshaw cart drivers which still ply the streets daily. Apparently, you won’t find this anywhere else in India but Kolkata (see the first photo of this post). You will find cycle rickshaws in other parts of India, but not handcarts. In Kolkata, however, they are everywhere.

Kolkata is an amazing place to take photos, given the colors, mix of people and animals, colorful spices, decrepit colonial structures, dramatic lighting, and general insanity. I had dreams of taking my camera around in the evening, up and down Sudder street and into other neighborhoods, but one particular Ashram shattered those dreams.

It was Lonely Planet’s “Top Pick” for places to eat. The book said it was a very busy place for lunch, so best come early. What we didn’t know was that they served unrefrigerated leftovers from lunch for dinner…

The coconut prawn curry sounded too good to pass up, and when it came out, it looked delicious, no foul smell and mighty tasty looking. But it was room temperature. I usually have pretty strict rules about eating meat and shellfish overseas, but we were incredibly hungry. And it was an LP Top Pick. LP wouldn’t fail us, right?

Fast-forward a day later and I’m holding Lori’s hair back as she violently expels the demons in her stomach. Hours later, I’d suffer the same fate but worse — over and over again. Very rarely have I had to actually take the Cipro I carry around with me in developing countries. I’m usually able to let it run its course, sometimes with the help of the occasional Pepto. But this time was different. Oh the violence. Oh the horror. As soon as I determined I could keep something down for a few hours, I jumped on the Cipro and never looked back. Because Lori’s symptoms were less severe, she opted for not taking the pills, for which she paid mildly, yet consistently for another week, though eventually her condition did improve.

That illness knocked us out for the last couple of days of our Kolkata stay, so I never did get those photos. Oh well, I still had over six weeks in India with no shortage of opportunities.

Our time out of commission wasn’t without some excitement, however. Hotel maintenance was painting the room next to ours, which was nauseating in itself (I don’t know what type of paint they use in India, but it sure ain’t good ol’ fashion water-based latex), which forced us to move rooms minutes before passing out or vomiting. Our shower knob broke into the free-flow position, and when we called the staff to come fix it, they sent an attendant who peeked into the bathroom, tried to turn it off (as we had been doing for the past five minutes) as the bathroom filled with water, before giving the infamous indecipherable Indian head wobble, turning around and leaving the room, never to return. Luckily, we were able to jimmy-rig the knob ourselves to get the flow down to a drip, but were astounded at the level of complacency displayed in a crisis moment.

We most certainly could have been out of commission for a day during far worse parts of the year, given that the Olympics were in full swing and three channels on our TV were actually broadcasting it. This was fantastically relaxing, given that neither Lori nor I had really had any time in the past two years to vegge in front of a television for hours on end.

Also, particularly of note, we were in Kolkata during India’s massive blackout, when a huge chunk of the energy grid collapsed suddenly leaving 1/6th of the world’s population without power. Kolkata was relatively unaffected given that the government there had recently installed a mighty switch that isolated the region from the rest of India. Apparently, last year West Bengal had grown tired of Delhi constantly dragging everyone else into a power meltdown and decided they needed a back-up plan. As a result, we were fortunate enough to be able to watch the mayhem that ensued on TV from the comfort of our hotel room. Hundreds of millions without power, hundreds of thousands stranded at airports and train stations, while life in Kolkata, for the most part, continued. Yes, a lot of people were affected, yes, it was a big deal, but it mustn’t go without mention that nearly 600 million people in India live without electricity on a daily basis in India. So apart from those traveling, it was a problem for the privileged, which is most certainly why it received so much media attention.

Our first journey via Indian rail was from Kolkata to New Jalpaiguri on our way to Darjeeling. It was a most comfortable ride, lasting about 8 hours in comfy seats. Most subsequent train rides would be in bunk cars where you have to fight for a good spot to sit or to see out the window. But on CC cars, you can lay back, relax and enjoy the ride.

Another wonderful update!
So glad you both are doing better, yes, getting sick in these travels is almost just
just part of the trip.
What experiences you have, wow!
Stay well, love to you both, Grandma T.&Cyrus