A traveler’s nightmare — racing to catch the last train out of town with only minutes to spare, only to discover you’ve made a horrifying error.

Suzhou, China is probably bigger than you think (4 million people with an administrative/ metro area encompassing a population of over 10 million!). In China, it is customary for a city of this size to have a couple of major train terminals — Suzhou’s got FOUR (three of which were only completed in 2011), which can make getting in and out both very interesting and very confusing. 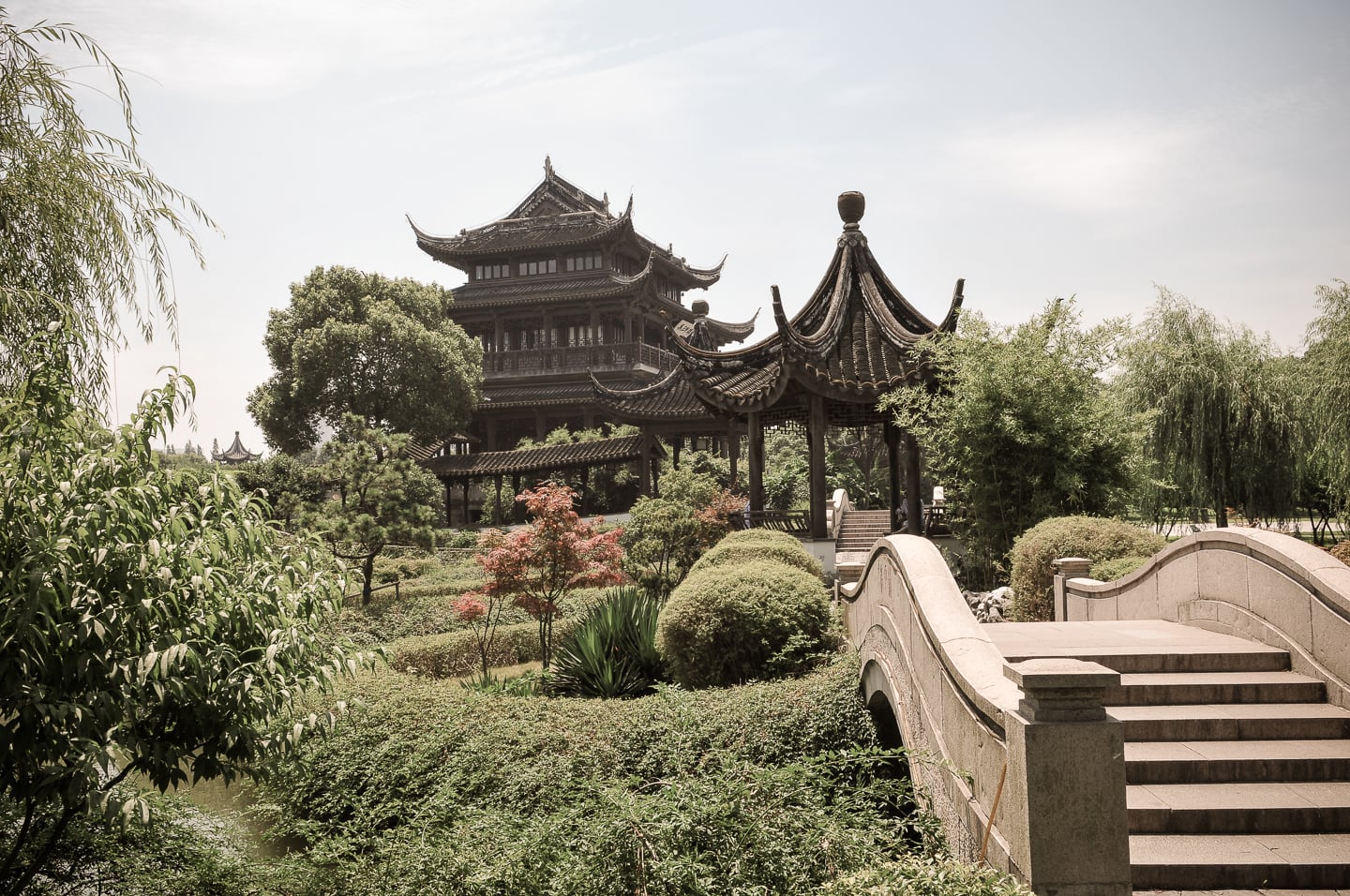 Our final day in Suzhou was perhaps the most stressful in our entire six-week backpacking trek through mainland China. Train tickets can be extremely difficult to come by for foreigners in China, so we’ve had to book early (a week or two in advance, and rarely getting our first choice train). We’re also not really sure what sort of refund, rescheduling, or other accommodation is extended (if any) to those who happen to miss their train. So…missing one can spell disaster.

The day started pleasant enough, squeezing a couple more classical gardens in before making our way back to the hostel for check-out. In China, hotels/guesthouses can charge you 50% of a night’s stay for not checking out on time, so it was sort of important that we not be late.

We had planned on getting a taxi back from Pan Gate, which is located across town from where we were staying. When the 11am rolled around, however, getting a taxi proved impossible — not for lack of taxis (the streets were packed with them!), but for lack of available ones.

Racing halfway across town in the brutally muggy Suzhou summer heat, we ultimately snagged a pedicab who charged us an exorbitant fee (which is a common practice in China and difficult for foreigners to avoid). In our desperation, we had somehow found ourselves a clairvoyant driver who sensed the urgency of the situation, nearly destroying a number of other cyclists and pedicabbers in his path as he hightailed it to our hostel. Money well spent. 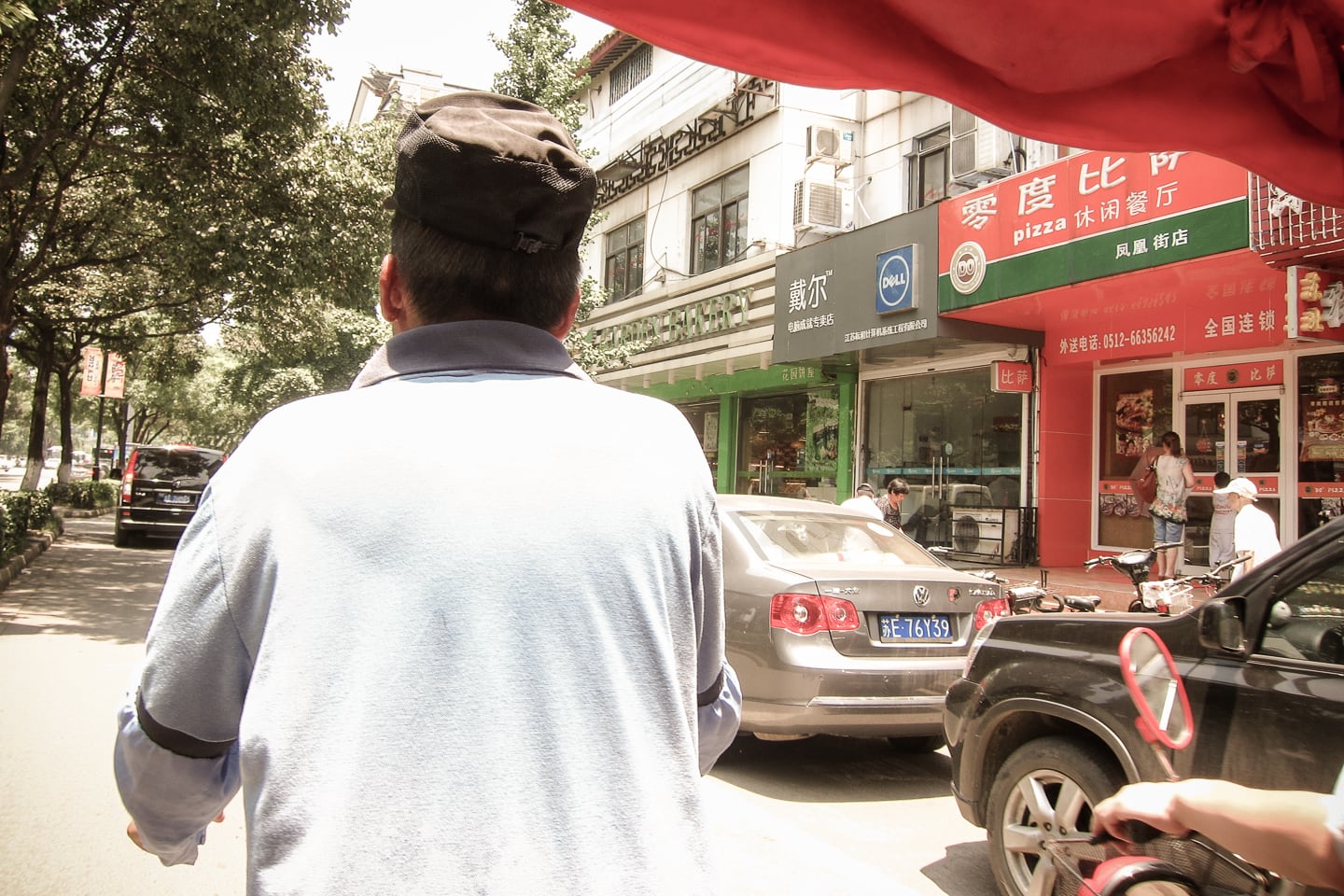 To our relief (and utter amazement), we made it back to the hostel with a couple of minutes to spare. Collecting our luggage, we hoped the day’s insanity was behind us, but it was not to be — not by a long shot.

I asked the guy working the front desk if they could call a cab for us as to avoid the morning’s frustation. Given the restrictions of the UNESCO quarter, however, that was not possible, he told us. So we headed out to the main street to do the only thing we could do — try desperately to get a taxi ourselves in the midday rush.

We stood along the busy road skirting Pingjiang waving frantically to anything and everything that looked remote promising — we did this for what felt like hours int he midday heat.
Finally, after waving unproductively at everything in sight for about thirty minutes, we managed to catch the attention of a taxi dropping off passengers on the other side of the avenue.
“Success!” we thought.

The driver made eye contact with us and began to turn around to collect us with the unthinkable happened — a middle-aged Chinese couple bolted out of a nearby hotel and straight for the cab in an obvious attempt to steal our hard-earned ride.

In our frenzied (and partially heat-stroked) daze, I stormed across the four lanes of unrelenting traffic shouting at them in English sprinkled with the little Chinese I knew, before my wife — much more productively — took matters into her own hands, darting past me and plowing the couple out of the way with her pack, straight into the front seat of the cab. Not our finest moment in terms of cross-cultural relations, but we were left with few other options — and for what it’s worth (not much in China, it seems), we had flagged the cab first.

So, here’s where we made the near-fatal mistake. We tried to tell the cabbie (who did not speak English, because, after all, we’re in China) to take us to the Suzhou Railway Station. We did so through a combination of utilizing the dictionary in the back of our guidebook and flashing our tickets. After about 30 seconds of this charade (and glancing at our tickets) he appeared confident he understood and raced off to the train station.

Luck finally seemed to be in our favor given that our cabbie could have easily qualified as a Formula One driver, getting us to the train station in record time. Upon arrival, we were very pleased that we [thought] we recognized many of the sights along the way from our inbound train trip, especially the concourse where he dropped us off. With less than 20 minutes to spare, we proceeded through security and peered up to the main board to match our train number with the gate number.

Just one problem: Our train number wasn’t up on the board. What gives?

Lori found a woman who worked at the station and handed her the ticket. She motioned a resounding “NO” pointing to the train station name on the ticket. In all our hurrying, it hadn’t occurred to us that the station we needed was brand new, most certainly not in any current guidebook, and many people didn’t even know it existed. The station we needed was much FARTHER north than Suzhou Railway Station, appropriately named SUZHOU NORTH STATION.

We hightailed it out of that station in near-panic, to the departures area trying to get the attention of another taxi driver, but to our utter frustration everyone was waving us off. We realized that when we had arrived three days prior, we had followed signs down to a labyrinth below the station where passengers were matched up with cabs. If we were forced to go through that process again, we’d surely miss our train.

At last, when all seemed lost, we caught a break. 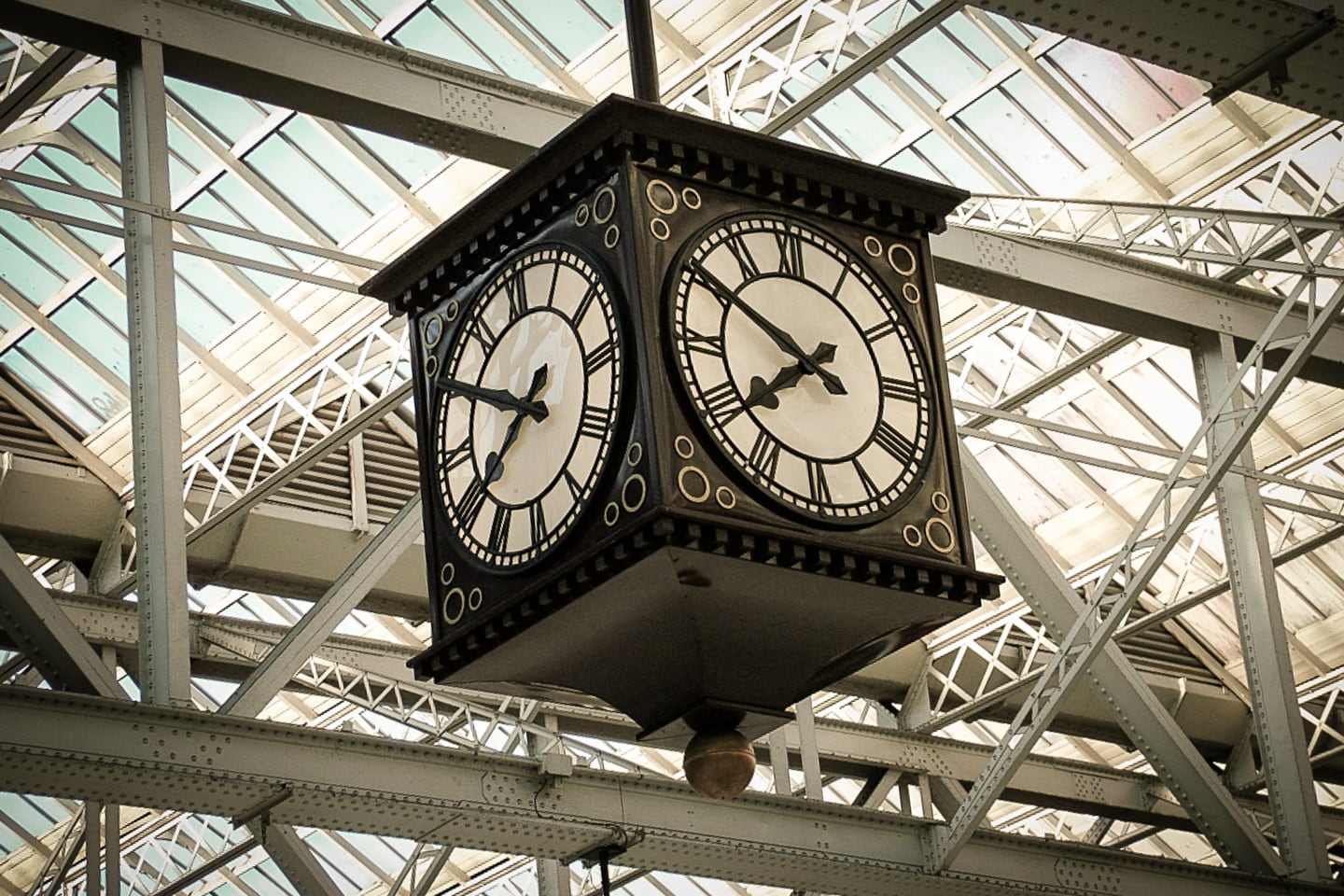 Help from a Mildly Unscrupulous Cabbie

I caught the eye of one particular taxi driver who struck the magic balance of sensing our intense desperation and having just few enough scruples to help us out (but amazingly not so few that he tried to rip us off). He waved us over, looked around and motioned for us to get in.

We had learned our lesson, and this time simply gave him the ticket FIRST THING so that he could read the Chinese script. He nodded his head, looked at his watch and back at us, let out a big sigh, looked at his watch again with a big chuckle and then back at us — communicating in a universal language that we most certainly understood — his eyes said it all: You guys are TOTALLY AND UNDOUBTEDLY SCREWED…but…let’s see if we can’t get you there anyways.

We raced out of the station, dodging traffic and running all sorts of red lights. The dude was an amazing driver. He was fast, but unlike some other cab experiences in China, we never felt for a moment that he wasn’t in total and complete control of his automobile. We had Master Kong in our midst, and the aging VW he drove was like an extension of his body. I can’t even begin to explain the feeling of coming onto the mega-superhighway with 10 minutes to spare, seeing the unmistakable elevated ultra-high-speed rail lines beside us stretching into the hazy distance to what was most certainly the brand new railway station in the middle of a farm field and reading 7km (roughly 4 miles) on the highway sign above. It looked like we might actually make it.

To put all this in perspective, it was a trip that should typically take 20 minutes from station to station (on a good day) and we made it in the requisite 10. Luckily, the brand new station was efficient and well-planned, security was quick, and our platform was nearest the front door.

We made it just as our beautiful bullet train was coming into the station (with 2.5 minutes to spare until departure). We nearly cried tears of joy knowing full well that missing that train could very well have set us back DAYS.

In 2.5 minutes, we were sitting in luxurious comfort, airing sweat-soaked shirts beneath blaring A/C vents, and, most importantly, headed north in the direction of Tai’an at a mind-numbing 200mph. 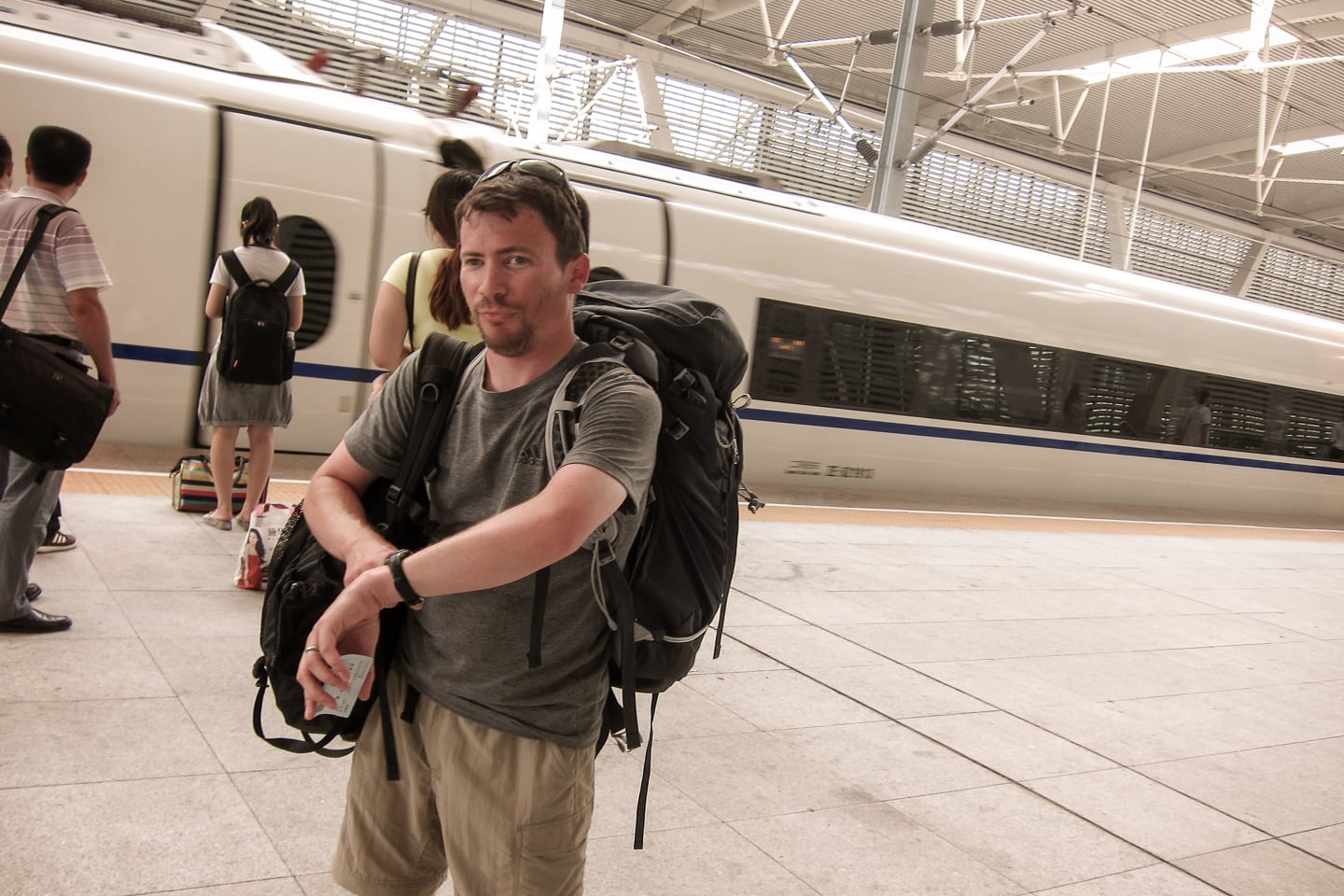