Riobamba and the Search for the Devil’s Nose

Stopping over in a surprisingly impressive city with the hope of unlocking the secret to one of the world’s most infamous railways, La Nariz Del Diablo (The Devil’s Nose).

A short distance out of Cuenca, we found ourselves in the surprisingly impressive little city of Azogues.

I frequently find that some towns we pass through (like Azogues, above) make me want to jump off the bus and have a look around, particularly the ones that don’t appear in guidebooks but are brimming with character and opportunities for exploration.

But alas, we were Riobamba-bound this day, because we were ultimately Baños-, Quilotoa-, Otavalo- and Quito-bound, with a flight waiting for us in a couple of weeks.

Backpacking is full of tough decisions like this. We can’t see it all, nor would we want to cram it all in. So, on we go. You have to save something for next time, I suppose.

Actually, we did end up getting off the bus in Azogues, but for an entirely different reason.

Forty minutes into a five hour bus ride from Cuenca to Riobamba we decided we’d had enough. Our driver was nuts-o, and becoming more so as we approached the downtown Azogues, playing chicken with freight trucks, running traffic lights and coming within inches of plowing over groups of pedestrians multiple times. Ecuadorians on the bus were even telling him to be careful and slow down — when the locals start getting worried, it’s definitely not a good sign.

After a particularly harrowing near miss, we made our move to the front door. The money collector hadn’t come around yet, so at the next traffic light (that the driver actually stopped at) we said adios and jumped off. The driver was none to pleased with this, but neither were we. A brief exchange of niceties and universal terms of endearment ensued before the bus disappeared down the road.

Lori had been reluctant to jump ship because of the possibility that we might be waiting for a very long time on the side of the highway for another bus. But this being the Pan-American Highway and a sizable town, I hoped she was wrong about that. All I knew was that I wasn’t going to continue on that bus for another mile.

Sure enough, almost immediately after we got to settling in for the long haul, another express bus rolls up shouting “Riobamba! Riobamba!” Got to love “third world” travel. Certainly one of the things I always miss about Mozambique is being able to stand anywhere on a highway and know I’ll get a ride to where I’m going. Ain’t gonna happen in the States. In seconds we were back on the road. 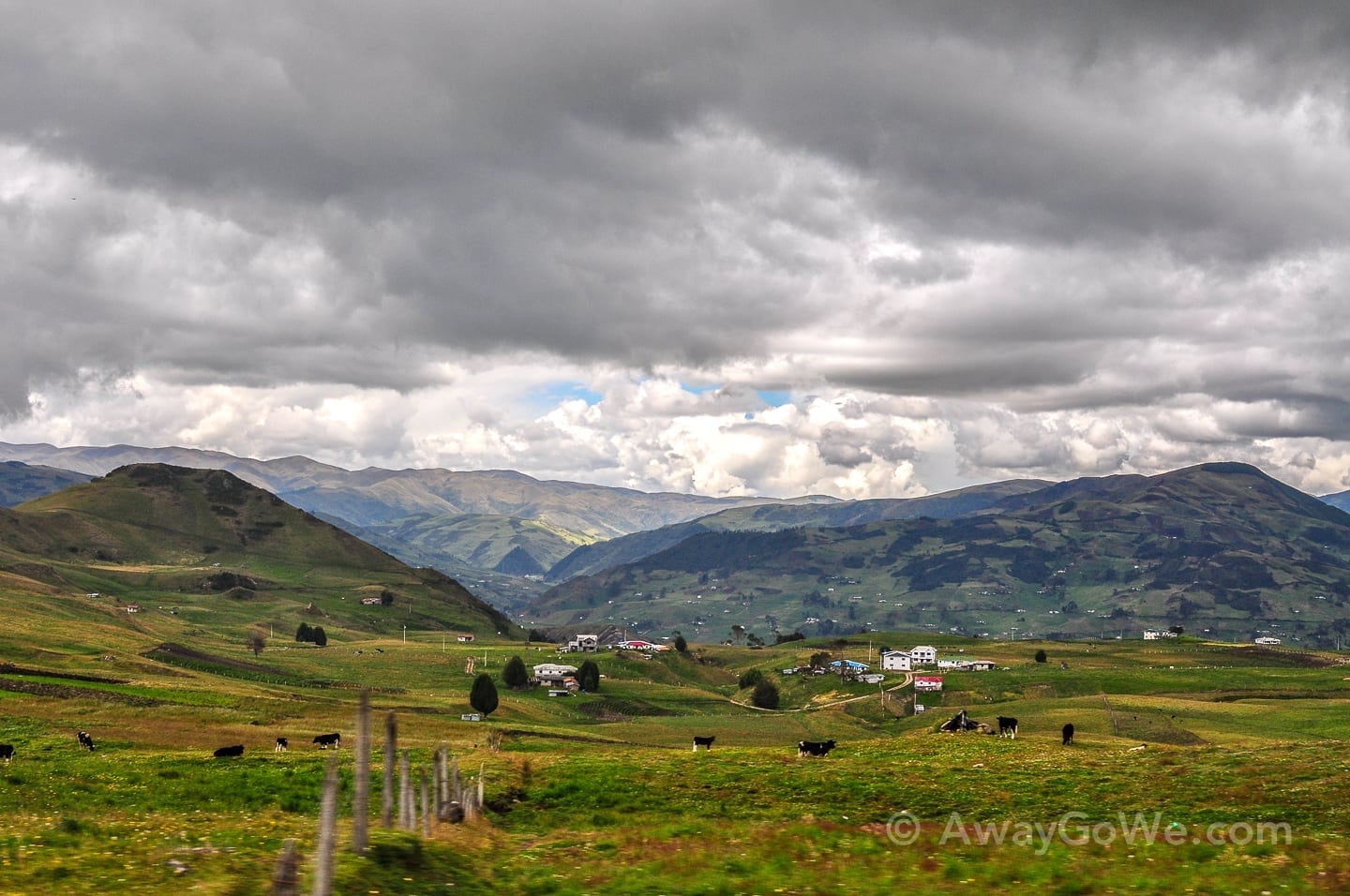 The second driver was infinitely better than the first, and not having to constantly pray left us so much more time to take in the stunning countryside.

A few hours up the road we caught up with the first bus sitting motionless with all the passengers milling about on the side of the road as two men busied themselves under the hood. Sweet, sweet karma.

Riobamba was more of a stop-over than anything, to get us within easy striking distance of Baños the next day. Our real reason for picking Riobamba over any of its neighbors was the hope of riding a train down the Devil’s Nose (La Nariz del Diablo)!

I love me some trains, particularly when the Devil is in the details…or in this case, the name. As it were, however, the devil was in the details, and nobody from Cuenca to Riobamba (we called around in Spanish to so many places) could tell us for certain if trains were still running the route or not. “You just have to show up on the day and see,” they’d tell us. That’s fine if it’s the sort of thing that runs sometimes but not others. But we knew that a massive landslide in 2000 closed the stretch for many years, but that in recent years there were plans to restore the section of line and resume service. Yet, nobody, could tell us if service had resumed. So we called ahead and booked a room in Riobamba determined to figure it all out.

So what’s so special about this train? Well, for starters, there are only a handful of functioning rail lines still plying the Andes, and the Trans-Andean Railway is one of them, if it in fact still runs at all. In it’s heyday, the TAR once ran all the way from the capital city of Quito high up in the Andes down to Guayaquil on the coast. The best known and most infamous section of the line is between Riobamba and Sibambe, which includes a hair raising descent down what is known as the Devil’s Nose, a 2,500 ft. (765m) sheer cliff. In 1902, engineers carved a zigzag route up the half-mile high rock face. It is said that while making the journey along the Nose, the locomotive inevitably derails at some point and passengers are asked to disembark momentarily as conductors use big rocks and sticks to lift the train back on the tracks. Along the way, passengers are treated to breathtaking views of volcanoes and river valleys. Sounds like fun, doesn’t it? 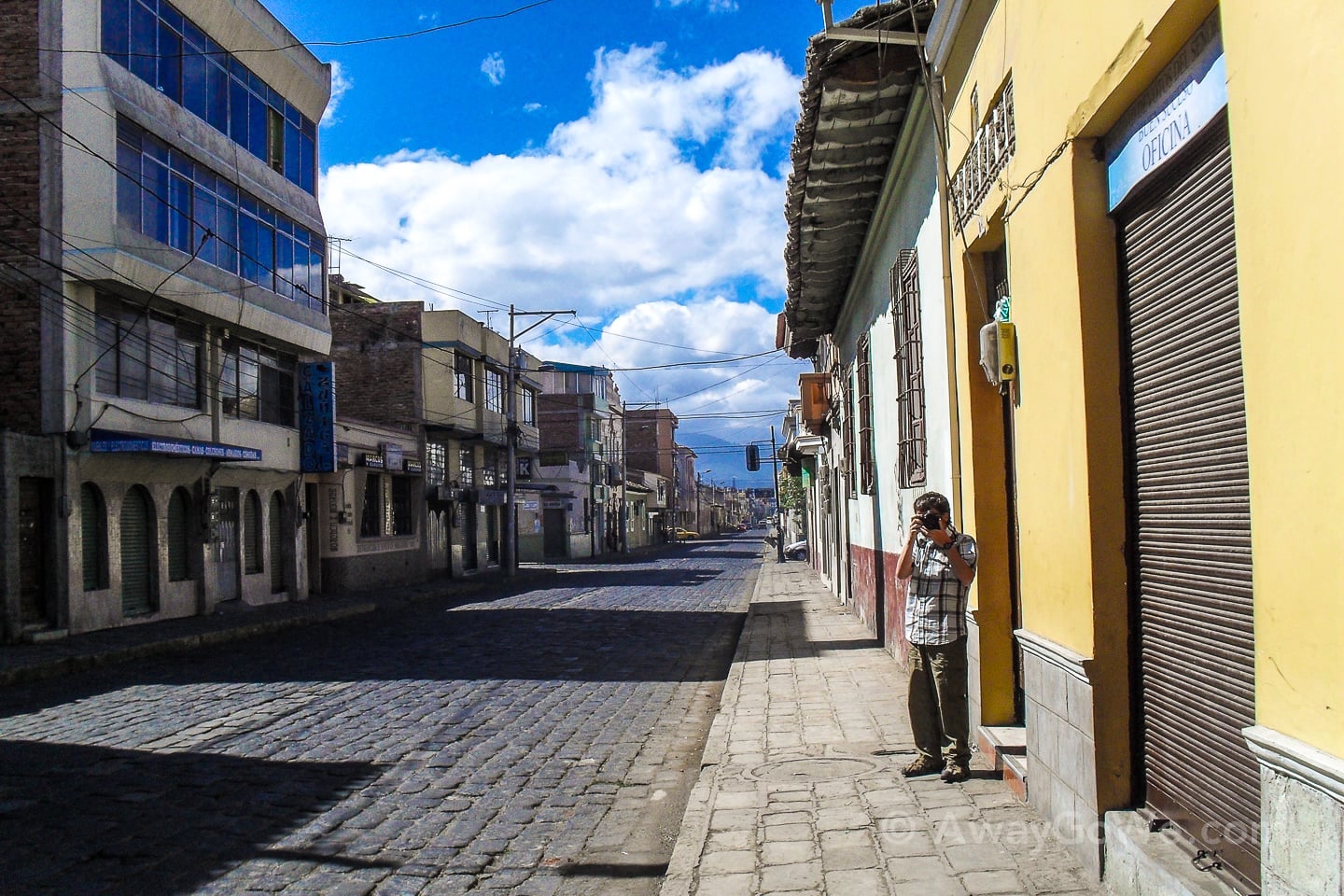 Riobamba, itself, was worth a stop, though I wouldn’t recommend everyone stop here for any longer than a night unless they have a lot of time on their hands. They were doing a complete overhaul of the part of town we were staying in (tearing up miles of main streets, sidewalks and utilities all at once, you know, that sort of thing), and the weather wasn’t conducive to seeing the massive volcano for which the city is well known, so we contented ourselves with taking in the main sights…oh yeah, and figuring out the Devil’s Nose. 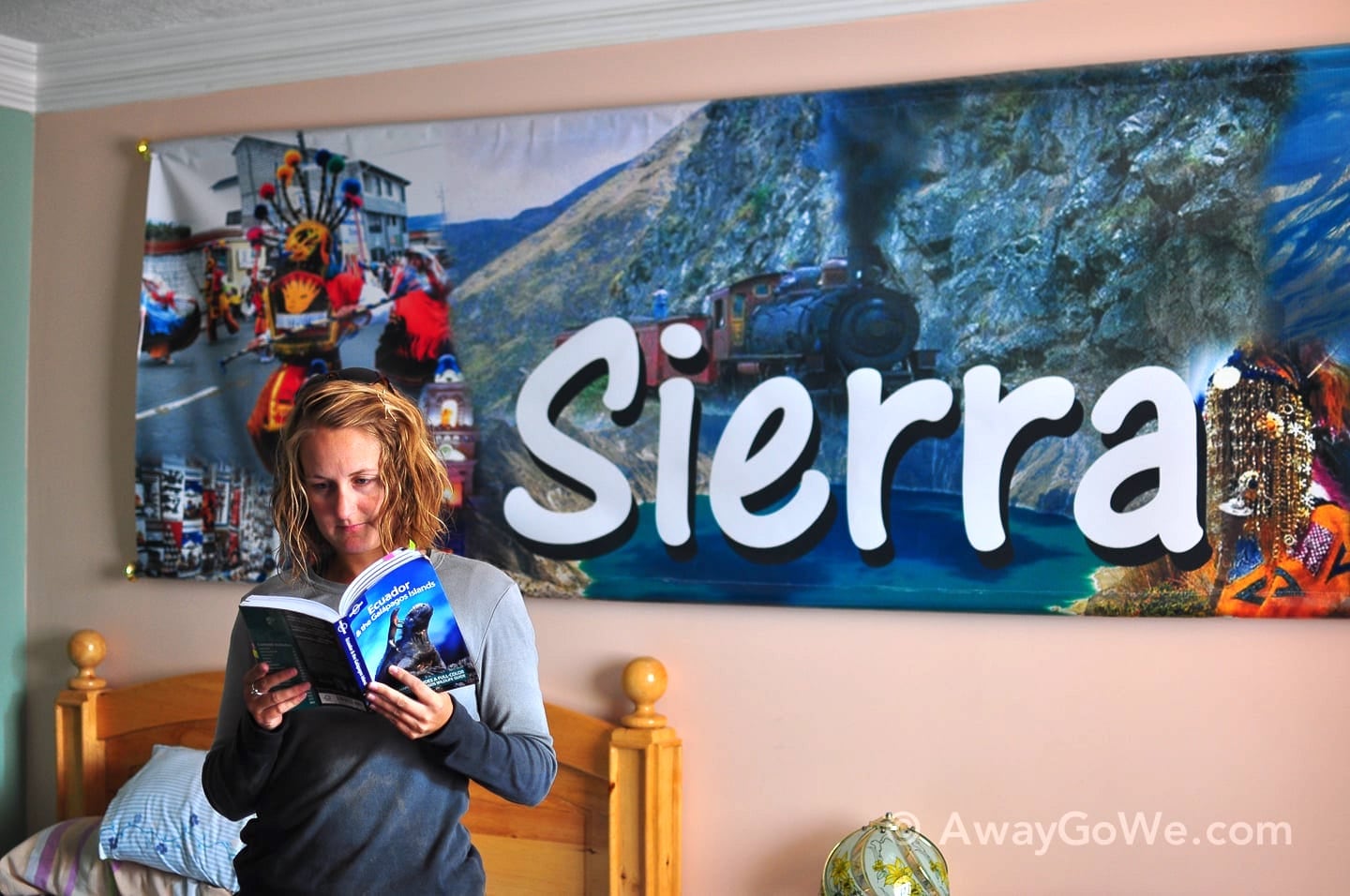 Upon check-in at our guesthouse, we asked the owner about the train and, of course, she didn’t have any additional information to offer us, and of course the station was closed for the afternoon. Fair enough, except NO! ARE YOU KIDDING??? This guesthouse is exactly ONE BLOCK AWAY FROM THE TRAIN STATION. ONE BLOCK!!! You can SEE the train station from the lobby. And the guesthouse’s name? Hotel Tren Dorado (Golden Train Hotel)!

So we would have to wait until the next morning, which ended up not being much of a bad thing after all, considering Hotel Tren Dorado is actually a great place to stay — train or no train. Plus, they had one of the most amazing buffet breakfasts, ever. No joke. 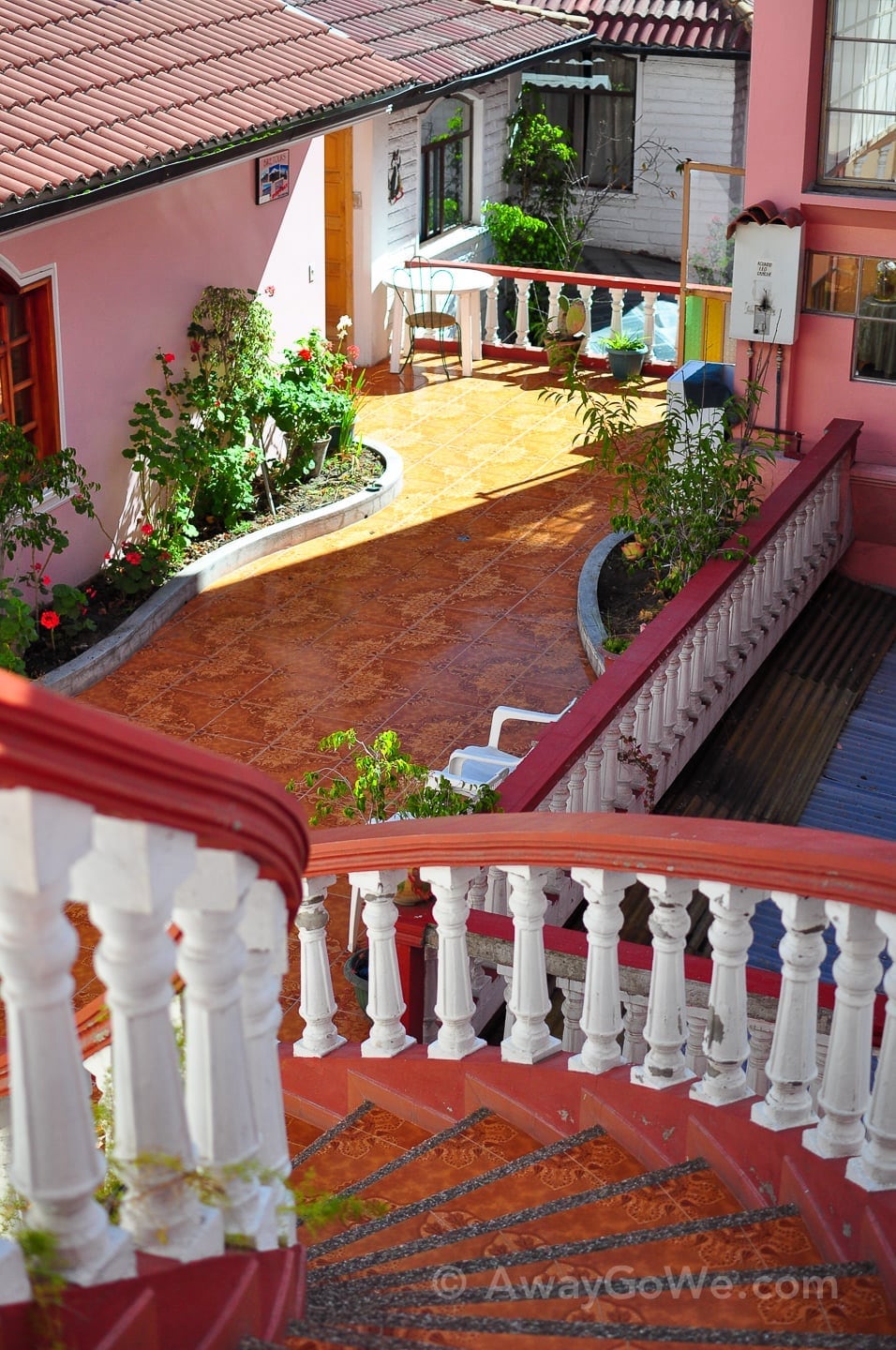 After breakfast, we walked over to the train station, but of course the gates were locked and no one was around. But the place still looked semi-functioning and it was still early. The sun was out, so we took a stroll around the city to pass the time. 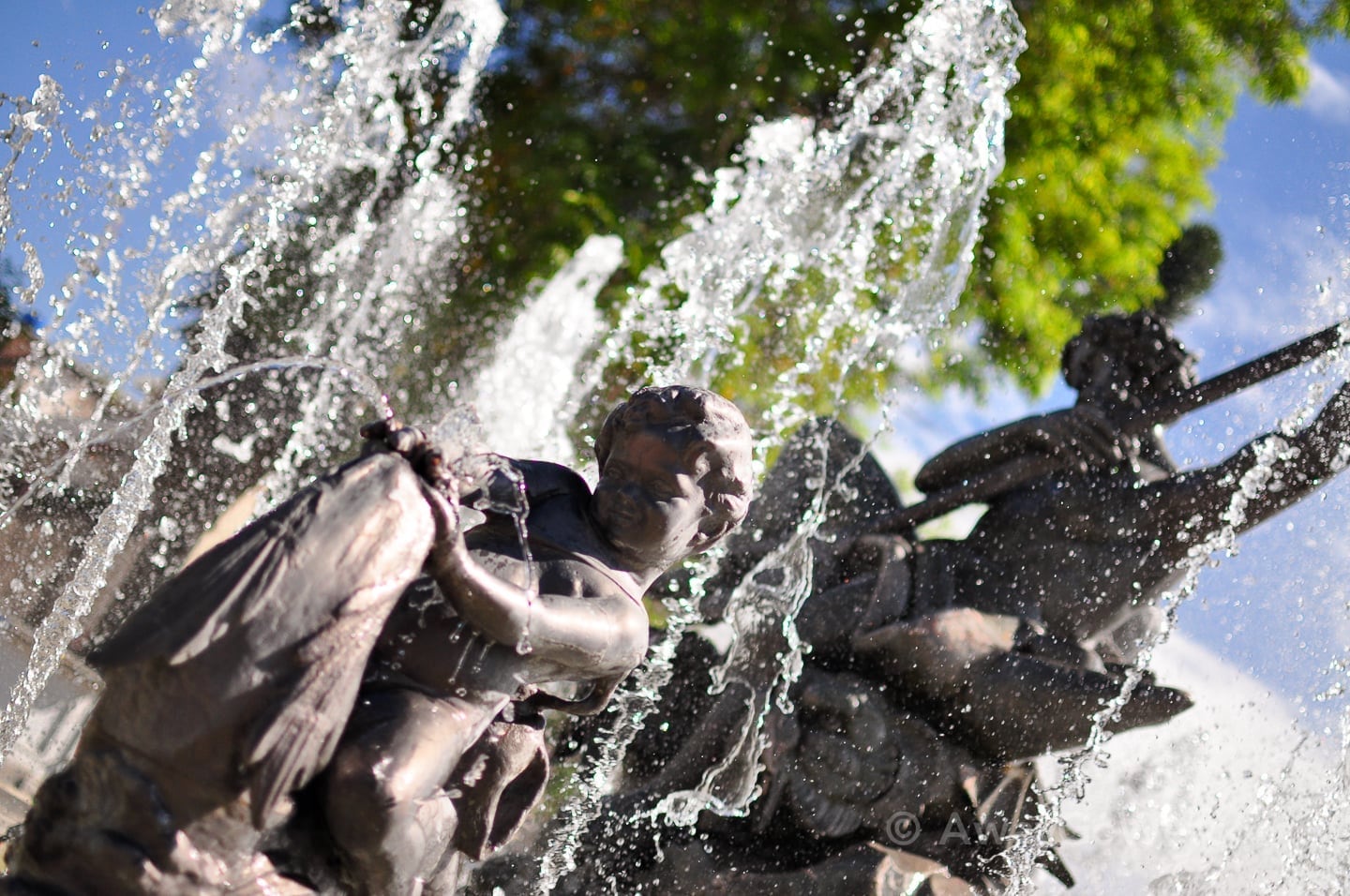 Like any Ecuadorian city of any size, Riobamba’s got it’s share of churches and cathedrals, as well as well cared-for remnants of its colonial past. 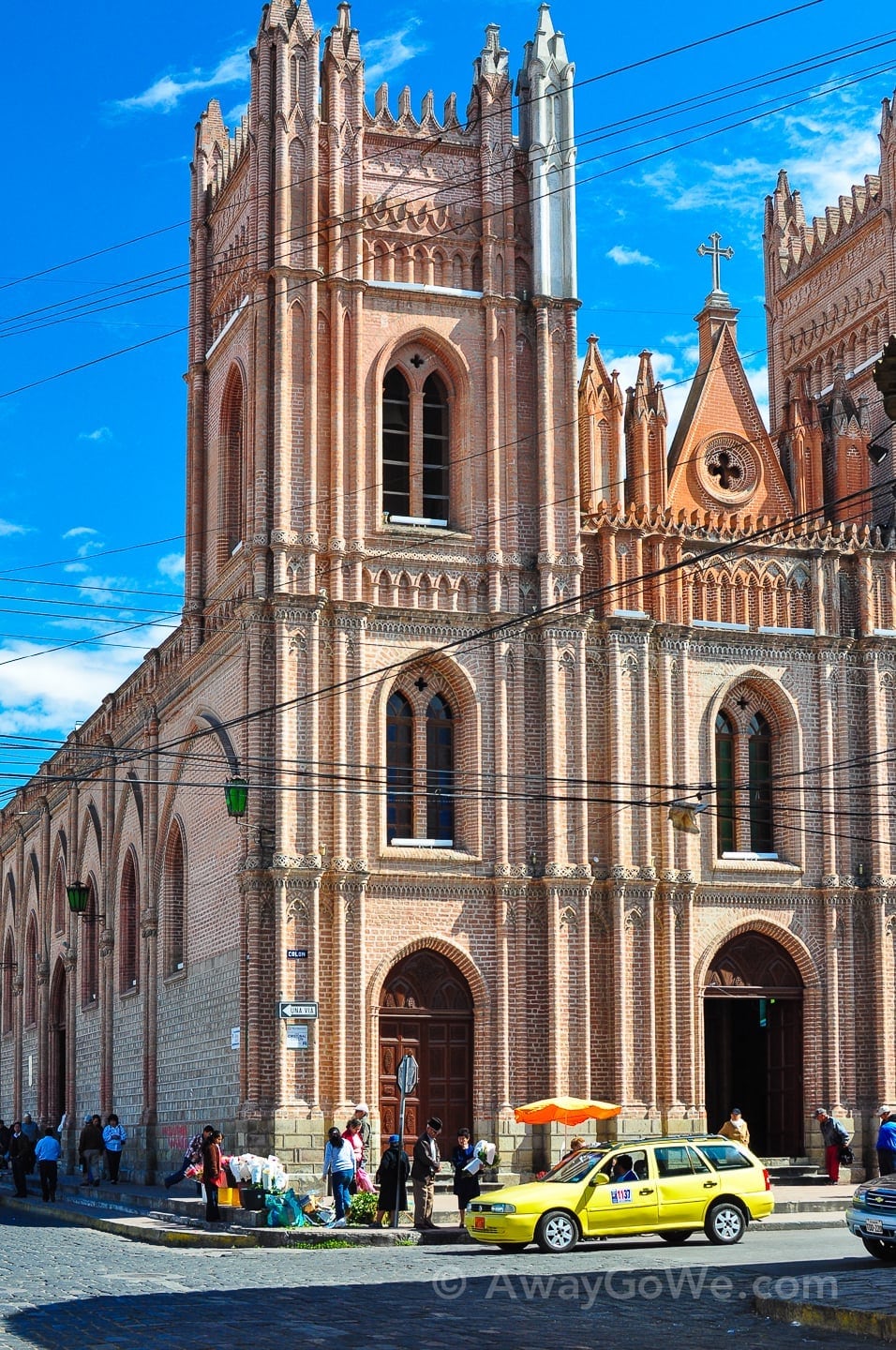 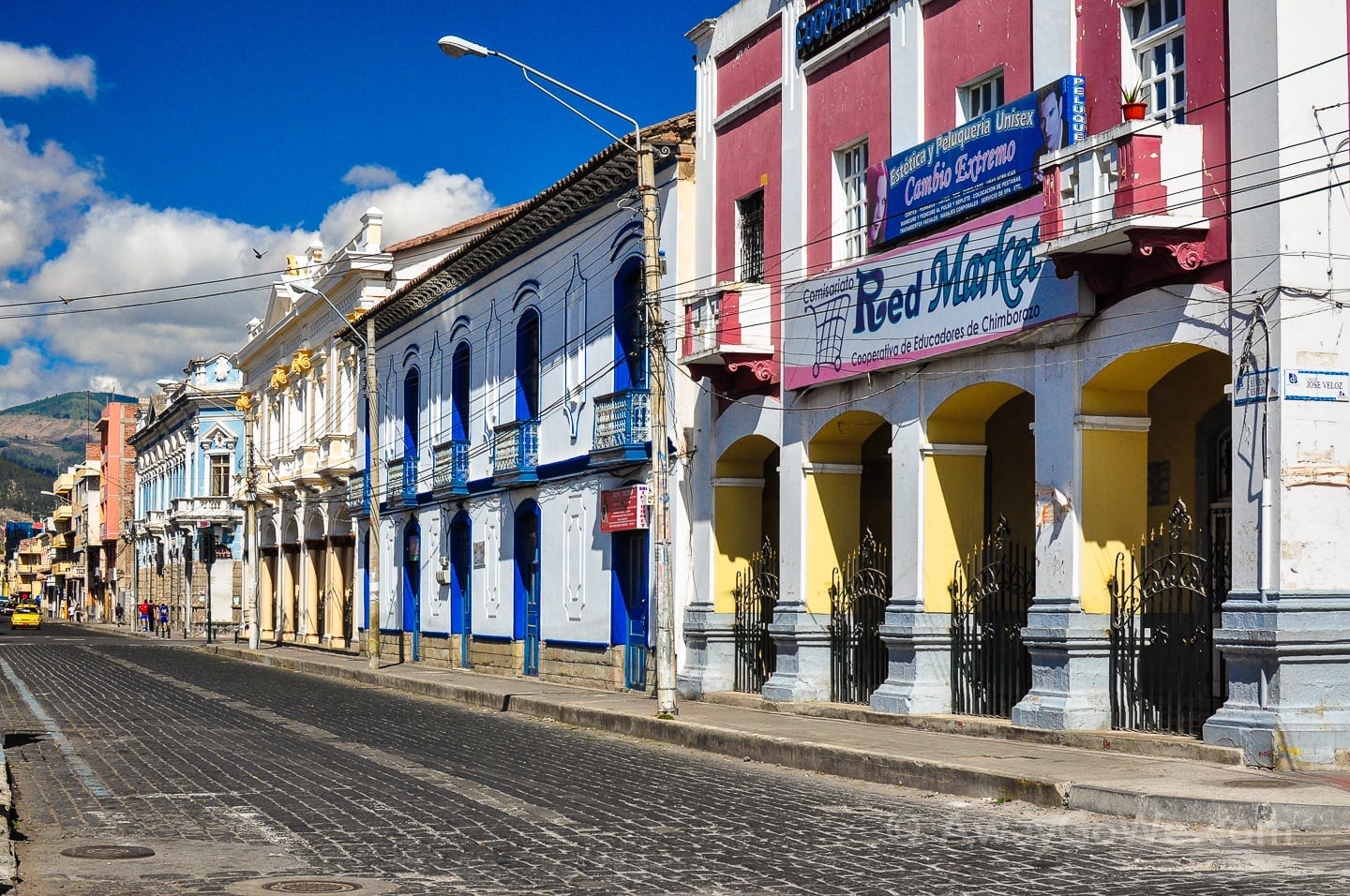 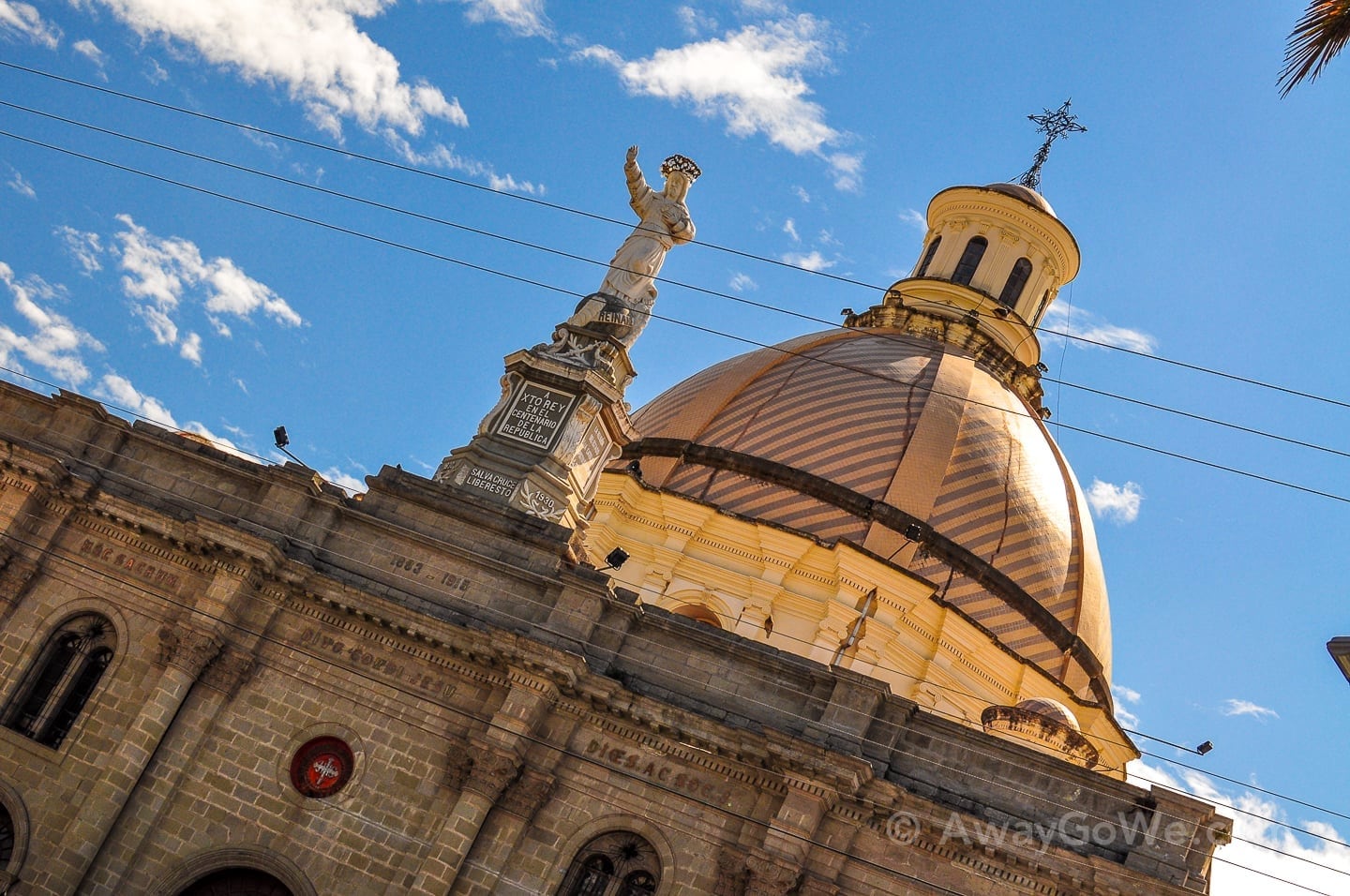 We also heard that they have a pretty great Saturday market here. This being Sunday, however, we were a day late. Guess we caught a few stragglers. 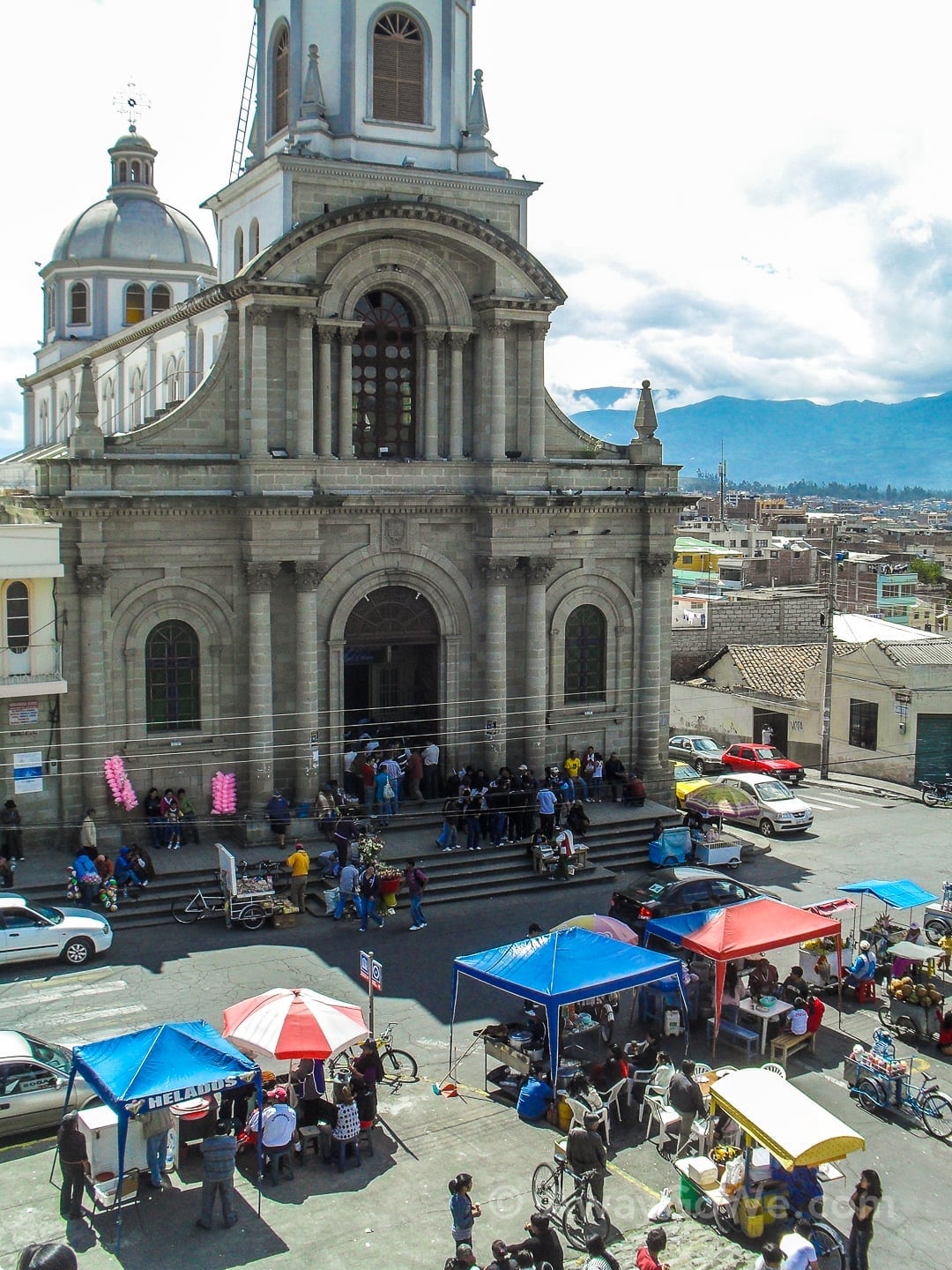 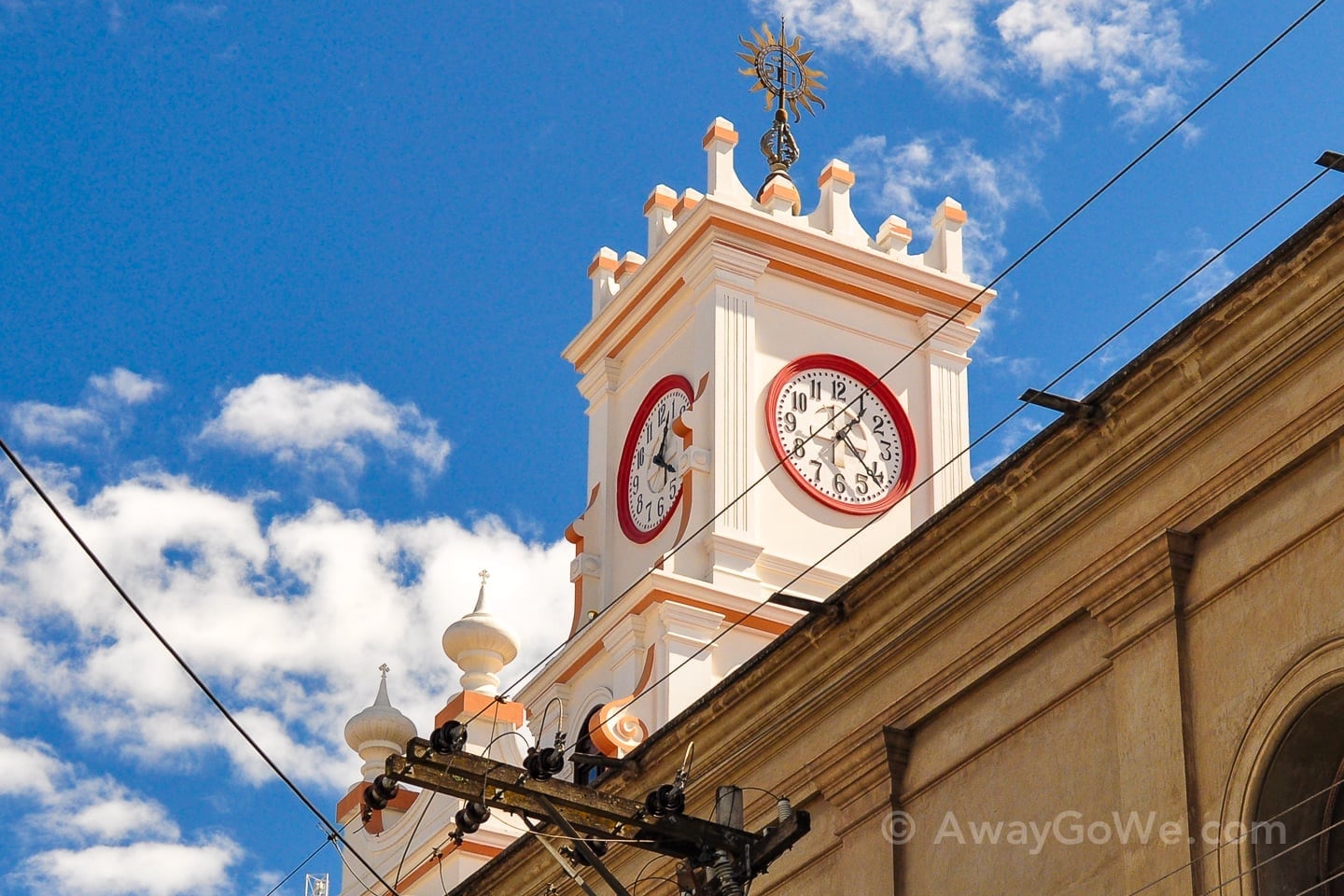 Some time later, we made it back to the train station with the same result as twice before. Well, I guess that’s, that. We packed up our things and grabbed the next bus to Ambato, then on to Baños 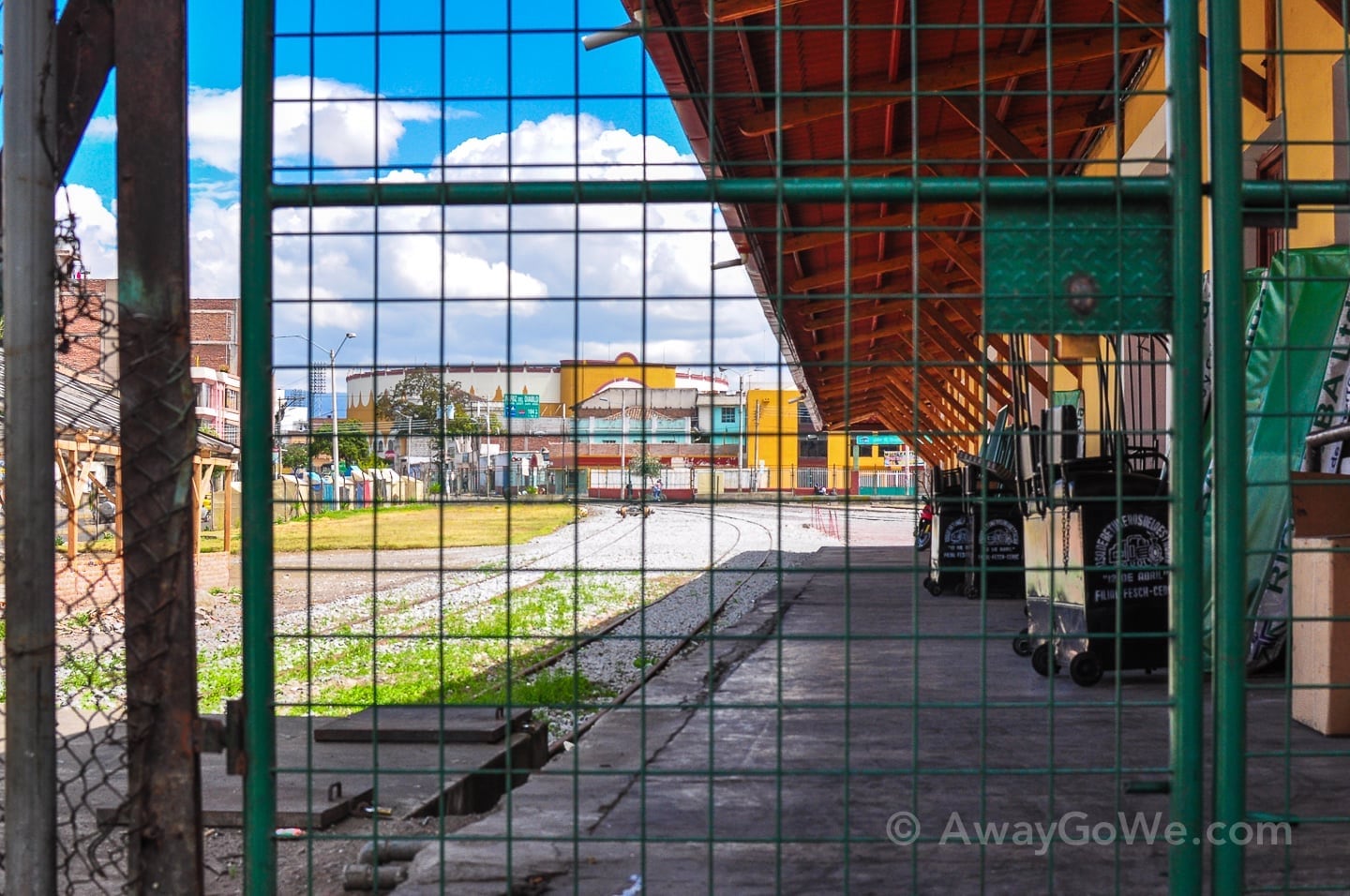 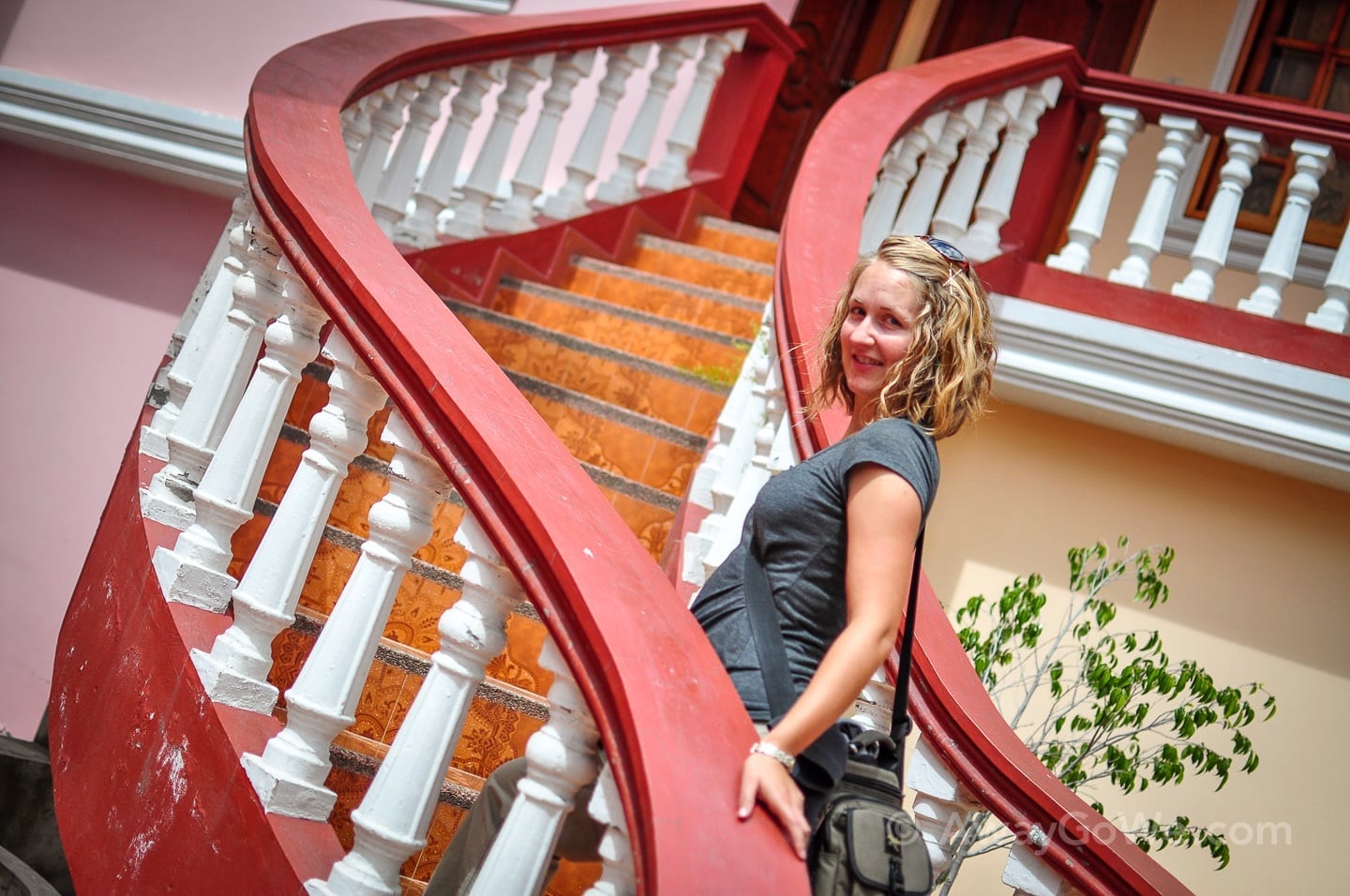 Cruising along a windy road in a big ol’ bus full of people, we’re enthralled by the scenery out our window and serenaded by Michael Jackson’s Greatest Hits on repeat and the sounds of a gringo in the rear seat puking out the window. Ah, que fantistico. 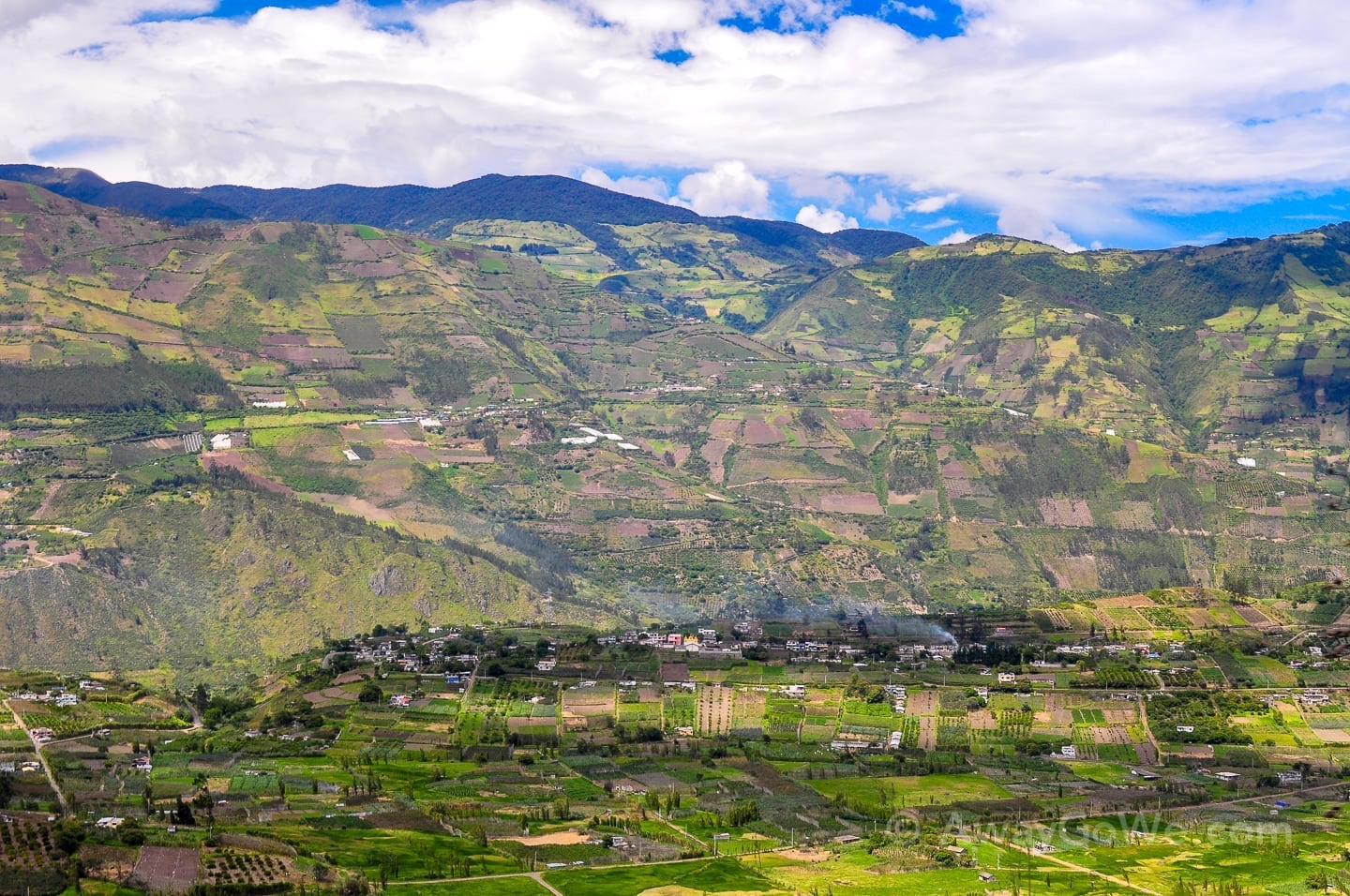 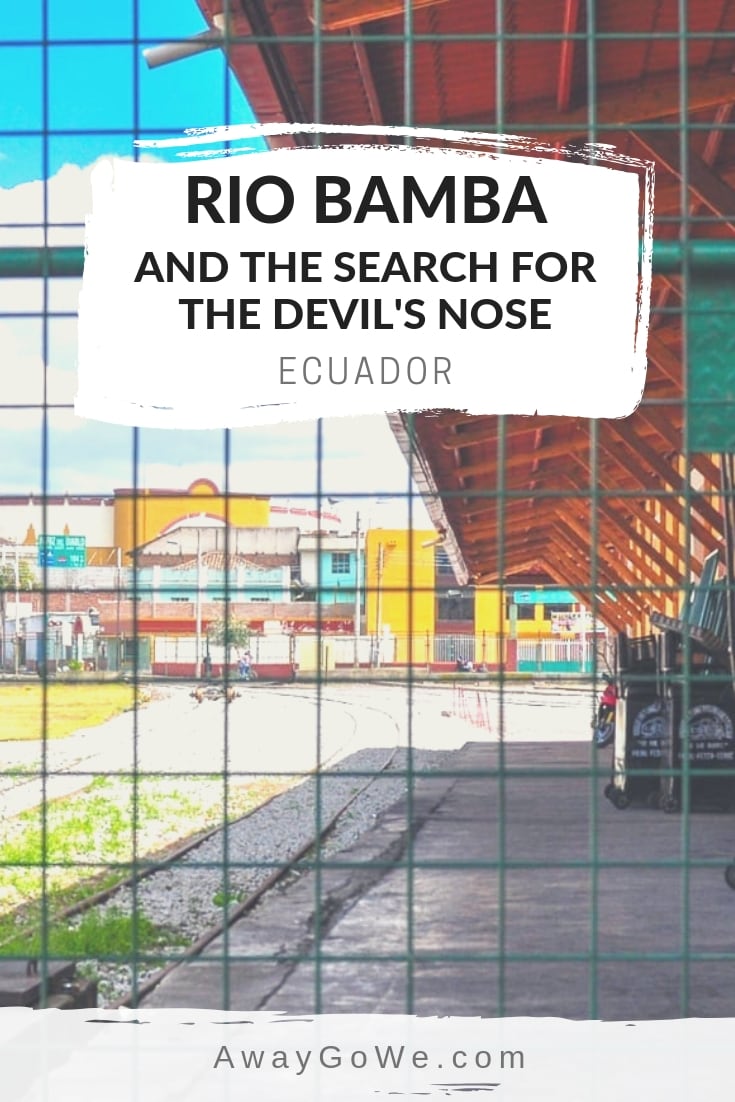