Cuenca was our first overnight stop in Ecuador after spending a month in Peru, and we could already tell on arrival that Ecuador was going to be a whole new ballgame.

Before crossing the border, it hadn’t registered in our minds how much more developed Ecuador would be over Peru, and making Cuenca our first stop made the gap even clearer. An American, with some Spanish skills and some money, could very comfortably make a home in Cuenca, and indeed many do. It’s a clean, well-organized, and cosmopolitan city with most of the amenities of the U.S. Yet, Cuenca is also rich in distinctive culture, traditions, people, food and music all its own, and doesn’t feel like it’s been tainted by outside influence.

Believe it or not, Cuenca is also the birthplace of the Panama Hat as we know it today (not Panama), and there’s even a museum devoted to all things Panama Hat. While numerous artisans still carry on the tradition of weaving the Paja Toquilla, fewer than a dozen or so weavers capable of making the finest “Montecristi Superfinos” exist today. 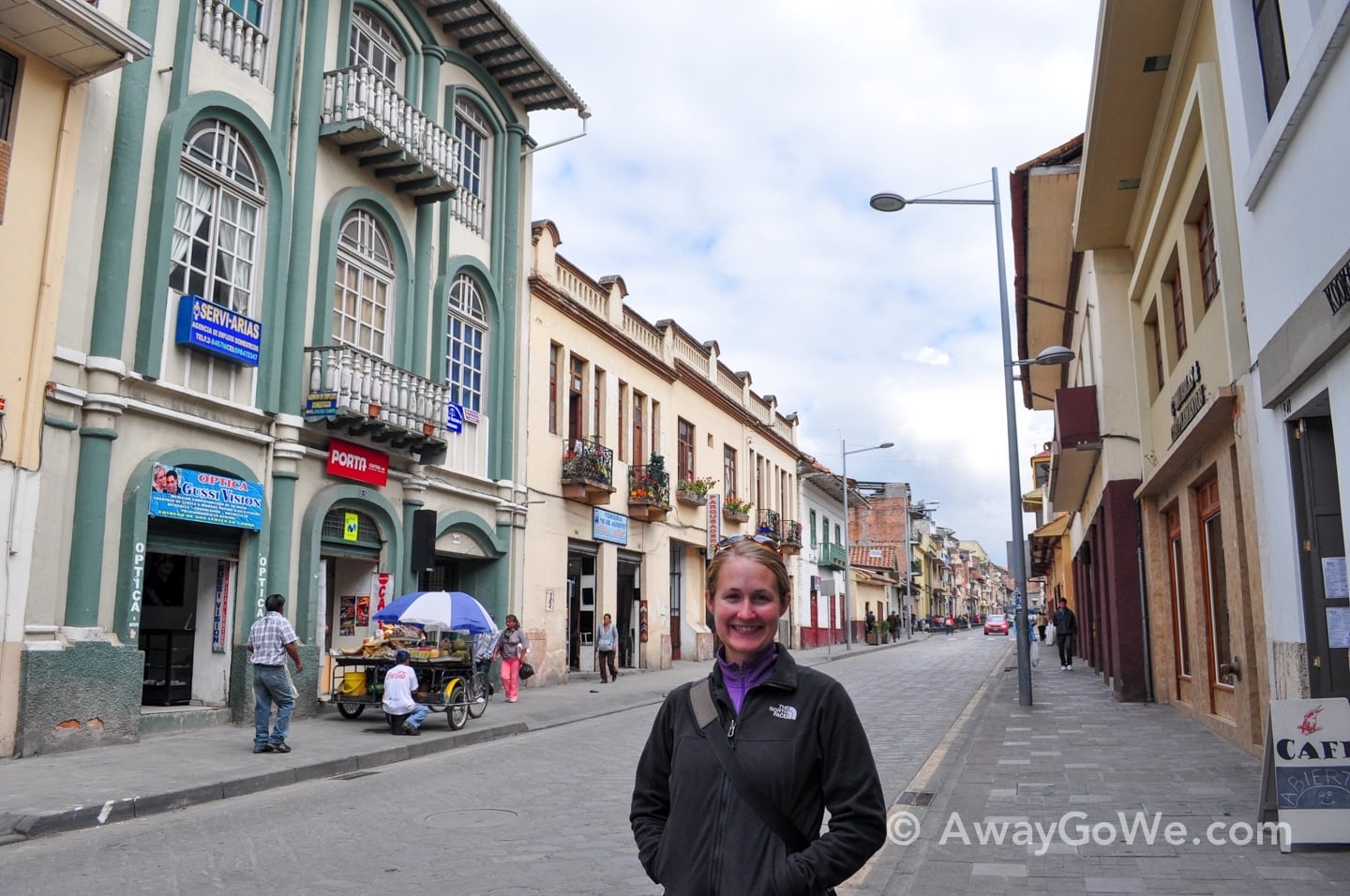 The bus ride up to Cuenca from Machala was one of the more harrowing we’ve encountered. What has to be the mother of all highway detours (or at least a very close relative), consisted of slowly plying dozens of miles of virgin road — freshly plowed and blasted — for what seemed like hours.

We were quite relieved to find a city such as Cuenca waiting for us on the other end of a very long and exhausting travel day.

Cuenca is loaded with historic churches and cathedrals, but the Grande Dame of them all is the Cathedral of the Immaculate Conception, or simply, New Cathedral. 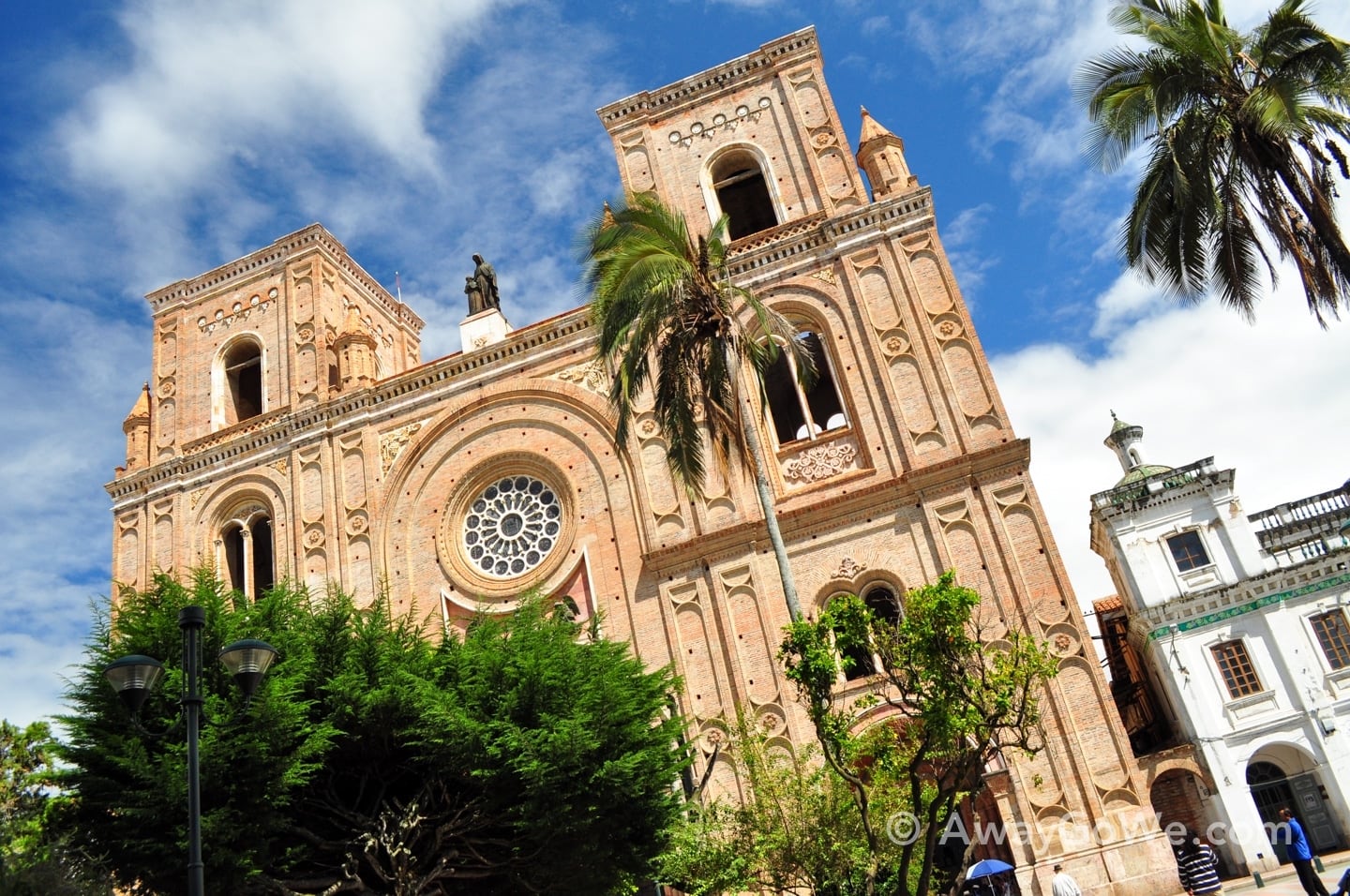 And by “new” they mean newer than the Old Cathedral which workers broke ground on in 1567. This New Cathedral broke ground in 1885 and was completed in 1975.

Above, is the front facade of this massive structure. If it looks a little funny to you, that’s because the cathedral towers never realized their full height but were truncated due to a slight error in calculation by the architect (the foundation had not been built to accommodate the added weight of the towers…oops). I guess that’s what happens when a building this huge and complex is constructed over nearly a century. 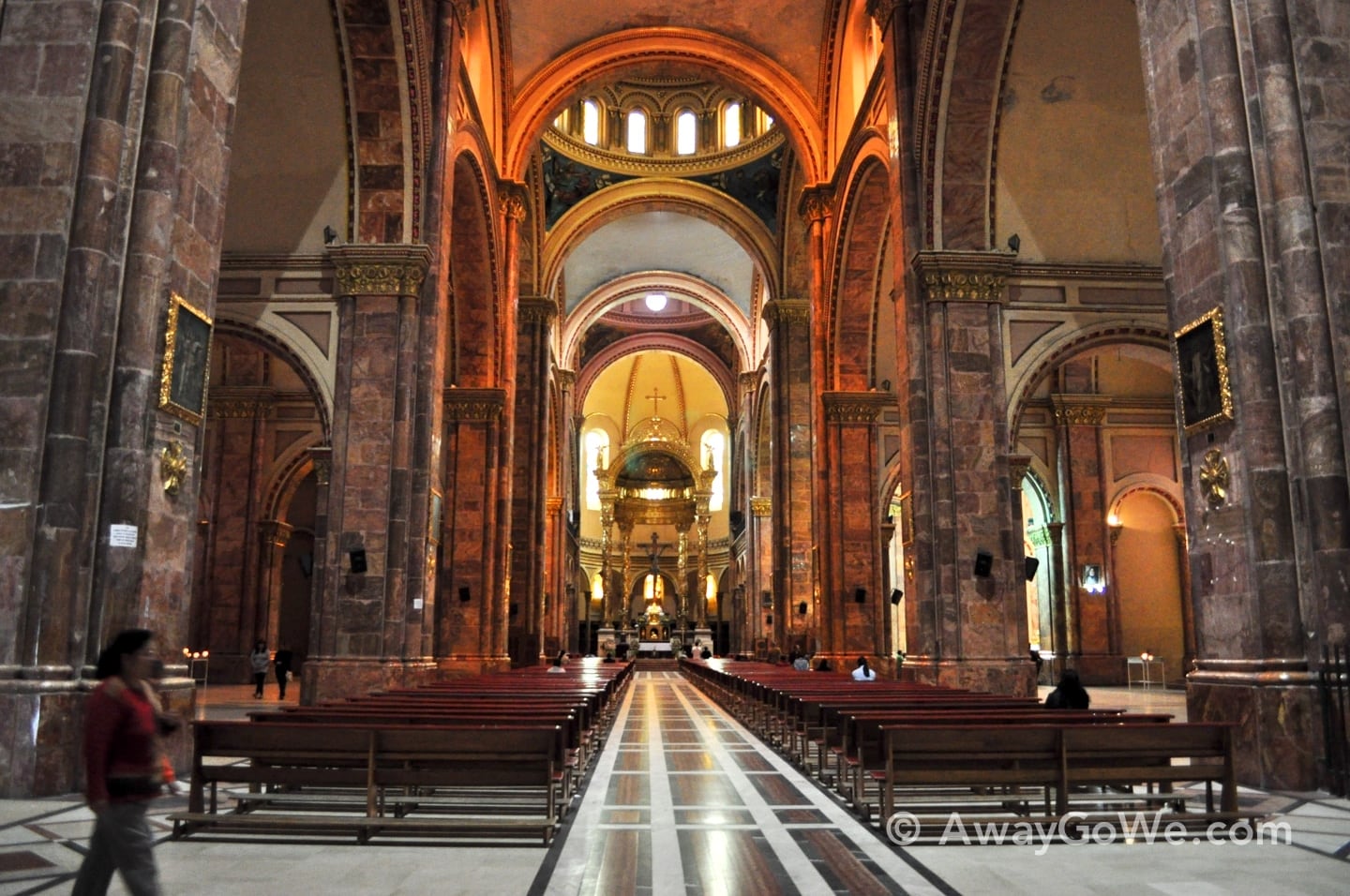 And if the cathedral looks enormous, that’s because it is. It was originally envisioned to be able to hold the entire city of Cuenca! While never fully realized, it did come close — at one time the building was able to accommodate 9,000 out of Cuenca’s 10,000 inhabitants. However, with a current population pushing half a million, 9/10ths of the city’s population just isn’t going to fit anymore. 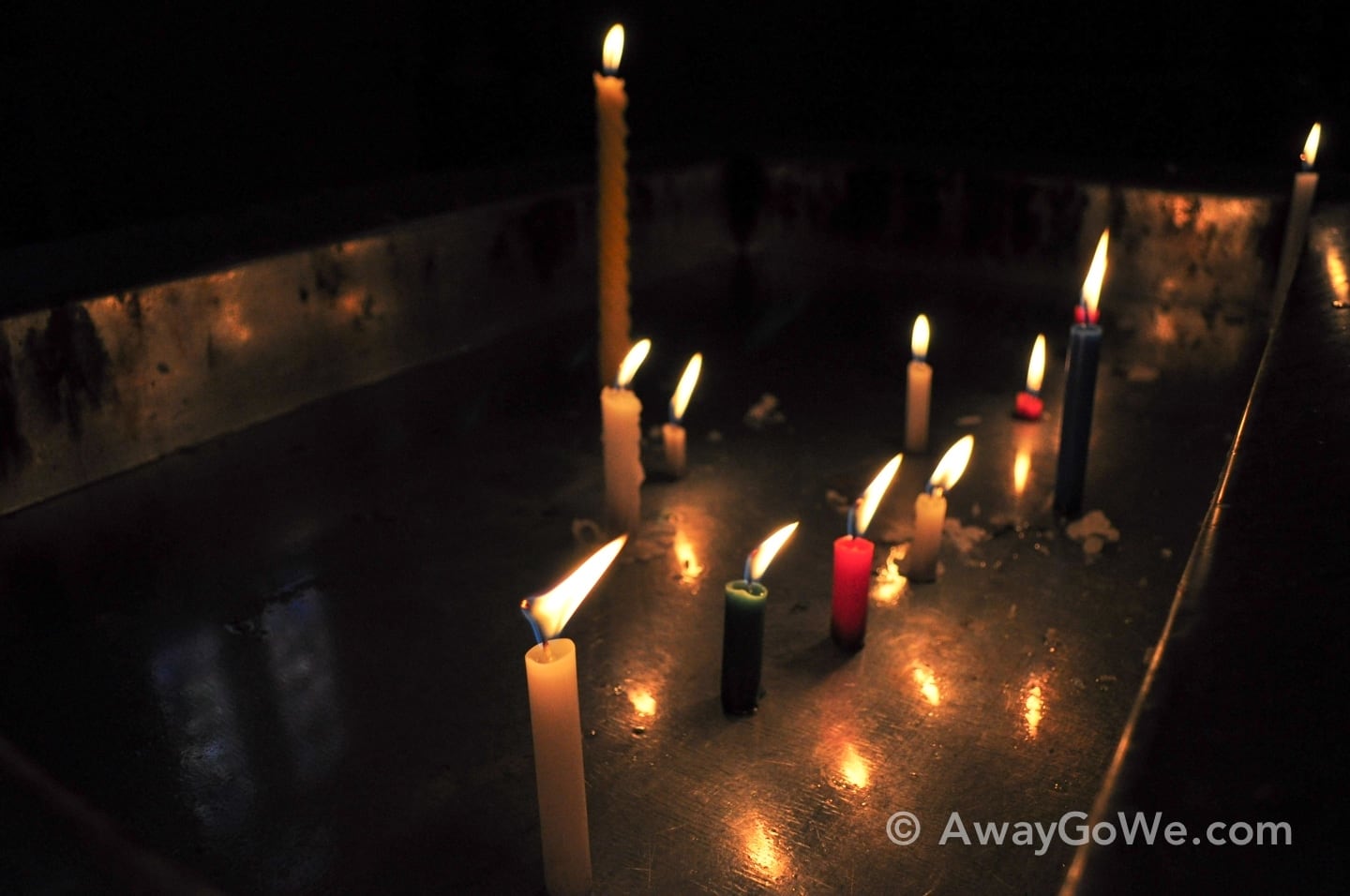 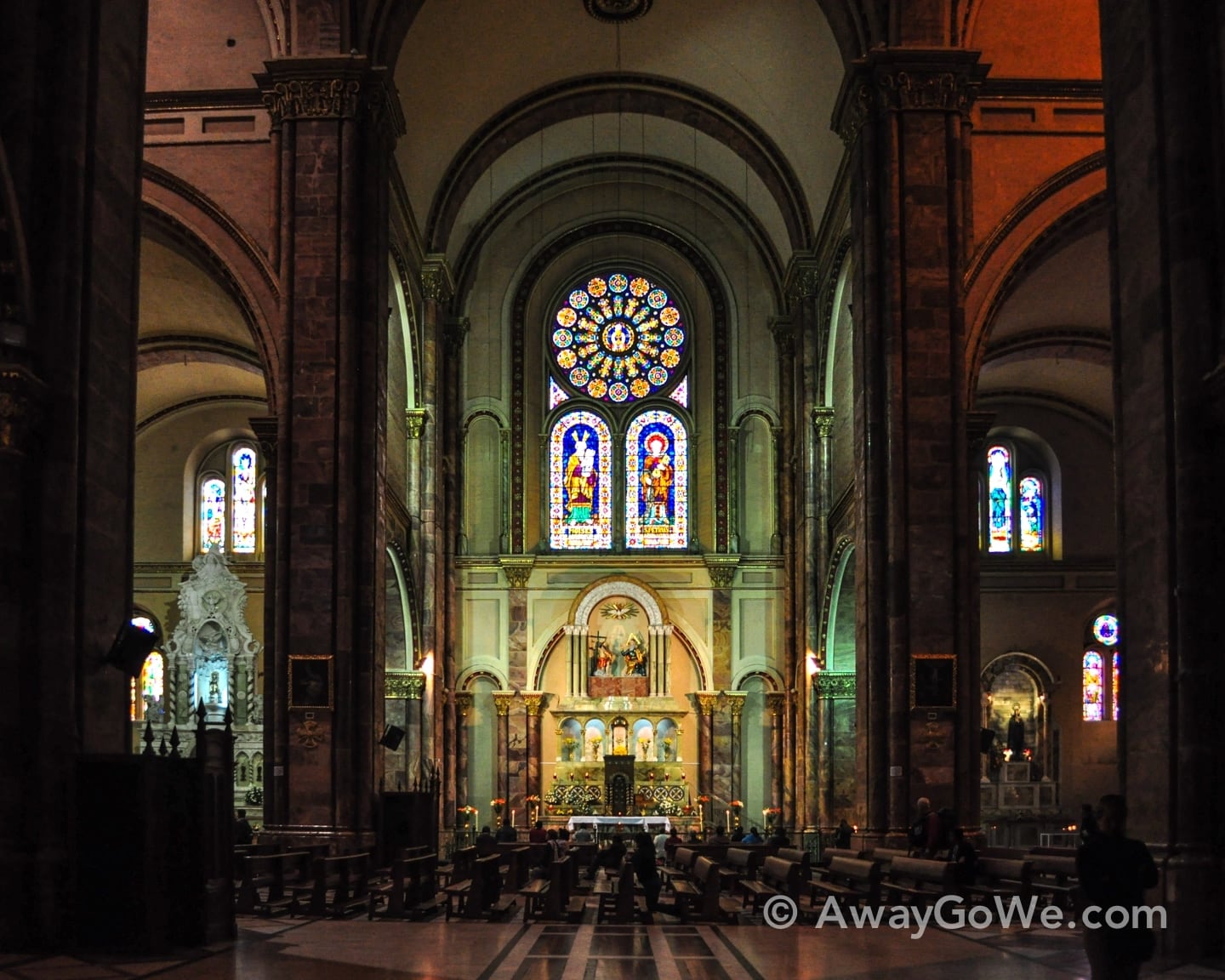 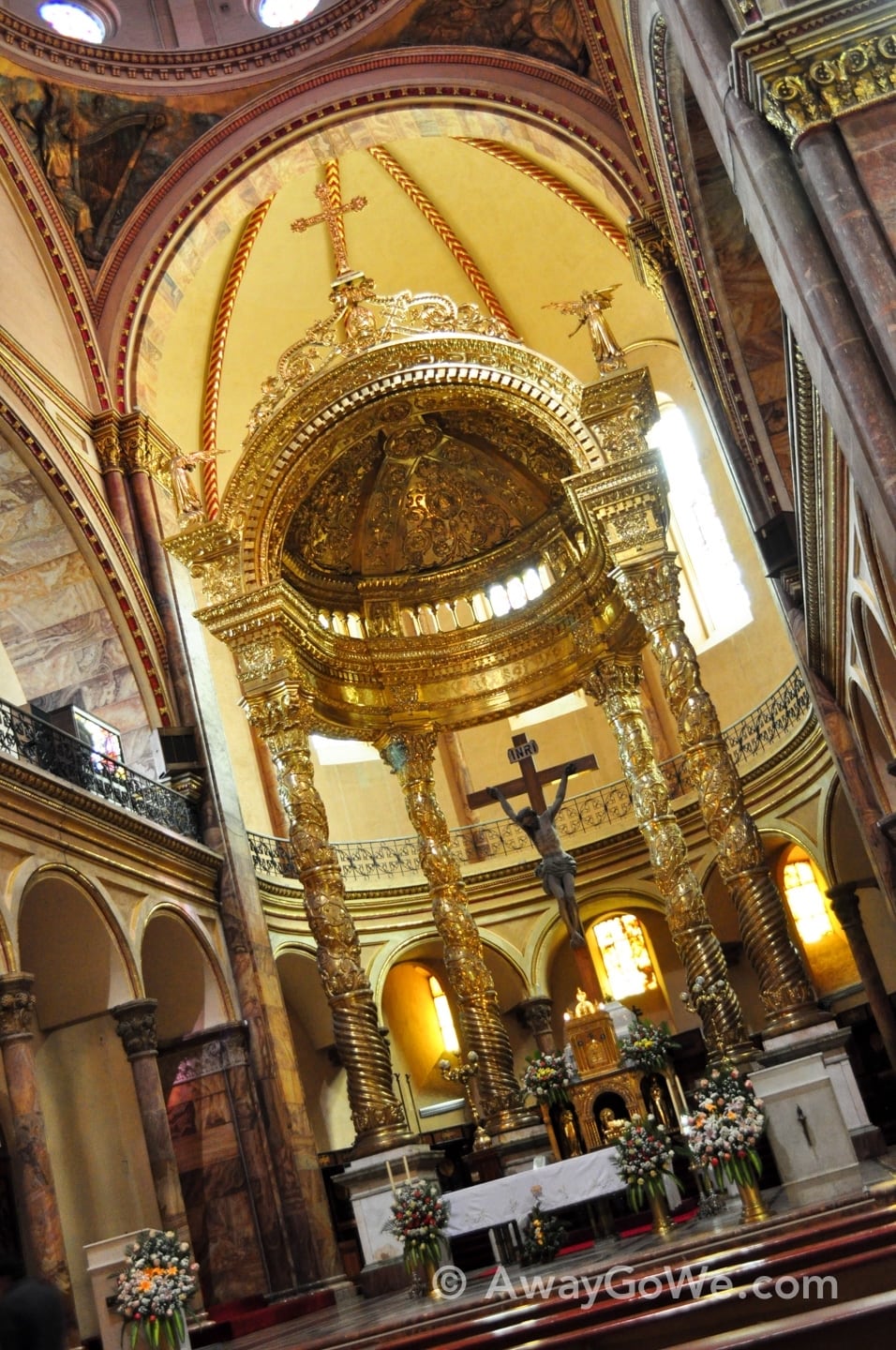 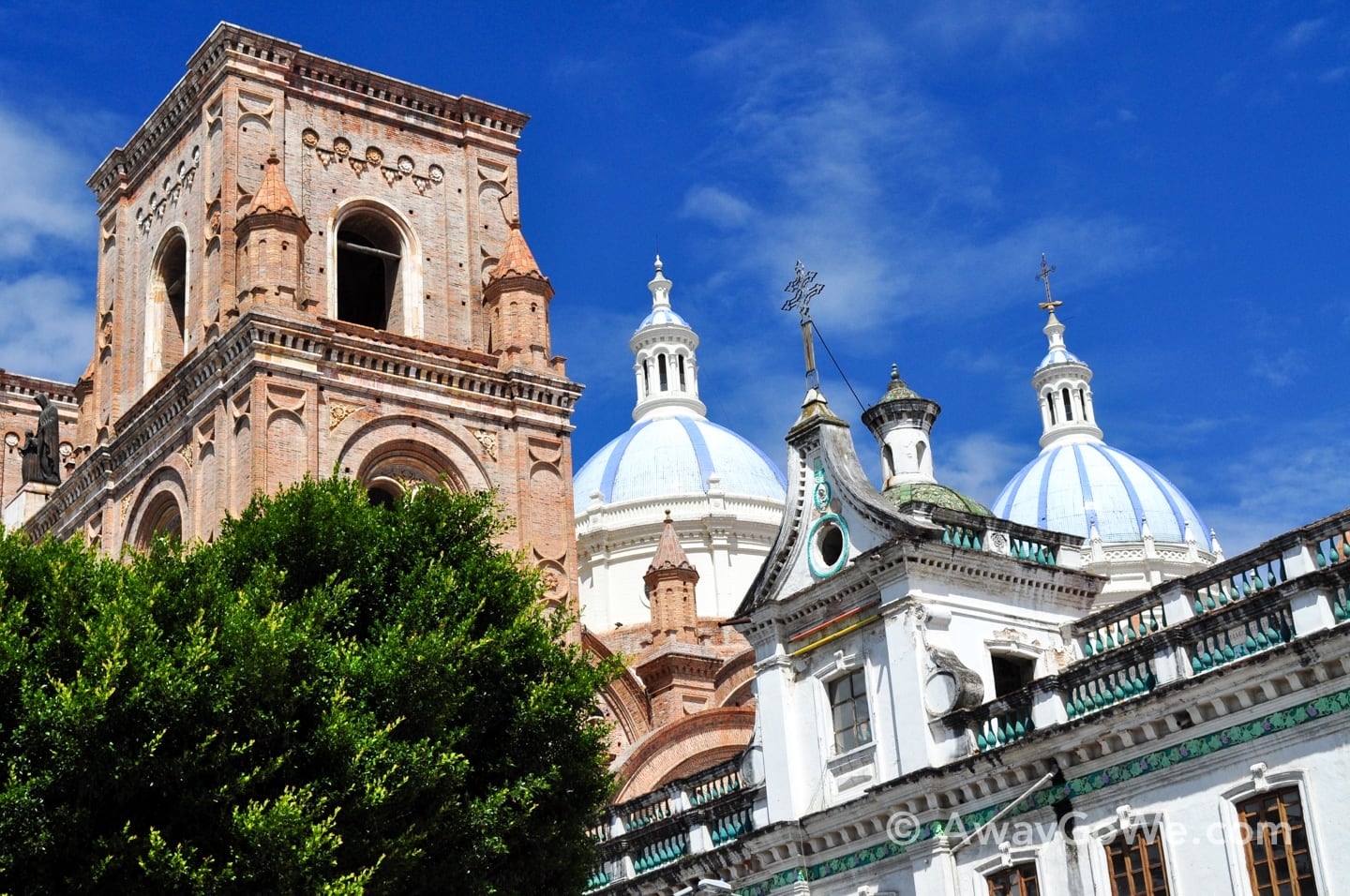 It may not surprise you by now to learn that the core of the city has also been designated a UNESCO World Heritage site. 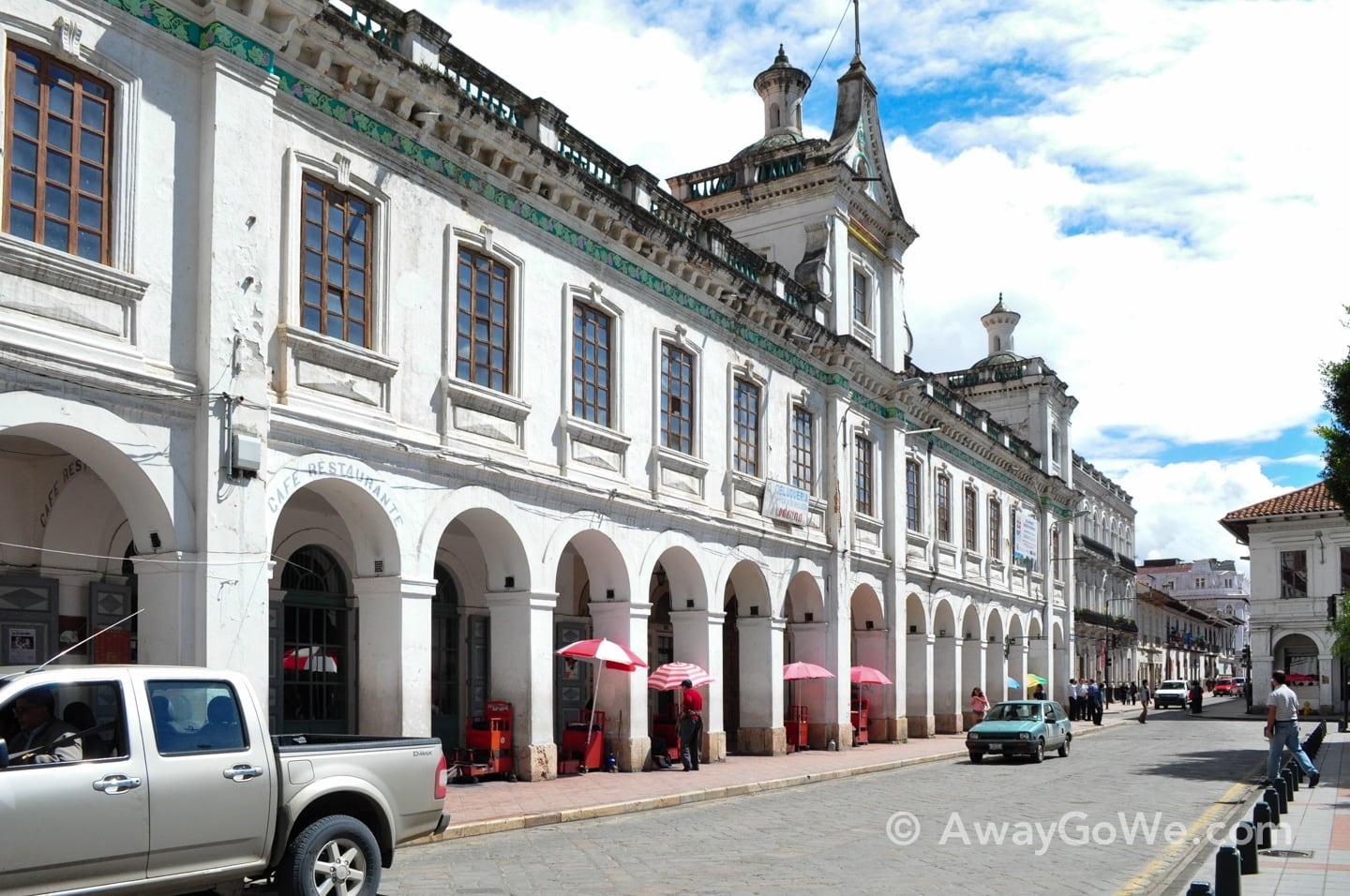 Funny thing about them Panama Hats… They’re actually women’s attire in Ecuador, or at least they started out that way. If you see an Ecuadorian sporting a Panama Hat, chances are, it’s a woman. 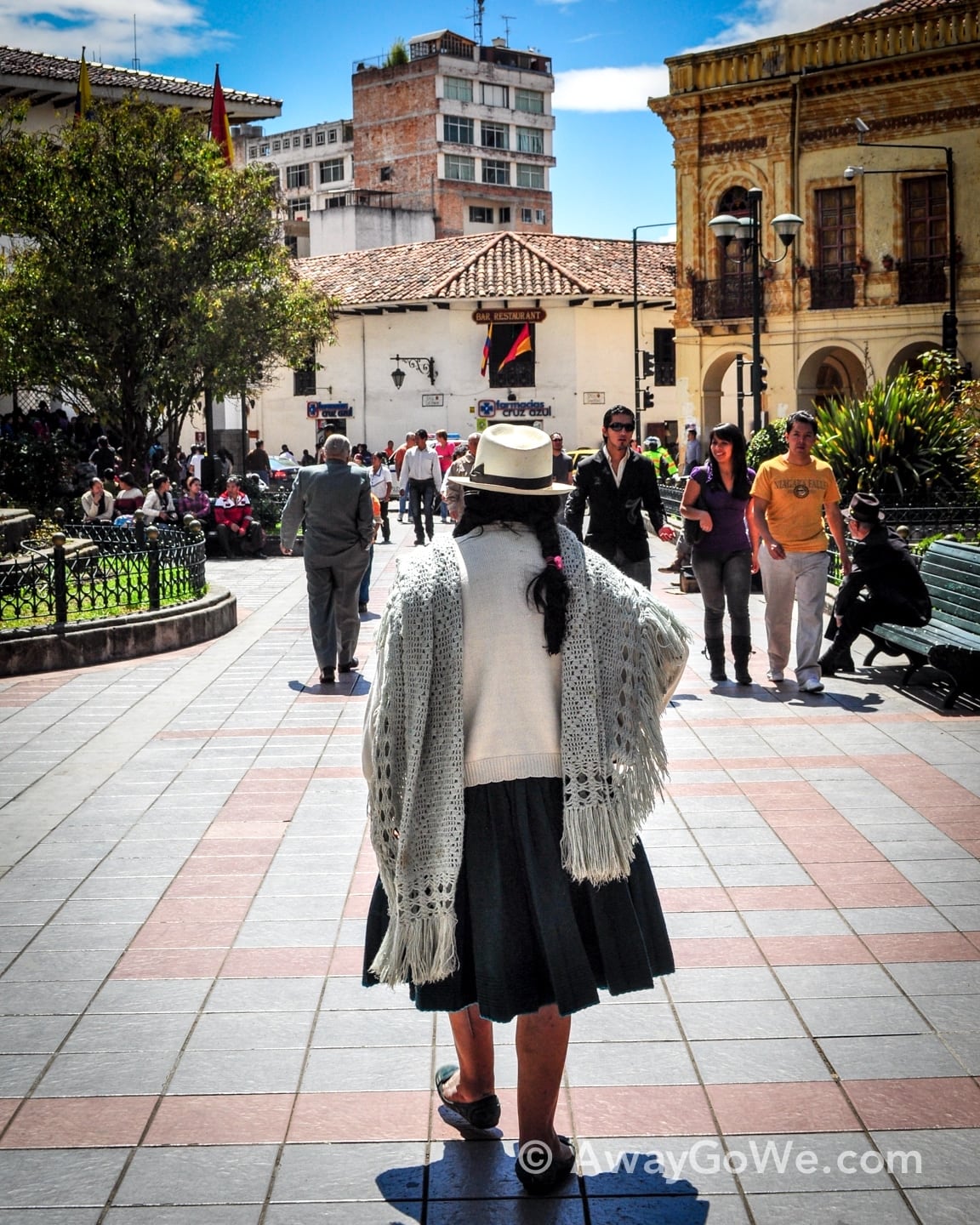 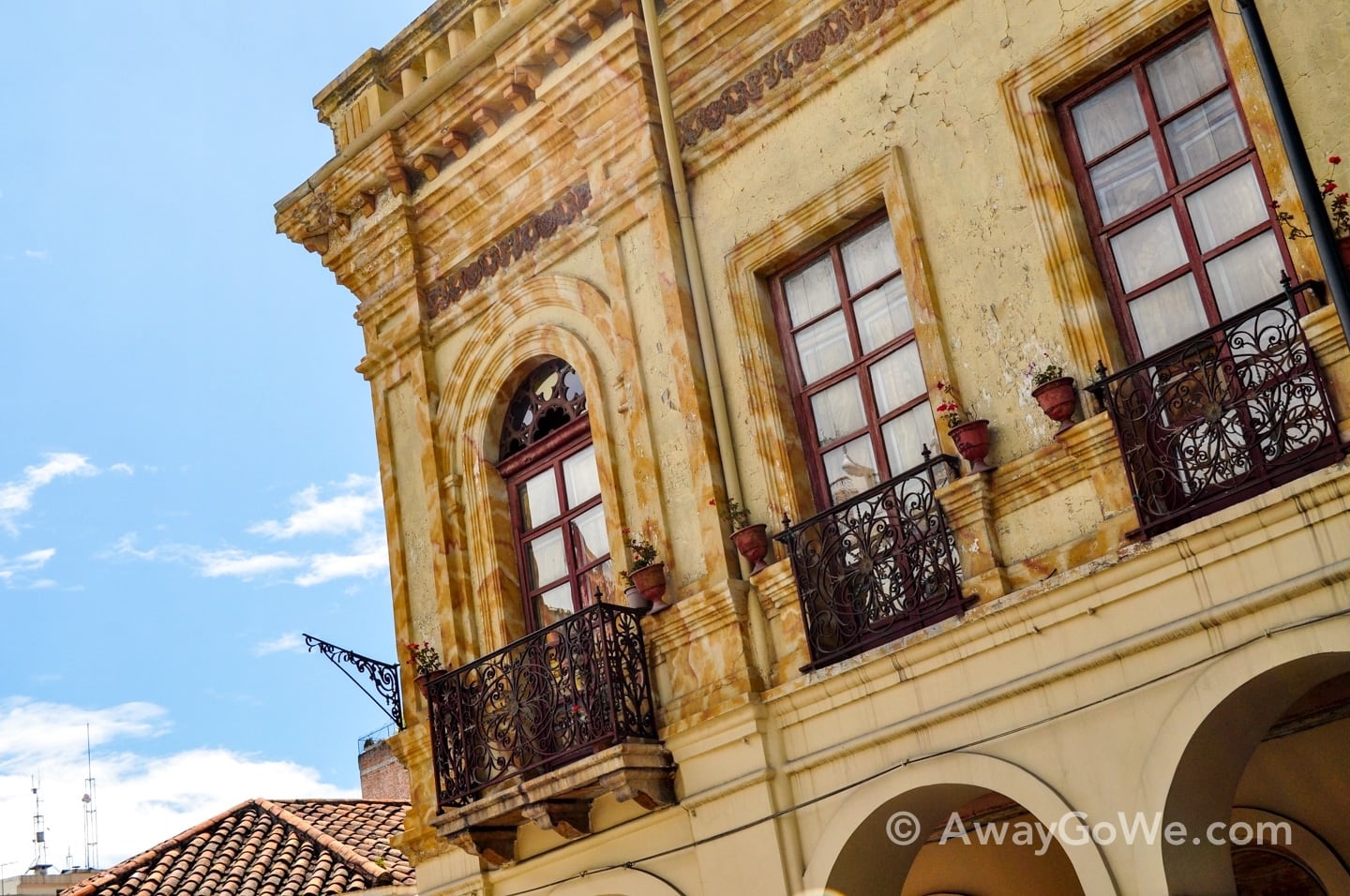 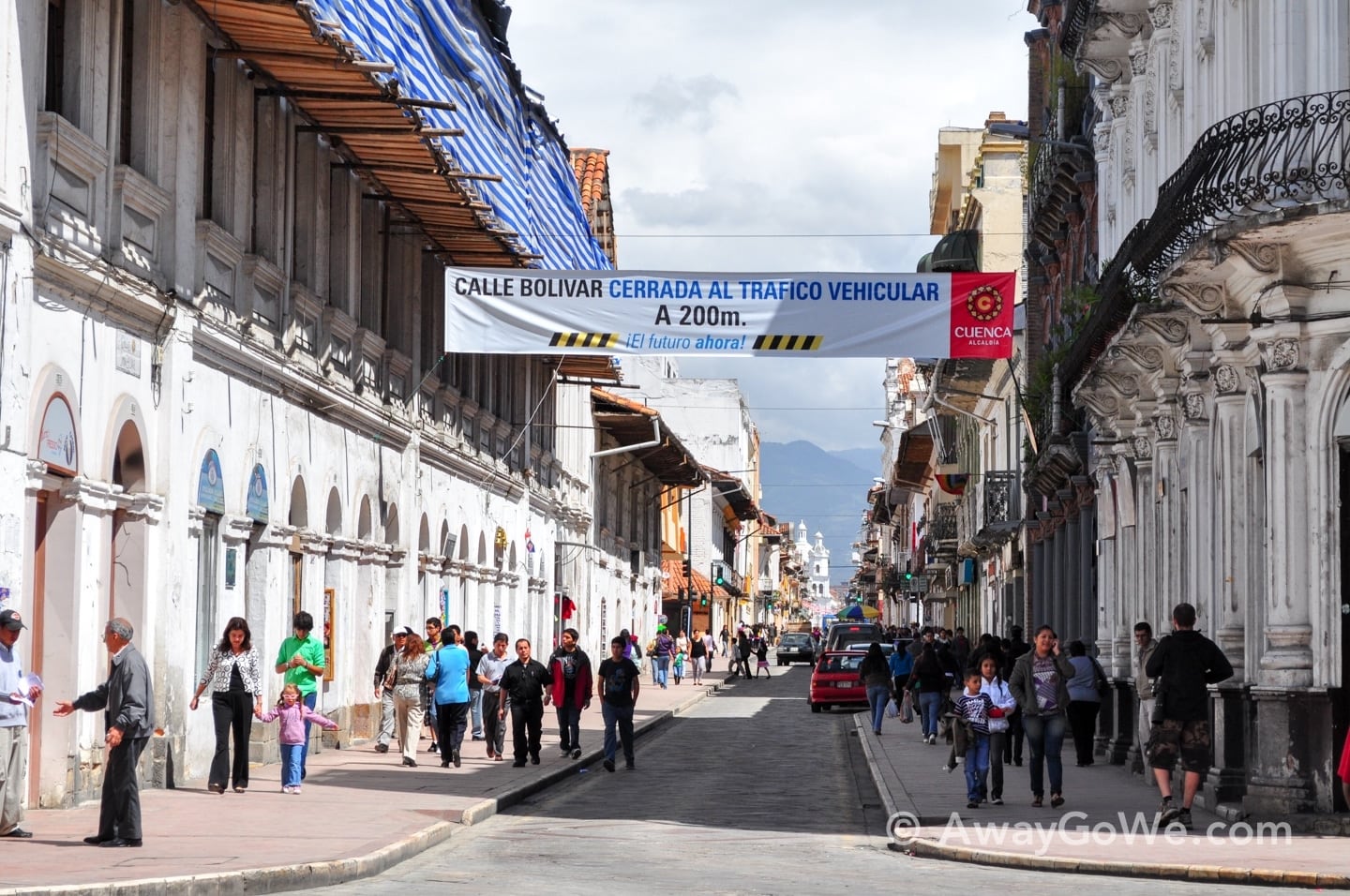 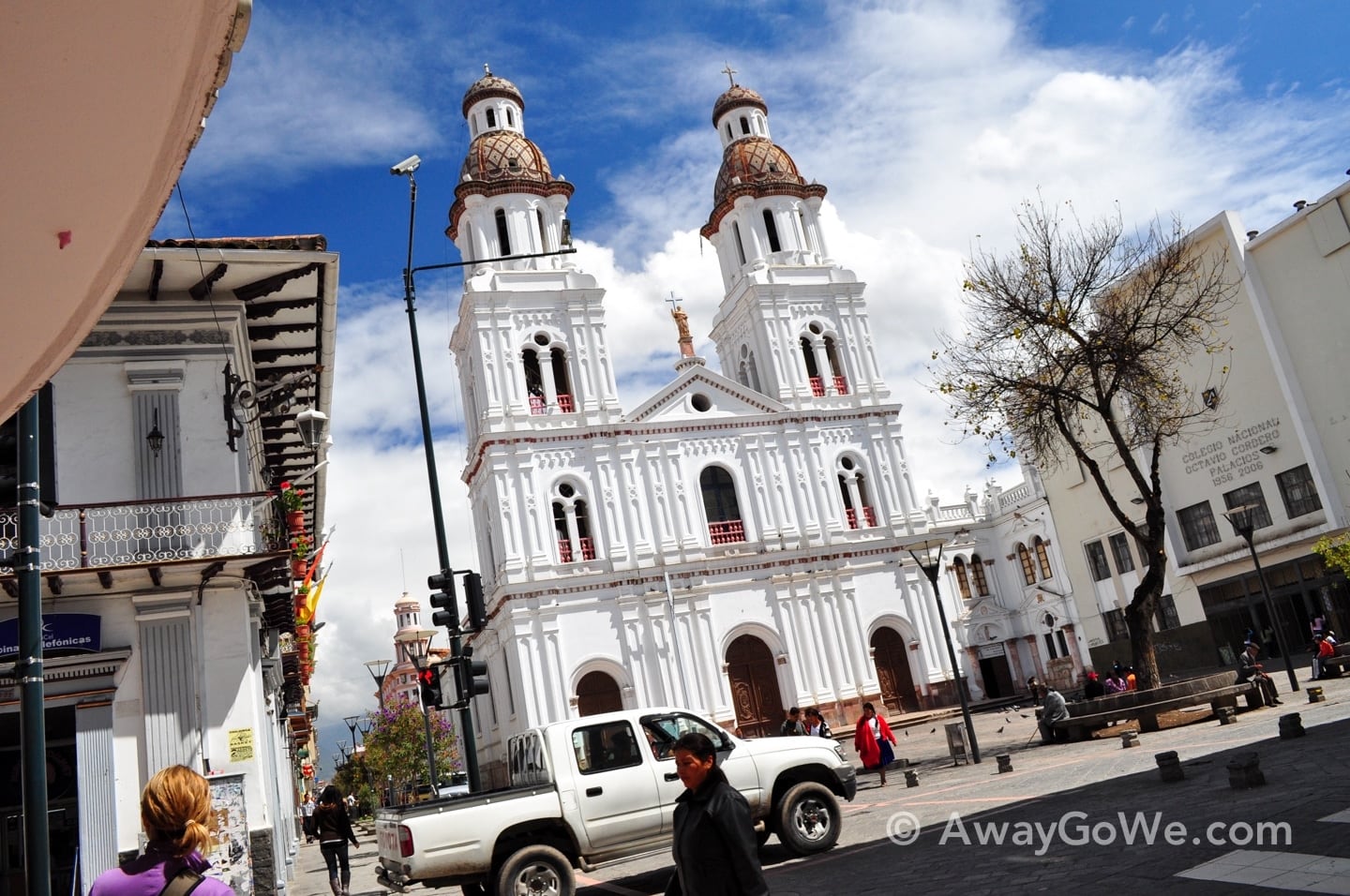 Everything about our stay in Cuenca was perfect…except the first night’s accommodation.

If you’ve had a chance to peruse our interactive Peru-Ecuador trip map earlier in this post, you may have noticed that we stayed in not one, but two different hostels in Cuenca…

We had an idea of two centrally-located hostels we wanted to stay in (a block away from each other), but had not yet made reservations. Since we were arriving a bit late in the afternoon, we hurried over to the hostels to have a look. Hostal El Capitolio was perfect, but the US$8 price tag sent us around the block to the next place. Hostal Escalinata wasn’t exactly the Ritz, but at $5 a night, it had everything we needed. We love a good deal on lodging, but this time, we really should have stuck with the first place.

It’s not uncommon in Latin American cities to be awakened at midnight by the thump of a raging disco down the street, but I never would have imagined that we’d find ourselves sleeping inside a raging disco.

The night started out just fine. After a fun-filled evening strolling around the neighborhood, we turned in around 11pm. All was quiet and sleep came quickly.

And then, all hell broke loose.

Now, imagine for a moment that, for some strange reason, you’ve set up a bed in the middle of a popular club dance floor and are sleeping soundly when all of a sudden the DJ powers on the sound system, cranks the volume to “11” and lets loose the Hounds of Hell!

But we’re in a private hostel room, not a club, you say! WRONG.

After our rude and heart-attack-inducing awakening (but after the paralyzing shock subsides enough for me to gather my thoughts) I begin to investigate, and what do I notice? A six inch gap between the top of the wall my head is up against and the ceiling.

Even worse, in addition to the deafening noise, flashing light covering the entire spectrum is spilling through the gap into our room.

I hoist myself up to peer through the gap and couldn’t believe what I was looking at? An entire disco happening literally on the other side of our paper-thin partial wall. And the music continued into the night and didn’t end until sunrise.

Earplugs, useless. Other vacant rooms, nonexistent. Just thumping and flashing and blaring, for hours, and hours.

In hindsight, we should have just gone over there and joined in, but we were just too exhausted and shocked for that. So, we soldiered through it. But the minute that sun came up we were packed and out of there.

We made the short walk around the corner (in our zombie state) back to Hostal El Capitolio, shelled out $8 and were positively thrilled to do so. Capitolio ended up being an exquisitely restful stay and quite possibly the best $8 I’ve ever spent on lodging, or anything else, for that matter. 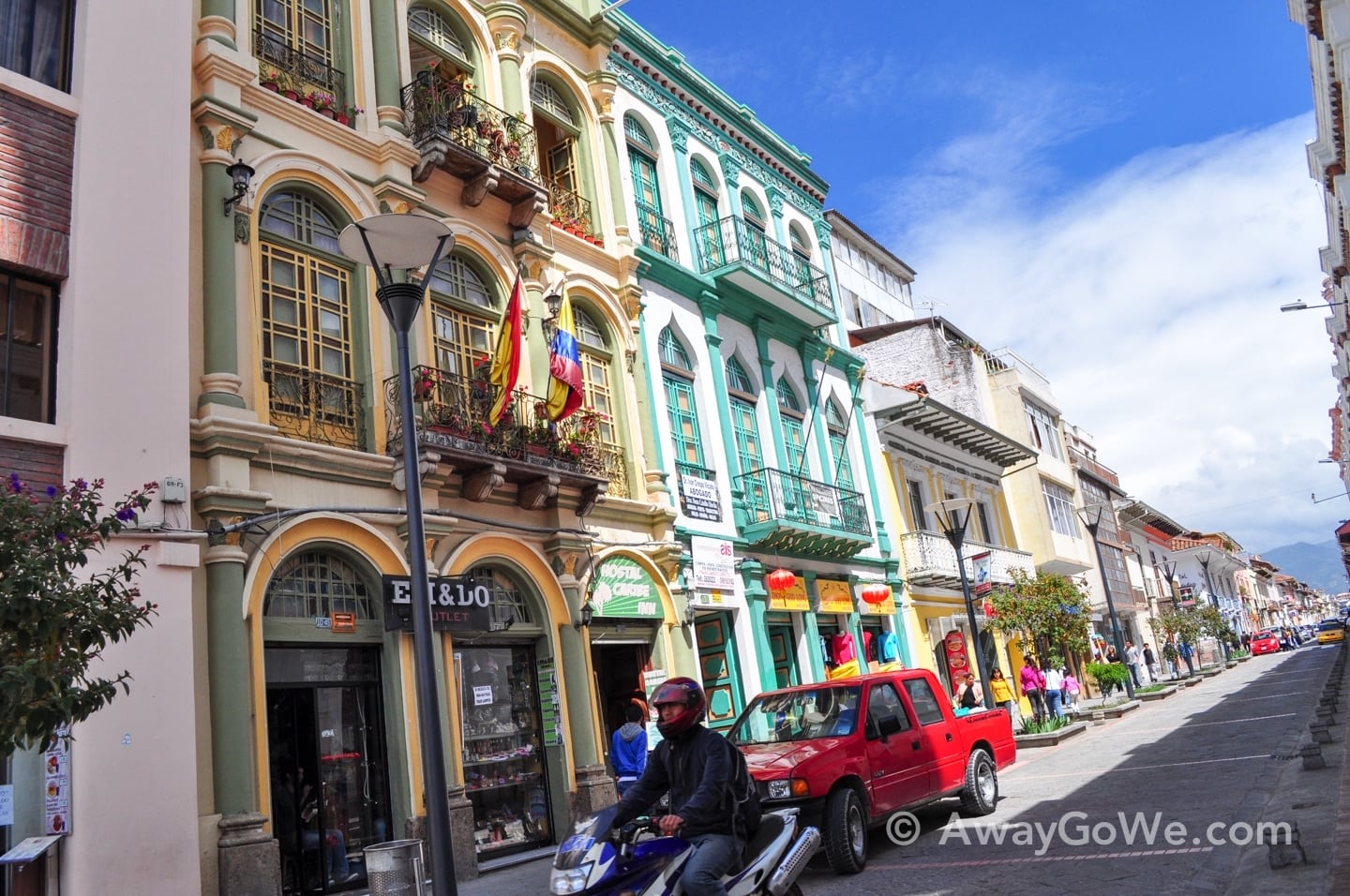 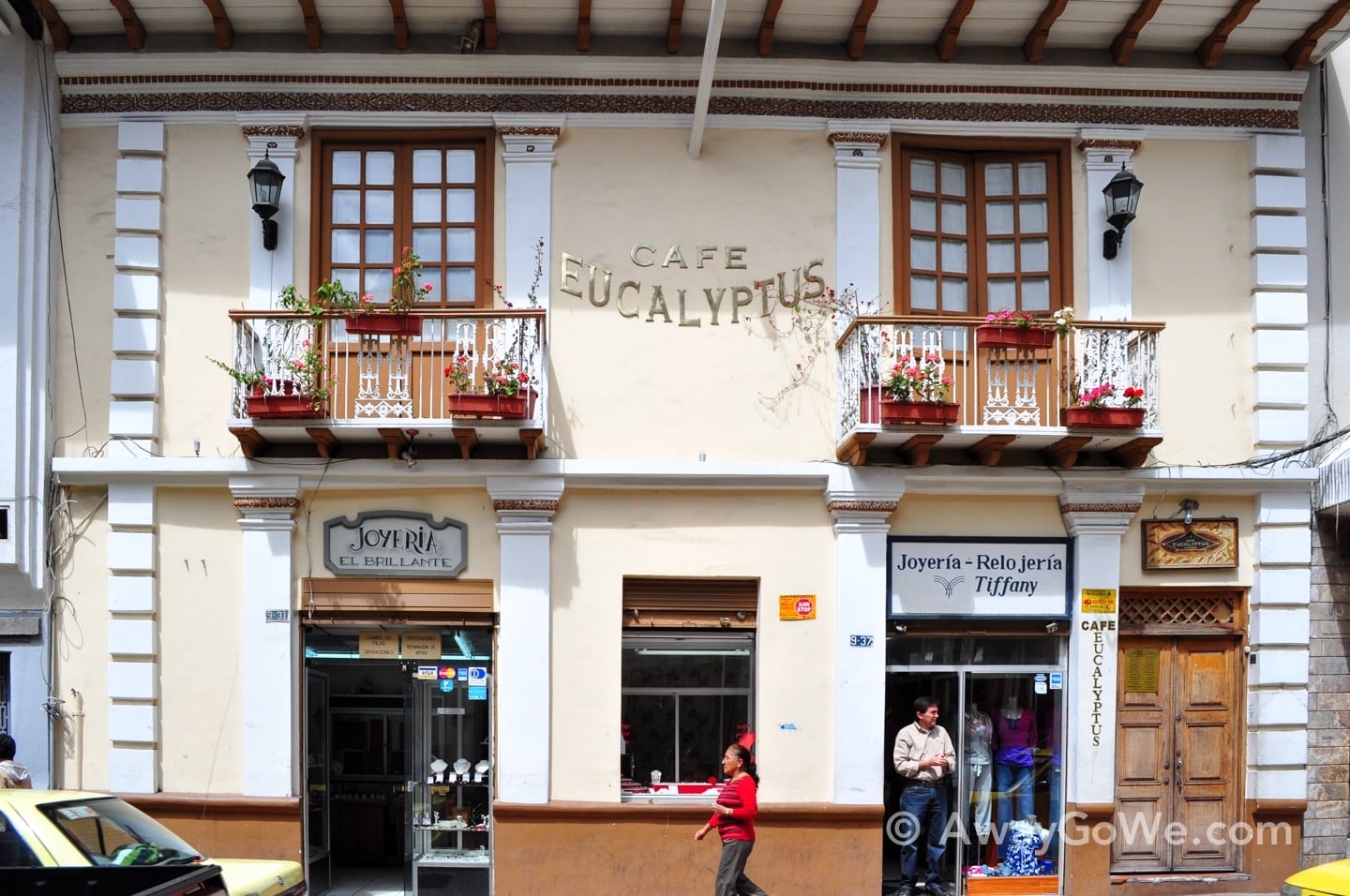 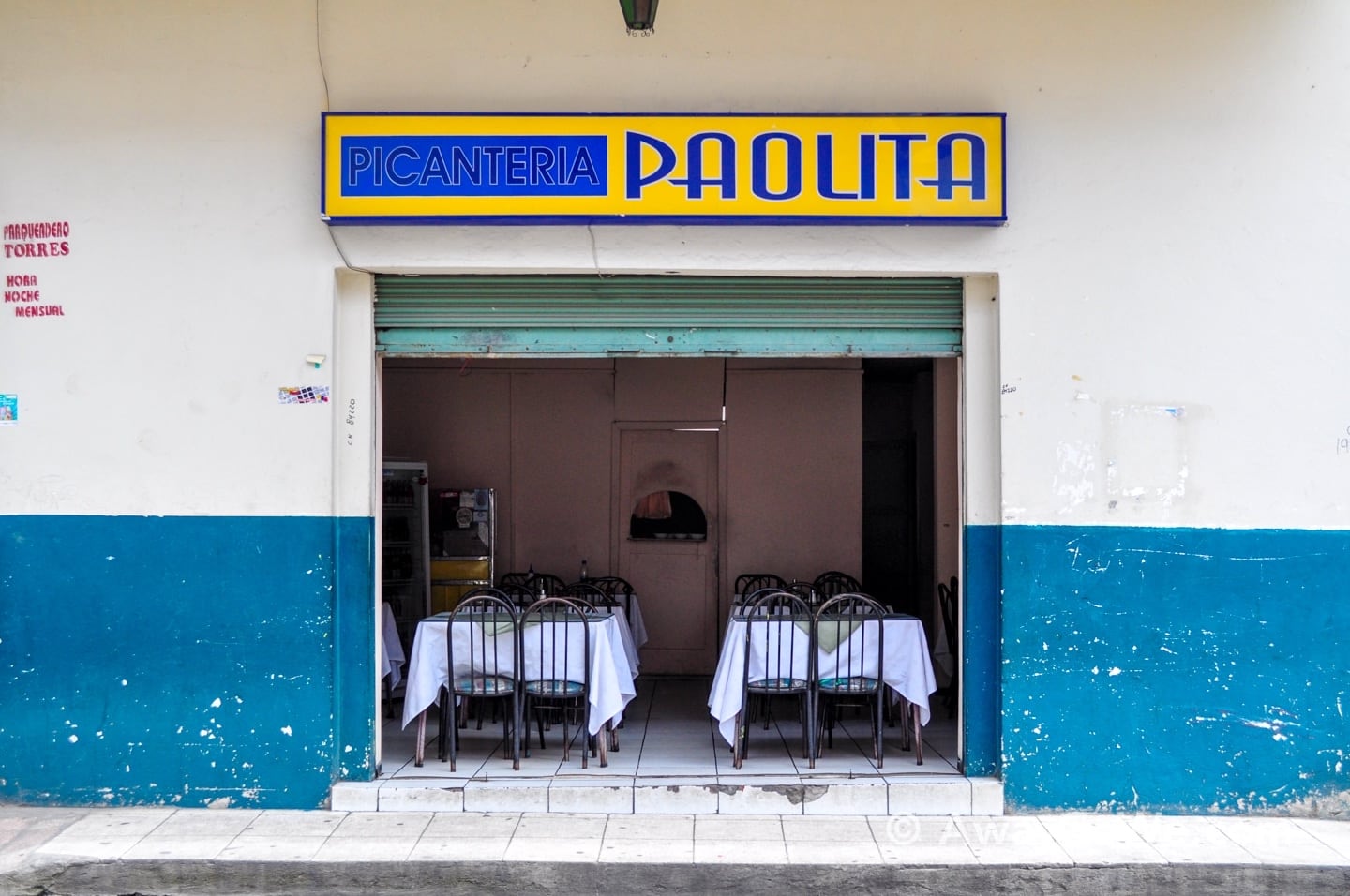 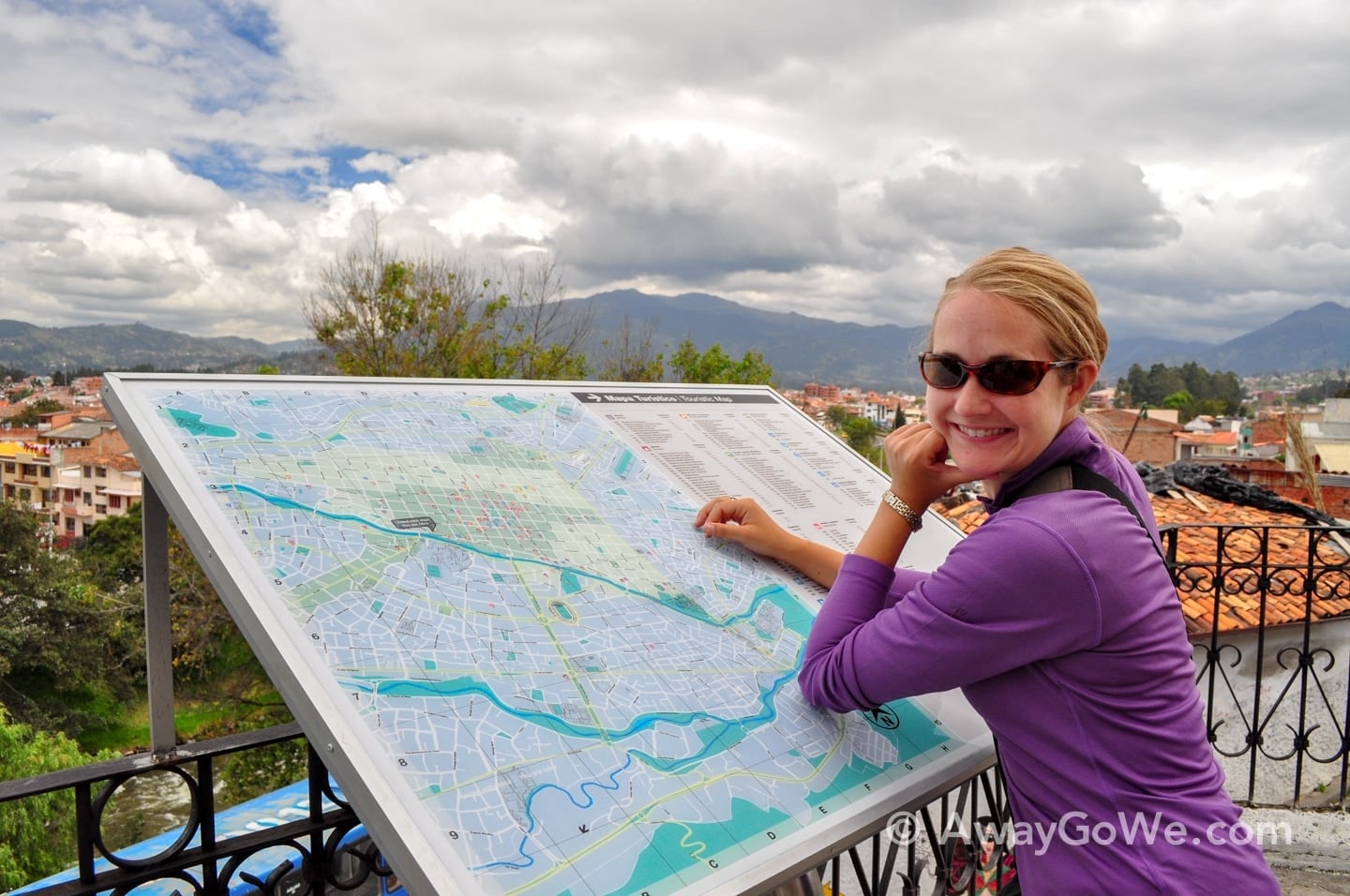 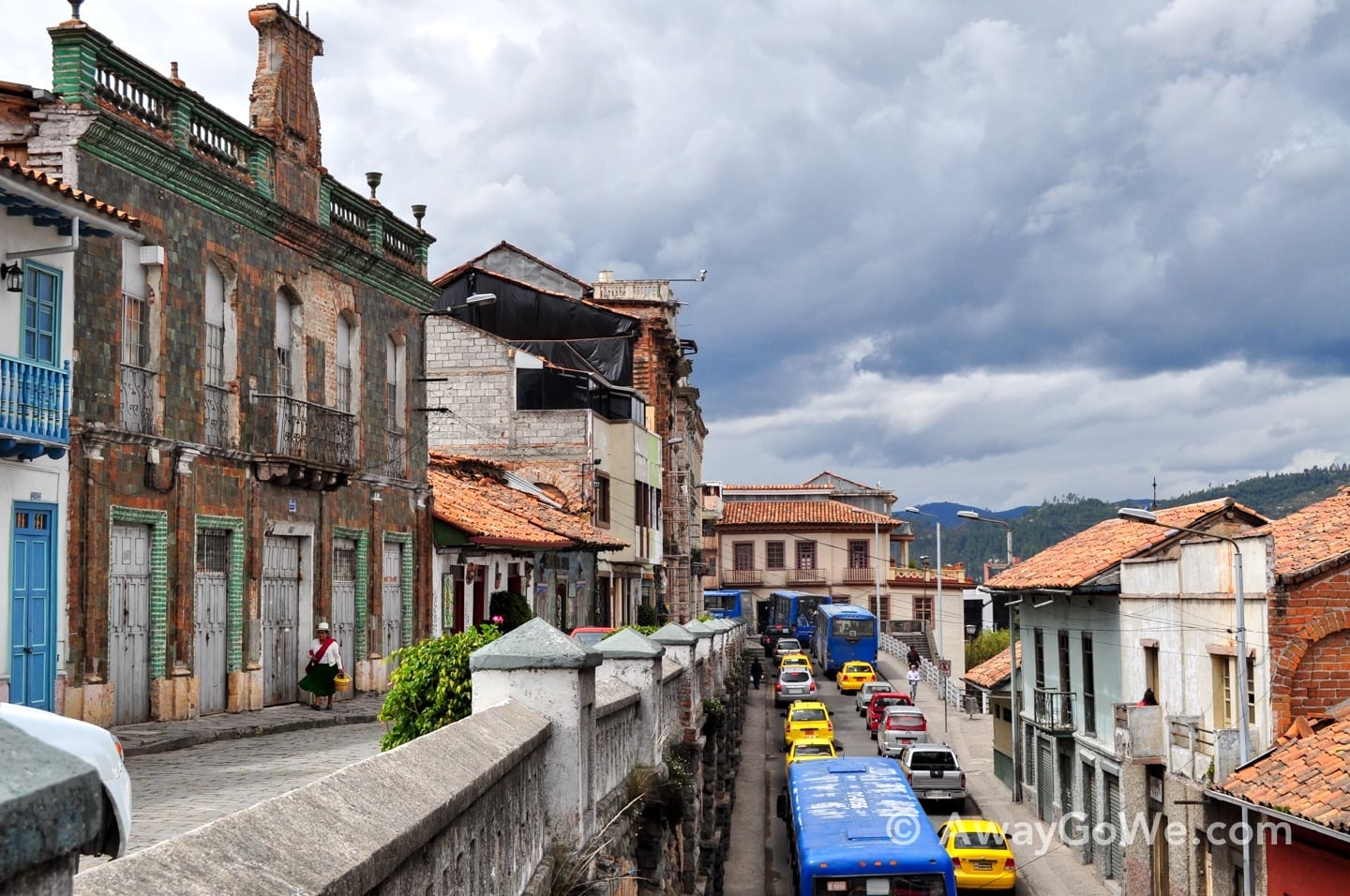 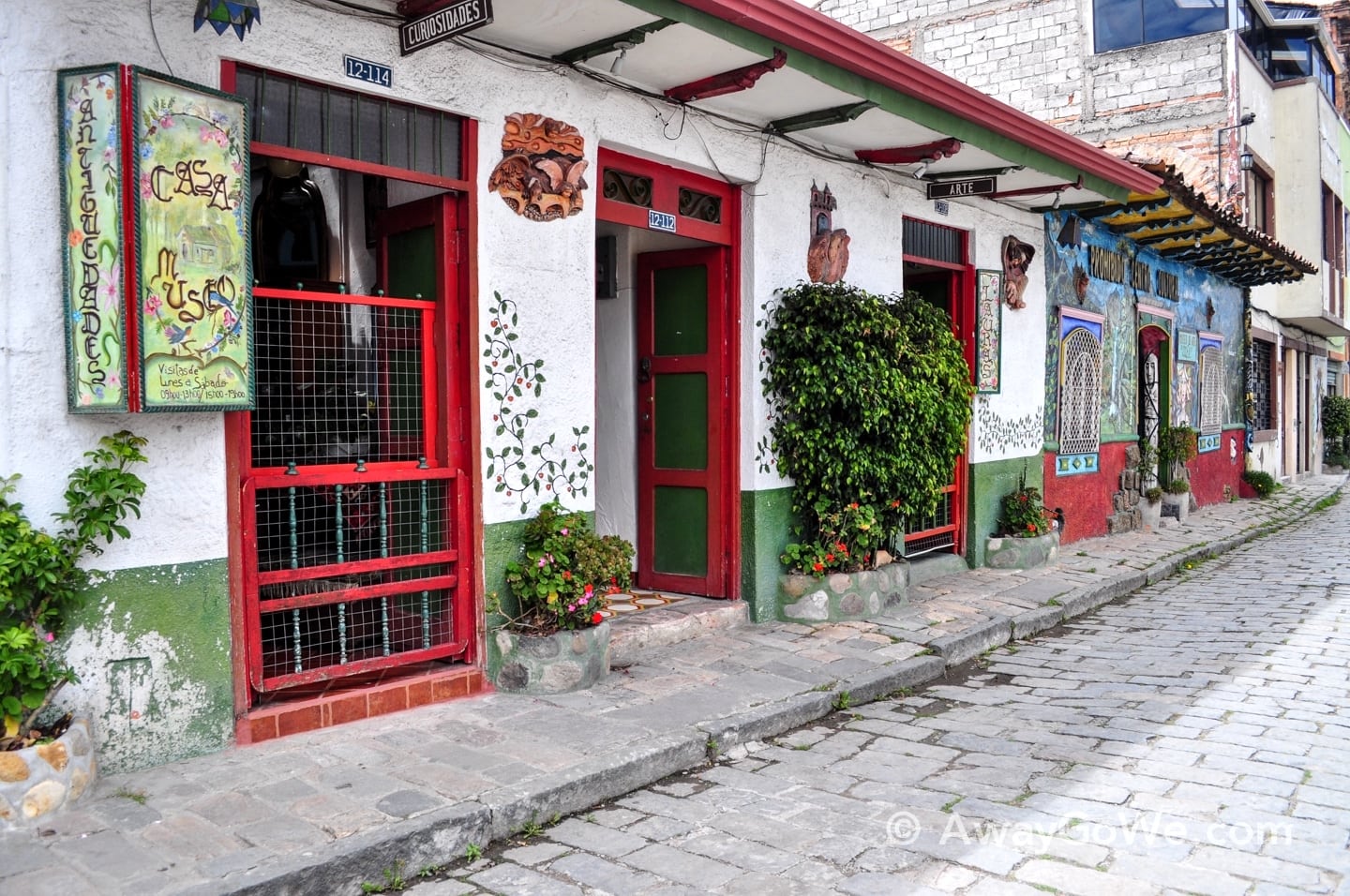 Just down the Staircase (Escalinata) from our hostel, past the awesome Austrian-owned Wunderbar Cafe, is Cuenca’s picturesque riverwalk along the Rio Tomebamba. 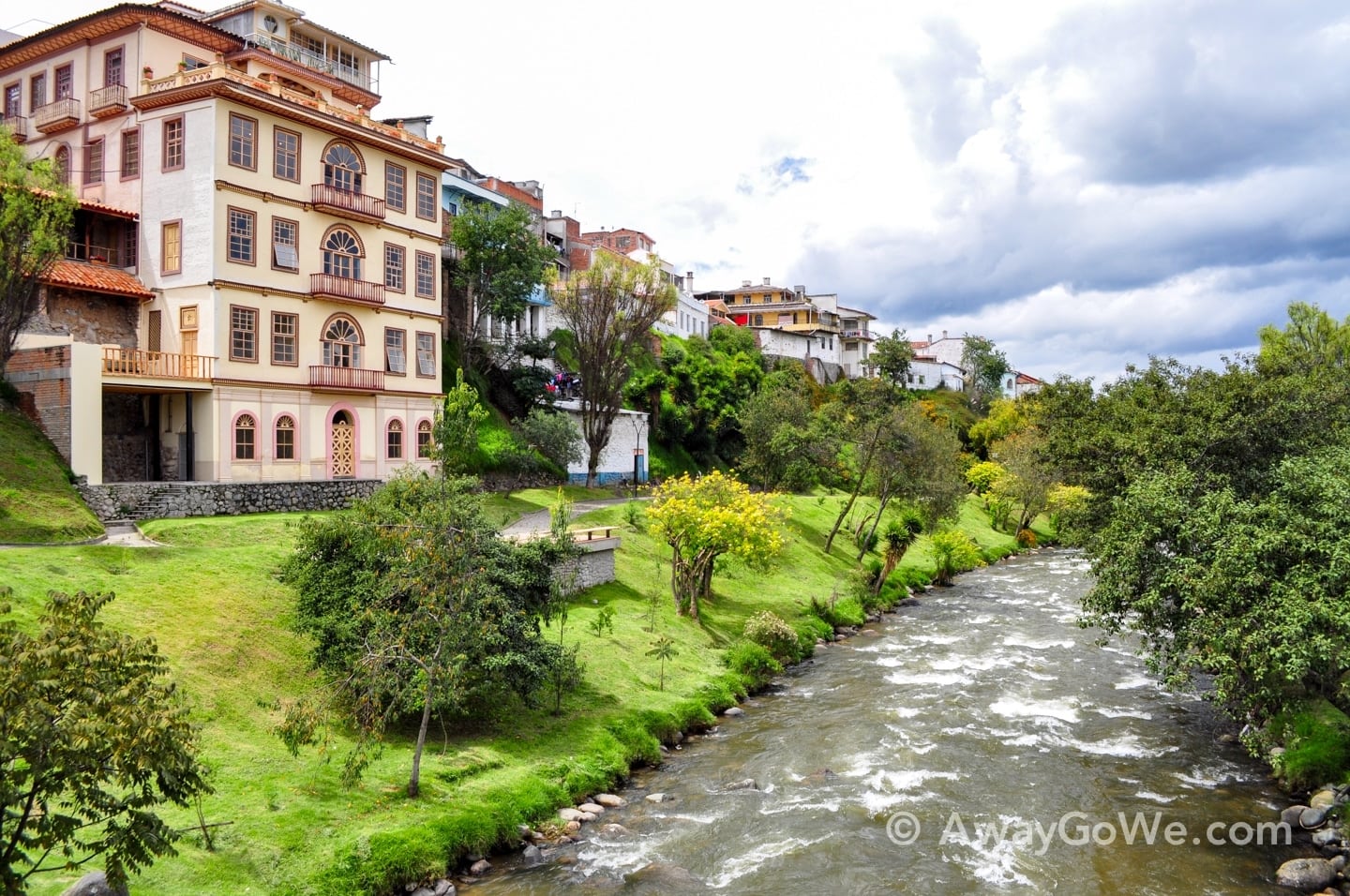 A little farther down the river is the excellent Museo Pumapungo with its museum, gardens, bird sanctuary and Incan ruins! 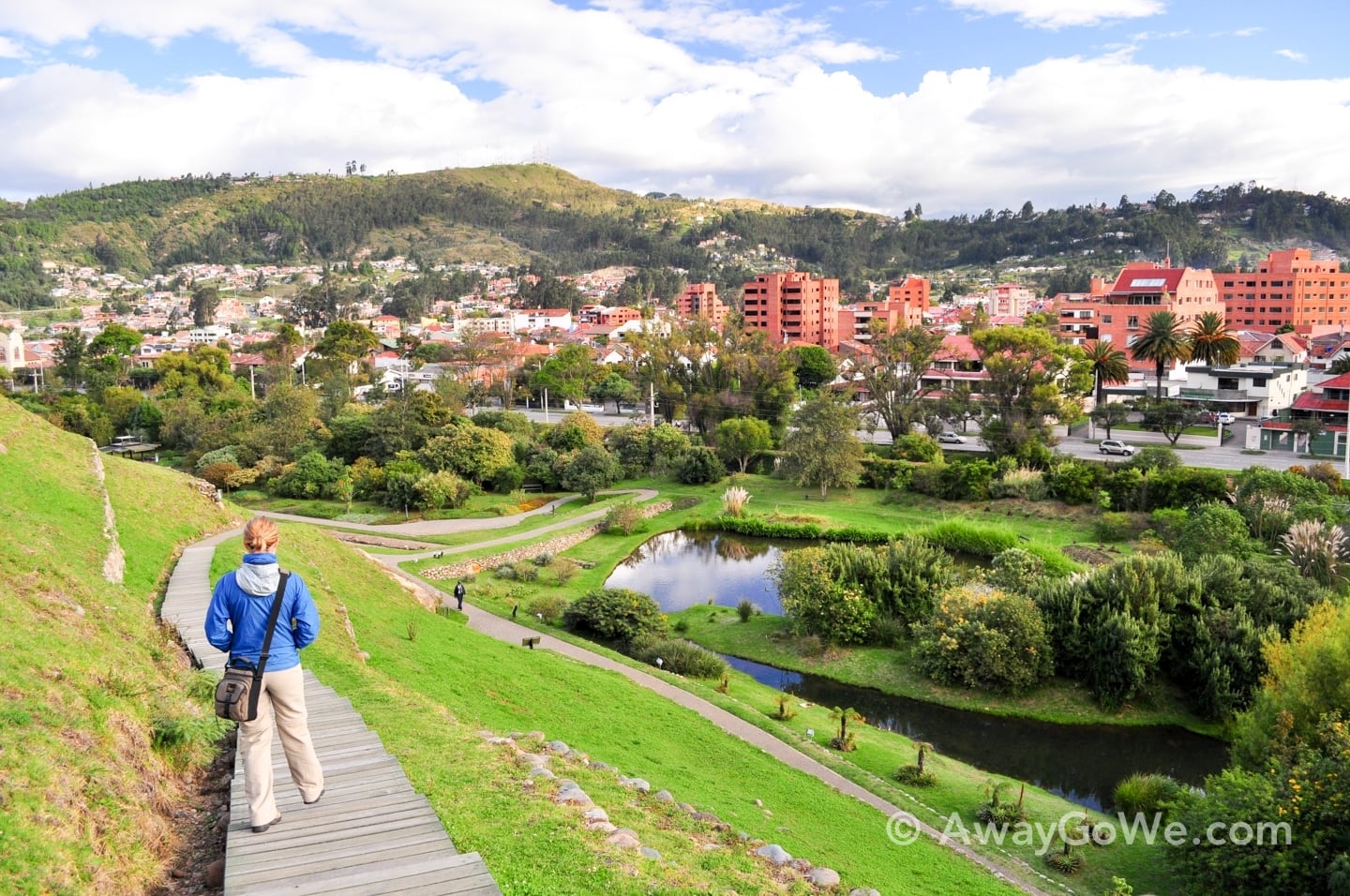 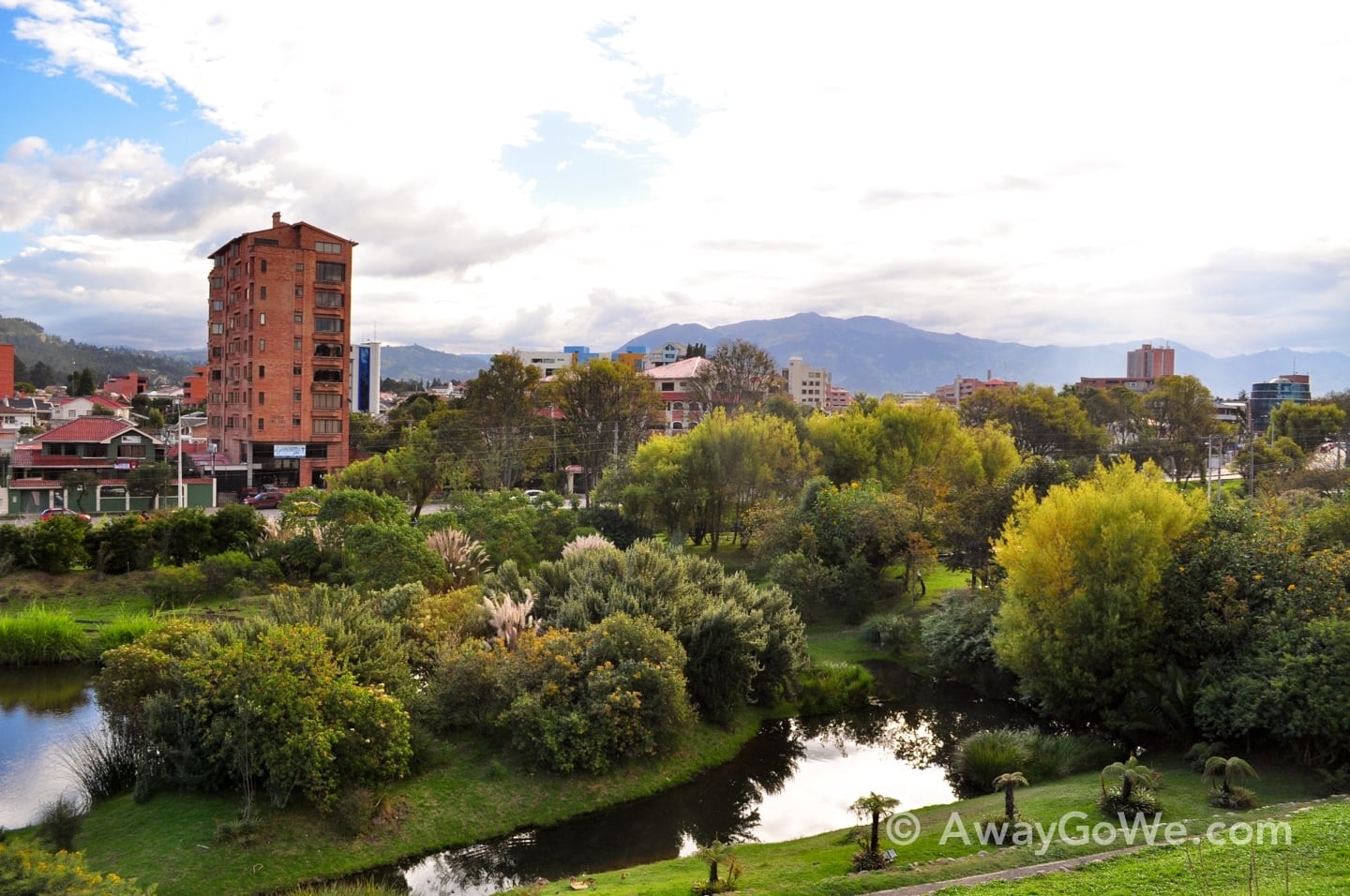 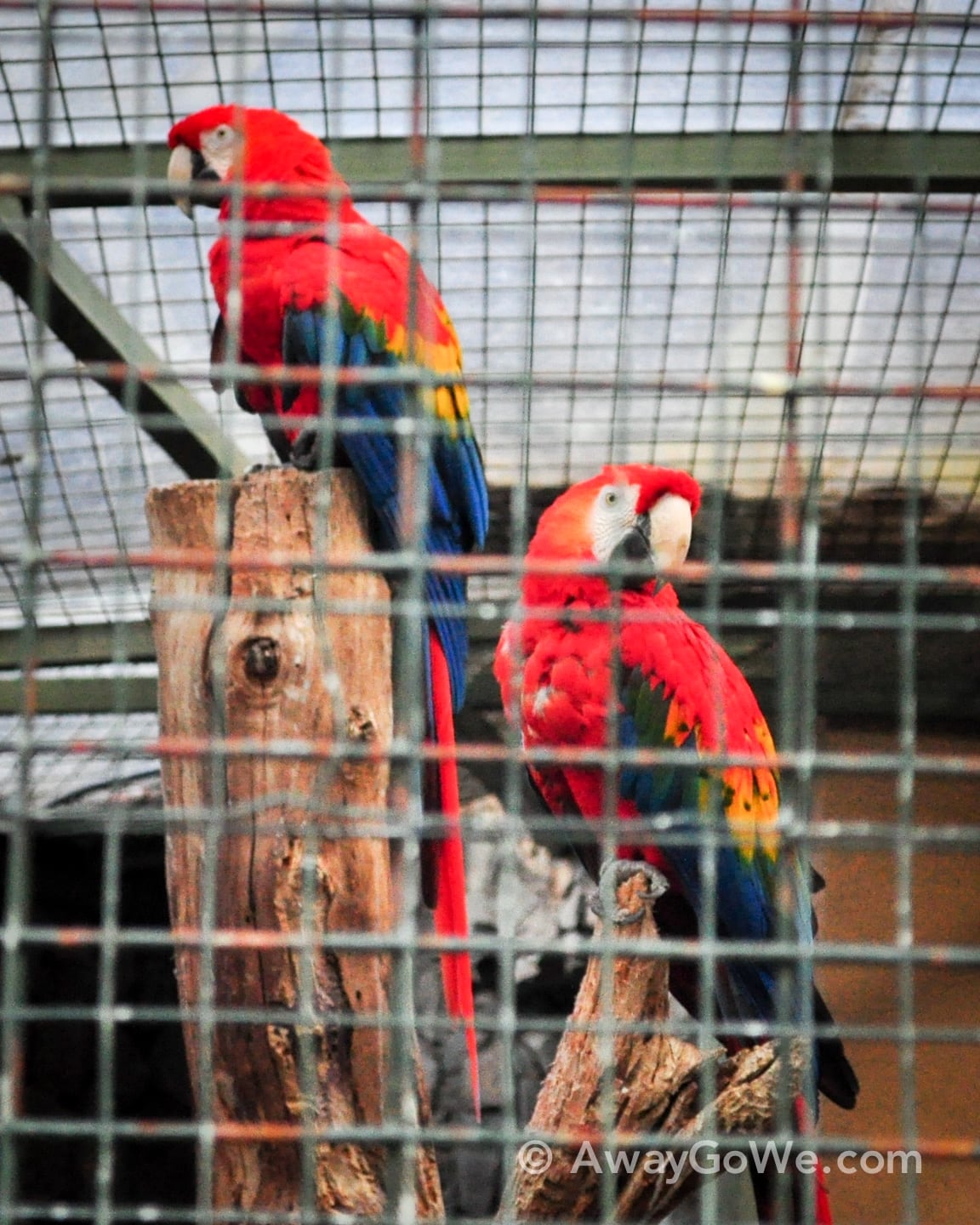 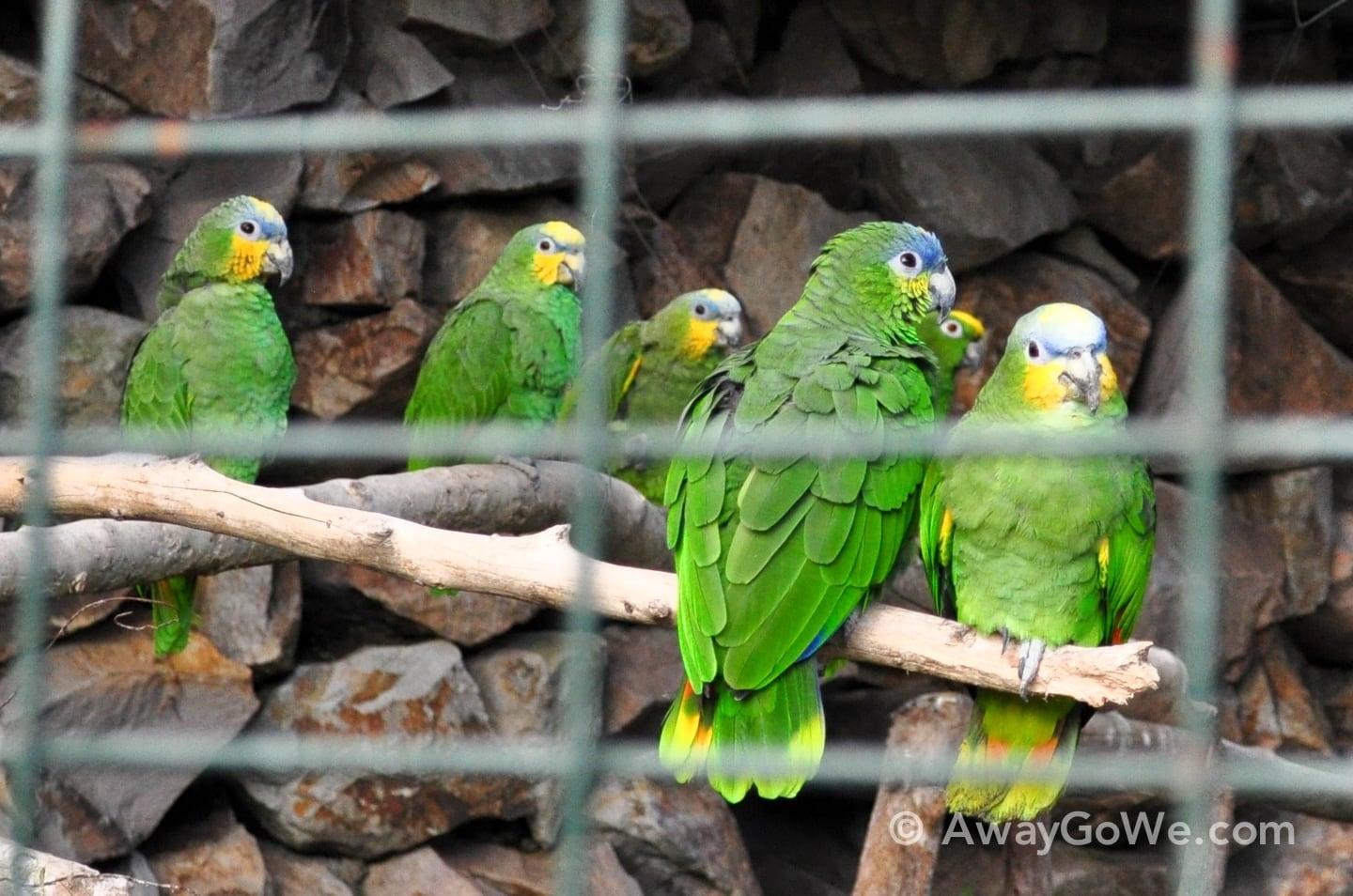 To cap off another lovely day in Cuenca, we took a cross-town bus up to the Mirador de Turi. The public bus system is straightforward and fairly comprehensive and cost significantly less than the US$8 for a roundtrip from the city center in a taxi. It’s recommended to visit Turi at sunset for breathtaking views of Cuenca’s famed skyline, and we are happy to report that the views did not disappoint. 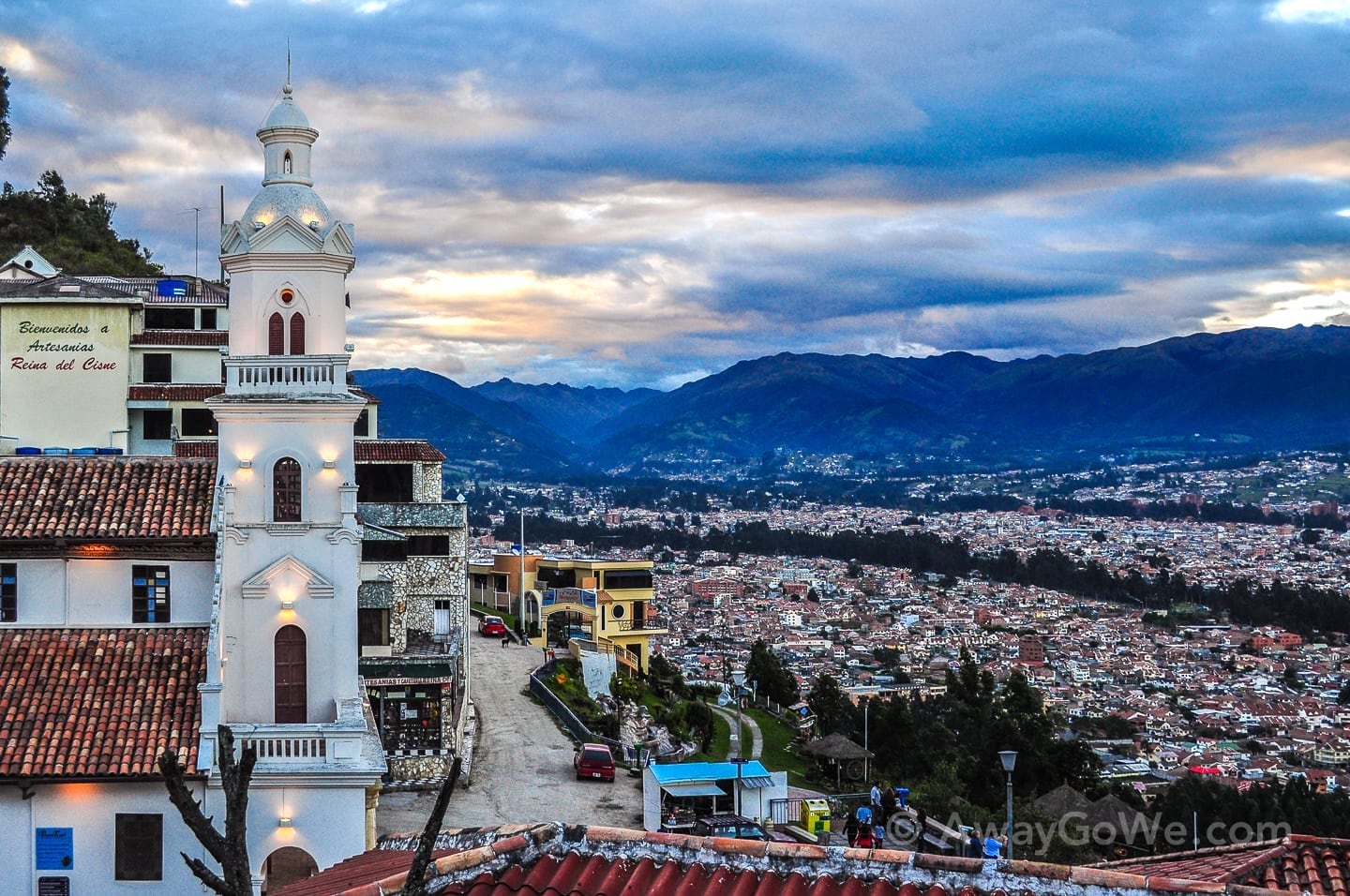 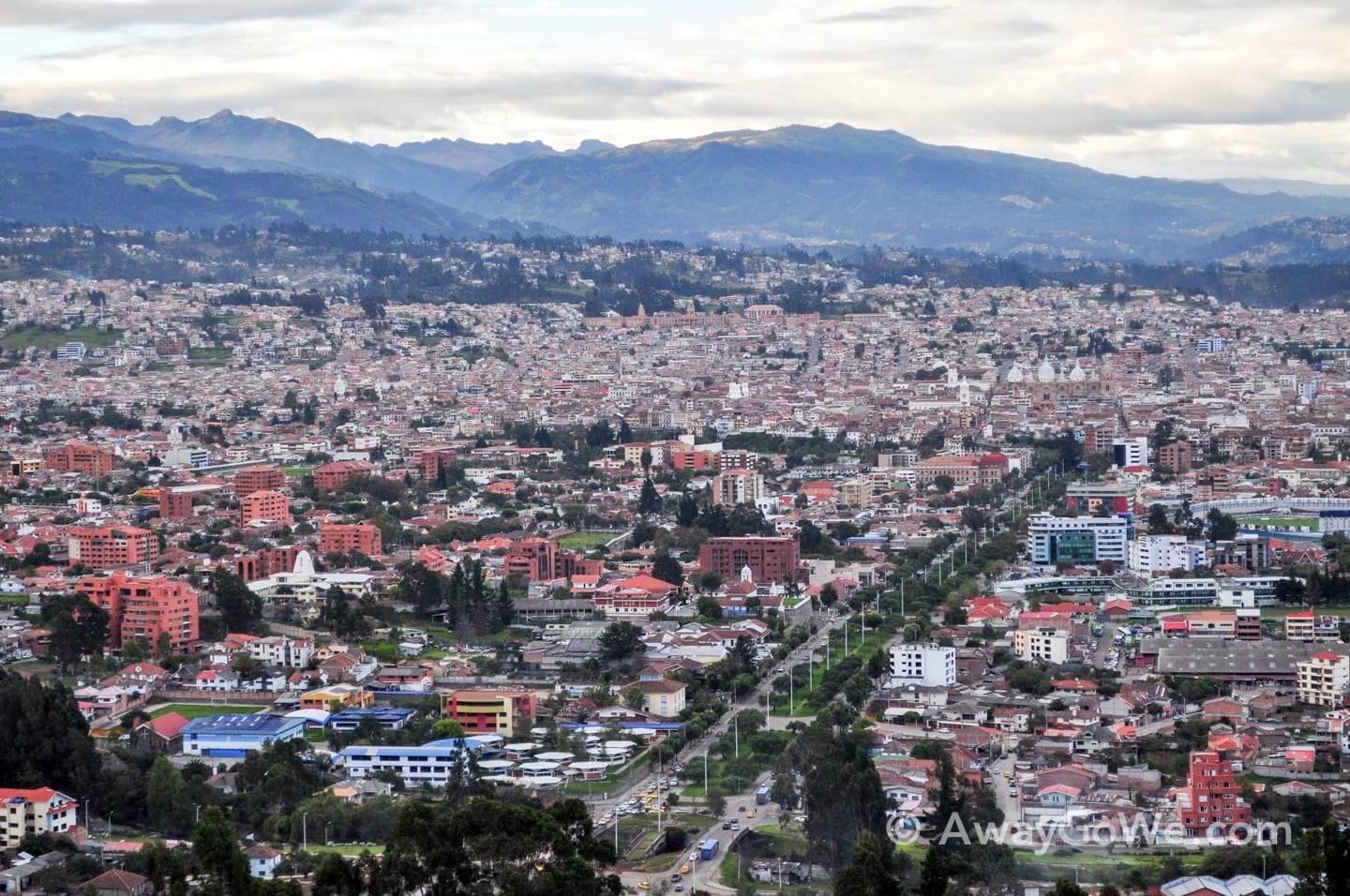 On our return bus trip, we were riding through an intersection and noticed this: A full-on fire dancer performing for a captive audience between green lights. Just another evening in Cuenca…! 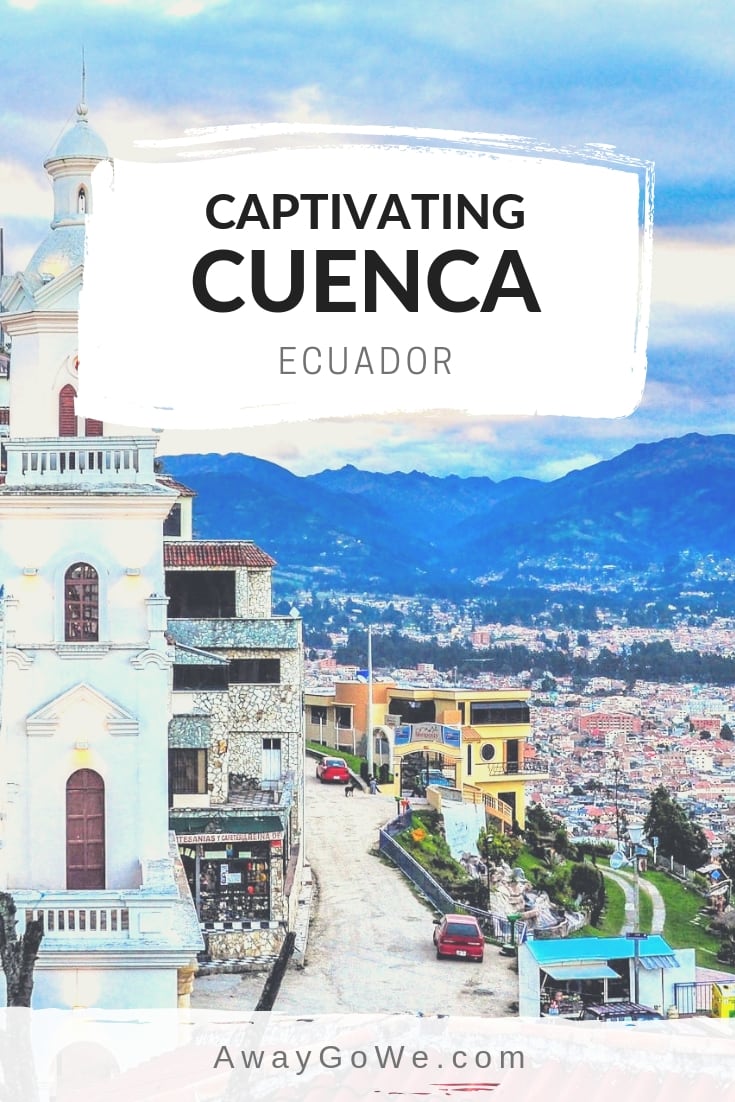