We take a couple of bicycles on a leisurely ride around the mysterious island of Don Khon — one of the Mekong’s “4,000 Islands.”

Following up on our Don Det post, we present here the fabulous neighboring island of Don Khon, also located in the far south of Laos.

Now, before we go any further, a quick shout out to all of my Lao readers out there and a brief language note — I do realize that I’m being redundant in my use of “Island of Don…” as ‘don’ is Lao for ‘island.’ I just really want to emphasize to our non-Lao readers out there (I think there are at least three…Hi Grandma!) that these are indeed islands we’re speaking of…4,000 islands in fact. Unfortunately, Lori and I have a return ticket out of Shanghai in December and thus are unable to visit 3,998 of the islands, but we certainly would not be against coming back and trying again. 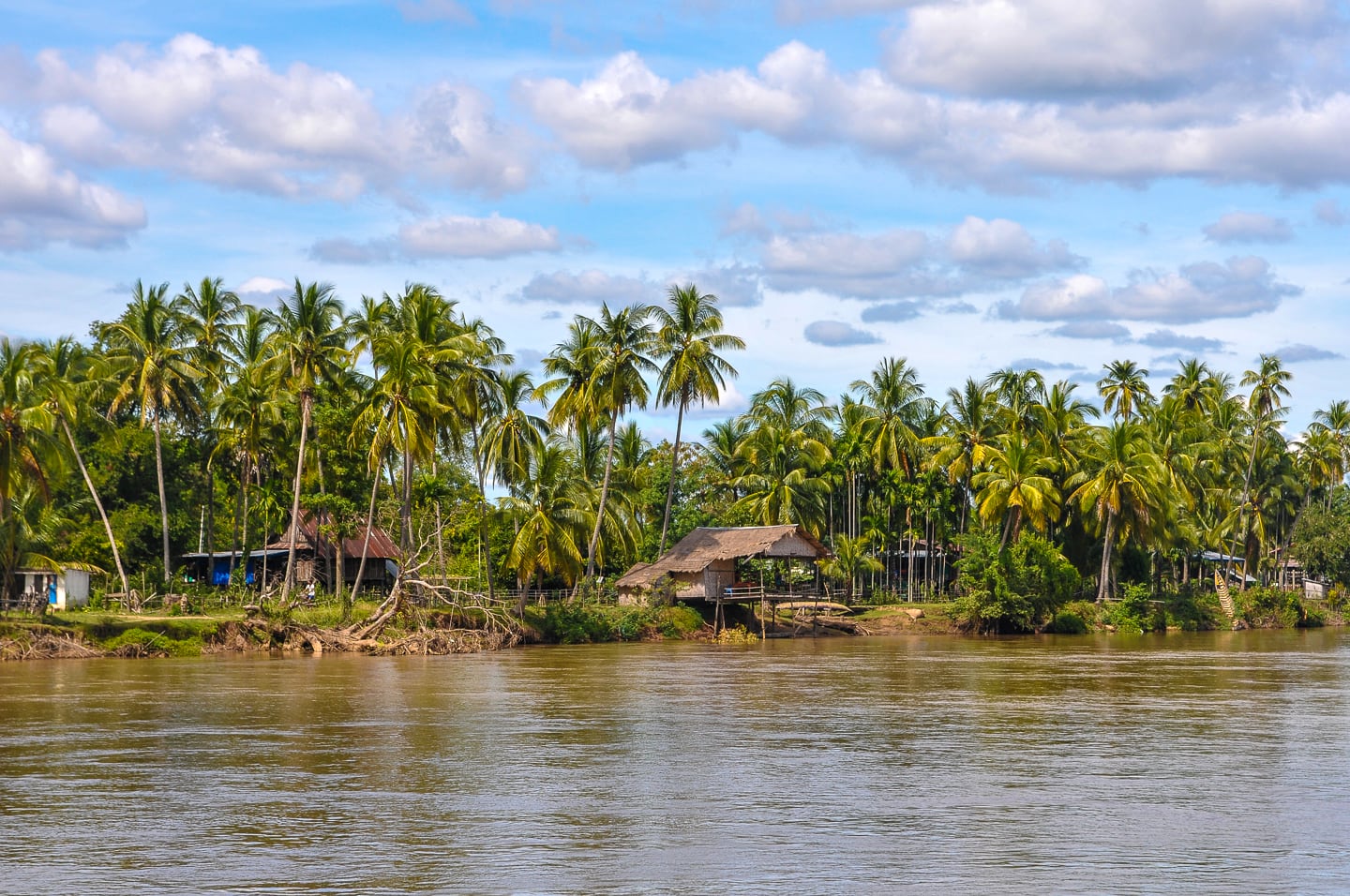 For most of our time in Si Phan Don, we stayed at a wonderful family-run establishment called Santiphab guesthouse on the southeastern shore of Don Det. From our bungalow, we could see the banks of Don Khon and were eager to get over there at some point. The kicker was that the island has an entrance fee of about 25,000 Kip per person (about US$3.00). Being on quite a tight budget, we weren’t able to justify to ourselves spending the fee more than once during our time in Si Phan Don. That’s not to say that we didn’t cross the old railway bridge to enjoy Don Khon’s restaurants after the ticket office had closed for the day around sunset. However, we did dedicate one entire day to seeing the island (which definitely warrants at least a day).

Early on the morning of 2 November, we crossed the bridge from Don Det into Don Khon, payed the fee, grabbed a tasty French breakfast at Fleur du Mekong and set off to rent some bicycles.

The bicycle rental process was very illustrative of what I love about Laos. The exchange went something like this:

D/L:  We would like to rent two of your bikes please.

(and indeed, they were quite nice cruiser bikes)

(Lori hands over money and tries to hop up on the bike. Bike girl runs off and comes back with a wrench, quickly adjusts the seat with a big smile and waves us off)

I guarantee, in most other countries we traveled through in Asia this exact scenario would have been unheard of. In fact, we found 99% of the folks on Don Det and Don Khon to be incredibly friendly, helpful and gracious. $1.20 for a day-long bike rental and no deposit necessary — you be hard pressed to beat that anywhere. 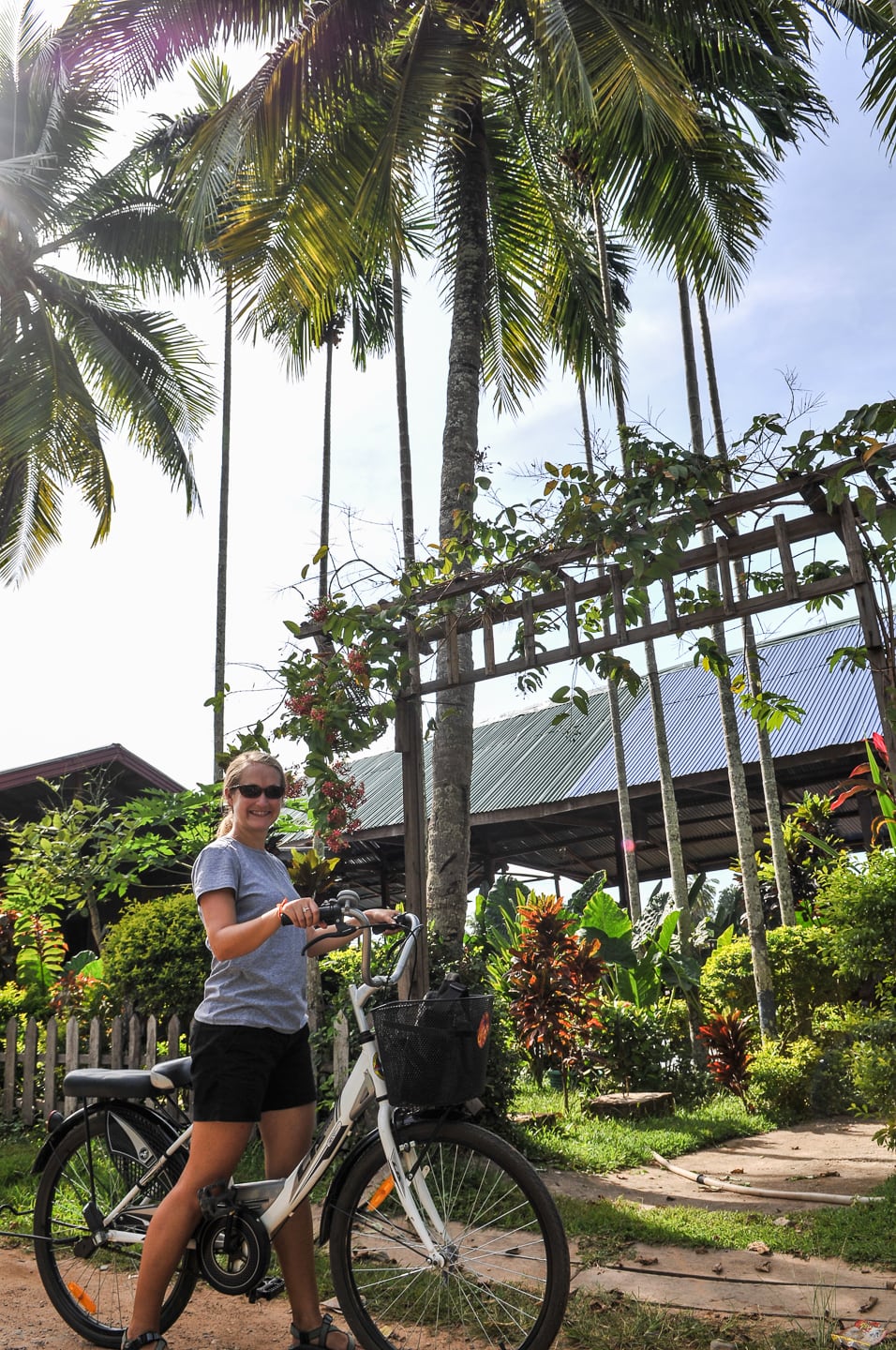 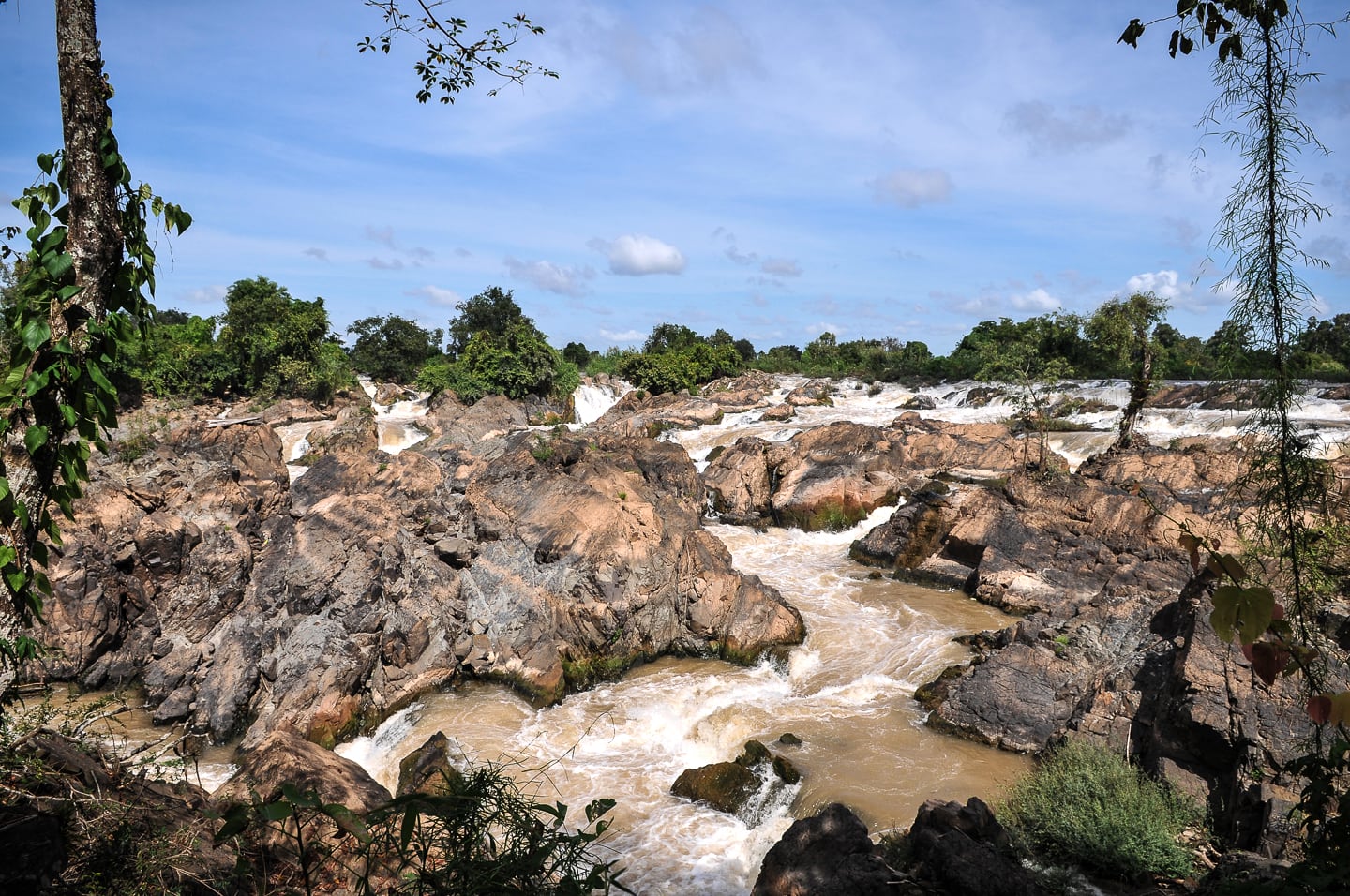 Our first stop was Li Phi Falls, an impressive complex of waterfalls spread out over a wide area of granite, reminiscent of Big Falls just outside of Washington, DC. 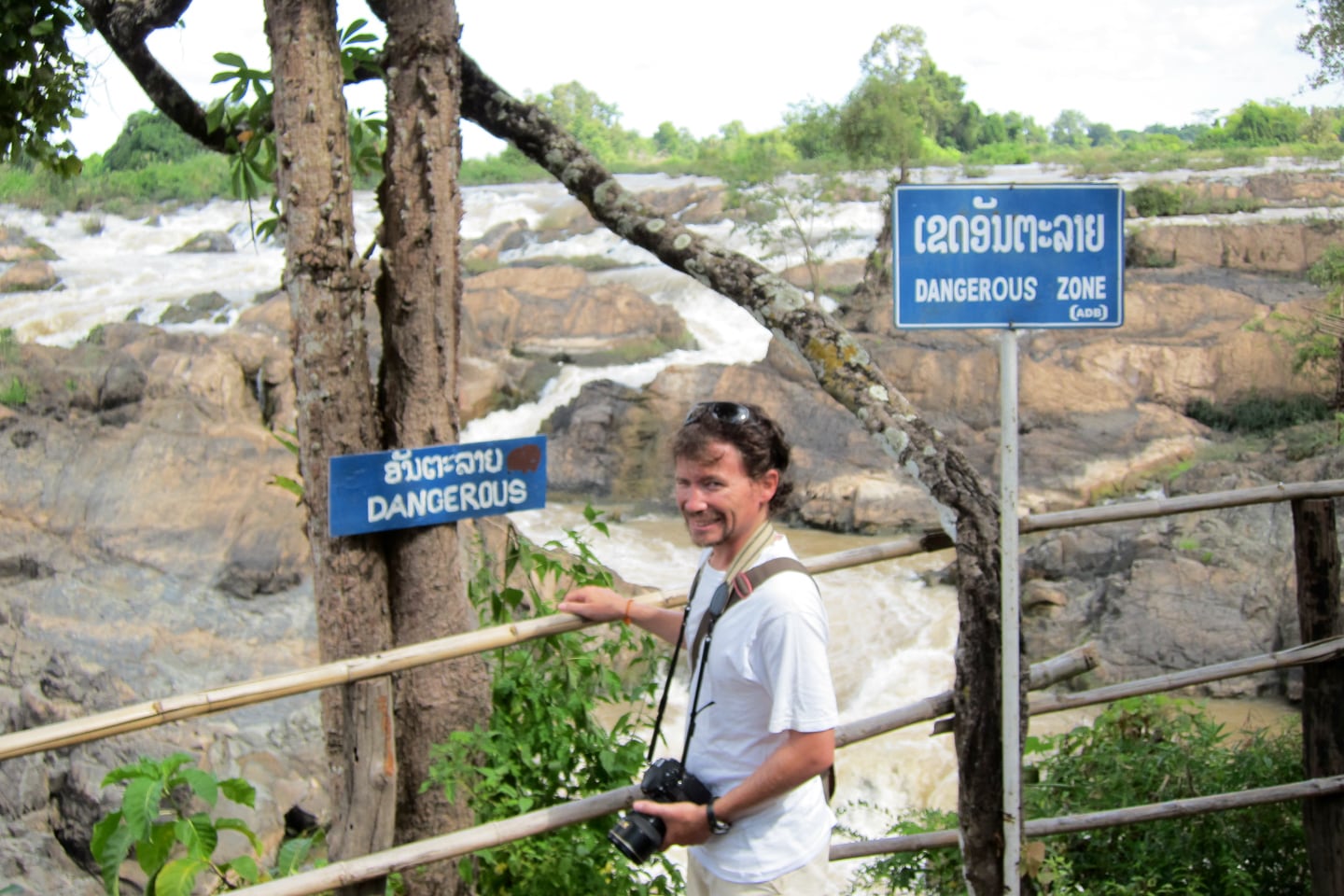 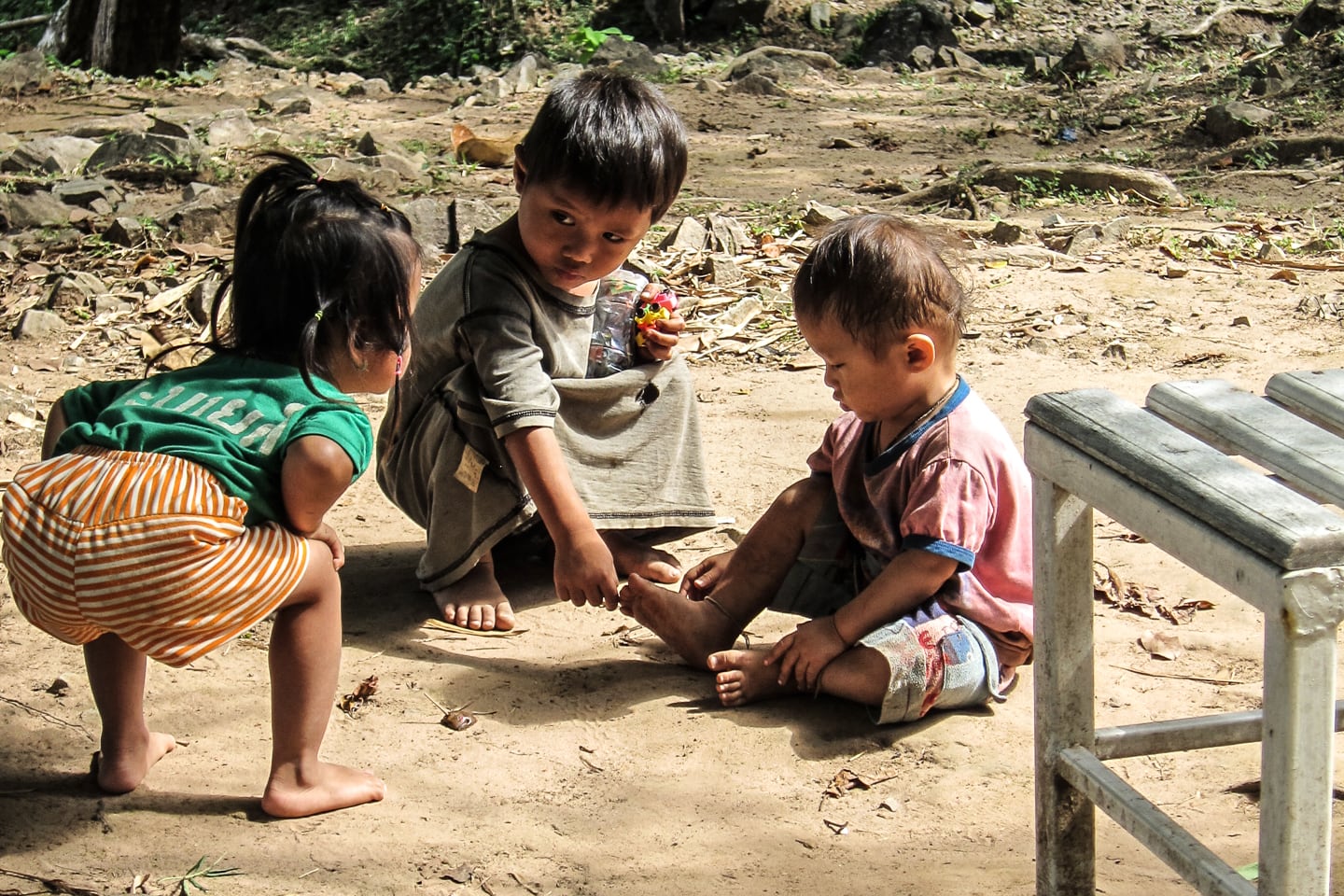 In the interest of full disclosure, Lori actually took this photograph (though my watermark is on the photo above). I love this photo, especially the look on the center boy’s face when he sees his sister encroaching on their game, as if to say: Get lost, sis. Can’t you see I’m busy cheating little Saravan out of all of his marbles. 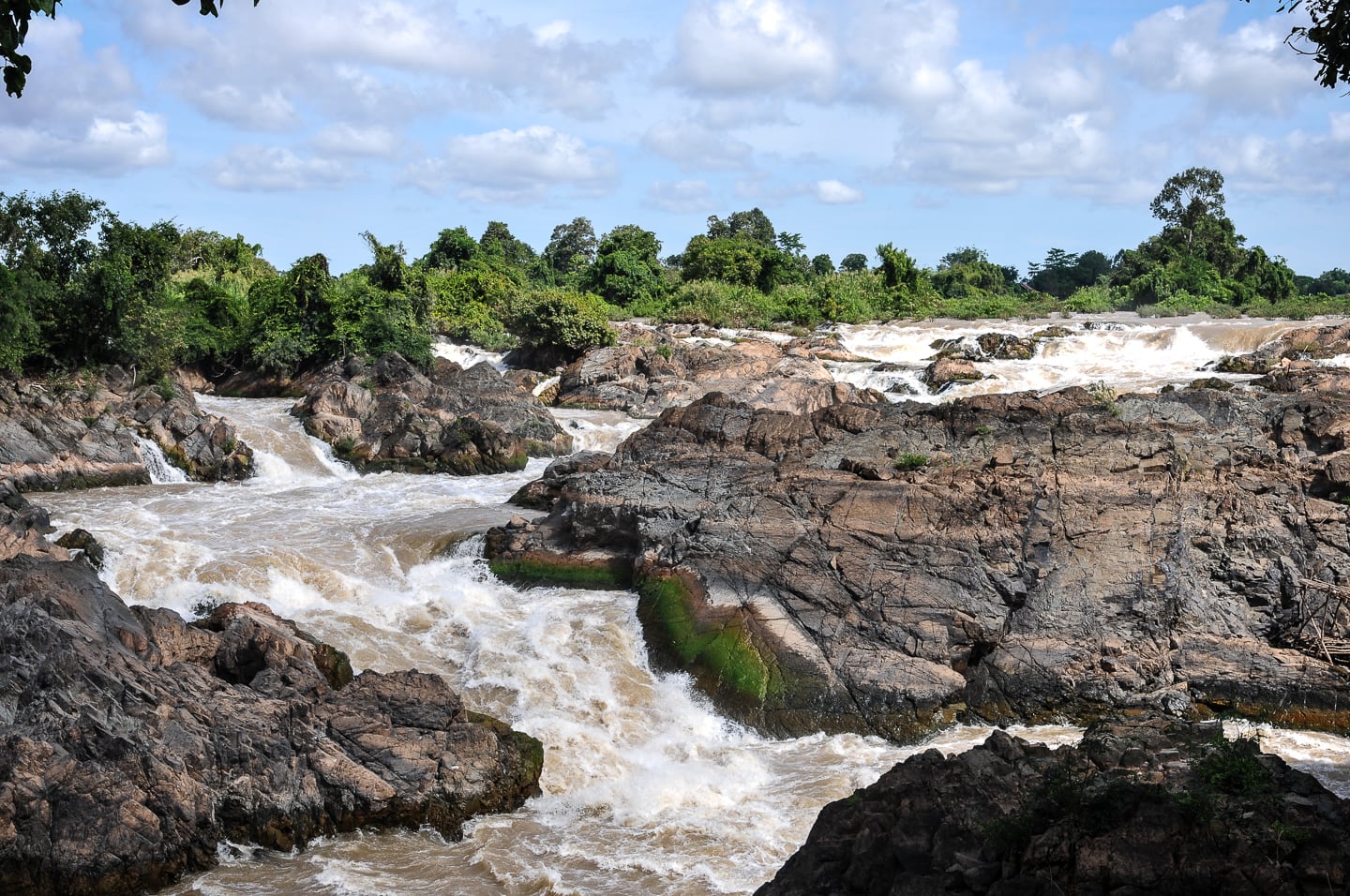 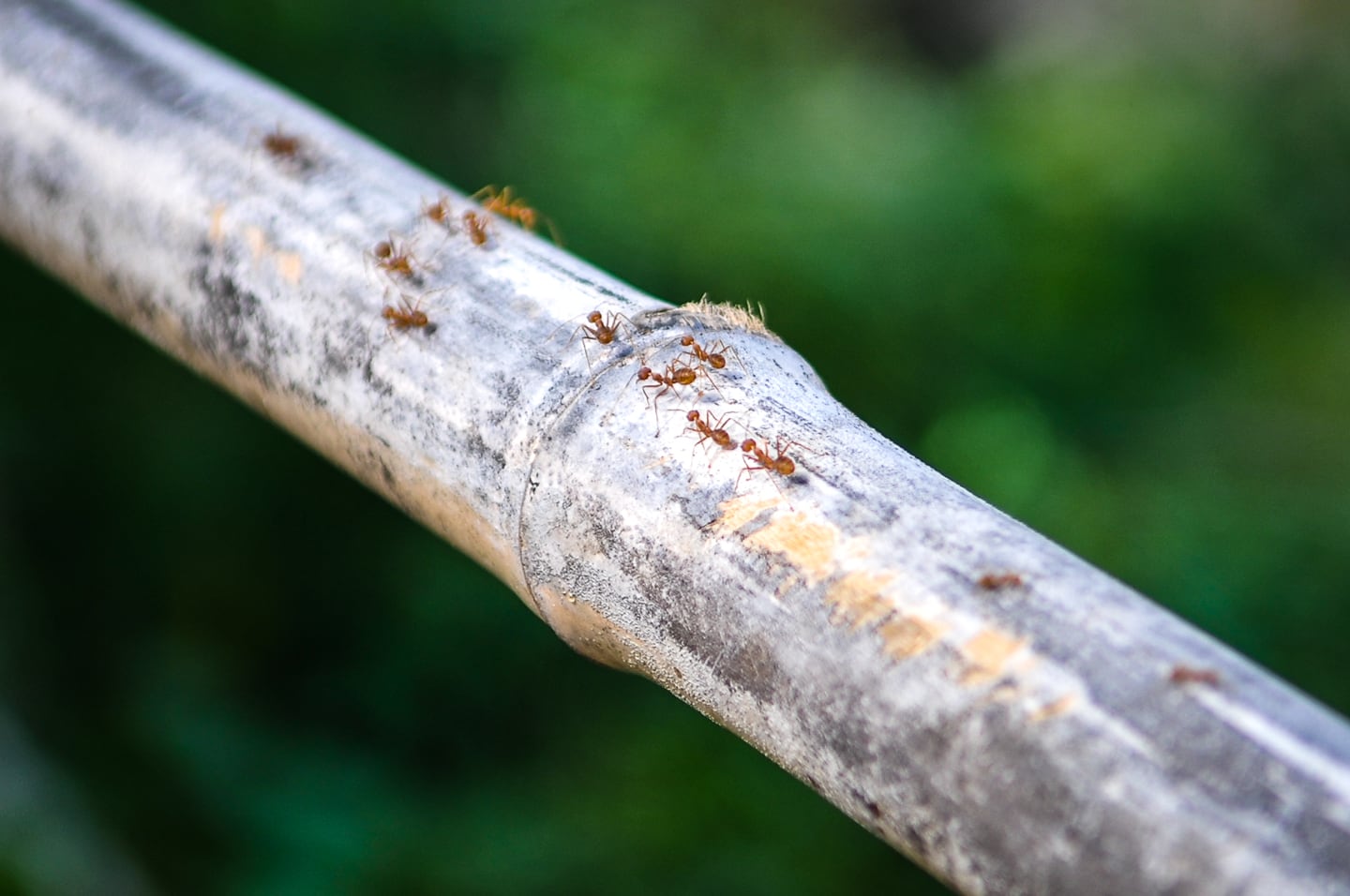 Fire ants running up and down the handrail meant to keep tourists from falling over a precipitous cliff, underscoring the fact that you really shouldn’t be leaning on the this particular handrail. 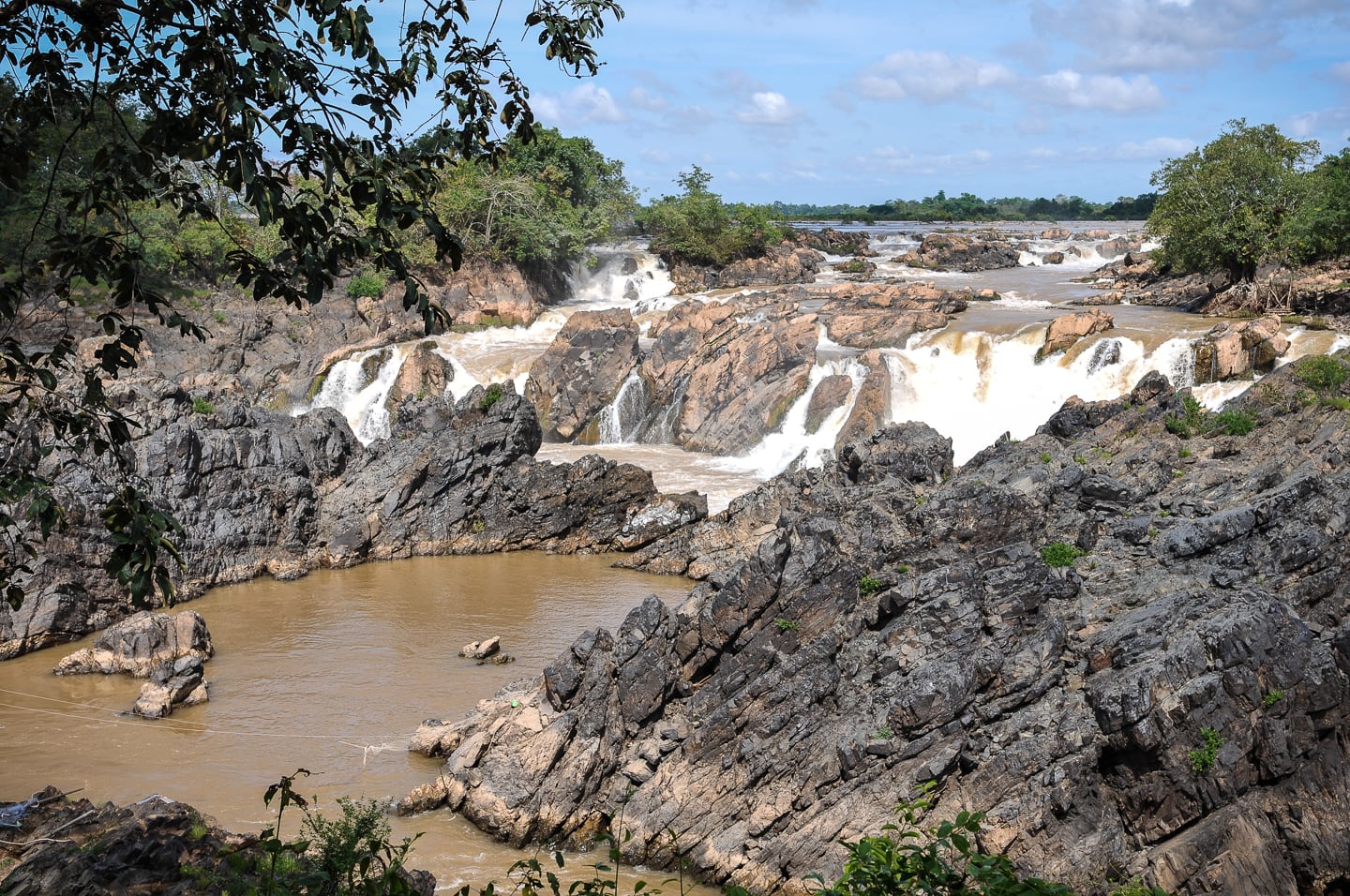 Despite the story these photos seem to tell, Li Phi Falls are kind of a big deal in Laos. We just happened to hit them early and in off season. Apparently, they can get pretty packed with visitors (both locals and foreigners). On this particular day, however, it was just us, the coconut lady and her three children. 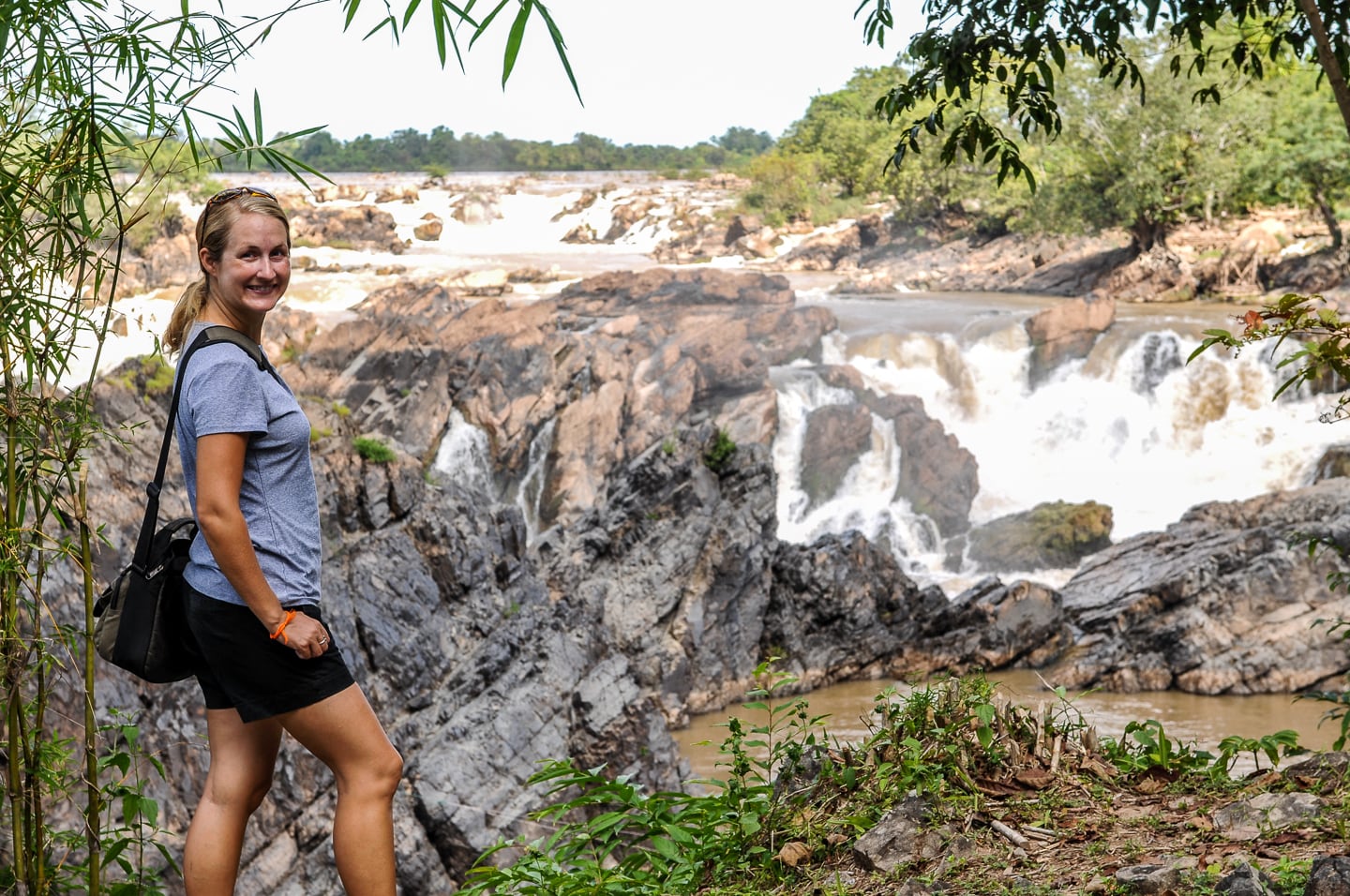 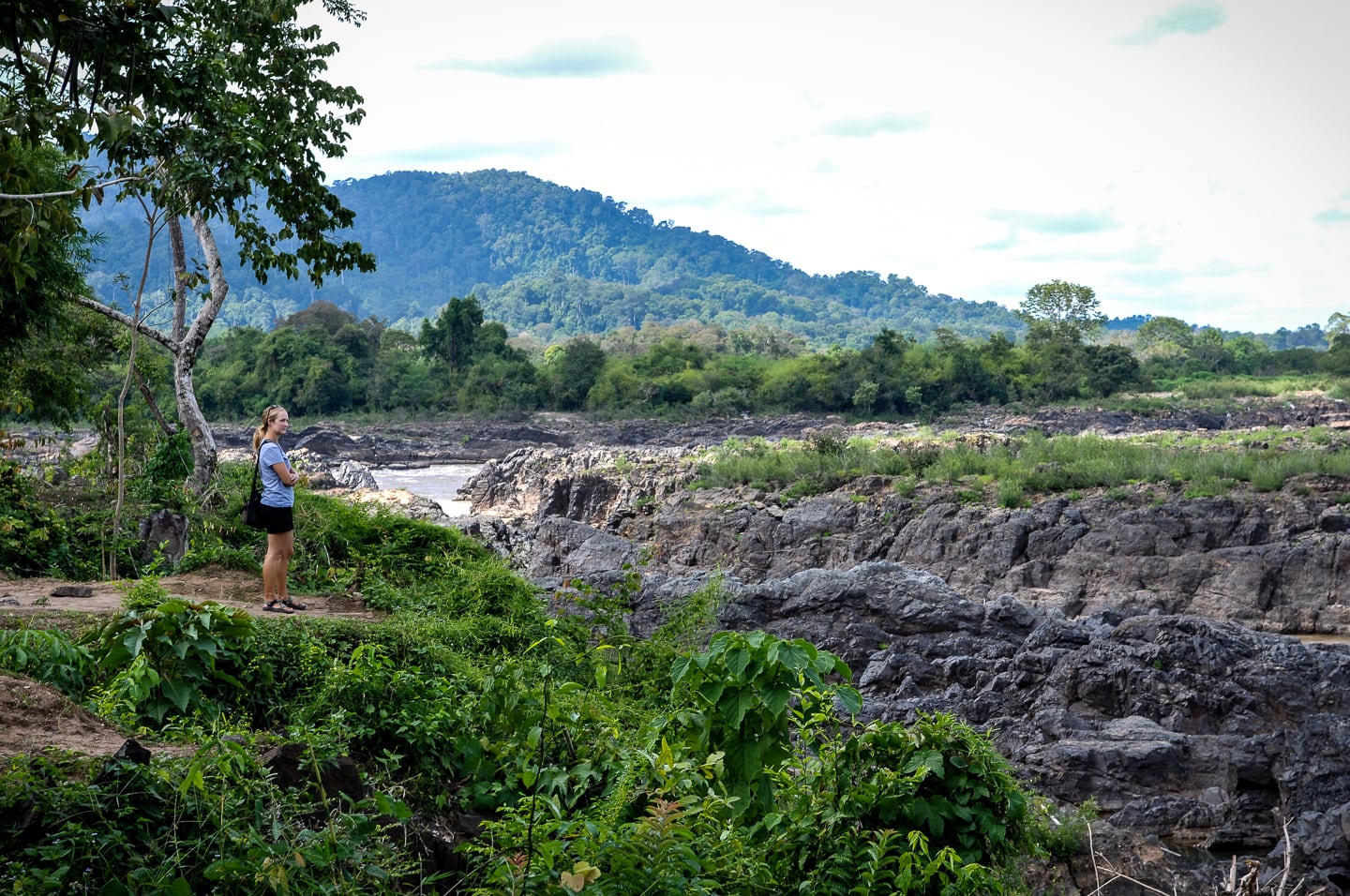 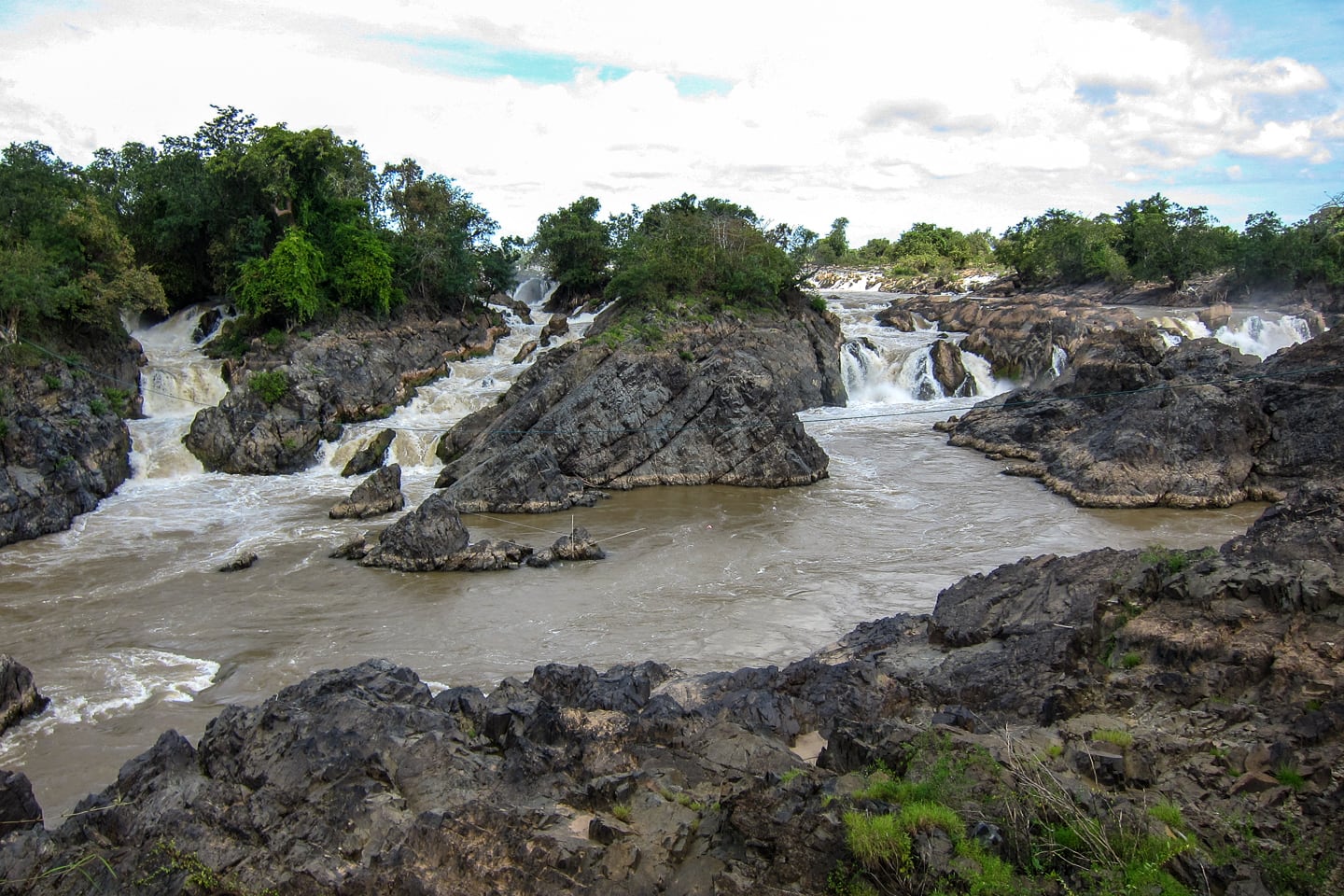 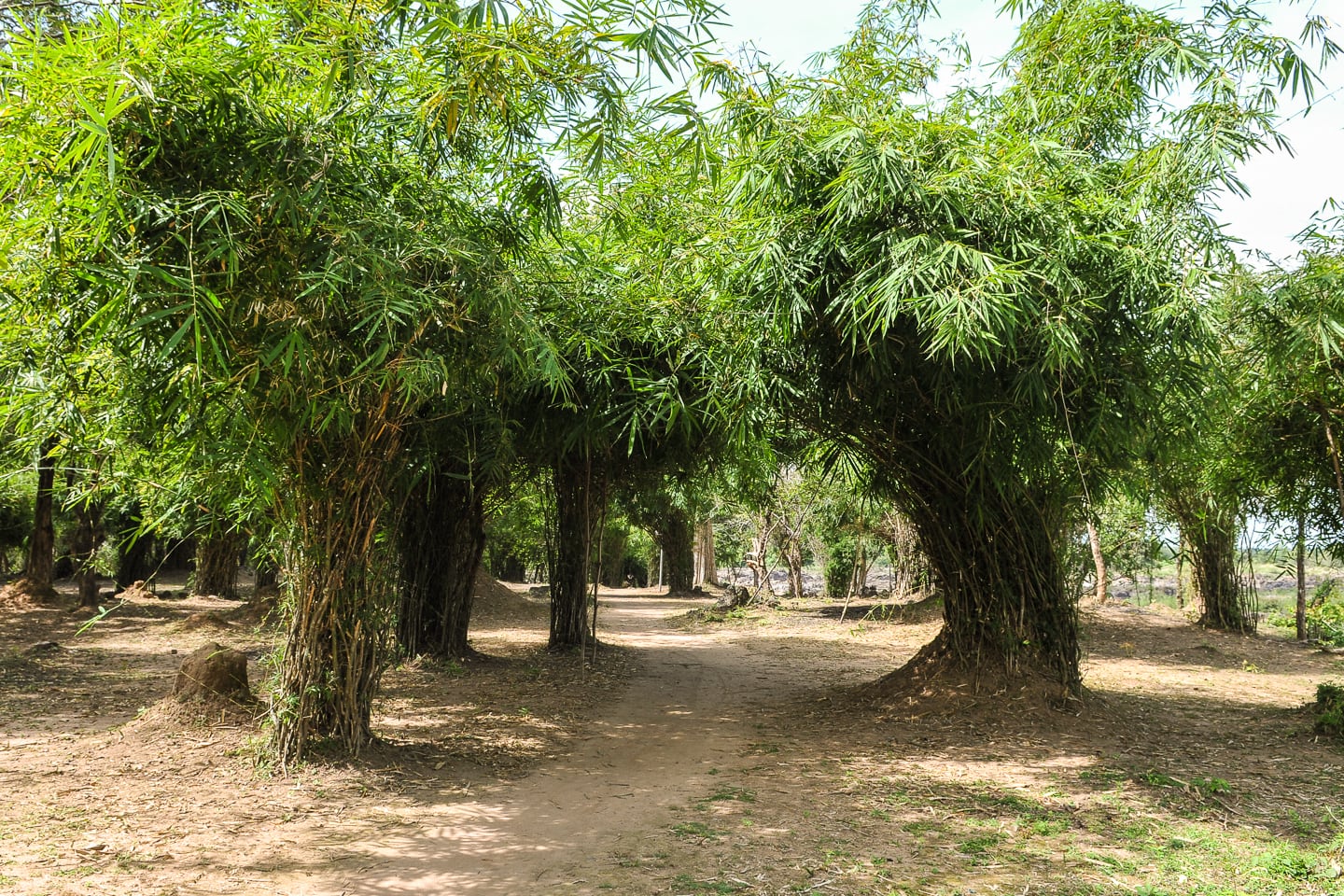 Walking farther afield, you’ll run into Don Khon’s “beach.” Being on the heels of rainy season, the water was fast, muddy and generally unappealing for taking a dip, which was a bit of a shame — it was a scorcher of a day! There was a small swimming area divided from the rest of the Mekong, but we hadn’t brought our bathing suits and it wasn’t more than a foot or two deep. 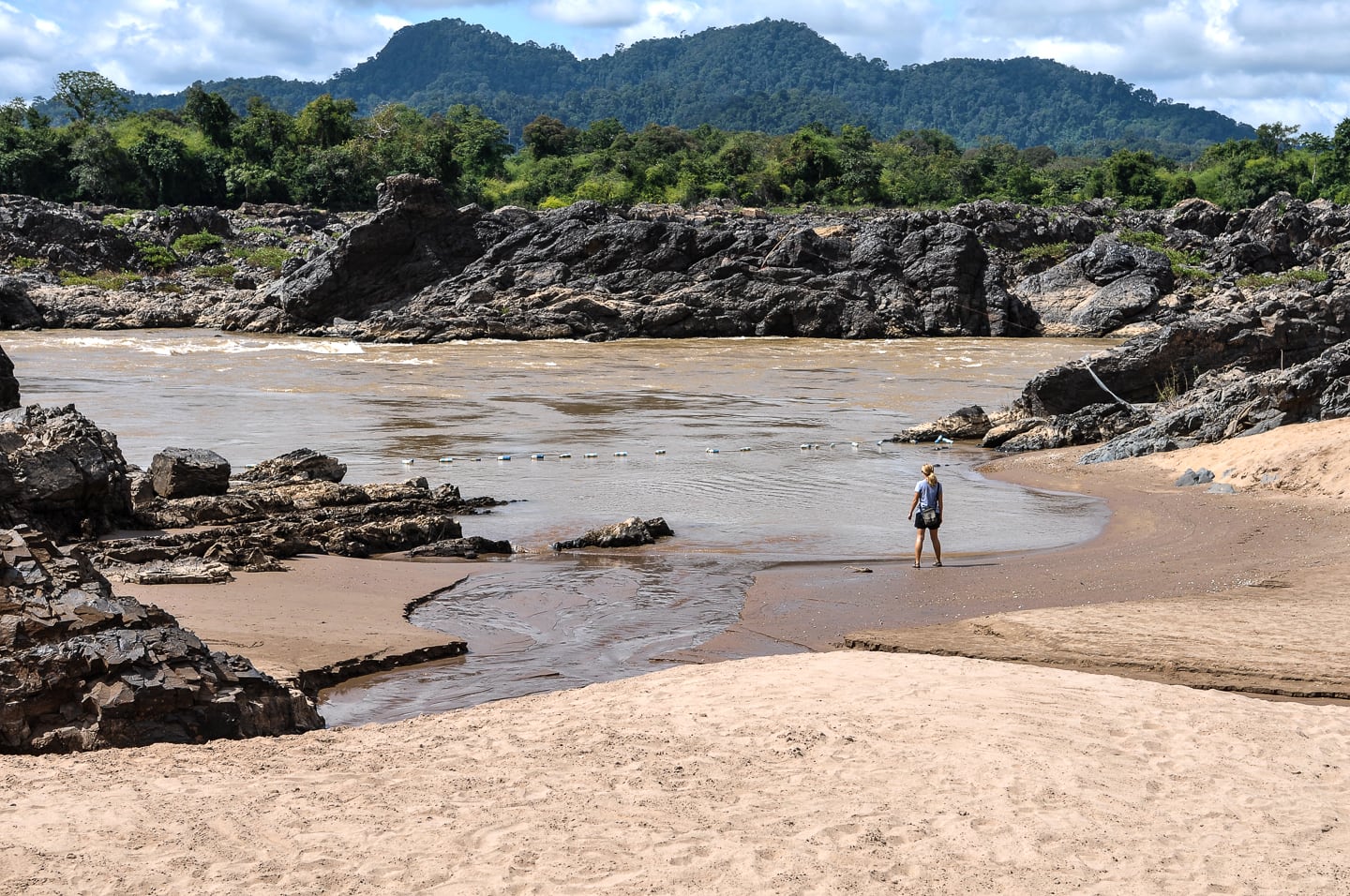 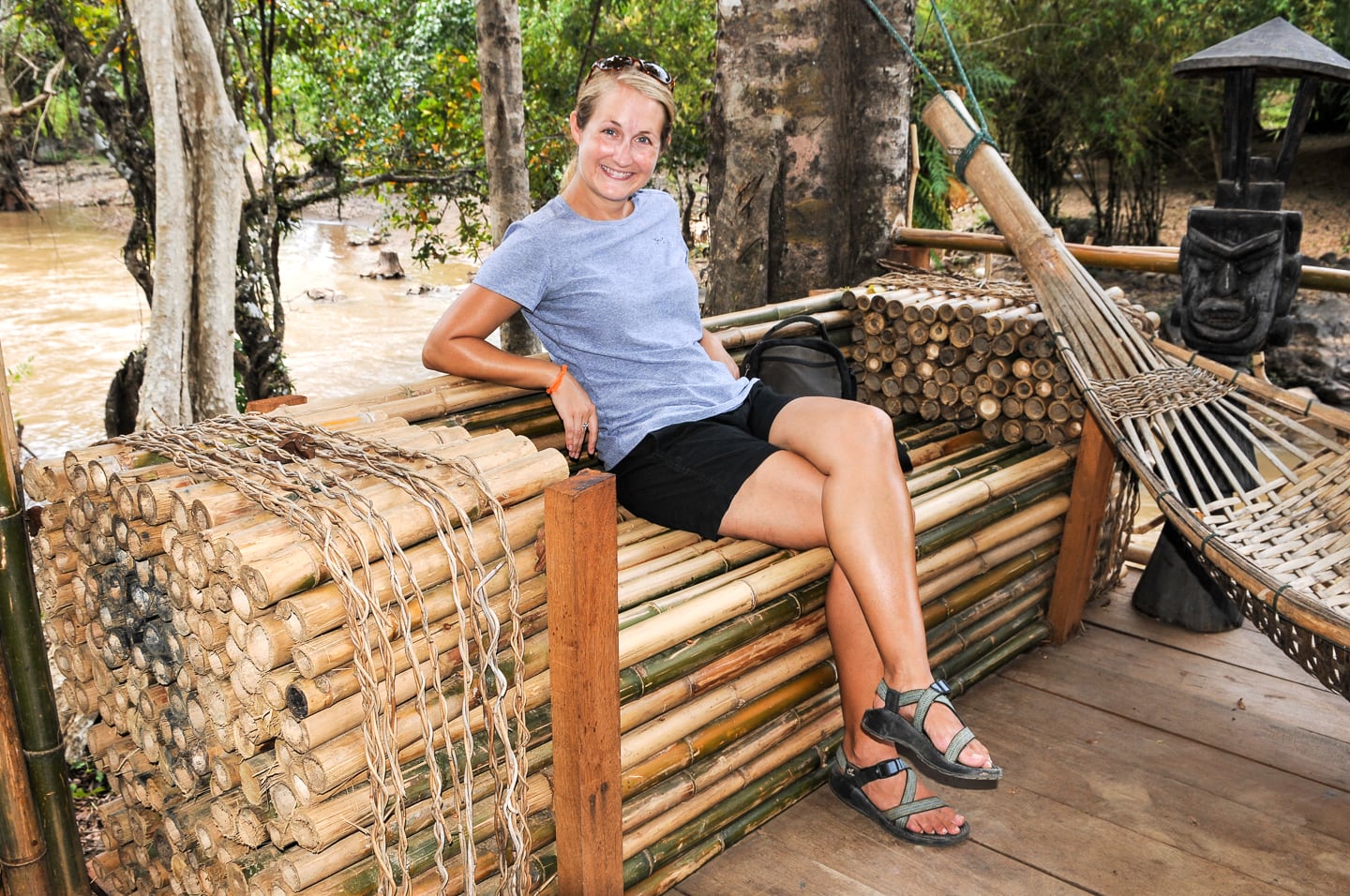 No bikes are allowed into the Falls section of the island, which is accessed by crossing a wooden bridge. We left our bikes at a small bamboo coffee shop next to the bridge which had a dedicated covered bike parking area. On our way back from the falls, we decided to grab an iced coffee at the coffee shop and enjoy its location and views right on a Mekong tributary. I have to admit, Bamboo Coffee Bar is pretty cool and not what you’d expect in these here parts. We split the gourmet iced coffee (which was delicious), which was a whopping 15,000 kip (US$1.80). I do actually remember Lori giving me a bit of a hard time for wanting such luxuries, but I guess when you’re traveling on a budget it’s all relative. 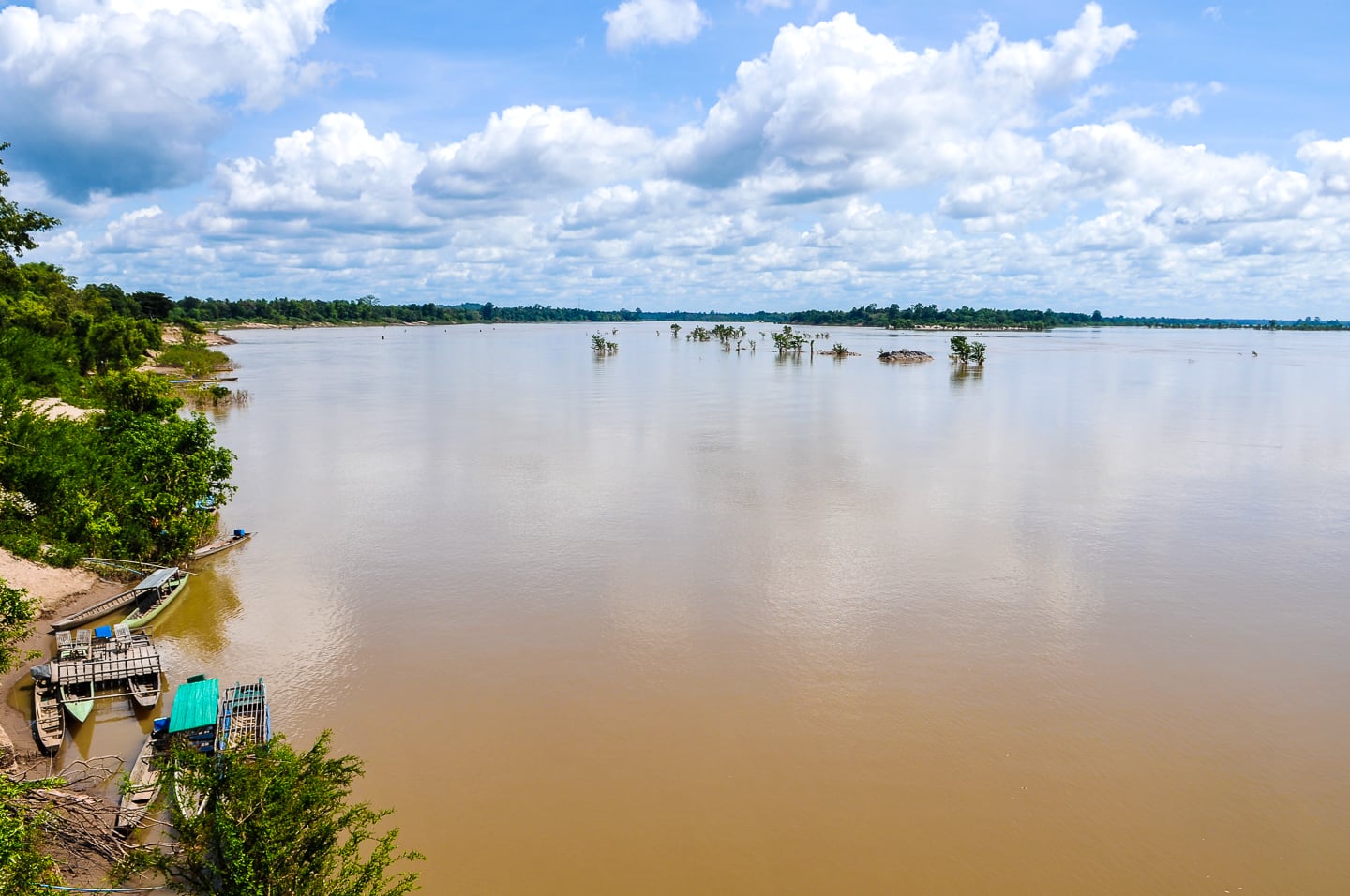 After indulging in our foofy coffee, we set out to the far ends of Don Khon. The island measures about 3 miles long by 2 miles wide at its widest points, so we had a bit of riding ahead of us in the hot Lao sun. When we finally reached the other end, the scene was much different from the Li Phi Falls side as we viewed the expansive Mekong spread out to the horizon. Some days, you can even spot Irrawaddy Dolphins frolicking in the river from this vantage point, but alas, not today. 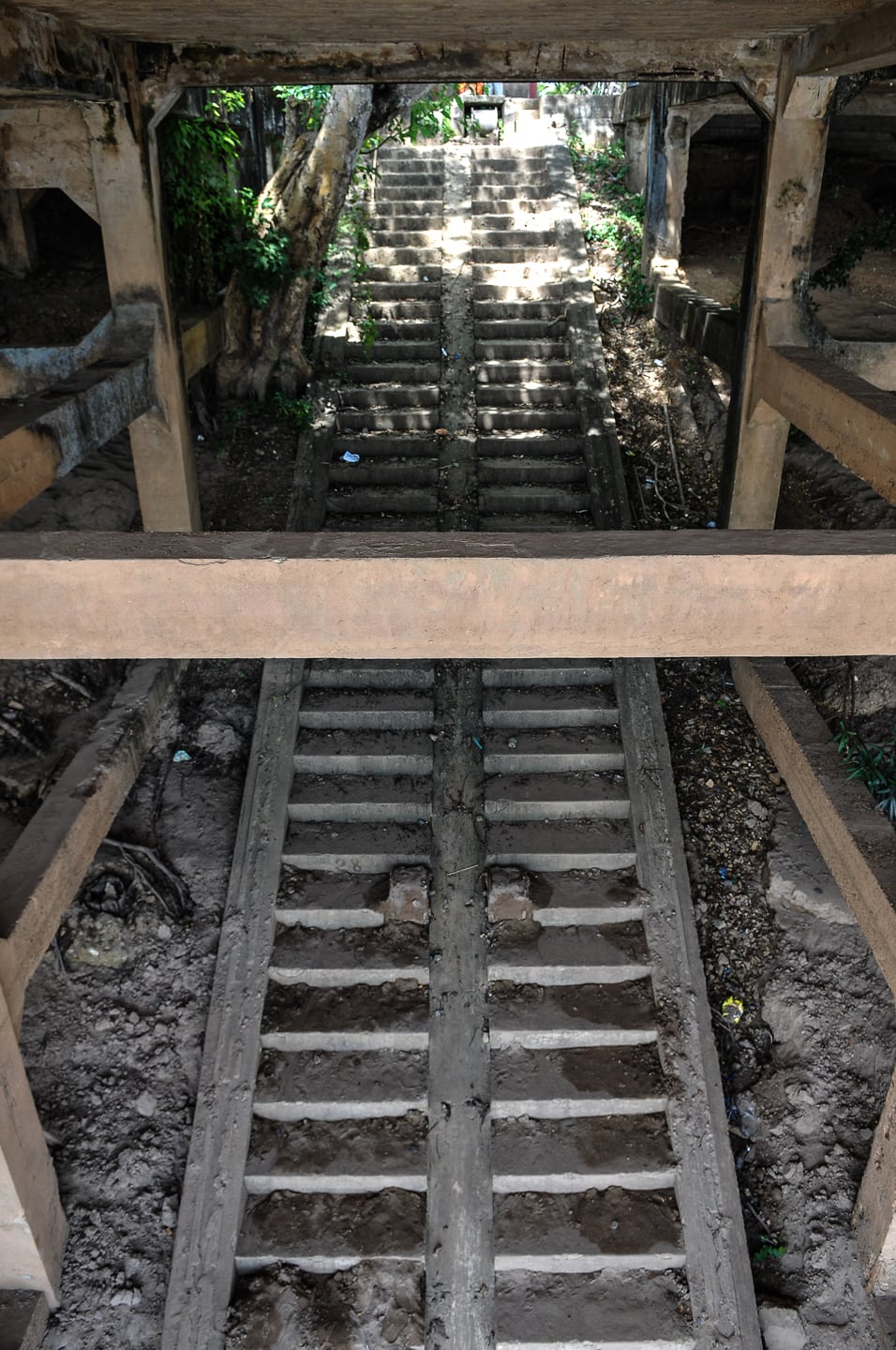 At the end of the road, we came across this (above). These aren’t just steps down to the river. The Mekong has long been a critical water link for the region, and the French colonial period was no exception. The French desperately wanted a trade route into China and saw the Mekong (much of which they controlled in the 19th century) as their meal ticket to the Middle Kingdom. The Mekong is a beautifully wide and navigable waterway over most of its length from the Vietnam Delta to the Chinese border — save for one particular area: 4,000 Islands.

How frustrating it must of been for the French to have gone through all the work to colonize the region and oppress millions just to have their master plan foiled by some very big rocks on one little stretch of a massive river. Nevertheless, they persevered in the face of heavy rains, Malaria and many failed attempts to navigate the river until finally landing on the idea in the early 20th century of building a railroad over the islands spanning the unnavigable stretch of the river, hence the birth of the Don Det – Don Khon narrow gauge railway. 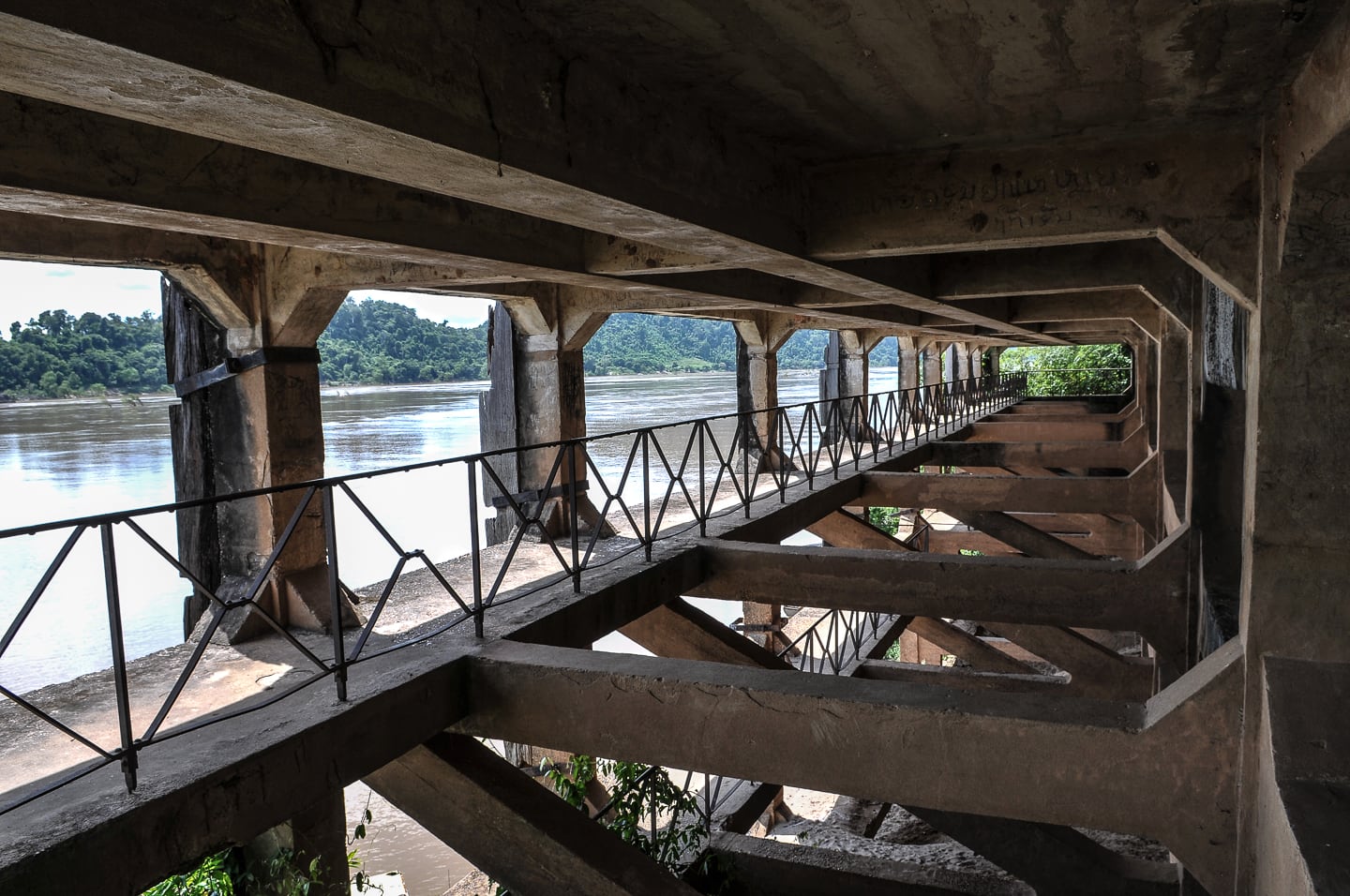 The idea was that boats coming from the north would pull up to a pier at Don Det and have their cargo offloaded to a narrow-gauge locomotive (like the one unearthed and on display below), which then would freight the precious cargo down to the southern tip of Don Khon (via a bridge connecting the two islands), at which point the cargo would again be offloaded to a barge and sent on its merry way downriver.

The railway is cool for a number of reasons, particularly because it is still very much shrouded in mystery. There are few written accounts of the railway and not a lot is known. For instance, it isn’t known when exactly the railway was opened or when it ceased operations. Heck, scholars don’t even know what type of freight the railway transported. 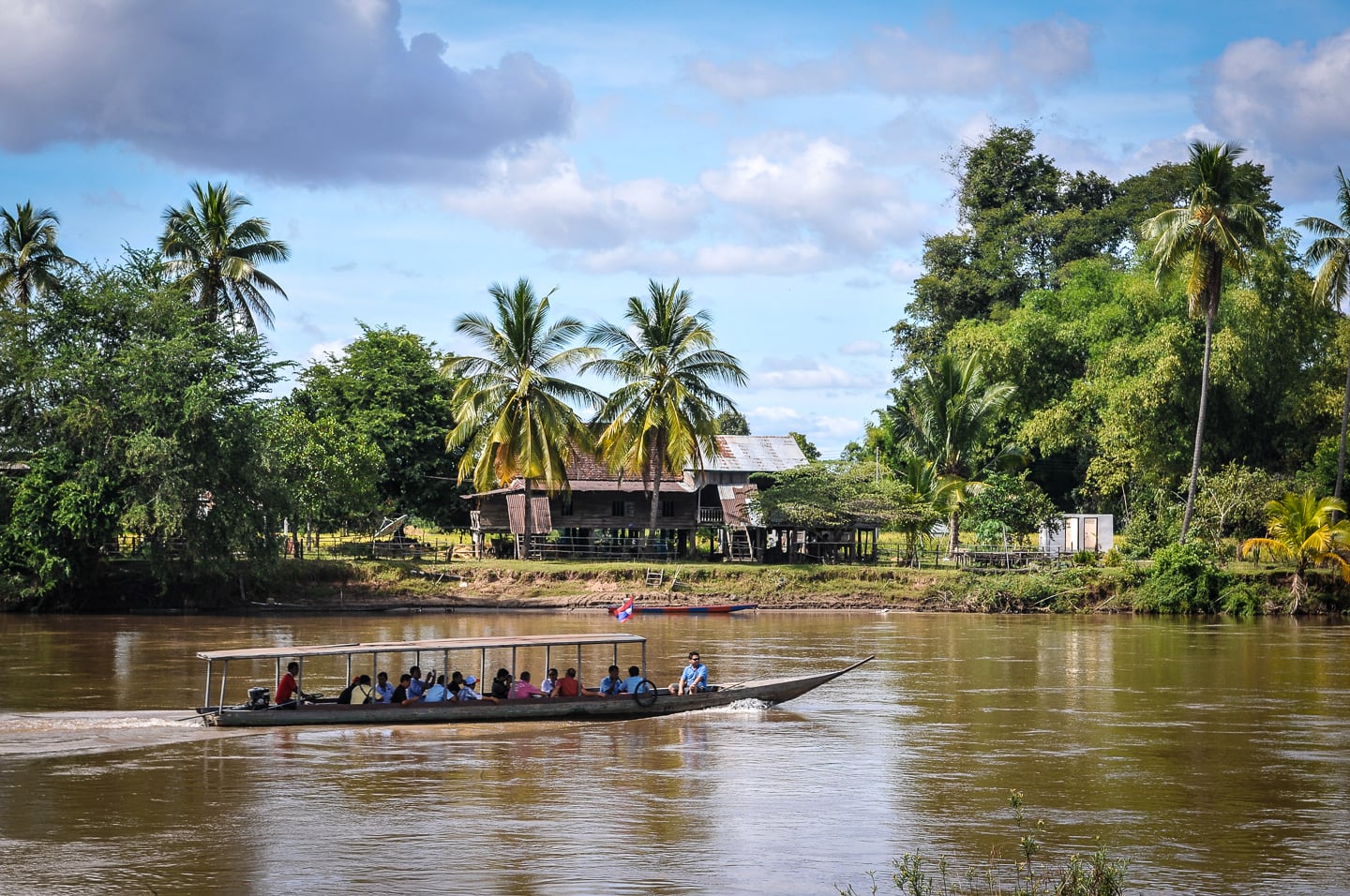 The ride back from the southern tip was relaxed and uneventful, passing a few colorful wats (temples) and lots of daily rural island life. 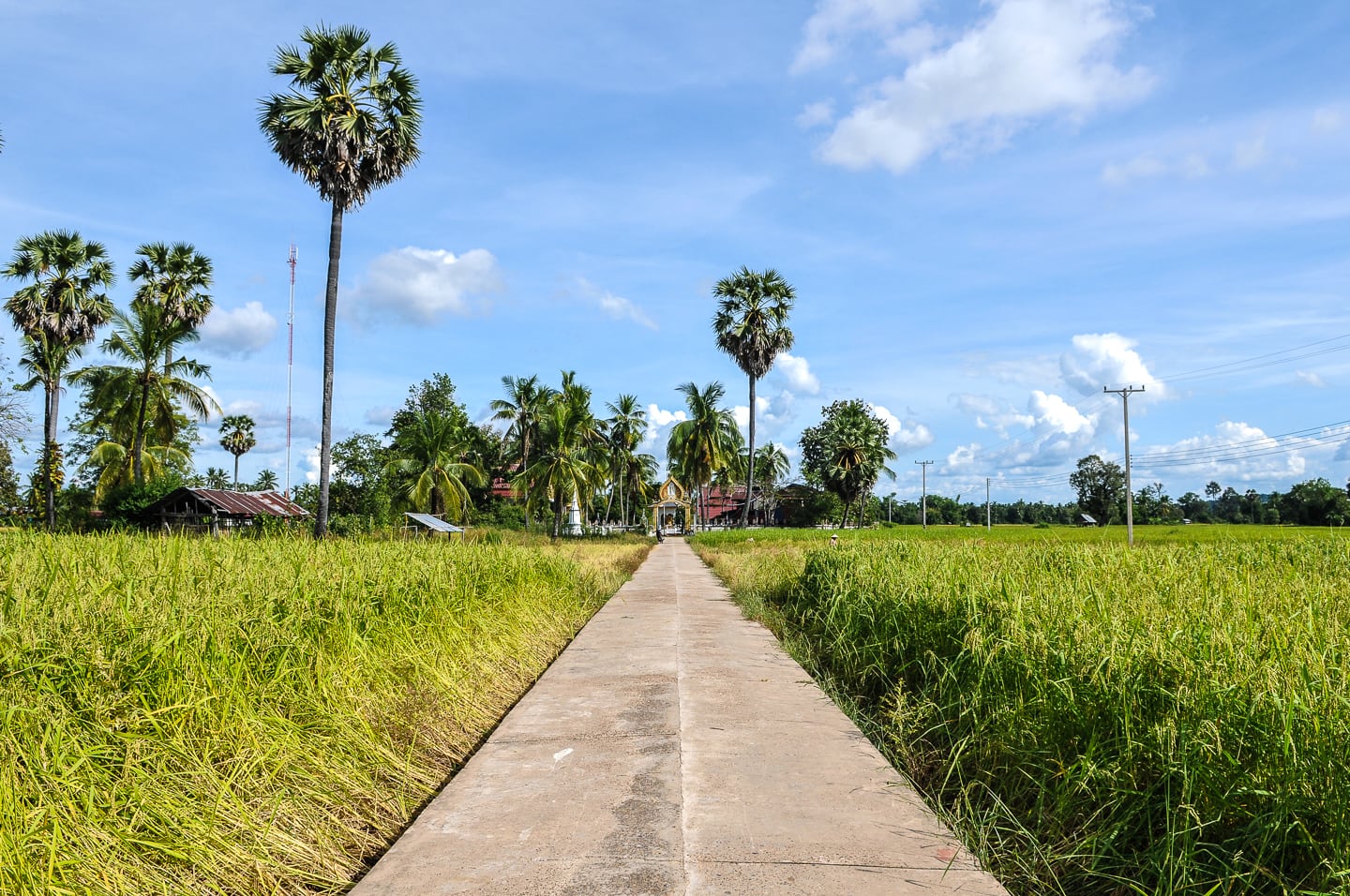 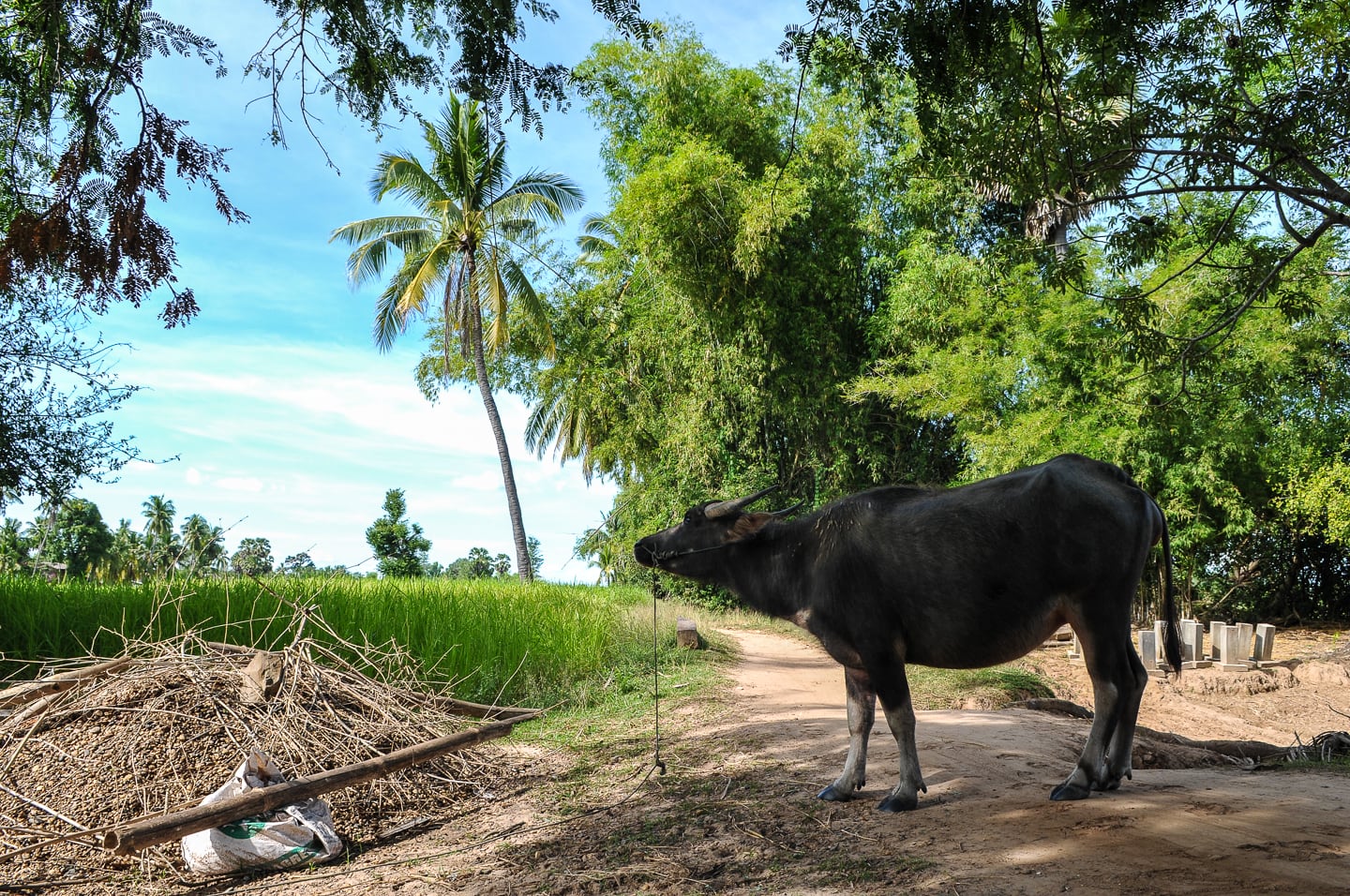 This particularly large and ornery beast was standing in the center of our path. Noises and gestures had no effect…we just had to sit back and wait for the young bull to get a move on. “Island Time,” baby. 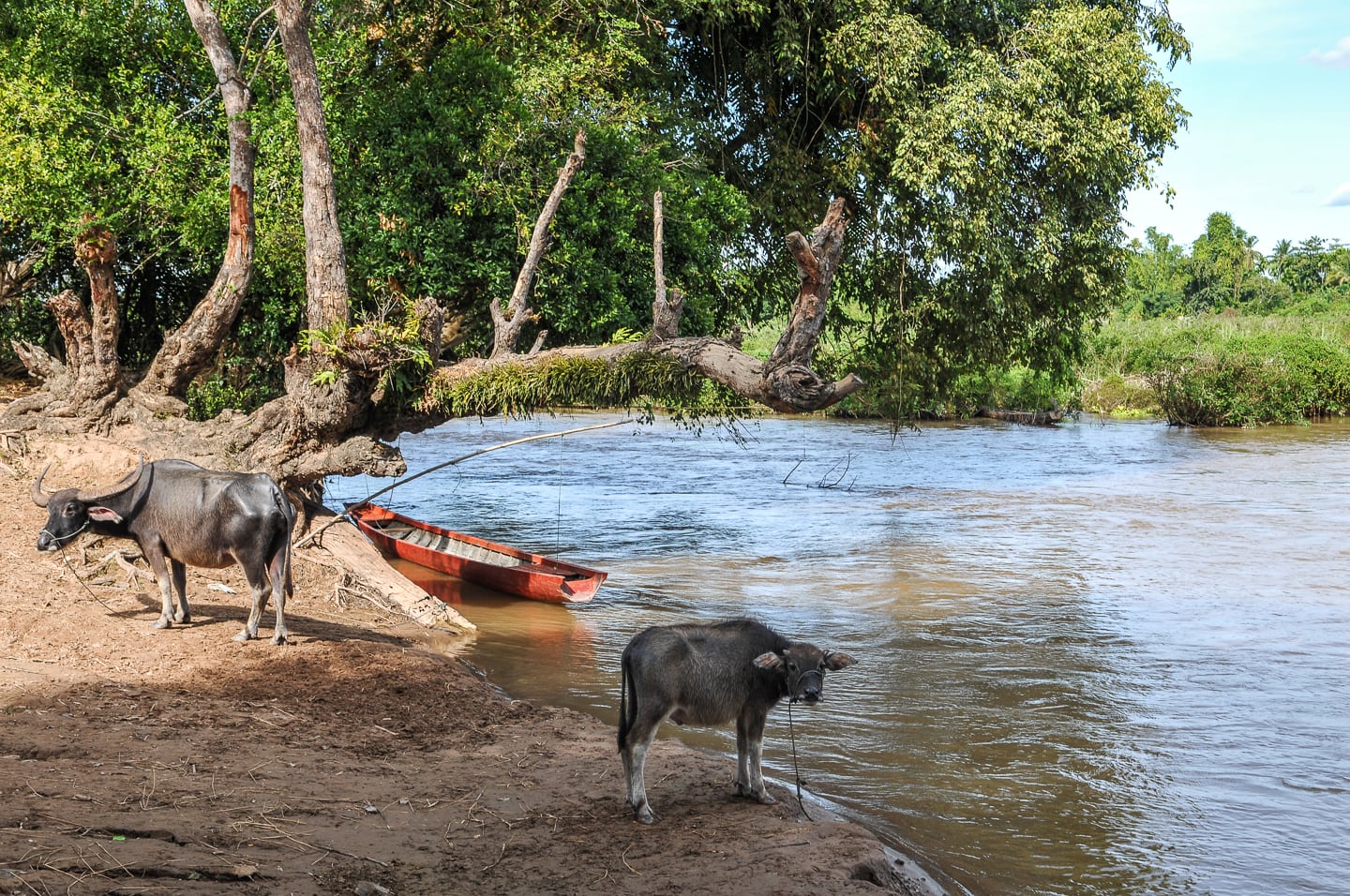 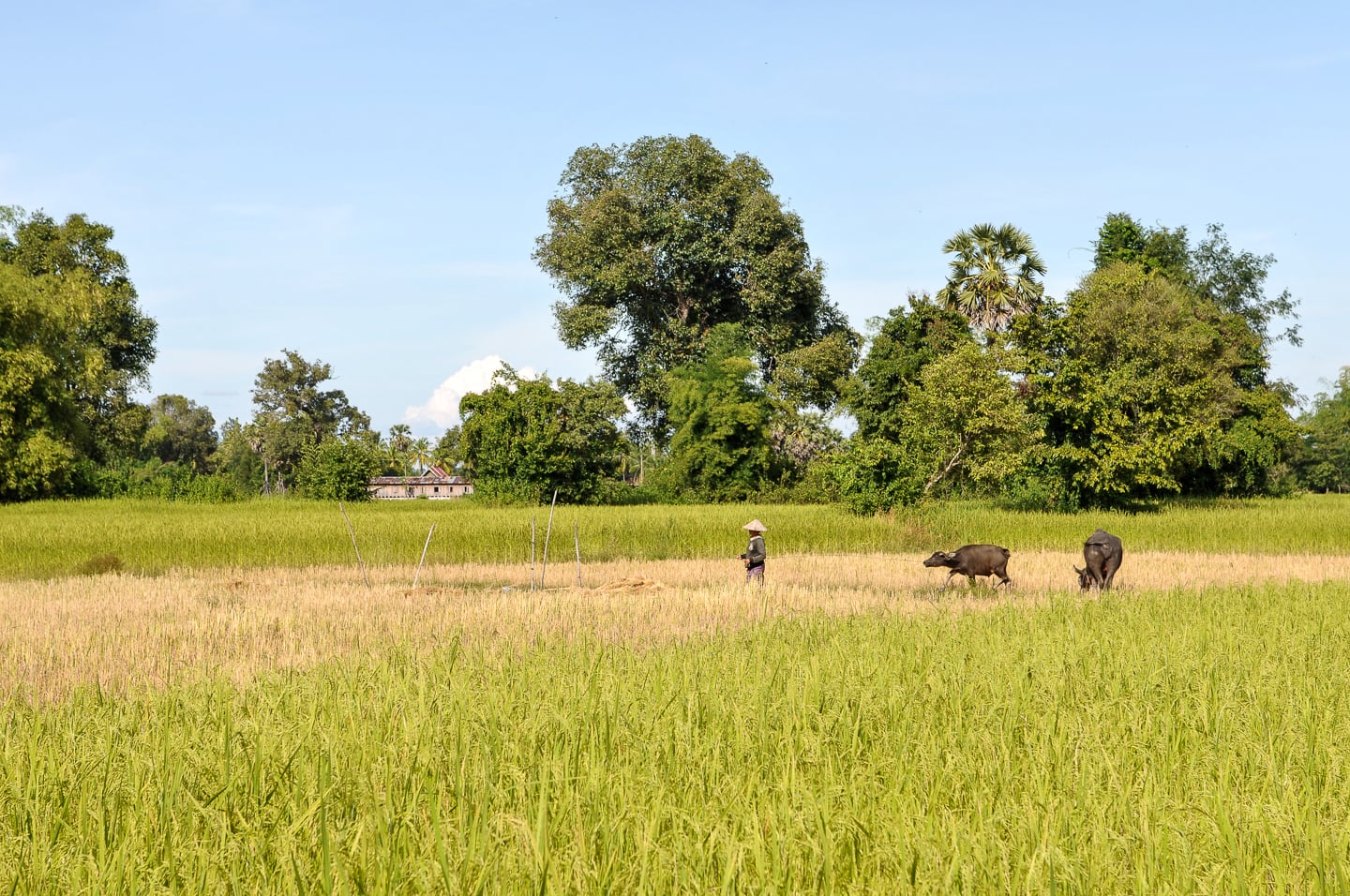 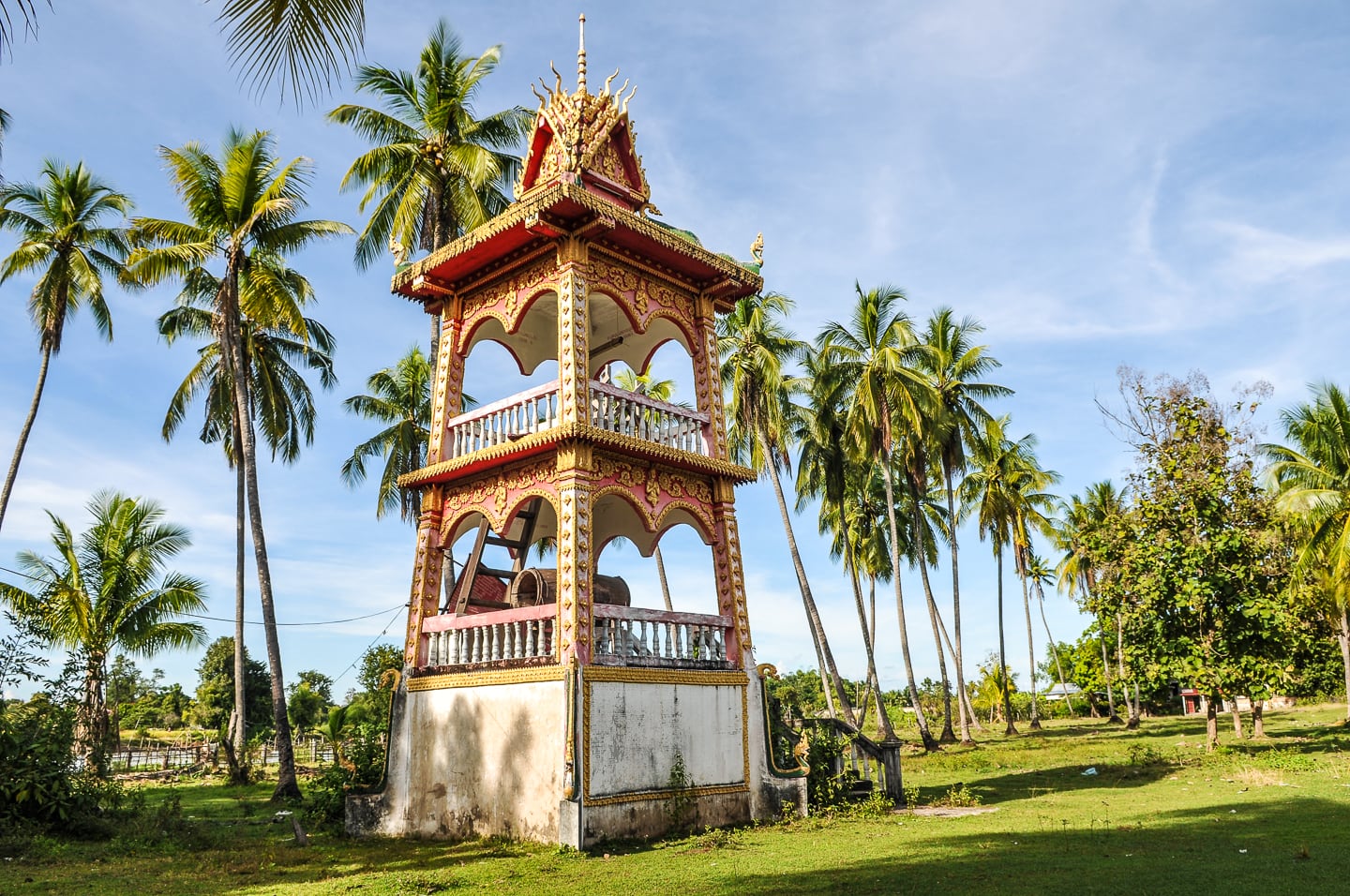 Wat Khon Tai is worth a stop if you happen to be cycling aimlessly around Don Khon. We could see the pagoda (above) from our bungalow across the river and were intrigued. We also observed Buddhist monks flying back and forth from the temple via longtail boat, which made the place even more intriguing… 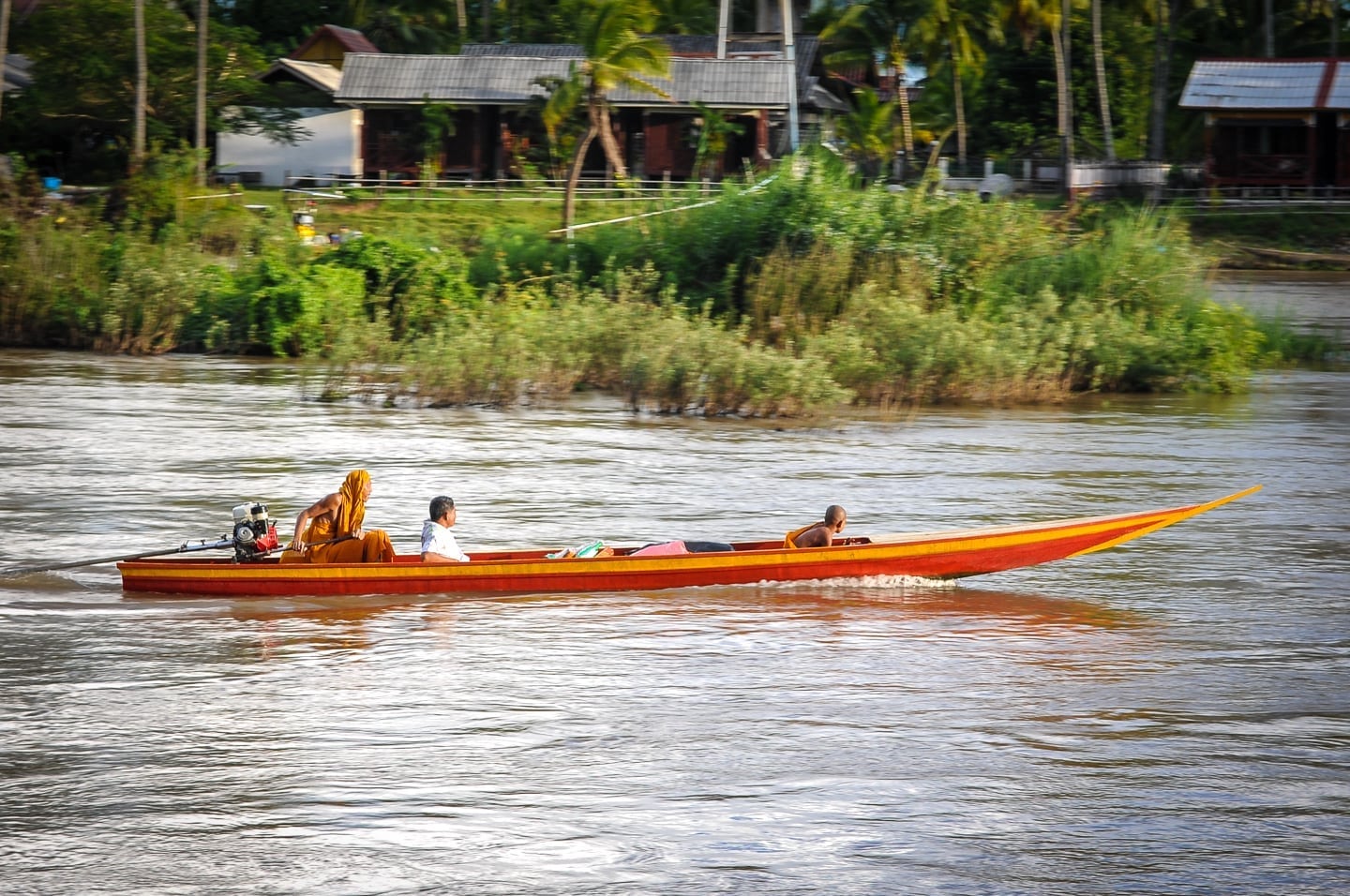 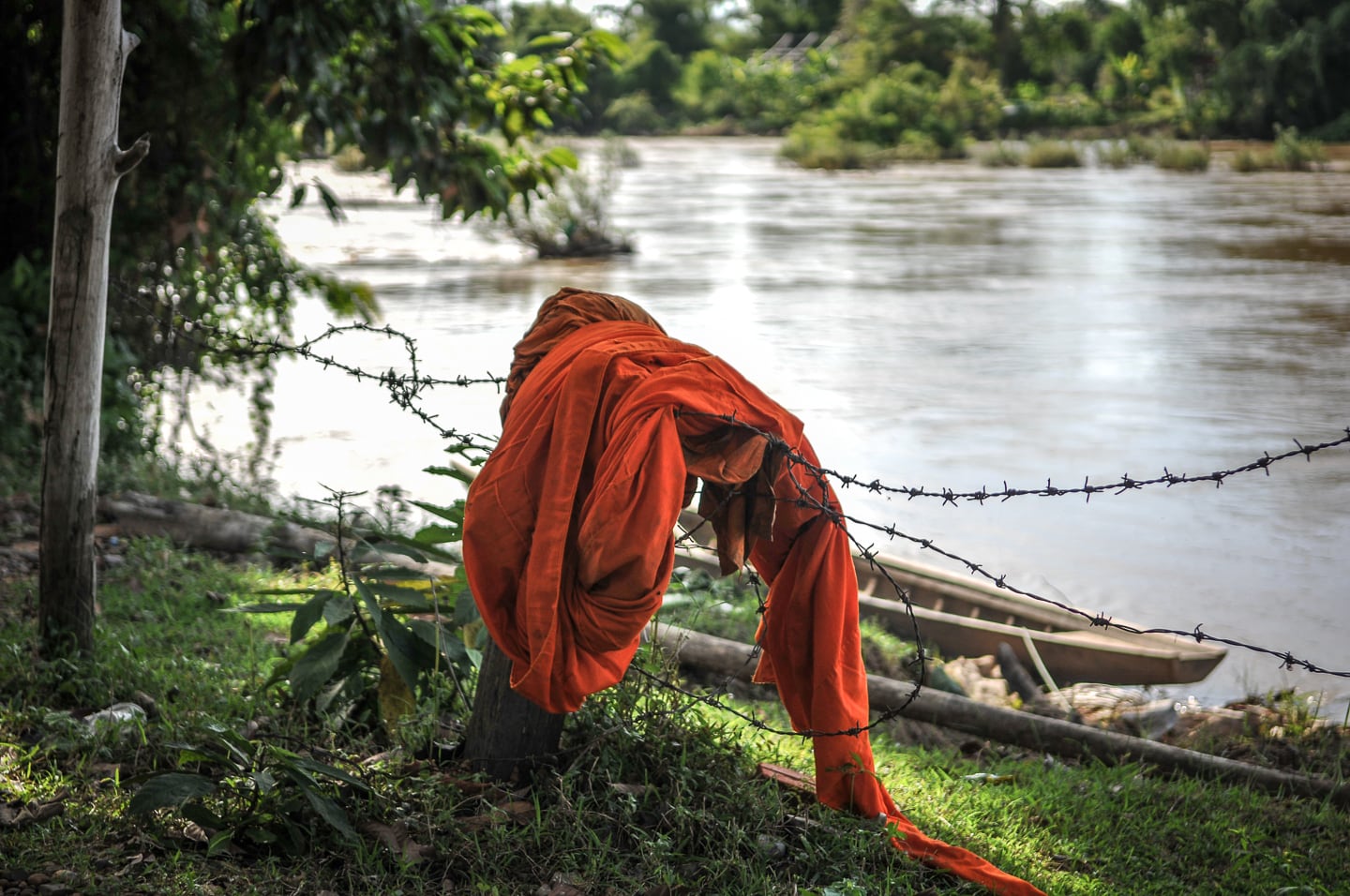 Honestly, seeing this made me a bit uncomfortable, as one of two scenarios in mind had unfolded here: 1) some monk lost his robe while trying to escape over the barbed wire, or 2) there’s a naked monk bathing and frolicking nearby… Either way, neither possibility was comforting. 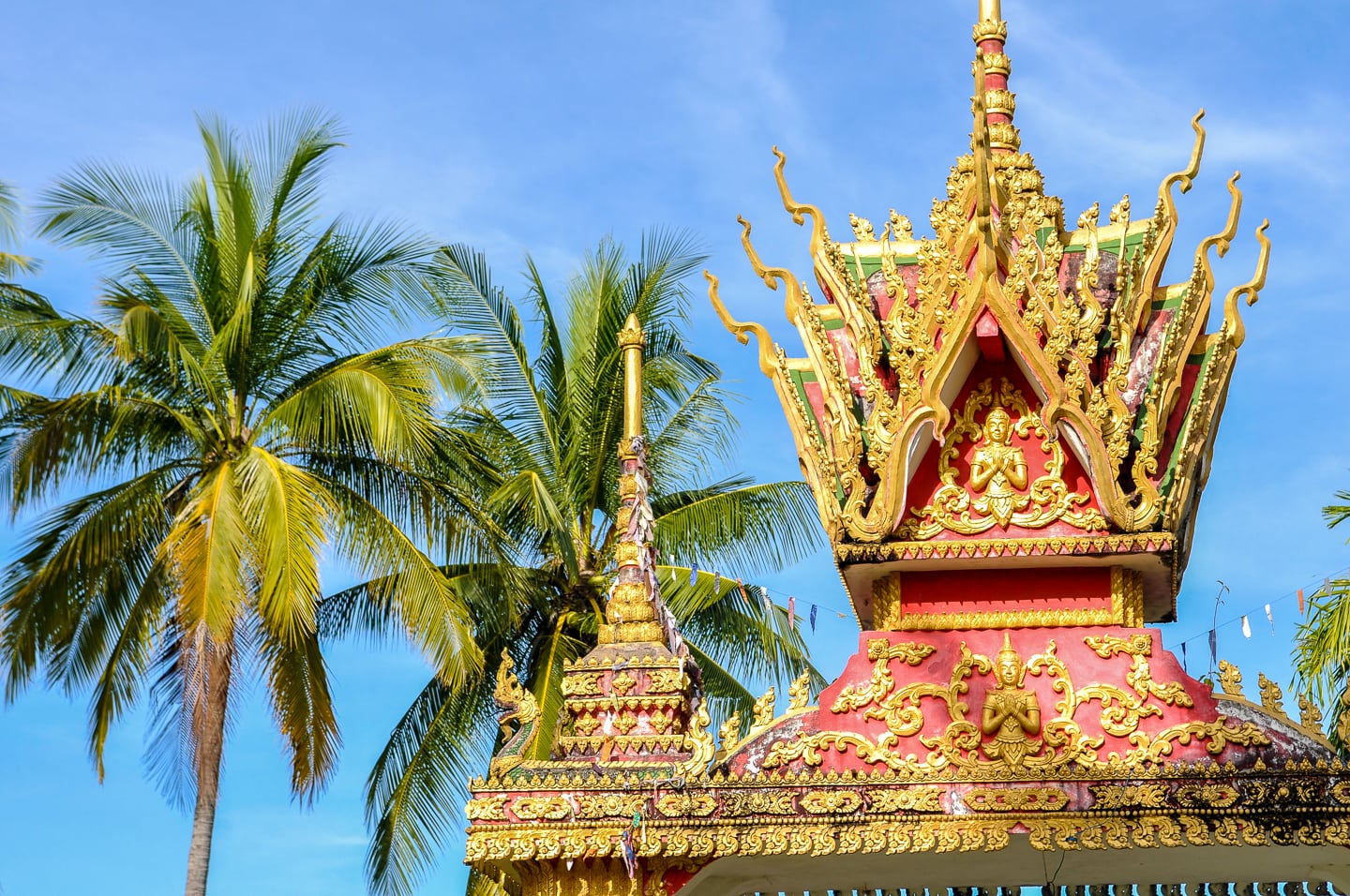 We arrived back at the bike rental place just ahead of sunset, and sure enough, not a soul was around to receive us. We left the bikes where we found them and that was that. In reality, I suppose stealing a bike on a small island would be a bit difficult, but it still felt like they had entrusted us way too much with their shiny cruisers. Just one more thing I love about Laos… 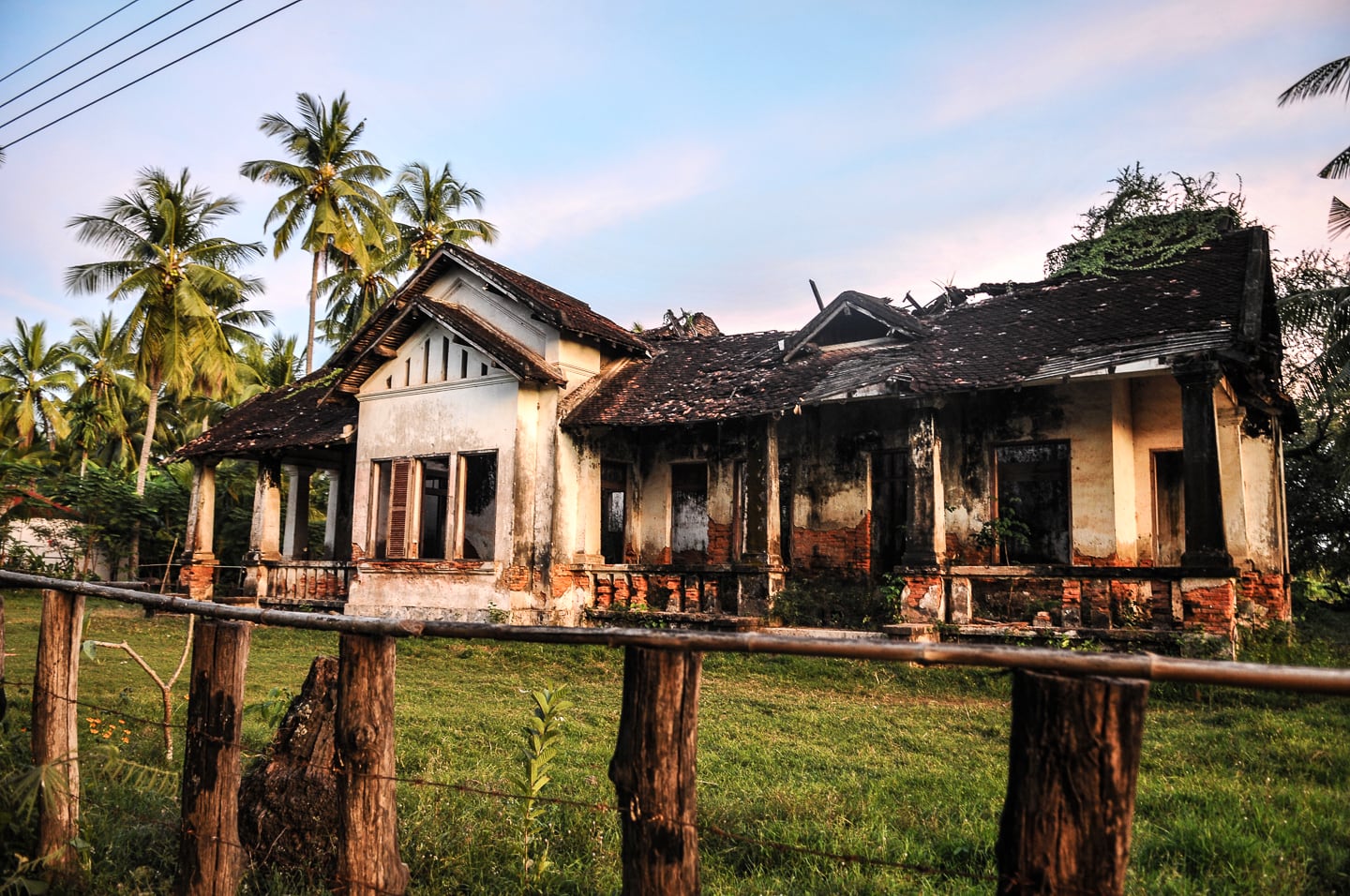 I found myself somewhat obsessed by this house (above). It stood out among all others on the island, not only for its state of disrepair, but also for the stately colonial style. We just didn’t see many structures quite like it. In the years since the departure of the French, no one seemed to care to fix it up, and even more surprising, it seemed no one was currently squatting on the property. Half of me desperately wanted to rehabilitate it to its former glory, while the other half enjoyed the simple and unique beauty of the modern ruin, slowly decaying away on a lonely little island in the middle of the Mekong River. 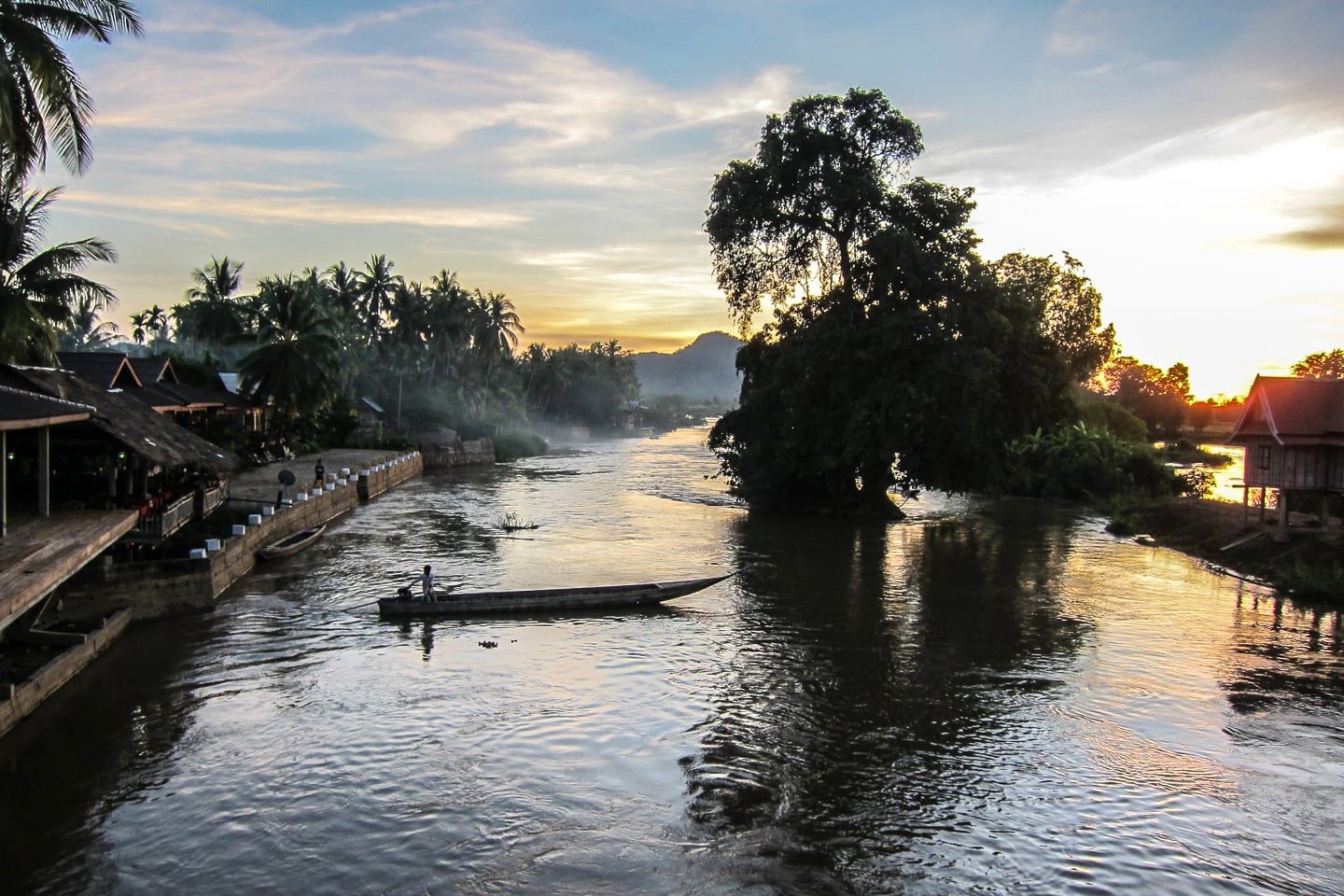 (Above) view from the bridge as we leave Don Khon behind and head back to our guesthouse. Smoke creeps along the banks of the mighty Mekong, changing the sunset into vibrant shades of blue, pink and everything in between. I don’t think its difficult to see why we loved our stay here so much.

It’s hard not to fall in love with this place. 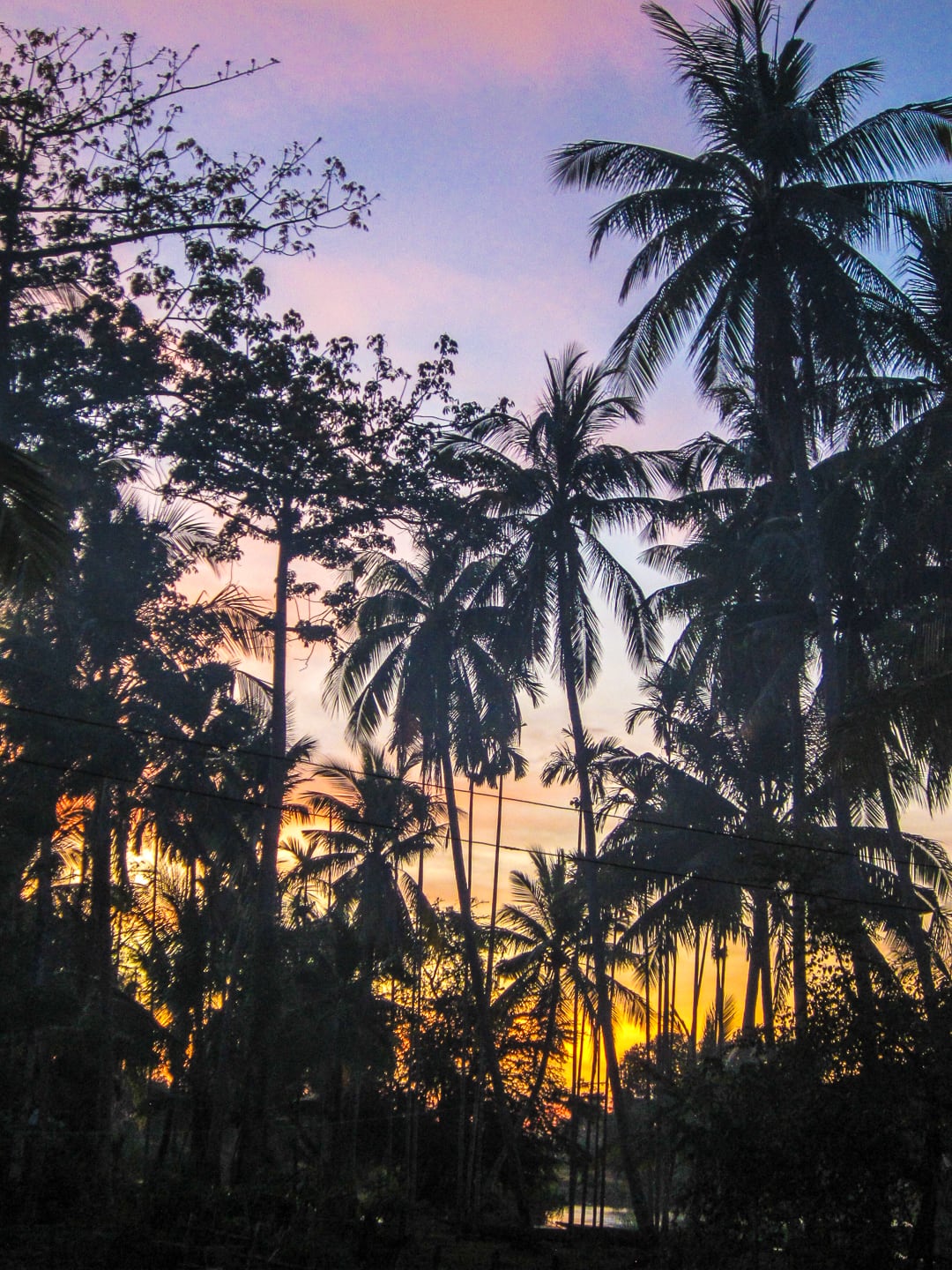