Our third and final day in the capital started back at Hotel Conde watching Dominican life unfold in the square.

Our third and final sightseeing day in the Dominican capitol started back at Hotel Conde, where we had spent the previous morning sipping coffee, nipping ham and cheese sandwiches, and watching Dominican life unfold in the square. 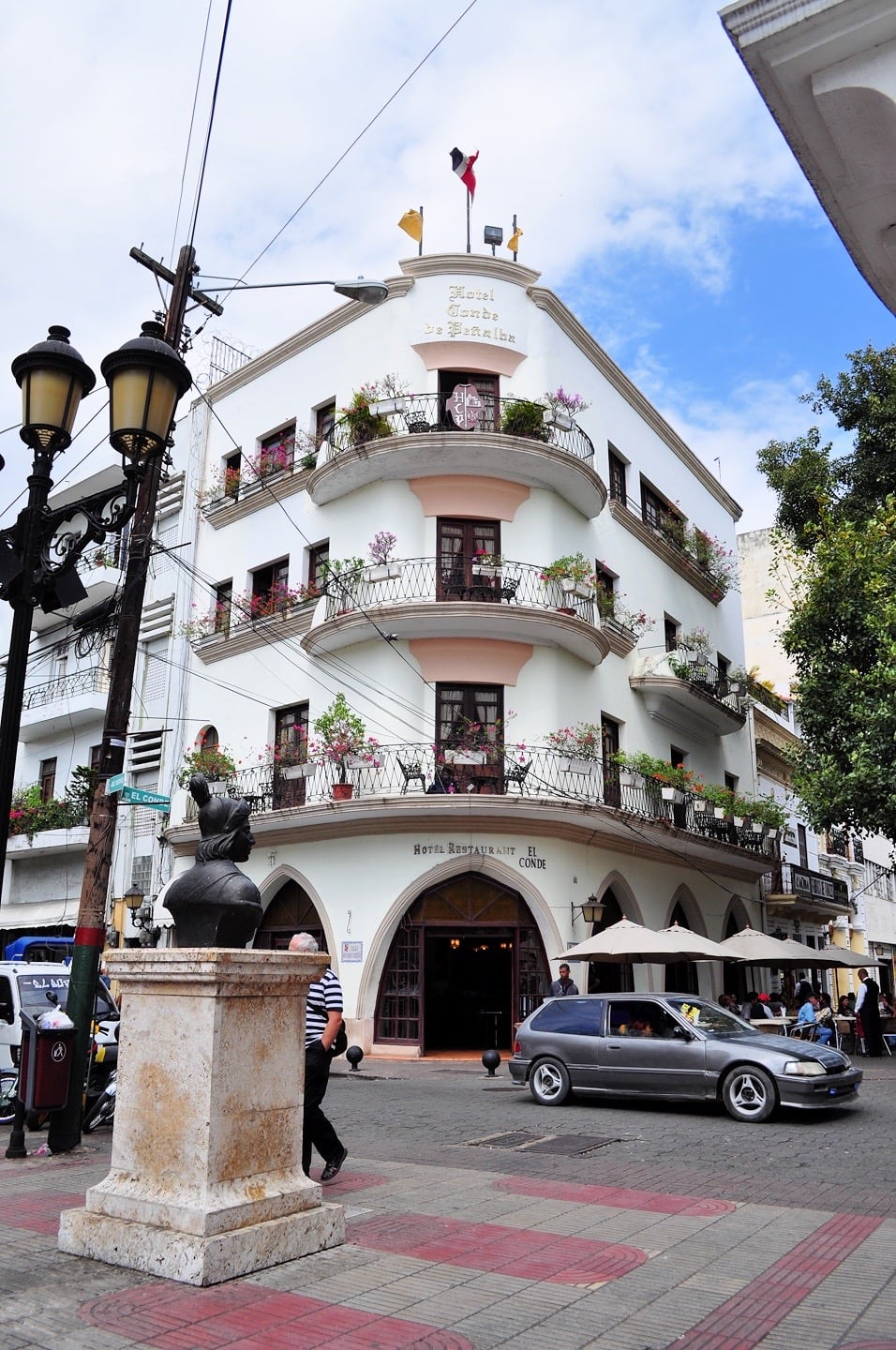 Packed with what appeared to be mostly foreigners, the Hotel Conde restaurant was a nice break from the more authentically Dominican places we had been eating at. Sunday morning had been relatively quiet and free from disruption. 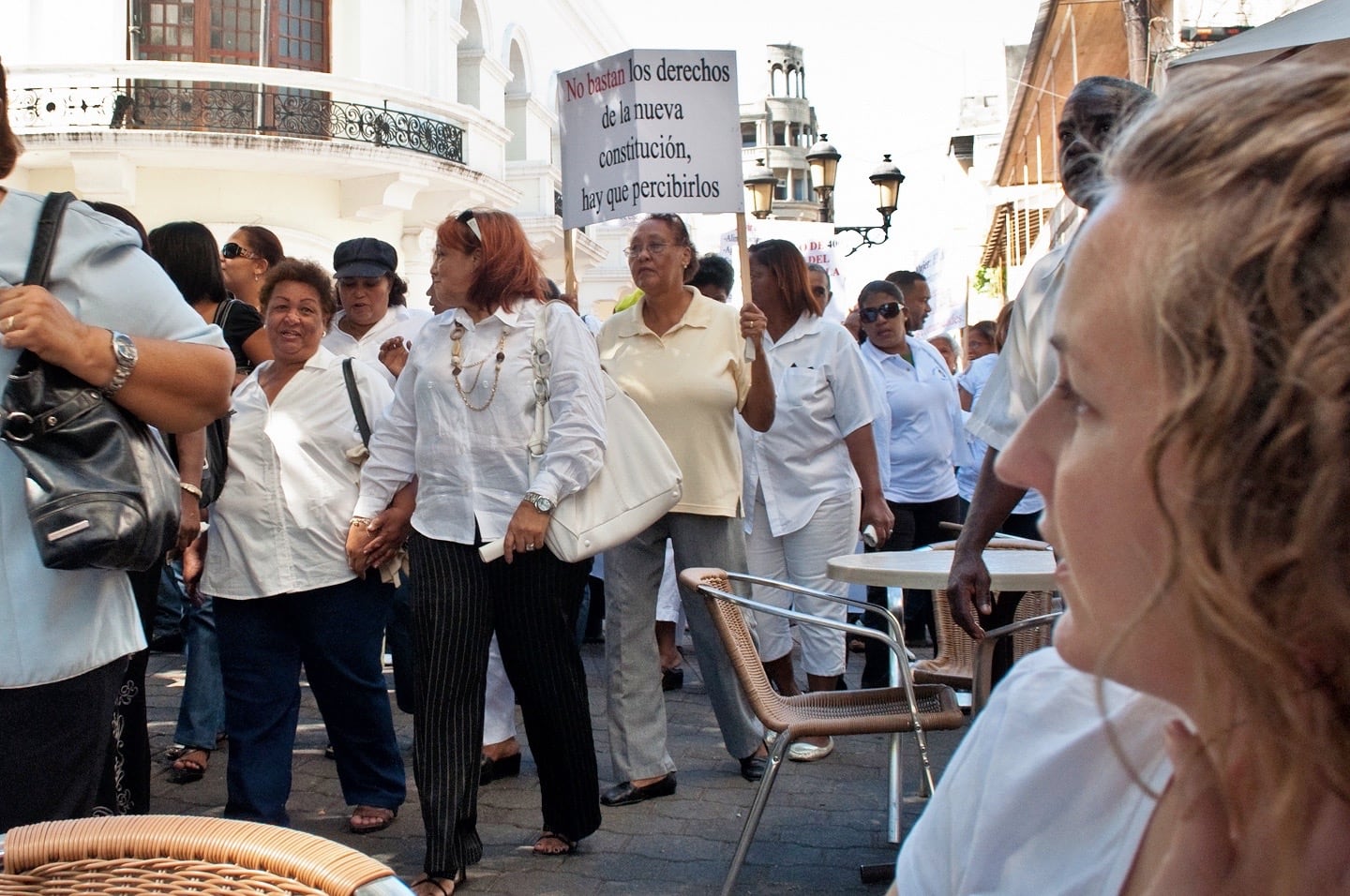 Monday, however, treated us to what initially appeared to be a demonstration of revolutionary proportions for working women’s rights and health issues based on the various signs the large group of women were displaying, all of which got Lori’s attention right away of course. 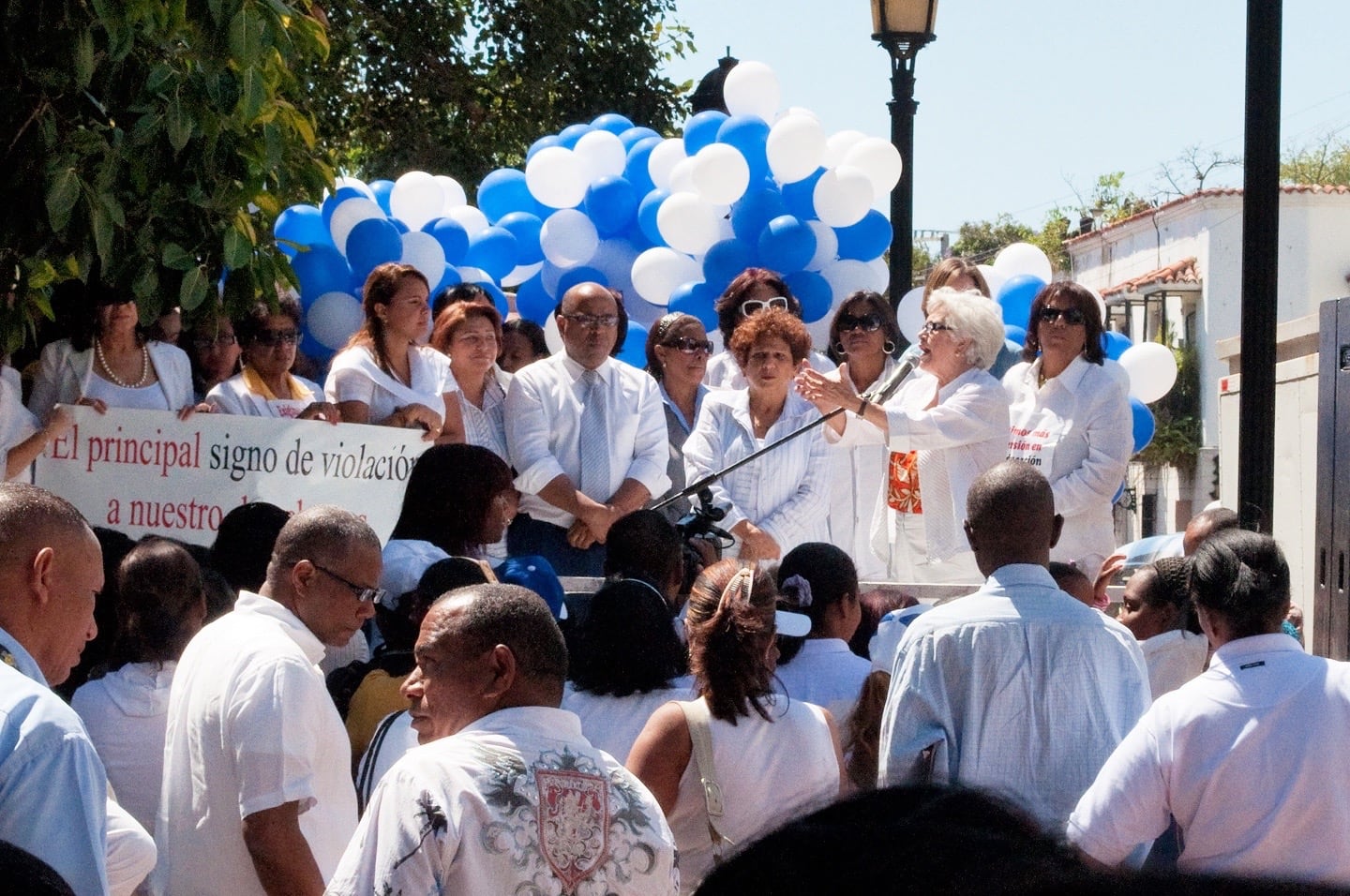 But then the would-be historical proclamation of inalienable rights and passionate appeal for justice I had envisioned unfolding instead segued into half celebration (it was “National Day of the Woman” as we soon learned), and half political rally for a city council candidate (pictured above). Not to say that seeing democracy in action in an often struggling Caribbean nation isn’t exciting…just a different kind of exciting. 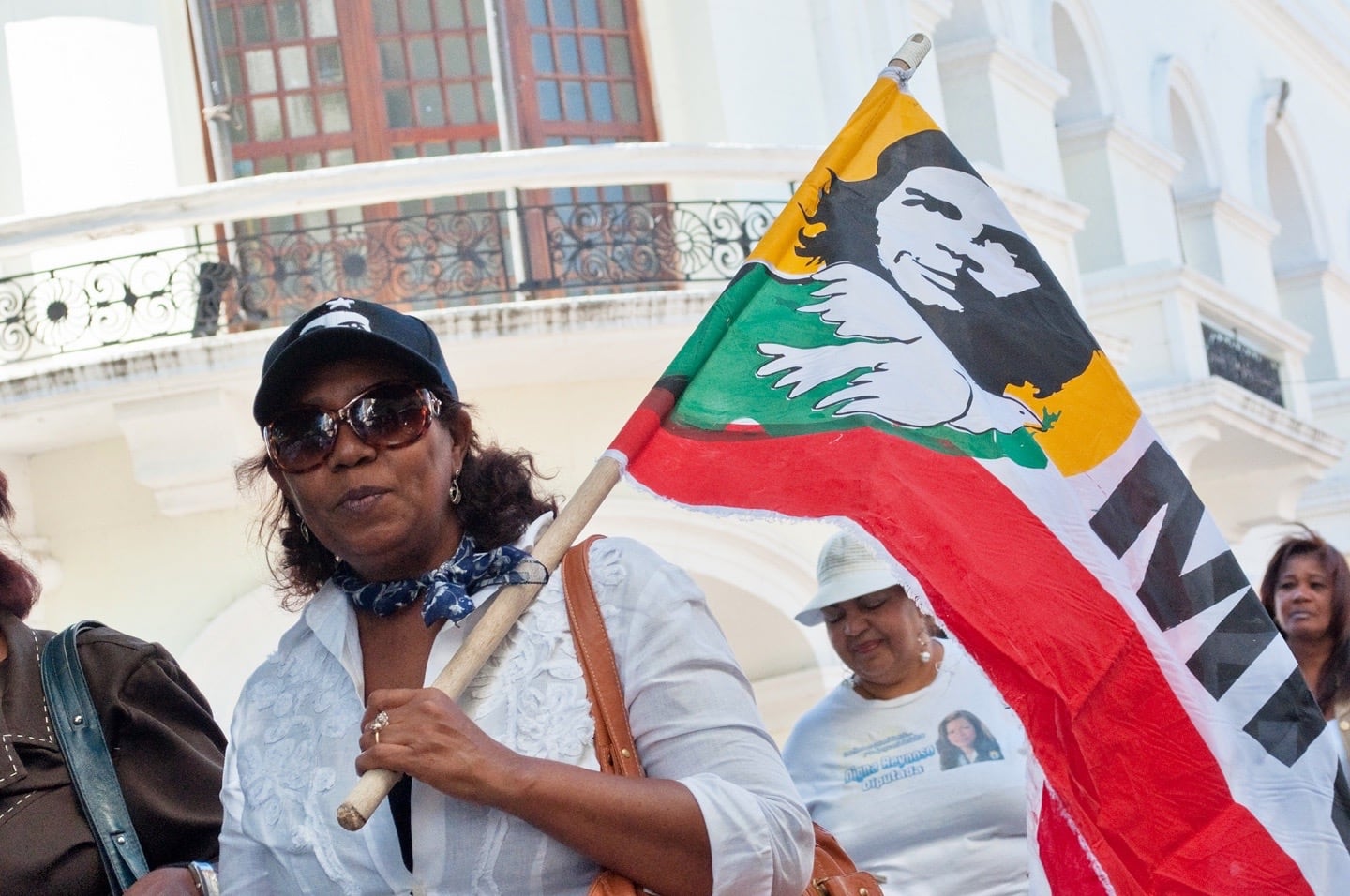 …although I do give this lady mad props for breaking out the Ché. Viva la Revolucion! 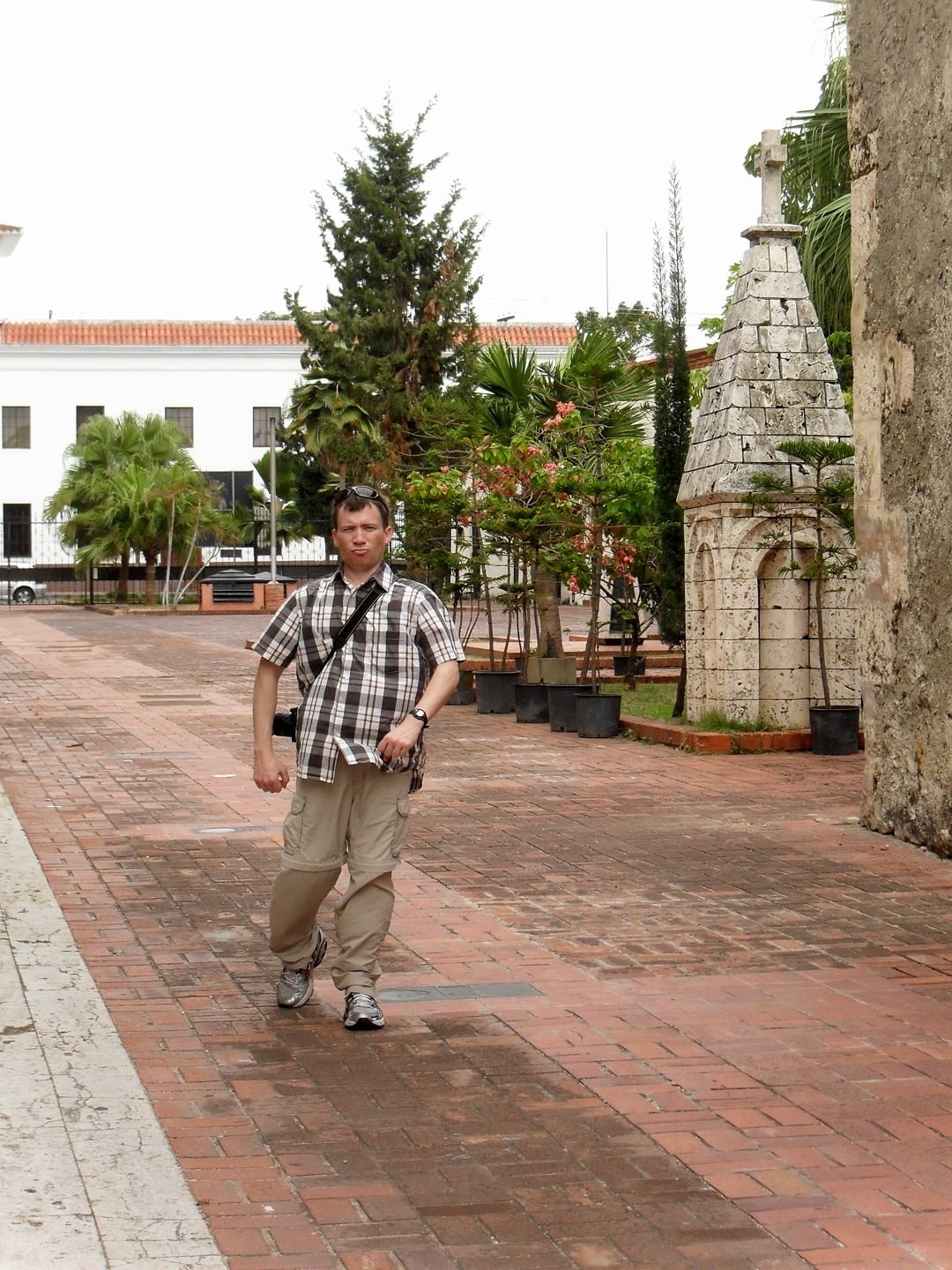 When we had had our fill of café con leche y mujeres we made our way over to the Catedral Primada (First Cathedral) which may or may not have been open yet. More than likely it was not, and we wandered around for a bit until we saw the mammoth doors of the cathedral swing open. 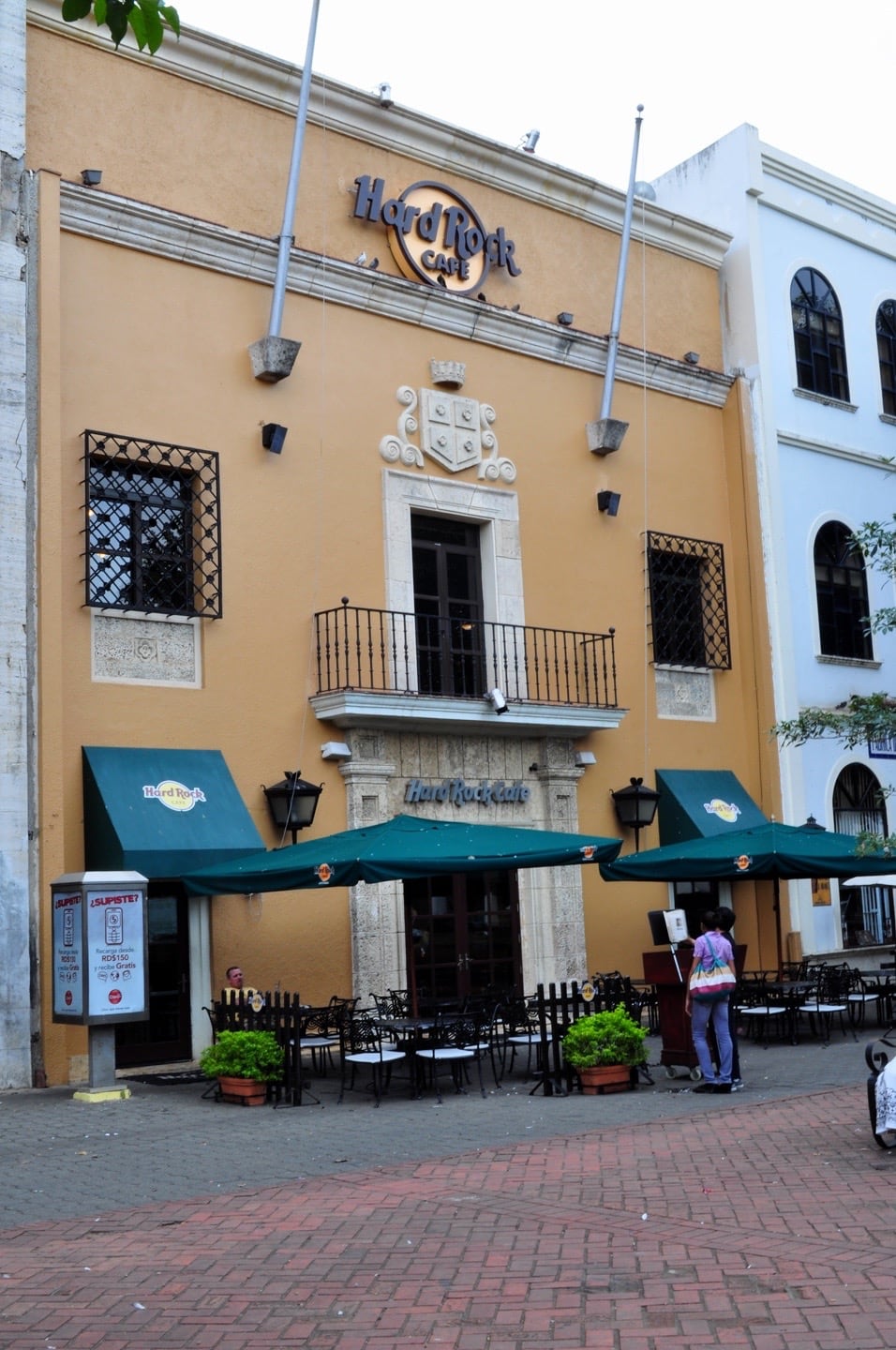 But not before passing a Hard Rock Cafe, which appeared to already have been attracting some business at this early (9am?) hour. 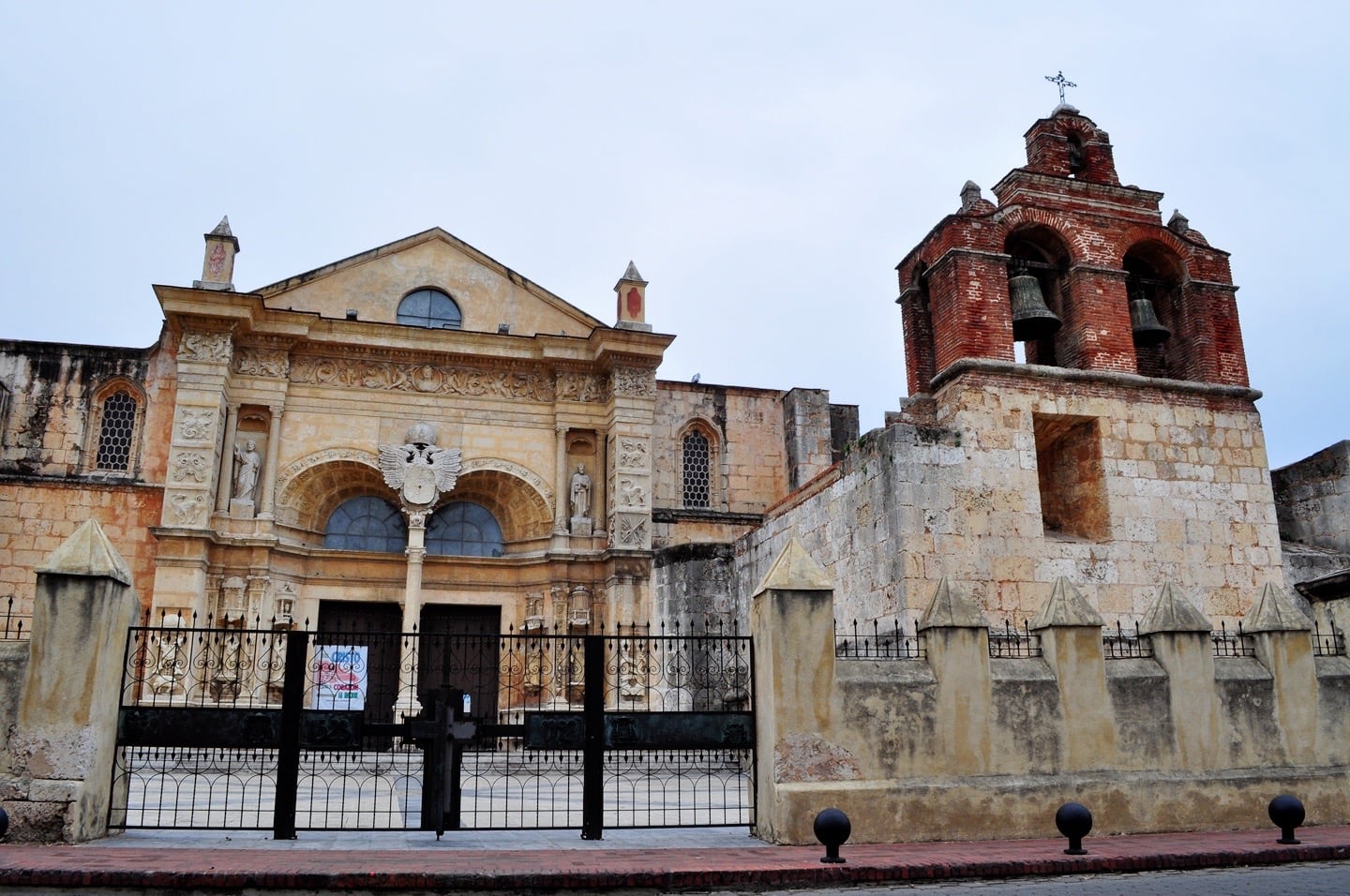 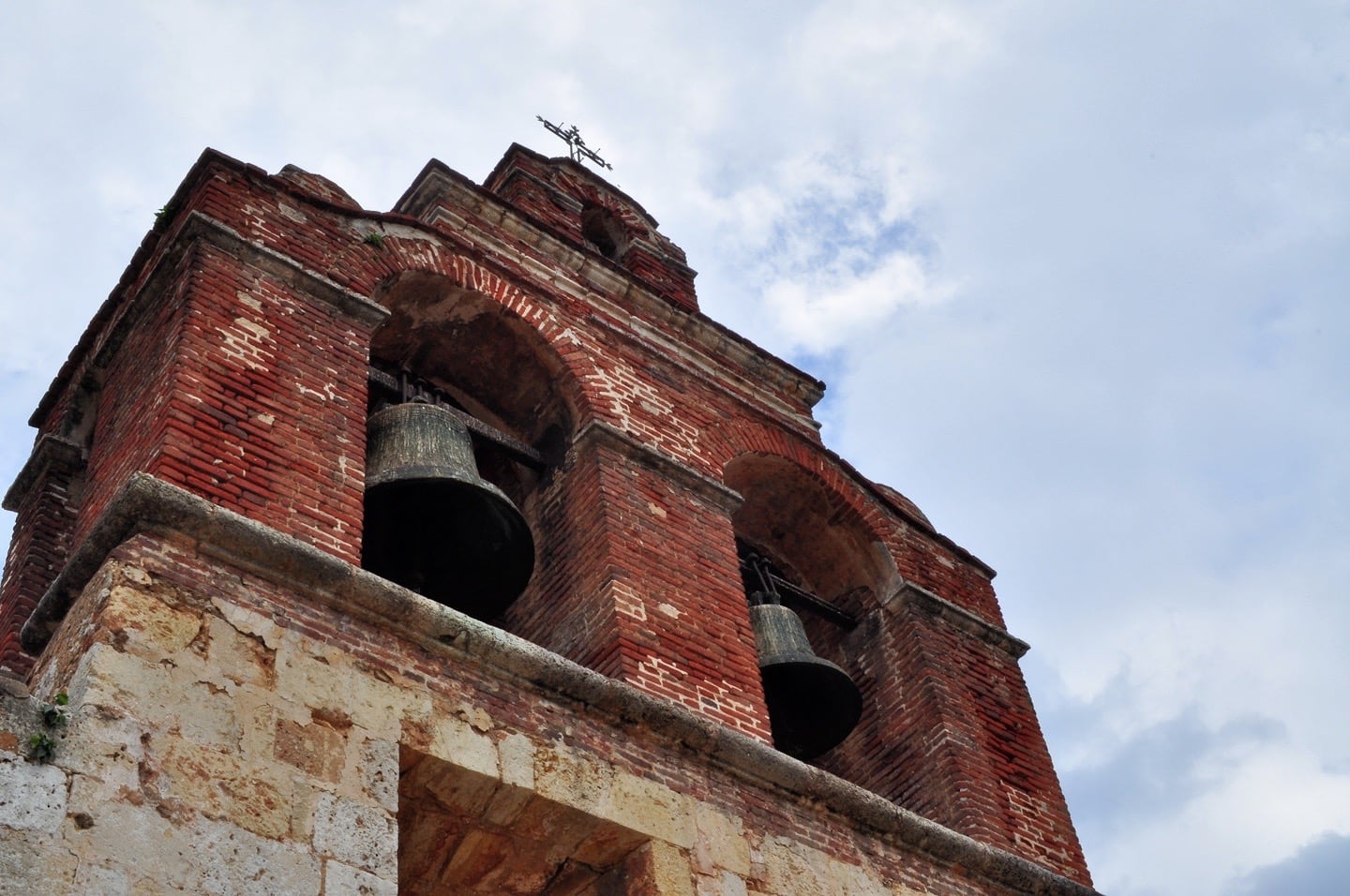 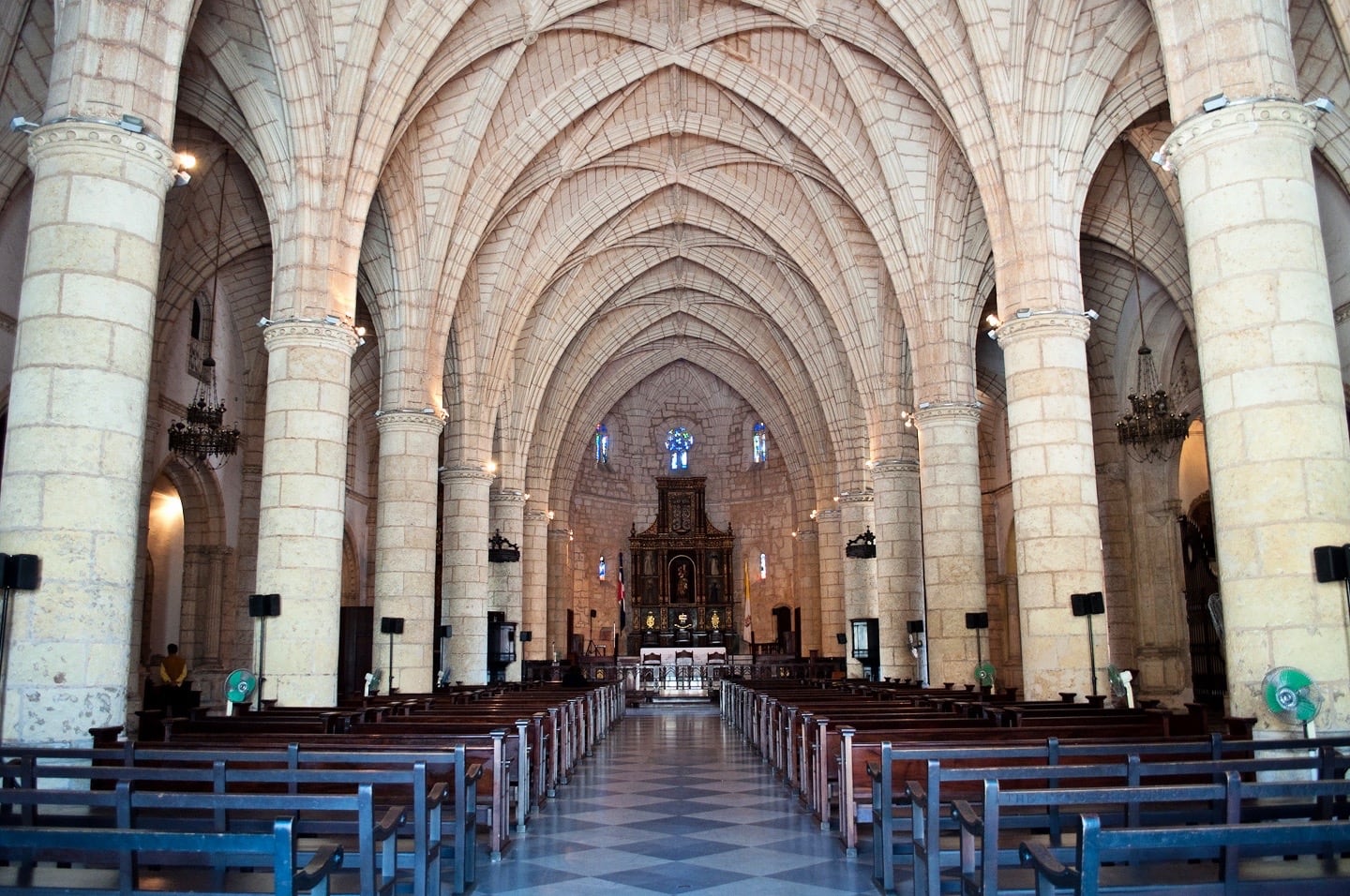 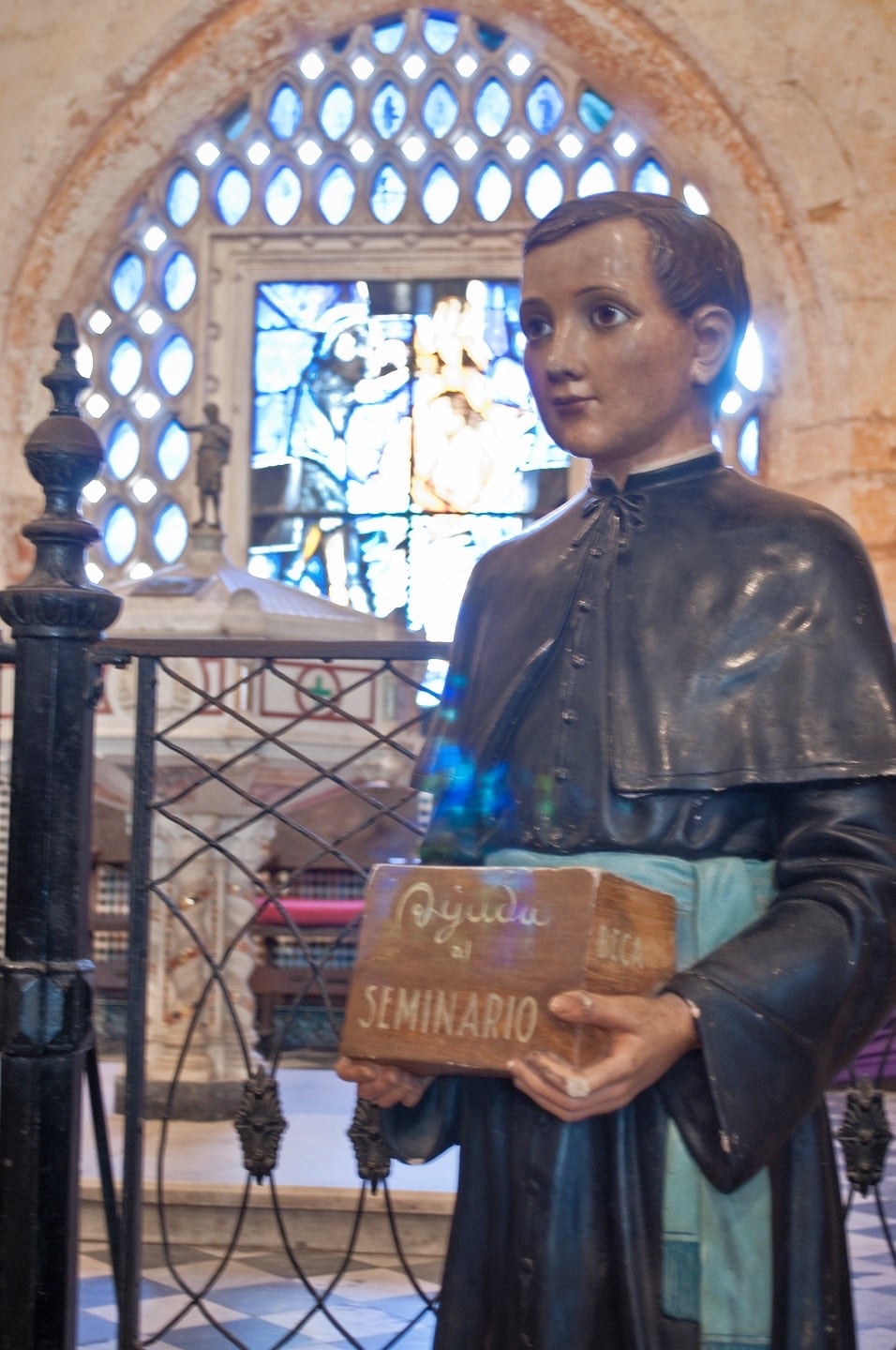 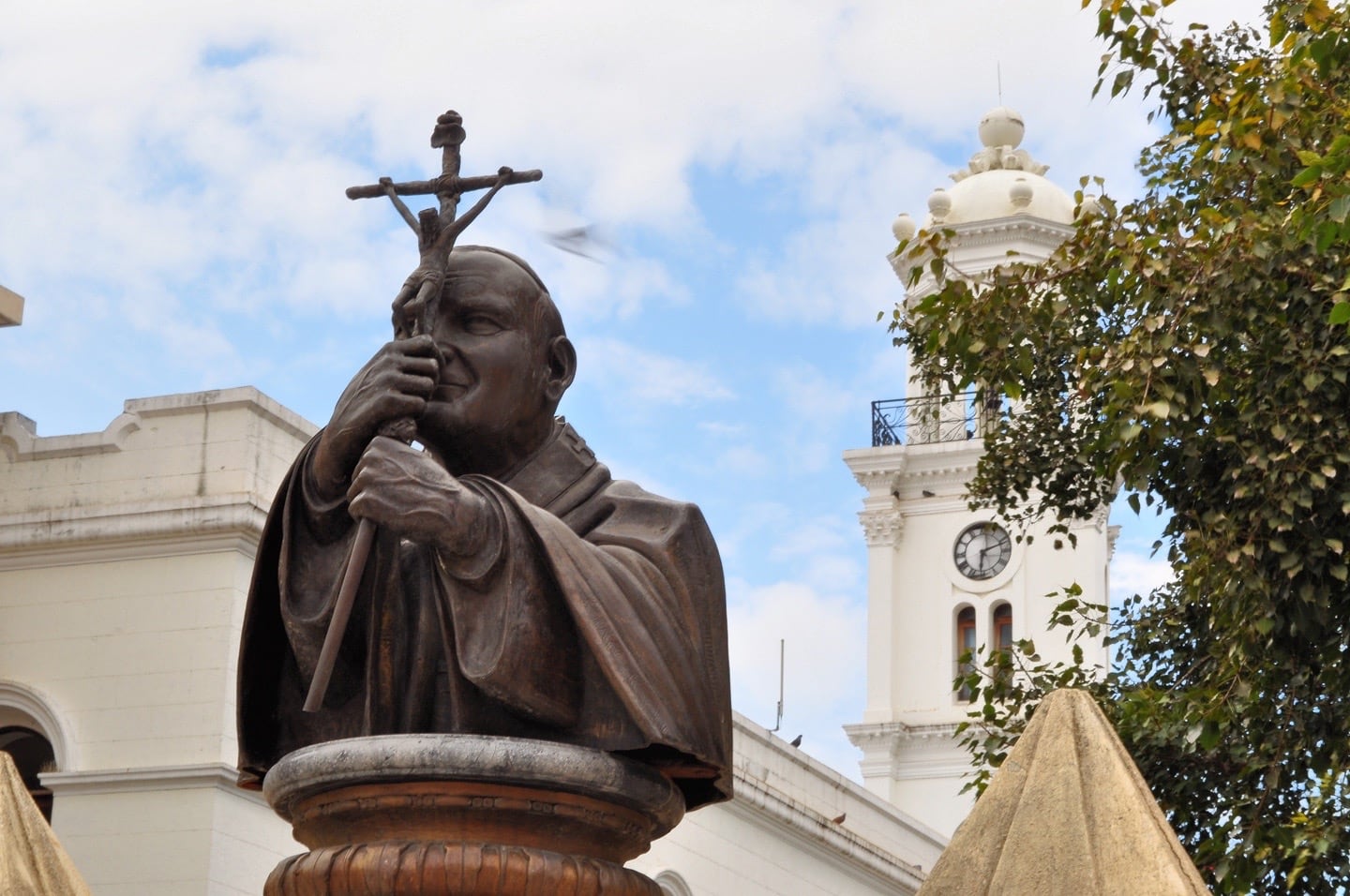 And who might this dapper young fellow be I wonder?

Around the cathedral grounds… 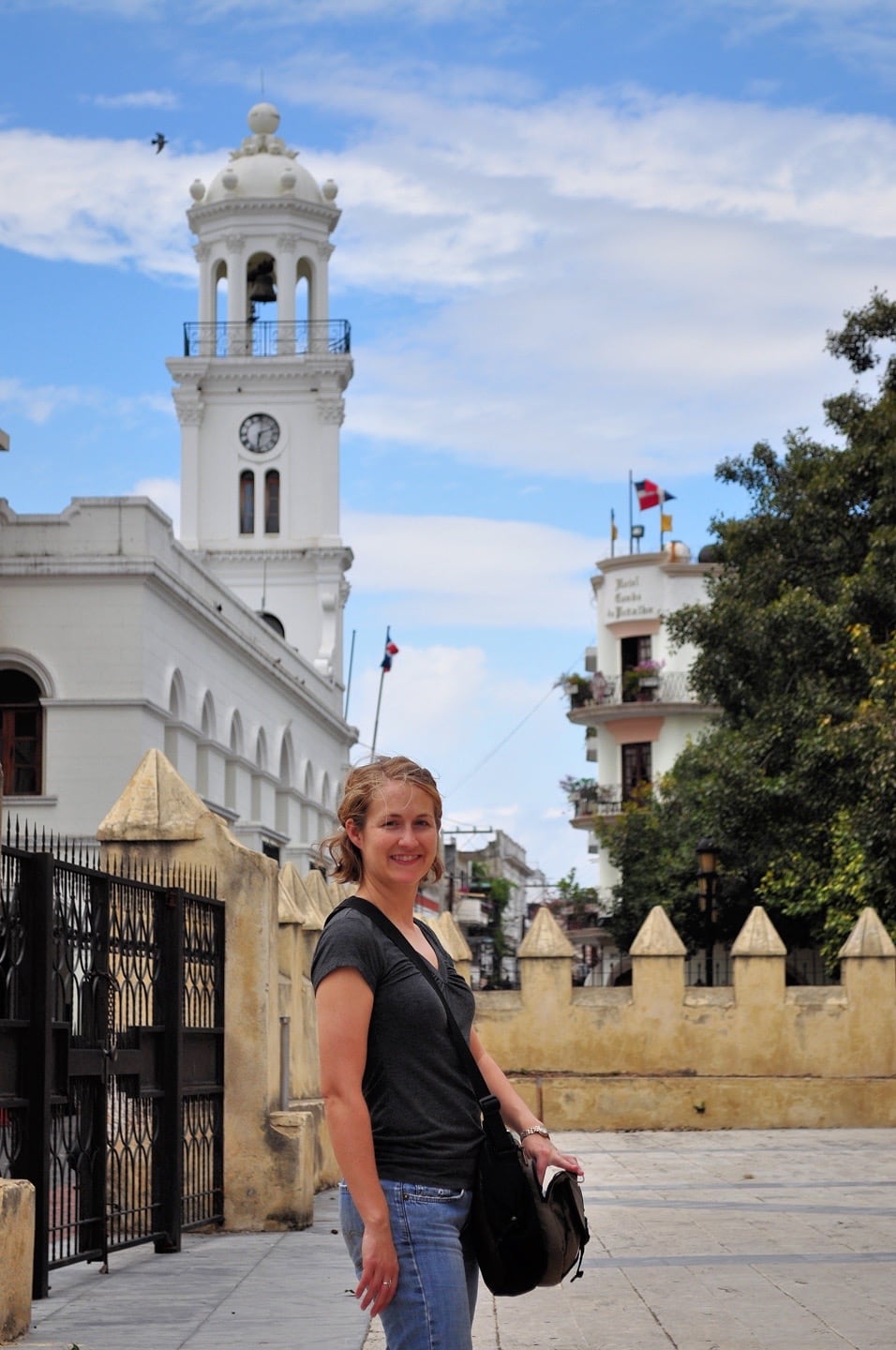 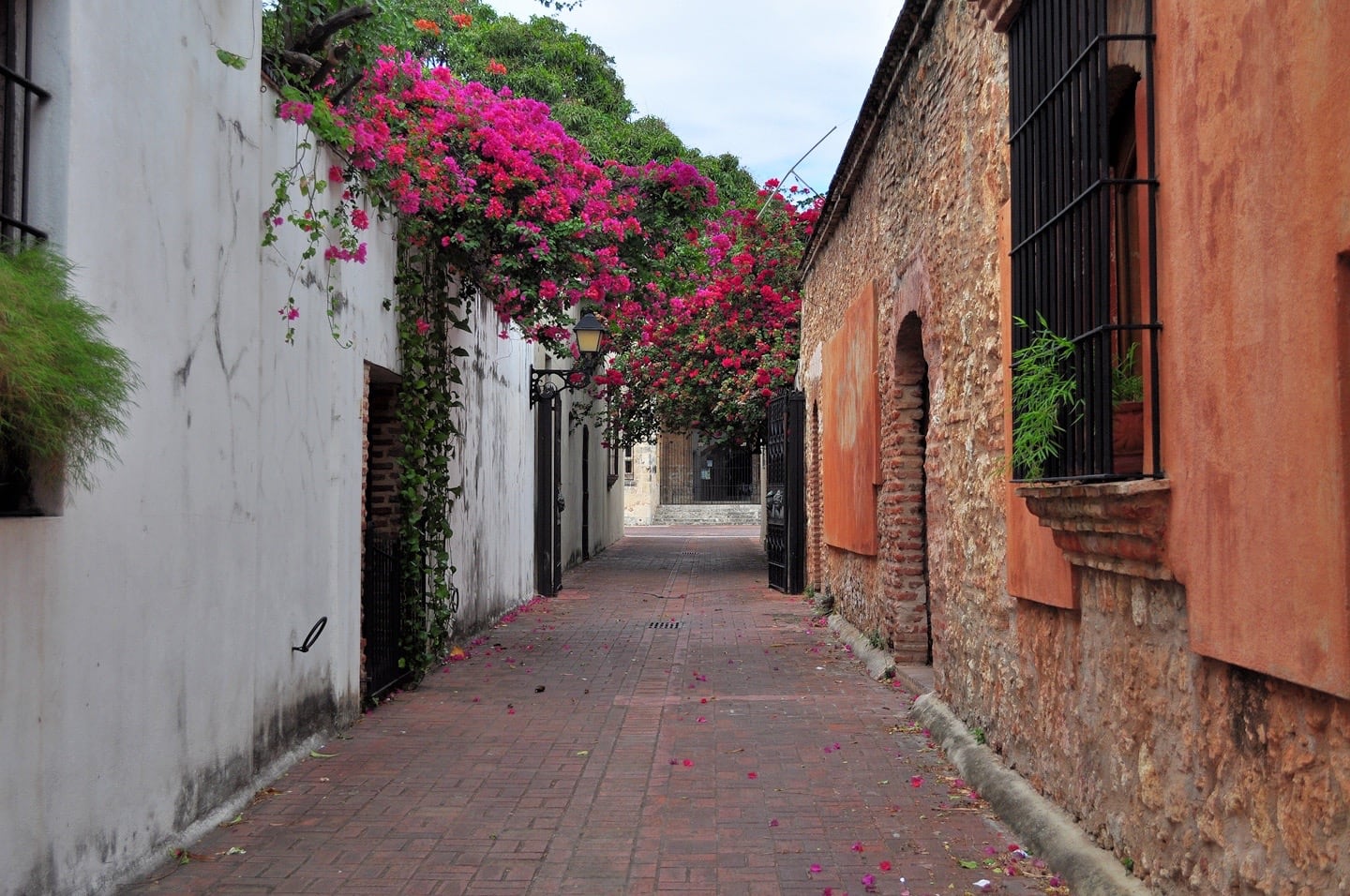 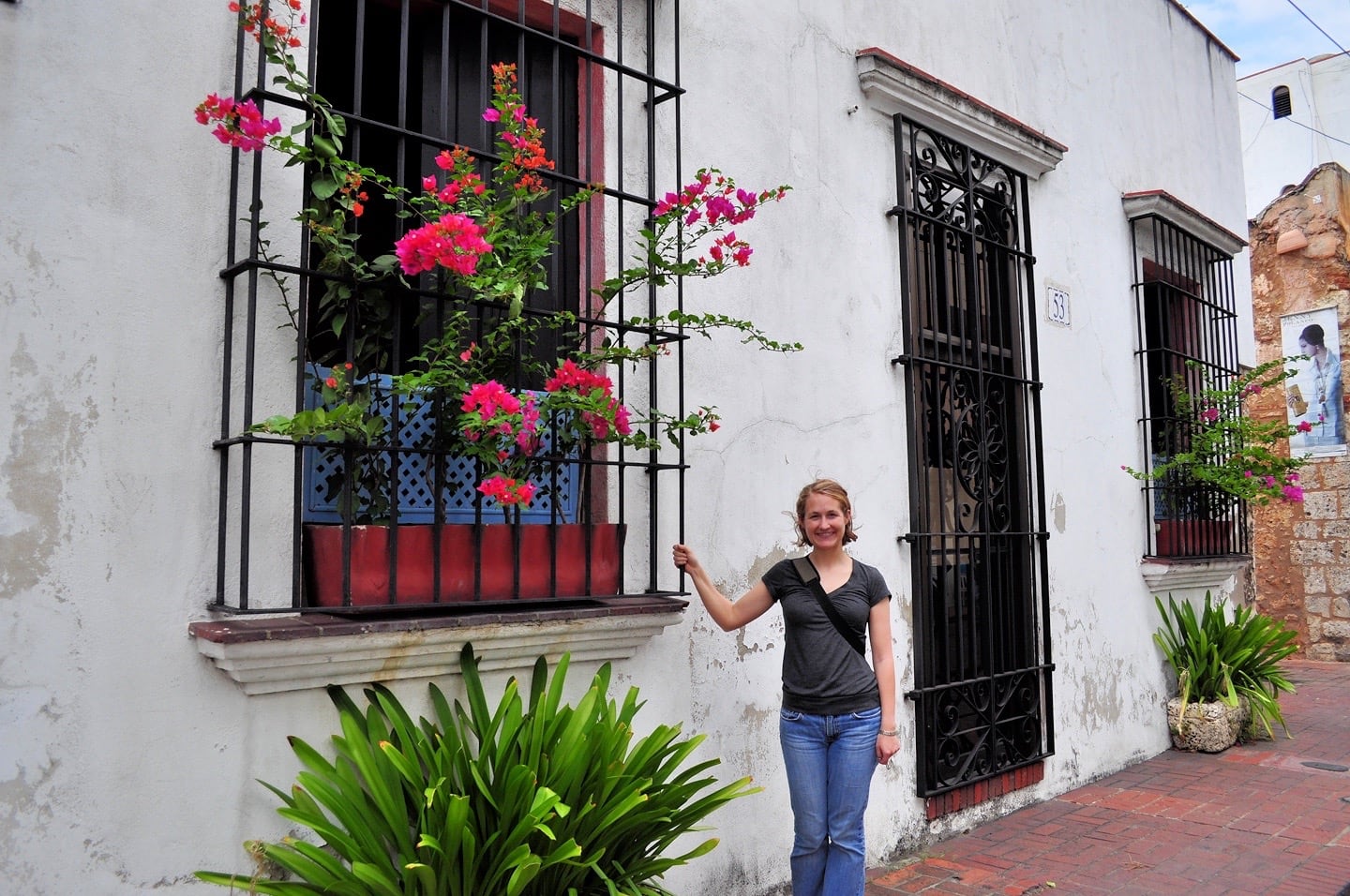 Christopher Columbus…pointing west to the New World…or the Hard Rock Cafe just across the street…it’s hard to tell. 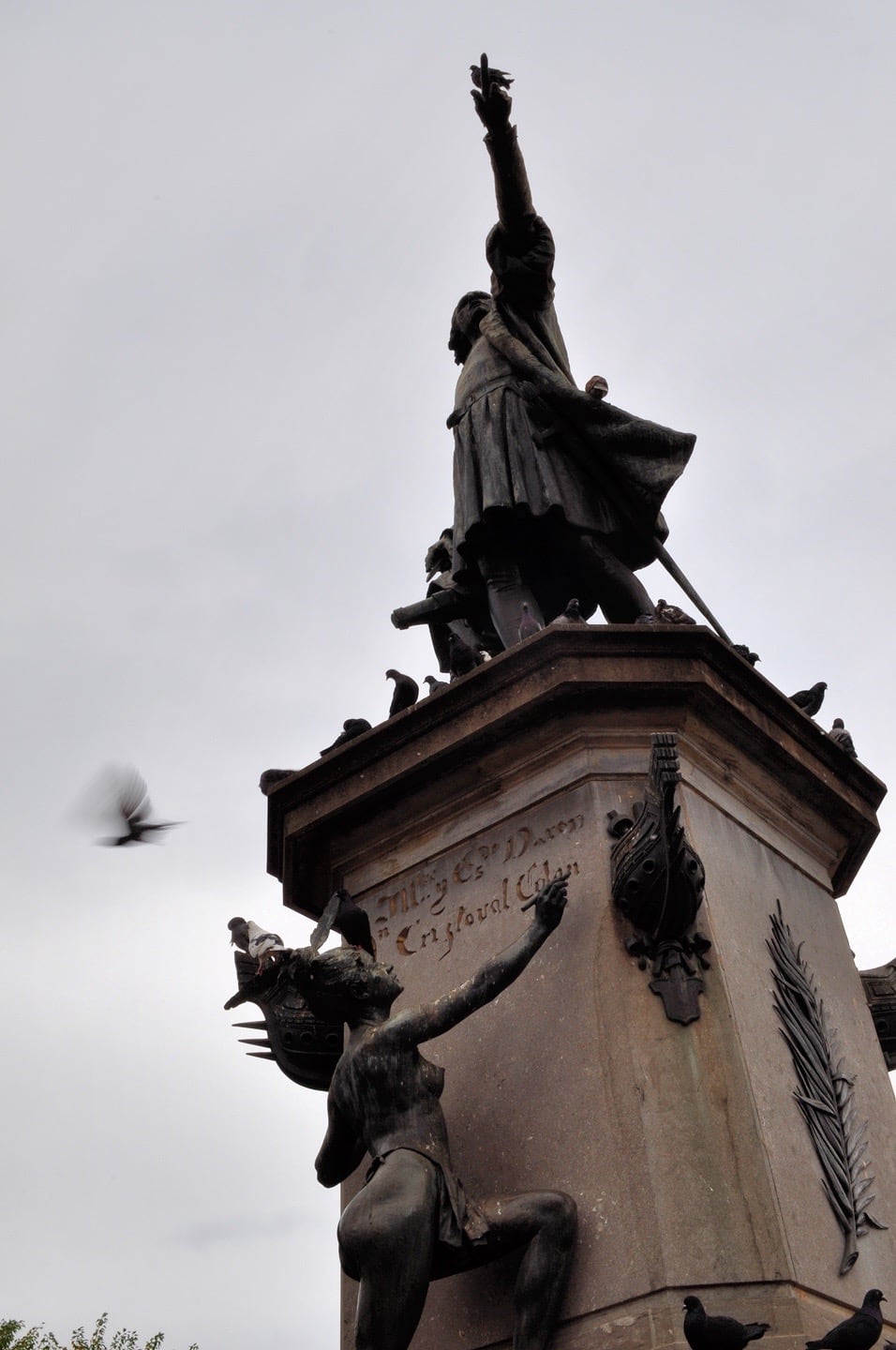 The night that we arrived in Santo Domingo it poured gatos y perros (“cats & dogs” for those who aren’t up on the obscure local dialect of this beautiful island nation). Given that Lori and I had just arrived in a new country and were terribly hungry, we ventured out into the monsoon. The only way we managed to keep some semblance of dry was by running down the streets from one recessed doorway to the next. This was one such street that saved our evening (below). 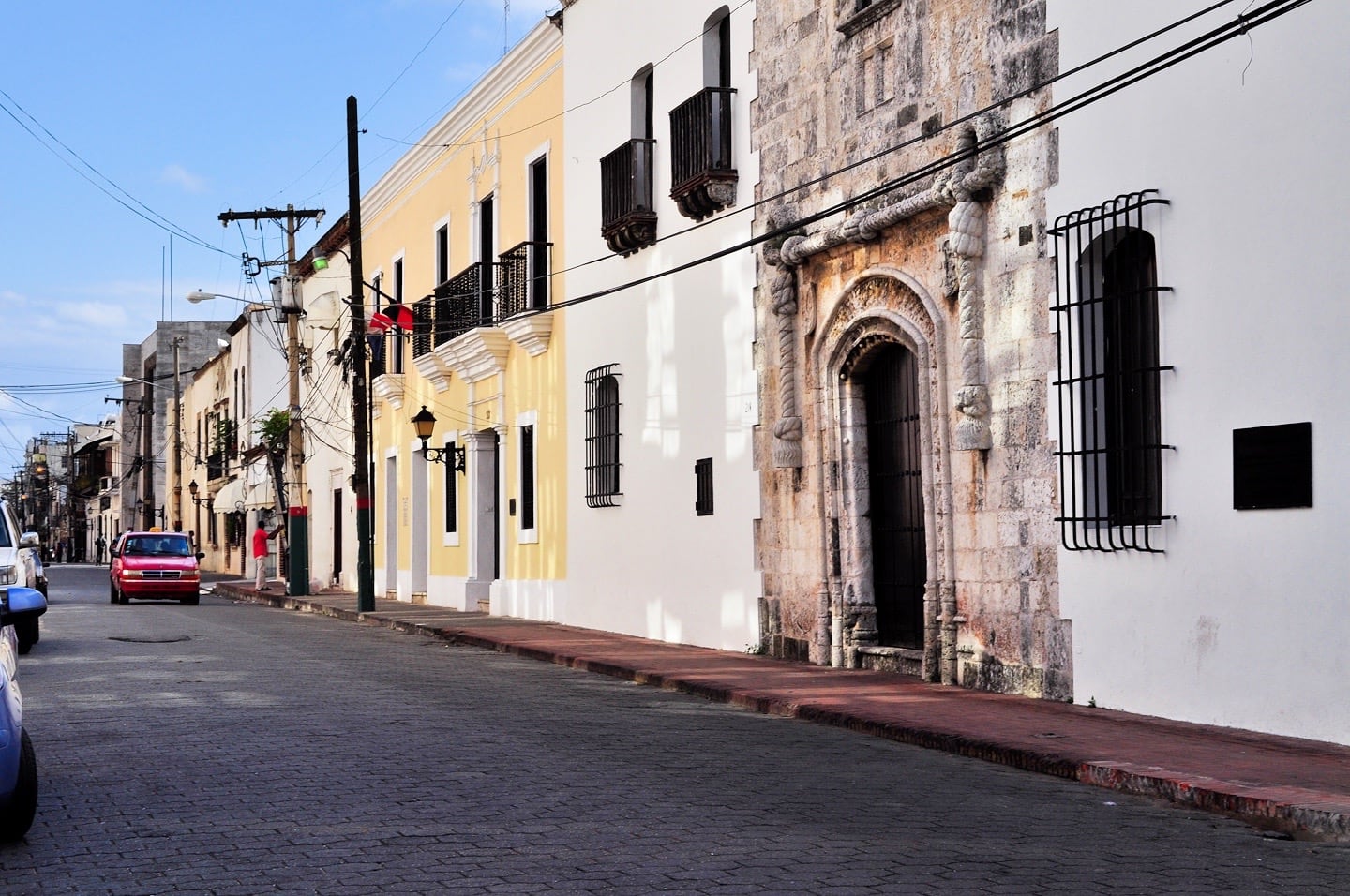 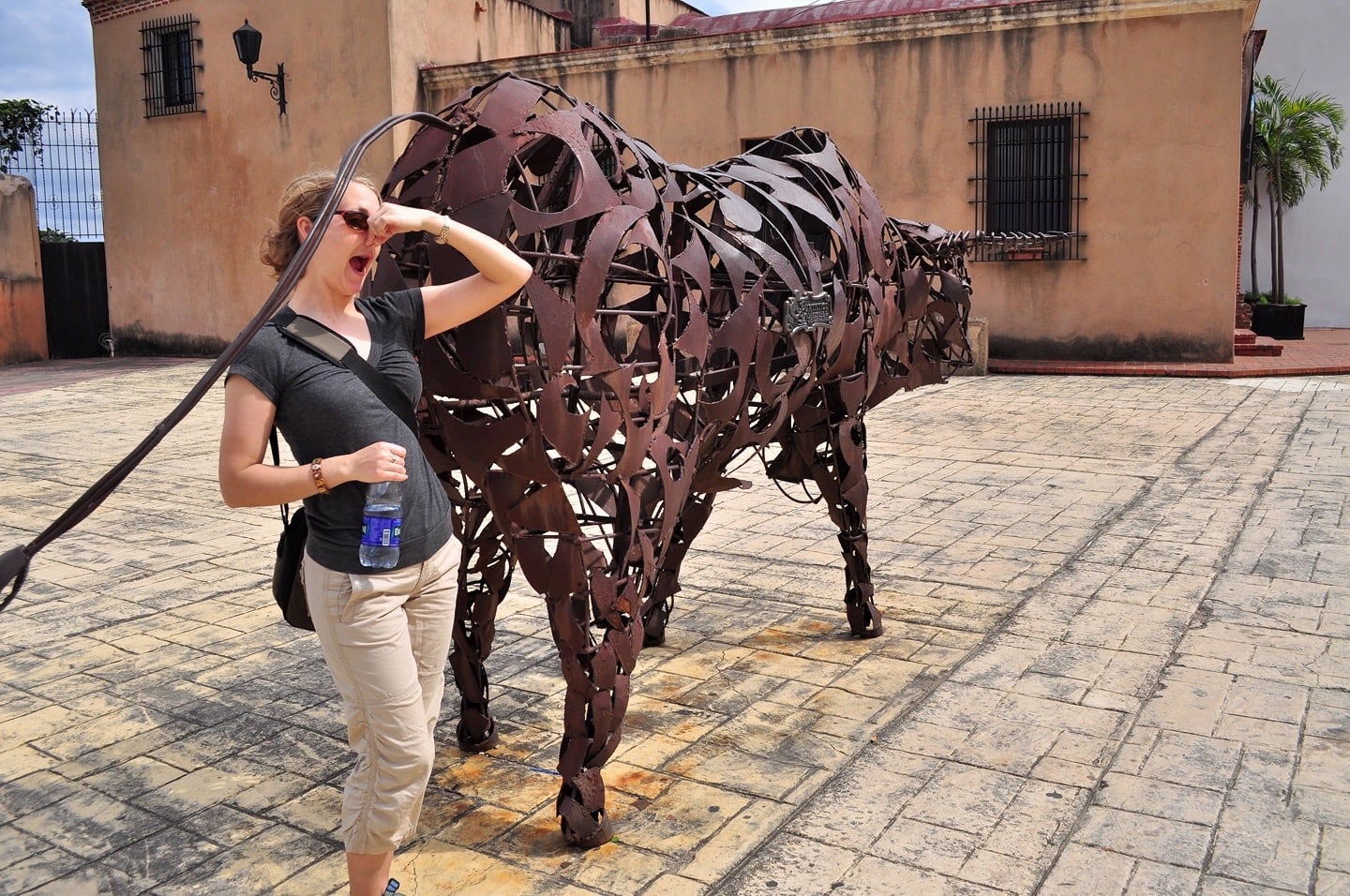 Lori braving the business-end of a Dominican street sculpture. 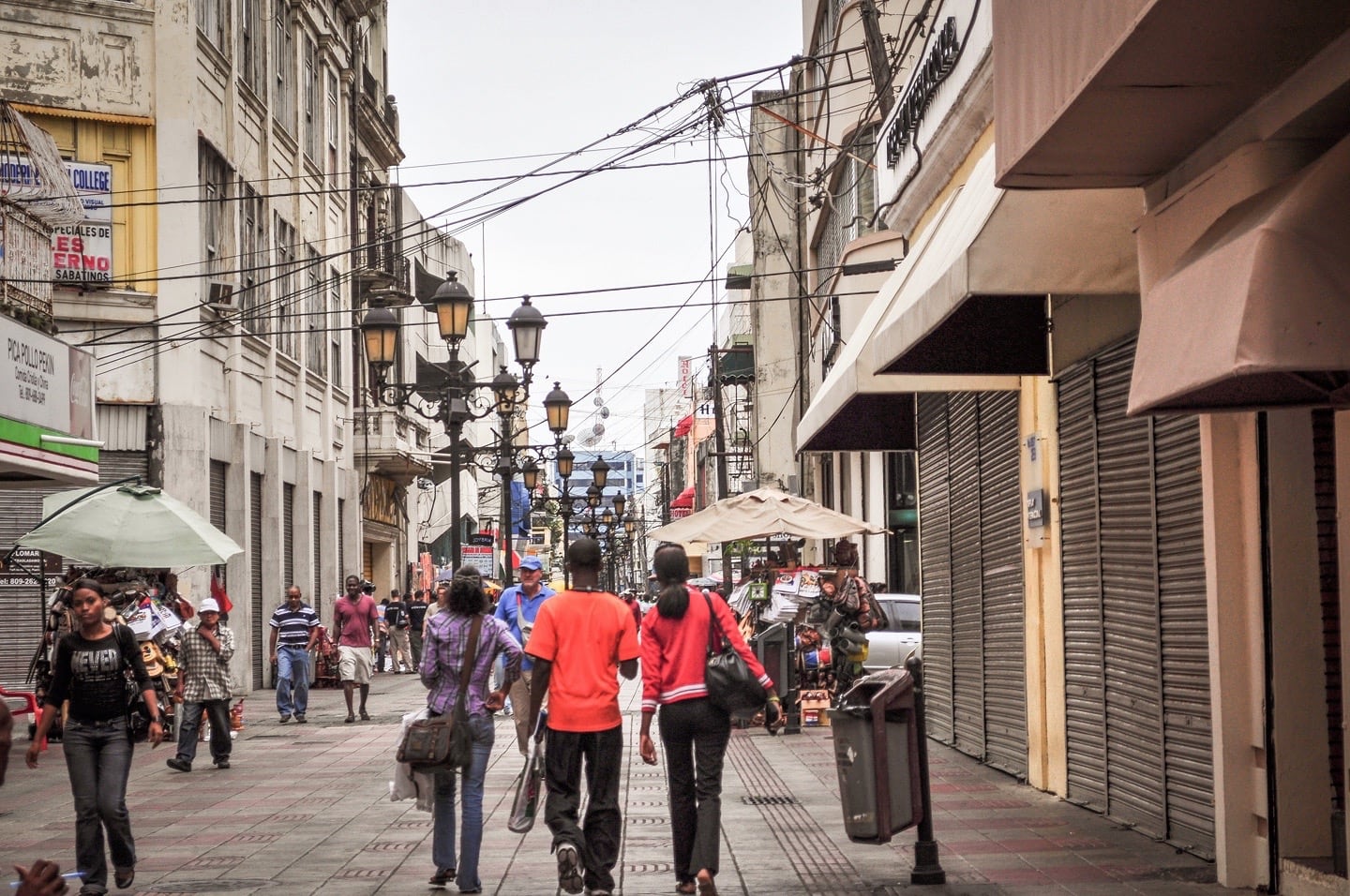 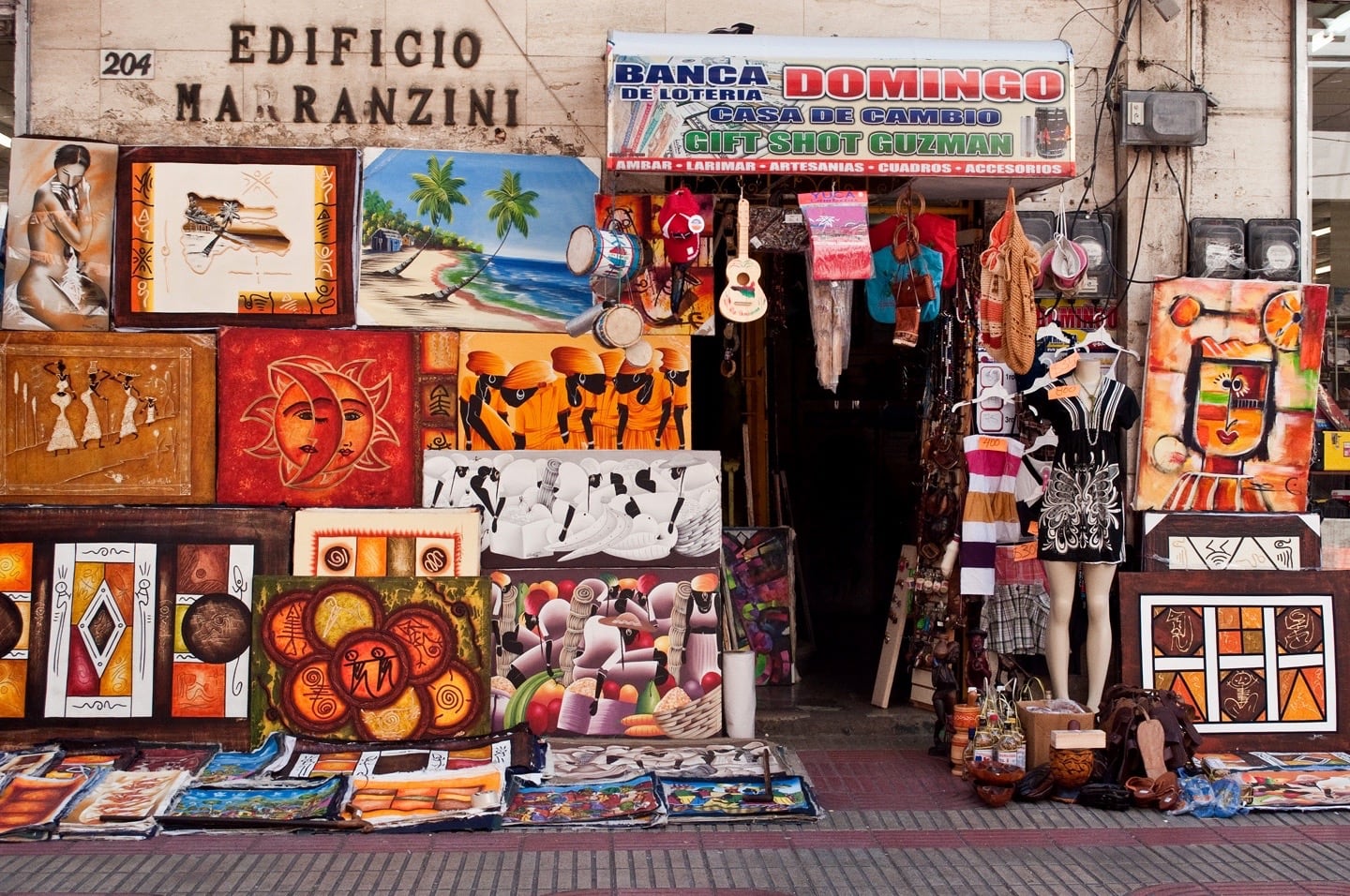 I would have probably bought a painting of a shop of paintings if they had had any. 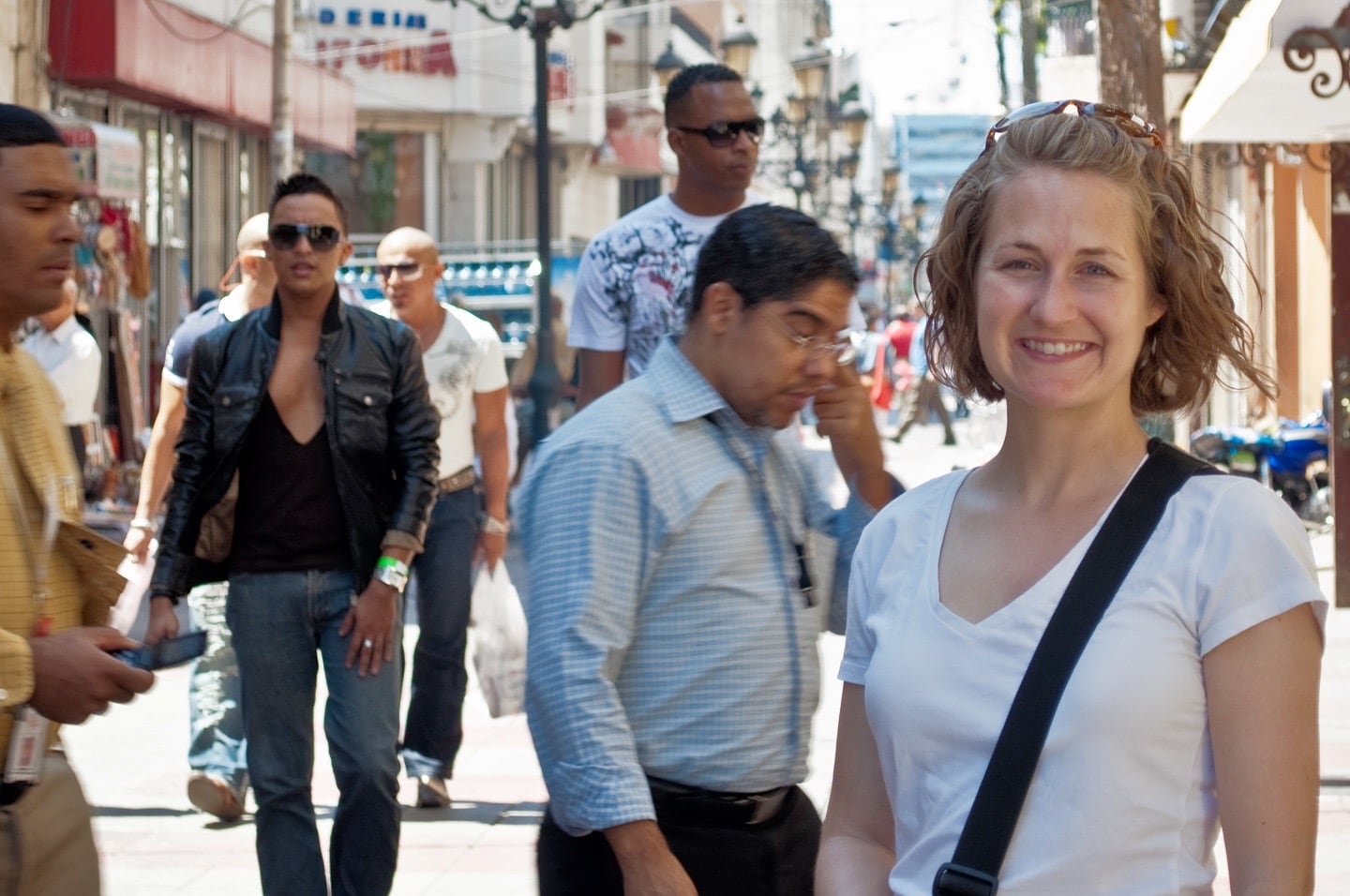 Inspired after taking the photo above, I immediately ran directly to the ultra-low V-neck t-shirt and tight leathers shop…but fortunately for Lori, it was closed. 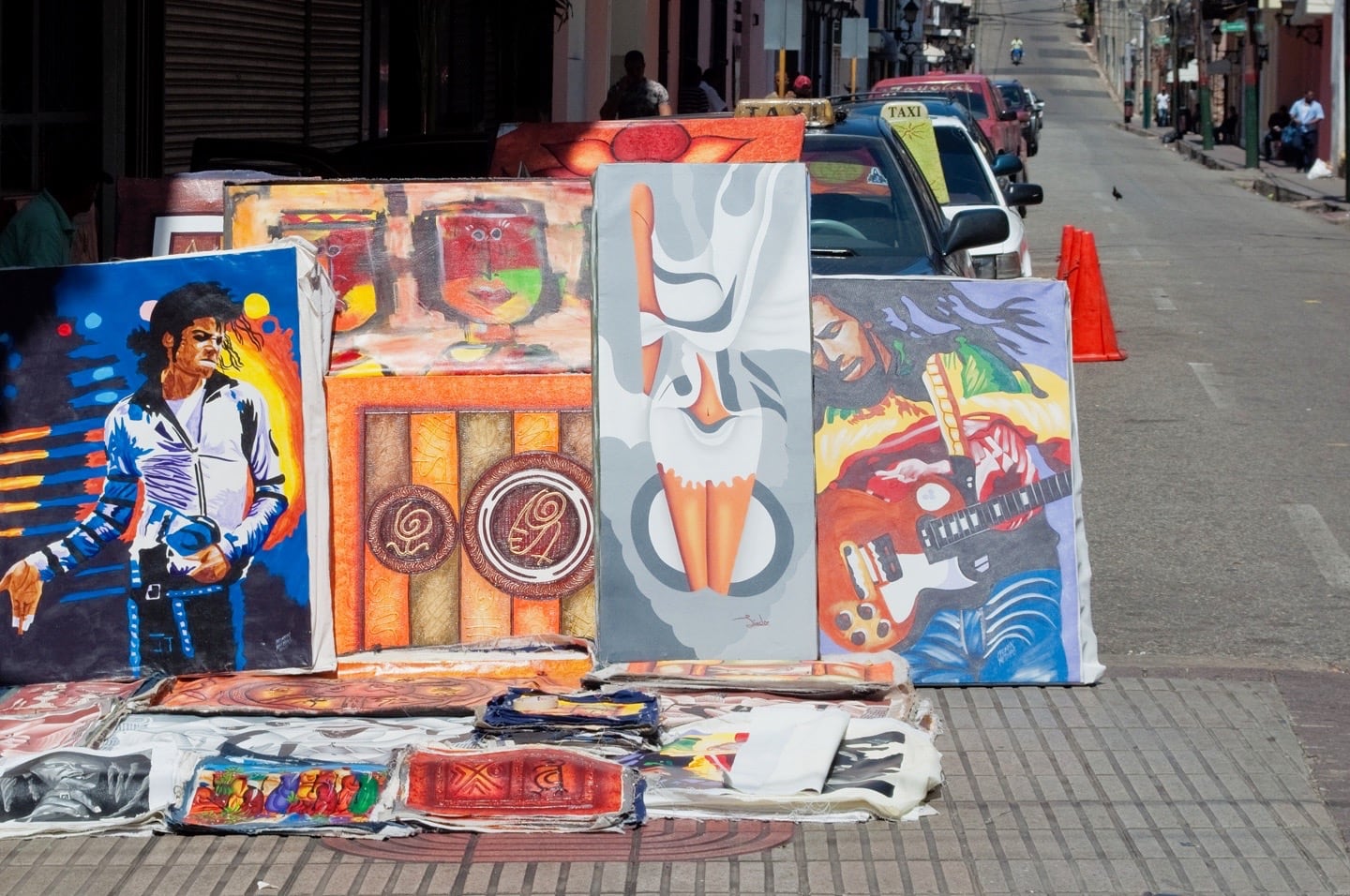 On the second floor of a building full of shops and offices on El Conde, there was a pleasant, but surprisingly un-air-conditioned internet cafe where the kind lady there was also able to burn my photos onto DVD (a minor miracle in my eyes considering it often took pooling the resources of three provinces and a witchdoctor to get a CD-ROM burned in Inhambane (Mozambique) just a few years prior…and that internet cafe was air-conditioned! But I digress…).And on the ground floor of that same building on Av. El Conde we found this neatly organized bookstore: 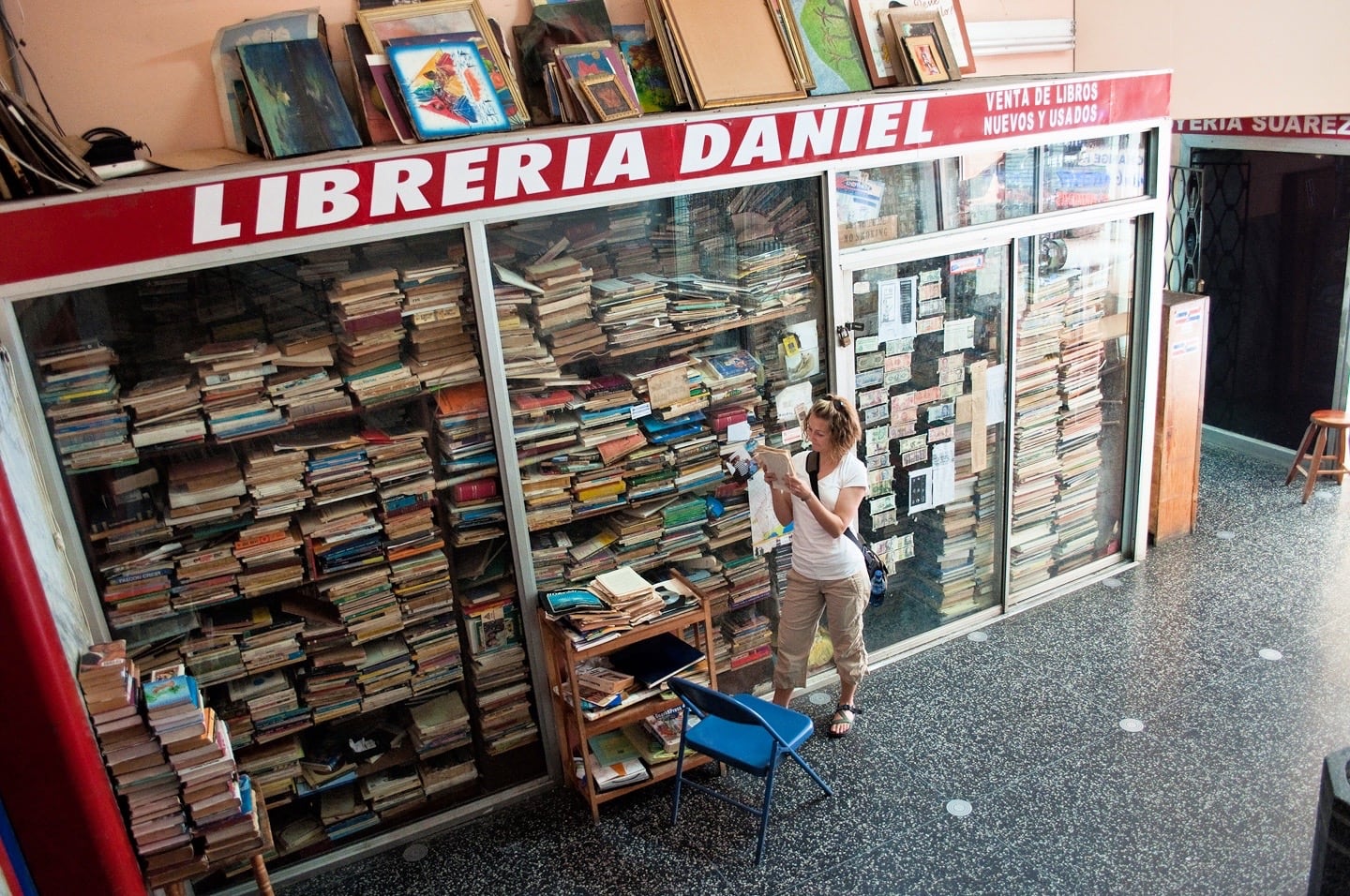 It was closed, to our dismay, but the proprietor had been nice enough to leave some samplers out front…or perhaps he simply ran out of room…At midday, we took a taxi to the bus station (Caribe Tours, of course) and headed off into the Interior to our next destination, Jarabacoa. But not before nearly missing our bus due to not being able to find an ATM that would take either of our debit cards.Word to the wise: When traveling in the DR, think of an ATM as a slot machine, as the odds of getting a payout are just about the same.