Xian and the Terracotta Warriors

Despite Xi’an being a virtually unrecognizable shadow of its former glorious self, it is nonetheless a modern and very agreeable city, not to mention host to a very old and famous subterranean army.

Despite Xian being a virtually unrecognizable shadow of its former glorious self, it is nonetheless a modern and very agreeable city which has a well-preserved ancient city wall and a couple of sizable towers in the center of town. If you’re looking to explore an ancient walled city, Xi’an can most certainly be a let down after visiting Pingyao. But if you take Xi’an city for what it is, a bustling and walkable city with all the modern amenities a foreign tourist’s heart could desire, excellent dining and lodging options, and a good bus system, then it is quite a bit more than just a stopover to see the Terracotta Warriors.

Read more about our honeymoon backpacking adventure around Asia. For an overview of the China portion, click here.

Yes, the Terracotta Warriors are old, very old (dating from 210-209 BC) and yes, there are quite a lot of them. Unfortunately, the Warriors suffer from two all-too-frequent 21st century maladies: over-hype and over-commercialism. Xian of course milks its proximity to the excavation site for all (and I do mean ALL) it’s worth. It may have been the amount of effort required to see the Warriors, or perhaps the sheer number of Chinese tourists out on a weekday to see them, or perhaps the mile-long gauntlet of relentless touts and tour guides, and nauseating super-commercialization of one of the greatest finds of modern archeology, but by the time we finally reached the Warriors, the thrill had been nearly zapped from us.

A quick bit about the Terracotta Warriors (AKA Terracotta Army). Qin Shi Huang, the first Qin emperor of China was one crazy dude, and the Warriors are just one example of that (but a pretty convincing one I believe). Before his death, Qin requested an army of thousands of life-size sculptures be buried with him, not only to protect him in the afterlife, but to ensure that the emperor continued to have subjects to rule over (what ever would he do with all that free time!?). Current estimates hover around 8,000 unique warriors along with some 150 chariots and 500 horses — These are estimates because only a fraction of the army has been unearthed and the entire site continues to be excavated to this day. The Army actually remained entombed for over 2,000 years until the 1970s when it was discovered by some local farmers digging a well.

There are three hangars covering the three primary excavation sites that make up the complex. Our guidebook suggested started with #3 (the smallest) and working our way to #1 (the largest and most impressive). It can be quite a task just figuring out which is #1, #2 and #3 as none of the hangars are clearly marked — made even more challenging by the fact that EVERYONE starts with #1. To do the hangars in reverse order means going against the flow of tourists, which in China can literally mean DEATH.

But through sheer perseverance we made it happen, and I can safely say it’s well worth the effort. After seeing #1, everything else is peanuts in comparison. But #2 & #3 are worth seeing given that they allow you to get closer to the action, see a couple of warriors up close and also because they offer not just warrior figures but horses, chariots and other creations. #1 is simply a sea of life-size figures.

Something also worth noting is that the complex is an active excavation site and we were able to watch a bit of the mind numbingly slow action happen right before our eyes in hangar #1, where they seem to be unearthing more body parts than entire figures these days, but piecing these mismatched body parts together to form a separate army of Frankenstein-esque figures in the rear of the hangar. 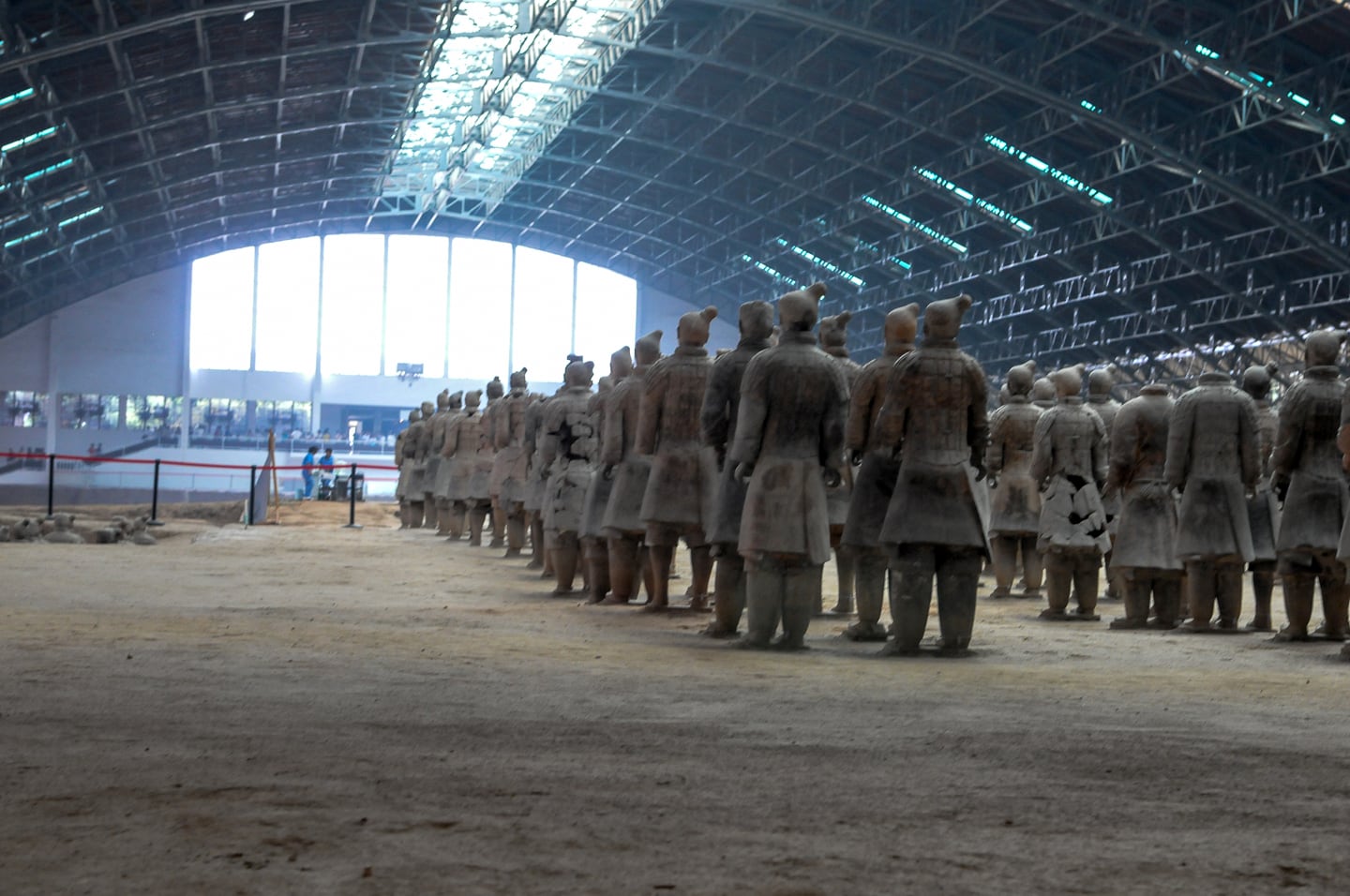 Given that Lori are suckers for doing these sorts of things on the cheap, we opted for taking the public bus from the central railway station just outside the northwest gate of the city. It made 3-4 stops, took a little over an hour and cost US$1.10 per person each way! The only catch was that there was quite a line for the return bus and we had to wait about 45 minutes to get on one.

Back in Xi’an, we ate dinner that night at a kabob place in the Muslim Quarter. The Muslim Quarter is definitely worth a visit, but don’t go expecting Little Arabia. Most “Muslim Quarters” in China are populated by Hui and Uyghur people (among other minority ethnic groups) who have distinct cultures and customs all their own.

The restaurant was excellent, and I wish I could pass on the name — however the name written on the restaurant was in Chinese characters. We asked the woman in charge but couldn’t possibly reproduce her response in English. I can tell you this: Walking down the main street from south to north, it’ll be the only place on your left making fresh mouthwatering flat bread and kabobs in front of a brightly-lit restaurant packed with people. The rear of the restaurant is lined with glass-door refrigerators containing every veggie known to man, and every table has a wok where you cook your veggies. That should be enough to positively ID the place. Get the mutton kabobs, flatbread, some leafy greens, and the orange soda that everyone else is drinking. The whole meal for two will cost you under $5 and you won’t regret it.

Due to severe flooding in Sichuan Province, train unavailability and time constraints, we opted to fly from Xi’an to Kunming on a cheap ticket with Hainan Airlines (which, by the way, is FANTASTIC).

Here are some random pics from the airport that we thought you might enjoy: 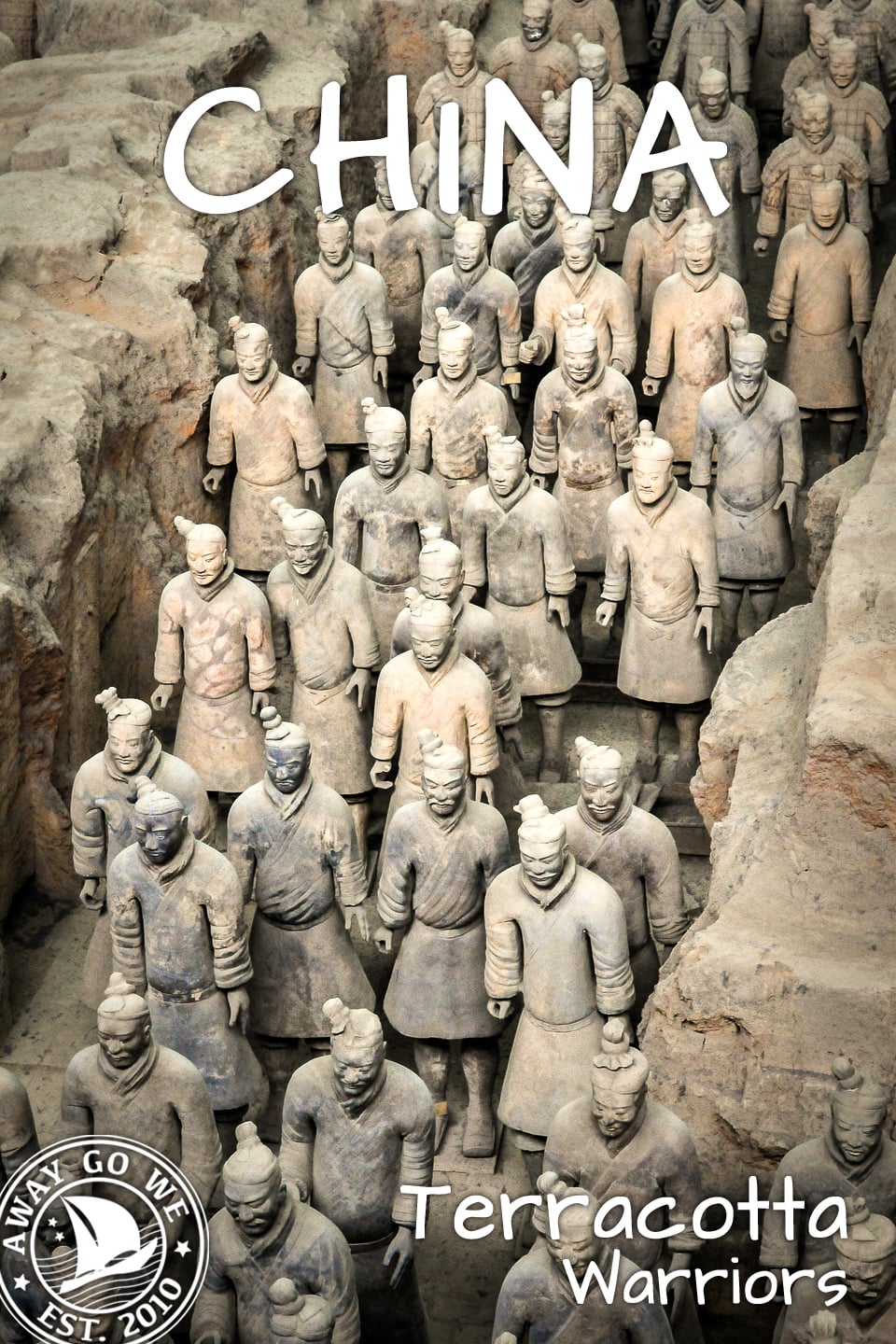 Thank you for adding another chapter to my knowledge of China