Sunrise as viewed from the summit of Taishan is the undisputed main event atop the mountain, even if you never actually see the sun through the “haze.”

On our first day on the mountain, we ascended 5,000 ft. and 6,600 individual steps. After a restful night atop the mountain, we awake a little after 4am for sunrise before starting the long and arduous task of coming down. 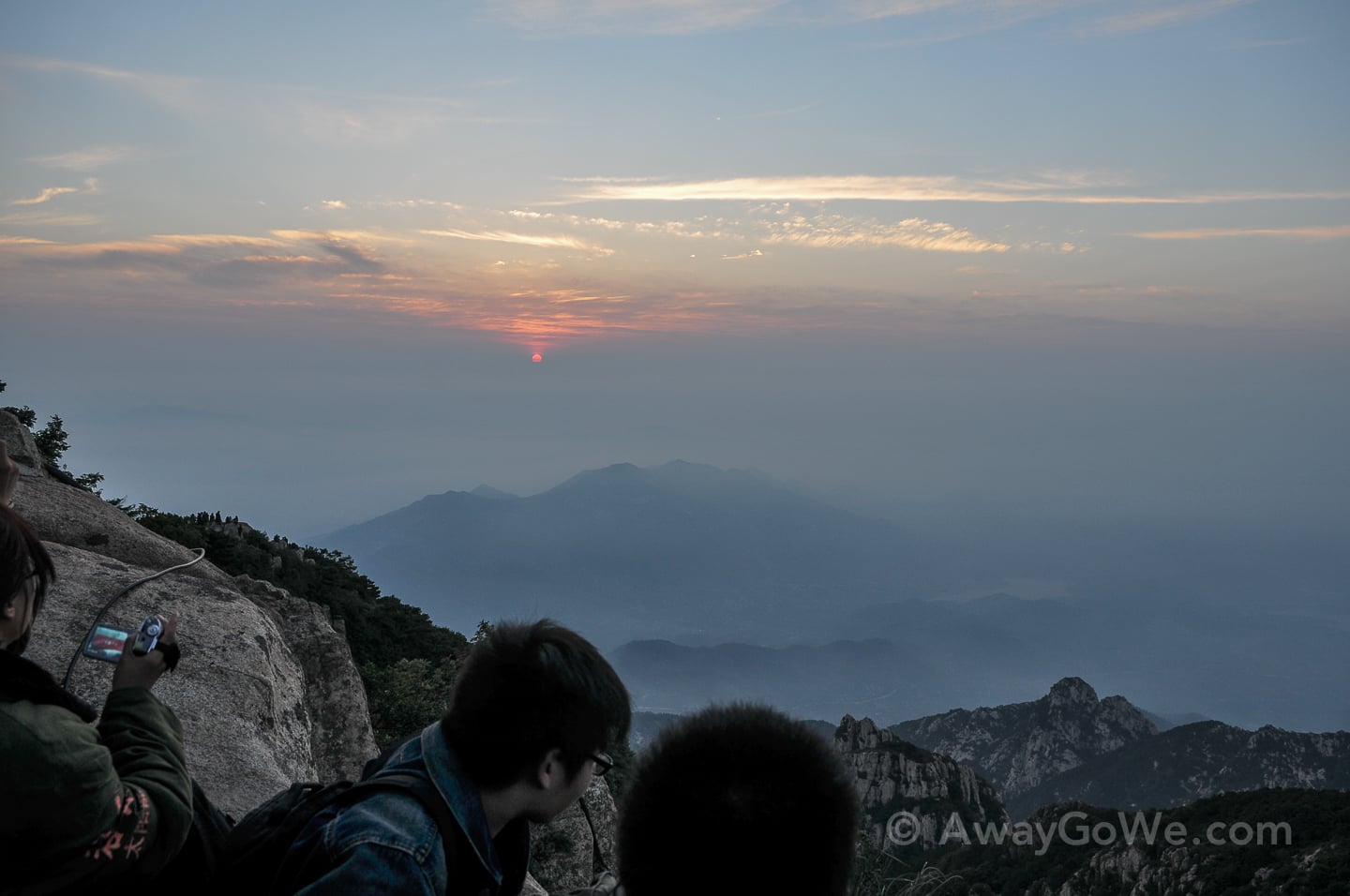 Sunrise as viewed from the summit of Taishan is the undisputed main event atop the mountain. Many climbers ascend through the night to witness the spectacle from the aptly “Sun Viewing Peak.” Others (like us) stay the night atop the mountain. It’s such a big event that staff at our hotel came through at 4am to wake guests with a knock on the door and a couple of words.

Sunrise is EARLY in summer (4:47am on 7 July), but a can’t-miss experience. On this particular morning, a thick haze delayed the emergence of the sun into view, muting the impact substantially. While one can certainly imagine how brilliant and magnificent the sunrise would be on a crisp, autumn morning, the view (and more importantly, the experience) was well worth the early rise. Being able to share an experience that is so quintessentially Chinese with hundreds of Chinese people in China is perhaps more rewarding than the view, though the view of the sun rising from high atop Mt. Tai was nothing to sneeze at either. 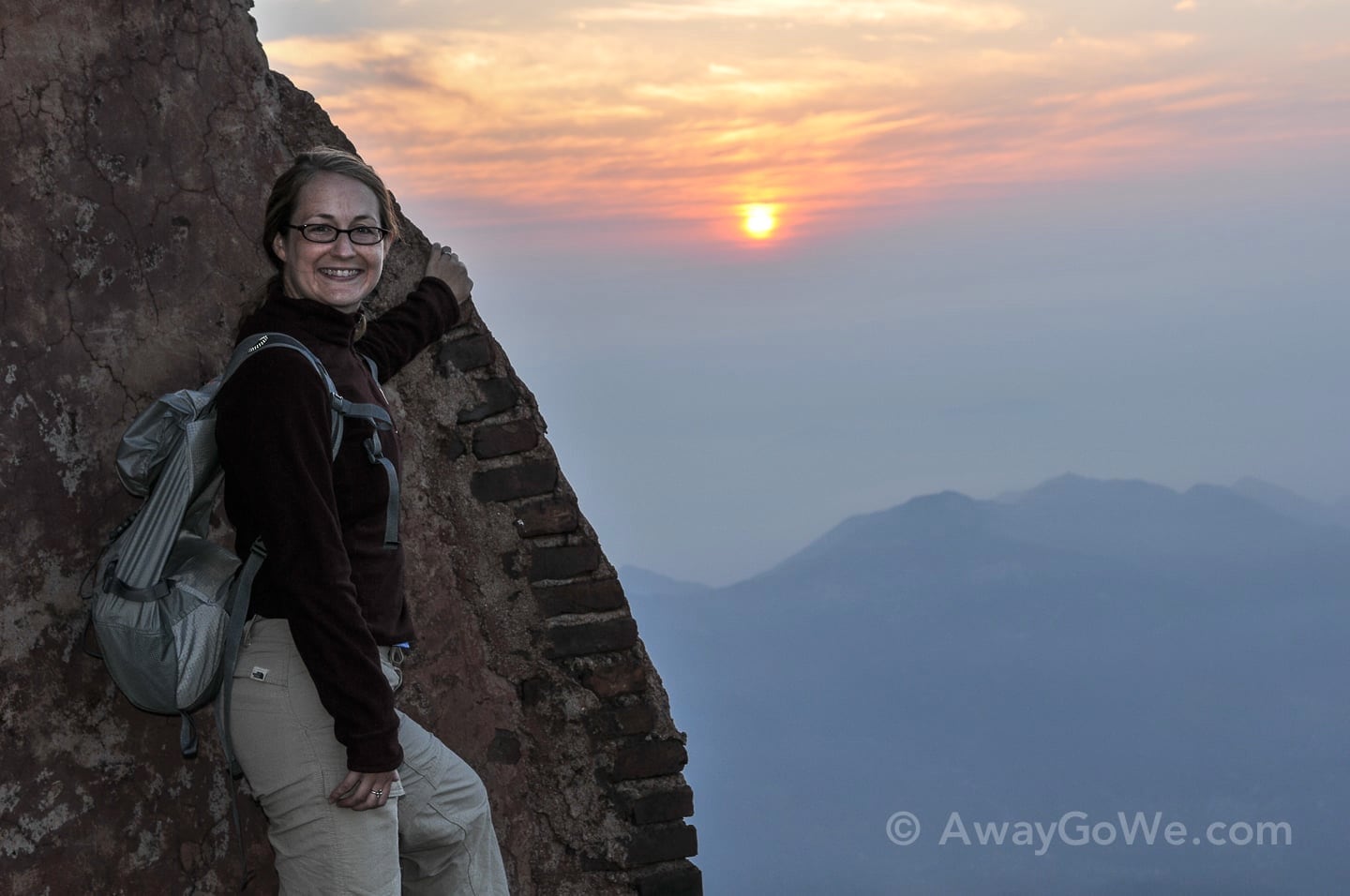 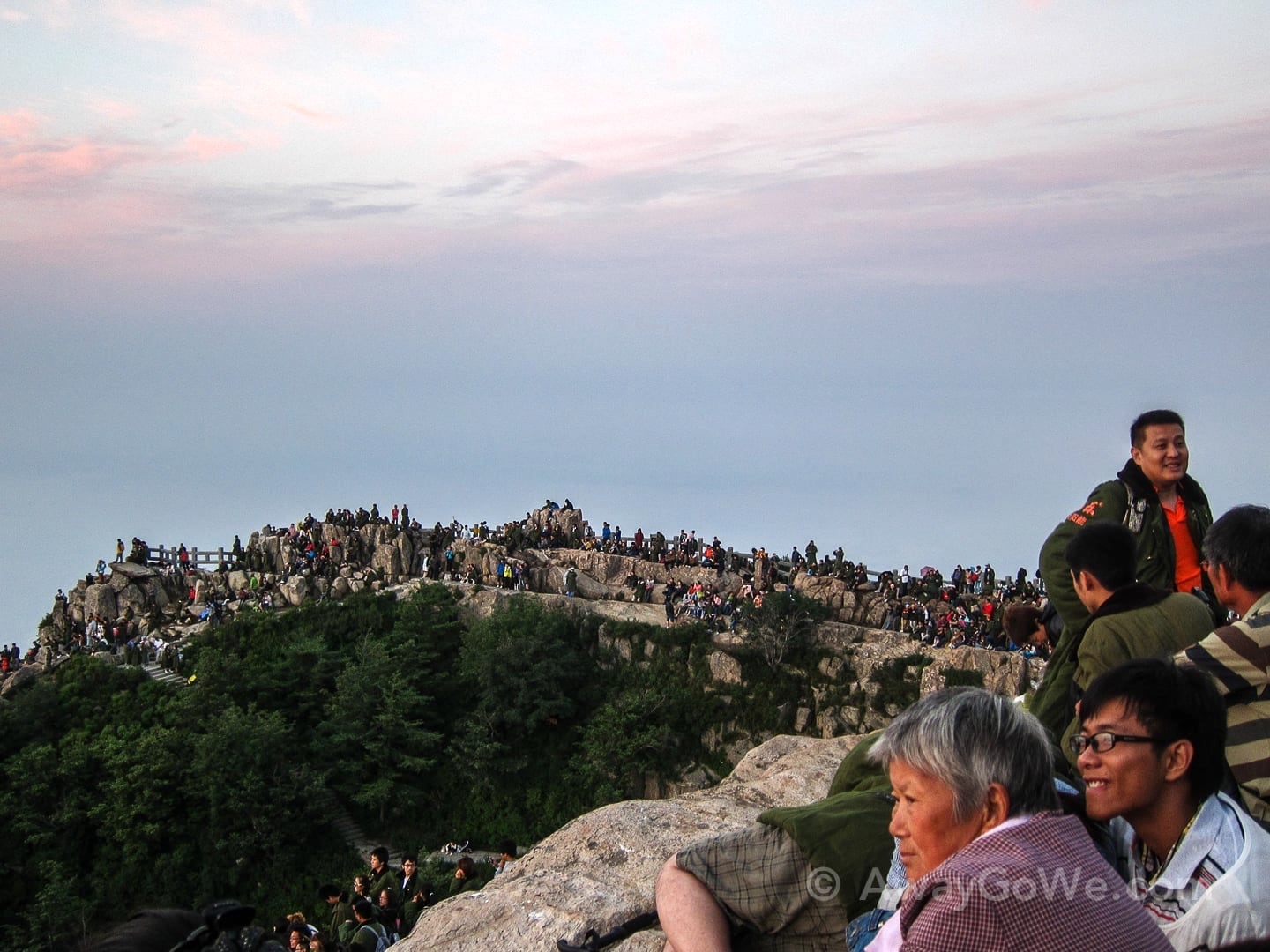 …with a few hundred of our closest Chinese friends. 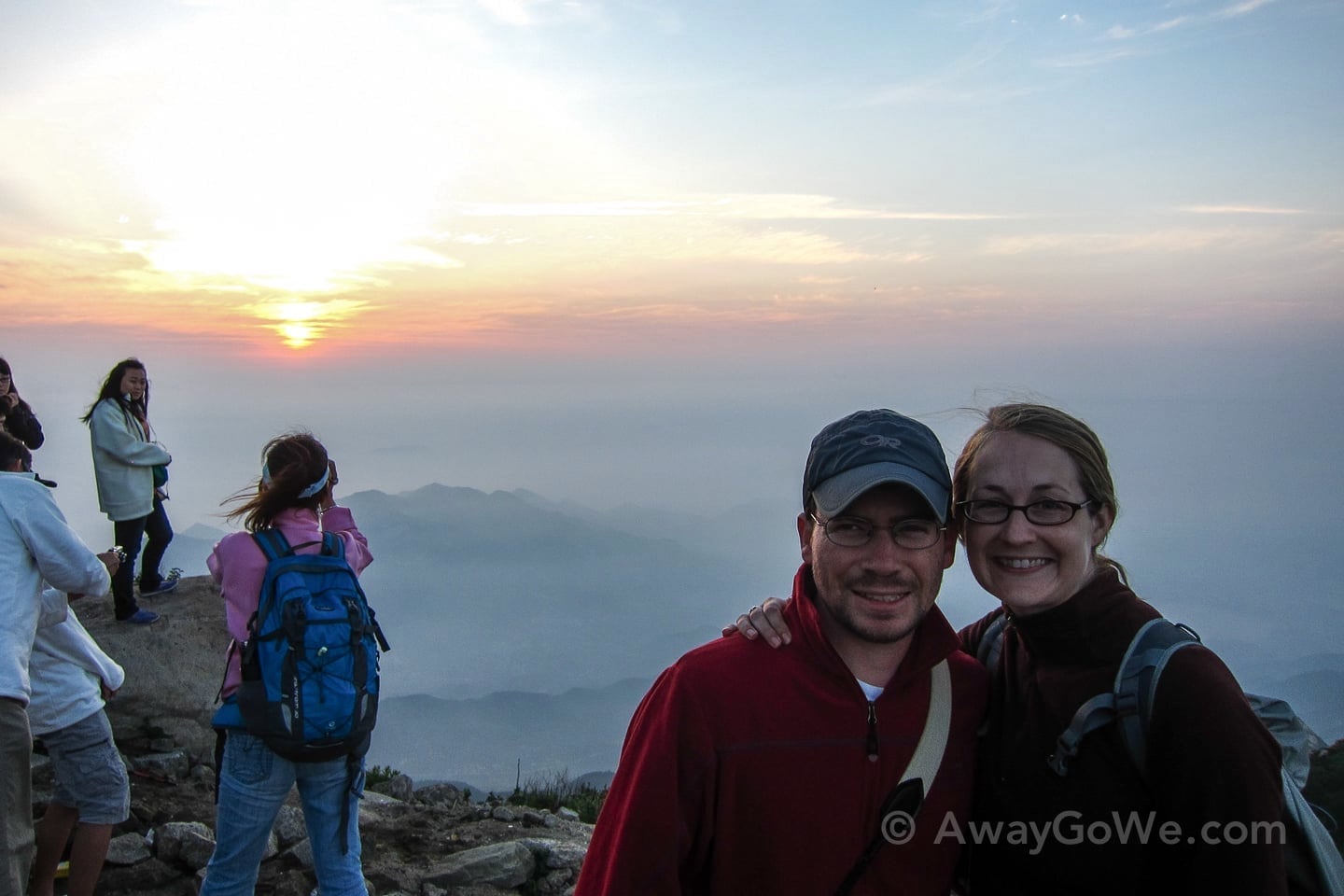 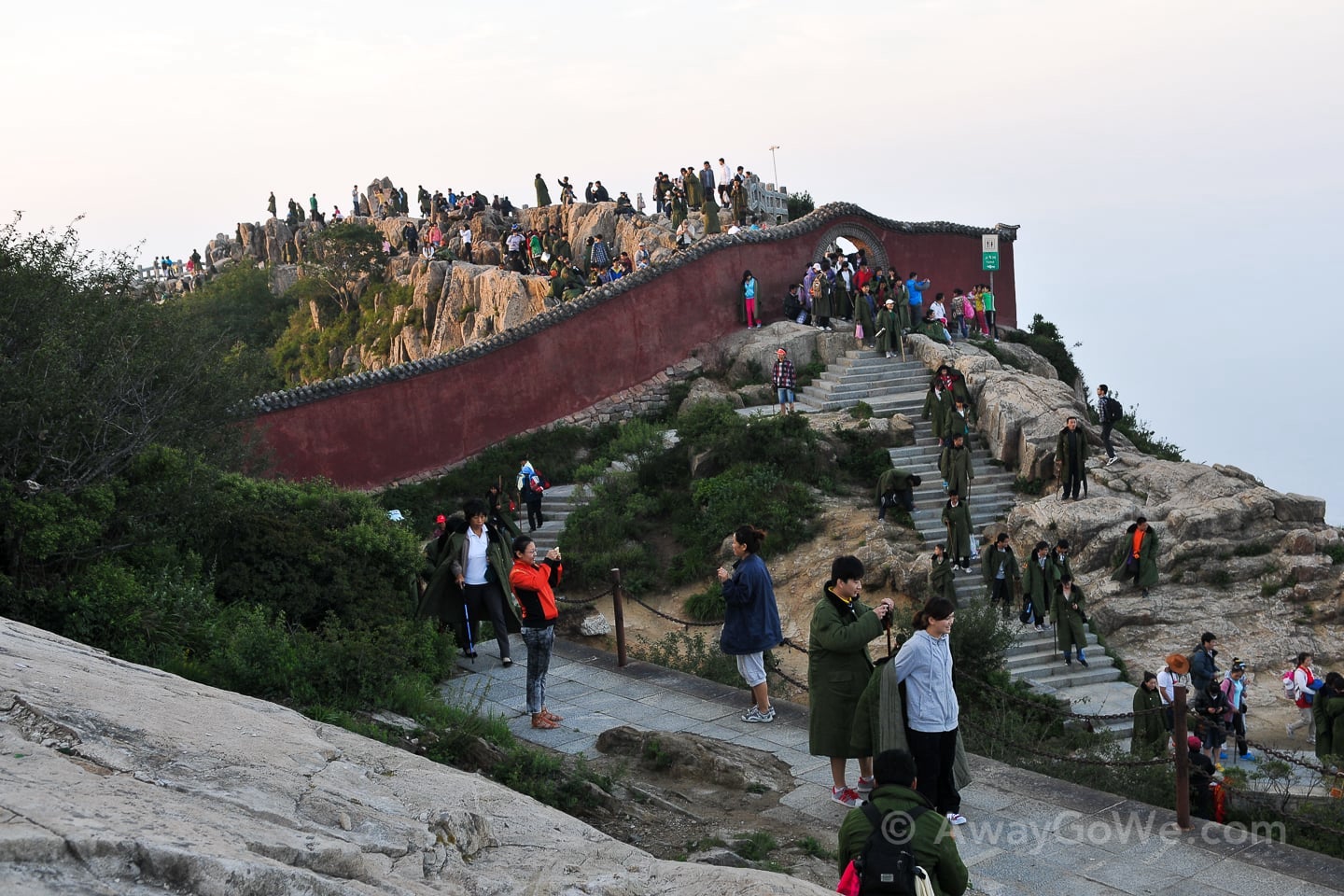 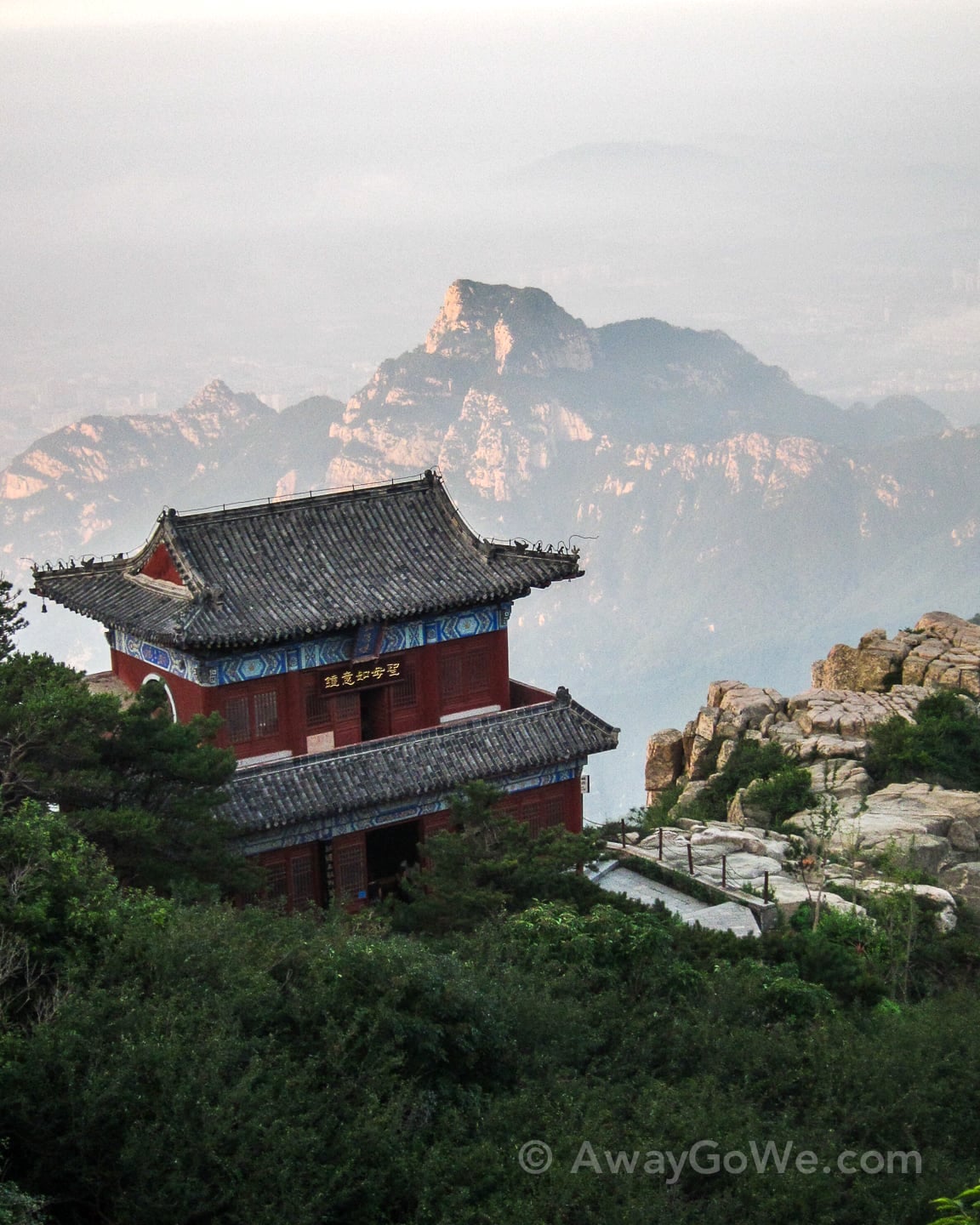 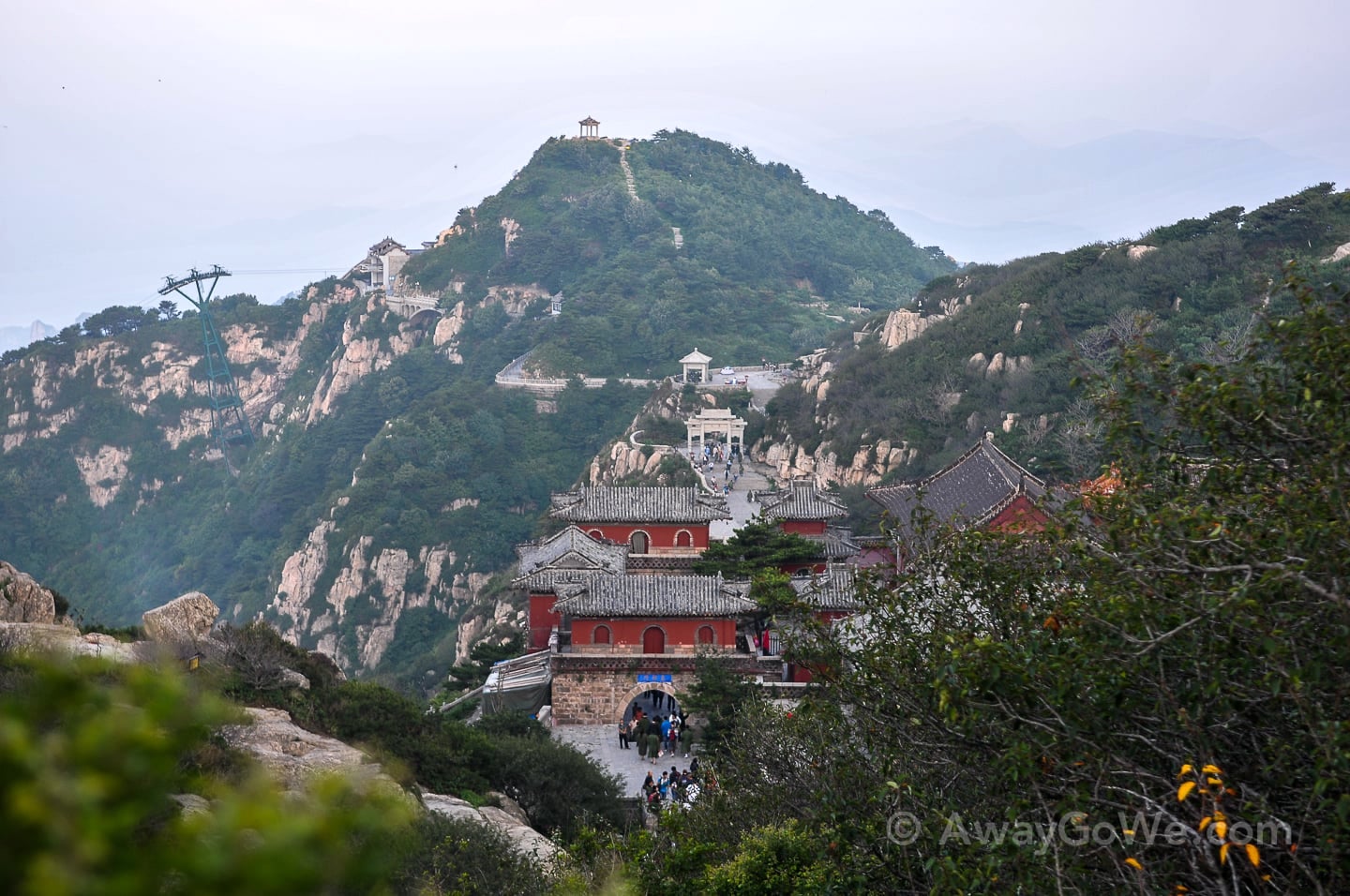 The view along the ridge of the summit.

After the sunrise, the crowds didn’t scatter in every direction but rather headed up in one massive group to the Jade Emperor Temple, the highest point on the mountain. We had most definitely missed that memo, but followed the throngs nonetheless. The morning air was still crisp and chilly so many morning revelers continued to wear their rented army jackets well into the day. The cool temperatures were a most welcome respite from the agonizing heat of Shanghai and Suzhou. 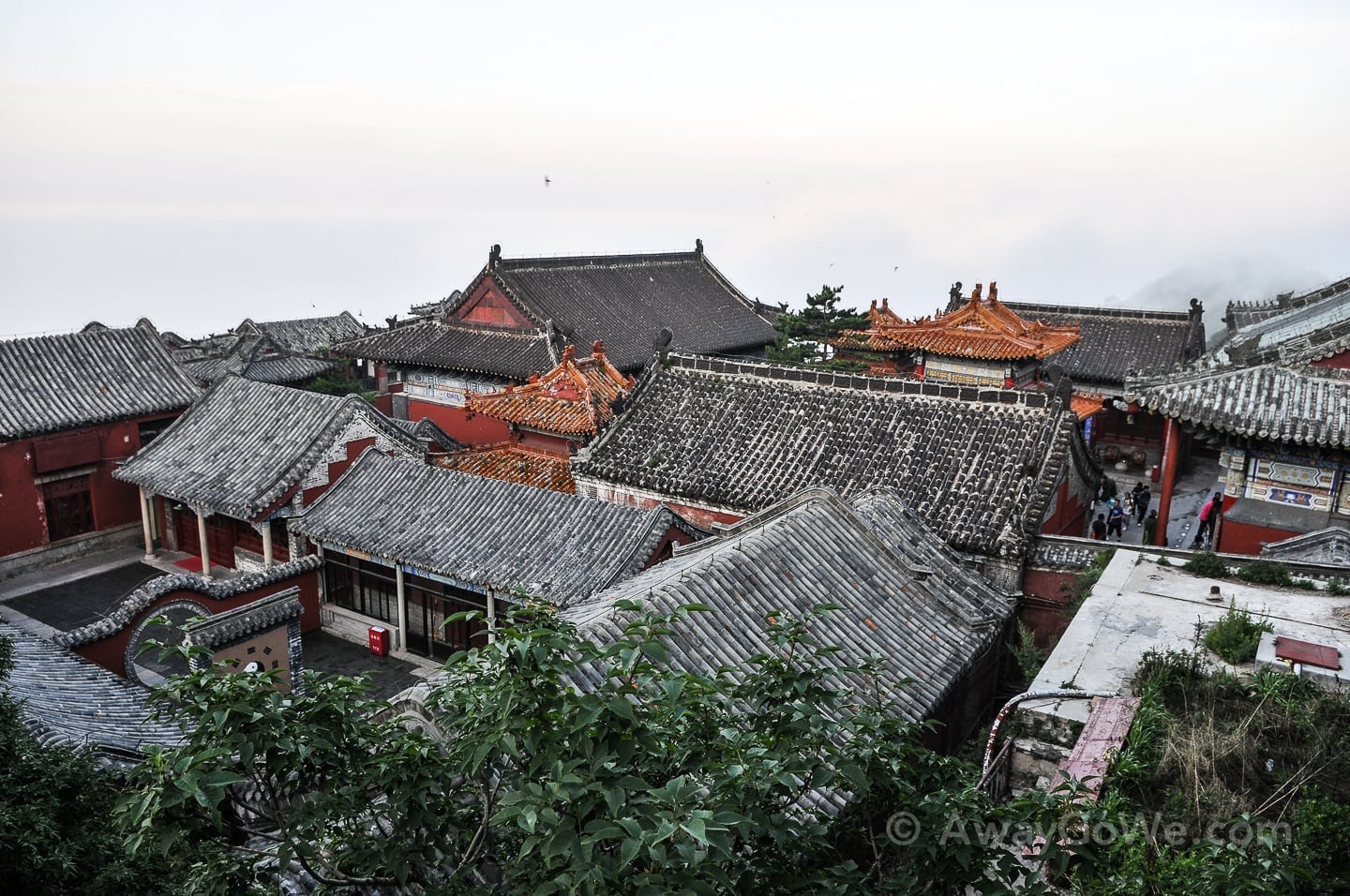 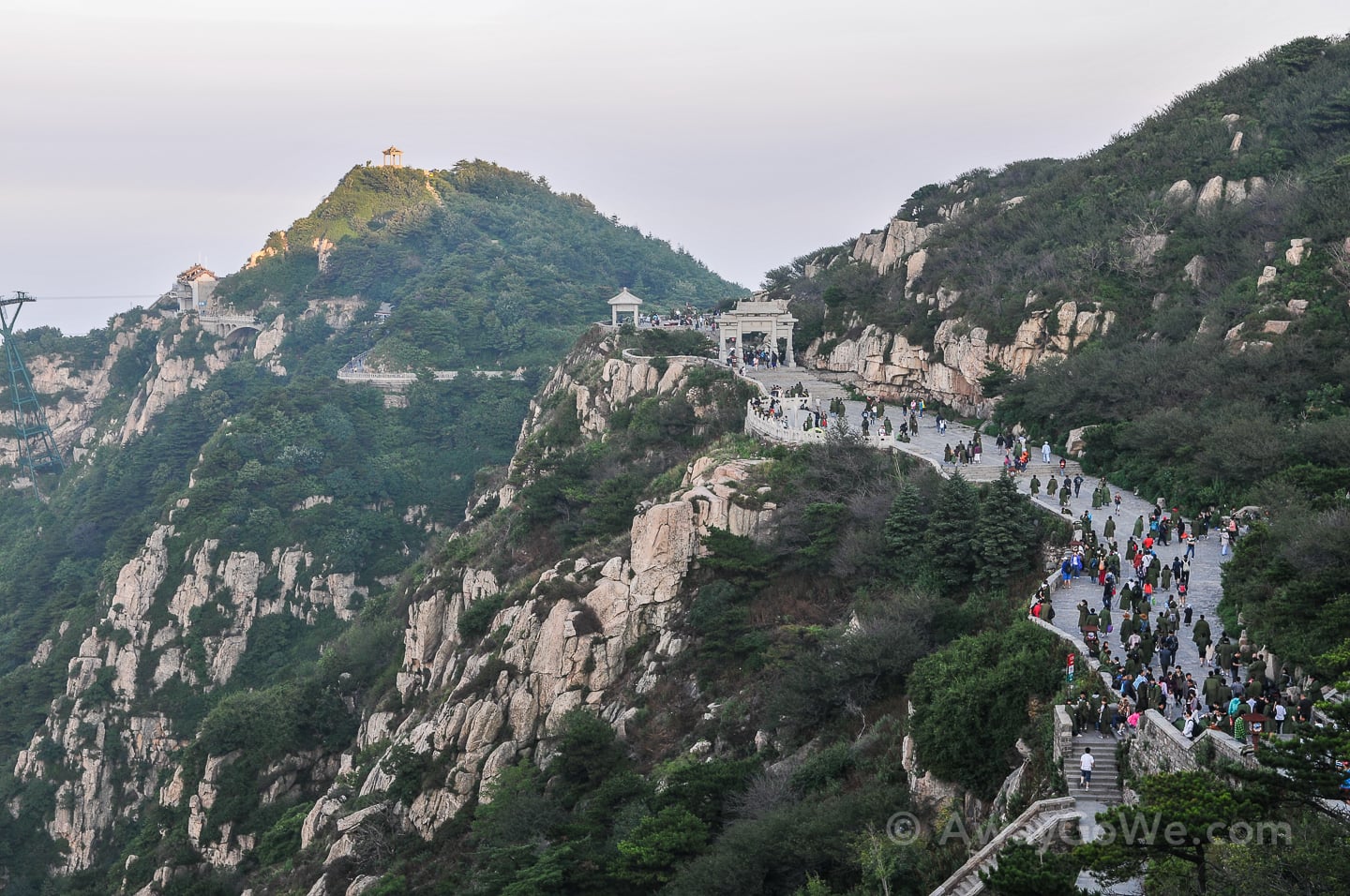 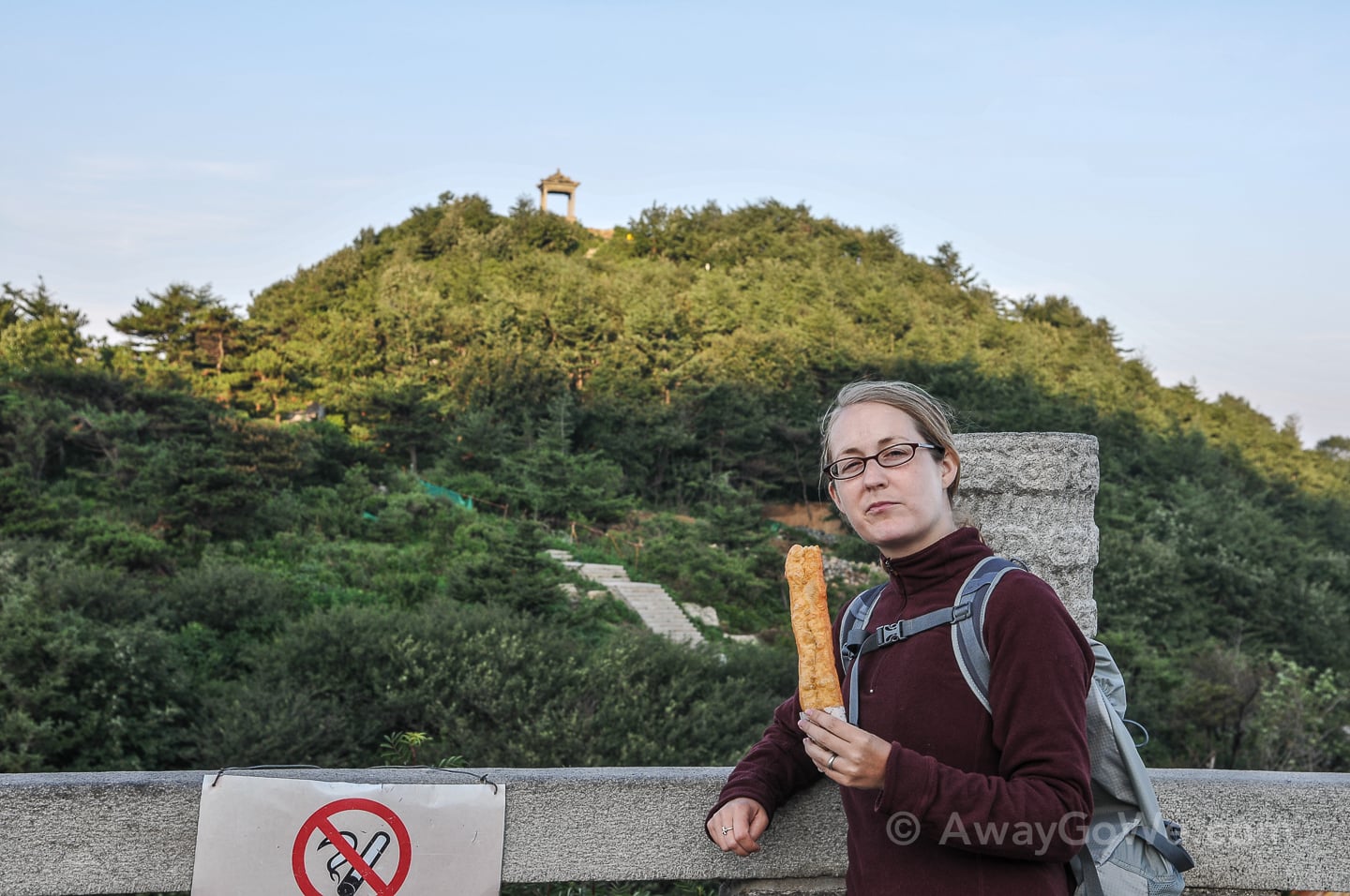 Breakfast on the mountain. 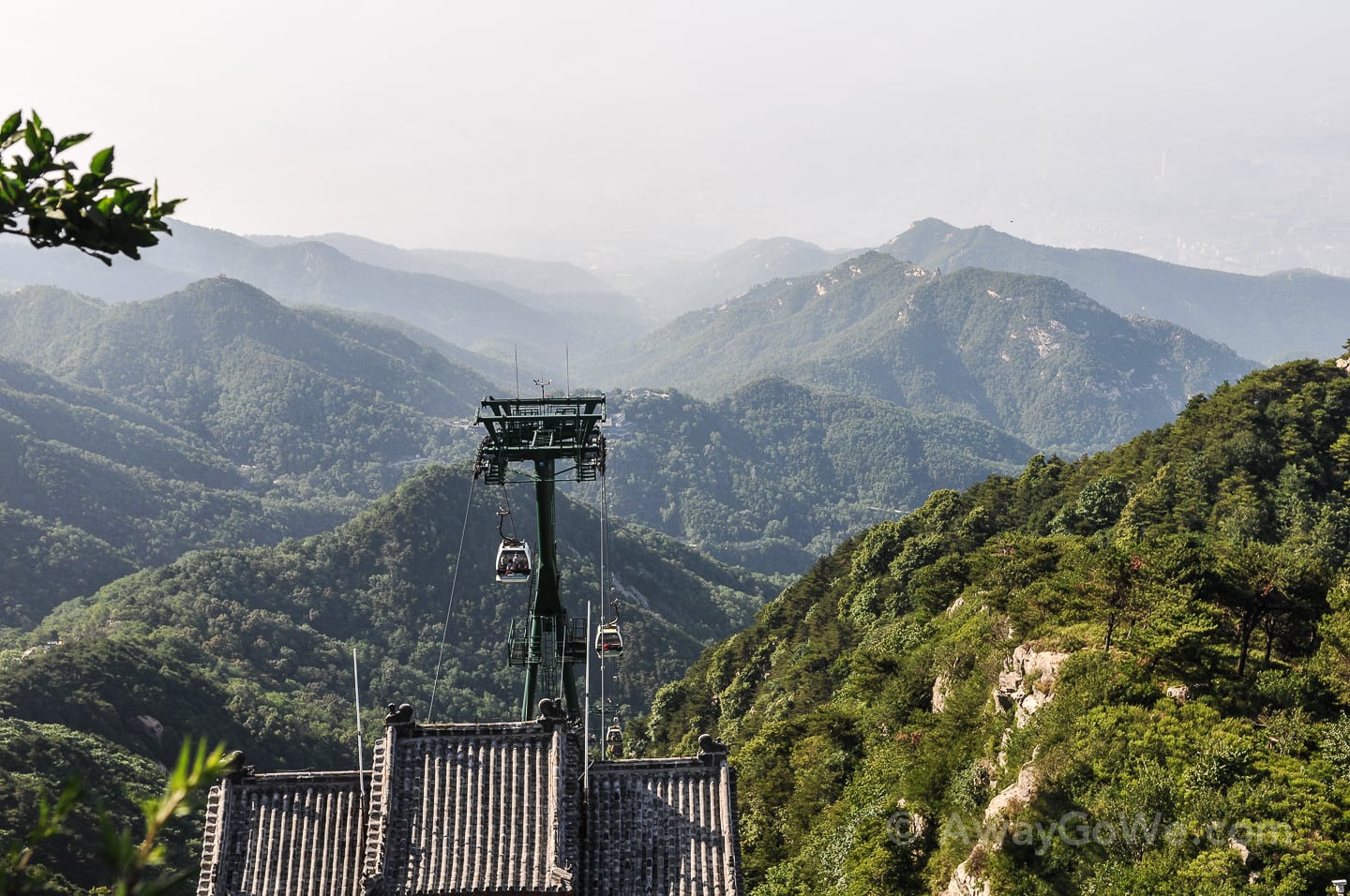 By mid-morning, the cable cars were roaring along, ferrying visitors up and down the mountain. 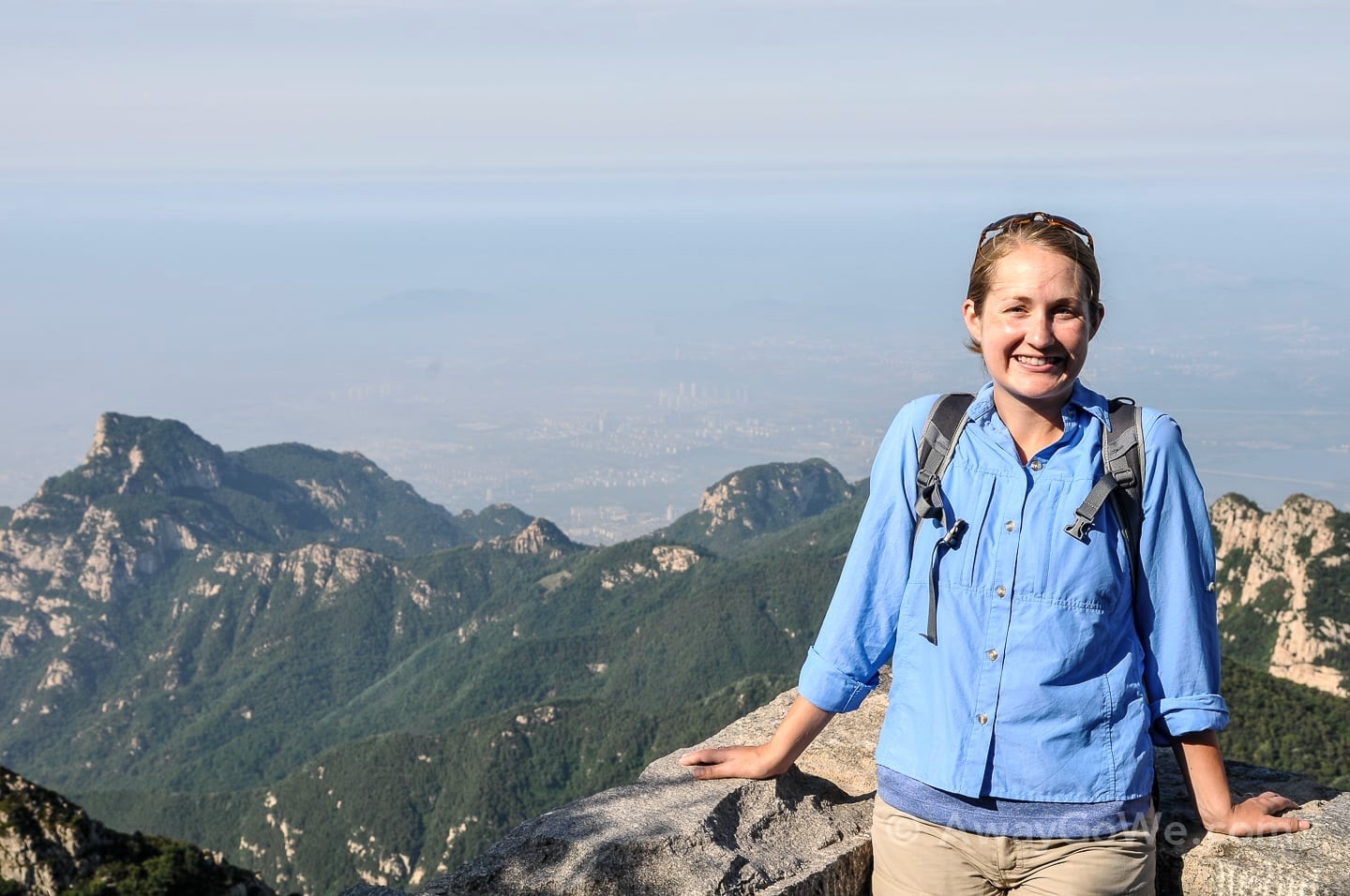 Morning on the summit. 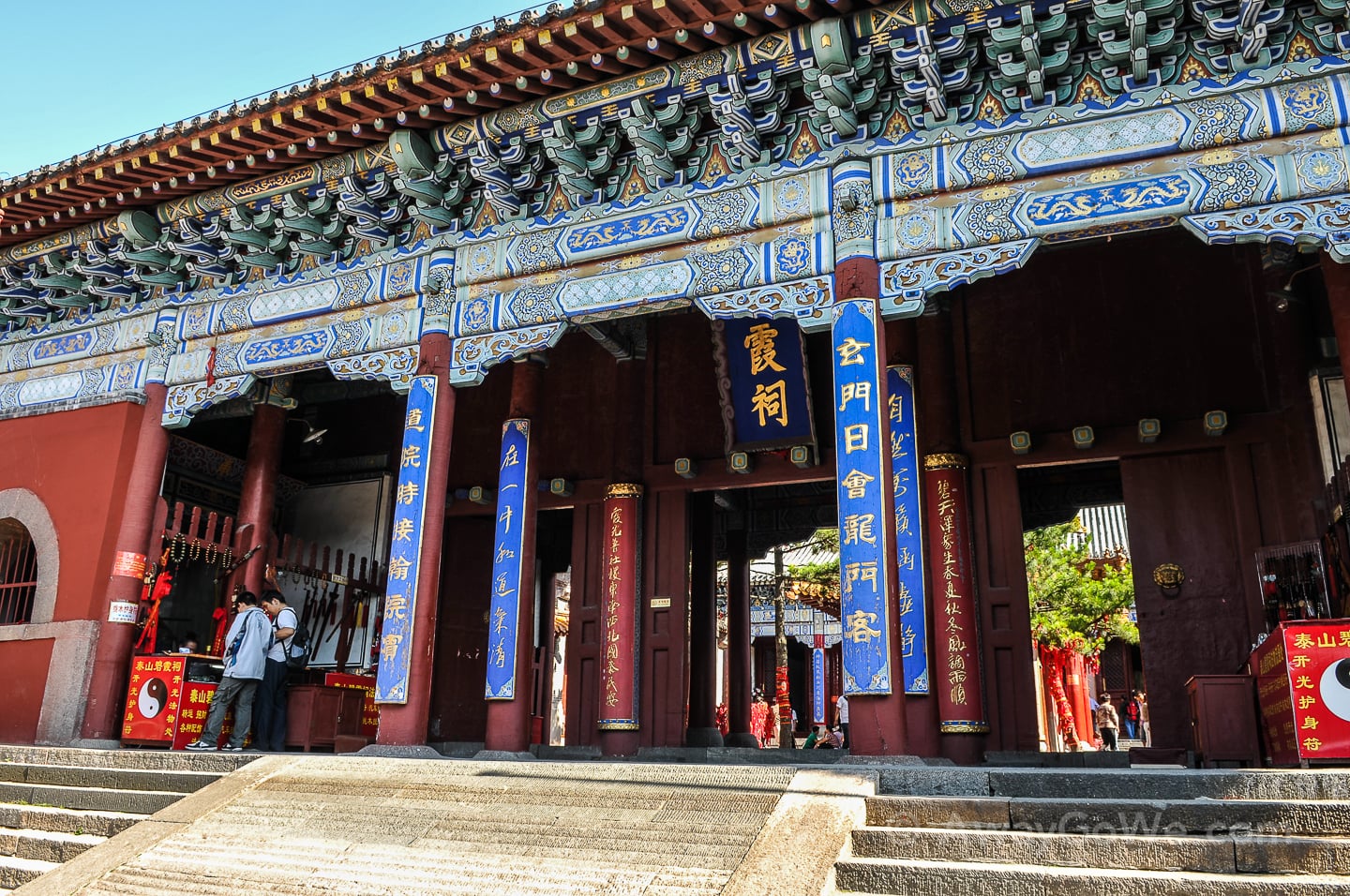 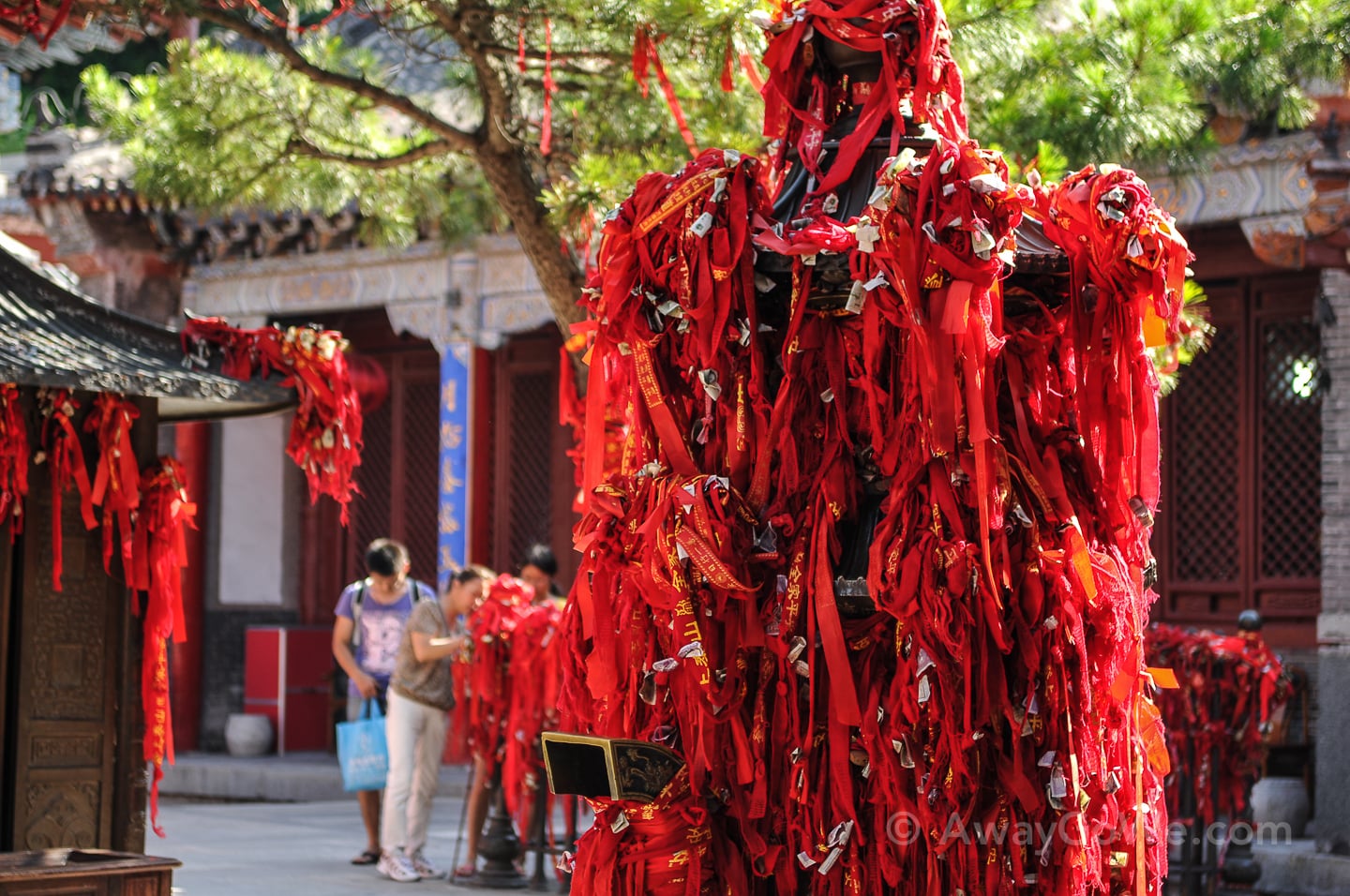 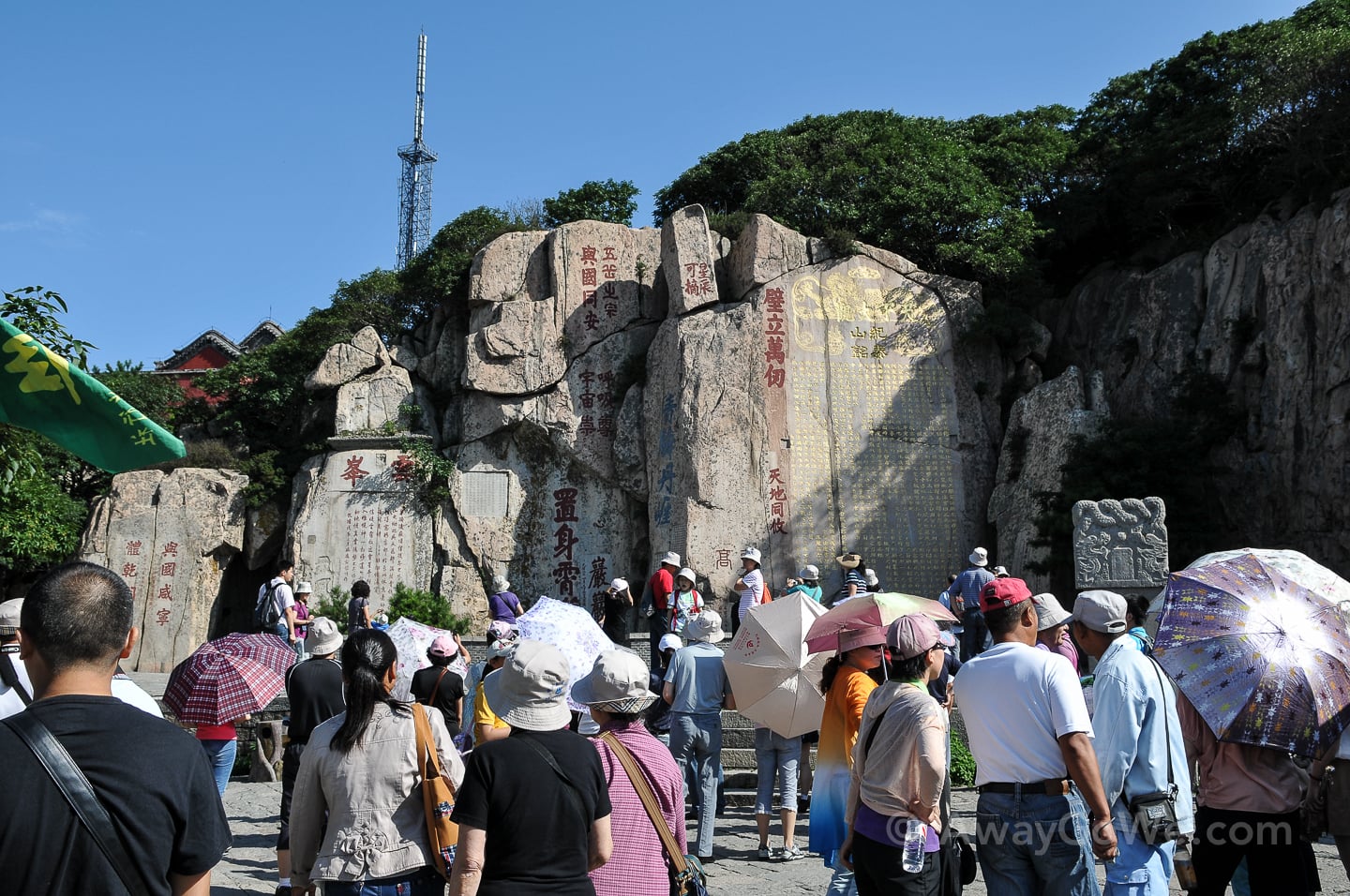 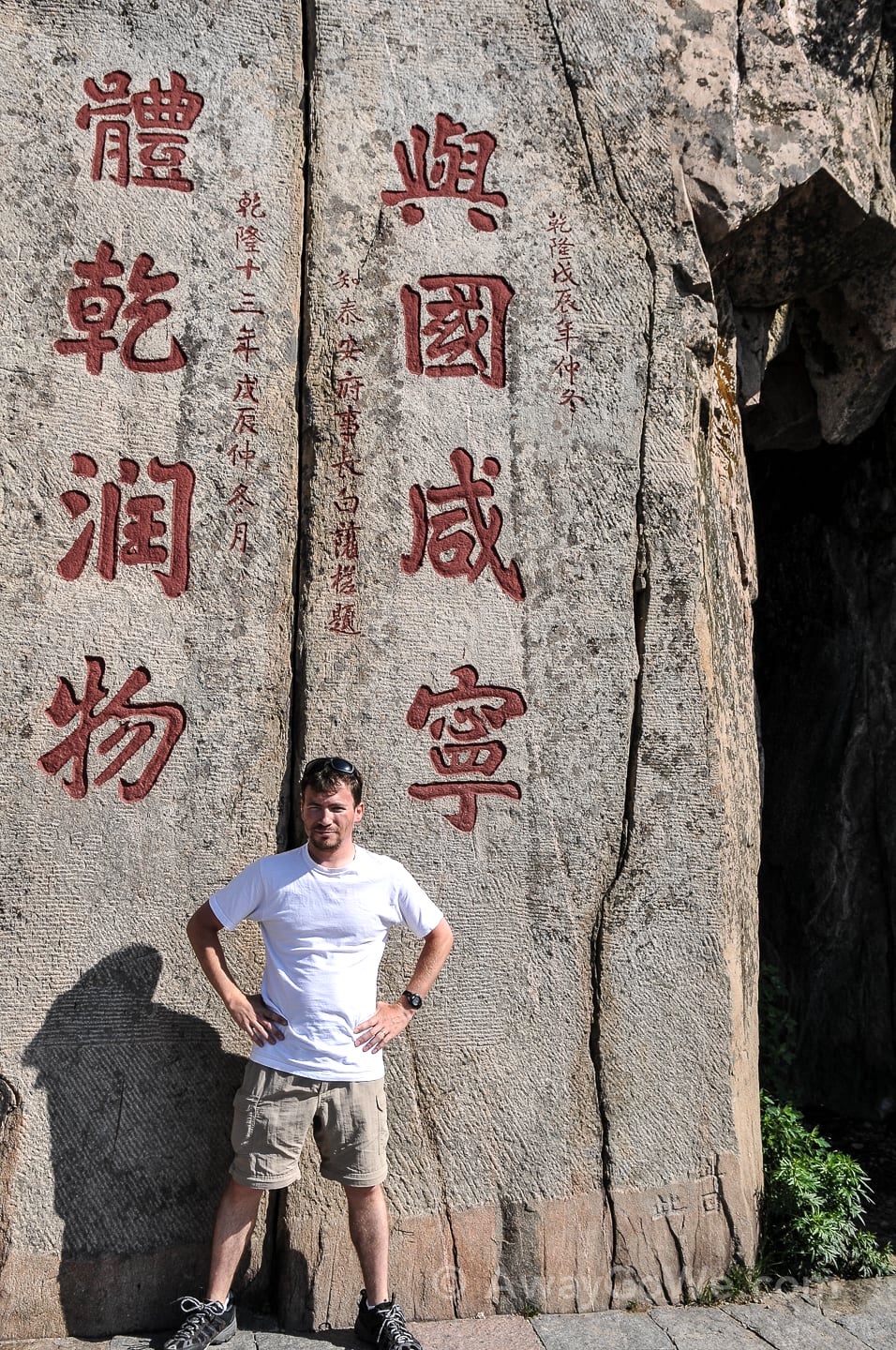 Does anyone have any idea what this says? With my luck it’s something lewd and/or self-depricating. 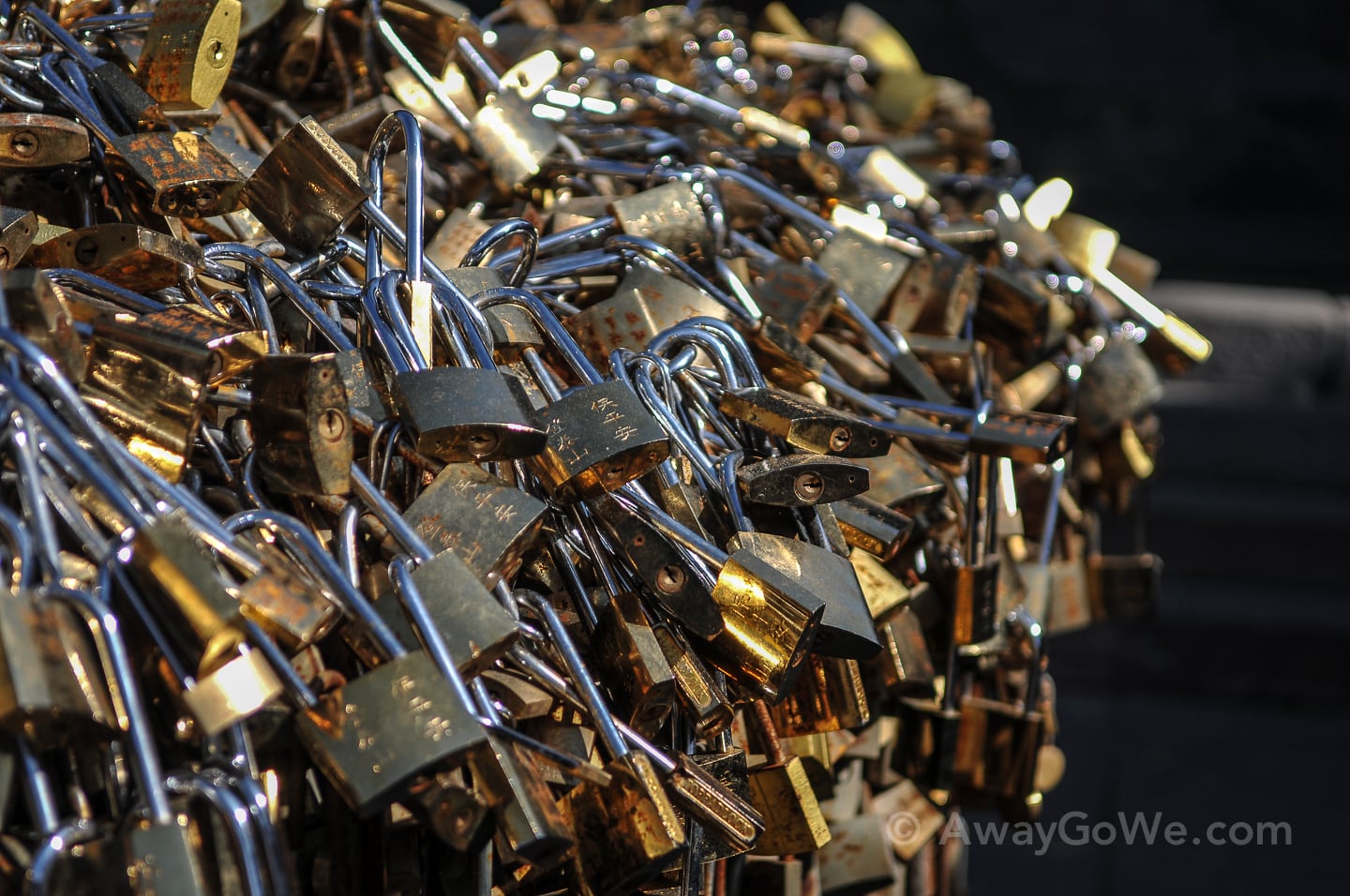 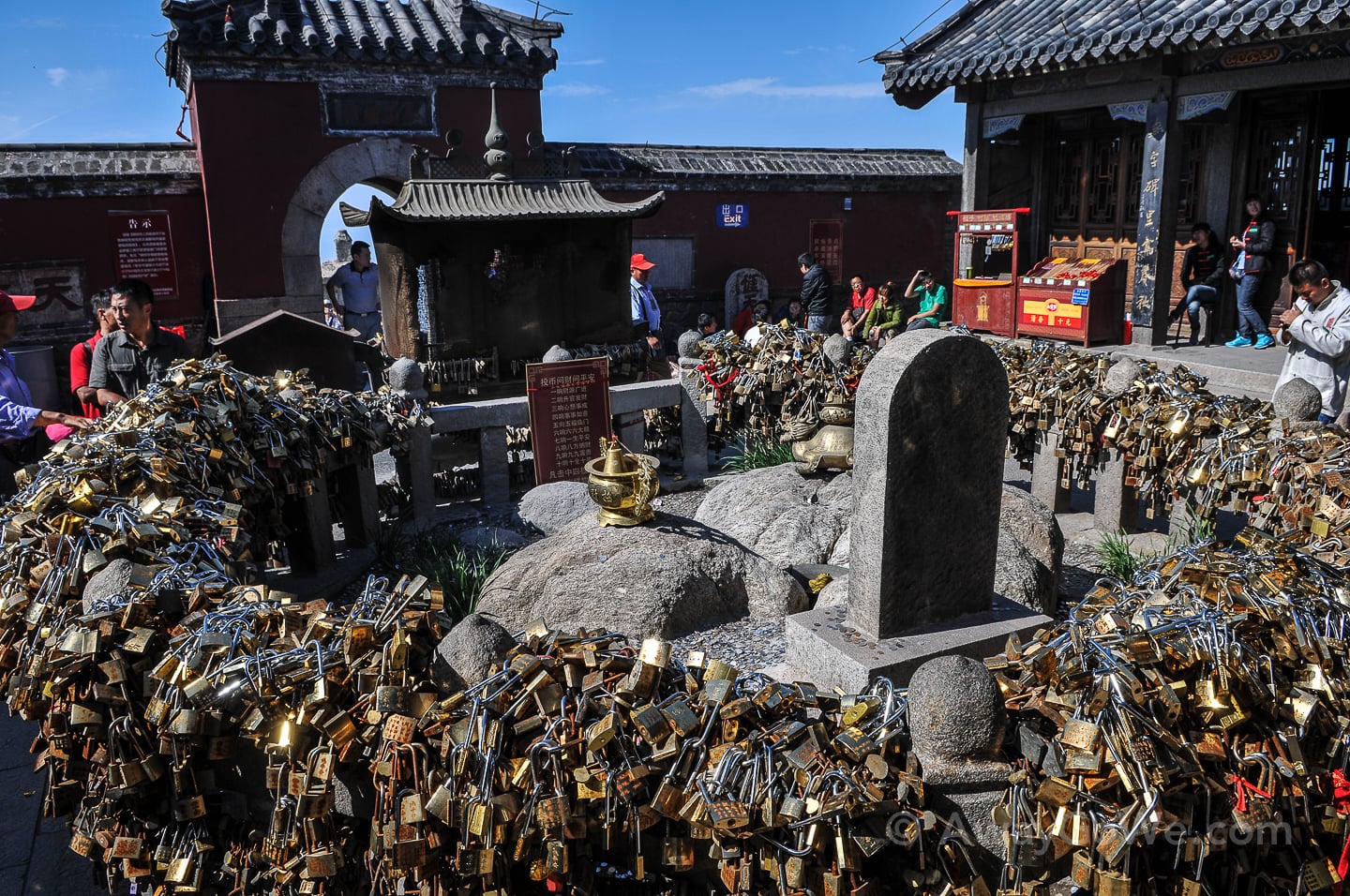 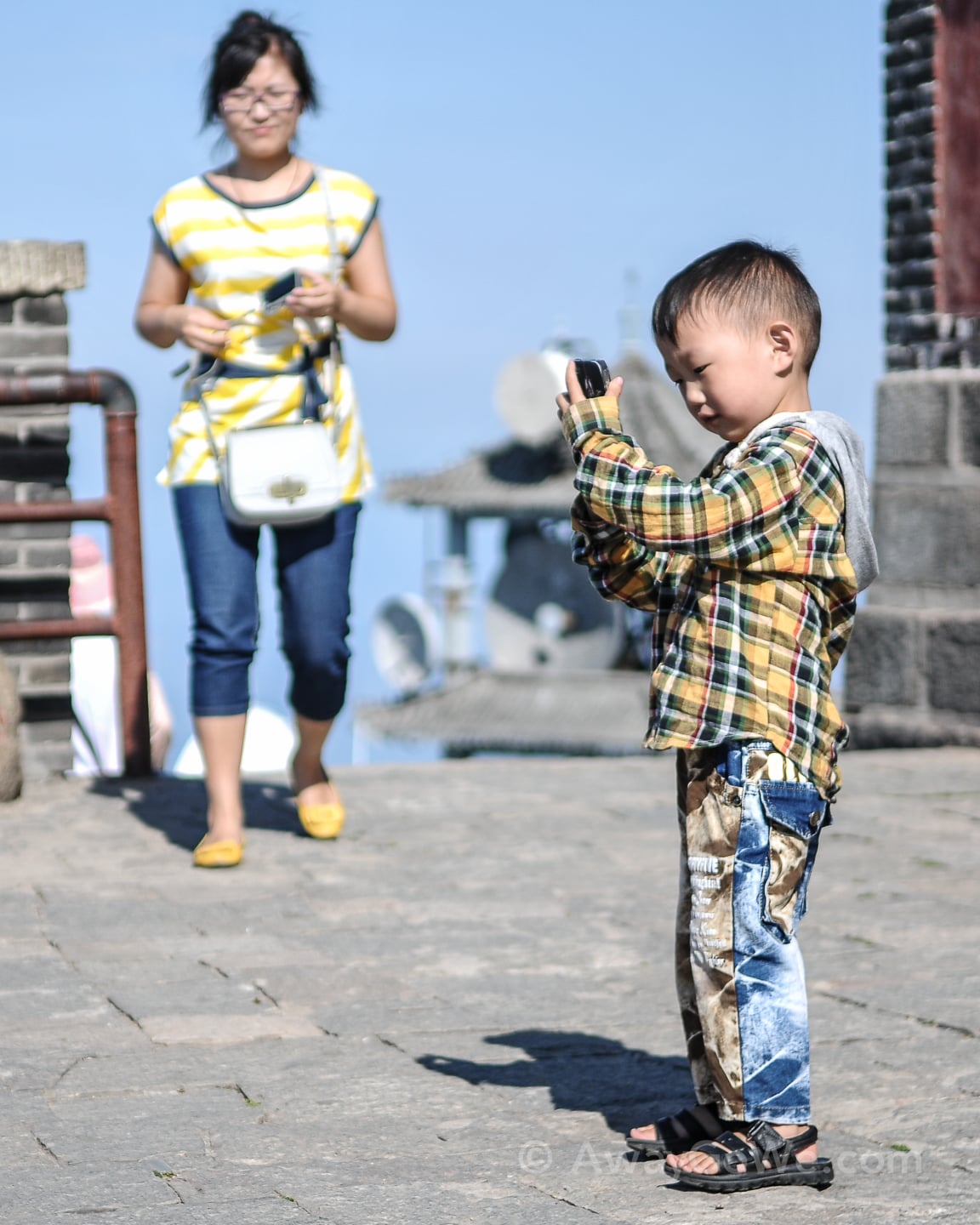 “Hold on mom, it’s that babe Jenny from the Sun Viewing Peak. I better take this one.” 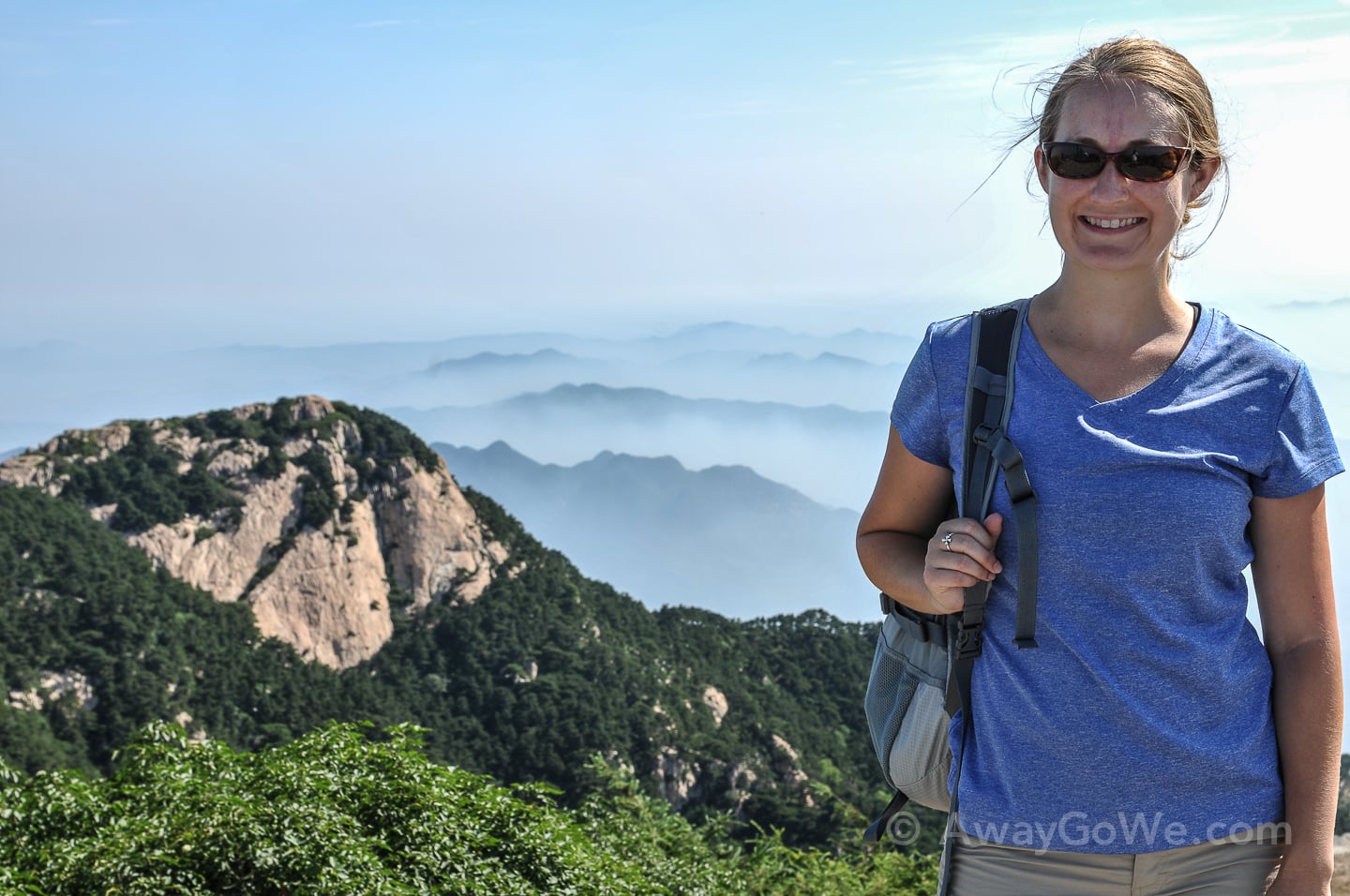 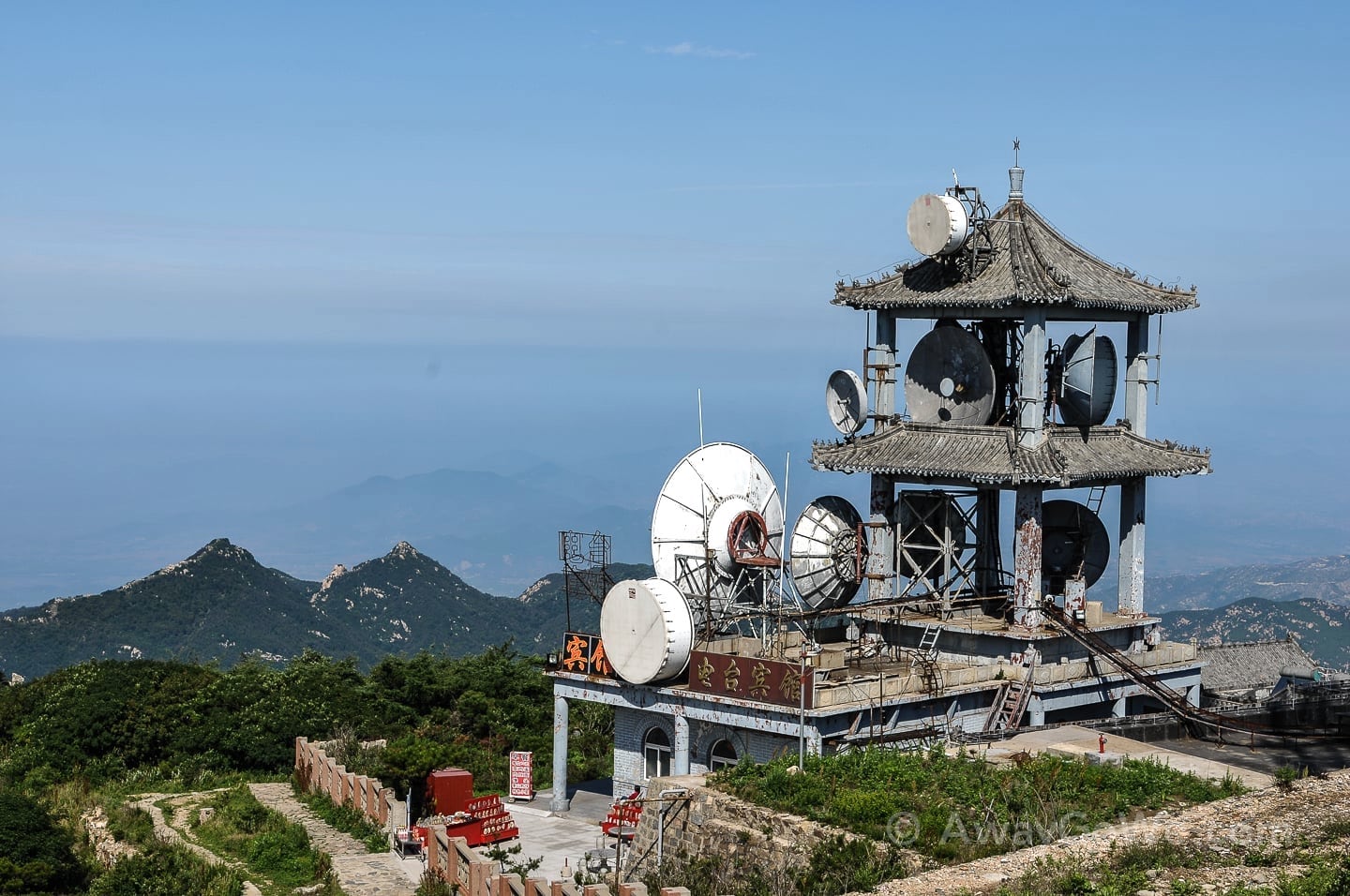 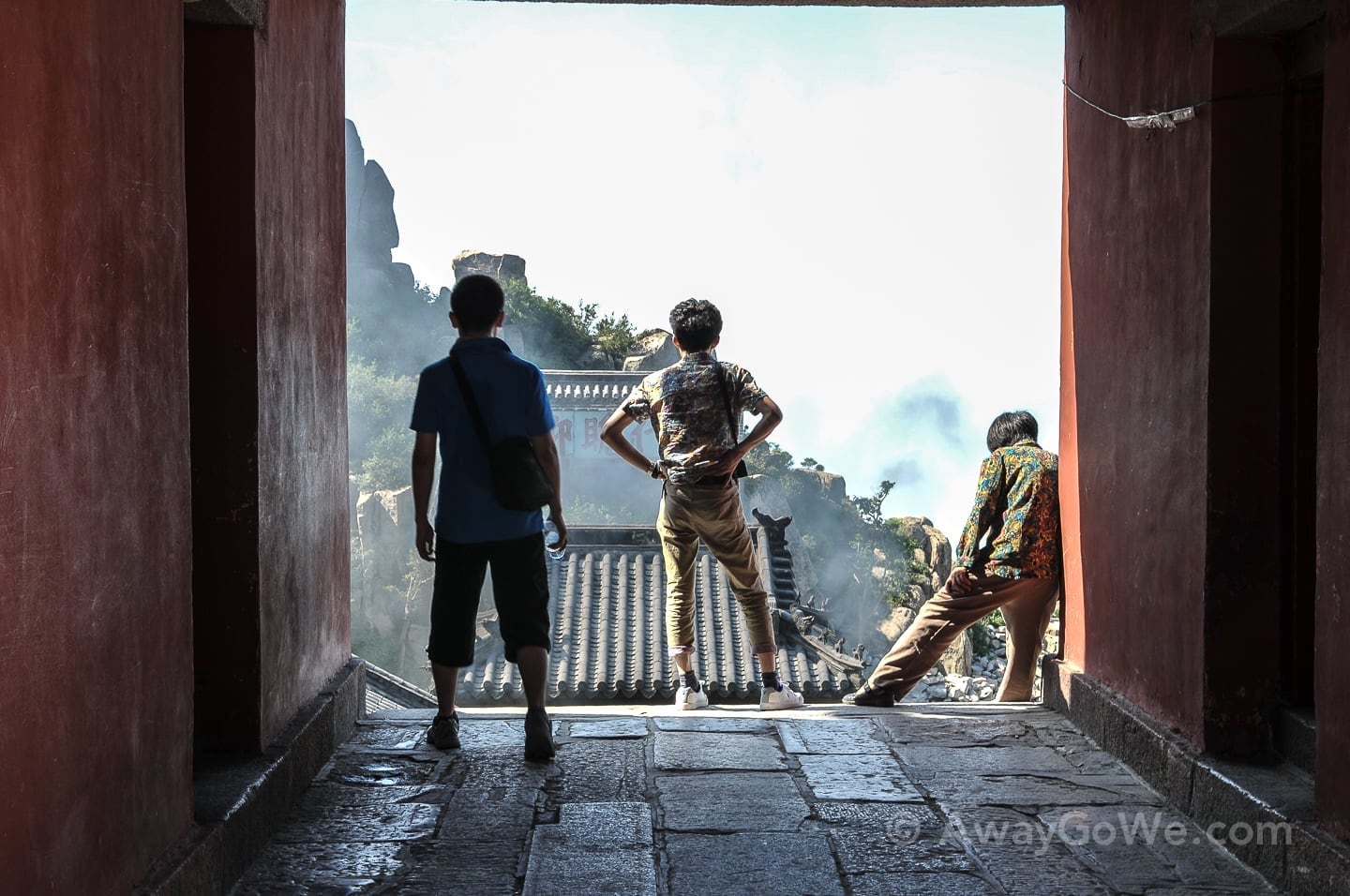 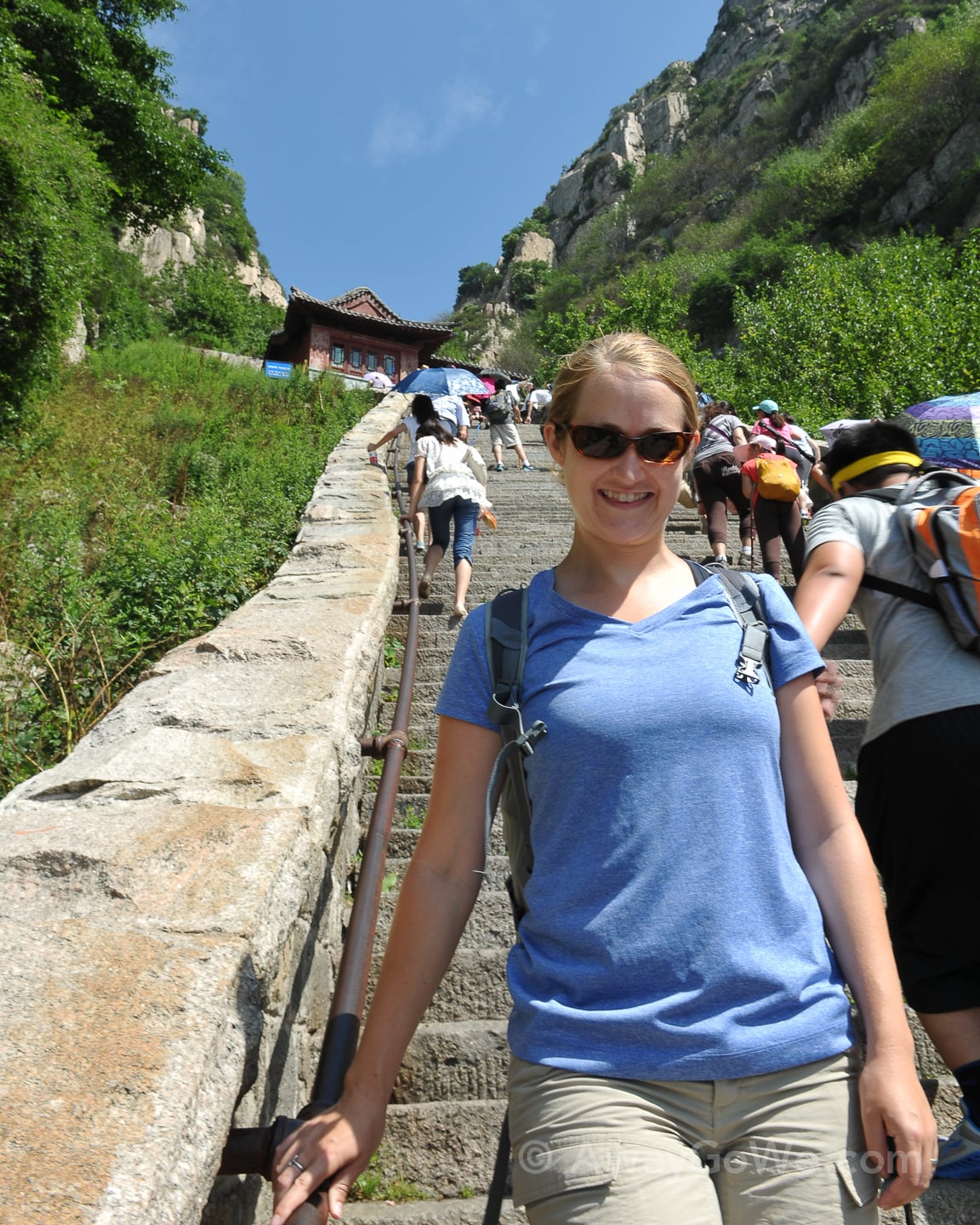 As all good things do, our trip atop China’s holiest mountain finally came to an end. The trip back down the 6,000+ steps took but a fraction of the time as expected, though the toll on our legs was much higher this time around (and we paid for it for several days after, especially descending flights of stairs in Beijing’s various metro stations).

Friday’s ascent was muggy and cloud-covered, but Saturday’s descent was a bit different. A cloudless sky meant higher temps and we were very thankful we were on our way down. Saturday also brought with it many more tourists in both directions, though the walk down from the half-way point was pleasantly sparse and shaded.

One thing that marked our Taishan experience was a dramatic increase in Chinese taking photographs of the two of us. Certainly, this happened in other places throughout our trip, but none so much as up, down and all around Mt. Tai. People would stand no less than 10 feet in front of us and take our picture. Some would be more covert about it, but on the whole it was pretty blatant and unapologetic. What was even stranger was the number of young people asking to have our picture taken with them.

It got to the point where it began to make us feel quite uncomfortable, angering us at times. But we soon came to feel that on the whole, the picture taking was quite innocent and it seemed to make people happy (especially the one’s who asked to have a picture taken with us). Westerners in a lot of parts of China are still quite rare, and media is still largely controlled, so young Chinese seem often very eager and excited to engage with foreigners because of this.

Just as weeks later while on a bus in Yunnan there appeared a rainbow – everyone on the bus became frantically excited as if it were the Second Coming (the bus driver included, so much, that he pulled the bus over immediately and our fellow Chinese passengers scrambled out). Many of these tourists come from large cities such as Beijing, Jinan, Shenzhen, Shanghai. Perhaps it is the pervasive “fog” that blankets such cities, or the dense canyons of concrete, but it isn’t crazy to assume that the majority of young people on that bus had never laid on eyes on a real rainbow. This is the vein in which I like to think of our strange and awkward encounters with the Chinese. 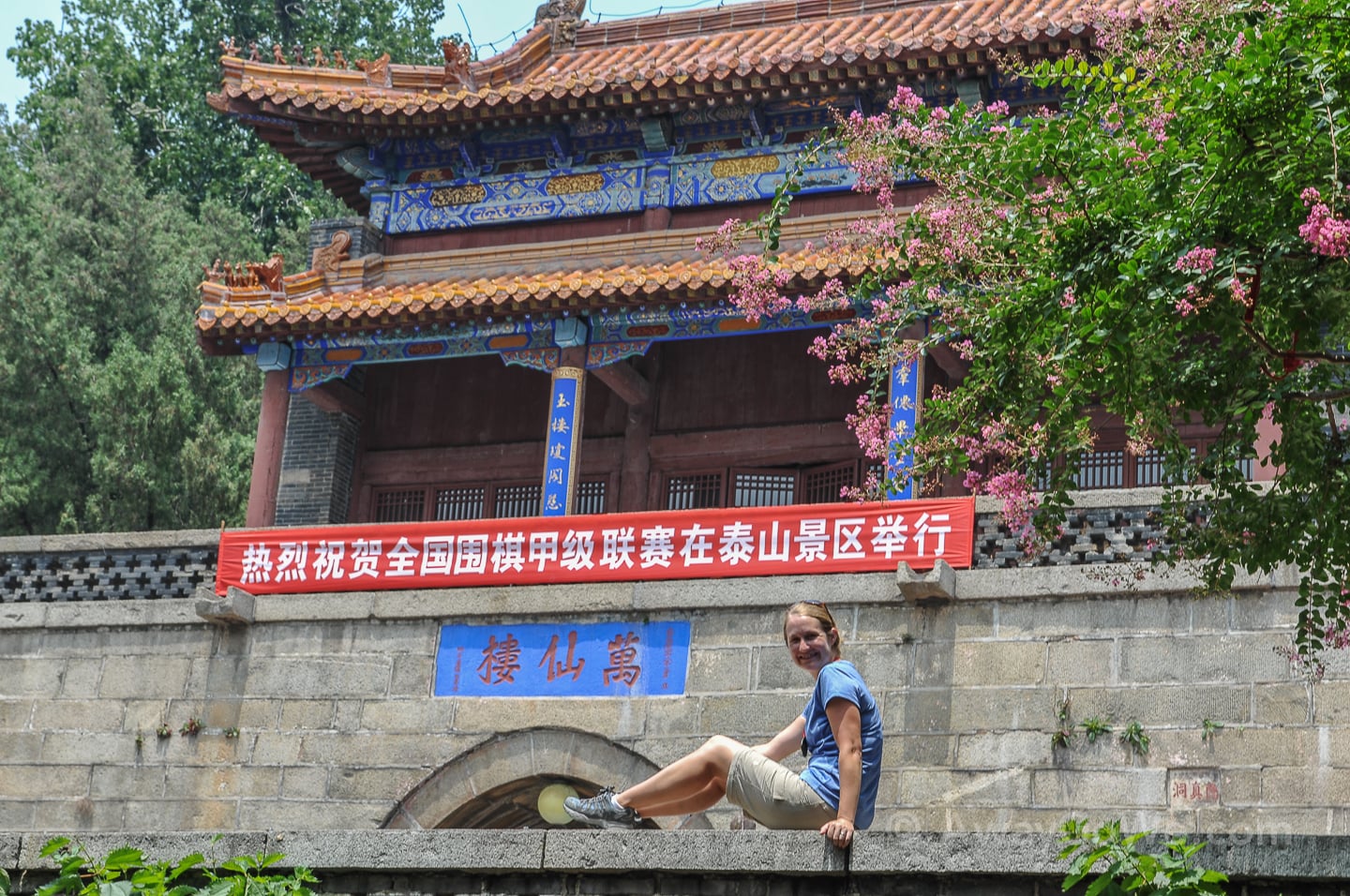 After two hours we made it to the ticket office, which concluded our journey up and down the mountain. Jelly legs and all, we hobbled back to the hostel to pick up our big packs and catch the G-train to Beijing. 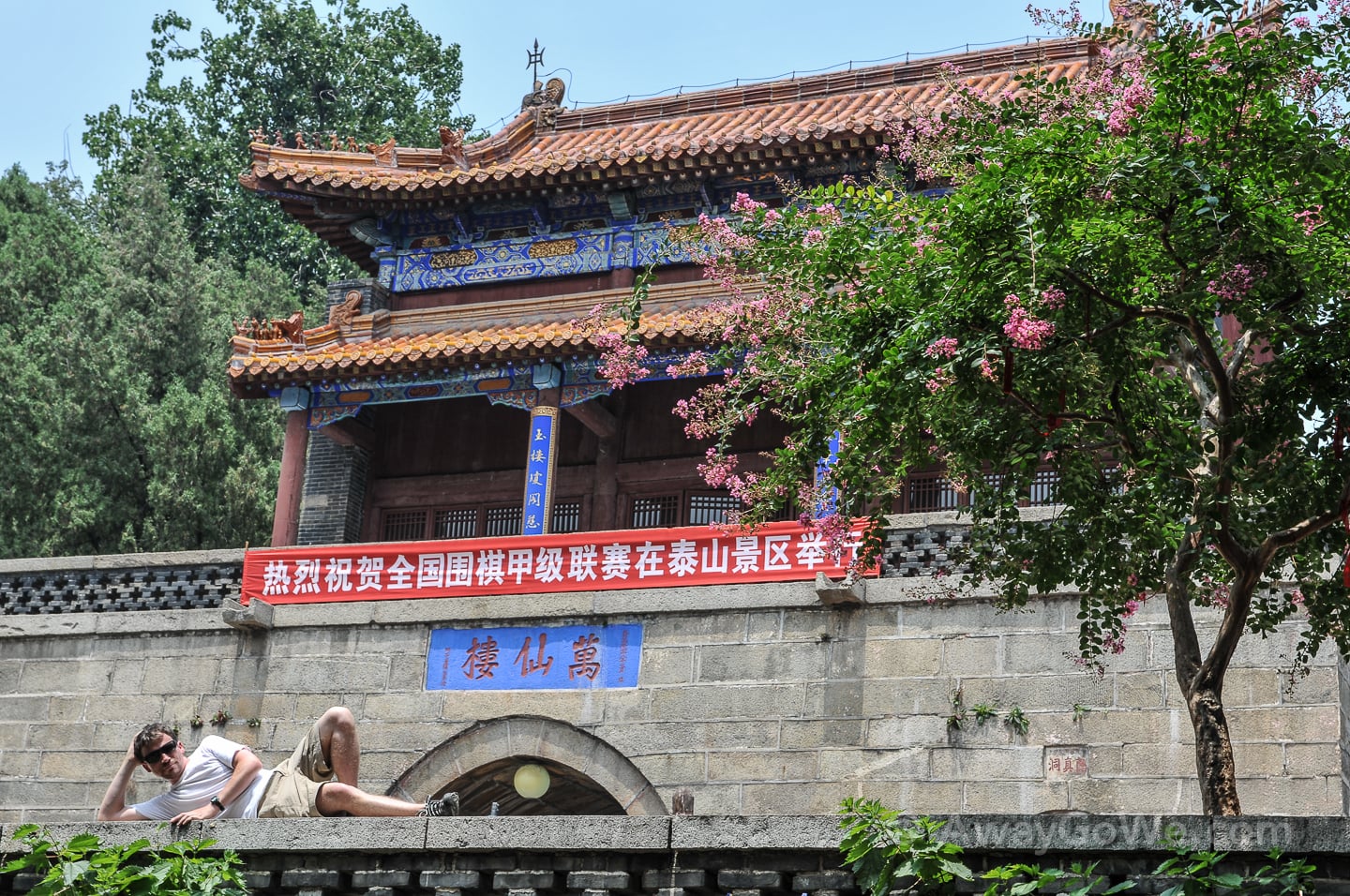 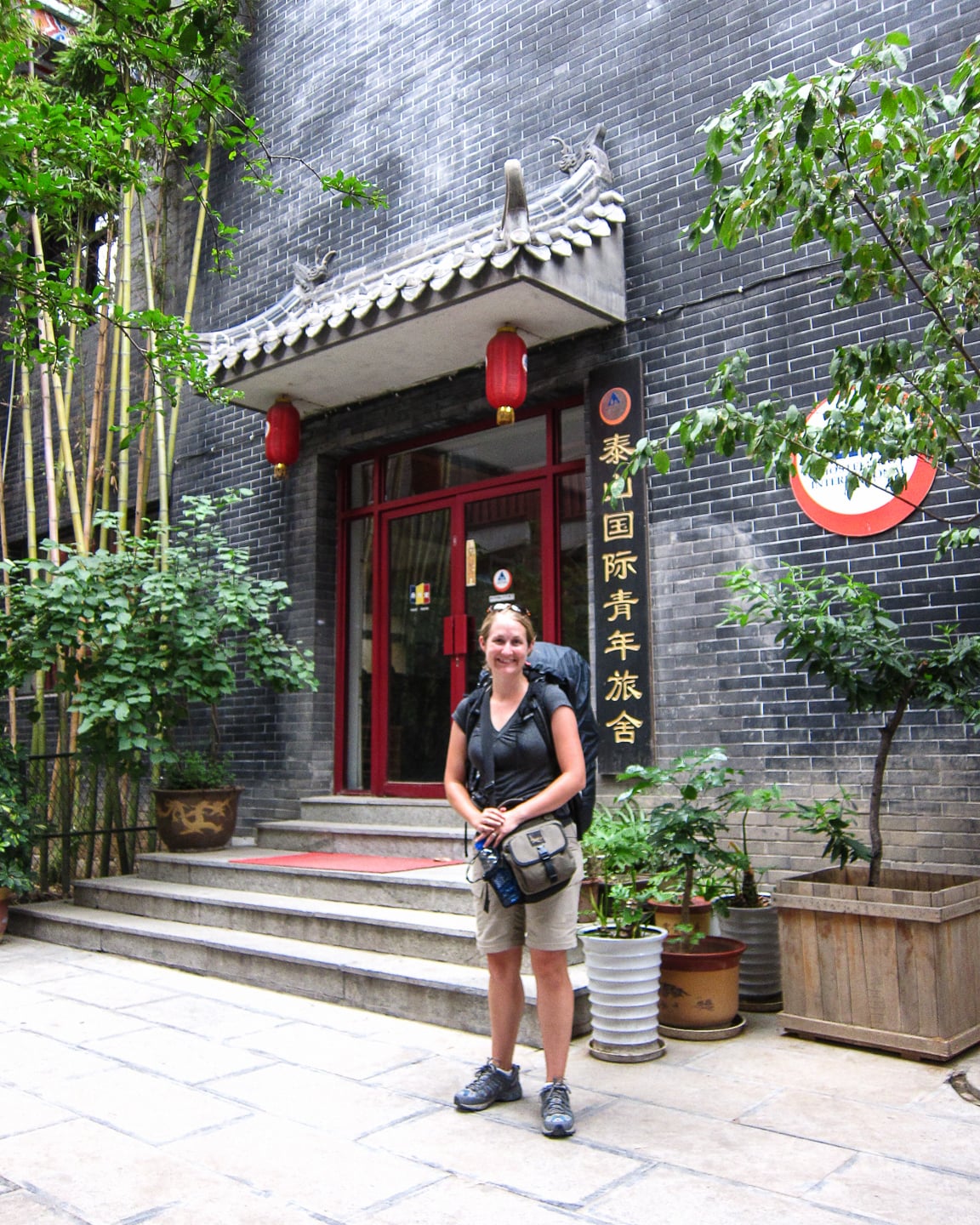 In front of Taishan International Youth Hostel, on our way to hail a taxi to the high-speed rail station. 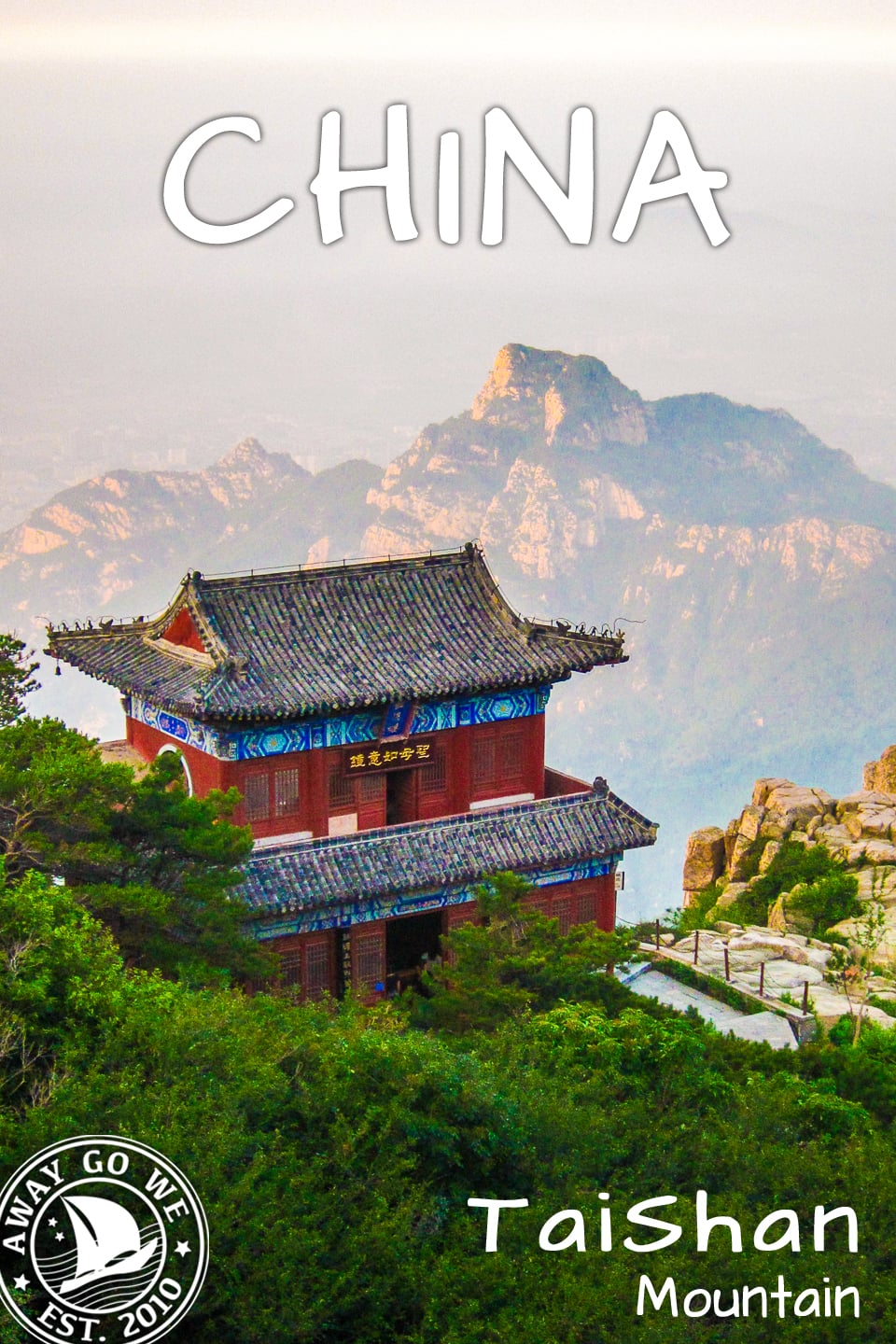 Thank you for writing these posts about Tai Shan. It’s so hard to find information about hotels, routes, etc. My husband and I are planning a trip there this week, and now I feel much better about our chances of having a good trip.
What beautiful photos, too! Now I’m really excited to see it for myself!

Thanks for the kind words, Bridgett. It was really hard for us to find good info as well so I’m happy that we were able to help out. It really was a great experience — certainly one that stands out from the rest. Enjoy and best of luck!

Now any entrepreneur should set up a message business for those concluding the hike.