Pingyao is a world in itself, frozen in time somewhere in the middle of the last two Dynasties. If we had to choose one place in China to spend almost a week of our trip, we certainly could have done a lot worse.

We arrived in the ancient walled city of Pingyao on a Wednesday and stayed for an unprecedented five nights. A lengthy stay in Pingyao was certainly not unexpected given its UNESCO status, but we also had no other choice given the difficulty with obtaining train tickets onward to Xi’an, our next stop after Pingyao.

If we had to choose just one place in China to spend almost a week of our trip, we certainly could have done a lot worse. Pingyao is a world in itself, frozen in time somewhere in the middle of the last two Dynasties with roots going back many centuries. It was never a terribly important city which saved it from the fate suffered by other more prominent ancient walled cities such as Xi’an which is a thriving and thoroughly modern metropolis inside and outside of the ancient city.

Pingyao is unapologetically touristy, but in a way that blends old world charm with modern convenience. Everything is an excellent value in Pingyao — the food, the accommodation, even the handicrafts are very reasonably priced, but all very high quality as well.

And the best part is that unlike other ancient cities like Lijiang, Pingyao wasn’t over-run with tourists. One of the reasons for this might be its location off the beaten path (it’s difficult to get direct train service to Pingyao from Beijing without changing trains in Taiyuan). Additionally, its main draw are the numerous historical sights scattered throughout the city which didn’t seem to quite have the draw that Lijiang’s crazy dance clubs do for China’s hoards of middle-class youth. Middle-aged Chinese tourists are carted in by day and leave by dinner time. One gets the sense that not a lot of people (besides a smattering of foreigners) actually stay the night in Pingyao, and all the better.

For four relaxing days, Lori and I strolled the cobblestone streets, poked into local merchant shops, explored the back alleyways off the beaten track, walked the ancient wall, sipped tea and coffee at Pingyao’s many excellent cafes, coffee shops and restaurants, and explored dozens of courtyard mansions, temples and towers with the city pass (you have to buy the pass to gain access to most of the city’s historical sights including the ancient wall).

During our stay, the weather was quite agreeable. Despite it being mid-summer, temperatures stayed around mid-80s with moderately low humidity. It rained a couple of evenings, but never for more than a few hours. Most days were overcast, but we did get a day or two of brilliant sunshine and a nice sunset. 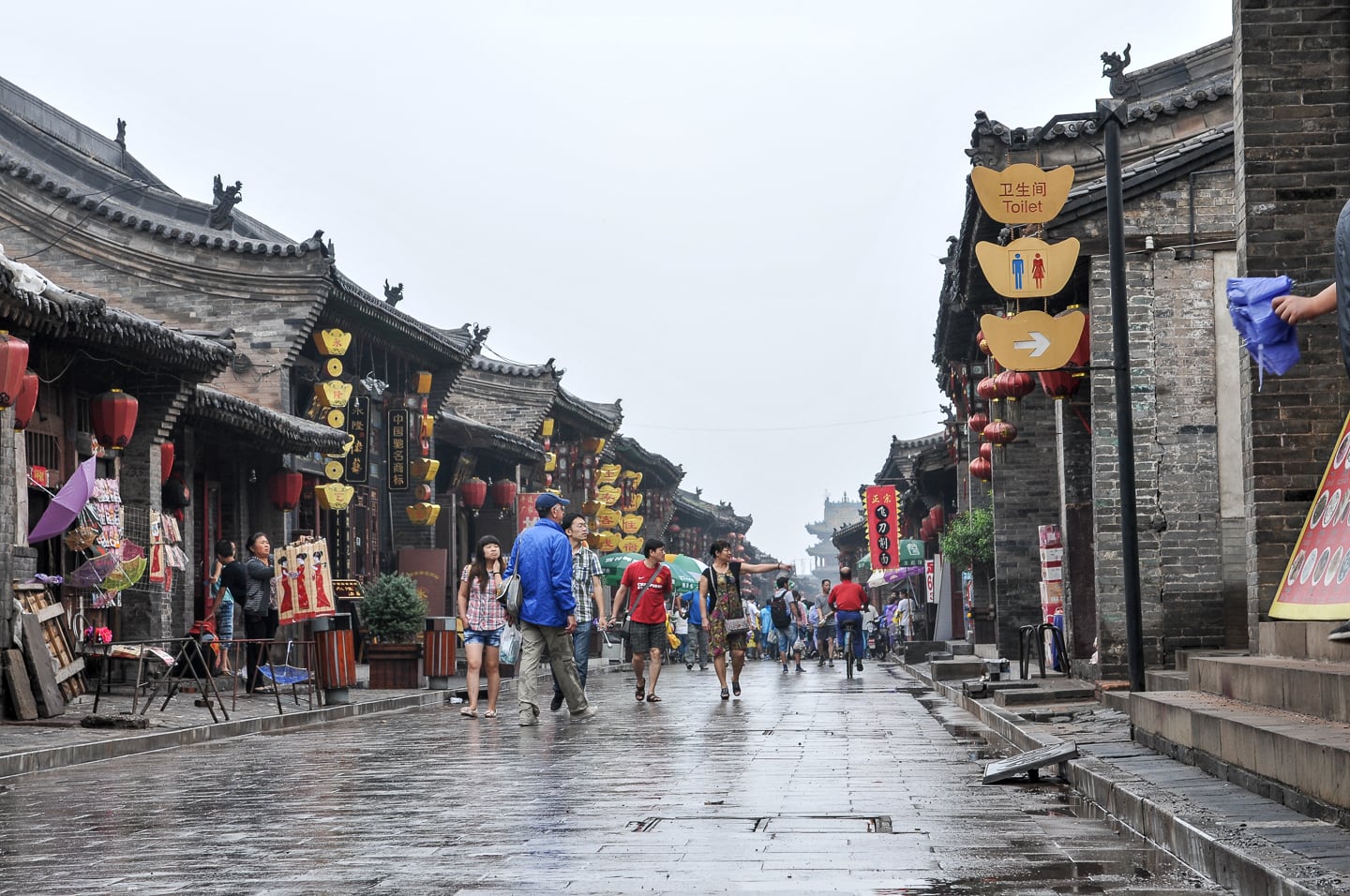 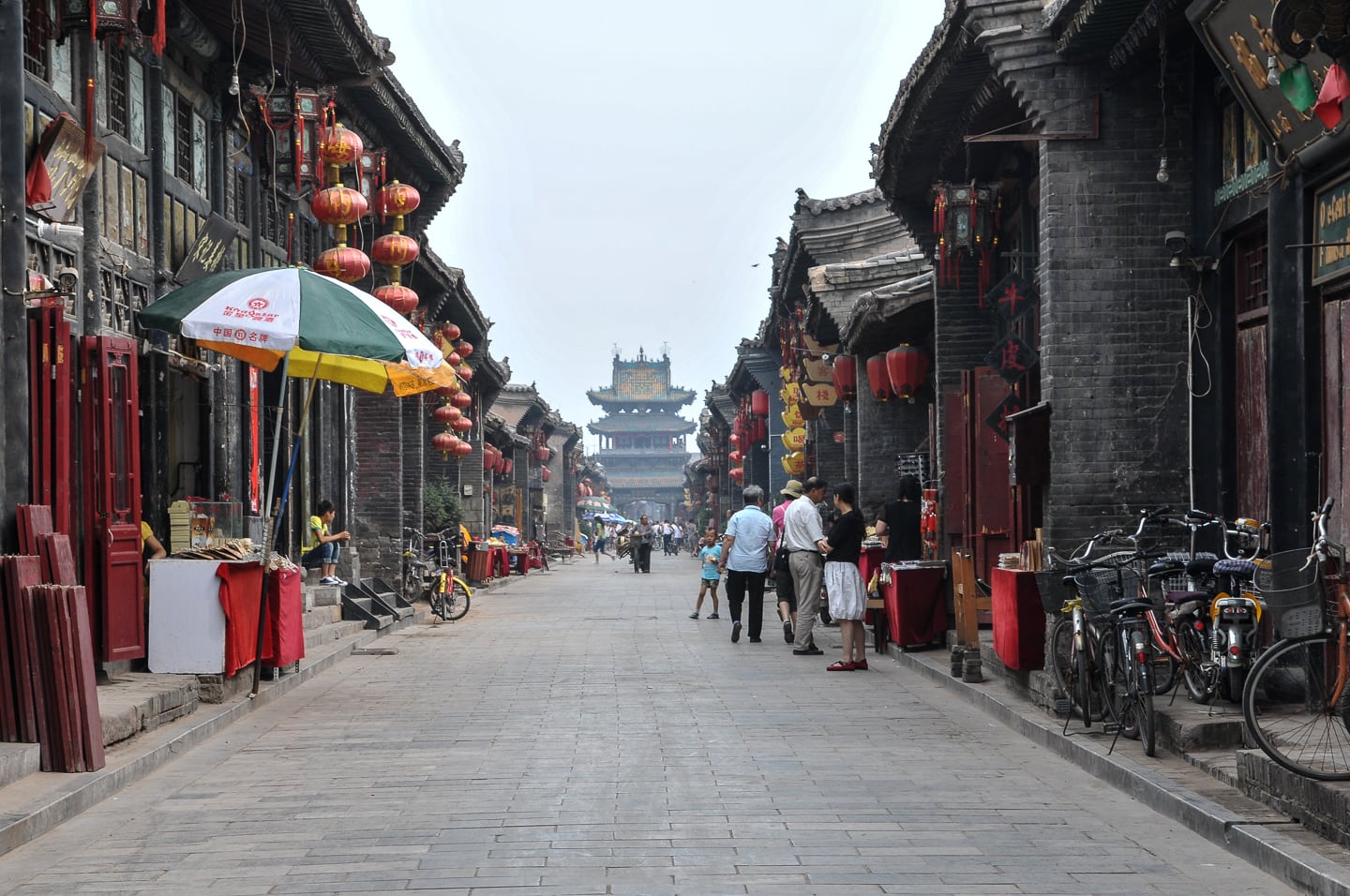 Our Favorite Things to Do in Pingyao:

+ Stroll the two main streets in the evening

+ Have beers during Happy Hour (2 for 1) on the outside picnic bench at Harmony Guest House (where we stayed) and people watch (get your beers at Harmony instead of Cozy Bar (also owned by the Harmony people), the beers are much bigger for the same price).

+ Explore the more obscure historical sights of Pingyao — the two temples near the Catholic church are serene and off the beaten path; the museums were moderately interesting, but get old quickly after you’ve seen one or two.

+ Walk the wall which encircles the city at sunrise/sunset — we did walk the wall, but at midday. Like most things in China, no re-admittance to sights permitted with one ticket.

+ Get lost in less-traveled part of town

One of the most common sights (and smells) in Pingyao (and all over China) is tofu cart man. I don’t have any photos of tofu cart man, unfortunately, only the lingering memory of the stench of his cart that can never be erased. You know from a mile away when tofu cart man is approaching for two reasons: He usually has a very, very loud bullhorn attached to his cart with a special recorded message set to loop, extolling the virtues of skanky smelling burning soy product; AND his product smells incredibly skanky. I mean, really skanky. I’m not quite sure what they do to the tofu that gives it its trademark skank, but they reek…they ALL do. Yet, somehow tofu cart man gets people to bolt out of their houses and shops as he approaches, eager to buy his repulsive snack. Perhaps this is the real reason why people in China wear surgical masks? Perhaps the stinky tofu chunks are infused with some highly-addictive narcotic that renders the horrendous order powerless against those with the itch. We may never know…

At the risk of sounding corny and cliche, Pingyao at night is captivating. The two bustling main streets are lined with brilliantly lit courtyard restaurants strewn with red lanterns. Merchants have moved their products outside, and various food carts also dot the roadside. The atmosphere is lively but low-key against a medieval Chinese backdrop. Best of all, they close off the street to motorized vehicles!!!

The THING to buy in Pingyao are what are called “paper cuts,” which are intricately hand-carved pieces of decorative paper. It’s fascinating watching a paper cut artist at work and the end product, if done well, is masterfully detailed. 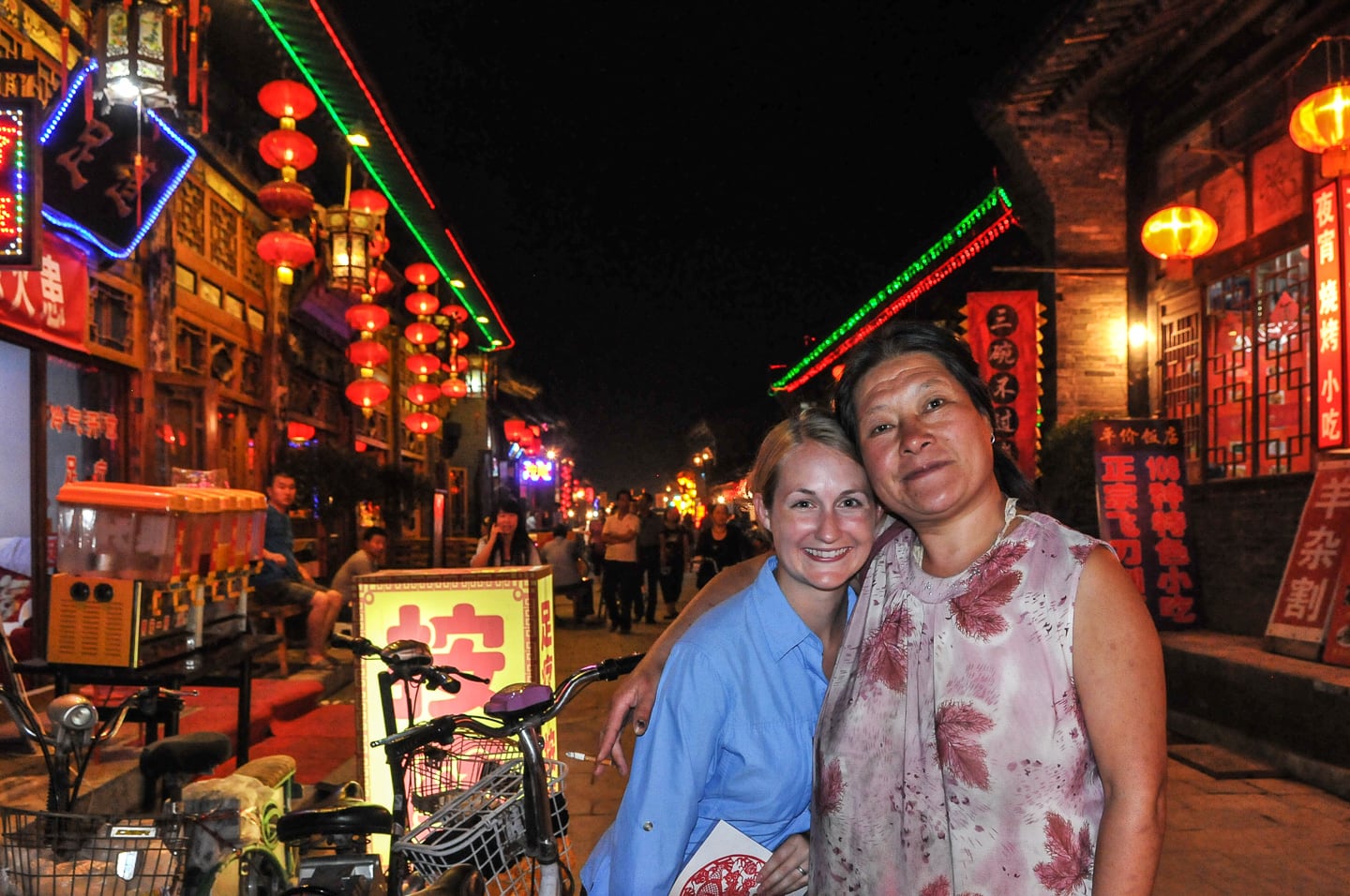 As is frequently the case in China, people love to take photos of foreigners (and especially have their photo taken with them/us). This photo came about as I was taking a photo of Lori one evening and a random woman whom we had never seen before stepped into the photo and said “take picture!” 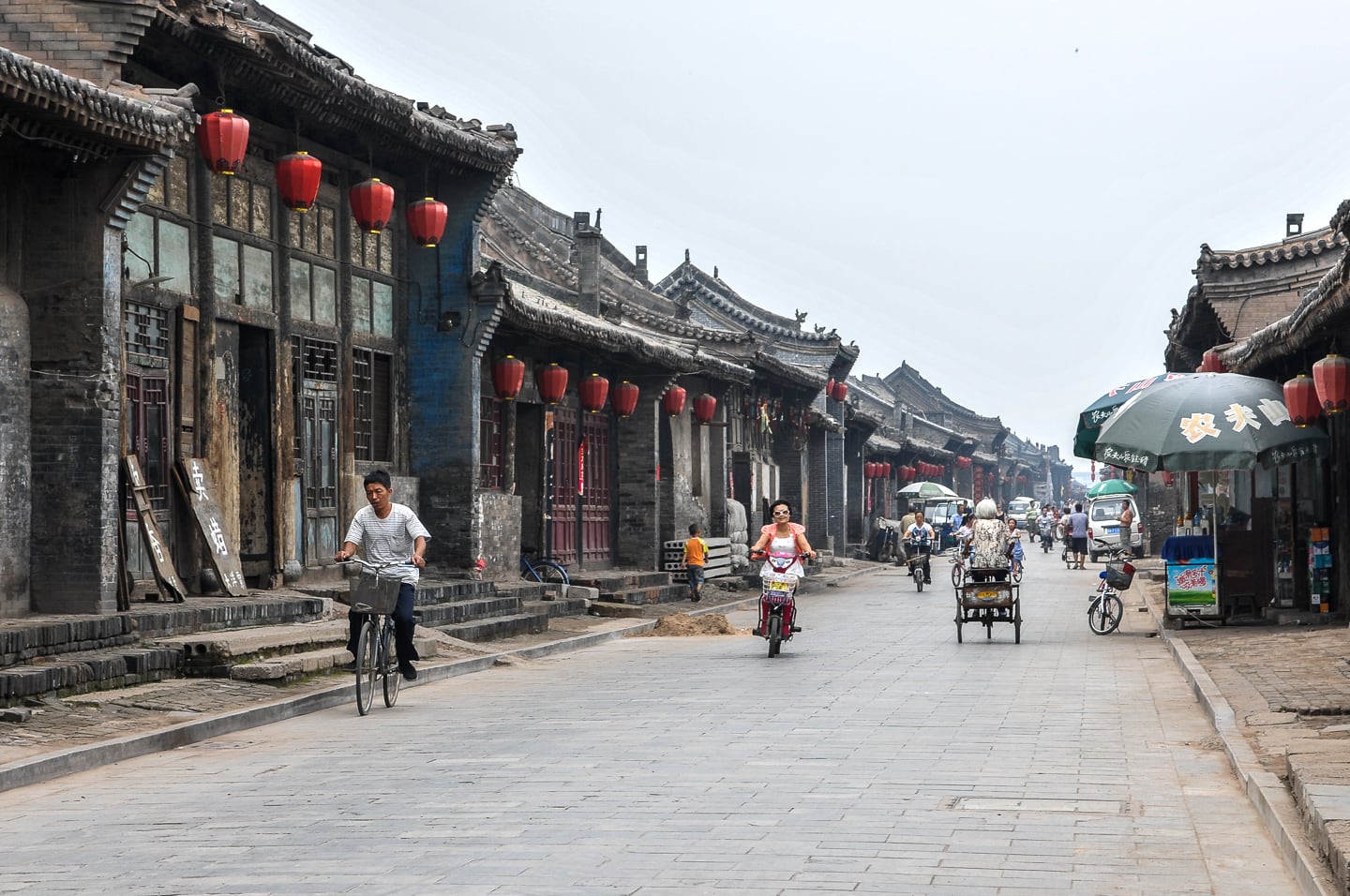 Due in large part to Pingyao’s designation as a UNESCO World Heritage site, there are strict regulations governing construction and renovation within the old city walls. Construction must utilize techniques of the time period and render an authentic looking end result. Shops, restaurants and guest houses on the main two streets are very well maintained, and decorated to appeal to tourist sensibilities. However, just a few steps in any direction away from these main roads treats you to a Pingyao in which little has been restored or changed in centuries. Much more of the walls and sagging roofs are likely original, dating back a few Dynasties. These parts of the city are where life continues very much separately from the hustle and bustle and watchful eye of tourists. For this reason, the side streets of Pingyao are quite fascinating in themselves. 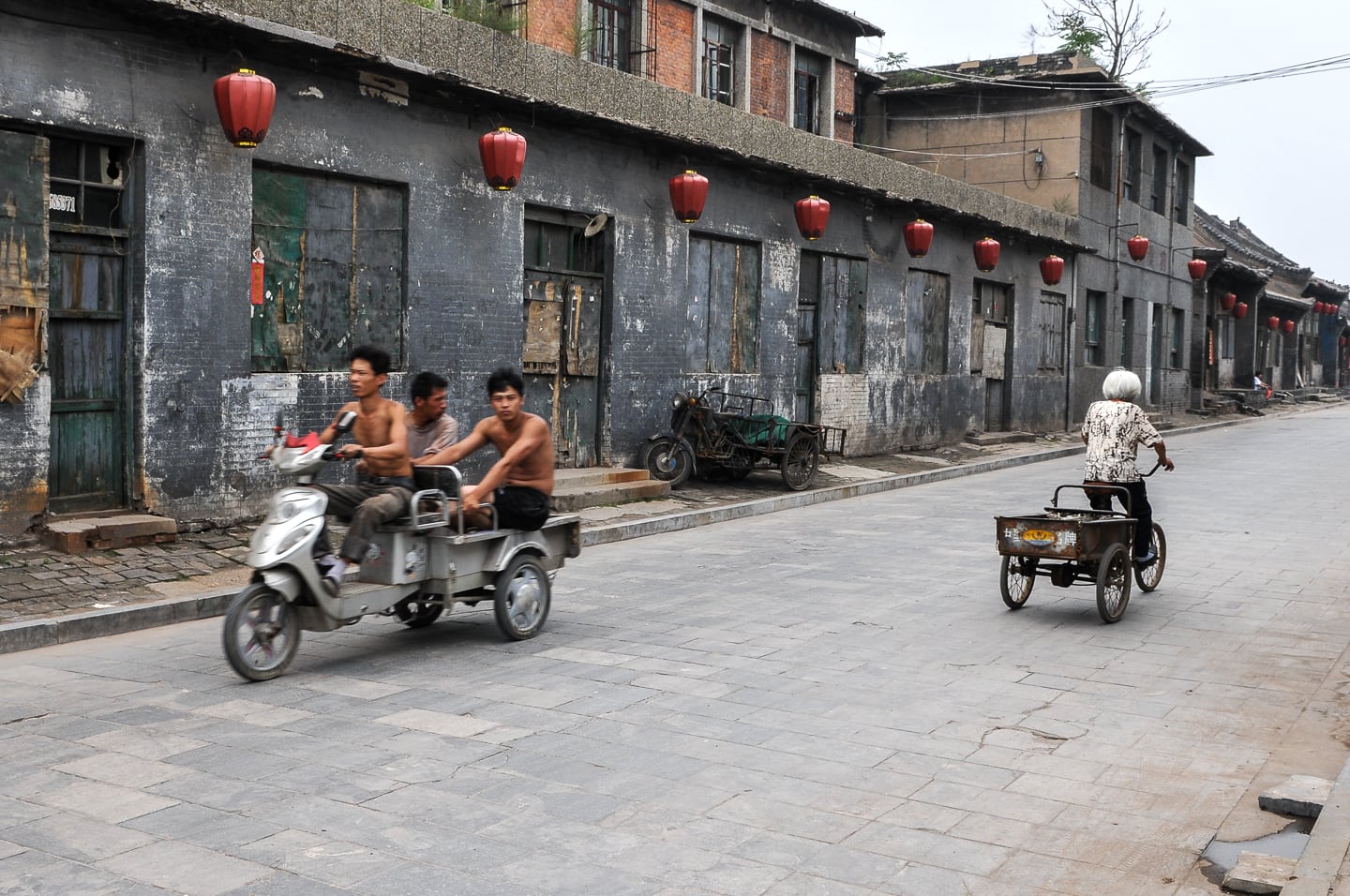 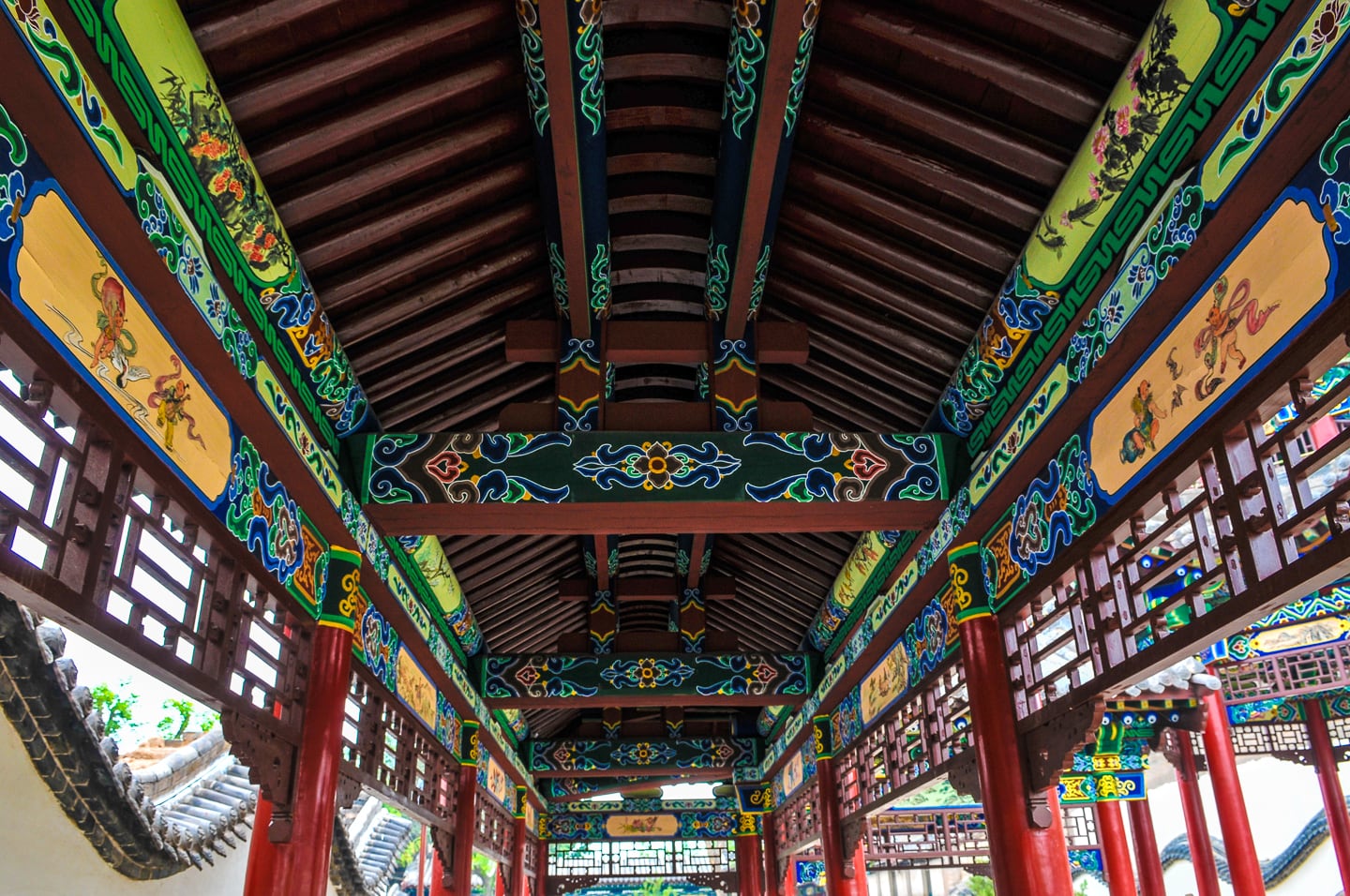 We stayed at Harmony Guesthouse which, for foreigners, is really THE place to stay. Yamen International Youth Hostel also seemed very good (and gets good reviews), but we preferred the serenity of our quiet room in the new annex (not the Cozy Bar annex, but the one around the corner and down the alley). Harmony is a family-run guesthouse as well and has a unique vibe as a result. The husband and wife who run the place are friendly (if in an edgy/pushy sort of way) and speak excellent English. Both Harmony and Yamen arrange trips to other sights in the area. We went with a Yamen tour because it was cheaper but regretted not going with Harmony because our driver/guide spoke no English.

On the whole, we were very happy with our choice of accommodation. Our room was very small, but very tidy with a lot of places to place things. We had paid the additional cost for air-conditioning, and the first evening was very hot. But, as is often the case in Pingyao, the power went out for a long while during the night. Some of the nicer guest houses have generators, but ours did not. What was even more frustrating is that the guest house had the main courtyard structure and two annexes (one atop the Cozy Bar) and one down a nearby alleyway where we stayed. Often, the power would stay on in the main guest house but shut off in the annex. It improved during our time there, but made for an uncomfortable first night. We’ll expand more on our stay at Harmony when we finally get to posting lodging reviews…one of these days.

Ending on a random note, a traveler (presumably from Russia or another Eastern Bloc country) had left this empty bottle of vodka behind at Cozy Bar, named after the well-known Soviet-era assault rifle. Some killer stuff, I’m sure. 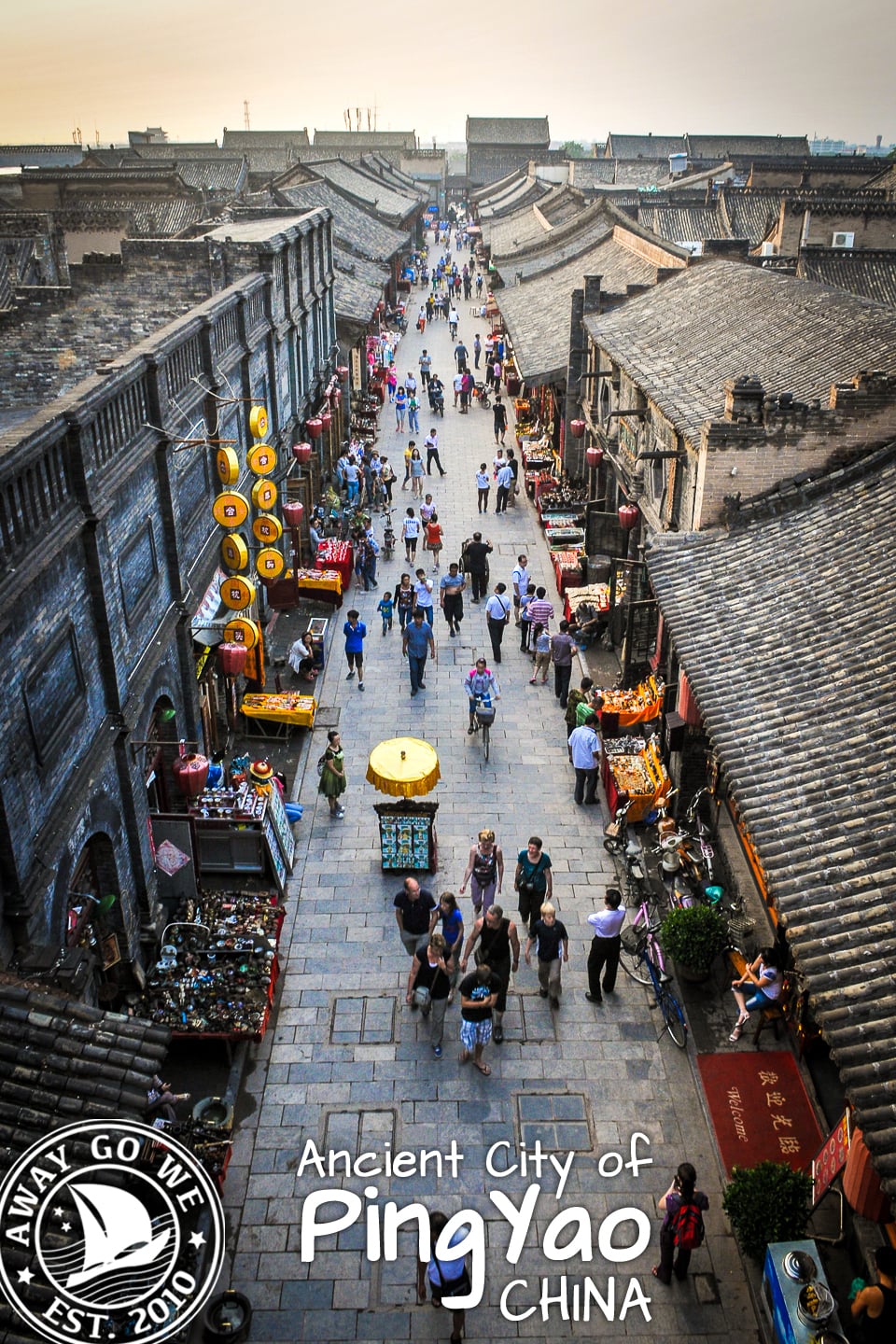 I know what gives the stinky tofu its smell. It is the microbes. Stinky tofu are basically fried fermented tofu, and it is the microbes that give its distinct aroma. This is definitely an acquired taste and not all Chinese love it. Some are repulsed by it. On this note, I recently read that scientist in Japan discovered that Japan’s own version of stinky tofu can be improved by polluted Chinese air floating through Japan.