We Get the Tomb Raider Temple to Ourselves! Angkor’s Ta Prohm

Ta Prohm, Angkor’s otherworldly Jungle Temple made famous by the movie Tomb Raider, is even more eerie when explored in the time of Covid.

Fresh on the heels of exploring Angkor Wat and having the world-famous 900-year-old temple virtually to ourselves, we hop back on the remorque to explore our second Angkor archeological site of the day: Ta Prohm.

Angkor Wat might be the most famous and most significant site in all of Angkor, but many millions more people have probably seen Ta Prohm.

If you’ve kept up with the movie blockbusters of the past two decades, chances are that means you too!

For more on what brings our expat family to Siem Reap in the time of Covid (and how this major tourist city is fairing these days), read this post.

After leaving the deserted parking, we’re accosted by a large gathering of… 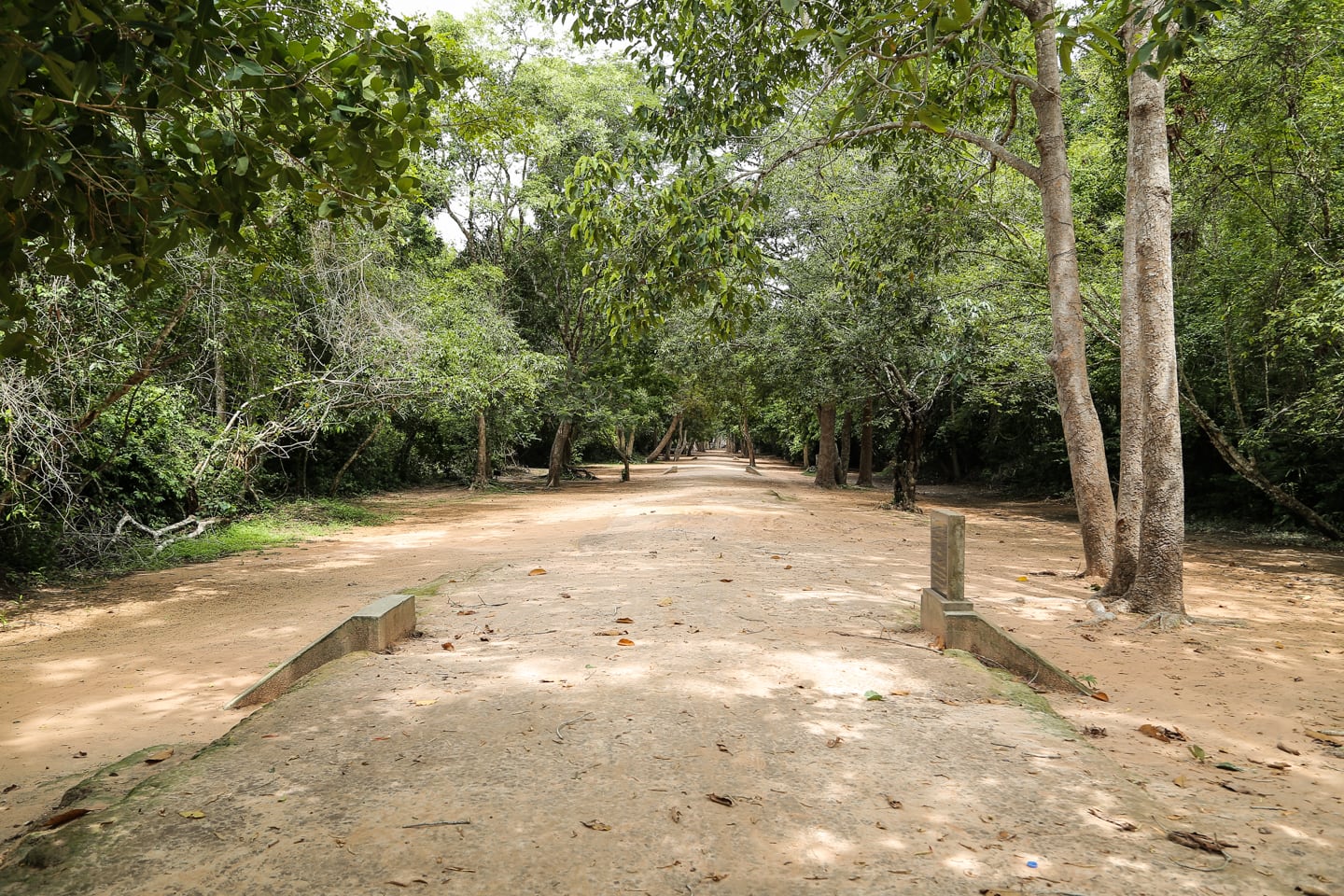 Looks like it’s going to be another quiet self-guided tour of a major UNESCO site.

Ta Prohm is a special place. It is unique among the temples of Angkor for its unsettling, seemingly neglected state, having remained in more or less the same condition in which it was rediscovered centuries after the fall of the Khmer Empire.

Unlike the majority of the temples of Angkor, the park authorities have made an exception not to restore this particular site, owing to the unique way in which the site and surrounding jungle have merged over the centuries.

However, for our sake and everyone else’s who visits the site, ongoing efforts have been made to securely stabilize the ruins.

Constructed in the late 12th and early 13th century as a royal monastery, Ta Prohm is most famous today for two reasons—

—for it’s eerie and evocative setting in which the towering silk cotton trees and creepy strangler figs of the surrounding jungle have begun to reclaim the site;

—and for featuring prominently in the 2001 blockbuster film, Lara Croft: Tomb Raider. 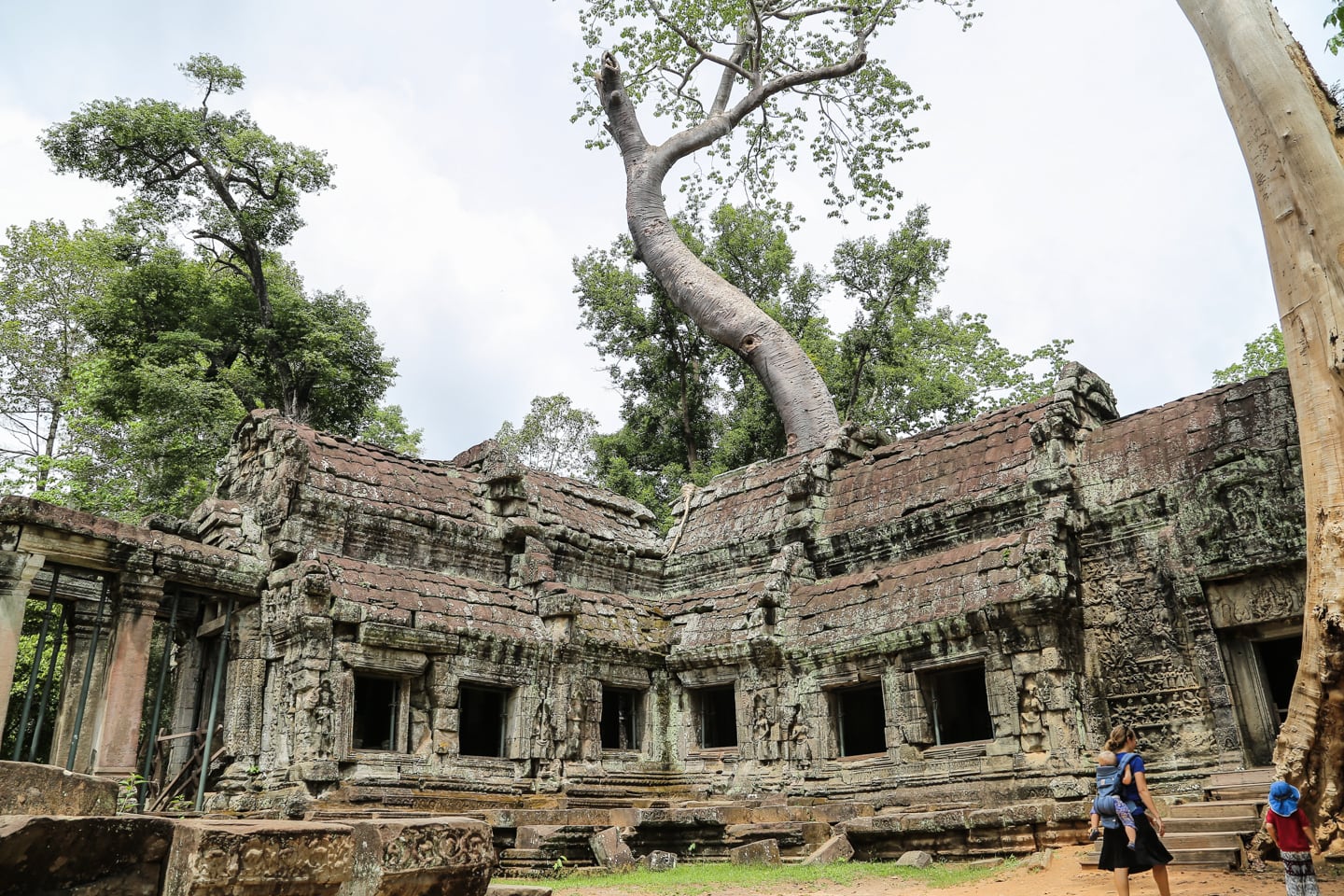 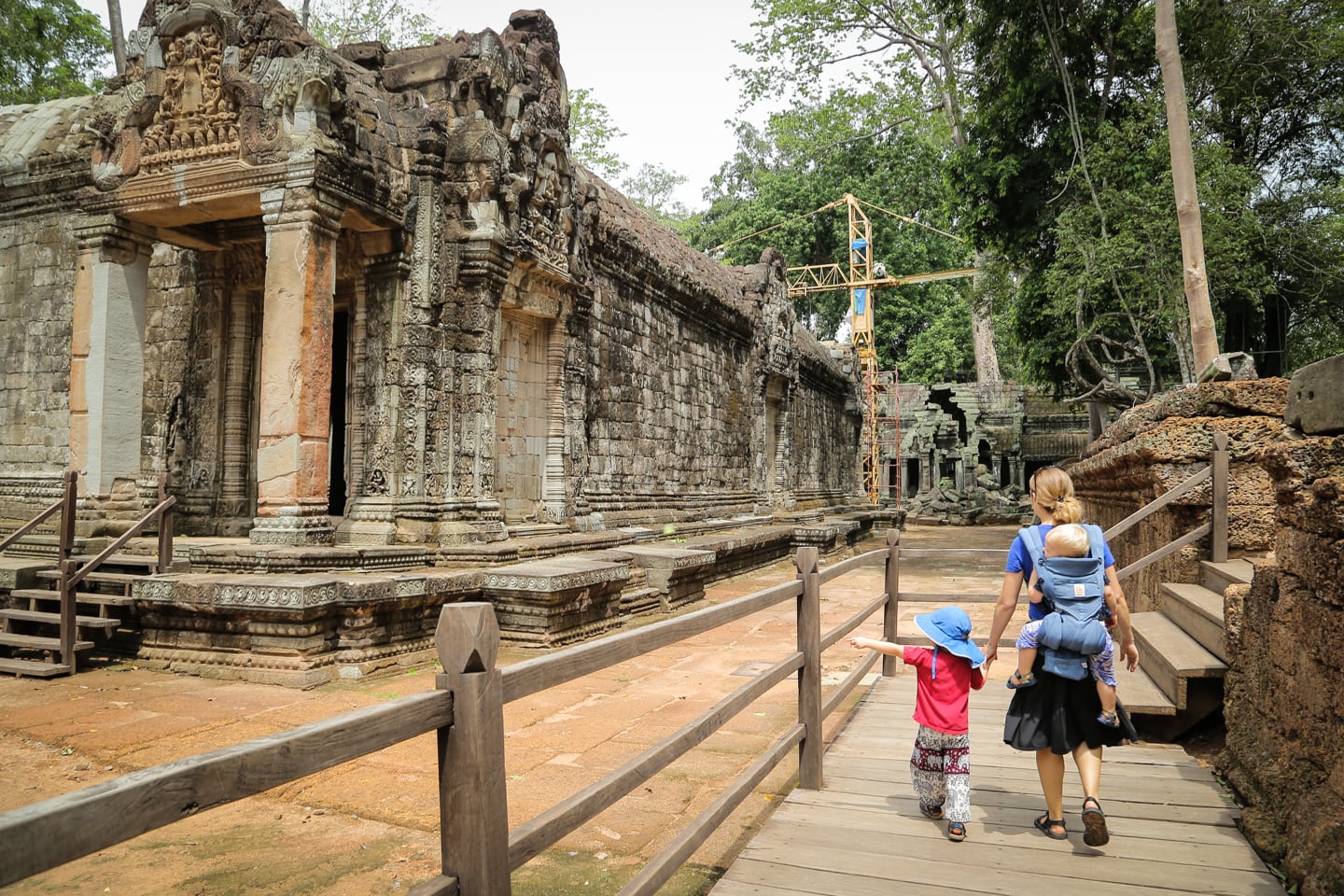 Due to the temple’s more advanced state of decay, walkways and platforms have been constructed throughout the site to mitigate the impacts of large numbers of visitors.

We find ourselves alone in the temple for much of our visit, but for a handful of locals we spot from afar on a couple of occasions. 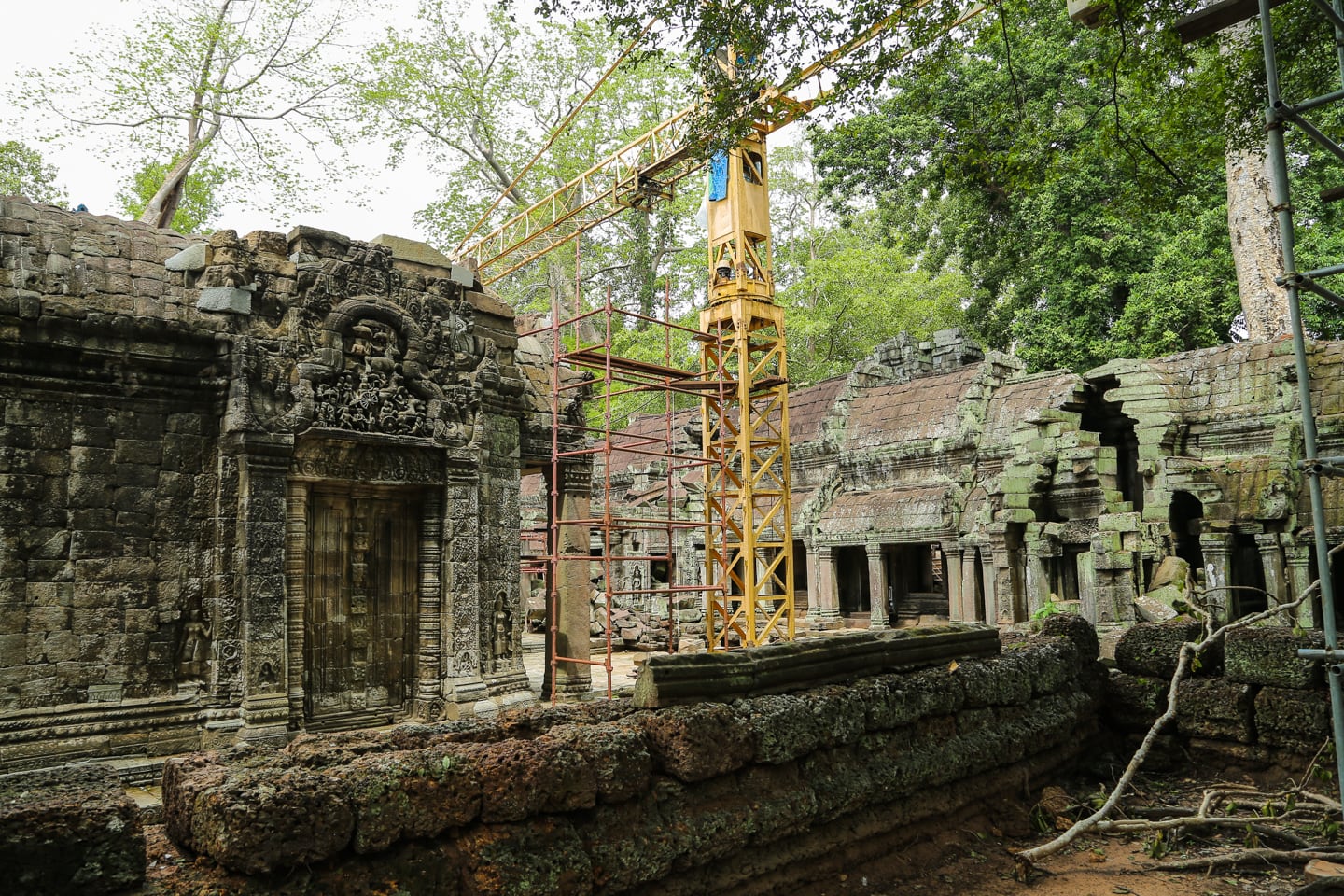 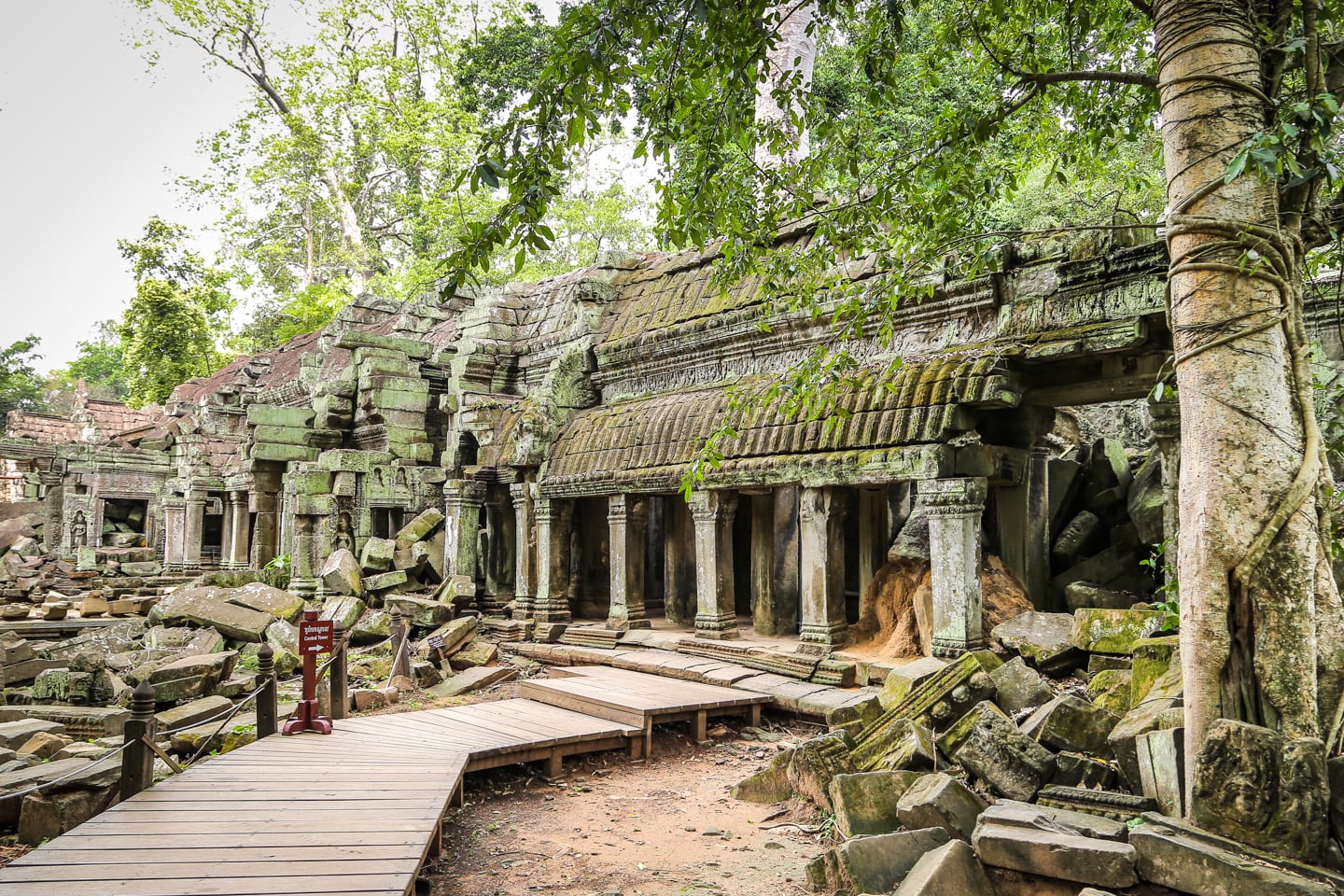 Throughout our visit, Noe regularly vents his concern and frustration with the temple, repeating, “Oh no, daddy! This temple is BROOOOKEN!!!” “Why is this temple BROOOOKEN!?” and “Oh no, they need to FIX IT!!!”

In response to his initial comments, I try to explain that this place is very, very old, and that old buildings fall apart over time if they aren’t cared for, how the jungle has moved back in because people moved out, etc., etc.

When that failed, I attempt to address his concerns from the angle of finding beauty in old and broken things, etc., etc.,  with the same result, of course.

Ultimately, I’m forced to come to terms with the fact that my almost-four-year-old sees the equivalent of a Lego masterpiece that has been kicked over by his baby brother and is in urgent need of repair.

I certainly can’t blame him. 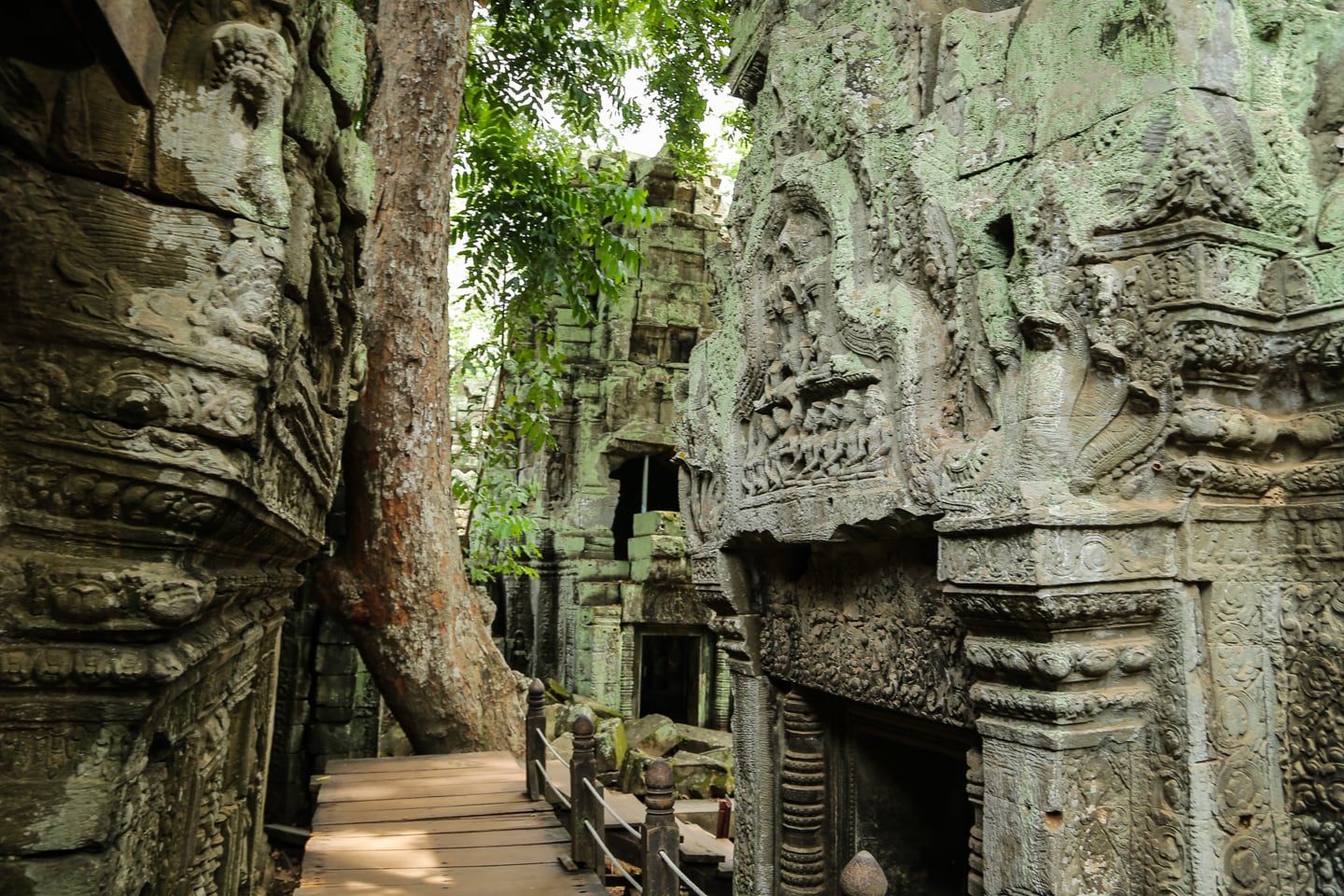 Despite the ruined state of much of the surrounding structure, there are a great many structures that remain in surprisingly good shape, despite the harsh natural conditions and the passage of time. 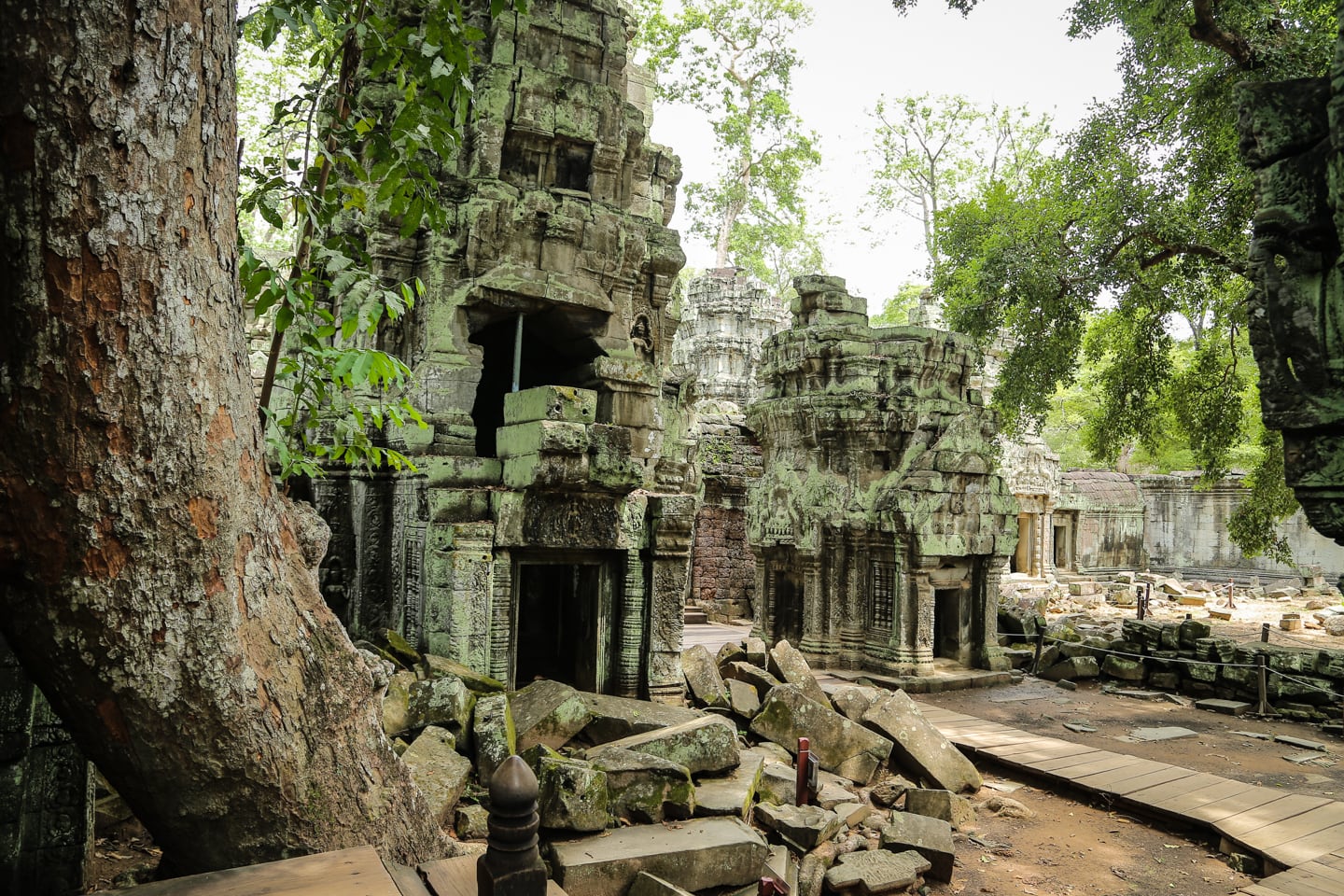 But the star of the show here at Ta Prohm isn’t the ancient stone structures. In Angkor, those are a dime a dozen.

Nope, the real draw of this complex are the enormous trees that have taken up residence alongside the temple structures (and in many cases, swallowed them whole). 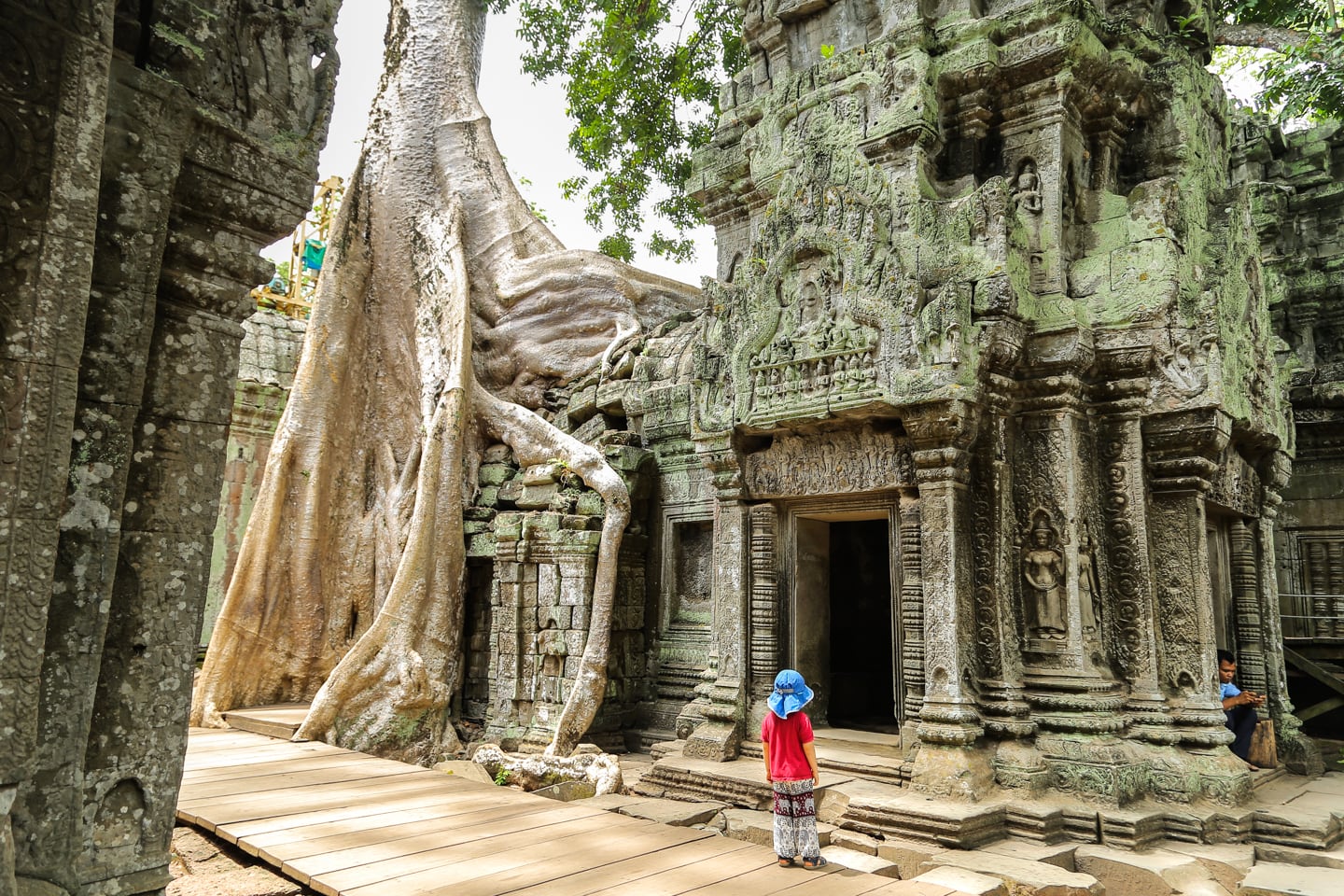 …a particularly Buddhist testament to the fleeting nature of worldly pursuits and even reincarnation — everything created by the hands of humankind will eventually return to nature long after our time as a species has expired, and new life will grab hold and continue to flourish in our absence.

That is, assuming that our species doesn’t completely destroy the natural world before then. 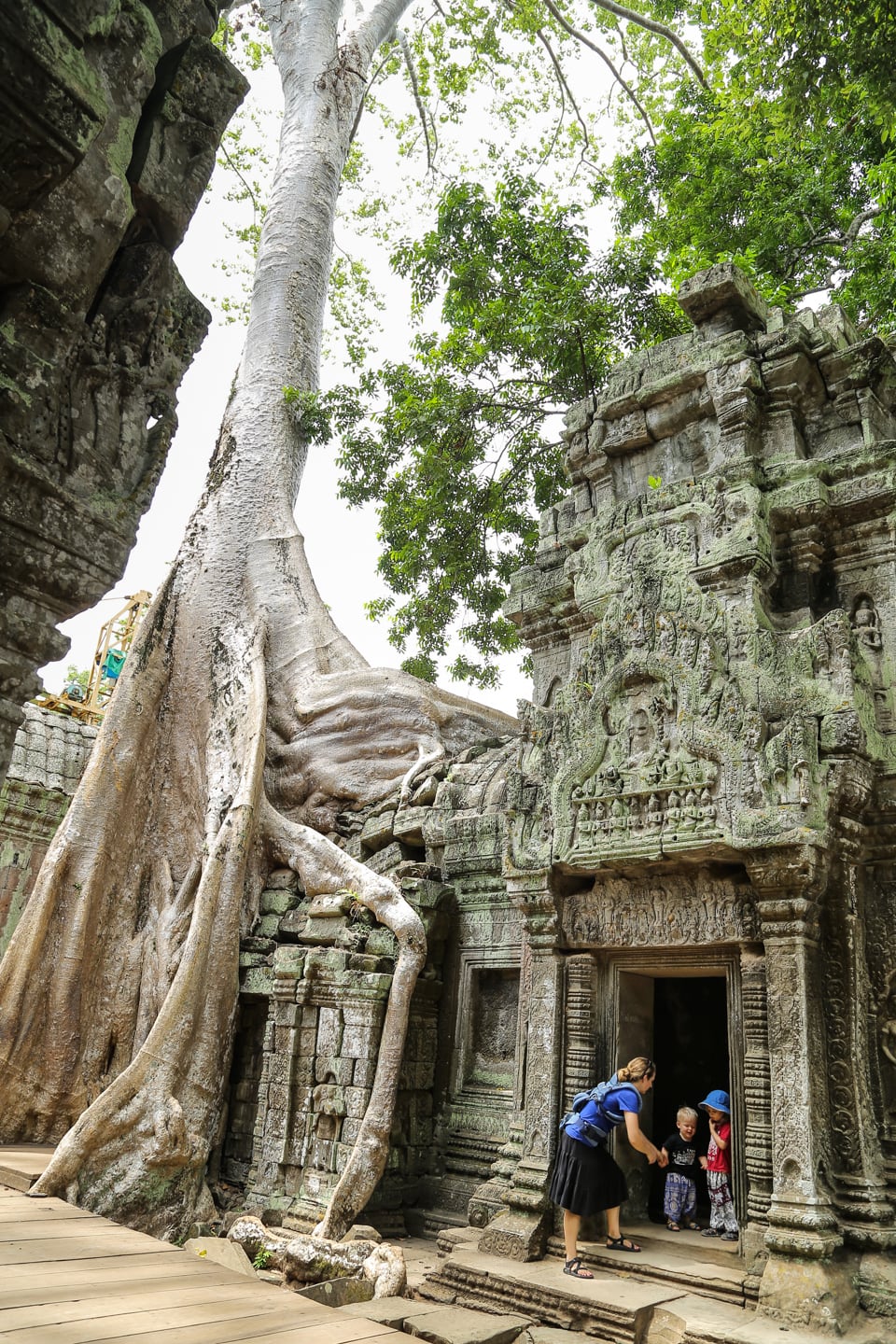 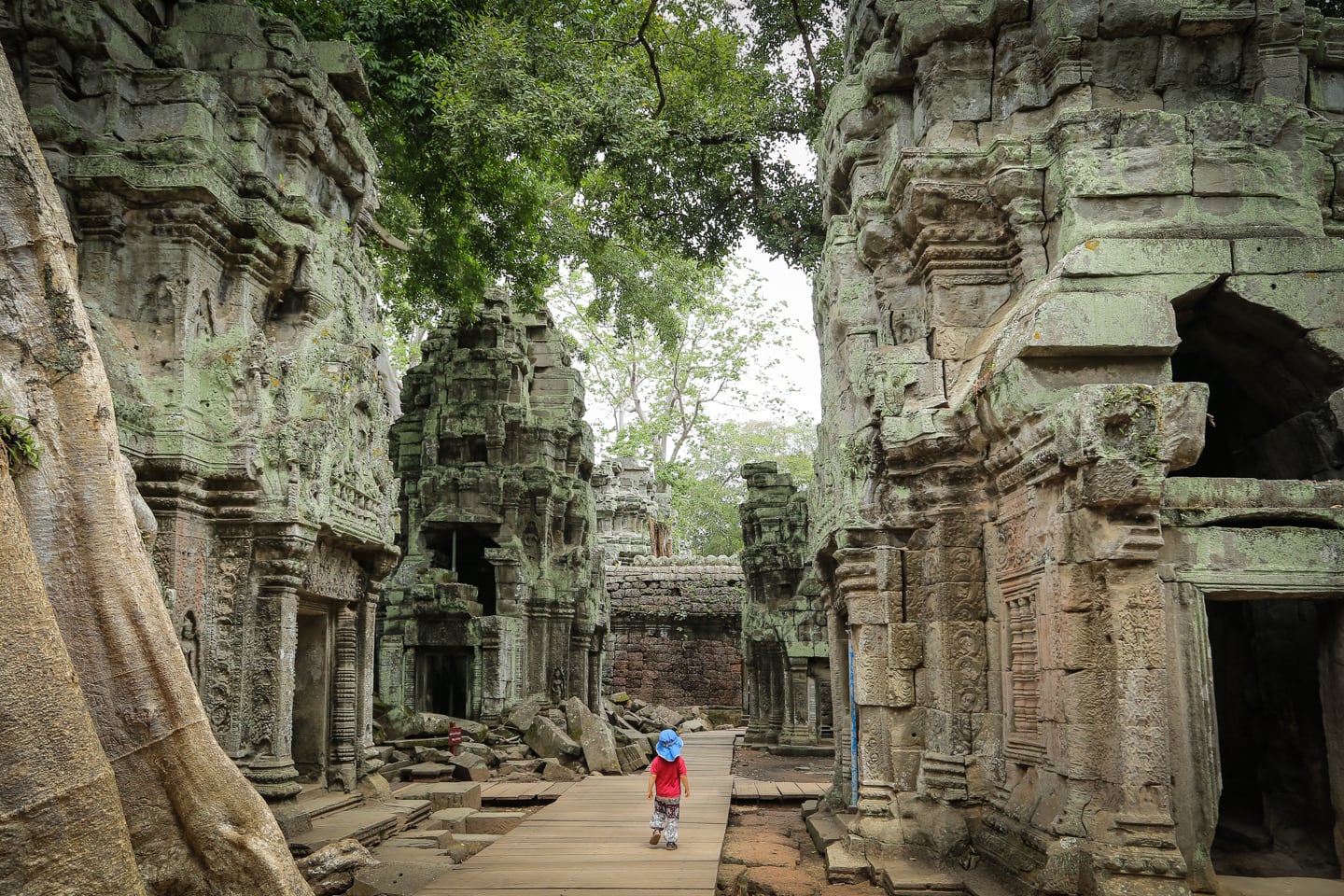 One of the best things about the temples of Angkor is there is no shortage of interior passageways to explore.

Riley’s too young to appreciate a place like this, but Noe’s like a kid in a candy shop (or in Noe’s case, a kid in a fruit market, I guess).

And daddy, as well. 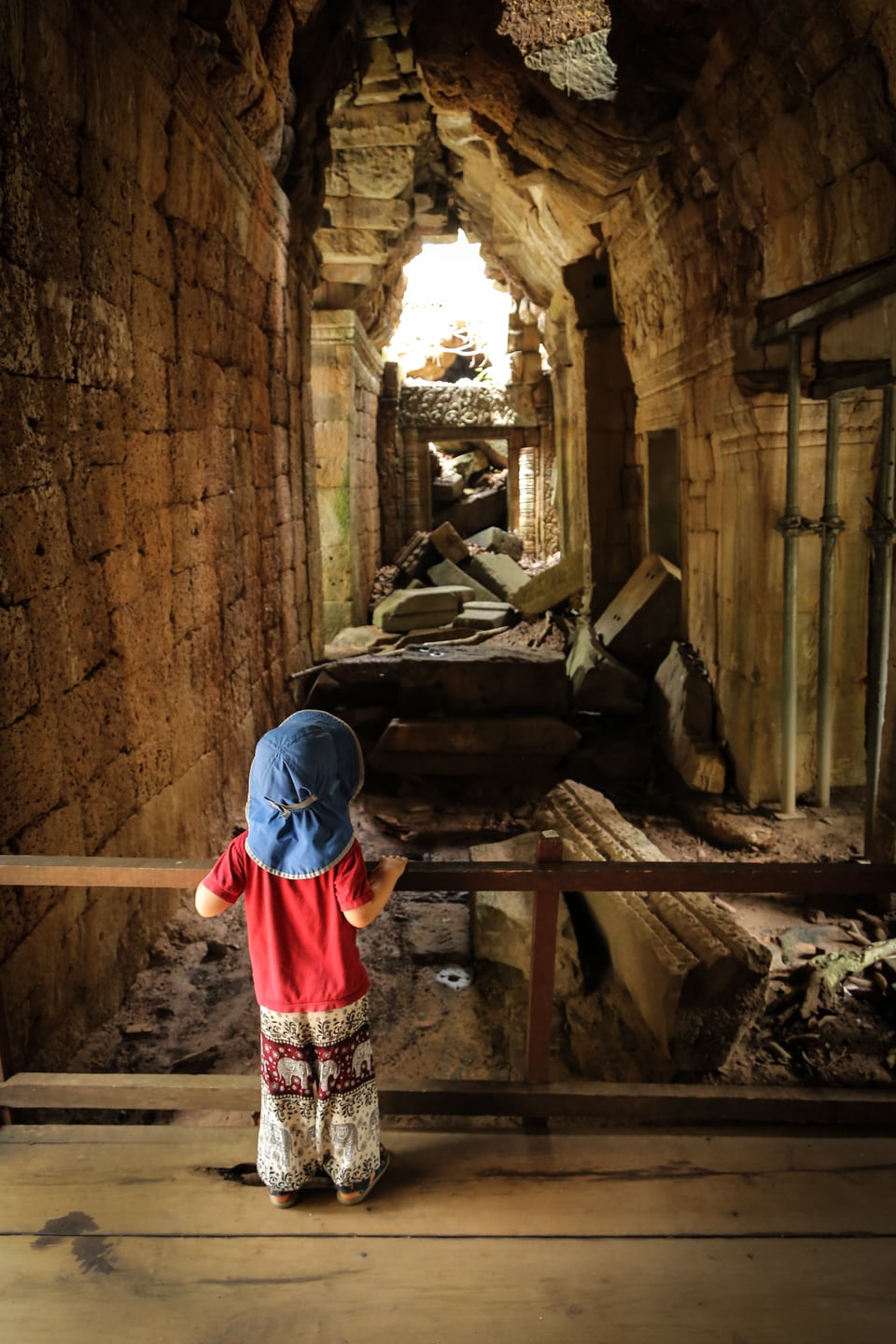 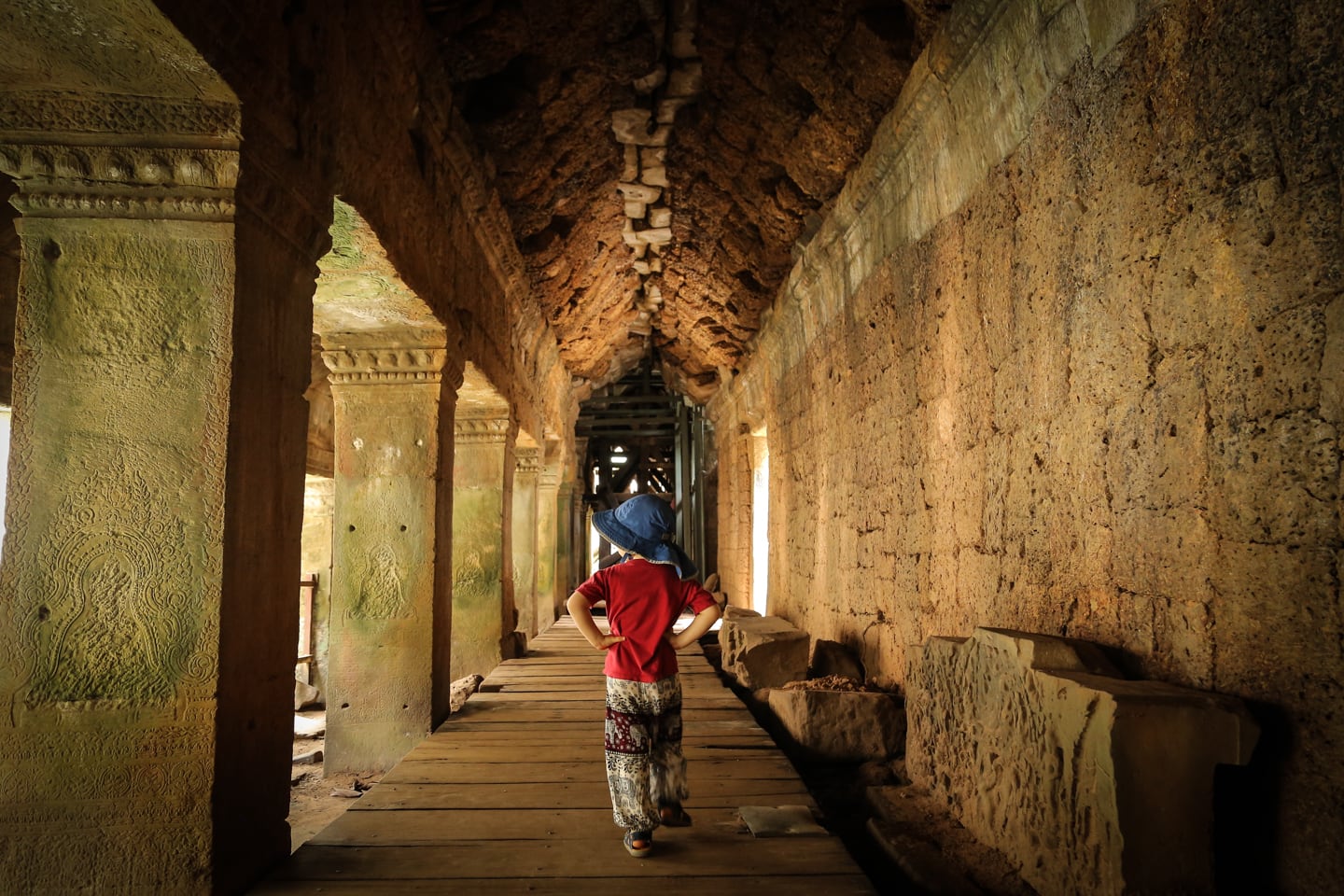 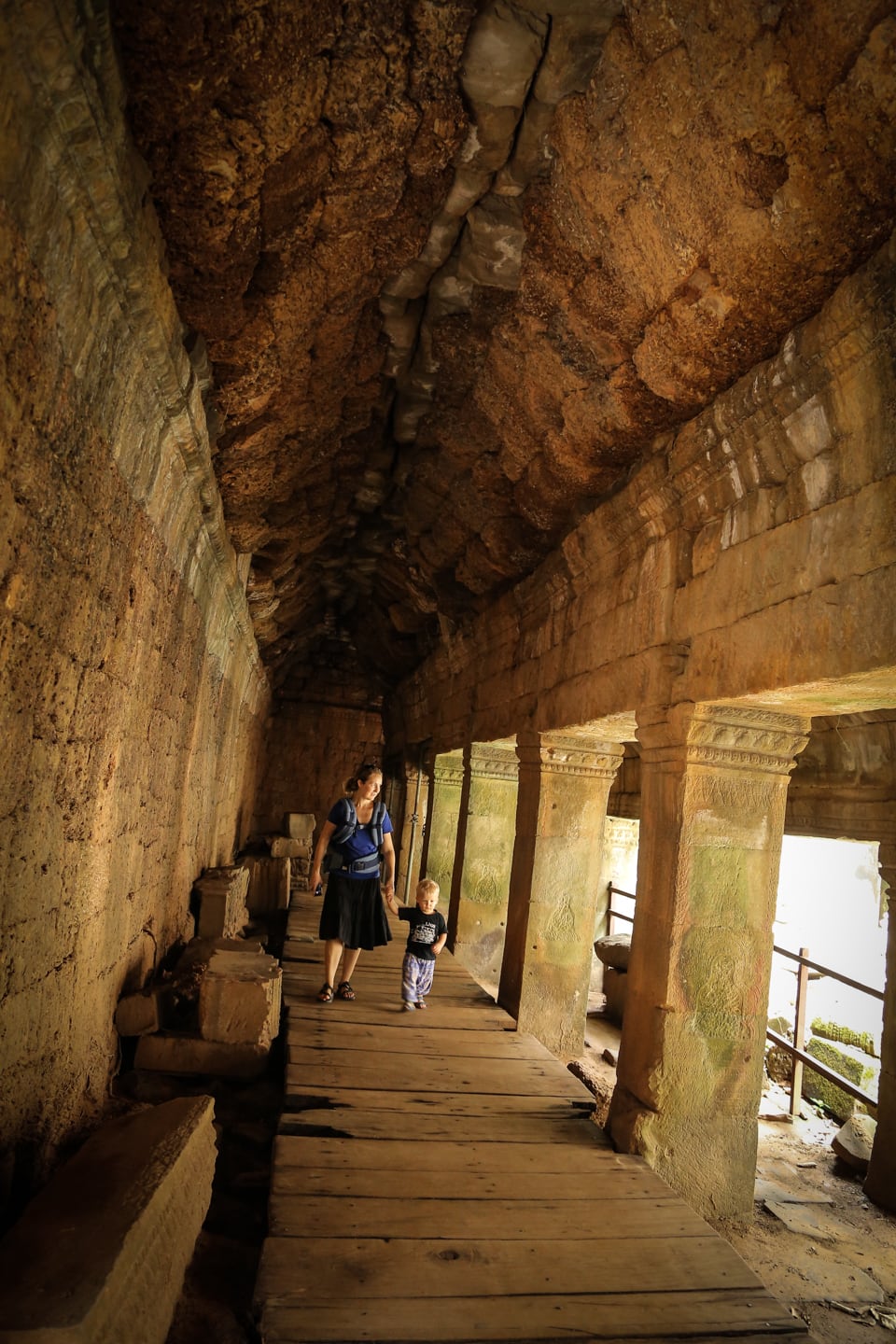 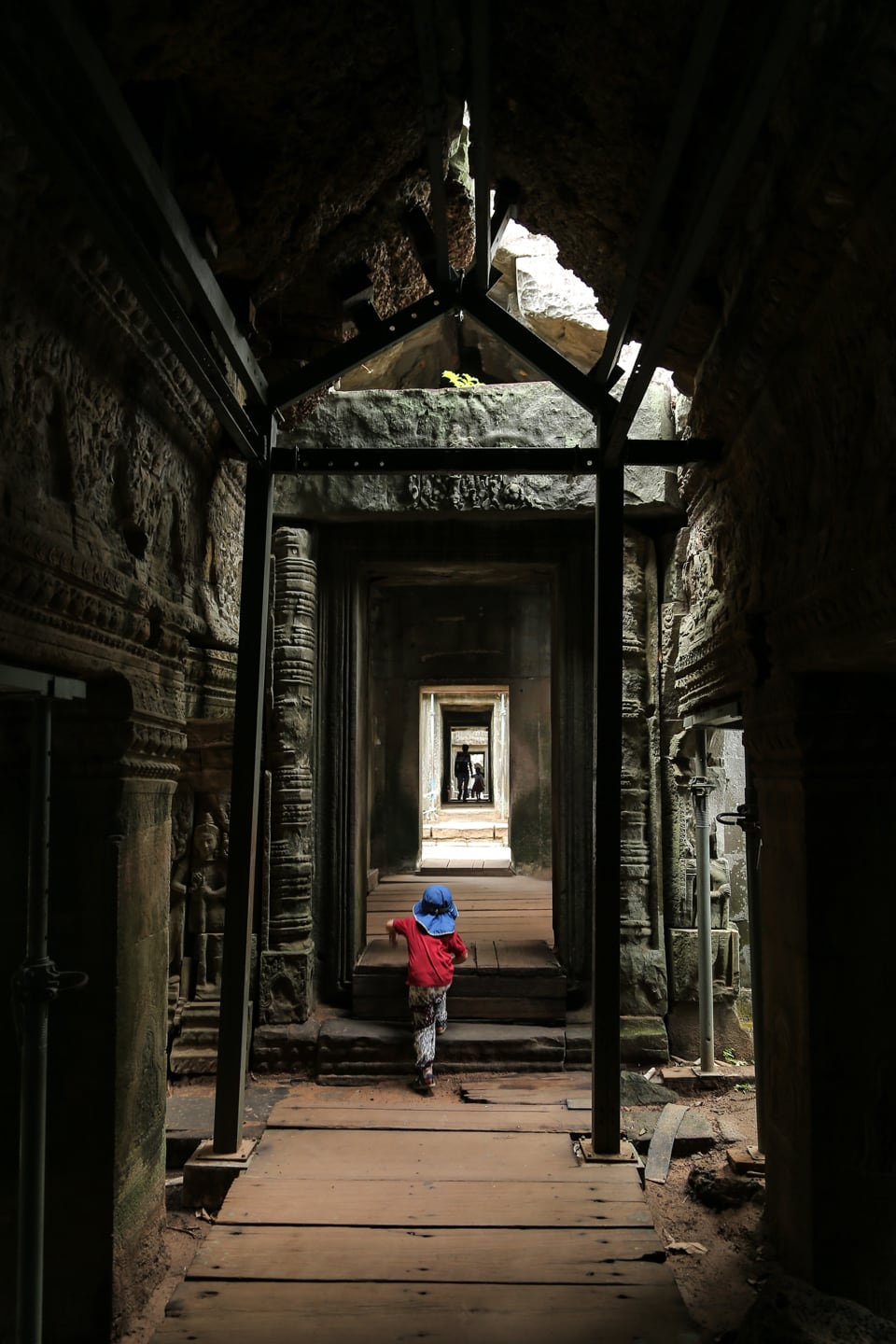 Lori and I visited Ta Prohm in 2012 during our first visit to Cambodia. But they were still in the process of building much of the network of walkways that you see in these photos.

The site this time around is far more evocative and photogenic with the bulk of the construction equipment and scaffolding removed. 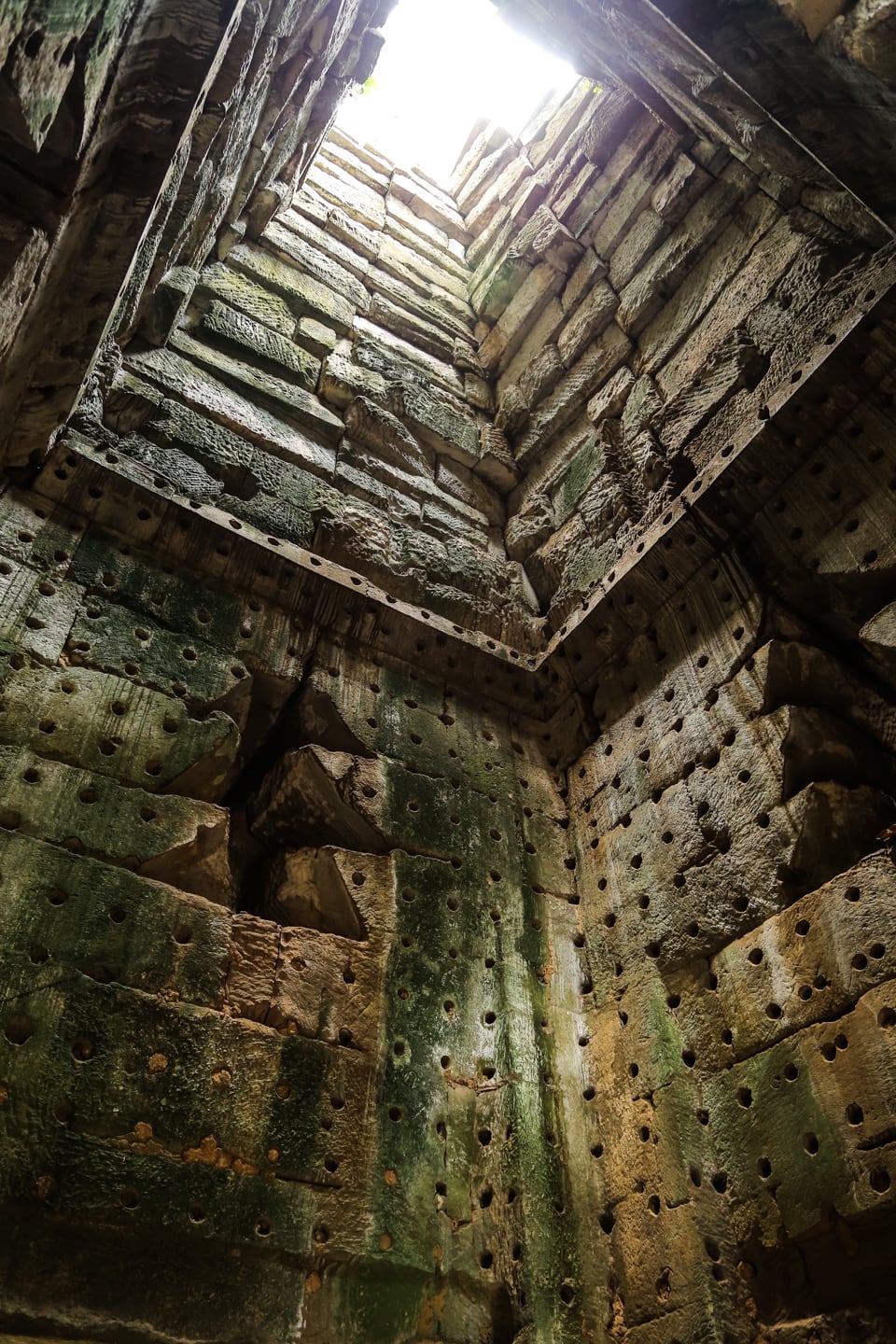 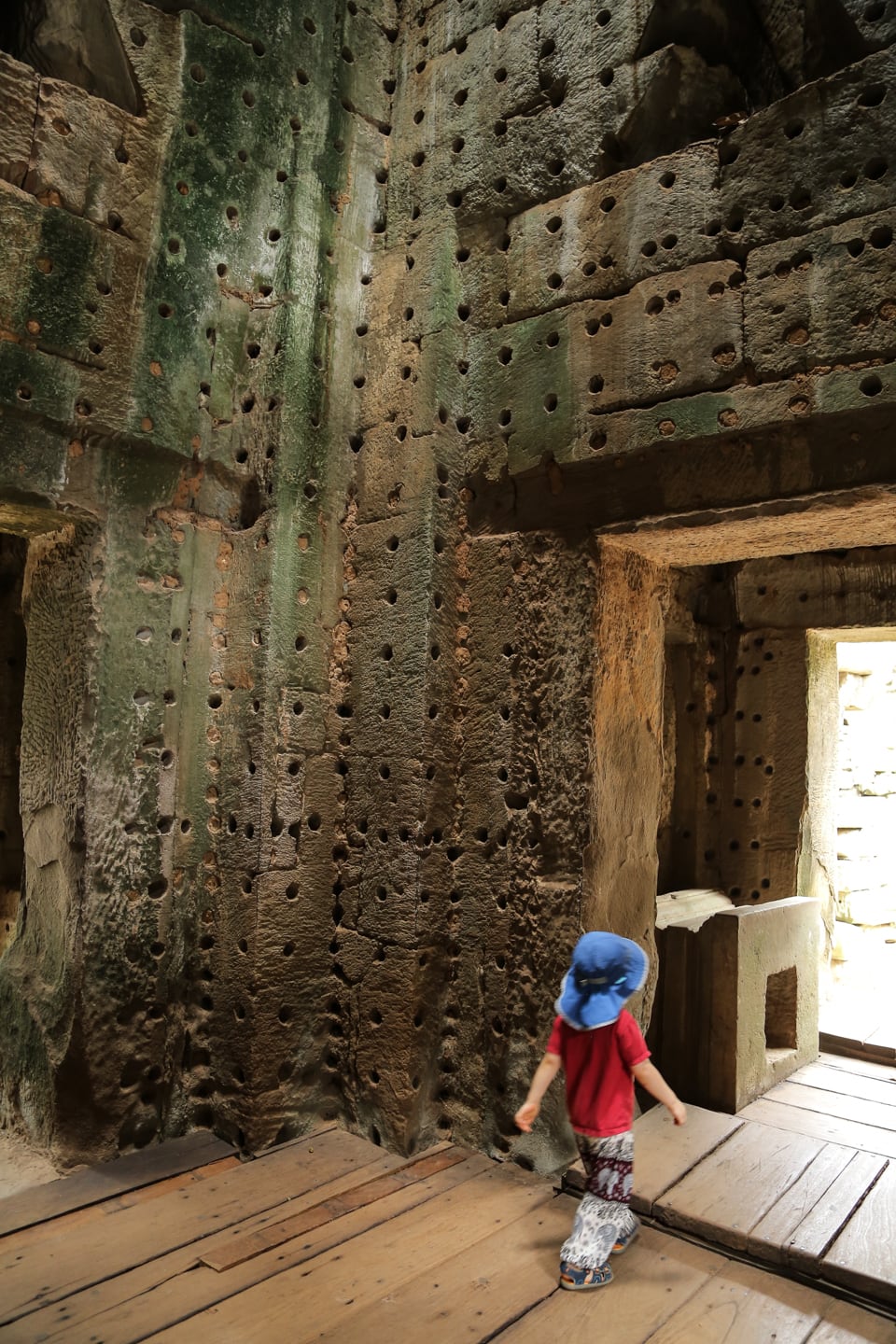 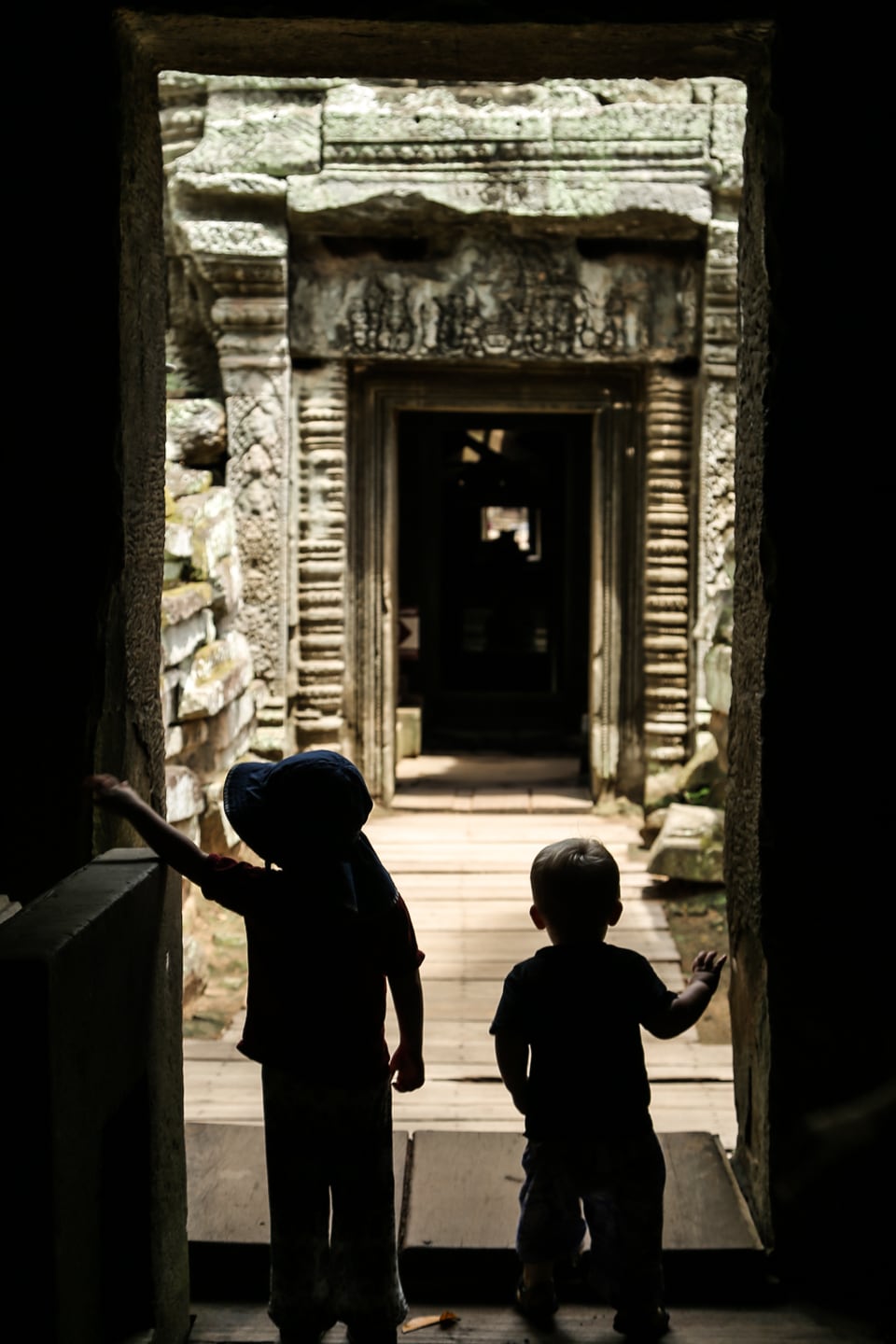 Have you ever seen a massive jungle tree devouring an ancient stone temple? 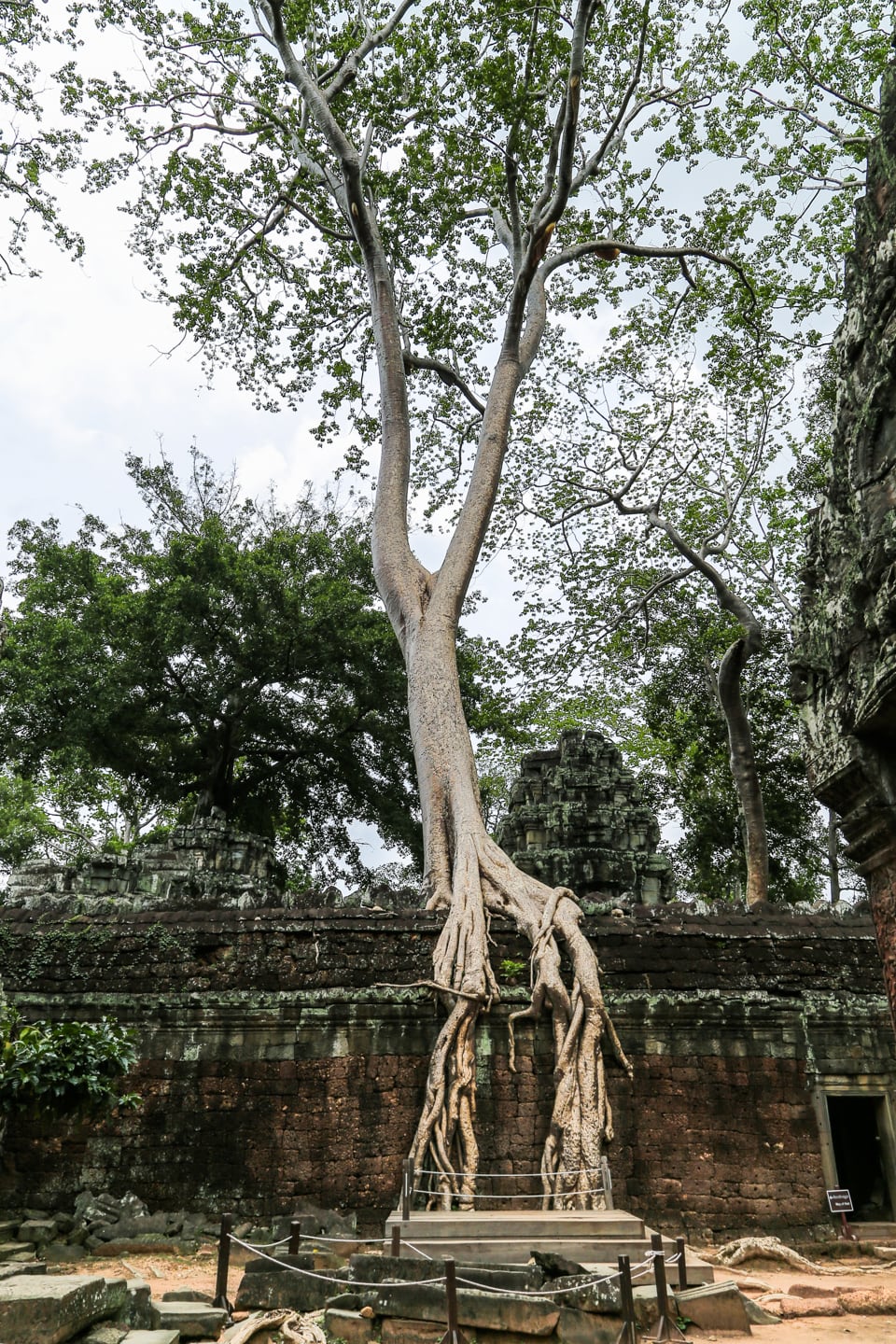 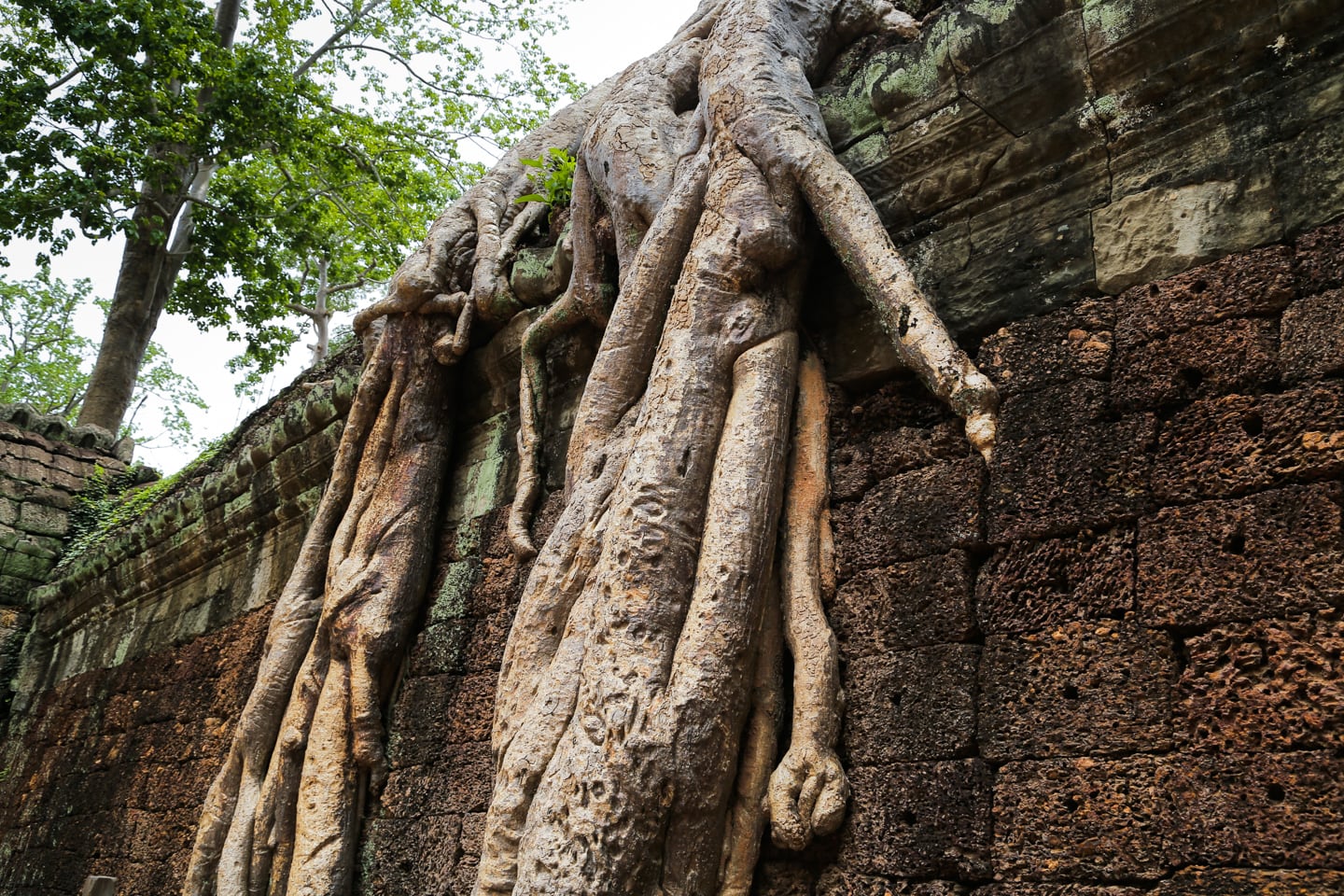 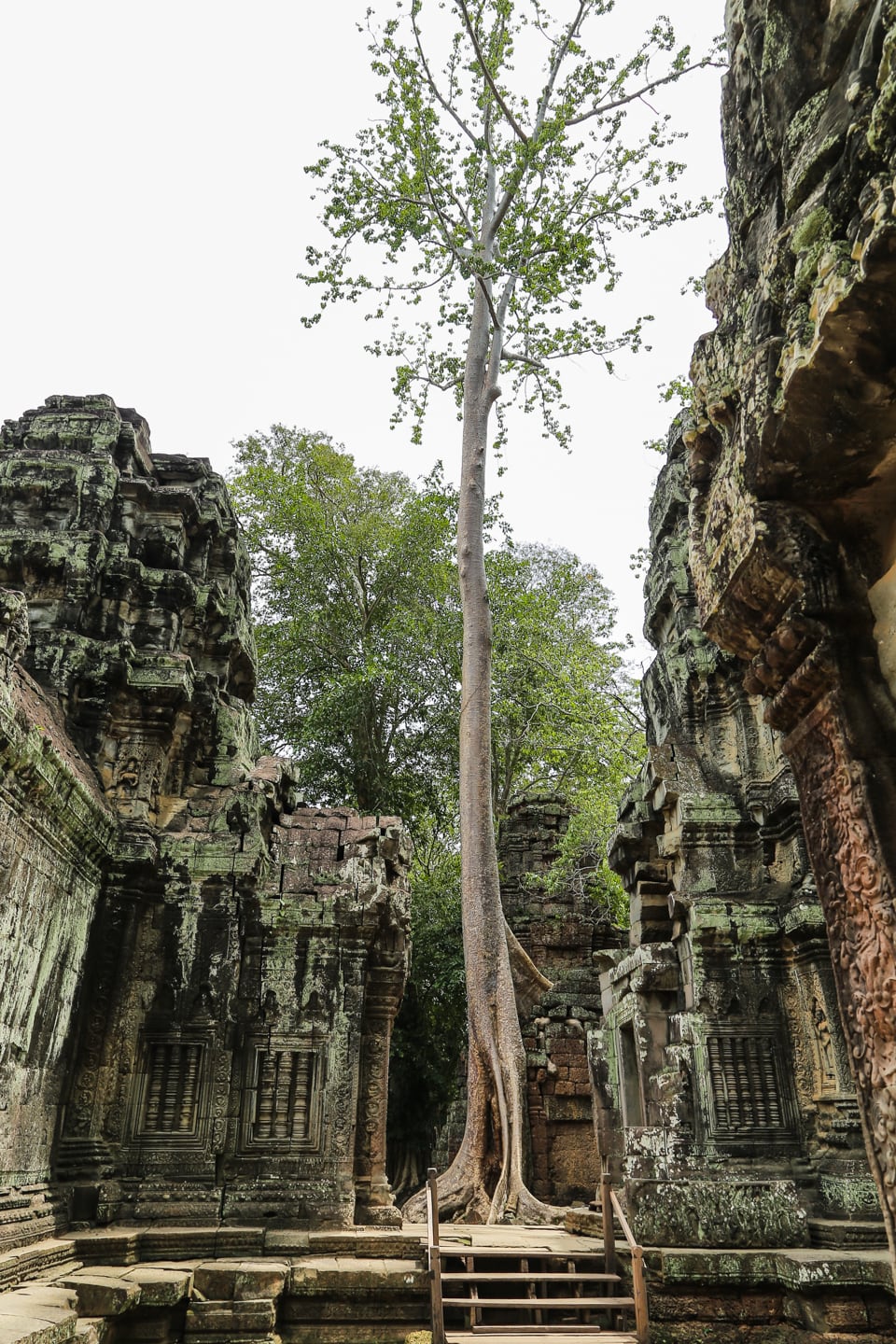 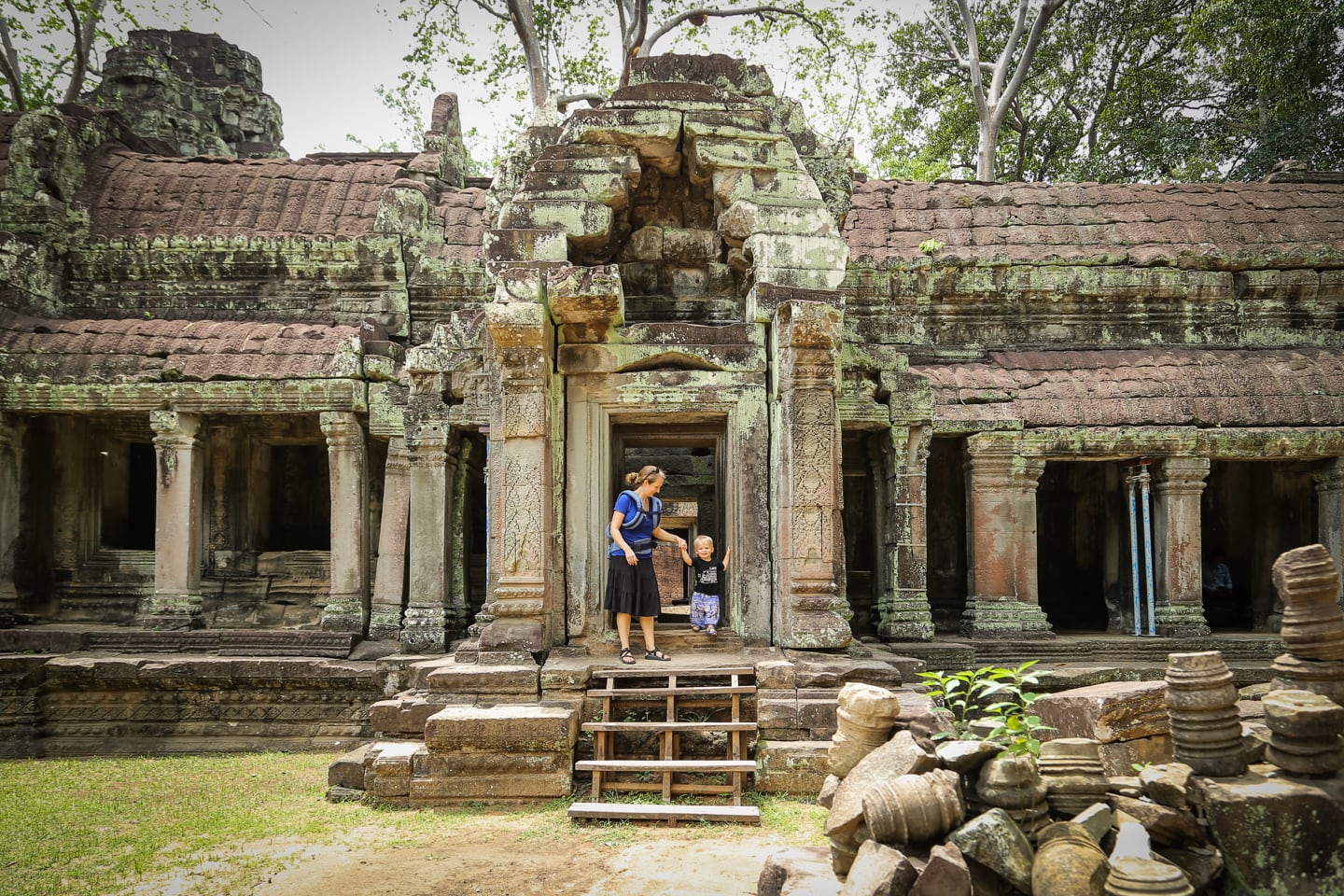 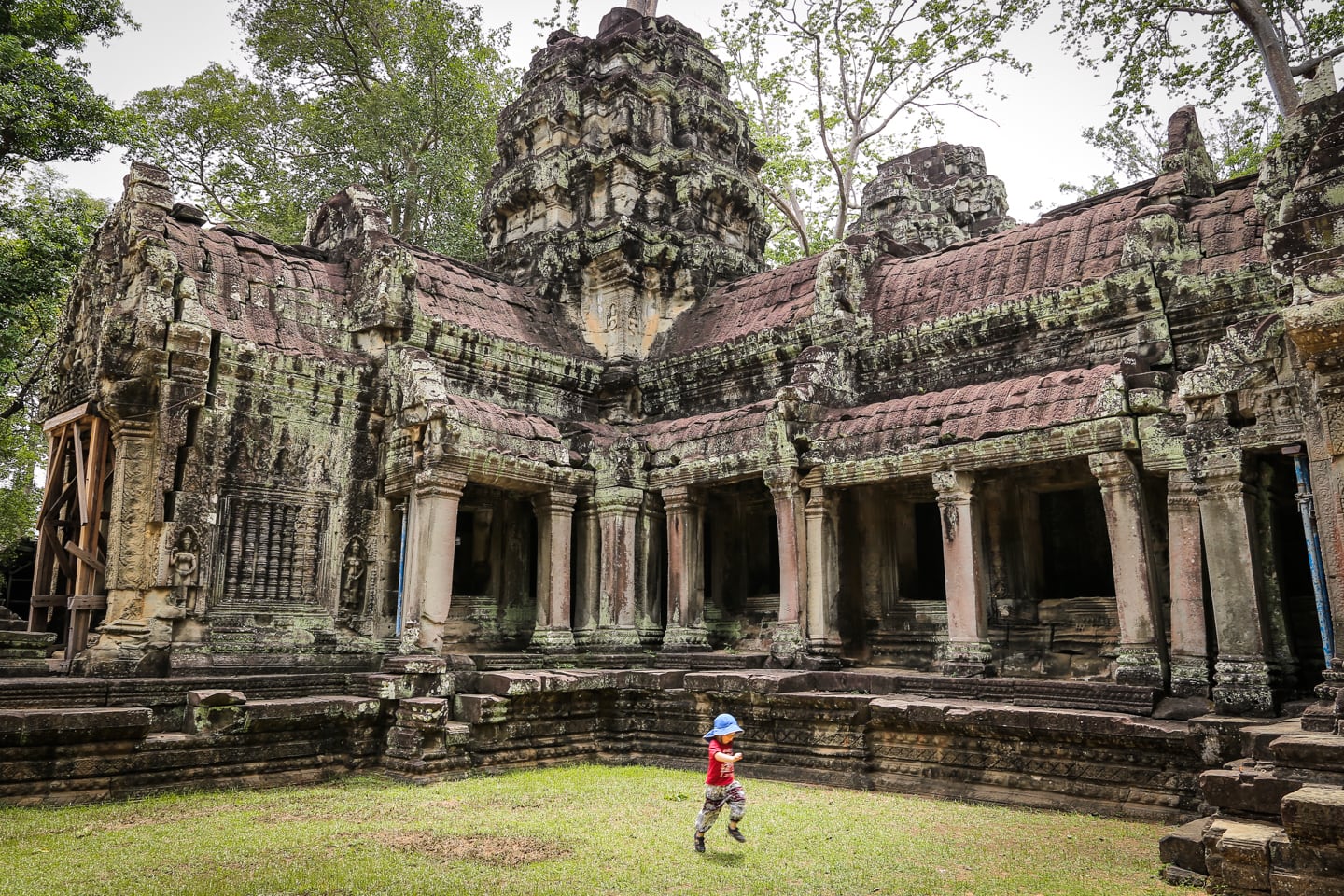 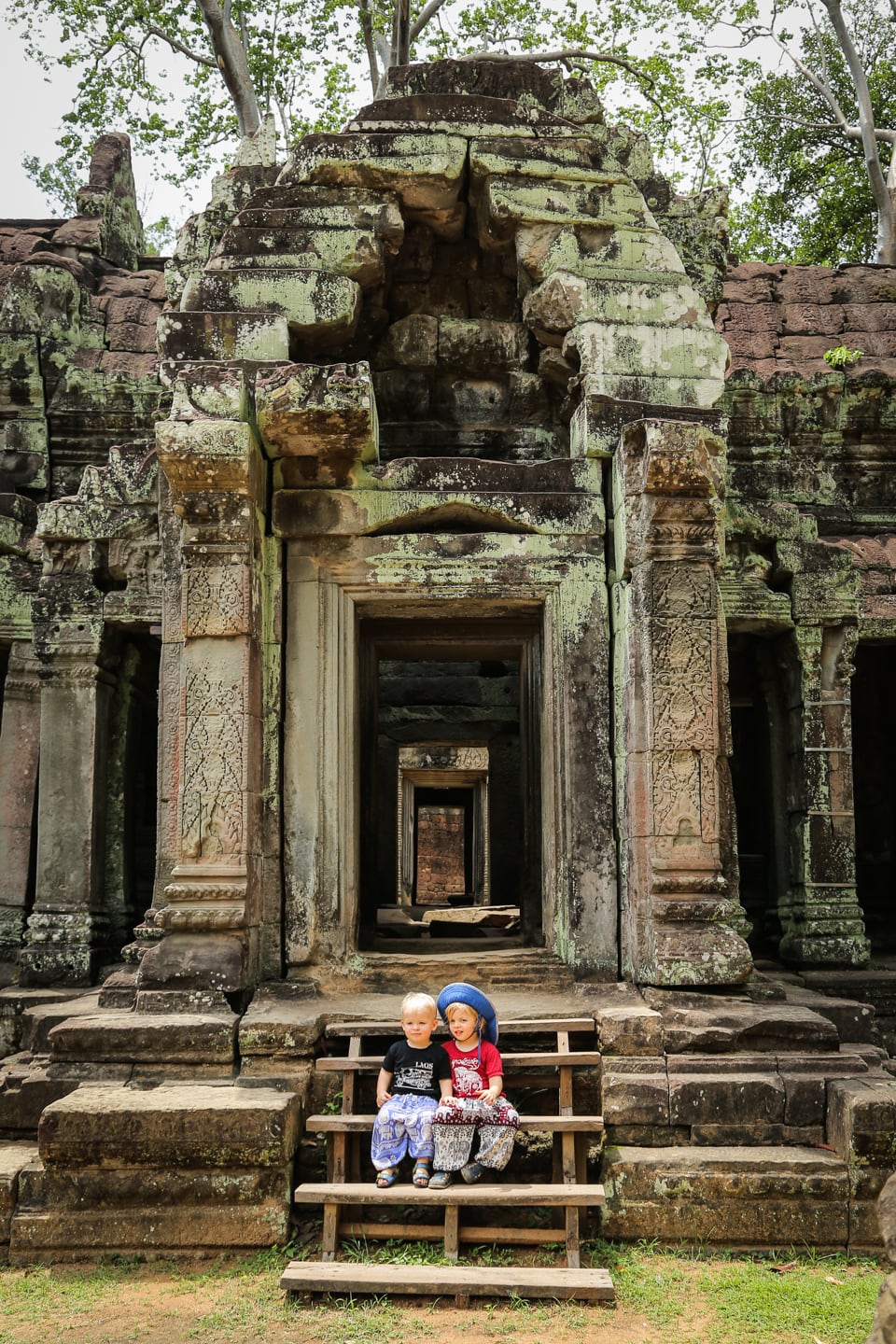 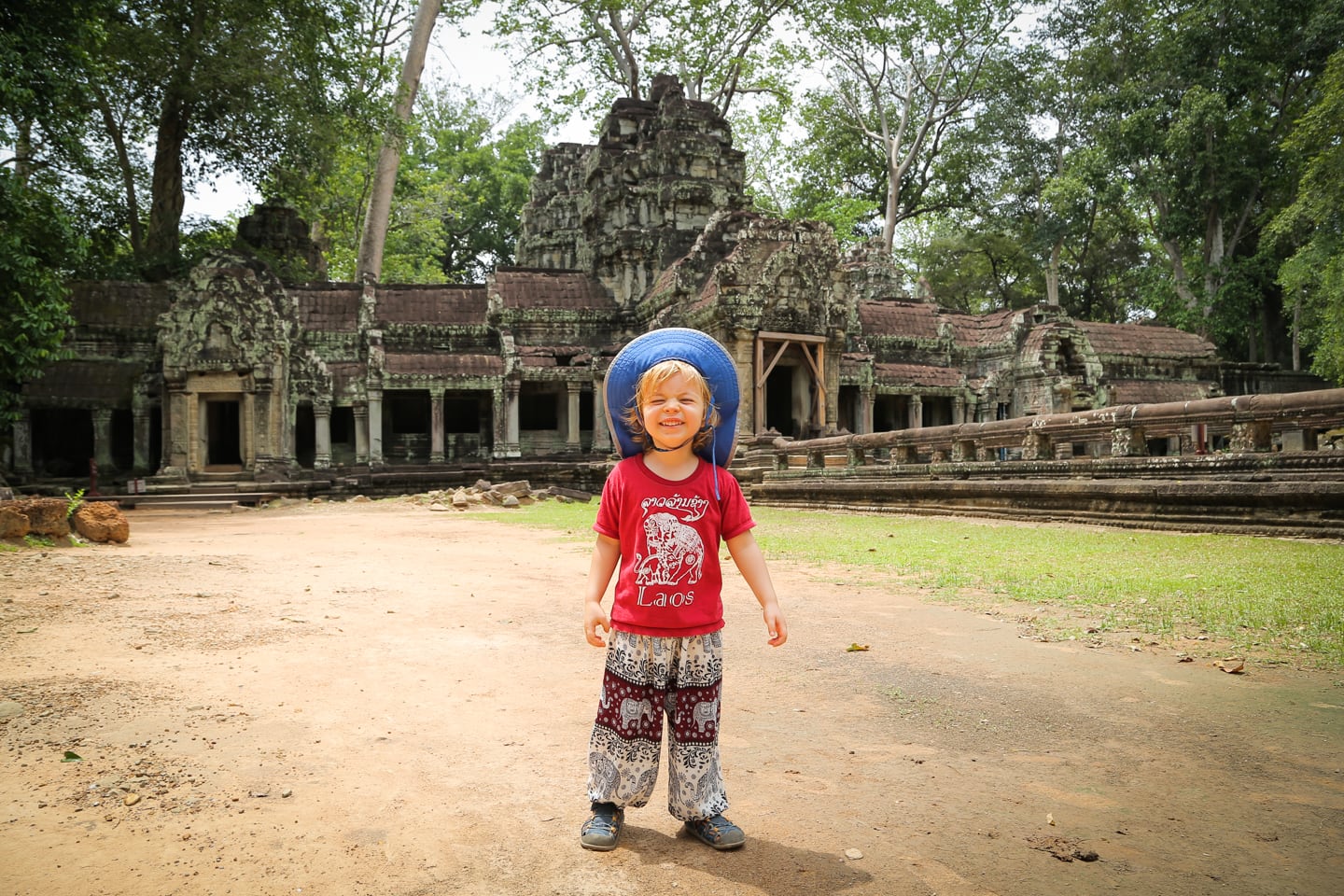 After a memorable morning of temple touring, nap time beckons for all.

Tomorrow, we plan to head to the massive Angkor Thom group and spend the morning exploring the “island” on foot. 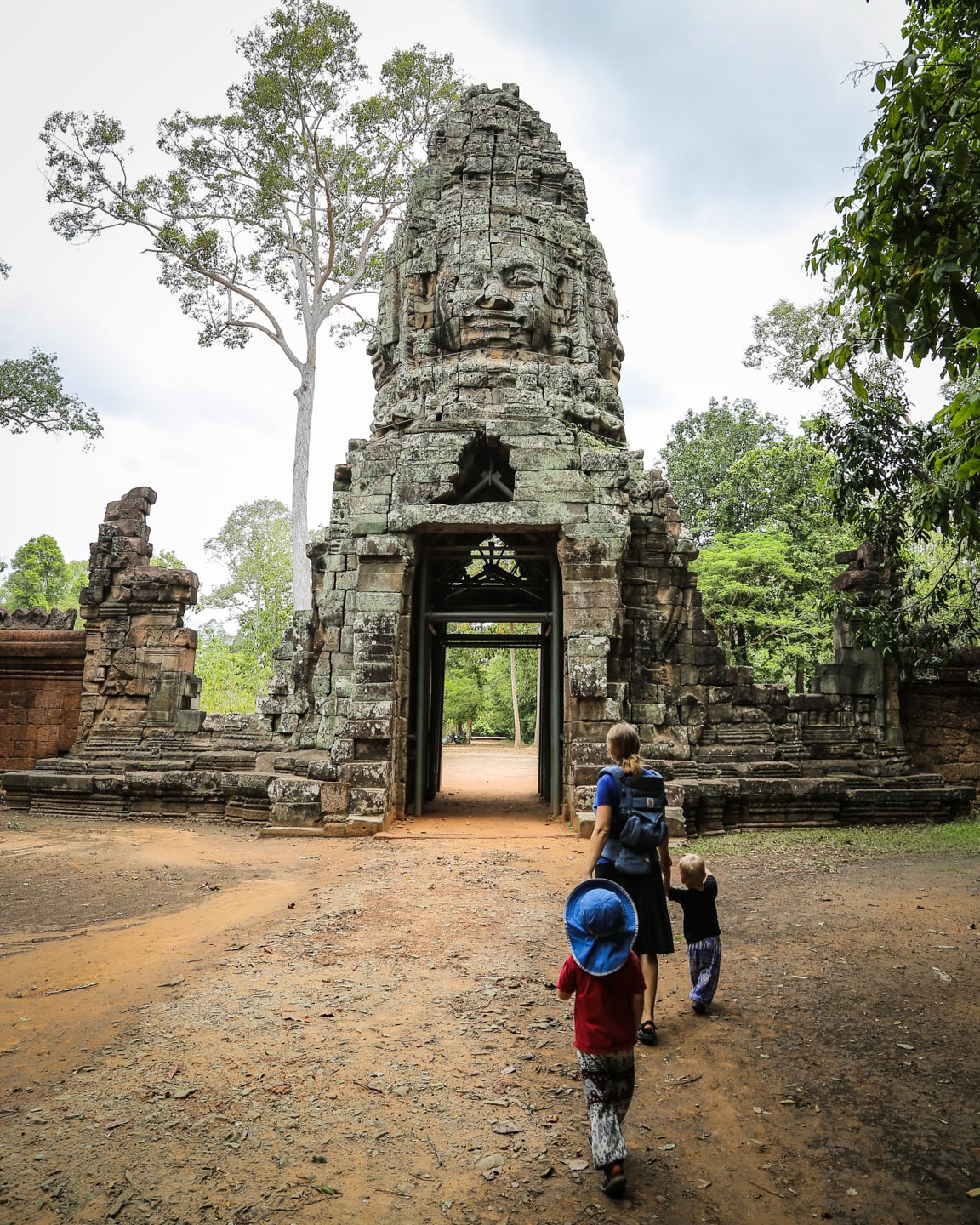 6 thoughts on “We Get the Tomb Raider Temple to Ourselves! Angkor’s Ta Prohm”